We had a reasonably good nights sleep in our Zurich hotel. A bed that was big, in one piece and a room that was the correct temperature! The constant wail of police sirens was interesting but we were tired so it didn’t bother us too much.

Astrid woke up fairly early so we decided to have breakfast and head out for some early sightseeing. Breakfast was in the next building (part of the same hotel). We went downstairs and immediately realised it was pouring with rain, dark and very cold.  At any rate breakfast was great, the best Swiss offering yet! Lots of lovely croissants and almond pastries, heaps of yummy breads, cheeses and meats and more yogurt and  jams and good coffee.  We ate plenty and decided to go back to our room and re-evaluate our plan for the day.

The weather forecast was not inspiring. It was currently 6 degrees, with heavy rain, and it was predicted to hit zero by lunch time, with sleet. Progressing to minus 1 and heavy snow by mid-afternoon.  The prospect of snow was exciting but it was pretty average weather for our only day in a city we really wanted to see.

Given it was only going to get colder we decided to rug up and put Astrid in the carrier with  the weather hood on and go for a walk around the old town and Bahnhoff Strasse.  We had to find a supermarket for an umbrella and started wandering the streets. It was too wet for many photos but it was still nice wandering around the river and looking at the lovely old buildings, cafes and restaurants.

We noted that the swans looked less than impressed with the weather and had their heads well and truly tucked up as the floated around.  At this point Astrid had fallen asleep in the carrier so we thought we’d keep walking and give her a rest. There were plenty of shops along Bahnhoff Strasse to look at. We saw lots of the posh stores had their Christmas displays up and we could see the lights twinkling through the grey and cold morning. 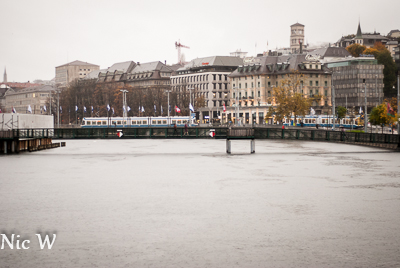 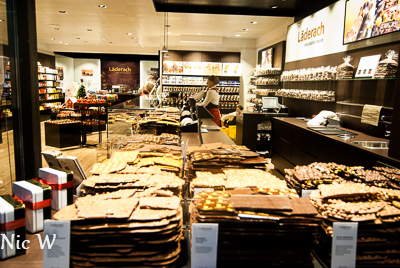 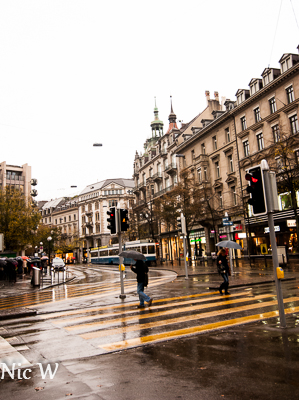 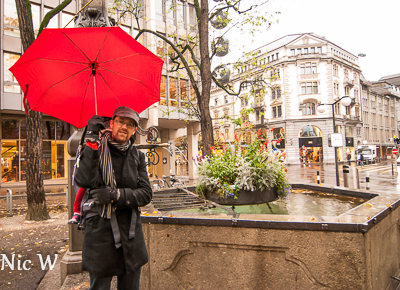 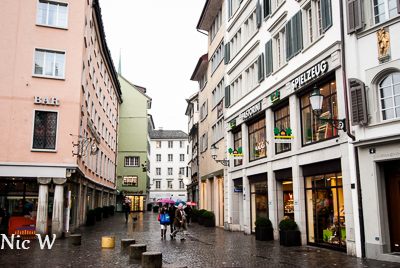 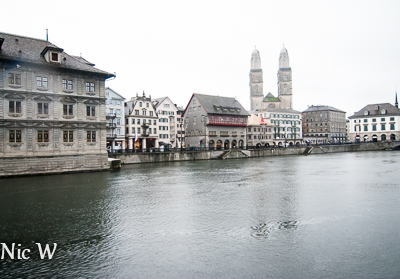 We sought out the toy store Franz Carl Weber, as it was meant to be awesome. Awesome it was. Four levels of toy heaven, anything a young baby or big boy could want.  We found heaps of things we loved. They have amazing wooden toys we just can’t get at home and we have seen them all over Switzerland. Most are Swiss or German and we really wanted to get Astrid some.  They also had spectacular model railways with replicas of all the trains we had been on. The were very impressive but not really the right age range for an Astrid. Anto enjoyed looking at them though. He was even more impressed with the model cable car/ski lift that we saw. We thought it was pretty cool, maybe when Astrid is a few years older we’ll need to come back. At any rate the store was huge, and had so many interesting things. One floor had a kiddy hairdresser, another a kids cafe and there were also areas where you could get dressed up and I think they had entertainers come in. In the end we did purchase some things for Astrid’s Christmas present, despite the dilemma of how to get them back to Paris as we hadn’t bought our spare bags on this part of the trip.  Astrid has woken up while we were in the store and was in wonderland. We didn’t let her out of the carrier though or it would have been more expensive. 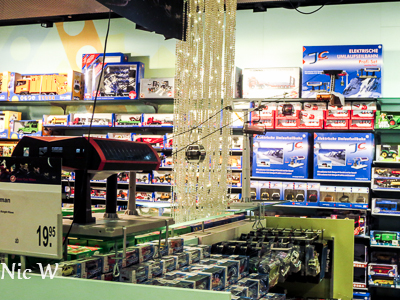 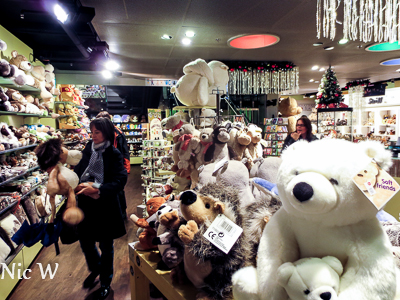 We then kept wandering around Bahnhoff Strasse and the old town but we were getting quite cold and very wet. We decided it was time for  a break and found a little cafe tucked in an alley that was quaint and very warm and cosy. The had the best hot chocolate, the first really good one we had while in Switzerland. They also had a delicious berry torte thing that we all devoured. 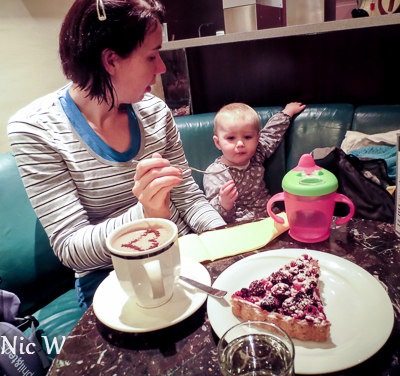 Feeling warmer we headed back to the hotel to change out of our wet clothes and stash the goodies from the toy store Anto was lugging. One of my boots is leaking and it’s not fun walking around in icy water. Astrid was also getting damp even in the carrier, so we put her in a snowsuit to keep her drier.  We then thought we  should grab some of the Swiss chocolate we wanted to take back with us. We had eyed off several things in Geneva but only bought small amounts as we didn’t want to lug it all through Switzerland. Of course the brands in Zurich seemed to differ and we couldn’t get exactly what we wanted but still managed to find a stash. We were not the only people at the store buying huge quantities of chocolate, other tourists appeared to be doing the same thing.

At this point it was about 2 degrees and sleeting and we were cold and rushing to get back to our hotel for check-out. We managed to repack the bags, stow our luggage at the hotel and although sitting in a warm cafe all afternoon seemed like the better plan we thought we should try and get some more sightseeing done.

Wandering around and taking photos was pretty much impossible but the zoo had great reviews and apparently had several indoor exhibits. So what do you do when it’s zero degrees and snowing, why you take your 16 month old to the zoo! It sounded like a mad plan but apparently it’s not unusual to go to the zoo in those conditions. The tram was full of people heading that way and when we got there there were a ton of young children and babies so we weren’t the only crazy ones.

On the way up the hill in the tram we noticed the sleet was now definitely snow and was starting to settle on the ground in big clumps. It was very pretty but rather cold.  The zoo was covered in snow and it was going to be an interesting visit!  We decided to have lunch first up. Expecting pretty average food from their buffet restaurant we were surprised at the array of hot and cold options (including scrumptious desserts) for a very reasonable price. Astrid and Anto mostly shared more bratwurst and chips but I got a salad bar plate, which incidentally was an awesome salad bar with so many options I couldn’t fit them all on (and they were all yummy) and Astrid and Anto both had some salads too.

Ready for zoo going we headed out and noted that there was a thick covering of snow everywhere. Many of the animals are moved into heated areas over winter so not all the displays were running. The animals that didn’t get moved inside all had shelters and most were using them.  We loved the flock of pink flamingos standing in the snow and the tigers standing on their rocks with snow drifting on them. We should also point out that our alpacas are very soft and get coats when it rains or is a bit cold. The zoo alpacas were out in the snow, being hard-core. Take note Inti and Chimu, harden up Zurich style!

It was very cold and we skipped a lot of exhibits and decided to head for some indoor ones. The monkey/ape/gorillas were fantastic and there were throngs of children in the exhibit being entertained by all the cheeky primates. Astrid thought they were hilarious as they rolled around and garnered for attention. They also had massive gorillas who were telling off the younger gorillas.

We headed to the African exhibit to see some of the toucans, ant eaters and lemurs.  They had animals I’d never seen before and we were enjoying seeing some of them but Astrid was getting a bit over it. We distracted her with the penguins for a bit  But we decided to skip the rainforest exhibit as she wasn’t keeping her mittens on and was getting cold and tired. The zoo was really good and on another day when it was less cold and/or Astrid was less tired we would have spent longer there. 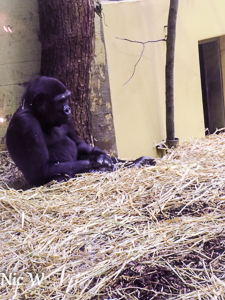 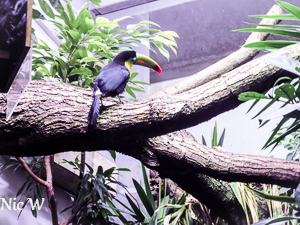 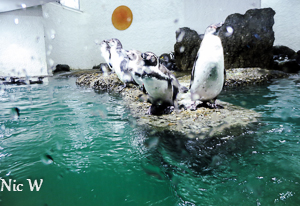 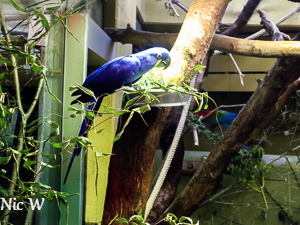 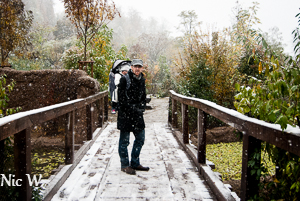 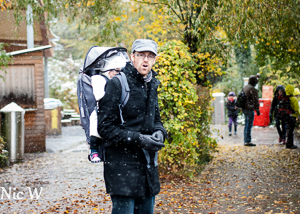 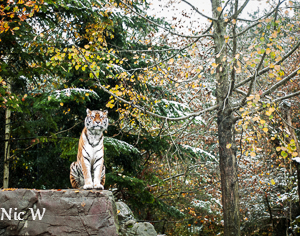 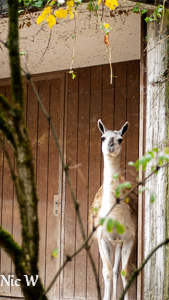 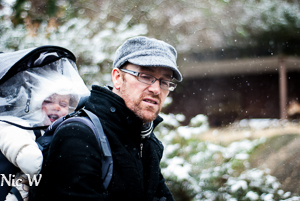 We headed back on the tram with a cranky bub and found a cafe to have a coffee in to warm up. We had been planning on riding the funicular but it closed early on a Saturday so we gave it a miss and just hung outside inside in the warm for a bit. steeling ourselves for hauling our luggage down to the train station. Astrid was pretty dry in her suit but wasn’t keen on leaving her mittens on so was getting cold hands and face and we were getting wet through our coats, gloves, hat and boots and it was pretty miserable. We got back to the hotel, loaded up and walked to the train station in the snow.

The train station was bitterly cold but we quickly found our platform, which thankfully wasn’t too far away. Anto grabbed us some dinner for the train and Astrid’s milk while we tried to stay warm waiting for the train. It was snowing on the platform which would have been cool if it wasn’t so damn cold and miserable.  This train leg was the only one that we weren’t able to book with our Eurail pass and it meant we couldn’t get first class cheaply so we were relegated to second, which would have been OK but it was a four hour trip and we ended up in a small section of cabin at the front of the train that was pretty full. Most of the passengers looked pretty unimpressed about a baby being in the same cabin but they were all good about it except one woman. She spent the whole time glaring at Astrid and giving us looks when she was playing up. She ended up storming off to first class, which was next door. We felt like dobbing her in to the ticket inspectors but restrained ourselves.

Astrid had dinner on the train and we got her changed and settled for sleep. She mucked around for about 40 mins, not wanting to settle and being a bit naughty but she wasn’t too bad. She eventually fell asleep on me and I managed to keep her snoozing for 2.5 hours until she was woken up by the above cranky lady who came back into our cabin 10 mins before we arrived into Paris, slammed the carriage door and then was filthy about Astrid waking up and screaming hysterically.  I had every intention of keeping her asleep til the last minute so it was her own fault.We gave her dirty looks but to her credit Astrid still waved ‘bye bye’ to her.

The best bit of the train ride was, as we were leaving Zurich, the sun was setting and the train was hurtling through the snow drifts and you could see the fields and houses covered by snow, glittering in the twilight. Even the locals aboard the train were taking photos, as it looked very cool.
The train was very efficient and we reached speeds of 317km/h which would have been more fun if not holding a small sleeping child. 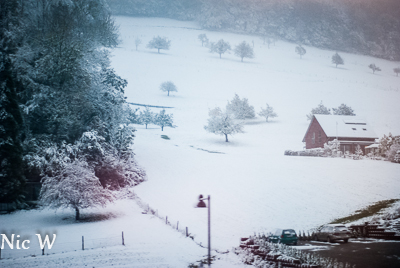 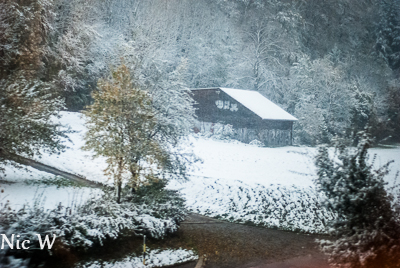 After 4 hours we arrived into Paris, grabbed our gear and trudged through 2 metro rides and a bit of a walk back to our apartment. It only took us 30ish minutes to get back and we were weary and cold (Paris was chilly too) but it was an efficient trip back. We collapsed into our beds and got Astrid resettled pretty quickly and had a fairly good nights sleep, all tired from a long and very cold day!