Every year the Canberra Balloon Festival takes place in March.  When I was younger I went most years and remember lots of cold and early starts, people all rugged up and eating breakfast watching the balloons inflate and take off. I hadn’t been in years though. I did think about taking Astrid last year but she was only 9 months and I figured she wouldn’t get much out of it.

This year she was almost 21 months and loved all thing balloon so we decided to take her out and see what she thought.

The Festival started over the Canberra Day long weekend but we avoided all 3 days as it was likely to be very busy.  The Wednesday after the long weekend had a good weather forecast so we planned to make an early start and see if we could catch some balloons.  We told Astrid the night before we were going to see the balloons in the morning and she seemed intrigued.

The balloons start inflating from 6am and usually launch around 7am. At 5.30 we checked the weather forecast and their likely location only to find out that they probably weren’t launching from the usual spot near the lake due to wind conditions. We didn’t find out exactly where they were launching from though other than a helpful ‘West of Lake Burley Griffin’. At any rate we got the munchkin up at 6am, she had a cup of milk, got dressed and jumped in the car.

We decided to drive around and see if we could find the launch site. Of course it was still quite dark. There was a lot of traffic near our house, an unusual amount for that time of morning and we wondered if they were heading to the balloons. We followed some cars for a bit but didn’t find the balloons and headed towards the lake, keeping our eyes out.

Once we got the Lake launch site we found there were a few of the tethered balloons inflating but the majority were taking off that day from Stromlo, right near our house. It turns out most of those cars were probably going to the balloons and we had just missed the location in the dark.  Undeterred we decided to show Astrid some balloons inflating.

Because it was quiet there was plenty of opportunity to learn about the balloons and the kids were allowed to touch them and run under them. Astrid thought it was fabulous! After we watched one inflate we headed over to get some breakfast of pancakes and coffee and see the two or three other balloons there that morning.  Astrid was quite content to watch them all from her dad’s shoulders while eating her turkey and cranberry sauce sandwhich for breakfast.

Anto had to head off to work so Astrid and I drove up Red Hill to see if we could locate the other balloons that should have been heading in that direction. We did find them but they were back over Tuggeranong and I decided by the time we got to them there wouldn’t be much to see.  Instead we headed home with promises of finding ‘more balloons’ the next day.

Thursday morning was another beautiful Autumn morning. The balloons were supposed to be launching from near the Lake, so we got up even earlier and headed over that way.  It was still dark when we arrived, and there was quite the crowd and plenty of balloons of all shapes and sizes already inflating. 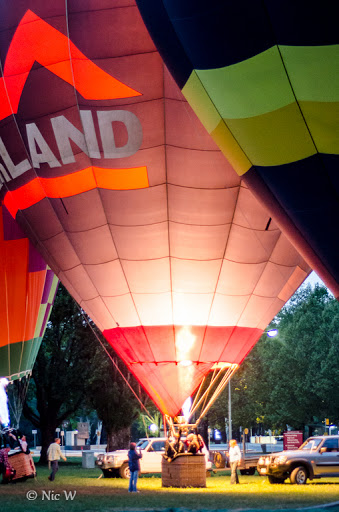 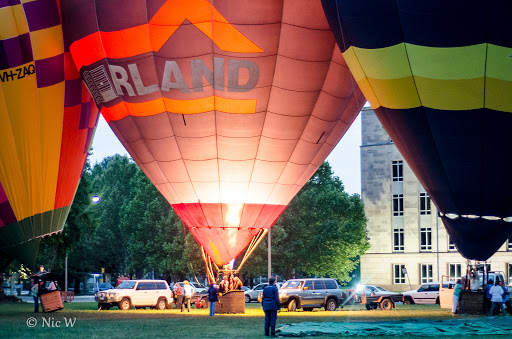 We headed over the find the more interestingly shaped balloons that we hadn’t seen the previous day. Sure enough, Darth Vader and the giant peacock were particular favourites of Astrid’s.

Before it was even 7am, the balloons started launching, and all of a sudden the sky was filled with balloons and colour.

Darth Vader did look quite cool, hovering above the crowds………. 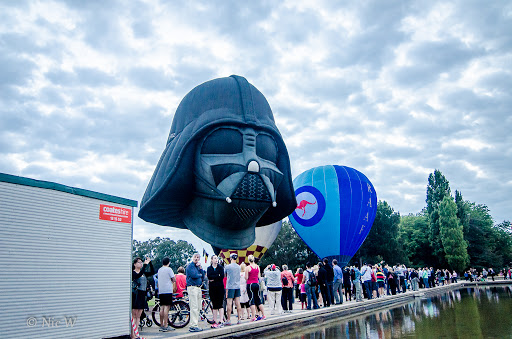 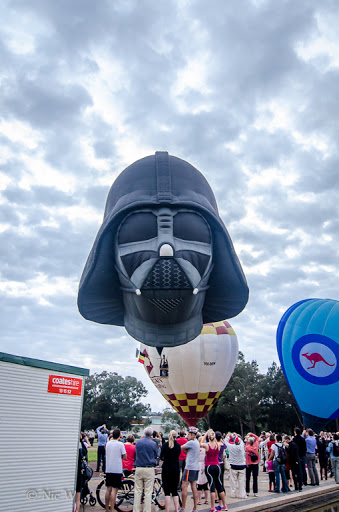 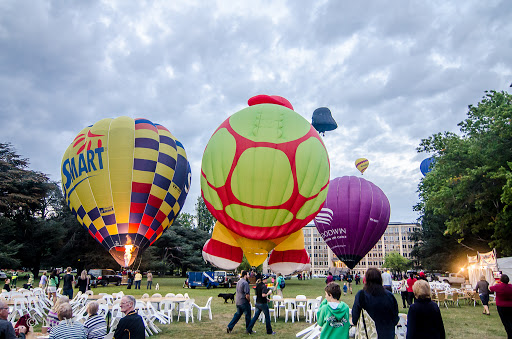 Then we headed over to watch the giant (and very cute) turtle, Bup, inflate. Astrid did seem to particularly like him.

Finally we watched the last of the balloons take off over the Treasury building before we headed of for some early morning Dutch pancakes and coffee, where the lines were much longer than the day before!  It was time for Anto to head to work, and no balloons were left, so we headed home. Astrid was still keen for more ballloons, but there is always next year!