Australia day marked the last day of our trip, and when in Paris, you might as well spend it eating…….and shopping!  We had a late flight out that evening so needed to fill in the day and stretch our legs before the 36-odd hours of travel home.

Thankfully the kids took the hint about the long day and Soren wasn’t up until 8am, and Astrid after 9am! We had to be out of our apartment by 12pm so we decided to head out for a couple of hours shopping and then be back in time to do the final pack up, before filling in the afternoon.

Alan was skipping the shopping and having a restful morning and Mikl was off doing his own thing, so Anto the kids, and I decided we needed one last morning of patisserie treats, so stopped past a boulangerie on our street that we hadn’t tried before. We procured some pain au chcolat, pain au pommes, and some delicious dark chocolate bread concoction that required pointing from us, but was amazing.  We ate while walking but were soon full of chocolate and sugar goodness, and the kids were wearing their fair share too! I didn’t have the camera with me, so didn’t even get a picture of the deliciousness.

The first shopping stop on the agenda were 2 of our favourite kitchen shops in Paris, where we purchased new copper pots, and chocolate and cake moulds that you just can’t get in Australia.  It was lucky we were on a limited timeframe, or we would have bought more!  There was then just enough time for a quick look through Les Halles, the underground shopping mall, and a few more purchases.

Anto had cleverly restricted our shopping to the last day or so, meaning I had far less time to fill up the suitcases, than I would have liked.  We still did alright though.  On the short walk from Les Halles back to the apartment we picked up some fresh baguette so we could lunch while doing the final pack up.

Since we had a fridge full of tasty French butter, cheeses and tomatoes, we made some lovely baguettes and had the apartment spick and span in time for our 12pm eviction.  The apartment owner had arranged for us to leave our copious number of bags in the office of some poor guy who worked near the apartment building.  I think our bags nearly filled the tiny office, but it meant we didn’t have to traipse around Paris with them all afternoon, so we didn’t care.

We figured we’d let the kids burn off some energy at Les Halles park one last time. This meant walking past our very favorite kitchen shop one last time, but we resisted the urge to buy more heavy things! While the kids were playing and being supervised by Anto and Alan, I did run into the Les Halles shopping centre one last time but the place is so enormous that I could might have spent the whole afternoon shopping, and thought it would be better to get back to the eating and sunshine! 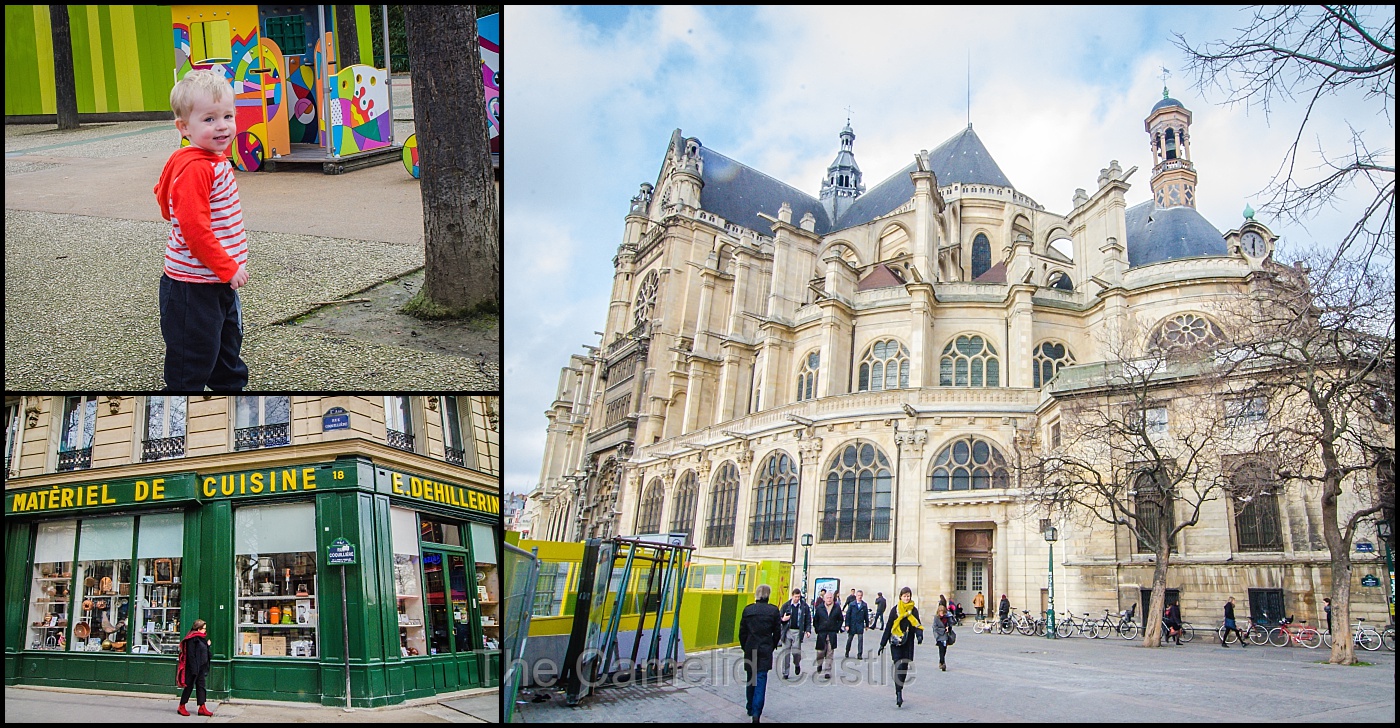 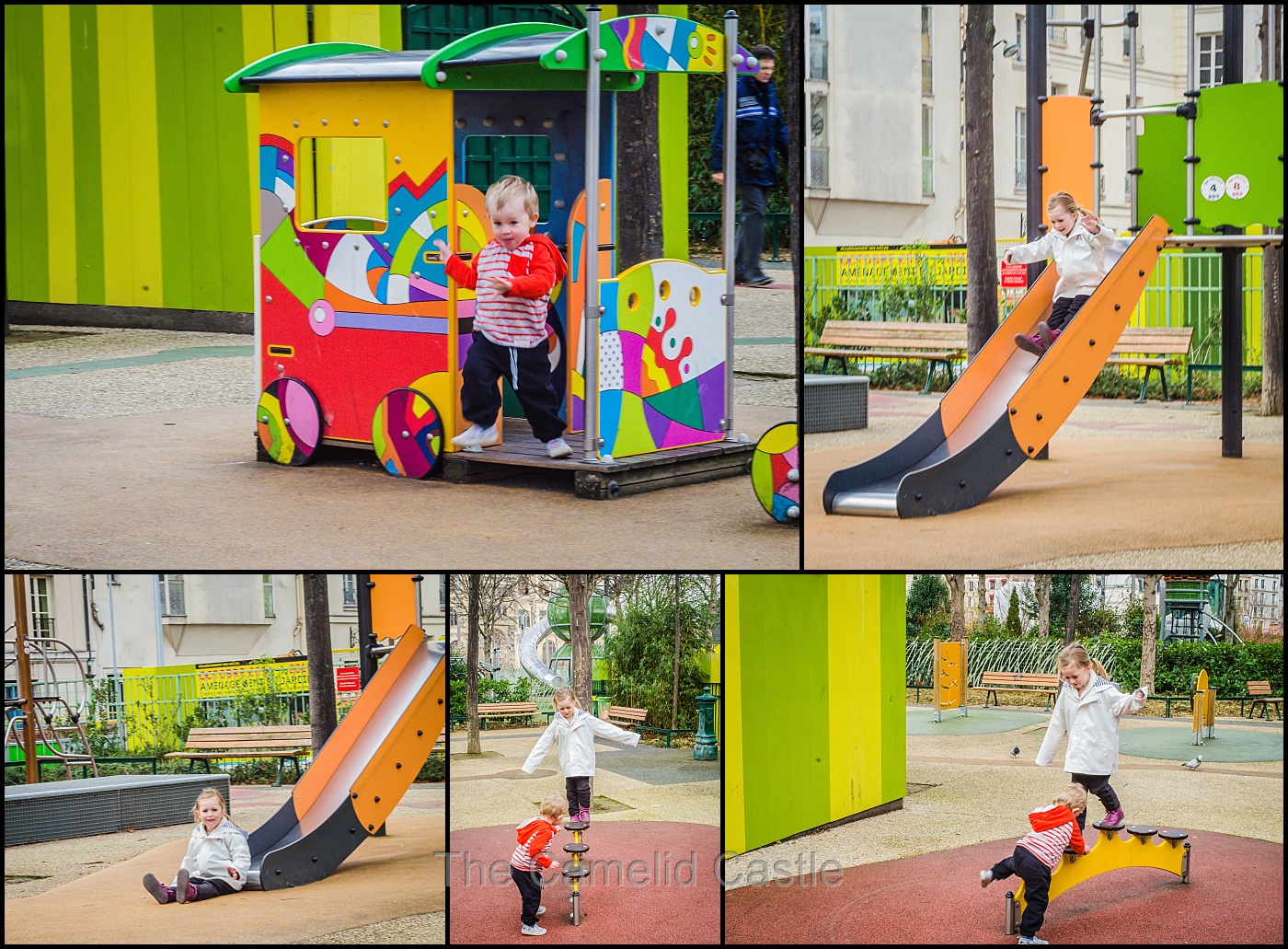 The kids didn’t want to leave their beloved park, but we lured them with the promise of crepes and carousel rides, so they didn’t protest too strongly!  We walked down across the Seine and towards the Conciergerie and Notre Dame, in search of crepes. It was another lovely Winter’s afternoon in Paris. 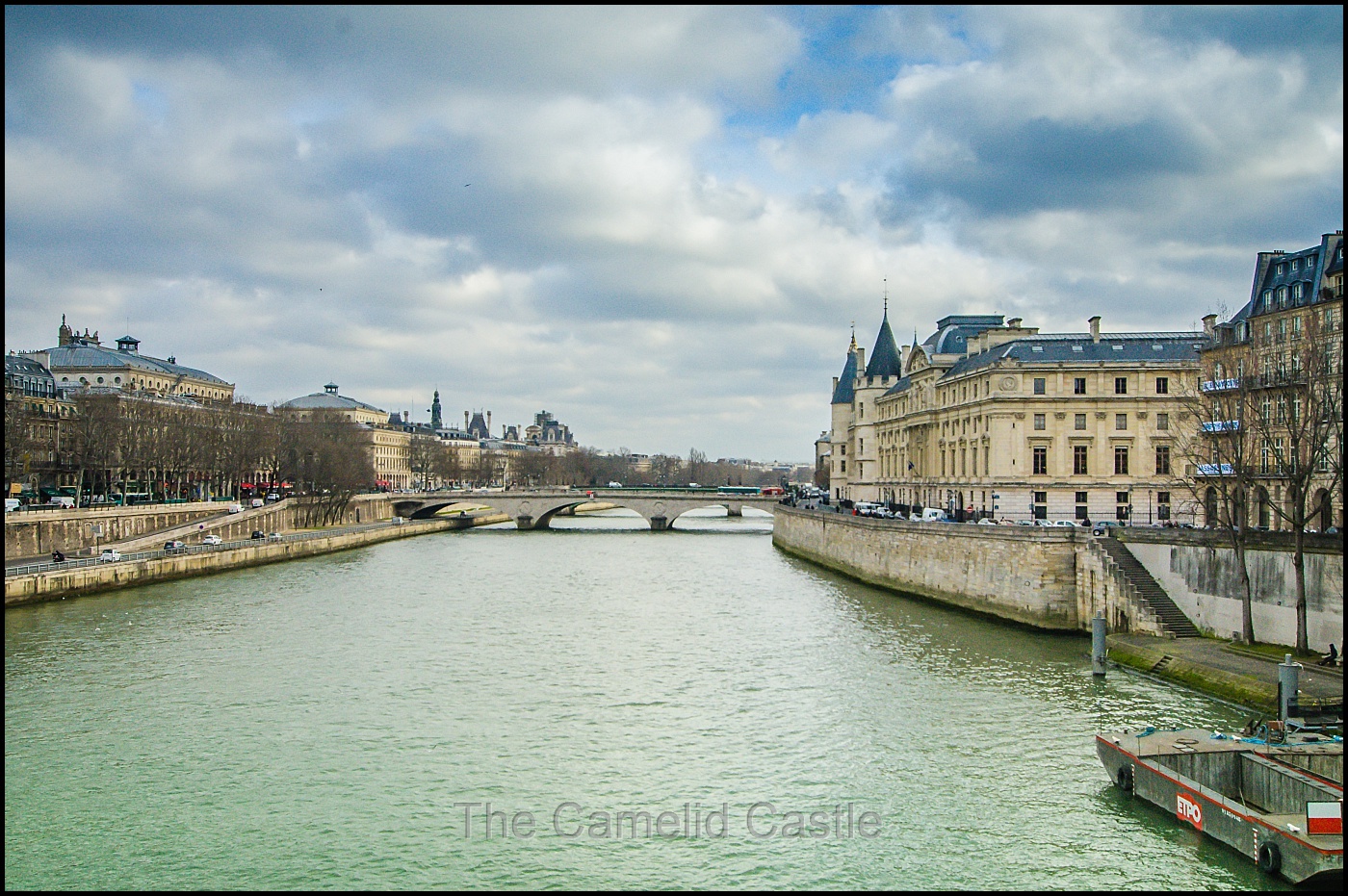 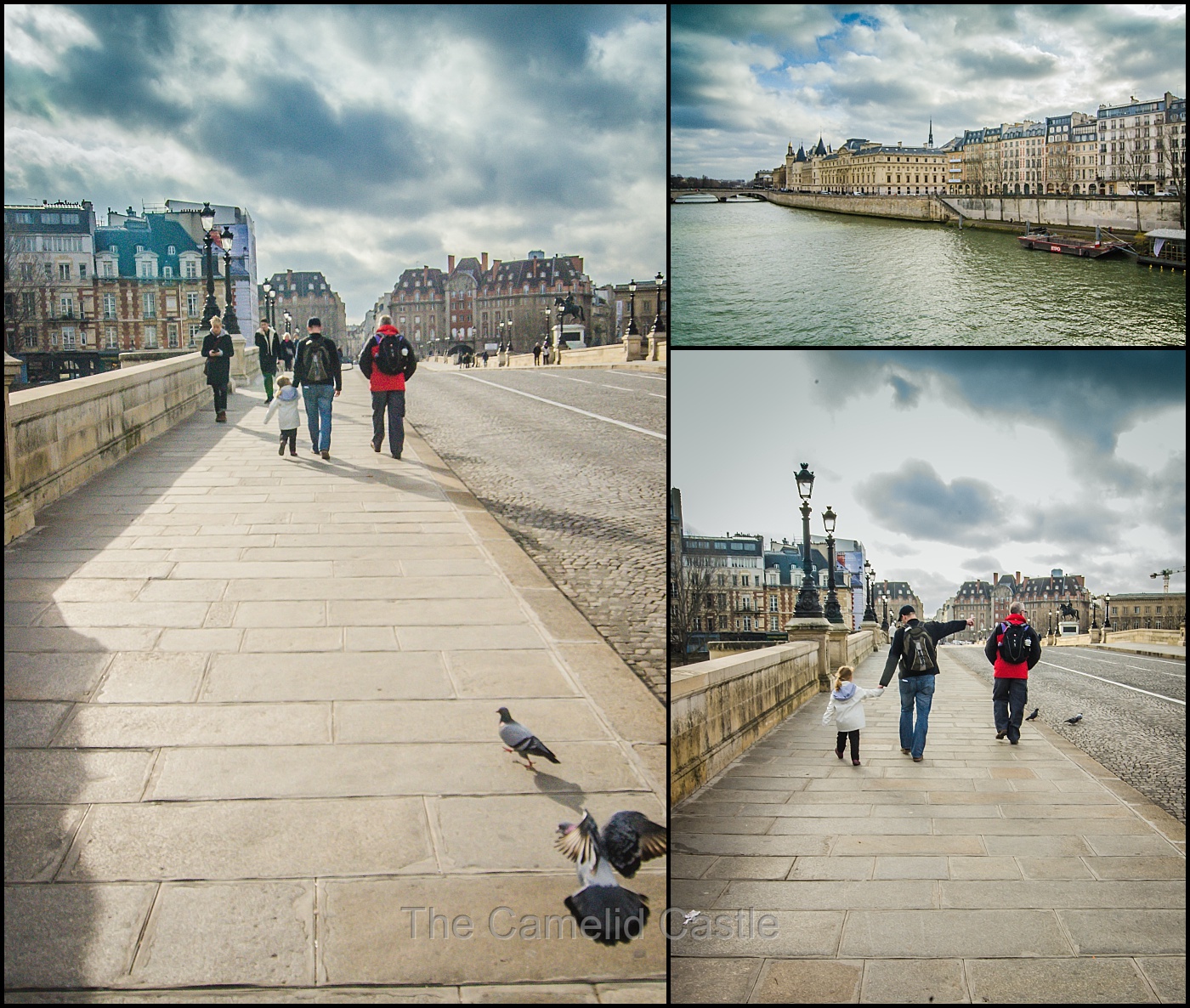 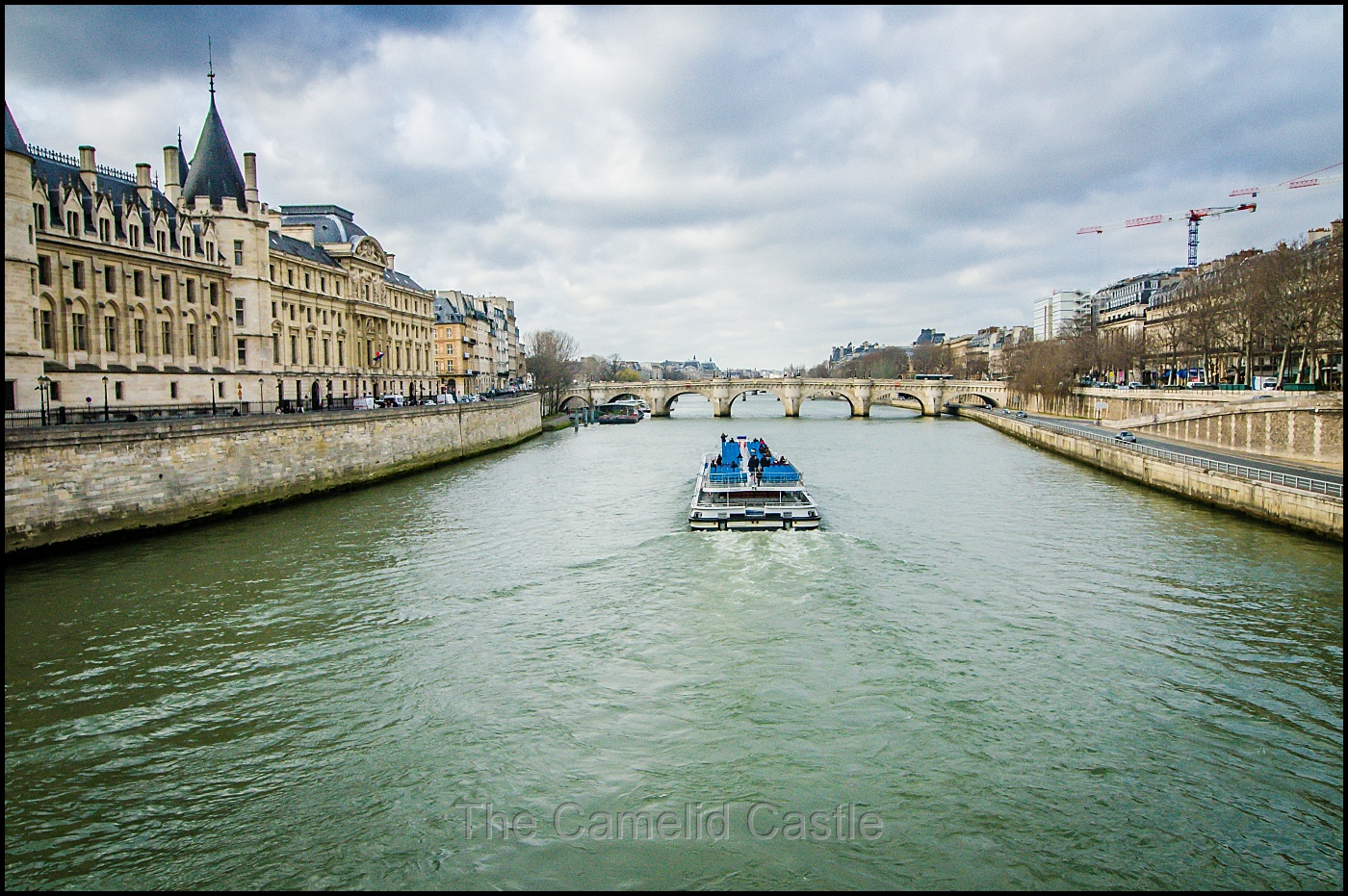 We located a cafe that looked incredibly busy, so we figured that was likely to lead to better crepes than the previous days effort.  It turned out to be a very good choice of cafe, and I had salted butter caramel crepes, Alan had grand marnier crepes (which the waiter had to flambé of course). The kids had their favourite nutella crepes, and Anto decided not to crepe it up, and instead had an icecream sundae doused in rum and cream.  Alan and I figured it was going to be a long couple of days travelling so washed our crepes down with delicious vin chaud.  All of it was very yummy. 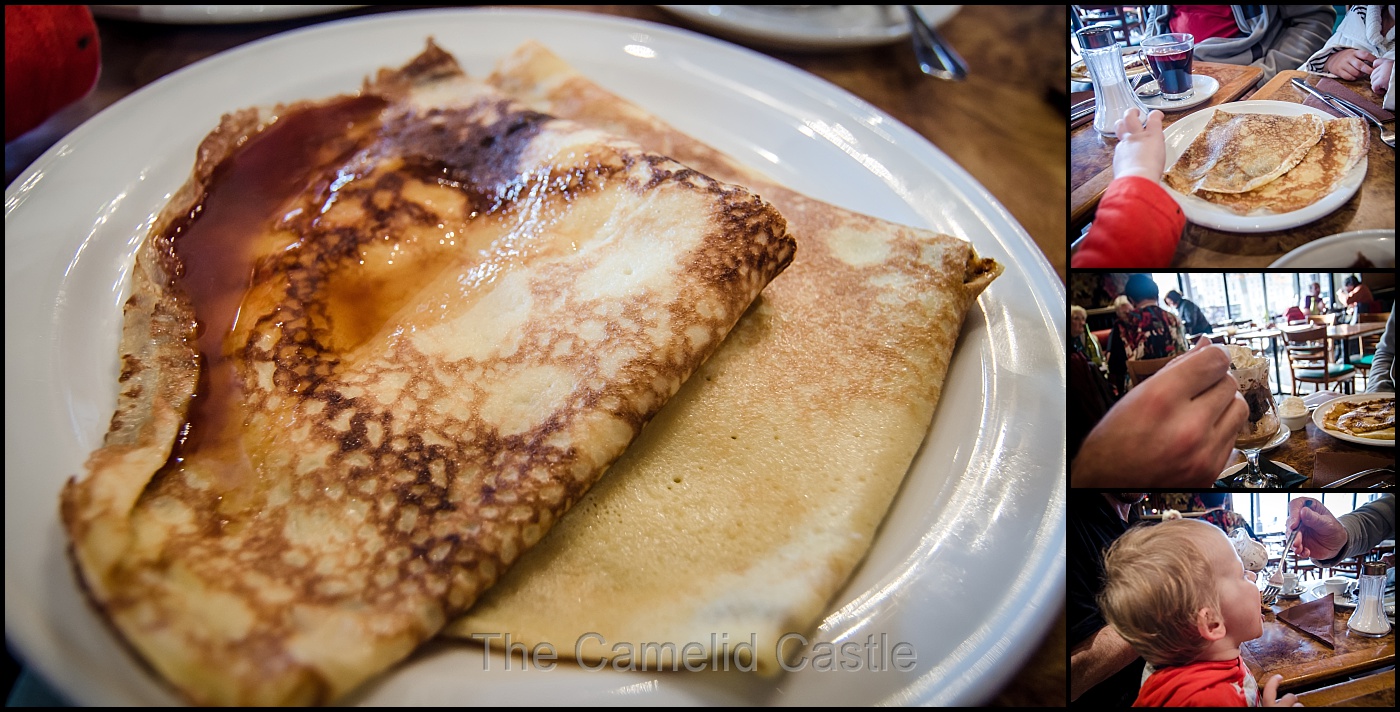 Now full of yummy French food, again, we walked back to Hôtel de Ville so we could give the kids their long-promised carousel ride.  We were now at the point that we were trying to use up all our spare Euro coins, so we bought 10 Euros worth of ride tickets and let them loose.  Being a Tuesday, it was very quiet so they got their pick of horses/animals/cars/motorbikes to ride on, and swapped a few times over the various (and long) rides.

Both kids had a ball and it was a good way to fill in time, while keeping them happy……. sadly though our ride tickets ran out, and Soren was not impressed.  He had a huge tantrum when made to get off, I think he though he was going to get to spend the entire afternoon on the carousel! 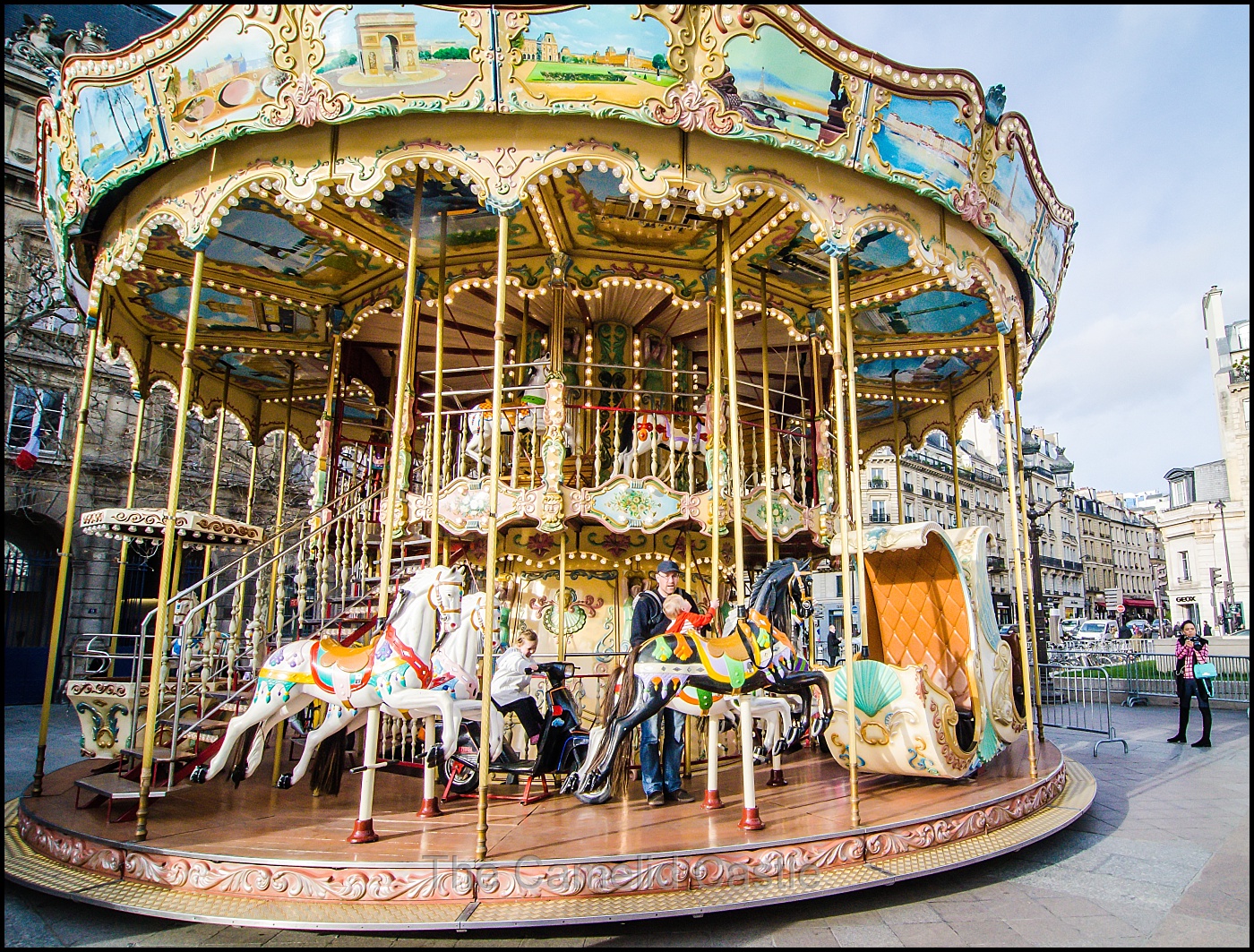 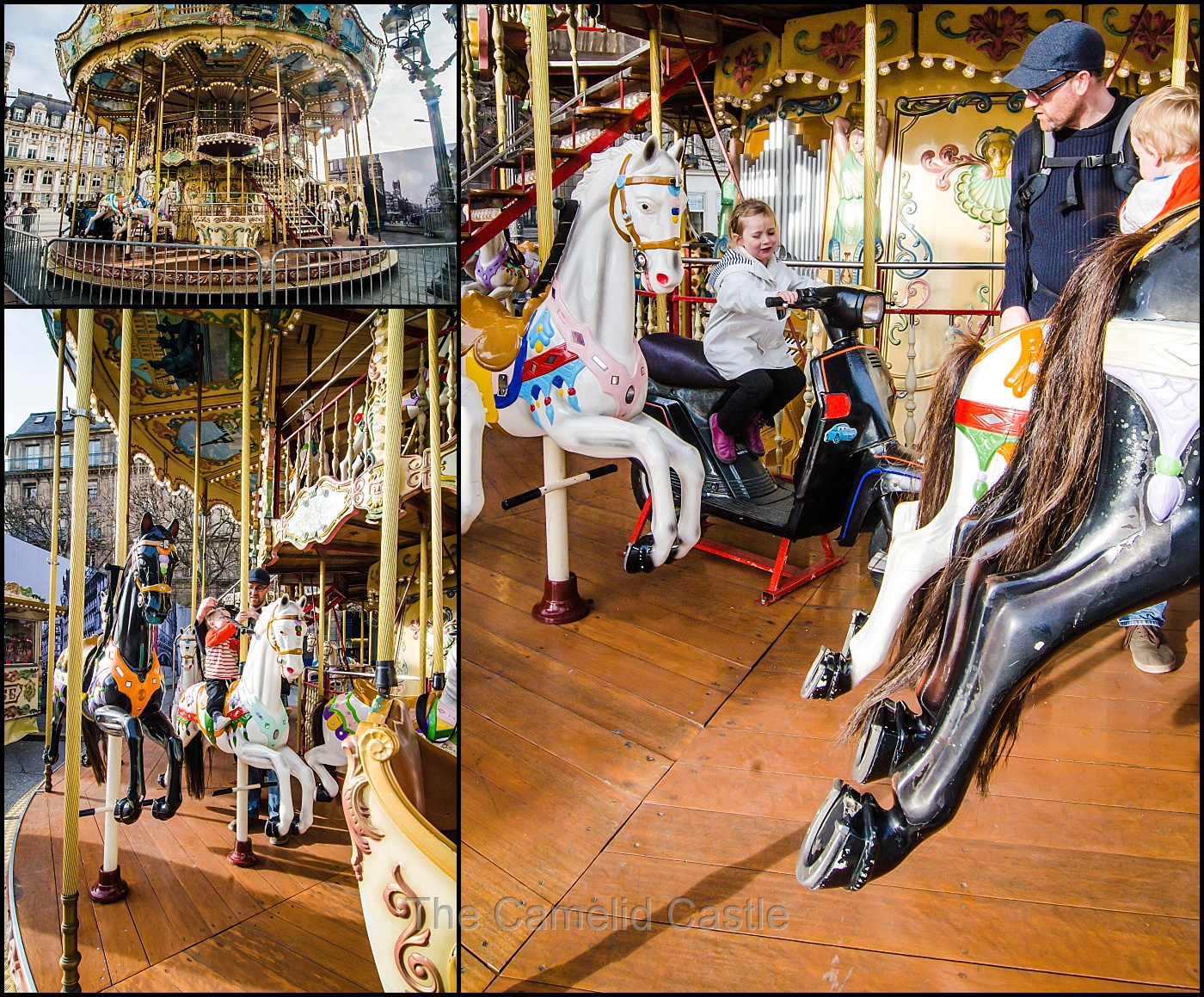 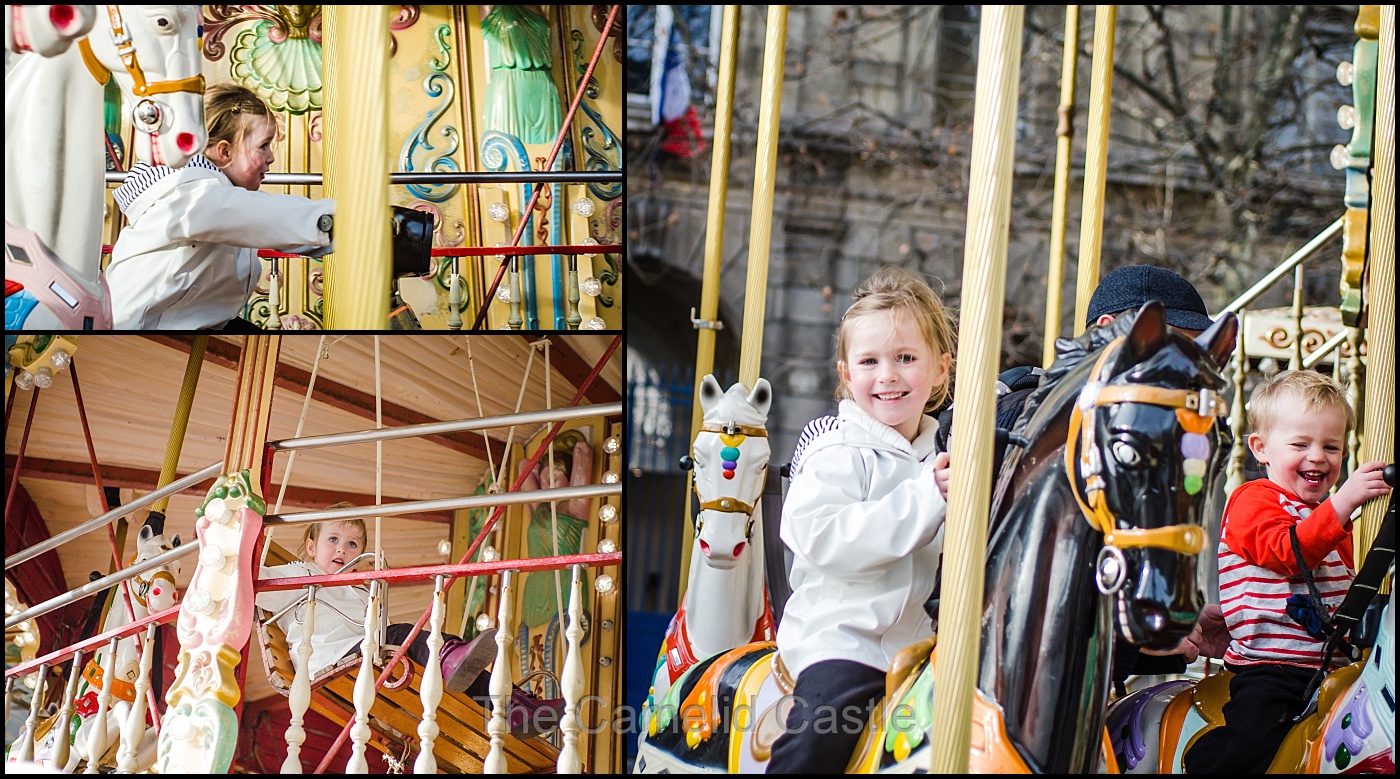 With a very tired and rather grumpy Soren, we still had a couple of hours to kill before heading to the airport. Eating again so soon wasn’t a good idea, so luckily Anto decided he had a desperate need for some dodgy Paris souvenirs.  We decided to head in the direction of Notre Dame where we knew there were multiple options for souvenir shopping (there are plenty of dodgy stores strewn all over Paris and we’d walked past lots of them in our travels).

This meant another walk across the Seine – yes we were walking in circles- but we didn’t really care as the river was looking pretty and we knew that we were about to be sitting down for the best part of 2 days!  We did get to watch some boats go past, including some enormous house boats. 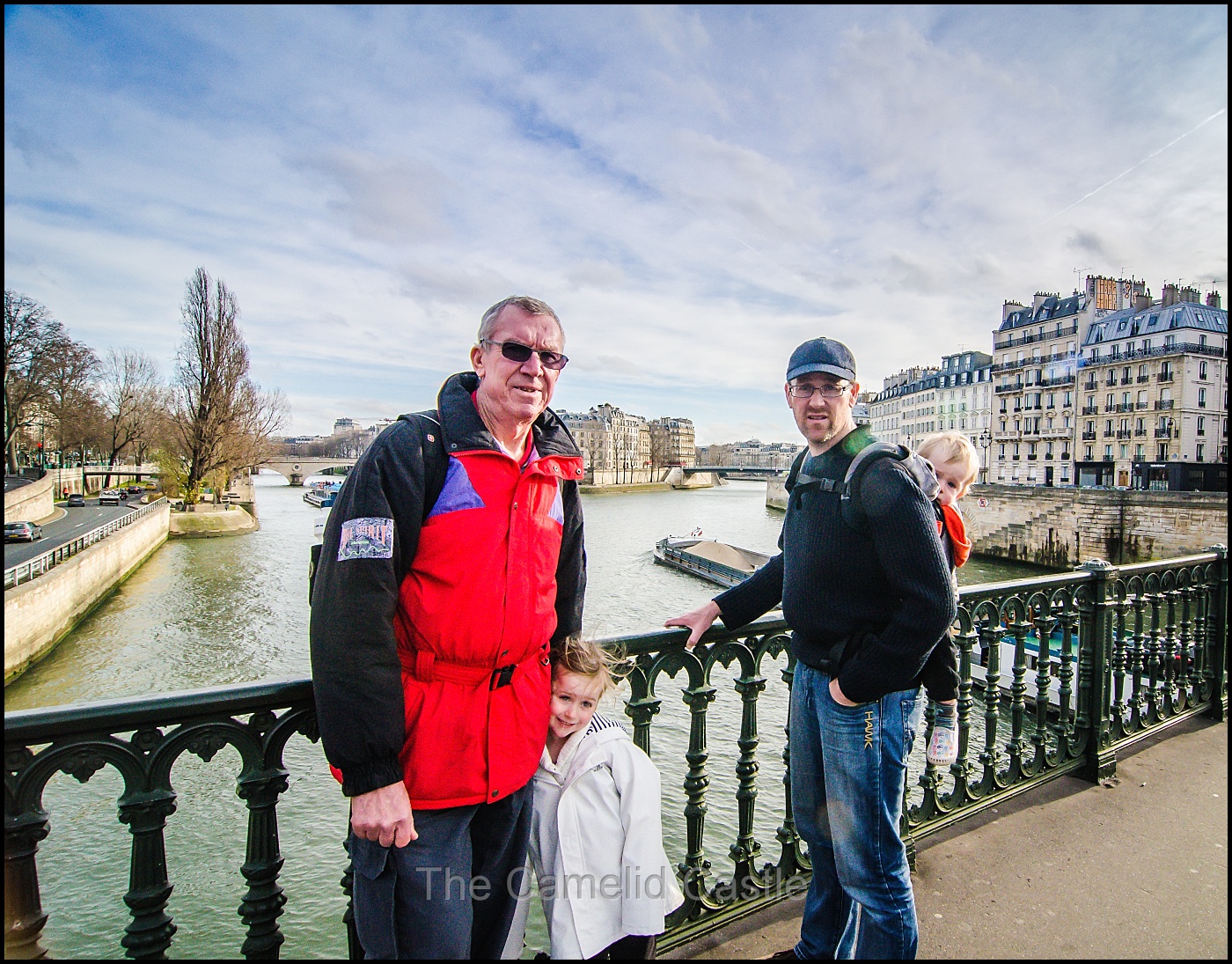 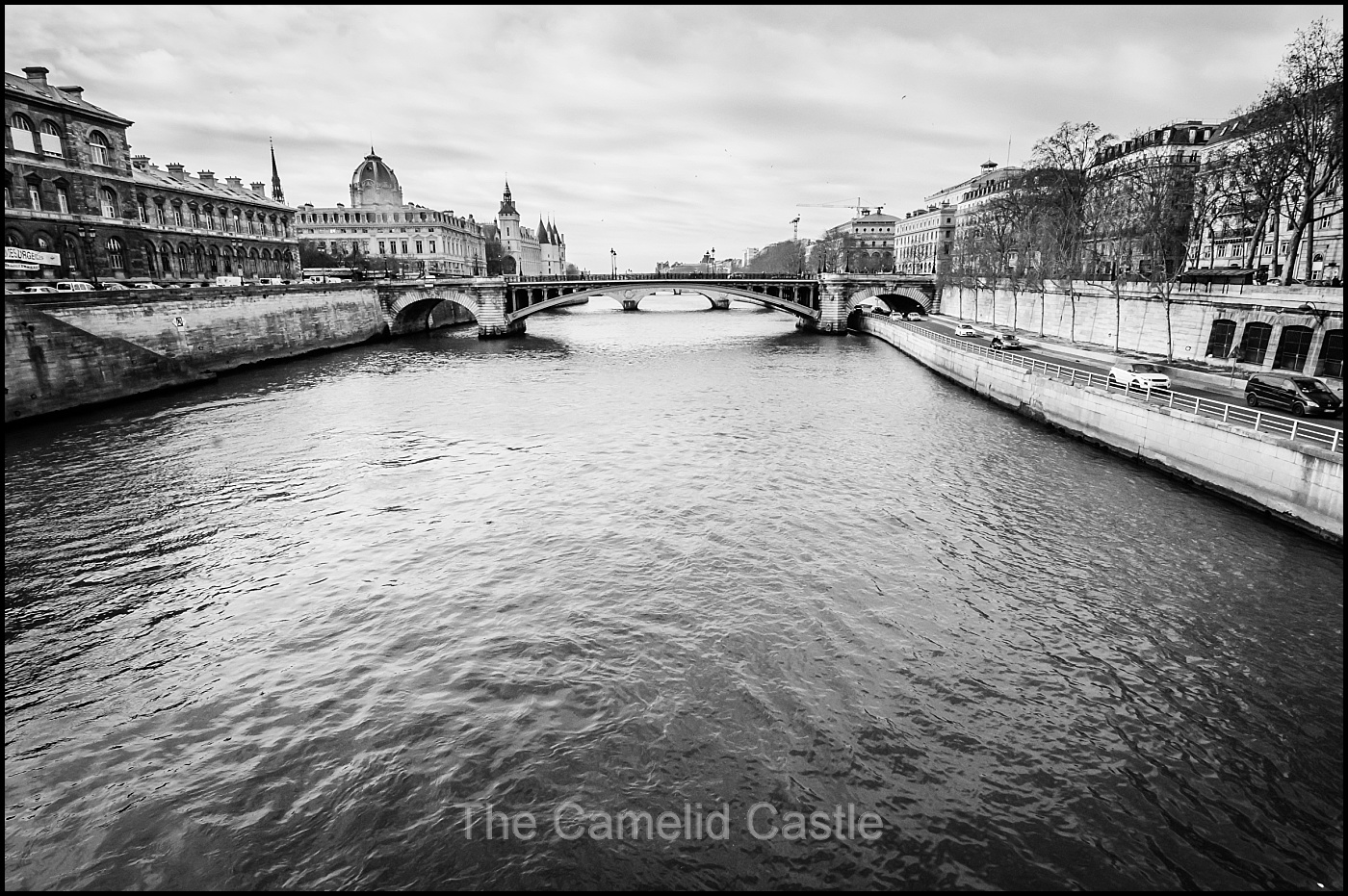 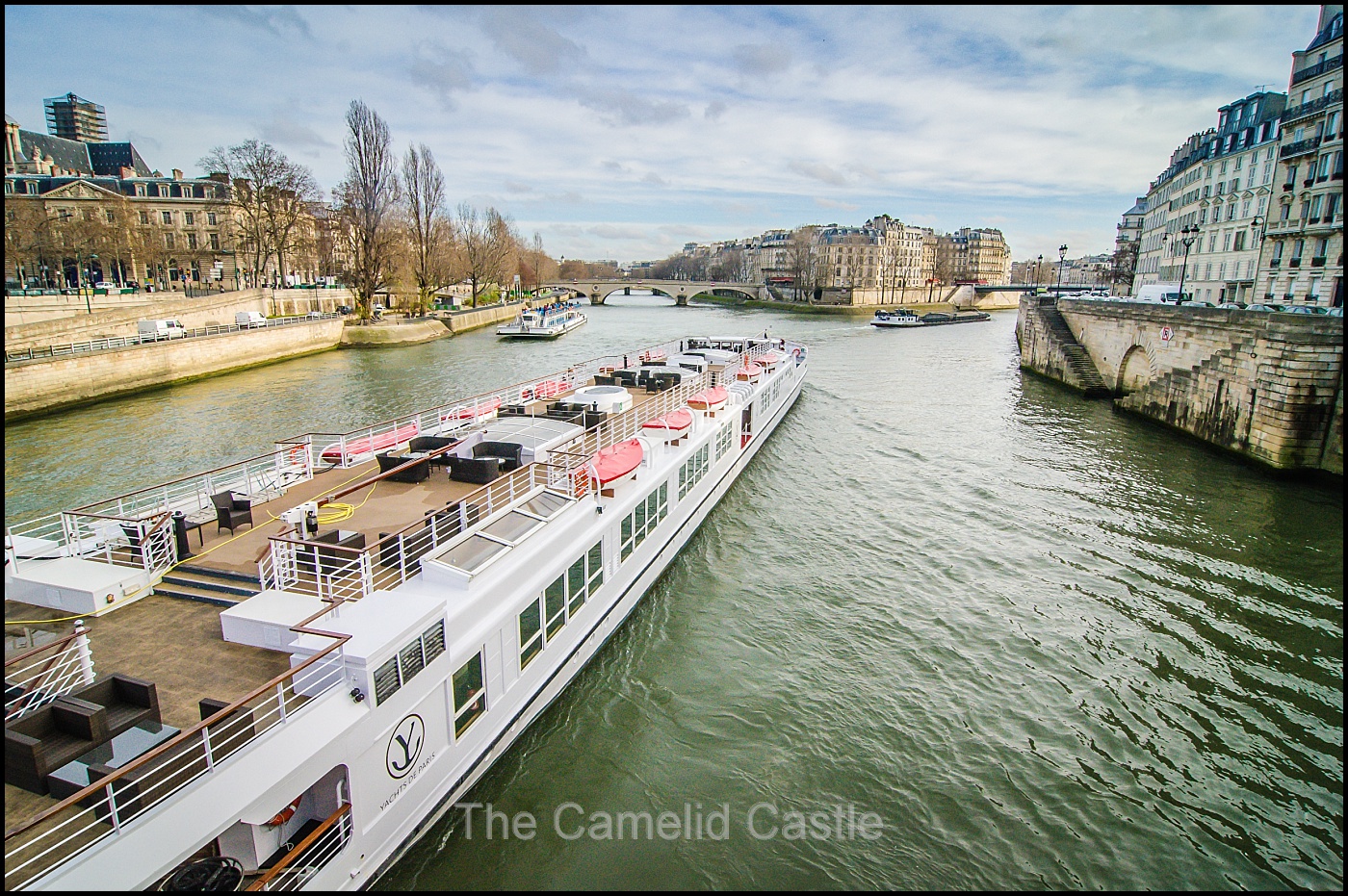 Anto found a shop to get his requisite  t-shirt and some keyrings. We then continued on our wanderings, trying to work up some stomach room for more food.  Luckily we found a park that provided a small amount of entertainment.

Shortly after his park visit, Soren finally gave into the sleep gods and napped on Anto’s back in the ergo. We had slowly started heading in the direction of our apartment, which took us back past Hôtel de Ville, which is where we saw yet another large number of armed military marching through the streets with automatic weapons, out protecting the public, or at least trying to make people feel safer.  There was certainly a large military presence throughout the whole city.

Our last little stroll through the Paris streets, took us through streets we had walked many, many times before, but even so we still managed to find a giant mural we had never seen before! 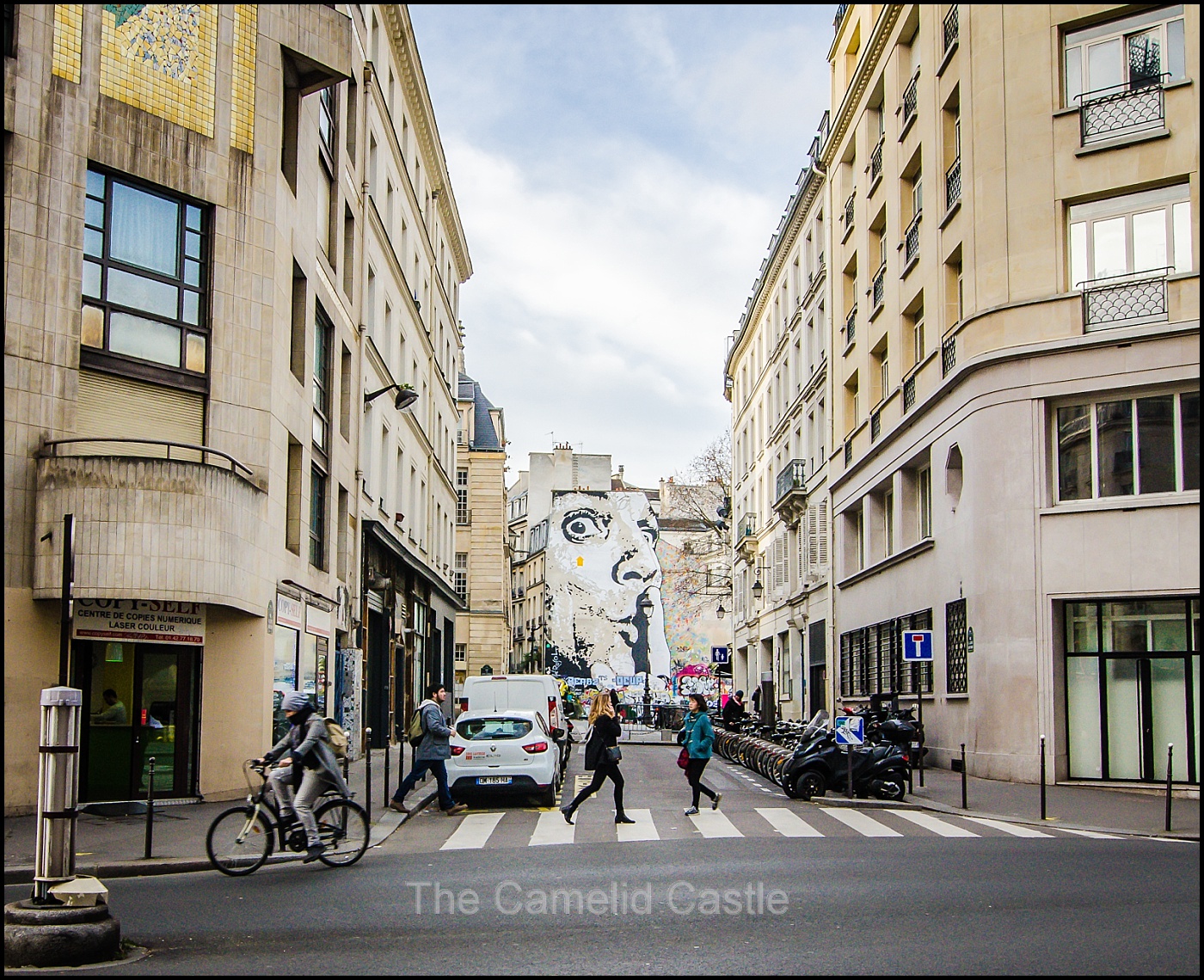 After our walk through Beaubourg we eventually found ourselves back in rue Montorgueil, and since it had been minutes since we had eaten, we thought we might as well fit in one last patisserie laden afternoon tea.

Soren was still happily napping in the ergo, and there was no way we were waking him up as it was still many hours before our flight departed. As a result he missed out on afternoon tea.  The rest of us stopped at another favourite patisserie, for our last Paris meal……..and so we could get the delicious hot chocolates we had fond memories of from our last trip.  Astrid was again a fan. We snacked on a flan naturale and a cour fromboise.  Both of which were very tasty.

It was lovely sitting in the sun and watching people wander up and down the street, but alas our holiday was almost over.  Definitely too full for any last-minute delicious treats, we had a final wander up the wonderful rue Montorgueil, hoping to return another time. 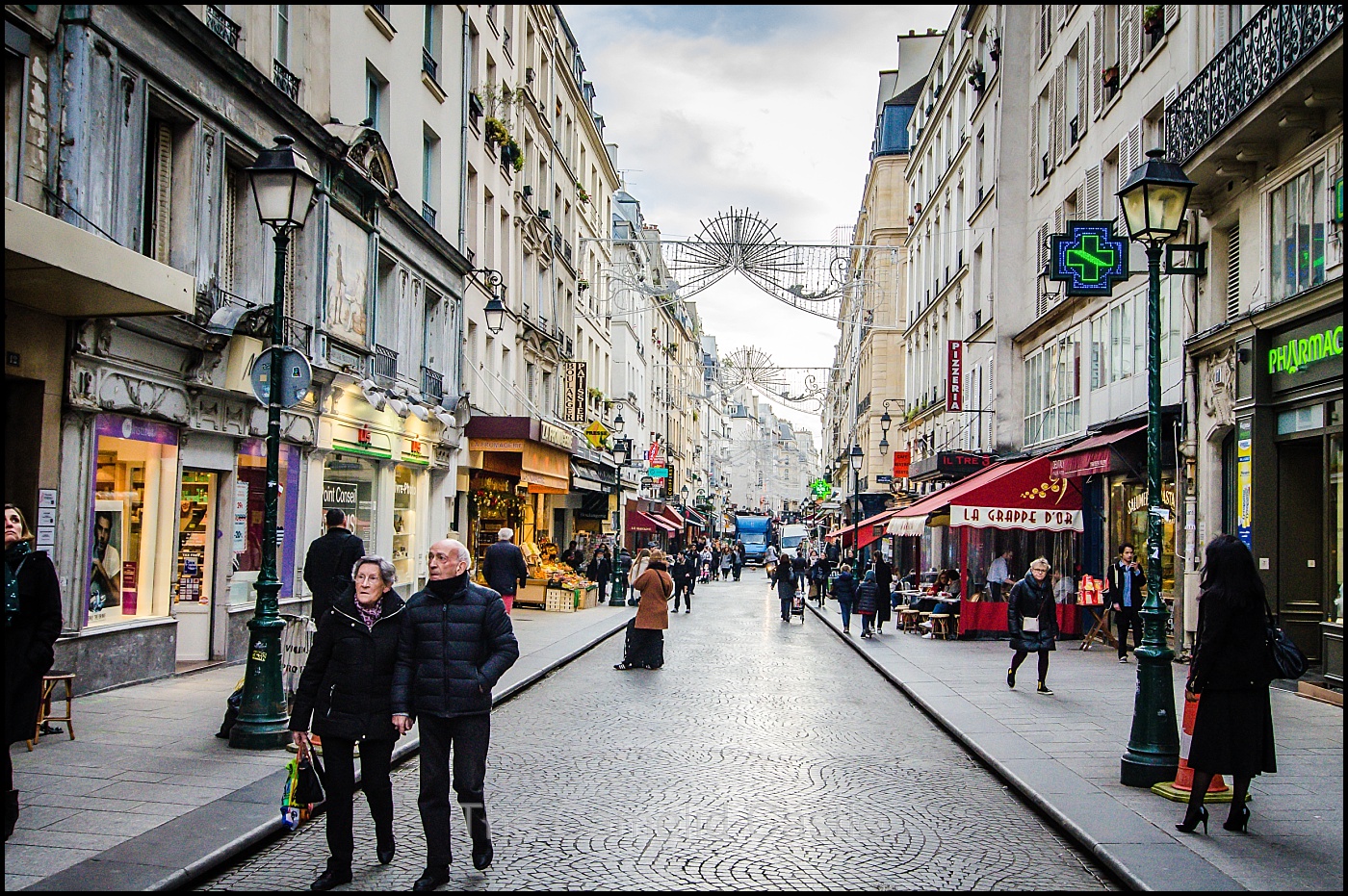 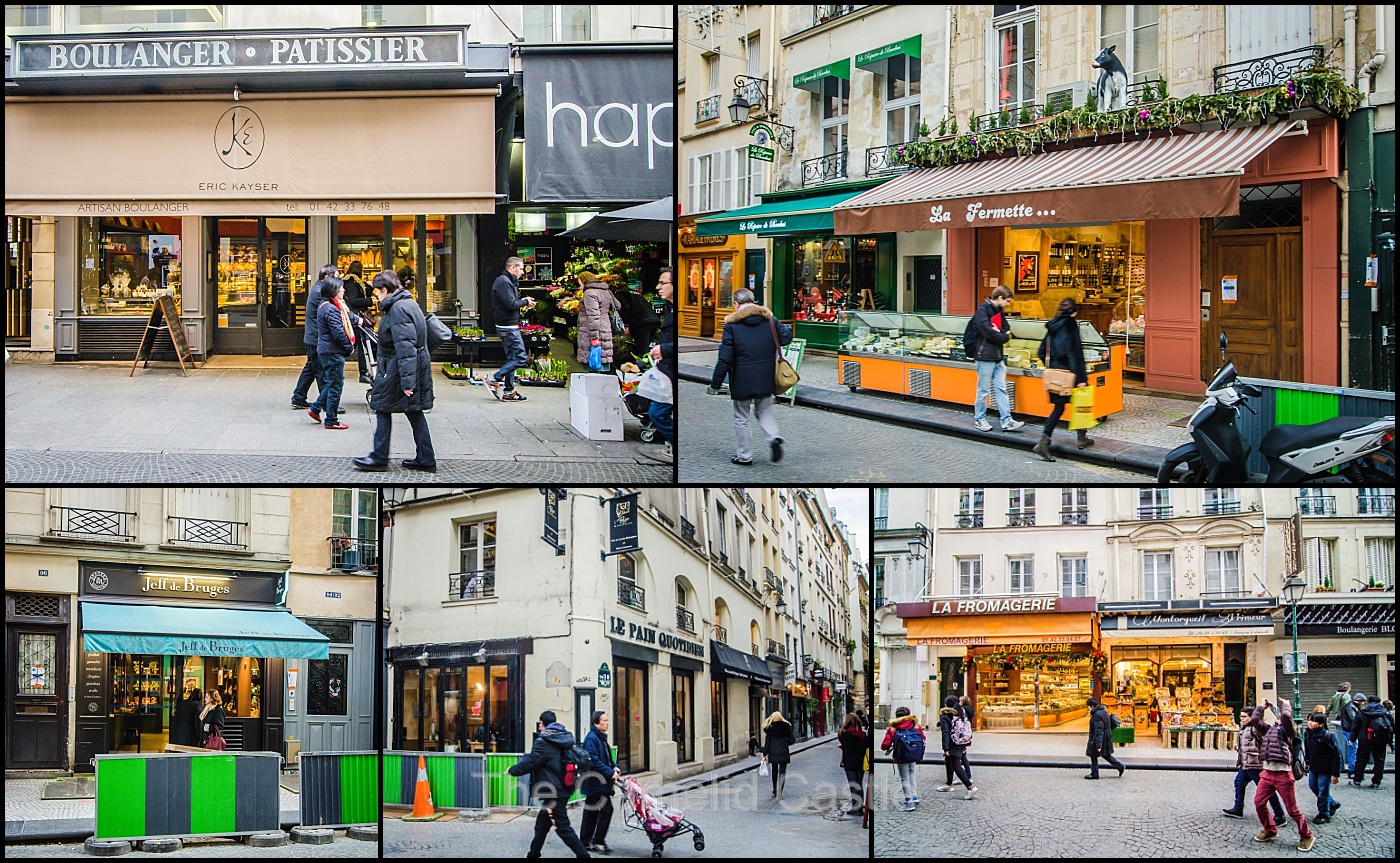 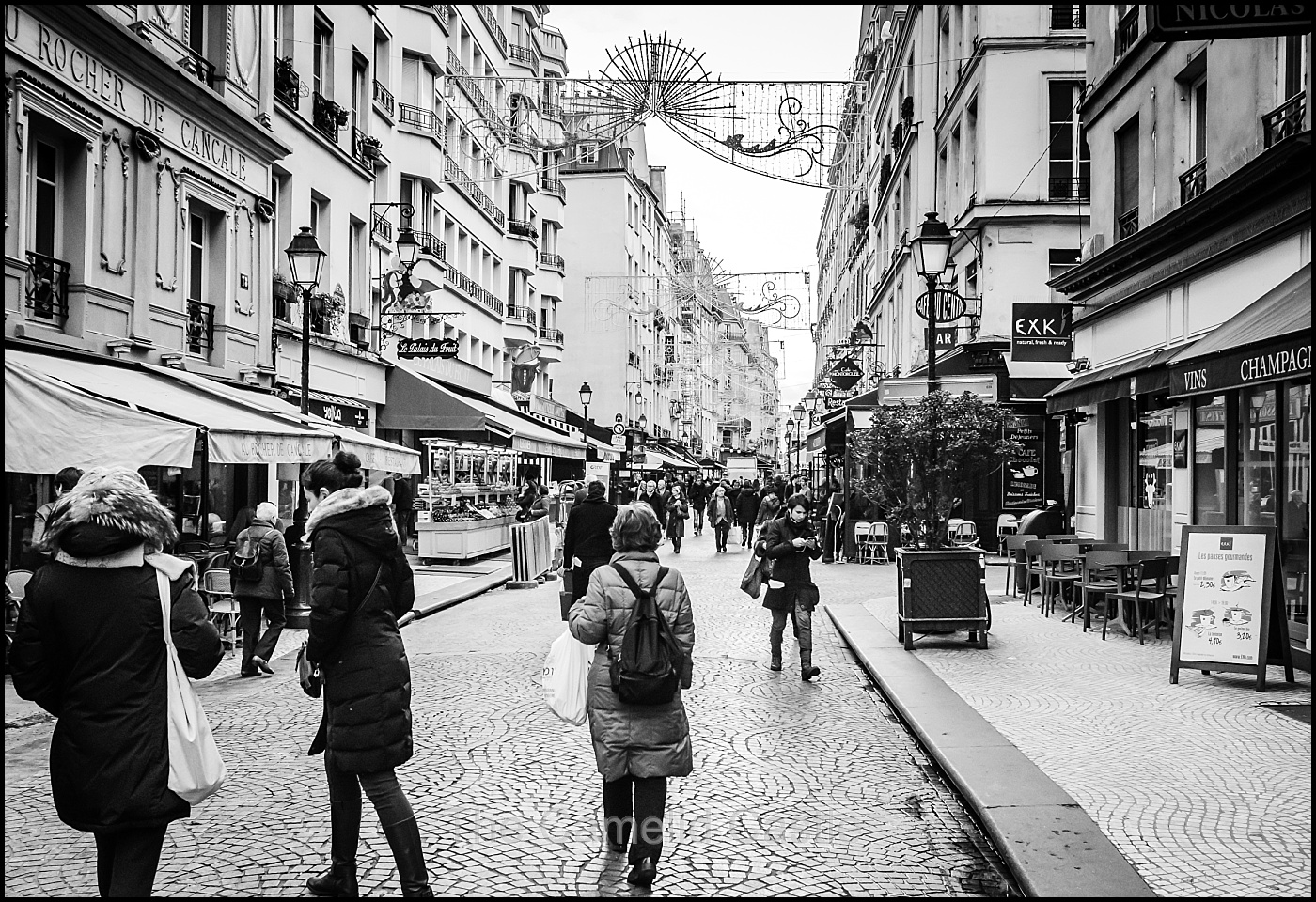 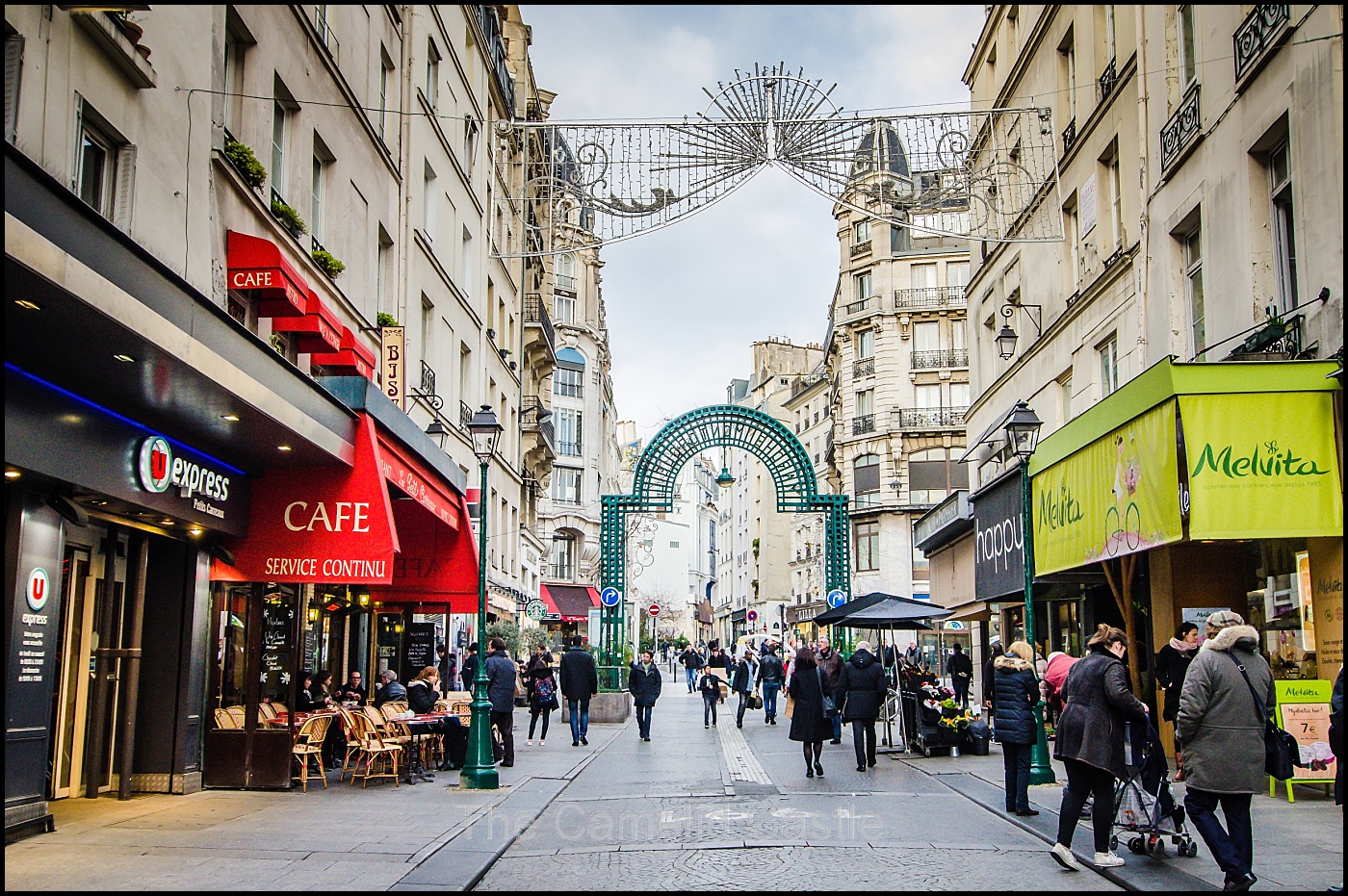 We walked the short distance back to rue St Dennis, to meet up  with Mikl and retrieve our bags before the trek to the airport. We were relieved to see our bags were still there, and the poor guy who had been minding them all day seemed relieved he could again move around his office.  Soren woke up as we were loading up with the luggage, and the long trek was underway.

The Charles de Gaulle airport, is a fair way out of Paris city, but very easy to get to by public transport.  With our superb research (and having done the airport trek several times before) we managed to get to the metro with minimal walking and only one small set of stairs to lug bags down.  Then it was a short metro back to Les Halles and a change to the RER and we were on our way out to Charles de Gaulle, very weary after a big 2 months but full of French pastry and ready to head home.

Statistics for Tuesday the 26th of January, 2016, in Paris, France – it was another sunny Winter’s day with a temperature range of 5 to 11 degrees, and a mean of 8 degrees.  The hot Summer temperatures at home were going to be a shock but at least we’d had a fairly ‘warm’ end to our Winter in Europe.  Our last day might have been full of eating but we still racked up the kilometres, by the time we boarded our flight, the total walking for the day was another impressive 18km. This brought the total for the last week of the trip to 124km.  It certainly didn’t do my injured foot any favours and made the flight home rather ‘interesting’.  More on that in the final trip blog…….