I’ve taken a bit of a break from both blogging and my camera, but I most definitely took a few pictures over Christmas.  I couldn’t miss all the fun and food of the festive season!  Christmas 2017 was a relatively quiet affair but there were parties, lights, presents and food galore…….

With school done and dusted for the year, it was straight into the festivities.  The Victorian side of the family made it up to Canberra for the annual family Christmas party, so we really had no excuse not to attend this year. The kids tucked into the food (despite it being our second Christmas party for the afternoon) and loved their gifts from Santa Peter.  We then finished off the evening with a freak hail storm! There is nothing like tired, muddy, full-of-sugar, wet kids to finish the evening off……. 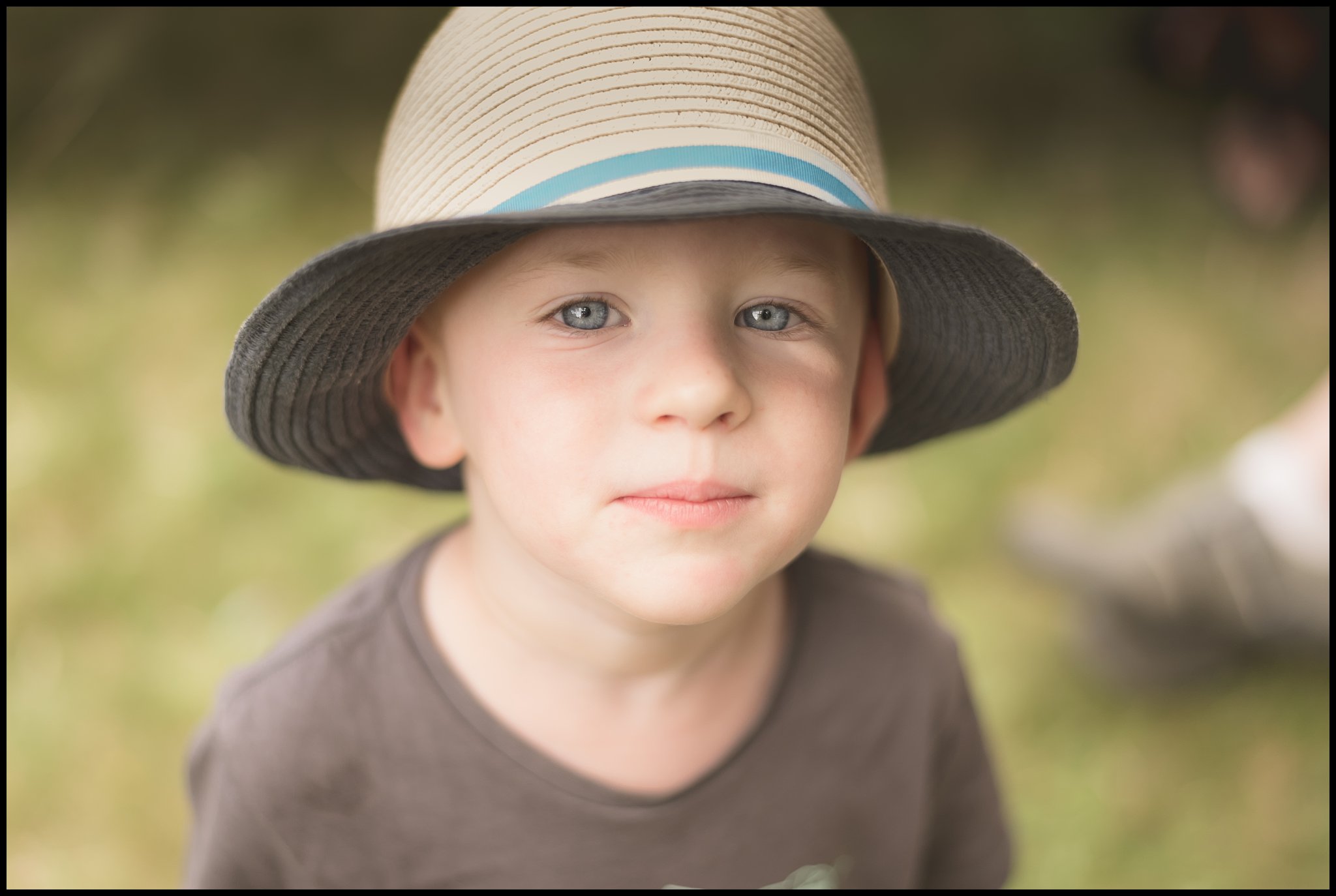 It had been 3 years since we last took the kids to see the Christmas lights in Canberra, Soren was only a baby the last time we went. Astrid remembered our last trip, mostly for the late night and lollipops!  We had seen plenty of Christmas lights 2 years earlier on our Europe trip. In Europe there was the convenience of being able to see them quite early in the afternoon, in fact it was pitch dark in Sweden by 3pm so we didn’t even need a late night!

Sadly, Canberra doesn’t get dark until after 8.30pm at this time of the year so we had enforced afternoon naps and the kids were fed and rearing to go by 8pm, at least an hour past their bed time.

There are plenty of lights to see throughout Canberra but we picked a handful that were meant to be worth visiting, and not too far from each other, and headed off. Sadly it was still too light by the time we got to our first house and the lights were not yet on…… so it was a quick stop at McDonald’s for an ice cream and to fill in time (the kids didn’t complain!). 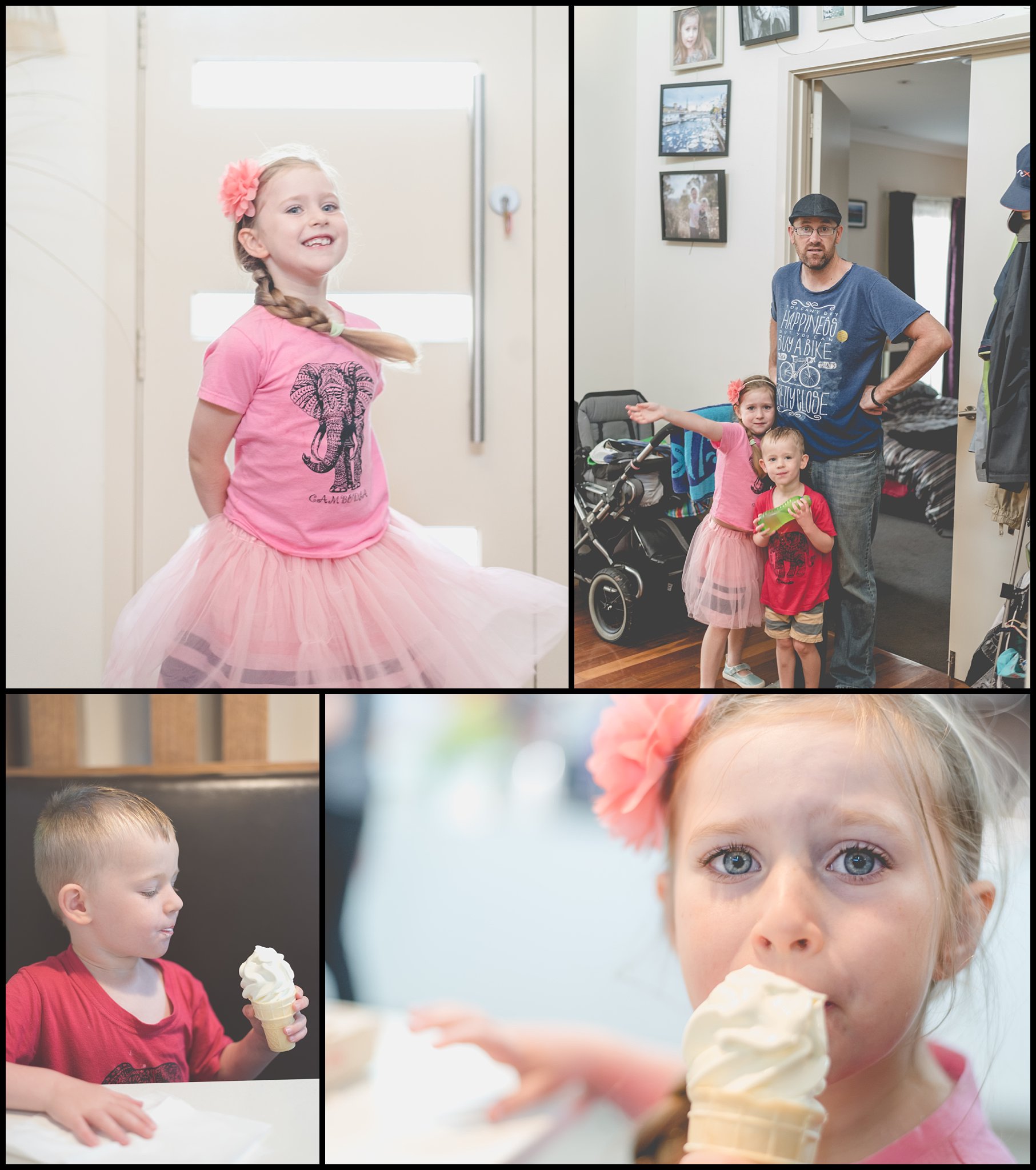 Finally it was dark enough and it was off to see some lights.  We visited 6 houses and drove past plenty more.  The kids loved getting out and walking through the coloured lights, visiting giant dressed up creatures and scoring plenty of lollipops. 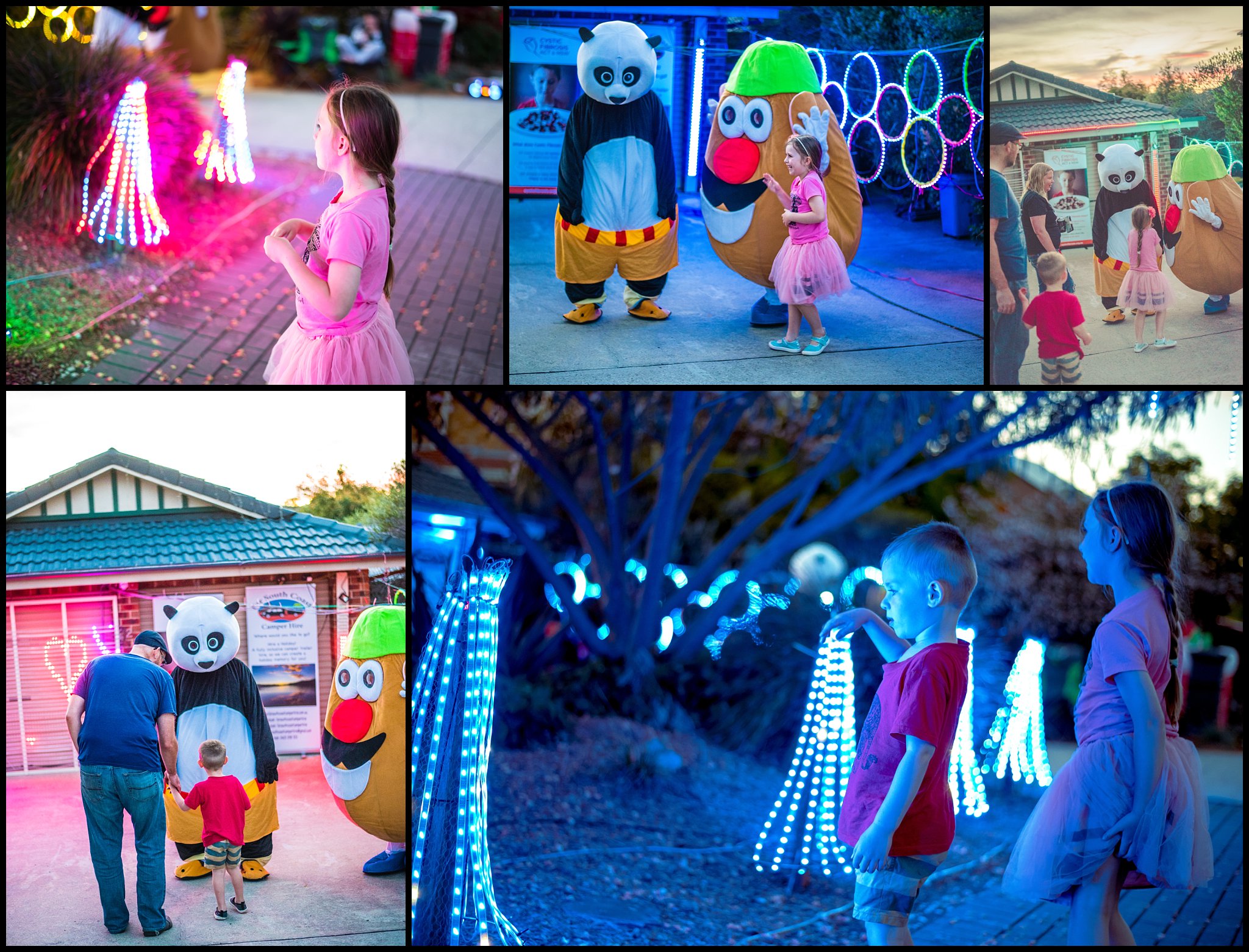 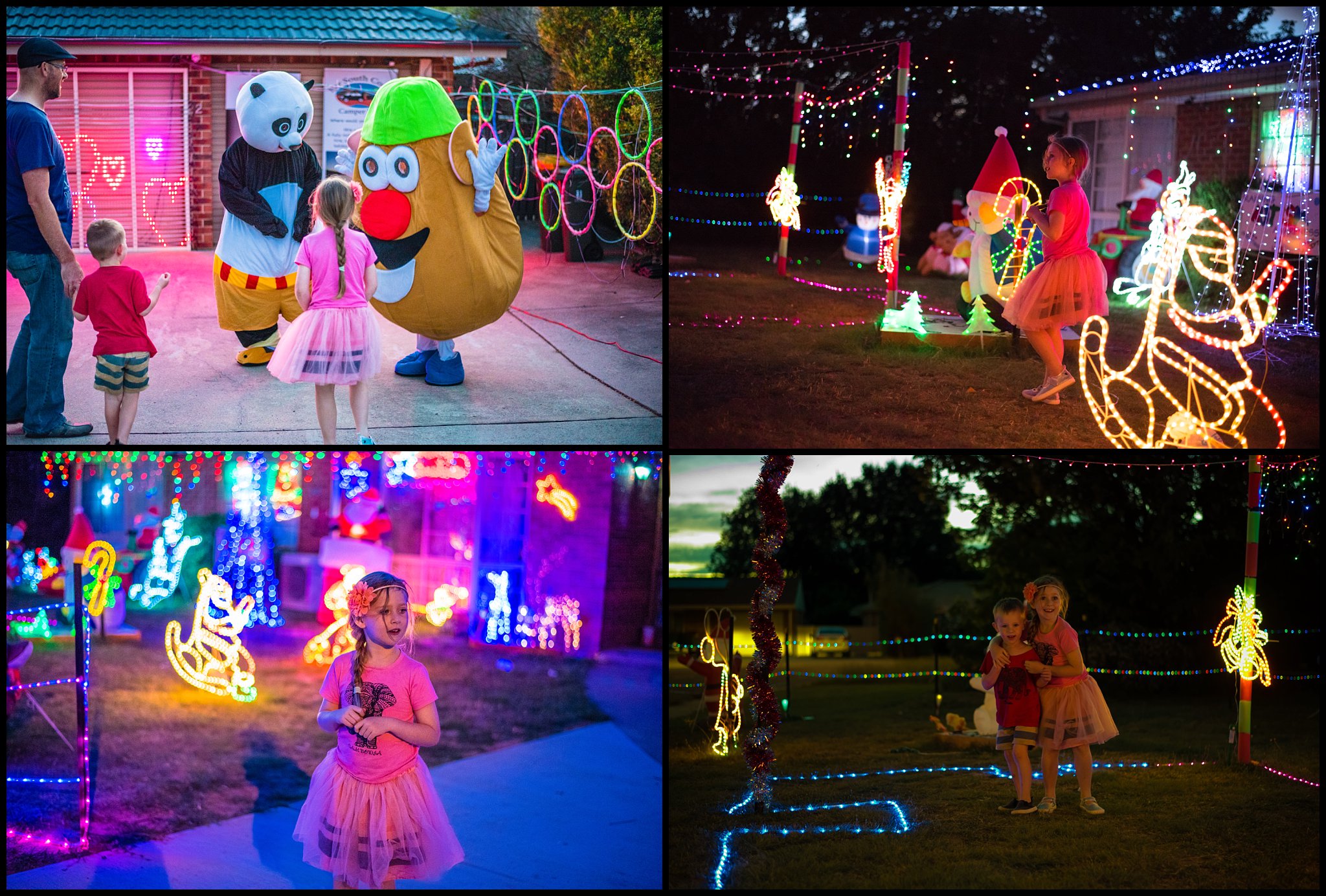 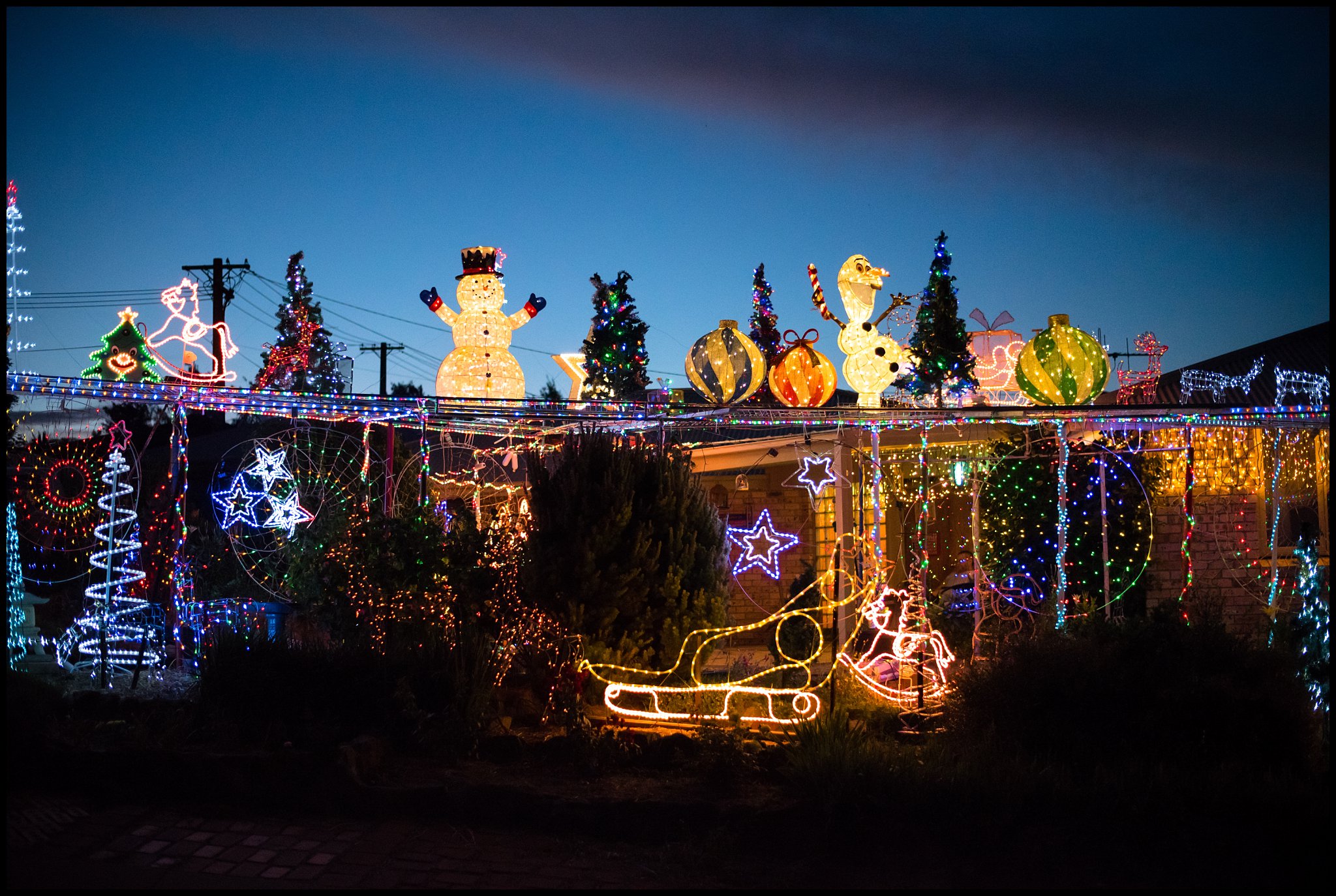 We saved the best for last, a house that causes the traffic to be stopped and redirected and required quite a bit of walking due to having to park quite a distance away.  Despite it nearing 10pm the kids were not going to leave without a visit and had a wonderful time. 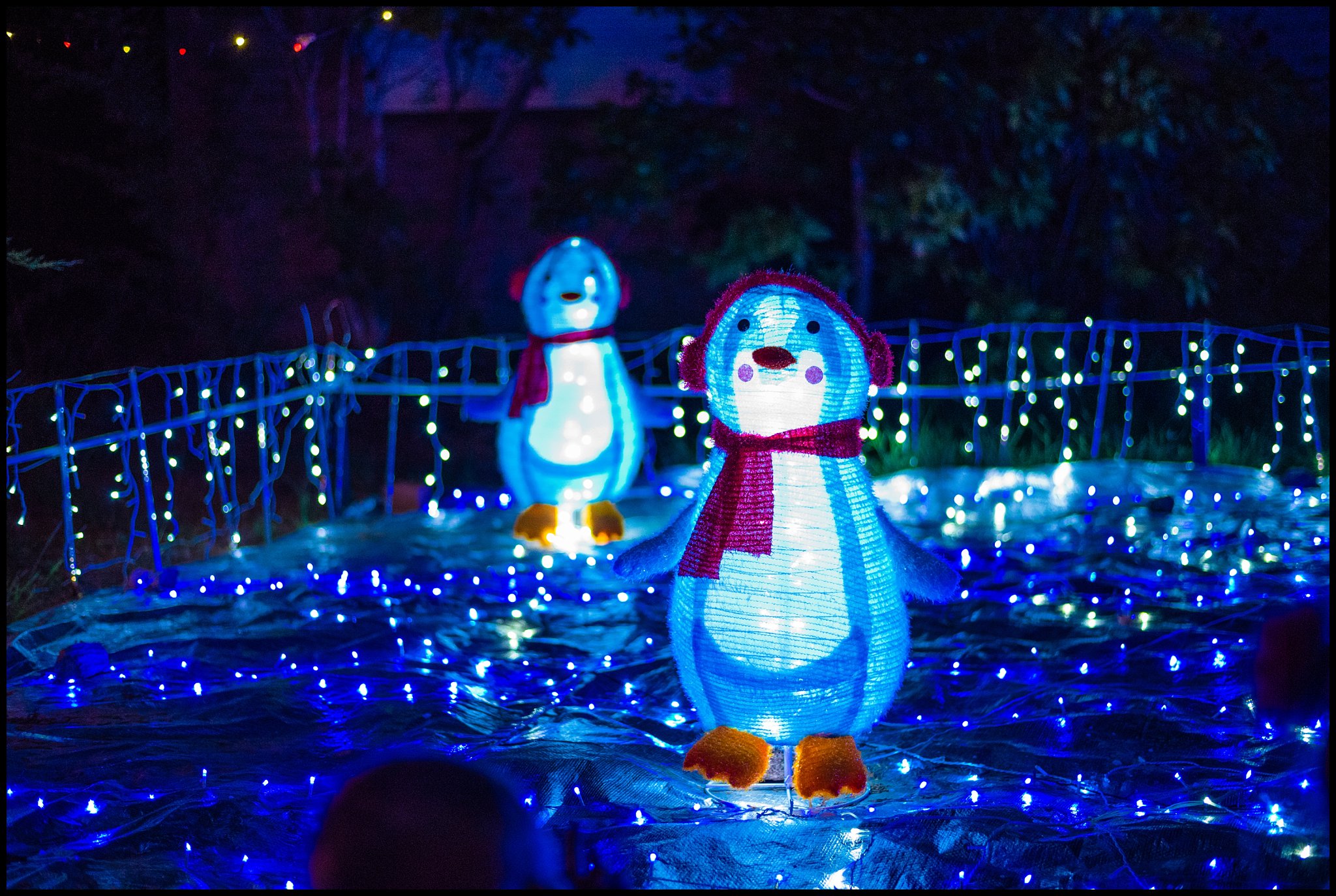 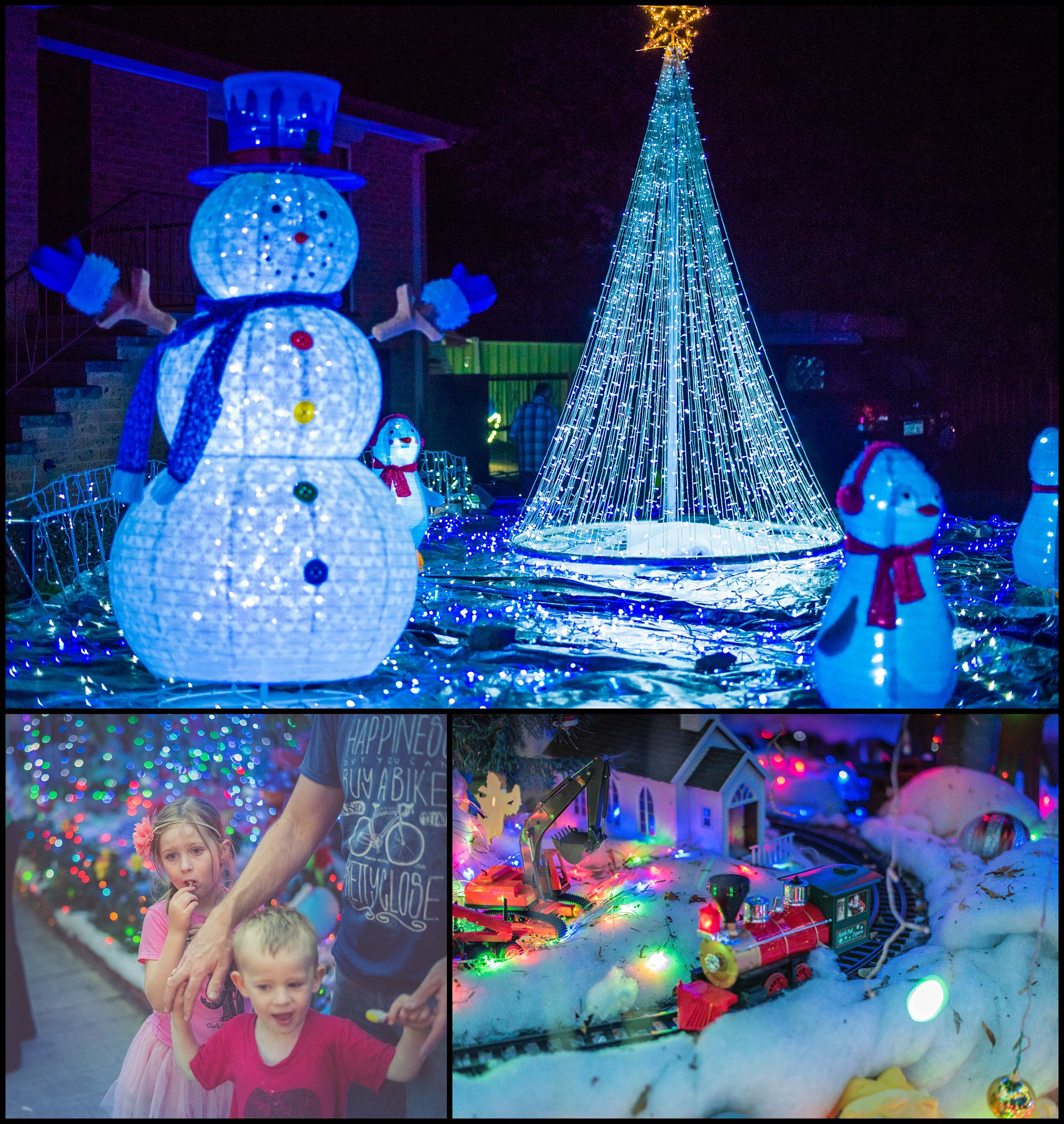 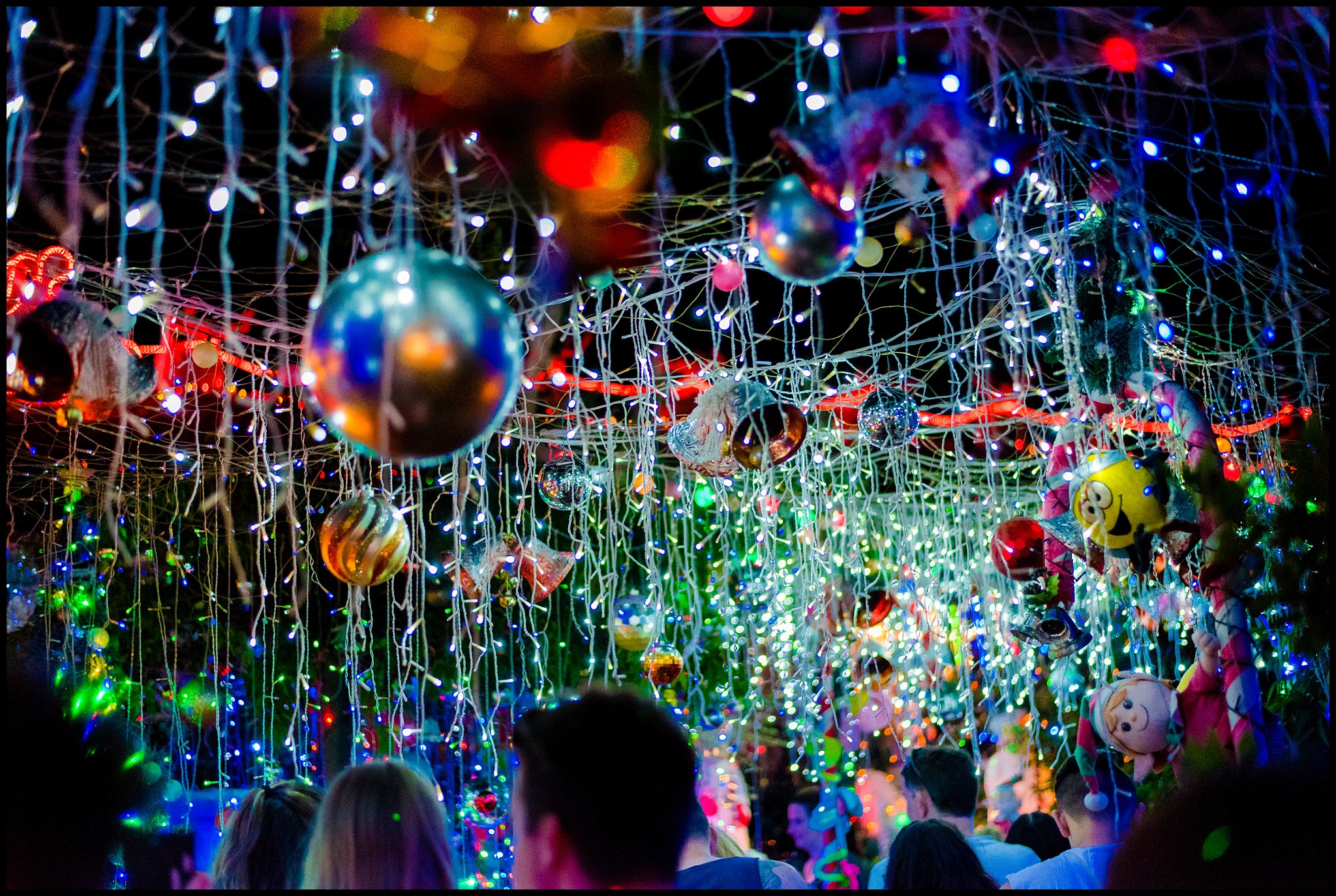 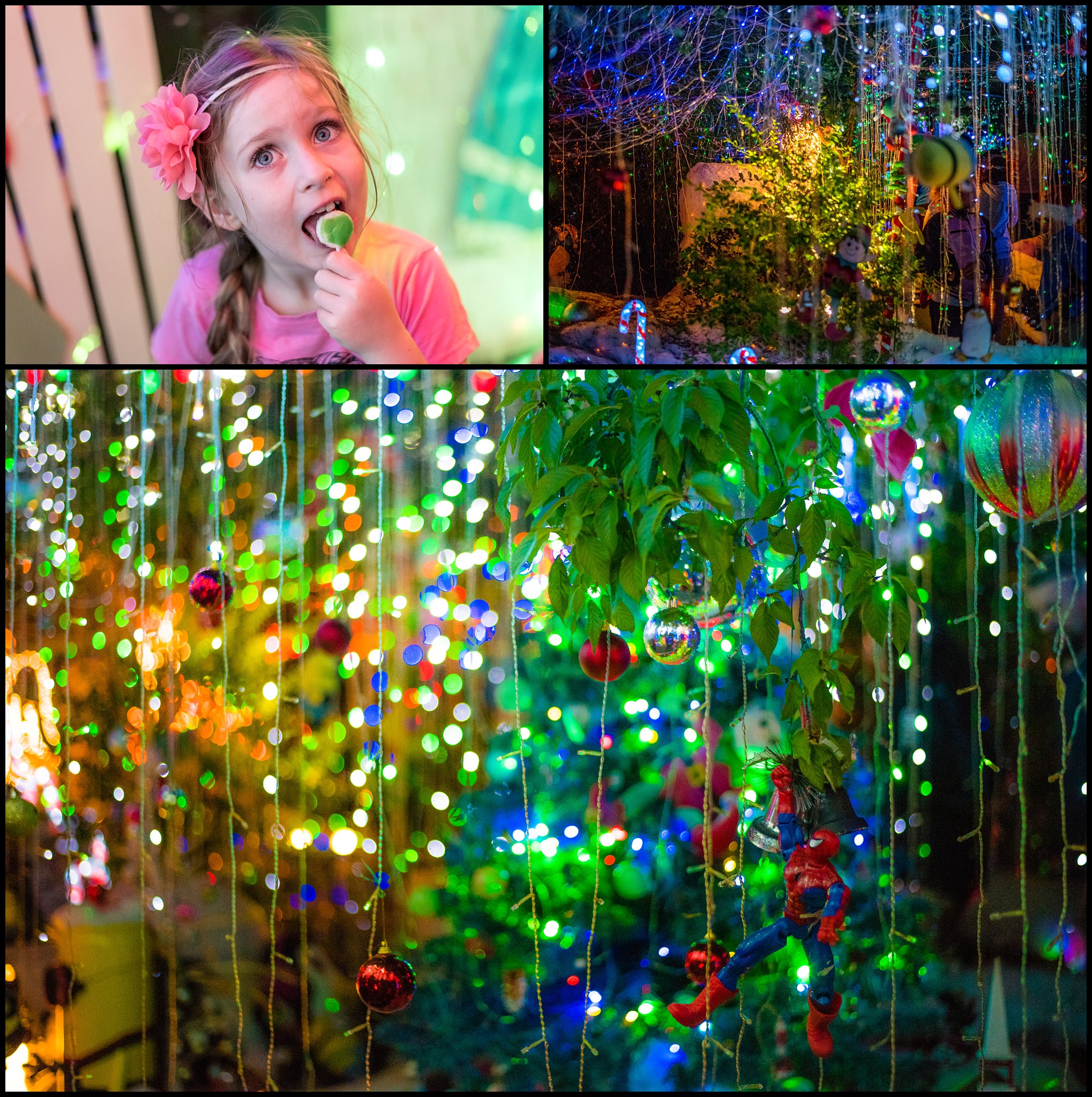 It was close to 11pm by the time they made it to bed (and still well over 30 degrees Celsius) so we were seriously considering being in Europe again next Christmas to alleviate both those problems!

After weeks of unfettered excitement (it’s a long wait to Christmas when you are 6 and 4…..) it was finally Christmas Eve.  On another scorching afternoon we had Grandma, Grandpa and Uncle Mikl come over for some afternoon tea of Christmas treats: gingerbread, biscotti, shortbread, stollen and eggnog. 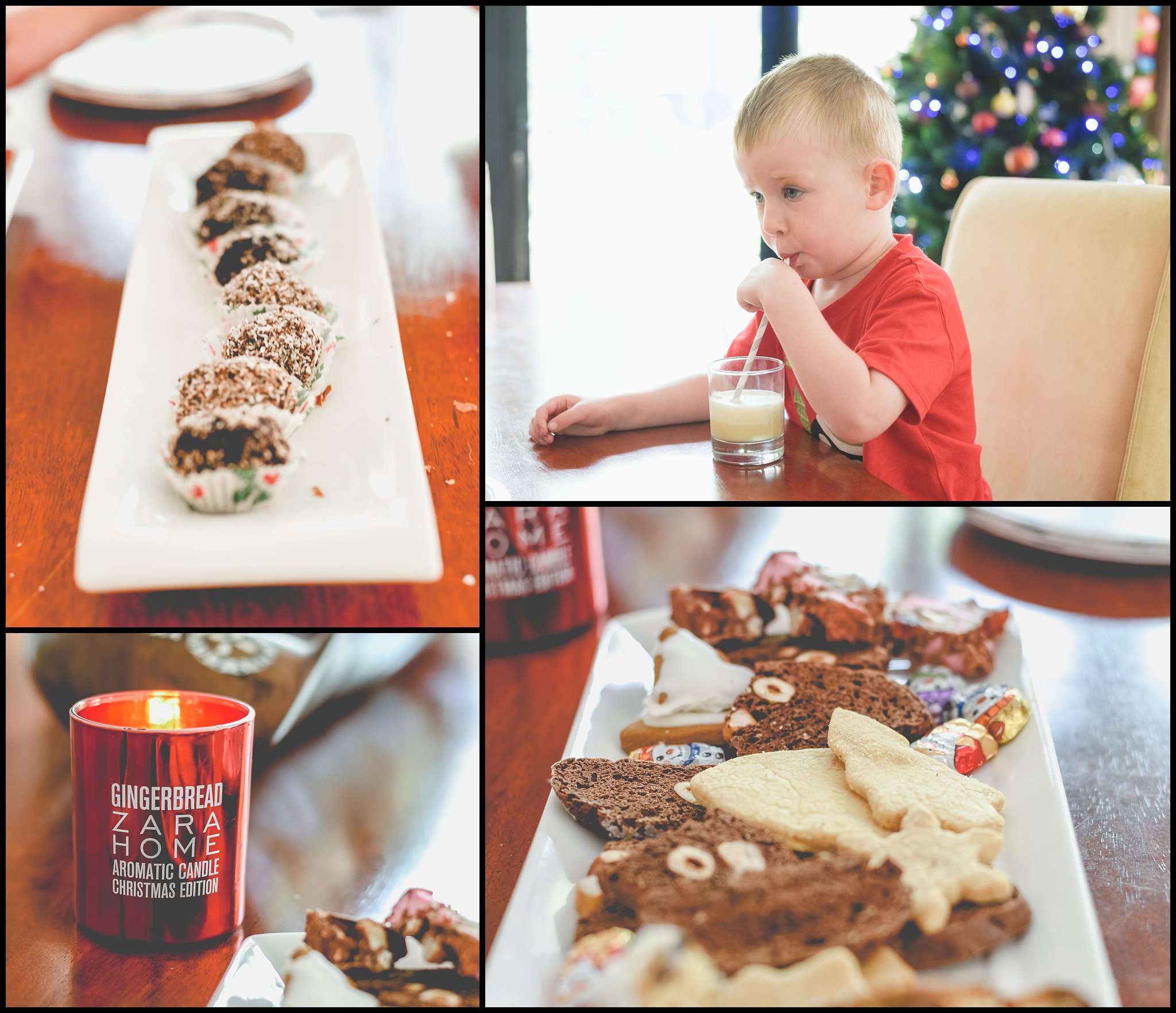 Then it was time to get stuck into the first round of presents.  We all did well and the kids were beside themselves with excitement……… 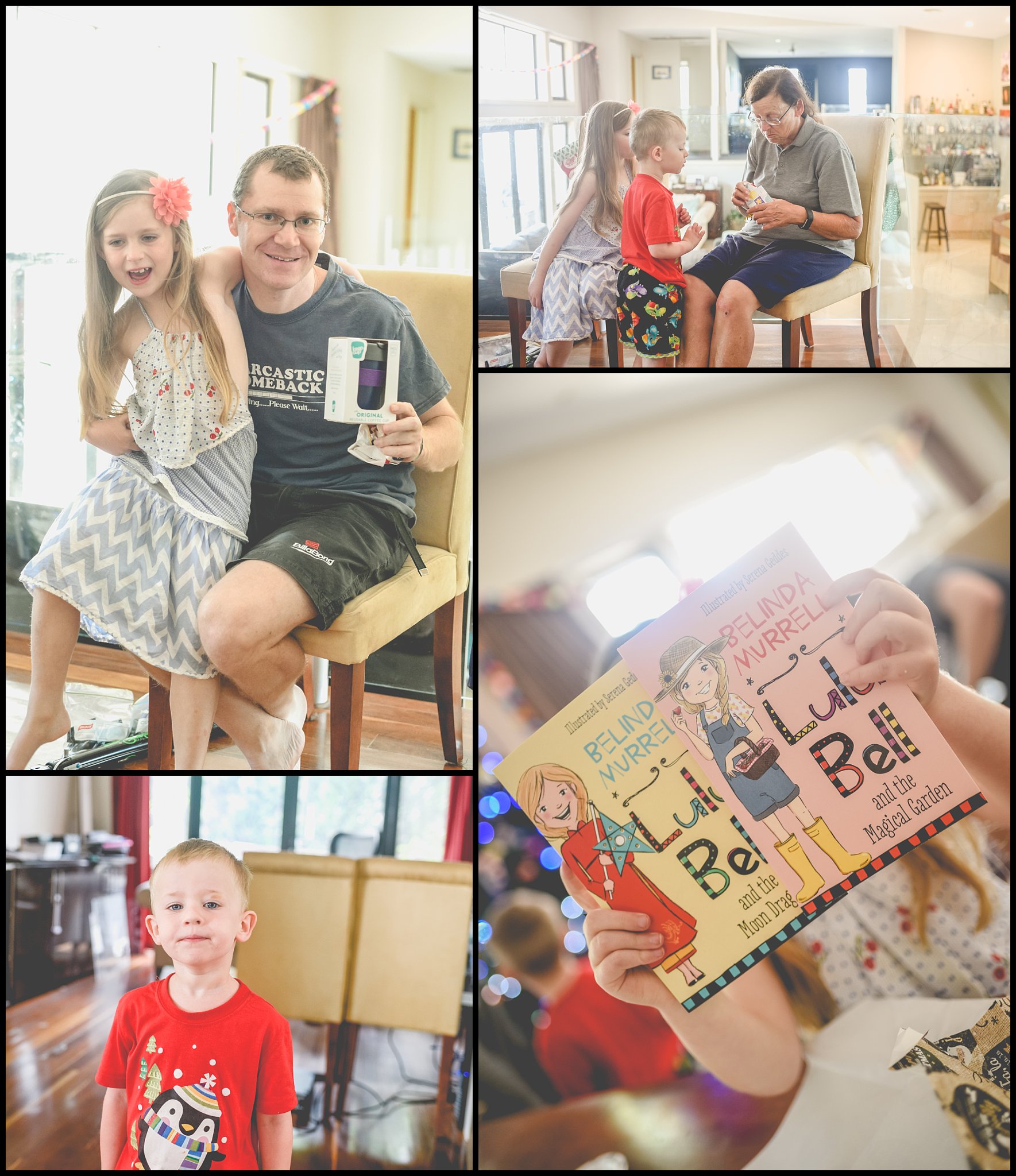 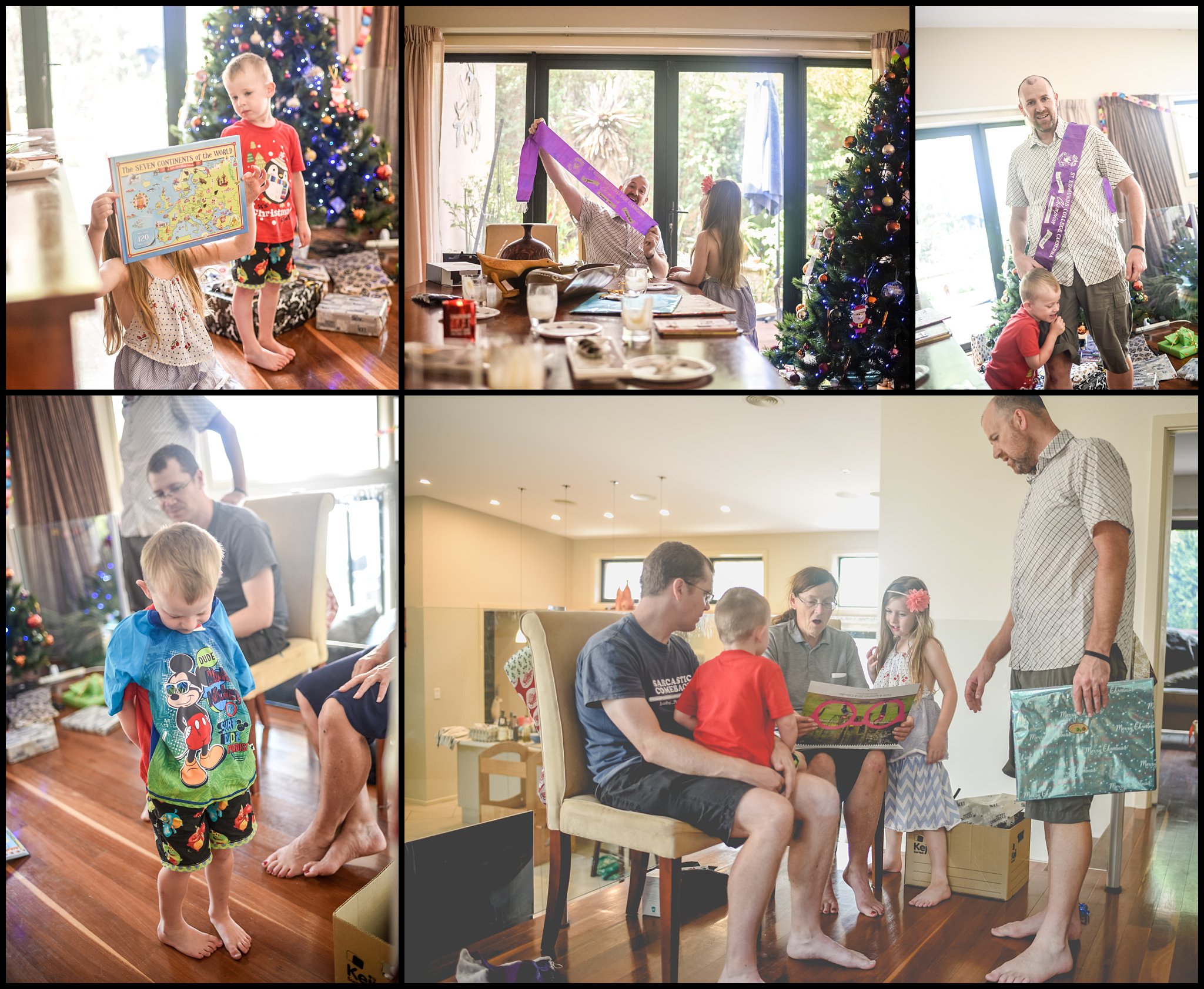 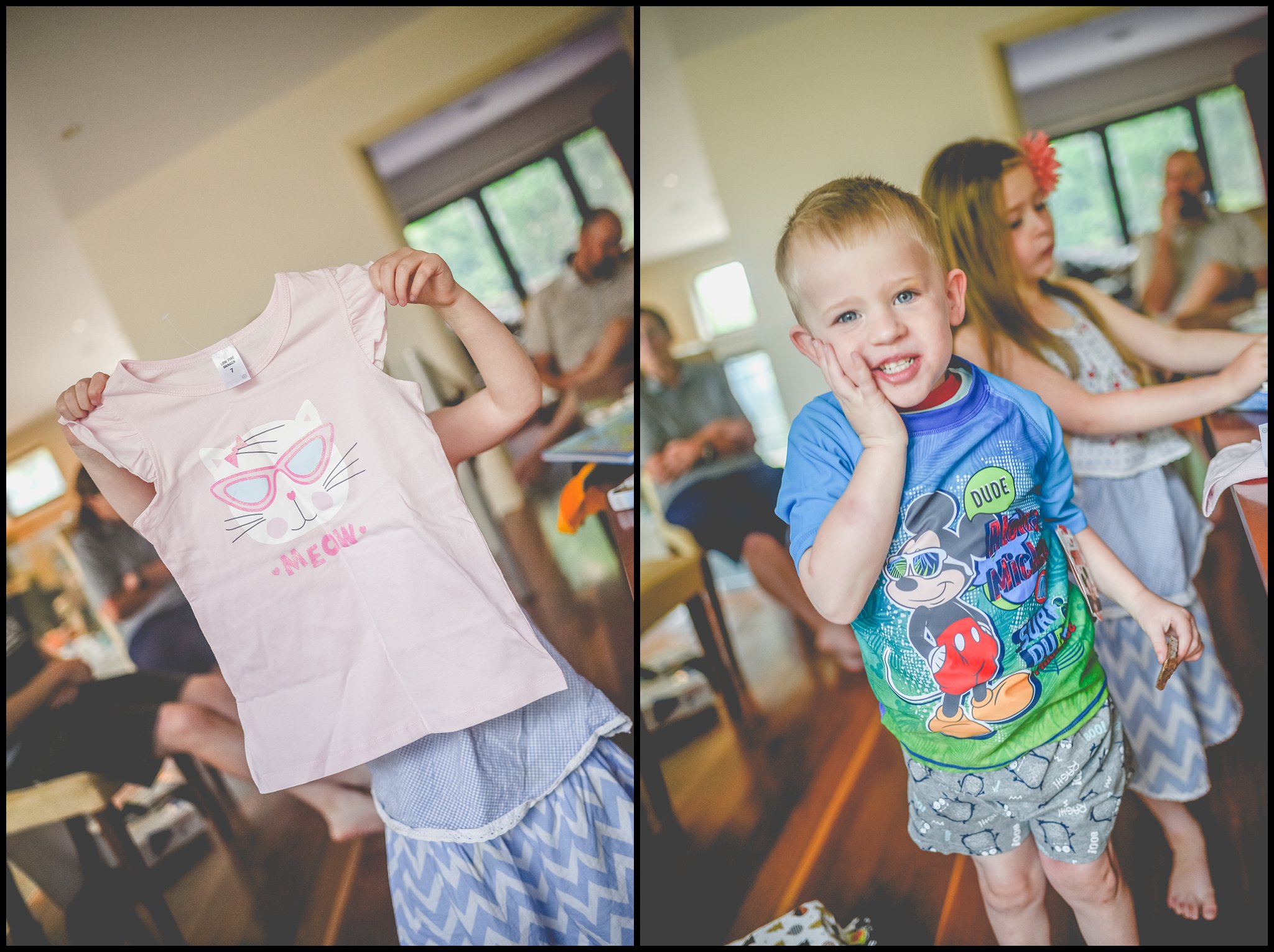 Once a tiny amount of the sugar and excitement had worn off we had to convince the kidlets to sleep so we could prepare for Christmas day…….. 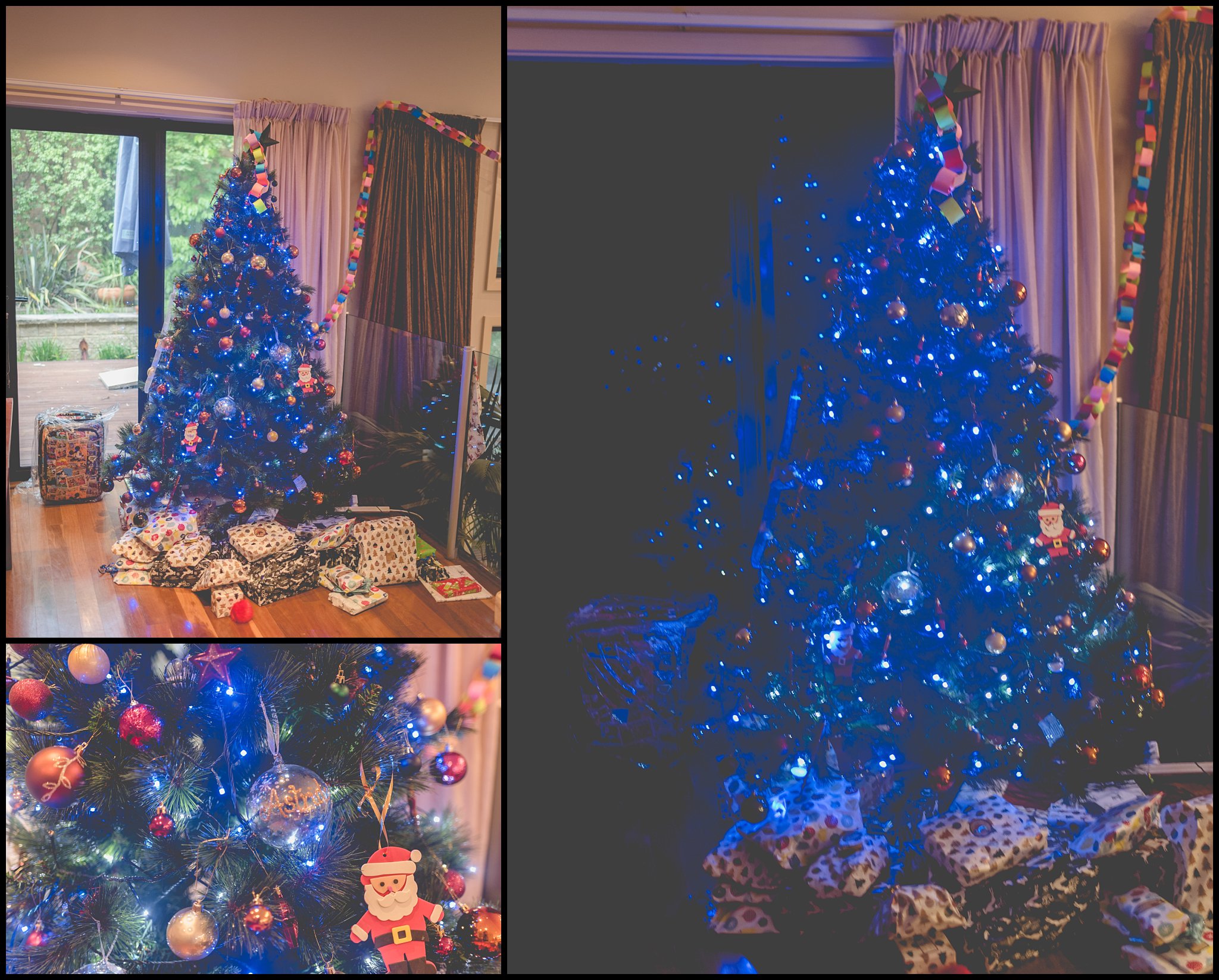 In some kind of record (or at least supreme organisation) the parent-elves were not up late baking, wrapping or present constructing.  The over-tired children even managed to sleep-in until almost 8am on Christmas day! It was all rather civilised this year 🙂  Once they were up and the coffee was on its way, it was straight into the next round of presents, there were plenty of hits, we all did well, and the kids were super-proud of the things they had picked up for us. 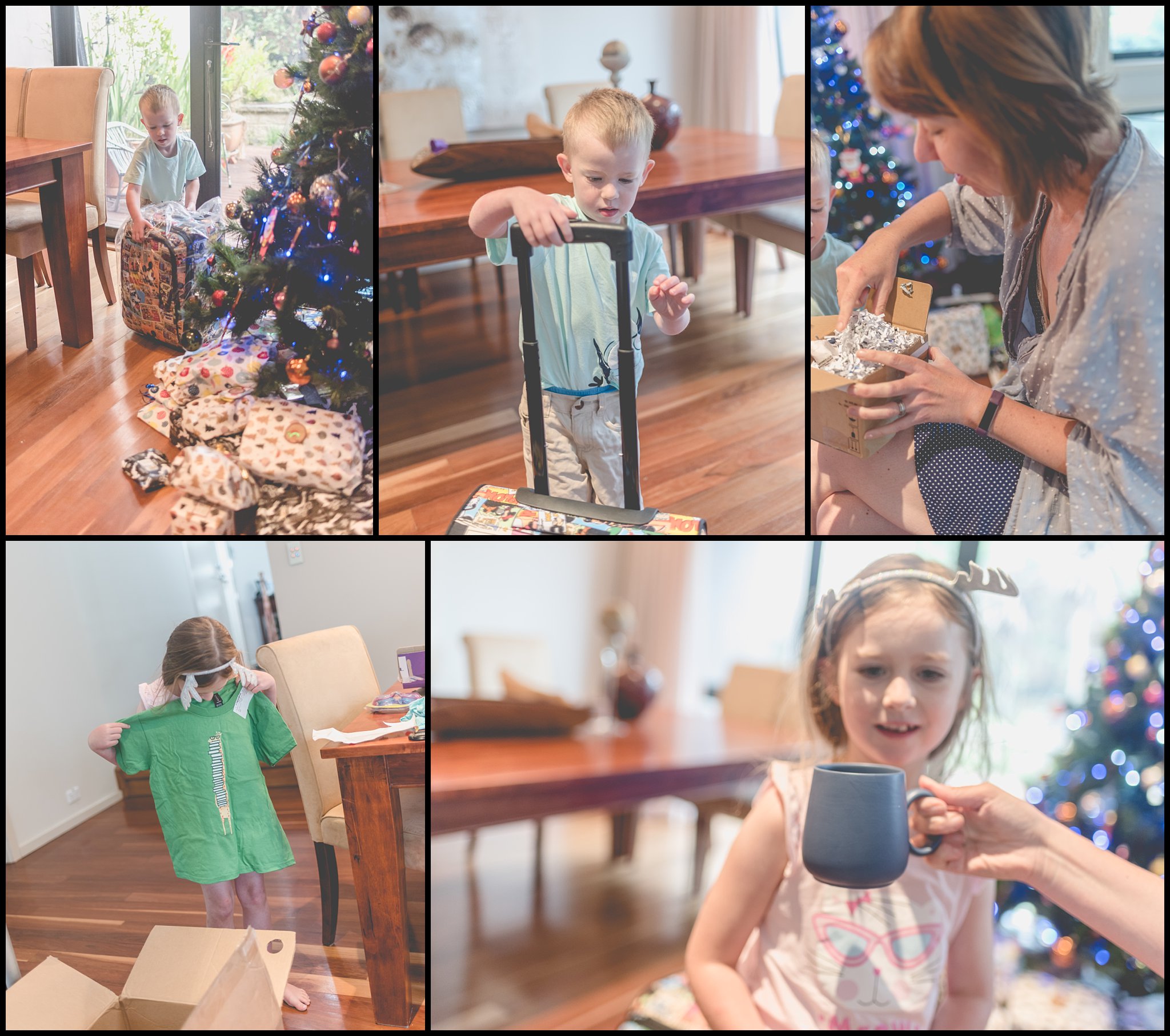 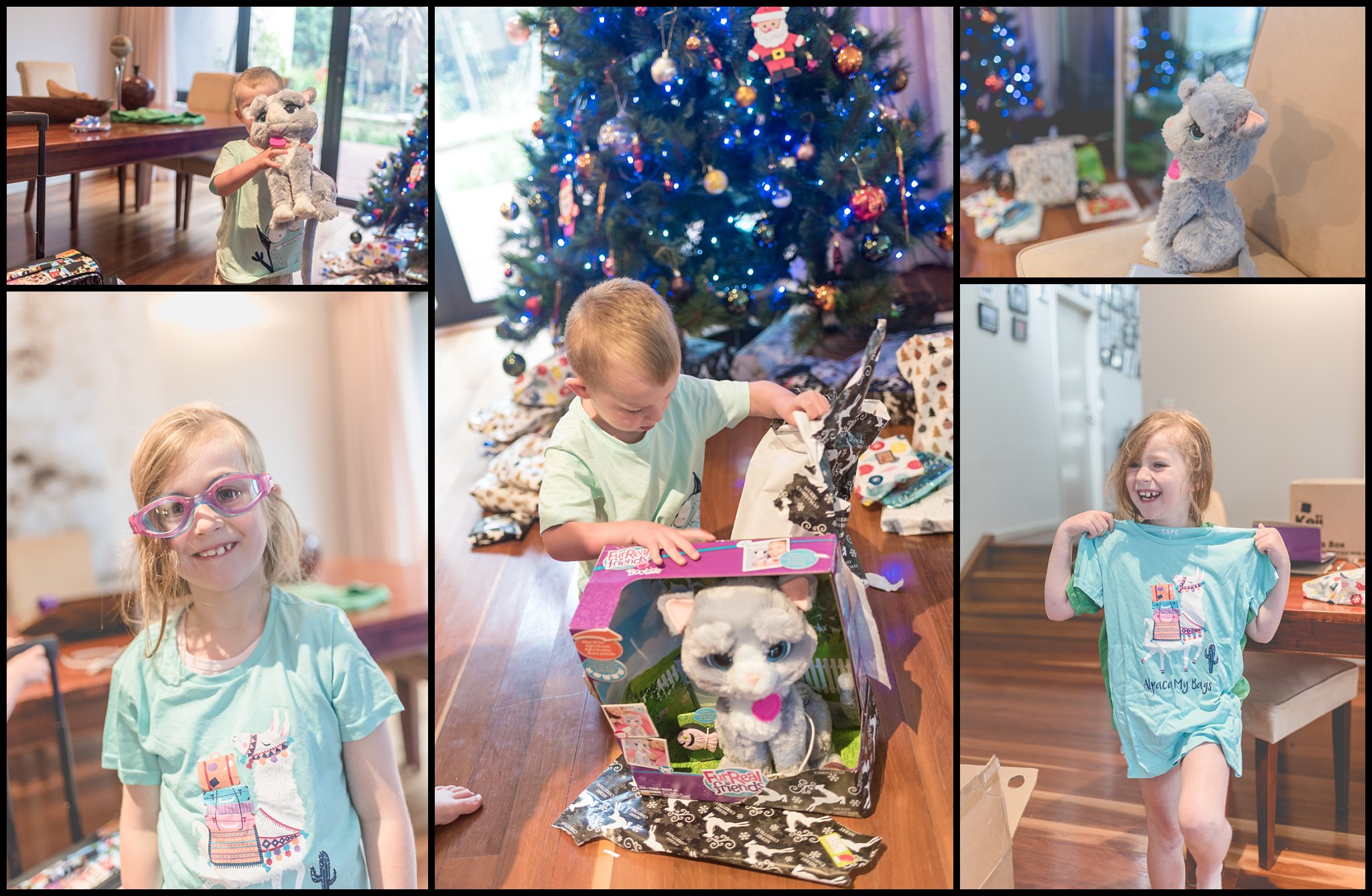 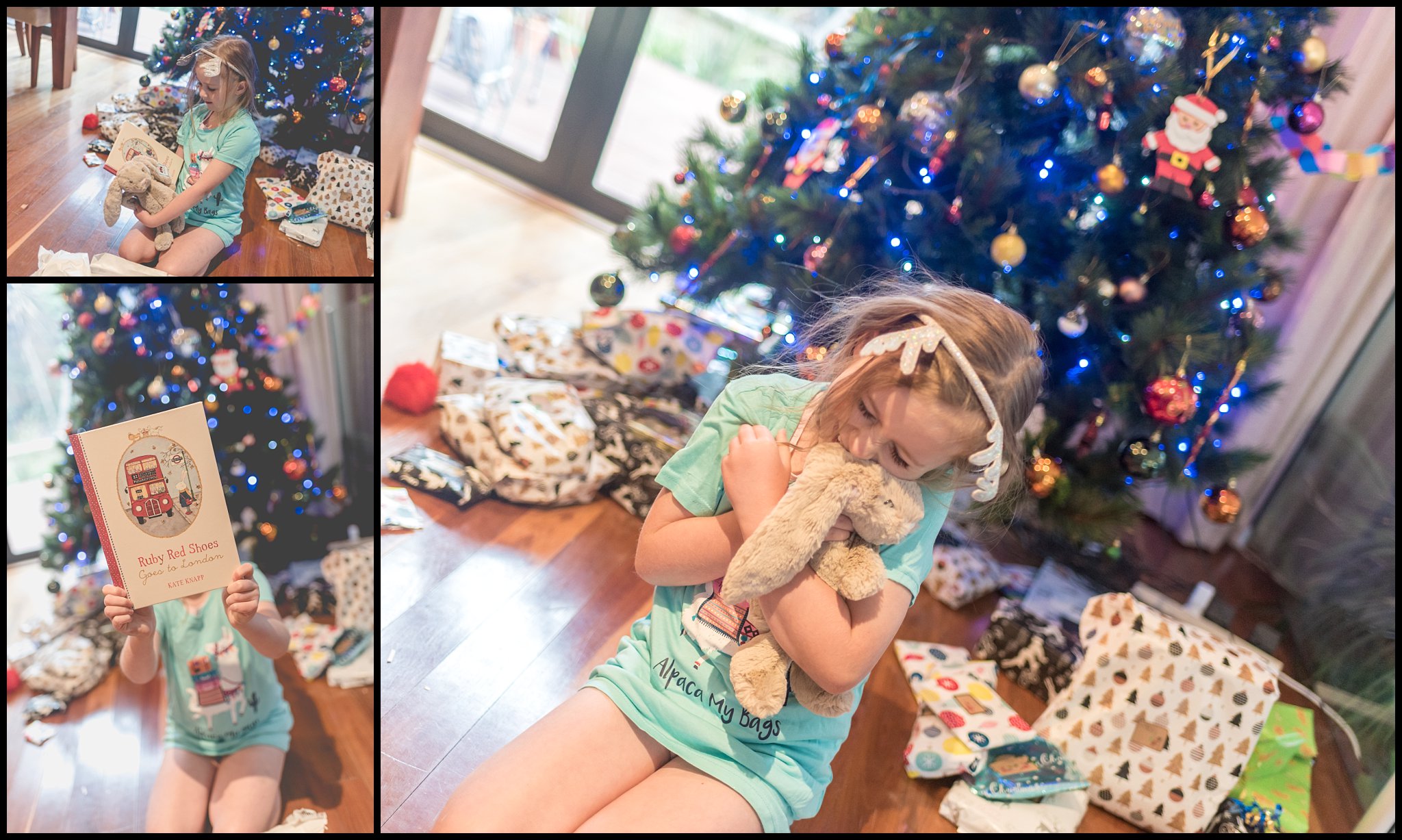 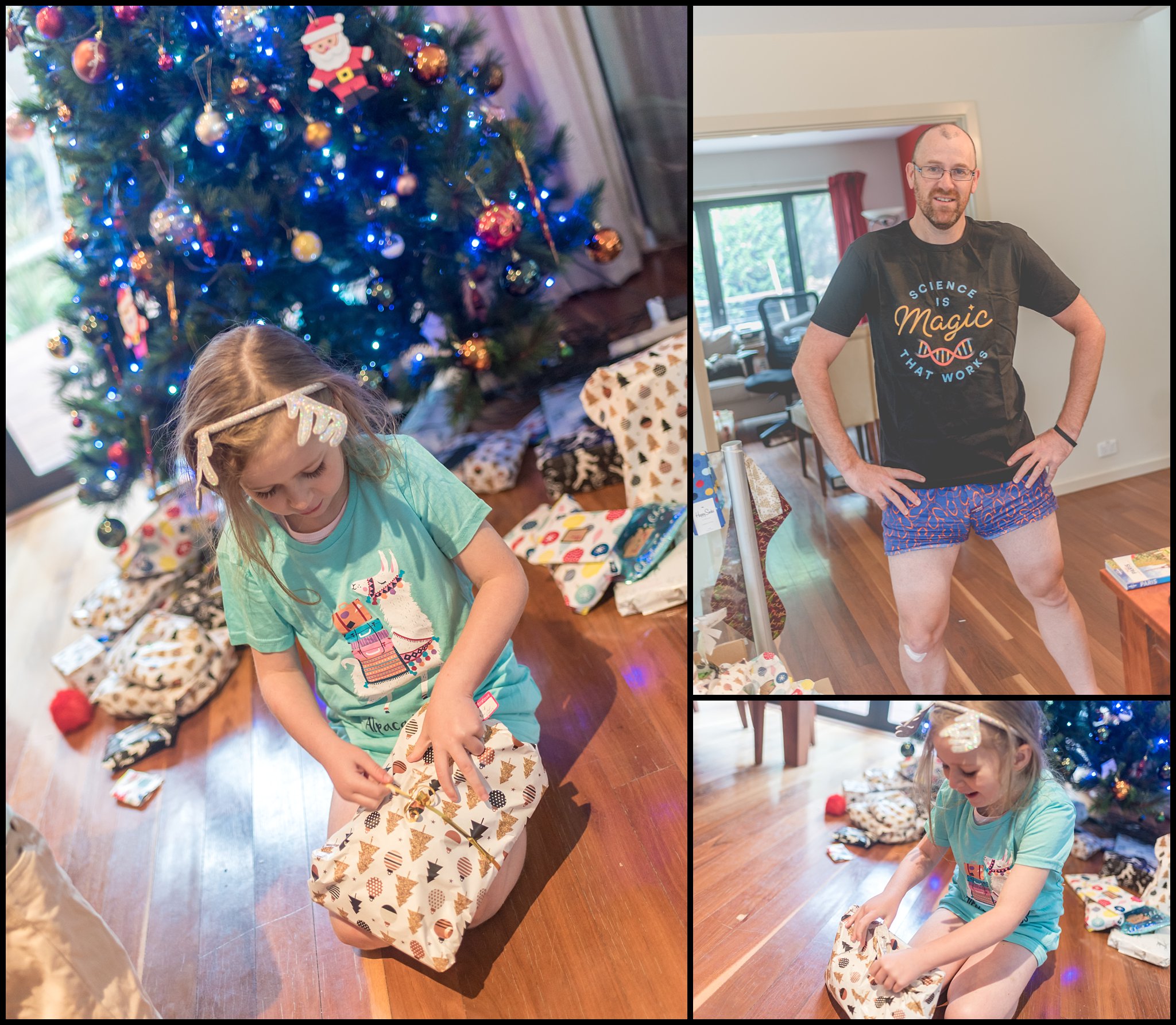 After the coffee had worn off it was time to break for breakfast.  Freshly baked baguette (the only real cooking of Christmas Eve), smoked salmon, garlic mushrooms and scrambled eggs.  A rather delicious start to a day with a lot of food! 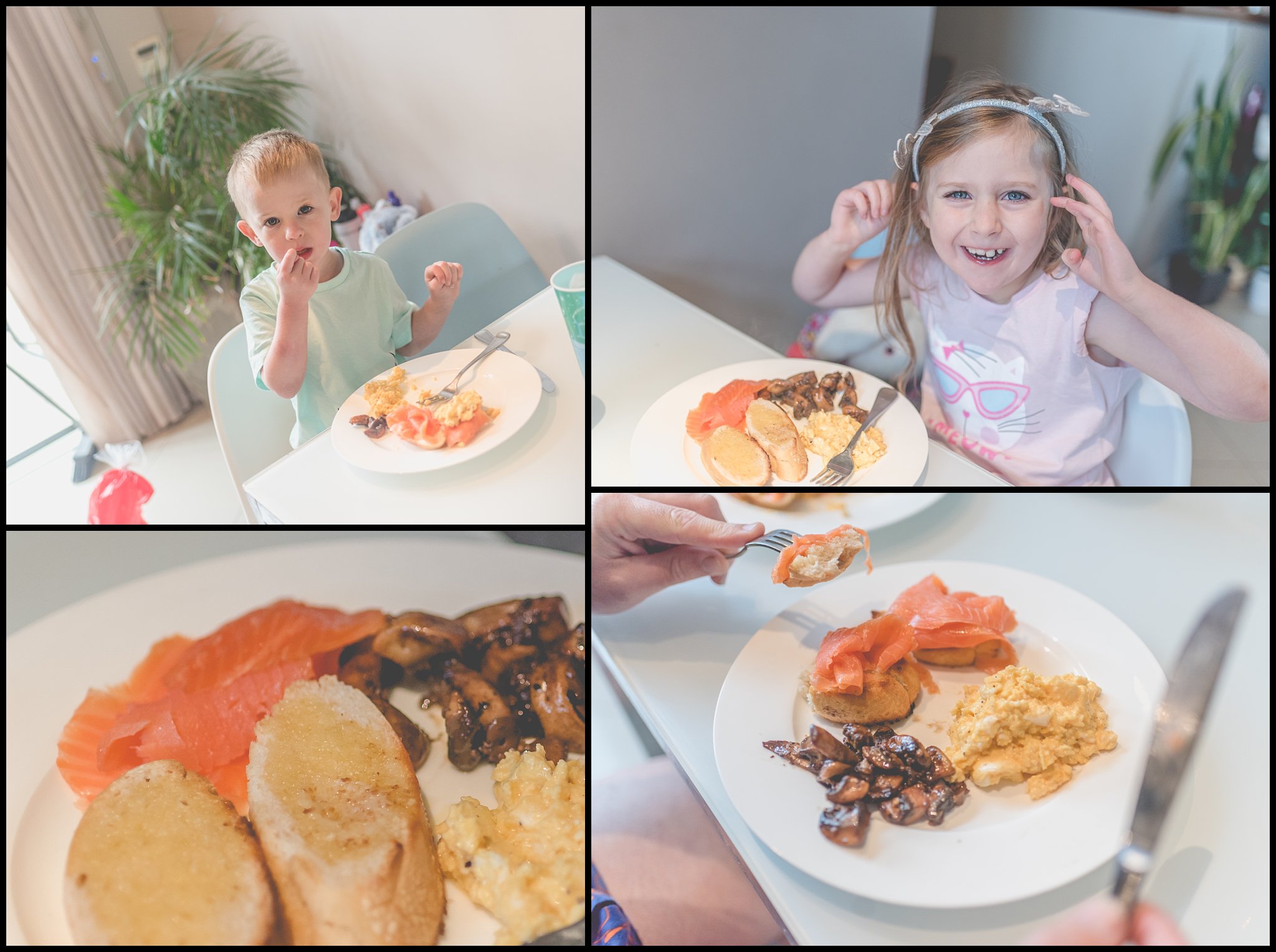 Tummies full, it was onto that second coffee and time to finish off the presents.  You’ll note that the kids (big and little) love to try things on as they unwrap them, which did make for some comical outfits……. 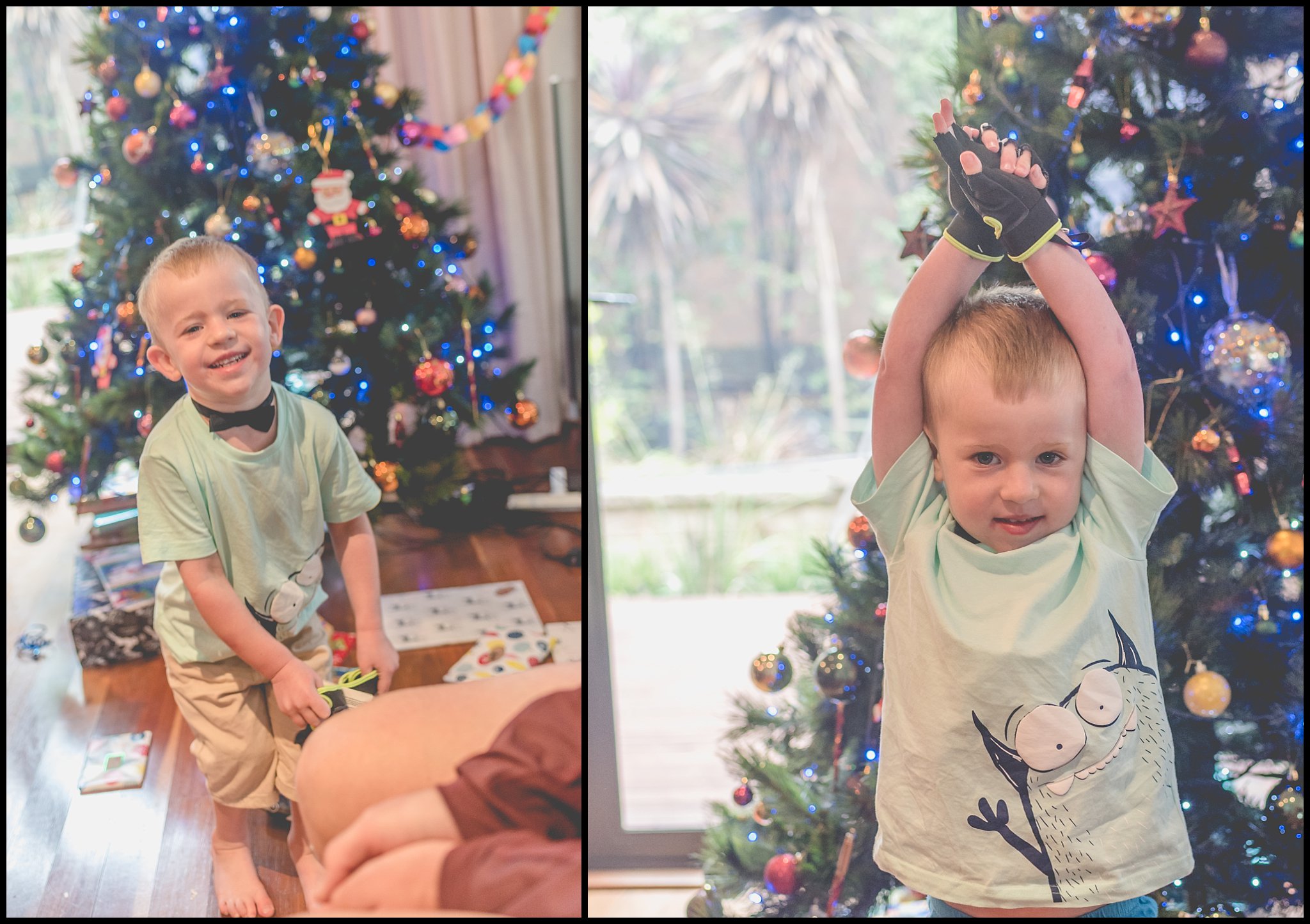 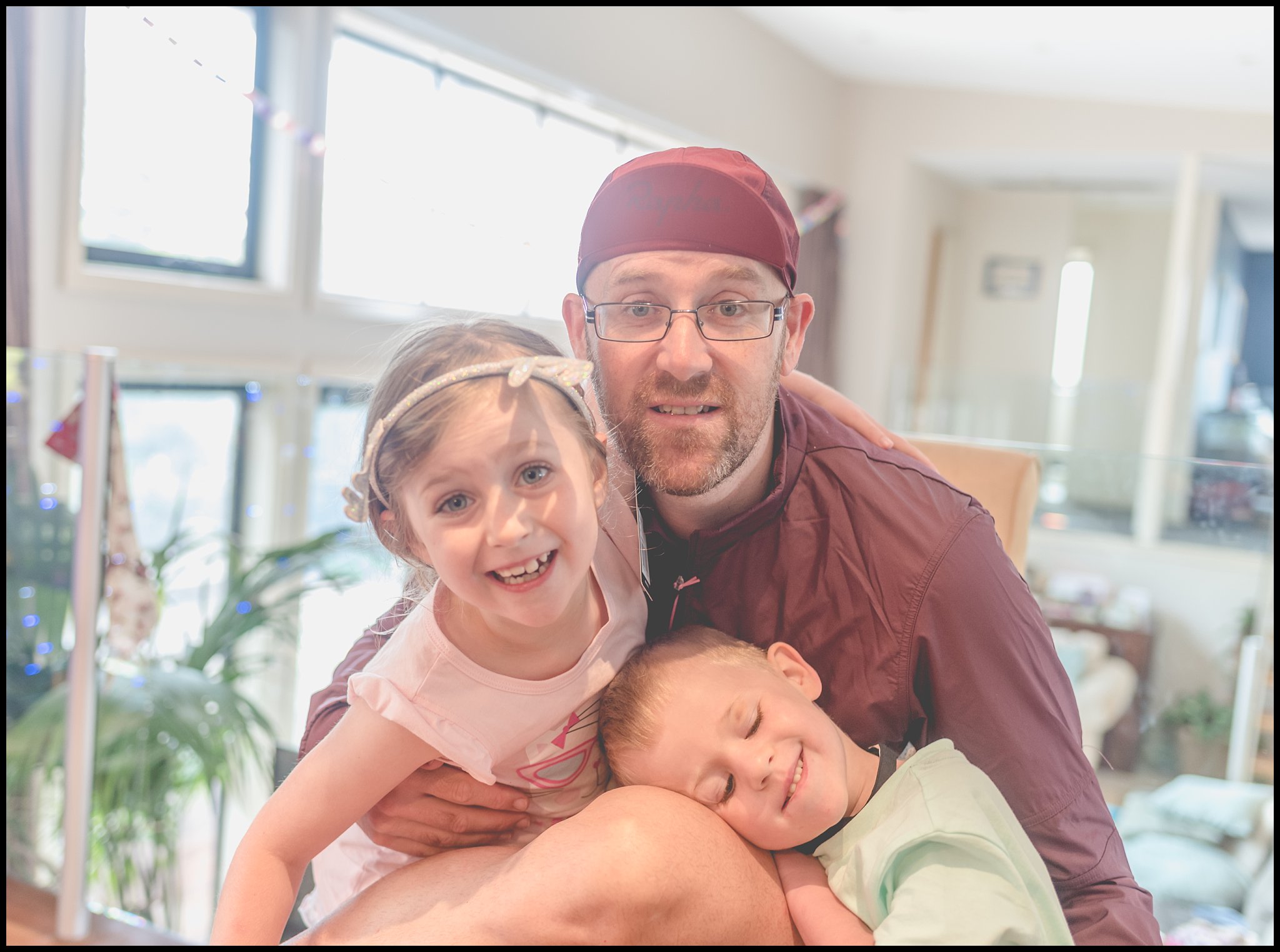 With the presents all unwrapped, the kids spent some time playing with their new loot and choosing their outfits for the day (the goggles were rather popular with Soren).

Anto had headed out for a ride in his annual quest to drive me insane by riding 500km during Christmas and New Year (don’t ask!)…….. Once he was back we were off to Andrew and Alison’s for Christmas lunch.  As usual the car was full to the brim with food, presents, and a bike …… since there was still more riding to be done for the day).

All the family were ready and waiting, and yes there were more presents! Cousin Bob (now on his second Christmas) was pretty into the present opening this year and was rather fond of some of Astrid and Soren’s presents too…….. 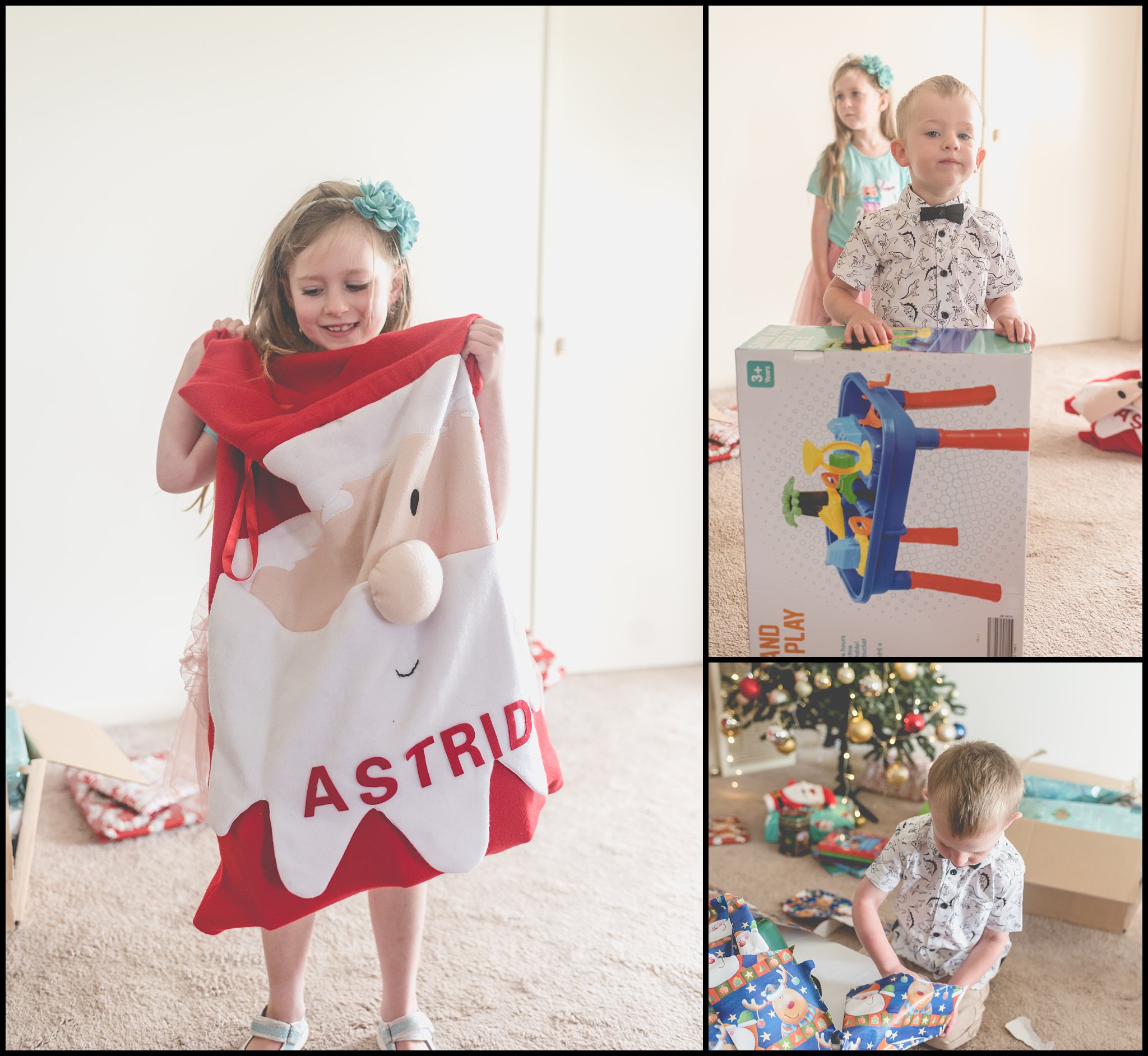 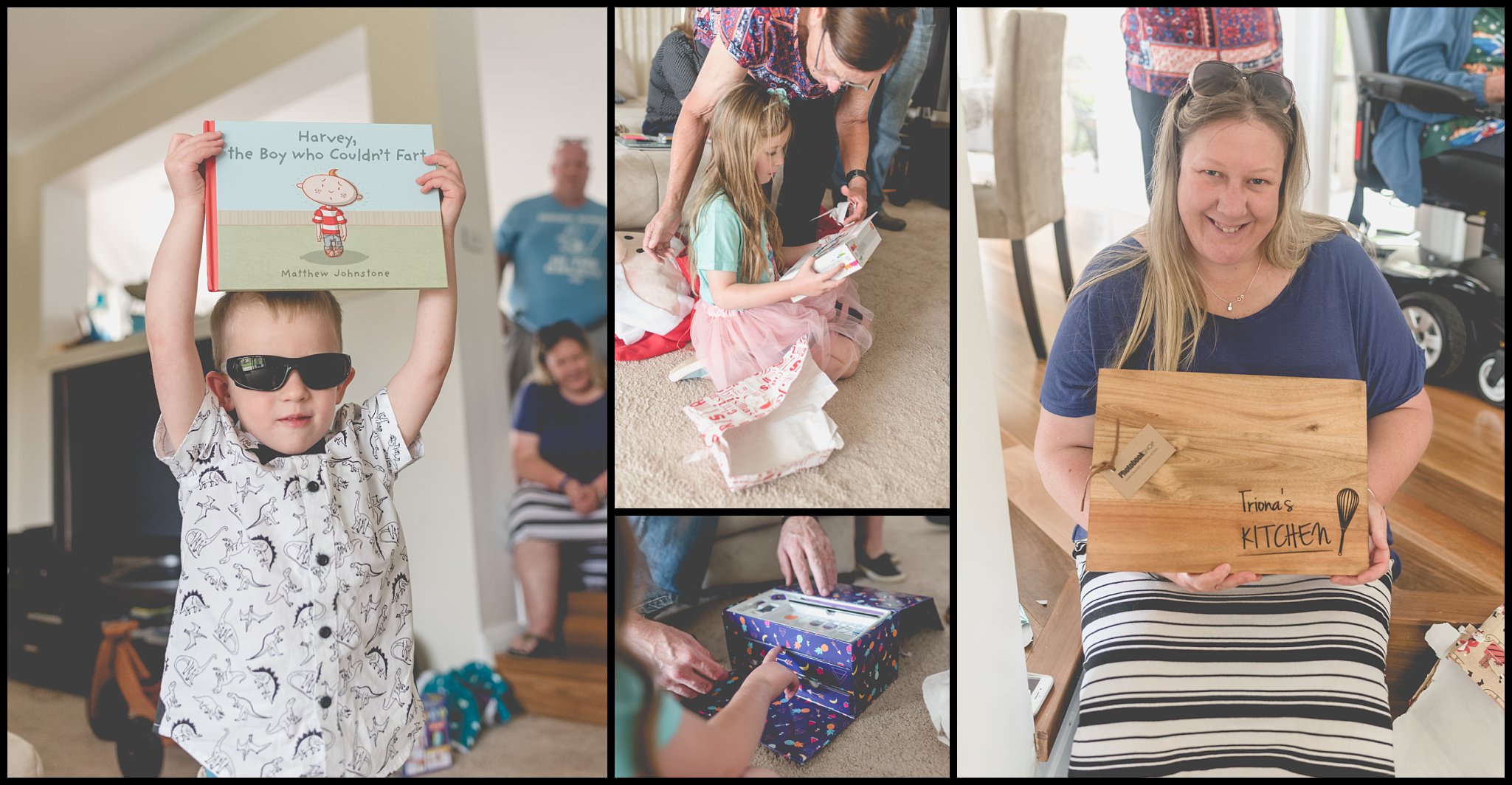 Finally it was time for lunch, and what a feast it was! As usual there was epic over-catering, but what is Christmas without stuffing yourself stupid on delicious food?
I can’t take credit for too all of it. Anto had whipped me up another delicious sweet potato souffle roll with Christmas stuffing for a vegetarian main, while the meat eaters got stuck into seafood, turducken, ham and we all had about 25 different salads to graze on……  Not to mention the punch, cheese, dips and antipasti. Yum! 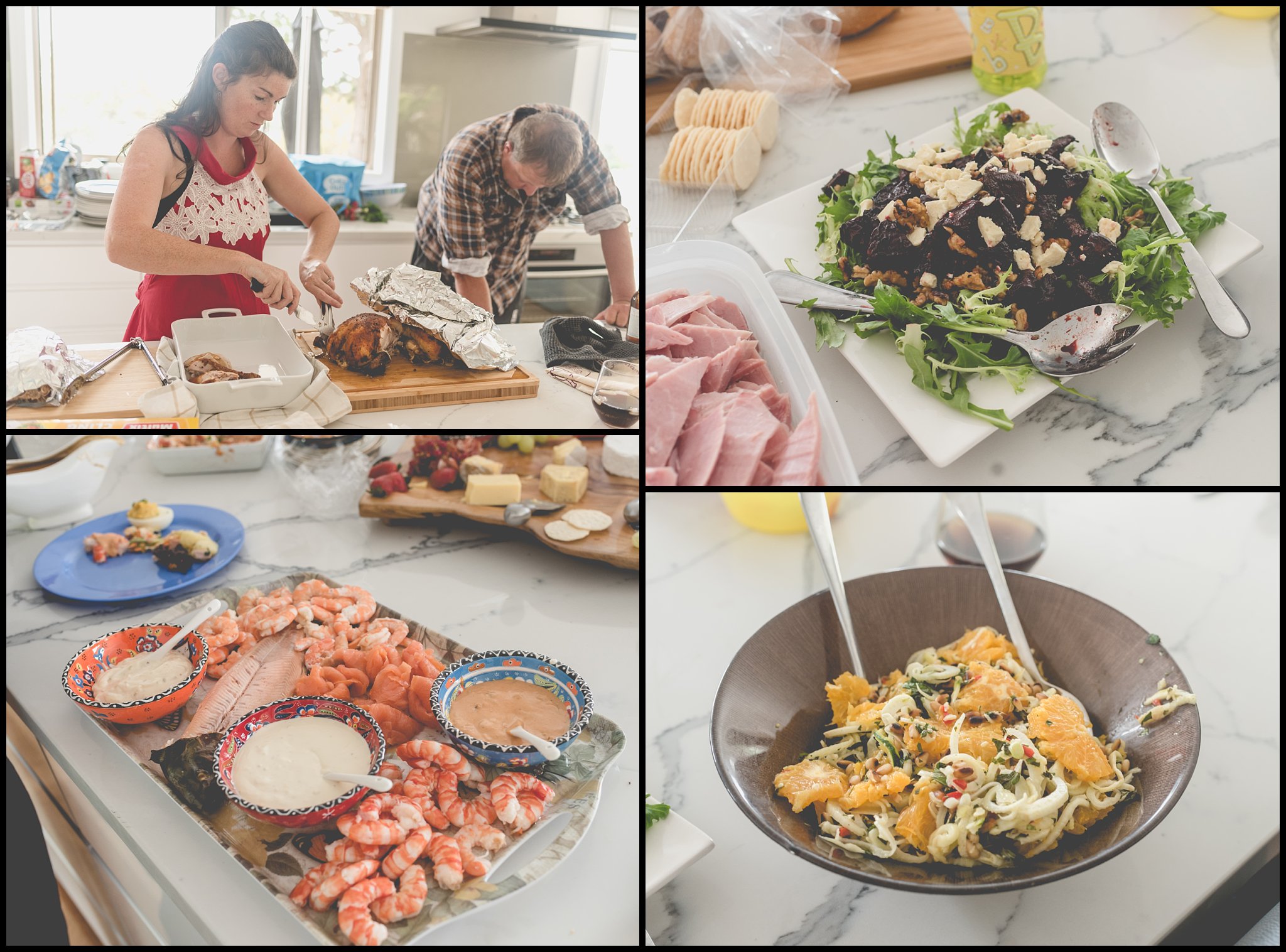 In a semi-food coma there was plenty of time for bubbles, and Christmas crackers while we desperately wished for a second or third stomach to fit in dessert. 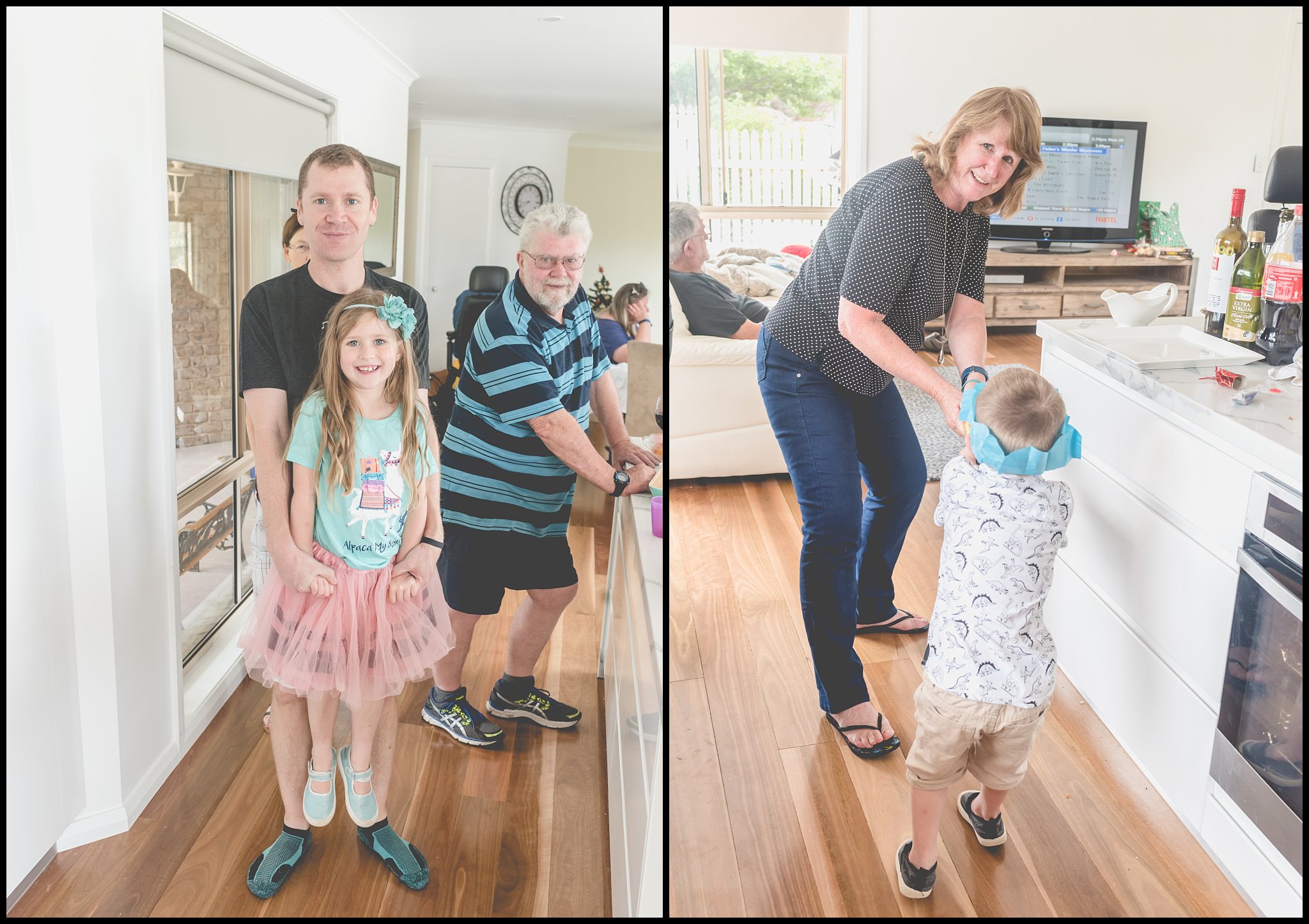 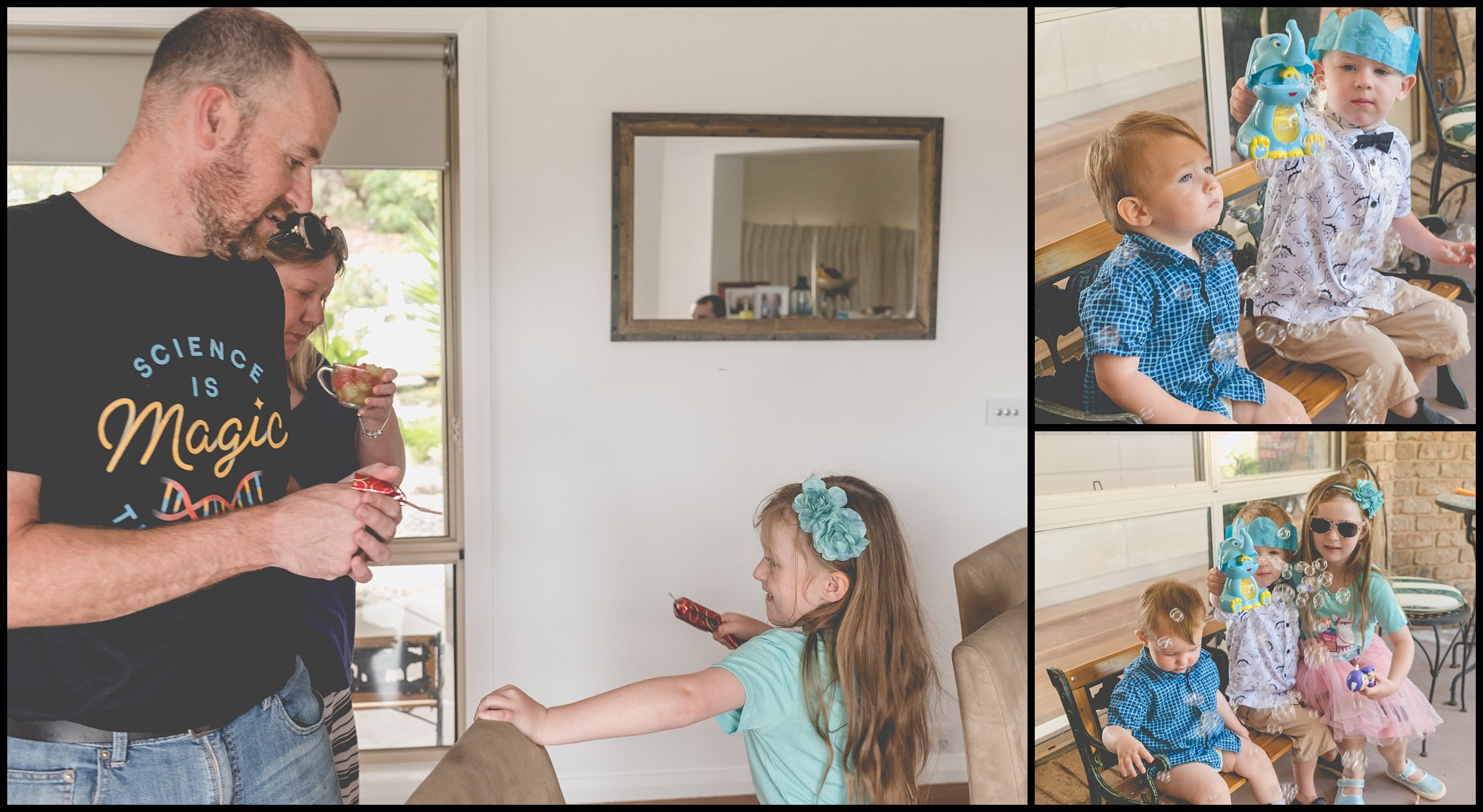 Anto and I were responsible for dessert – a steamed chocolate and clementine pudding with Anto’s awesome custard. Plus a peach and gingerbread tipsy trifle cake.  No one was remotely hungry by the time we’d gotten stuck into those….. 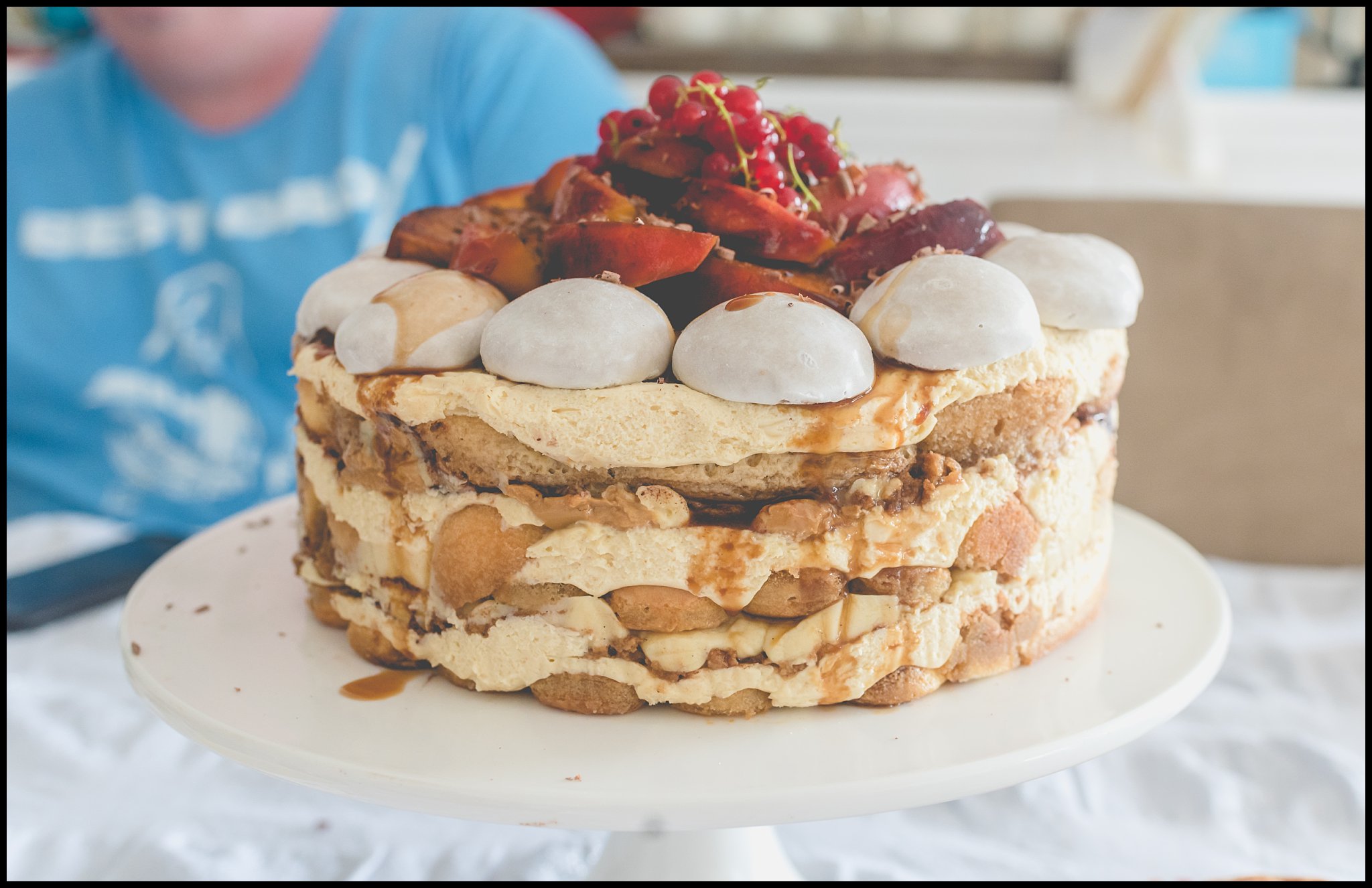 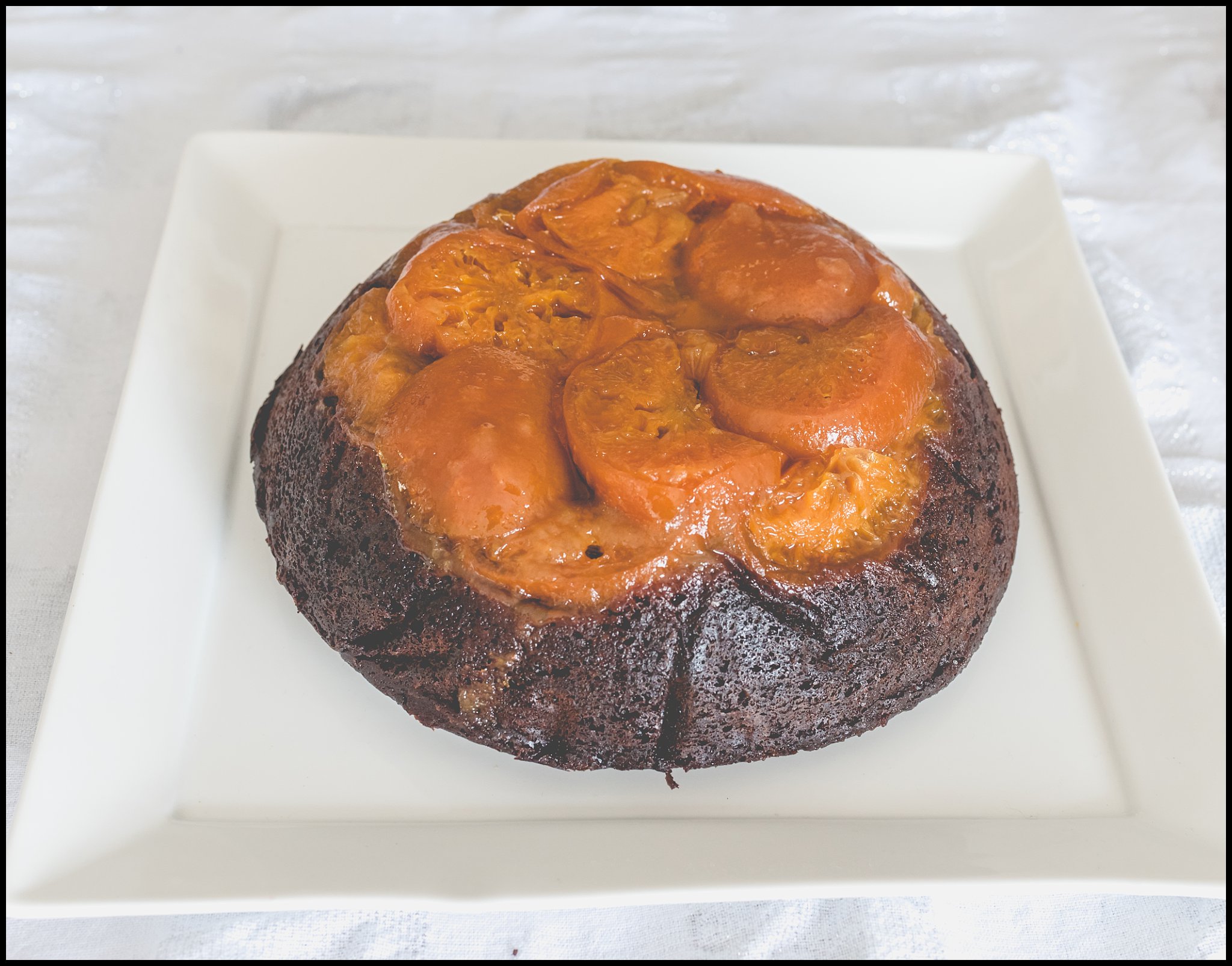 All now most definitely in a food coma, we spent the afternoon eating, drinking, digesting and catching up with family before trundling off home with tired but excited children and a boot full of food and presents (we always leave with just as much!). There was less bike in the car though as Anto did ride home – yes he is weird!

For the record, the alpacas had a pretty good day too, an evening walk and plenty of vegie and fruit treats, and a beautiful sunset…. 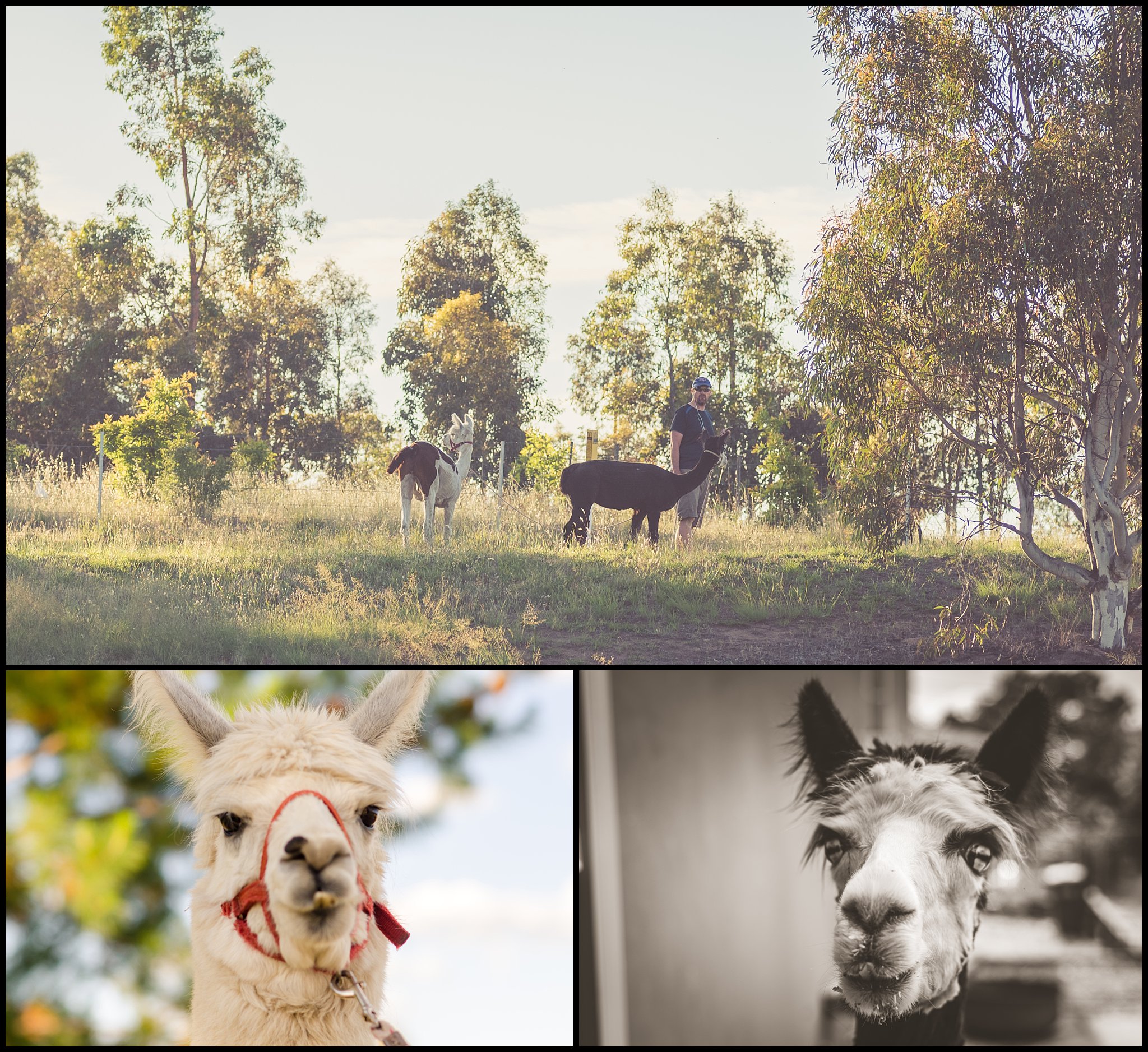 That’s a wrap on Christmas 2017.  The kids are already counting down to next Christmas…. 3 weeks on and I haven’t quite digested all the lunch yet! 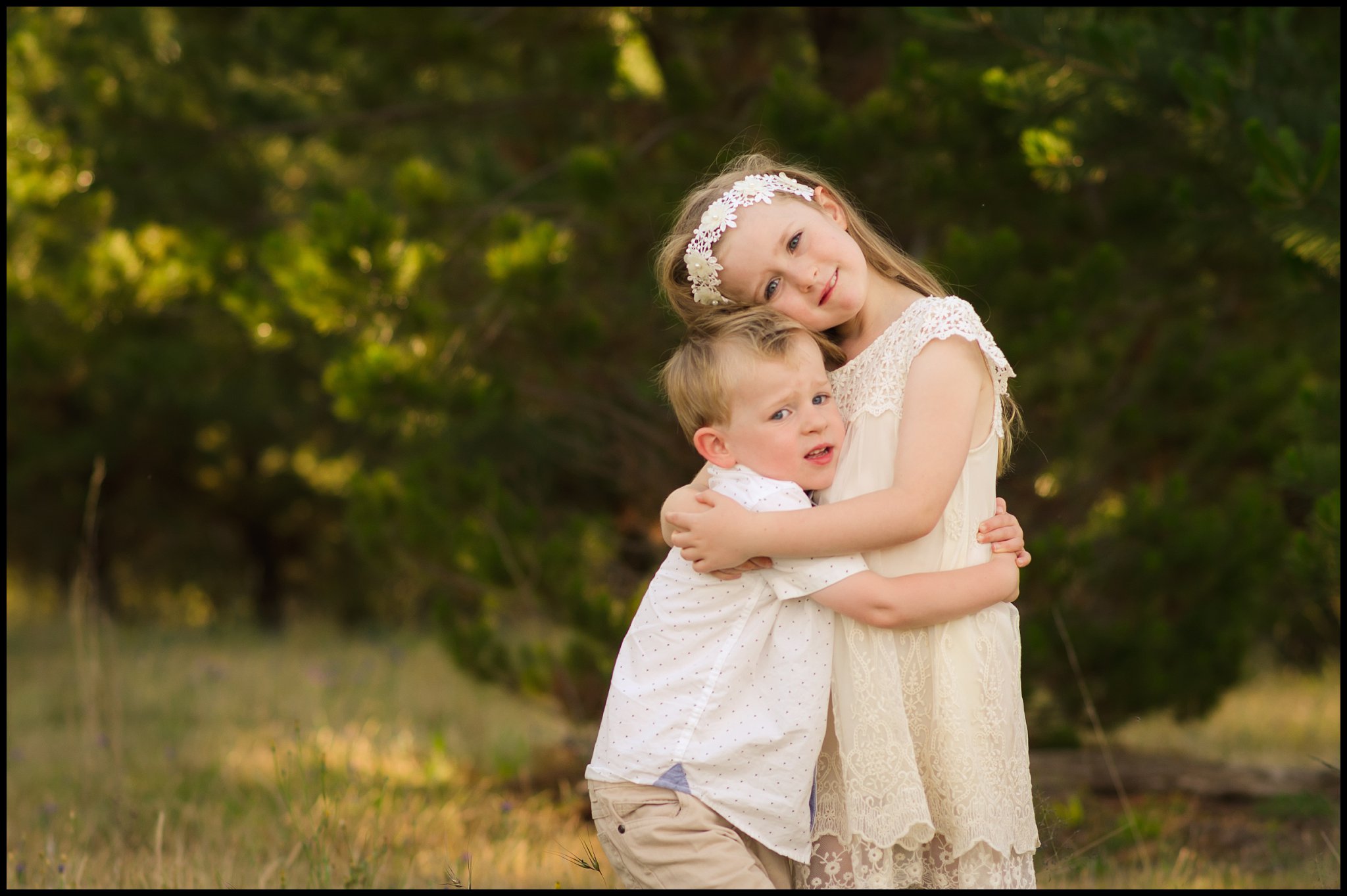 I hope everyone had a very merry Christmas and wonderful new year.  There will hopefully be many more posts full of fun, food and adventure this year ….and probably an alpaca or two!