This was our 4th visit to Paris in a little over 5 years and we thought we’d try to do a few things we’d never tried before. As my mum was also in Paris, we’d agreed that a food tour would be interesting and something a little different. In Paris there are a lot of food tours to pick from, but our love of Parisian pastry meant that a chocolate and pastry walking tour was a good option. We also chose a food tour in the Saint-Germain-des-Prés district as it’s an area we had not explored much during our Paris visits and it is well-known for its excellent food.

After Di’s (Granny’s) late arrival the night before the kids predictably woke up early around 6am, excited to see Granny. Lucky my mum didn’t need lots of sleep to get over her jet lag or anything!

As we were about to embark on a big day of eating we had breakfast in the apartment of egg, bacon and mushroom galettes, without the addition of fresh pastries.  We figured we’d need the stomach room later.

The kids were rather excited about the food tour, and after already being up for several hours we ended up leaving early so we could wander Paris a little.  Having arrived in the dark we showed Granny the way to the metro and introduced her to the joys of riding packed peak-hour metros in Paris (which are still less busy than Hong Kong!).  We metro’d over to Saint-Germain-des-Prés which is one of the four administrative quarters of the 6th arrondissement, located around the church of the former Abbey of Saint-Germain-des-Prés. Despite heading out in peak hour, the metros were again exceedingly efficient so we arrived about 45 minutes early so had a wander around the neighbourhood, marvelling at the many beautiful restaurants and apartment buildings. Oh to be able to afford to live in some of these! 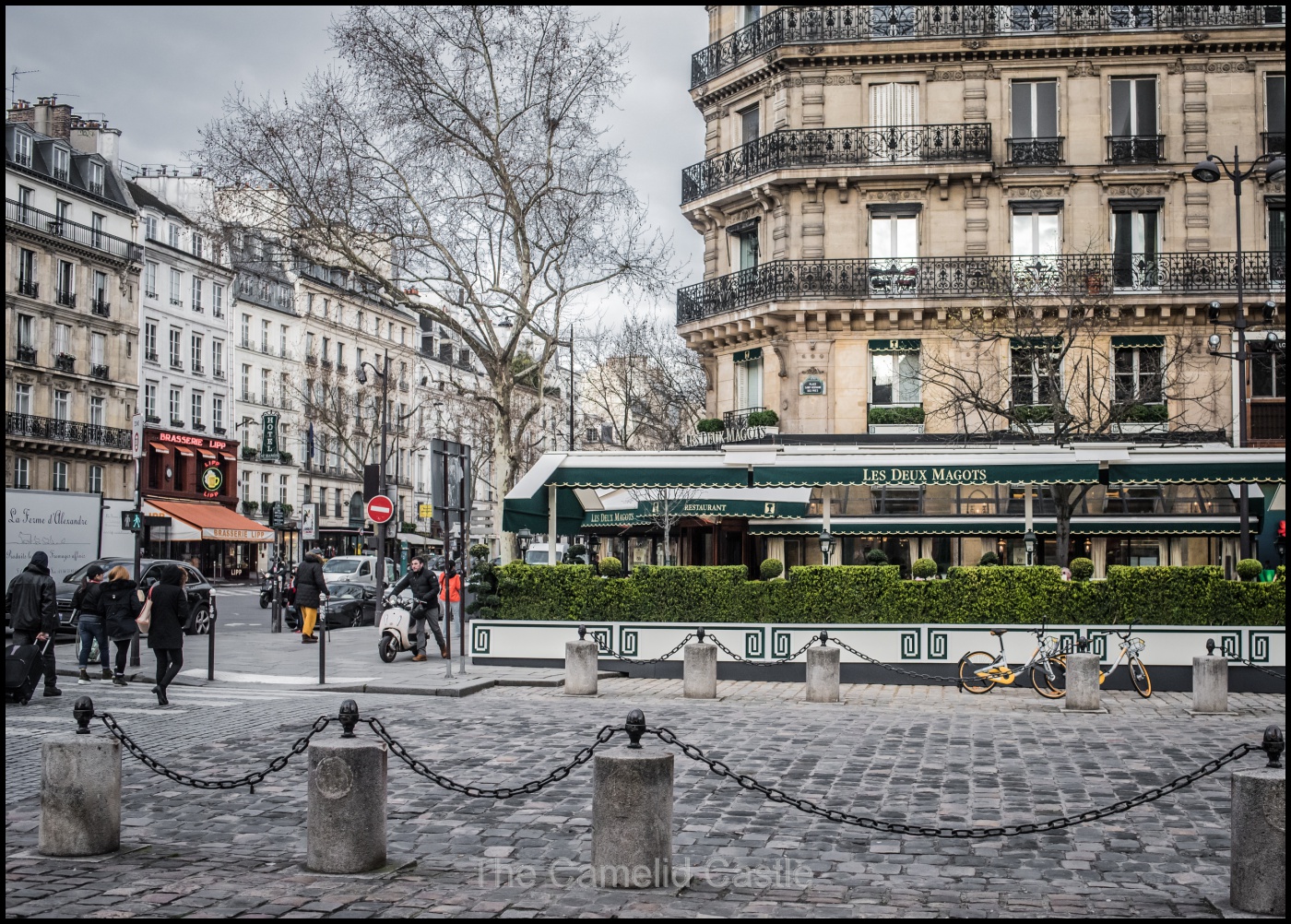 Soon it was time for the tour to start. We’d booked the 3 hour family pastry and chocolate walking tour with ‘Meet the Locals’. Our guide Nathalie arrived right on time.  The tour was just for the 5 of us, which is always ideal with the kids.

Nathalie had bought us all a chouquette. This is a French specialty, a baked and fluffy pastry consist of small-sized dough sprinkled with pearl sugar. They were warm and delicious!  It was then off walking with a bit of history about the Saint-Germain-des-Prés district over the preceding centuries and the destruction of Abbey to make the boulevards wider.  We also learnt about the 3 famous cafes in the district – Les Deux Magot, Café de Flore, le Procope, and the Brasserie Lipp, some of which we’d already walked past. 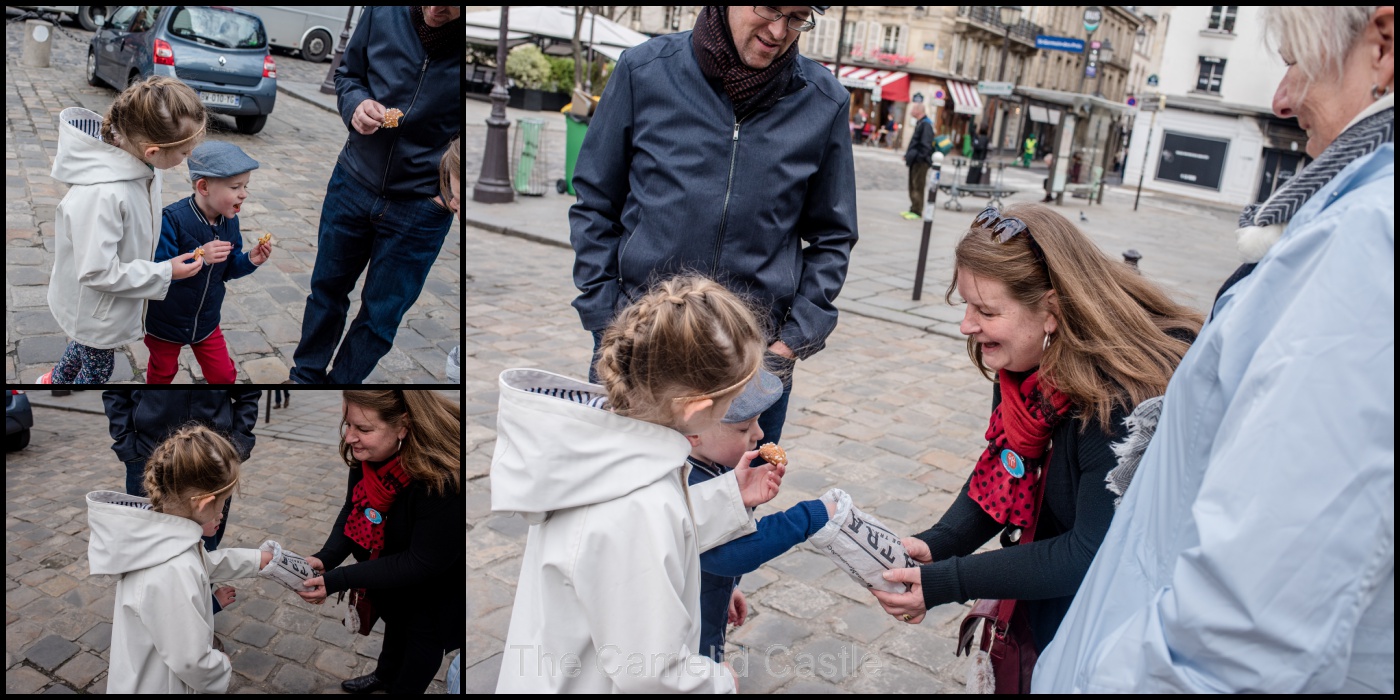 Our first stop on the tour was the chocolate shop Debauve & Gaillet, a 200-year-old chocolate shop that developed the ‘pastille’ the first ever individual chocolate to disguise the taste of medicine that Marie Antointette needed to take for her headaches.  We tried various flavoured pastilles – including vanilla, hazelnut and dark chocolate.  While they were tasty, there were far more interesting things elsewhere in the shop and we ended up purchasing some fabulous nougat. 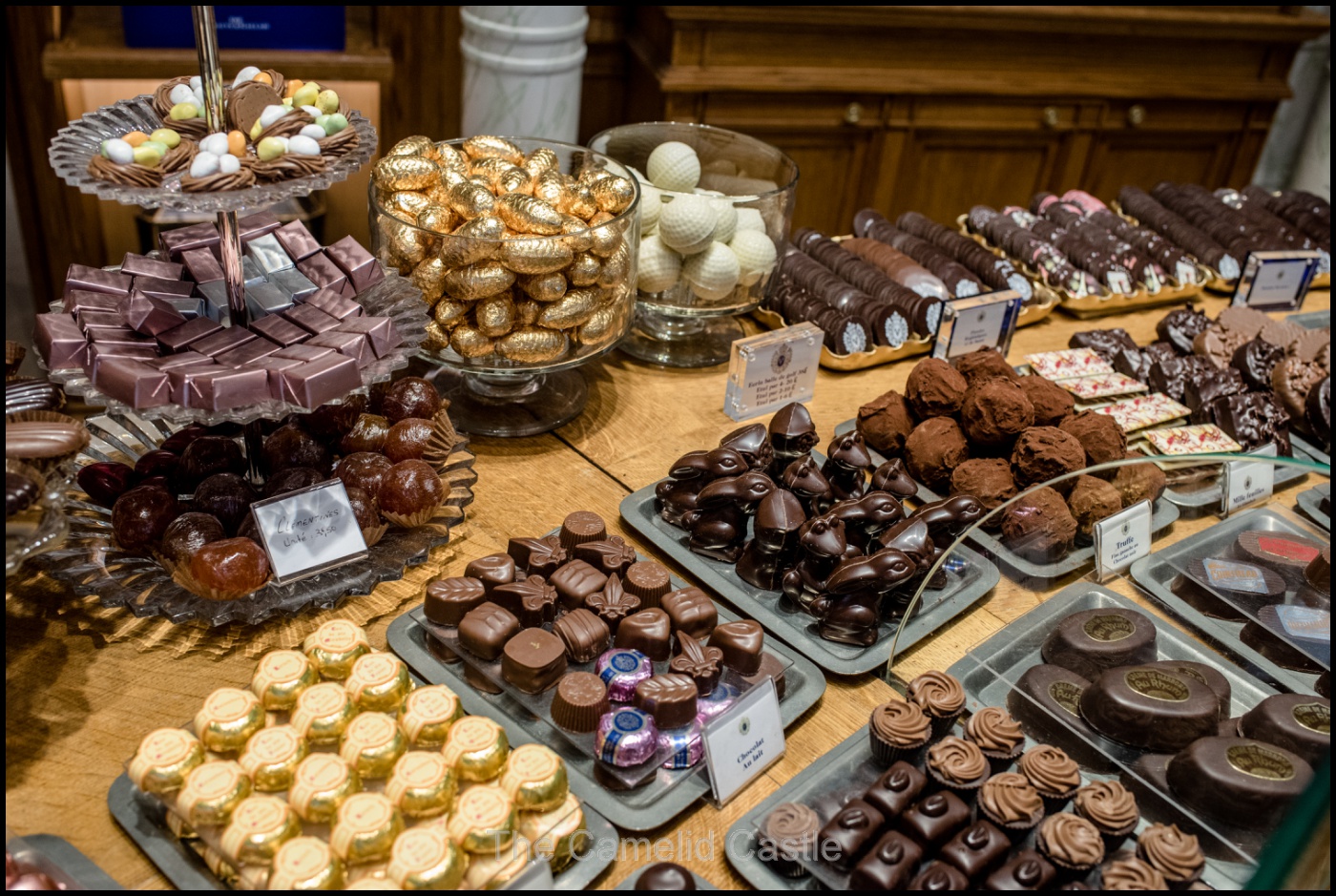 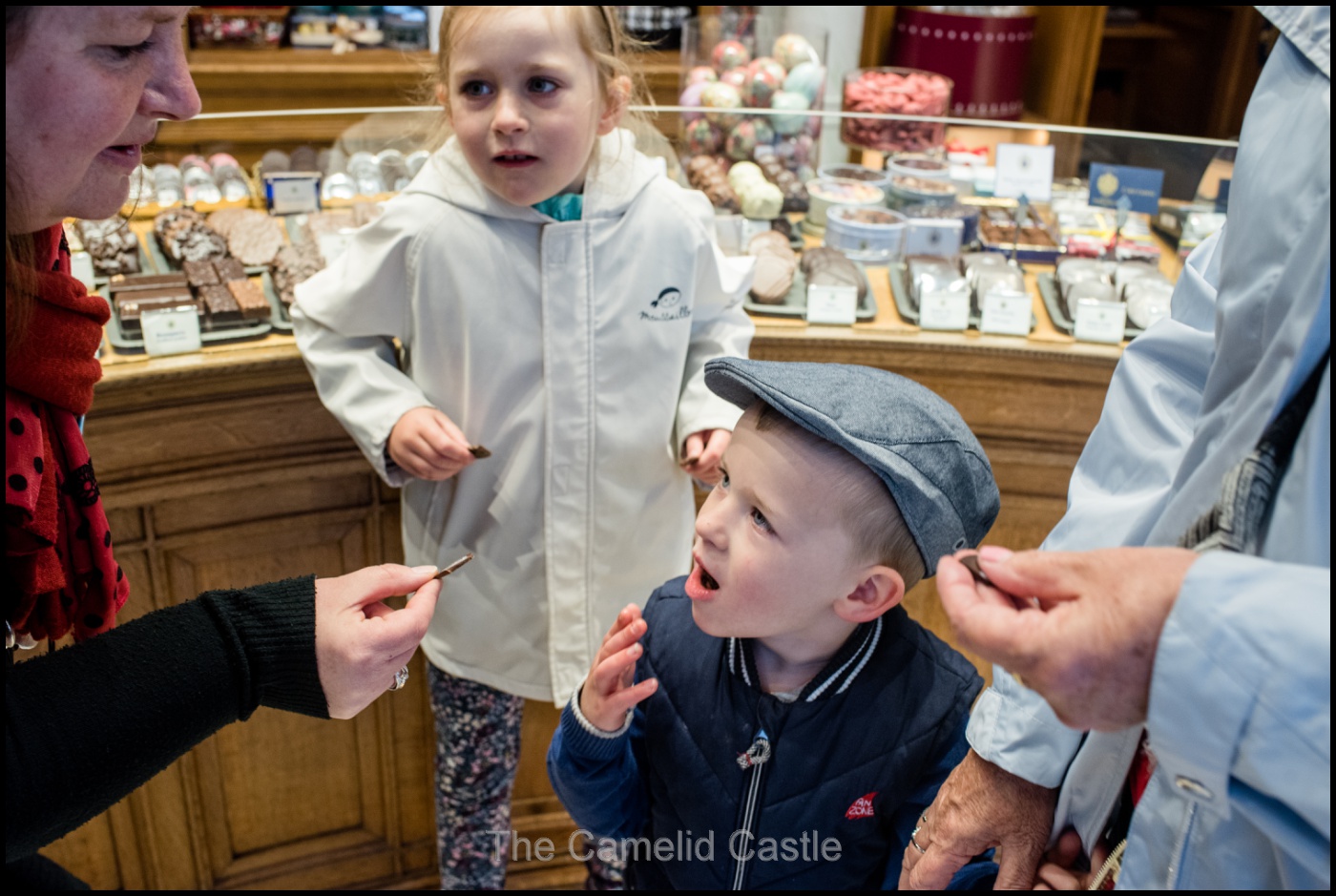 Our second stop was the very famous Ladurée.  We had actually been to Ladurée several times over the years but never the Saint-Germain-des-Prés store (which I didn’t even realise existed).  I do love a Ladurée macaron, and sure enough we were there to taste macarons.  We selected various flavours, including citron, coconut and lime, coffee, pistache and salted caramel. All were delicious but I’m quite partial to the salted caramel! 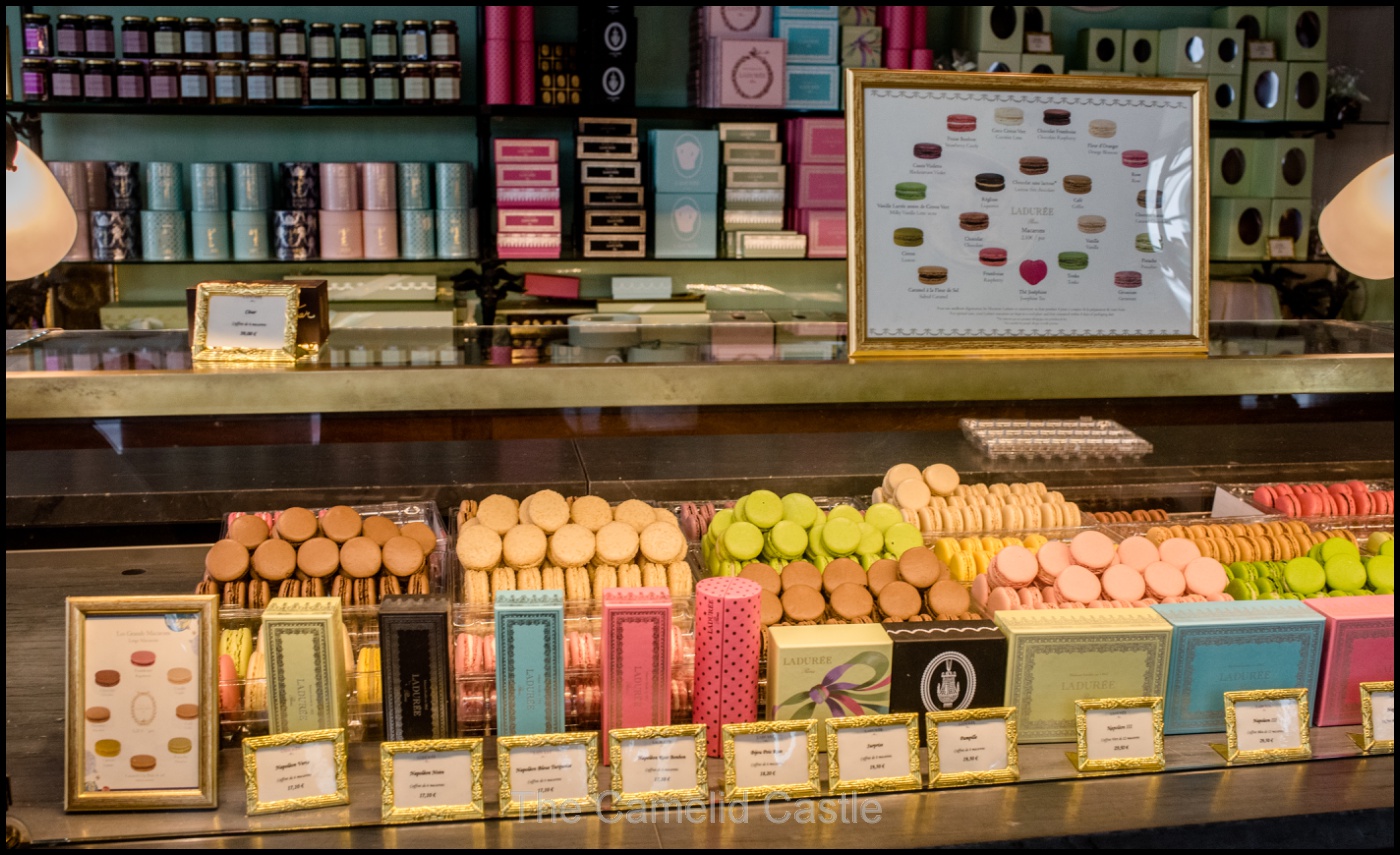 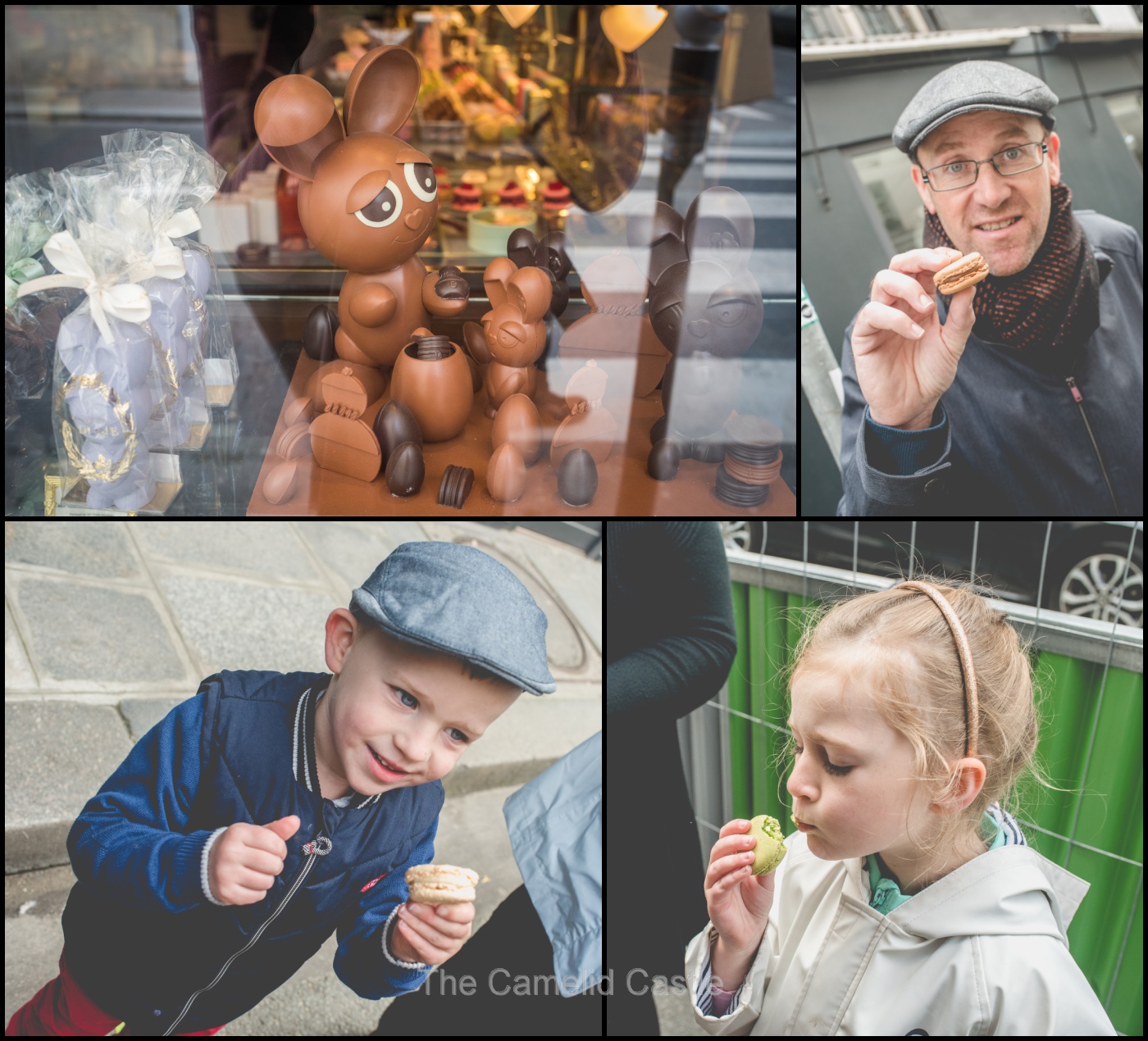 Speaking of salted caramel our next stop was at chocolatiere ‘Henri Le Roux’, who is famed for inventing the ‘salted butter caramel’.  We were asked to select a variety of caramels to try.  We ended up with citron, chocolate and the salted butter.  All were very good but the salted butter caramel was delicious, it had an interesting texture which is from the addition of crushed hazelnuts, walnuts and almonds.  I insisted that we might be needing some of those caramels to take with us so Anto wisely procured a packet.

Our 4th stop was ‘Meert’, another famous confectioner and chocolatier.  The Meert chain originated in Lille, in northern tip of France in French Flanders. It is not surprising that one of their specialties are waffles, that are very similar to Belgian and Dutch ‘stropwaffels’.  We are a fan of stropwaffels and these were also thin waffles, but rather than a sticky honey like filling that stropwaffels have, they had various flavours encased in the waffle. We tried the vanilla, pistache and speculoos.  All were delicious but the pistache was amazing.  They were way too sweet though and our already sugar laden bodies couldn’t cope so we decided to keep some for later! 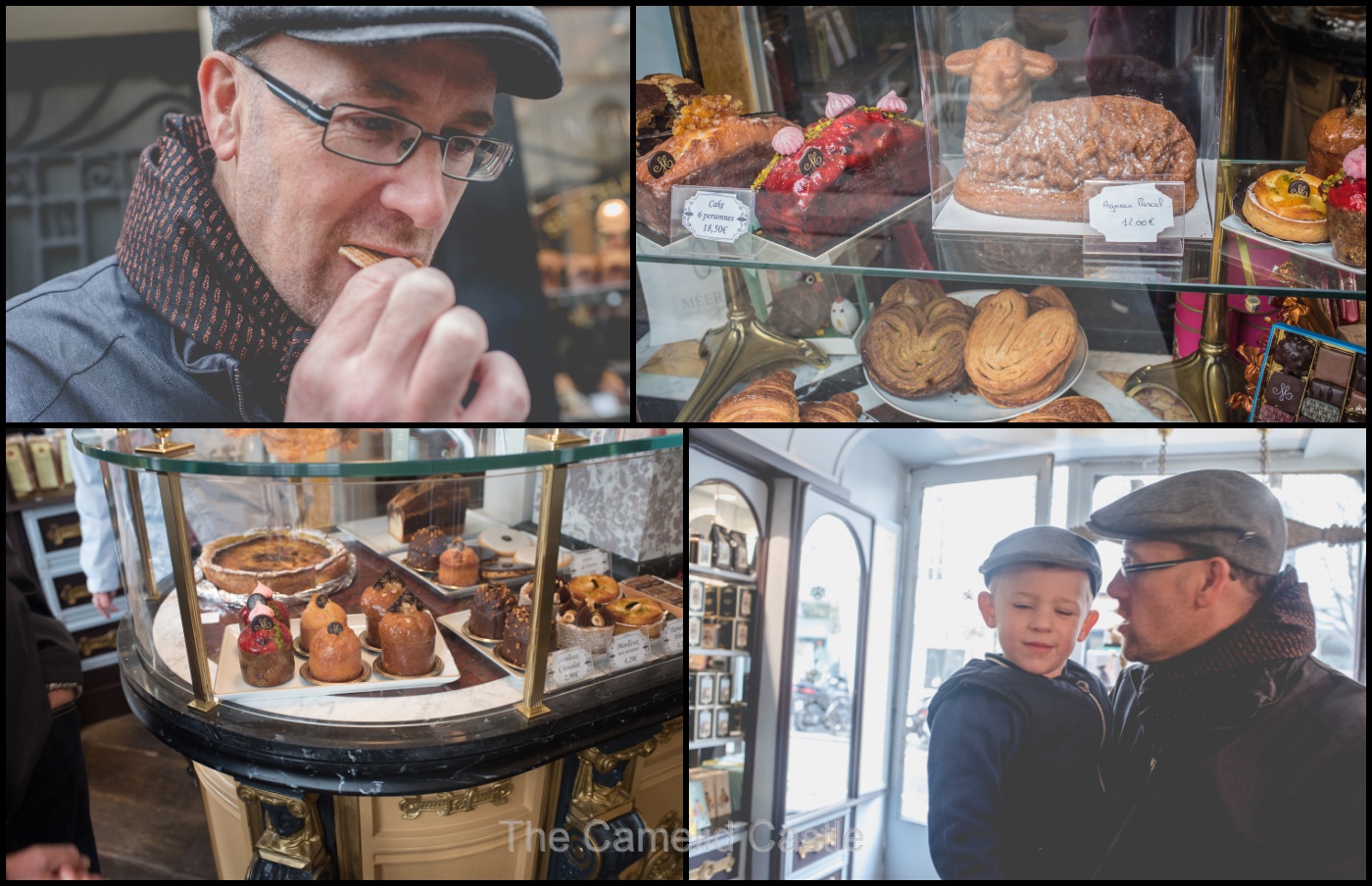 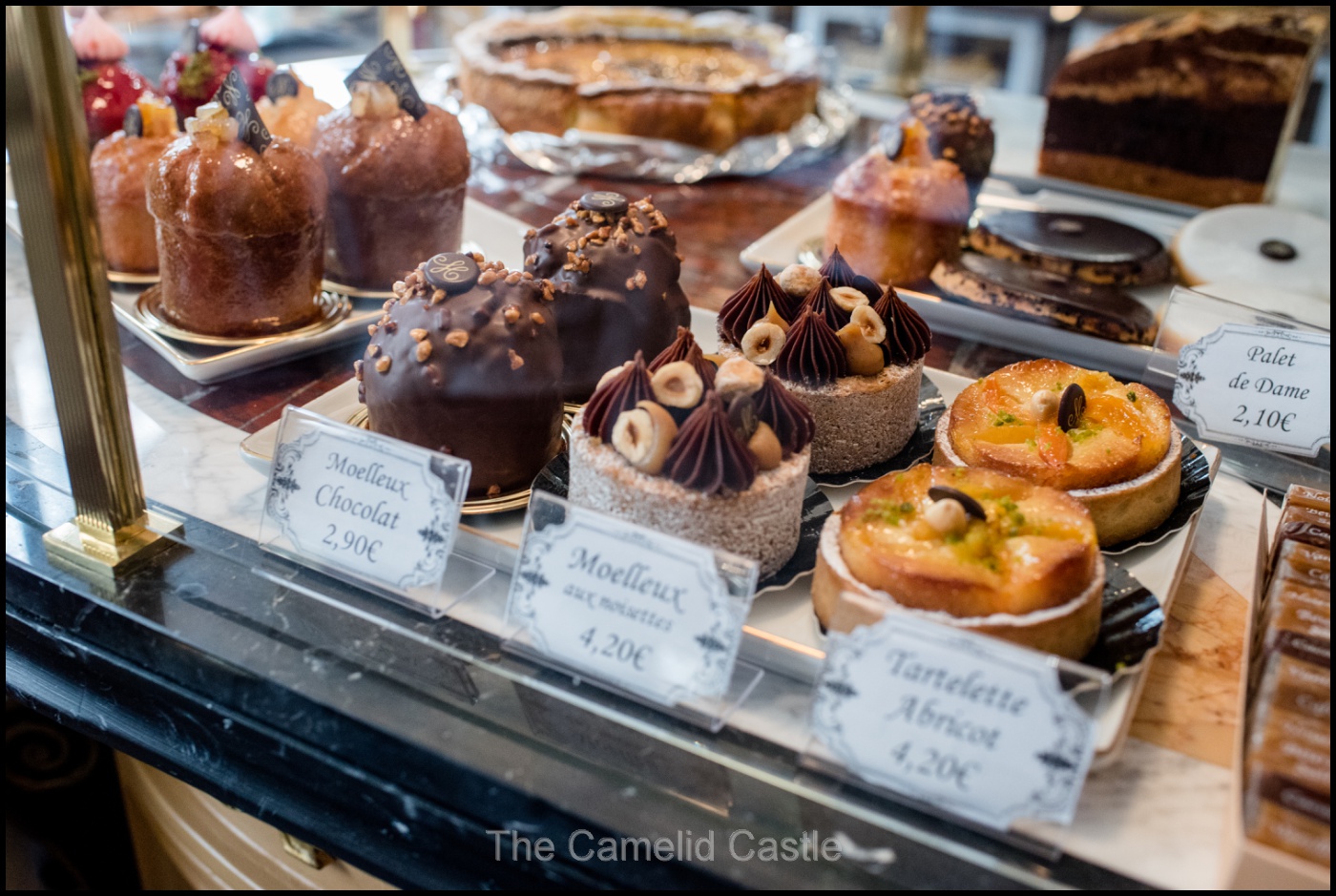 Meert had the most wonderful selection of pastries, and being the Easter weekend a range of Easter lambs made from cake (which seemed to be selling fast).

Our next part of the tour took us through various passages that were beautiful and similar to ones in the other arrondissments of Paris. We also walked past ‘Le Procope’ which is the oldest restaurant in Paris.

Our next stop was ‘Maison Georges Larnicol’, another place we’d never visited.  The selection of chocolates, biscuits and cakes was amazing but the brand is known for their flagship product the ‘Kouignette’ a small round puff pastry, crisp on the outside and soft in the middle (and seemingly soaked in syrup in most cases). There were various flavours to choose from and we picked a chocolate, a salted caramel, and an orange & pistachio.  If we didn’t want the Kouignette we were allowed to pick from the chocolate selection, which was Soren’s preferred option, so we added some additional chocolate to our take home stash! 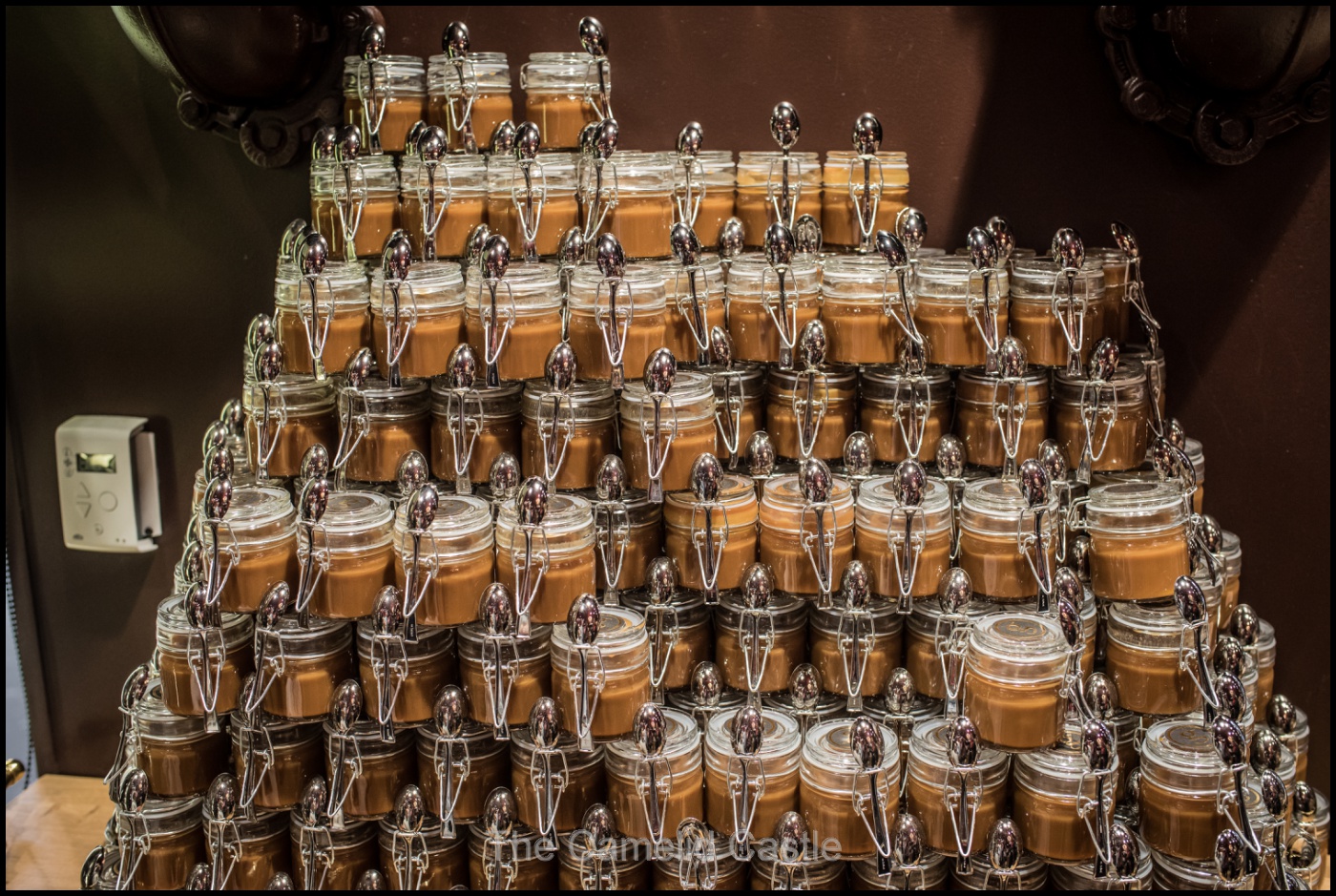 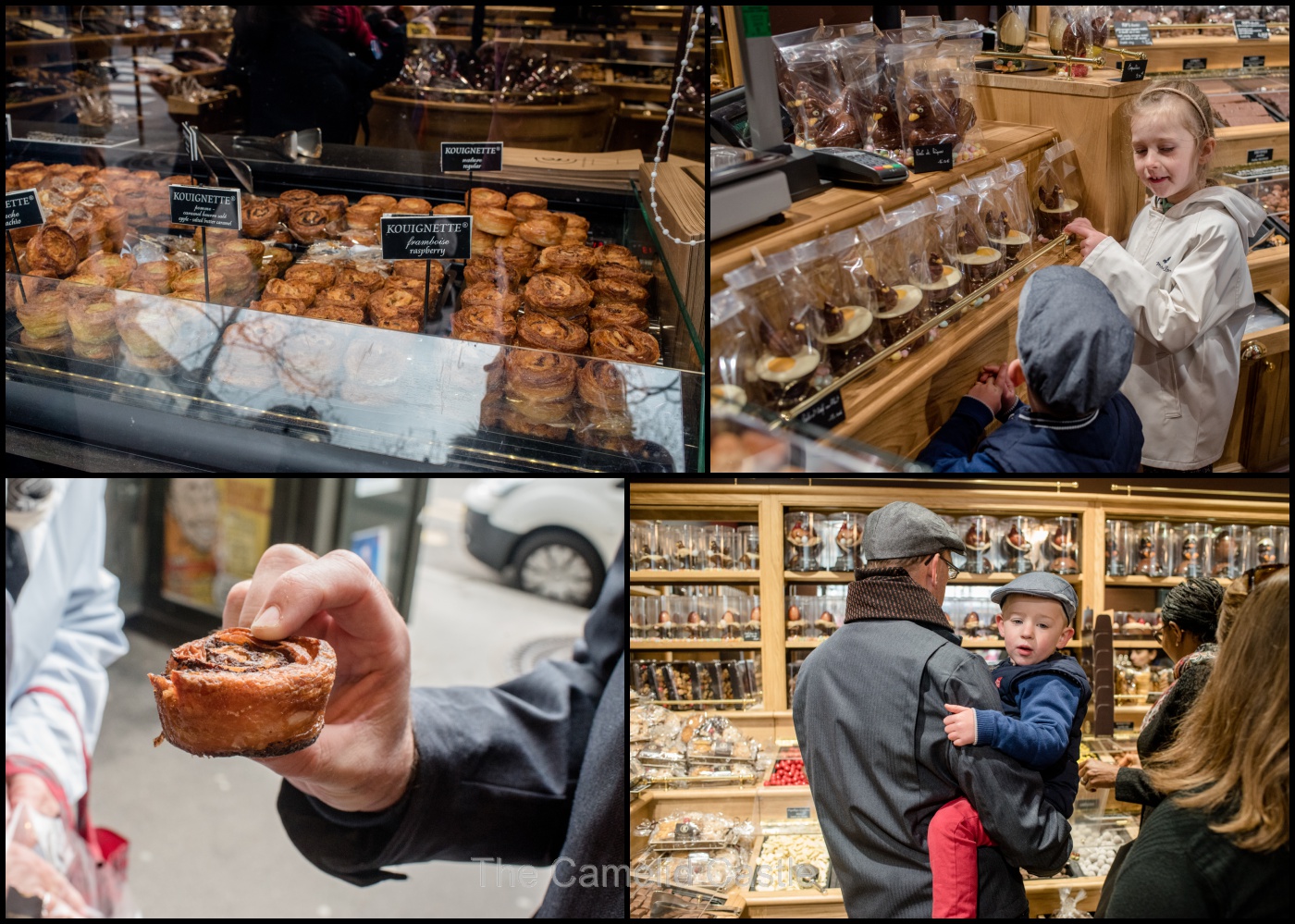 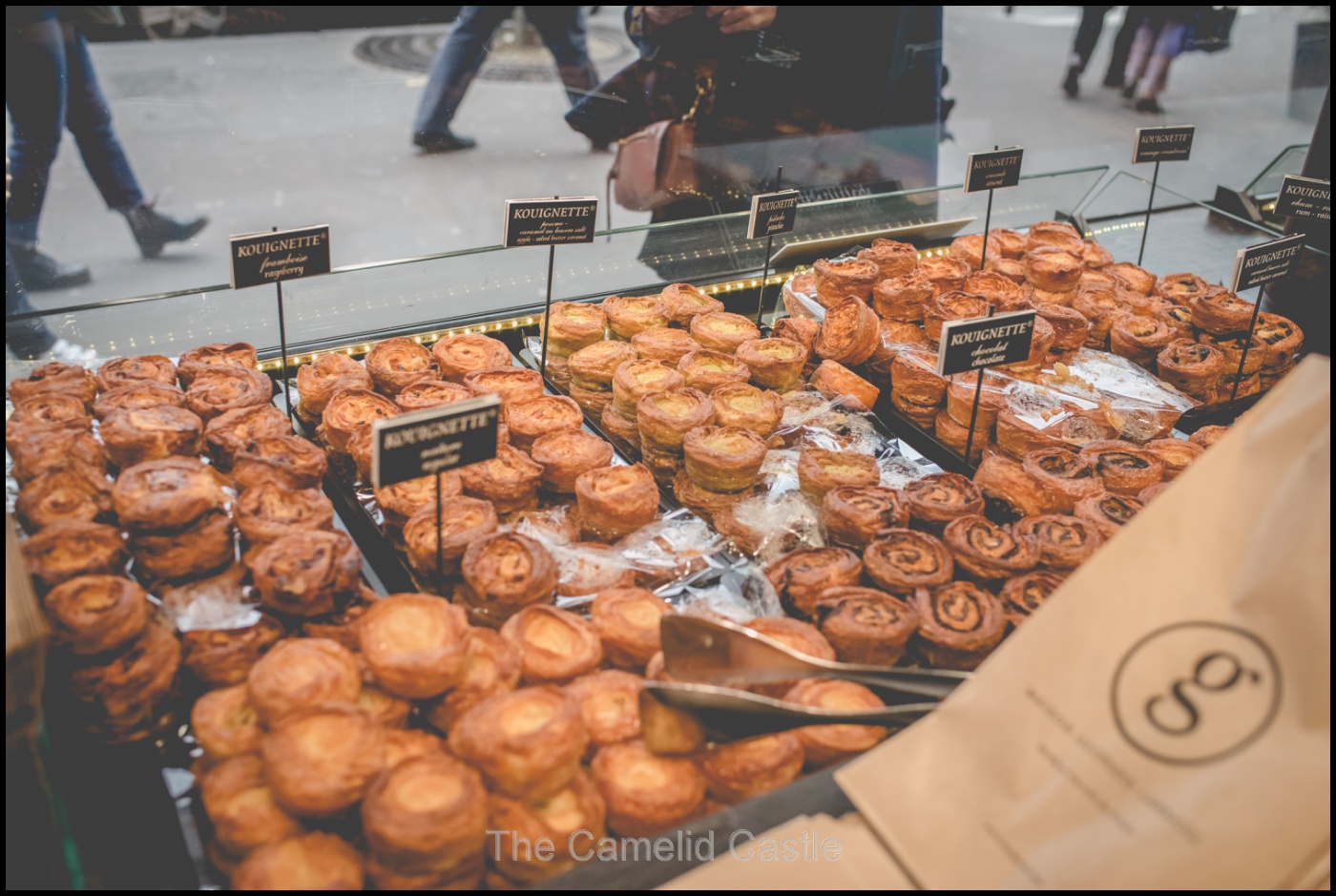 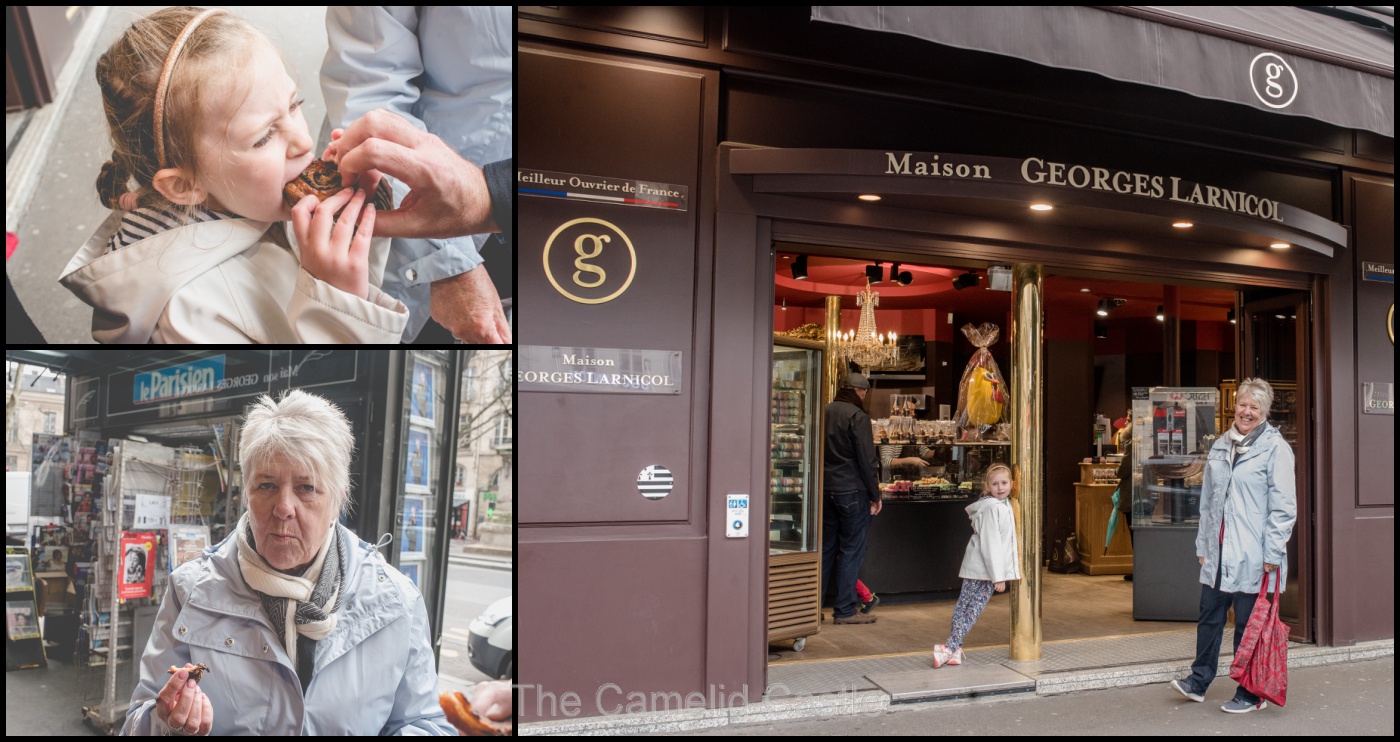 Outside away from the tempting selection and we all had a bite of the Kouignette, they were delicious, but we were now starting to be rather full, so one bite was enough and the rest were in the bag to take home. We realised we really should have tried one of the savoury Kouignette options, maybe next time!

Now on a sugar high it was off to our next stop, where we were promised chocolate mousse! Our second last stop was the ‘Chocolat Chapon’.  We watched some chocolate making, admired the beautifully decorated chocolate eggs and tasted samples of all their chocolates.  Then it was time for chocolate mousse.  We decided to try the dark chocolate, which was about 75% cocoa.  If it weren’t for the kids we would have tried the 90%. 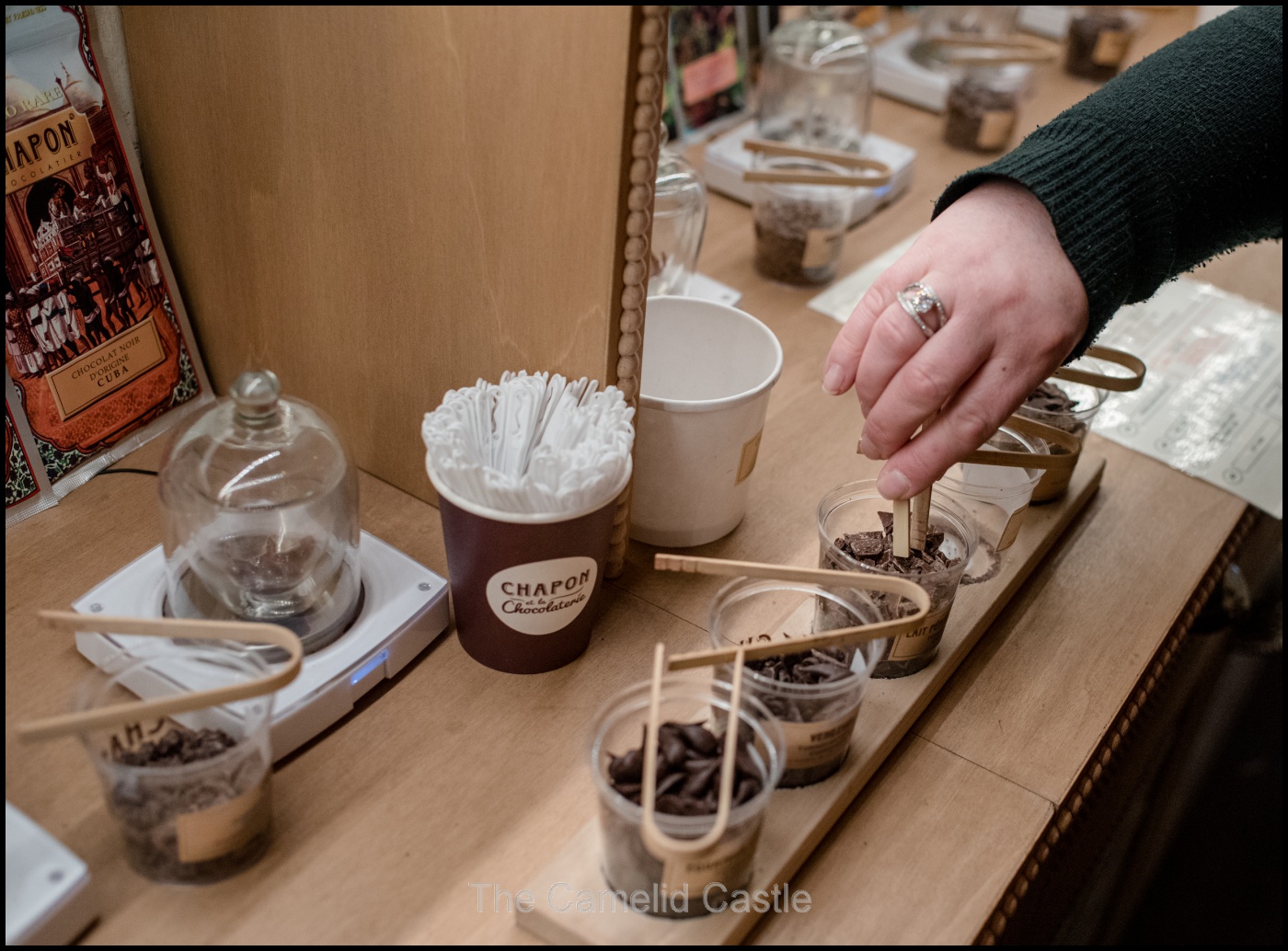 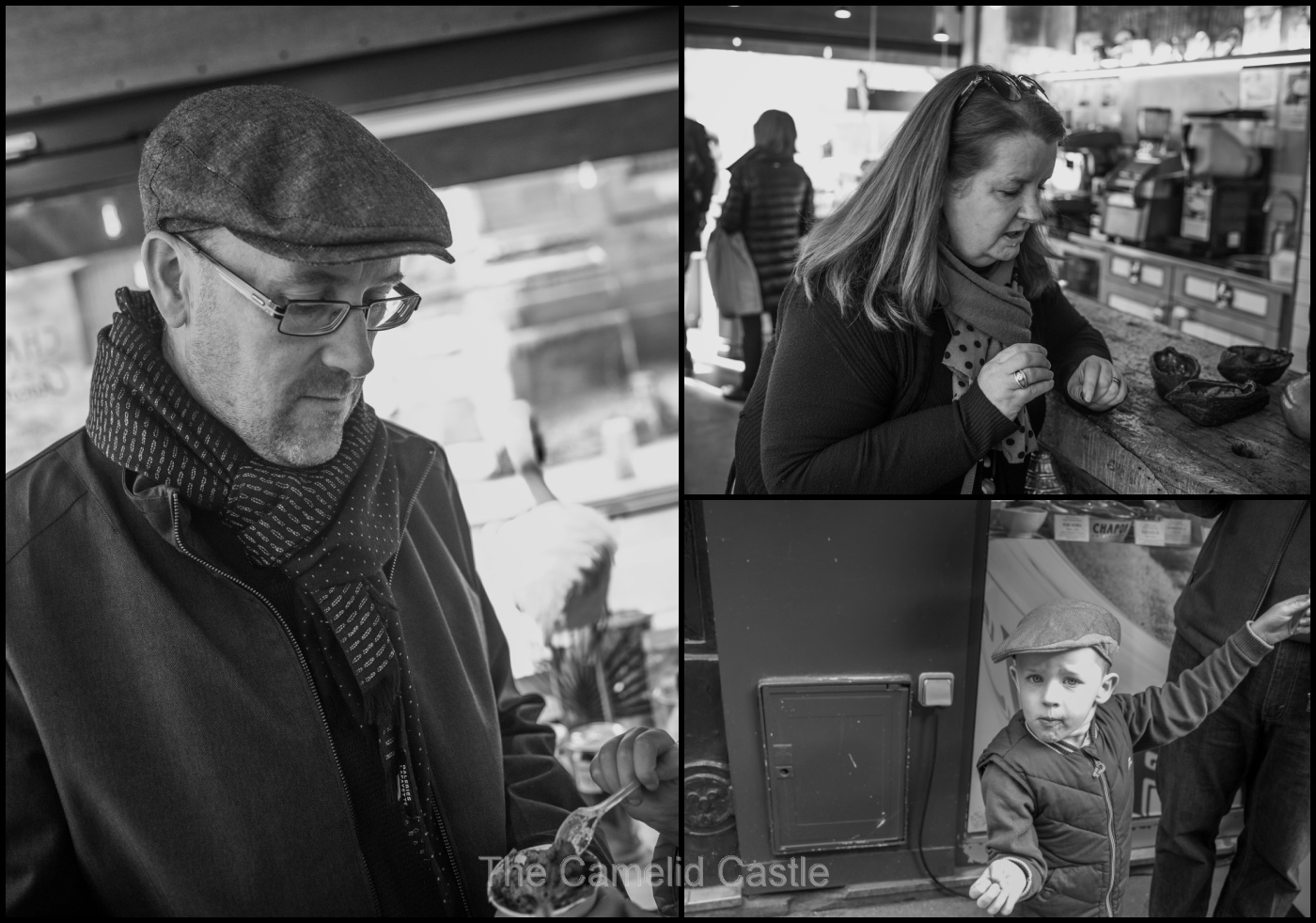 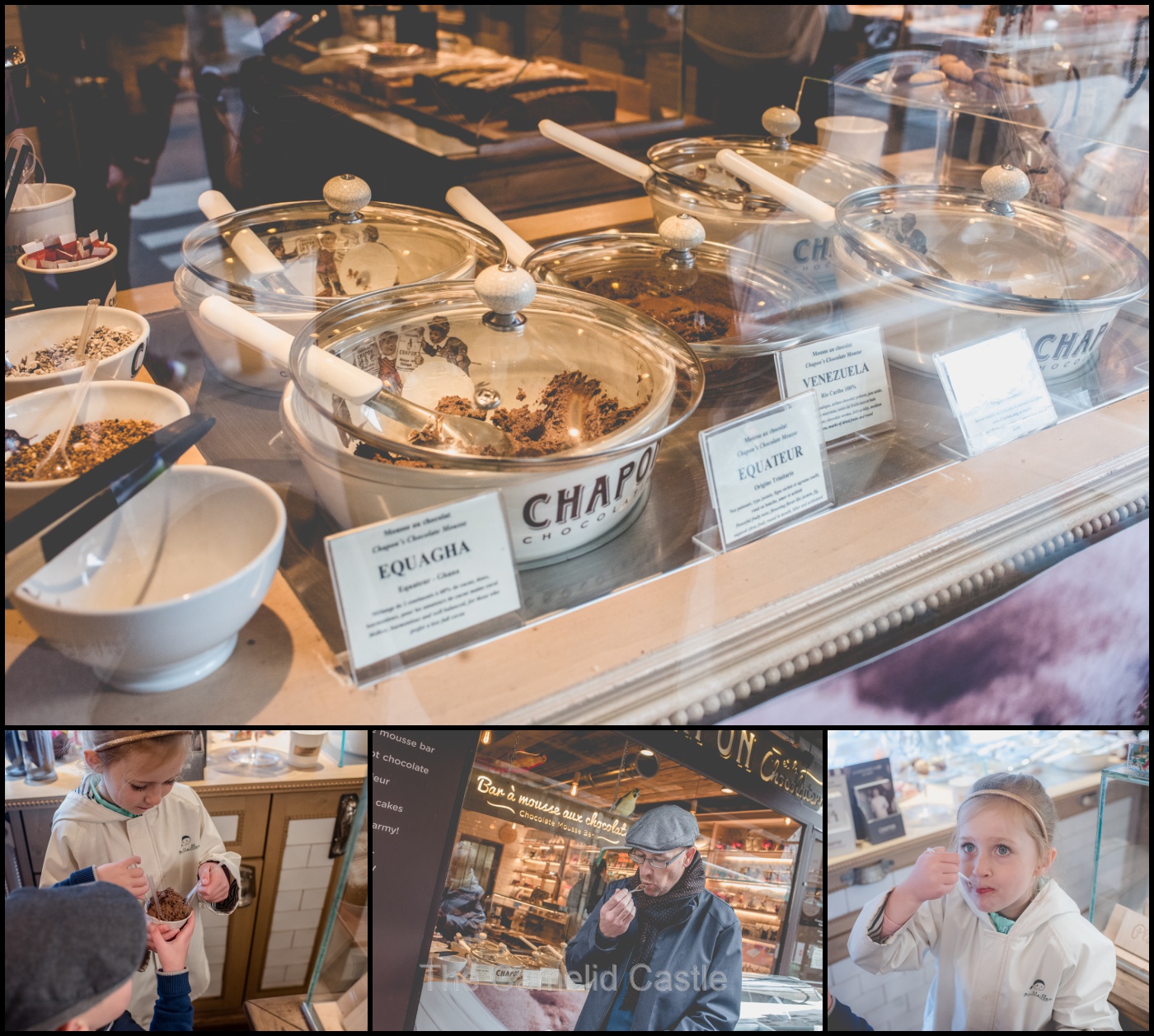 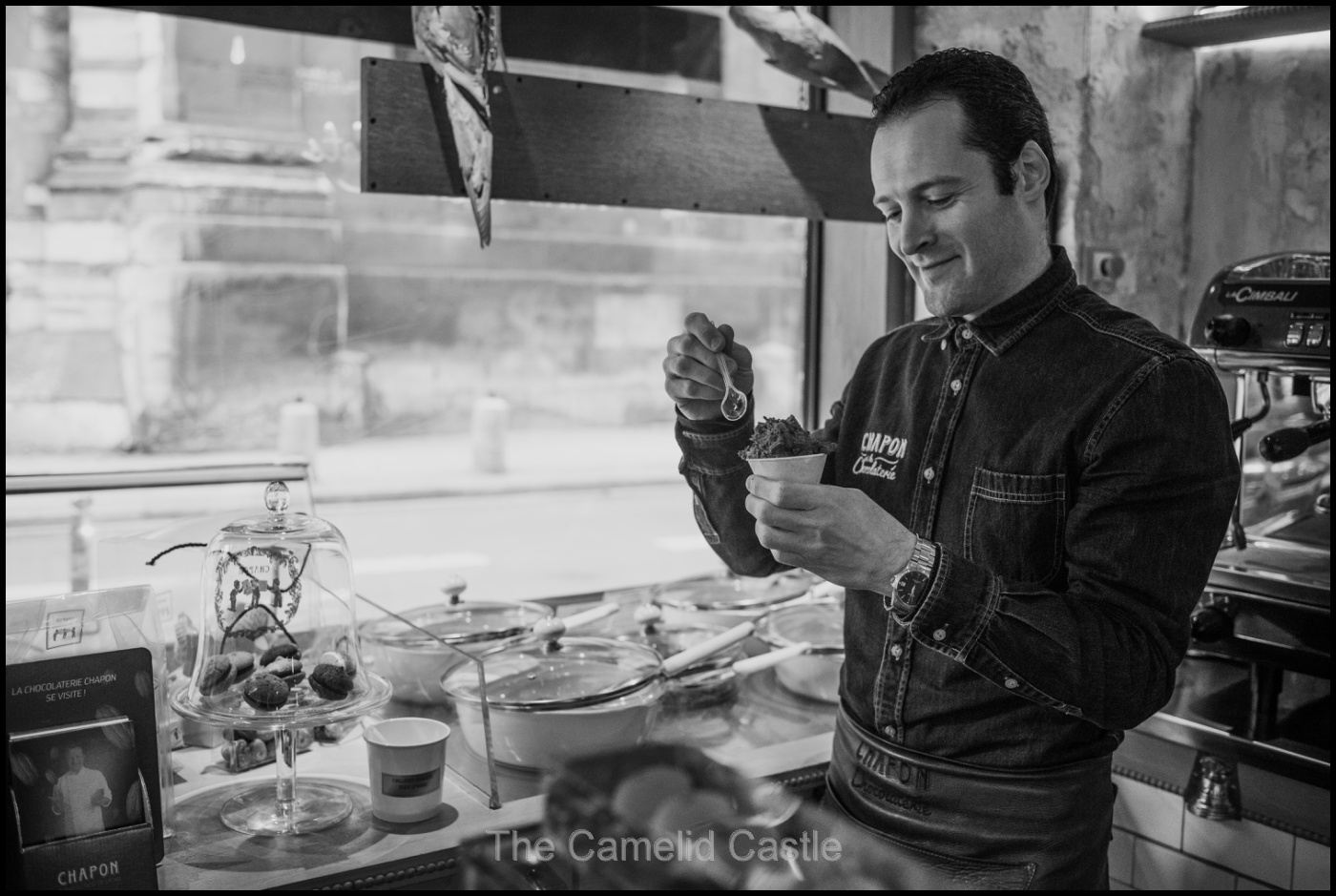 The mousse was fantastic and we all wished we weren’t feeling quite so full of sugar at this stage. Still, it couldn’t be kept for later so we suffered by eating it, the kids ate more than their fair share!

Our last stop for the tour was ‘Choco Factory’.  The kids had been promised a surprise, and they were very excited when they learnt they could design their own chocolate bar.  They got to pick the type of chocolate (both sensibly picked dark) and then 3 different ingredients to mix into the bars.  With the selection made and cards filled out, the chocolate was off to be made and it was time for us to sit down and order some drinks.  The adults had just been commenting that it was time for a sit down somewhere warm and coffee to dilute the chocolate swilling around in our veins!

Soren decided to order a strawberry milkshake, Astrid chose a classic hot chocolate.  Anto and I shared a hot chocolate with 4 spices and a coffee.  Di decided just to stick to coffee.  The milkshakes and hot chocolate were enormous and thick and rich. I quite enjoyed my spiced one as it was far less sweet. 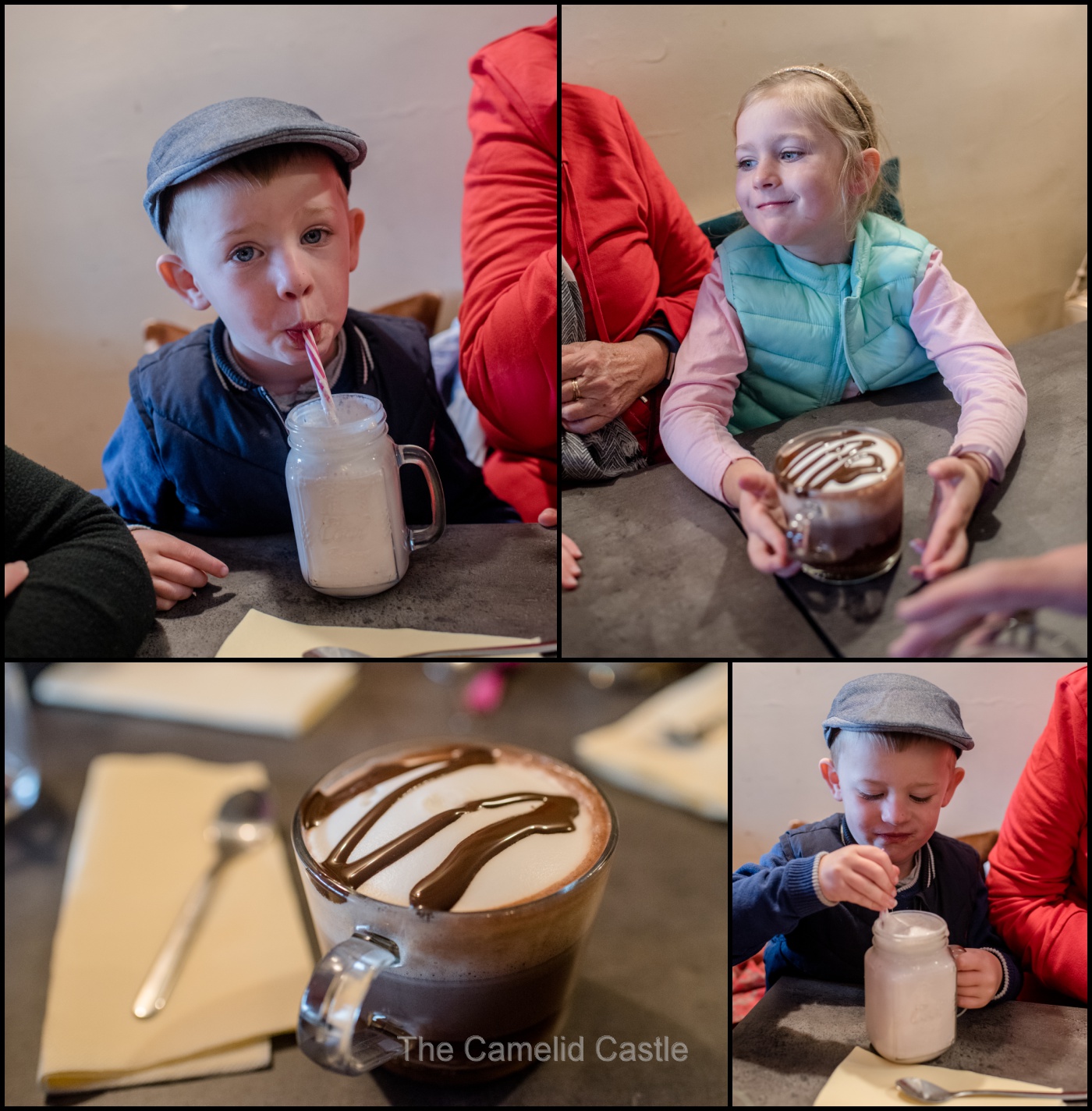 While we were having our drinks we enjoyed our chat with Nathalie and she showed us plenty of pictures of her animals and Paris under snow a few weeks earlier.  Soon the kids chocolate blocks arrived and they were keen to check them out. We did convince them they might want to keep them for another day, we were all a bit too full of chocolate after so many tastings throughout the morning. 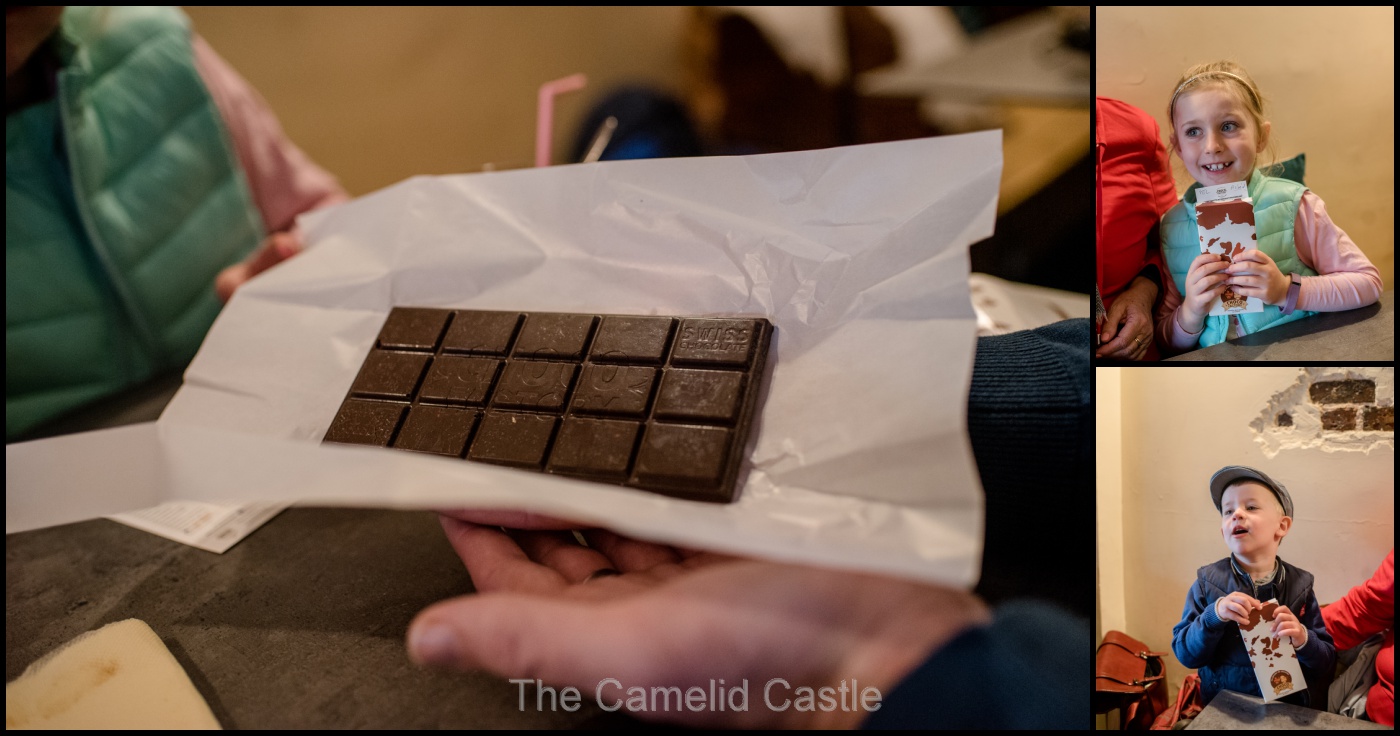 All warmer and full of more chocolate we bid farewell to Nathalie and decided it was time to take the kids for a run in the park.  Conveniently Choco Factory is directly across the road from Jardin du Luxembourg. We had been in the garden the previous day, after visiting the Pantheon, but had hope to return to show Granny.  We noticed that the fence had been turned into a temporary gallery with an array of amazing landscape photos.  I couldn’t resist checking them out, and we were excited by how many placed we’d been were featured, and how many amazing photos were from Iceland, the country we were heading to next. 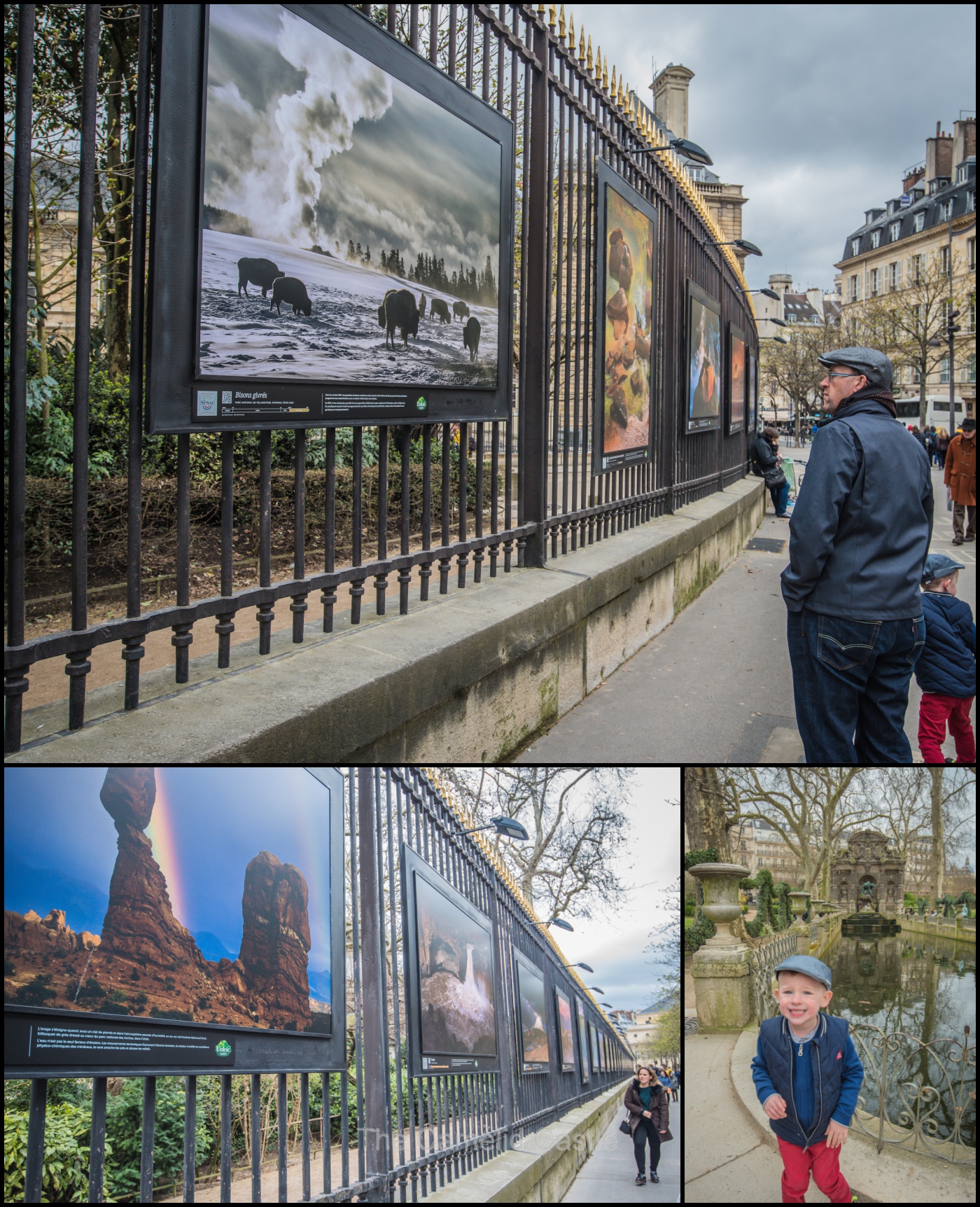 Then it was into the gardens for a wander around. Despite it being cold it was a Saturday so the gardens were quite busy, with plenty of kids sailing boats on the pond and out enjoying pony rides.  Spring had definitely sprung in Paris and it was lovely seeing plenty of flowers around. 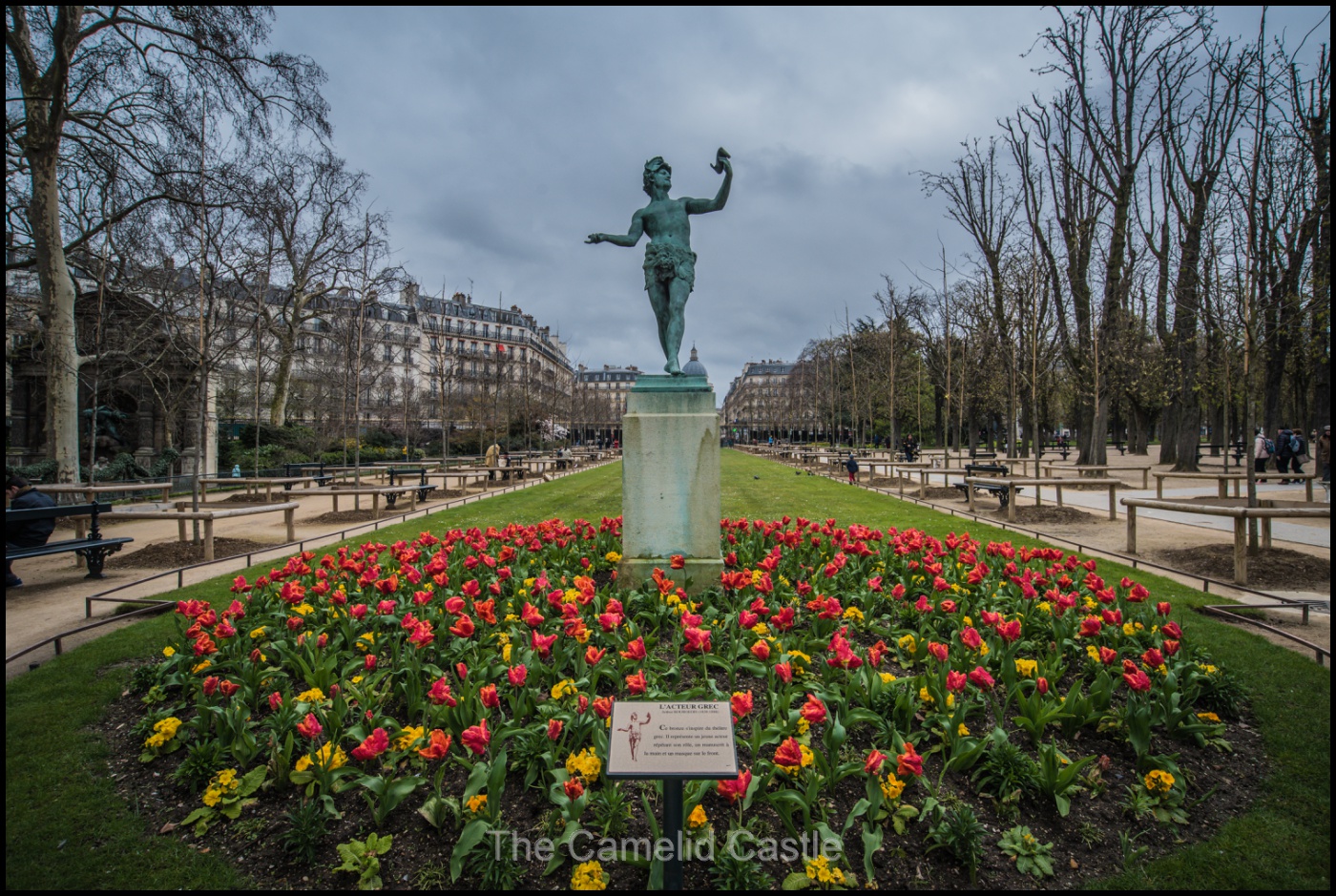 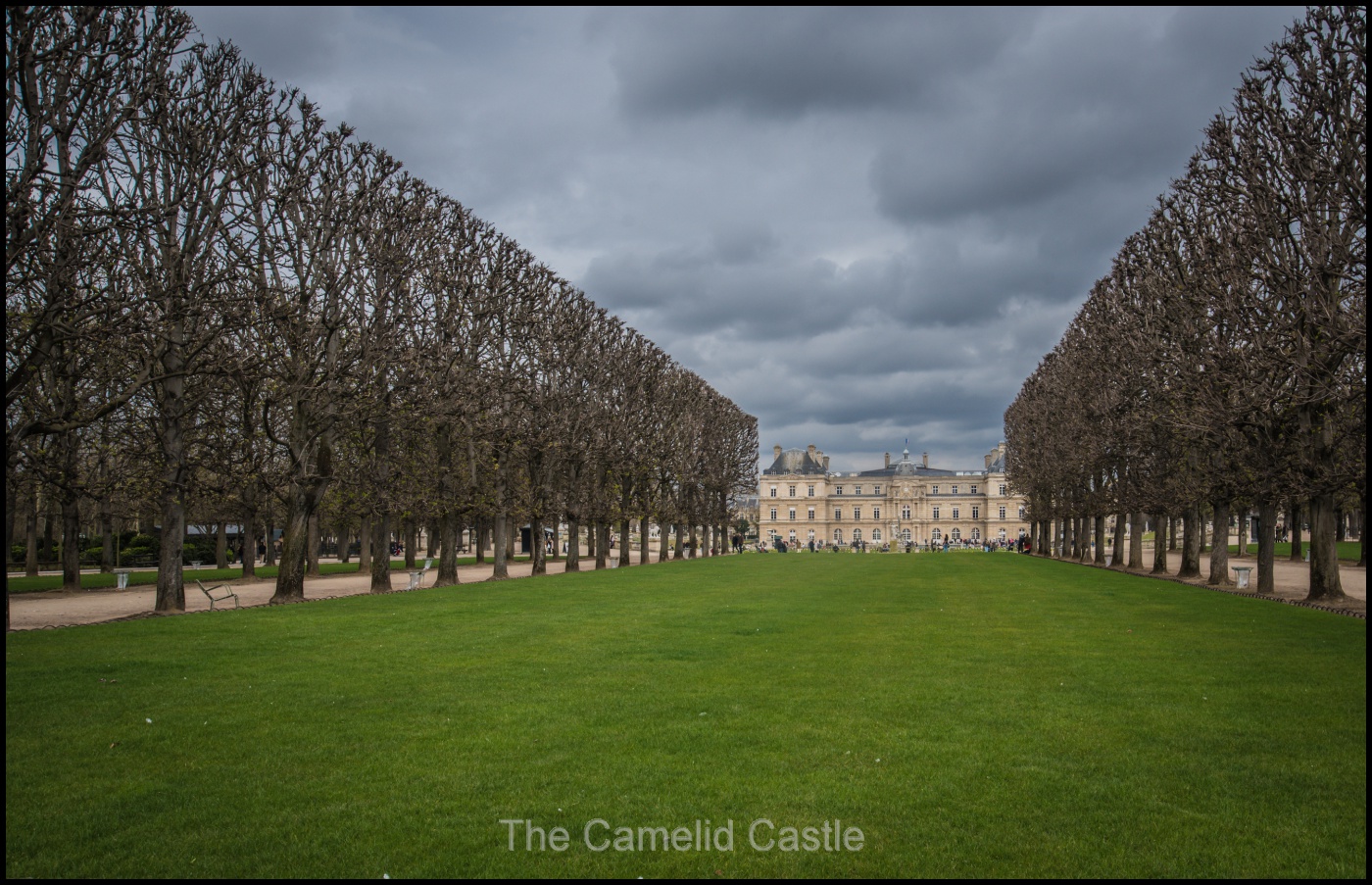 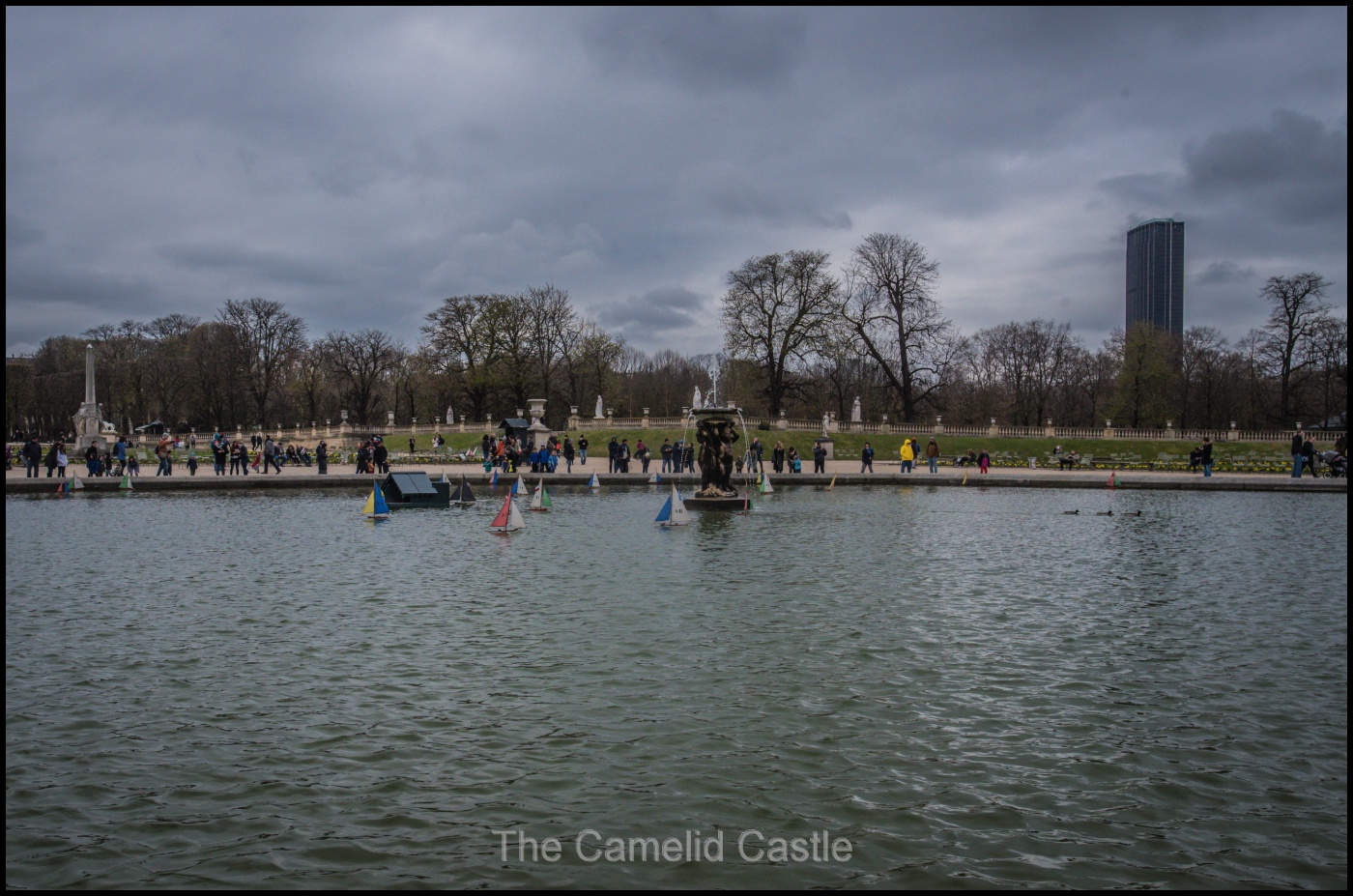 Despite being quite mild temperatures for most of our food tour the wind was now up and it was rather cold so we voted no to playing in the play areas of the park as they are paid entry. While not overly expensive it was a little chilly for the adults to be sitting around for too long.  All feeling cold and weary, we caught the metro back to Les Halles station so we could show Granny the shopping centre and the kids favourite park.

The kids favourite playground in Paris is in the Nelson Mandela Park.  Since our last visit at the end of April last year, the younger kids park, that they have adored for years, had closed and a new one opened. The shopping centre and area above it has been under construction since before our first visit in 2012. Every time we come back something is different. The kids were a little sad their old park was gone but the new one was much bigger so they were keen to check it out. 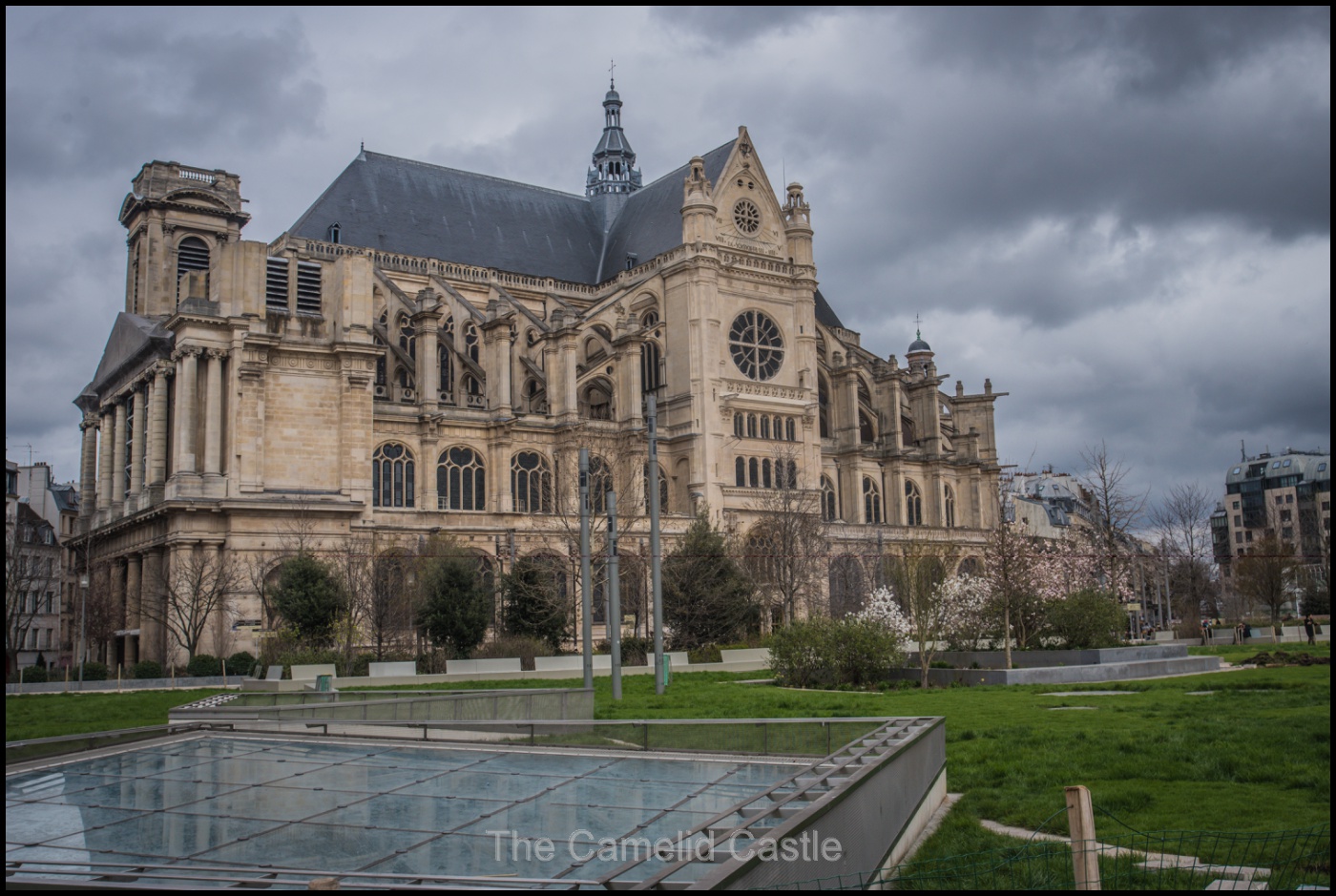 After dragging the kids away from the park, we Off for quick look at Anto’s favourite kitchen shop – E.Dehillerin.  We have managed to score some amazing things from that shop over the years, and have been slowly adding to our copper pot collection.  Deciding that we’d return one day soon to shop without the kids, while Granny took them to the park, it was off to hunt and gather some dinner supplies as it was now getting late in the afternoon.

We took Granny down Rue Montorgueil to show here where all our favourite pastry shops are located and pick up some dinner supplies.  Purchased for tonight’s menu was rotisserie chook, roast potatoes, wine and fresh baguette.  As much as we love our nightly patisserie treat, even the thought of it was too much tonight after all the food!

After a big day out in the cold, the over-tired kids rampaged in the apartment for a bit before Anto cooked dinner, of the chicken (with a zuchini puff for me), roast potatoes, salad and garlic green beans and baguette. Dessert was left over pastry tour items now that we could almost face something sweet again!

We managed to get the tired kids to bed at a reasonable hour before Granny succumbed to the jet lag and fell asleep on the loungeroom floor before we could convince her to make her bed up……….. 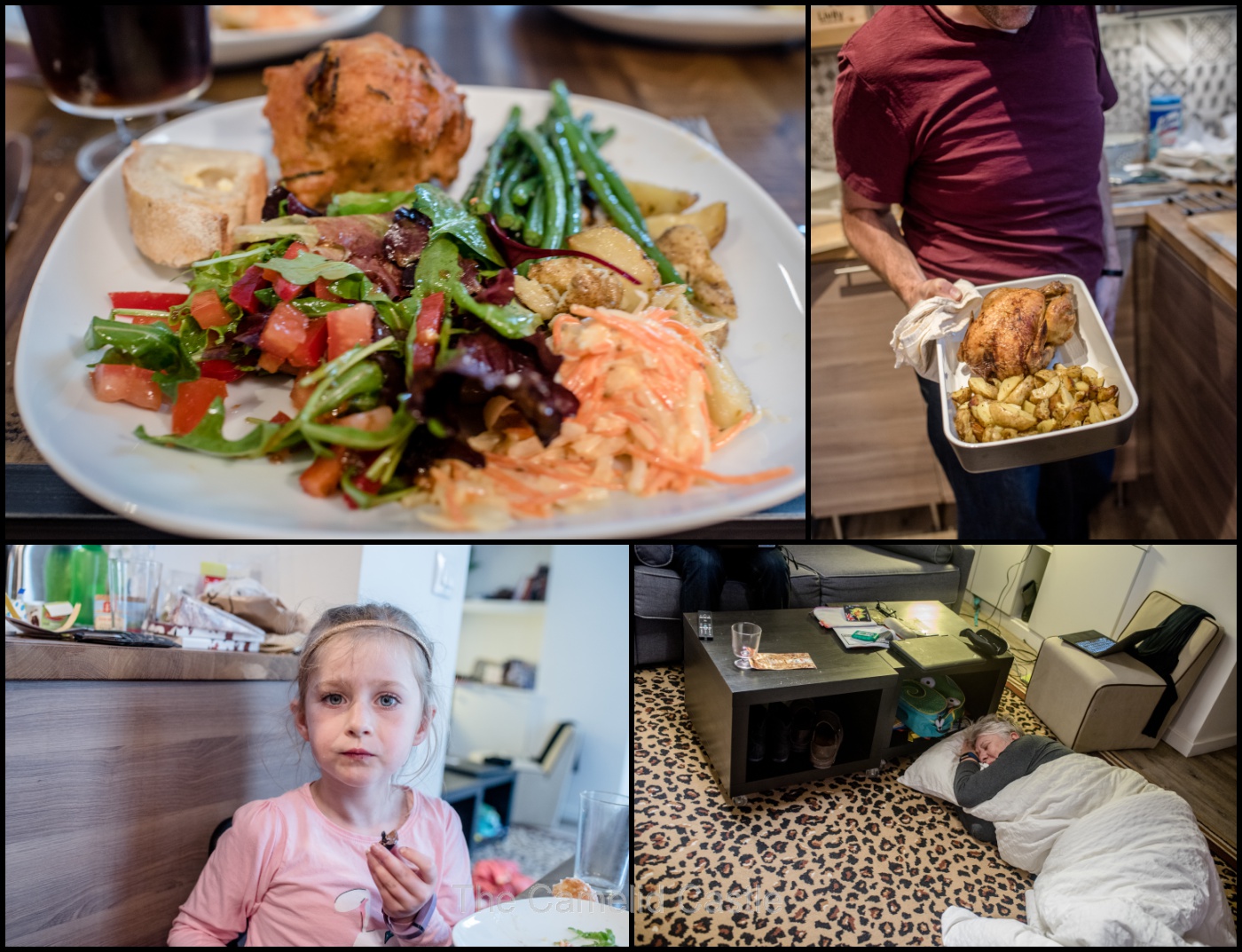 Up next, Easter Sunday in Paris with an Easter egg hunt for the kids, and a night out at the ballet at the beautiful Palais Garnier for Anto and Nic!