We had a 6.15am alarm rudely awaken us so we could make our flight to Sweden on time. We have been a bit spoilt with all the train trips, and our ability to get to the station 10 minutes before our train leaves. Back to flying meant having to be at the airport 90 minutes prior to the flight. Charles De Gaulle airport is a 40 minute metro from Gare du Nord, which is a 6 minute metro (and 10 minute walk) from our apartment. Sadly, a 9.35am flight meant leaving the apartment at 7am.

We had a very efficient metro run through to Gare Du Nord, and quickly found our RER through to CDG airport. Towards the end of the metro ride Astrid decided she was getting a bit grumpy as she hadn’t had breaky, but nothing a bikkie wouldn’t fix. We assumed we had made the airport with stack of time. However, by the time we found our terminal and gate it had wasted a lot of time. We then had issues getting checked in and we eventually managed it automatically, fearing that if someone had to look at our passports we wouldn’t be getting on our flight. Luckily the quick glance at our passports didn’t hinder us (even though the photos on them are so damaged they no longer look like us) and we made it to security with a fair bit of time. Having a baby with us again got us waved through security quickly, until we had to take all our coats, hats, shoes and everything else off to be scanned. Rather inconvenient, and a little bizarre given they didn’t check liquids or anything else, but wouldn’t let us wear our shoes!

Finally, after a couple of hours of promising Astrid breakfast, we sat down to some airport coffees and pastries. Despite being ‘from the airport’ they were still delicious and 2 coffees and 3 pastries were only 11 Euro. Sydney airport and it’s $6 inedible muffins have a lot to answer for. We boarded our flight on time and we were right down the back. The plane didn’t look packed and we were hoping with a 2.5 hour flight to have a spare seat near us to spread out. With all the travel we have been doing it didn’t seem like *too* long of a flight but it’s still long enough! Sadly, there was another gentleman in our row but the Air France hostesses quickly shuffled people around and found us a whole row to ourselves. Great service there!

The flight was fairly uneventful. It was very foggy when we left Paris but once above the cloud line we actually saw sun, which was a pleasant change from grey Europe. We were served some very acceptable sandwiches, which Astrid managed to demolish, despite having just had breakfast. She entertained herself with more episodes of playschool and the flight went by quick enough. We landed in Stockholm at 12.15pm and it was about 8 degrees and partly sunny. Very different from the 2 degrees and foggy in Paris. Not the weather we had been expecting in Sweden.

Arlanda airport in Stockholm is a fair hike from the city and the train to central is very expensive but the bus was more reasonably priced, so the bus it was. We didn’t have to wait long and we boarded our nice and very well heated coach. Astrid was getting a bit feral but after only a couple of minutes of whinging she managed to fall asleep on my lap. It was only half an hour into Stockholm central and we didn’t really want to wake her and we somehow managed to get her into the ergo still asleep (although minus her coat, which was less ideal). She slept through us obtaining the local currency (you would really think all these European countries would happily move to the delightfully stable Euro, but apparently not) and finding a baggage locker for our bag. Stockholm central could do with more baggage lockers as we had to ‘locker stalk’ to get one. 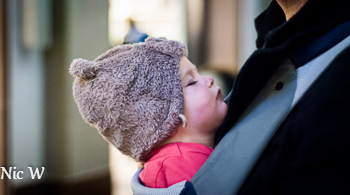 We set off for a wander to get some lunch before our train later that afternoon. We only managed a short walk through the shopping area near the train station but we have more time in Stockholm on Monday for greater exploring. Our barely passable German and dodgy French is nothing on our total inability to comprehend Swedish. This made lunch menu reading difficult but we eventually found a cafe that looked quite acceptable and were excited to find they had some English on their menus, once inside. Even with the currency conversion, Sweden seems relatively expensive for food. Probably not as bad as Switzerland though!

We had some lovely toasted sandwiches (chicken for Anto/Astrid and goats cheese for Nic) and finished off with some warm spiced apple cake and cream. Astrid was particularly impressed with the cake and wanted ‘more, more, more’. When we told her it was gone, she pointed at the cakes in the display and showed us there was in fact ‘more’ available. Too clever, that one! 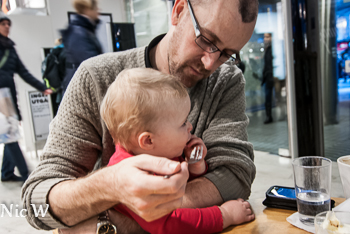 We had a short wander back to the train station, noting that there was an abundance of stone lions everywhere, apparently they line the ‘Queens street’ with lion’s being the symbol of Swedish royalty (since the 15th century or so – apparently a lion was considered a pretty good symbol even if no-one in Sweden had much idea what they actually looked like. 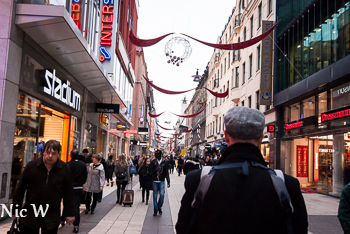 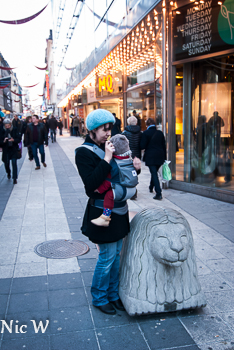 It was already sarting to head towards dusk, at 3pm. It did make for nice light, but was a little disconcerting. We found the train station and our baggage without drama and probably located the most expensive toilet on our travels yet, at 10Kr. Lucky it had a good baby change or I wouldn’t have been happy. For whatever reason I had thought our train to Karlstad that afternoon was about an hour. I was then informed by Anto it was actually 3 hours…… not what I wanted to hear. Once we got to the platform the train arrived on time and there were people everywhere. We didn’t have reserved seats and weren’t sure what carriage to try. We were helpfully informed by one of the train staff that we just had to wait and see if seats were available. I decided 3 hours of standing with a baby was not a good option so we plonked ourselves in some seats and hoped not to get kicked out. Luckily this worked at least for the first leg of the trip, and despite the train being packed no one turfed us out.

Now the reason we decided to go to Sweden, and this particular area of Sweden at that, was to visit Anto’s friend Bjorn. Sadly, getting to Bjorn’s house involved some less than ideal train travel. The Swedish trains don’t seem quite as fast and efficient as many of the other trains we have been on in our European travels. We settled Astrid into the long train trip with some more playschool and a drink and we soon discovered that Bjorn was actually on our train as he had gotten an early mark from his work in Stockholm, and was heading back with us. It made the very long train trip more fun having someone to talk to.  The lack of seats did mean that there was a lot of standing in the aisles for either Bjorn and/or Anto and we got moved a couple of times but at least Anto and Bjorn could catch up as we headed to Karlstad. 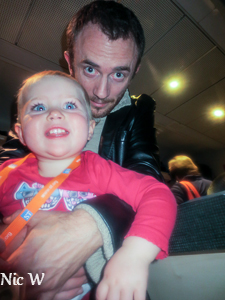 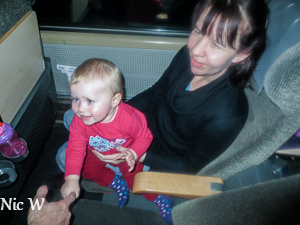 We noticed as we boarded the train at 3.30pm the sun was setting. We got to see a lovely sunset as we headed out of Stockholm and it was dark by 4pm. It was extremely off-putting and made it seem much later than it really was. A tired Astrid was also a bit confused by it all but was being generally well-behaved for at least the first 2 hours of the trip. She decied she LOVES Bjorn and refers to him as ‘man’ and wanted to be cuddled by him for most of the trip. She was quite pleased to be told she was going to ‘Bjorn man’s house’. The last hour of the trip Astrid got rather tired but was not going to have a sleep on me not matter what. Luckily the train was crowded and noisy and there were other noisy kids around so she didn’t cause too many dramas.

At 6.30pm we reached Karlstad and quickly located Bjorn’s car, equipped with baby seat, that his kids have grown out of. In Sweden the seats are much better than Australia and Astrid still easily fits into rear-facing so she was travelling in style. She had a little sleep on the half hour drive to Edane, where we had dinner in the Pizzeria which was built in an old train station. Here we met Bjorn’s family; Linnea and his kids Sebastian and Nelly for dinner. Astrid was not impressed with being woken upon our arrival and screamed incessantly. We had finally after 6 weeks reached the limit of Astrid. The last few long days have just been too much and she was not a happy camper. Some panadol and some milk didn’t even help and she fell asleep sobbing in our laps and didn’t participate in the pizza, and Swedish meaty dinner.

The trip back to Bjorn’s place involved more Astrid unhappiness but she perked up when she met their Finnish dog Dumle, who is huge, fluffy and very cute.  She was unsure whether to be excited by him or scared and alternated between both.  The new place was exciting but it was late so we decided she had to go to bed.  All good in theory but she was sleeping in with us and found the glow in the dark stars on the bed which were a source of constant amusement.  Luckily she finally fell asleep at about 10pm, but it had been a long, long day!