Unfortunately Astrid now has the nasty cold of death and had a bad night.  The poor little munchkin looks so unhappy and has snot pouring out of her as well as watery eyes. Luckily she is still in good spirits and enjoying her outings, even if she does look miserable.

The weather forecast was for a sunny day and low 20’s so we thought we should make the most of it and do some sightseeing.  We headed out early and planned to walk down to the Champs-Élysées. We decided to take the scenic route along the river.

The last time we walked along her it was pre-sunrise, so things looked a little different today.  We noticed some of the funky street art opposite the Louvre: 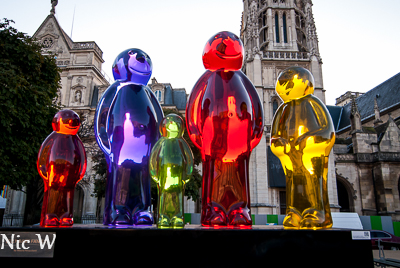 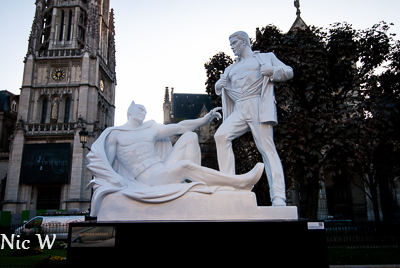 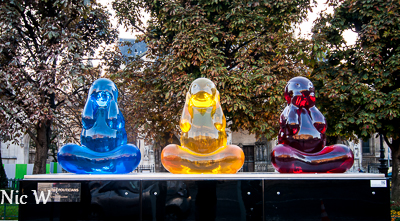 The Seine was also looking pretty impressive yet again: 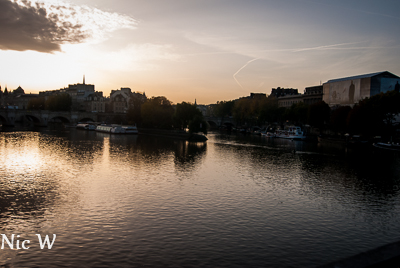 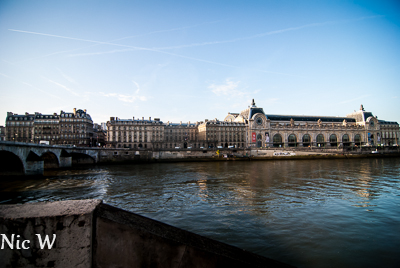 We finally made it to the start of the Champs-Élysées and slowly wandered down.  We didn’t go into the shops but enjoyed seeing the grandeur of it all. We did note that the Cartier store doesn’t bother opening before 10.30am! 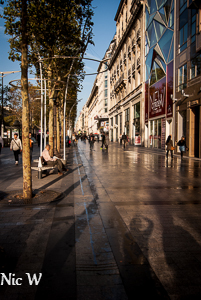 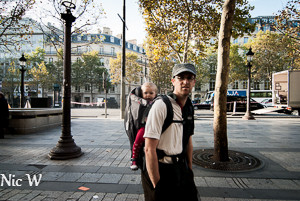 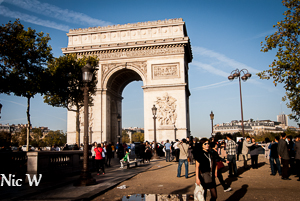 It was quite warm out and we were getting a bit sweaty carrying an Astrid.  Regardless of the temperature French people seem to wander around in boots, coats, and scarves. Very odd, given that at these temps at home we would have on shorts and a T-shirt.  In need of a break we headed to Laduree for morning tea.  That place is seriously impressive.  Instead of our morning coffee we elected to have a hot chocolate. I’m not sure what Anto ordered us but it turns out it wasn’t hot chocolate but a delicious cold chocolate drink that was probably about 90% cream. Astrid was also a huge fan! We also loved the silver jugs they came and poured it out of. 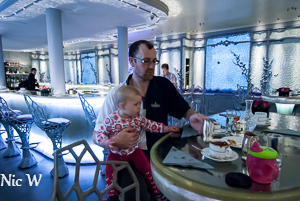 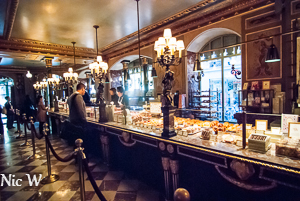 We admired the selection of scrumptious looking cakes and decided on a selection of macarons to take home with us for dessert.  They aren’t cheap but by golly they looked good.  We decided it was time to escape before Astrid trashed the joint, and walked back up to the Arc de Triomphe.

Being such a nice day there were quite a lot of tourists milling around, but it still didn’t take us long to make our way underneath the road to the Arc and buy our tickets to go up. As we had Astrid in the carrier we were allowed to use the lift up to the main area, meaning there weren’t too many steps. The lift had a glass roof and it was quite an interesting ride up.  Once out on top of the Arc, we had a fantastic view of Paris. It is interesting seeing all the avenues radiating from the Arc.  Astrid also enjoyed running around and waving bye-bye to all the tourists. 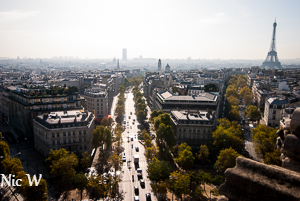 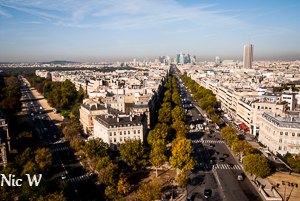 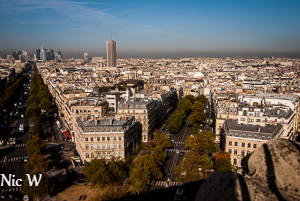 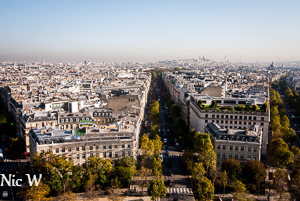 We headed back down the spiral stairs, not good for my vertigo but an interesting walk. We walked around under the Arc and got some good snaps and looked at the tomb of the unknown soldier. The detail in the Arc is quite impressive and photos don’t do it justice. 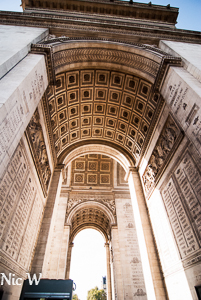 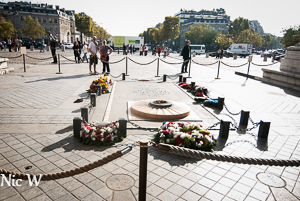 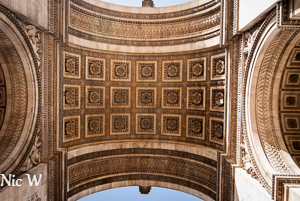 It was getting late so we caught the metro back to our apartment for some lunch of fresh baguette and let the sick munchkin have a sleep. She was in a good mood still considering how sick she was.

After her nap we headed to Jardin Des Halles for a play. It is much more pleasant there when it’s 20 odd degrees and not raining! Astrid enjoyed her play. Every time we are at a playground we note that French mothers (and nannies) don’t pay much attention to their kids. Kids are constantly falling over, hurting themselves, screaming and generally getting up to mischief and being ignored by their carers.  They look at us like we are weird for supervising her on the equipment and not allowing her to go face first down the slide.

Back to the apartment for some packing for Switzerland and some dessert of Laduree macaron…….. yes they were delicious. We think the Salted Caramel was our favourite with honourable mentions to the vanilla and citron.