After another bad nights sleep with a sick bubba, we were up very very pre-dawn in order to catch our train to Switzerland. We resembled pack animals, as we tried to get enough gear for 2 big people and a messy small person for 5 days, and said small person, to the metro station. At this point we vowed that for the next trip we would just wear the same clothes every day so we could take less stuff.

We made it through 2 short metro trips to Gare de Lyon and found our TGV train to Geneva, we even managed to arrive in plenty of time for the 7am train. The train was big and roomy and we were in first class (courtesy of the Eurail pass) and with mostly empty cabin we got moved to a bay of 4 large seats so we could stretch out. Astrid was the only child in our section of the train and everyone knew about it. She still wasn’t feeling well and was very tired from being sick and woken early. It ended up being a painful 3.5 hour trip. The train was lovely, roomy and comfortable but Astrid was having meltdowns and wouldn’t sleep. The breakfast we got served distracted her for a bit. She ate her fill of croissants and figured out they are pretty good with butter and jam, but the rest of the trip she was inconsolable. Hanging on the train (Astrid style) before she got grumpy: 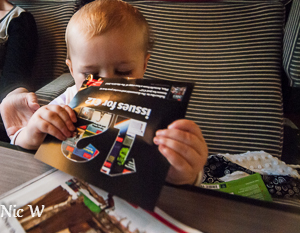 Aside from the tantruming toddler the journey was pleasant. The scenery was lovely. Once the sun finally came up (close to 9am) we got to see some French countryside with rolling green hills and lovely farm houses and some spectuacular cliff faces and roads built high into air running through the hills.

We arrived in Geneva about 10.30am and lugged the considerable amount of luggage to be stored for the day at the train station. Once we had reduced the load down to a day pack and an Astrid in the carrier we set off the see the sights of Geneva. Unfortunately it was very foggy and very grey. It was also quite cool. Unlike Paris which seems mostly humid and not that cold, Geneva was at 14 degrees quite damp and cool and you did need a jacket.

We headed down to Lake Geneva and did a bit of a walk around. It would have been spectacular if you could see very far. We did find the famous water jet and several fountains that were worth a look. The much hyped flower clock was currently being replanted, so there wasn’t much to see there. We had to laugh at how pathetic it was though! 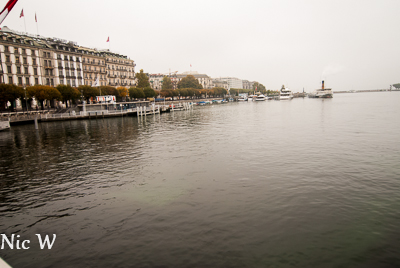 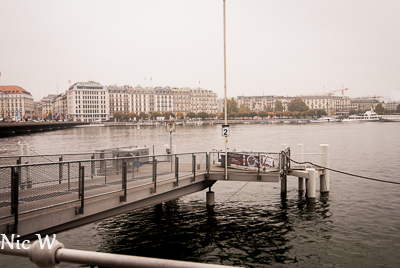 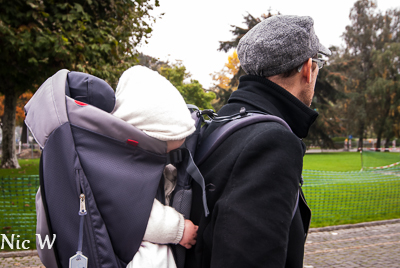 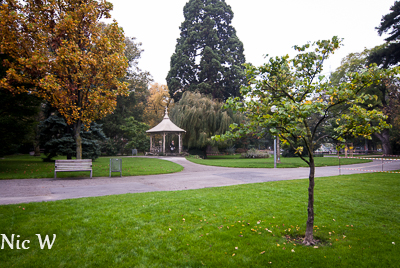 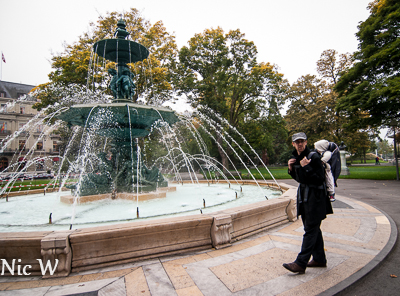 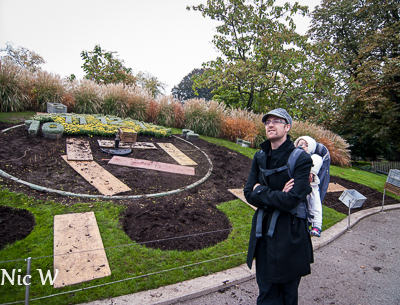 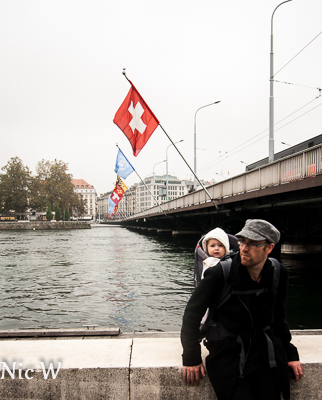 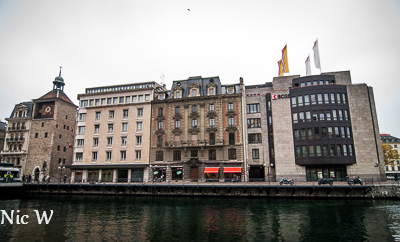 We noted that there are indeed A LOT of banks!! The buildings and feel of the city is very different to Paris. It is much more structured, more a mix of modern buildings and old together (but always the same height) which gives an interesting feel. It is also very quiet compared to the noise and bustle of Paris. People are also much more polite.

We have obviously been in Paris long enough now that the Swiss French sounds different enough from Paris French for us to notice. We are still terrible at French no matter the country though……

We had a wander through the main shopping district and yes there are a lot of watch shops. If we had more time (haha) we could have gone watch shopping. Actually time wasn’t the issue, so much as money. You could spend a fortune.

We sought out a cafe for lunch and ended up finding something decent. I got a goats cheese salad, Anto an omelette and salad and we ordered Astrid a croque monsieur. The waitress did think it was weird we ordered food for a baby and thought it was hilarious that she ate the whole thing. While Our lunch was nice, it was pretty much $50 AUD and that was the cheapest place we could find. You couldn’t get a coffee for under about $6 AUD. We have found it possible to eat fairly cheaply in Paris, but Switzerland might literally break the bank.

Post lunch we thought we would wander back to the lake and see if there was more to see. The fog had lifted a little and we managed to see a little more but we decided against doing a lake cruise as it just wasn’t nice enough and we wouldn’t see much. Instead we wandered through the shops some more. We decided to visit one of the many ice-creameries. Astrid liked the icecream until she saw croissants on offer and then had a tanty about not getting a croissant! 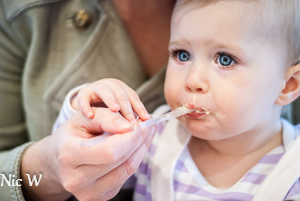 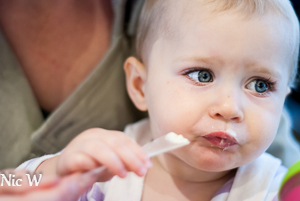 We wandered the lake foreshore and boardwalk area and looked at the boats and very large swans. Astrid got good view of the swans as some had come out of the water to eat bread being fed to them by other tourists. Such graceful creatures look rather big and goofy on land. We also found a watch museum which was interesting, as well as about a bizillion waterside cafes that looked glorious but were hideously expensive. 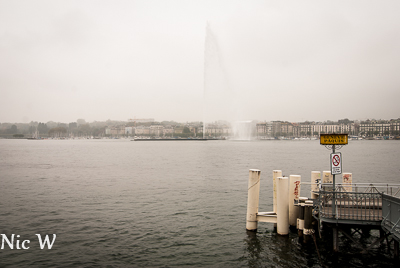 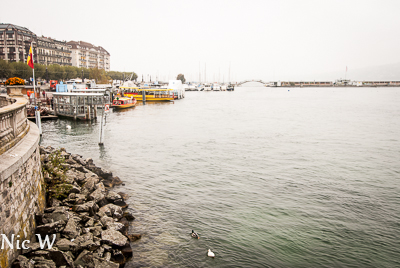 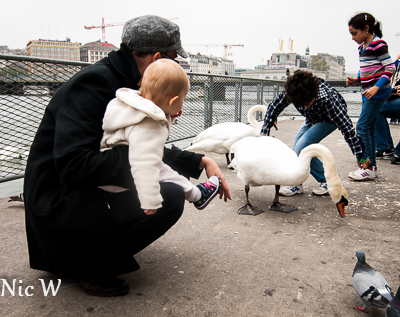 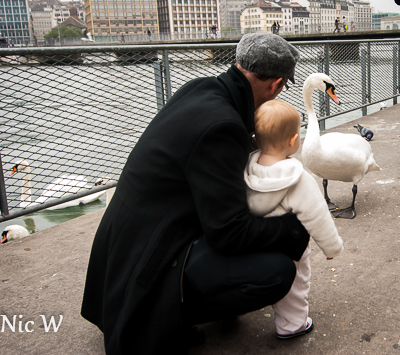 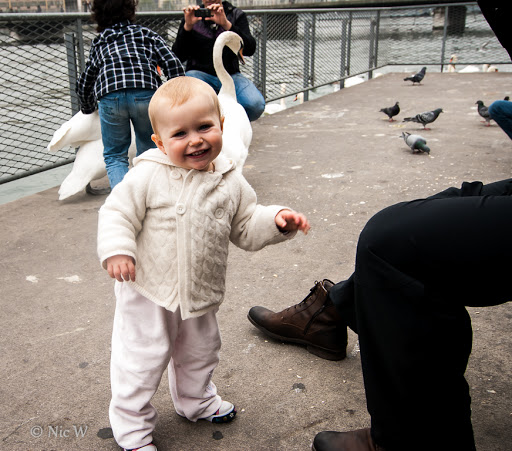 We found a supermarket/department store that was pretty impressive. The Swiss seem to do big supermarkets which is a nice change from the tiny corner stores in Paris. We did laugh at the enormous chocolate section in the supermarket. They have SO many brands of chocolate and even different flavours of Swiss brands you can get at home like Toblerone and Lindt. We did buy some to try and we are considering using an entire bag allowance on chocolate purchases. The chocolate is pretty well priced, so we might have to live on chocolate for the next few days.
The chocolate selection (and this photo doesn’t get in all of it!): 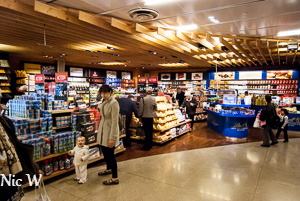 After a bit more wandering Astrid was getting pretty grumpy. She had a 30 min snooze in the carrier but no proper sleep all day so we elected to catch an earlier train to our next destination, Montreux. This was one of their regional commuter trains and it was still extremely, large, comfy, modern and clean. So far we are really impressed with the Swiss rail system. Astrid was again not a happy camper, her molars are cutting, she is sick and she was really tired. I think the whole carriage knew we were on board. We distracted her periodically with scenery and games but the hour-ish long trip felt longer. 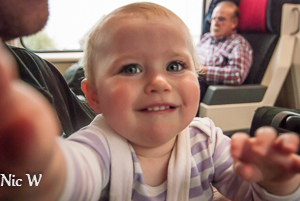 The scenery was very Swiss as we worked our way around the edge of Lake Geneva from Geneva to Montreux, through Lausanne and some smaller towns like Vevey. Lots of Chalet style houses, heaps of vineyards (mostly terraced on steep hills) and lots of little towns butting up to the lake edge. Lake Geneva is huge – 341m deep and 17km wide by 72km long.

We got to Montreux and were impressed by how beautiful it is. Our hotel is also a winner. It is old and quaint (the lifts are scary, no walls and you can open the doors wherever you like) but the rooms are spacious and it feels quite Swiss. More on Montreux in the next blog but we had a little walk around and found some yummy Thai for dinner and got Astrid to sleep, ready for a big day of trains and town hopping tomorrow.