Montreux
Our night in Montreux went well. After a long day Astrid had a decent sleep despite being in a new place. We were up fairly early to make the most of our sight seeing time in Montreux. Aside from dinner the previous night we hadn’t seen much of it.  Our hotel included breakfast. Swiss style breakfast is Astrid’s dream: croissants, tasty bread with butter and jam, cheese, cold meat and swiss yoghurt. All the things she loves!  She also had the staff doting on her and fetching her highchairs and milk.
Astrid at the hotel with mum and dad: 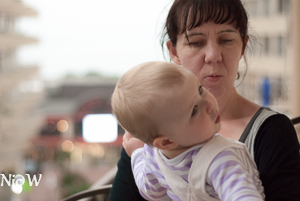 After breakfast we decided to walk around the town before catching the bus to Chillon Castle.  The buses and trains around the Riveria region are all free but Anto thought that instead of catching the bus up the really steep hills we should walk.  We figured we could work off some of our breakfast, so took off up the hills through the cute little houses and along cobblestone paths. The views were lovely on the way up. It was still quite foggy so you couldn’t see much of the lake but it was quite picturesque.  We wound our way up and got a good leg workout, but also some nice photos.  There seemed to be a lot of terraced gardens and huge drains for all the mountain rain and storm water.
The streets and views of Montreux: 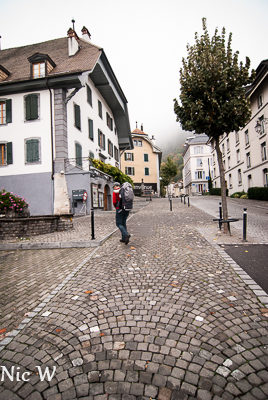 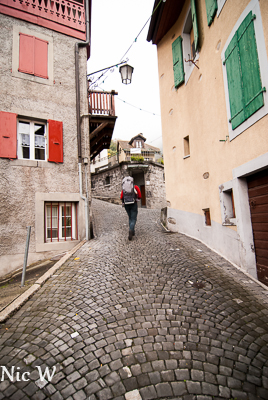 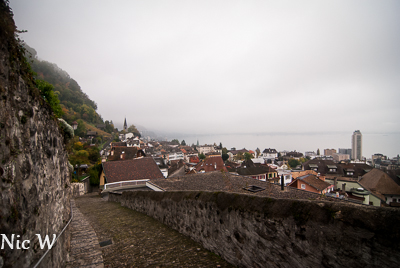 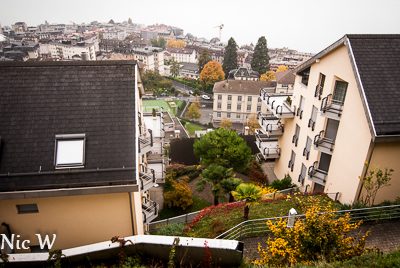 We headed back down to our hotel and caught the bus to Chillon castle.
The Château de Chillon (Chillon Castle) is located on the shore of Lake Geneva in the commune of Veytaux, at the eastern end of the lake, 3 km from Montreux, Switzerland. The castle consists of 100 independent buildings that were gradually connected to become the building as it stands now.
The oldest parts of the castle have not been definitively dated, but the first written record of the castle is in 1160 or 1005.[1] From the mid 12th century, the castle was home to the Counts of Savoy, and it was greatly expanded in the 13th century by Pietro II.

We didn’t have a lot of time so we did a bit of express tour wandering through. Astrid was napping in the carrier after sleeping most of the way through our morning walk and the bus trip down to the castle.  It was a little tricky negotiating some of the tight doorways and steep stone steps with an Astrid on your back but Anto managed well. The castle was really interesting. Lots of different rooms and it had been restored well.  It would have been an impressive place to live, right on the edge of the lake, except if you were one of the prisoners they kept in the dungeons. 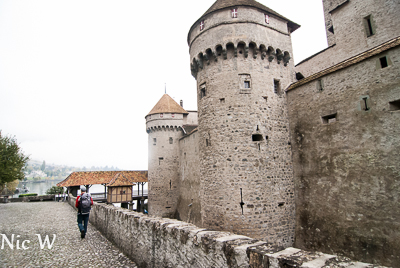 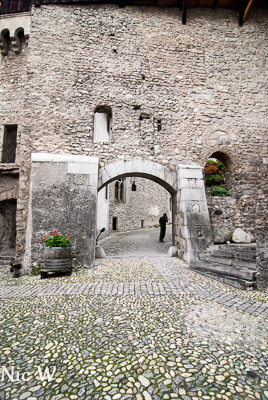 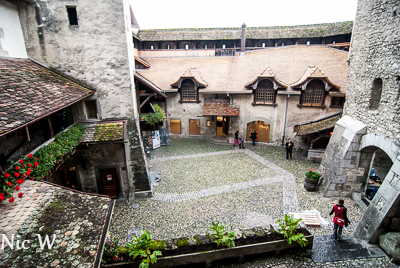 We could have spent hours looking around but headed back to the hotel to collect our bags and grab a quick coffee before heading to the train station. We noticed that coffee is hideously expensive in Switzerland, to the point where beer and wine are both cheaper. Apparently if you are on a budget you need to just drink wine and eat chocolate!

The Golden Pass Line to Interlaken
We caught the bus to the train station, as although it was less than 1km, we had a lot of bags and it was free and easier than dragging the bags up the hill. We located our train and were pleased to find that the trains for the golden pass line were again clean, roomy and modern. We had big windows for viewing the scenery and plenty of room. The first leg was Montreux to Zweisimmen, through a number of small towns up through the mountains.  It was quite foggy so we were hoping to get to see something through the fog, given the whole point of the train ride was for the scenery. Other than a few sections the fog wasn’t too heavy and the scenery was pretty impressive. Lots of extremely steep valleys, dotted with farms and chalets and covered in trees brilliant with autumn colours. You couldn’t get bored of looking at the gorgeous scenery and we managed to get a few photos from the train, although they dont capture the beauty all that well. 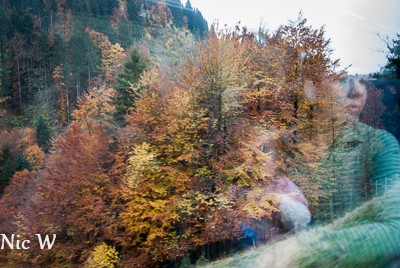 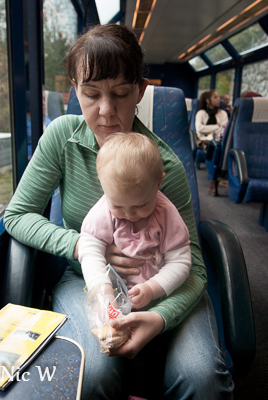 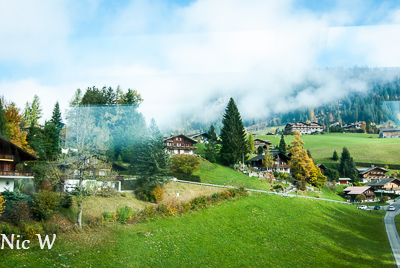 We did have to laugh at the woman who deliberately slept the whole way through the trip, a bit silly since it was a scenic trip and she was in first class.  This leg was about 2 hours, although you could have gotten off earlier as some people were stopping at various towns along the way. On our pass we needed to go all the way through to Zweisimmen. Astrid was good for most of the trip but it dragged on a bit for her at the end and she was hungry and tired and refused to nap. The last 20 mins were a bit of a tanty fest but she calmed down once off the train and we walked around the cute town of Zweissimmen and found some (late) lunch.

Zwiesimmen
Zwiesimmen is a winter sports town and although the Ski season isn’t far off it was pretty much deserted. We eventually found a cafe that was actually open for lunch. It was a little German place and did really good food. It is so weird that in Montreux they all spoke French and it was very French influenced. As we passed through more towns during the morning the names got more German and by the time we got to Zweisimmen they were all speaking only German and the food was German.

The train announcements in the morning were French then German, then 2 hours later were reversed! Our brains took a lot of retuning to start speaking German again. Given our German is way better than our French, it shouldn’t have been as hard as it was for the first few hours. 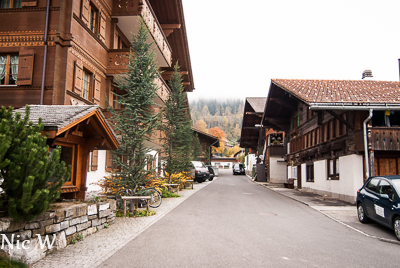 Astrid enjoyed some schnitzel, chips and omelette for lunch and even conned some chocolate out of the waitress who was enjoying playing peek a boo with her.  She also entertained all the oldies who were in for their afternoon beers and coffees.  We had a walk around Zweisimmen and looked at all the nearby cows amongst the chalets. All the cows have bells and as you walk around all you can hear are cow bells clanging. 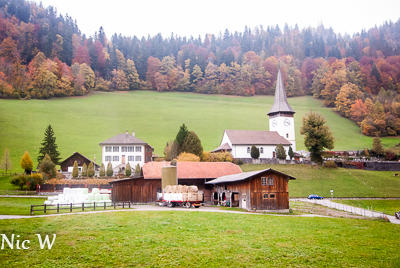 Back on the train for the second leg through to Interlaken, we came equipped with even more unhealthy snacks to keep the little miss occupied. She was pretty good on this leg and we started seeing more huge mountains appearing and it was obvious we were in ski country now, although now snow quite yet.  We made it into Interlaken just before 5pm and found our hotel which is very conveniently located across the road from the train station. No where near as nice as last nights hotel but it will do the job.

Interlaken
Interlaken is again in German influenced territory, so German is predominantly spoken and the food is very German. We found another brasserie for dinner and Astrid was again enterained by the waitresses who gave her puzzles and played games with her. She has eaten a lot of chips and bread today, but it’s all food right?

She is currently happily sleeping in her cot after another long day. Tomorrow is a lot of train time up to Jungfrau Joch, were there will be snow…….