We planned a quiet day since we were tired after the last few days of travelling. We also had a mountain of washing to catch up on. When we had arrived home the previous night we realised a certain young lady had left the fridge slightly ajar (her favourite trick) and pretty much all the food in the fridge had to be thrown. This meant a big shop for groceries as well.

We caught up on most of the washing and shopping/cooking in the morning and let Astrid have a decent lunchtime sleep so headed to the park in the afternoon. It was still cold out so after an hour or so we went back to the apartment for some hot chocolate and episodes of playschool.

So for today’s update here are our thoughts on Switzerland:

We knew we wouldn’t get to see everything in our 5 days/4 nights and there are definitely things we want to go back and see.  We were fairly underwhelmed by Geneva, but we might have just had a bad day. Plus we were tired. Montreux and Luzern were lovely towns to walk around and we could have spent longer in both.

Interlaken wasn’t that exciting, although we didn’t really see much of it and used it as a base. We would have loved to have stayed longer in one of the towns further up the Alps. We could easily have had a few days there and done more exploring of the alpine regions and some of the walking trails. Grindelwald and Lauterbrunnen were lovely, but plenty of others we passed through also looked great.

Despite the appalling weather we loved Zurich and would have loved to have spent more time there. We will have to go back.  There were also plenty of places we didn’t see. We didn’t get to see any of the Northern regions or the South-Western Italian regions.  Definitely a country to go back to at some stage.

The Trains:
The rail system is brilliant. All the trains were clean, comfortable and efficient. Aside from a few issues working out connections we had no complaints. The international commutes between Paris and Geneva/Zurich were great and less hassle than flying.  Most of the smaller towns had free train/tram/bus connections for tourists which made life easy and the bigger cities had reasonably priced passes.

The trains do very much run on time. The first day or so we were freaked out that the trains just took off without warning. No door closing sound, no announcements, no warning at all. They just leave. The first couple of times Astrid and our bags went flying as we were unprepared. We soon figured out that they go by the railway clocks (which are all perfectly synchronised). Once you know what time your train is meant to leave you just know to be seated and ready at exactly that time.  There are copious clocks around, and all the trains had them so it was easy once we knew. Anto also synchronised his watch to ‘train time’ which made it easy.

They often didn’t make announcements about stations and stops so sometimes you just had to guess how long til your station. The time stopped at each station would also vary as the train would leave when it got to ‘exactly’ it’s leaving time. This meant we often didn’t know how long we would be stopped for in order to get ourselves and all our gear off (and Astrid in the carrier) so we sometimes had to rush around just in case.

The currency:
Switzerland uses Swiss Francs and it is worth slightly less than an Aussie Dollar. It made it easy to see how hideously expensive everything was. The food was extremely expensive in restaurants and cafes, but fairly well priced at the supermarket.  So if you could do your own catering it wouldn’t have been too bad. Coffee and soft drink was very expensive, but beer and wine not so much. Chocolate was very well priced and delicious!

The Swiss Francs seem to come in stupid coin denominations. The 5 Franc is a silver piece that looks exactly like an Aussie 20 cent piece. Very deceiving, when you are carrying around a pocket full of them and you realise how much money it is. For 10 Francs they go to a note that looks like our $50.  The half Franc looked like a 5c piece and again you could end up with a ton of them in your pocket.

The language/s:
It was very odd swapping between German and French in different towns. We didn’t go to any of the Italian areas, but Luzern had a lot of Italian sections, where everything was Italian food in German. Another odd experience. The Swiss all spoke French and German with very precise accents to it was actually easier to understand than French in France or German in Germany. They were also more willing to swap to English than the French and pretty much all spoke some English.

Weird hotel things:
All the hotels we stayed at gave us a heap of hand towels and no face washers. They also have towels that are a good large size, unlike most hotels where you struggle to find one big enough to wrap around yourself.  When they made up the beds, they always put 2 single bed doonas (folded lengthwise) onto the bed, so each person had their own doona.  The baby cot (porta cots) were really  nice, with big thick mattresses and came with a pillow and thick doona. They obviously don’t care about SIDS guidelines in Switzerland. Astrid didn’t get the doonas, but she had her sleeping bag anyway. She enjoyed the more comfy matresses. All hotels seemed to include breakfast, which was good given how expensive food (and hotels) are.

All breakfast seemed to consist of copious different choices of meat, cheese, yoghurts and breads. It was generally really yummy though.

Going out with a baby:
Every time we went into a restaurant or cafe they appeared with a highchair automatically. Very different to France where you have to ask and may or may not get one.  They also assumed that you weren’t going to feed your baby as they never asked if we wanted anything for Astrid and if we did order something (or ask for an extra plate so she could share ours) they looked at us like we were weird.  Generally they loved babies though and she got tonnes of attention, biscuits and chocolate and multiple people offered to take her home.

General impressions:
The food was good, but not as good as Paris.  The German influenced food was pretty good quality but the French influenced just wasn’t as good as what we were used to. It’s hard to beat Paris though!  The food was nice everywhere we went and we  enjoyed most of our meals.

The people were very no nonsense. They don’t chat much (unlike Paris) but were friendly and  helpful.  We didn’t get hassled at all and we didn’t really see any homeless people (unlike Paris, where there is one on every corner). Of course the Swiss probably hide them all, or it’s too cold……..

The scenery can’t be beaten and photos couldn’t do it justice.

They really do love banks, watches and chocolate….. and Roger Federer……. all 4 were everywhere!

A picture of Astrid in her new French coat and Swiss hat: 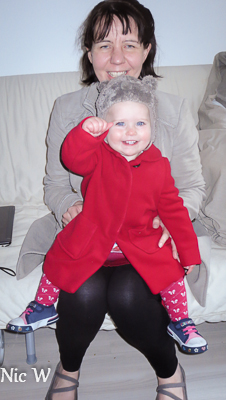