For some reason Nic and Anto stayed up late to catch up on blogging and forgot to go to bed at a reasonable hour, despite being deathly tired. Astrid woke up at 7.30am and a 12.5 hour sleep is great, but we had been up late and wanted an extra hour at least.  Sadly, she was convinced it was getting up time. At least the bunny bag is still a hit and kept her amused for awhile, along with wearing her dad’s hat. 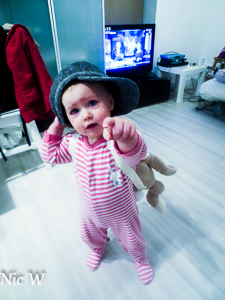 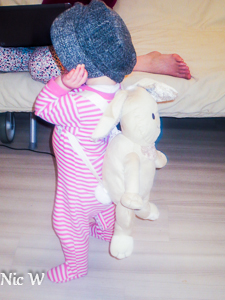 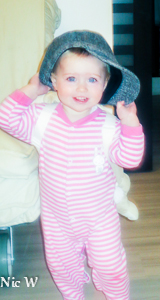 Getting into the Parisian spirit we had scrambled egg in crepe for breakfast (you can have crepes with anything right?) and headed out for a walk and in search of icecream. Of course we hadn’t checked the weather and discovered it was raining….. back for an umbrella. Then Anto forgot his GPS, back again. Then after 5 minutes of walking we decided it was actually cold and Astrid was getting wet so back to get one of her snowsuits on. About half an hour later we finally were on our way and off the Ile de Louis, one of the islands in the Seine, we had yet to thoroughly explore.

It was a wet and grey day, but still pleasant walking along the Seine and through the Autumn leaves.  In typical style Astrid fell asleep in the pram and we decided to let her sleep given how tired she was.  We arrived at the Ile and decided to do a lap to check out the stores while she was sleeping.  Lots of cute souvenirs stores, bakeries and restaurants and we picked up a few nice things. I hear our suitcases bulging at the thought of all our shopping. While we were in a shop Astrid woke up so we took her next door to Berthillon, who were actually open today (unlike our previous attempt)!

In my random internet readings I’d read that Berthillon is fantastic icecream and it gets really busy at their store and you can end up lining up outside. When we got there it was 11.20am, raining, a Wednesday and Winter. There were about 5 people inside. Lucky since it isn’t big. As to whether it’s good icecream….. hell yes! We weren’t disappointed. We were both thinking it might be good, but how good can it be? Pretty damn good it would seem.

Anto ordered the French toast with poached pear and salted butter caramel icecream.  I was going to have the salted butter caramel icecream but since he was trying it I went for a scoop of Pistache and the Choc-orange praline icecream. It came with whipped cream, praline and chocolate sauce and a wafer. Anto had a cafe express but I thought I’d try my luck at a hot chocolate and it was delicous. A jug of rich chocolate and hot milk to mix to taste. I could have just drunk the chocolate but milked it down a bit so Astrid could try some. 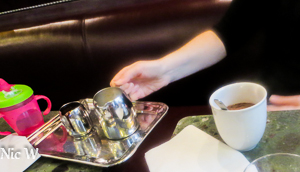 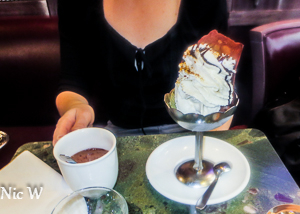 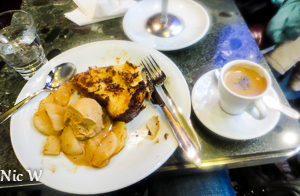 The icecream was divine. They weren’t at all sweet and they were really creamy (not at all icy) just how we love our icecream. The salted butter caramel was salty and rich and caramely and divine. The pistache was lovely and nutty but the chocolate one was a winner. Rich and chocolaty with bits of praline and orange peel throughout. Surprisingly Astrid wasn’t a fan of any of the icecreams. I don’t think they were sweet enough for her. She did love the french toast with cream from my icecream and the wafer. She also devoured the hot chocolate.

Full to the brim, we walked back to our apartment and picked up Astrid a croissant on the way for a snack, as she hadn’t eaten much icecream. When we first arrived in Paris we used to scoff at the babies being pushed around in strollers as they munched on whole croissants….. now we are ‘those’ parents 🙂

Once back in our apartment Astrid refused a nap.  We tried for 2 hours but her hour sleep in the pram was enough….. apparently. Her parents were less than impressed since we were tired. Figuring staying inside with her was a bad idea we headed to Galeries Lafayette for some shopping.  We had been to Galeries before, a few weeks back and given it was a grey and misty afternoon we decided to head back. Of course we did end up seeing the sun briefly during our walk up there but it still would have been too wet for the park as it rained all morning. Walking up to Galeries, which is in the 9th arrondisement (our apartment in in the 2nd) is a pleasant walk, through Rue Montmarte and Rue Lafayette and down the Grand Boulevards.

On our walk about a million people got in our way. It’s like it’s Paris and they think they can casually stroll about without a care in the world. We walk, stroller and all, like we are on a mission, so we weren’t impressed. More of the same when we got to Galeries. People were everywhere and generally being in our way. We finally got up to the 5th an 6th floors and looked through the children’s sections and browsed the souvenirs and tea areas and purchased some tea we had been eyeing off. Astrid then caused havoc in the lingerie section where she was being cute and got kissed by shop assistants. We finished our shopping trip with a visit to their gourmet and produce section and marvelled at the array of delicious things……. even if many of them were meaty and not to my liking. The display of duck offerings ‘Le boutique du canard’ alone was impressive.

with a tired and grumpy bub we decided to head back to the apartment. In the last few days a lot of Christmas decorations have gone up and we stopped to let Astrid look at the display windows outside Galeries Lafayette. They were impressive, with dancing pandas, penguins, polar bears and various other creatures.  The French really know how to do Christmas displays. Kids were milling around everywhere trying to get a look! 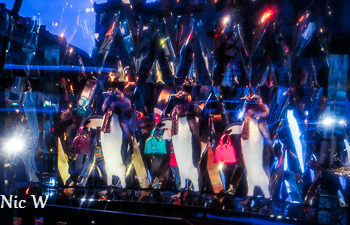 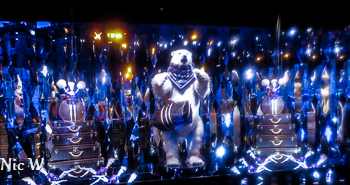 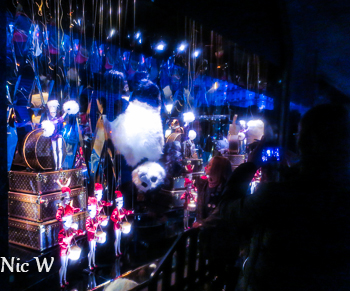 Walking back to our apartment seeing all the Christmas lights come on and the displays was very pleasant. We won’t talk about how Astrid fell asleep in the pram and then after dinner decided that she would chat for 45 minutes before actually going to bed!

Once in bed her parents enjoyed some wine, some left over savoury crepes and too weary to wander to one of the patisseries on our street for dessert, we settled for some supermarket vanilla bourbon creme brulee which was still better than I have had in even the nicest restaurants at home.  So good, we should get more…….