Another morning in Paris, another morning where Astrid decided that why sleep in when you can be up doing things. It was her 17 month birthday and she decided to celebrate by not sleeping in.

Breaky was a restrained affair followed by an early morning (by Paris standards) wander to Place des Vosges, apparently the home of one of the first planned squares in Paris. It was interesting to note that the original bronze statue was replaced by a stone one in the middle of the 18th century. After a wander around and a look at some galleries containing art that we are unlikely to be able to take home (or afford) we found a charming little cafe for this mornings coffee and pastry – this time with no chocolate as we were being ‘heathy’…. 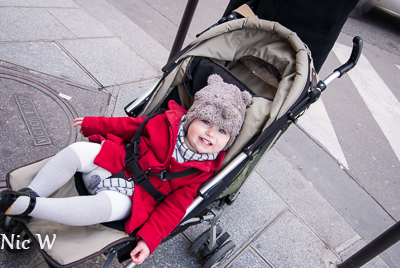 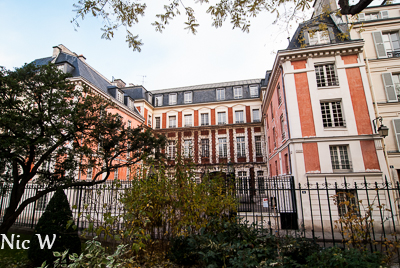 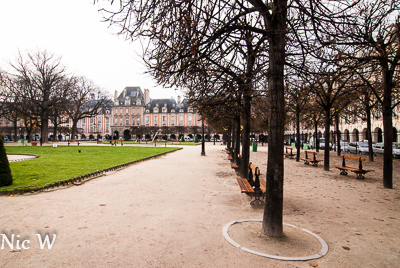 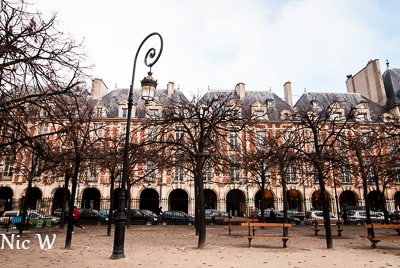 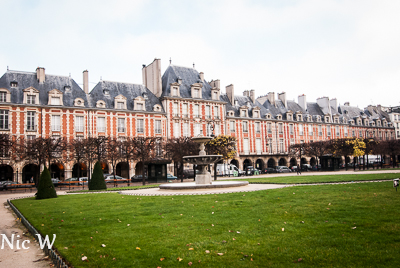 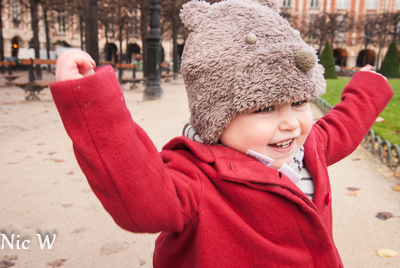 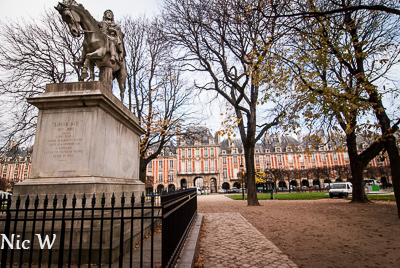 A wander back ‘home’ and it was time for Astrid’s compulsory nap before our afternoon of travelling – being asked to nap at 11am didn’t agree with Astrid, but after some perseverance her parents won. While Astrid resisted sleep Anto headed ‘into town’ (OK – 5 meters across and down the street) for some bakery supplies. Picking up a nice crusty rye baguette, a pastry for Miss A’s afternoon tea and a couple of gateaux for the adults lunch. We have had to up the stakes regarding our patisserie products as we realised that there were too many patisserie products that ‘needed’ trying and we are running out of time. A problem made only worse by the bakeries swapping over what they make fairly regularly meaning even more options appear. So, instead of one gateaux every other night we have progressed to 2 for lunch, it seems….. 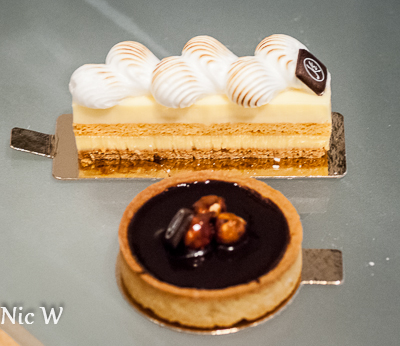 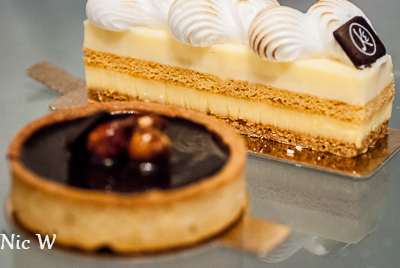 The gateaux today was a heavenly citrus sponge and meringue, followed by what may be the best thing so far a hazelnut and chocolate tart – once again with just perfect pastry that was both easy to cut through, stuck together when you wanted it to and tasted wonderfully buttery without overpowering the tart. It also tasted like a Rerrero Rocher chocolate in tart form, very yum!

After a quick manufacture of luncheon baguette and a last minute bag pack we headed out the door for our metro connection to today’s train. The Metro was a stupidly efficient experience – with the train rolling in as we made it to the platform and rapidly transferring us to Paris Montparnasse, at which point we remembered there was about 10 minute walk / travelator transfer between the metro and the ‘grand lignes’ long distance trains. Even with the unexpected delay we made it to our TVG with about 10-15 minutes spare, ready for our 300km odd journey West to Mont St Michel.

The train to Rennes left at the very French time of 5 minutes late, with our first class cabin fairly (possibly totally) full. Unlike previous cabins where they seats were in a fairly conventional arrangement this cabin had ‘rooms’ of 4 seats grouped around a table down one side. The groups were partitioned off with glass creating what would be a nice private space if there were four of you in a group – sadly for the other two people sitting facing us they were trapped with a couple of Australians and an obviously excitable small child. For the first hour or so of the 2 hour 20 minute journey Astrid passively sat where she was meant to eating her lunch followed by watching her favourite TV show, interspersed with looking out the window. For a while it looked like she might have a nap and sleep her way across France. Sadly this was not to be the case. An increasingly frustrated and bored child jumped, chatted, cried and made use of her new most favourite word ‘no’. She also upended a bottle of water on her mother, who then got to spend the rest of the journey in wet jeans. Luckily our fellow passengers were understanding (or just didn’t have a choice) and before we knew it we were in Rennes.

Once off the train in Rennes there was only a small amount of confusion as we stumbled towards the bus connection, with signposting pretty good and excellent electronic displays all over the place you have to try pretty hard to end up at the wrong place. The bus out was fairly empty, probably 10 passengers on a full sized coach which gave us room to spread out and keep Astrid slightly away from the other unsuspecting travellers.  We fairly rapidly headed through Rennes, which appears to be a fairly sizeable semi-industrial city, and then out into the French countryside, which was green and fairly flat. It was interesting that within a few minutes we were travelling through obviously rural villages (some of which looked absolutely lovely) complete with stone houses and quaint looking shops. Unlike Australia there seemed to be a village about every 5-10 minutes. Around 40 minutes into the journey we started both seeing signs for the Mont as well as watching the sun rapidly sink. In the end the sun won the race leaving us in the dark (which Astrid was proud to let us know, she likes the word dark!) for the last 10-15 minutes of the trip. This proved to be a blessing in disguise as we were greeted with the sight of the Mont all lit up appearing out of the water as we drove closer – an amazing sight that produced gasps of excitement from some of our fellow travellers. As the Mont is an ancient fort they entirely failed to think of the needs of tour buses during it’s construction, which results in millions of tourists being deposited at the bottom of the hill and allowed to walk up. We were expecting this so it wasn’t a shock – from reading some reviews before we came obviously we were the exception rather than the rule. As you walk in you could see the old road and car park – which you used to be only able to use at low tides. Recently, a modern causeway was installed to rectify this problem meaning you can no longer get ‘stuck’ on the island. A quick wander up the (first of many) rises took us to our hotel, which appears out the side of a fairly solid looking stone wall. Our room was ‘helpfully’ on the 4th (top) floor which should provide excellent views in the morning and amazing exercise tonight as we trudge up and down the narrow winding staircase with a small child. By the time we climbed the 83 stairs to our room we were very glad we had packed lightly and taken the smallest bag.

After a quick freshen up we headed out to dinner – once again our research had left us slightly worried  with people complaining abut the 25 euro omelets available from the restaurant attached to the hotel (for the record it apparently contains both lobster, other seafood and truffles and was cooked in a open wood fire). Deciding that we didn’t need $75 worth of eggs we took a quick tour of the dining options and decided that in the off season they pretty much all had similar menus so we randomly picked one and wandered in, to the curious looks of a couple of waiters having dinner, as when Anto enquired about the possibility of perhaps acquiring dinner one of the waiters checked his watch (we can only presume it said the same as ours – 18:45) after a fairly French shrug we were shown a table in front of a huge fireplace and in a short space of time menus and a baby seat appeared. Which was pretty much the last we saw of the restaurant staff until shortly after 7pm. Once they did re-appear our orders were quickly taken and dispatched to the as yet underutilised kitchen.

The three course menus were cheaper than individual dishes, so Nic ordered a vegetarian salad, the ‘traditional’ Mont omelette and a caramelised apple tart. Anto had an entree of the traditional omelette  a scallop and seafood ‘stew’ and a warm chocolate cake/pudding. The ever lucky Astrid received a hamburger ‘steak’ (patty) and chips followed by icecream (one of which was at least fruit coloured). The meals were significantly larger serves than we are used to – and some people didn’t manage to finish theirs. It may be noted the same people that didn’t finish were also observed to be putting the very excellent local butter on one of their chips before consuming it. It is probably also worth noting that Anto didn’t have any chips with his meal…

During the meal Astrid demonstrated wonderful use of the English language especially the use of the phrase ‘no, no, no’ which is cute the first time and less so the 20th. It took almost 60 different words before she learnt ‘no’ and now we are very sick of it! As usual she had ‘special’ grins for both the restaurant staff and the few other patrons. We got the impression that this place would be flooded with tourists in the summer, not an issue we currently have to deal with. 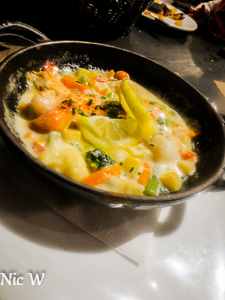 Much to Astrid’s delight we found many cats running around all the stone walkways and ramparts. It’s obviously a good place to live if you are a cat.  They seemed healthy and well fed. We assumed they were used to keep the mice down.You can just see the cat in the archway of this photo as Astrid and Nic checked it out! When we made it back to the room and Astrid was ready for bed Anto ‘went out to the shops’ with the camera to take some night photos and explore our surroundings. At night the Mont is an incredible place – you can easily see how they managed to hold out against attackers indefinitely. There are loads of hidden nooks and crannies – but also some quite nice formal gardens (most of which have a low stone wall around the edge and what seems like a 10 story(ish) plummet to the sand below if you are silly enough to fall over the edge. Once Anto completed his stroll he swapped places with Nic forsaking the cold windswept rock for the (slightly) overheated hotel room. It was really pleasant (if cold) out wandering the Mont at night, without tourists everywhere and it all lit up and very beautiful. One of the best experiences of our trip so far.  We are very pleased we stayed on the Island that night so we had the opportunity to do this. 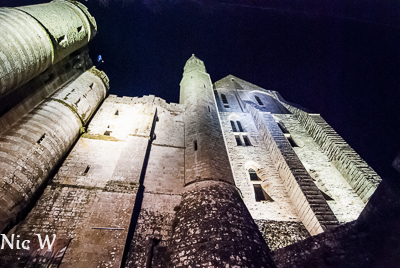 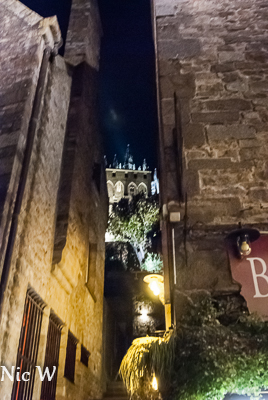 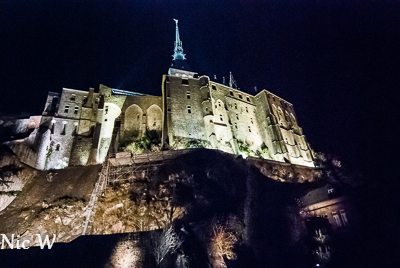 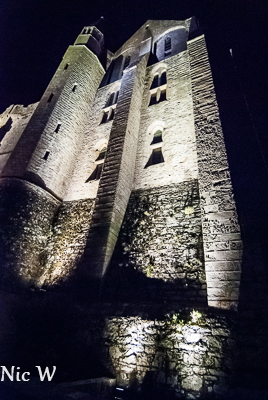 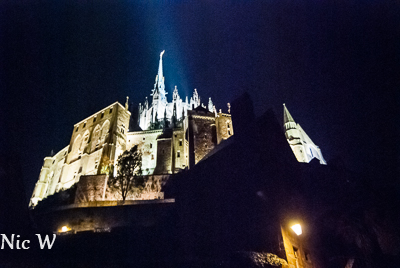 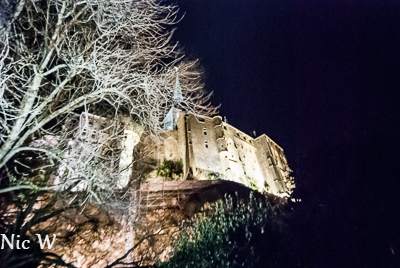 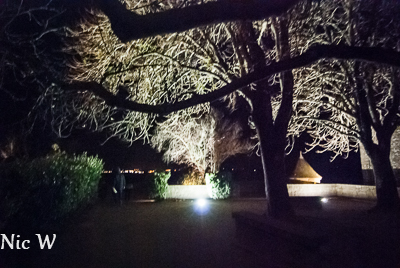 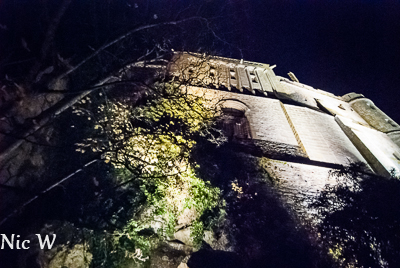 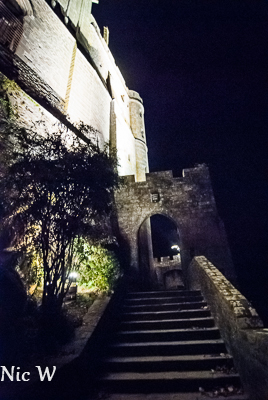 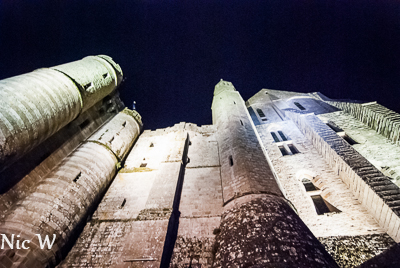 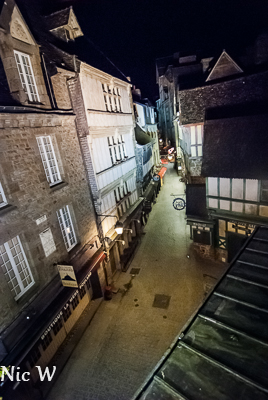