We all woke up a bit tired after a bad nights sleep (non-sleep?). Sadly, Astrid did  not think a good sleep-in and lazy morning was in order.  Plus we had to go fetch our passports. After breaky we headed out via metro towards the Australian Embassy. We went a slightly different way than the last couple of times which involved some walking at the end but it was a nice (but cool) day so we didn’t mind.  We got to the Embassy a little after 10am and were efficiently scanned in and sent to retrieve our passports.  It was a very efficient process that took all of 5 minutes, once inside. We now have documents that should guarantee us getting home. We might have gotten away with the other passports but we didn’t fancy being refused entry to the UK, even though more time in Europe would be nice…..

After passport retrieval we thought we should do some shopping.  Not up for too much walking after yesterdays biking we decided to catch the metro, but getting to BHV (Bazaar de Hotel de Ville) shopping centre is a little tricky from the Embassy and somehow took multiple changes.  We did encounter possibly our rudest French person yet (mostly they have been very polite)…. this old lady started screaming at a large group of young (5 year old?) children trying to board the metro, with their carers.  Instead of nicely asking them to let her out, which they would have done, or been made to do, she just repeatedly screamed ‘pardon, pardon, pardon’ in a haughty voice at them and scarring them witless. She was seemingly quite quickly told off by others, but the whole thing was very rude and unnecessary.

On our walk through the metro’s we came across some more buskers in the corridors. This time a whole jazz ensemble.  The metros all have long tiled corridors that snake under Paris. You often find buskers inside and most of them are very good. The sound travels through the corridors well and it is quite pleasant to listen to. We often come across them on our late night returns from International trips, but this time it was about 8 Jazz musicians together, singing and playing, in the middle of the day. Very cool! We have also found buskers on the actual metros, and it’s a fun way to pass the time.

Once at BHV we did a bit of a whip around looking at any specials and deciding on what we ‘needed’ to buy. We decided to buy each others Christmas presents while we are away, since there is plenty here we want and there is no point finding some random thing when we get home. So, Anto purchased my present and I’ll act surprised when I open it on Christmas day!

We then headed to our favourite chain store cafe next to BHV and had probably our last morning tea there. This morning it was pain au chocolat and a framboise tart, with coffees.  Even though the pastries at this chain store aren’t *quite* as good as the specialist patisseries, they knock the socks off most things you will find in Australia.  Savouring our last mouthfuls, we went out the front of the BHV to have another look at their Christmas windows. They have very cute displays at the moment and Astrid loved watching the large bobbly headed women and the cute bears on a balloon.  We are loving the Christmas windows popping up everywhere and the sparkling lights and it is making us a little sad we won’t actually be here for Christmas. 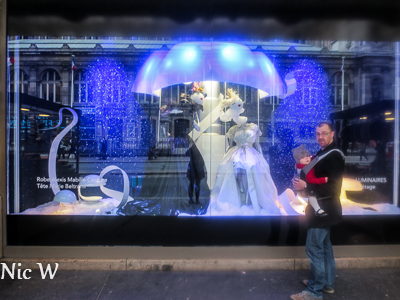 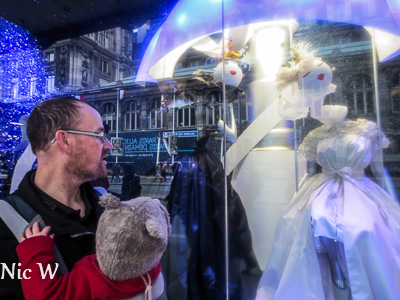 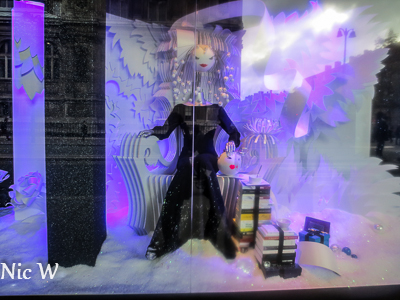 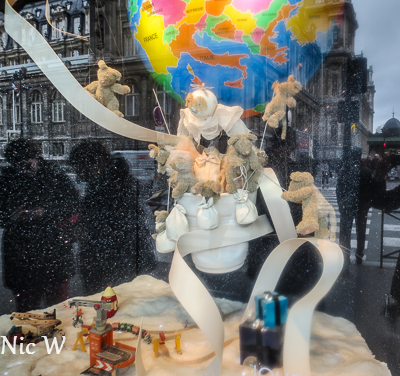 We then headed back to the apartment, desperately trying to keep Astrid awake so we could get her to have a ‘proper’ sleep. It’s about a 25ish minute walk back and she kept trying to fall asleep on us, so Anto would poke her and ask her ‘where is the dog?’. She would wake up and look around and pronounce the dog ‘gone’ and fall back asleep……  this kept going on until she eventually found a dog, which resulted in laughter and sleeping while laughing 🙂

Once back, the previously exhausted child got a second wind and tried to avoid napping, much to her parents extreme irritation. She did *eventually* go to sleep and we all tried to get some rest.  Post napping, and a late lunch we headed out for Christmas shopping part 2.  We had previously seen lots of kitchen supply (pots, pans, baking items etc) shops on our travels. After some research Anto discovered some of the ones we regularly walk past are the absolute best in Paris (and famous all over the world)! We had a list of a few to go to, only a few hundred metres from our apartment.

We headed out and found ourselves in Nic and Anto heaven. Our favourite kitchen place in Canberra has nothing on these places. We could bankrupt a small country in them, so much to buy, and things we just don’t see at home. The copper saucepans, the biscuit cutters, the extensive pastry pans, the chocolate molds………. we were in heaven! The hard part was deciding what we really needed and could actually fit in our bags.  Anto got some items as his Christmas present (he will again act surprised when he opens them) and we got a few other things we decided we needed.  Astrid scored some presents too.  We won’t talk about how much money we spent or how on earth we are getting all of this home……..

We could have spent all day in kitchen shopping heaven but decided to take Astrid to the park. Down to the local Jardin Des Halles, which is just around the corner from where we were. She had a quick play and is getting more confident with the slippery dip. It started getting quite crowded at about 5pm and the bigger kids were dominating all the equipment she wanted so we headed back to the apartment via a patisserie to pick up tonight’s dessert.

Astrid trying on one of her new Christmas presents and enjoying (probably) her last play at the park: 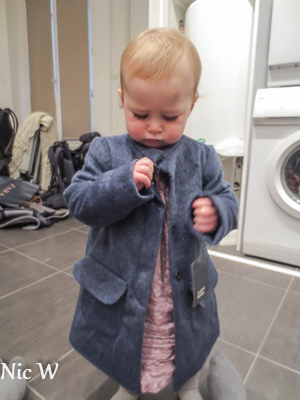 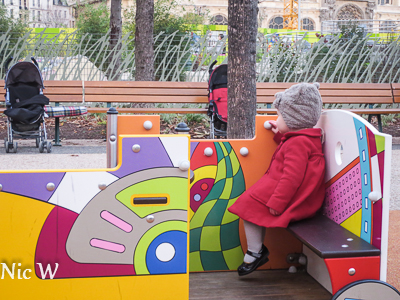 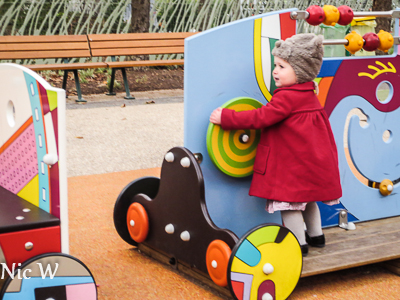 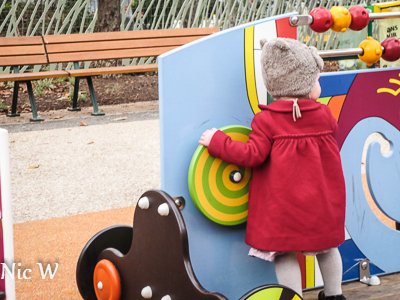 Once Astrid was safely in bed we had dinner and started the mammoth task of packing some bags. We came over with some empty suitcases and spare bags and we still think we are going to be short of bags. We have an entire (big) suitcase full of chocolate and biscuits…….  During a break from packing and cleaning we indulged in a little mulled wine and our cake of the night, a Royale, which turned out to be a light chocolaty mousse with a crunchy layer on the bottom. Very yum! 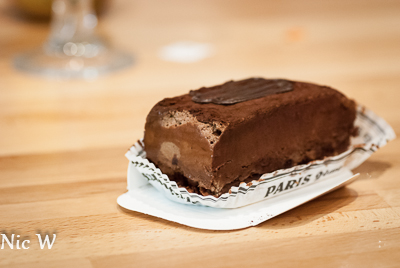 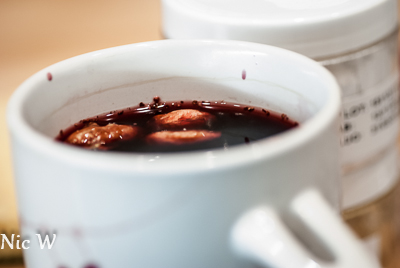