Another day, another early wake-up.  A certain someone is growing  more teeth and is a bit unhappy 🙁 Aside from us wanting more sleep, it wasn’t the worst thing in the world to be up early as we had a lot of packing and cleaning to be done.

Our real estate agent was ‘helpfully’ showing the apartment to someone else and it looks a bit like a bomb hit at the moment. We were simultaneously trying to pack some bags and clean up, while keeping a small child out of our way. Luckily she thinks that playing in boxes and suitcases is pretty funny! After a few minutes of silence we found she had put herself in a box, in a drawer………hmmmm, toddlers! 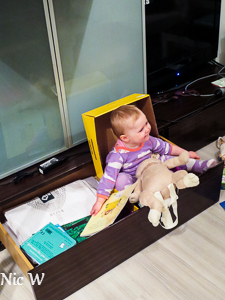 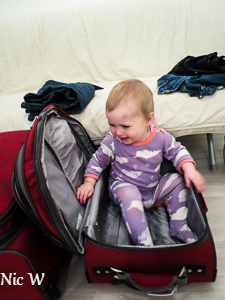 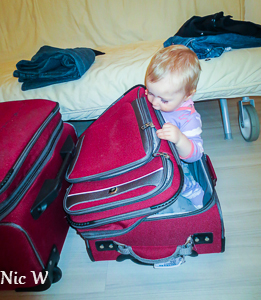 After getting the apartment to a respectable state, we headed out to Musee d’Orsay.  It was getting late (10am) so we decided to metro down. We wanted to take the stroller, which is always a pain with the metros, but we picked a route that mostly gave us a chance to use escalators, so not too much stroller carrying was required.  Before long we rocked up outside Musee d’Orsay to see a huge line up. The advantage of strollers is that you can usually queue jump in Paris. Sure enough we got waved through the ‘reserved ticket’ line, despite having no ticket, and avoiding at least a 20 minute queue.  We also got waved through security, since baby bags never contain anything you want to scan or even inspect (apparently).

Once tickets were purchased and we were inside we struggled to find some lifts (the downside to having a stroller). But, Anto managed to understand an entire conversation in French and we finally discovered the lifts were all well hidden in walls, with just the odd sign belying their presence. The Musee d’Orsay is on the left bank of the Seine. We have walked (and cruised) past several times but were keen for a visit before we departed Paris.  The Musee is housed in the former Gare d’Orsay, which is an impressive Beaux-Arts railway station built between 1898 and 1900. The museum holds mainly French art dating from 1848 to 1915, including paintings, sculptures, furniture and photography. It is best known for its extensive collection of impressionist and post-impressionist masterpieces (the largest in the world).

No photography is allowed of any of the exhibits, but we had fun wandering around and looking at them. A lot of the paintings, especially the Monet’s we had seen a few years back in Canberra, but this was a more extensive collection and some paintings we had never seen. After we covered off the top floor, Astrid was getting antsy for morning tea so we headed to the 5th floor cafe, which was an impressive looking cafe with cool chandeliers, funky art and the inside of the impressive clock faces. We had coffee, hot chocolate and the world’s biggest chocolate eclair (and probably the most expensive, but it was huge!). Astrid was a fan of both the hot chocolate, which was good, but not as nice as Laduree or Pauls and she also seemed to enjoy the eclair. 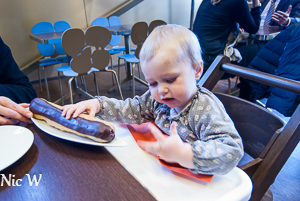 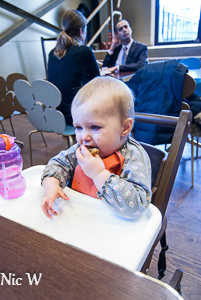 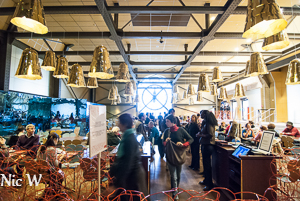 Fueled up on chocolate we headed down to the lower floors to look at the furniture and sculpture. After minimal whinging she fell asleep in the stroller so we could happily wander in peace. We got most of the lower floors accounted for while she was asleep and enjoyed some of the sculpture. We really enjoyed walking through the building and it is an impressive space to house a museum. The inside of the clock faces, funky couches and steel frames are really fun (and you could take photos of these)!. 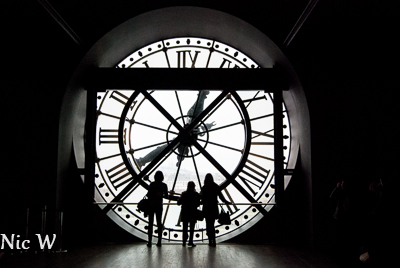 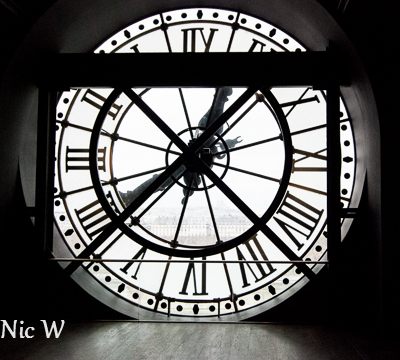 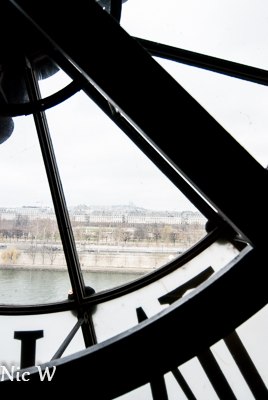 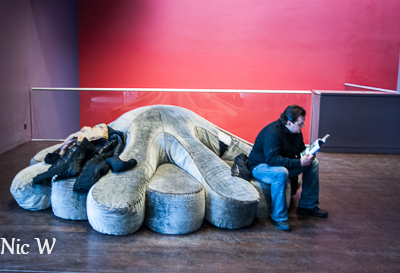 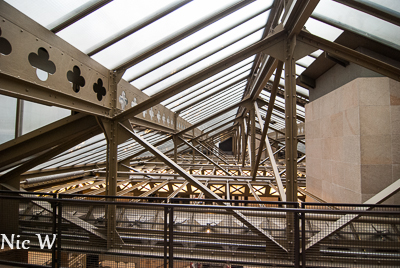 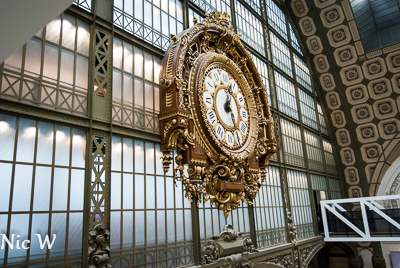 Sadly Astrid woke up and was not happy. We tried to look through the photography exhibits (which we were looking forward to) but she was a bit grumpy and not willing to play.  We headed outside and distracted her with the large animal statues in the courtyard, which were fun to look at. 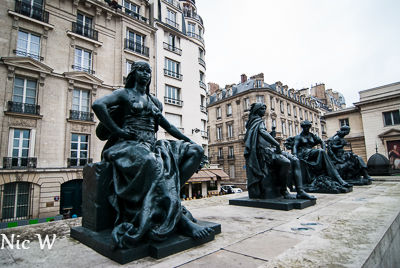 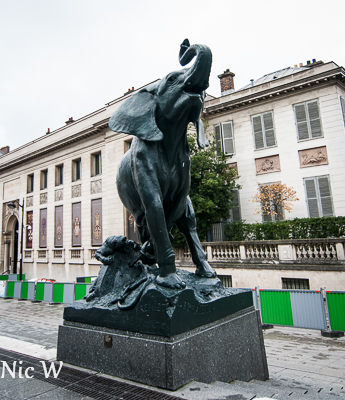 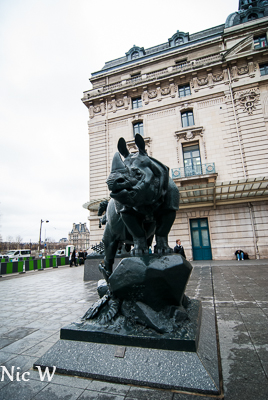 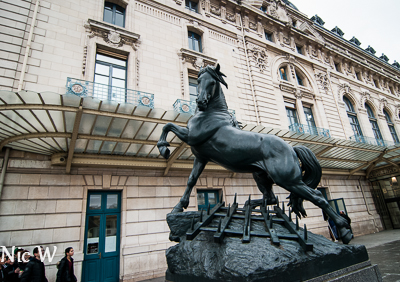 Hoping she would go back to sleep on our walk back to the apartment we headed off, walking back over the Seine and through the grounds of the Louvre. We know this area well now and it’s always fun to walk around, even when it is cold and starting to rain.  Astrid eventually had a bit of a nap but was still unhappy and waking up every few minutes so we alternated between looking in some shops while she was sleeping and walking back towards the apartment every time she woke up. Once we hit our street we stopped for some baguette and patisserie and she was happy to be carried and just wanted cuddles. Sadly for her she is getting very heavy these days and is hard to carry around for long periods!

Back in the apartment we had some lovely cheese and baguette lunch and tried to finish operation bag pack-up.  We think we can fit everything in that is getting shipped to London, but it’s going to be tight. Astrid improved her mood with paracetamol on board and helped ‘pack’.  We were packing the last of the chocolate up and she was being a bit grumpy so we let her try one of the cheaper (not hand-made) Belgian truffles. She was a huge fan.  About 20 mins later we were finishing off clearing out some cupboards and I turned around and let out some expletives when I found that Miss A had gotten into a bag, unwrapped a plastic bag and pulled out one of the truffle boxes, opened the box and was shoving handfuls of dark chocolate truffle into her gob. Of course she had picked the nice hand-made ones!  She did look proud of herself but we didn’t get a photo in a rush to stop the chocolate destruction.

It was a rainy and cold afternoon so we took Miss grumpy pants out for a walk down the street to buy some more dinner groceries and paracetamol for Missy. We also paid one last visit to our favourite chocolate store on our street and collected some more chocolate to take home. I don’t know exactly how much chocolate we have collected but it is a lot……… and we still have 3 more days in Belgium. It would have been a lovely afternoon to sit tucked up in a cafe, but Astrid was not in much of a mood for that.  Back to the apartment as Anto had to head off for his night bike Tour.

My evening was far less exciting than his. One tired, unhappy and teething baby that need constant attention.  My plan was to spend the evening catching up on photo editing and blogging while working my way through some of the food products we weren’t taking home with us and needed eating. Sadly, miss Astrid wasn’t keen on that.  Luckily Anto had a more productive and fun evening and he can fill in the rest of the night…….

While Nic enjoyed her night of forced pantry cleaning Anto wandered down to the metro towards the Eiffel Tower – the meeting place for tonight’s Fat Tire Bike Tour. It had rained earlier in the day & there was a general feeling that the night would involve us getting wet (and probably cold to boot) the tour had 13 participants about 1/2 of which were Australian with a smattering of other nationalities to round out the group. The tour involved some easy riding around the centre of Paris, visiting (the outside of) Notre Dame, the Louvre and most of the other museum’s and heritage buildings we had previously seen during the day. Paris at night is rather lit up – it was no problem to see any of the buildings at all.

A highlight of the tour was the ‘dominate the taxi’ portions of the tour – most of the time we were riding in shared bus / taxi / bike lanes – we would stop to let the buses past (as they have little choice but to sit behind the bikes as there isn’t enough room for them to go around) however the Paris taxi’s seem to delight in being a little ‘annoying’ (perhaps not the actual word our guide used) and the only way to stop them being stupid is to ‘take the lane’ and make it clear that there is no way for them to sneak through the lane. This resulted in us riding around like we owned the roads – which was the exact effect we were going for.

Halfway through the tour we stopped for Berthillon ice cream (even though it was about 4C) the salted caramel was just as good when you were freezing to death as when you are eating it in a nice warm cafe. After a little more touristy looking at stuff, with some interesting history thrown in to make it ‘educational’ we made our way down to a dock on the Seine to commence the more aquatic portion of the evening… Included with the tour was a 70 minute boat tour of the river Seine – now just cruising up the river a 9pm would be OK – but in more traditional French style our guide pulled bottles of red wine from his panniers and opened a few before passing cups around. We thought that three bottles of wine might not be quite enough for the 12 drinkers, until it was explained there was actually 8 bottles available if we ‘needed’ that much. When one of the Aussies (who happens to own a vineyard) asked what type of wine it was she was told ‘red from a bottle’ – which apparently was as much info as we needed 🙂 The wine tasted quite acceptable and before we knew it the time had come to re-mount our bikes and wander ‘home’ to the tour company shop. After that it was a couple of quick metro’s back to the apartment – they are almost as efficient at 11pm as other times. 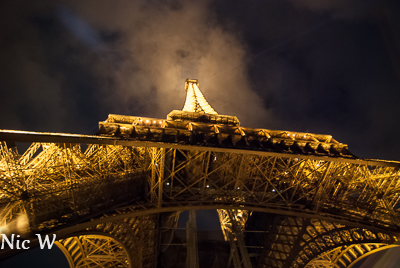 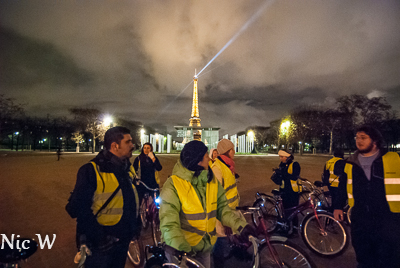 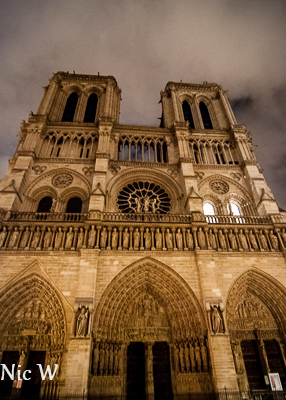 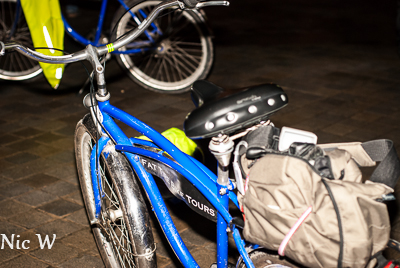 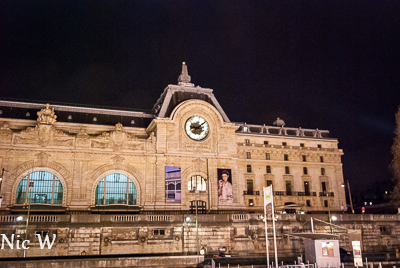 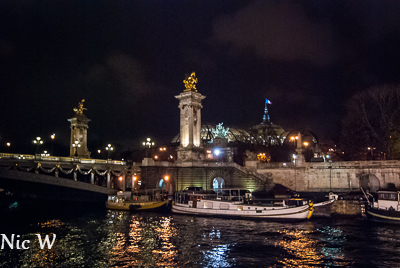 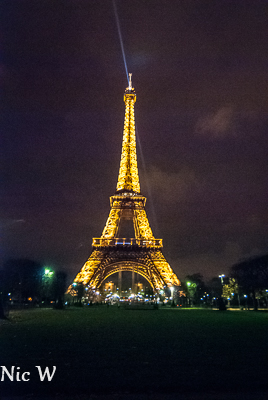