For days Astrid had been excited about the trip to Melbourne. So much so that the day before, after her lunch time nap, she insisted we go to the airport then and there!  We did convince her to wait til the Friday morning, although she was awake super early with all the excitement.

After an early morning, and uneventful run to the airport, we breakfasted in Qantas Club, while Astrid showed off her plane spotting skills. Identifying various planes and telling us when they were landing and taking off.  She enjoyed some fruit toast and pancakes and played on the computers, as you do when you are a toddler! 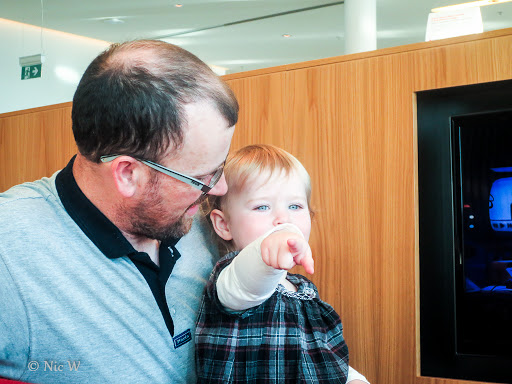 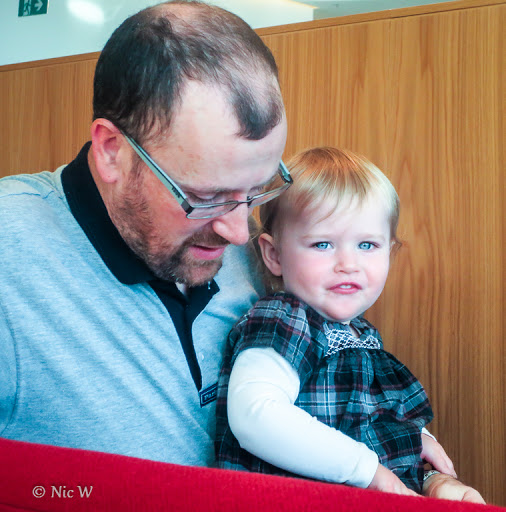 Off on the plane and she demonstrated how she is good on planes (only a ploy to make us take her on more trips, I’m sure) and coloured in and commentated on what we were flying over or through.  We had a row to ourselves and the flight passed quicky. Before we knew it we were in Melbourne and on the skybus through to the city.  The transfers were very efficient and Astrid enjoyed her bus rides and happliy sat on my lap and chatted.  All that travelling in Europe seems to have paid off as she was very well behaved for several hours in a row.

We arrived at our city hotel before 11am and were not surprised to find our room wasn’t ready. With a tired toddler we were hoping for some luck in that department so Astrid could have a sleep before the afternoon’s activities but no such luck today. The hotel thought we would have a room available by noon so we decided to head across the road to the Queen Victoria Markets and have a wander.

We were meeting friends at the markets later in the afternoon but decided that it would be good to have a wander first. The fruit, vegie, meat and deli halls were busy and we spied many tasty treats and thought we might have to do some hunter/gathering later that day.  After a wander around most of the fresh produce we thought we’d grab a quick lunch in the food hall and head back to the hotel to try and let Astrid nap.

Astrid and Anto elected fish and chips for lunch and Astrid was very pleased with their selection. I think this is the first time she had conned chips out of us since Europe and she hadn’t forgotten their tastiness…….. I had a much less interesting and slightly more healthy ricotta quiche and salad and we headed back to the hotel via the supermarket to collect groceries for the few days only to find our room was not ready, nor unlikely to be for awhile.  Astrid was in desperate need of a sleep after an early start to the day. Of course now we were loaded up with heavy groceries, including milk, so decided to plonk ourselves in the foyer and try and get Astrid to sleep on my lap. The foyer seemed to be filling up with overtired children, whose parents were all waiting to get into their rooms. 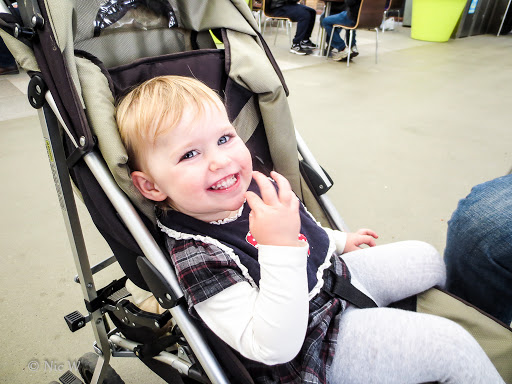 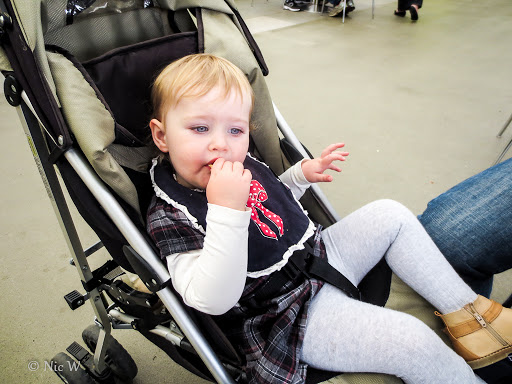 Astrid valiantly resisted sleep and at 1.30pm we finally got into our room, with just enough time to put away our belongings before having to head back to the markets to meet up with friends.  April from composed by April, Tania and I all know each other from when we were pregnant together at the same time in 2011. April lives in Victoria and made the trip into Melbourne for the afternoon (sans her toddler, Eliza who was sick at home). Tania lives in Brisbane but was conveniently in Melbourne on the same weekend with her husband and toddler, Finlay).

Tania’s husband elected to escape the girly chatter and left us and Anto to wander the markets with the kids. We didn’t manage buy too much at the markets, Astrid scored a winter hat and that was about it, before we went back to the fresh produce. Anto was quite keen on collecting cheese, meats, breads and various fruit and veg for our dinner that night and lunch the next day. We had a kitchen and fridge in our hotel so made best use of it. It was almost like being back in Paris shopping our street for tasty treats……. although the pastries weren’t quite as good and there was definitely less French being spoken. 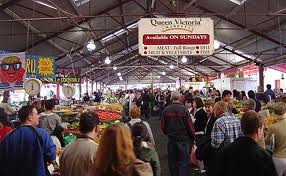 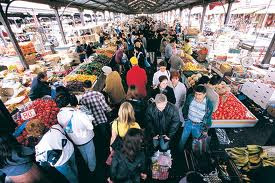 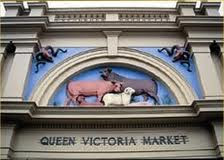 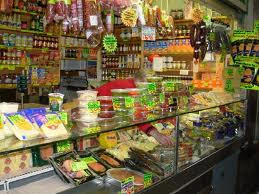 Loaded up we all headed through the city for a walk and to find some chocolate shops.  We decided on afternoon tea at Chokolait.  There were a lot of iced chocolates ordered (which looked and tasted delicious) and other tasty treats like icecream sundaes and chocolate mousses.  The kids got some yummy looking babycinos and also seemed to help themselves to our treats. I failed to get photos of the goodies but they were nice, even if we did overload on sugar and/or chocolate! April regretted her decision to have both a chocolate mousse and iced chocolate I think and barely made a dent…….

Astrid was very well behaved despite having had no sleep and her and Finn did have a little play together, and gave each other a few smooches despite being quite tired.  I think Tania got better photos of them together but there were definitely more smiles than my photographic evidence would suggest. 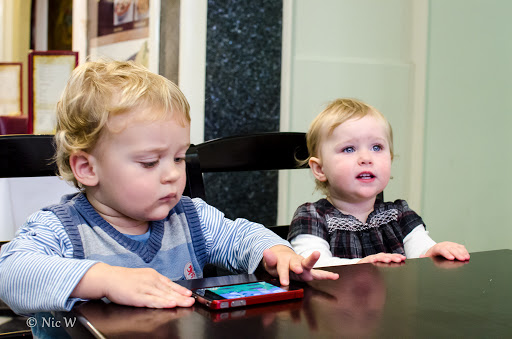 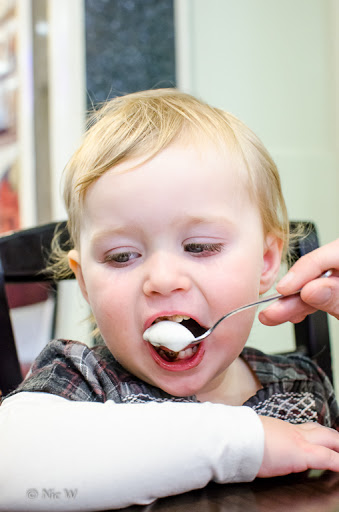 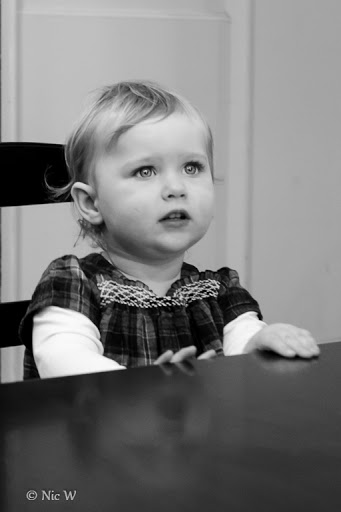 After a good afternoon on chatting and chocolate it was time to say goodbye as the toddlers were getting rambunctious and it was approaching dinner and dark.  We headed back towards our hotel, laden up with our goodies.

After a long and busy day we decided on a picnic in our room with our purchases and had lovely ham/cheese/tomato/sourdough sandwiches with fresh butter, all purchased from the markets.  Astrid certainly didn’t complain! 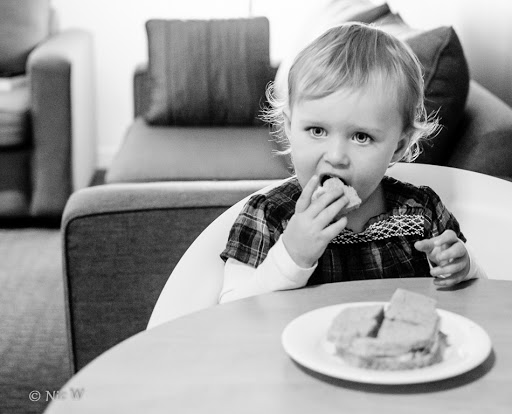 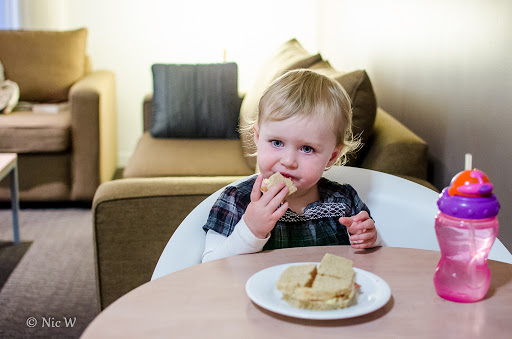 Lets just say the rest of the night wasn’t so joyful, but that is a story for another day.