We had a good sleep on our last night and Melbourne and woke up with a plan to try a nice cafe for breaky. I had gotten some cafe recommendations off the lovely Louisa and had been dying to try some out.  We figured this morning was a good opportunity.

Louisa had recommended a few places that were kid friendly and had great food and coffee.  The one we decided on was St Ali North, so we caught the tram to North Carlton and had a pleasant stroll to the cafe on a cool but sunny morning.

I can tell you the way to make you feel really old, sitting on a tram full of uni students (who incidentally looked about 14) chatting about their lives, while you wrangle a hungry toddler! My uni days felt very far away.  Nevertheless, we had a lovely morning ahead while they were off to further their educations. I think I had the better deal.

Once at the cafe we ordered our coffees, including a babycino for Astrid. This place seemed to take their coffee seriously and we weren’t disappointed.  The coffee was excellent and Astrid enjoyed the real melted chocolate in her babycino.  Feeling slightly warmer and more caffeinated we started on breaky. I had the super granola and it was extremely good! Anto had the ‘Big English’ and said it was excellent. I can attest to the fact that the mushrooms were awesome as I stole most of them!  Astrid had the spiced fruit toast and wouldn’t eat the labna but thought it tasted pretty good with butter.  It was damn good fruit toast. I sadly didn’t take any photos, but check out their website if you are interested in the food or coffee.

After another coffee for Anto we all headed outside so Astrid could have a play on the equipment.  She thought the park was just the right size for her and was having a ball despite it still being a little bit cool.  I grabbed a couple of quick photos on the point and shoot to at least document our adventure! 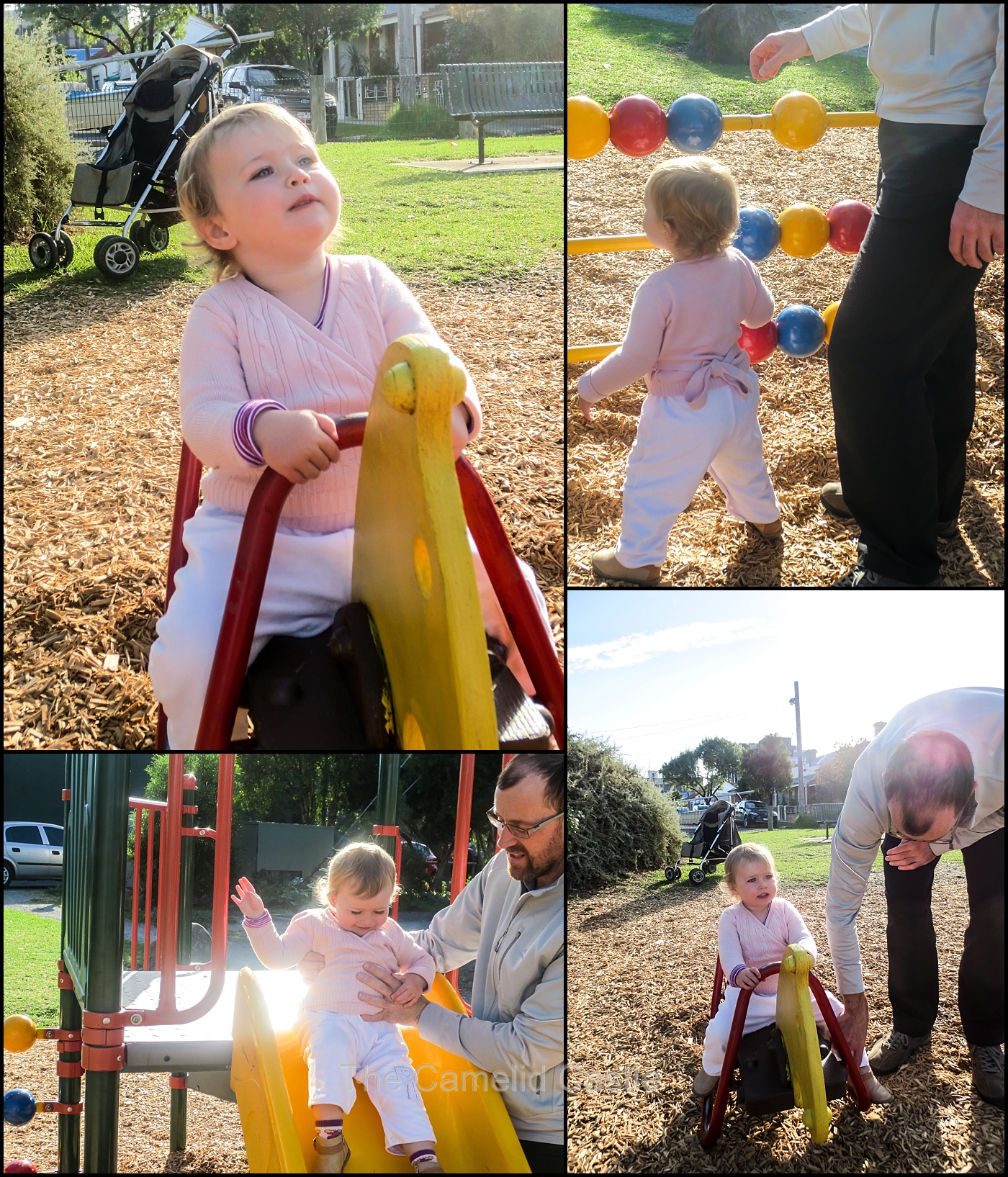 We eventually dragged her away from the park with the promise of another tram ride.  We definitely enjoyed our visit to St Ali North and will happily return next time we are in Melbourne! After a short tram ride we were back in our hotel in time to pack up and check out.  Our apartment had been a good place to reside for the past few days and we could easily have stayed longer.

After leaving our bags at the hotel we headed back towards the city and decided to get on the city circle tram for bit of sightseeing. Both Anto and I had done this previously but we thought Astrid might enjoy it and we planned to get on and off and show her the sights and take some photos. Sadly though every tram was packed. Not with tourists (of which there were a few) but mostly with students and business people who took advantage of the free service, but made it impossible to actually do any sightseeing.

After about 20 minutes and not seeing much we jumped off near a cake decorating/supply store we wanted to check out.  The store was extremely toddler unfriendly but full of great things. We grabbed a few things we could use for Astrid’s upcoming birthday party and headed back to the tram. Seeing yet another over full tram we decided to walk across the road to Flinders street station and catch the train back to Central.  In the meanwhile Astrid devoured a cheese sandwich as an early lunch.

Having given up on our sight seeing and having an hour or so until our bus pick up from the hotel we decided to wander Melbourne Central shopping centre and grab some refreshments.  We had walked through the shopping centre a few times over the weekend and still didn’t have time to check it out thoroughly.  We did stop for milkshakes/iced chocolates that Astrid was happy to participate in and then headed out on a nice walk back to the hotel.

Back at the IBIS we only had a short wait until our skybus turned up. It was now well into Astrid’s normal sleep time but she was not keen on napping on me during our bus transfers back to the airport. Of course the transfers were all too efficient and we made it to the airport in plenty of time for our flight but it gave us time to grab some late lunch in Qantas club and try and convince the toddler of the virtues of having a rest on the couches there before boarding the plane.

Sadly she didn’t take us up on our suggestions and instead sampled all the food on offer and chatted to everyone nearby.  Anto’s brother, Mikl, was meant to be collecting us from the airport at home but had been sent on an impromptu trip to Adelaide to work for the day. He was finishing early and we had been playing phone tag trying to figure out what flights he was on to see if we would end up being back around the same time.  We had figured out he was coming back through Melbourne but he didn’t appear before we had to board our plane. He only missed us by a matter of 20 minutes though it seems.

The flight back was much more full than the way up and we didn’t get a spare seat. Astrid was getting rapidly grumpy from not having slept but we did manage to distract her with food, magazines and general chatting.  Luckily our flight was extremely quick and we even landed early.  We then figured out that Mikl was likely on the flight behind ours so figured we had better wait for him to stop another cross town drive to pick him up only 40 minutes later.

Astrid was well and truly ready to go home but was distracted by her Grandpa who had come to pick us up and riding on Anto’s shoulders around the airport.  Just after 5pm Mikl had arrived and we headed home, not a quick trip in peak hour and with road work, but it is Canberra and nothing every really takes that long.

Once home Astrid was keen for some dinner and a bath as she was exhausted after a few really long days. She did tell everyone how much she enjoyed ‘Melb’ and was looking forward to going back. For the last week all we have heard is ‘go back to the hotel now’……..  We are trying to convince her that we will be going to another hotel in a few weeks, but the next one will be in Fiji!!

……. and no I didn’t forget to add the photos from the days adventures. I was obviously photoed out as I only took the few from the playground that day! Still plenty of good ones from the trip though.