Our dreams of a decent nights sleep were shattered when Soren decided 4.30am was a good time to commence the day. Apparently we hadn’t fooled his body clock! He wasn’t hungry he just wanted to play! He managed to wake Astrid up, who then refused to go back to sleep, despite acknowledging it was the middle of the night and she was tired.  I eventually got Soren back to sleep in our bed and then Astrid woke him up again. Deciding we weren’t going to win, I gave up and fed Soren and we headed down to breakfast, not impressed at the lack of sleep……….

Astrid managed to eat quite a bit more breakfast this morning and Soren desperately tried to steal everybody’s and was somewhat annoyed he wasn’t allowed to have it.  The coffee was still average, but it provided caffeine so it would have to do.

We had planned on a walk to the nearby beach for Astrid to have a play, since she is a lover of beaches and she didn’t get to play on any of them ones we kept seeing on the weekend, in Sydney and Wollongong.  We figured it was only a couple of blocks away so it wasn’t too far for her to walk and it wasn’t yet ridiculously hot.  We walked past some different shops, many of which contained interesting food providers, and another shopping centre, both of which we figured were worth checking out later.

We hadn’t bothered taking Astrid’s swimmers since we weren’t sure the water was all that warm and we didn’t have any beach towels with us.  Turns out the water was quite warm but Astrid was happy to play in the sand while Soren had his nap in the sling.  It’s a very typical Singaporean vista when you are playing at the beach with many ships on the horizon. 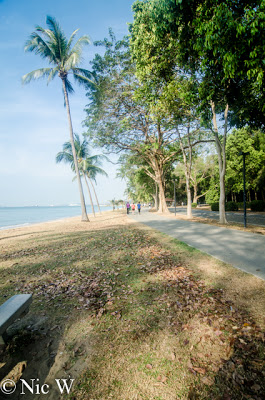 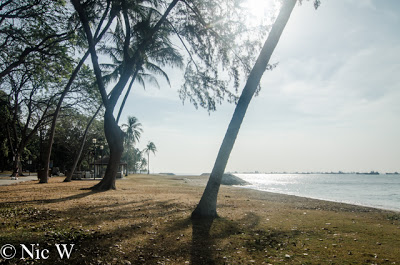 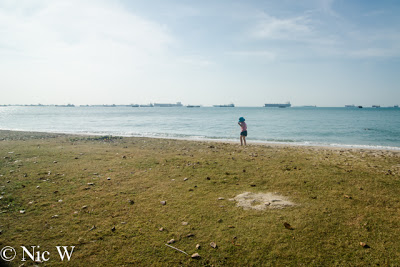 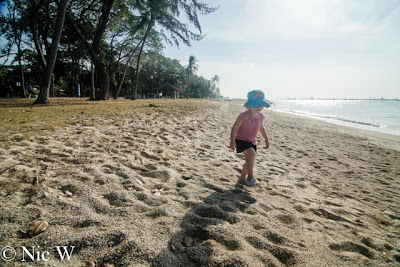 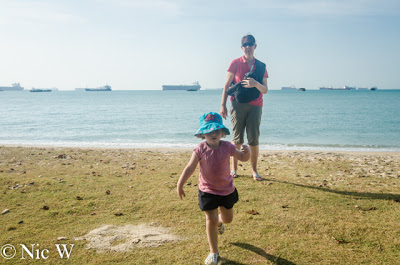 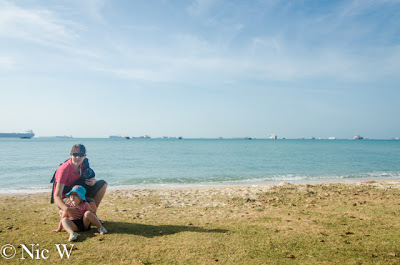 Astrid had a wonderful time moving sand one handful at a time from the beach to the grassed area, and the water got too tempting and she went in, clothes and all.  Due to tiredness there were quite a few tantrums, so we had to designate a ‘tantrum tree’ for her to go and tantrum under and eventually we had to drag her away as it was all getting a bit much. She did look pretty cute playing on the beach though……. lucky she is cute! 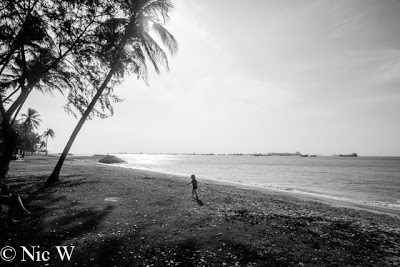 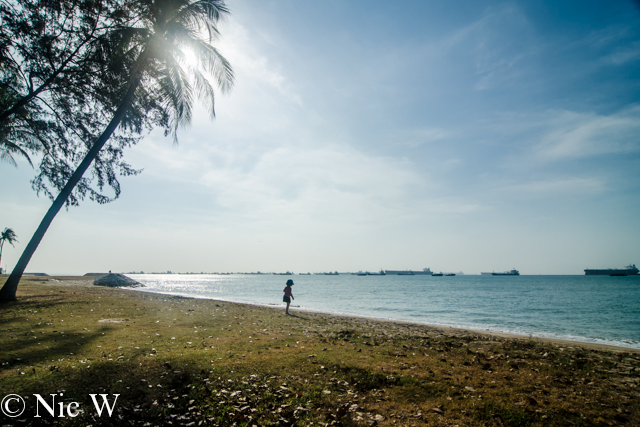 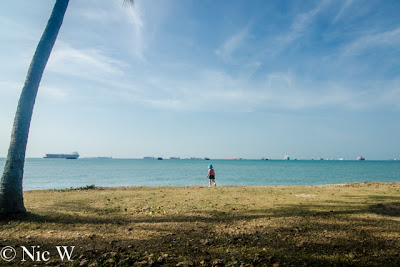 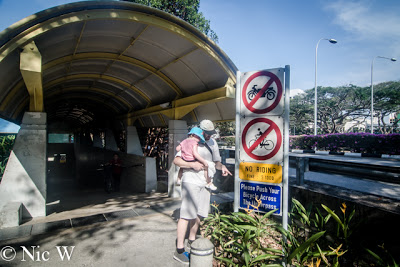 We walked back via the exceptionally clean underpasses and dropped by the local market to pick up our now significantly better smelling (and cleaner) washing and headed back to the hotel.  All a bit weary it we opted for another afternoon nap, but this time I managed to wake everyone up by 2.30pm so Anto and Astrid headed across the road to obtain more pork and rice (this time as takeaway) and a bucket for Astrid to play with, and I fed Soren. I was feeling a little dodgy so skipped lunch.  Turns out that was a wise move. 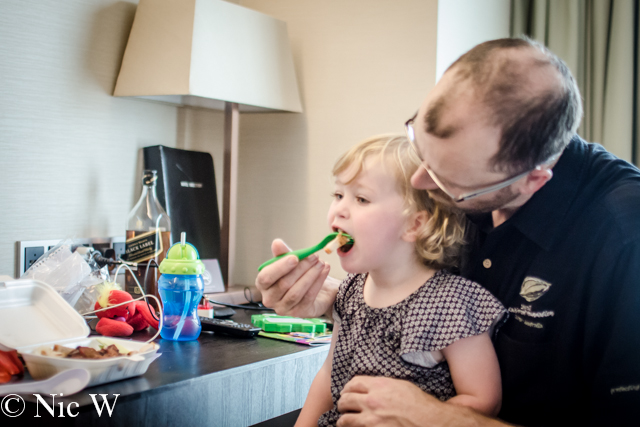 It was quite hot and we had plenty of time to go and visit the hotel pool.   We had 2 free ‘welcome’ drink tickets for the hotel bar so I got a glass of wine and Anto a beer. 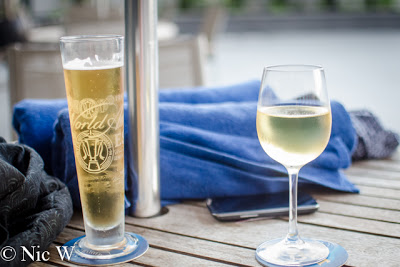 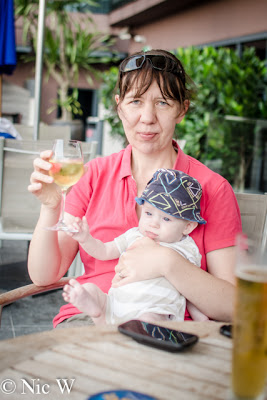 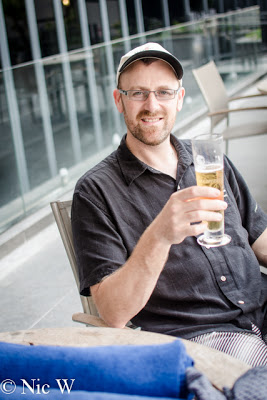 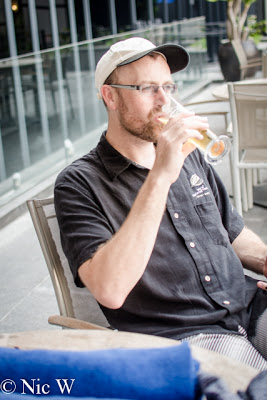 Astrid and Anto played in the pool with her bucket and Soren and I watched them in the warm afternoon sun (haze). 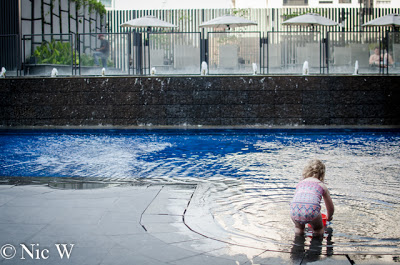 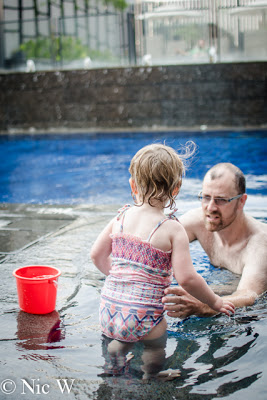 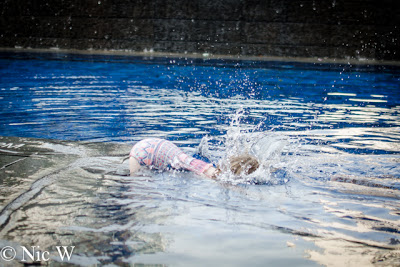 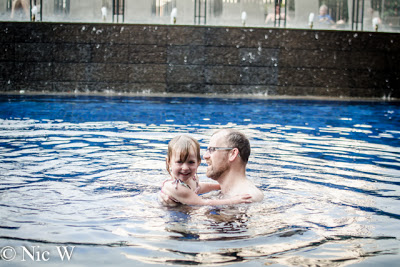 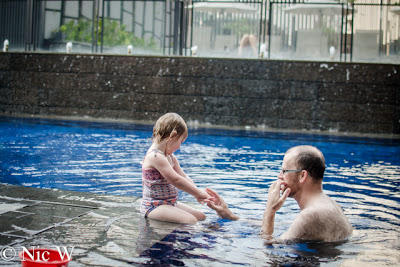 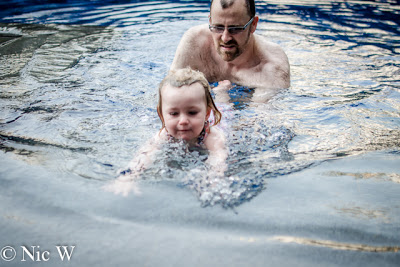 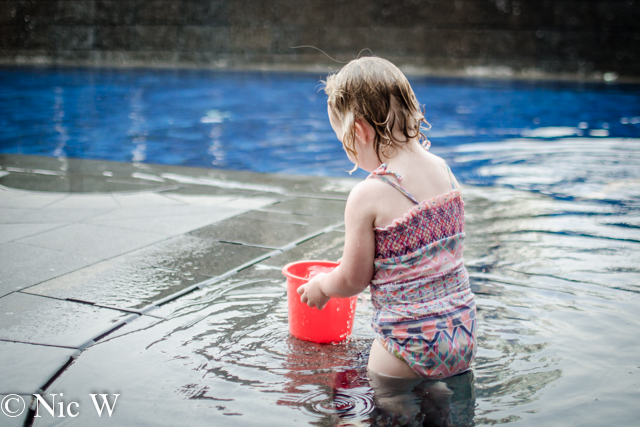 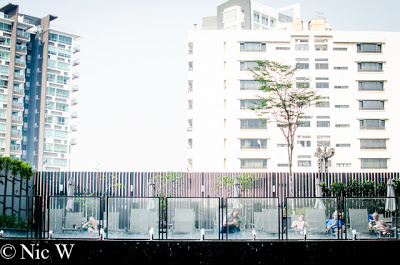 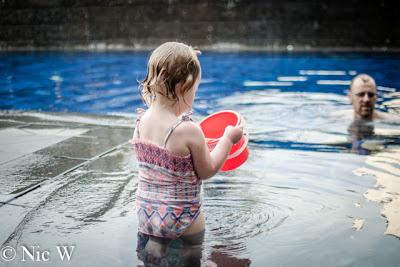 After a swim, Soren needed a nap so we popped him in the ergo and headed over to the Parkway Parade shopping centre directly opposite our hotel for a look around and dinner.  It was another huge shopping centre and we had a wander but I was starting to feel really unwell and it was getting late so we found a food court and had some dinner. Tonight Anto had some char kway teow, which turned out to be a bit spicy for Astrid and I had some vegie fried rice, which was tasty enough but not amenable to my stomach. Luckily Astrid enjoyed a fair portion of it.  Feeling more and more unwell we made it back to our room just in time for me to worship the porcelain goddess. Thank you Astrid for sharing your delightful virus! 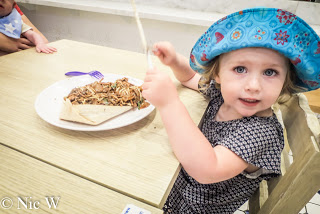 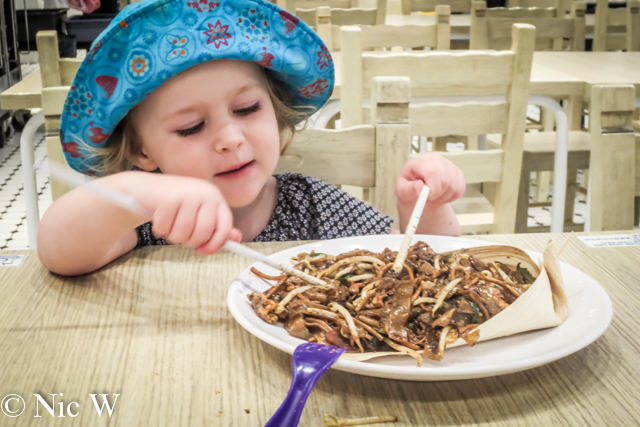 The kids were eventually asleep and I was hoping for a quick recovery for our planned out to the bird park the next morning.