March 8, 2015October 27, 2017 • Blog In
There has been a definite lack of blog posting of late. In fact there has been a lack of most things getting done around the house.  Astrid has been going to preschool 5 days a fortnight for the past month, and I would have thought that would leave me with quite a few extra hours a week where I could get stuff done. Unfortunately, between getting Miss procrastinator ready for preschool each morning and the walk there and back (sometimes multiple times to retrieve forgotten hats), there isn’t that much Astrid free time.  Master Søren has also been unwell for pretty much the whole last month….

Søren Augustus, proud owner of 6 teeth for the past several months, decided to go the whole hog and try and grow 8 more in one go!  I don’t make good teethers it would appear. Astrid was always awful at teething and Søren has not improved on his sisters record.

Most of February was spent putting up with a cranky baby who spent most of the day miserable and crying. Søren is normally such a happy baby, and he has been plain miserable. His whole mouth and face are swollen, he has bleeding gums and he is justifiably annoyed at the world.  Life is tough at 16 months.
This is what a fair proportion of each day has looked like……..

Not my usual happy little chappy.  With all the teeth coming through (slowly, so very, very slowly), we just hoped the teething misery would pass and things would go back to normal.  Aside from the all day misery, the nights were getting worse.  Screaming for hours on end and refusing to sleep anywhere other than on me.  Every day was more red cheeks, swollen gums and his little hand poking at his mouth.

A couple of weeks ago it was at the point of ridiculousness and I was sick of the non-stop screaming, non-sleeping and misery. Anto was away interstate for work and I think I spent the entire time he was away with a baby strapped to me in the ergo or laying on my chest sobbing. I took him to the doctor, just in case something else was wrong, and sure enough he had ear infections in both ears.  Some antibiotics, some better pain meds and things looked up for a few days.  He actually slept in his cot for at least a few hours a night (there might have been a whole night in there somewhere), and the days were better too. Some smiles, some playing and he even started talking again.

The teeth were obviously still bothering him, but it was more periods of unhappiness than the all out full scale misery of the past few weeks.  Of course Astrid picked those few days to come home from preschool with a nasty virus that made her truly miserable for about a week.  This is what an extremely over-tired and sick three year old looks like……..

An Astrid ear infection and chest infection was the result. A whole heap of antibiotics later and some rest and she was on the mend within a week.  Of course the rest of us all went down with the same virus. After being happy for about 1.5 days Søren was again sick.  We had several days of him stuck to me like glue.  There were lots of very long walks in the pram or with the ergo so he could nap on me. 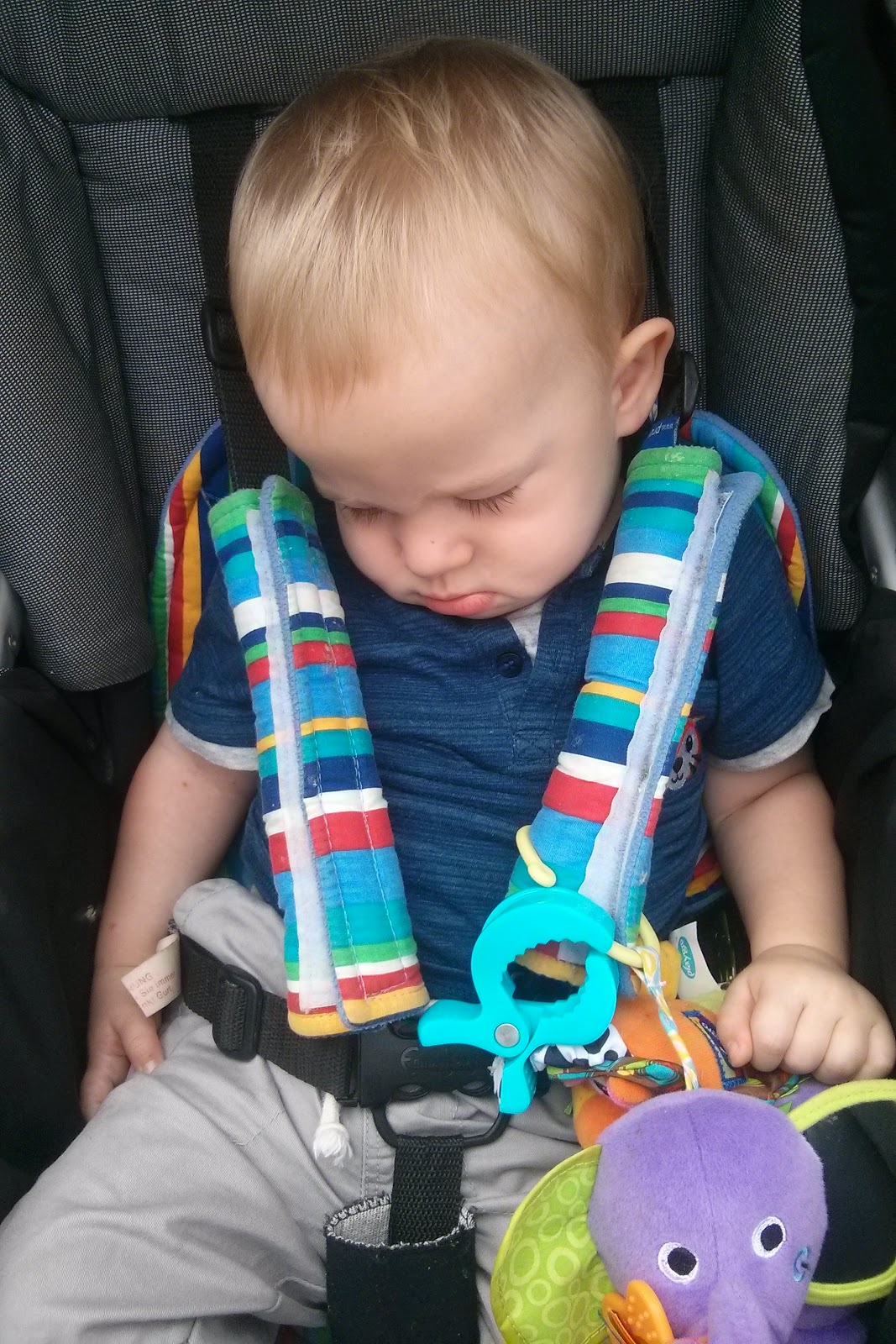 Apparently napping in your cot is not preferred when you are a sick Søren  At night the teeth and chest were bothering him and most nights he would wake screaming at some point and end up in the portacot sleeping next to us.

Come last Monday we knew Søren was very sick when he slept in (in the portacot, mind you) until almost 9am and then refused to do anything other than lay on me.  Lucky his big sister was also happy to give him big get well cuddles.

The rest of the morning was spent with a Søren sleeping on me until we could take him to yet another doctors appointment.  It seemed that poor Master Søren had also managed to get his sisters virus and another ear and chest infection.  More antibiotics and a big day of sleeping only on Mum……

Luckily big sister was visiting Grandma and Grandpa for the day, so I had plenty of time to sit on the couch or bed with a snoozing baby.  I got nothing done, but at least he was cute (and quiet!).  You know he is sick when he stops moving and stops eating.

Of course, one of the joys of parenting is that they give you all their germs.  It’s inevitable when you get sneezed and coughed on all day, and given unlimited snotty kisses, that you end up sick.  Anto and I spent the whole week also very sick and looking after sick kids.  Astrid is now mostly better, but Søren is still not all that happy.  He is almost over the latest virus but the teeth are taking their sweet time.  All we can say is lucky they are cute!!!!