I posted about how we celebrated Søren’s actual birthday the other day. The weekend after his birthday it was time for his party!  The week was spent madly baking, icing and decorating and I was up late every night up to my elbows in icing thinking I should have left it at cupcakes at the park.  Of course it all worked out beautifully and everyone seemed to have a good time (and plenty of food), so I’m sure there will be another ridiculous party idea for next year…..

I had a few different ideas for themes this year but settled on ‘under the sea’ since Søren currently loves sea creatures. He calls fish ‘bish’ and octopuses ‘oct-duss’.  It seemed like a nice fun theme that he would enjoy. It was also colourful and easy to come up with a million ideas for….  Probably too many ideas (as usual!).  Luckily Antony is very good humoured about carrying out my ridiculous requests.  When asked to carve a watermelon into a shark and make octodogs (octopus frankfurts) he just nods, smiles and gets on with it.  I must say that the watermelon shark and octodogs were superbly executed and he did an awesome job on the cake icing and constructing.

I went with a blue, purple and green theme to suit the underwater vibe and pretty much anything sea creature.  Aside from Antony’s excellent direction following, I also had lots of help from family and friends.  Thanks to Michael (aka Uncle Mikl) who helped with the fondant cake toppers and cake decorating.  Lorraine and Trevor (aka Grandma and Grandpa) who filled the croissants we turned into crabs and helped make the capsicum octopus and crabs for the dips. Di (aka Granny) who made dips for us. My friend Jade who made the gorgeous fish cake pops, and my friend Rachelle from Easy Invitations who did all the printables for the party (including the ‘pin the tail on the whale’).

Søren adored his cake and couldn’t wait to get into it!  it came out pretty well for cake decorating amateurs and definitely looked very ‘under the sea’…………..

Under the Sea – all things sea creatures, and blue, purple, green.  We had whales, fish, octopuses, crabs, clams, seahorses and starfish everywhere….. 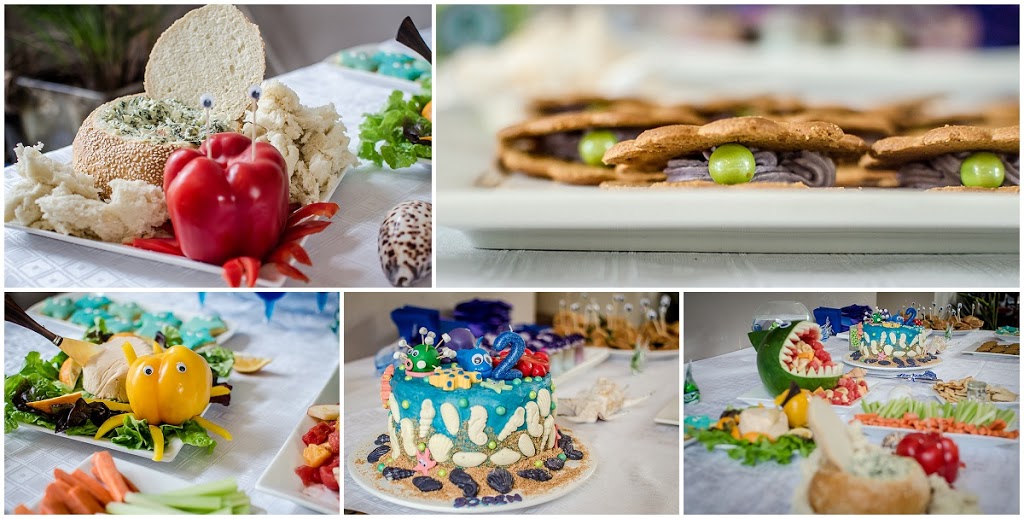 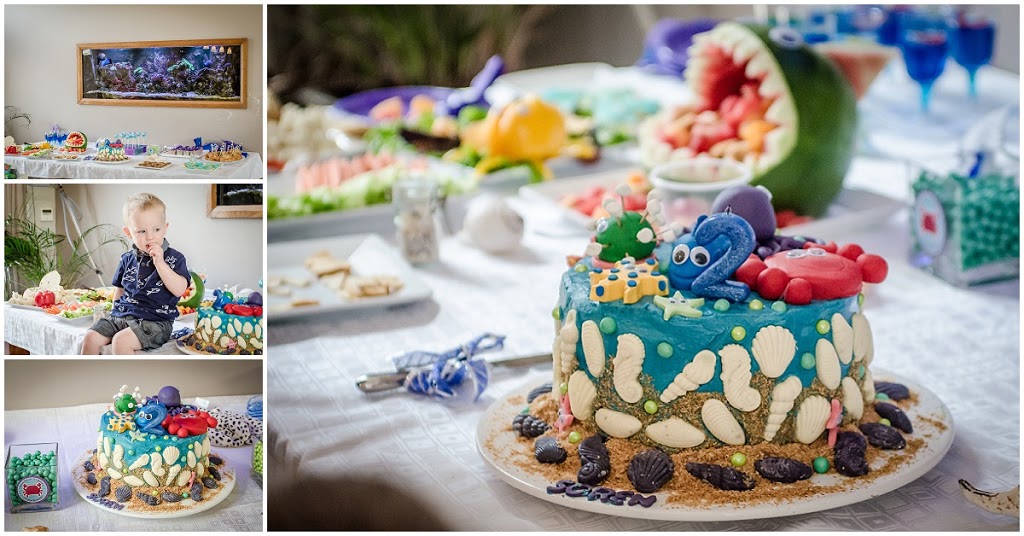 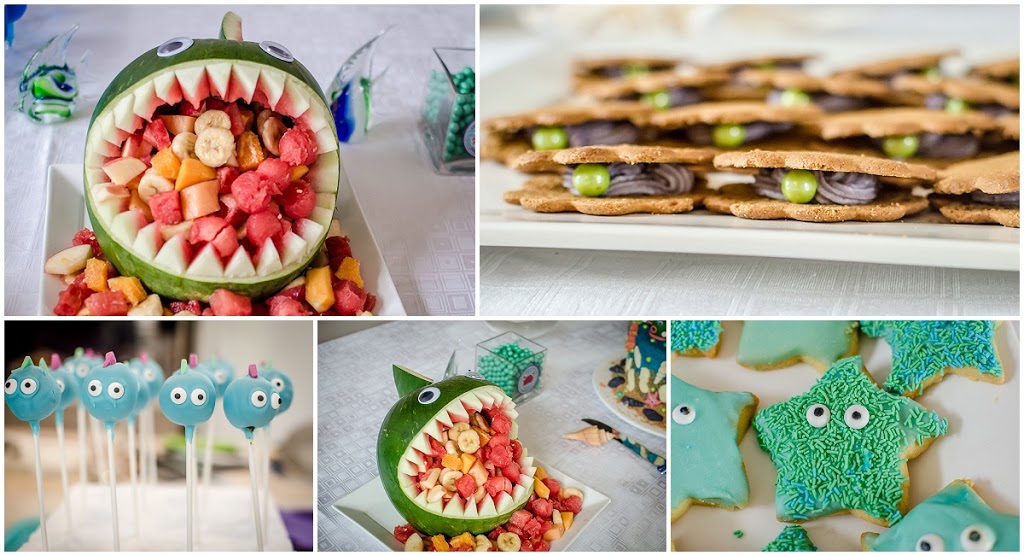 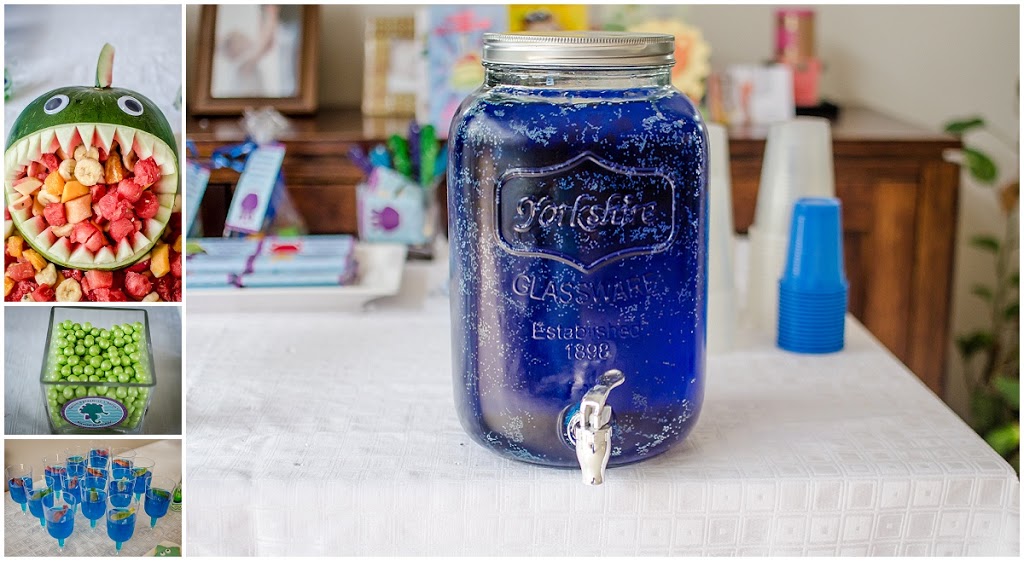 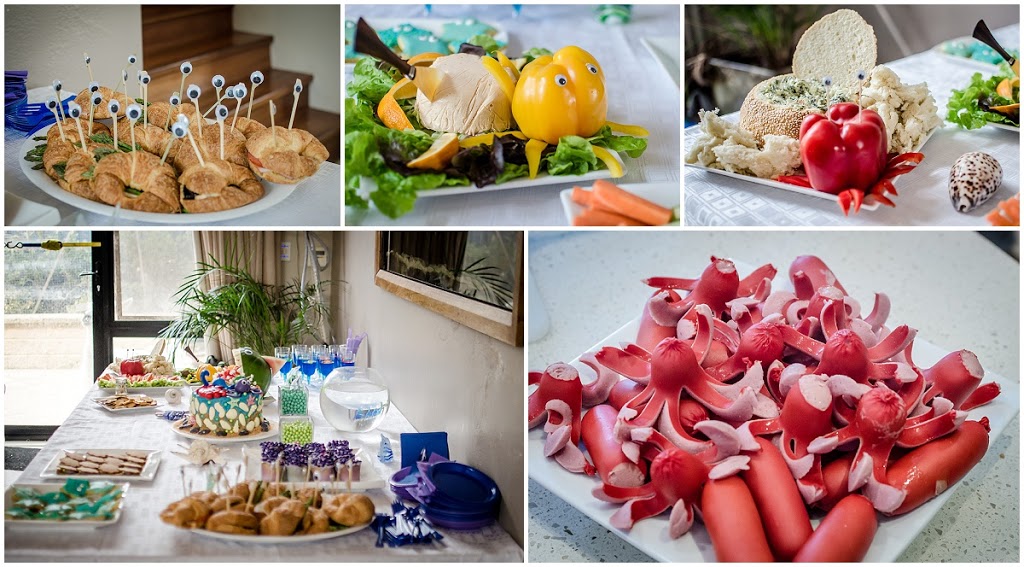 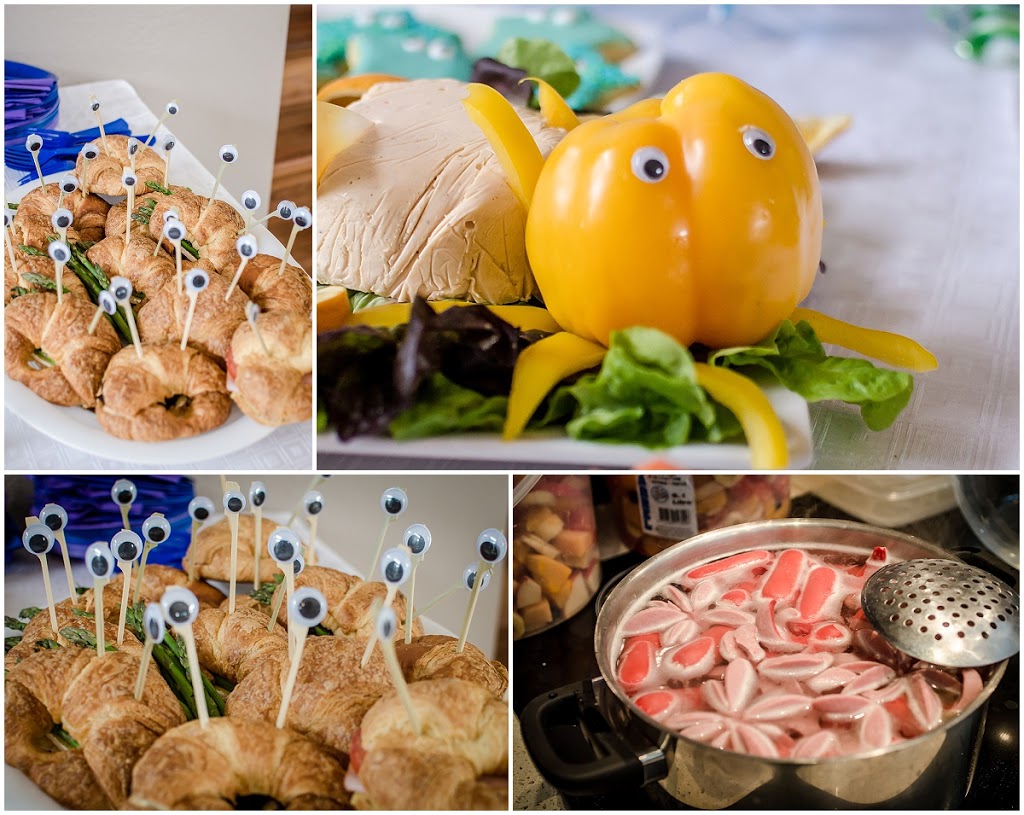 A week before the party, we started making fondant sea creature toppers and decorations for the cake.  We made a whale, an octopus, a crab, an anemone and lots of starfish – big, small and spotty.  We also made purple and white chocolate sea shells to decorate the cake with.

The cake was a triple layer vanilla buttercake, iced with mint flavoured buttercream. It was covered in ‘sand’ (toasted coconut) and decorated with the sea creatures, chocolate shells and seahorses and chocolate pearls. 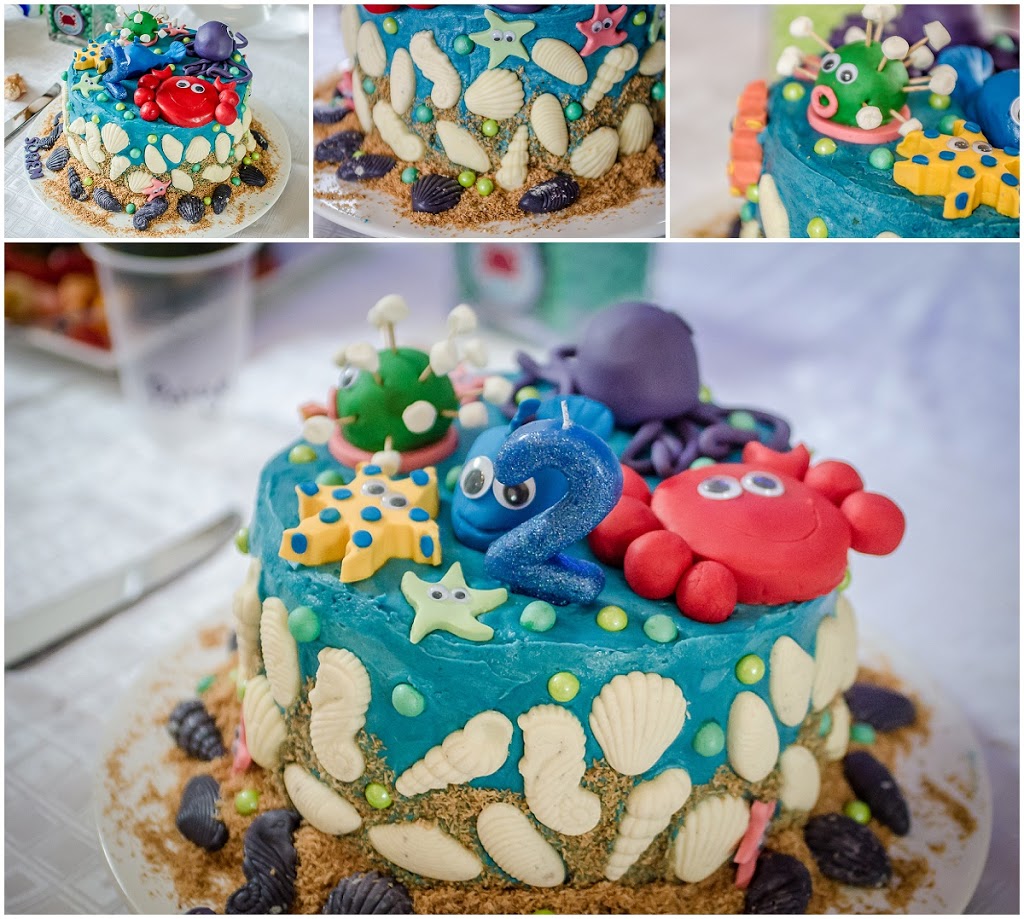 Given we have a 6 foot marine tank in our kitchen-family room area, I though that might just do as a back-drop for the party table!  The resident clown fish, tangs and wrasses were more than happy to say hello to guests.

I decorated the party table and drinks table with shells, glass fish and some of the sea creature stuffed toys we have amassed like a spotted ray, turtle, shark and seal. I didn’t actually manage to get any decent photos of all the table adornments but they did look cute.

We also made up a few octopus lanterns to add to the sea theme and Astrid and Søren had insisted on a bunch of green, blue and purple balloons scattered about. 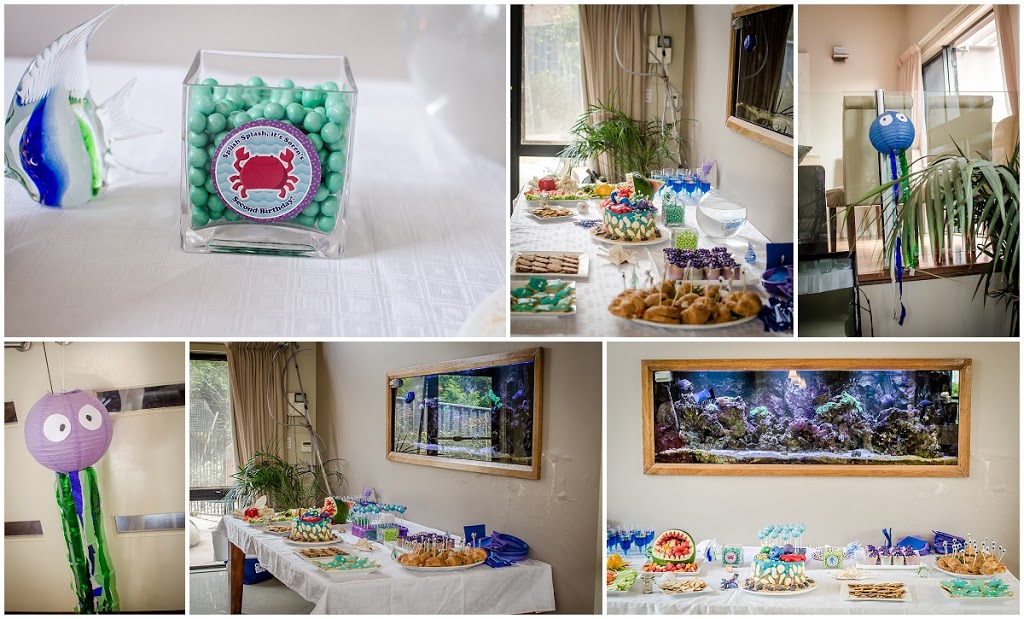 Thank you gifts and prizes

The top three places for ‘pin the tale on the whale’ got a packet filled with a combination of a sea creature craft pack, sea creature stickers and bubbles. 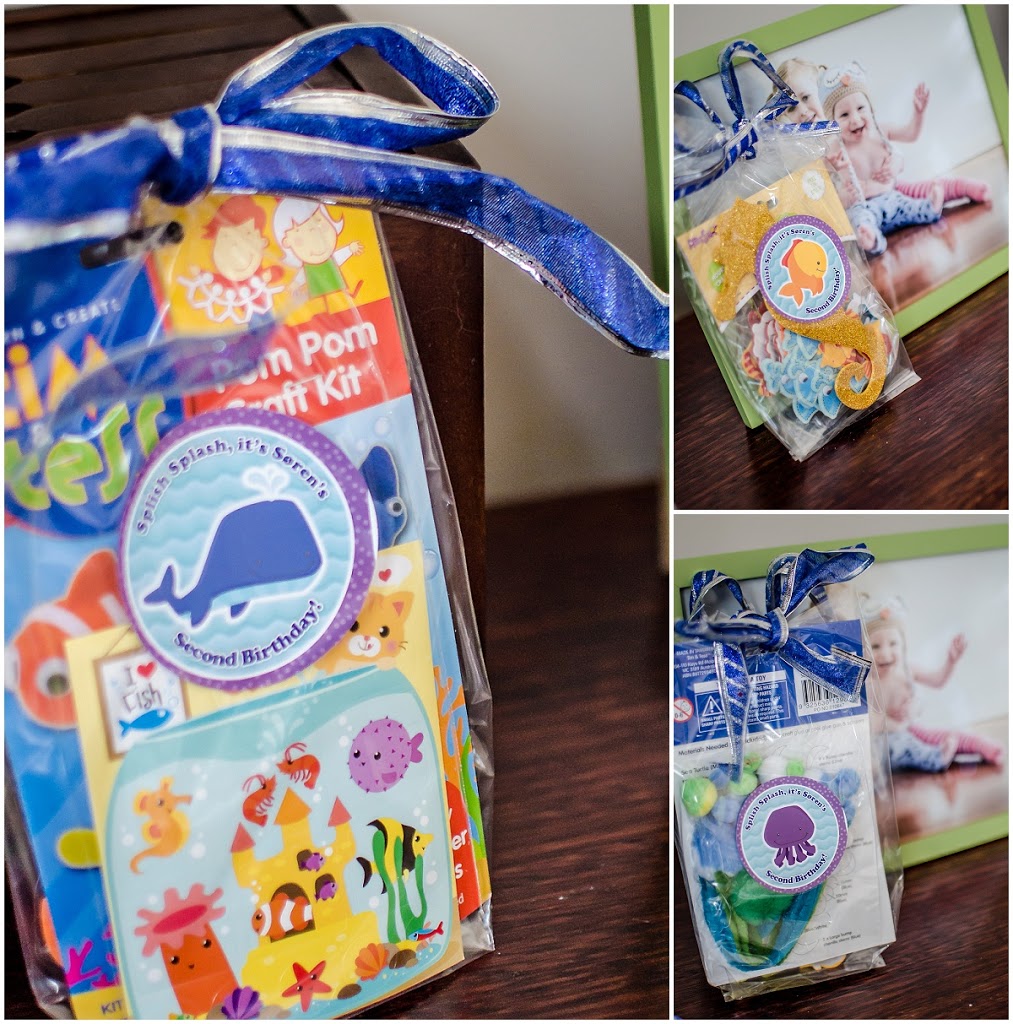 For the kids to take home, I made up packets of ‘fish in the sea’. Blue jelly beans with jelly fish swimming in them. They were finished off with one of the sea creature stickers.  The bigger kids also got a coral stick to take home. These were huge hits and I apologise to all the parents for giving your kids sugar on a stick, even if it was pretty sugar on a stick! The babies got a pack of sea creature stickers and bubbles for their favour.

The adults didn’t miss out and got their own chocolate to take home with the very cute sea creature labels. 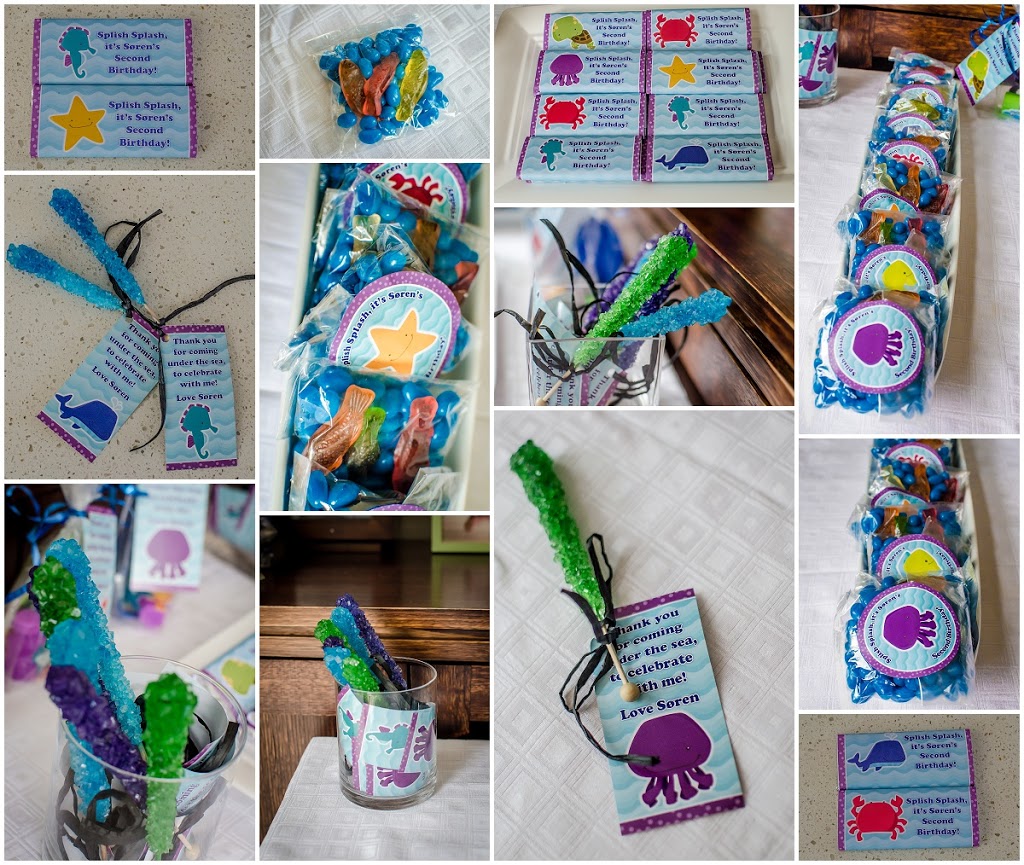 Good old ‘pass the parcel’ is always a favourite with the kids.  The prizes inside each layer were either a skipping rope or some bubbles and a sheet of ocean themed stickers. They seemed a hit with the kids of all ages. It’s always hard to come up with something that suits different age groups and both boys and girls.   The parcel winner got a nifty bubble set.

As usual not all the kids were sure about when to pass the parcel and when to hold on, but we got there in the end.  Søren was quite excited to open a layer but was confused about why he didn’t get to do it every go around. 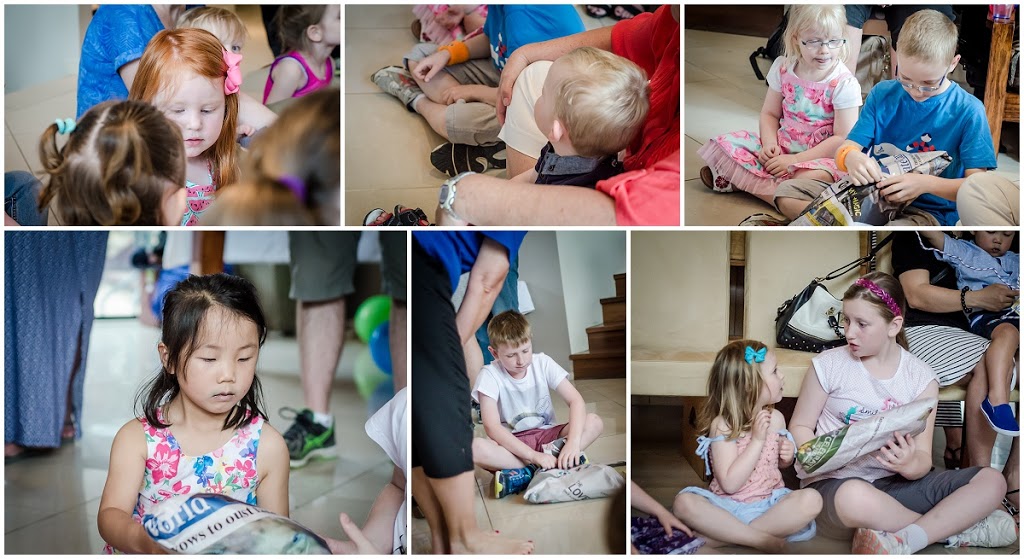 Pin the tail on the whale

Getting into the ‘under the sea’ theme, we played ‘pin the tail on the whale’.  I was reliably informed by some of the older kids that given Søren’s birthday whale already had a tail, it was going to be pretty easy for them to get their tails in the right spot! A blind fold and spin by Anto later, and they changed their tune.  The whale ended up with a lot of tails and some of them were even pretty close…
Soren thoroughly enjoyed his first go at the game, and it was a pretty credible effort for a 2 year old.

With the games done and dusted it was time for cake!  Søren obviously enjoyed his games as he kept pointing outside and asking for more ‘parcel’ and ‘whale’ but he was more than happy to participate in his favourite birthday activity – blowing out the candles and getting stuck into the cake!

It was a bit of a shame to have to partially dismantle the cake that it felt like we had only just put together, but 50-odd people needed cake, and my waist-line didn’t need too much of it laying around the house.

It turns out the cake was pretty tasty!  But lets face it, most kids like cake….Astrid was really disappointed that I wasn’t going to let her eat the fondant toppers but she made do with buttercake loaded with buttercream icing and covered in chocolate. Søren wasn’t disappointed either.

So you know that ‘ocean water’ that we served everyone? Well it turns out that it resulted in everyone who drank it ending up with a really blue tongue!  Something the kids (and adults) reveled in. If it wasn’t blue tongues from the lemonade then it was blue faces from the blue cake icing and blue chocolate on the fish pops…….  there was blue everywhere! 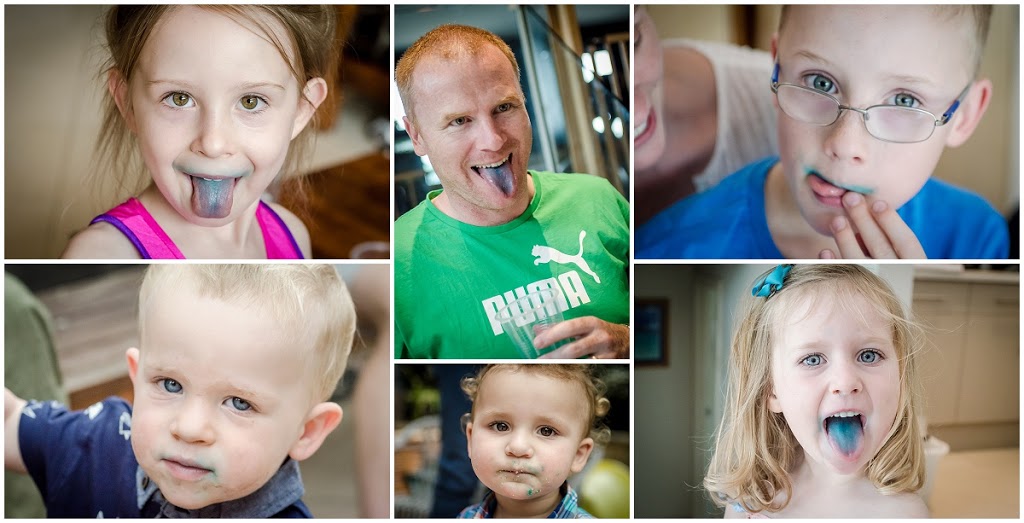 Although we left most of the present opening until after Soren’s nap, his friend Sophie really wanted to see him open her present (like all little kids) so open it he did.  He was absolutely thrilled to bits with his crocodile bubble machine…..  it’s still a hit a week later 🙂

Astrid & Søren certainly both enjoyed themselves thoroughly.  Astrid was as happy as a pig in mud or at least a 4 year old surrounded by cake, lemonade and blue icing!  Søren was a little shy and wary of so many people but thawed out and got stuck into the food, games and presents, and those fish cake pops (he loves a good cake pop!). 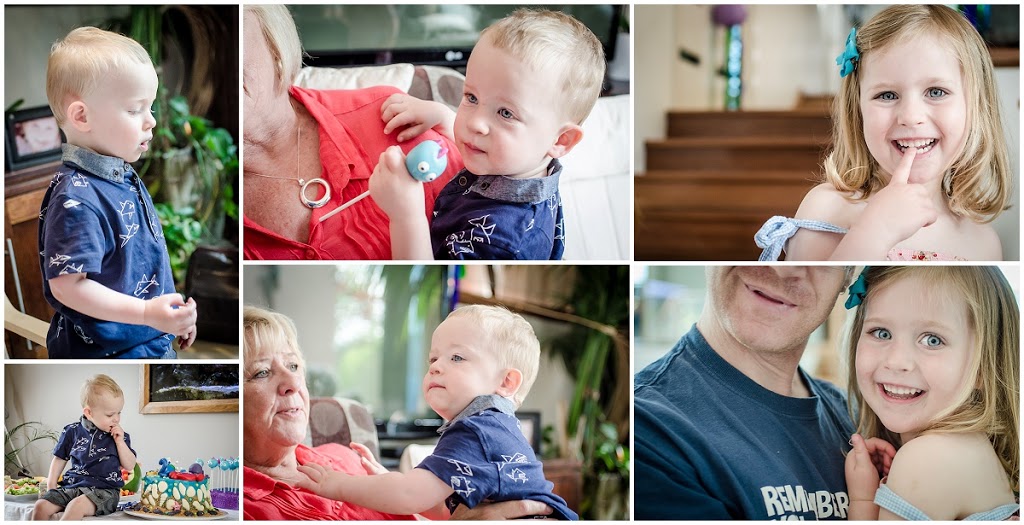 It wasn’t just Astrid and Søren who had a good time eating, drinking and playing. I spied plenty of other happy kids and adults.  A fair whack of the food got consumed and even the ocean water tank was looking on the empty side, so no one went home hungry or thirsty. I did have to offload cupcakes and birthday cake to anyone who didn’t look stuffed to the gills but most people seemed to be well and truly on a sugar high. 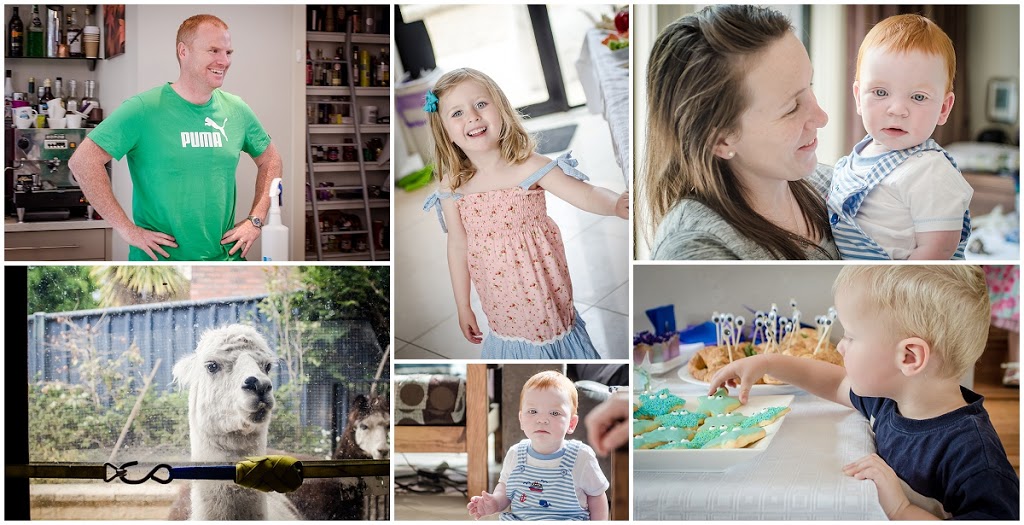 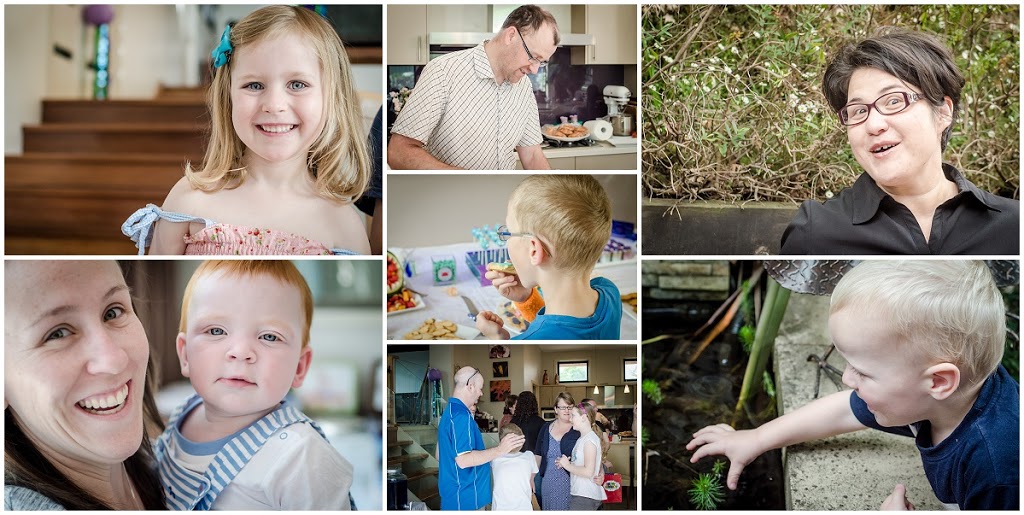 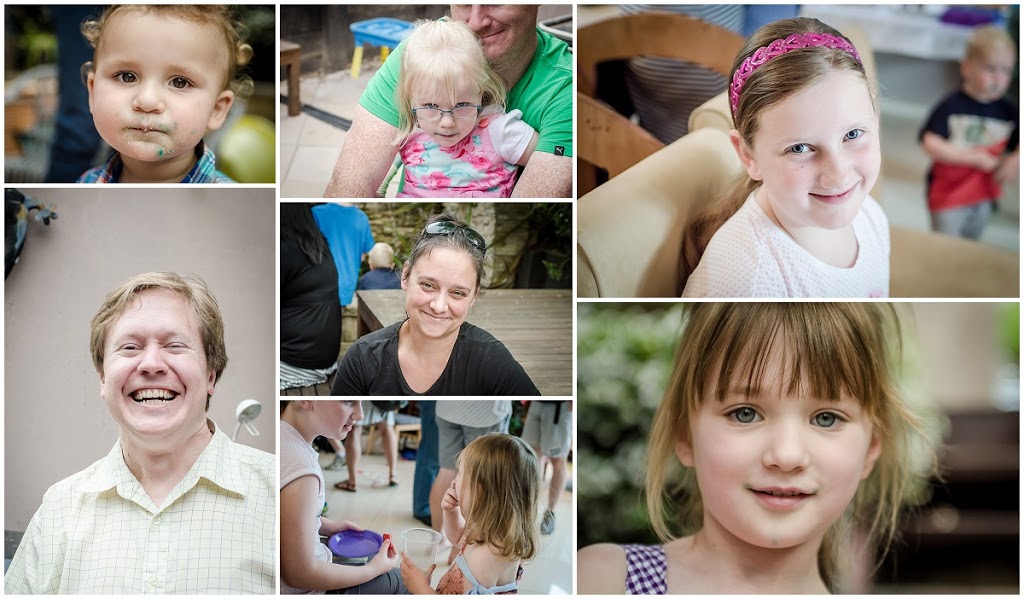 Even though I was running around like a headless chook organising food, games and taking photos, I got the odd cuddle with Søren.  Søren had more than enough willing friends and family to provide him food and cuddles, much to his delight. He is not currently fond of having photos with me, but is always happy to pose for photos cuddling his dad. He does love me I swear! 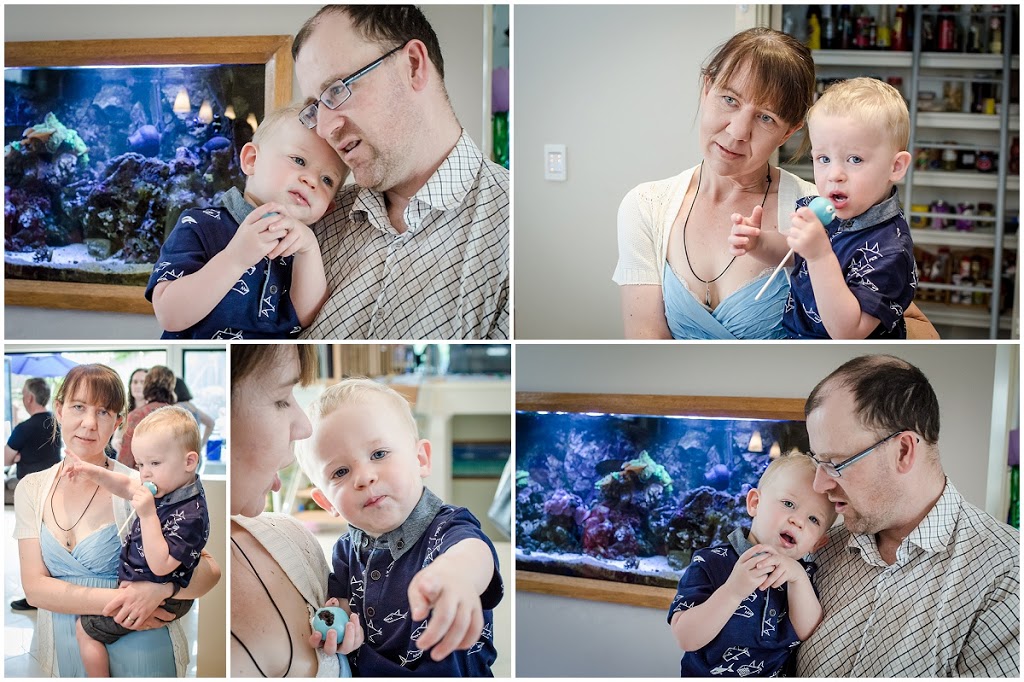 Once most of the guests had left, we dragged Søren away from the food and his bubble machine and convinced him if he had his nap he could open up all his presents when he woke up.  It was now an hour past his normal nap time, so while he wasn’t enamoured with my plan he did agree to it, mostly due to exhaustion.

While Søren was napping Anto and I had time to actually chat to our friends and relax a little. My lovely friend, Petti, had driven down from Sydney for the day, so it was great to have more time to chat with her. She also spoilt Miss Astrid by bringing her a present – a marble race track. Astrid and her friend Charlotte amused themselves during Søren’s nap with Astrid’s new game and the crystal sticks….. 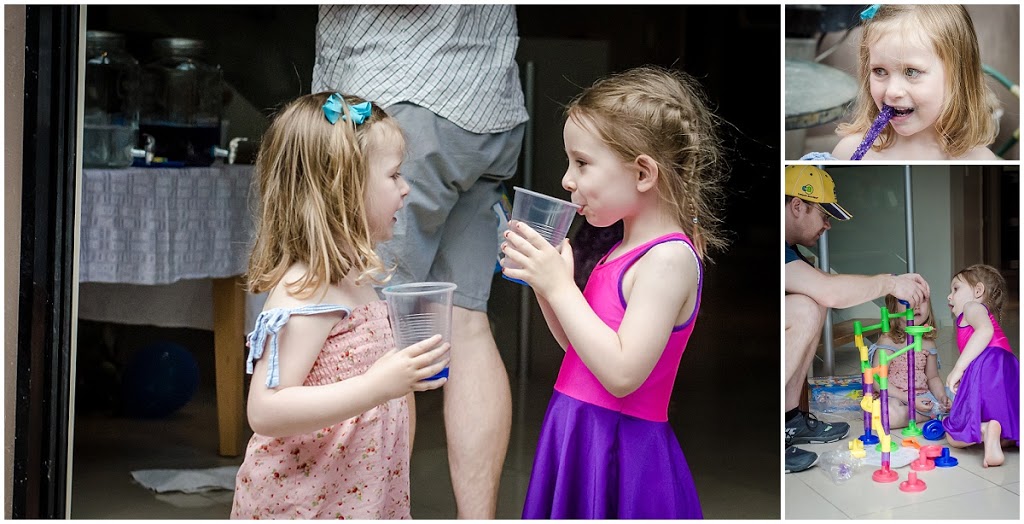 Once Søren was up from his nap, we had to uphold our end of the bargain and let him loose on his pile of presents.  After all his practice from his birthday, Søren is now a present unwrapping pro.  We did spread them out over the whole afternoon – open a couple of presents, have a play and repeat.  All while his tired parents quelled some of our sugar overload (and late night cake icing tiredness) with coffee.  Astrid was more than happy to give all the gifts her personal inspection too! Søren was thoroughly spoilt by friends and family.  He received an amazing selection of gifts and has enjoyed playing with them all week long…… 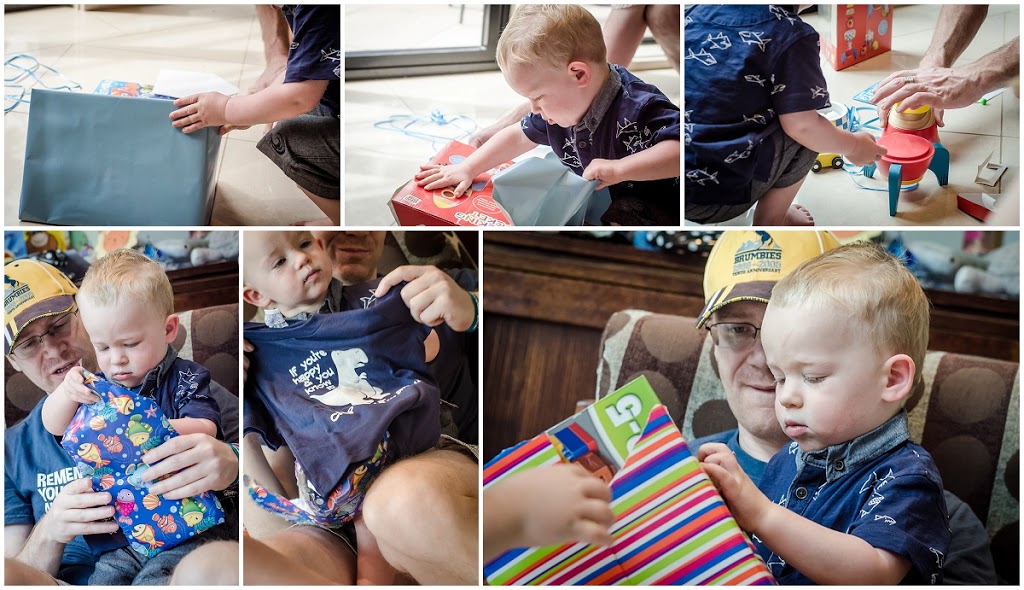 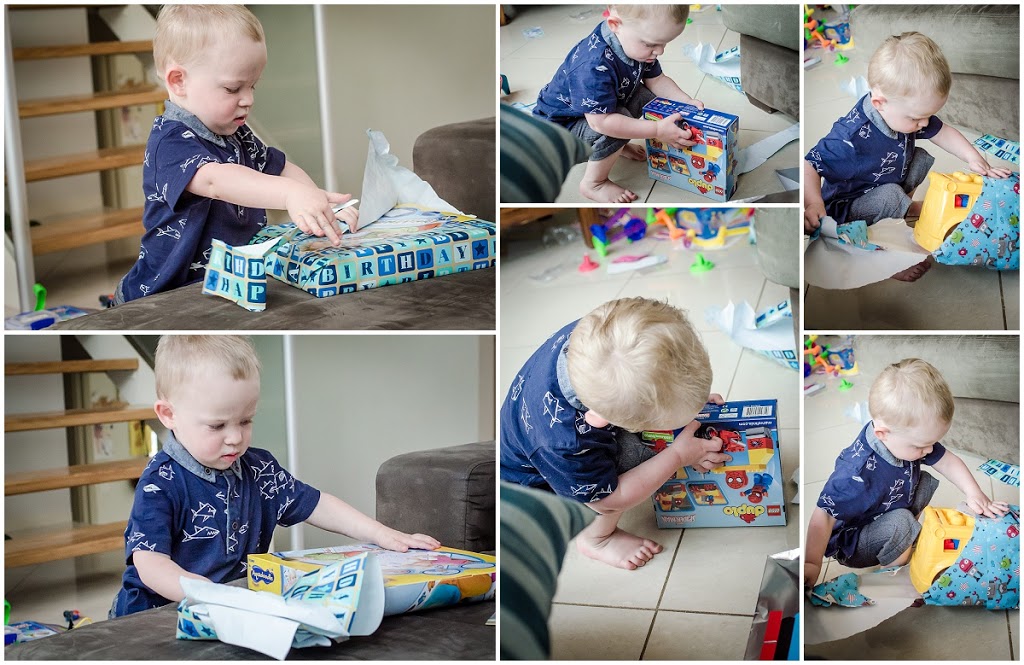 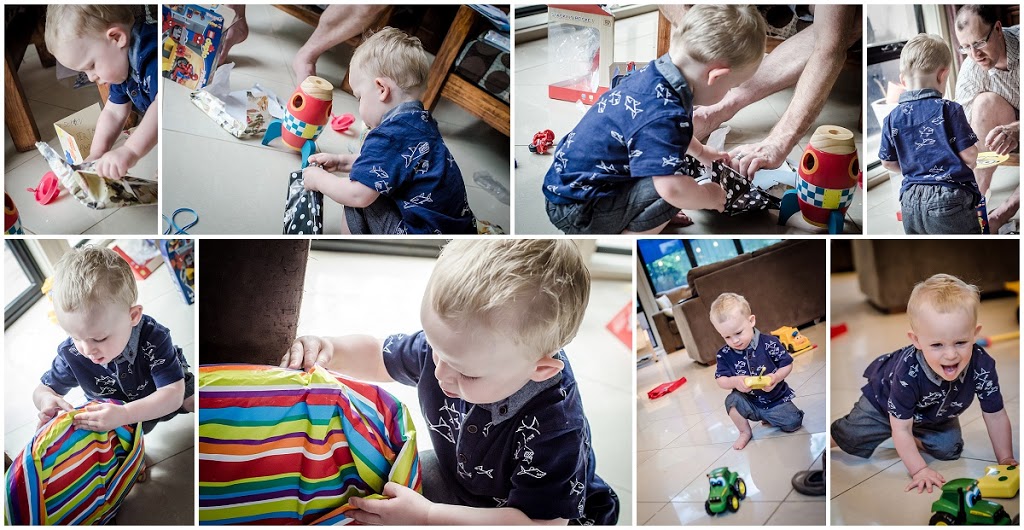 It was a big day of fun, food and presents.  We definitely all slept well that night!  Thank you to everyone who helped Søren celebrate his second birthday.  We hope you had as much fun as we did!