We had a 5 and a half hour tilt train ride from Copenhagen to Stockholm (which involved quite a lot of pastry eating and coffee drinking) then a dark and wet afternoon exploring Stockholm. Lucky there are lots of lights! Post by both Nic and Anto!

Everyone was seemingly up earlier than necessary for our departure to Stockholm. We efficiently packed up our belongings and snow-suited up the kids for the walk down to the train station with all the luggage. The now familiar 600m walk was far easier without luggage but did seem less painless than when we did it in the opposite direction on arrival after 33 hours of travel and little sleep! Astrid enjoyed being in her warm suit as it was a wet and cold morning. 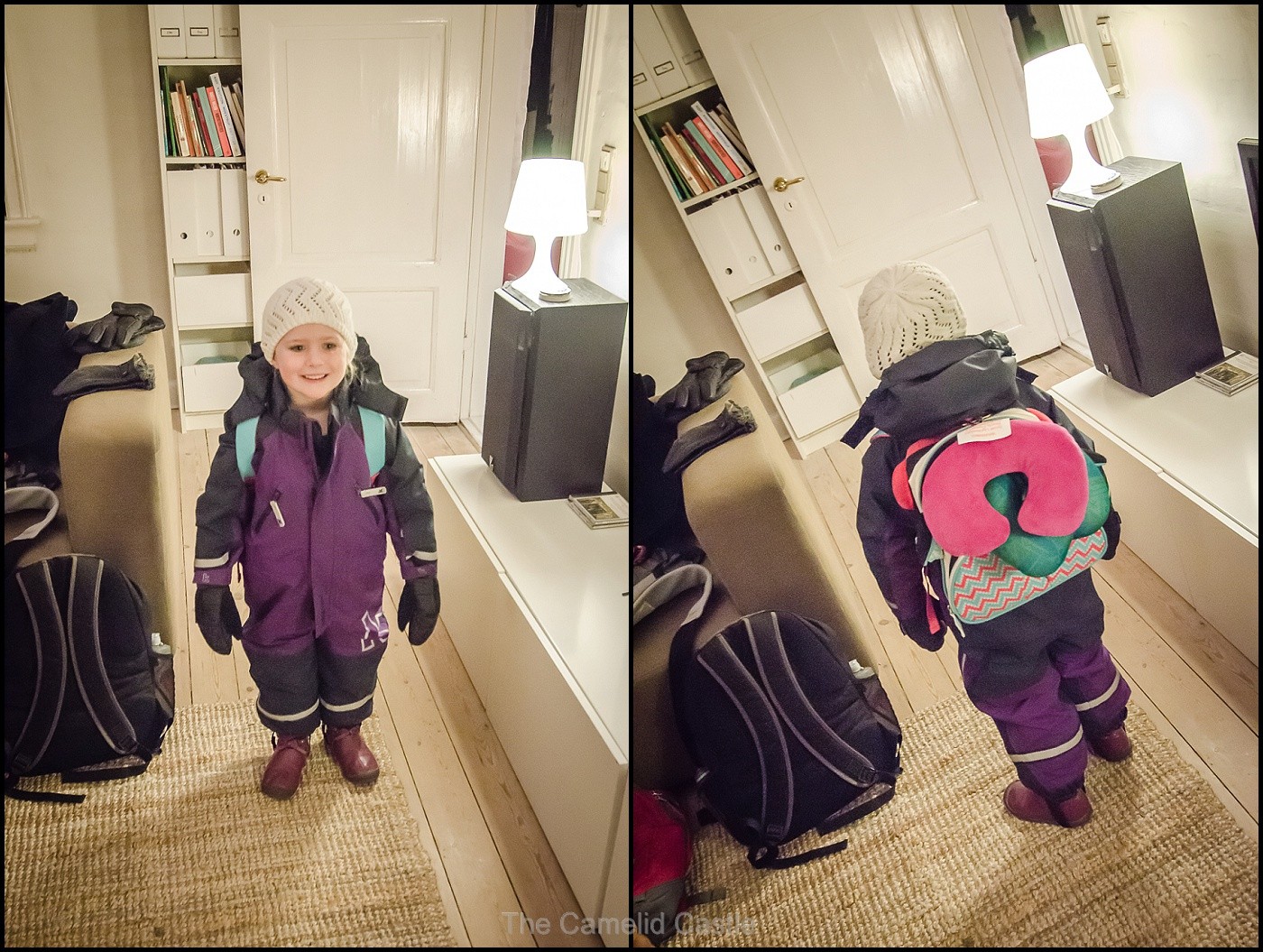 As is usually the case, the process of catching the train was pretty painless, as we were running quite ahead of time we deposited the kids on the platform with a couple of minders (Nic and Alan) while we went off to forage for train supplies. Fairly quickly we had acquired some bakery treats, and Anto & Mikl went off to find a source of good coffee. While the coffee took what seemed like an age, with the barista taking quite a bit of care, it was still ready in time for us to wander down to the platform and find which bit of the platform should end up with our carriage. With just under 5 minutes to go the train dutifully pulled into the station & we deposited the kids, bags and all the passengers in their correct places. Right on time the train rolled peacefully out into the darkish morning and we were on our way.

We then cracked open the pastries and coffee and had our breakfast picnic on the train. The kids were pretty pleased! 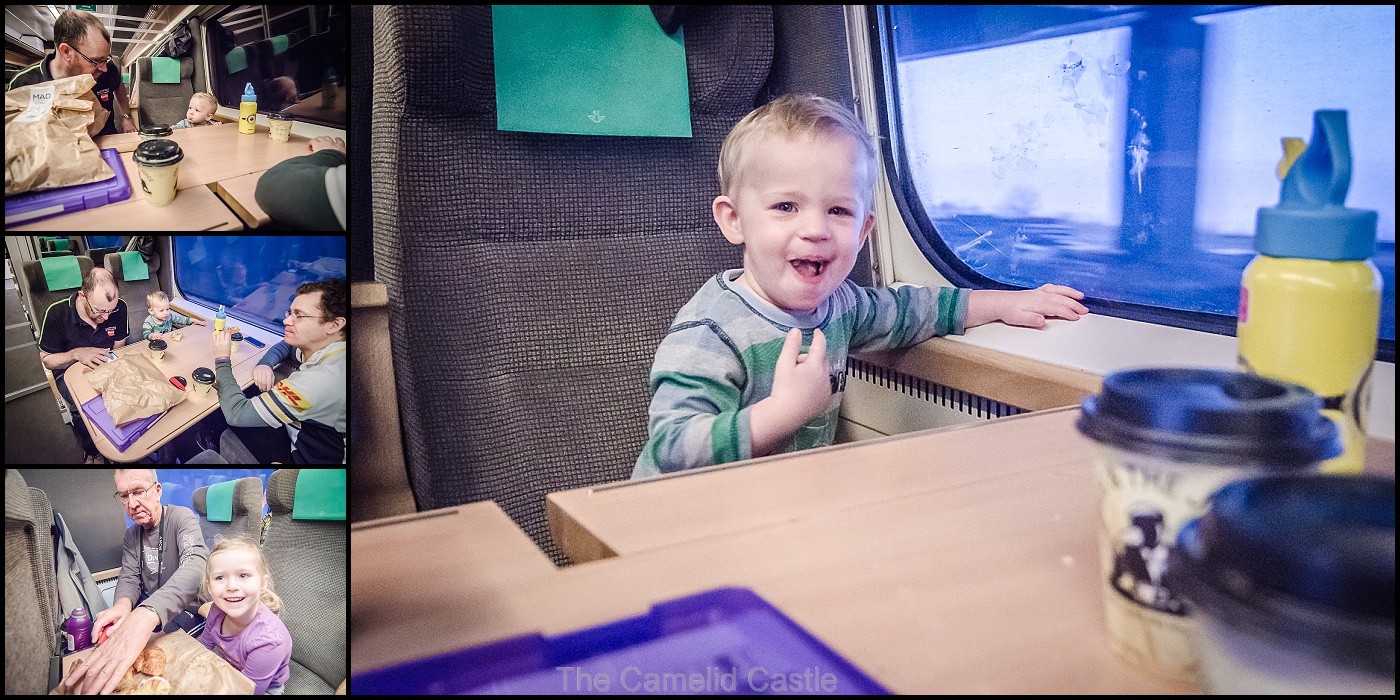 The train followed a now familiar path  – all of a sudden we realised we were in a tunnel, and concluded we had snuck into the under-sea tunnel that links Denmark with the Øresund Bridge. Shortly after we popped up above the sea & were racing over the bridge towards Sweden. All was going swimmingly until the train pulled to a stop just short of the end of the bridge, and a PA announcement was made letting us know there would be a check of our identification and could we please have either our government ID, or other papers available for inspection. We later found out that these checks were not a ‘border check’ as that would be technically illegal, but however a permitted non-border (they occurred after we had entered Sweden) ID-check. Apparently in October Sweden accepted more refugees (mostly from Syria) that it had in the entire 12 months before, and the social services were horribly overworked – the ID checks were apparently one attempt to get some control over the deluge. Given we possessed Australian passports we didn’t warrant more than a seconds glance before the officials moved on down the carriage. We were quickly back on our way – and fairly rapidly into the grey and gloomy day, if the train trip is representative Sweden is a 100m wide wet grey country – as for most of the trip this was pretty much all we could see out the windows.

Since there was really nothing to look at (the trip was supposed to be somewhat scenic!) the kids watched TV on Astrid’s tablet and the adults did ‘work’ on their laptops. Note that work meant surfing the net, playing computer games or editing photos and writing blog posts. The over 5 hours went fairly fast, even though re-supply of coffee was needed at one point. We had plenty of brie, crackers and biscuits with us to snack on should our carbohydrate levels slip below maximum. Yes we do train trips with a wheel of brie (can you tell we’ve done this before?).

Astrid was tired after a big few days in Copenhagen so happily slept. Soren was over-tired and refused to. We eventually won though. Just as the grey lifted slightly and we could even make out the odd house!

The trip was very painless, if on the long side.  We only cruised at between 150 and 200km/h since there are quite a number of stops between Copenhagen and Stockholm. Both Anto and I find the tilt train a little nausea inducing at times (we had this problem on our last trip to Sweden) but it is certainly less effort than flying and much more comfortable for the kids (and adults).

Once off the train (and with snow suits on and 7 million bags) we popped our head out the station doors to see a lot of rain and the sign for our hotel. We were staying at the Radisson Blu Royal Viking hotel. When we are having short stays in locations we try to book something near to the train station to minimise the moving of bags. This hotel certainly fit the bill, it is literally outside the train station.

We were pleased to be out of the wet and cold and not to have to walk far with our bags.  Our friend Bjorn, was waiting for us in the foyer of the hotel (he’d caught the ferry over to Stockholm that morning).  The kids were happy to see the giant Christmas tree in the foyer and to be off the train. 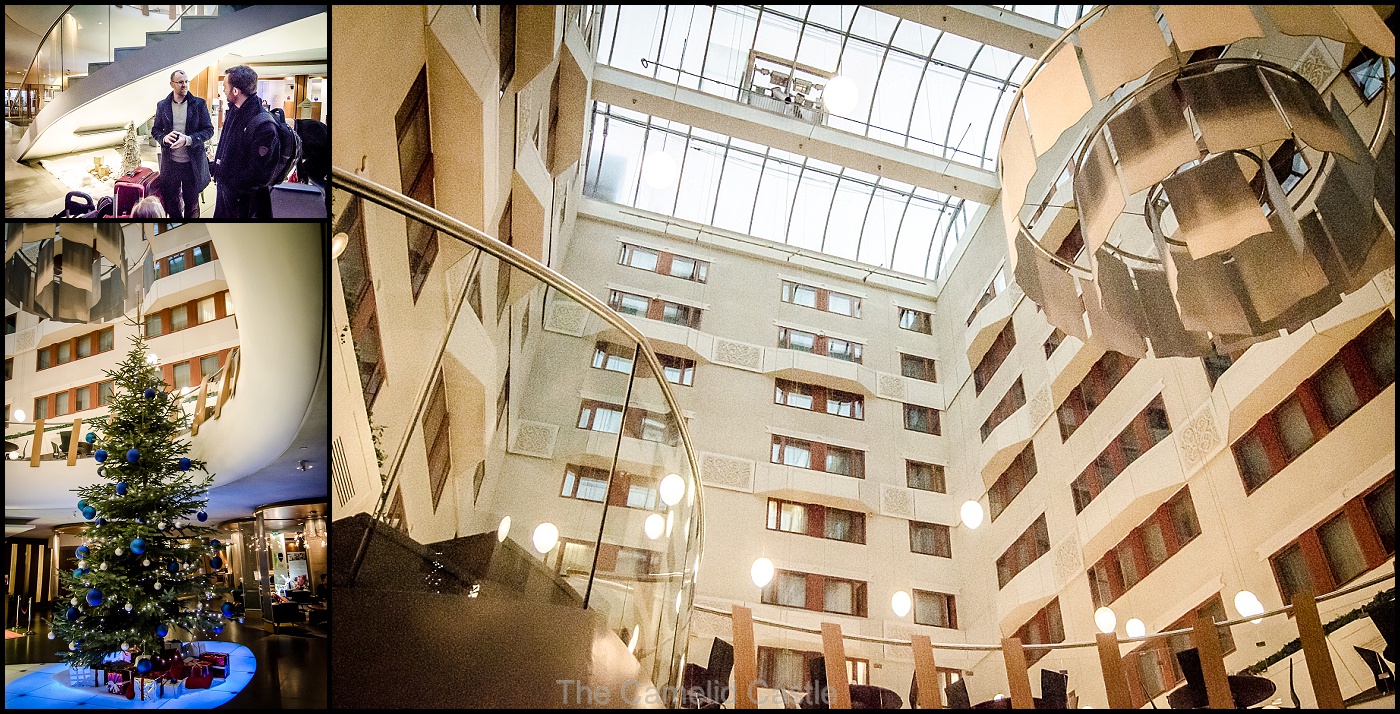 We checked in and made our way up to our rooms (which were on the 3rd floor and had a lovely view of central station).  Anto, the kids and I had a family room, which was 2 rooms and quite spacious with an enormous bathroom.  Mikl and Alan were across the hall from us in a slightly more petite room. Once we’d trashed the hotel rooms in about 3 second by depositing all of our luggage and coats, we packed up and decided to head out in the rain again, given we needed both food and to stretch our legs.

Anto, Astrid and I visited Stockholm on our 2012 trip. We only had 2 half days in Stockholm (either side of our trip up North to visit Bjorn and his family) so were keen to see a little more of the city on this visit. Our last visit was in October and it was freezing! We were expecting it to be even colder this time around given were visiting in December. In fact snow was forecast for the day of our arrival but it turned out it was just rain.  Undeterred, we wrapped the kids in their suits and headed out to walk around Gamla Stan (the old town).  It was now after 2.30pm and it was dark. The sun sets by this time in Winter, so there was even less light than we had in Copenhagen.  Luckily the city was brilliantly lit up and very pretty. 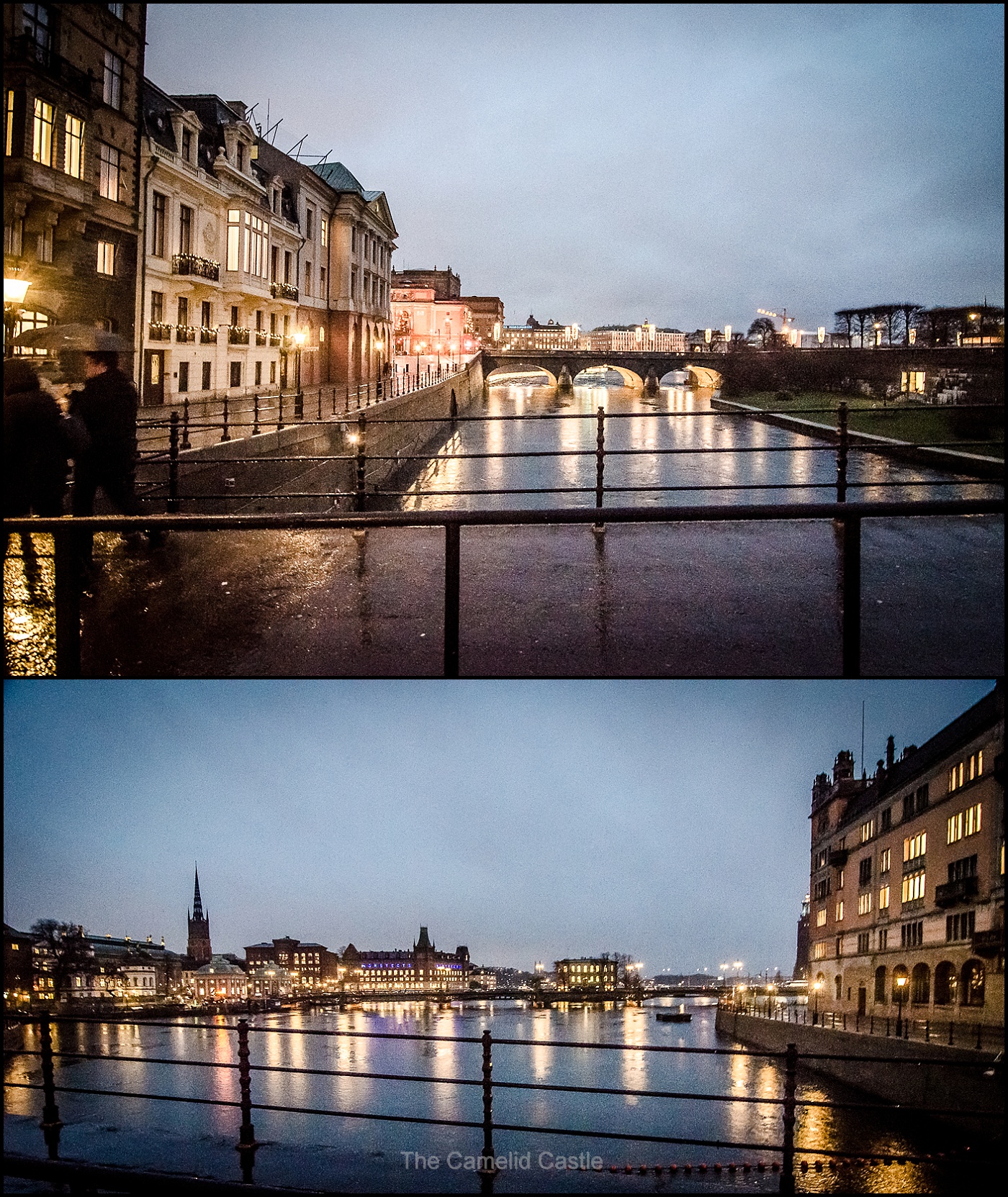 Since we hadn’t had a proper lunch we were all feeling a little peckish.  We stopped into a cafe in Gamla Stan for waffles with chocolate sauce and cream and some coffee for the adults.  The kids did not complain! 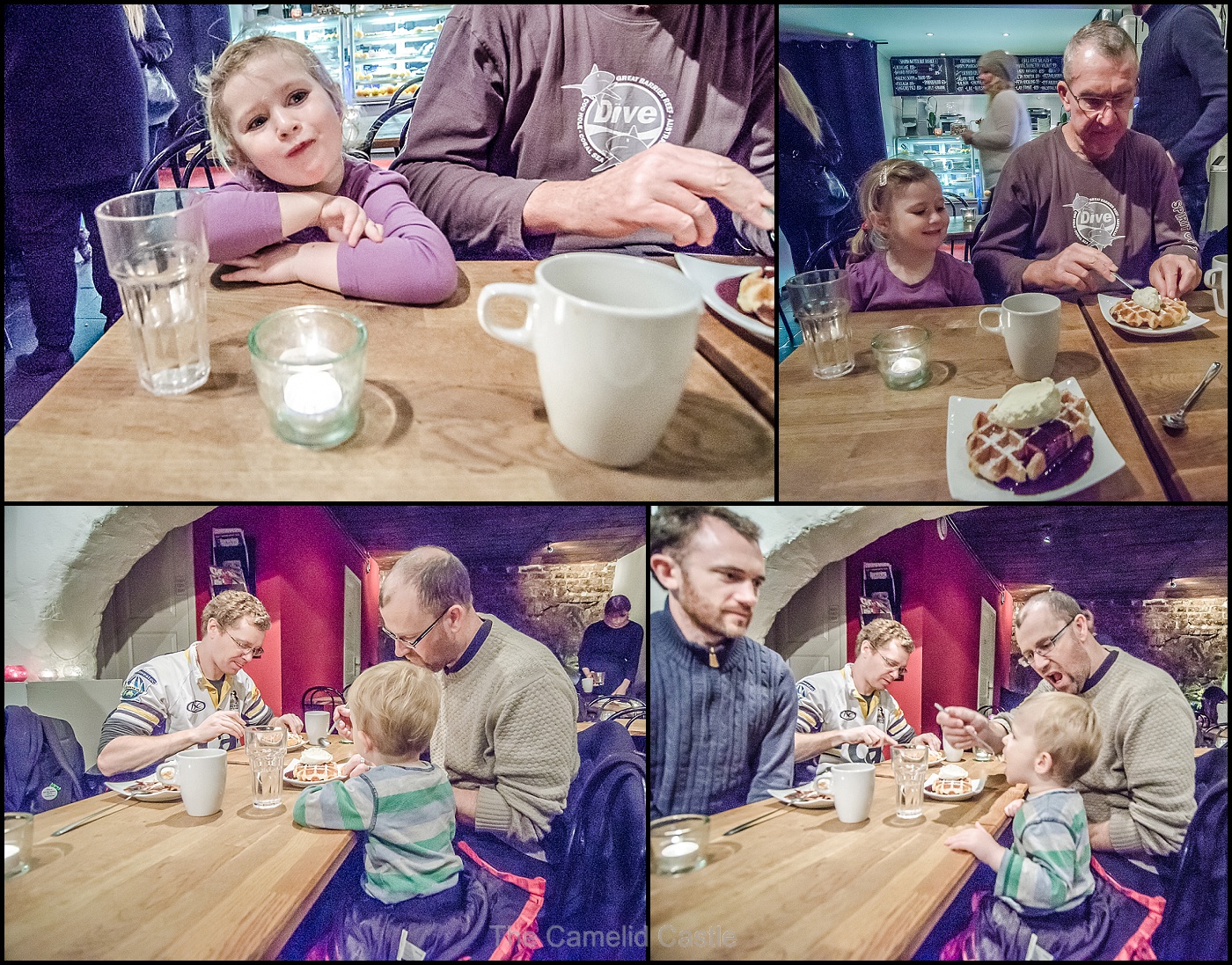 Once we were slightly warmed up by waffles, we headed back out into the rain and wandered Gamla Stan some more.  The kids did like the big Christmas tree in the square.  We also saw some guards marching about in the rain, which was an interesting sight. 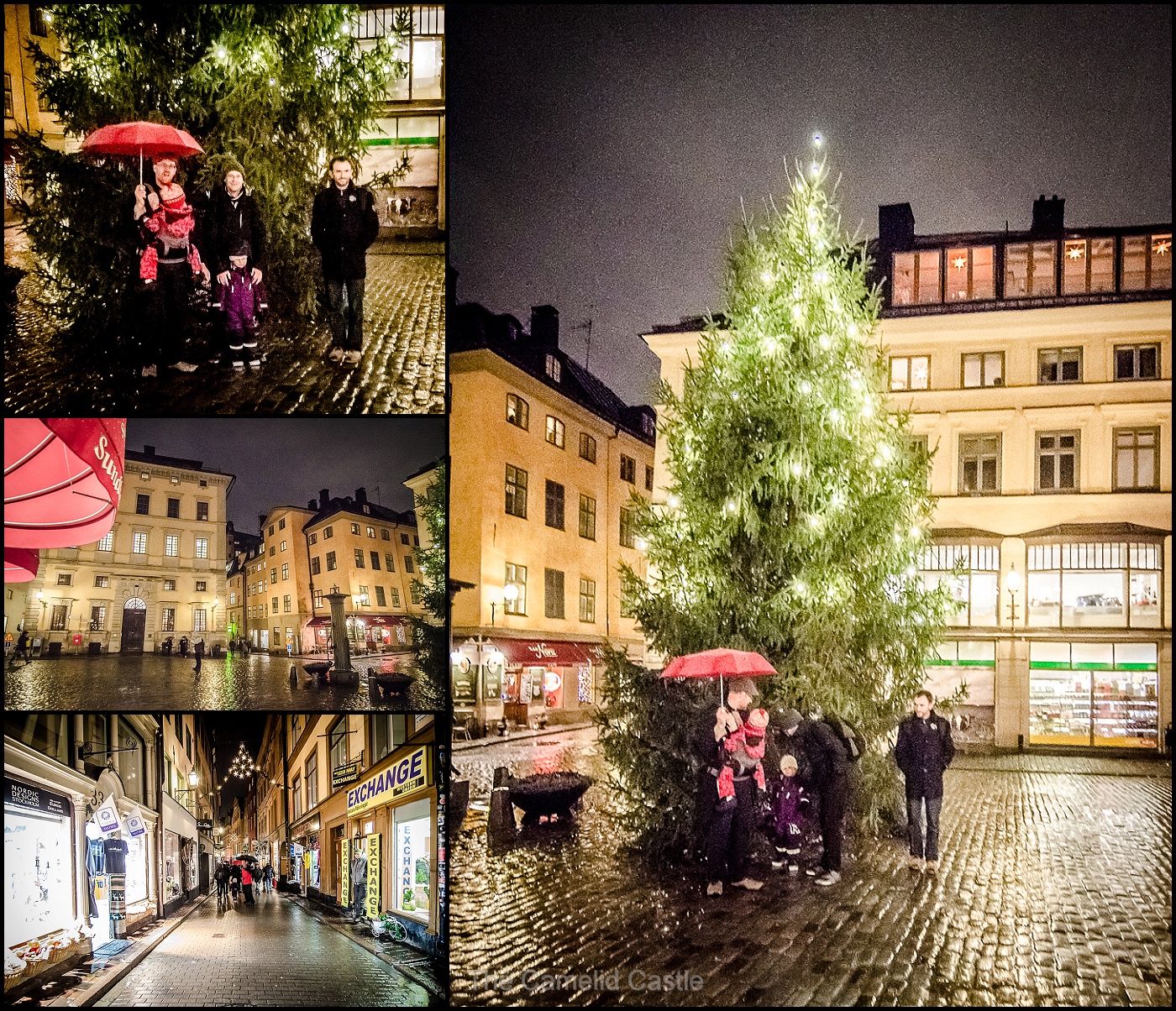 After we’d wandered most of Gamla Stan the kids were getting pretty weary.  It’s really off-putting being dark not long after 2.30pm. It feels much later than it is! Despite being a quiet day with 5 hours on the train we were all tired so voted for an early dinner.  I requested something with a vegetable other than potato, so we decided on a Thai Buffet that Bjorn recommended.

The kids were happy with prawns, pad Thai and spring rolls. They even ate a couple of vegies in order to get dessert (which was soft-serve and various fruits and mousses). I was happy to have an option of vegies and to be sitting somewhere warm. 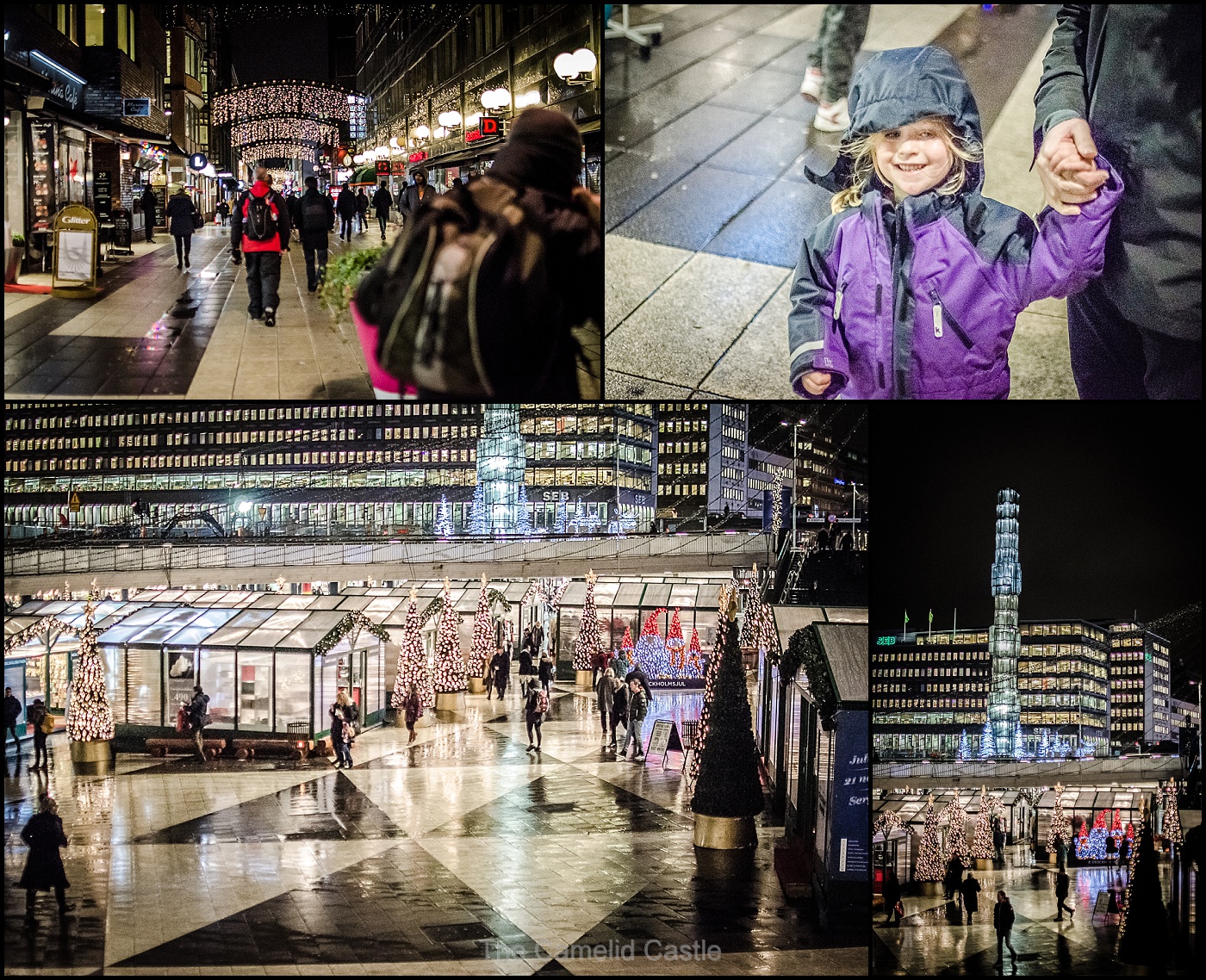 We were finished dinner well before 6pm but decided to get the kids back to the hotel for showers and bed. There were an abundance of lights to look at on the short walk back and the rain had briefly stopped.  Luckily we had 2 more days in Stockholm and the weather forecast for the following days was much improved. The kids were in bed and asleep by 7pm and Nic also called it a night, at least as far as going out. There was a quantity of photo editing and blog post writing to be done while the sleeping kids were supervised.

Bjorn had arranged for tickets for the boys to the newly opened Star Wars movie, at the exceptionally adult time of 21:15 (or about 45 minutes after our ‘normal’ holiday bedtime) we filled in the time with watching Norwegian comedy videos, drinking coffee and chatting. The cinema was only a 10 minute stroll away, and aside from everyone speaking a ‘funny’ language could have been a cinema anywhere. We were seated on a Balcony, something none of us had experienced for years. There was the normal array of previews and Ads, a reasonable amount of which were in English. Then just as you might expect the movie to begin, the lights were turned back up and an usher walked out in front of the screen. Apparently a recent trend in Sweden is to have someone introduce the movie and tell you where the toilets are etc etc, luckily the process was pretty quick and the movie was started. Two hours of action packed adventure later and this episode came to an end, leaving plenty of story line to expand on in the next episodes. Post movie Bjorn escorted the weary travelers back to the hotel, before we all collapsed into bed for a well-earned rest.

Stats for the 17th of December: Temperature was -1 to 4 degrees with a mean temperature of 2 degrees. There was pretty much non-stop drizzle for the afternoon making everything pretty damp and cold. We walked a total of 9.5km for the day, which given we were sitting on a train for 5+ hours seems to be a reasonable effort. For the 3rd night in a row we managed to feed the kids vegetables. As a bonus Nic managed to have some food that contained something other than a Grain. The level of pastries, waffles and coffee consumed for the rest of the day, however, was high!