Our final day in Stockholm, definitely did not bring snow. We did see sunshine though (for the meagre amount of daylight hours).  There was a visit to Skansen (the open air zoo and cultural museum), the mighty Vasa museum with its preserved viking ship, and a flight to Gotland, the Tasmania of Sweden! This post is mostly by Anto, given Nic is soooo far behind on the photo editing!

We woke up to another winter morning in Stockholm where our ‘cold’ clothes were going to have to spend their day in the suitcase. We managed to get ready in a not awful amount of time & headed down to stock up on swedish breakfast treats at the Radison Blu’s buffet. The buffet although pretty much identical to the day before had a good selection of hot and cold food and the mix-yourself muesli station was still a hit with the kids. Once again the unlimited coffee came in handy.

We decided to start the day with a trip to Skansen and Djurgarden, which should have been a pretty simple exercise given our 24 hours public transport cards. The reality turned out somewhat different… We started (going wrong) by jumping on a tram heading the wrong direction, a last-minute change of tram number didn’t give Anto quite enough time to update the google map with the correct option – however in a number of seconds after the tram passed the first stop it was increasingly clear we were not going to the correct place. With little to lose we jumped off the tram to wait for the one going the other direction. Only to find out there was a 14 minute wait….. A quick search later and it appeared with a few hundred meters of walking (about 600 from memory) we could grab a subway instead – so off we went. After some juggling around on the trains we were presented with walking directions to our destination – up quite a hill in the process. As we got close we were presented with a lovely view over Stockholm and the harbour, but nothing like Skansen. 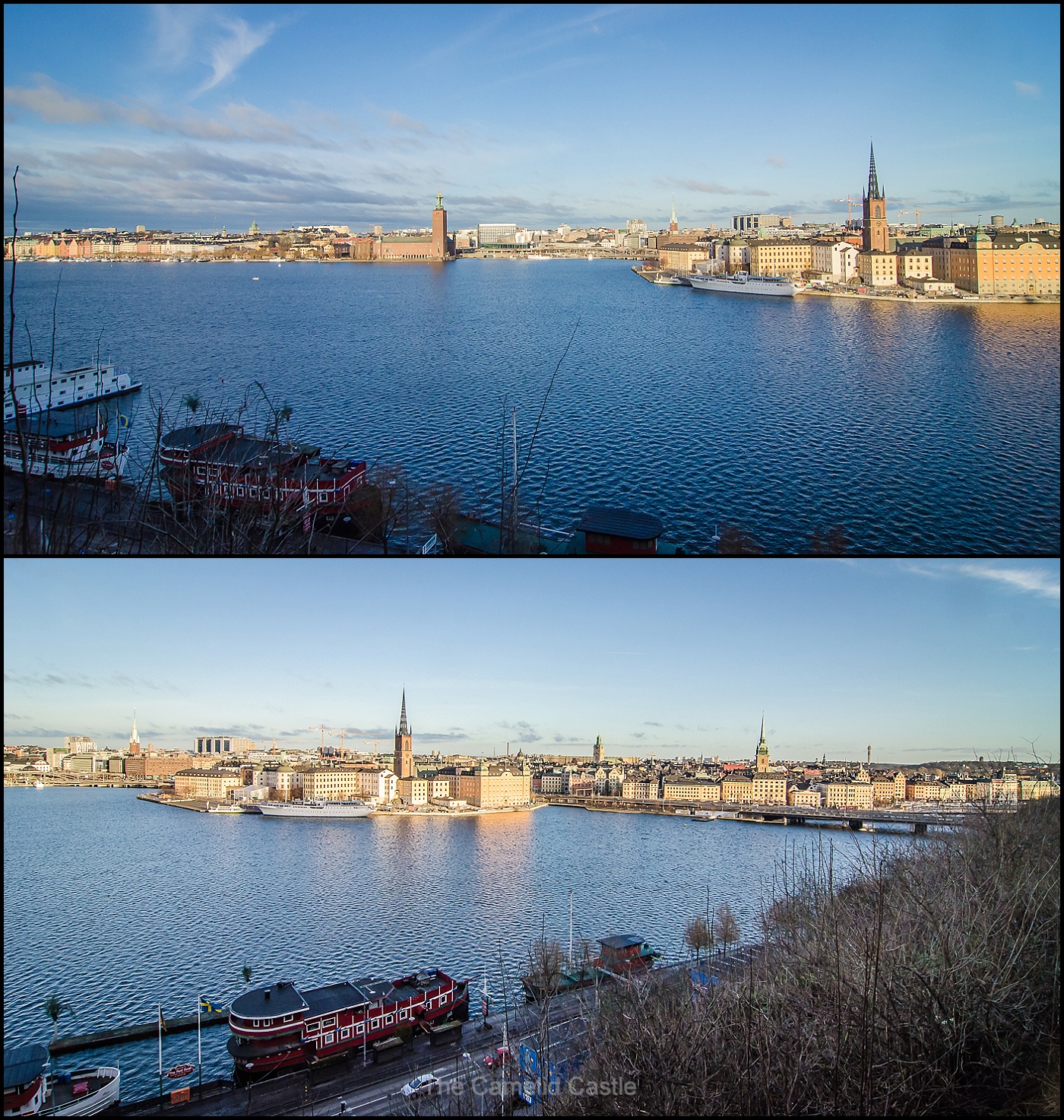 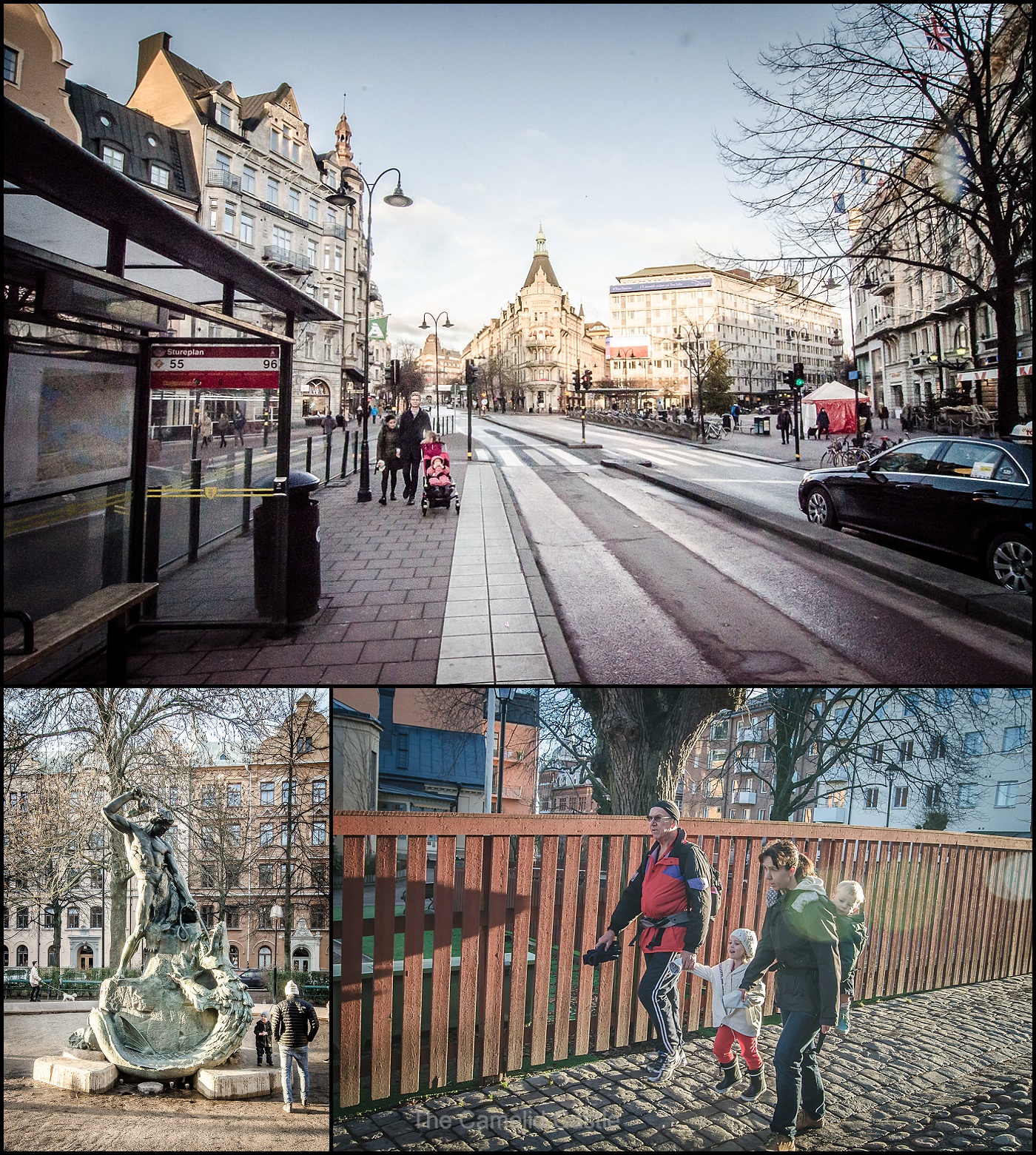 Which was about when we realised that at some point the destination in google’s map had switched to the photo point of the night before – which turned out to be a great place for a photo, but a lousy place to visit Skansen. Undeterred, we plunged back onto a (now correct) tram and made our way over to Djurgarden.

Although now running later than planned (by about 1.5 hours) we decided to head into Skansen and see what we could find. Skansen is a sort-of theme park, which attempts to capture how life in Sweden was back in the ye-olden days. While it might have been full of fun in summer today it was fairly wet, cold and muddy. We bravely headed up the hill (ok we rode a huge escalator up the hill) in search of authentic Swedish animals. We managed to locate a handful of cows,  a couple of fluffy black sheep, some goats, a few chickens and some Gotland lambs (which although fully grown are still apparently called lambs). 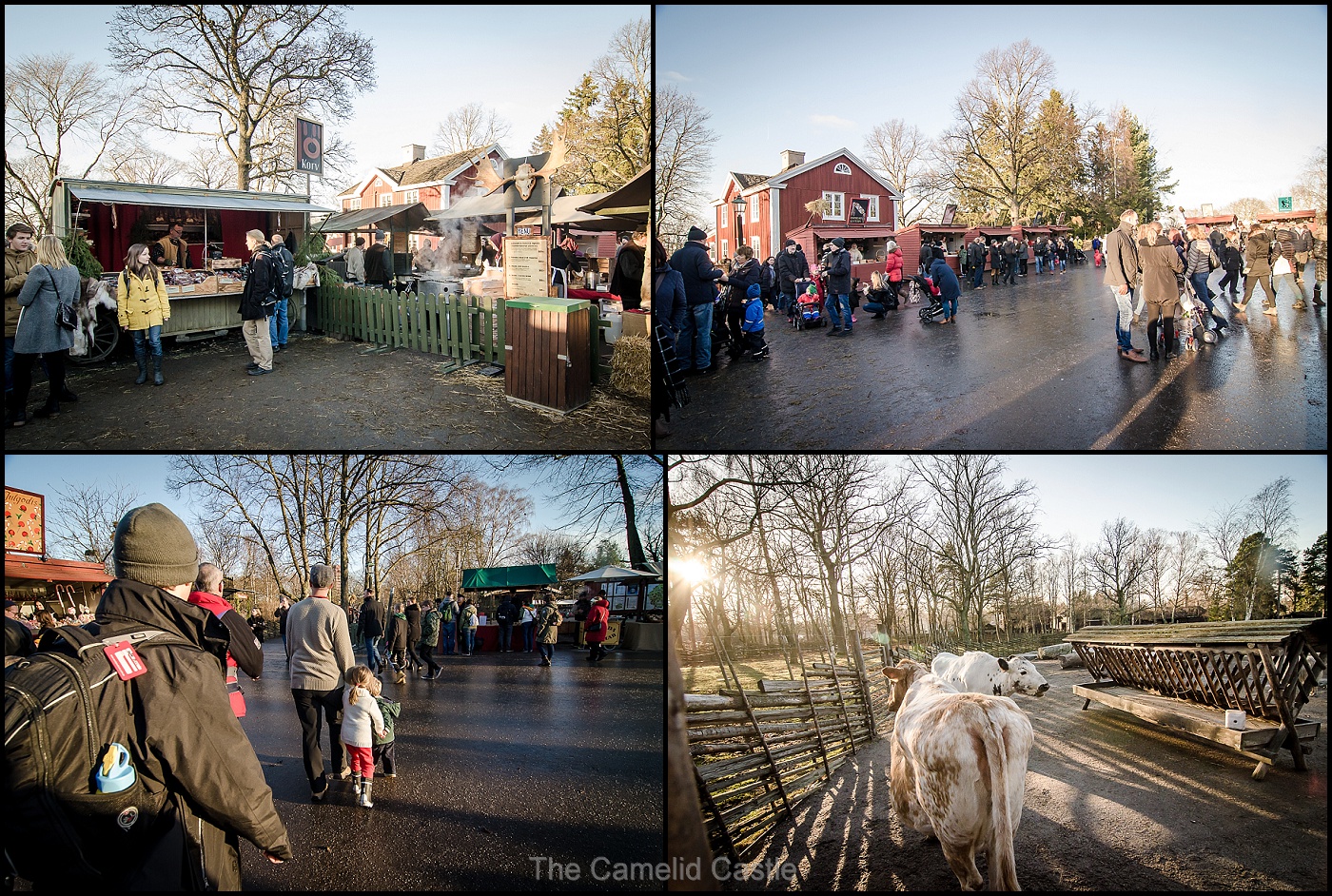 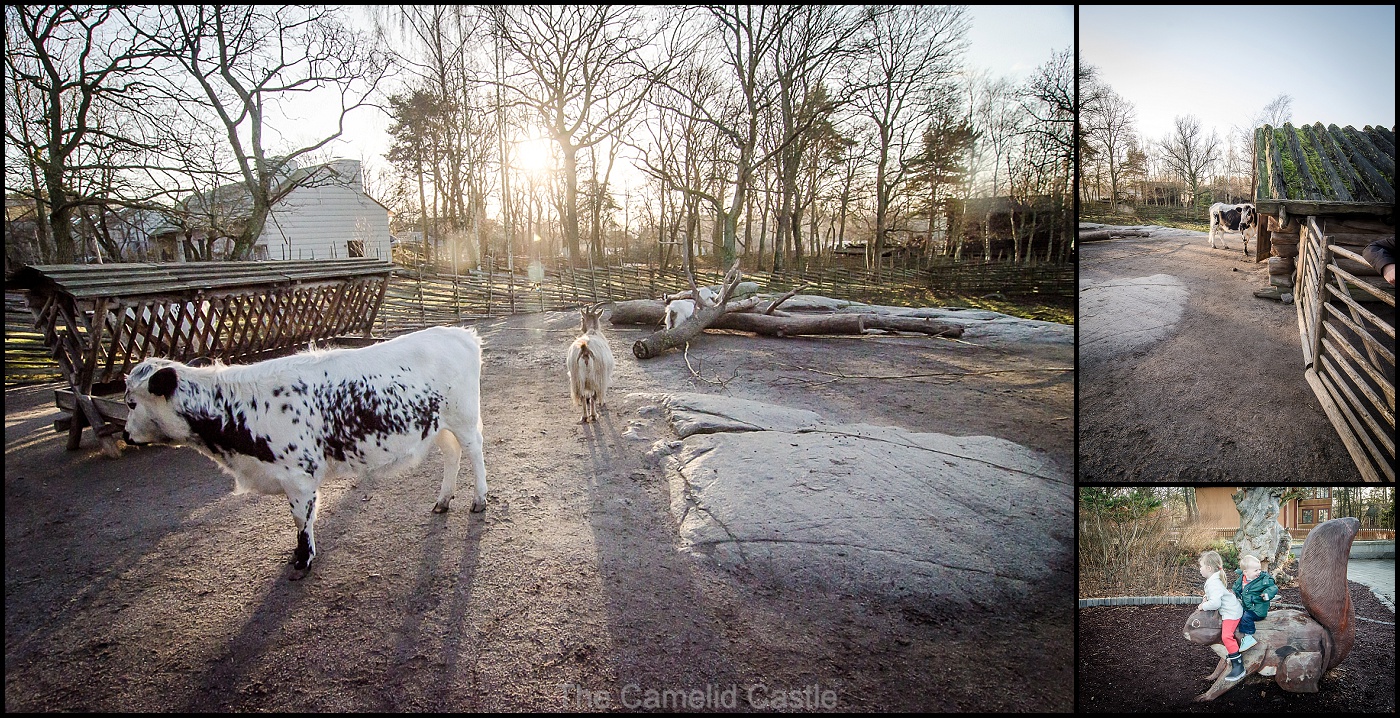 After grabbing a bite to eat in the Christmas markets – hot dogs with silly buns for Alan and Michael, and sausage and meatballs on a stick for Antony, with the kids and Nic left to eat the snacks we had carried in with us,washed down with a hot-chocolate. We decided to head down to a more entertaining destination – the Vasa museum. 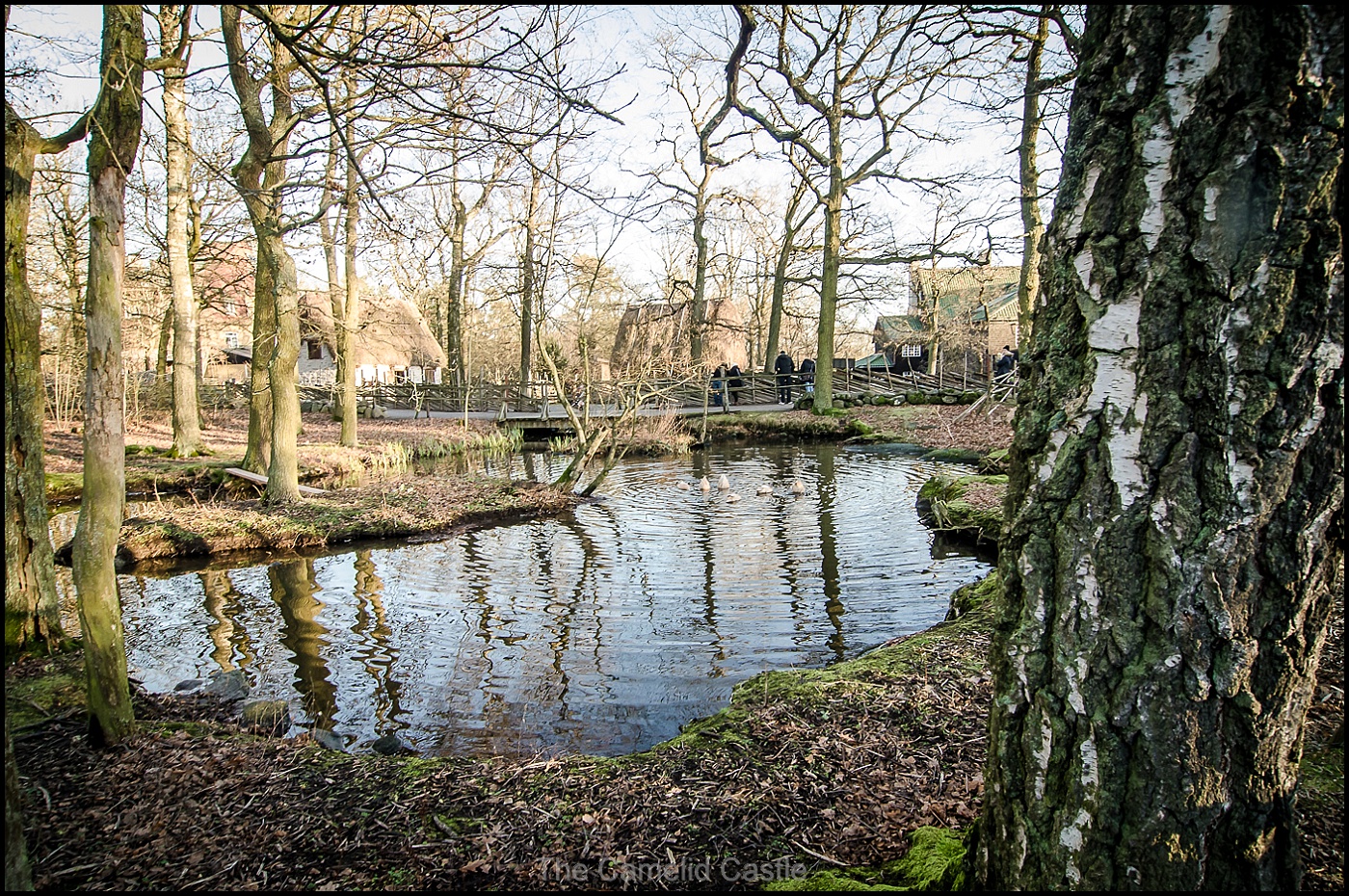 After looking forward to visiting Skansen we all found it a bit underwhelming. It is huge and there are several sections with fare rides (not open when we were there), monkey and bird exhibits (that seemed average compared to other things we had seen) and Christmas markets. The markets were ok, but not worth a visit on their own.  The houses and buildings and animals were worth a look, but really after half an hour of traipsing around in the mud we’d had enough and it didn’t justify the exorbitant entry fee in our opinion. Lots of things (like fare rides, horses and carriage and pony rides etc) are additional on top of the entry fee.

We headed out of Skansen we caught the tram the two stops back towards Nordiska Museet and Vasa Museet. The Nordiska Museet is a beautiful building. On our two visits to Stockholm we’ve never been in (it probably isn’t that interesting for the kids in our limited time) but the building is worth seeing. The Vasa Museet is also an interesting building, but a totally different style, it’s shaped like a ship and has a mast out the top of the building. 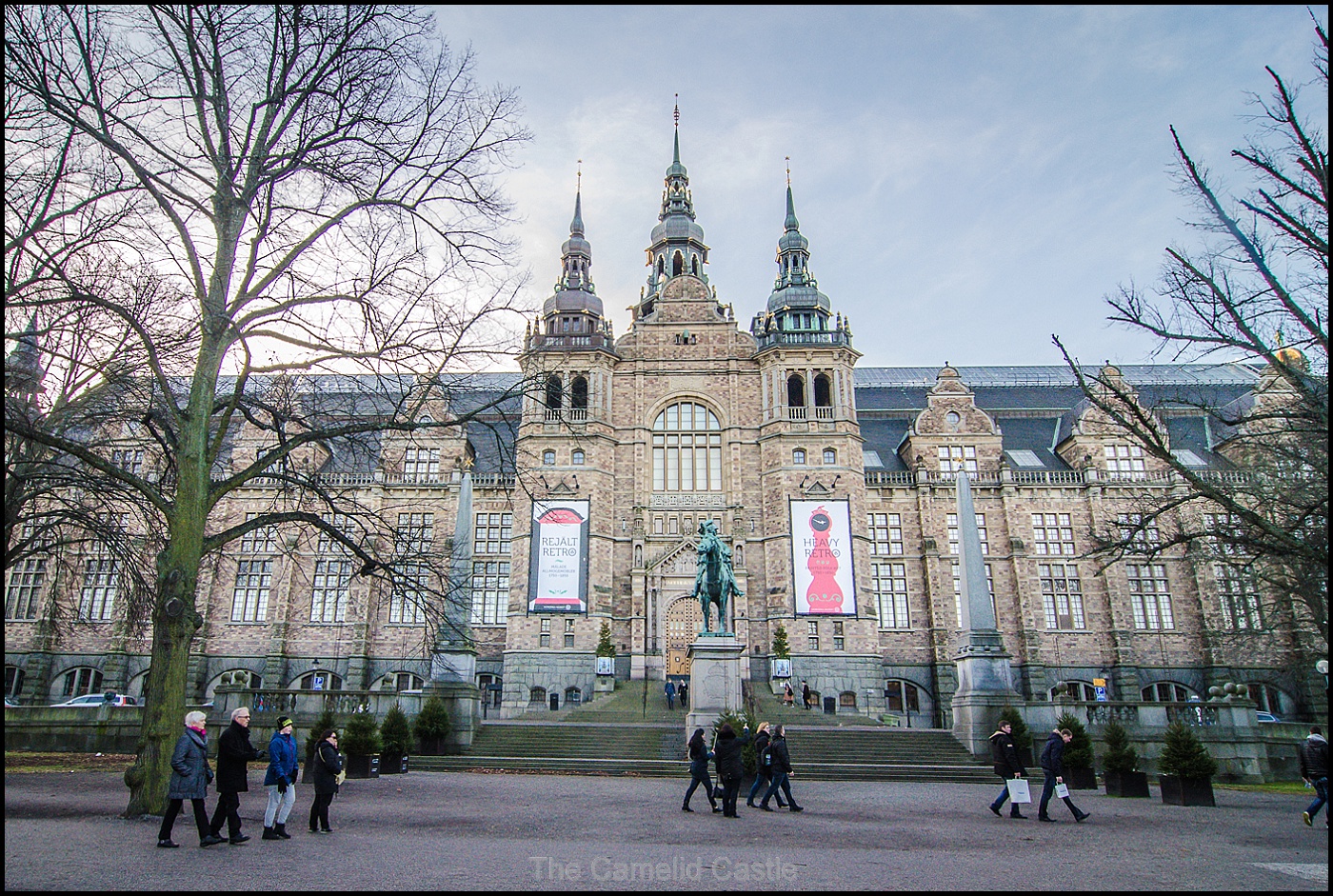 Although Nic and Anto had been to the Vasa Museum before, we both were keen to head back for another visit. The Vasa was a fairly huge (~1640) wooden viking ship, that had the dubious history of sinking about 20 minutes after it’s launch – to double down on the pain they had given pretty much the whole city the day off work to watch its triumphant launch. The poor thing then sat at the bottom of the harbor for the next 300 odd years, before being raised, almost whole, and re-constructed. The museum now holds a pretty much intact ship – with some small portions being replicas.

We started with a look at the scale models and the history of the Vasa and it’s retrieval. Then it was time to look at the ship from all the different levels of the museum.

There is a walkway right around the ship, with levels from up above the deck all the way down to below the keel. It’s a fairly awe-inspiring sight, knowing that the entire thing was created by hand – had it not have immediately sunk it would have been all the more impressive. The amount of hand-carved wood and the sheer weight and size of the vessel is amazing. We must note that the engineering skills of the boat builders was probably not what it should have been given how quickly it sunk!  The photos do not do justice to how huge this thing is and the detail in the ship. If you are ever in Stockholm do pay the Vasa a visit! 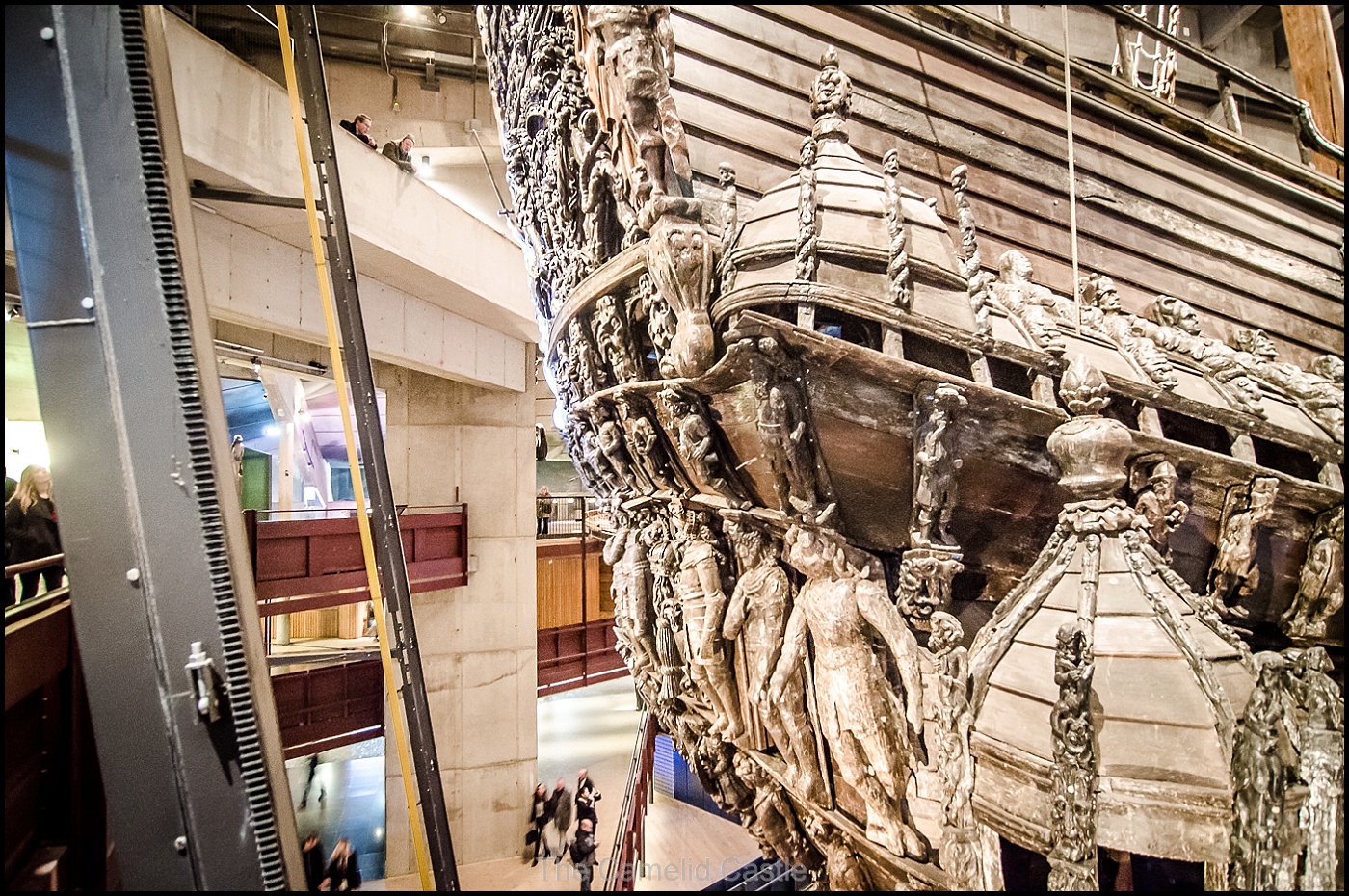 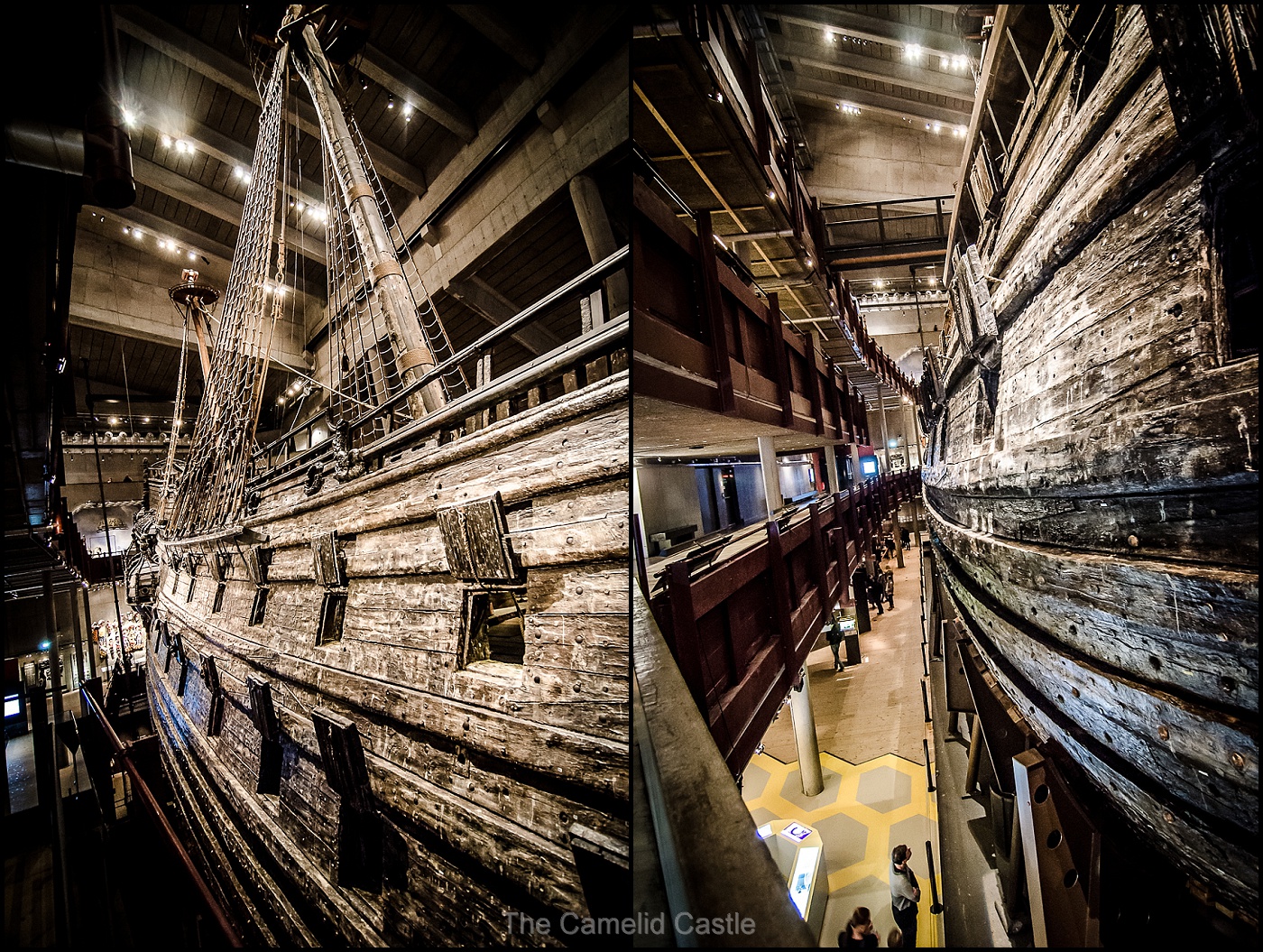 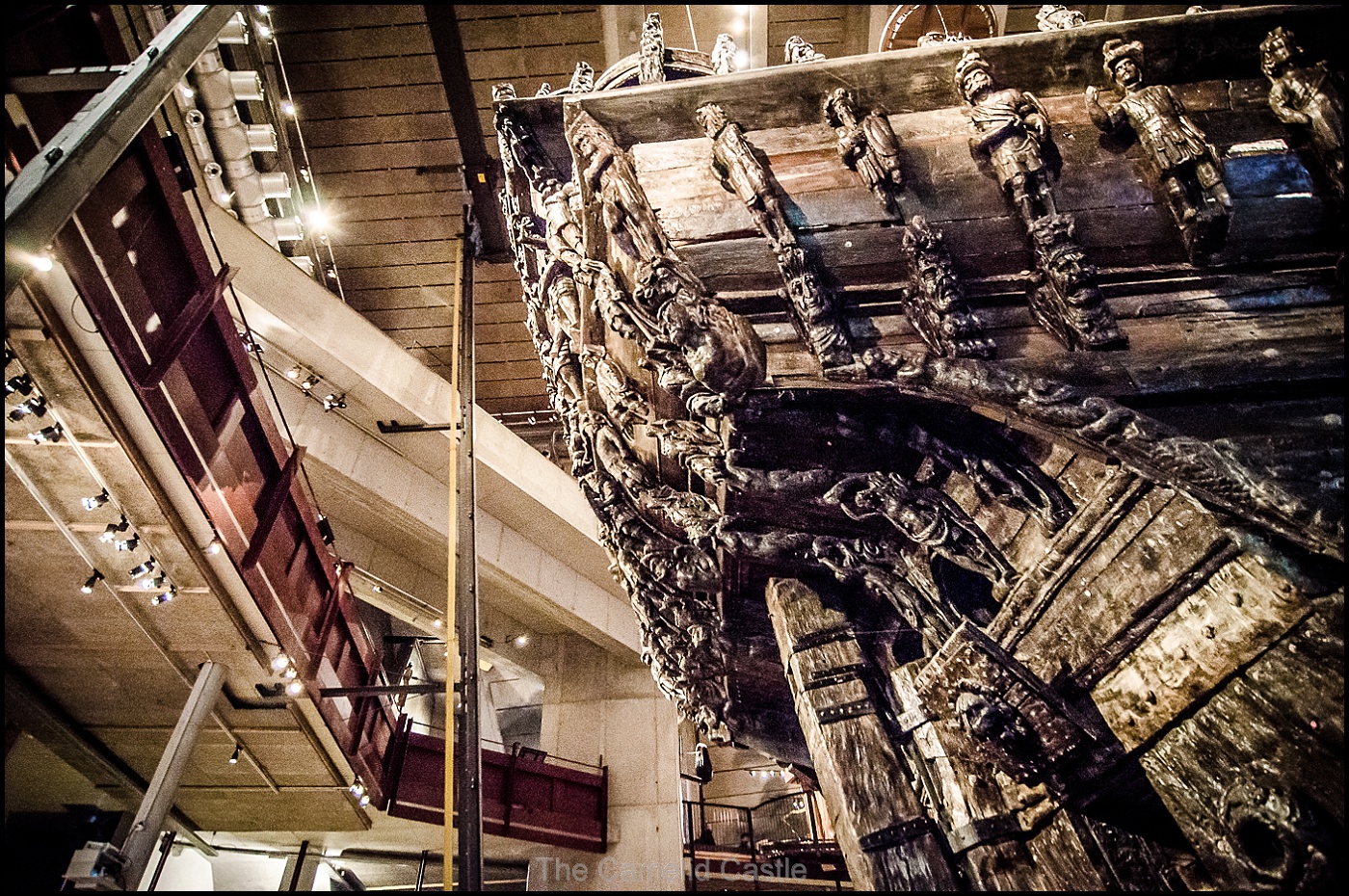 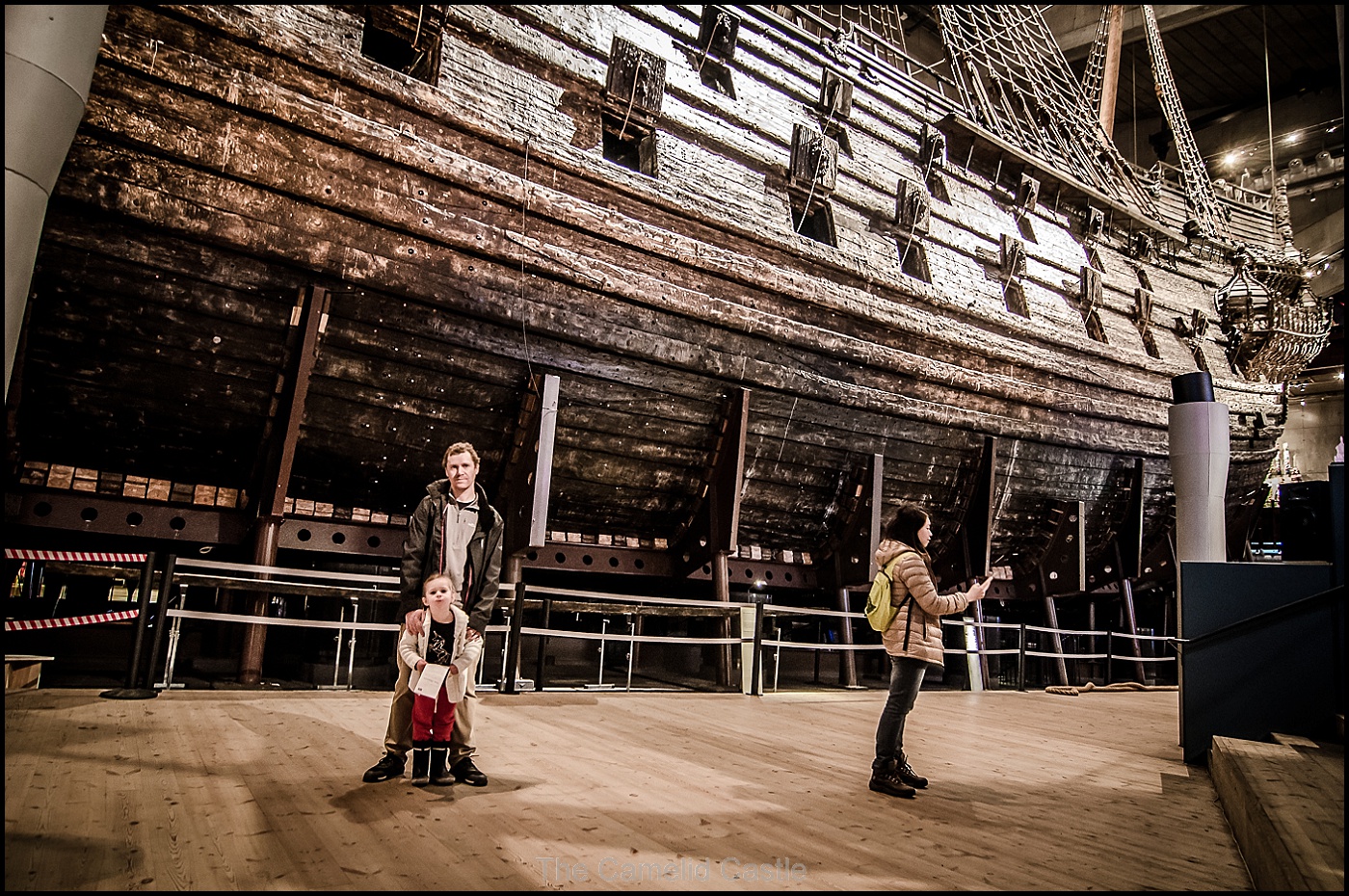 After almost an hour wandering around the kids attention span had been well and truly consumed, so it was time to jump back on a tram (the correct one this time) and make our way back to the hotel.

On the way we decided that there was time for one last coffee – and attempted to find a venue not packed out by the Saturday afternoon Christmas shoppers. We eventually found a likely looking bakery / coffee place and coffee and pastries were procured. We selected a chocolate ball (apparently made of chocolate, butter and oats rolled in coconut) and a saffron bun. The chocolate ball was both interesting and delicious, however there were mixed feelings about the saffron bun – with most agreeing that while interesting it’s not something we would be seeking out in the future. 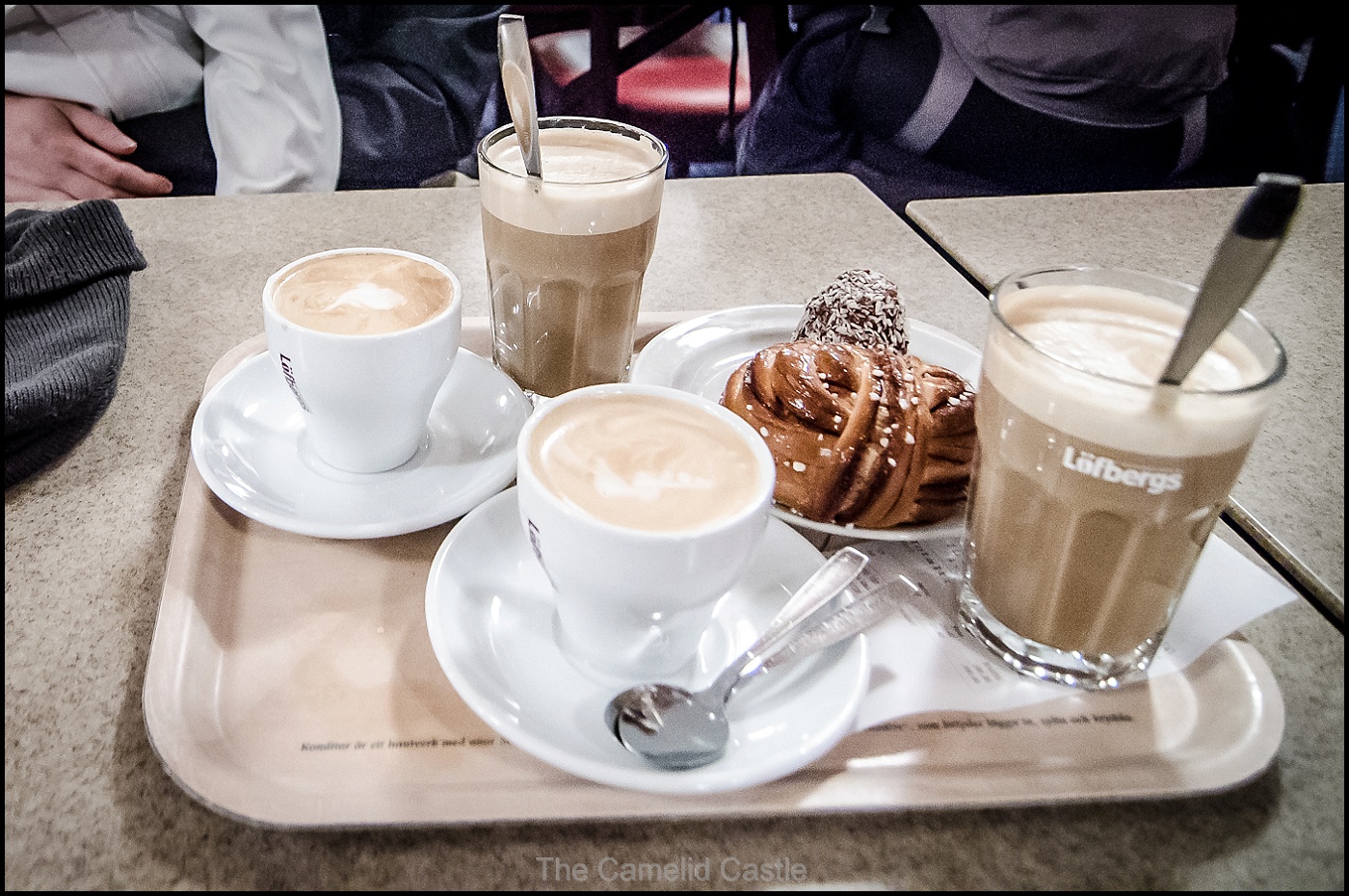 All fueled up we set out on the rather short walk back to the hotel to retrieve our vast amount of (hopefully under the airline weight limit) bags.

Minutes later we strolled (or staggered under the weight of our bags) out of the hotel, around about 2 corners and onto the Arlanda express platform. The Arlanda express is a private railway, which while being incredibly fast – about 15-20 minutes to the airport rather than an hour) usually costs way too much for us poor Aussies. Luckily for us they had a Christmas promotion that allowed us to travel on it cheaper than the much slower bus (which we took on our last visit to Stockholm). As promised within a very short space of time, due to travelling between 150 and 200km/h, we were deposited back at the airport and checked in for our flight to Visby (in Gotland, Sweden).

We were flying SAS(Scandinavian Airlines), which seems to have embraced the self-service mantra, after we printed our boarding passes and bag tags we wandered over to the (self-service) bag drop-off, which was going swimmingly until the last bag was 2kg over our limit. Big red screens and flashing lights resulted, followed (eventually) by someone from SAS coming over to see what was going on. A short amount of ‘I’m just a silly tourist’ discussion later and we were permitted to send on the bag, now with a nice big heavy tag attached.

We were about an hour and a half early for our flight….. mostly due to being very efficient with collecting our bags and getting to the airport, and partly because it had already been dark for 4 hours so we felt like it was way later than it really was.  This meant sitting around an airport terminal entertaining the kids and finding something for dinner.  We had most of a very large wheel of brie, some Swedish crackers and some baileys that needed using up. Guess what we had for dinner, while sitting at a deserted airport gate. Note that the kids didn’t get any baileys but did get to watch Peppa Pig on Astrid’s tablet. Mikl and Anto declined to pay $16AUD per beer so the baileys had to suffice until our flight arrived. 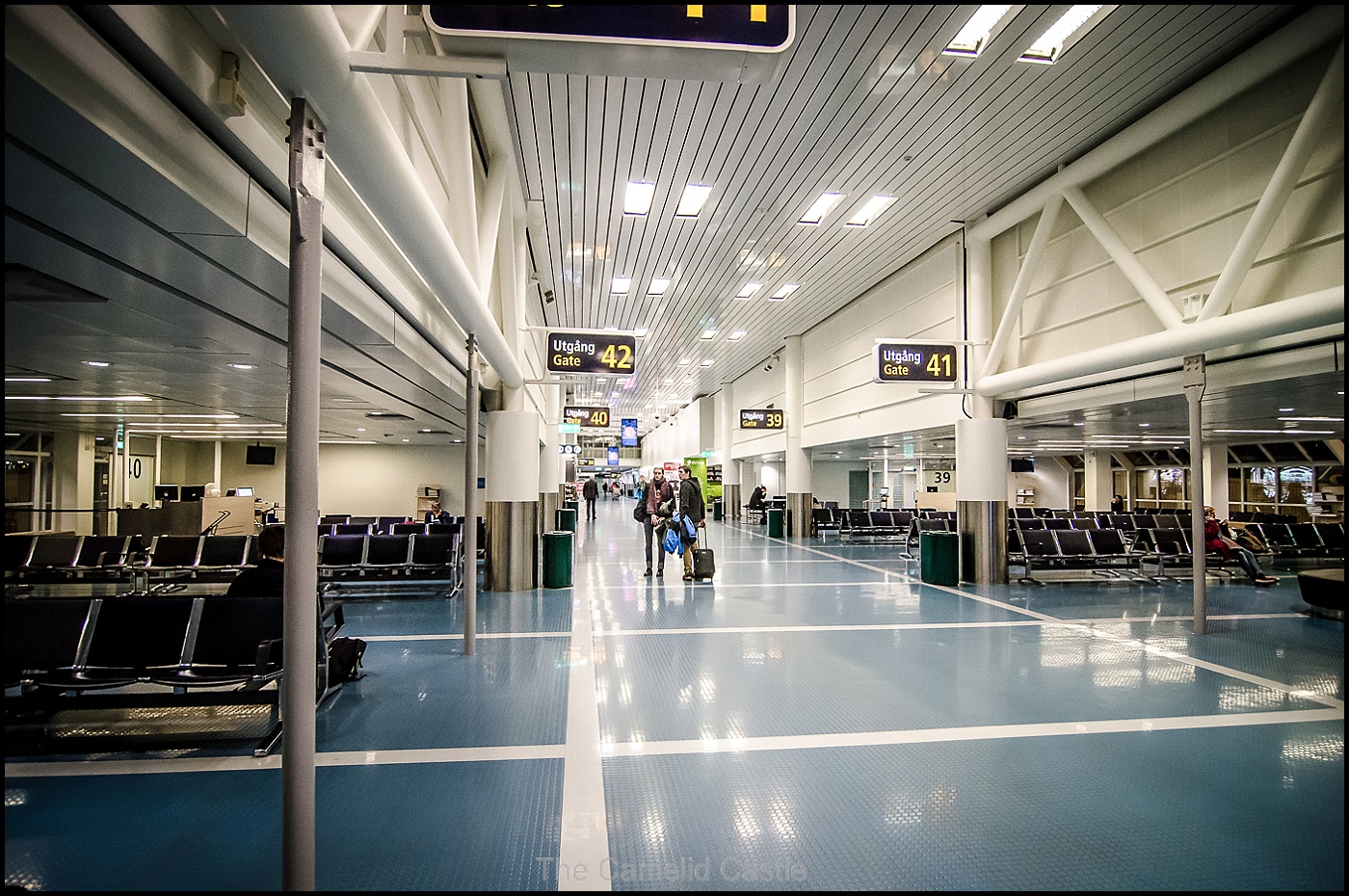 The flight over to Visby was pretty much without incident. The only amusing part was 5 minutes after taking off, the crew announced that they would be serving refreshments (that you had to pay for, we had the ‘cheap’ seats) but noted they were out of hot water.  They then rolled down the aisles with the refreshment cart saying ‘tea or coffee anyone, oops no we are out of hot water’….. over and over again!

When we arrived at the other end of the flight, approximately 40 minutes later and at 7.30pm, Bjorn, who had caught the ferry earlier in the day, was waiting to greet us. Between Bjorn (who took the kids in car seats and Anto) and the ever efficient taxi’s we were at the hotel and in our rooms. Although the staff from the very small boutique hotel had gone home we had been emailed the code to get in. After a fairly quick organisation process, the kids were sentenced to bed. While Nic decided brie and crackers would have to do for her dinner.

Having thus far skipped any sensible evening meal the boys and Bjorn headed out to see what delights Visby offered people wanting to eat the wrong side of 8:30pm. We eventually settled on a Julebord (Christmas Buffet) which heavily featured Swedish Christmas standards. This seemed to compose of a large amount of preserved fish and meat, potatoes, vegetables mixed with fish and a smattering of other delicious treats. Bjorn patiently talked us through the ‘traditional’ order of consumption, however there was really too much to try more than a taste of each dish. There were at least 5 different types of herring, a couple of salmon options and matching traditional sauces for each dish. If the main attraction didn’t fill you up there was seemingly unlimited supplies of boiled potatoes and breads. We each had a local beer and a thoroughly good time was had.

Alas everyone was starting to feel the strain of the days activities & we wandered (or more correctly was guided by Bjorn) back to our hotel for a good nights sleep.

Statistics for 19 December 2015 – the temperatures for Stockholm were a very mild 6 to 10 degrees with a mean of 8 degrees (still a December heat wave). When we flew into Visby it was still a balmy 9 degrees. Total walking for the day was bang on 14km, that getting lost in the morning upped the total.  The sausage and pastry consumption had increased from the previous days and there was even some herring on the menu!

The next day we planned to explore Visby, one of the best preserved medieval towns in Scandinavia.