Our Sunday in Visby was spent exploring the walled area of the city, climbing the walls, checking out the Gotland’s museum with its amazing play area, and finished off with Swedish pancakes, burgers bigger than the kids heads and some pretty Christmas lights. 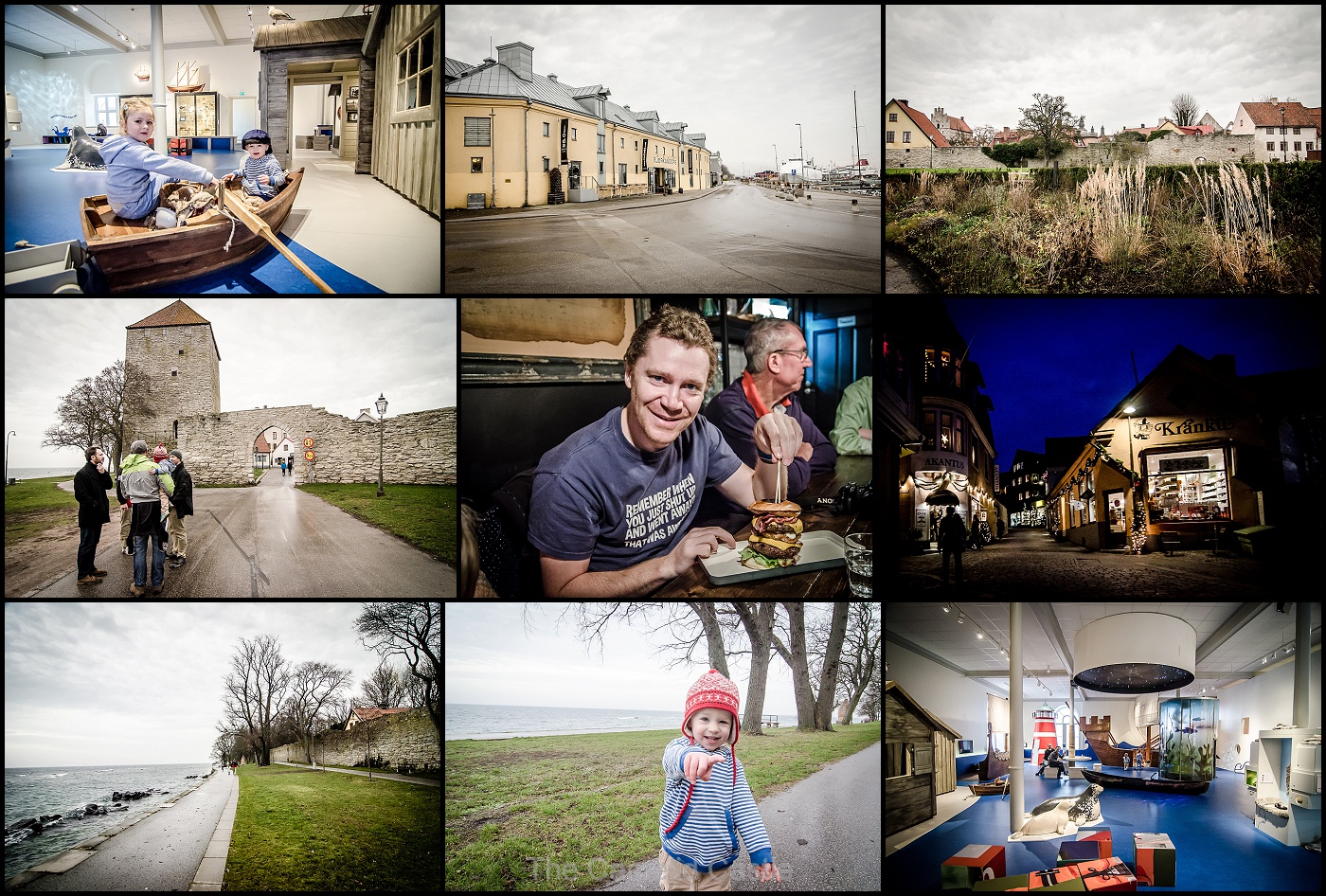 After a late night the night before with our flight into Visby we had a small sleep-in.  Soren definitely didn’t want to be awake so we headed down to breakfast at Hotell Stenugnen. There is a nice make your own muesli station, plus lots of traditional Swedish cold meats, cheeses, breads and sandwich fillings. There is also warm boiled eggs and toast and jams, so we didn’t go hungry.  The coffee was particularly appreciated.

After Soren finally woke up and joined us for breakfast we got organised for the day and met up with Bjorn who was going to show us around Visby.

It was a grey and not too cold (by Swedish standards) but very windy day. We started with a walk along the dock near to our hotel and then headed down to the city wall and along the outside of the wall along the beach. It certainly didn’t look inviting for a swim but the wall was really interesting. Visby has a population of about 24,000, which is half the population of Gotland. The city of Visby is best known for being one of the best preserved medieval cities in Europe and on the UNESCO world heritage site list. The wall was built in 2 stages during the 13th and 14th century and is 3.4km long and surrounds part of the city. Only about 200m of the wall is missing (in various small sections). 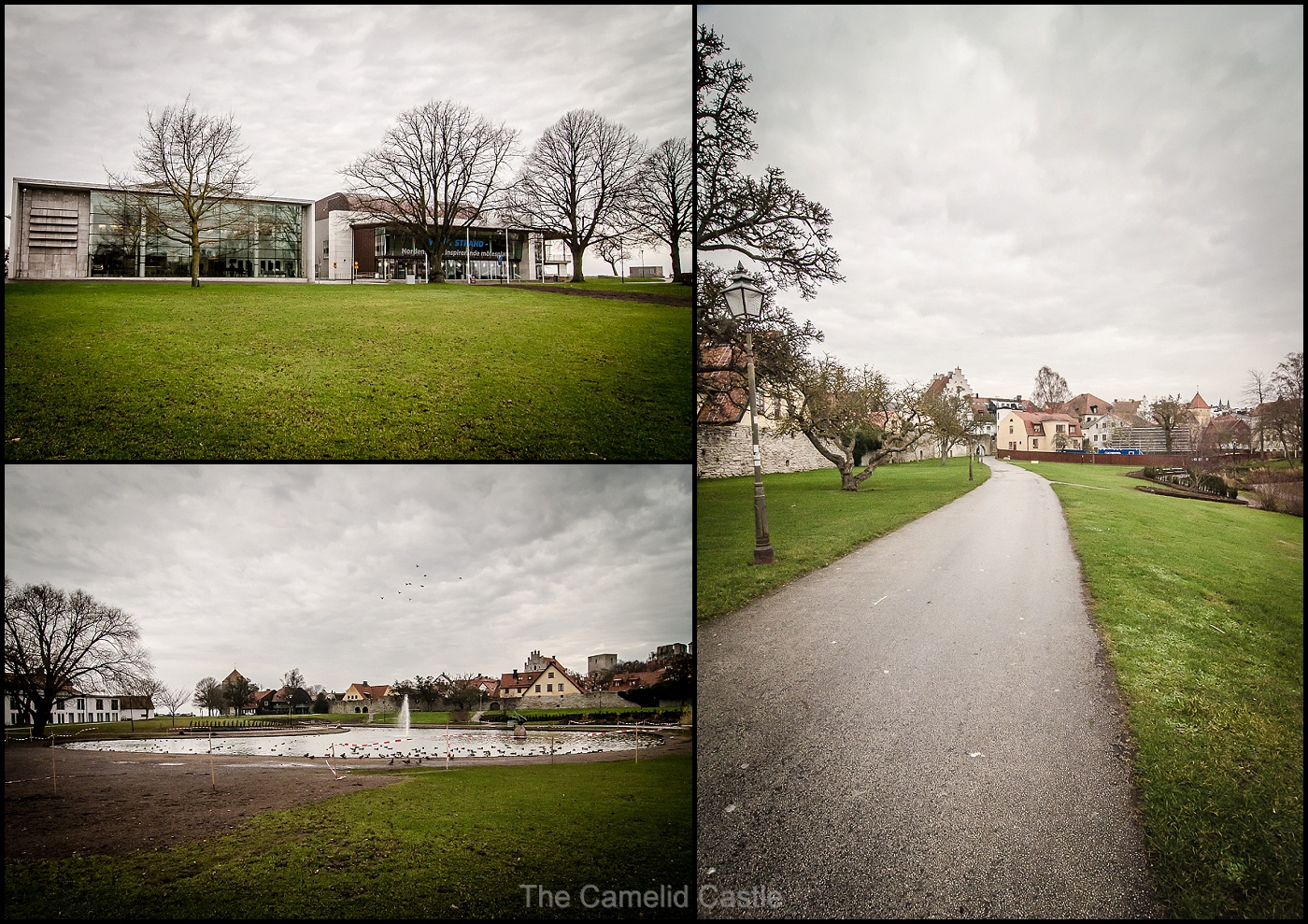 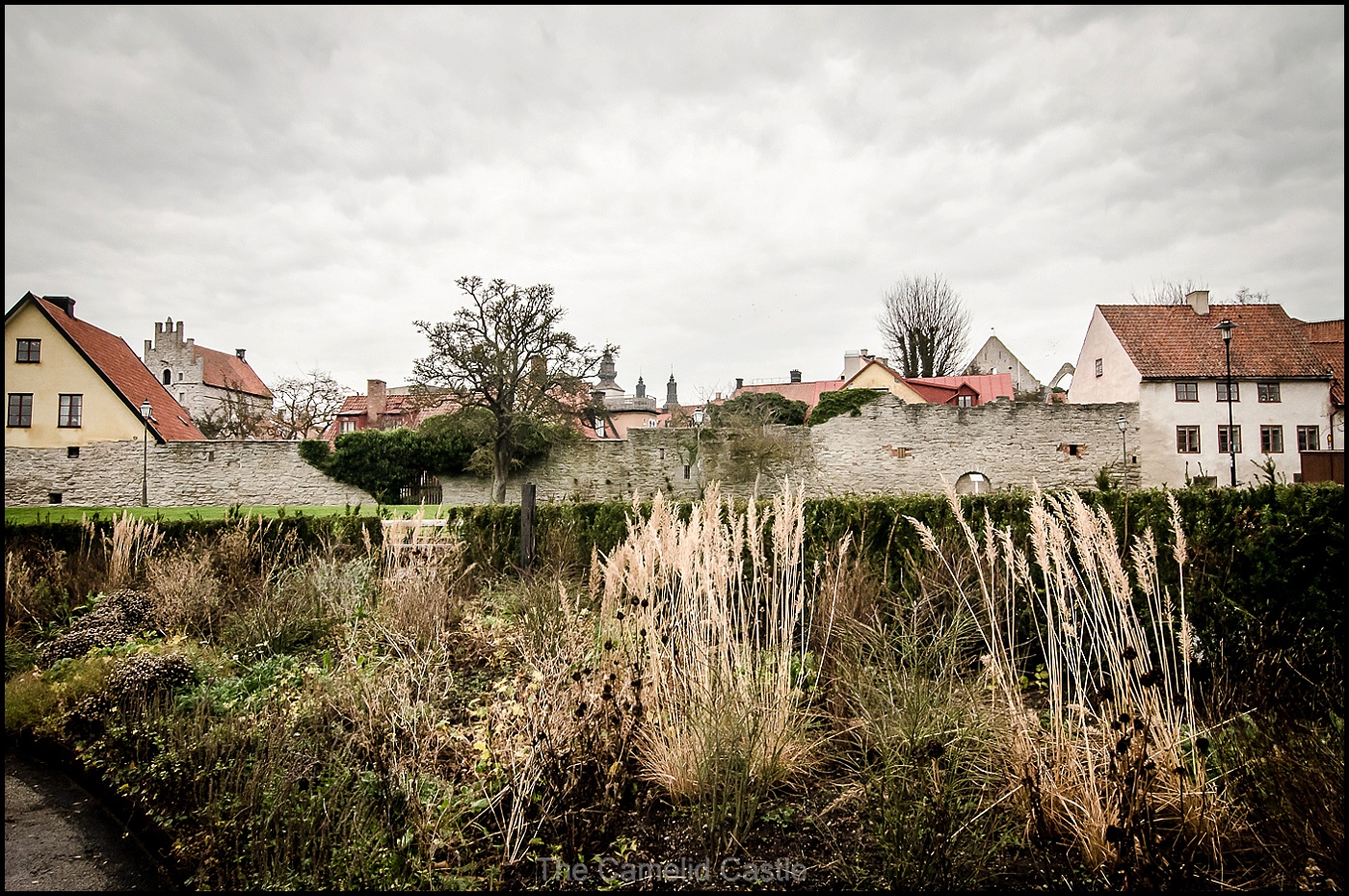 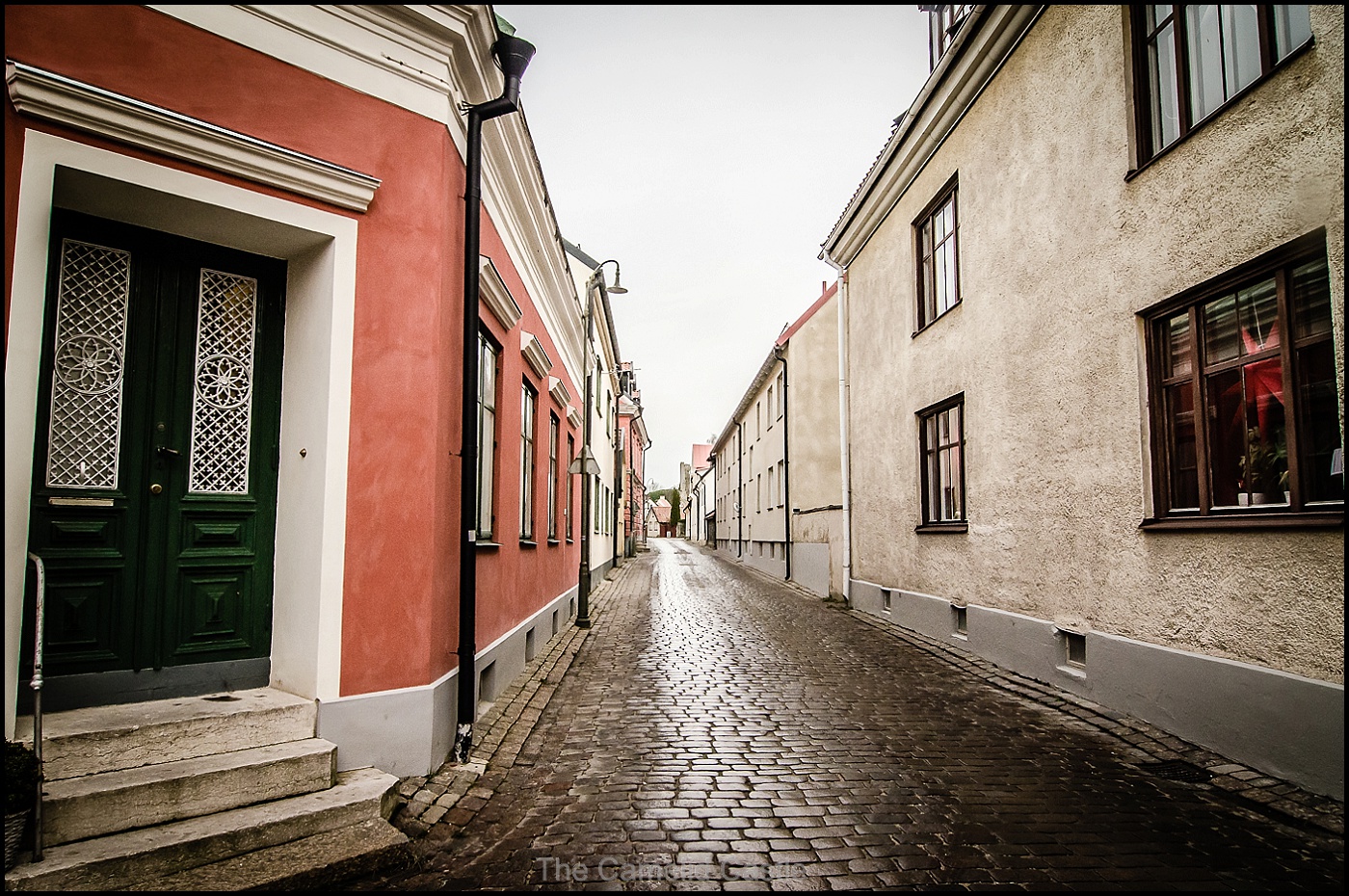 Soren was insisting on walking rather than being carried in the ergo and enjoyed running along the path next to the wall.  He also met a few dogs, his favourite activity! 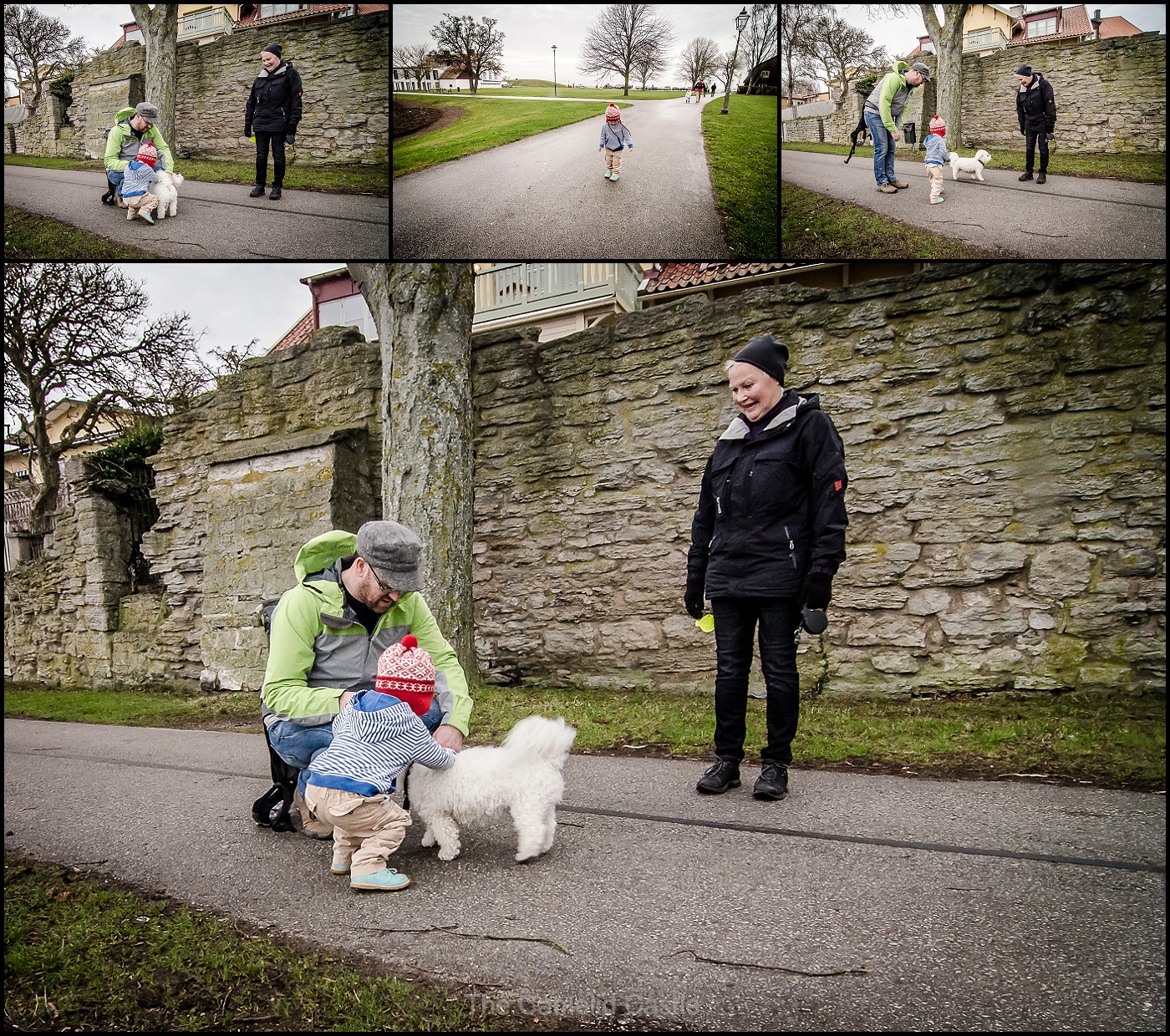 We followed the wall around and climbed a few of the towers (at one point joined by an excessively friendly and very fluffy cat.  It was obviously someones pet cat as it was way too well fed and affectionate to be a stray, plus as Bjorn informed us – stray cats don’t survive Winter in Sweden.  The cat jauntily leaped up and down wooden staircases as we explored parts of the wall and followed us for quite some time trying to gain more pats.  Soren and Astrid thought this was pretty good. 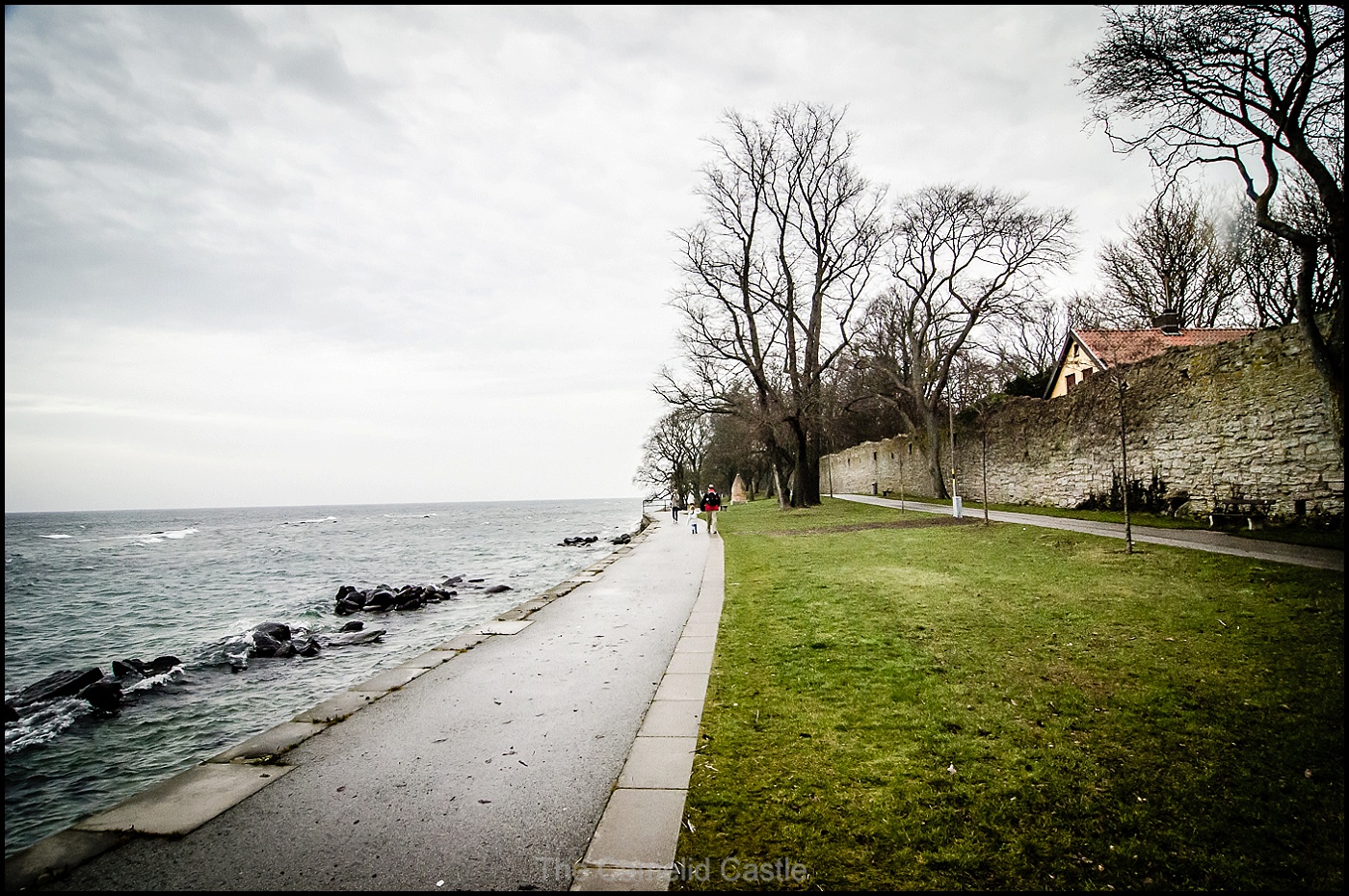 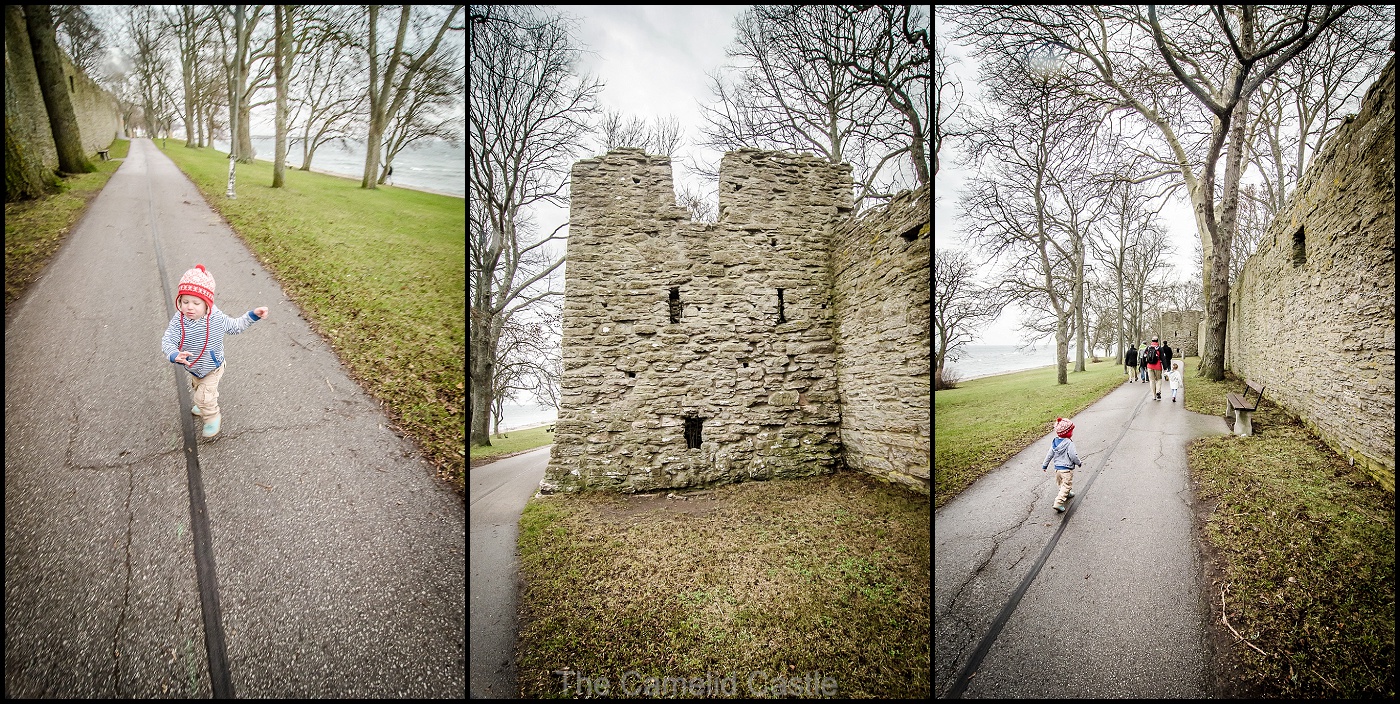 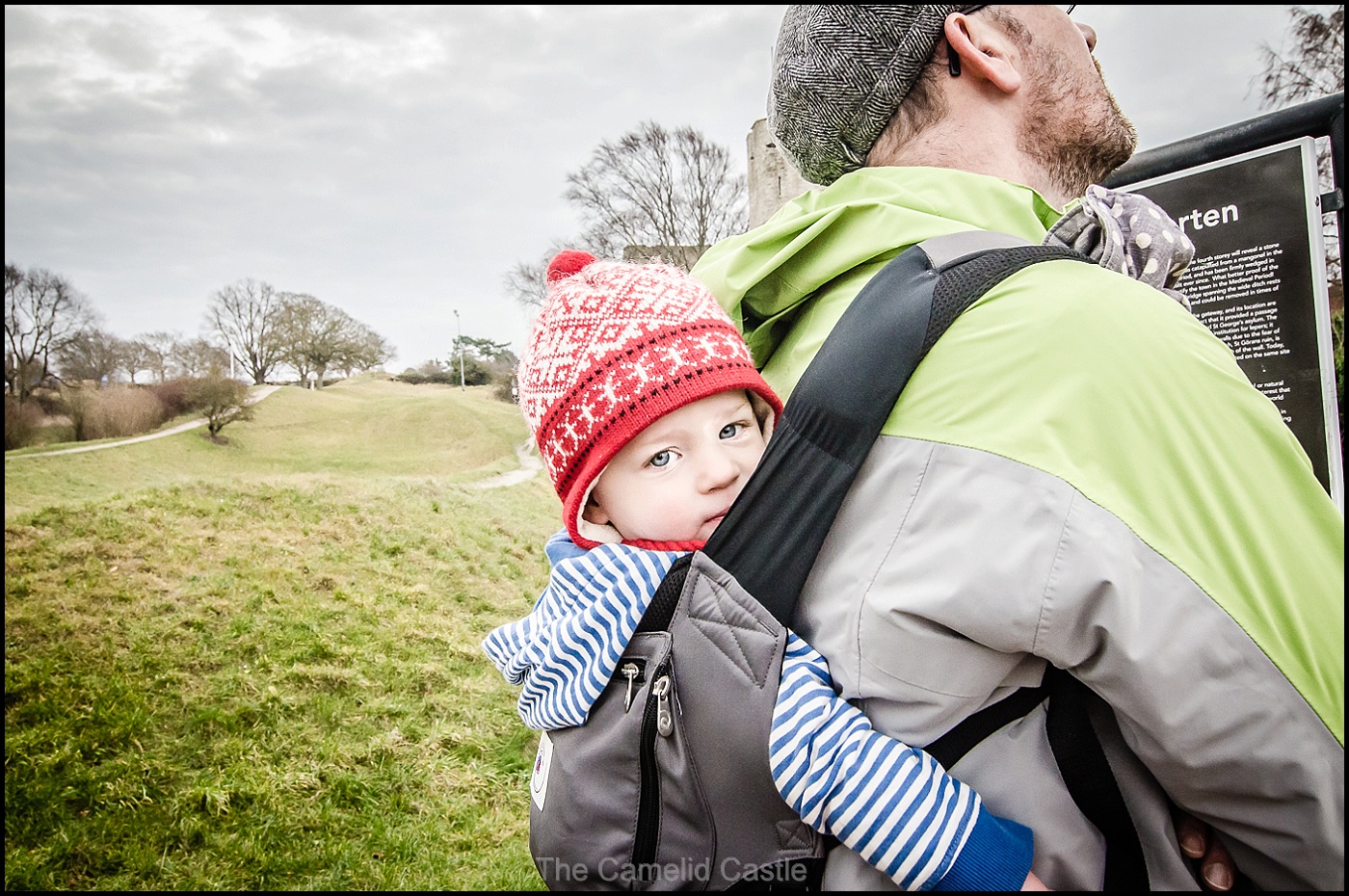 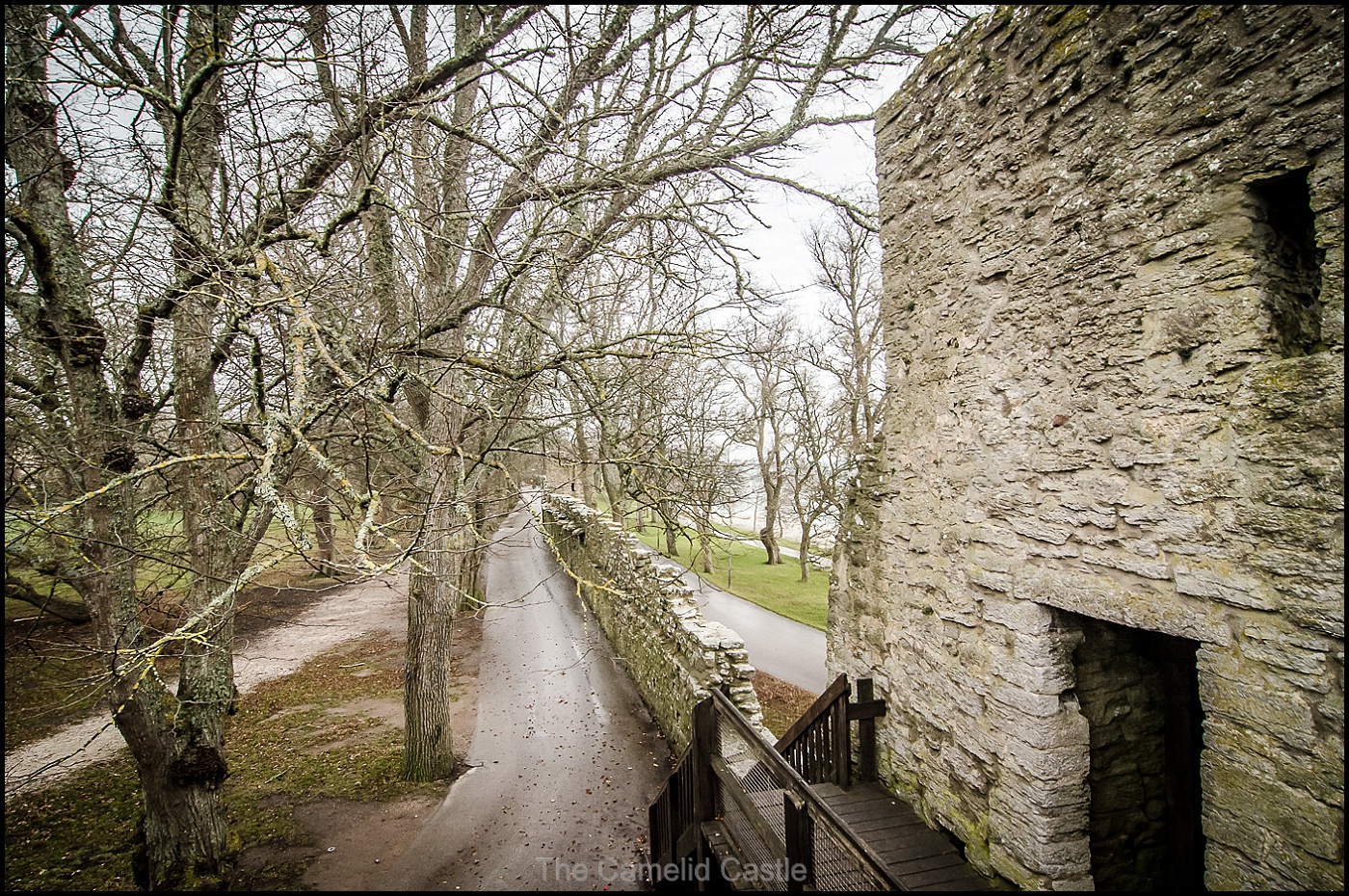 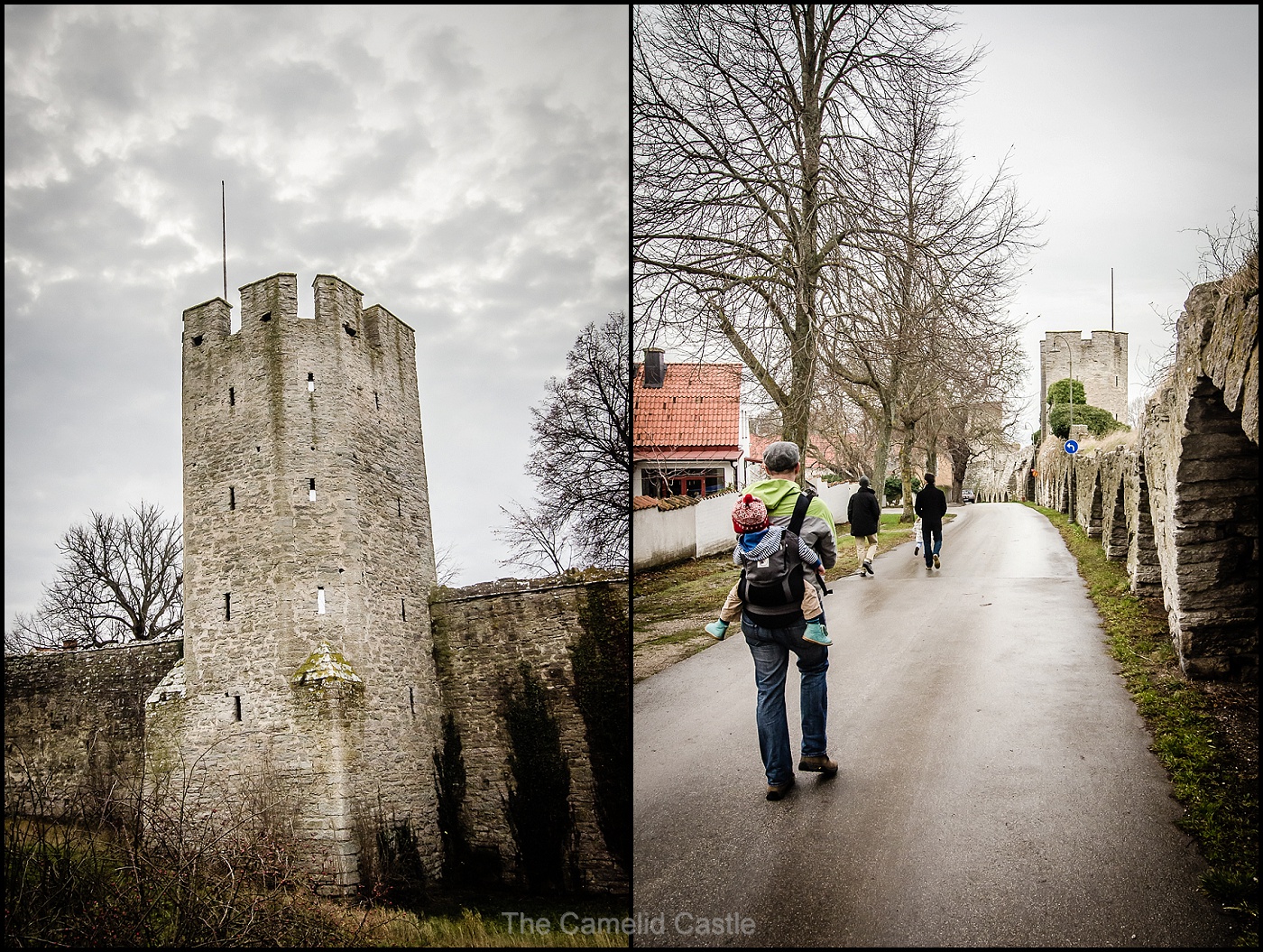 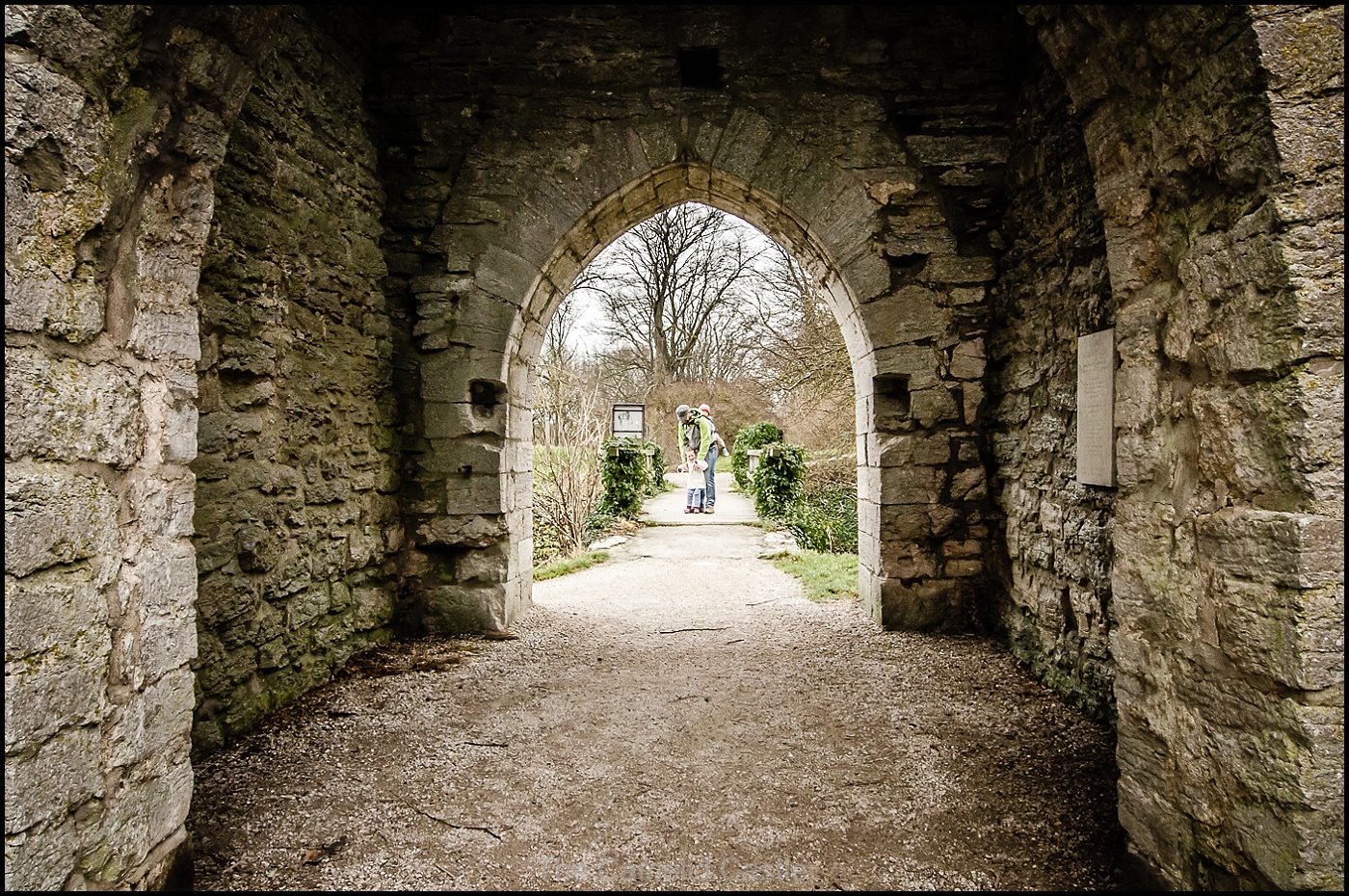 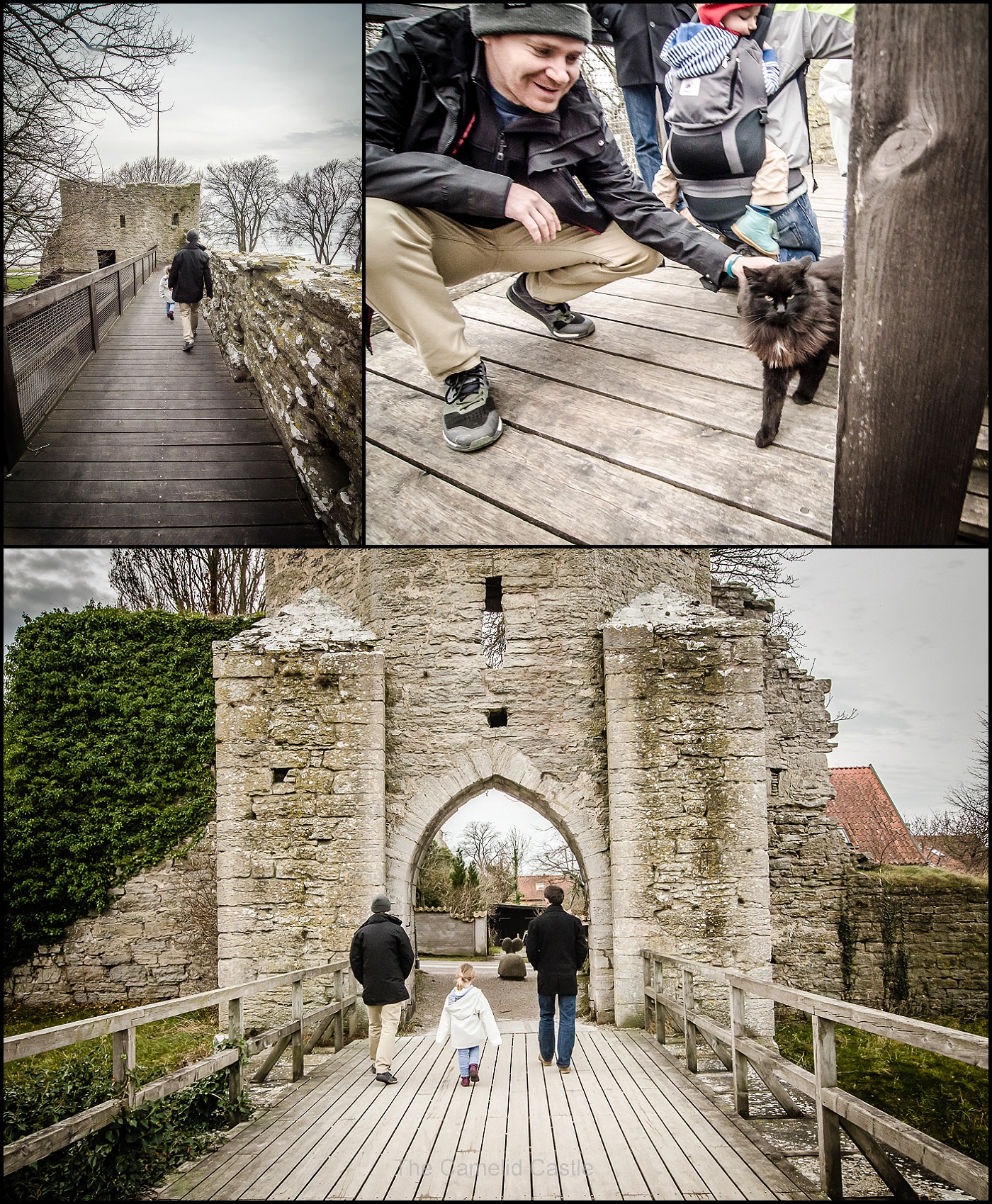 After an hour of wandering around the wall we headed back through the town and visited the Visby Santa Maria Cathedral.

There were also a number of church ruins (11) scattered around Visby. Some are intact and some had no rooves. One was being used (the ruin of Santa Katarinagatan) as an indoor skating rink. 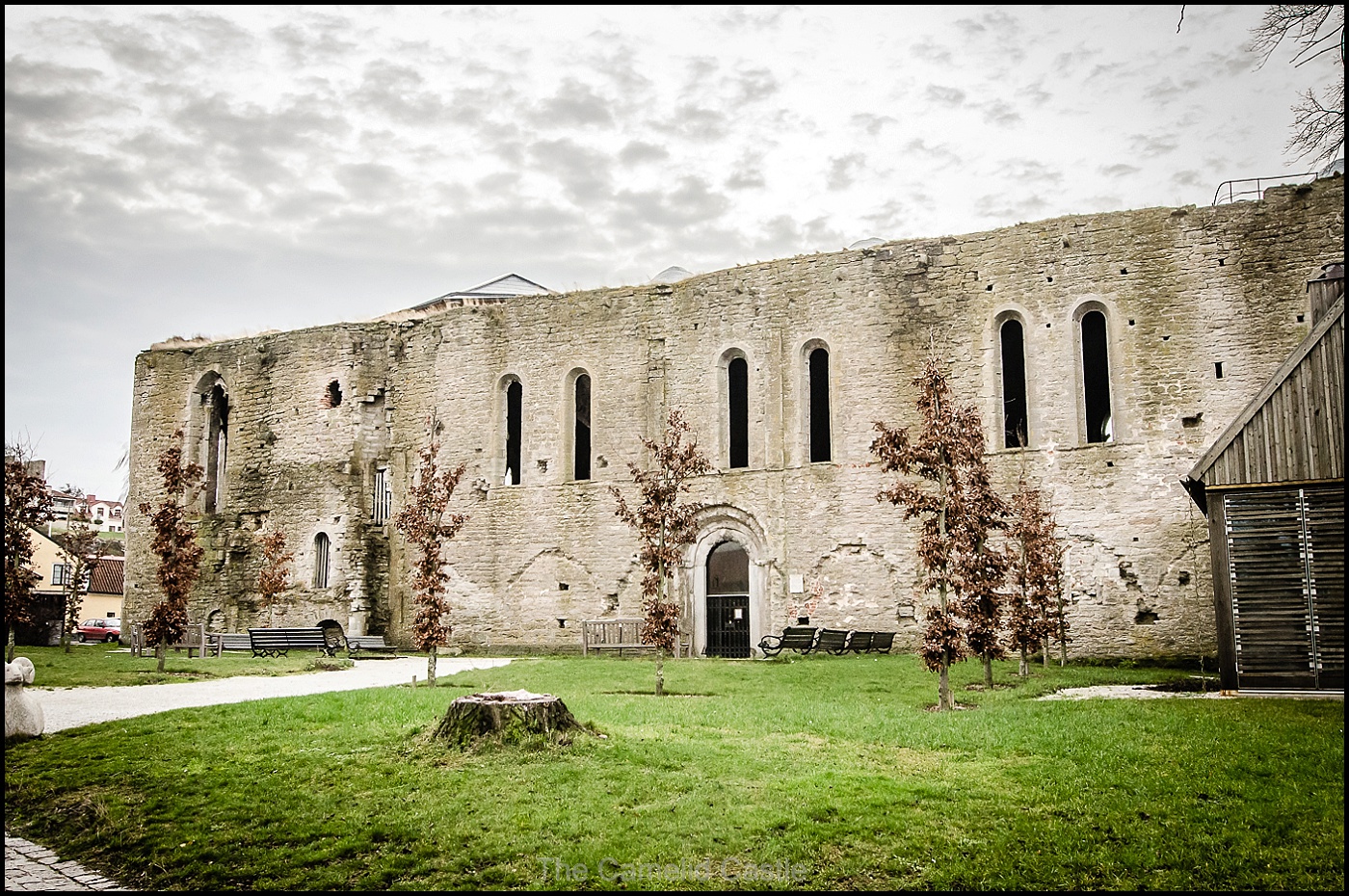 At 11am we headed to the Gotland’s museum to take in a bit more of the history of Visby and the island of Gotland.  Gotland is Sweden’s largest island at 176km long by 52km wide.  It lies in the Baltic sea to the West of the Sweden mainland. There are some other smaller islands that make up the province of Gotland but the island of Gotland is the main one.  The museum has some good exhibits on the history of Visby, life in Gotland over the centuries and lots of info on the Viking times. 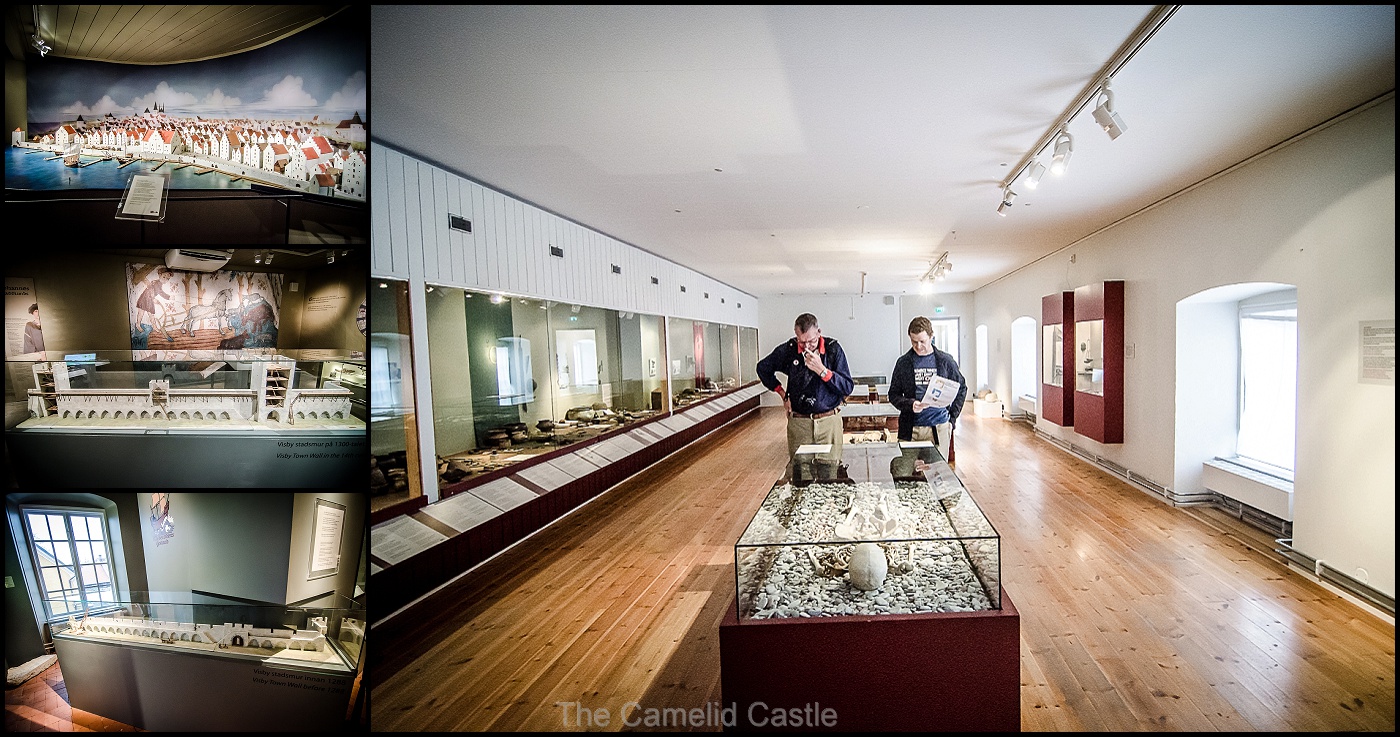 Much to the kids delight it also had an amazing play area, including an area to learn how to tie knots which Mikl mastered (it was designed for kids but he was proud of himself!).  We took it in turns to look after the kids while the adults toured the museum in relative peace. The play area had a kids viking ship, lighthouse, boat, carts with fish and dress-ups. The kids were in heaven playing on the boat and wheeling carts of fish back and forwards to their boat. At some point Gramps turned into a Christmas pirate aboard the ship which also lead to some more amusement. 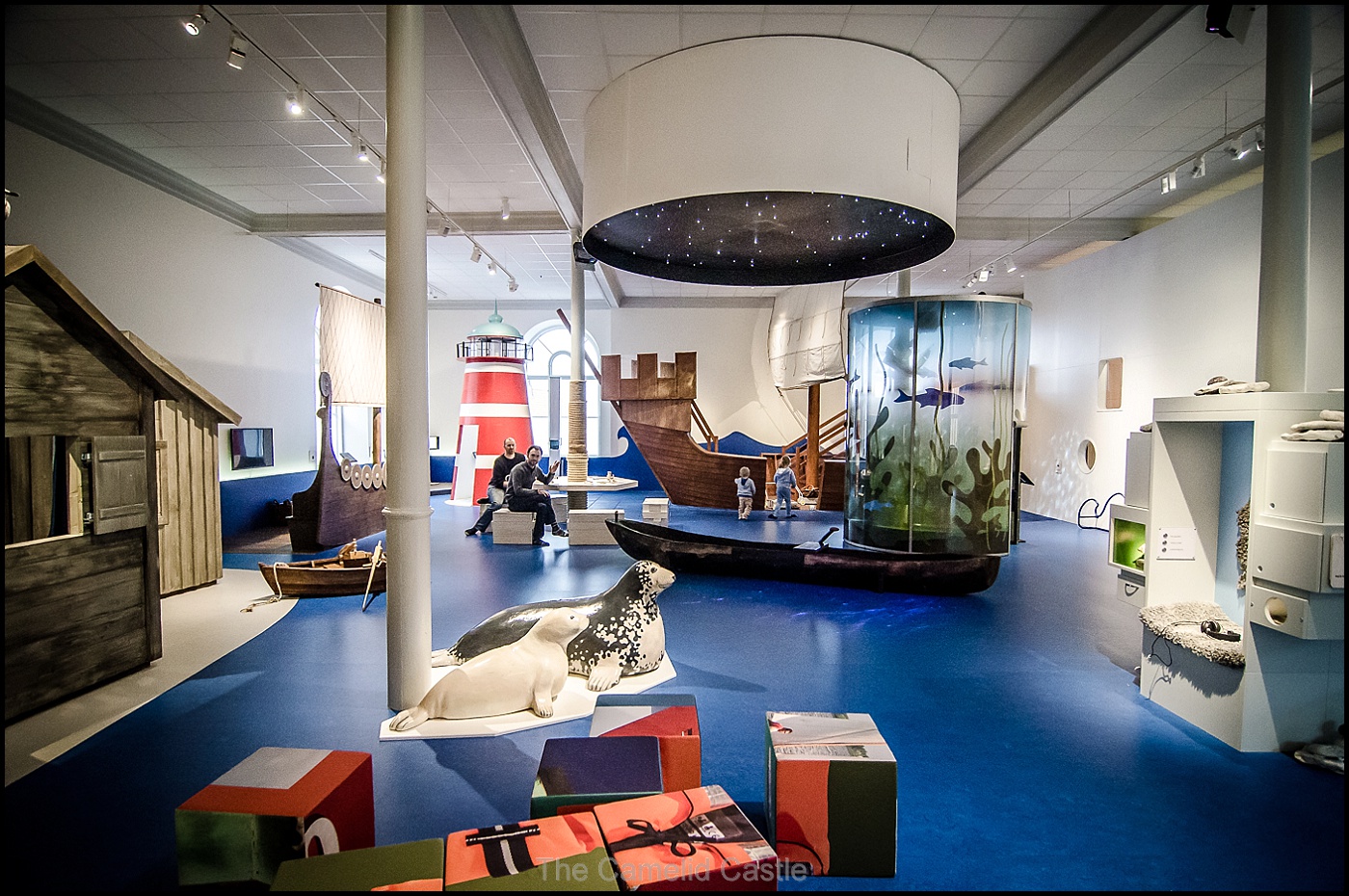 After we’d had a good look at the museum we had to drag the kids away from the play area as it was well and truly food time.  Bjorn had invited us back to his house for a lunch of Swedish pancakes. He lives inside the city wall, actually right on the wall. It was pretty cool to see his (somewhat tiny) house and the kids never say no to pancakes.  The big decision was whether to have them with jam, Gotland honey, syrup, or all 3.

After Soren and I had quickly consumed some pancakes, I ran him back down the hill to the hotel for a nap as he was desperately in need of one.  Astrid stayed with the others for her pancakes and a play with Nelly (Bjorn’s daughter) and their family rabbits and guinea pigs.  She was more than happy playing but was also sentenced back to the hotel for some resting since both kids were tired after lots of big days.  Astrid even managed to fall asleep in the ergo on the walk back down the hill.

We had hoped to get to the Christmas markets before they closed (apparently about 4pm). Being dark a bit after 2.30pm both kids were not keen to get up and moving so it was pretty much 4pm when we got back to the town square to try to find the markets. There were a few stalls open but most had closed for the day, so we just had a quick wander and instead had a look around the town at all the pretty Christmas lights.

We then headed back to our hotel and sat in their lounge area to warm up and partake in some of the free glogg and swedish cookies (pepparkakar)!

Due to the levels of tiredness (and dark) we decided to meet up with Bjorn, Linnea and their kids at 5pm for some dinner.  Since I had requested vegetables they suggested Brooklyn burger which had a vegie burger option made from actual vegetables other than potato. Can you tell I miss vegies?  The kids shared a barnburger (kids burger) and chips and studiously avoided anything that might be considered both a vegetable or salad.  The boys all had other meaty burger concoctions. Mikl and Anto had the double burgers which looked like they were too enormous to eat, but they somehow managed it!  The burgers were all really tasty and the kids had a good time out with the Swedish kids. 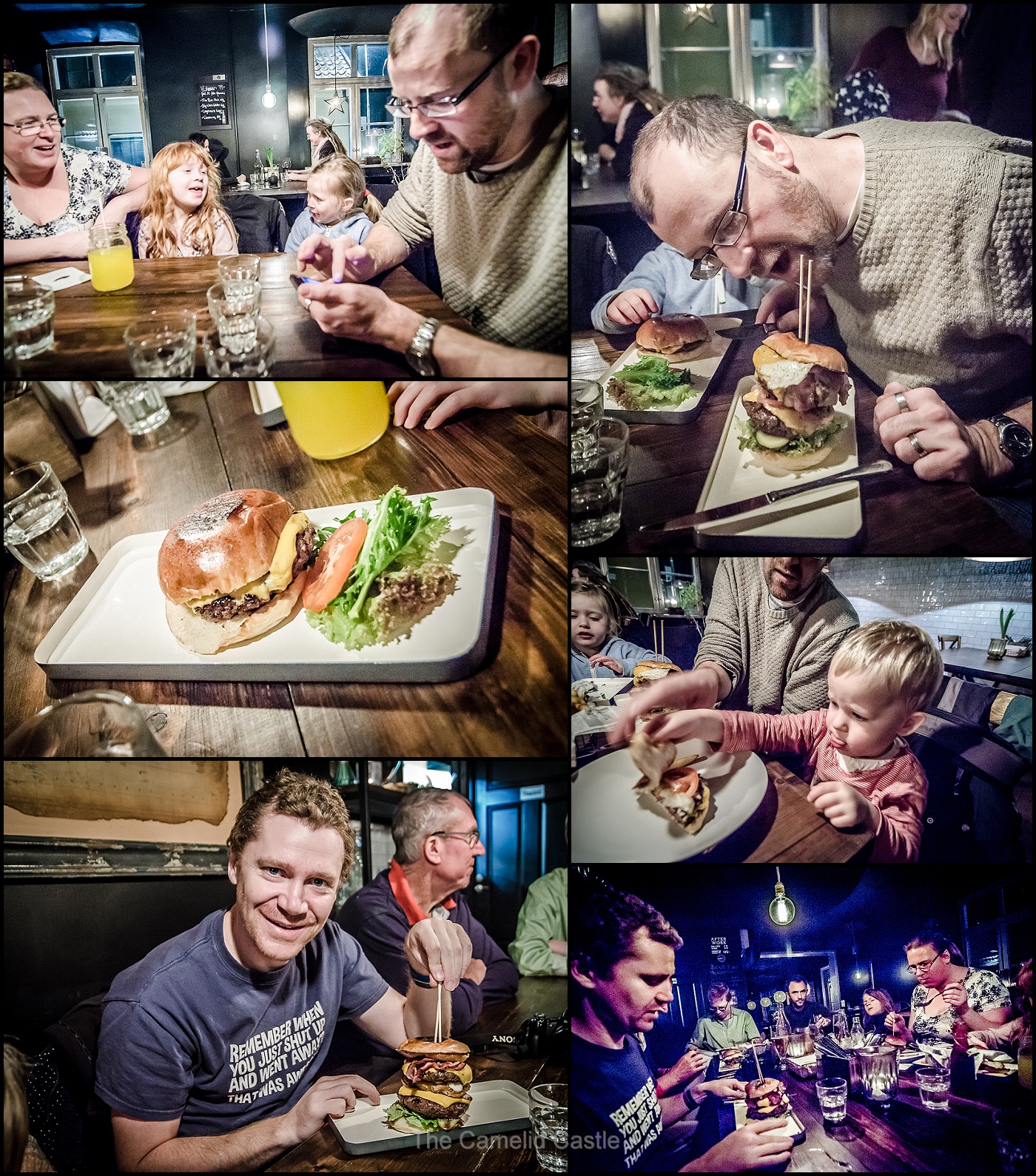 We headed back to the hotel for a not too late night and plans for another day of sightseeing around Visby the next day.

Statistics for the 20th of December 2015 – the temperature in Visby was 8 to 12 degrees with a mean of 10 degrees.  This was close to the record temperature for December. Total walking for the day was 10.75km or slightly more for Anto who ran up and down the hill between our hotel and Bjorn’s house several times.  Very little preserved fish was consumed but Swedish pancakes consumption was high. The next day we had plans for crepes, just in case we hadn’t had enough pancake variants in recent days.