Our Sunday in Visby was spent exploring the docks, windmills, cliffs and beaches of Visby.  There was plenty of time for cakes and hot chocolates and dinner was some enormous crepes.  The kids also had a visit to a pretty neat playground right near the wall (in the dark, of course – this is Sweden in Winter!).

We had another day that we didn’t have to be out early but the kids did not manage a massive sleep-in, well at least Astrid. Soren was still happily sleeping so Anto stayed with him while the rest of us went down to breaky.  Being a Monday, the breakfast room was nice and quiet (until Astrid started her stream of consciousness and disturbed the peace). Soren eventually appeared wearing one of Astrid’s tops as that was what he insisted on wearing (don’t know why we bothered bringing different sets of clothes for them!).  All full of muesli and cheese and meats, we were ready for the day.

The plan for the morning was to explore more of Visby.  Instead of heading around the walled area, we walked down to the docks near our hotel to see all the enormous ferries that were docked. The ferries go back and forward several times a day from mainland Sweden to Gotland.  Apparently in Summer they are very full as Visby is a Summer tourist destination.  They didn’t seem overly full at the moment. People keep asking us why on earth we would go to Gotland in Winter?  It’s clearly not the thing to do! 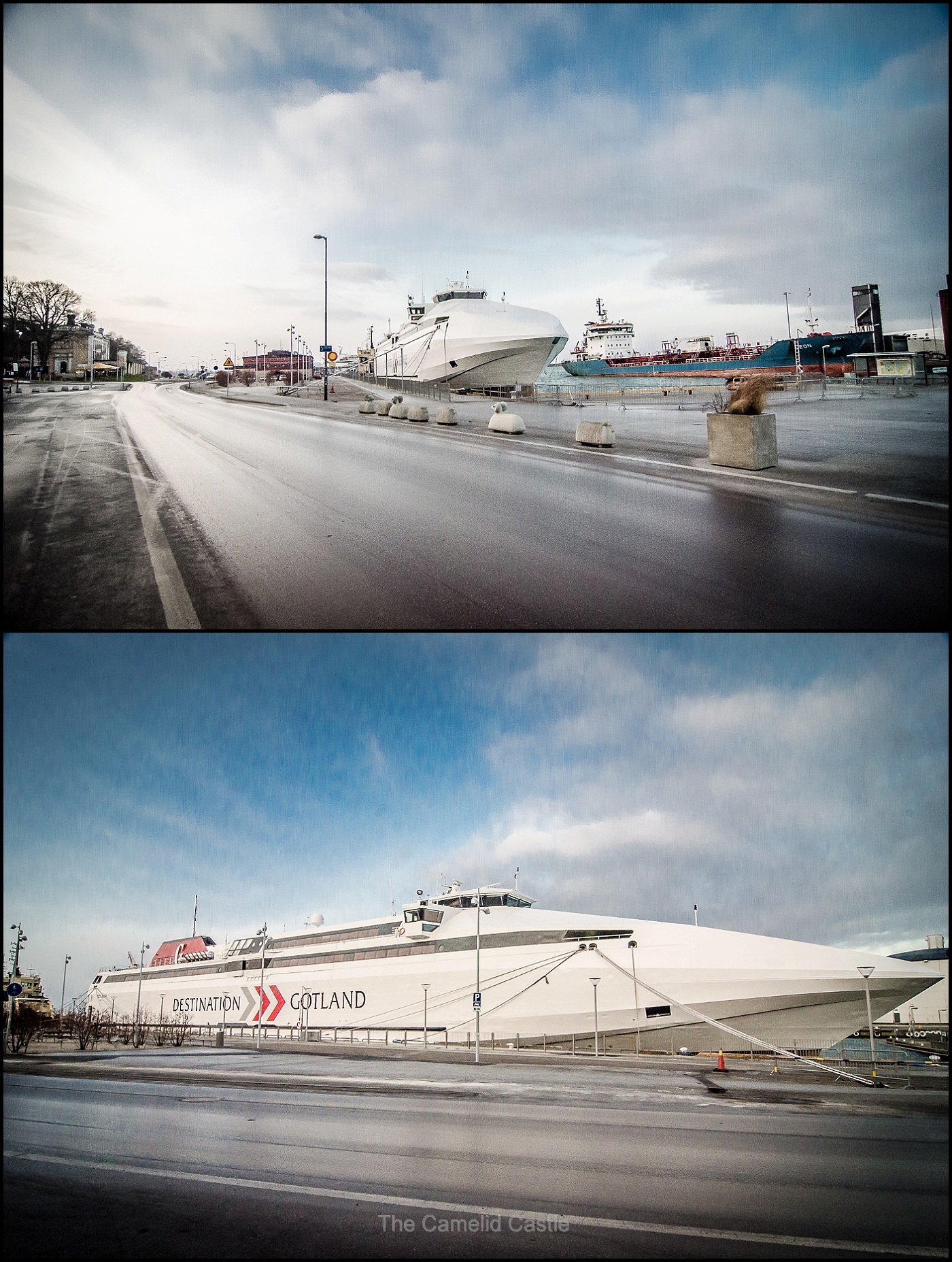 We then followed the dock along and looked at some of the areas of Visby outside the wall.  We happened upon a group of old windmills that were no longer functioning but looked amazing in the low angled Swedish Winter sunlight. 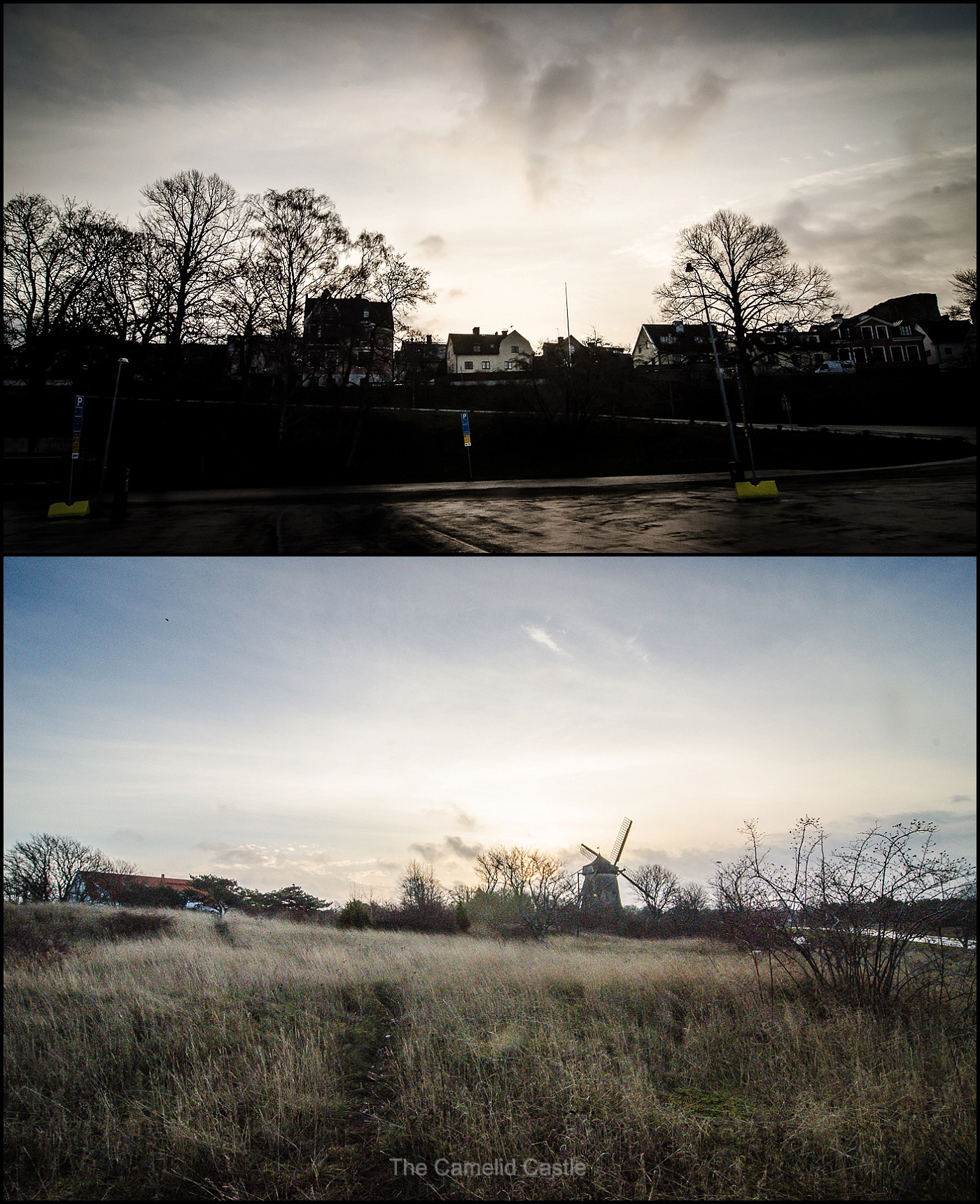 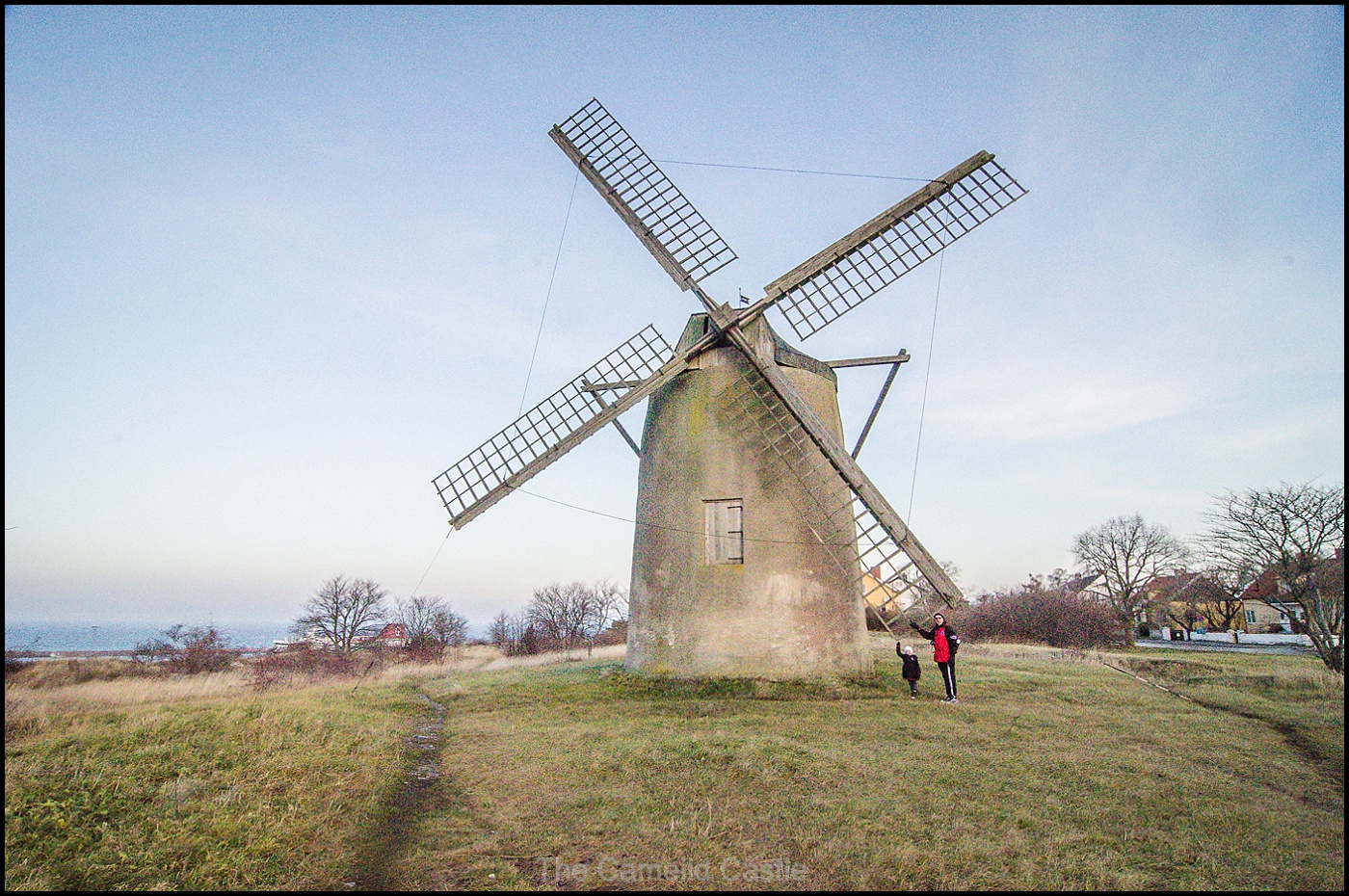 It was quite a mild day weather wise, but the wind out in the exposed areas was very cold.  After we reached the windmills we headed back away from the wind and back towards the walled part of the city.  Soren was happy to snuggle down for a sleep in the ergo.  Once we reached the wall again it was much more protected and more pleasant. As a bonus the shops were now open (it was 11am) so we did a wander through the shops and also located the creperie we planned to have dinner at. 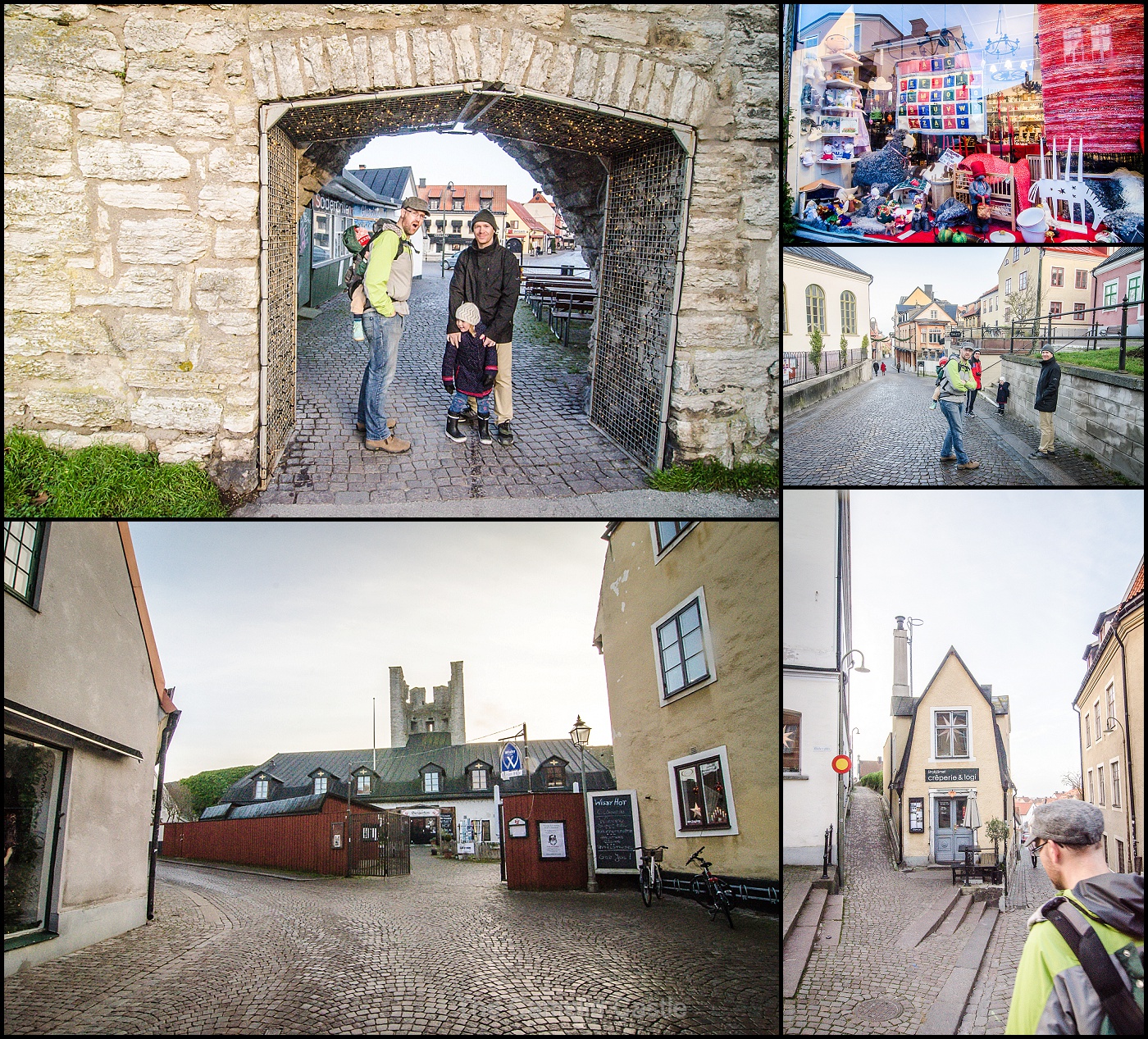 Visby is certainly full of both charm and interestingly shaped buildings! We had fun walking around the cobblestone streets and checking out the old buildings, all with Christmas stars in their windows.  We were however, feeling our carbohydrate and caffeine levels slip so decided to find a cafe to refuel.  There was a really cute cafe tucked just outside the city wall that we ventured in to.  We decided on a fruit flan with vanilla sauce, citrus tart and a chocolate ball (which are made with chocolate, oats and butter).  There was also an enormous hot chocolate that the kids helped me enjoy. 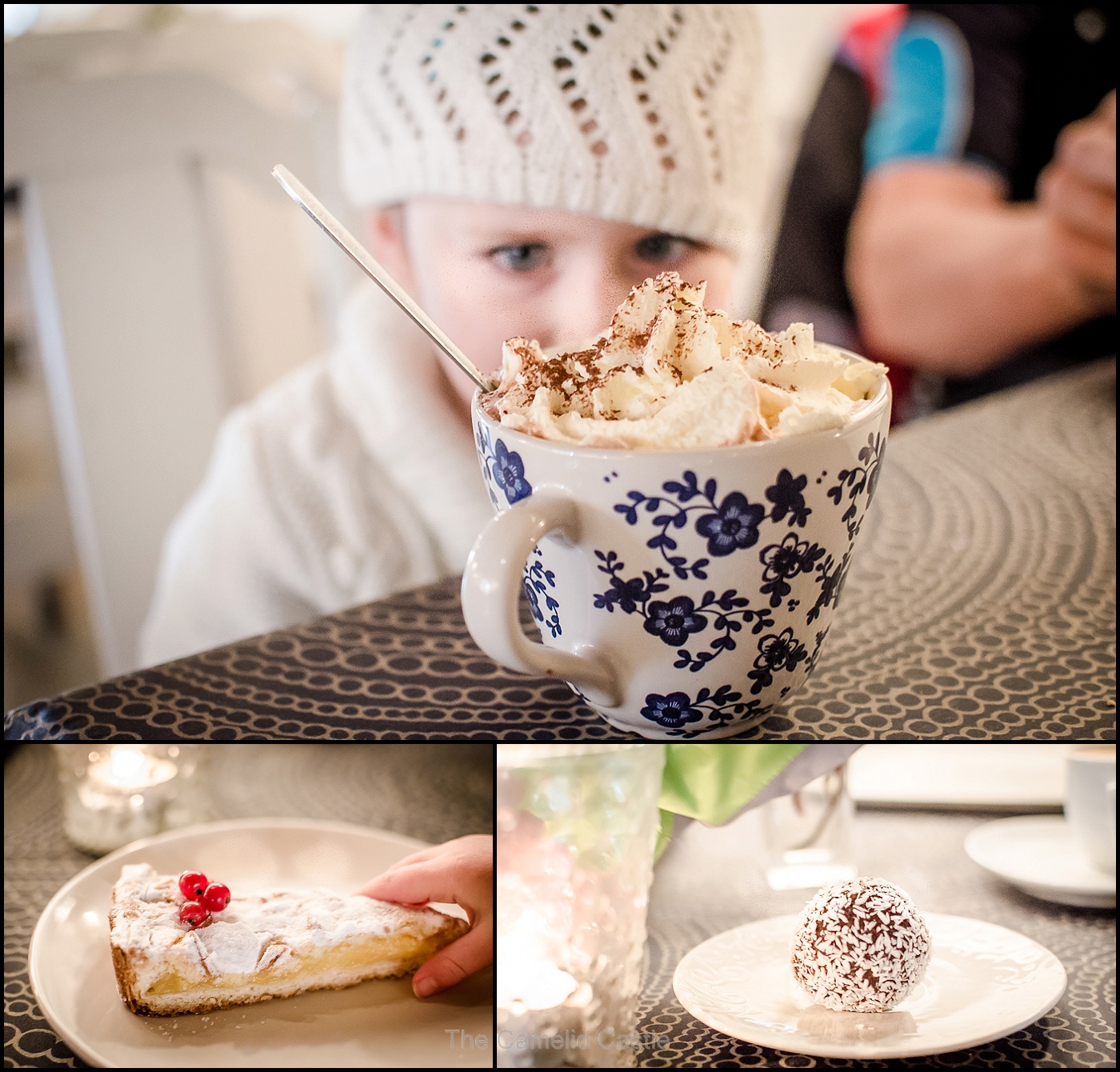 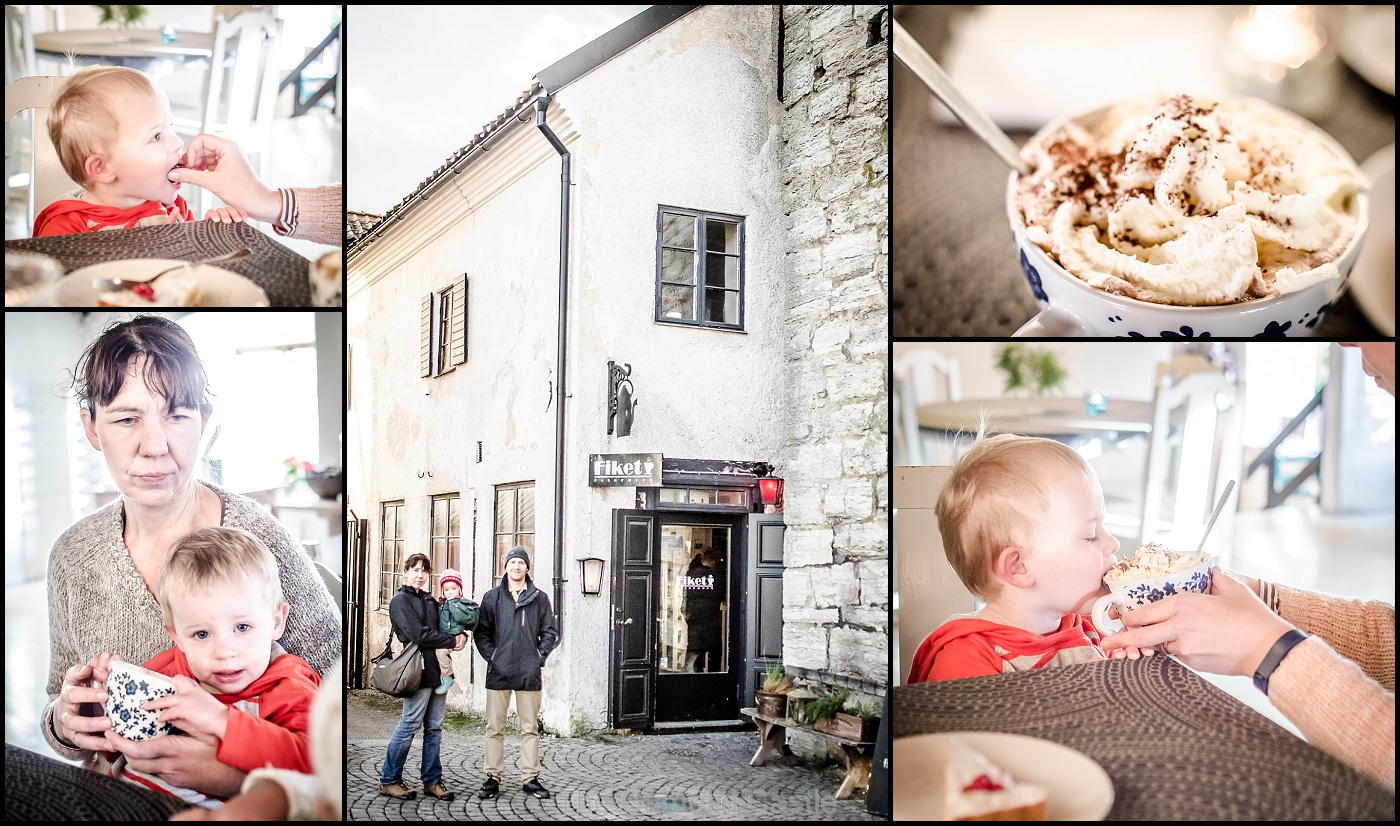 After 10 flat-out days the kids were in need of a rest so we decided to walk back towards the hotel and give the kids a nap.  On the way we had to let the kids have a ride on one of the Gotland sheep statues and have a laugh at the interesting spots cars were parked in. Parking is at a premium within the city and every interesting spot is taken!  It’s amusing watching the cars try to navigate the tiny cobblestone streets. Walking is definitely the better mode of transport.

We did have another beautiful (mostly) sunny day to enjoy Visby. We noticed the Christmas markets being packed up for the year (they only run on weekends in Visby and it was now in the week before Christmas). Not every town holds their markets in front of the ruins of an old church! 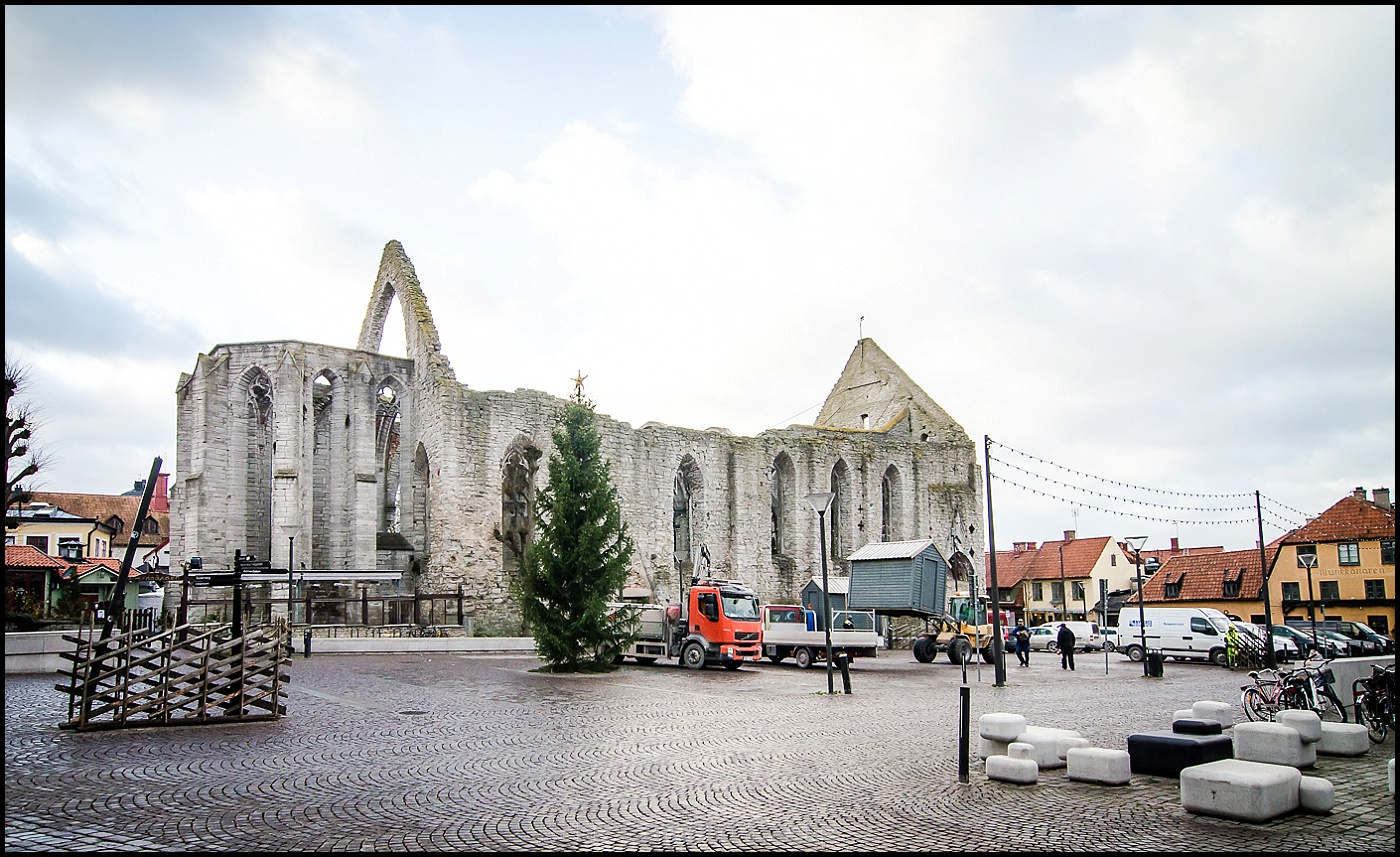 We had picked up some supplies to make the kids bread-rolls for lunch back at the hotel. Anto had volunteered to supervise them resting while Bjorn took Mikl, Alan and I to look at some cliffs.

Since the cliffs were not really a walkable distance, we had to remove the car seats from Bjorn’s car and head out via 4 wheels while Anto got to kiddy wrangle.  We headed out of Visby for a 10 minute drive to the Högklint Naturreservat. The Högklint is a 46m cliff that dips almost vertically to the sea and is made of built up limestone.  Once we reached the cliffs it was extremely windy and we were glad the kids hadn’t come along, as we all had to be quite careful near the edges. 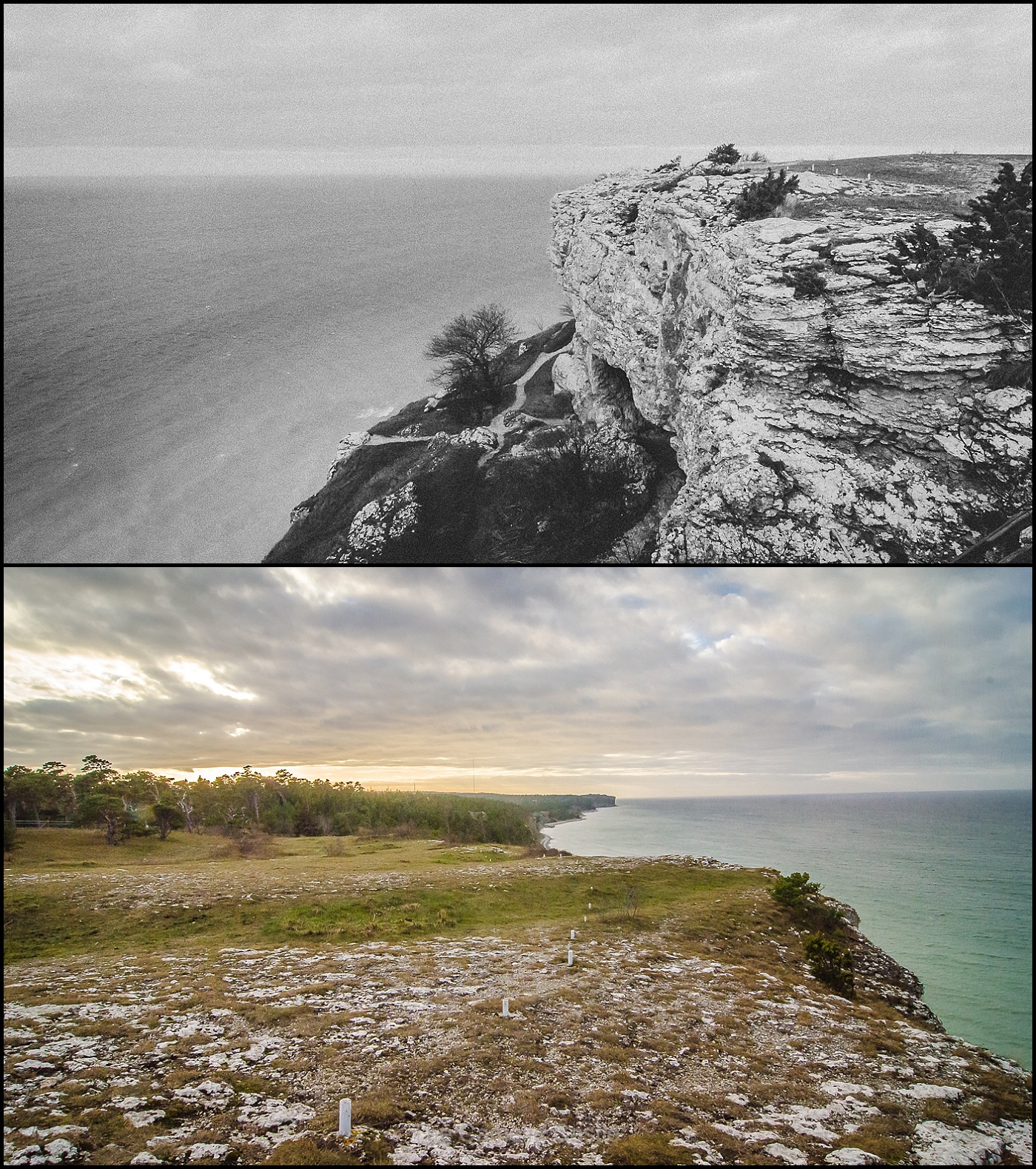 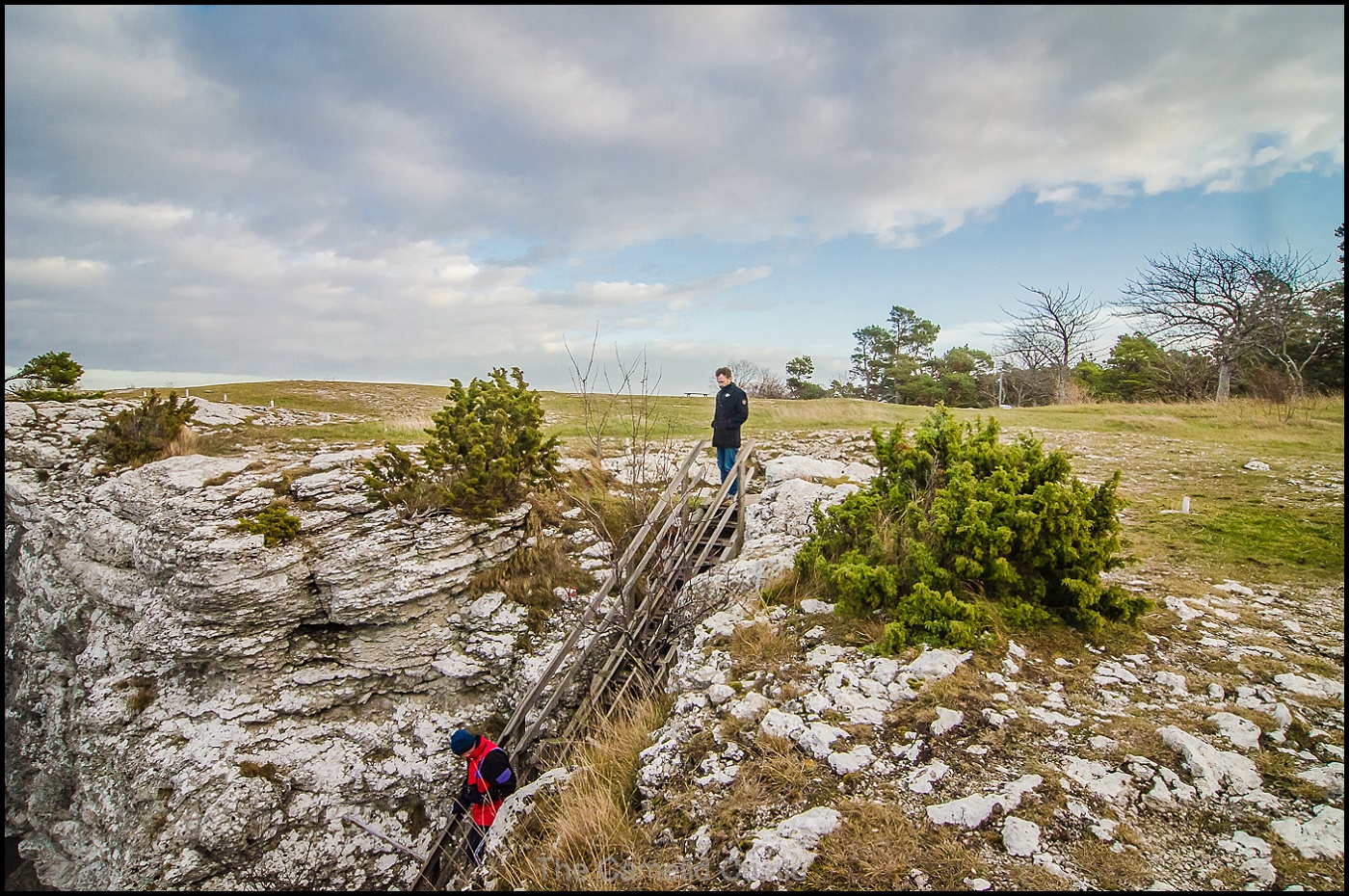 The cliffs were stunningly beautiful and despite the ferocious and cold wind, we decided to head down the long wooden ladder and explore the caves below the cliffs.  We found quite a few common pigeons nesting on the cliffs, which seemed like not a particularly sensible idea.  The water was a very green colour from all the minerals in the rock. We did have excellent views back over Visby from the the cliffs…. 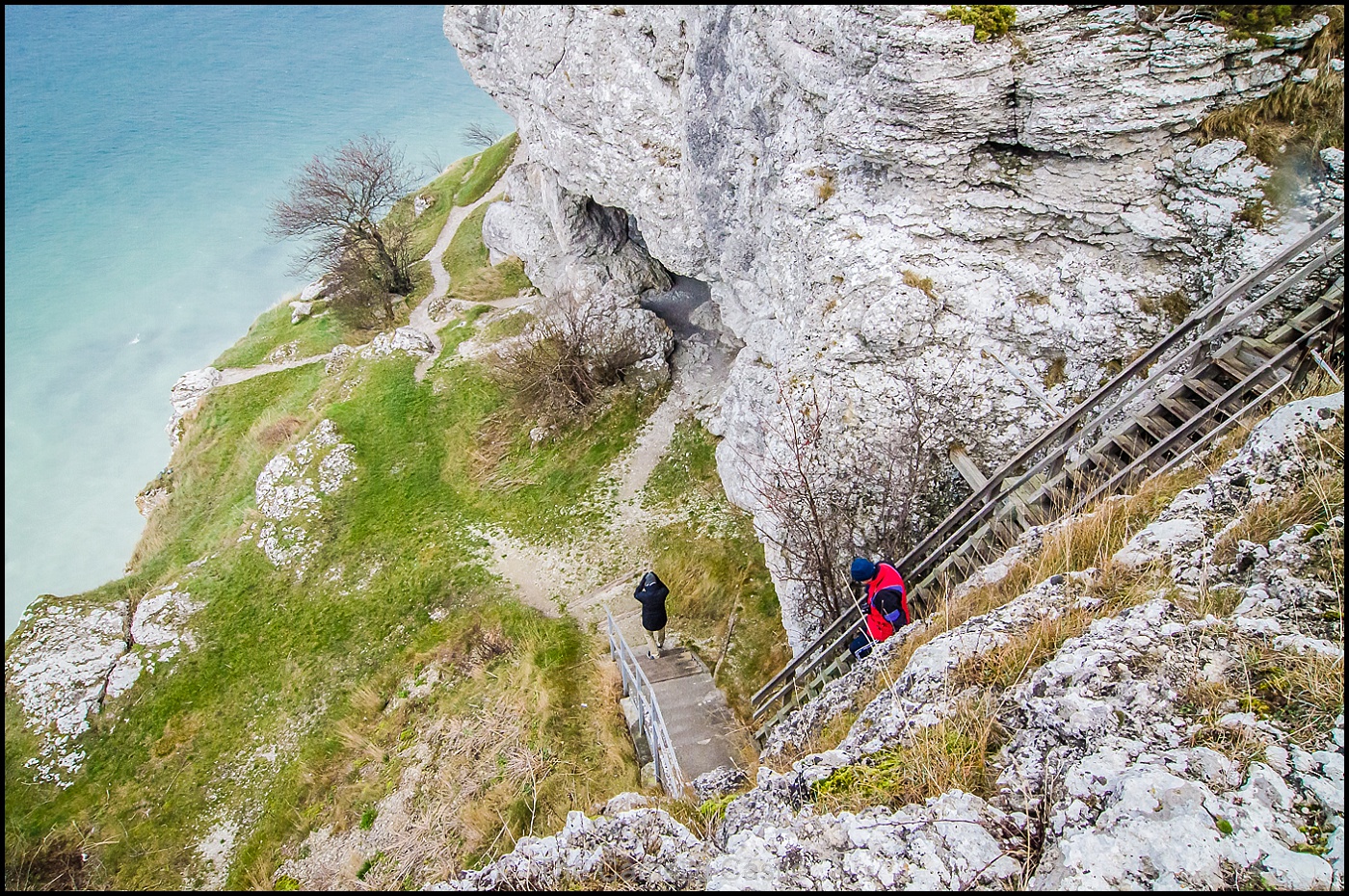 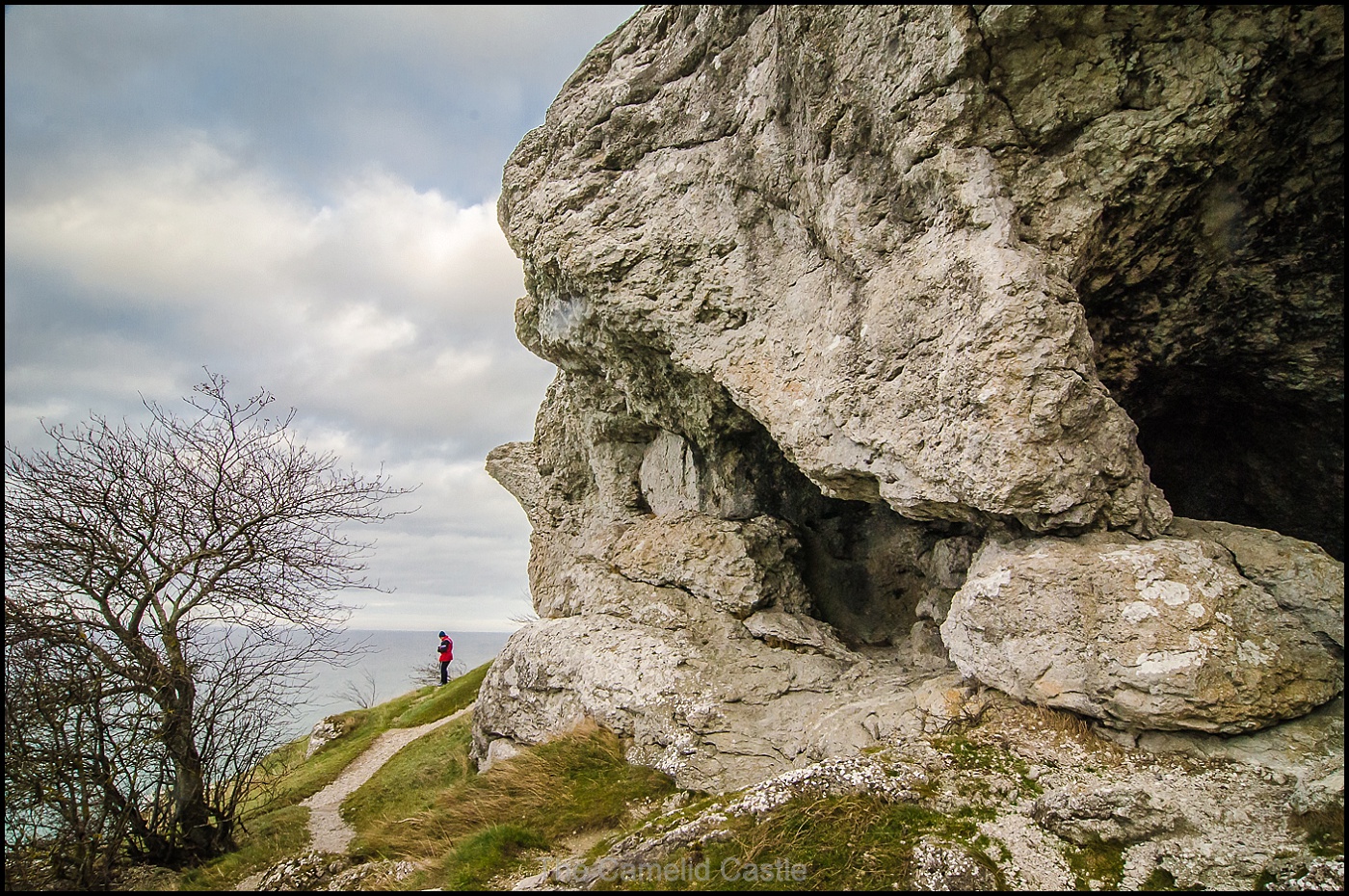 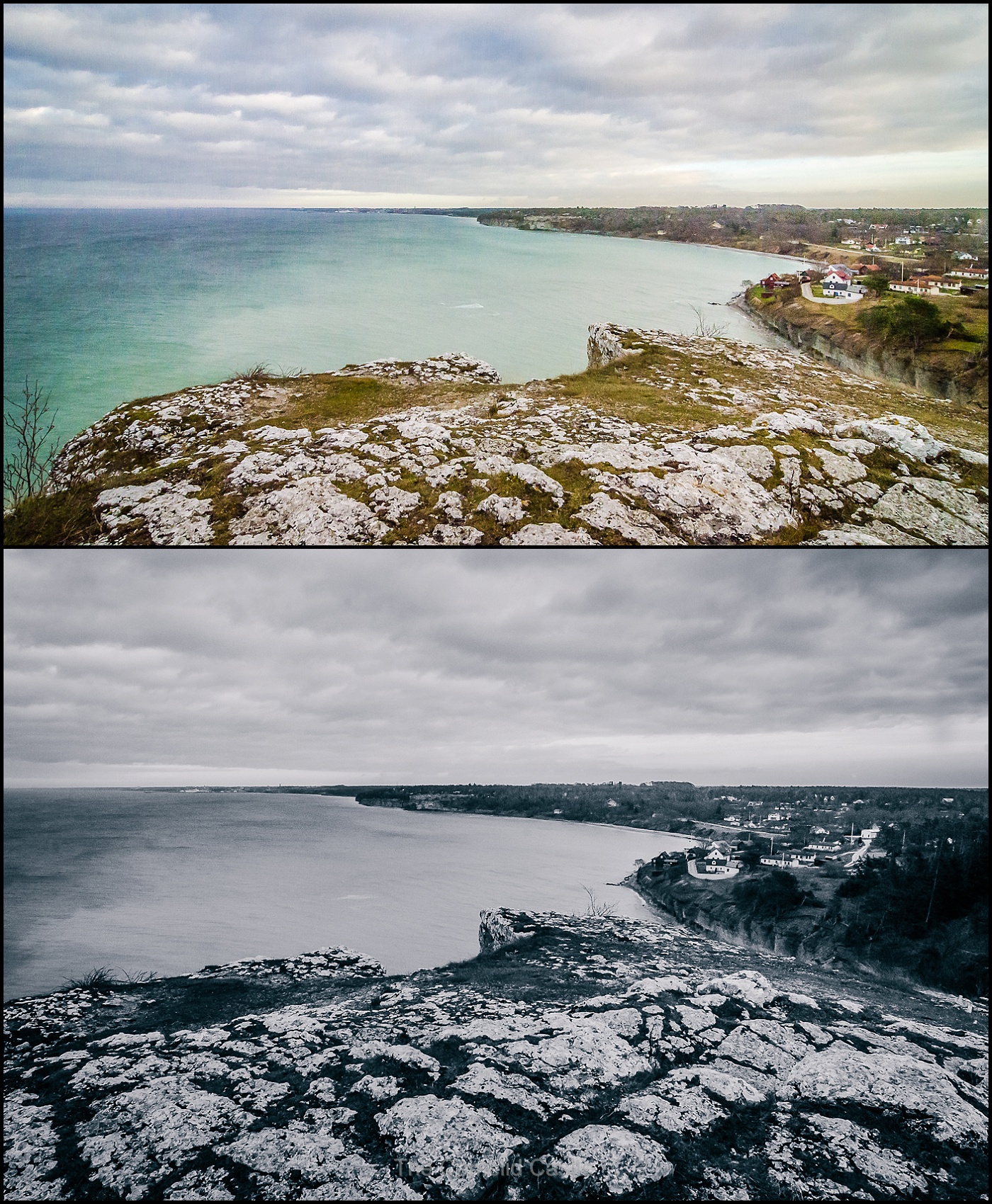 We then jumped back in the cars and headed back towards town, but stopped off at a beach to look for some fossils.  This area is hugely popular in the Summer months and we saw all the Summer houses and rentals (now mostly vacant). Despite it being relatively warm for December, the cold wind meant going for a swim was most definitely not on the agenda!  The beaches are also of the pebbly variety rather than sand, but we found quite a collection of rocks with fossils, including entire fossilized shells.  We took a few examples back to the hotel to show Astrid and Soren. 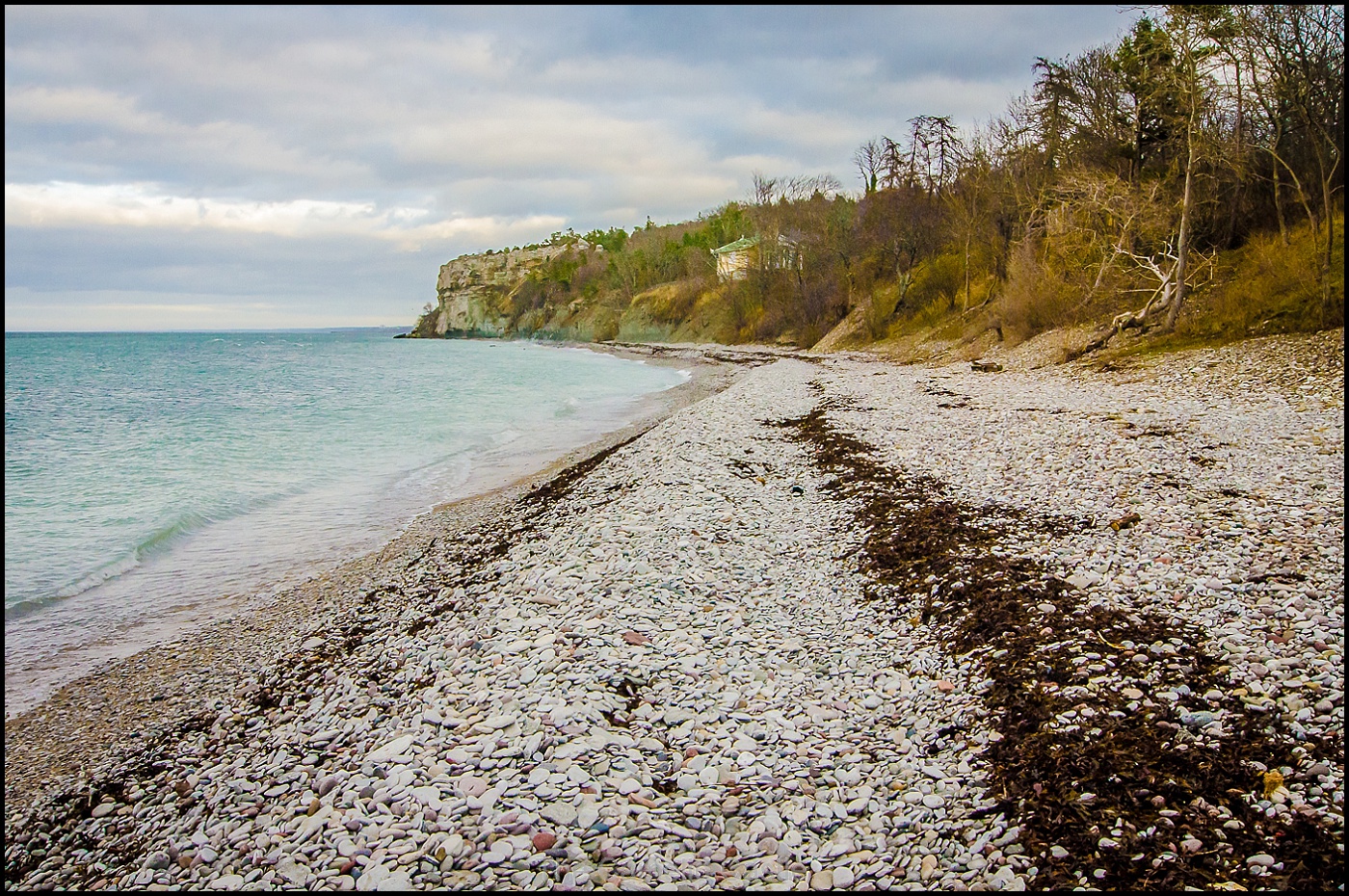 When we got back to the hotel the kids were napping (thank goodness).  Anto headed out with Bjorn while the napping continued.  Once it was almost dark, and at least 2.30pm, we got the kids up for a walk through the rapidly darkening town for a visit to a playground. 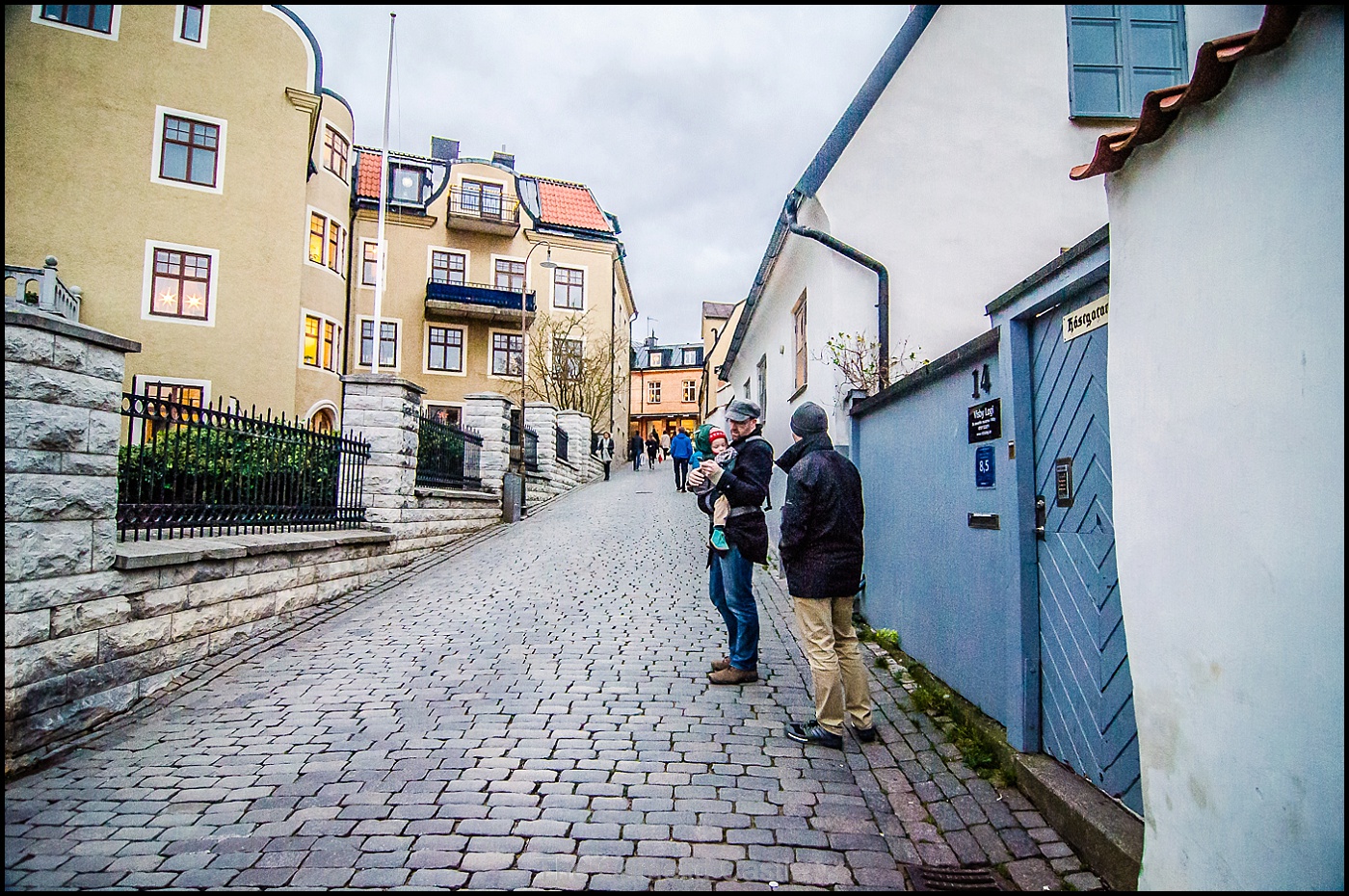 We had promised a play with Bjorn’s kids (well at least Nelly) in a playground.  We headed to a playground just outside the wall and not too far from their house.  Kids here are pretty lucky getting to play with an amazing medieval wall just next to their playground! It was getting pretty dark and wall looked lovely all lit up. 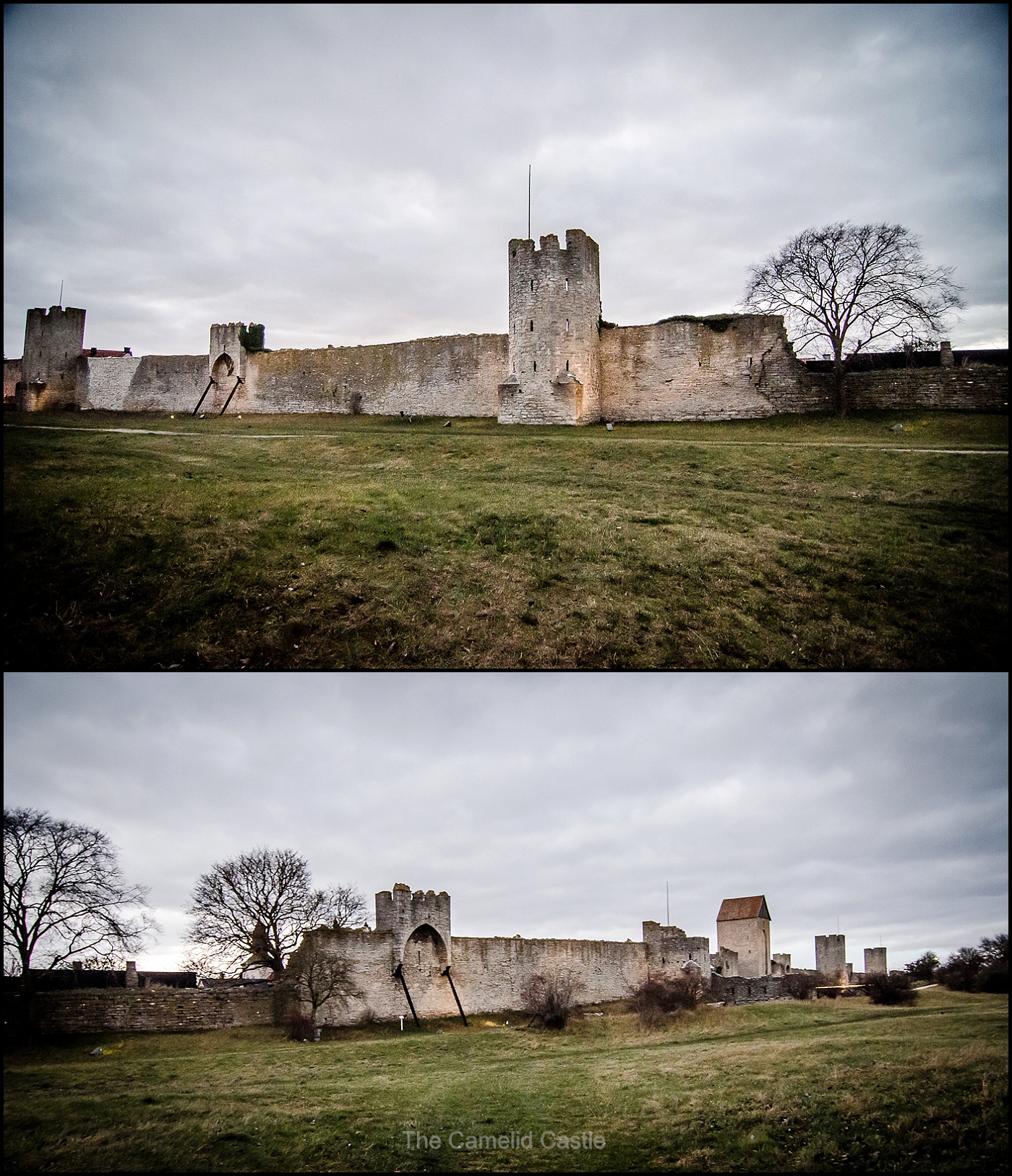 The kids had fun in the pretty good playground.  The see-saw was a hit, even if it was the adults having the most fun!

While the kids (big and little) were playing, I wandered off to take some long exposures of the wall, in the rapidly diminishing light. Nothing like crawling around in the grass with a big tripod, wearing black clothing in the dark. No one paid me a great deal of attention though, and the others did manage to catch up to me once it was deemed too dark for the playground (at about 3.3opm). 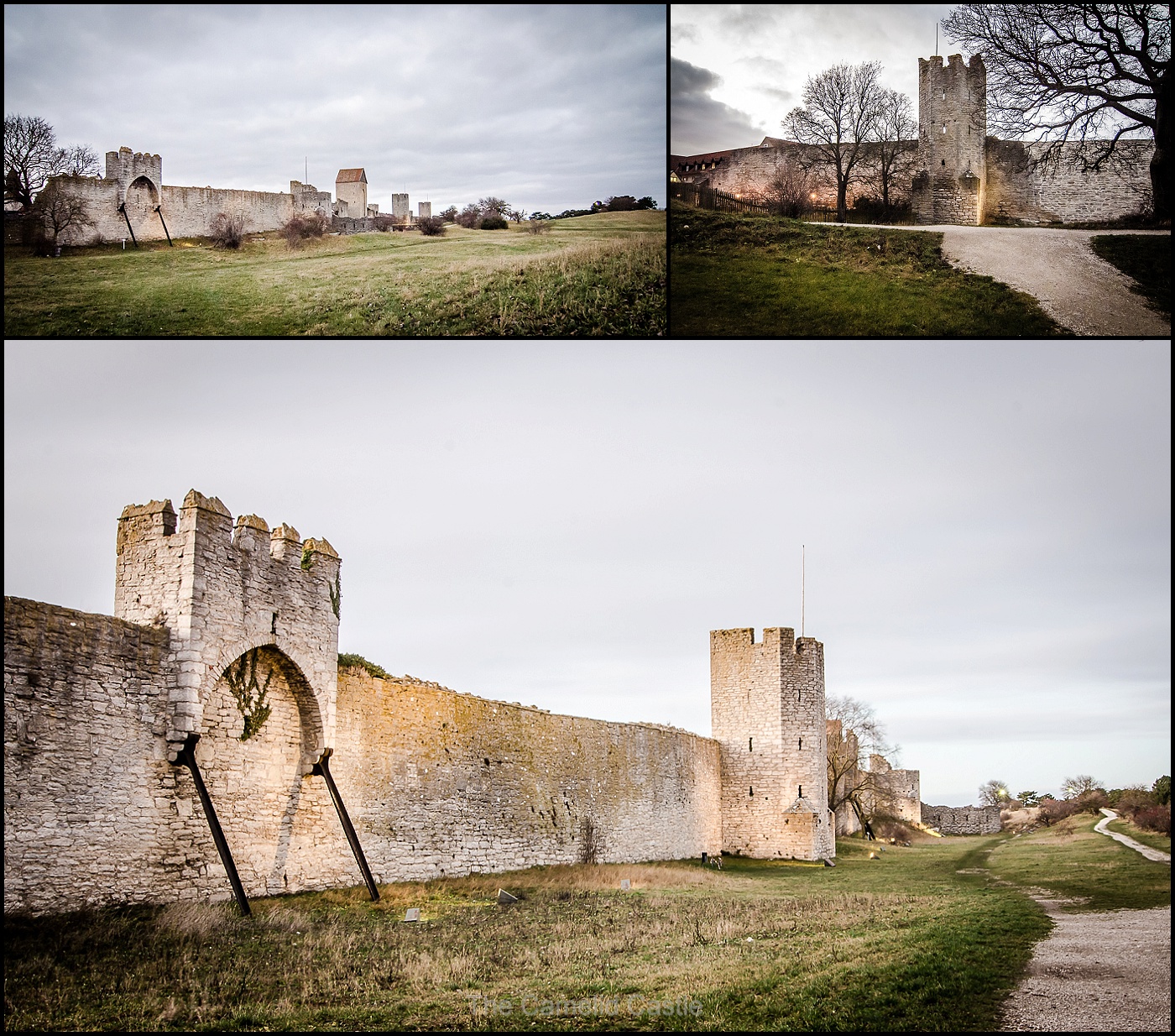 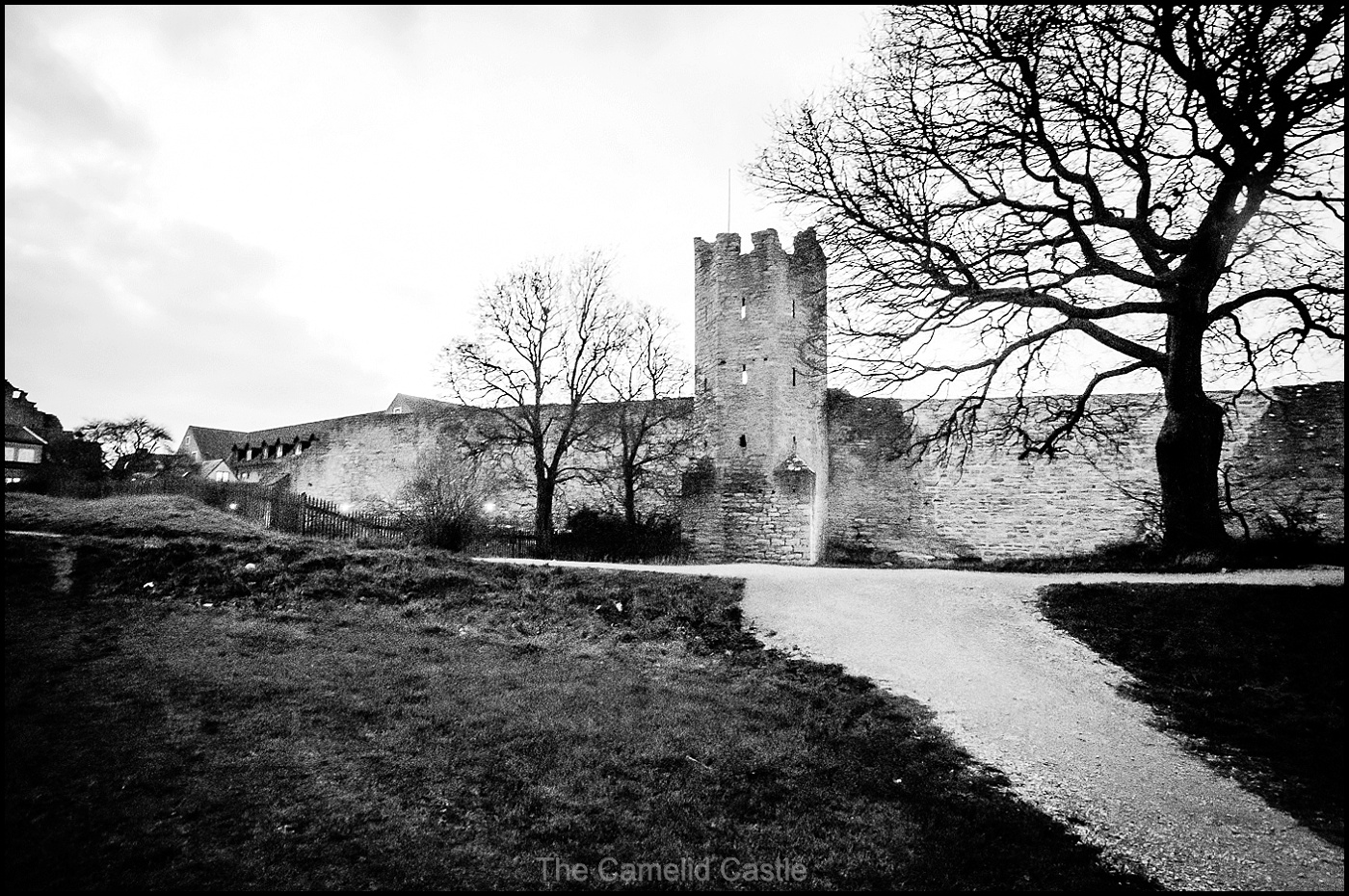 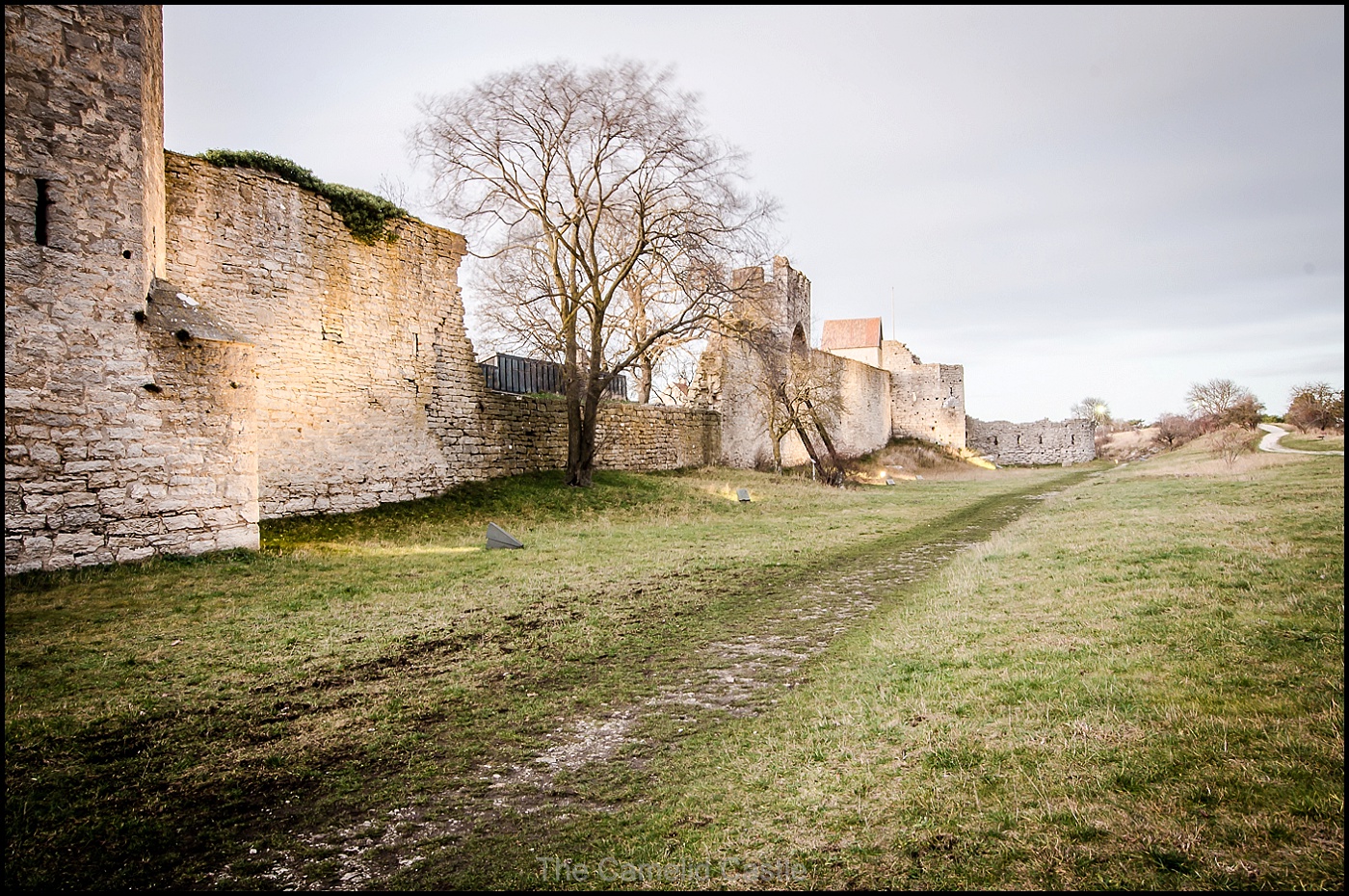 Since it was now definitely too dark for unlit playgrounds, but awhile until dinner, we headed back to Bjorn’s place to let the kids play and have a chat.  Astrid was more than happy to play tea-parties with Nelly and Soren had decided that the Swedes were unlikely to eat him, so played for a little too. Once it got to the more appropriate dinner hour of 5pm (the afternoon passes slowly when it’s dark so early!) we headed off to the creperie.

We had convinced the kids they had to eat something savoury to get dessert, so we ordered them a ham, cheese and egg crepe.  I had actual vegies in mine (fetta, tomato and spinach) and Mikl had a salmonly concoction.  The other boys had hearty meaty crepes, washed down with some Gotland beers.  The crepes were enormous and rather tasty.  We shared a hazlenut, banana and cream crepe for dessert. 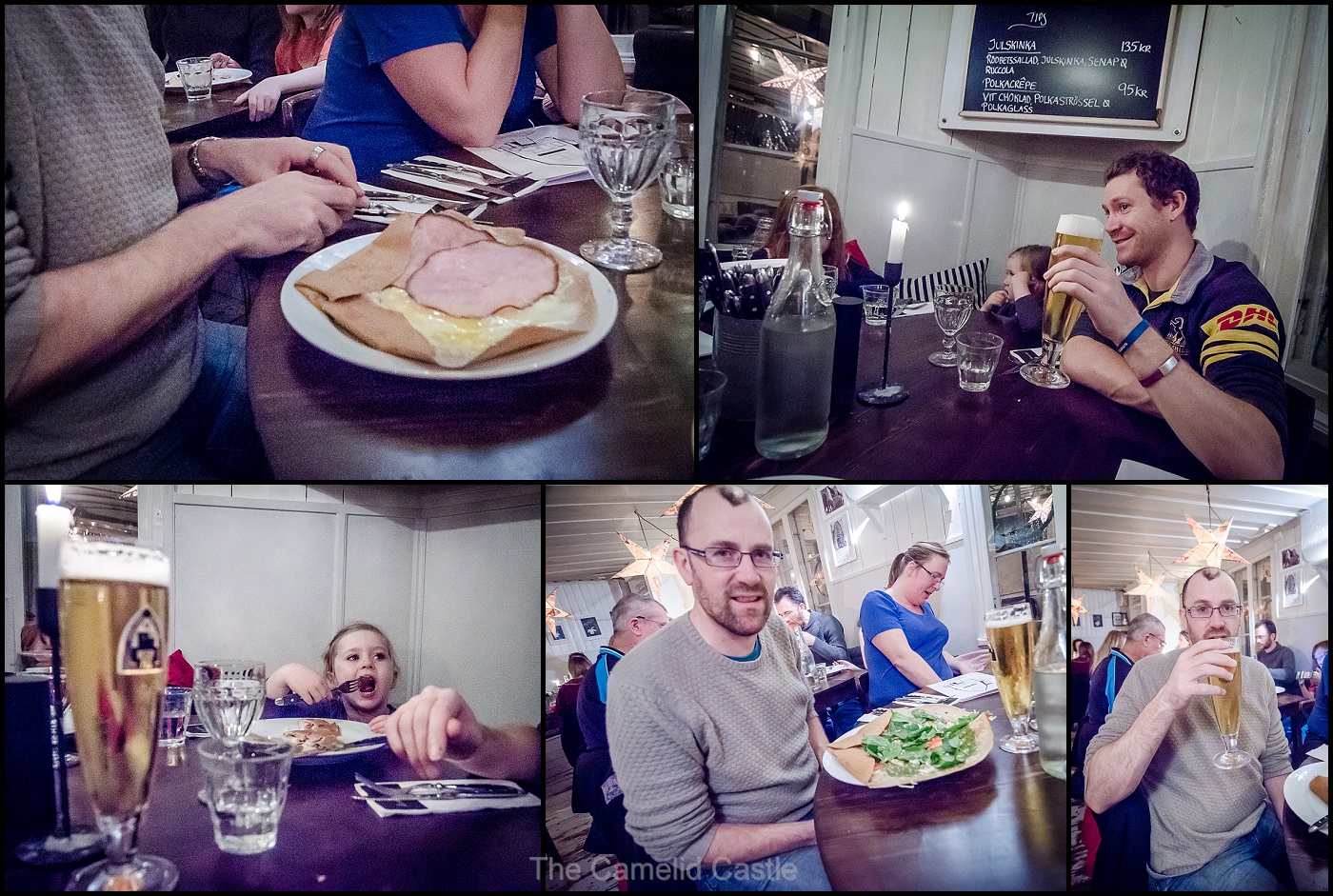 All very full, and insanely hot – the restaurant was the temperature of the sun, we were sitting around in T-shirts, we headed back to Bjorn’s for a coffee, and one last catch-up.  It was then time to get the kids into bed (and for the adults to pack) before a big day of travel the next day.

Statistics for the 21st of December 2015 in Visby – the temperature was 7 to 10 degrees with a mean of 8 degrees (pretty warm for that time of year). It has since snowed (we missed it again!).  Total walking for the day was a touch over 12km.  The crepe and pastry consumption was high, but a whole day without sausages for the boys…….