Our very pampered suburban alpacas still need to be shorn once a year, so that they don’t cook over Summer! While their nice woolly jumpers keep them toasty warm over our frosty Winters, it gets pretty hot under all that fleece once the temperatures get above 30 degrees.

Canberra has put on a rather strange Spring, with some quite hot days, interspersed with lots of rain and cold mornings and days. We normally hold off shearing the alpacas until it’s consistently warm. That was hard to judge this year, but with a few 35 degree plus days the other week, we had them booked in as they were getting a bit grumpy with the heat. We think the alpacas look slightly ridiculous when freshly shorn, it’s such a dramatic change from their very fluffy coats. Here is Mr Chimu a few days before shearing, in all his fluffy glory!

Inti, being larger, looks even more like a giant cotton wool ball. At least when he had a full fleece we can pretend that all his girth is due to the fleece, and not at all his well fed tummy. 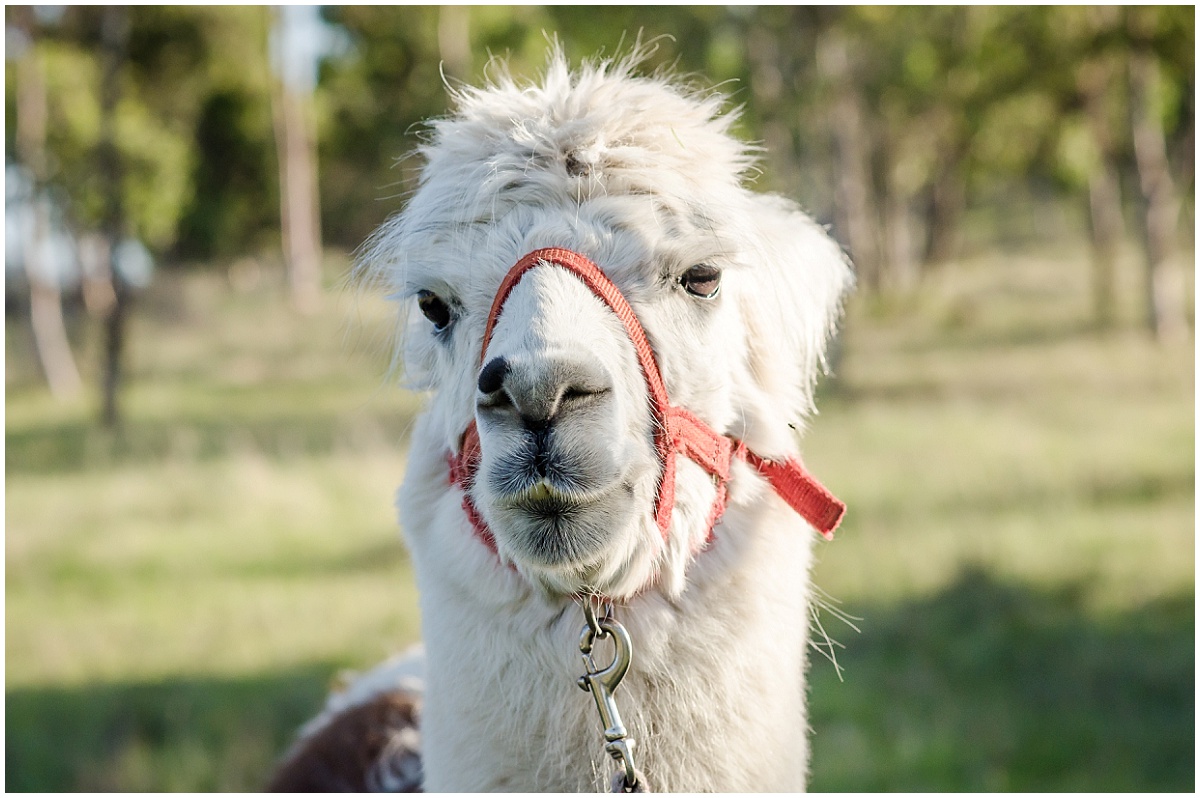 Our shearer, Ian, has a mobile shearing table. It fits on the back of his ute and has a hoist to get it on and off. This means he can come to us and shear the alpacas in our driveway. This proves to be quite the sight for the neighbours and passing vehicles and cyclists, but is far more convenient than hiring a horse float or van and spending half a day taking them out to the public shearing day at the farm they were bred on. It’s also far less stressful for the alpacas, as the whole process is over and done with in 15 minutes per alpaca.

It was late Saturday afternoon (and quite warm and windy), when Ian and his offsider turned up at our place, ready to de-fleece the Camelids. Neither alpaca is a fan of being shorn. It doesn’t hurt them at all, but they really object to being tied on the shearing table. Unlike sheep, alpacas (and small llamas) are shorn laying down on a table with their legs tied outstretched. While it looks very undignified, it is a fairly quick and easy process for the alpacas. They just have to lay there and behave. Unfortunately, both Inti and Chimu are big sooks and like to put on a performance to rival a tantruming toddler (something I’m way too familiar with!).

Chimu has lost his voice from screeching in protest, on several shearing days. Now that we get them shorn in our driveway, he has far less time to carry on like a pork chop and he is usually much better behaved. Of course, when Michael went into the backyard to halter Chimu up, Chimu thought he was going for his daily walk. He even happily posed with Michael, for the final capture of his fluffy state.

About 10 seconds later, Chimu spied the shearing table and promptly lost all his bounce and bravado. It was a bit hard for him to make a getaway though, and he was unceremoniously hoisted onto the table. 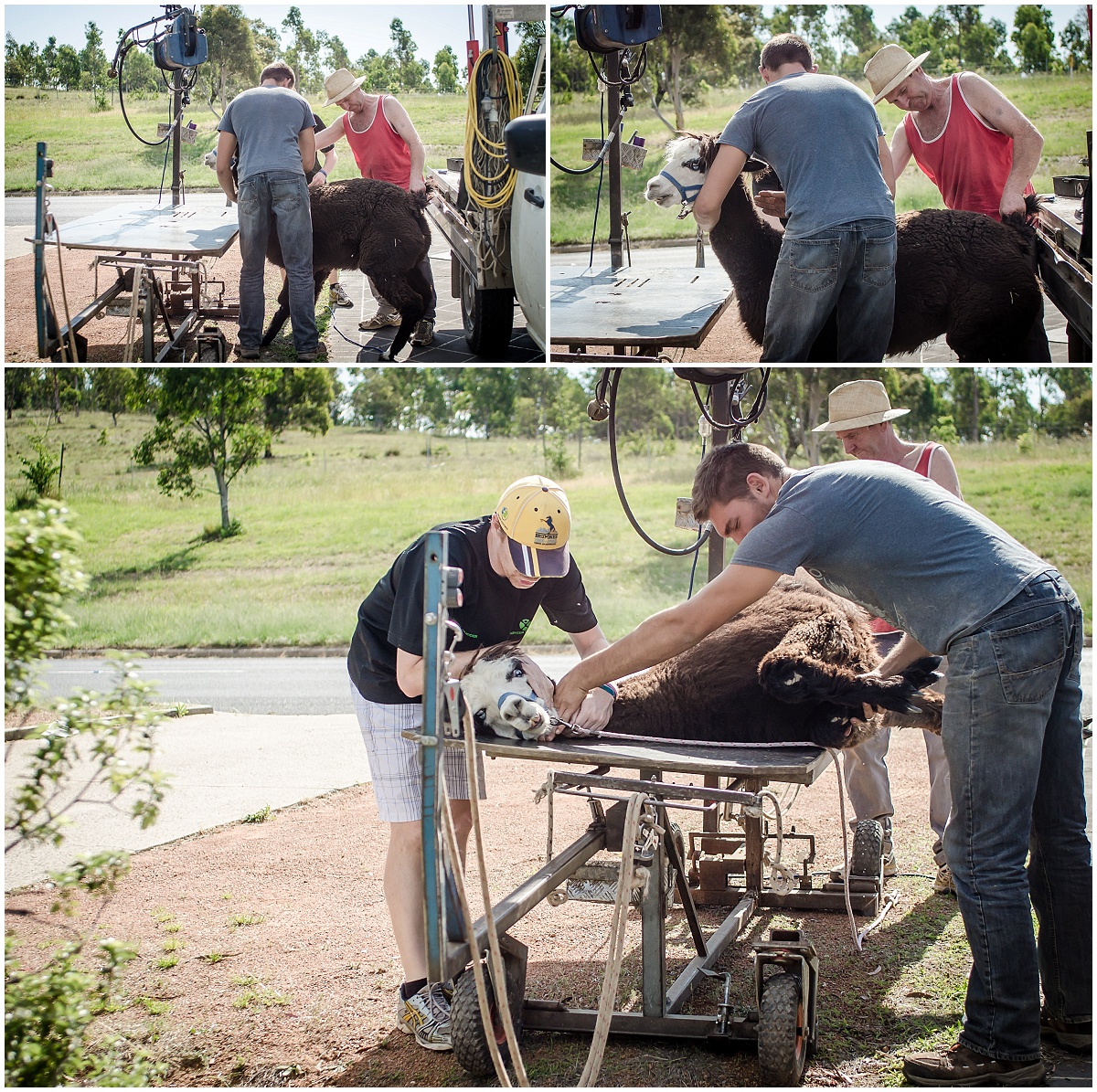 To keep him calm, we then usually put a towel over his face and give him some gentle pats. It’s normally around now that Chimu starts humming and screeching, and mostly sounding like a cat being strangled. This year, there wasn’t too much of a performance, and while he did express his displeasure it was fairly tame compared to previous years. Even the kids were impressed at how good he was being. Yes, the highlight of our 2 and 4 year olds weekend was watching the alpacas being shorn.

Astrid was asking a million questions (as usual) and Soren was not sure whether to be concerned about what was happening to his alpacas or whether he really should get closer (he kept trying for closer). 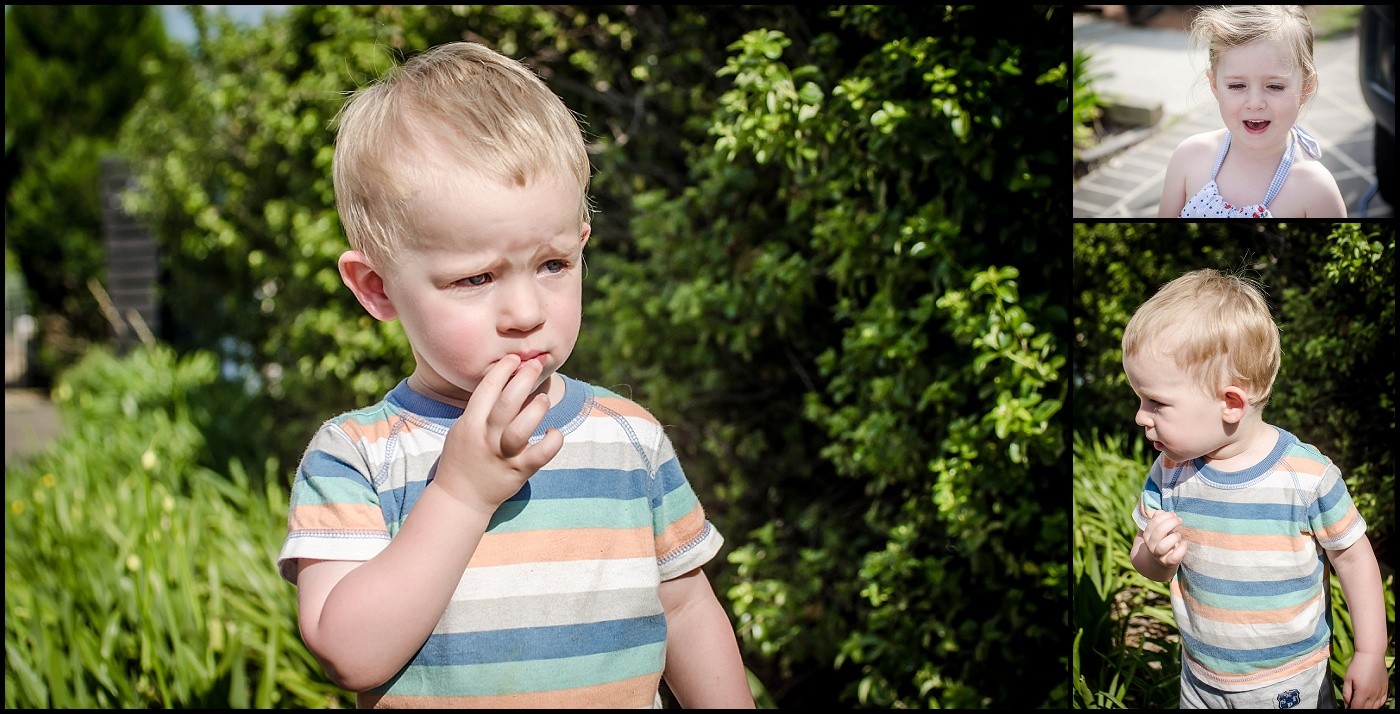 While the alpacas are being shorn, it is an opportune time to trim their nails and check their teeth. We also do nail trims during the year, but it’s an awful lot easier when they are immobile on the shearing table! 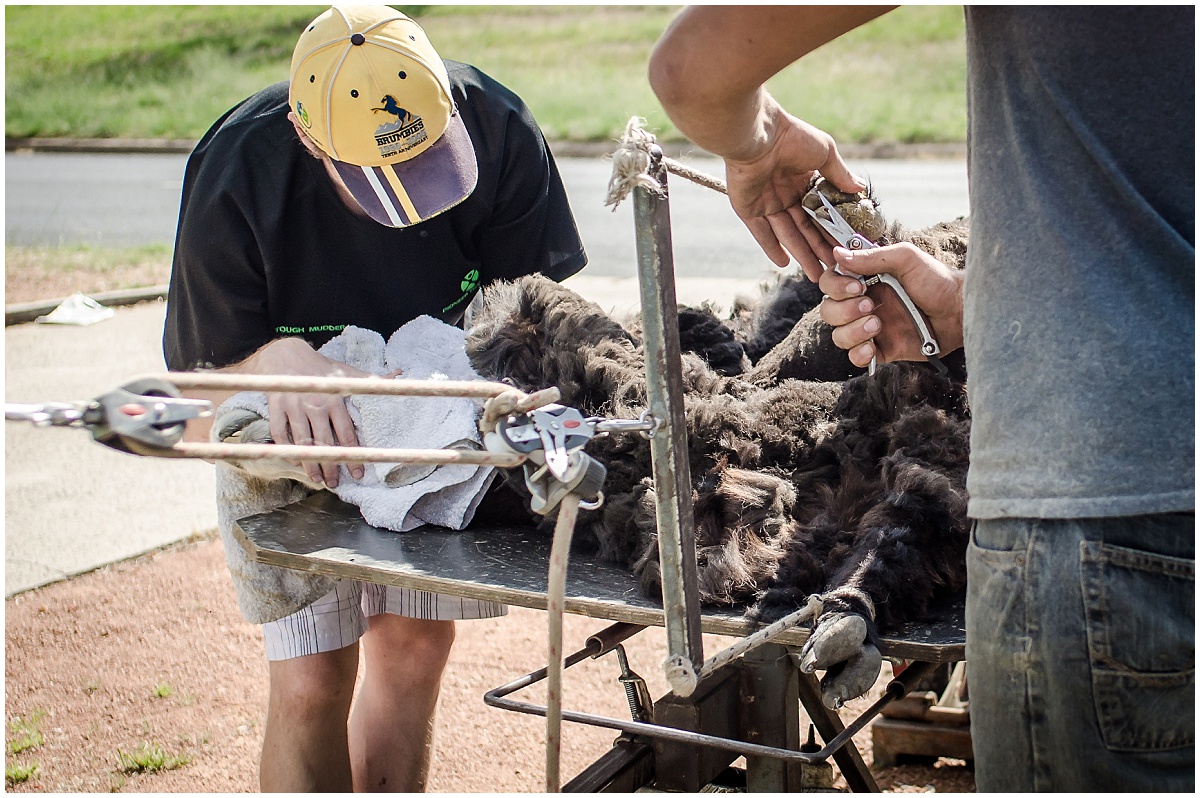 After a quick manicure and his teeth given the all clear, Chimu was flipped over and given a matching short haircut on his other side. He continued to (mostly) behave, and we made it all the way through a shearing without a screeching cat sound, or him spitting. 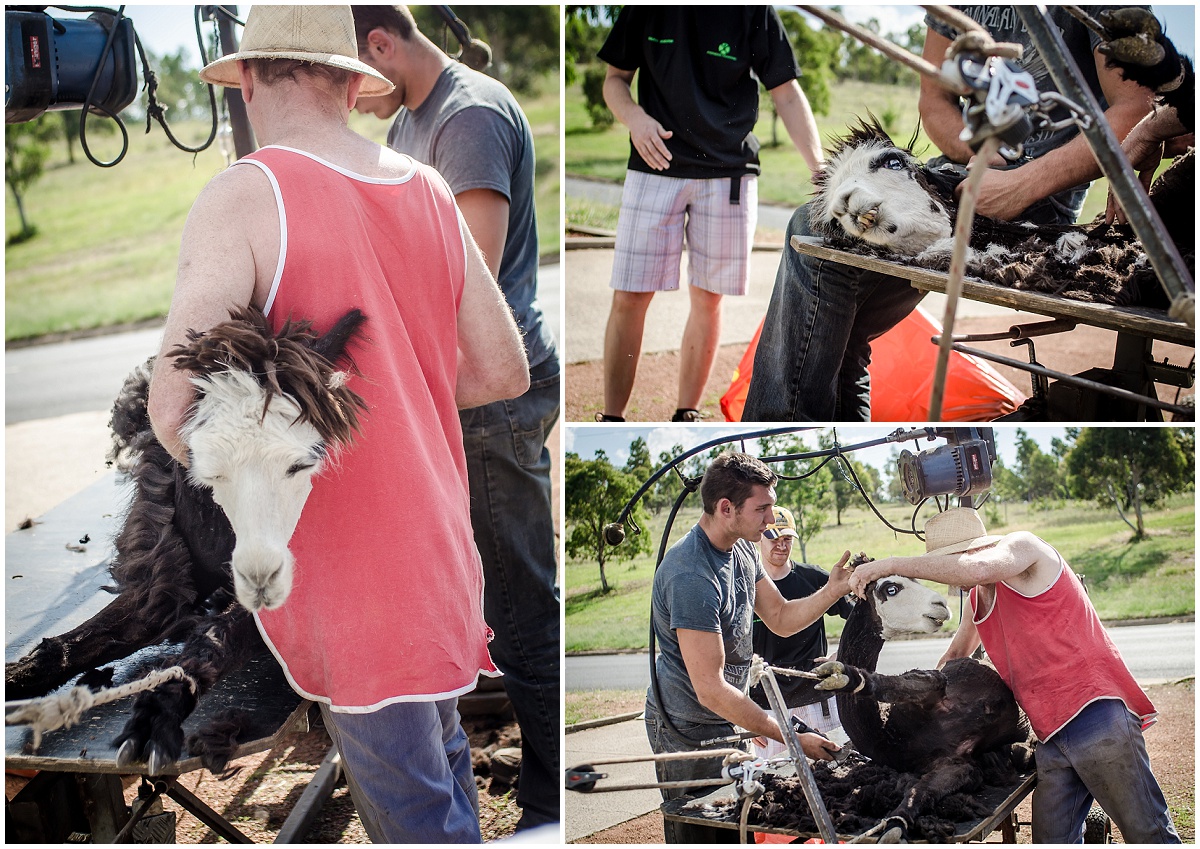 With a large amount of fleece now in a bag, rather than on a Chimu, he was re-haltered and released back to the backyard. It was a very quick trot back away from the scene of the crime, he was not hanging around to see what other nasty surprises we might have in store. 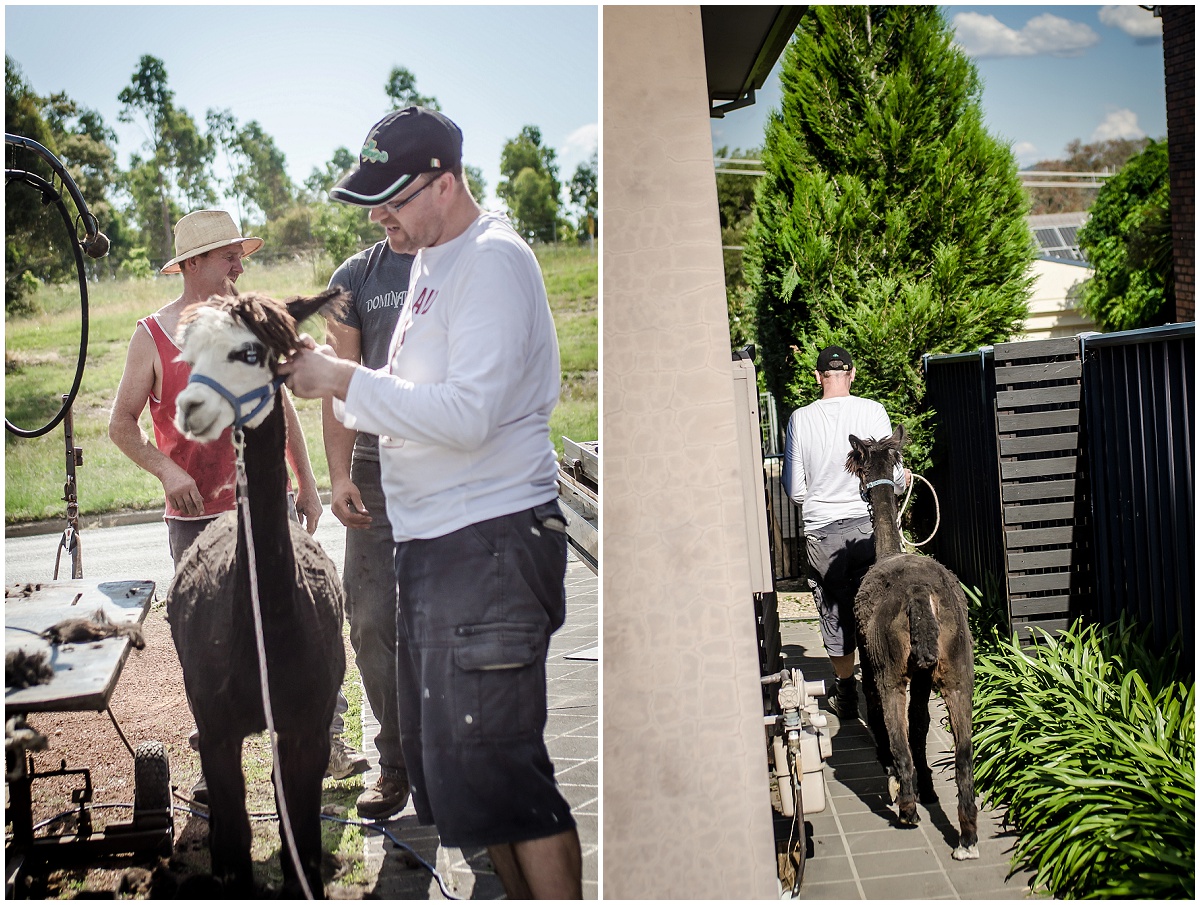 Despite Inti watching Chimu being shorn from the safety of the backyard, and then seeing Chimu reappear – now minus his fleece, Inti did not cotton on to what was awaiting him. Sometimes we do wonder about how smart he is! This was one of those times, as he jauntily trotted up to the driveway, excited to go out for a sunny afternoon walk. 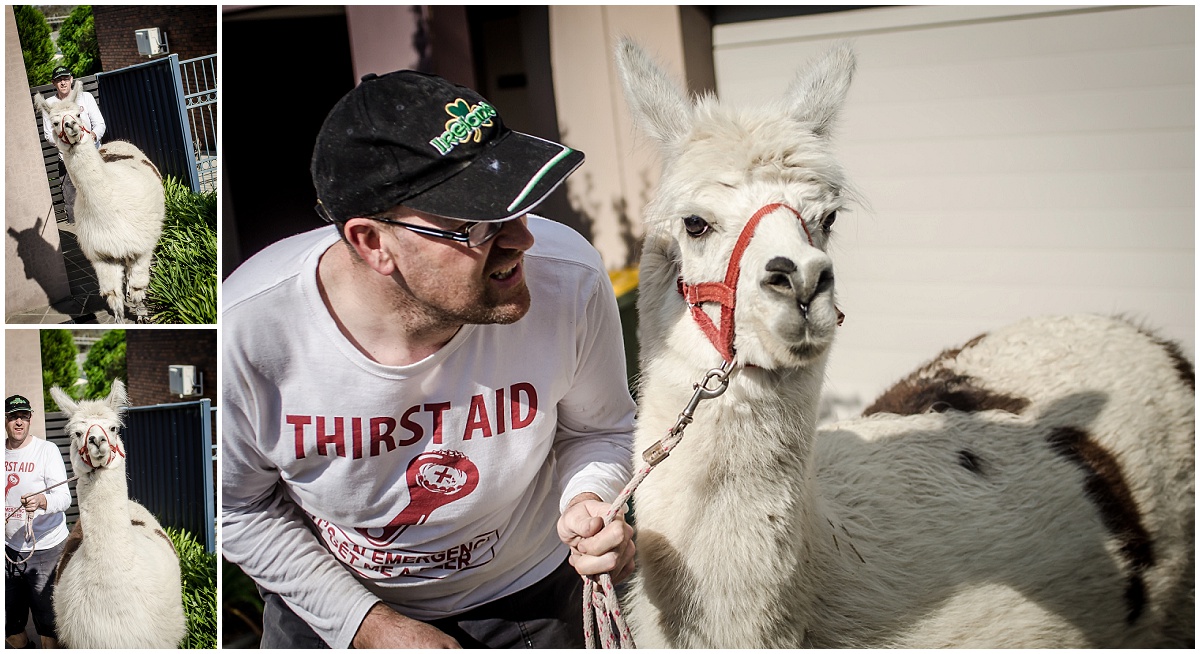 By the time he had turned the corner around the front of the ute, he spied the table and came to an abrupt halt. Now he realised his grave error! It was a bit late though, he was still getting shorn, although it took slightly more effort to get all 100kg of him on the table. 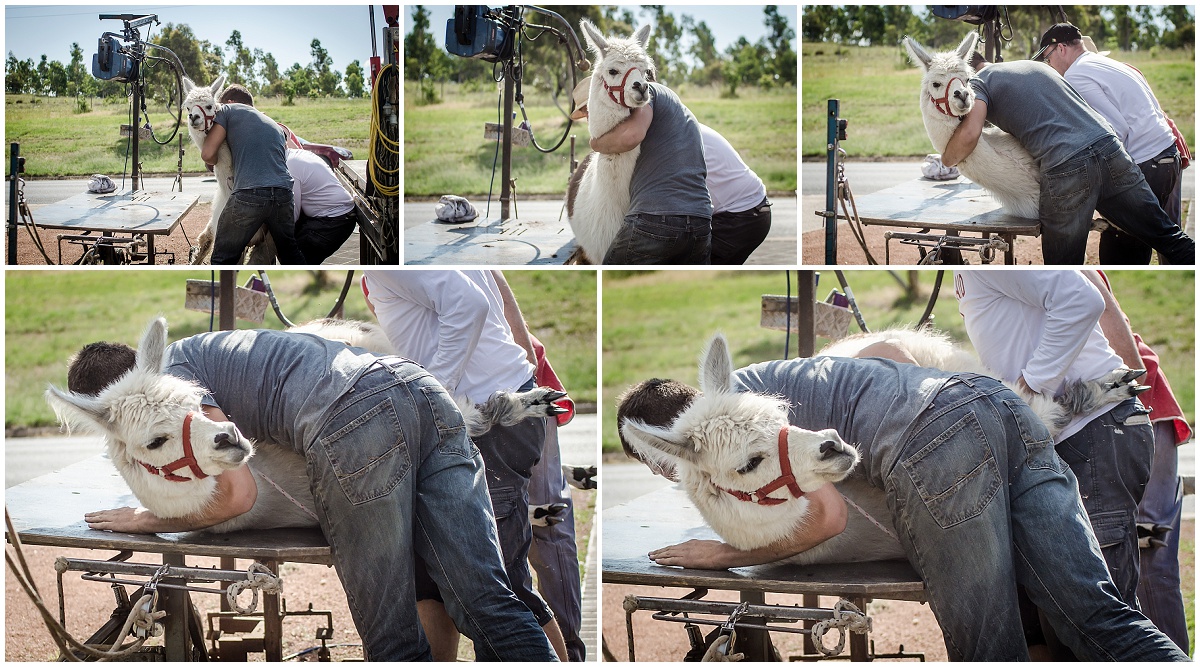 Inti was secured on the table, and while he wasn’t overly happy about it, he was being relatively well behaved.

As the shearing started, Inti had his nails trimmed and his teeth checked. Neither alpaca needed their teeth ground down this year. As alpacas teeth are constantly growing, they need trimming down when they get too long and cause an underbite. Their teeth are ground down with an angle grinder (with a special attachment). It sounds quite horrid but is pretty similar to us using an electric toothbrush and doesn’t overly bother them. 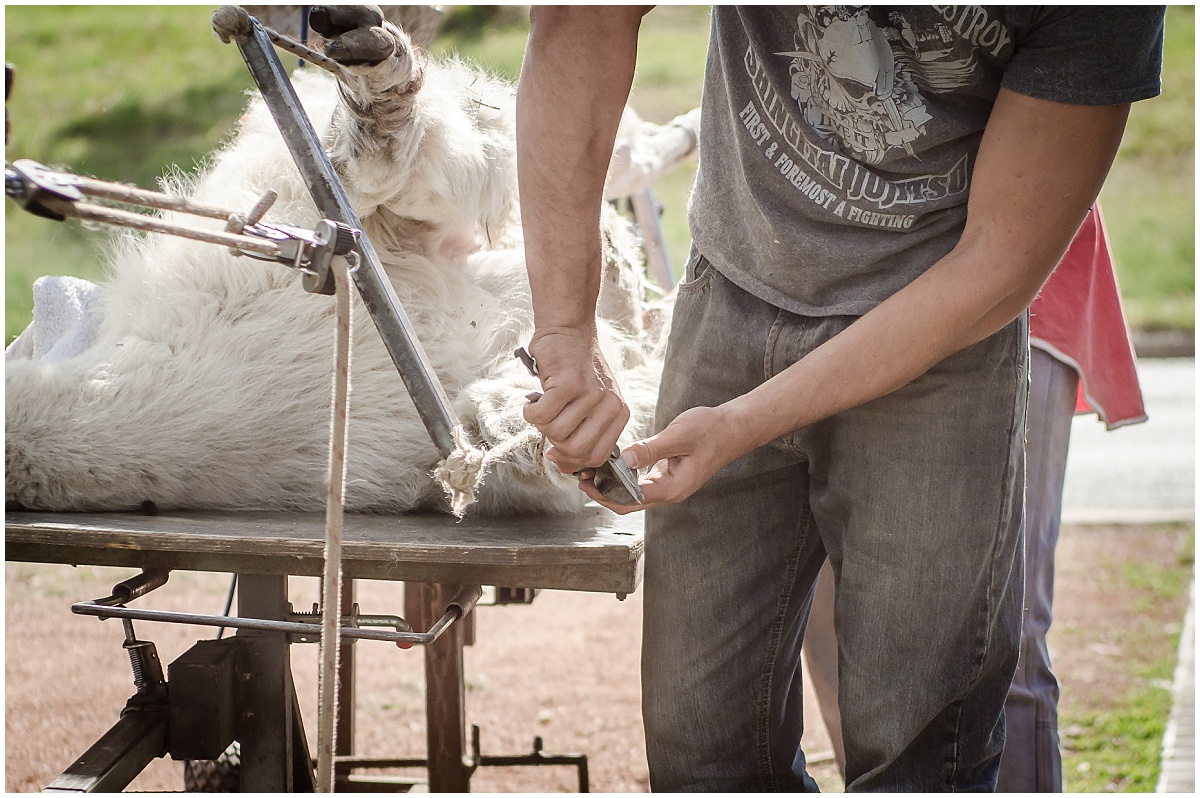 There were many kilos of fleece on Inti this year (it had been a cold-ish Winter) and about half a kilo of dirt that he had stored up in his fleece too! 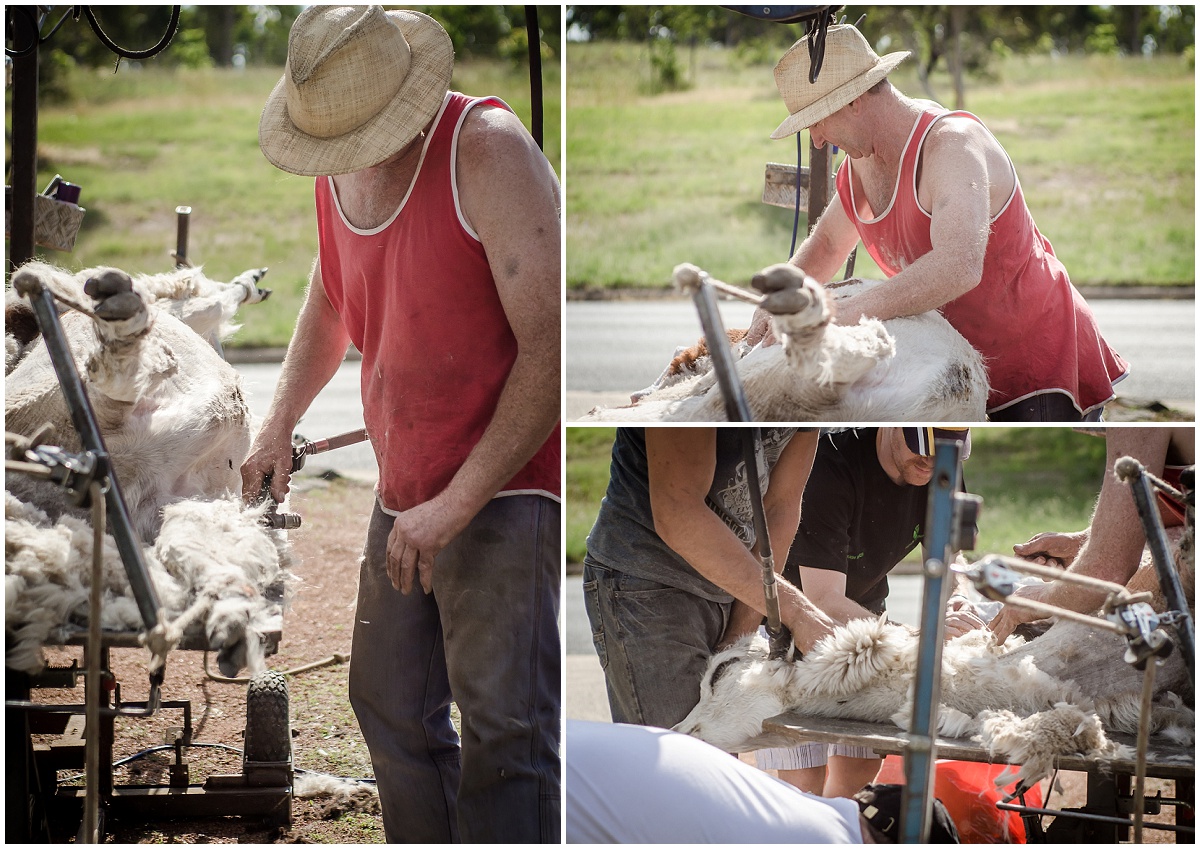 Then it was time for his neck to be shaved and a little trim of his fringe. It had gotten quite breezy and the fleece was flying through the air like snow. The kids thought this was particularly amusing. 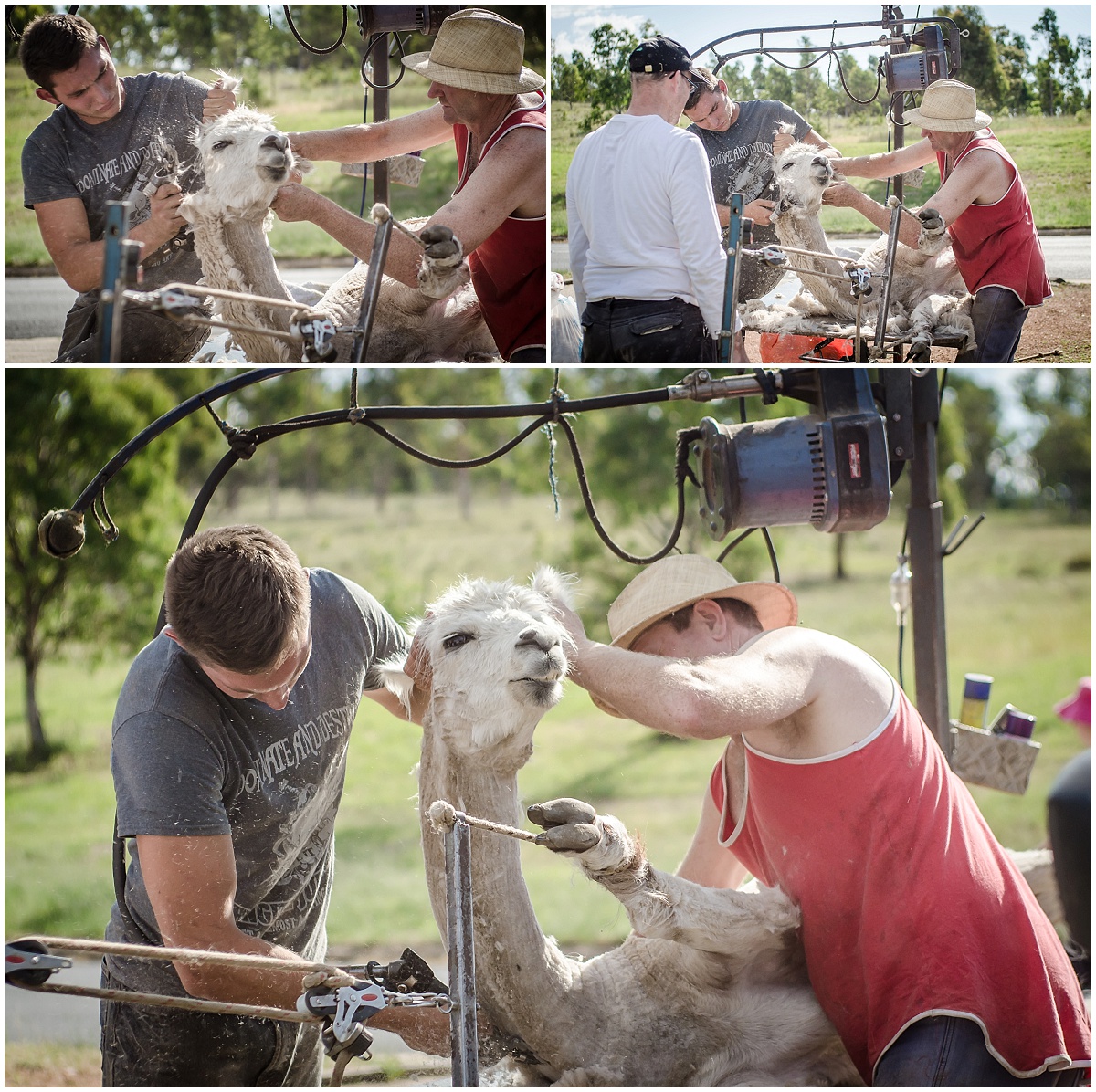 Then it was time for Inti to be flipped and the other (still woolly) side to be shorn. It was about now that Inti was getting a bit grumpy with the process and kicking and wriggling around. His relatively good behaviour was coming to an end. 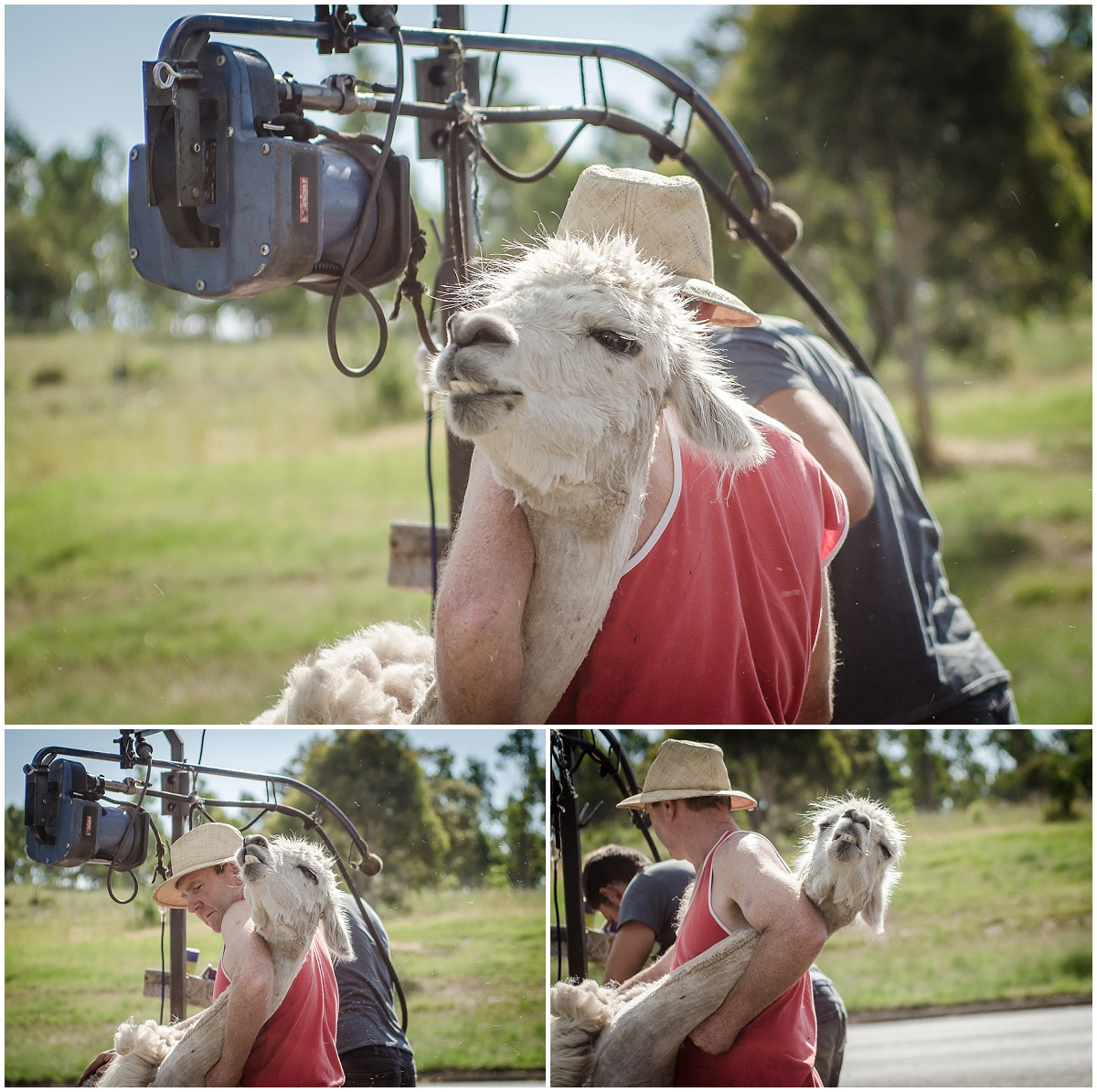 Astrid and Soren had been trying to sneak up closer and closer to the action. I’d been trying to keep them back so they didn’t get spat on when the alpaca’s got cranky. Well Inti, finally lost it and started spitting, and Astrid despite being a couple of metres back got a tiny bit blown onto her. Alpaca spit is pretty foul, especially really green chaffy spit. It does not smell nice at all and requires a shower to get rid of the stench. Both kids got a tiny spray, Soren was still keen to get closer, but Astrid wanted to go inside immediately and de-stench herself. See that green stuff, that is delightful alpaca spit!

….. and here are the new streamlined and Summer ready alpacas! They look a little silly, feel like soft pile carpet and rapidly get coated in dirt again…….. but the shearing is done for another year.

Forty-five minutes after Ian arrived, the ute was packed back up and the only sign of the afternoons activities was some random bits of fleece blowing around the front yard and some skinny but grumpy looking alpacas. Soren requested ‘more, more, more shearing’. Inti and Chimu need another year to replenish their fleece supply before we subject them to more shearing, so they are safe for quite awhile.