The plan for our second day in Munich was exploring the Baroque Palace, Schloss Nymphenburg, and taking the kids ice-skating in the city centre, a bit different to what their friends were doing back home in much hotter Australia. We also found plenty of time for tasty German food!

Our second day in Munich, was the one day in a very busy few days that we did not have to be up early and rush around.  Of course Miss Astrid decided to wake up at 6.45am and chat non-stop and ensure we were all up.  The joys of hotel rooms with 4 of us in them….. we were not impressed.

We made our way down to breakfast (it’s always fun to check out a new hotel’s breakfast selection) and found a good array of hot and cold foods,  muesli, and pastries.  The staff was very attentive bringing us coffee and immediately bringing the children freshly made hot chocolates, they thought that was pretty neat.  It took the adults about 3 coffees before we were ready to face the day. The kids had enjoyed the fresh fruit selection and were obviously over hotel breakfasts when all they wanted to eat was muesli and a bowl of fruit salad!

Again we had a pretty light schedule for the day. We did want to head out and see Schloss Nymphenburg and it’s gardens. Schloss Nymphenburg, i. e., “Castle of the Nymph”, is a Baroque palace. The palace is the main summer residence of the former rulers of Bavaria of the House of Wittelsbach and is about 8km from where we were staying, so some walking and quite a few stops on a tram. We thought we’d knock this over in the morning, while the kids weren’t too tired and free up the afternoon for more kid-interesting activities – ice skating and swimming!

When we set out it was drizzling and about 5 degrees, so not ideal weather but not too awful. We had been pretty lucky with weather on the trip so far, hardly any rain at all.  We made it to the nearby tram stop without incident and the tram trip was fairly painless. Another 10 minute walk at the other end and we arrived at Schloss Nymphenburg, before it opened at 10am. It’s unusual for us to make it somewhere early! 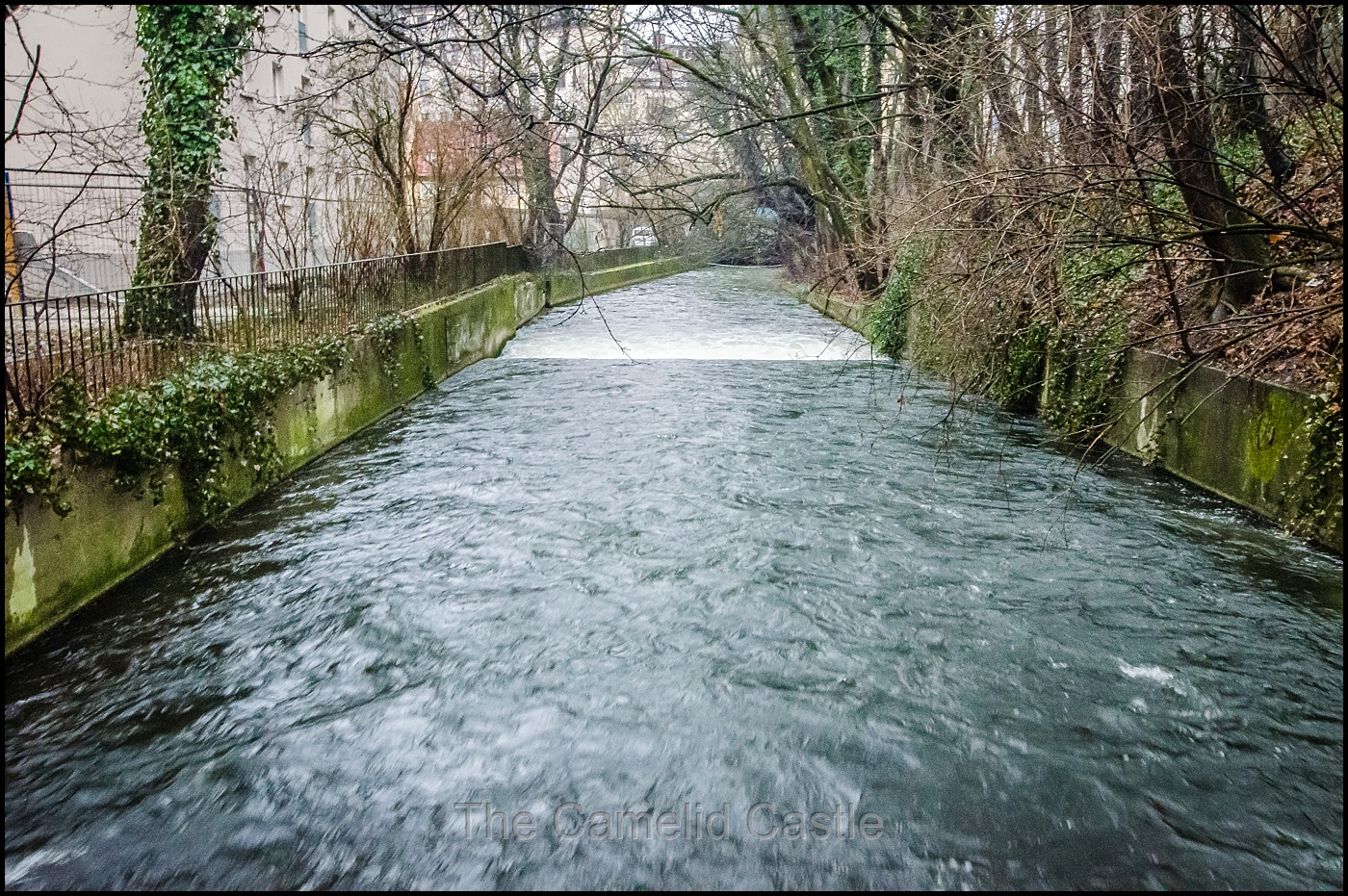 We had a look around the gardens with its big ponds and piles of rocks. The total size of the Palace Gardens are 200 hectares, so we knew we wouldn’t see all of them.  We started out by exploring the gardens directly in front of the Schloss. As usual there were lots of statues in boxes, covered for Winter.  The kids met several small dogs, out for their morning walk, which they found more entertaining than the gardens. 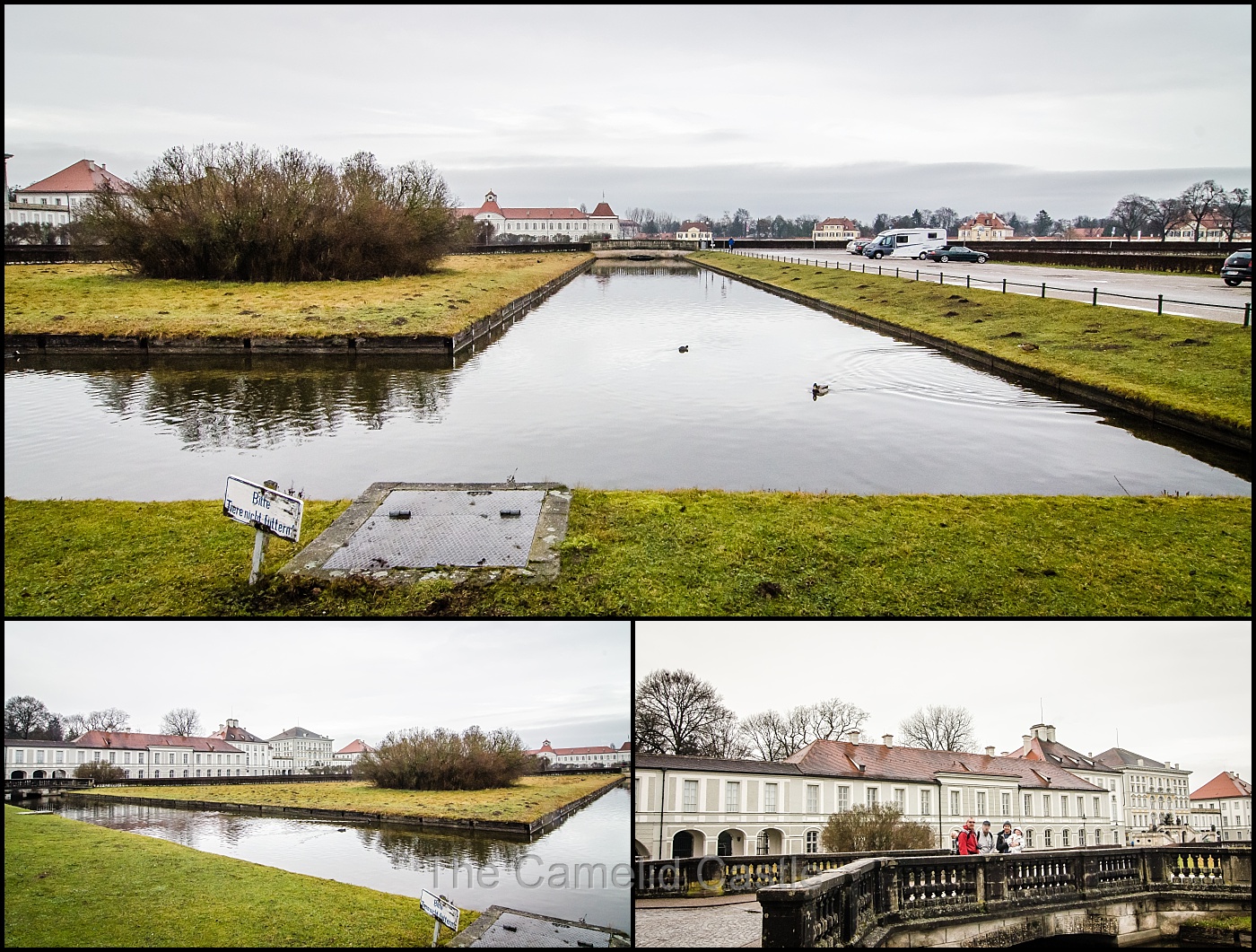 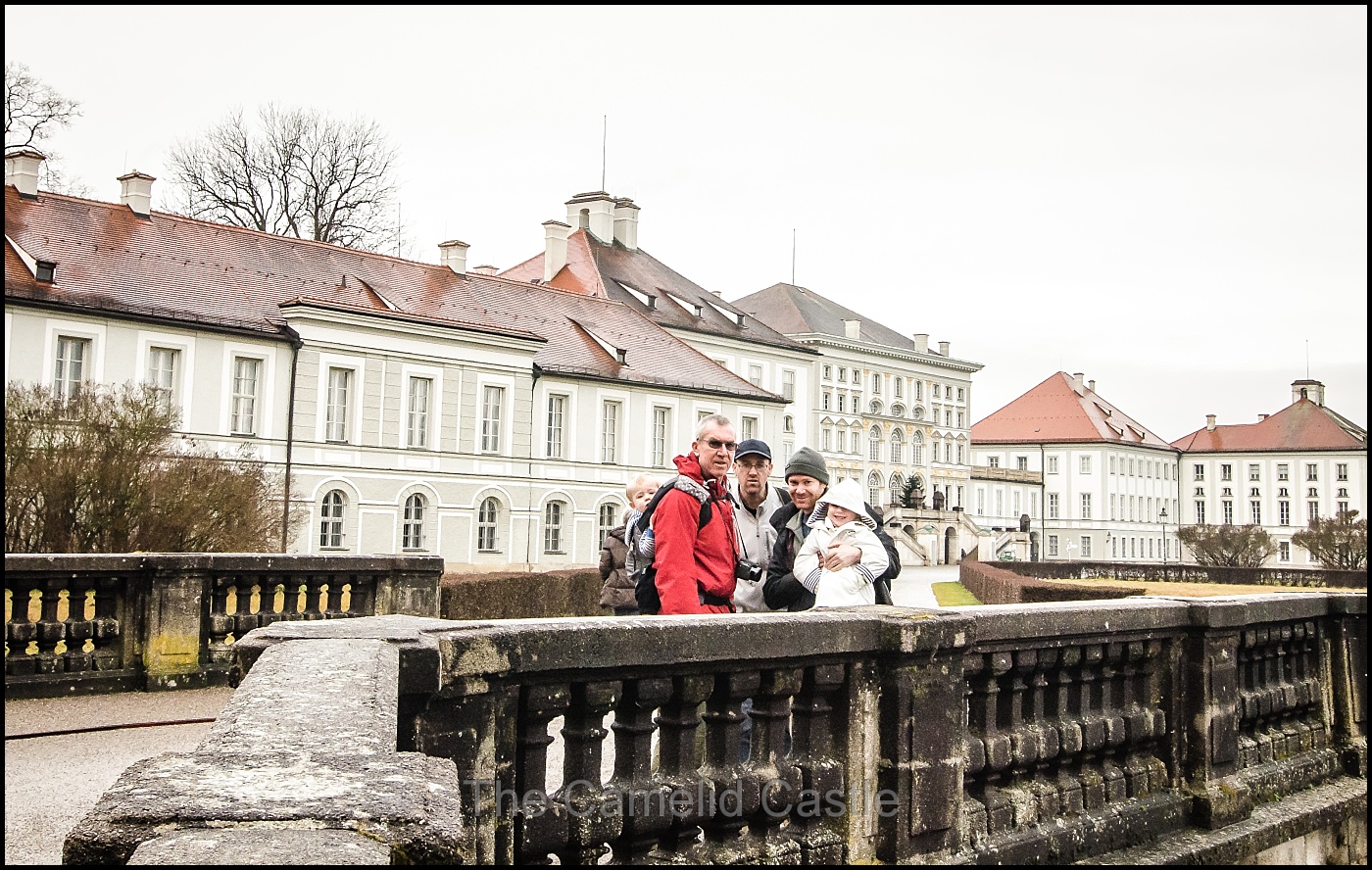 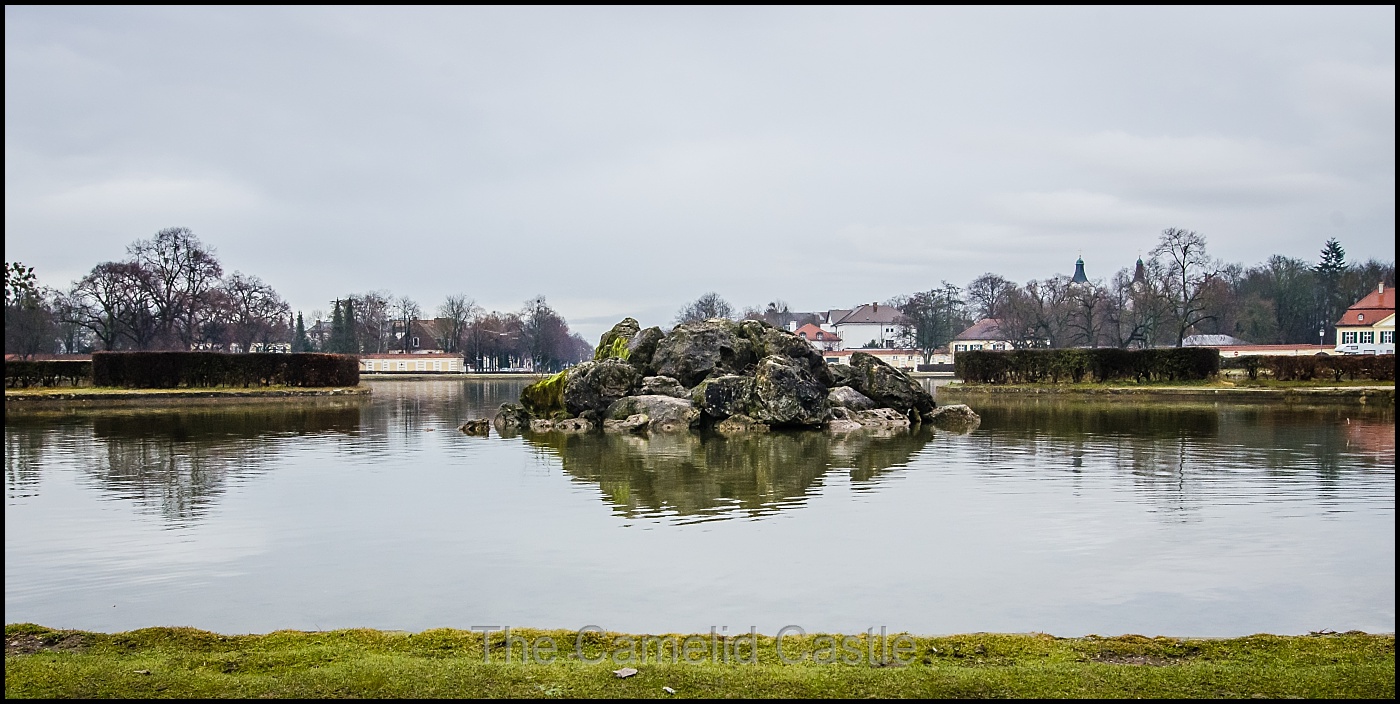 We decided we wanted to have a quick look around the main section of the palace. With a bit of palace and castle fatigue we opted not to do the combined tour with the museum and just bought the ticket for the main palace.

The palace was full of very ornate rooms, lots of painted ceilings and gold trim and plush furniture.  The painted ceilings were very impressive and most rooms also contained large paintings and lots of porcelain pieces.  The main ballroom with its crystal chandeliers and big light windows was one of the nicest rooms.  The central pavilion (which is the section of the Schloss you can tour) was completed in 1675, but was quite open and light, and nicer than many other castles we had visited.  It only took us about half an hour to tour the 20 rooms that were open for viewing.  It was a rather colourful palace, and worth a look, even with small kids. 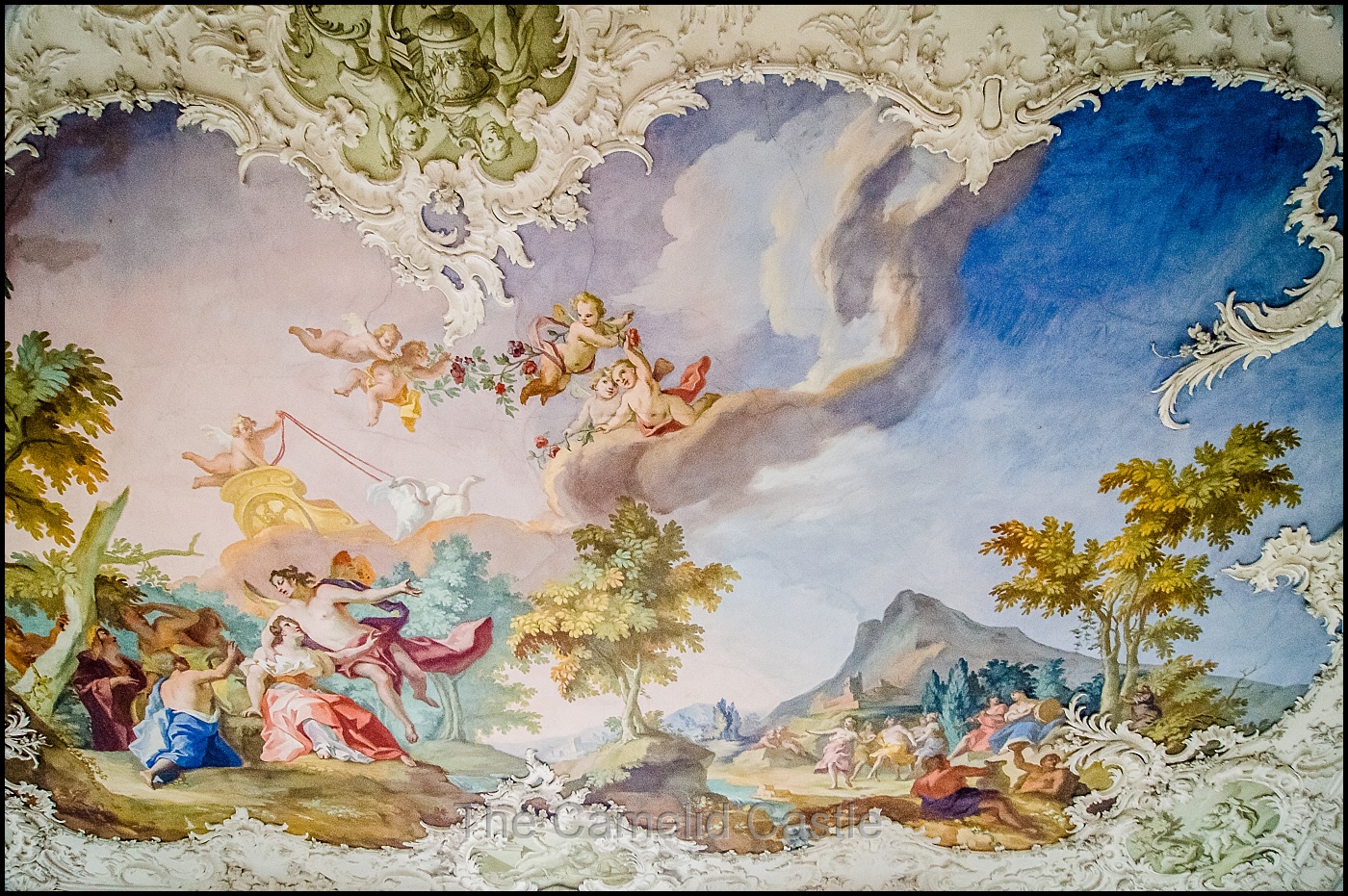 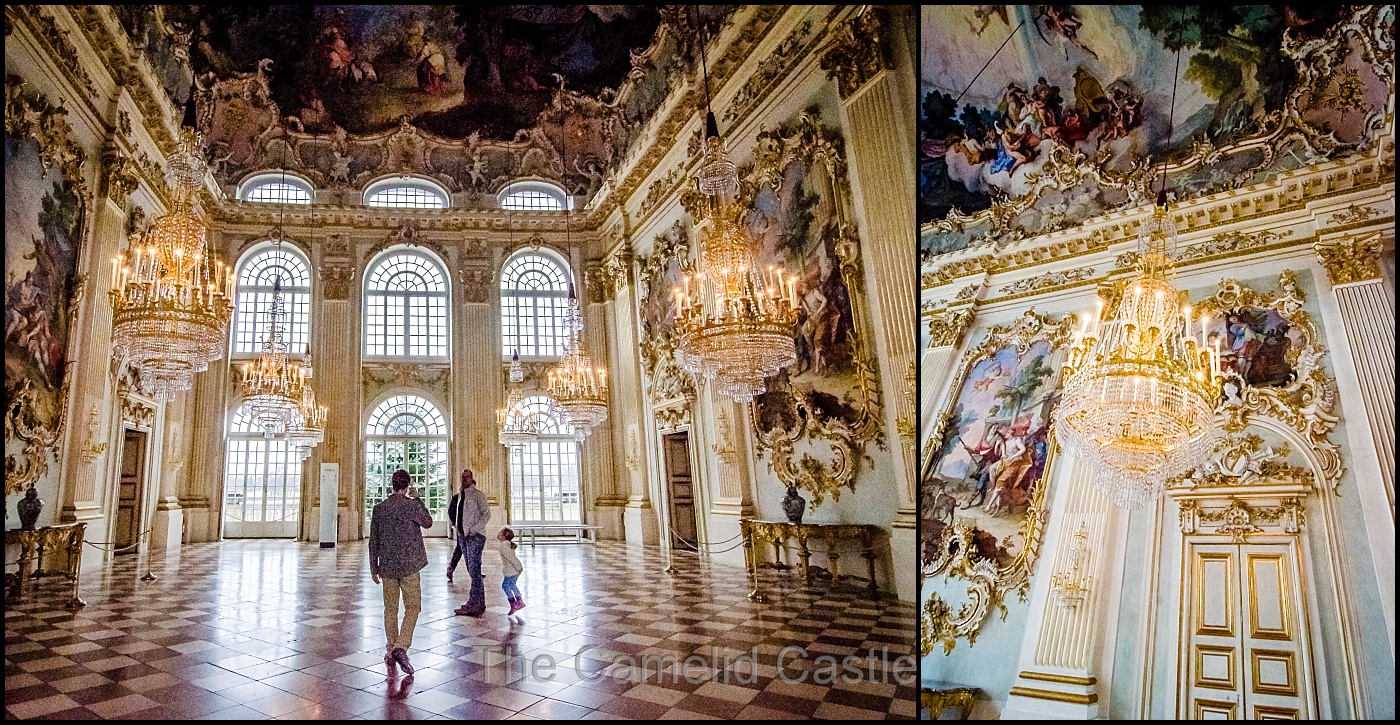 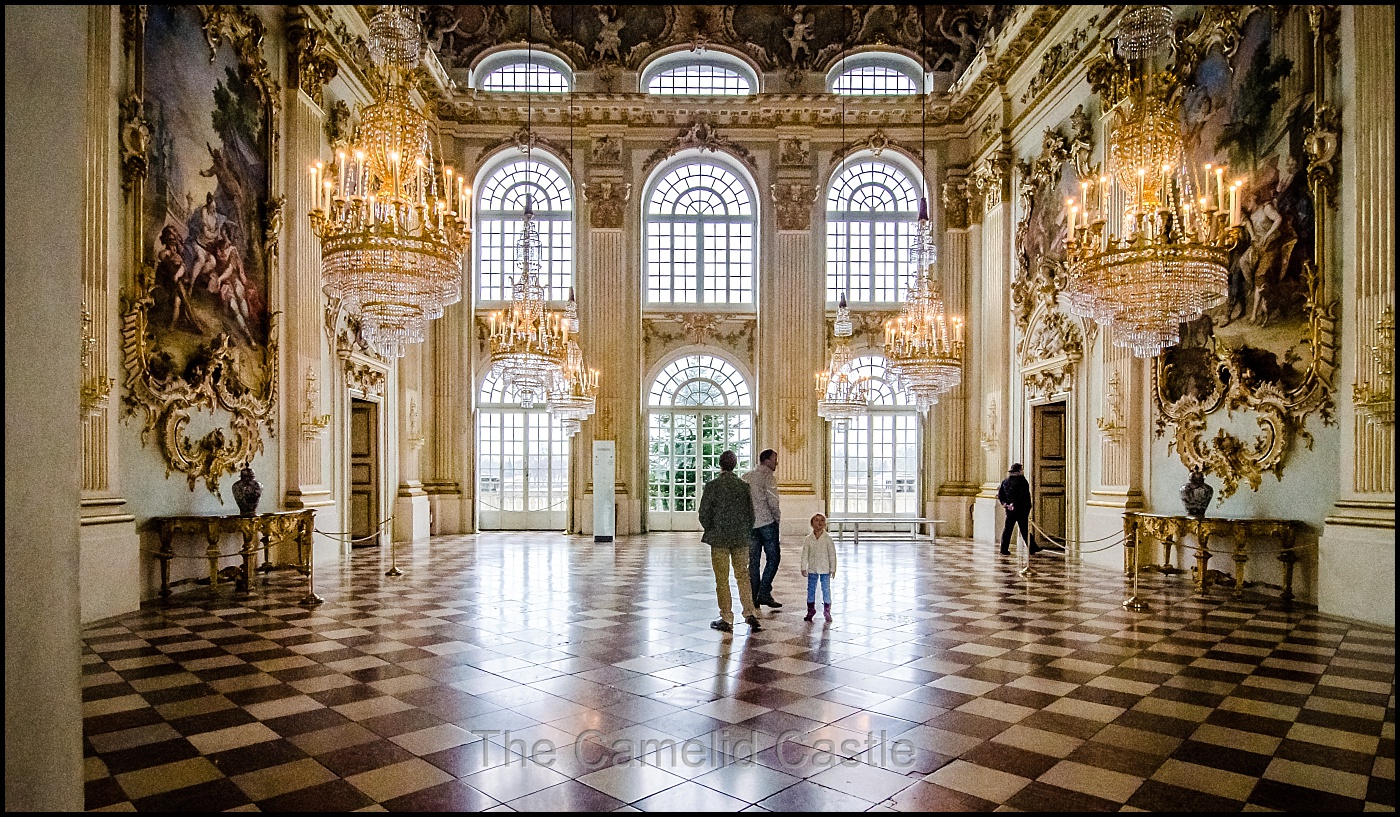 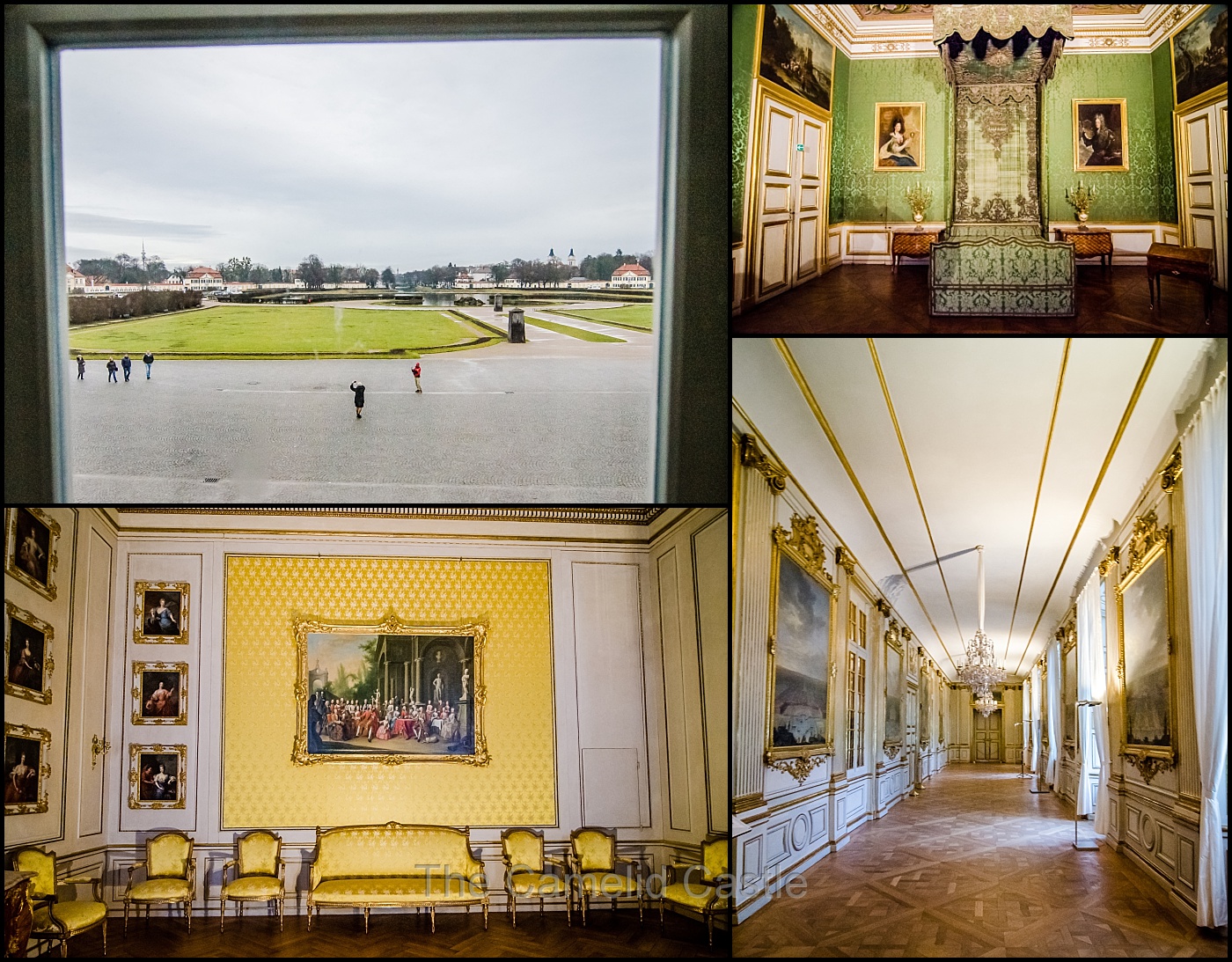 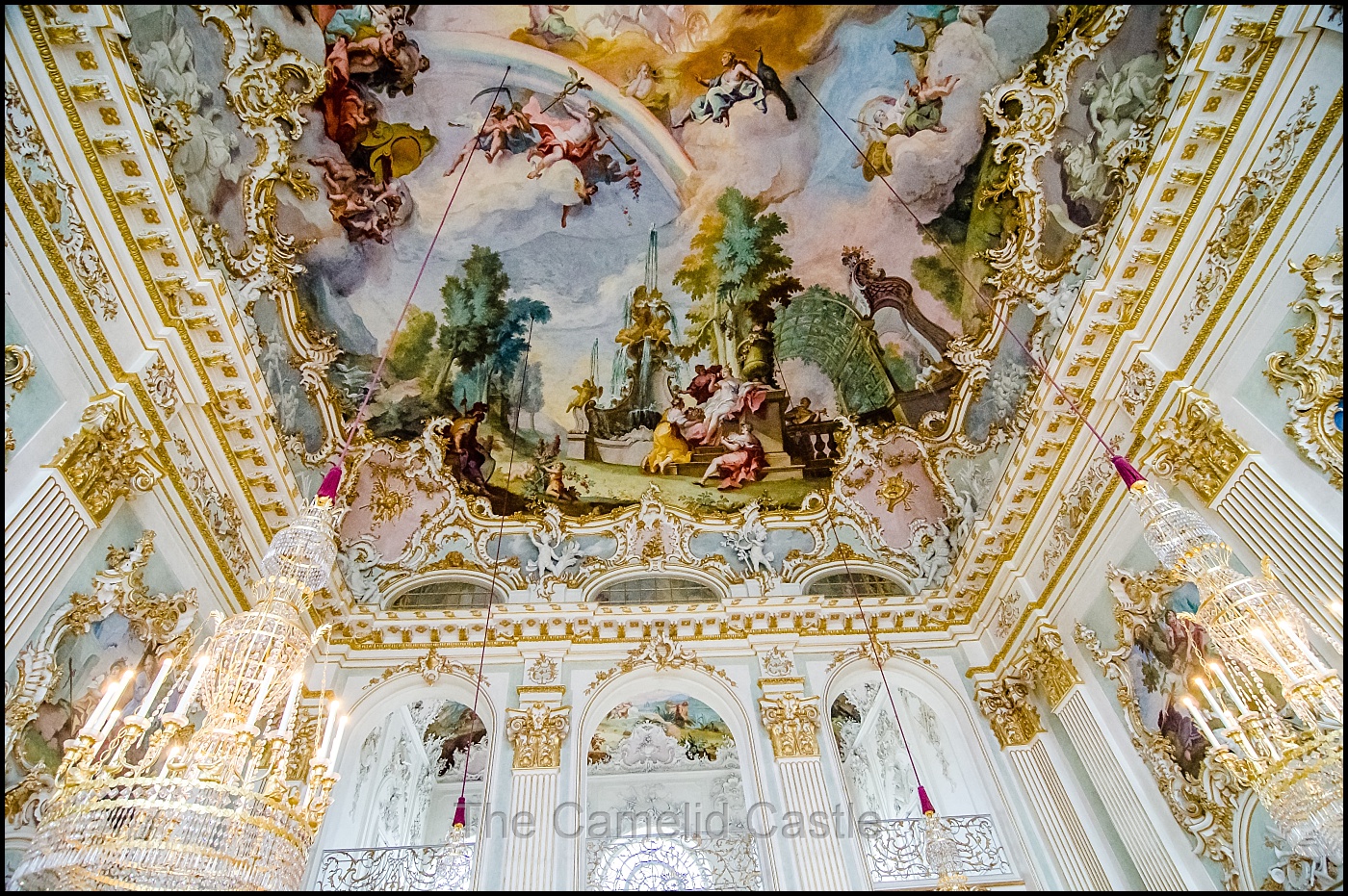 We then headed back down into the gardens behind the palace. It was now raining enough to need umbrellas, and was not ideal garden wandering weather.  The garden had quite a lot of geese in it, who were very friendly. It was good weather to be a goose! 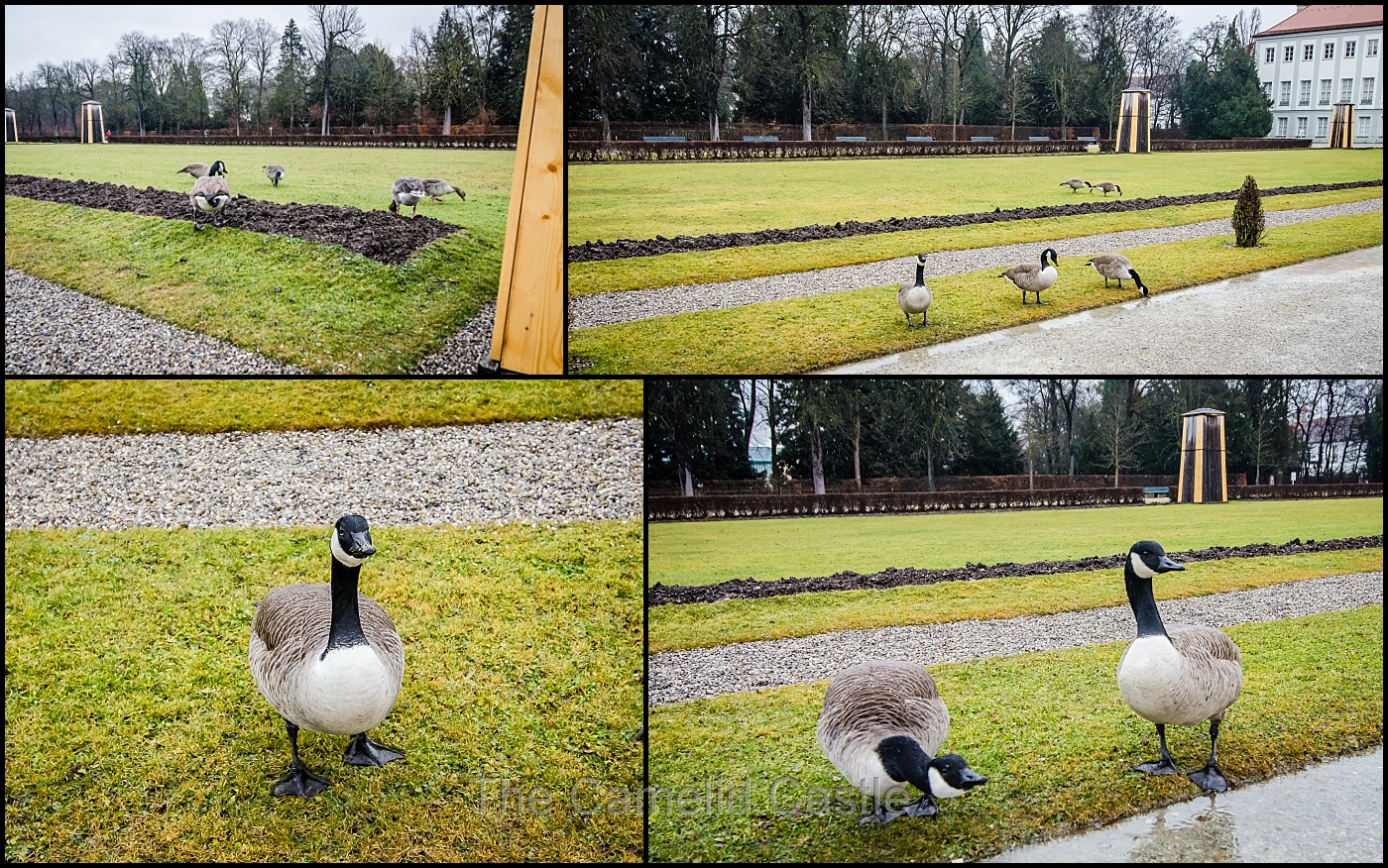 Given the weather, we didn’t walk all the gardens and headed back to the front of the palace and along the other buildings and out the front to the tram station.  There are quite a number of out buildings stretched out in a semi-circle around the central garden. It appeared many were in use as office buildings and/or being lived in. 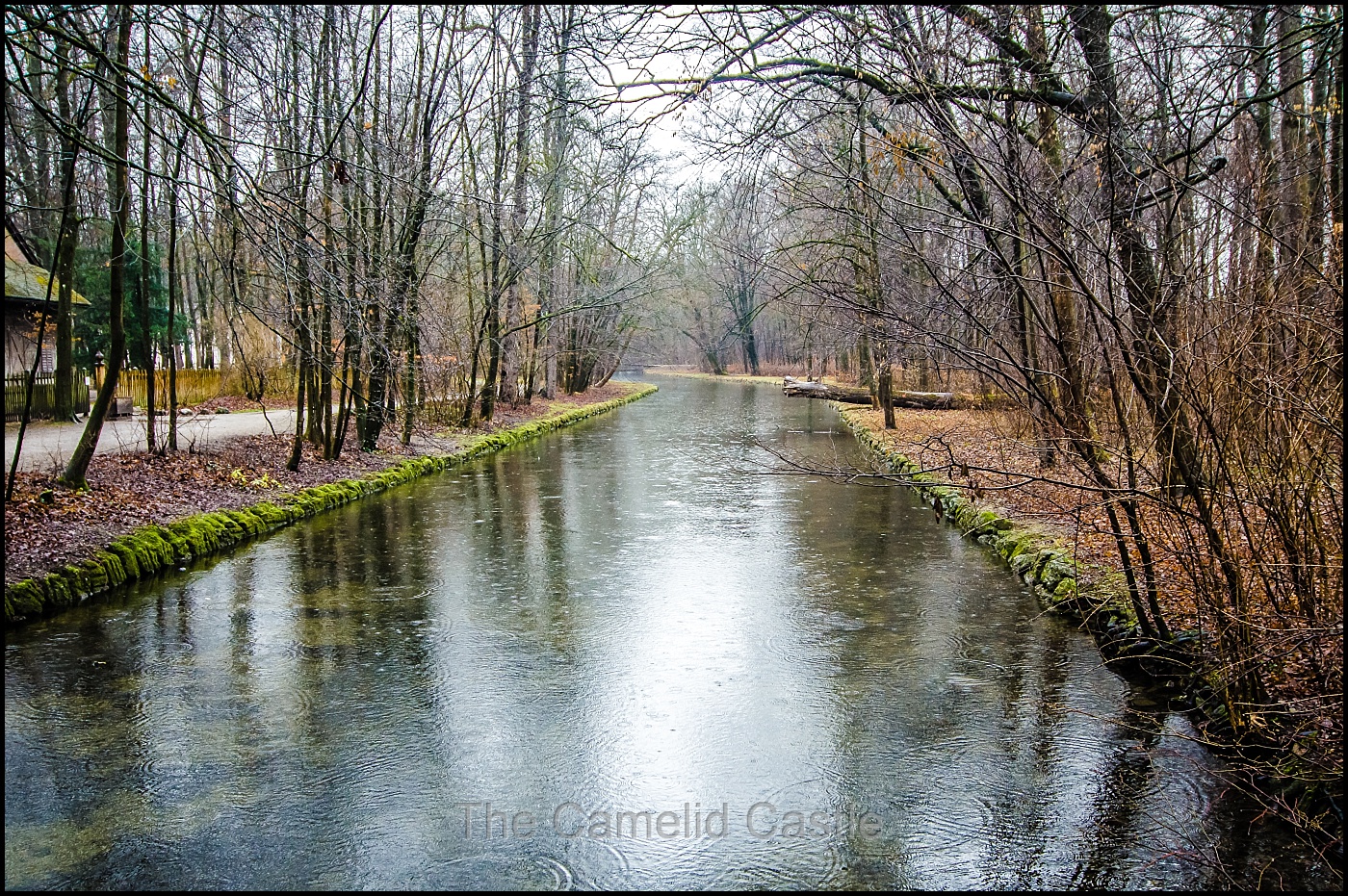 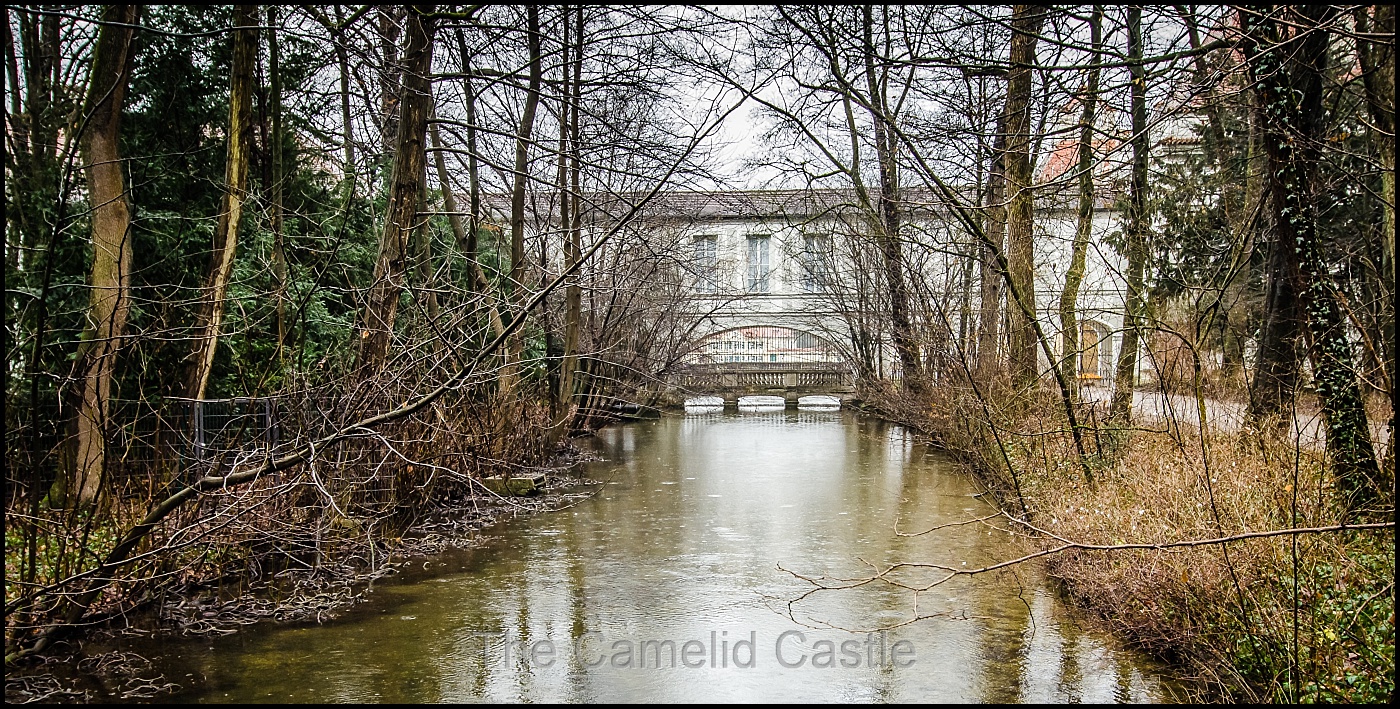 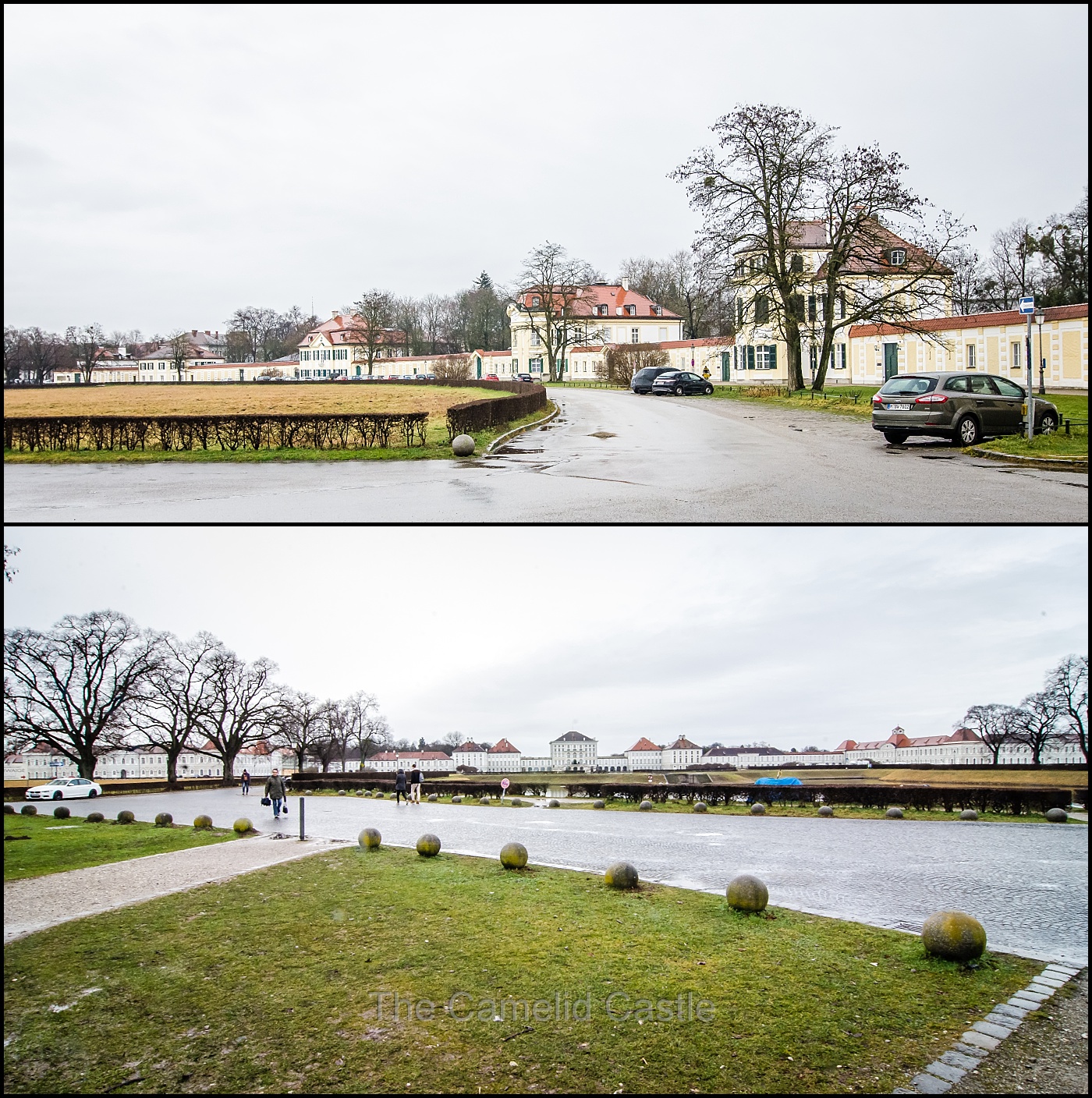 We caught the tram back towards the centre of the city and had a short walk down to the Viktualienmarkt – a large open air market with fresh produce and food stalls.  The Viktualienmarkt is open daily in a square in the center of Munich. The Viktualienmarkt developed from an original farmers’ market to a popular market for gourmets, and had been expanded several times over recent years.  Since we didn’t currently have cooking facilities and wouldn’t for another few days (we were in the midst of a long stretch of hotel nights) we didn’t bother with the fresh produce and just picked up some bread and pastries to snack on. 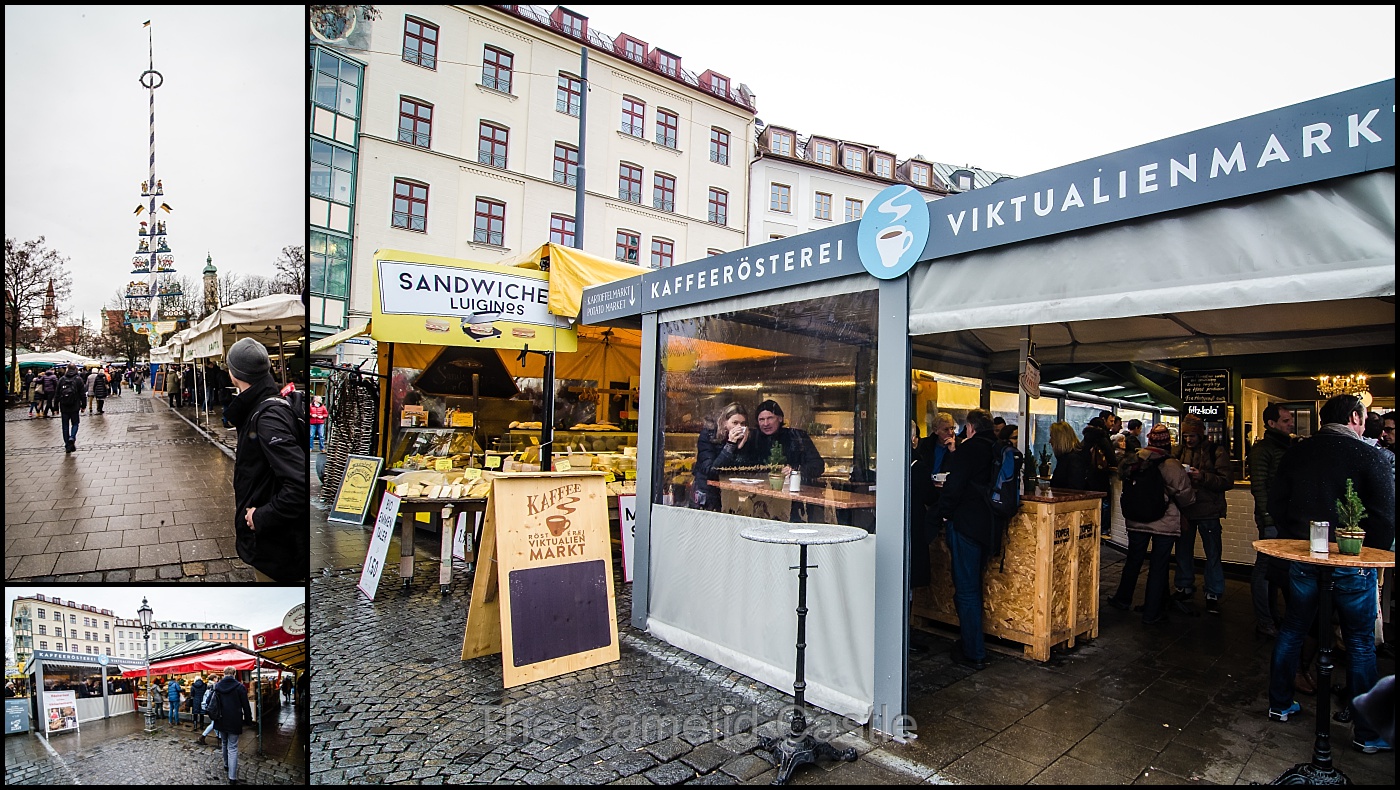 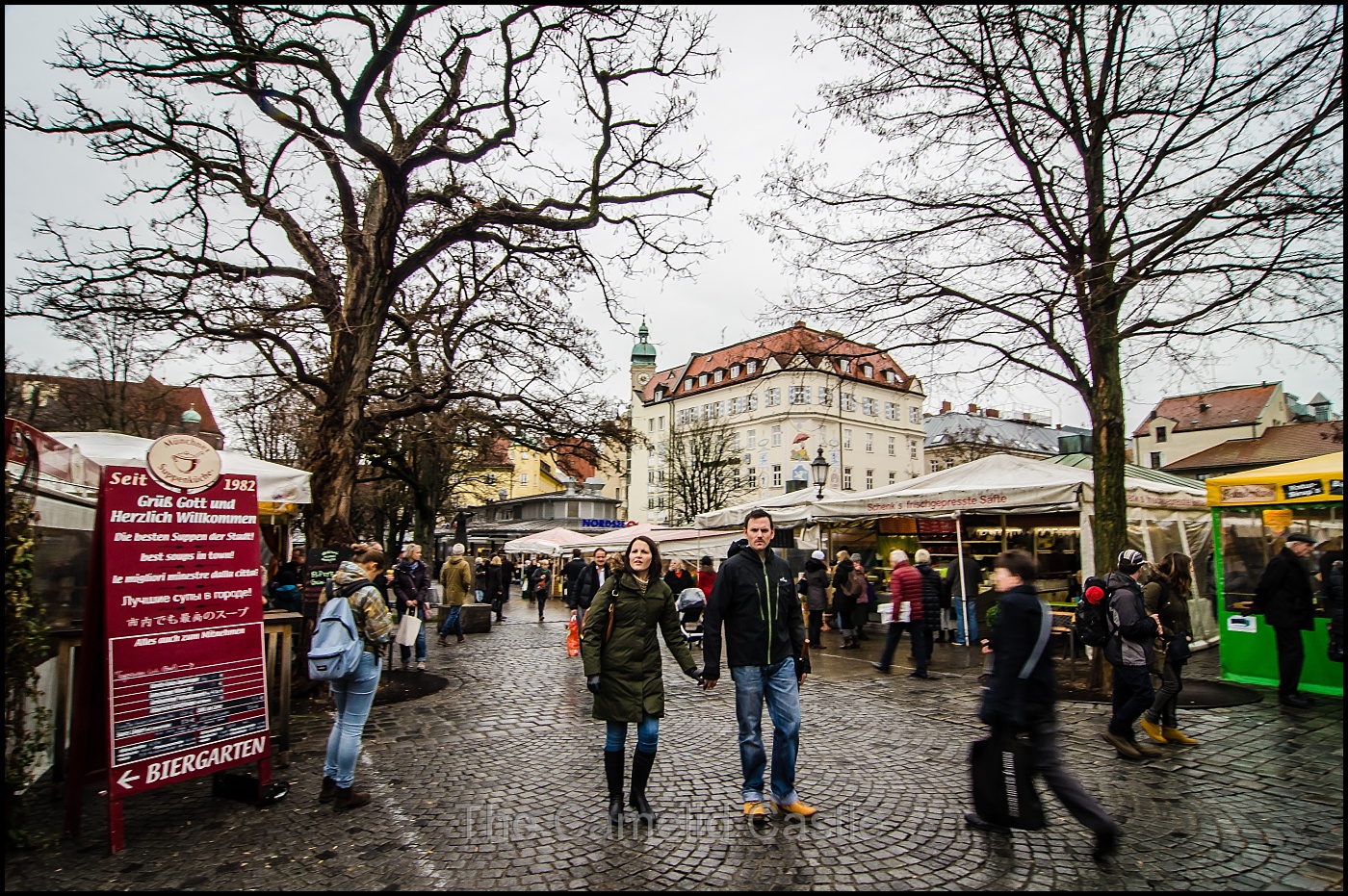 The kids have become quite big fans of Bayarische Brezen, the Bavarian large bread-pretzels that we had throughout Germany. Of course we smelt some delicious freshly baked ones, so bought a few. We then spied a coffee roasting house next to the bakery, offering a large coffee with a hand-made florentine.  All the adults couldn’t resist and it turned out to be an excellent coffee and the florentines were great too. The kids didn’t disagree. 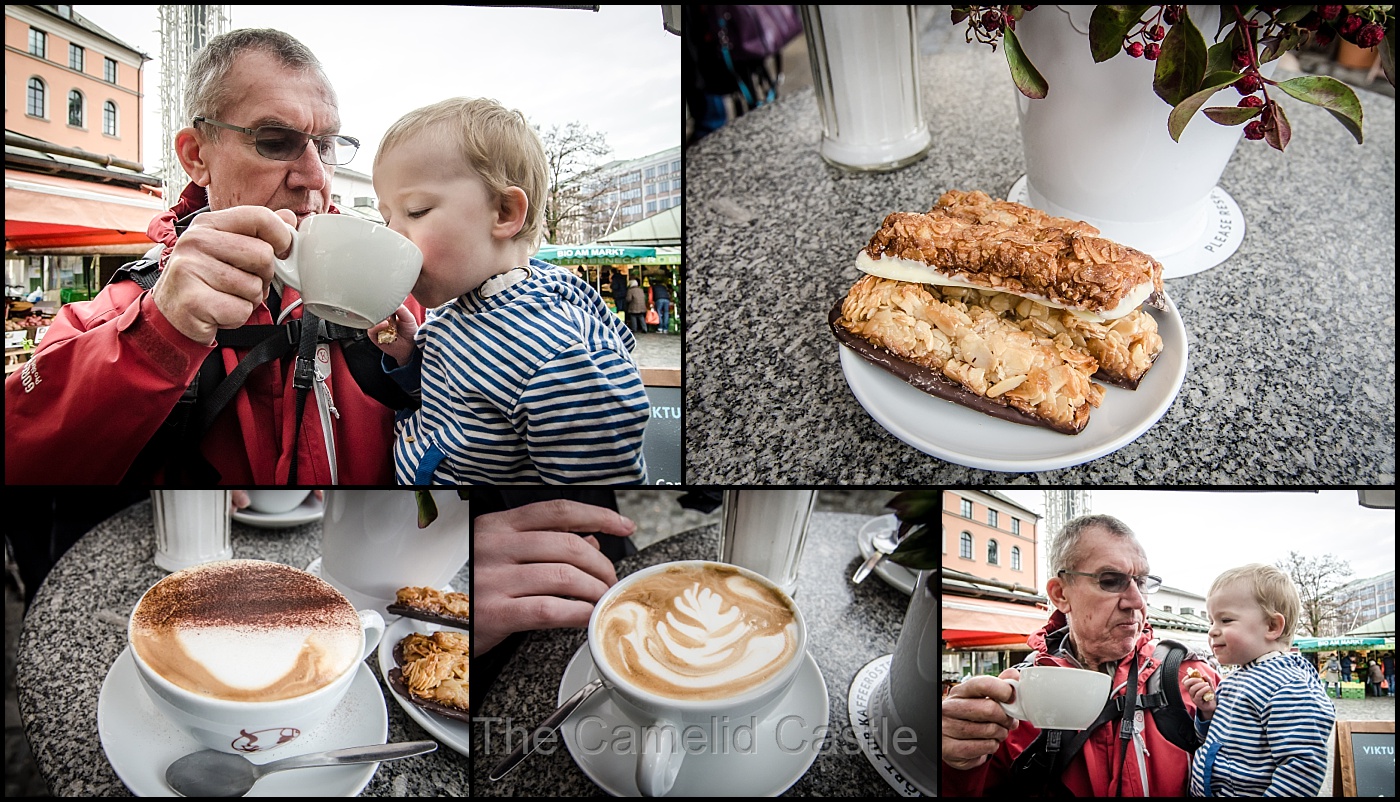 We could have wandered the market longer but Soren needed a rest and we were hoping for him to actually have his sleep back at the hotel today since we weren’t pushed for time.  We headed to the train through Marienplatz. Being a Saturday it was quite busy, and there were some bands performing.  We stopped for a quick look (and dance). 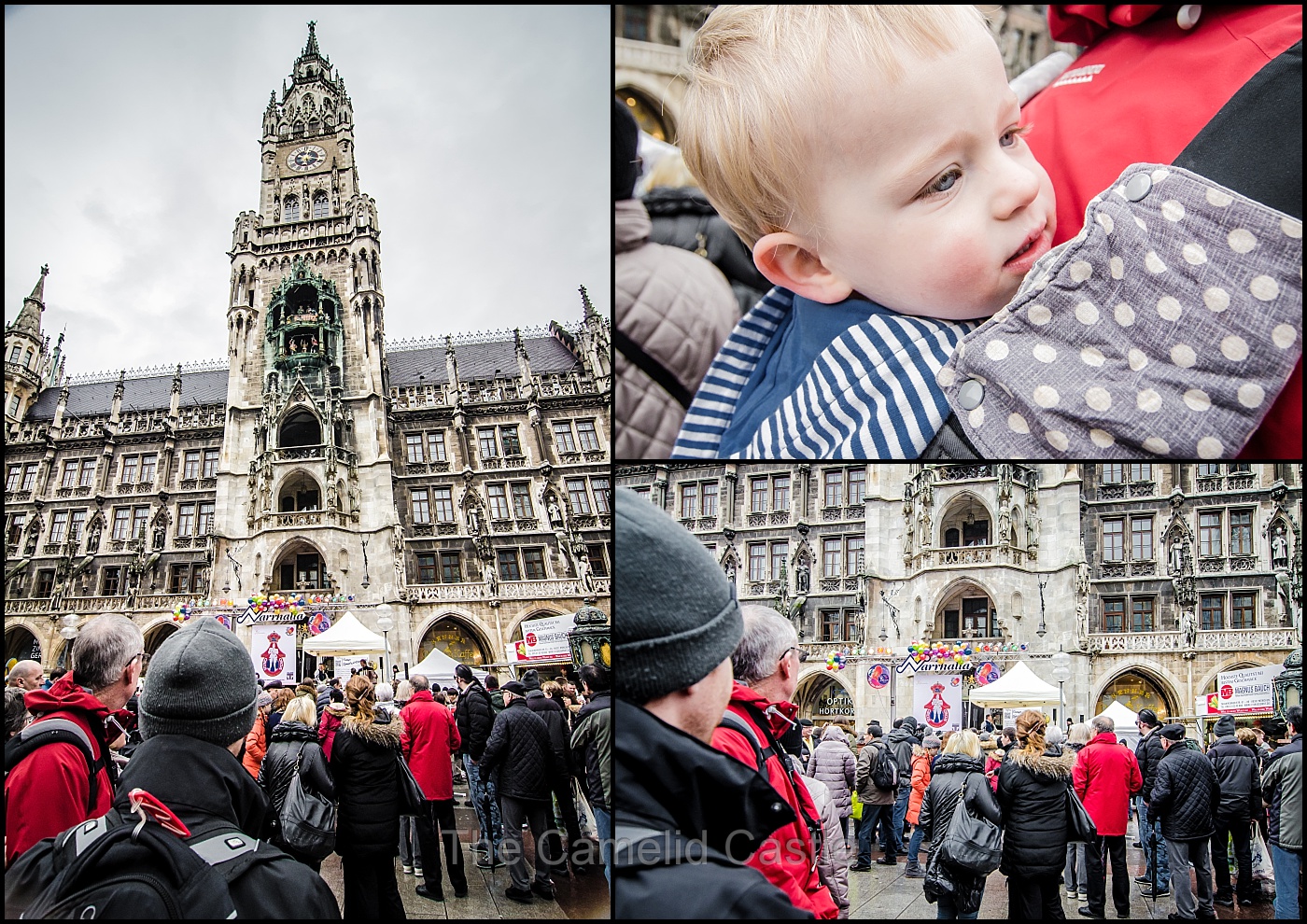 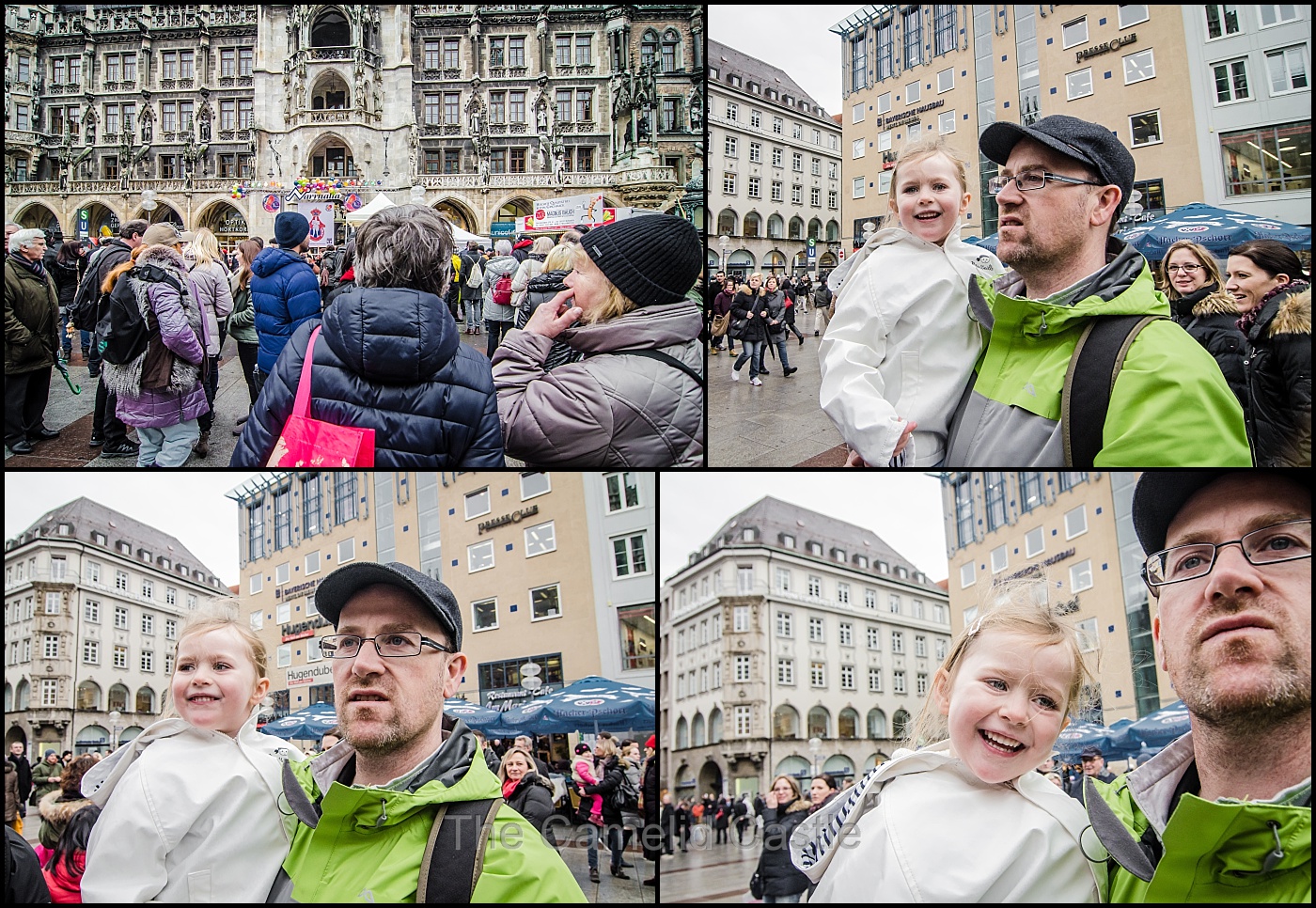 A quick train, and then walk, and we were back at the hotel.  Soren naturally resisted all attempts to make him go to sleep but eventually succumbed.  As much as we thought Astrid could also do with a rest, we didn’t want her up late that night, since we had an early start the next day.  Instead we snuck her out and down to the hotel pool while her brother was sleeping. He’d been busting for a swim but he really needed the sleep! I supervised the sleeping Soren while the others all took a dip.

After her swim, Astrid came back up to the room and ensured her brother didn’t stay asleep a great deal longer.  All trip we’ve been seeing the outdoor ice-rinks. The kids have wanted to go ice skating but we haven’t had a day where we’ve had the time. We thought we should try to fit it in while in Munich, and since we happened to find an ice rink in the city, we thought we should pay it a visit.

Gramps decided he didn’t want to ice skate so stayed at the hotel for a rest. The rest of us headed off towards Karlsplatz, but first stopped past a shopping mall (in the train station, as you do) to pick up some more cold weather gear. Mikl finally got water-proof shoes (only a month into the trip). After all the snow walking of the last week (with more to come) it was probably wise. We also got a new beanie for Astrid that was warmer than her current one, a scarf for Soren (because he keeps borrowing ours) and some more wool socks for Anto and I. With our current washing restrictions it is getting annoying wearing the same pair of wool socks for 3 days straight and they are much cheaper in Germany than at home!

Onwards we went (via train) to the ice rink. It was now quite cold and rather wet out, so we weren’t even sure if the ice skating was running. When we arrived at the rink there was no one on it, so it wasn’t looking good.  As we went around to the skate hire we realised that they were between sessions and skating was still going ahead. Both kids really wanted to skate but we didn’t think either would manage very well.  They didn’t have skates small enough for Soren – he has pretty small feet, so expecting tears and a tantrum, I subdued him with a lollipop (always wise to carry extra treats in your camera bag) and a promise of going upstairs to the viewing area to watch ‘A’.  Anto, with all his youth skating prowess, had ‘volunteered’ to take Astrid on, while Mikl and I supervised Soren, took photos of them falling over, and drank hot gluhwein.  Guess who got the better end of the deal!

With their skates fitted, they made their way out onto the rink, as the non-skaters headed upstairs to watch and drink our gluhwein – a genius idea having food and drink stands attached to the skate rink!  Astrid had seen all the ‘skate animals’ that are often provided at the rinks and had been hanging out to have one. This rink had ‘skate polar bears’ so she was chuffed to get one. 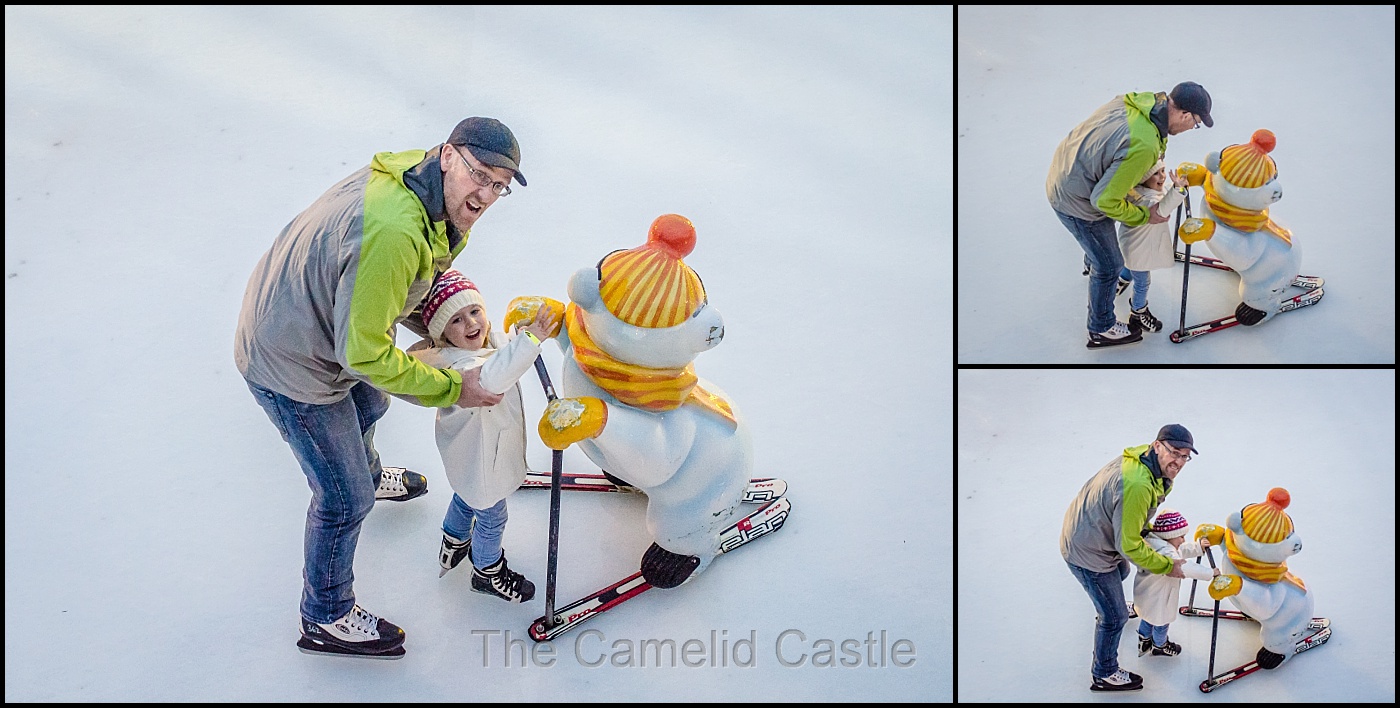 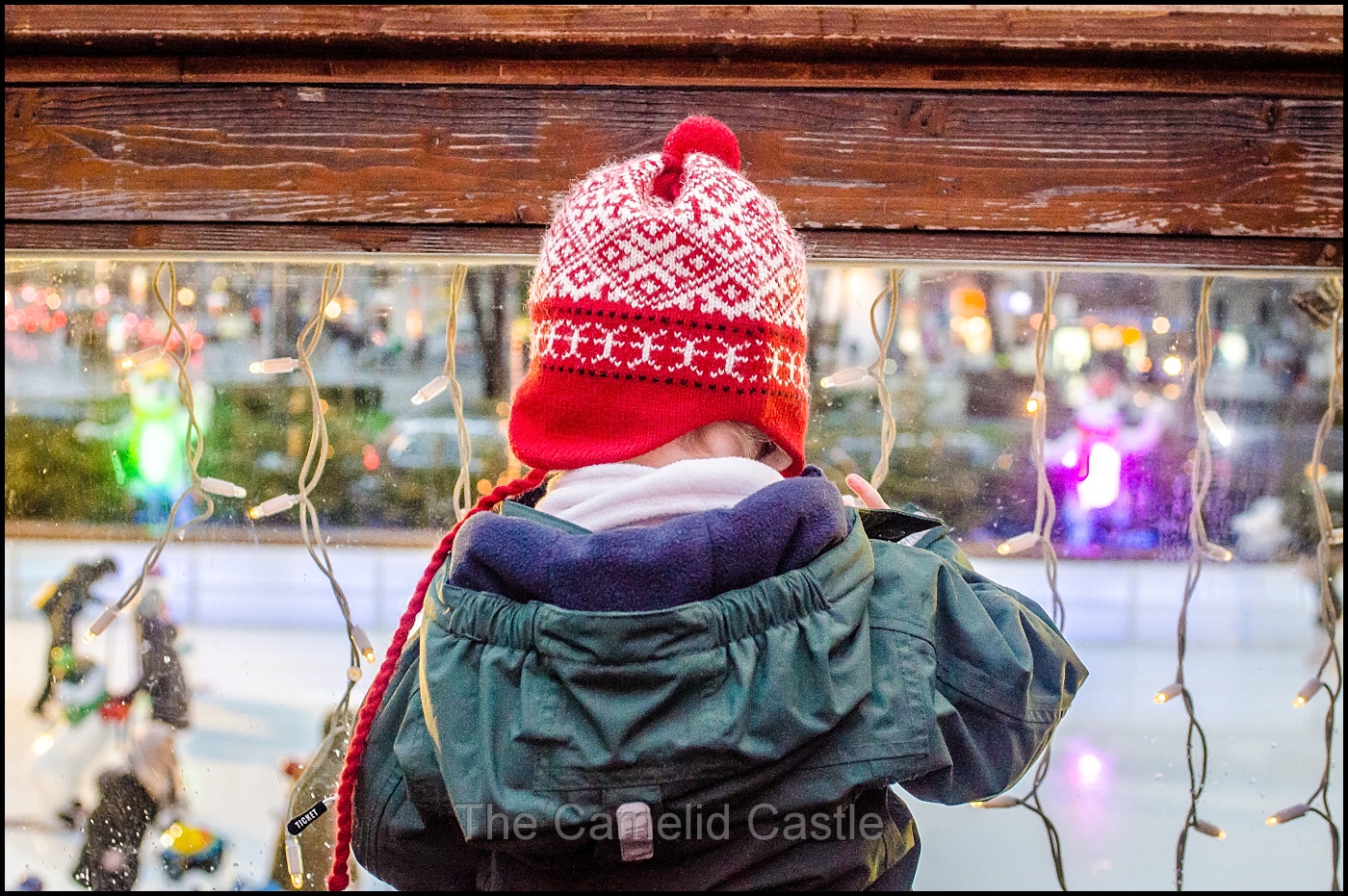 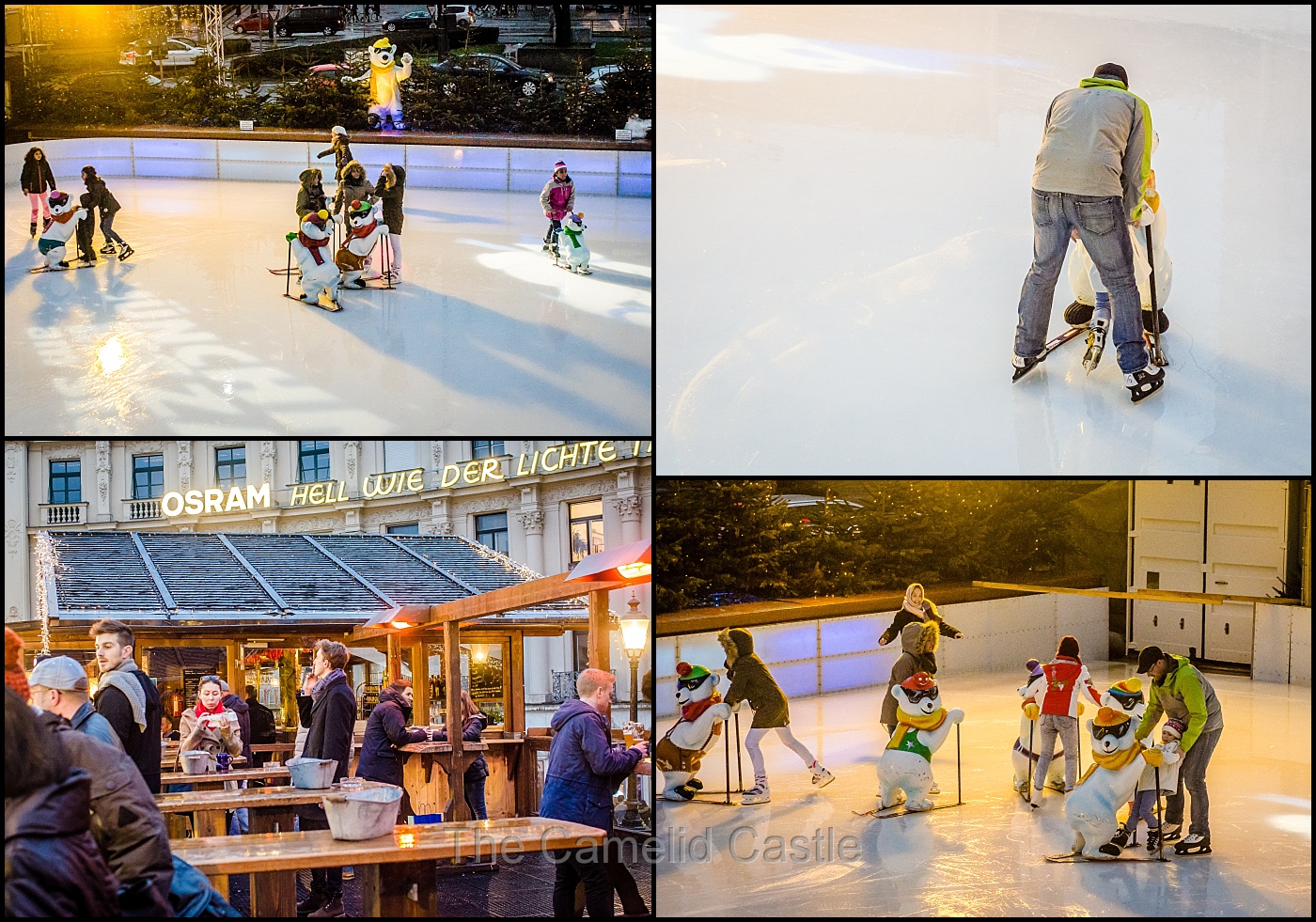 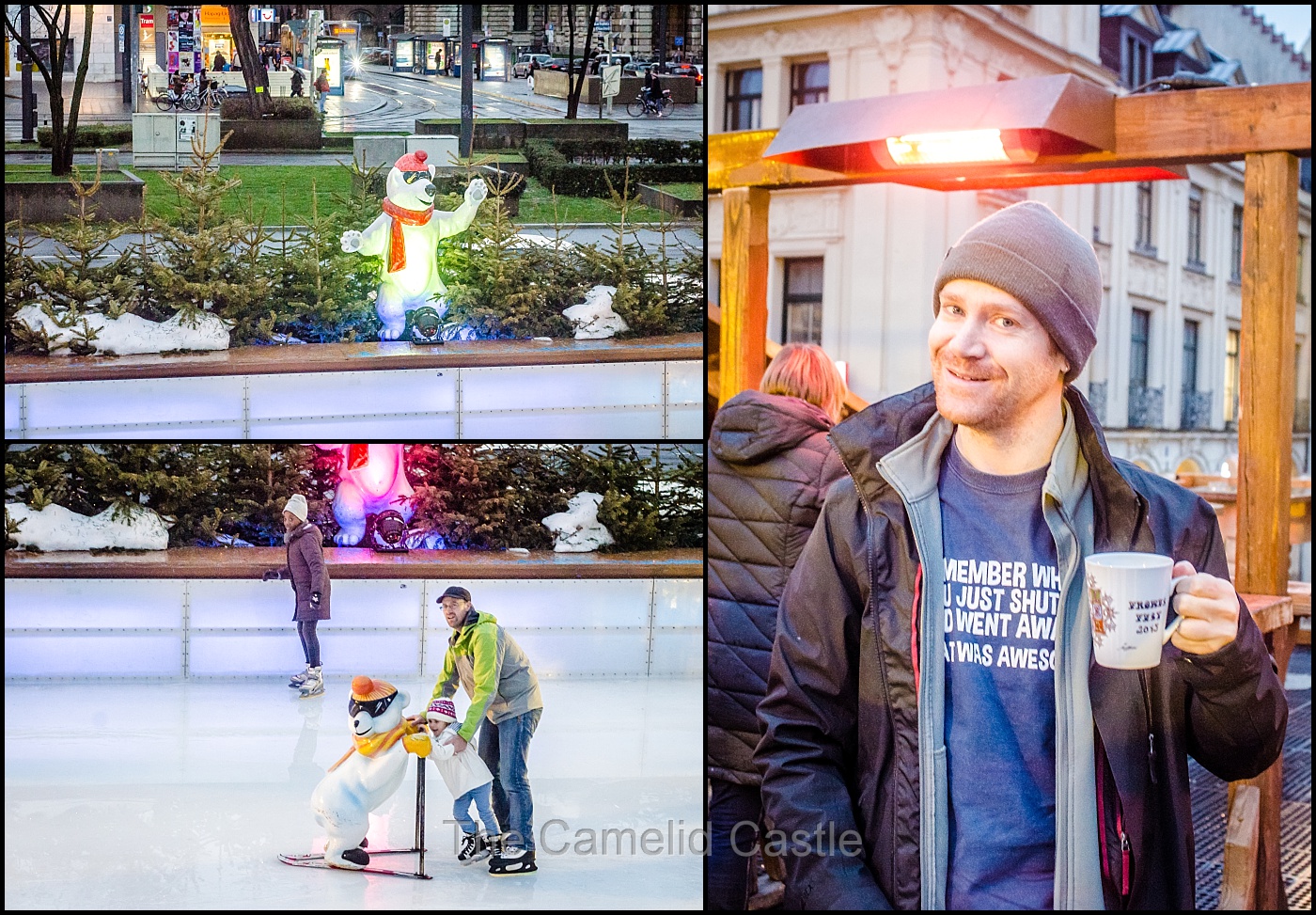 We’d warned Astrid that skating was harder than it looked.  For a child that is good at everything, she wasn’t very good at skating, but to her credit didn’t fall over (mostly due to Anto keeping her upright) and her perseverance……. and the polar bear.  I kind of expected her to crack it and want to go off after 5 minutes but she would do several laps and then go off for a rest while Anto skated a bit to stretch out his back, then back on. 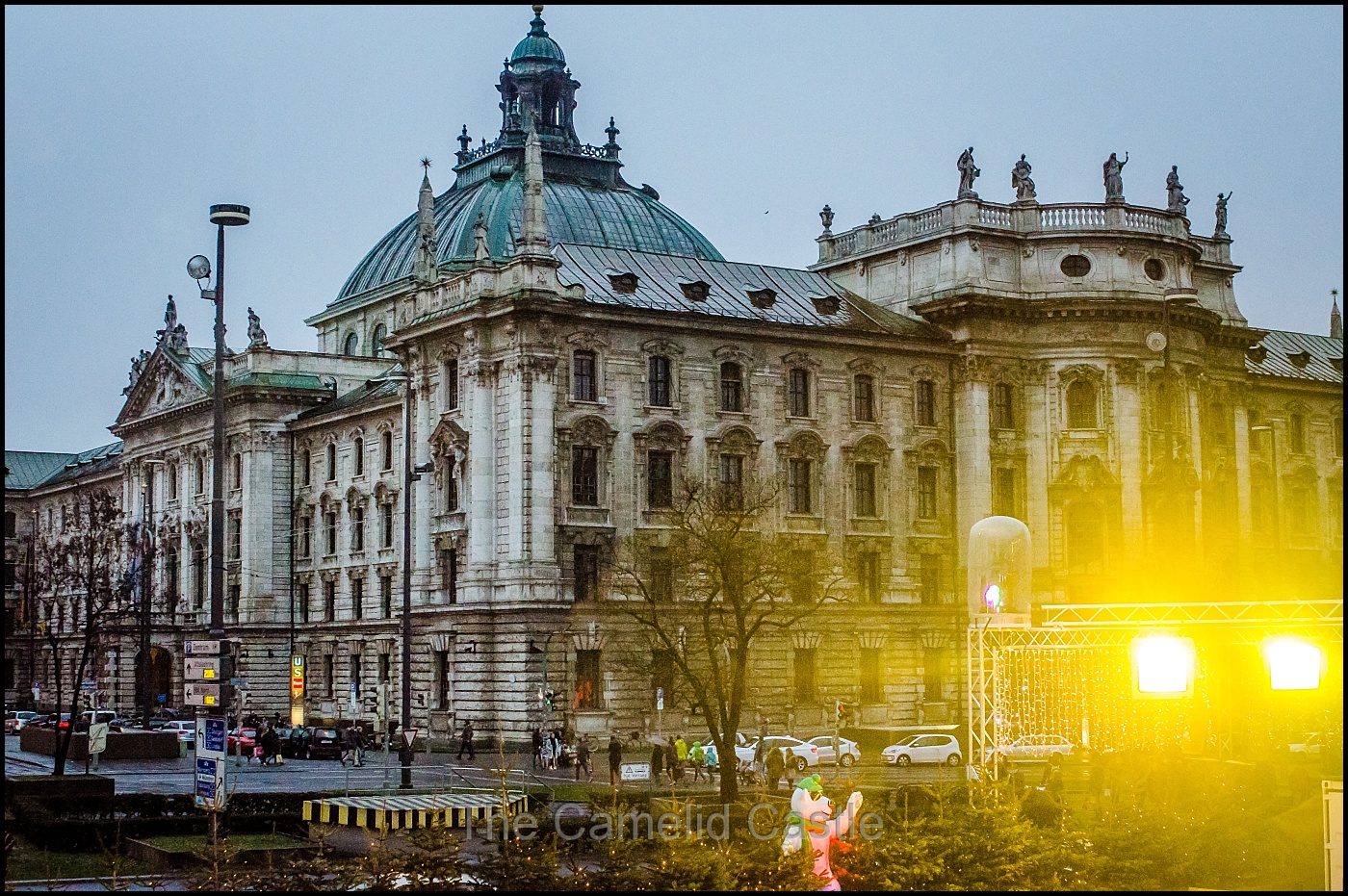 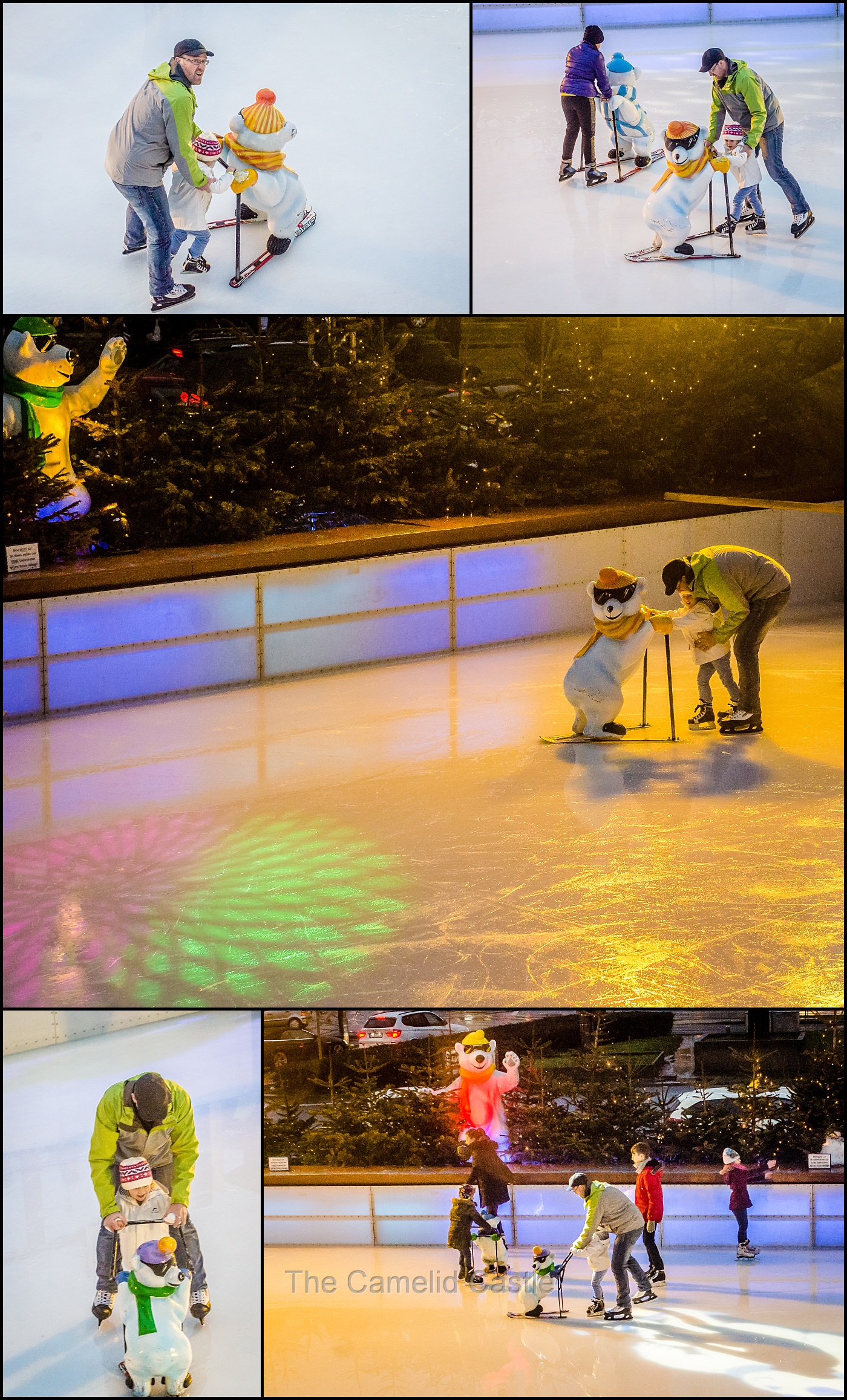 Anto was also seen skating with his very own polar bear, without a child in sight. He does claim he didn’t need the bear, and was seen occasionally skating backwards (slowly) without falling over. 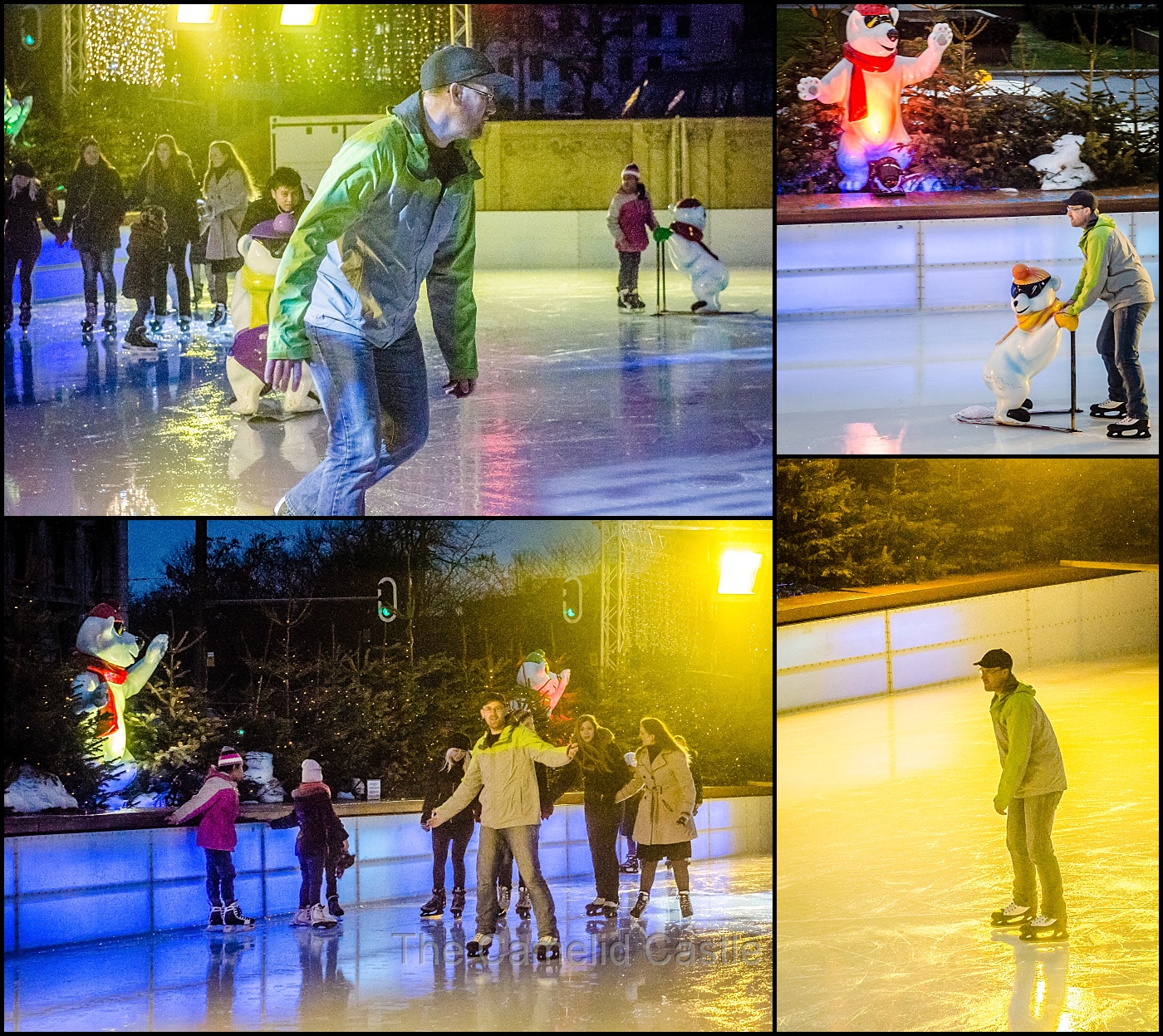 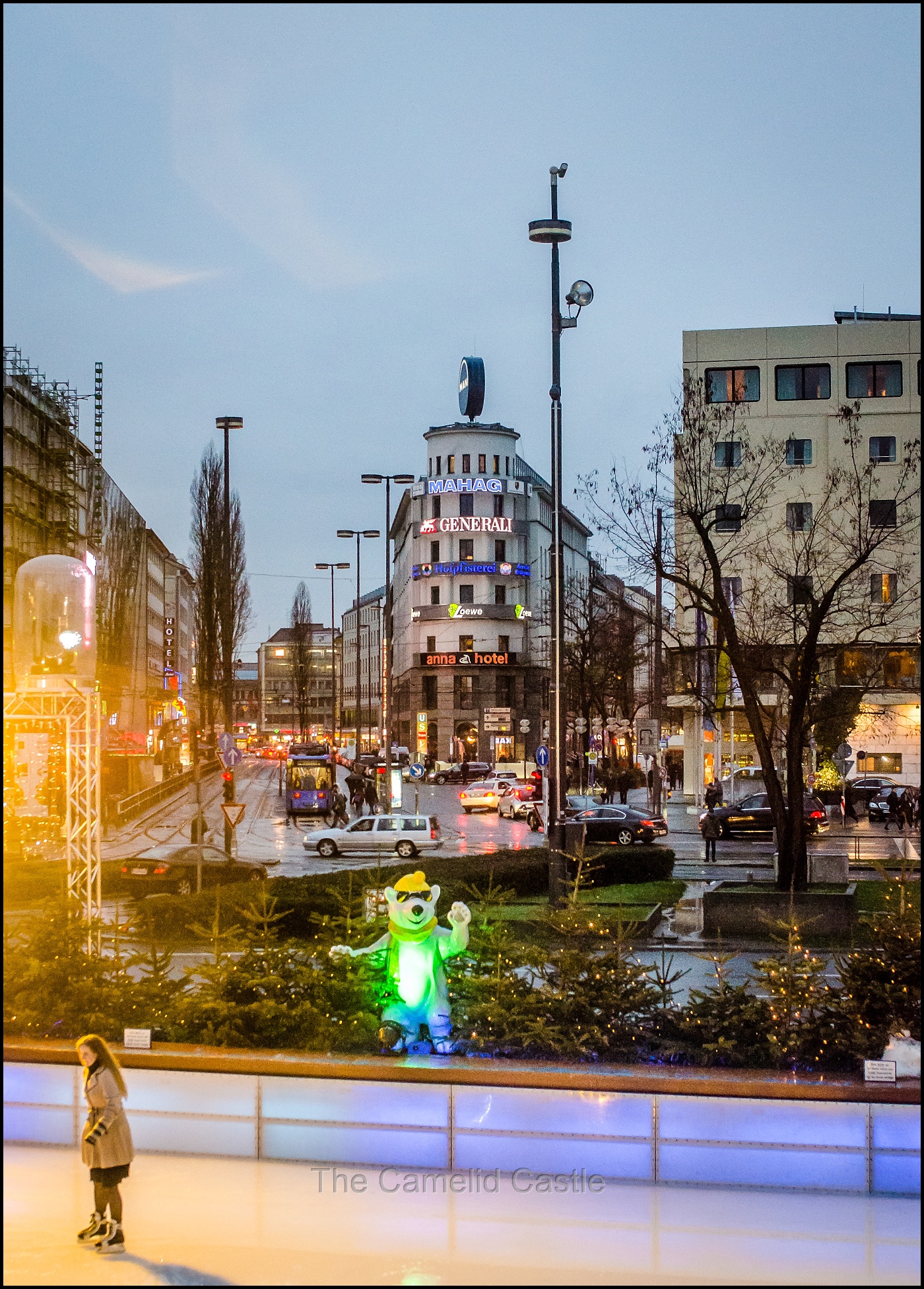 After a good half an hour we had to head off to dinner. It was now dark, very wet, and the ice was a little slushy. The sessions go for 3 hours, but there was no way either Astrid, nor Anto’s back could have lasted that long.  Astrid commented that ‘skating is harder than it looks’ but said she had a really good time.

We headed back via train and a walk to a German pub that we had read good reviews for, and was conveniently about 100 metres from our hotel. It turned out to be very nice indeed.  Anto and Mikl had pork knuckle with potato pancake and sauerkraut – apparently one of the top meals of the trip to date.  Alan had pork fillet with mushroom sauce and spetzel. I had some utterly untranslatable meal but it was a baked spetzel with smokey cheese and roast onions….. I think, anyway it was yum and it came with a salad, to lighten the stodginess.  The kids had fish sticks and potato salad. 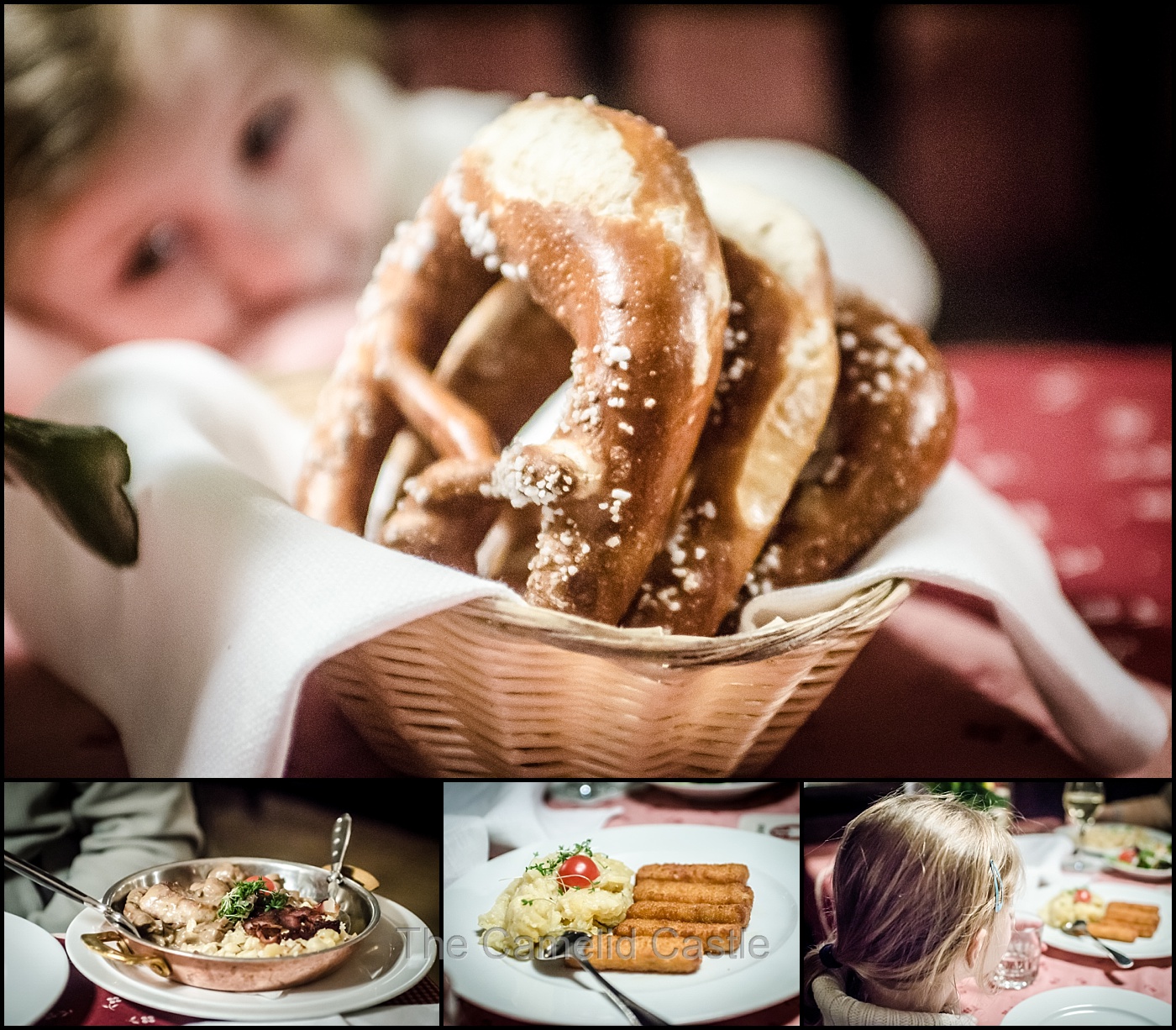 Dinner was washed down with beers and wine.  None of us were the least bit hungry but it was a couple of days since our last strudel, so apple strudel with vanilla sauce and ice cream was shared around before we all rolled up the street to the hotel, and a repack (again) before the early start the next day. 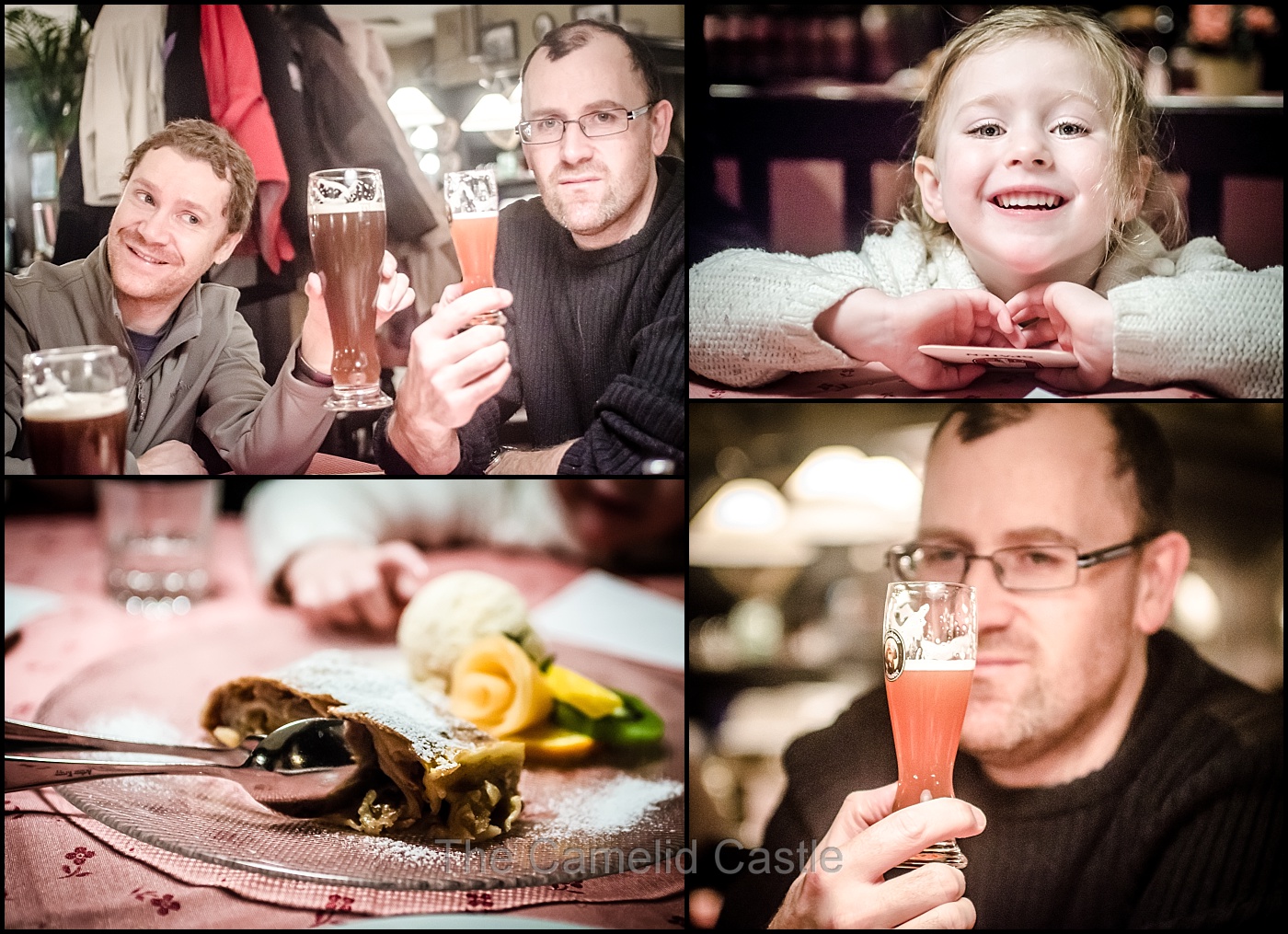 Statistics for Saturday the 9th of January, 2016 in Munich, Germany – the minimum temperature was three degrees, the maximum 6 degrees with a mean of 4 degrees.  The total walking for the day was 10.75km, with Astrid doing all of it, and not including her ice-skating (er shuffling!).