14 January 2016 – from a glorious snowy Innsbruck to more snow in Zürich, Switzerland

We were farewelling Austria (for the last time on this trip) and heading via a very scenic train trip to Zurich in Switzerland, where we planning to spend a couple of days exploring….. hopefully with more snow!

The church bells had us all up before 7am again, but as a bonus when the sun finally came up there was actually snow! It was minus 8 degrees but a beautiful clear day and we could see the mountains on both sides of Innsbruck, and blue sky……. These were the magnificent views from our apartment that morning. It was a struggle to pack up as we just didn’t want to leave! 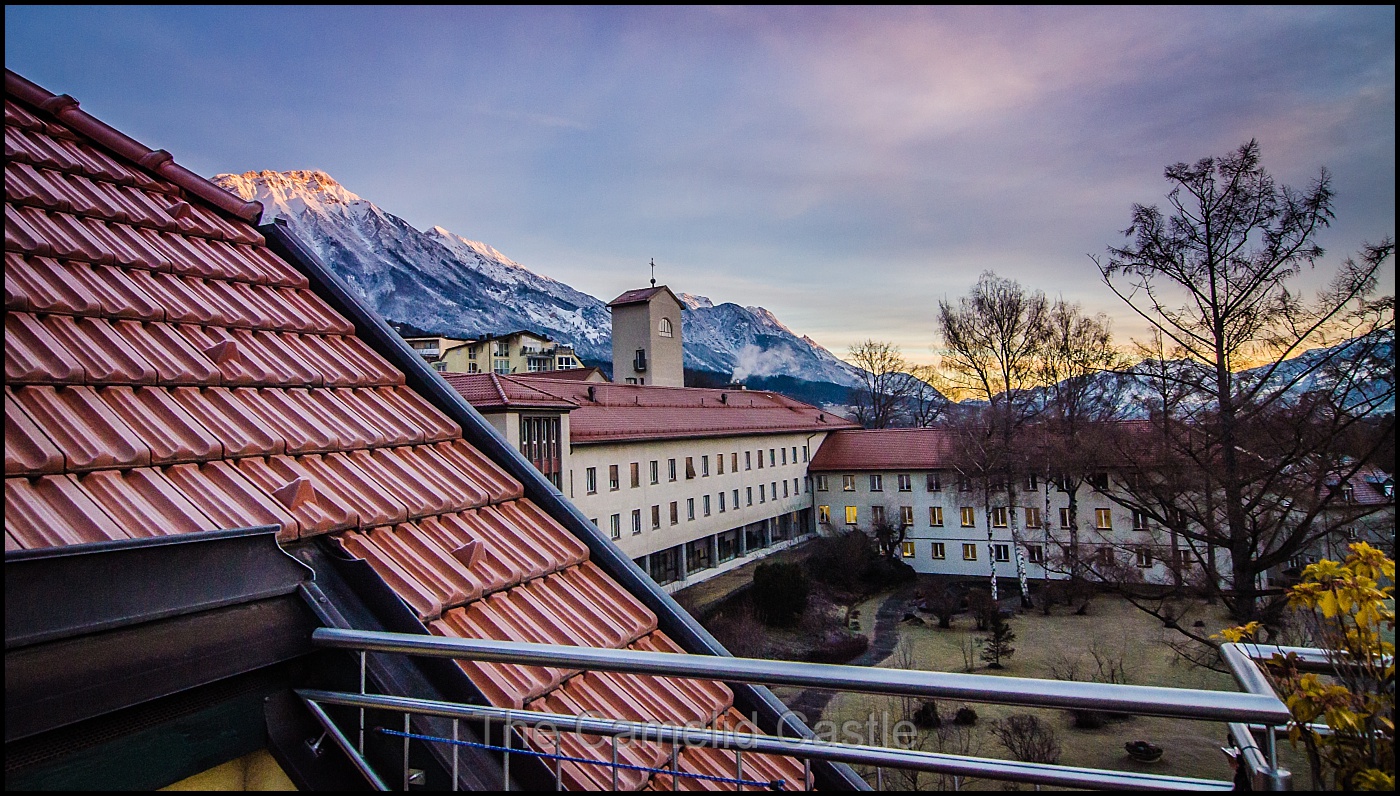 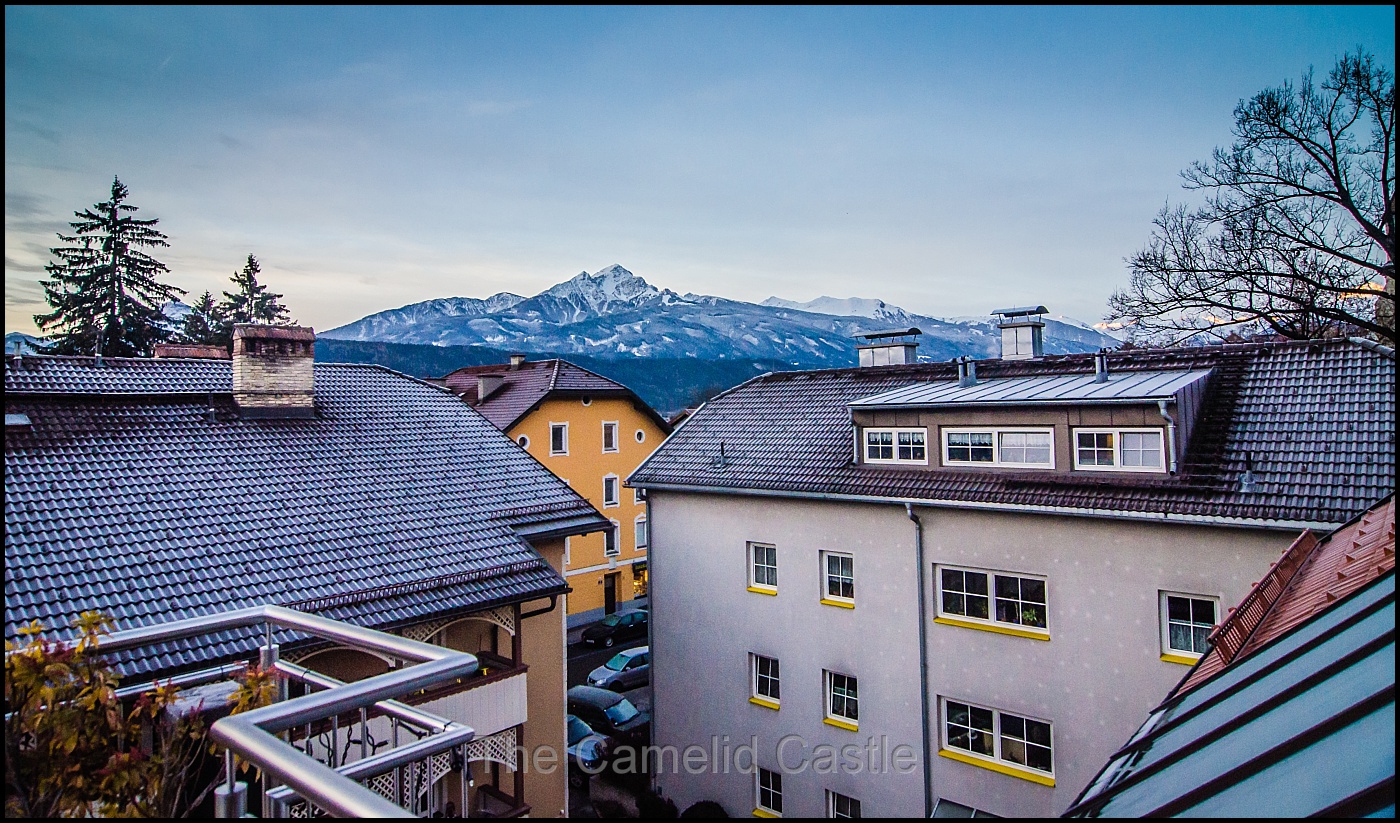 A quick breakfast was had and the final pack up and moving of luggage downstairs. This is always annoying with 4 flights of winding stairs!  The apartment was beautiful though and it would have been nice to stay longer and we might have gotten used to the church bells! During luggage movement kids were kept entertained by the apartment block ginger cat who had been trying to get in every night while we were doing washing. He like pats, but was slightly less fond of enthusiastic 2 and 4 year olds whose own cats are rather tolerant.

At 8.30am we were across the road and waiting for the bus, which took us straight into central. The buses coming every 10 mins meant that we found the public transport in Innsbruck extremely efficient.  We managed to get all our bags off the bus, locate our train platform and be ready with 40 mins to go.  I decided to go for a walk to see if I could get some good shots of the mountains, since it was the first clear day we’d had. I couldn’t wander too far from the train station but it was tempting to can the idea of going to Zürich and just stay put in Innsbruck for the day.  I think we all wanted to go back up the mountains and play in the snow rather than sit on a train for 4 hours. The clear weather did bode well for our scenic trip to Zürich though. 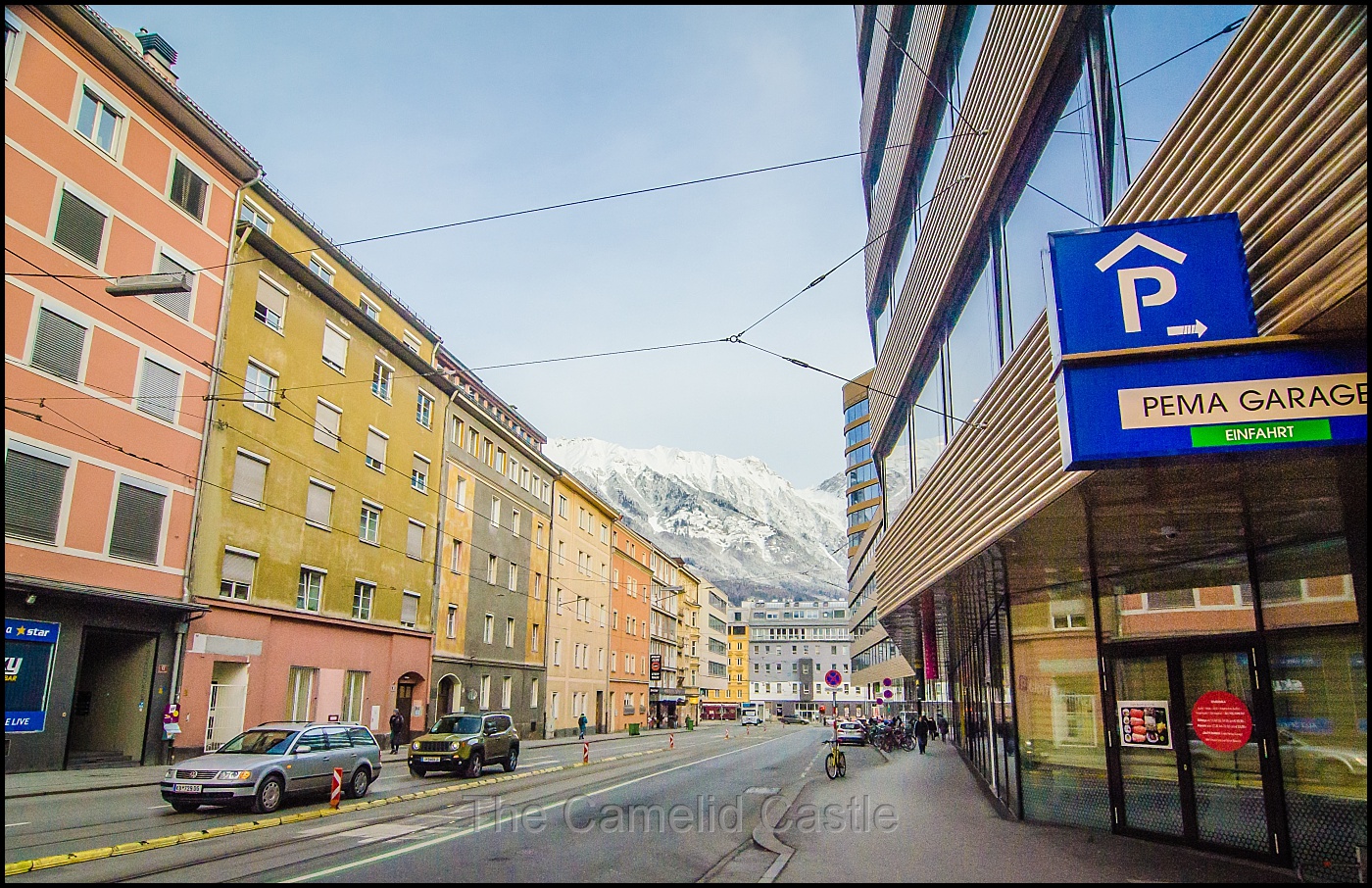 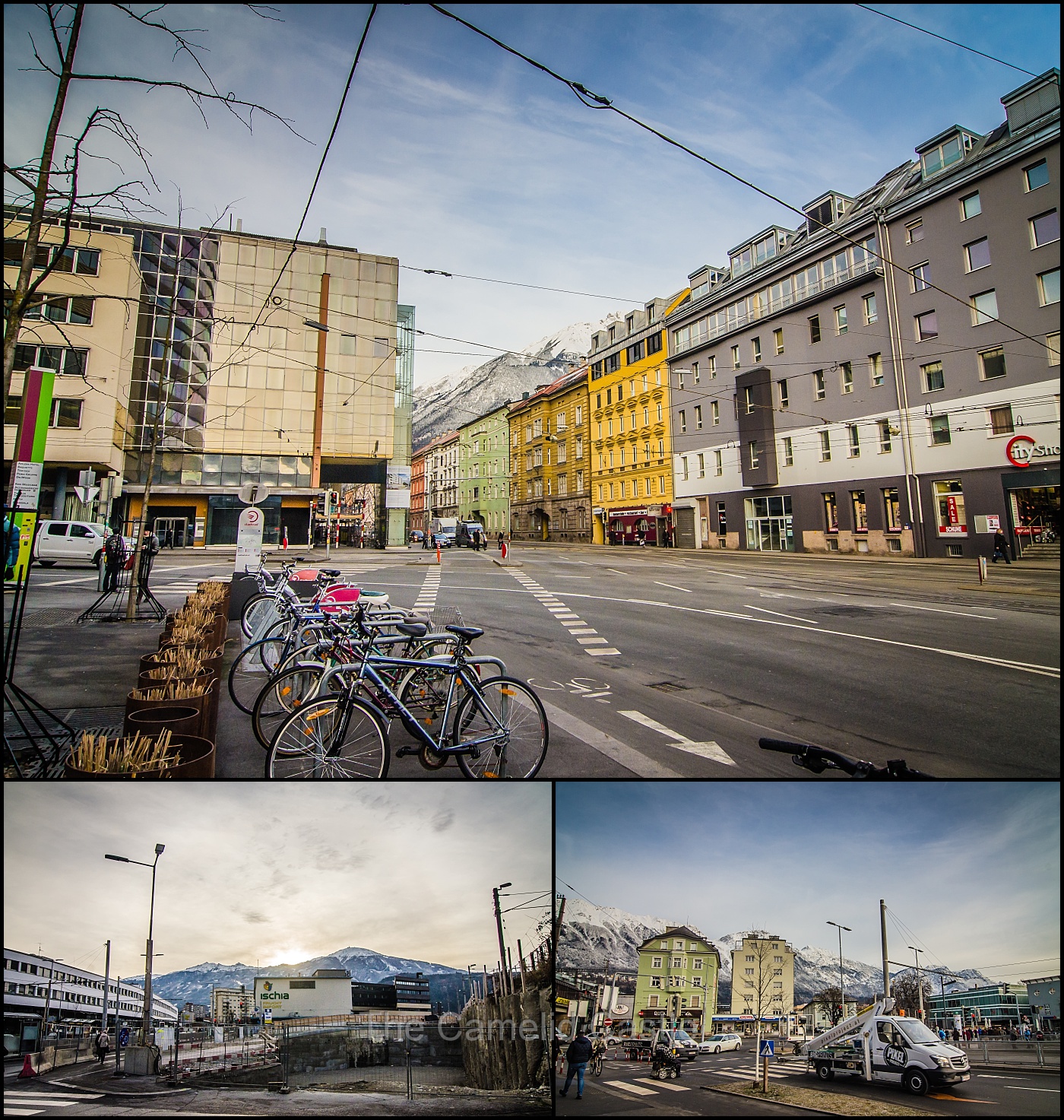 Alan and I picked up some pastries and coffees for the long train trip and to warm up those waiting on the platform, who were apparently a bit cold since it was now minus 9 degrees.

The train was on time which was lucky as we were getting pretty cold standing around. It had come through from Vienna but wasn’t too packed. We were in first class for this trip, which was nice with the extra space, although the rest of the cabin were probably less impressed with noisy kids in the cabin. The train departed at 9.44am and we settled in for a long trip, with the kids watching TV and generally being loud.  It was very snowy heading out of Innsbruck but so pretty with all the little villages with snow-covered houses. 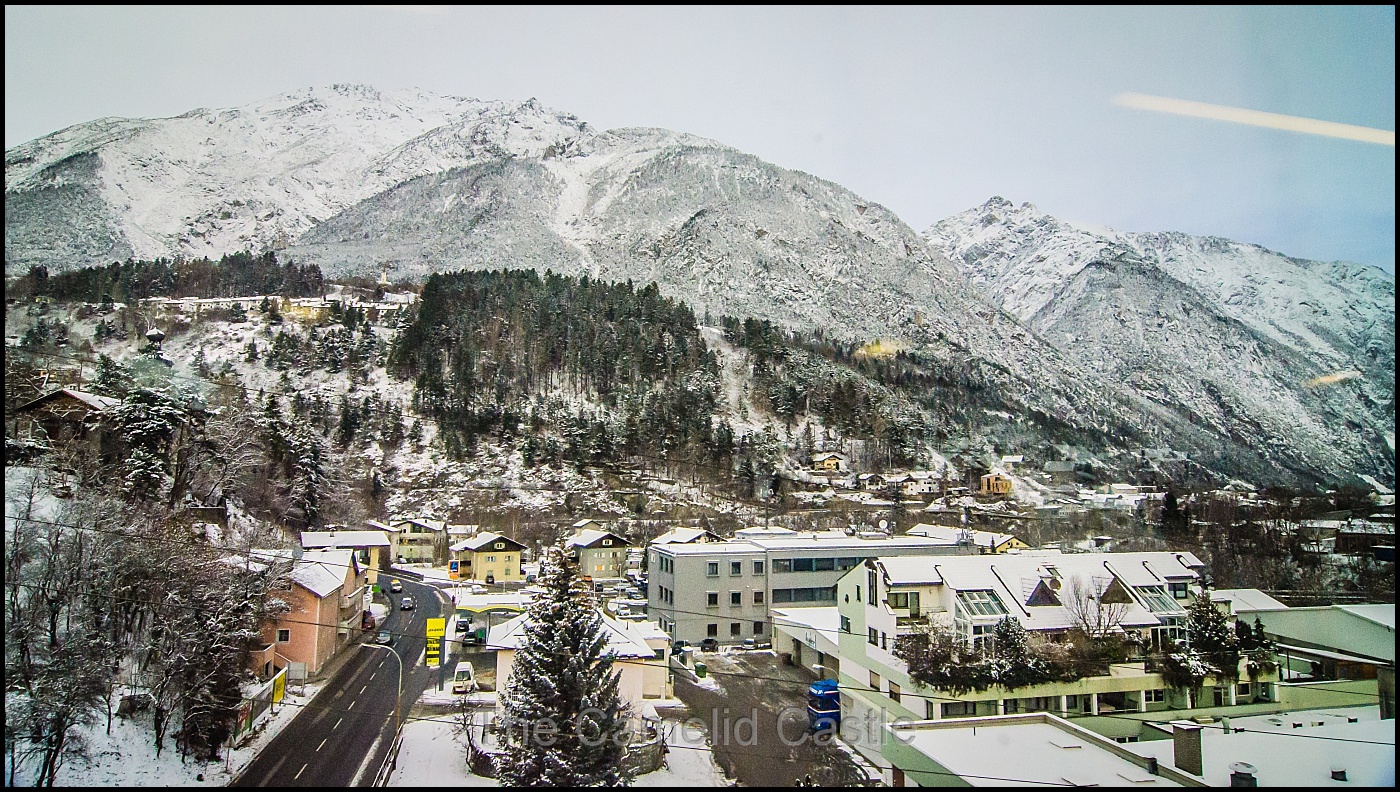 The scenery was very impressive. The train mostly rand through the valleys, with large mountains either side, at times though we climbed some mountains and got great views back over the valleys and towns. It was hard to get good photos from the train though with all the tunnels and trees at inopportune moments. 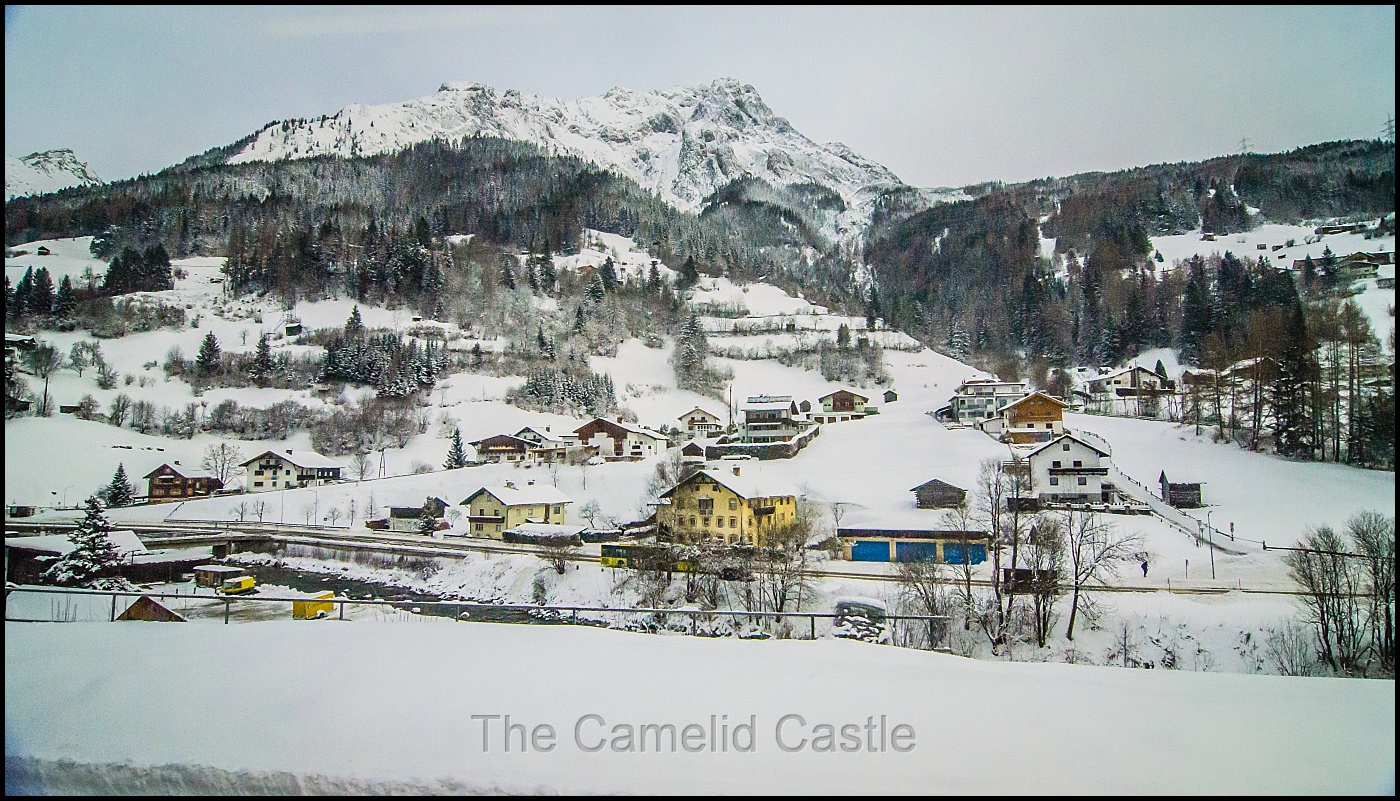 We were all hungry (presumably from all the sitting around looking at pretty scenery) so ate our bread rolls that we had made in the apartment that morning by 11am. Despite being exhausted Astrid didn’t have much of a rest. Soren was really tired and was refusing  to sleep, so we tried our old trick of putting him in the ergo on me then Anto, who ultimately had to walk around with him, and finally won the sleep battle with a bit under an hour to go.

When we crossed the border and stopped at the first station in Switzerland, Buchs,  a whole heap of  Swiss border police piled onto train but paid no attention whatsoever to us or anyone else in our cabin. It was also obvious we had now reached Switzerland because this is where the free internet ended, like everything in Switzerland, it’s the land of expensive. The train also pulled out of the station in the same direction we had entered so we were now back-tracking slightly, but also going in the opposite direction to what he had been for the past few hours, which was rather off-putting.

There obviously hadn’t been as much snow in this area of Switzerland as we were back to green fields with only sprinkles of snow and some snowy peaks behind.  On our 2012 visit to Switzerland we’d traveled to and from Paris, so hadn’t come into Zürich from this direction. It was an impressive sight travelling right next to the enormous Lake Zürich as the train approached the city. 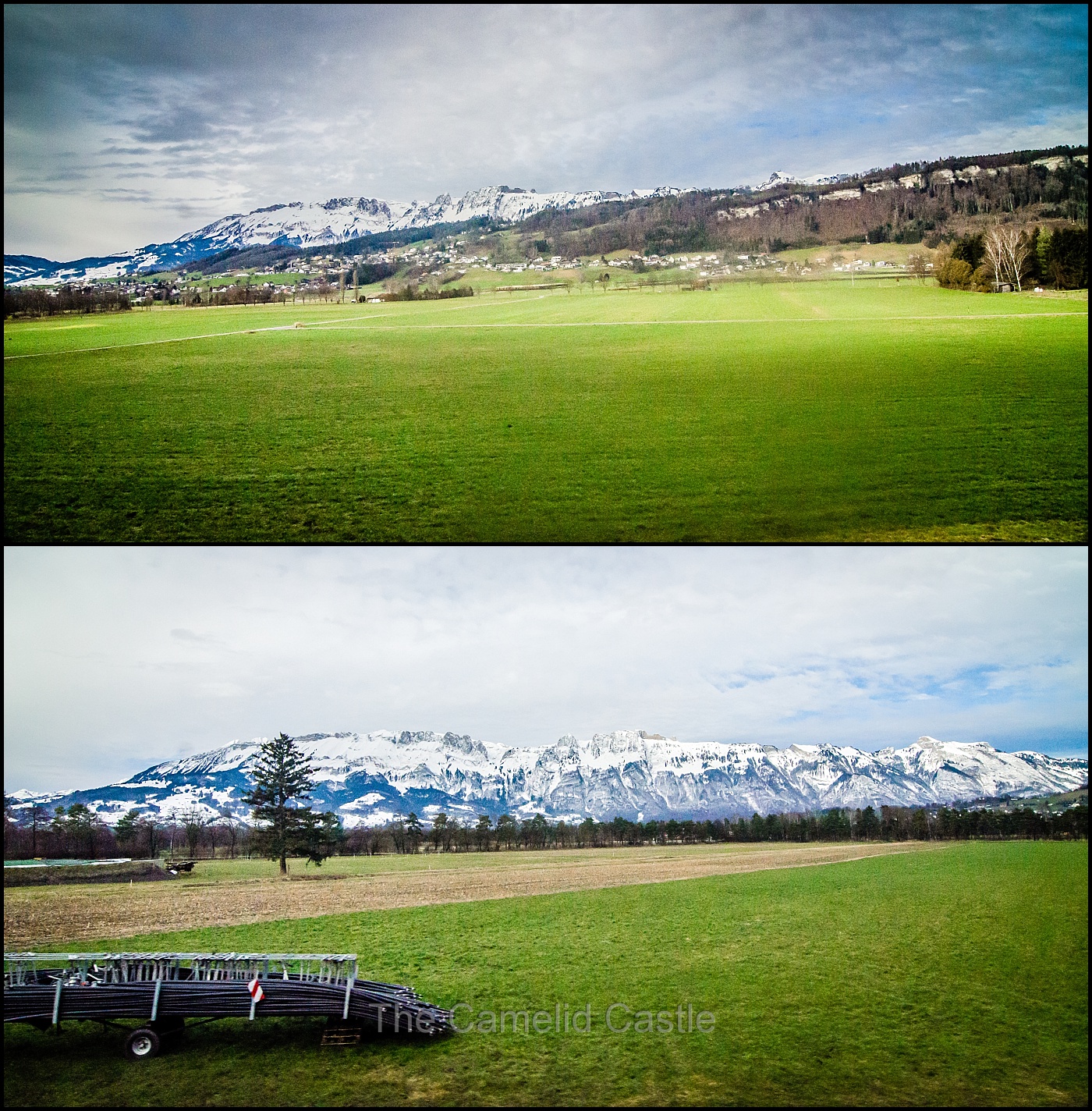 We pulled into Zürich central at 1.30pm and bought our day train tickets.  We had decided to catch the train one stop down to reduce the walking with bags (it was several kilometres to our hotel).  The hotel was actually not too far past the other end of the train station but Zürich HB is enormous so it wasn’t an easy walk. Luckily pretty much half the intercity trains run through the stop we wanted (Hardbrucke) so it was a quick trip. The difficult bit was figuring out how to get out of the train station which seemed to involve going up and down in lifts and elevators several times to get across the tracks.

Like the last time we were in Zürich, we were standing at train stations with snow fluttering in. It’s good that at least Zürich consistently turns on the snow for us! We finally got out of station and walked the 400m to the hotel, the Ibis City West. The kids were kept amused through the walk by the snow falling on their heads.

It was quickly up to our rooms to dump our bags and get gloves on before heading out for an explore. We had to back-track to central the way we had just come, but it was much more efficient without luggage.  Anto, Astrid and I had been to Zürich before but none of the others had, so we started off with a wander down the famous Bahnhofstrasse (which if your German is even mediocre you would guess means train station street).  It runs directly from the hauptbahnhof and is where all of the high-end stores live, as well as lots of lights, and animated store front signs which kept us amused.

We then walked over the Limmat River and into the old town. Zürich old town is lovely, and very easy to get lost in. It’s not huge and runs parallel to the river, so you won’t get too lost but if feels like you are constantly walking up and down hills and through twisting little cobblestone alleys. 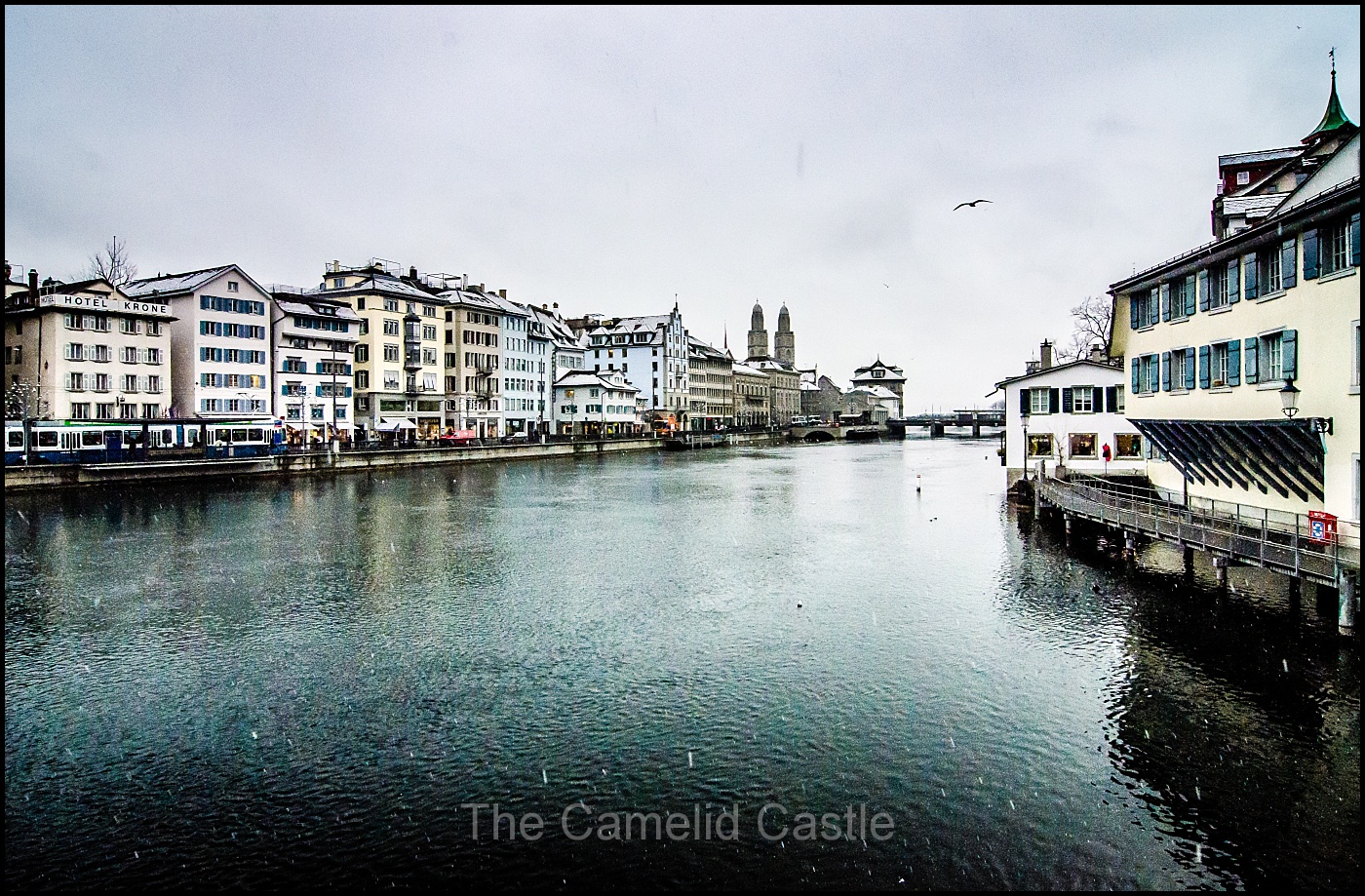 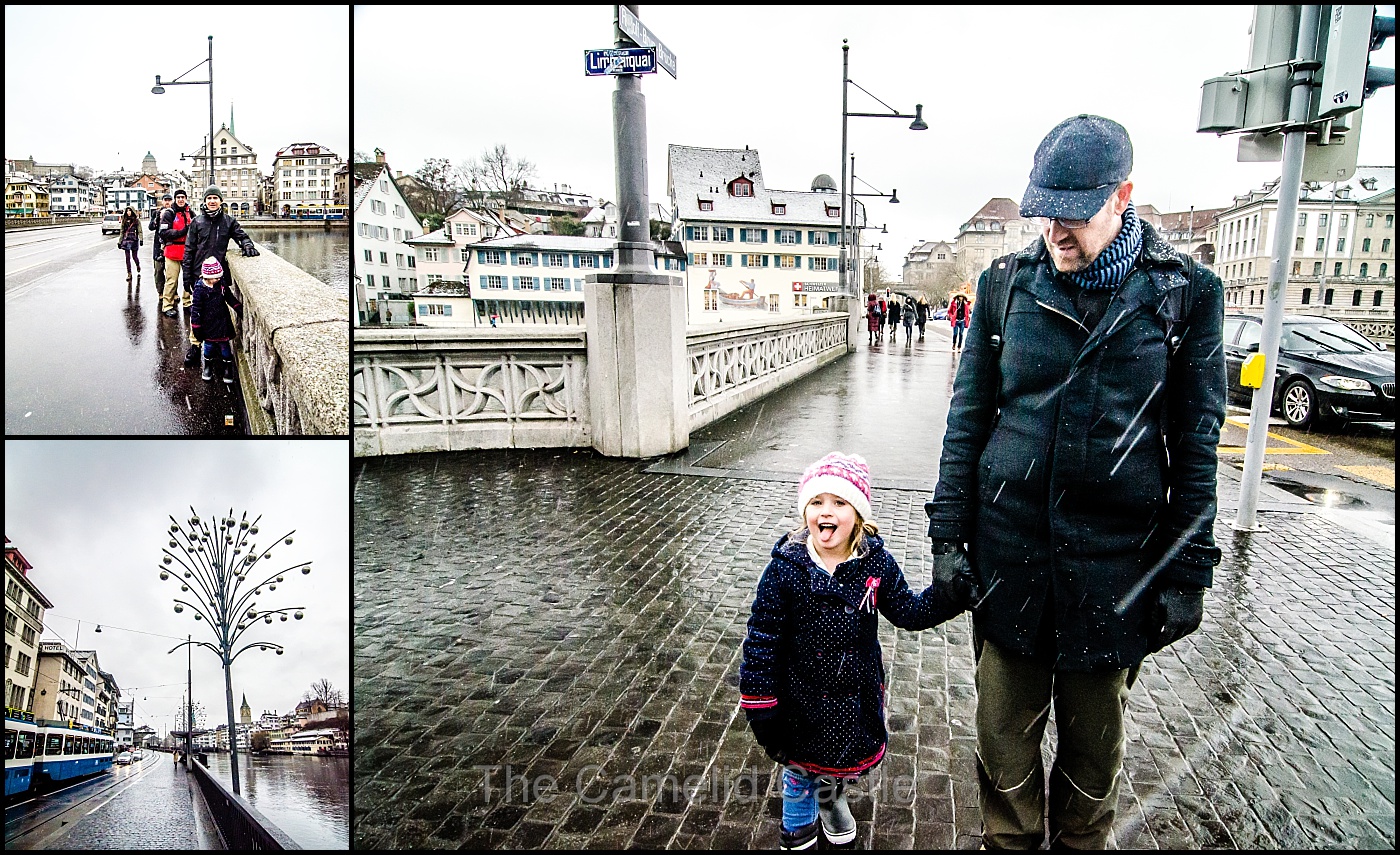 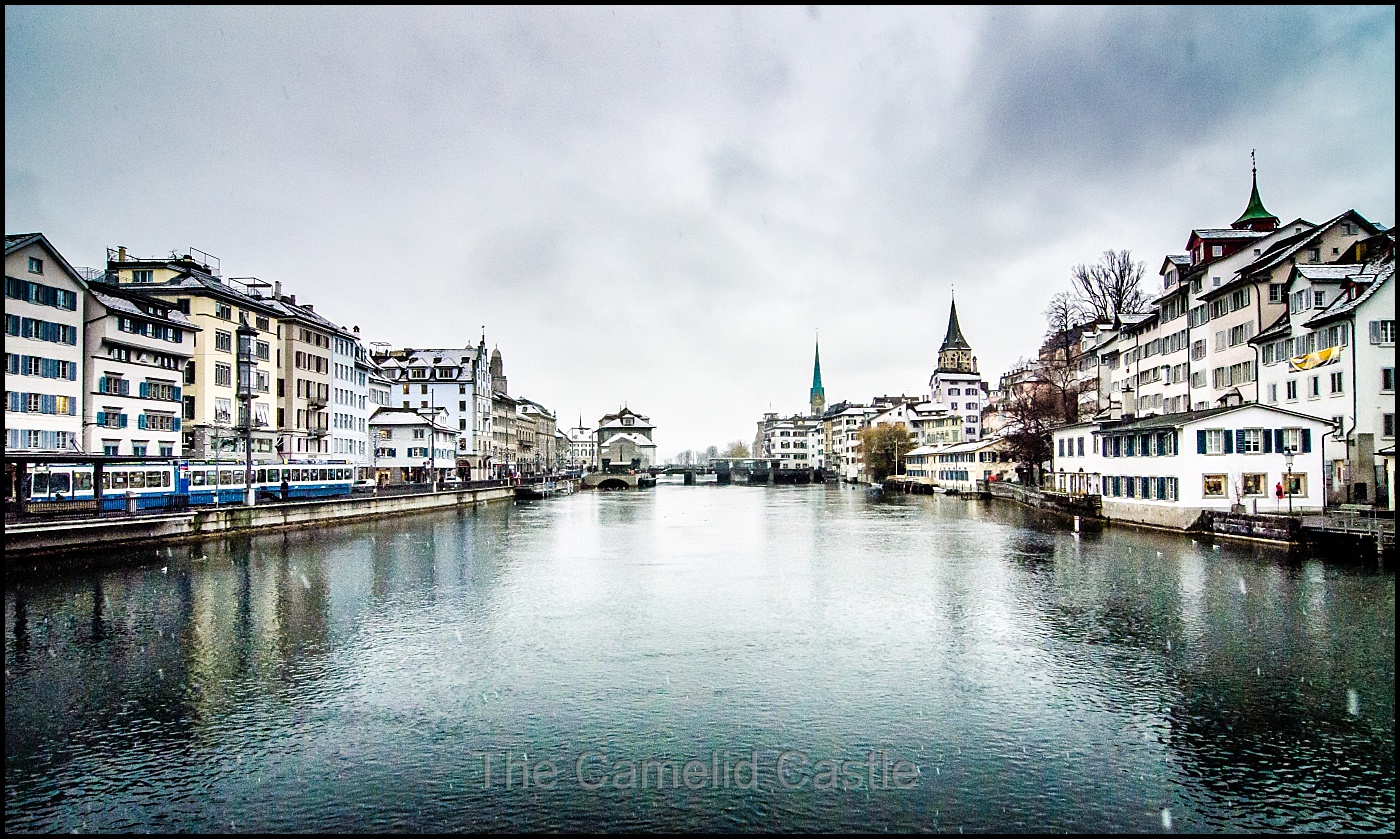 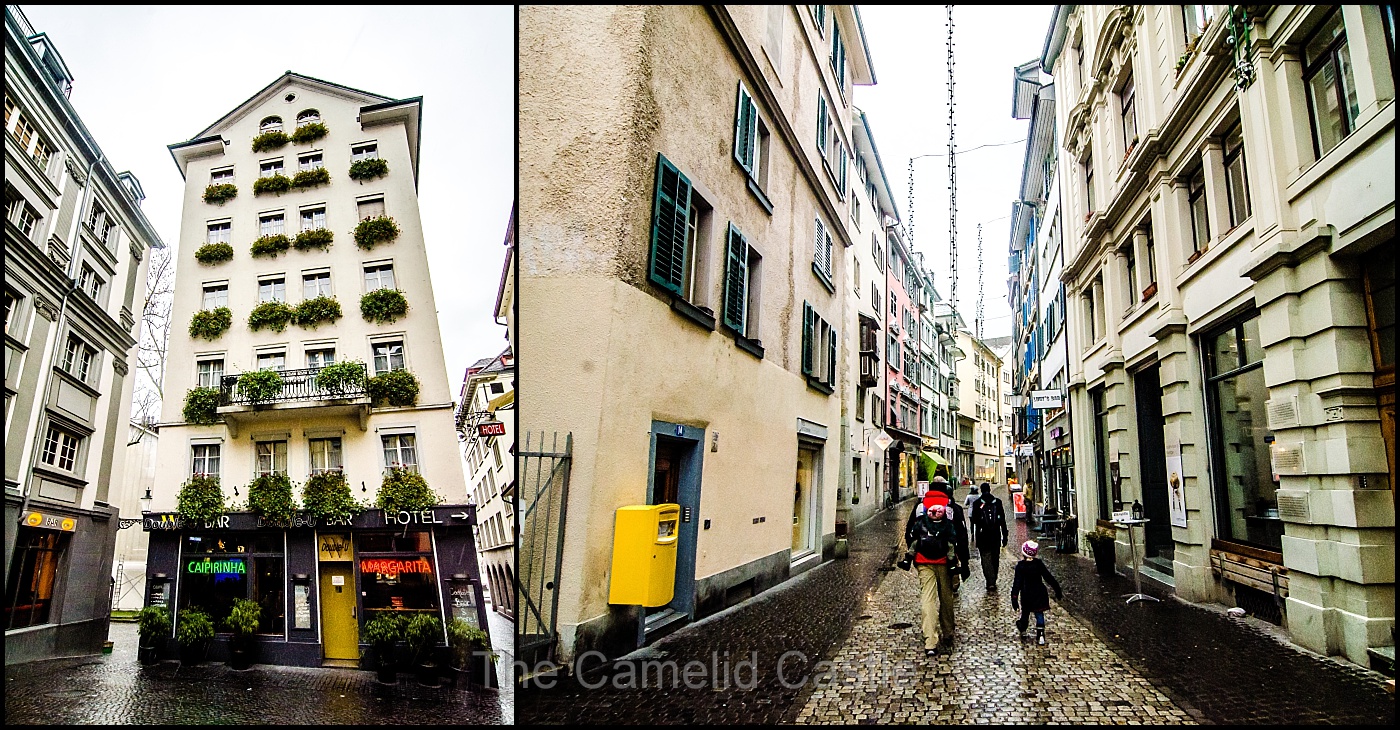 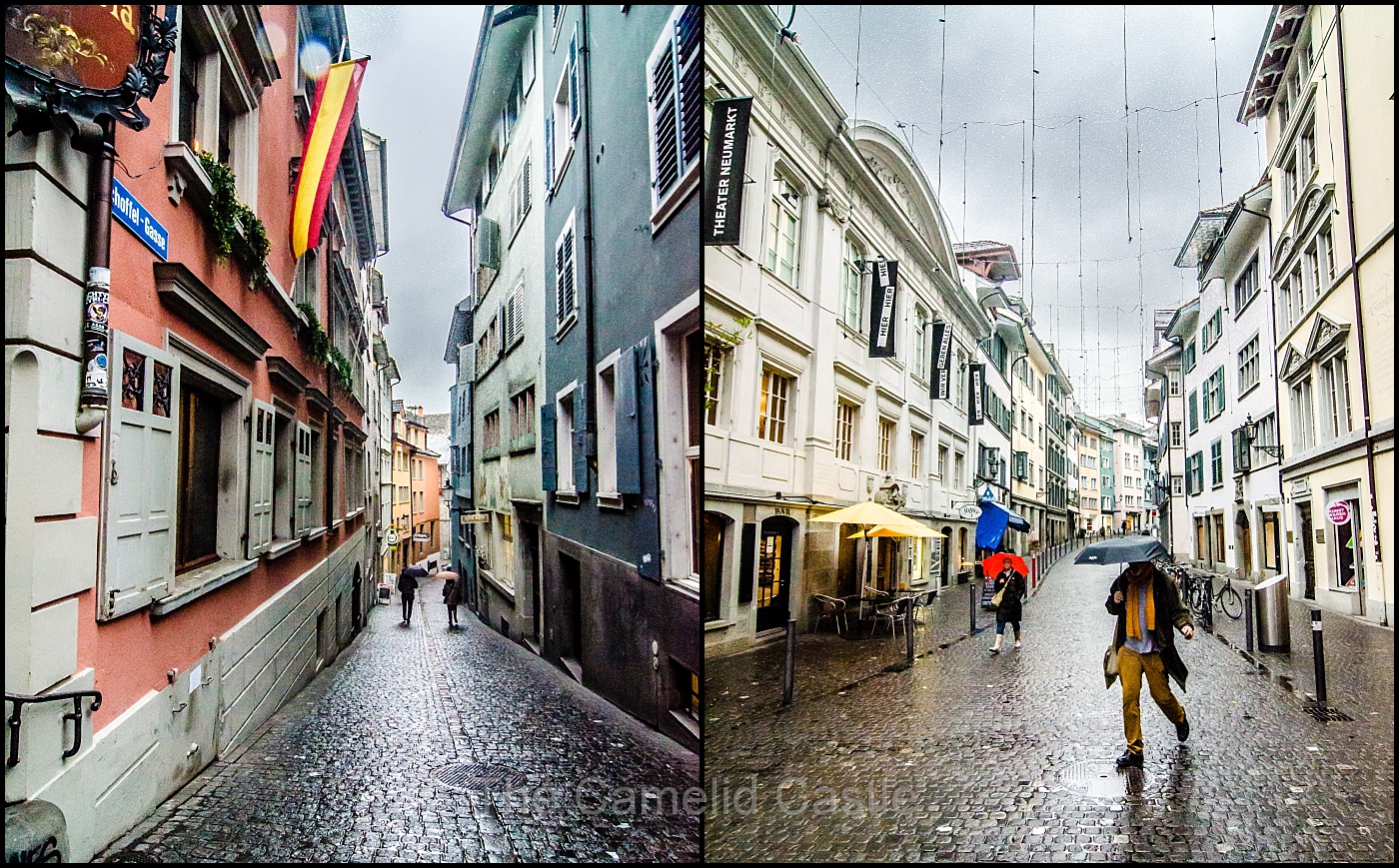 As we were walking the snow was constantly fluttering down which the kids enjoyed, they clearly weren’t bored of snow yet!  There was lots of snow settling on the roofs of houses and buildings but not much on the ground.   It’s only about 0 or 1 degree but not too unpleasant as there was no wind and the snow is so dry we weren’t getting wet and I was walking around with the camera in it with no problems. 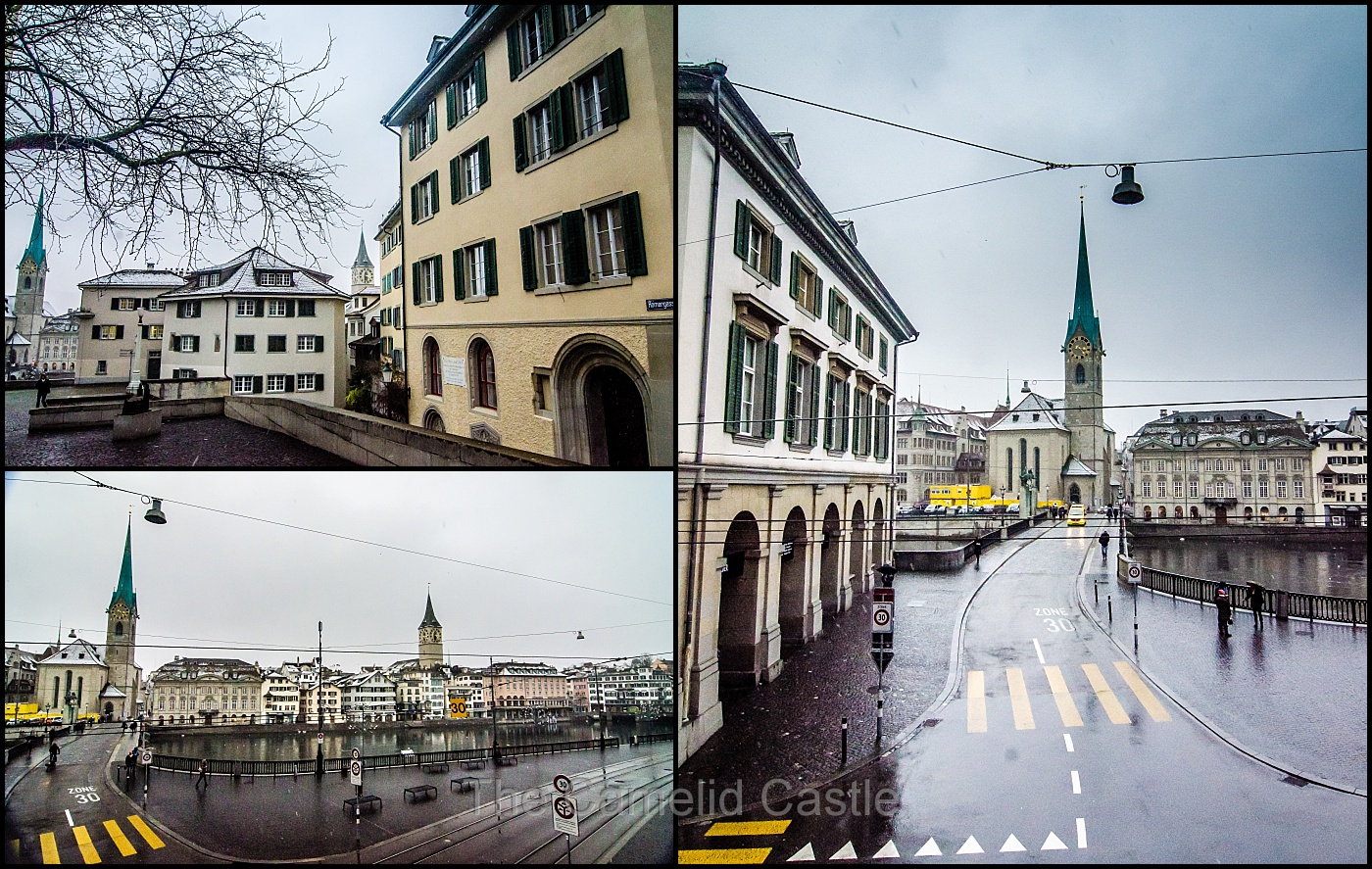 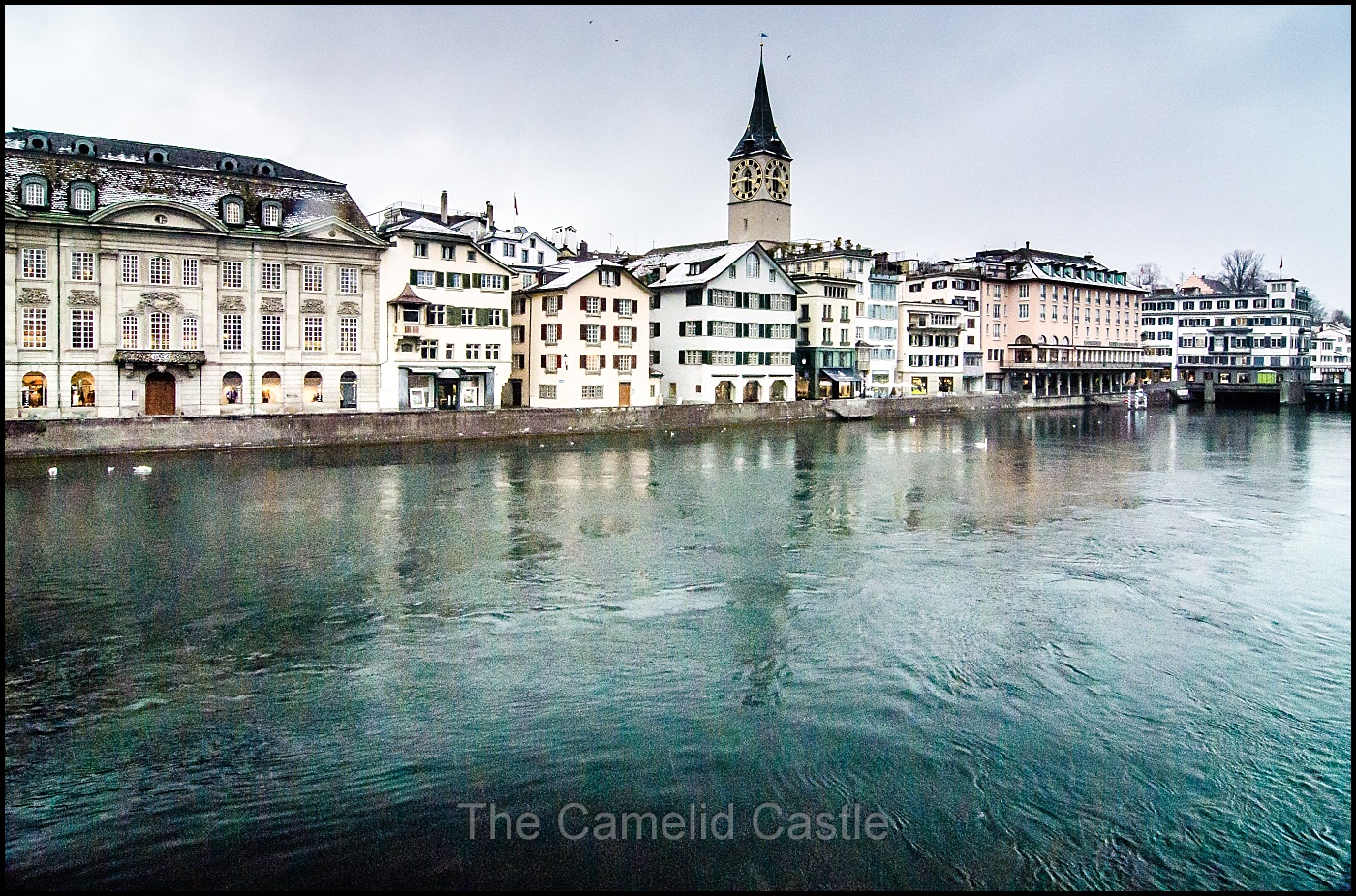 In our wanderings we saw the Grossmunster church and lots of fountains, it seemed like every little park area had one. 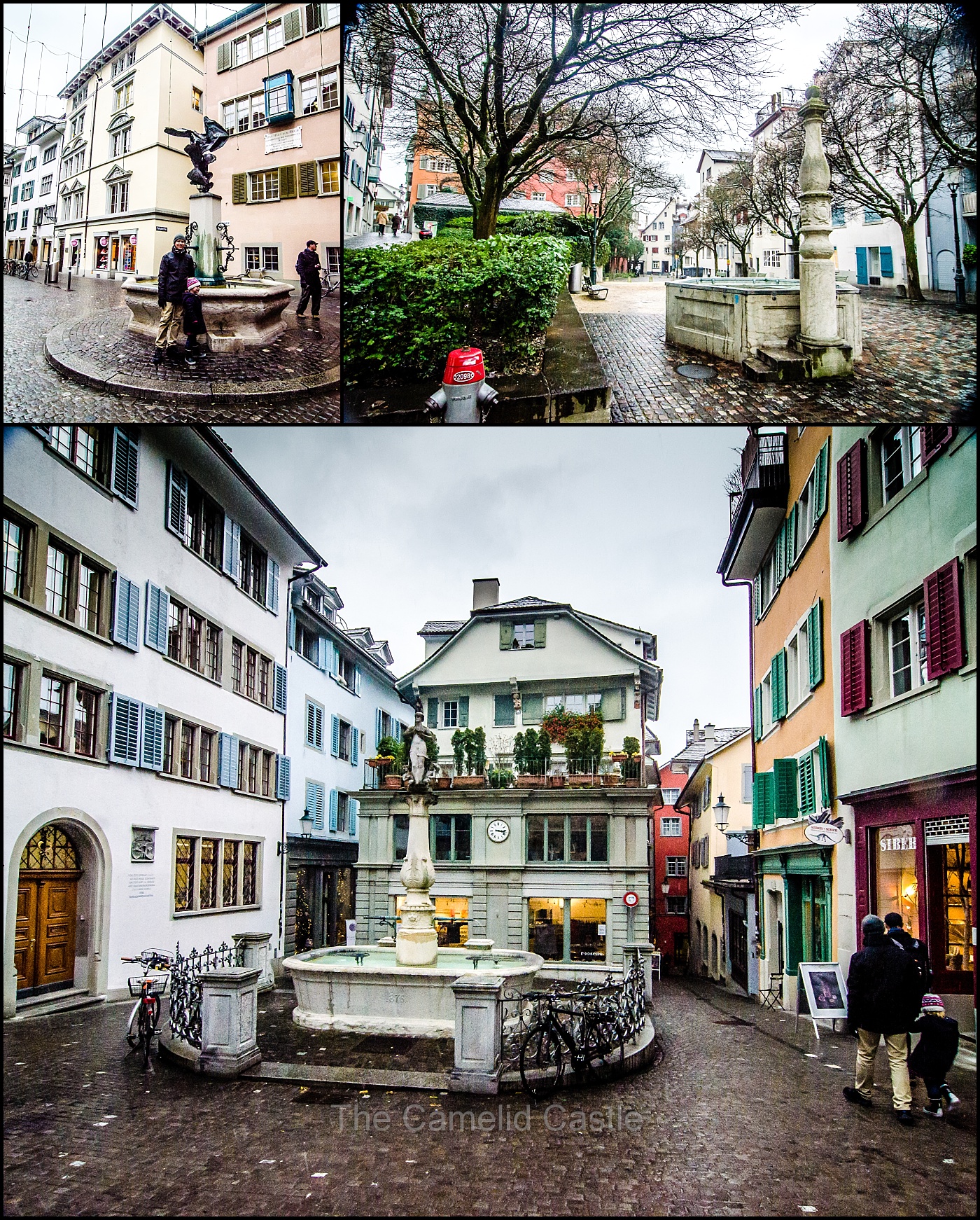 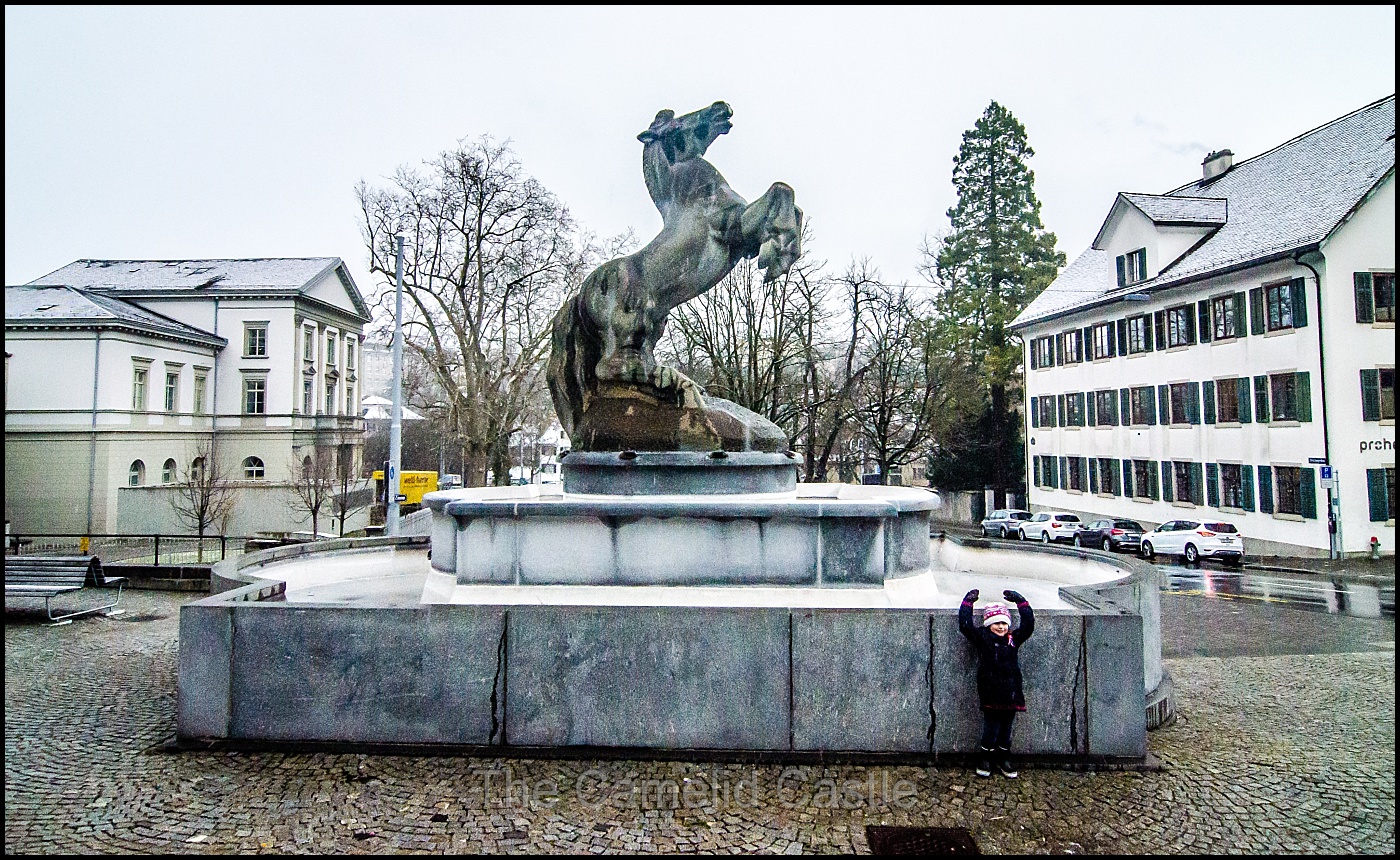 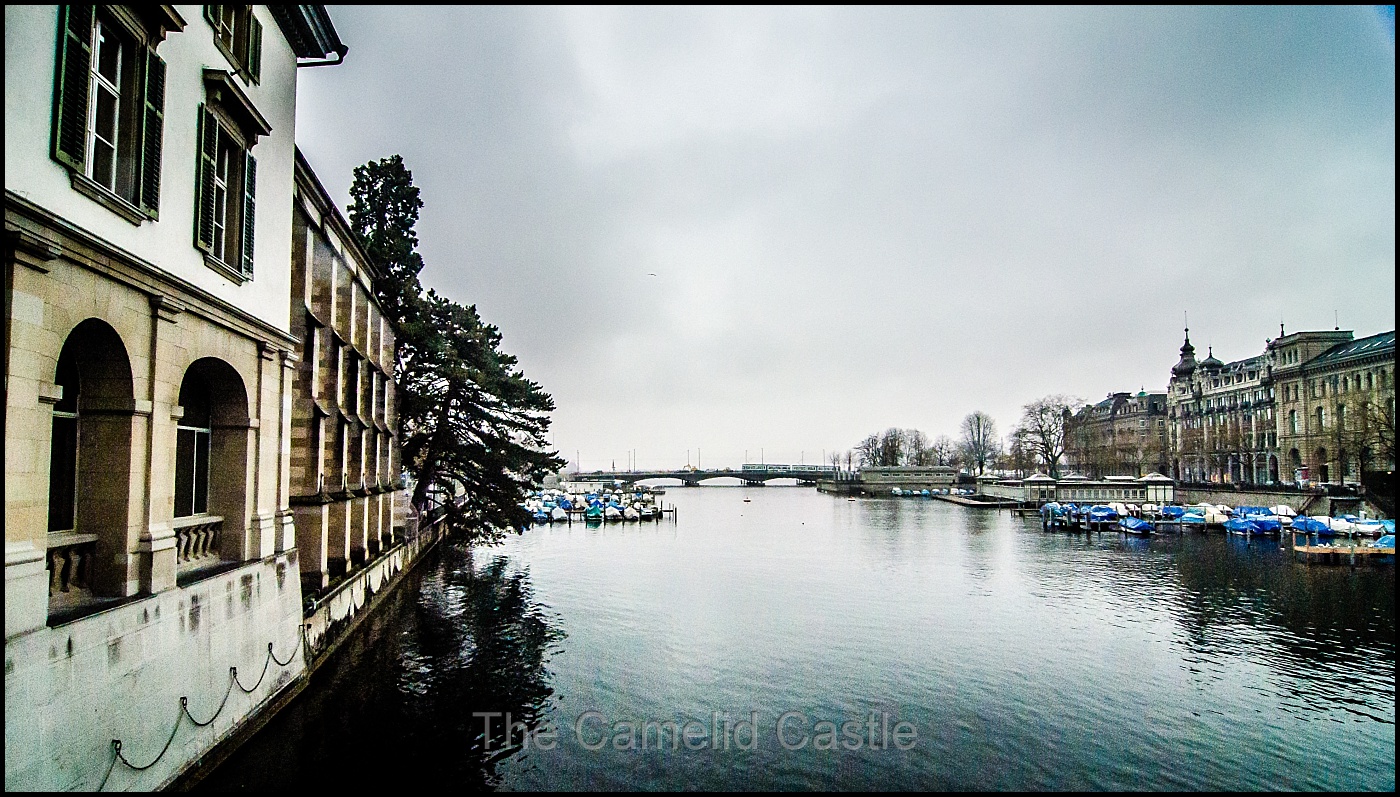 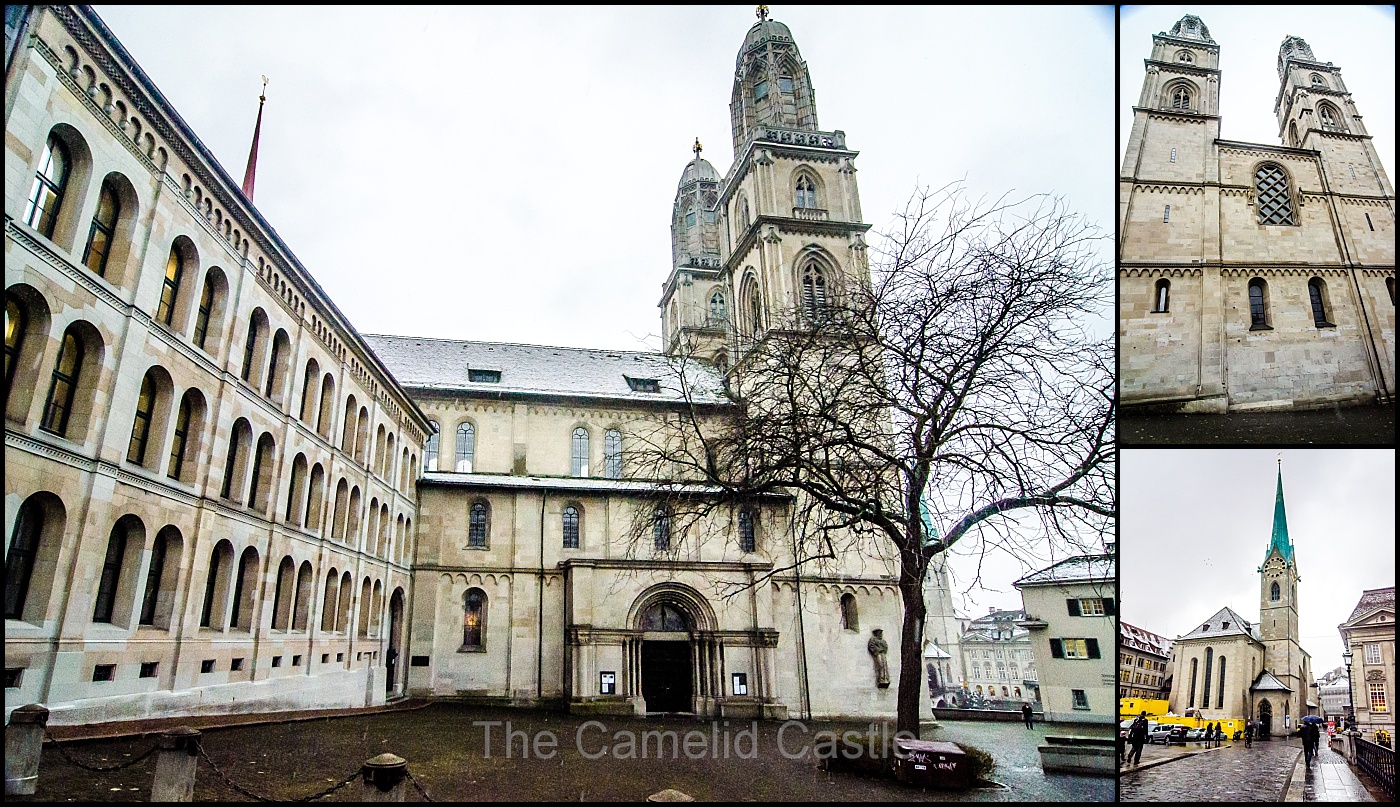 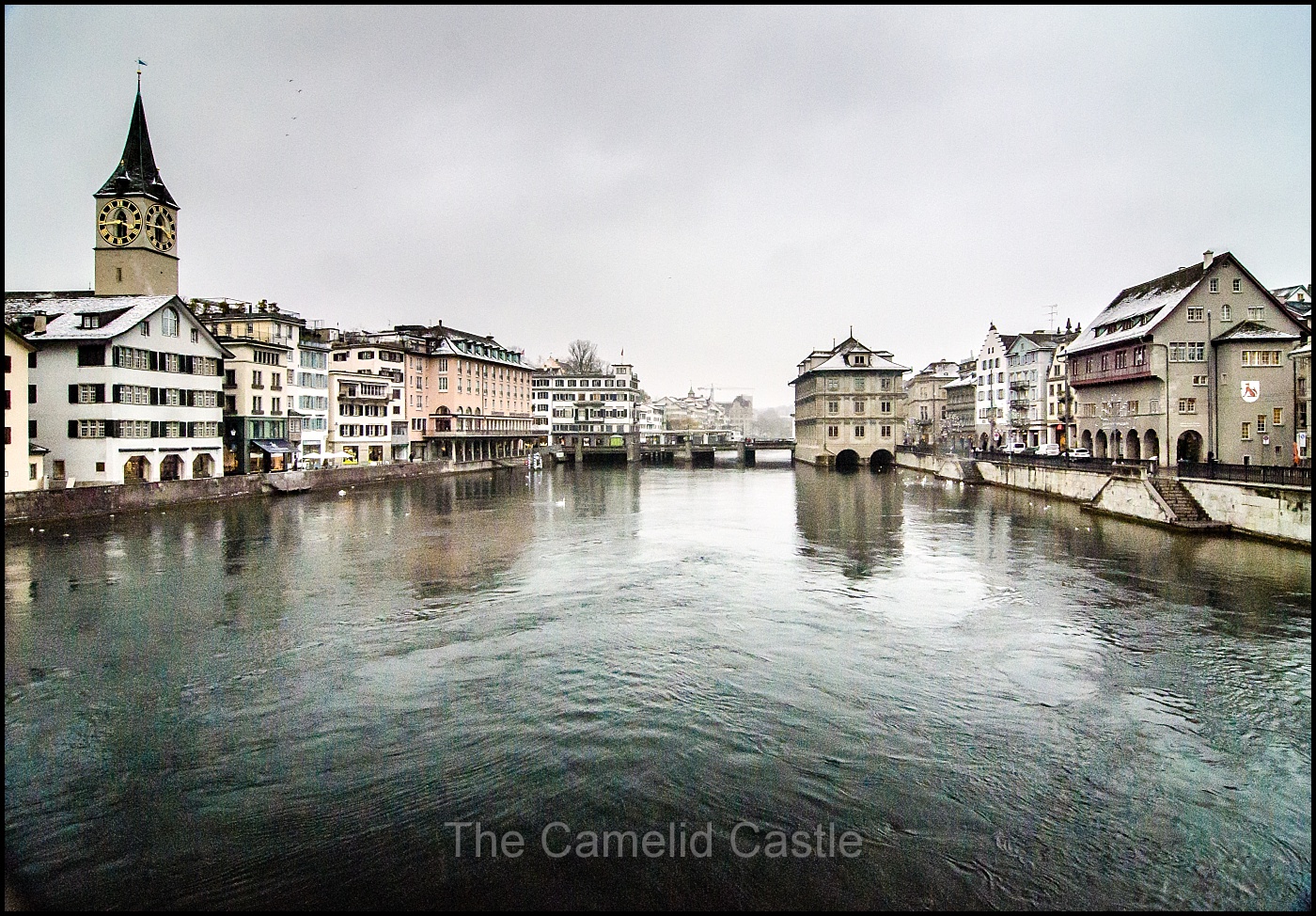 After awhile he headed back over the river and down Bahnhofstrasse to let the kids go to the Franz Carl Weber toy store which we had enjoyed taking Astrid to on our last trip to Zürich.  The toy store is enormous and spread over 3 levels.  Last visit we were particularly impressed with the model trains and even model cable car sets.   The kids had a good wander around and were allowed to pick out one thing for their belated Christmas present. As tempting as it was to get the model cable car, it had to be carried around for us for another 2 weeks, so wasn’t practical. In the end the kids decided to get some marbles for their kugelbahn (which we had purchased from this store on our last trip) and Astrid got an alpaca pillow and Soren a stuffed pterodactyl toy. 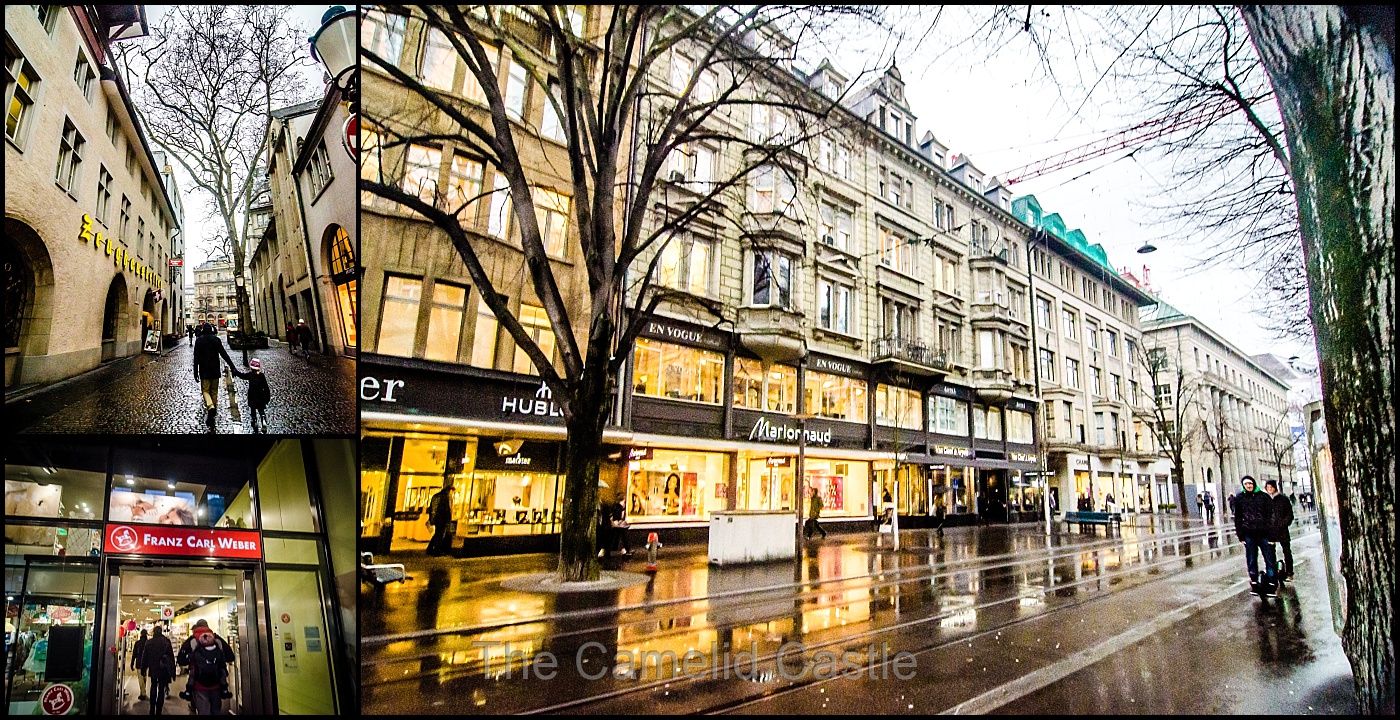 The kids now very happy, we headed off in search of dinner.  The sun was now setting and our tummies were rumbling after an early lunch on the train. It was only just 5pm but food and an early night were in order. We went back across the river into the old town to try to find the pub that Anto, Astrid and I had eaten at 3 years earlier. 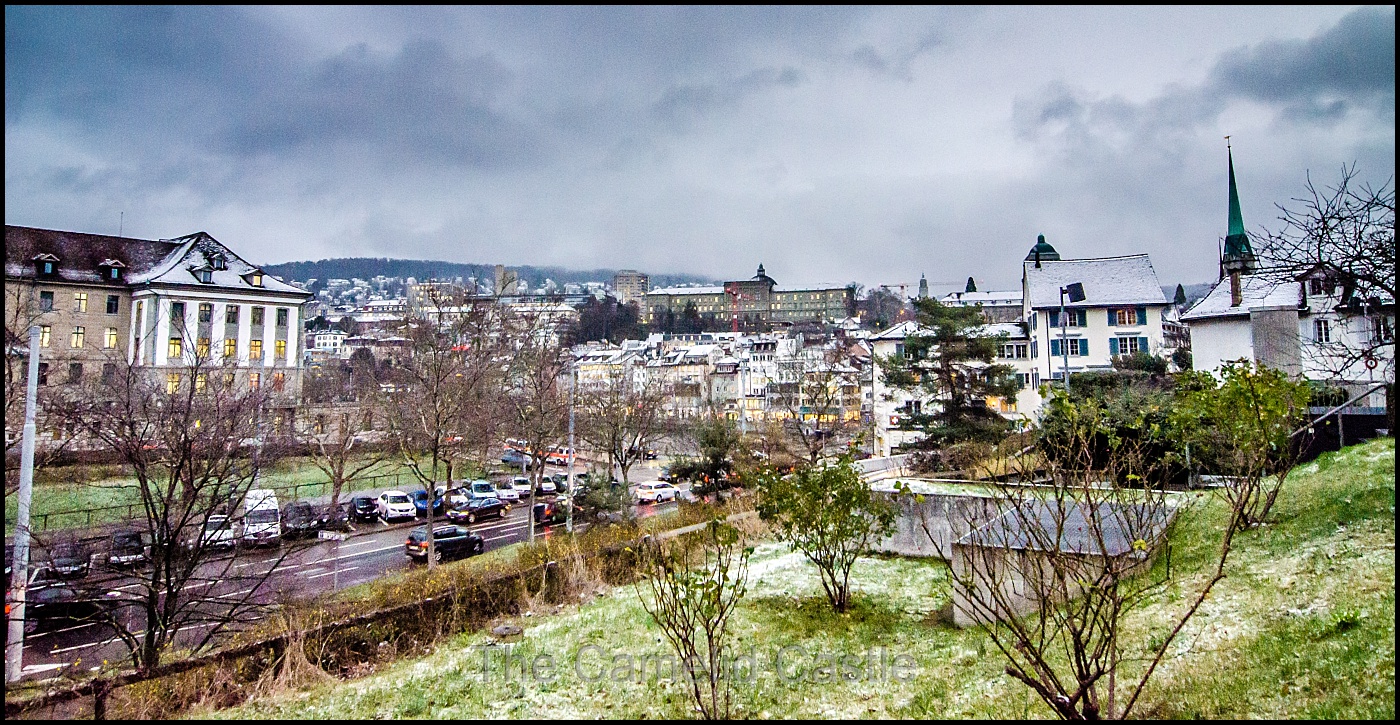 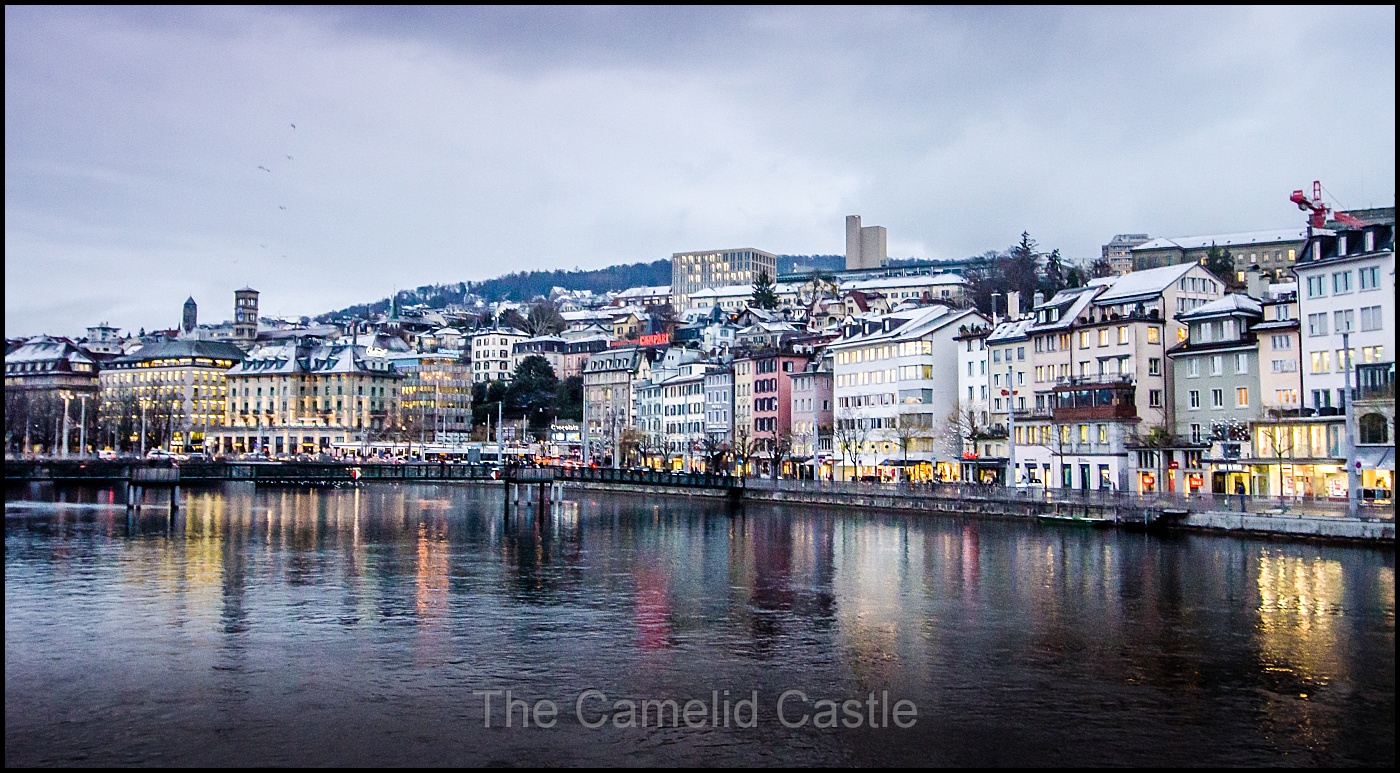 Despite not knowing where the pub was or what it was called, we managed to find it pretty easily.
The boys of course have beers but much to their annoyance they are much smaller and more expensive in Switzerland. I have a glass of wine, along with some raclette with pickled onions, gherkins and potatoes. Might as well get into the Swiss food right away!  Anto has a Winter salad which has bacon, mushrooms, onion, lettuce.  Mikl had sliced deer in a creamy game sauce and Alan has steak with vegies and with chips. We did have an interesting time with the kids dinner, we ordered them sausage with onion rings only to find out it’s salad with raw onion much to their annoyance but they liked the sausage. 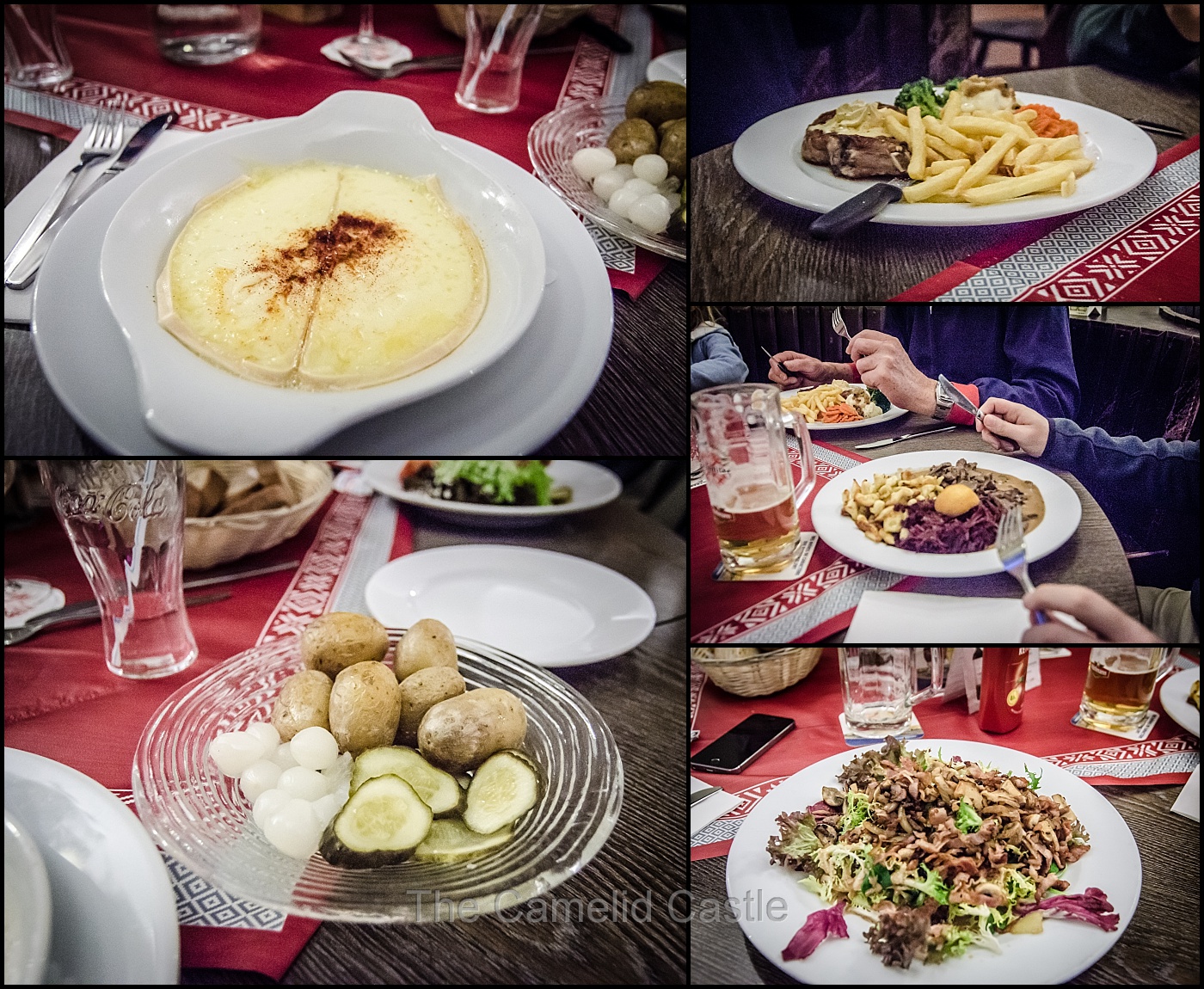 We all polished off our food but were still hungry but not keen to pay Swiss restaurant prices for dessert. So we headed to the supermarket for dessert and supplies on the way back to the hotel.  We picked up a chocolate cake from supermarket (and apples for Soren who was demanding them).  The hotel had no coffee-making facilities so we stopped by a cafe to get desperately needed coffees. They were by far the most expensive coffees since Sweden, but Swiss prices are on par with Swedish (and often worse).  Despite being prepared for this, it was hurting a bit after the relative cheapness of Austria and Germany!

It was only snowing very lightly on our walk back, but we were hopeful of more snow overnight.  We had a hotel picnic of coffee and cake before getting the kids off to bed at a somewhat reasonable hour.

Statistics for Thursday the 14th of January 2016 – the morning temperature in Innsbruck Austria was a brisk minus 9. Zürich, Switzerland had a low of minus 3, a high of 1 degree and a mean of minus 1, with light snow.  The total walking for the day was 12.5km, a pretty good effort considering the entire morning was spent sitting on a train! Astrid again walked the whole day.

2 thoughts on “14 January 2016 – from a glorious snowy Innsbruck to more snow in Zürich, Switzerland”