It was time for the last destination on our trip Paris!  After 4 nights and 3 days in lovely Lyon, we were looking forward to returning to Paris for a few days of exploring, eating and shopping!

On our last day in Lyon, the kids were up by 7.30am. We didn’t have to rush too much this morning, so Anto had gone down to our local patisserie to pick up some pastries for breaky.  We breakfasted on pain aux chocolat, croissants, pastry snails and praline brioche. It’s definitely tough being in France! The kids enjoyed them thoroughly and we finished the pack up of our lovely riverside apartment and were ready half an hour ahead of time so headed outside for an earlier bus.

We had found a way between our apartment and Lyon Part Dieux that was the least annoying for moving bags. It involved a bus from outside the apartment building, and then another bus and then a short walk across to the station.  It was fairly efficient and very minimal walking, so we then arrived at Part Dieux almost an hour early, so stood around waiting for our platform to show up. The station was busy so we didn’t get enough seats for all of us in waiting area, which made for a bit of a boring wait, but the kids were pretty excited about heading to Paris.

Twenty minutes before our train was due the platform flashed up and we headed up to the track.  The train was very busy but we had reserved seats so it wasn’t a huge issue.  This was our last long-distance train of our trip.  After so many, it was a little weird to know that we were headed to our final city, and on the countdown to heading home.

It was a 2 hour direct train through to Paris, and rather efficient.  The kids passed the time watching TV on the tablet and colouring in.  Oh, and of course eating croissants……. you must eat croissants almost constantly while in France! 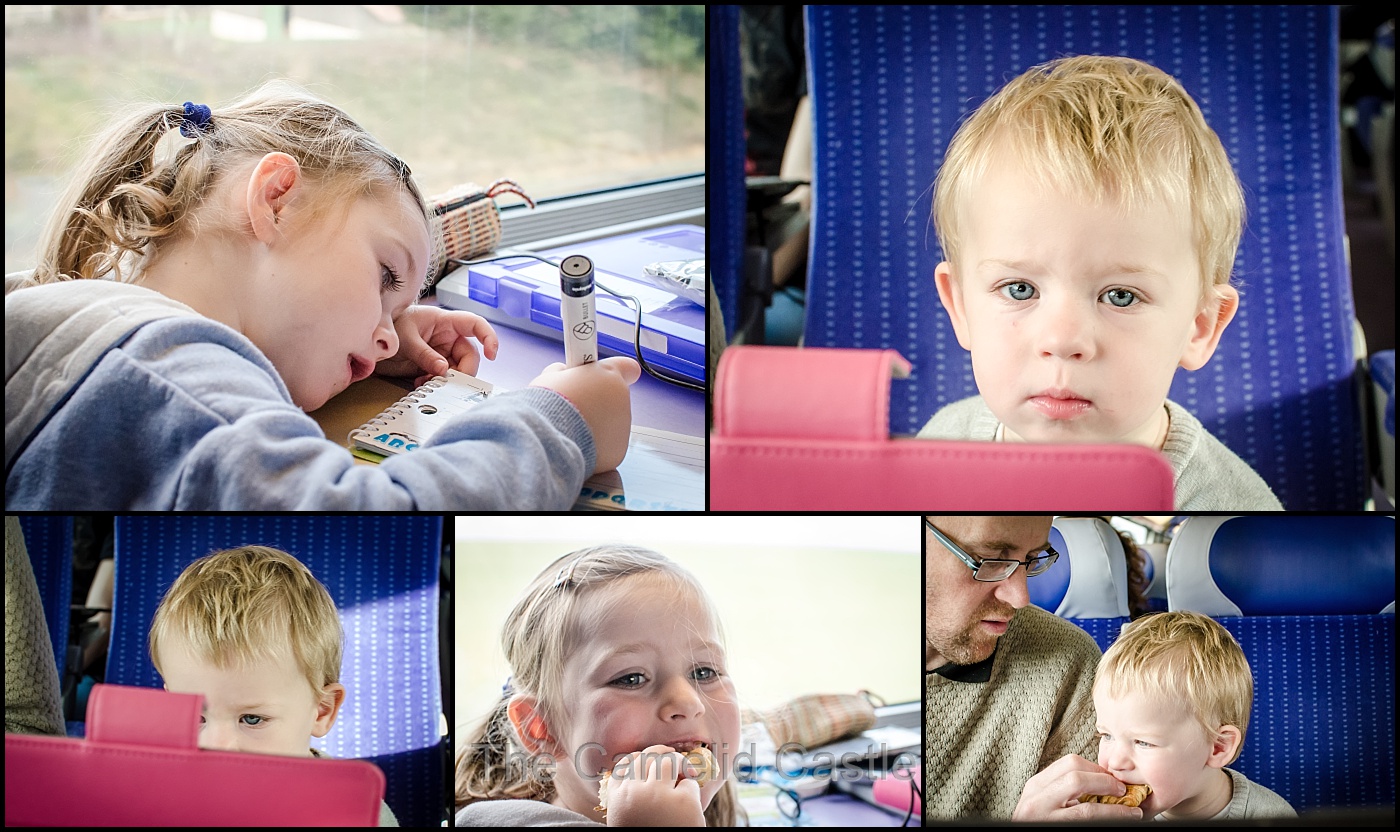 We arrived into Paris, at Gare de Lyon just after 12pm.  We then took the RER to Châtelet and the metro to Réaumur – Sébastopol.  We had a huge advantage in Paris, having spent so much time here previously we pretty much knew how to get around.  We had picked accommodation in the same area as the apartment we stayed in during our 2012 trip and being on the same metro line, when we popped up from the metro station everything looked reassuringly familiar!

After a tiny 120m walk from the station we found our apartment and were pleased to only have 1 flight of stairs to deal with.  The  Airbnb apartment we had booked for our Paris stay, we chose almost entirely based on its location.  It was located on rue St Denis, only 2 streets from where we stayed last time, in an area which is conveniently located and full of great food options!  The apartment turned out to be even bigger than we had anticipated, and very pleasant.

It was now after lunch time so we had a quick drink, dumped our bags and decided to go in search of lunch.  We walked over to our ‘old street’ – rue Montorgueil, one of the most famous market streets in Paris.  Yep, it still looked the same, and being a Saturday was absolutely buzzing.  The street is lined with restaurants, cafés, bakeries, fish stores, cheese shops, wine shops, produce stands and flower shops.  We knew all the good places to hunt and gather so went and picked up some pre-made baguettes and quiches for lunch and thought we’d take a short walk down to our favourite local park at Les Halles. 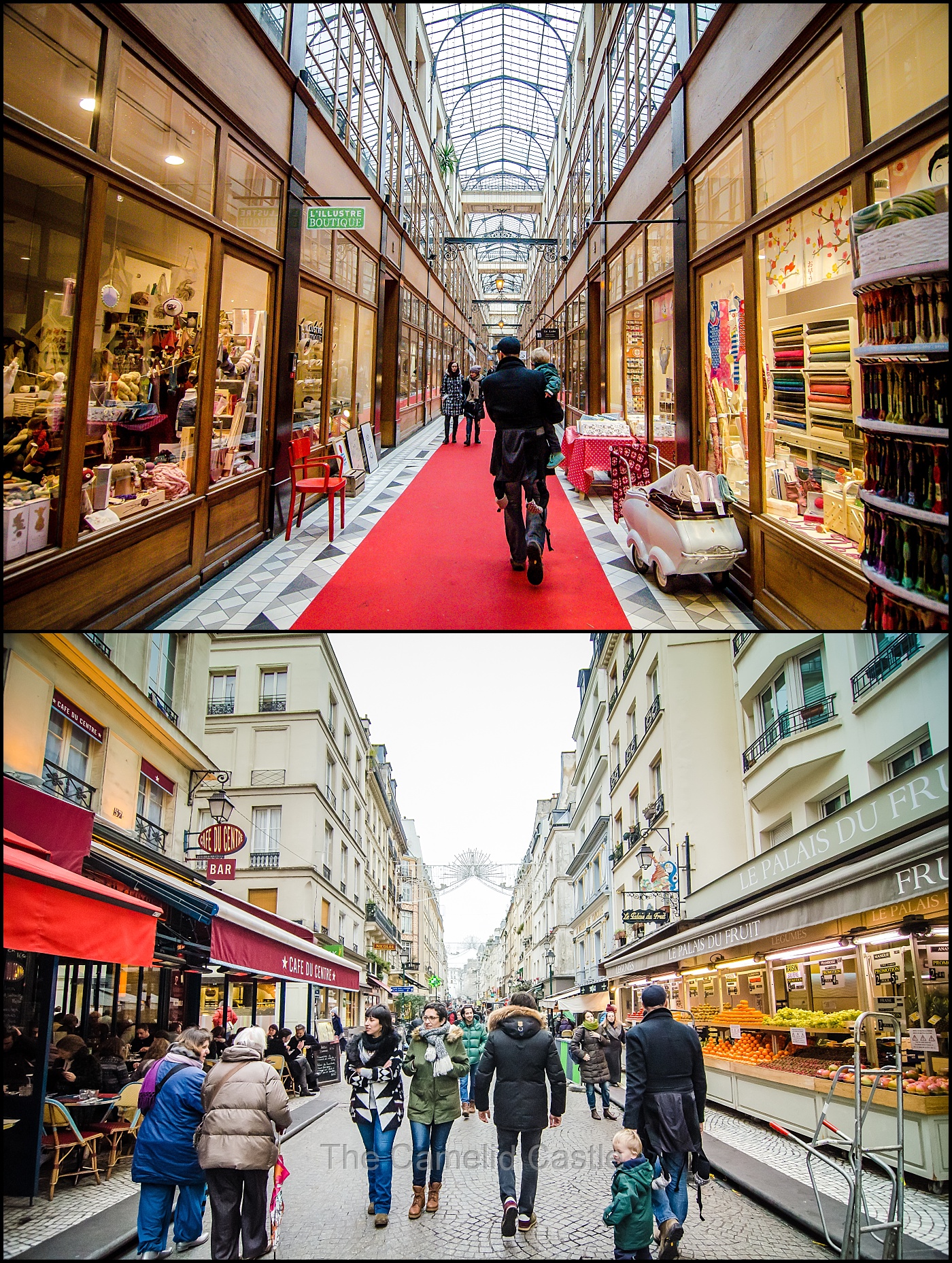 At the southernmost tip of rue Montorgueil is Saint-Eustache Church, and Les Halles, containing the largest indoor (mostly underground) shopping mall in central Paris. There is also a really good fenced park that we spent a lot of time at on our 2012 trip when Astrid was under 18 months old.  We decided to have a picnic lunch in the park, while the kids played.

A big refurbishment of the Les Halles area had been going on during our last trip.  When we arrived at Les Halles it was clear the construction was still going, but some areas had been finished and there was a new path open to the park.  We could also visit the giant head statue that was sitting in a fenced area of construction last time we were here! The park was as we left it, and the kids went crazy for the train and the slippery dip. 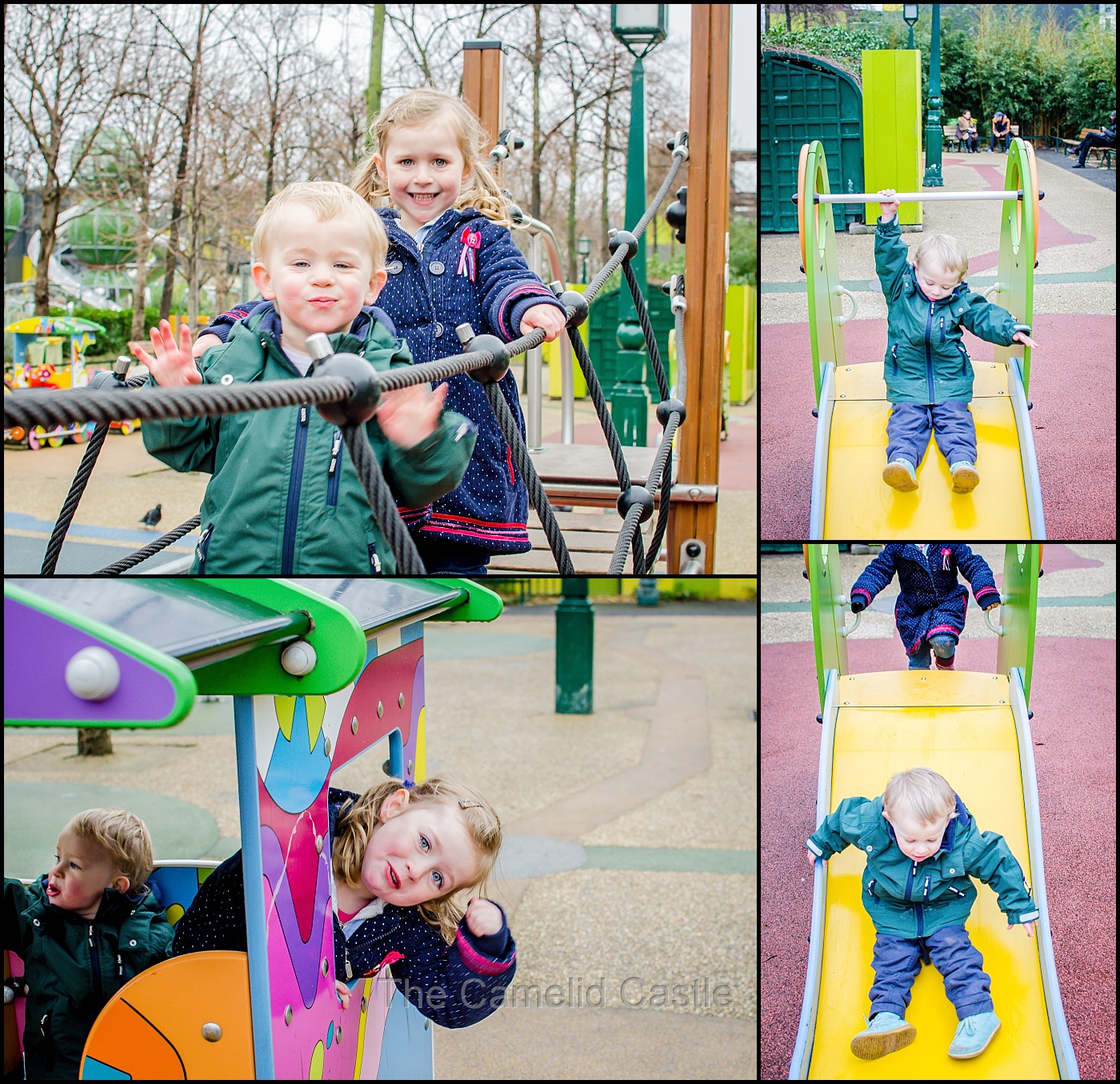 Astrid had adored this park on our last trip, and it was rather fun watching her discover it all over again, this time with her little brother in tow!  They were so busy playing that it was hard to get them to eat.  Both kids kept doing run-bys for mouthfuls of baguette before returning to the play equipment!

With a belly full of baguette we thought we should really do a little exploring before it got dark.  The kids were not convinced about leaving their now-beloved park but we promised another visit during our Paris stay, and the probability of more yummy food and adventures for the afternoon.

With the exception of Soren, all of us had been to Paris before. This meant that we didn’t really have an itinerary for our 3.5 days here. The plan was to eat, wander, and eat some more!  Maybe with a little shopping thrown in, as we only had to move the bags one last time……. to the airport!

We didn’t have a clear plan for the afternoon. originally we thought we’d head in the direction of Jardin du Luxembourg as we planned to visit the park again during our Paris stay.  We headed off in that general direction and quickly found ourselves down at Pont Neuf. Pont Neuf is the oldest standing bridge across the Seine. It is also where the ‘love locks’ craze seemed to have started.  In 2012 the Pont Neuf bridge was the place to put your lock. They have now been cut down several times over, and locks are now adorning the nearby statues instead.  We have noticed all through Europe that people will now throw a padlock on any old bridge, it’s not confined to the famous bridges in Paris, any more. 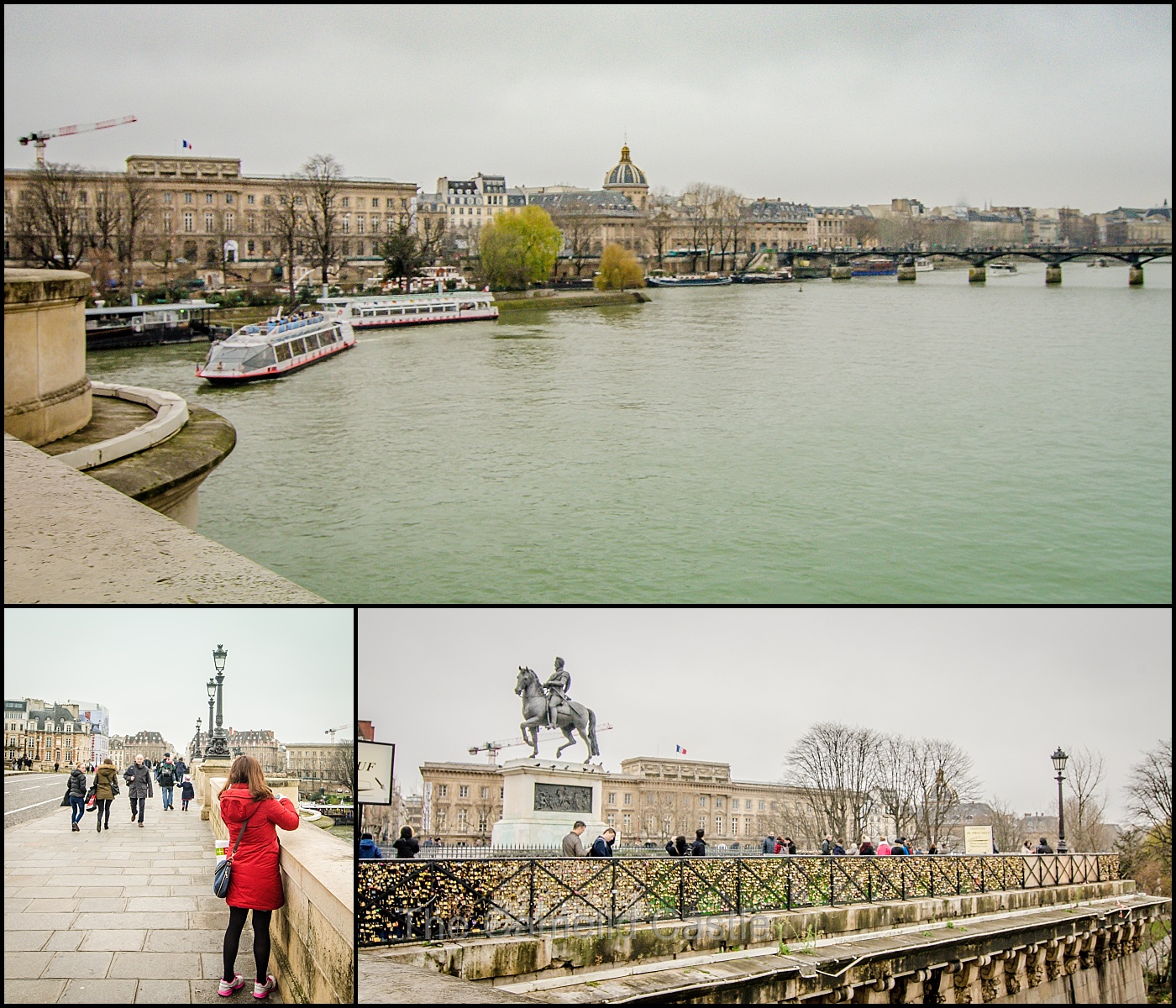 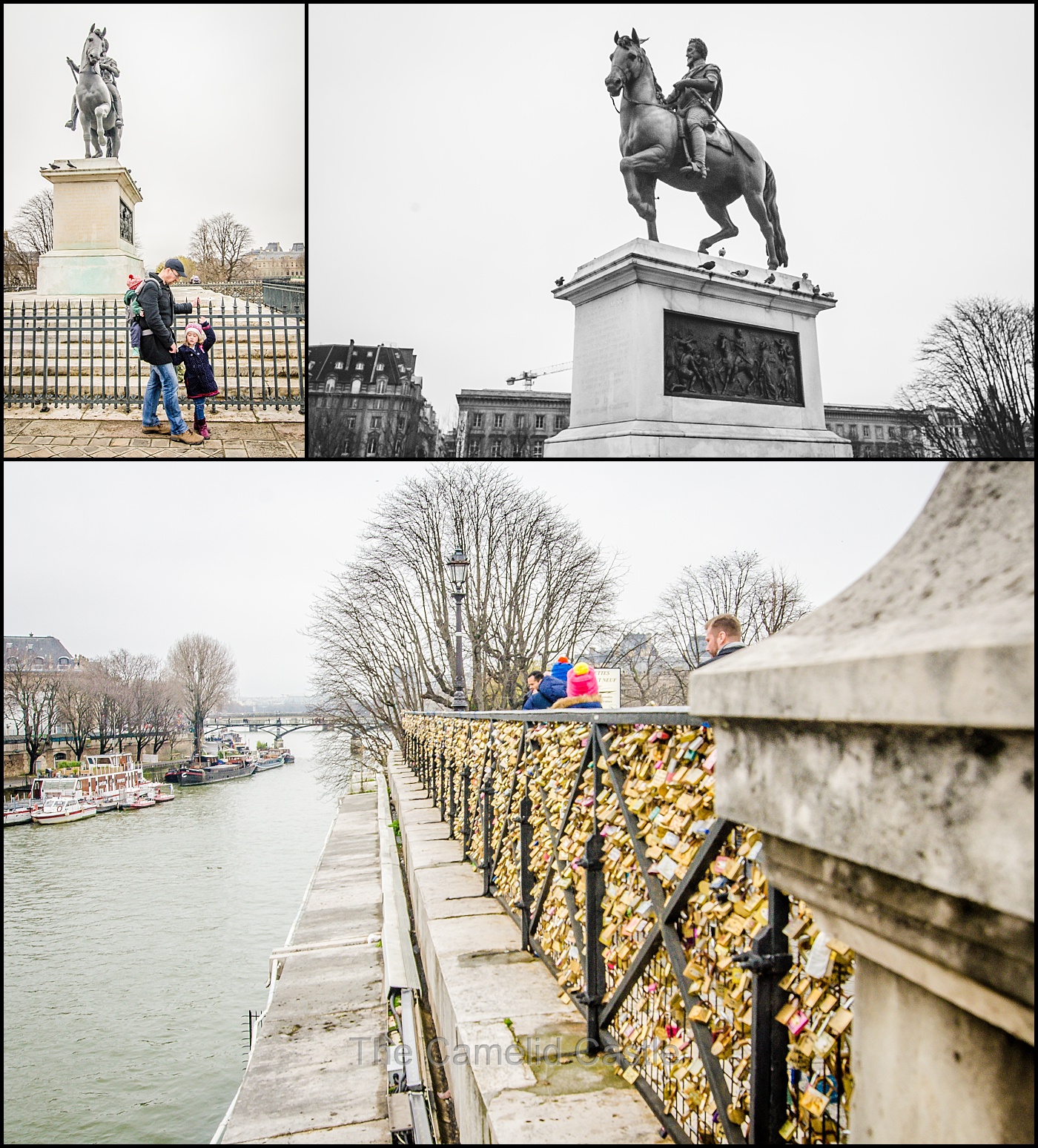 From Pont Neuf, we continued our wander along the Seine, and being a Saturday, there were a heap of street vendors lining the river. It was a very cool and windy afternoon, but the streets of Paris were packed. We wandered along checking out the street stalls and all the yummy goodies in nearby shops. 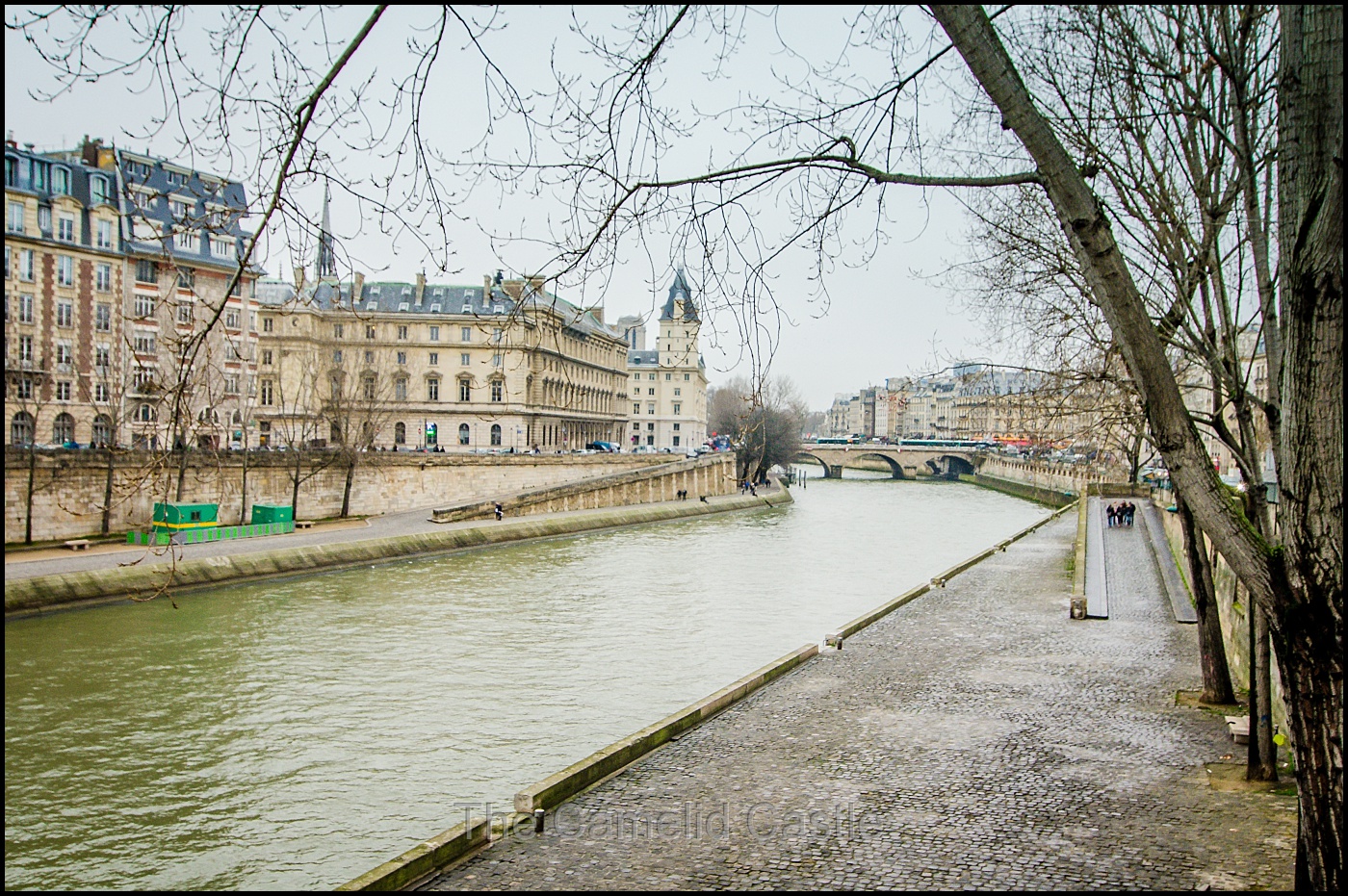 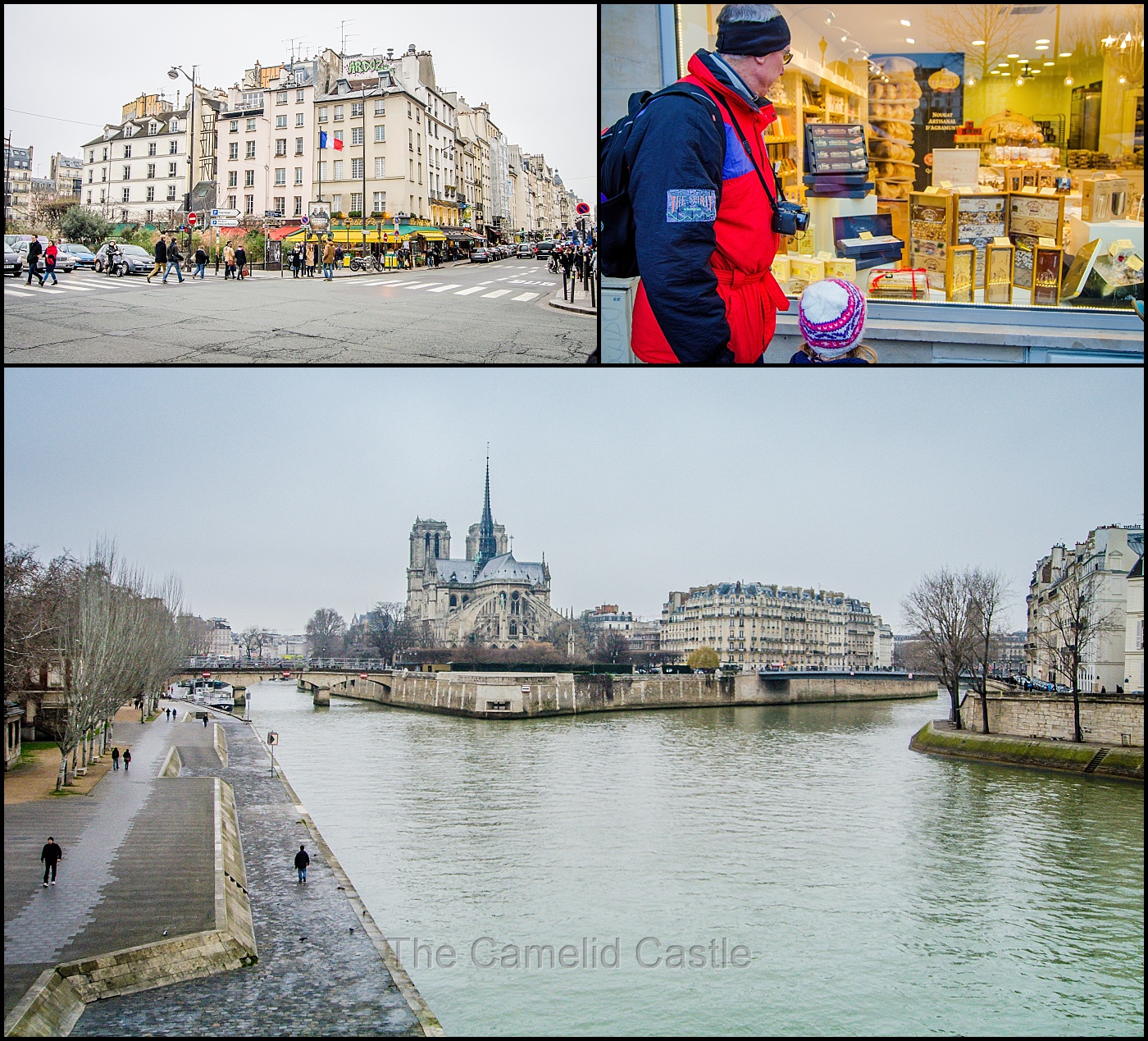 I thought we could do with some afternoon tea, and we weren’t that far from Berthillon, the very famous glacier that we became quite a fan of last Paris trip……. so when in Paris, why not go and have a little Berthillon ice cream for afternoon tea?  Once we arrived at the main Berthillon store in Ile Saint-Louis, it was pretty clear that Saturday afternoon was probably not the best time to visit, since there was quite a wait for a table.  Since we had promised ice cream to the kids, we popped into their takeaway shop, next door, and got ourselves cups of salted caramel and pistache ice cream to share.  It was still just as tasty as we remembered, and the 2 cups did not last long between the 5 of us! 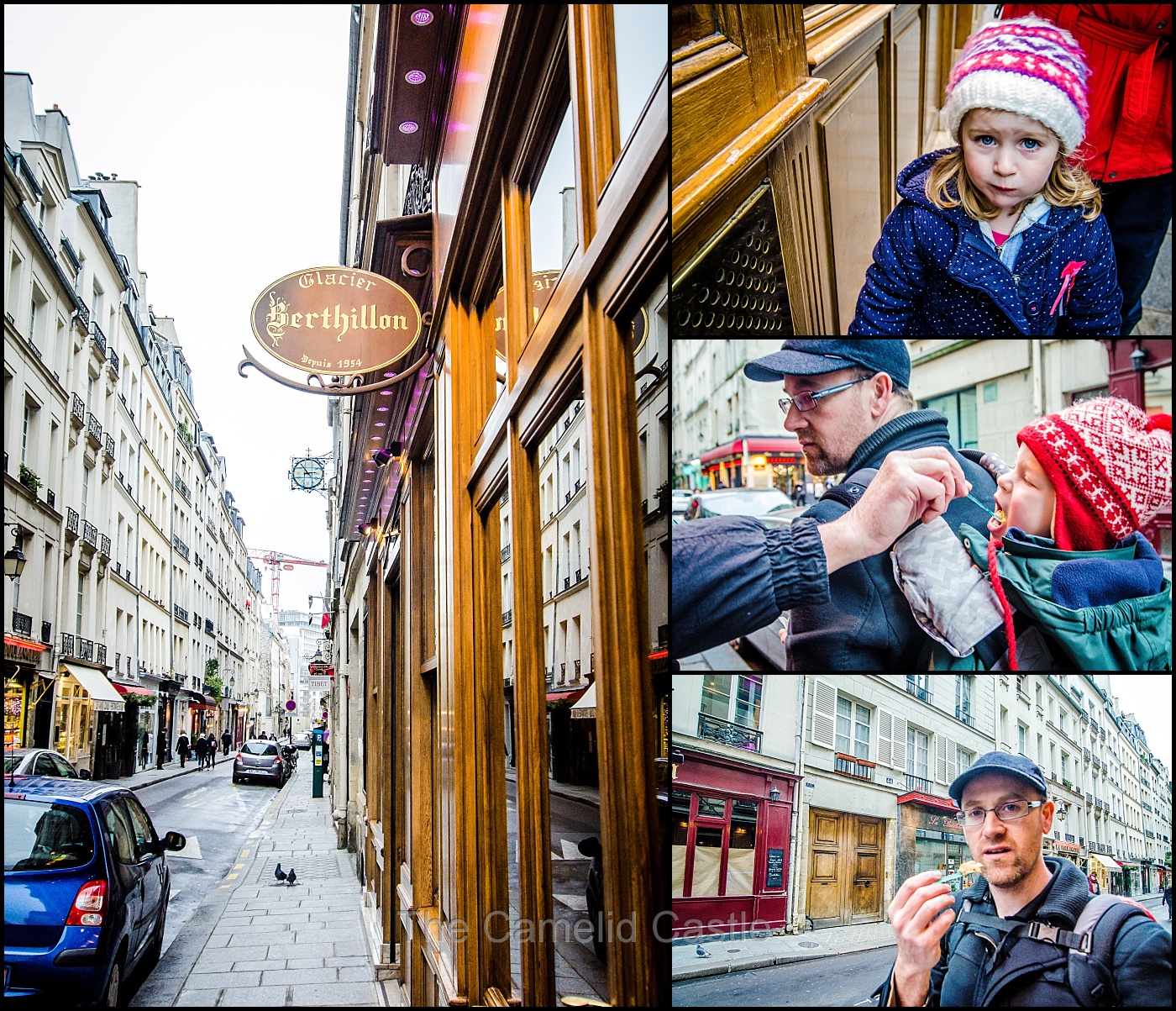 As we had now wandered a long way from where we originally intended we decided to have a little wander past Notre Dame and then head back towards rue Montorgueil to find some dinner.  As we walked towards Notre Dame, we happened to come across a piano playing street performer, set up in the middle of the bridge. He was very good, and certainly added to the atmosphere of our Saturday afternoon wandering the Paris streets! 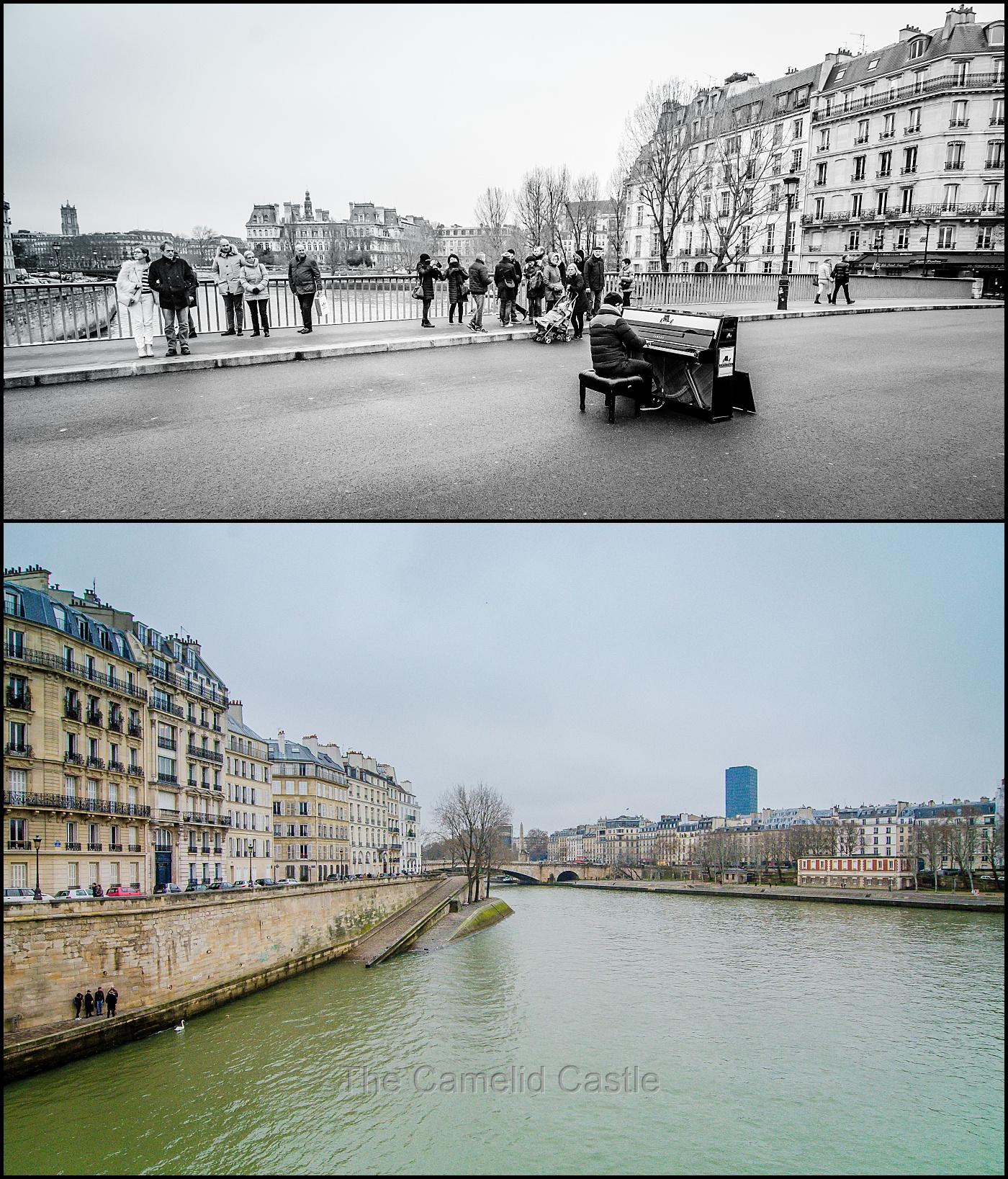 Just before we hit Notre Dame, we stumbled across a little park we had never visited, so a quick play was in order.  I did have to stop Astrid from going upside down too many times, just after eating ice cream. It wasn’t likely to end well, despite her protests that she was having fun! 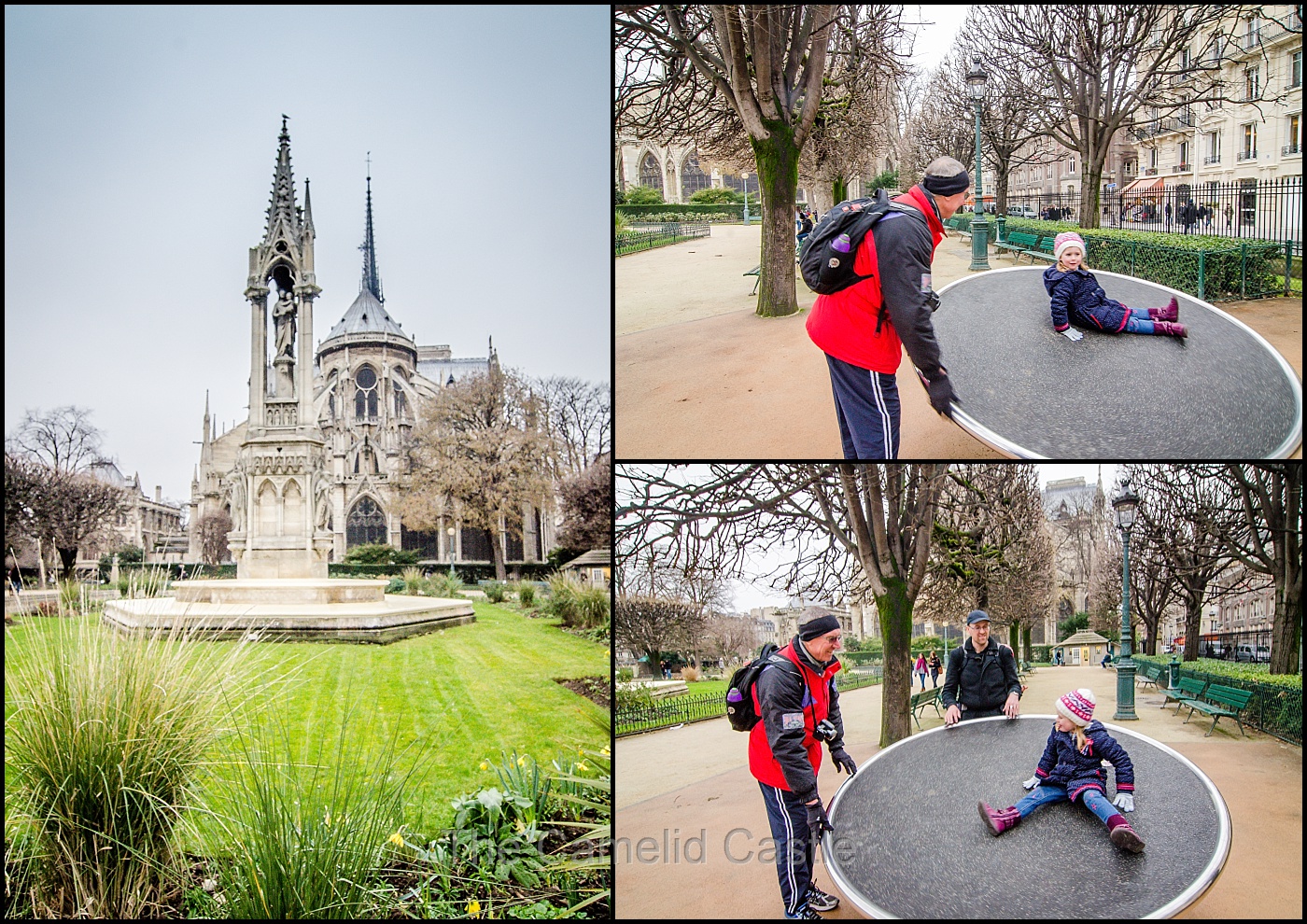 Then it was off to Notre Dame.  We had all visited Notre Dame before.  A good thing, since the lines to go in were out the door, around the corner and down a block.  We were more than happy to just have a walk around and a few pictures out the front.

It was then a pleasant stroll back across the Seine and towards Hôtel de Ville.  This is one of my favourite areas of Paris.  I love the Hôtel de Ville building, such a pretty building and there is always something happening around it.  Today there was the usual bubble performers, which seem to always be there, and the kids love. There were also some dancers we watched for a little bit and then the kids spied the carousel.  It had been at least 2 days since their carousel ride in Avignon, but it was getting late in the day, and the lines were long, so we promised to come back on a quieter day. 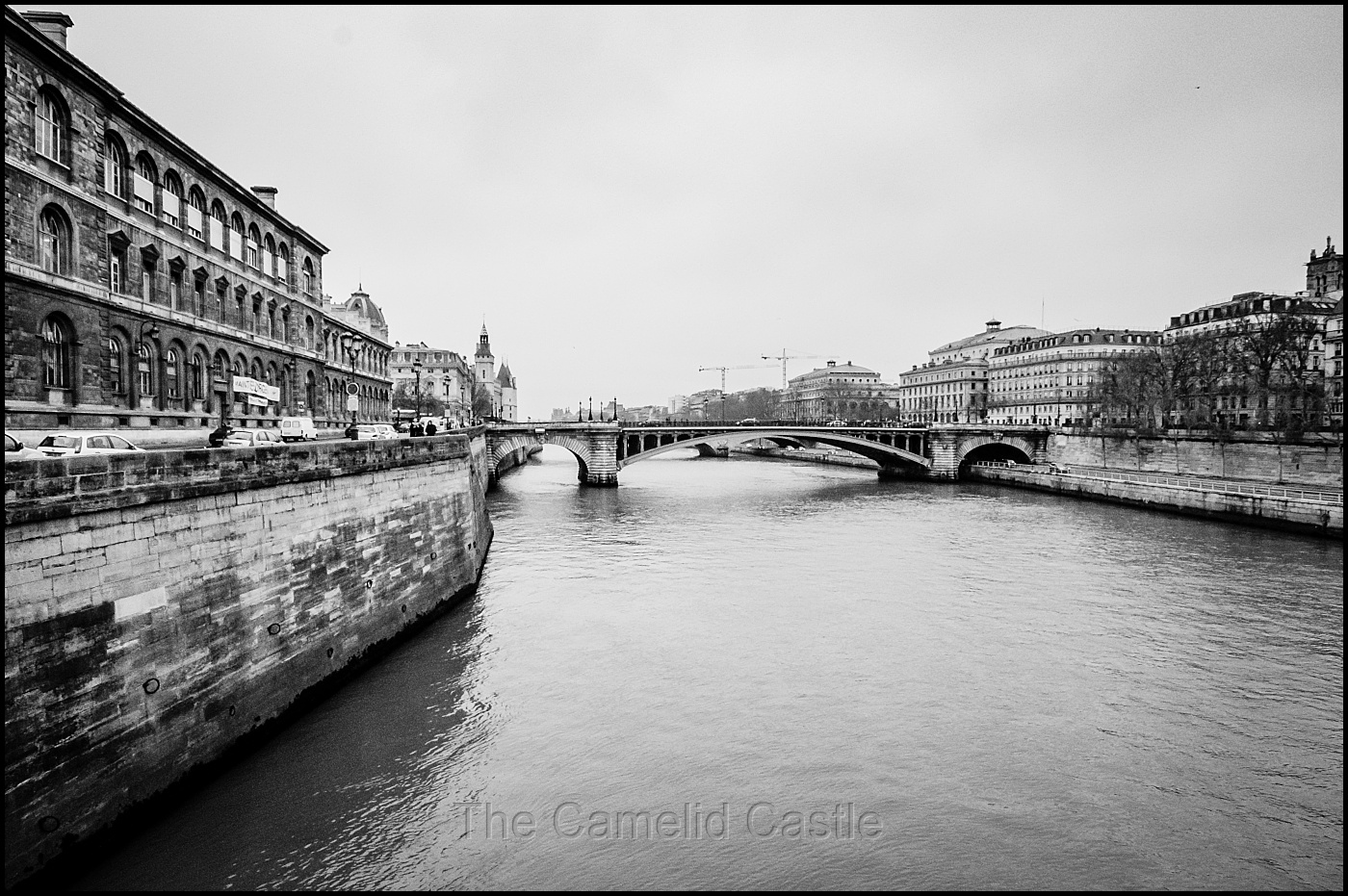 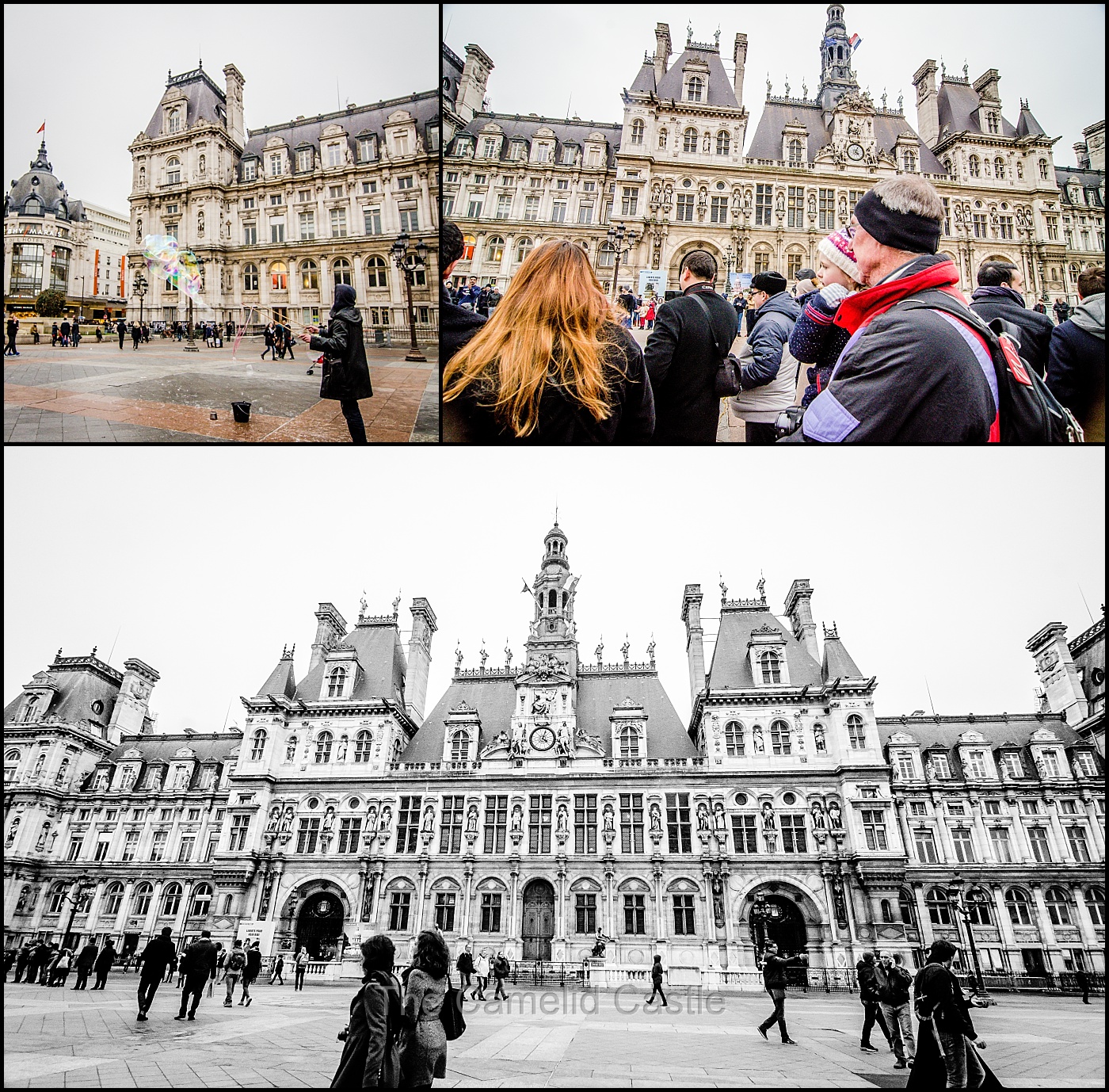 Our walk back towards dinner took us past Centre Pompidou. Again, we had visited Centre Pompidou on last trip so weren’t intending on going in.  The lines here were also enormous, snaking across the entire courtyard.  We just wanted to show the kids the very cool building, and visit the fountains that are opposite.  Annoyingly the fountains weren’t running, but they were still fun to look at. 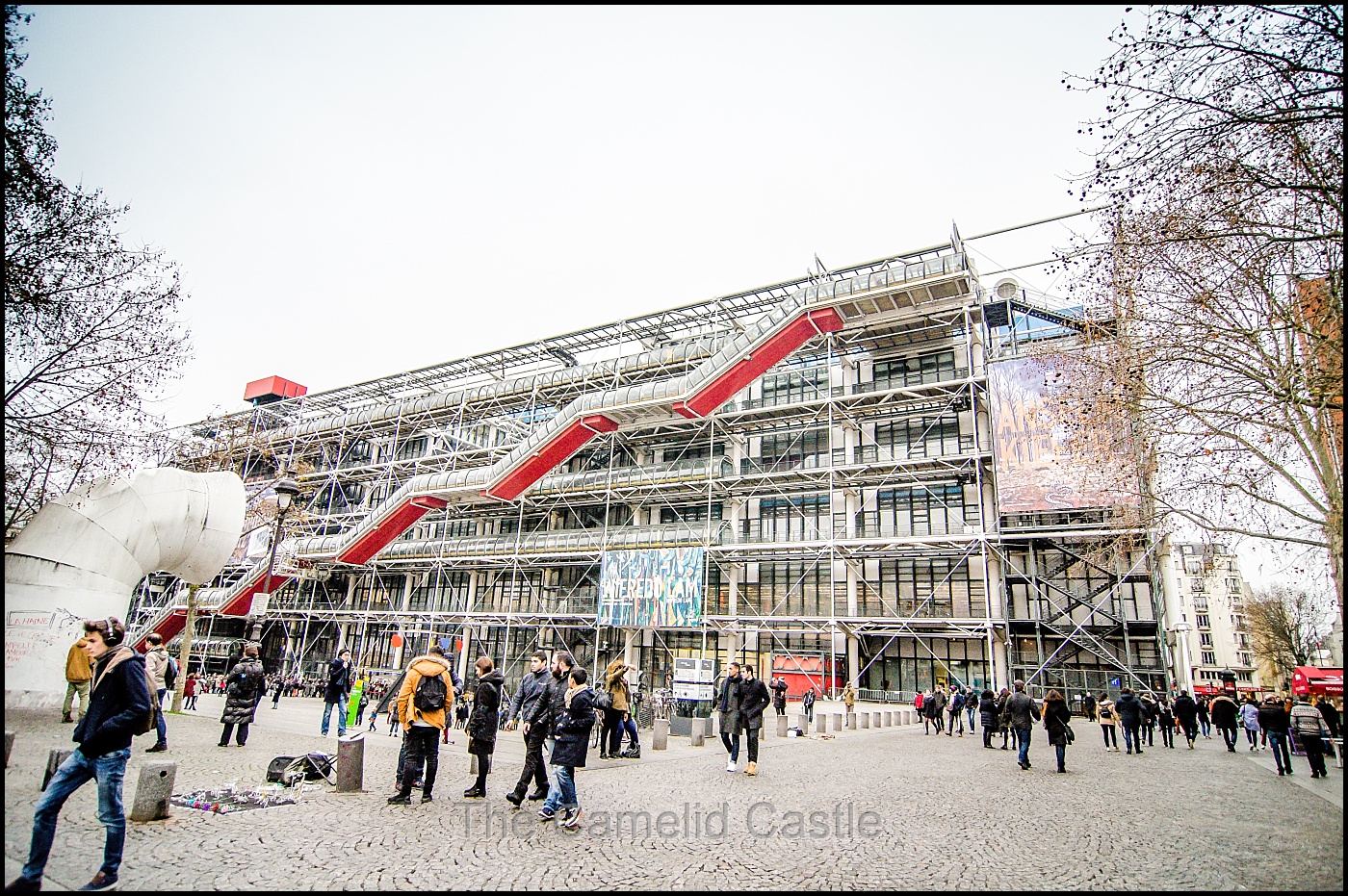 It was then a short walk back to rue Montorgueil. We perused all our favourite patisseries and chocolate shops, trying to figure out how much we could eat in the next 3 days!

We had quite a few favourite restaurants and cafes in the street. We were keen to go back to a particular one for dinner, but despite it being only 5pm we couldn’t get a table for quite a while.  We opted instead to go to a restaurant we’d had breakfast and coffee and cake at previously.  All the locals were just finishing up their lunches as we were rocking in for an early dinner!

All a bit hungry after a big afternoon of walking, we were looking forward to some food.  I had a croque vegetarian. Anto had the steak tartare, and Alan had chicken with mushroom sauce and pasta.  We ordered the kids a chicken and pasta dish that they inhaled.  The adults all enjoyed a well-earned wine along with our dinner. 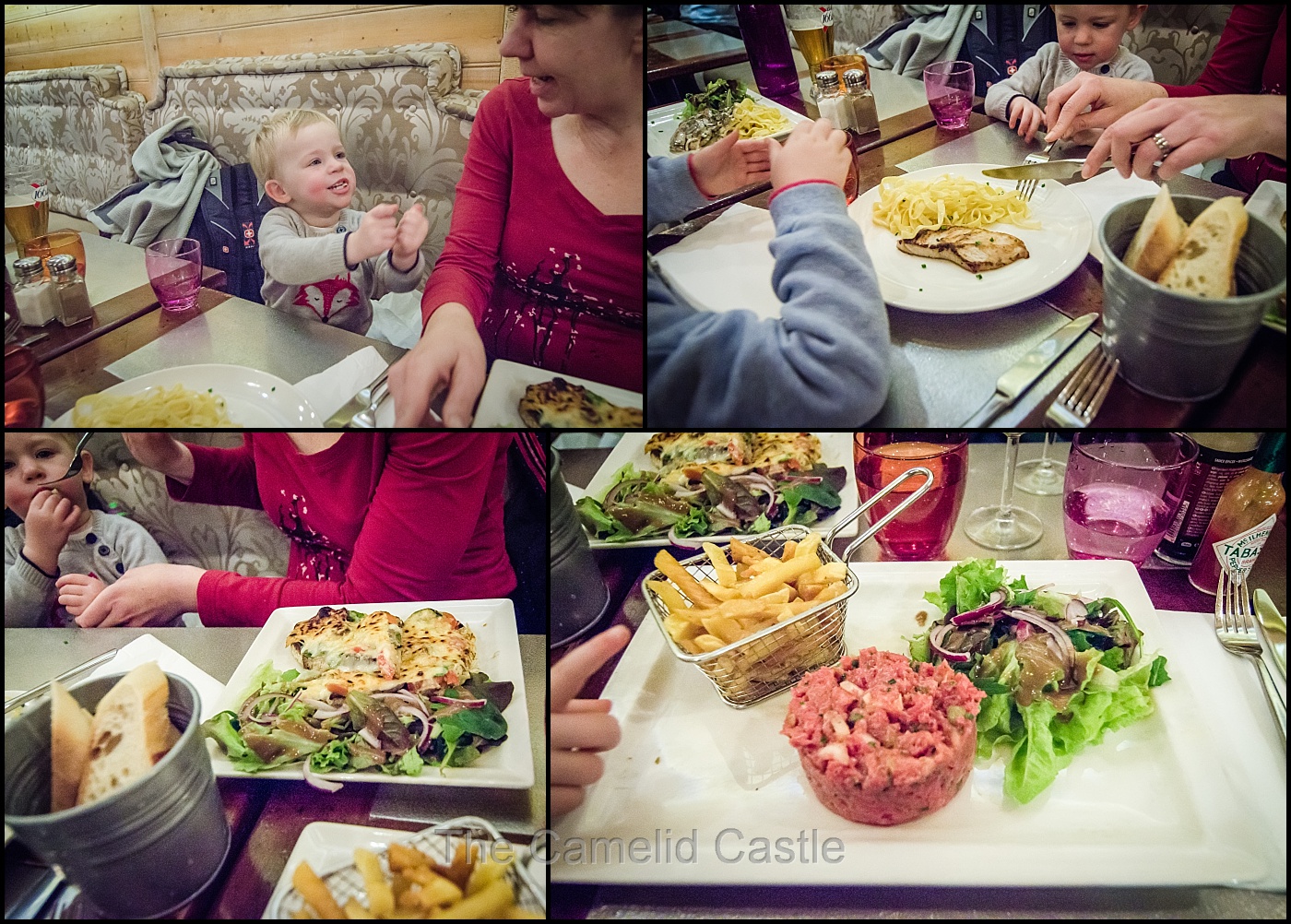 As we did most nights on our last Paris trip, we stopped past a patisserie on the way back to the apartment for some take home dessert.  With only 3 nights in Paris, we were going to have to fit a lot of patisserie into a short time!  The treats for the night were a tart framboise and an opera blanc. Both were enjoyed with coffee after the kids were in bed.

Statistics for Saturday the 23rd of January, 2016 – the morning in Lyon started out at a not too unpleasant 2 degrees.  Our afternoon in Paris, ranged from 5 degrees to 7 degrees, with a lot of wind. A typical Winter’s day in Paris really.  Our total walking for the day was a touch under 15 km. A good effort considering we spent most of the morning sitting on our butts!  Astrid did well again, her little legs were happy to keep walking when Parisian treats were on offer.