The Paris apartment we were staying in was extremely well-located but the downside was it was a very loud area and the previous night being Saturday there was extra noise. The street has a lot of cafes, restaurants and night clubs. We had this problem last time we were in Paris, but it only really was an issue of Friday and Saturday nights.  At any rate, the kids somehow slept through it all!  We all slept in until varying times between 7 and 8am and breakfasted on some chocolaty and fruity cereal before getting ready to head out for a day of sight-seeing on foot.

We had a loose plan of heading down past the Louvre and then through Jardin des Tuileries, the Champs-Élysées and to the Arc de Triomphe. We had been to all of these tourist hot-spots before,  but it is a lovely loop to walk. We set out a bit after 9am and it was a pleasant 5 degrees and had obviously rained overnight.  The streets were the typically deserted like they always tended to be on a Sunday morning. 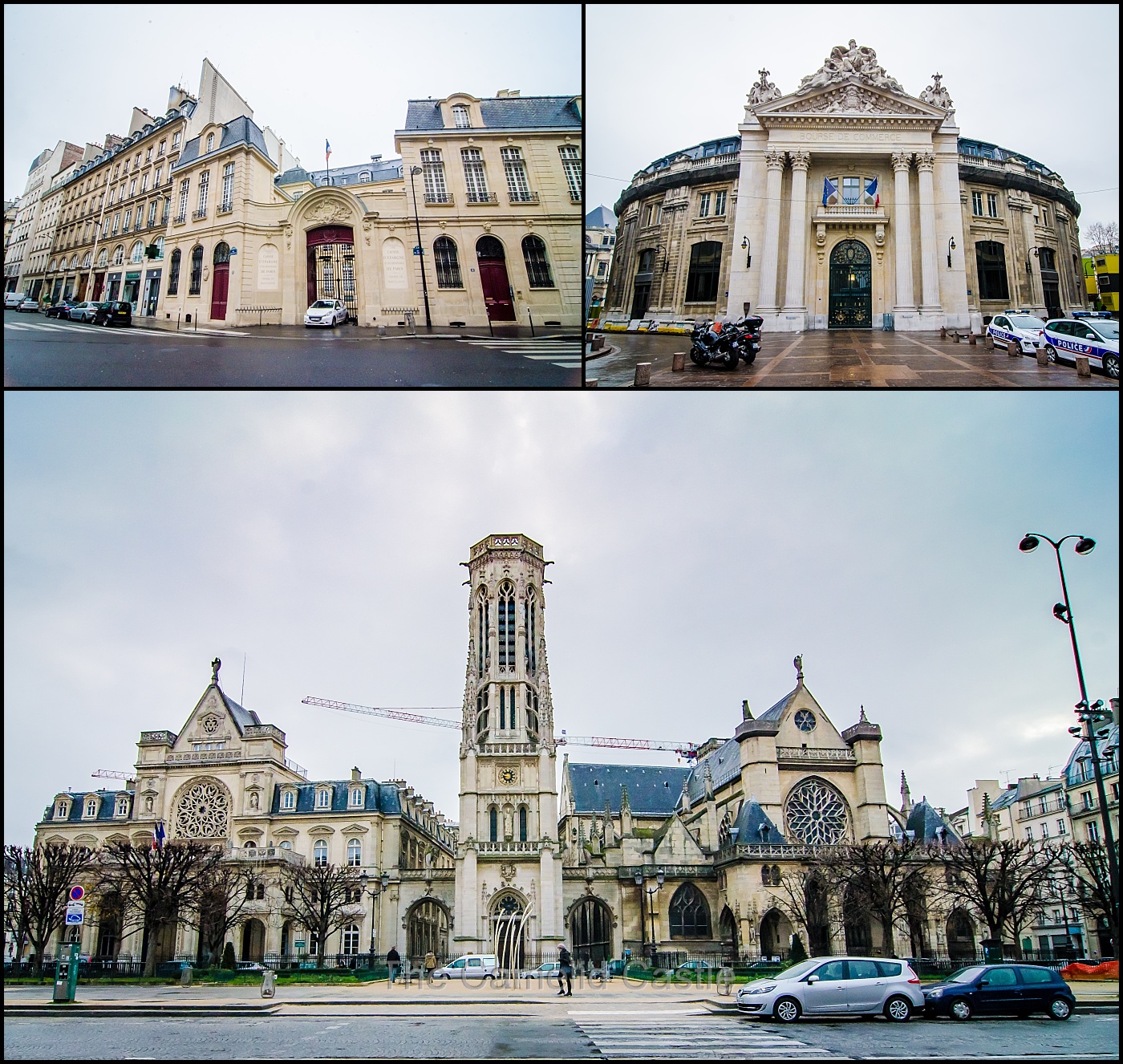 As we set out from our street all the shops were closed, bar a few bakeries, which all had delicious smells wafting out of them.  We decided to abandon the cereal idea the next day and just go back to the pastry plan!

As we approached the Louvre we decided to take the pretty route and walk along the Seine. Anyone who has ever been to the Louvre knows that just circumnavigating the building takes quite a bit of walking.  The banks of the river were filled with Sunday morning walkers and joggers, every time we had been near the Louvre we’d seen people running around and through the grounds, as it was also a popular jogging spot! 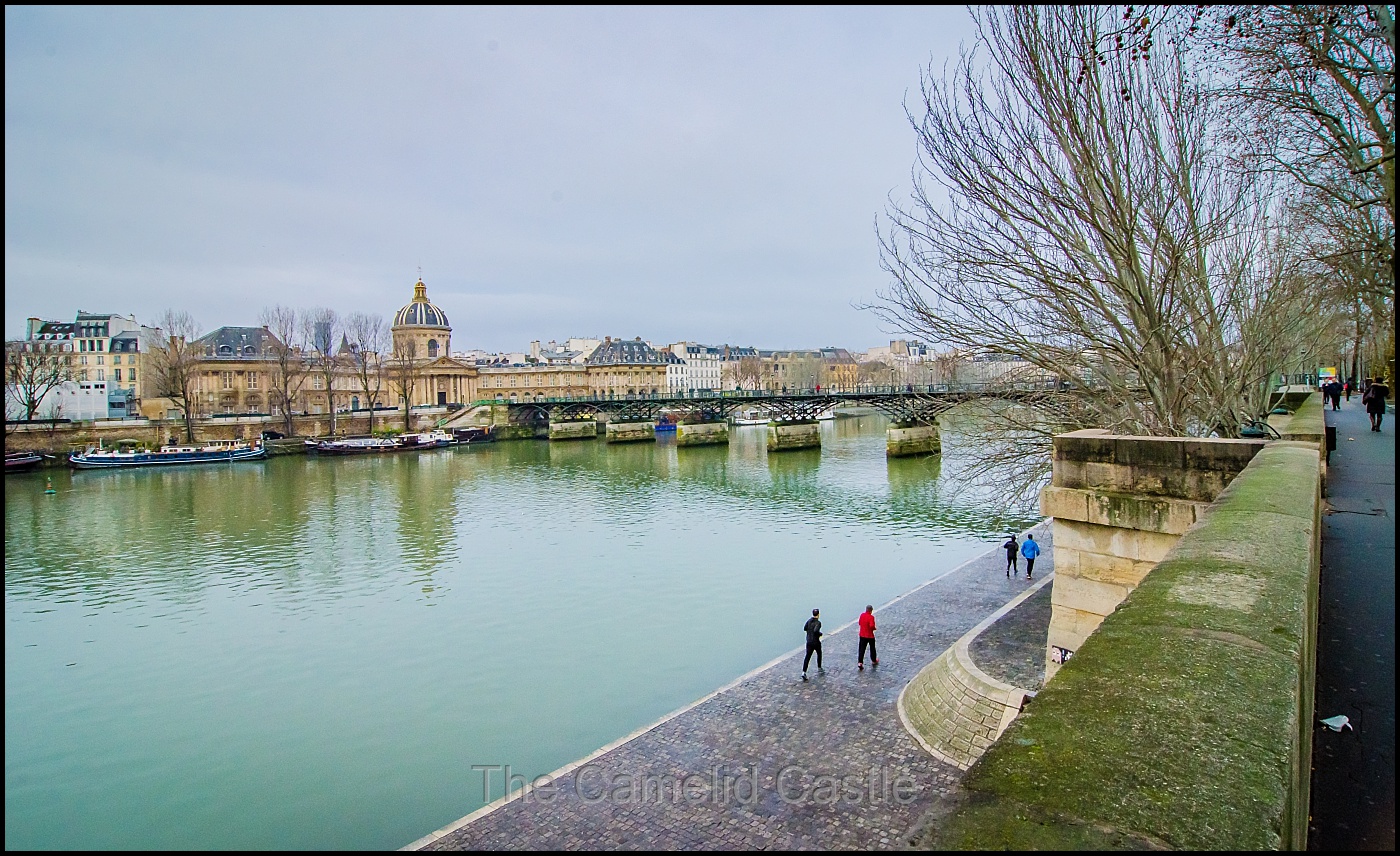 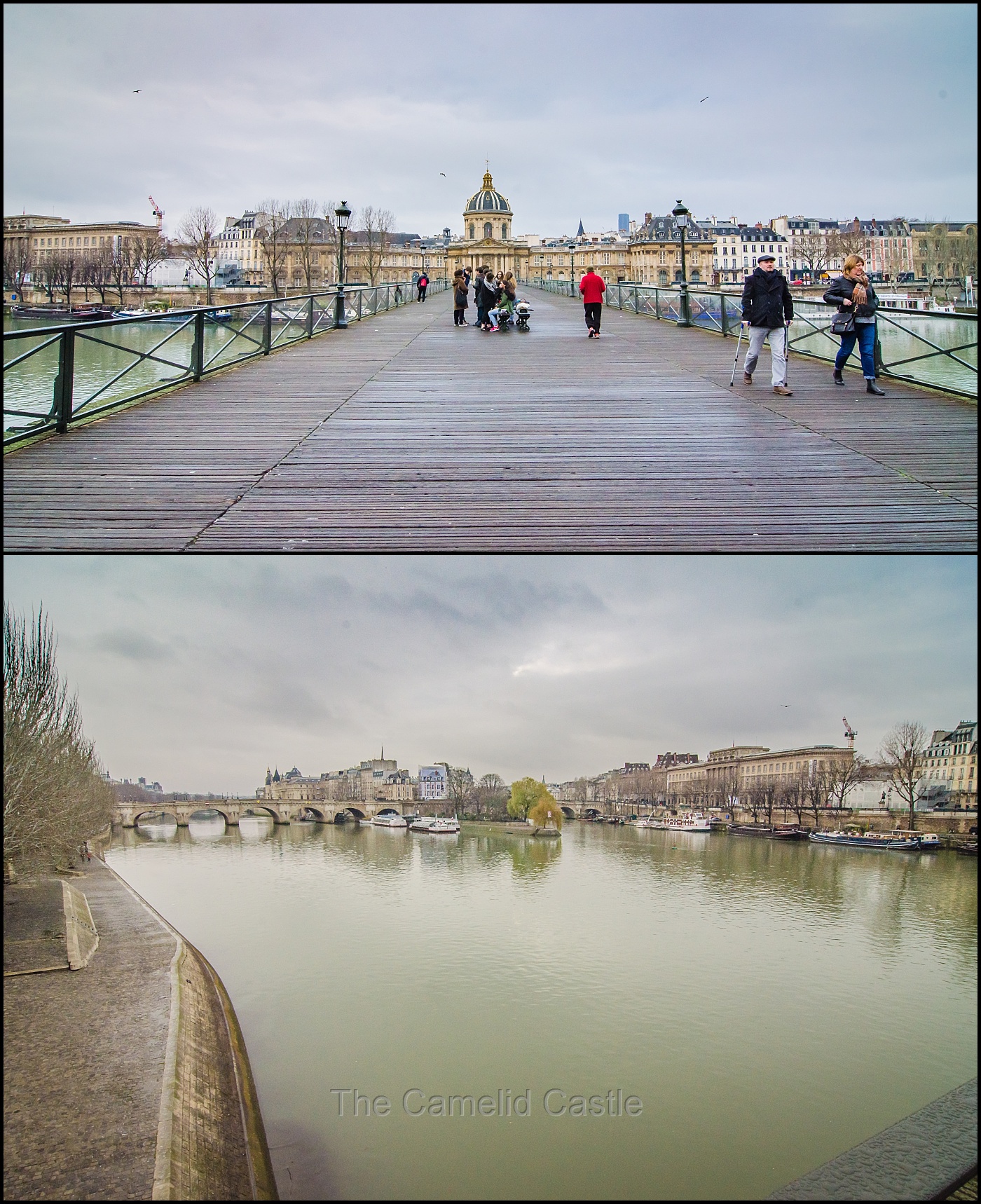 It was interesting to note that the bridges now had glass panels to prevent the masses of padlocks appearing. It was certainly a different look compared to the last time we were here.

We had visited the Louvre on our last trip (although didn’t see a lot of it with an 18 month old in tow).  We had, however, visited the gardens and main courtyard several times, as it’s a beautiful building from the outside, and the sheer enormity of it is hard to comprehend unless you’ve had a good walk around. 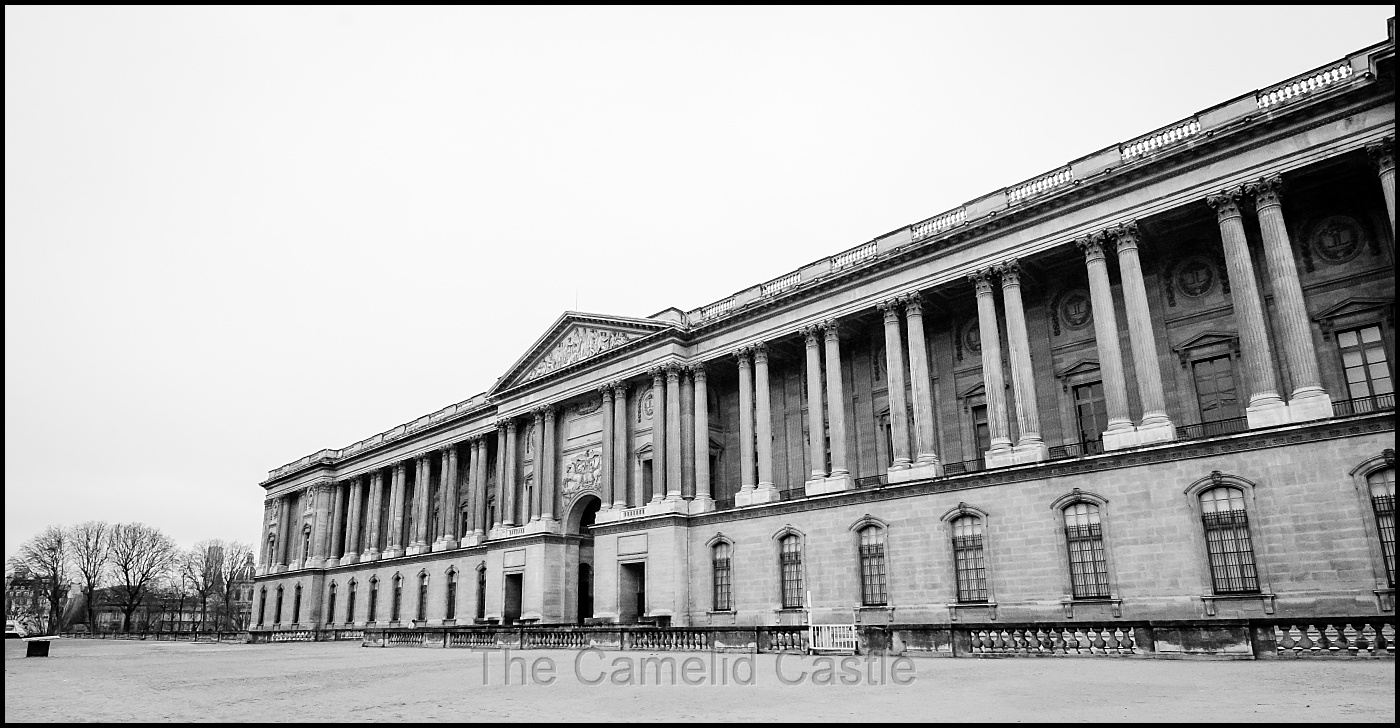 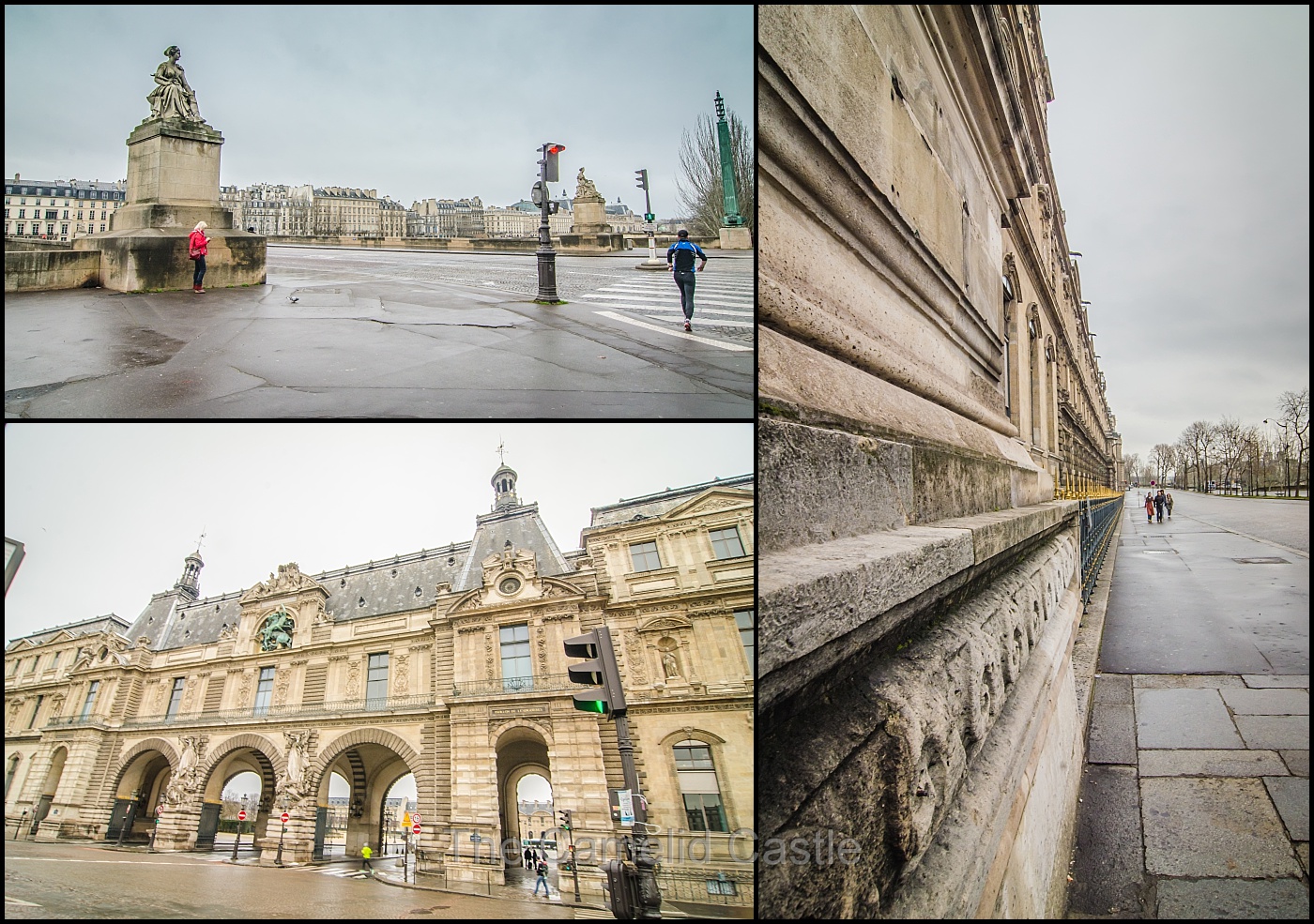 Once we entered the Louvre courtyard, we knew where all the tourists had been hiding all morning – the lines to get in were already quite long! We also noticed that there was now a large security check area outside the entrance, a feature that was not required back in 2012.  Astrid was quite fond of the glass pyramids and had a great time looking through them.  We were definitely all over museums and castles for the trip so were happy to check out the pyramids and statues and head towards the gardens.

From The Louvre we walked down through Jardin des Tuileries. The Tuileries Garden is a public garden located between the Louvre Museum and the Place de la Concorde in the 1st arrondissement of Paris. It was created by Catherine de Medici as the garden of the Tuileries Palace in 1564, and was eventually opened to the public in 1667, and became a public park after the French Revolution. 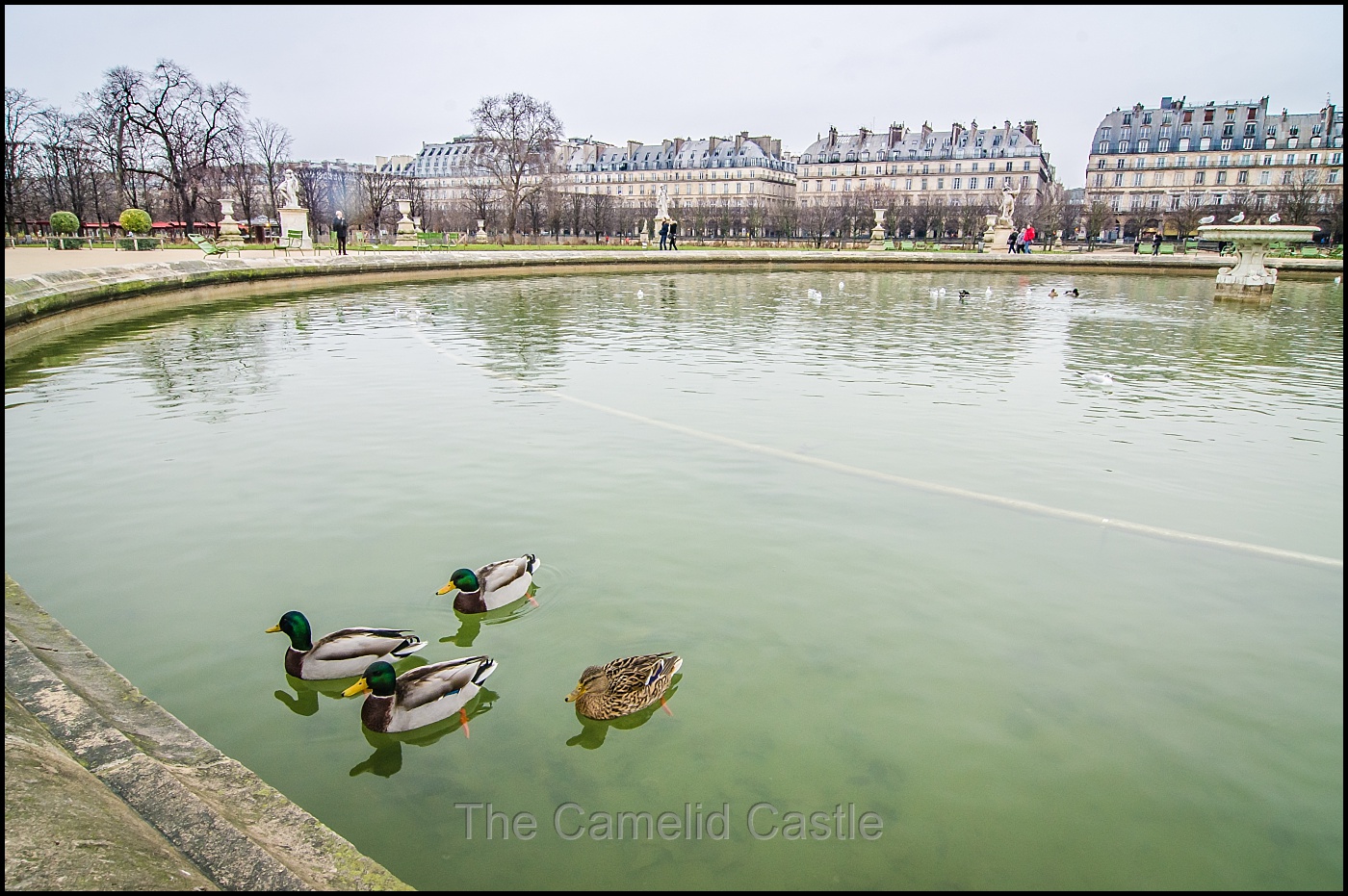 Even in Winter, it is a beautiful park to walk through, with lots of ponds, ducks, garden beds and statues.  The kids are always a fan of trying to get wet, while checking out the ducks.  Being a Sunday morning, there were quite a few families out and about, but a high percentage of the park traffic was joggers. 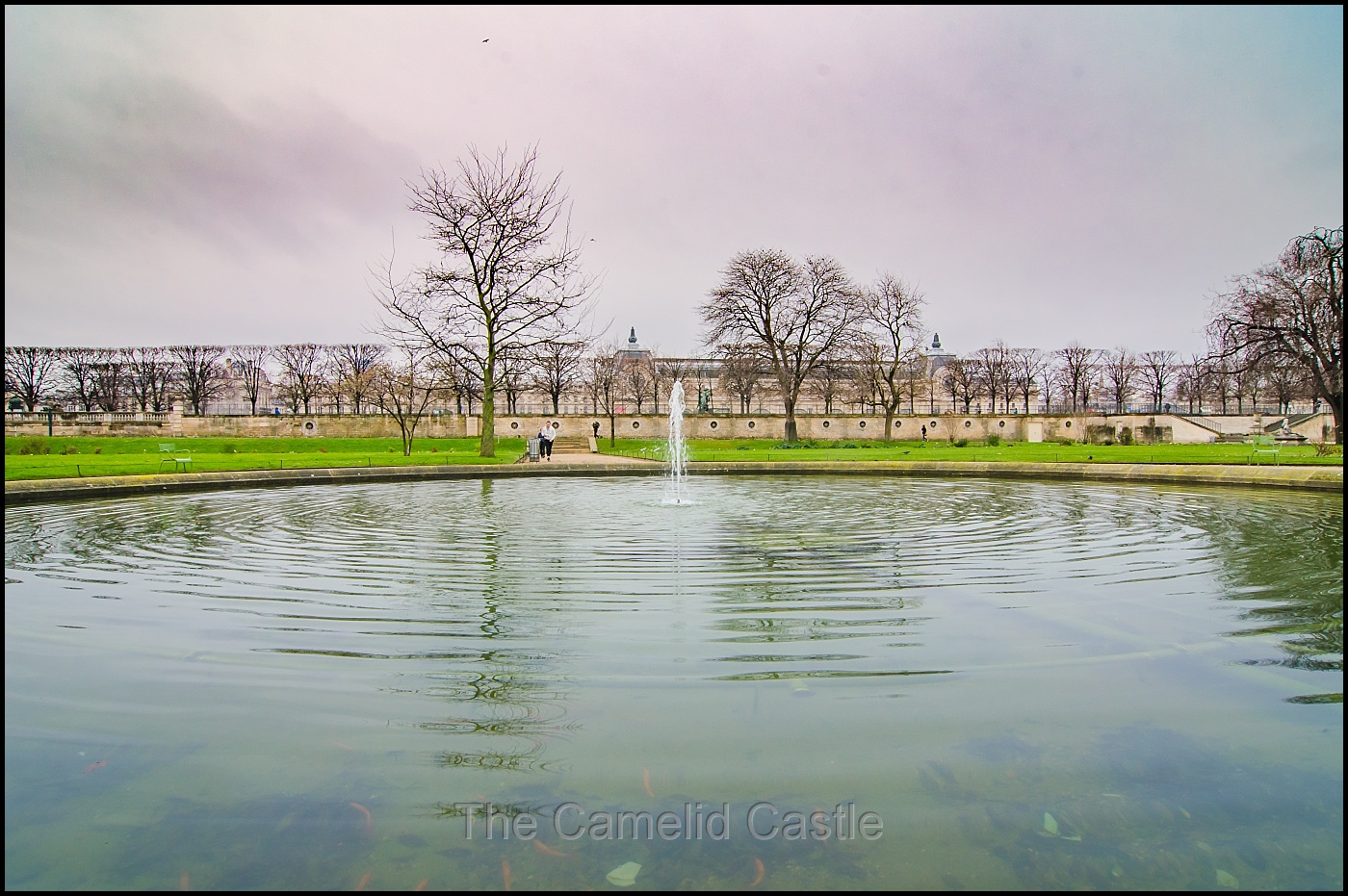 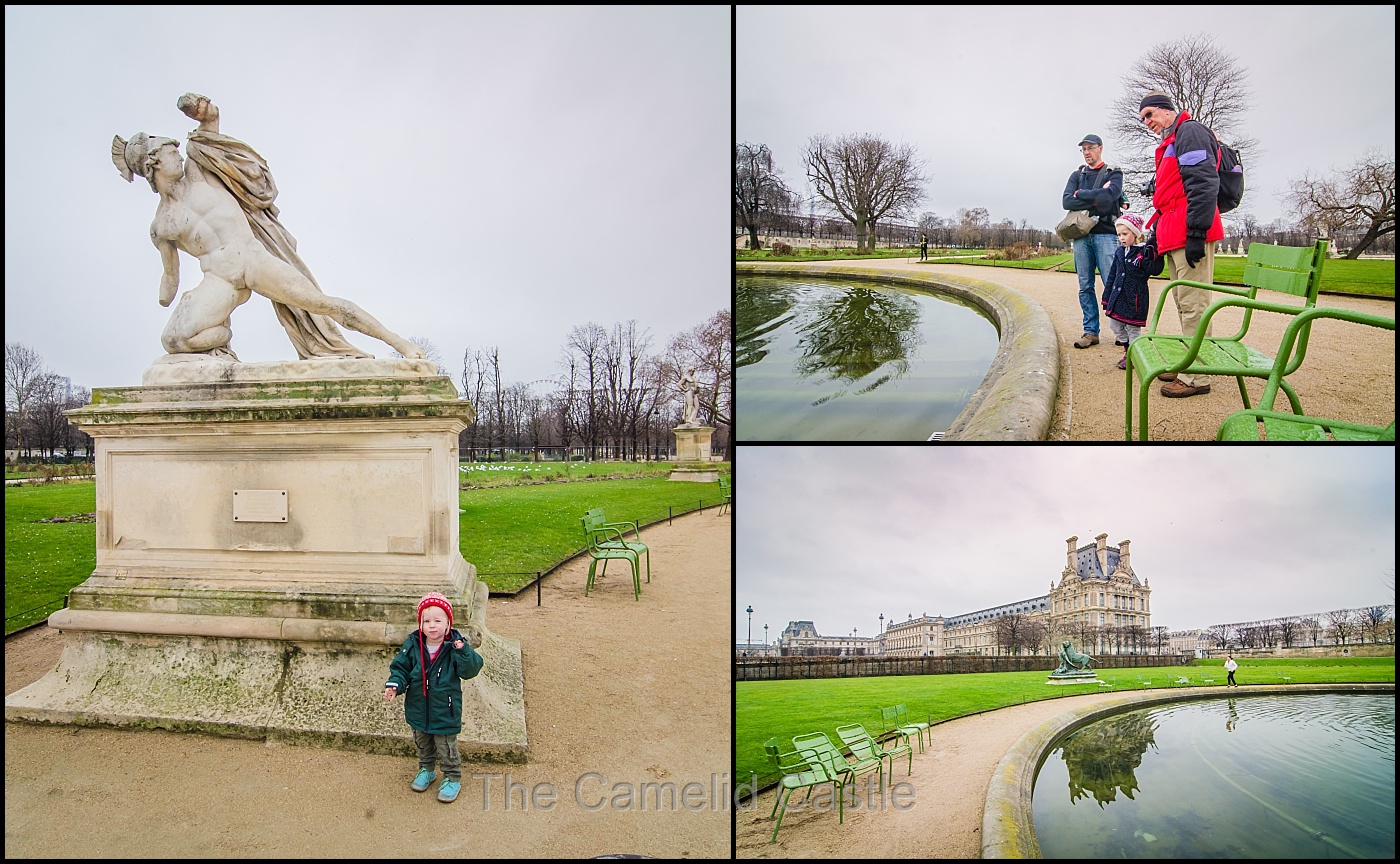 The only downside of Jardin desTuileries is that it attracts a large number of souvenir sellers and people who want you to take one of their ‘surveys’ while they pickpocket you. The number of times we had someone try to stop us between The Lourve and the Arc de Triomphe was impressive, but they are easy enough to ignore.  As we walked through the park the kids spied the Grand Roue or Roue de Paris, the giant Ferris wheel between Jardin des Tuileries and Place de la Concorde.  Like moths to a flame, the kids were happy to keep moving in the direction of the ferris wheel! 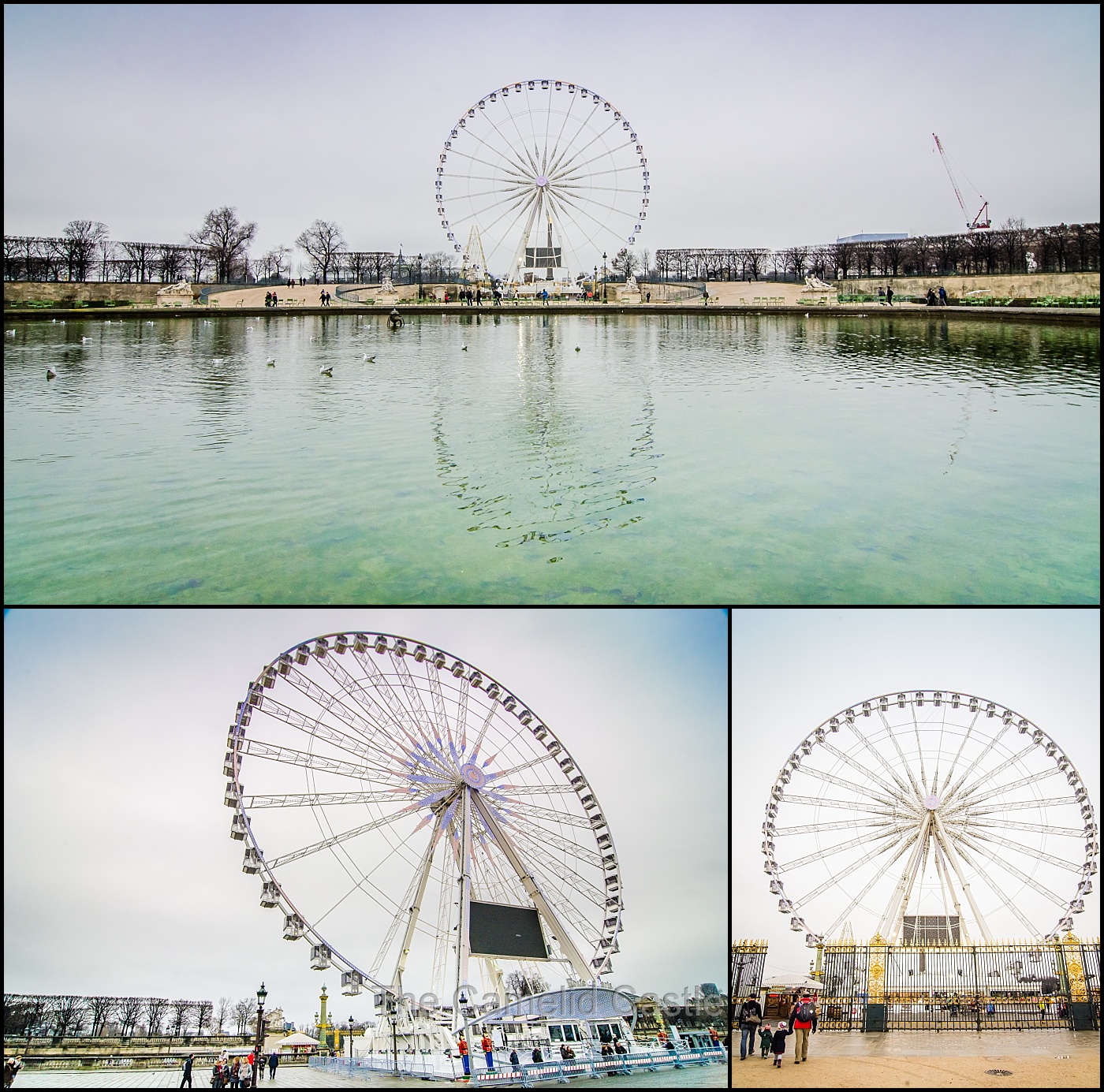 We had no intention of letting them have a ride, but it did look rather pretty, with its very prominent location.  Luckily for us, they were happy to negotiate a ride on the much cheaper Carousel at Hotel de Ville, instead and we escaped the lure of the Grand Roue.

We crossed the road to check out the obelisk at Place de la Concorde.  The Luxor Obelisk is a 23 metres high Egyptian obelisk standing at the center of the Place de la Concorde. It was originally located at the entrance to Luxor Temple, in Egypt.  Since our last visit a new garden pyramid had also appeared. 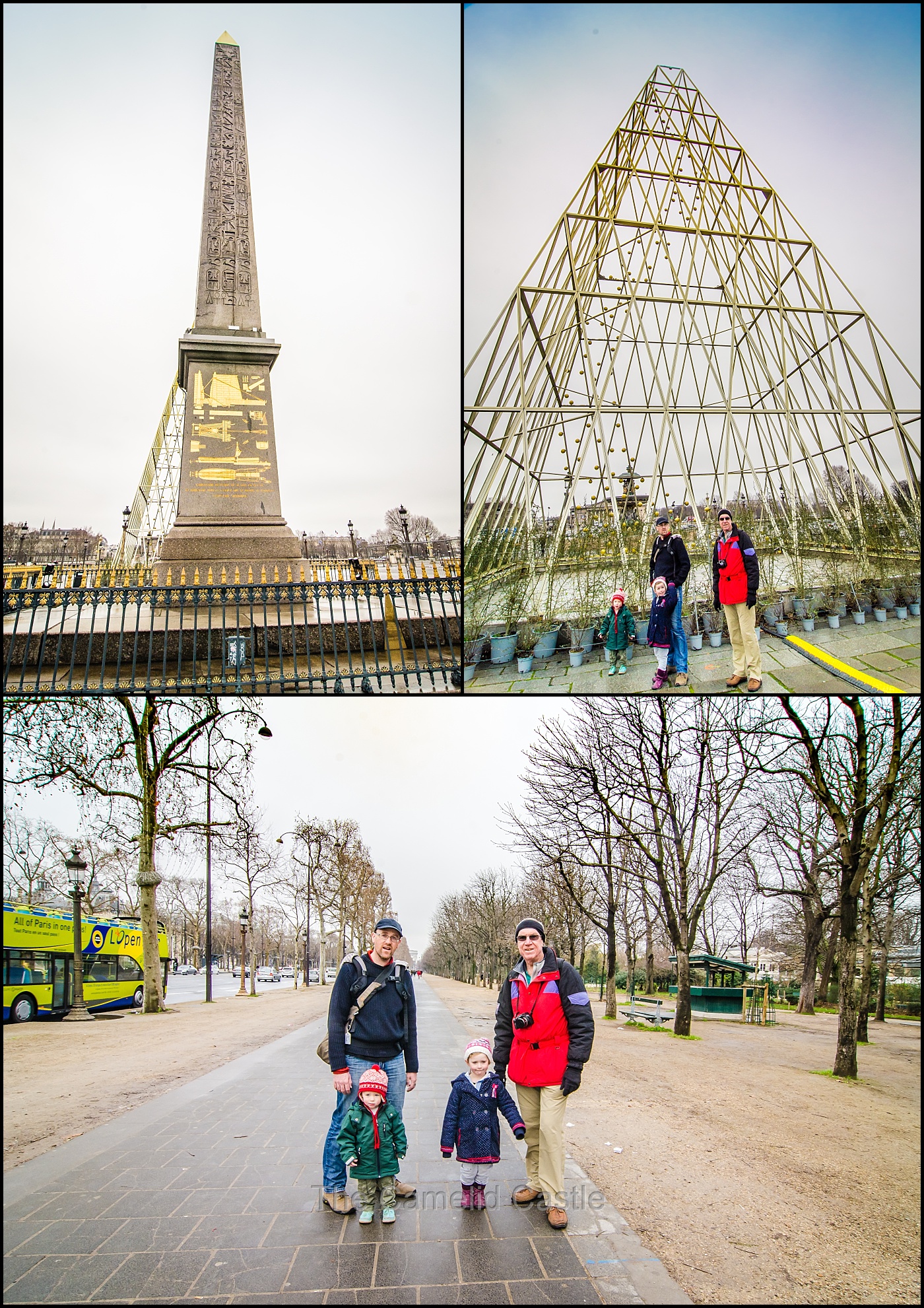 We then strolled down the very famous Avenue des Champs-Élysées, a boulevard in the 8th arrondissement,  1.9 kilometres long and 70 metres wide, which runs between the Place de la Concorde and the Place Charles de Gaulle, where the Arc de Triomphe is located.  In Summer this area is full of street stalls and crepe sellers, but on a cool Winter’s day there wasn’t much going on until we hit the shopping strip.  Despite having little interest in buying anything from any of the high-end boutiques on the Champs-Élysées, we enjoyed a little window shopping and took in the views towards the Arc de Triomphe. 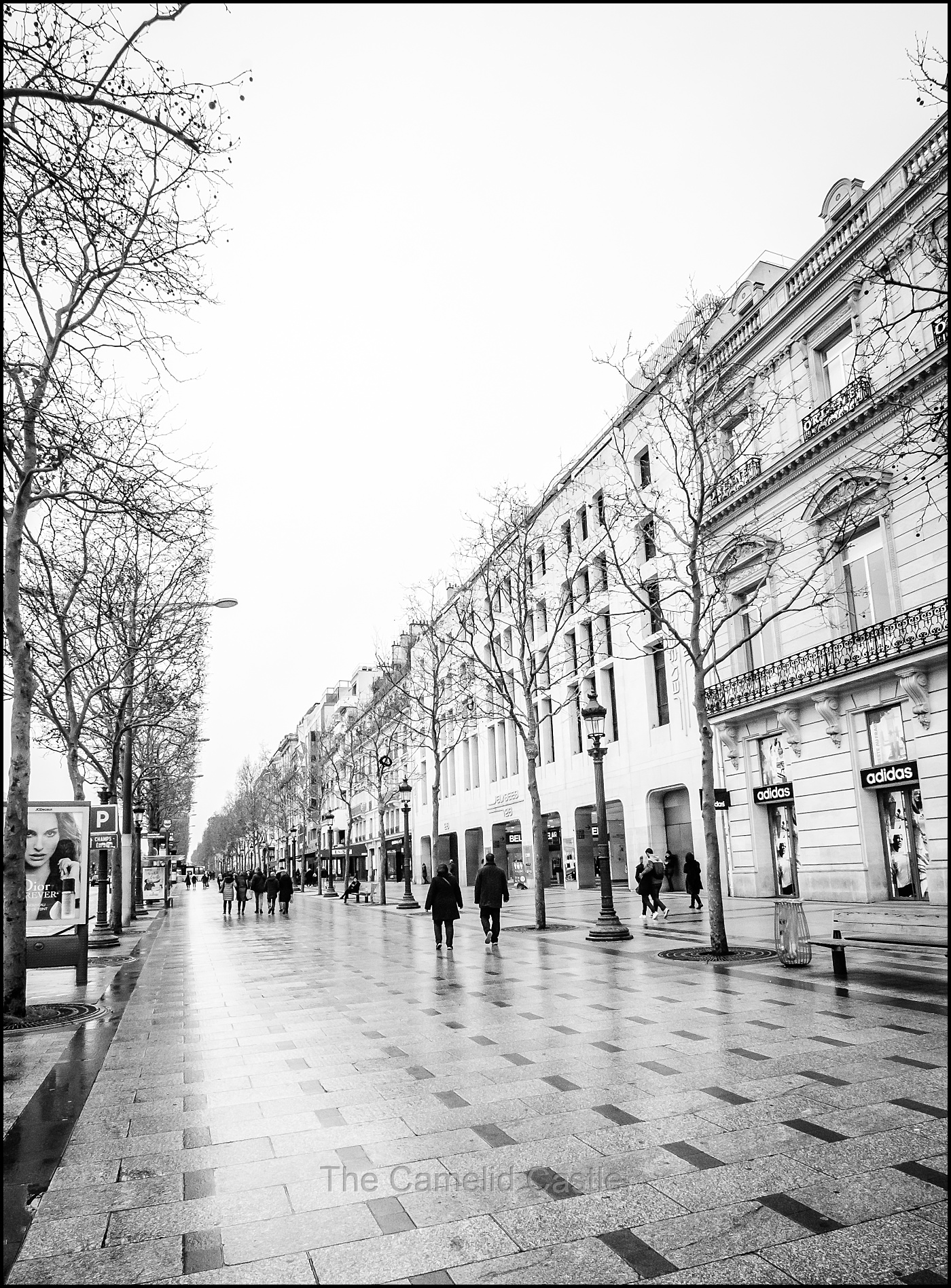 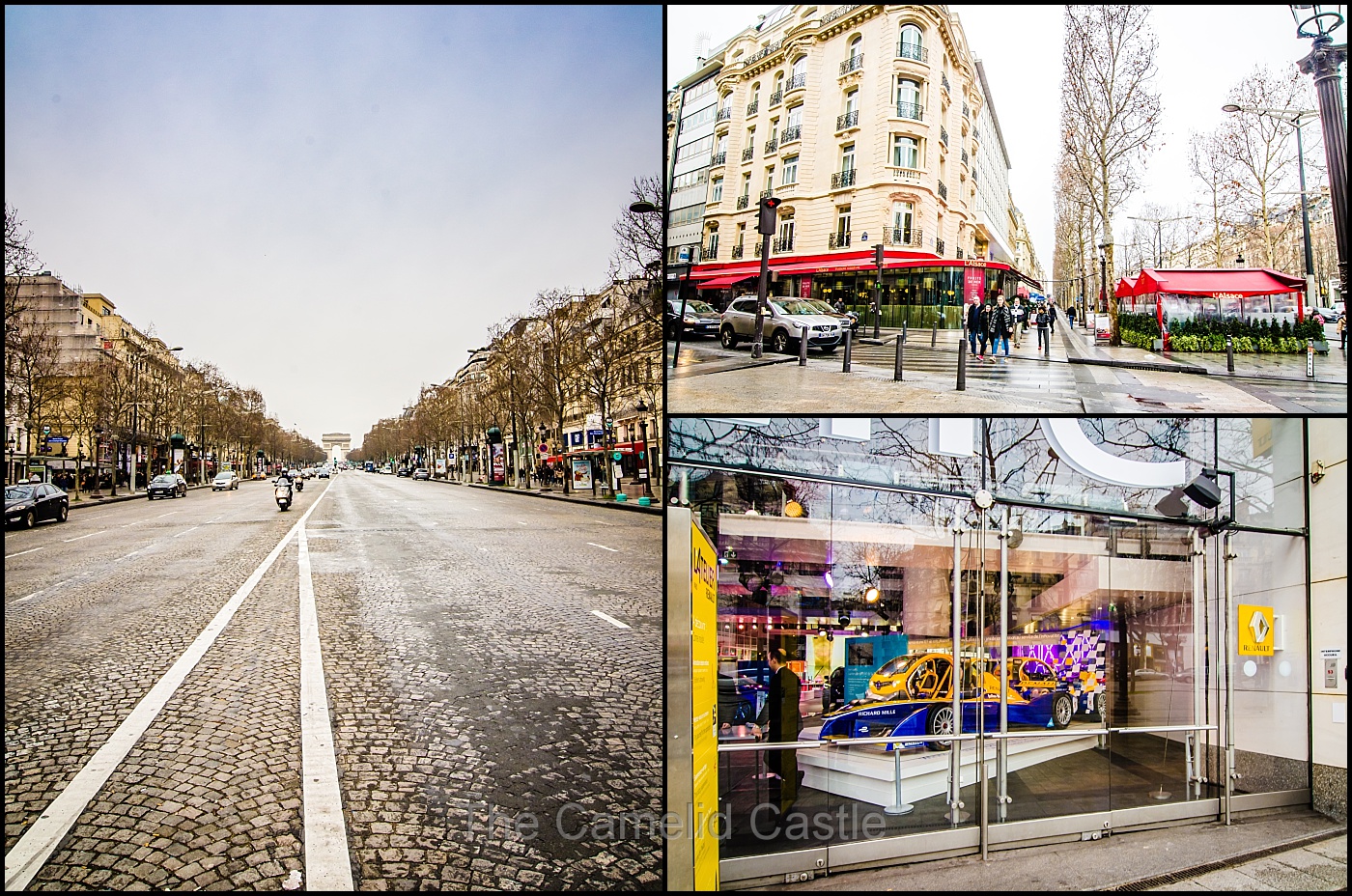 Once we hit the shopping strip we made a bee-line to Ladurée. Ladurée is a French luxury bakery and sweets maker house created in 1862. It is one of the world’s best-known premier sellers of the double-decker macaron, fifteen thousand of which are sold every day. We had visited their Champs-Élysées store several times during our last trip, and definitely wanted to take the kids back for another visit.  The restaurant was very busy and there was a long wait for tables, but we were more than happy to head to the bar area for our morning tea.  We’d been to both the restaurant and the bar, previously and both were worth visiting.

Our very first visit to the Ladurée bar resulted in us accidentally ordering the most delicious cold chocolate drink. Most probably due to our poor French.  Despite several visits and constantly perusing the menu, we haven’t been able to replicate that mis-order but settled for hot chocolates and Viennese coffees along with some apple turnovers and chocolate pistache croissants. The Ladurée hot chocolates are served in little silver jugs and are thick and chocolaty.  Certainly a treat not to be missed when in Paris!  The kids are huge fans too….

Our bellies full of yummy chocolate and pastries, we decided we really didn’t need any macarons right now (as tempting as it was), so we continued our wander up the Champs-Élysées towards the Arc de Triomphe.  We had been up the top of the Arc de Triomphe, during our previous trip and highly recommend it for the magnificent views of Paris.  Today the lines were a little long, and our legs a little weary, so we decided to skip it and just get the slightly less impressive view from across the street.

Powered on by our morning tea, we thought we might as well walk down to the Eiffel Tower.  We managed to find a few streets that we had never walked before, despite having walked through the area several times.  We found the Museum of Modern Art and some other interesting buildings. 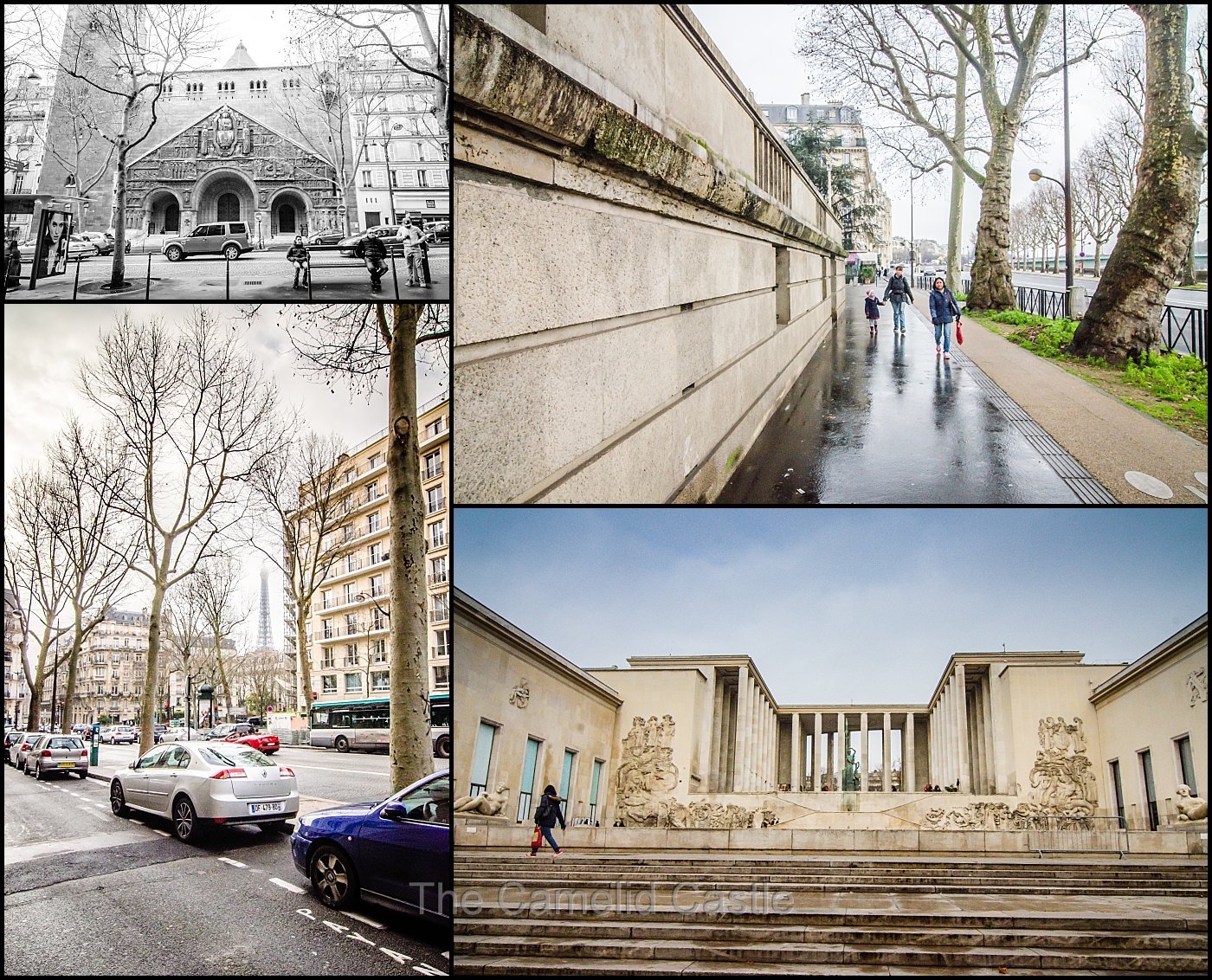 From the time we first spied the Eiffel Tower in the distance, both kids were excited.  Astrid doesn’t remember her last visit to the Tower but likes to look at the photos of herself there!  As we were walking across the footbridge towards the Tower both kids had to pretend to be Eiffel Towers, much to the amusement of other tourists! 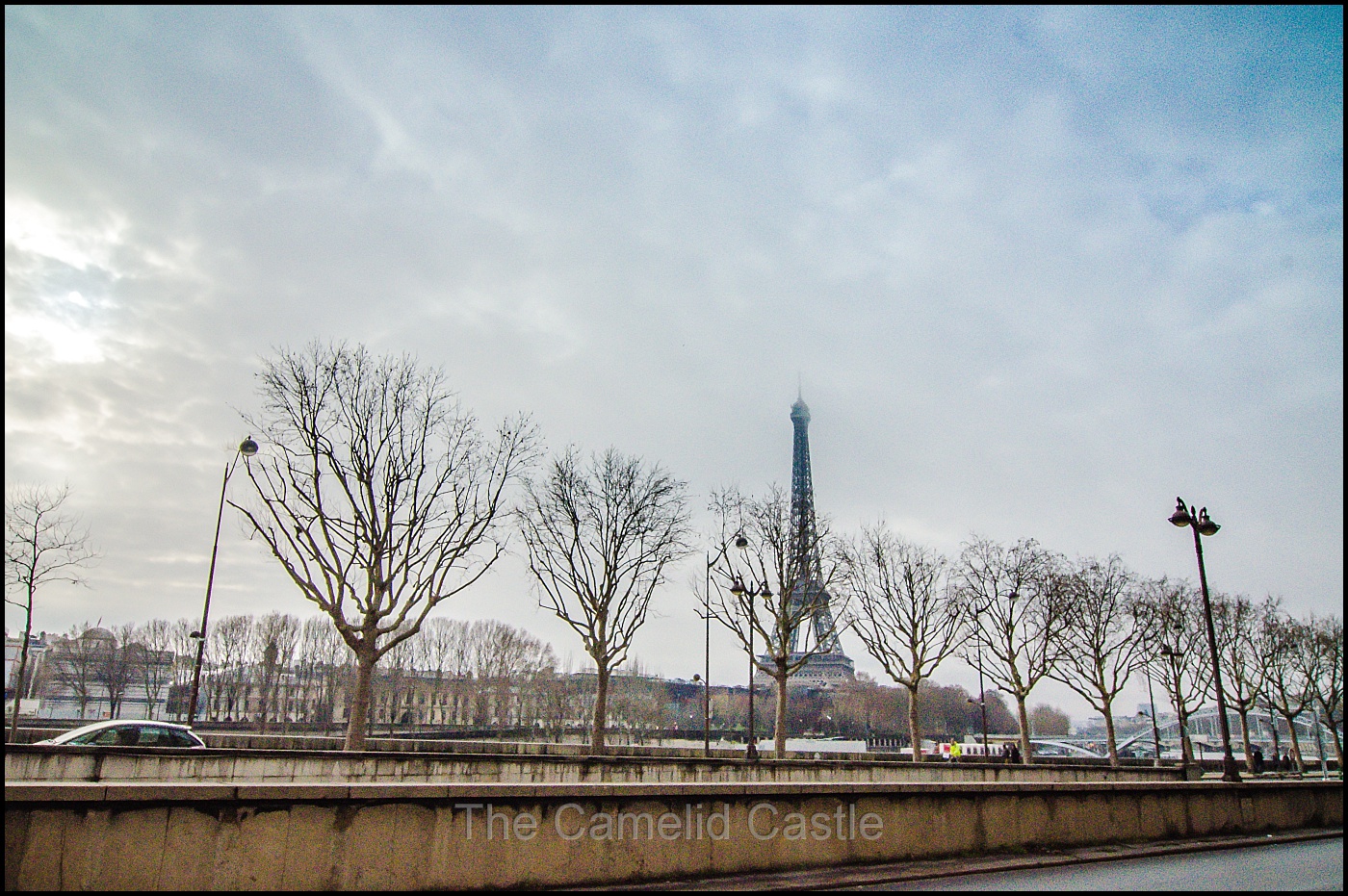 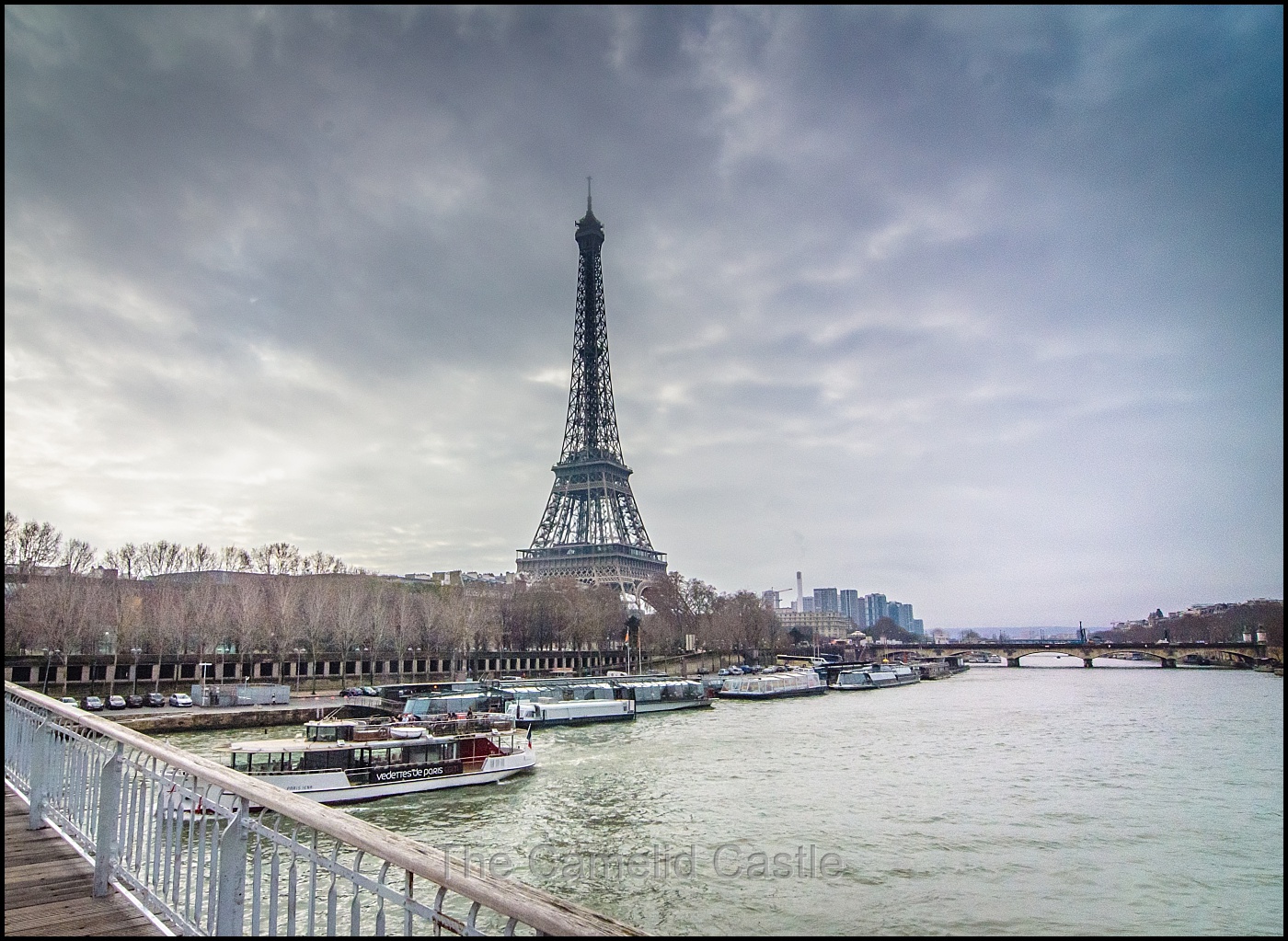 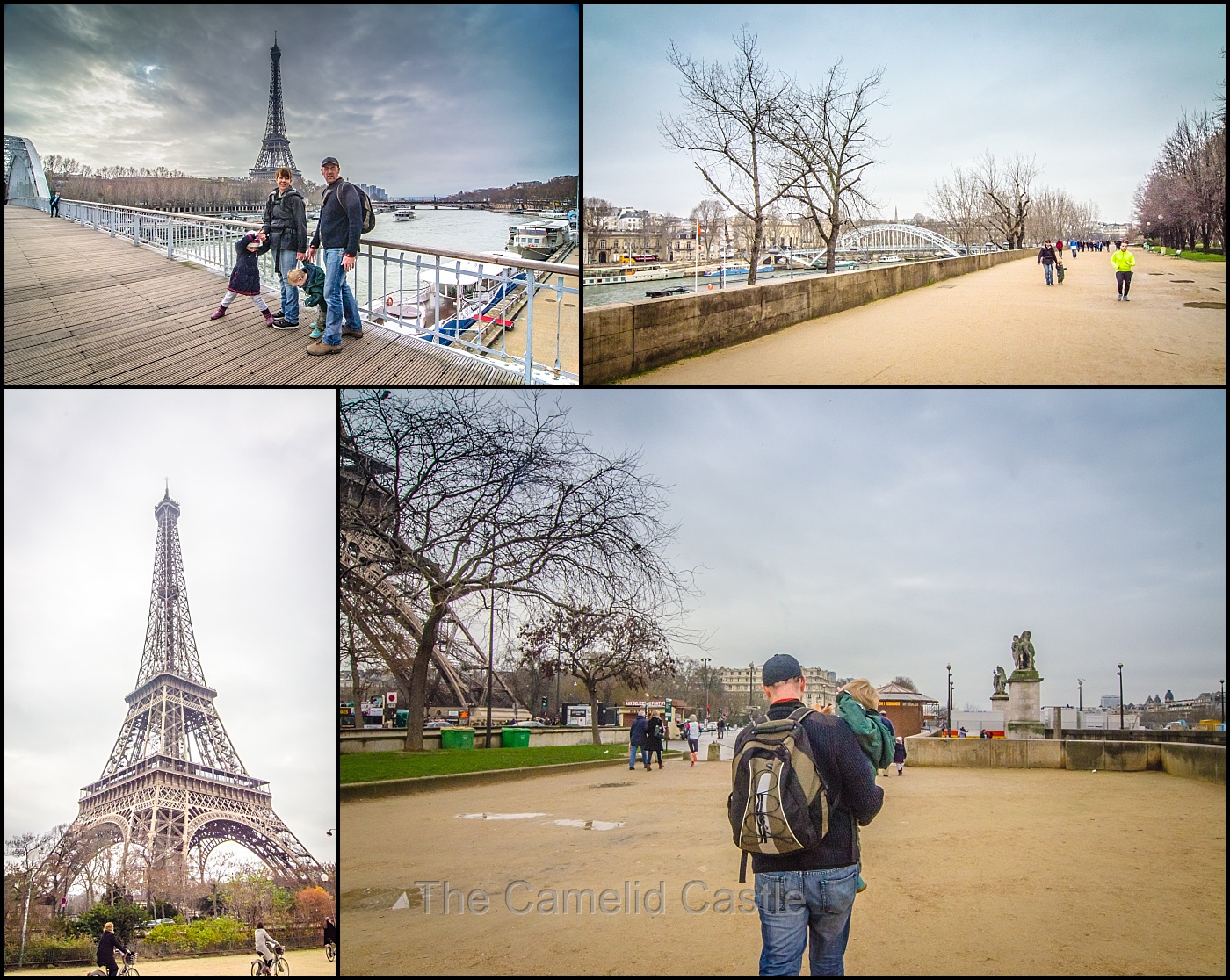 We were surprised to see that the lines to go up the Tower were actually pretty short, for once!  There were still plenty of people around though.  We (with the exception of Soren) all been up the Tower before, so were happy to walk around the enormous metal structure and watch all the lifts and people climbing up. 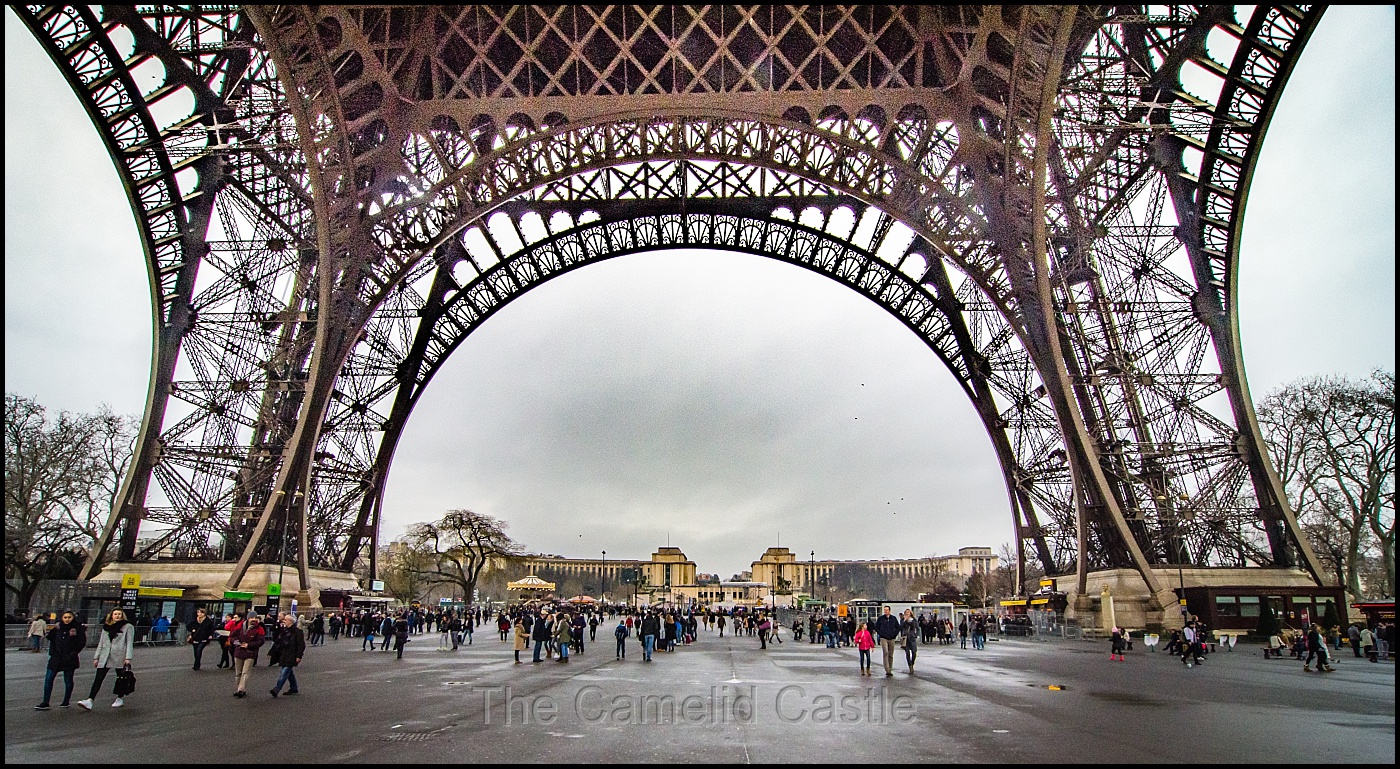 It was starting to rain, our tummies were rumbling, and it was starting to rain so we walked to Champ de Mars metro station so we could catch the RER back towards our apartment and grab some lunch.  Of course all the RER’s were delayed for some unknown reason but we eventually managed to find one that got us (very slowly) to Notre Dame and then we metro’d back to Les Halles.  We then walked up to the pizza restaurant that was under our apartment, in rue Montorgueil, from our 2012 Paris stay. We had eaten at this restaurant many times, and always had a great meal. Despite it being after 2pm we only just managed to get a table.

Having well and truly walked off breakfast and morning tea we ordered a vegie antipasti and 2 pizzas to share.  The pizzas were a buffalo mozzarella with basil, and a prosciutto and champignon.  All the food was just as good as we remembered, and it didn’t last long!

We wandered up and down rue Montorgueil, selecting treats for dinner. We had decided that after a big day out we would have an early night and an easy dinner of baguette and patisserie.  Despite Sunday being the day many shops close, we had no problems picking up freshly baked baguette and patisserie and we even found an open supermarket, something we used to struggle with on a Sunday afternoon.

It was now 11 degrees and we were a little warm with our coats on, so we dropped by the apartment to leave our coats and dinner supplies.  Both kids were rather tired, but it was too late in the day for napping, so we thought we’d take them down to the park at Les Halles for a run around.  The park was fairly busy, being a weekend.  The kids didn’t care and were straight back onto the slide and train.  Over-tiredness hit and there might have been a slight Astrid tantrum about leaving, but they had a good hour of running around, and mostly leaving us in peace. 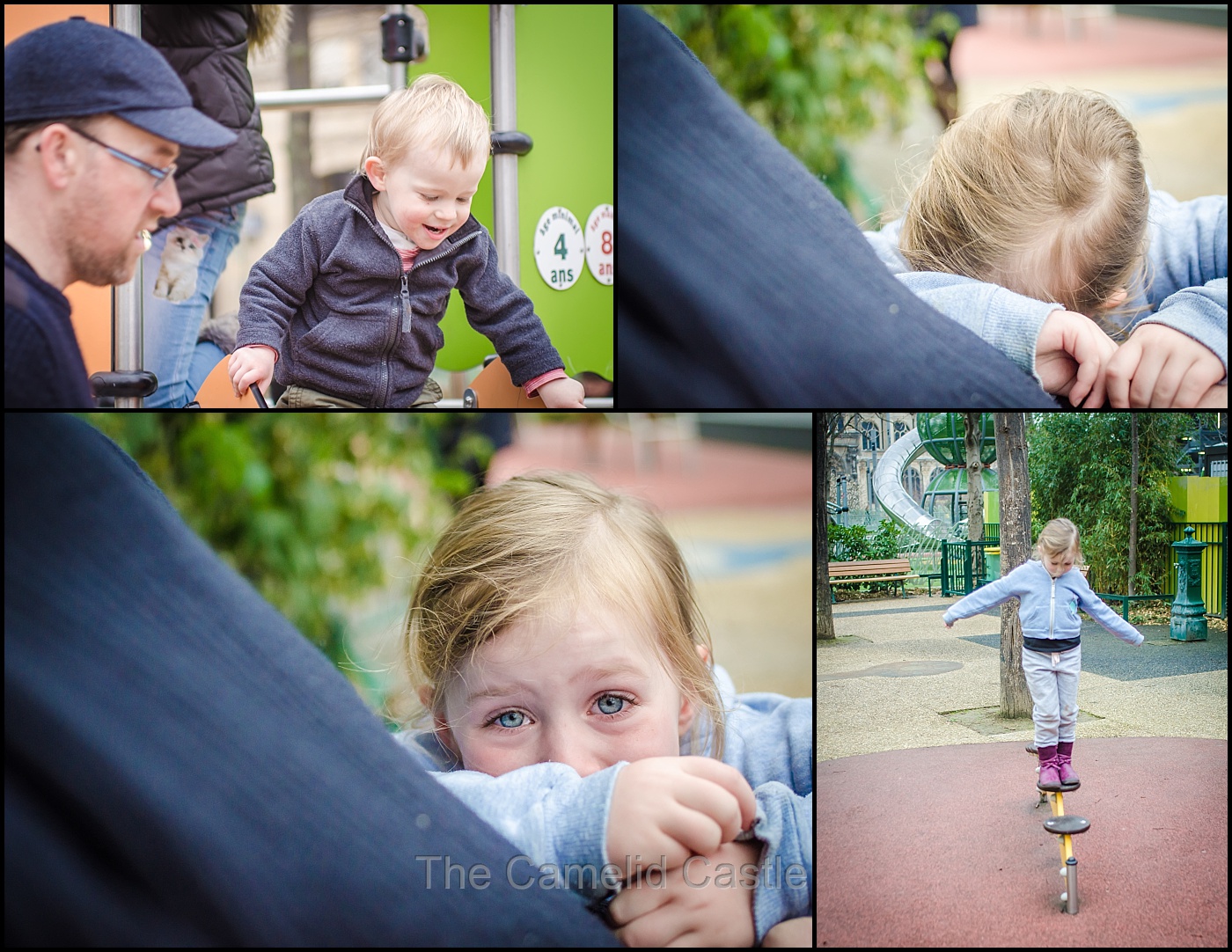 As we walked back towards the apartment, we ran into a massive mob of paparazzi, and screaming fans, all camped outside a hotel for someone called ‘Paul Smith’.  After some googling we determined he was a fashion designer who had a show at Paris fashion week, which was on that week. Clearly we are not up to date on the Paris fashion scene!

Back at the apartment just before dark, it was a relaxing evening of baguettes with combinations ham, cheese and tomato and liberal dashings of French butter.  There might have also been French wine for the adults! The evenings patisserie treats were a tart citron, flan with apricot, a chocolate eclair and a gateaux opera.  Time was short and there was a lot of patisserie that needed to be eaten, so 4 choices seemed like a wise idea! 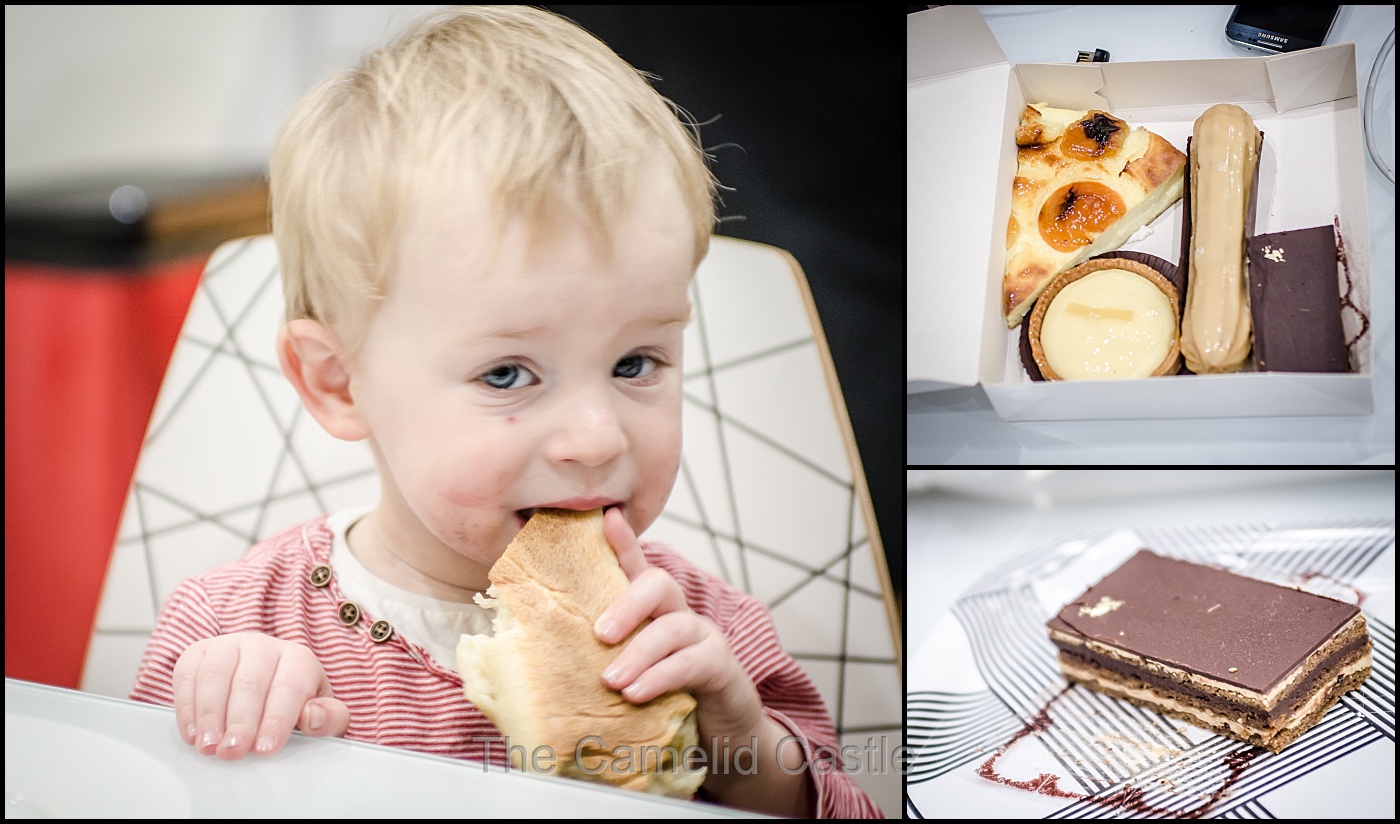 Statistics for Sunday the 24th of January, 2016, in Paris, France – it was a very mild 4 to 11 degrees, with a mean temperature of 8 degrees. Perfect walking weather!  We certainly racked up the kilometeres, 17.5 of them in fact!  Paris is an extremely walkable city.  Astrid walked the whole lot, a very impressive effort as that would be over 35,000 steps in a day for her.