My last post was on Astrid’s birthday, and was my annual reminiscing about the preceding year in her life.  When you turn 5 it’s a pretty big deal, so we had a lot of celebrating to do!  Her actual birthday was a Wednesday, so a school day, but there was still time to indulge in birthday festivities.  We had a huge party  a few days after her birthday, but more about that later….

Once we had tucked our 4-year-old up in bed for the last time, it was time to clean up the mess from the afternoon’s cupcake baking efforts (that had included cleaning up a rather smurf-looking Soren, who was enjoying the icing). Then lay out the presents, for the big event in the morning. 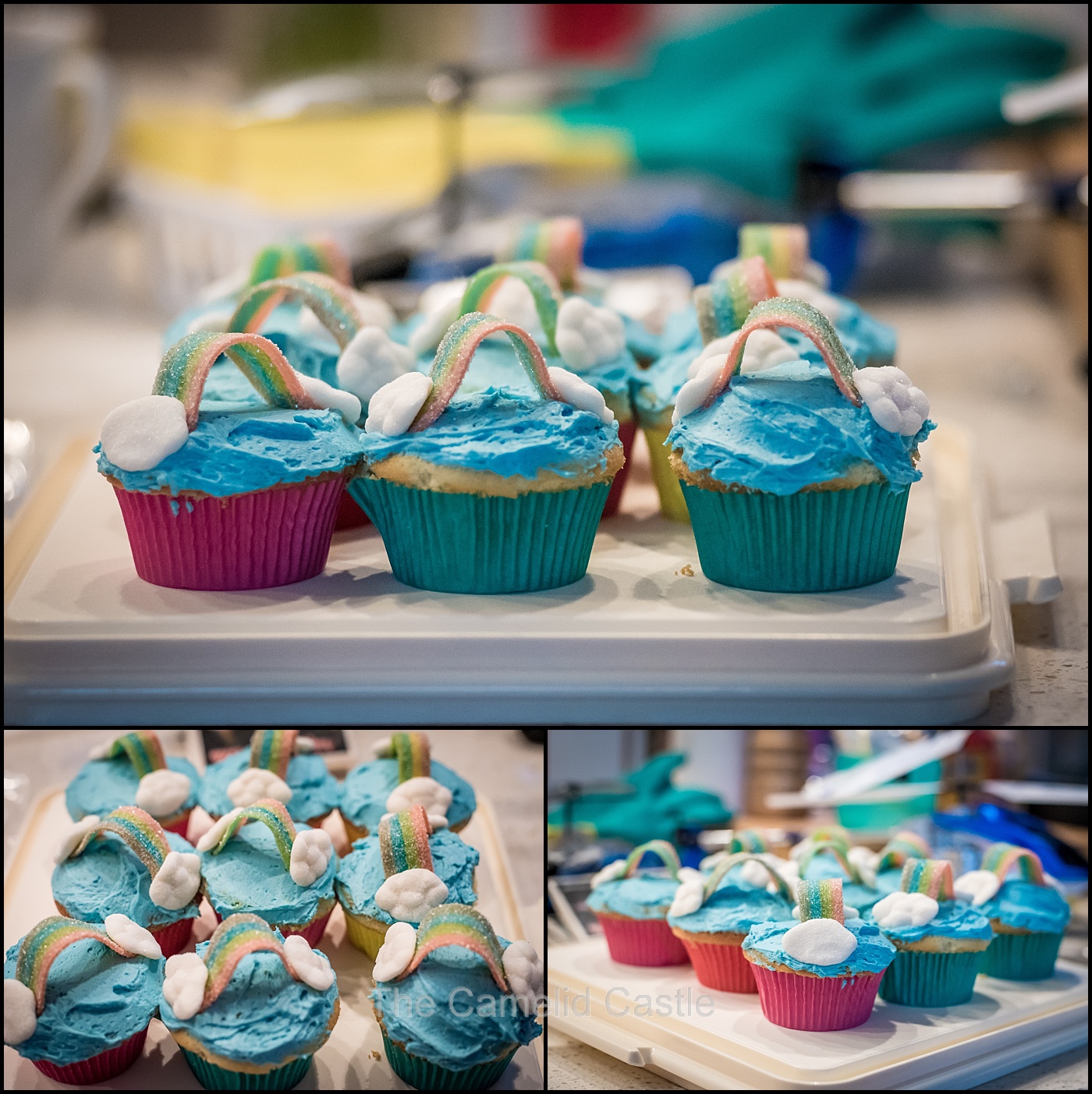 Can you guess by now that this years birthday theme is rainbows?  The cats were nonplussed about all the pre-bedtime activity and were mostly wondering how they could get into those brightly wrapped things! 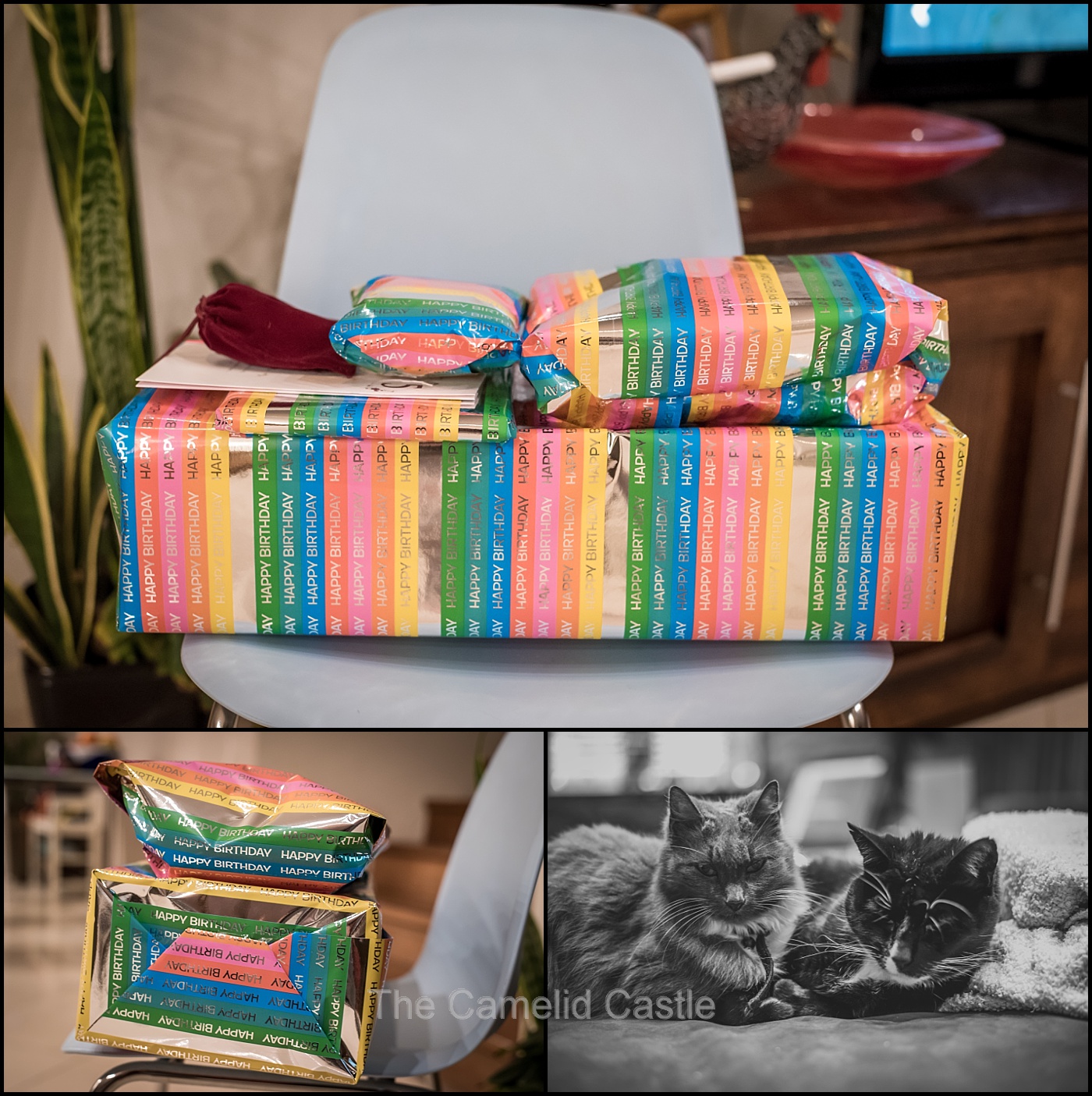 Feeling rather smug that we were all organised, we remembered at 10pm that we hadn’t yet made the birthday breakfast crepes!  Anto had made the usual offer of ‘whatever you want for a special birthday breakfast’…. we knew the answer would be crepes or pancakes. It was crepes, and being a school-day we thought pre-making them was a good idea.  A great idea at dinner time, but not so great at 10pm as they take a while….  Kind of reminiscent of 5 years prior when we were up all night before she arrived.  At least this time I could leave Anto to it and get some rest!

A very excited little girl was up, with her bed made and ready to open presents at 7am…… Her parents were not feeling so chipper! 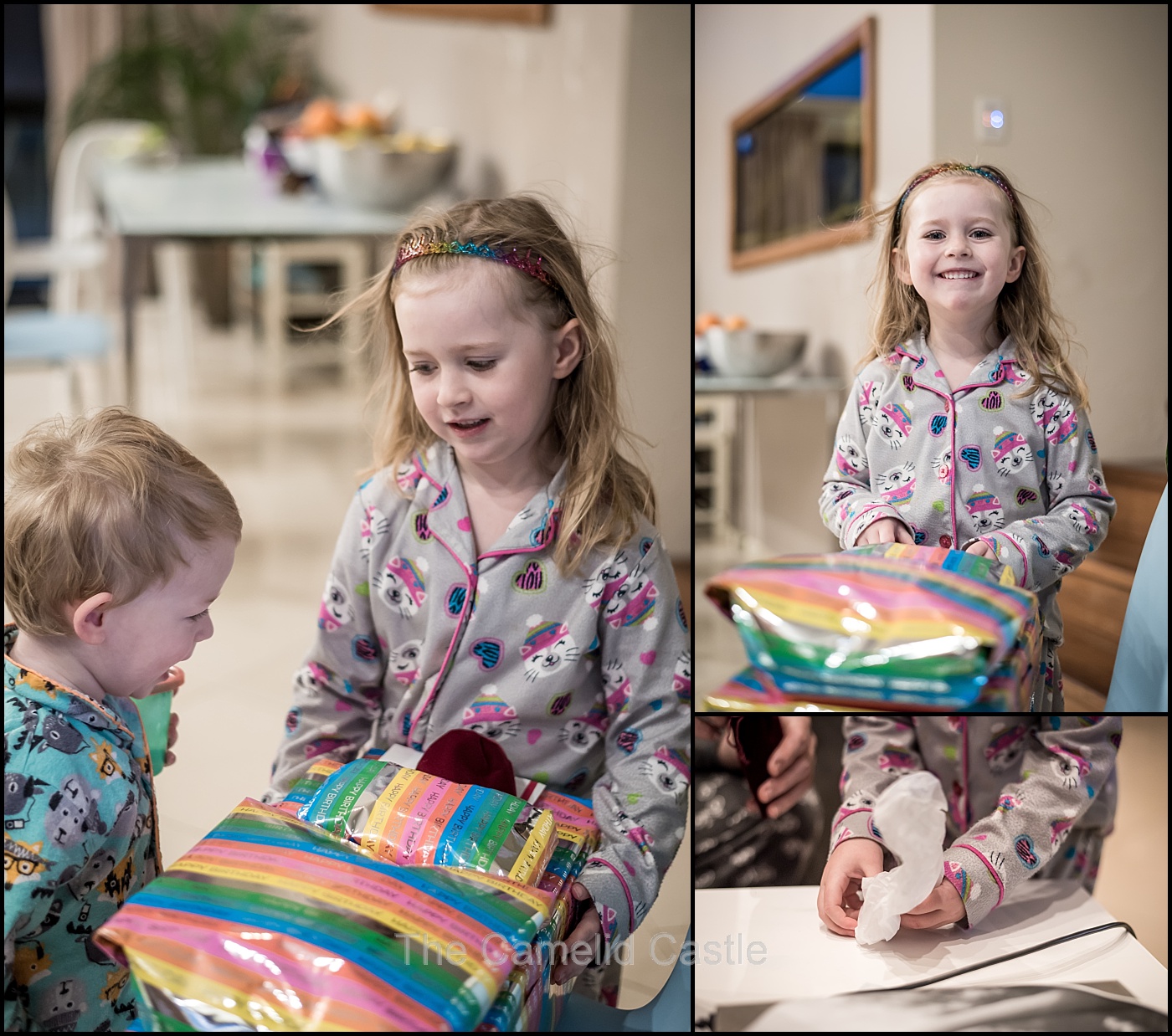 Soren was also very excited about ‘A’s’ birthday, and had to be restrained from the presents, but Astrid kindly let him help her without even being asked.

All the presents were hits, especially the glass alpacas she had been desperate for.  The doll was a big surprise and had been purchased by Anto during his recent US work trip…… but had gone (temporarily) missing with his luggage, so we were pleased Astrid loved it.  The surprise hit was the ‘Paris journal’ I had found for her.  She has already played several games with it and decided her new glass alpacas could ‘live’ in Paris. 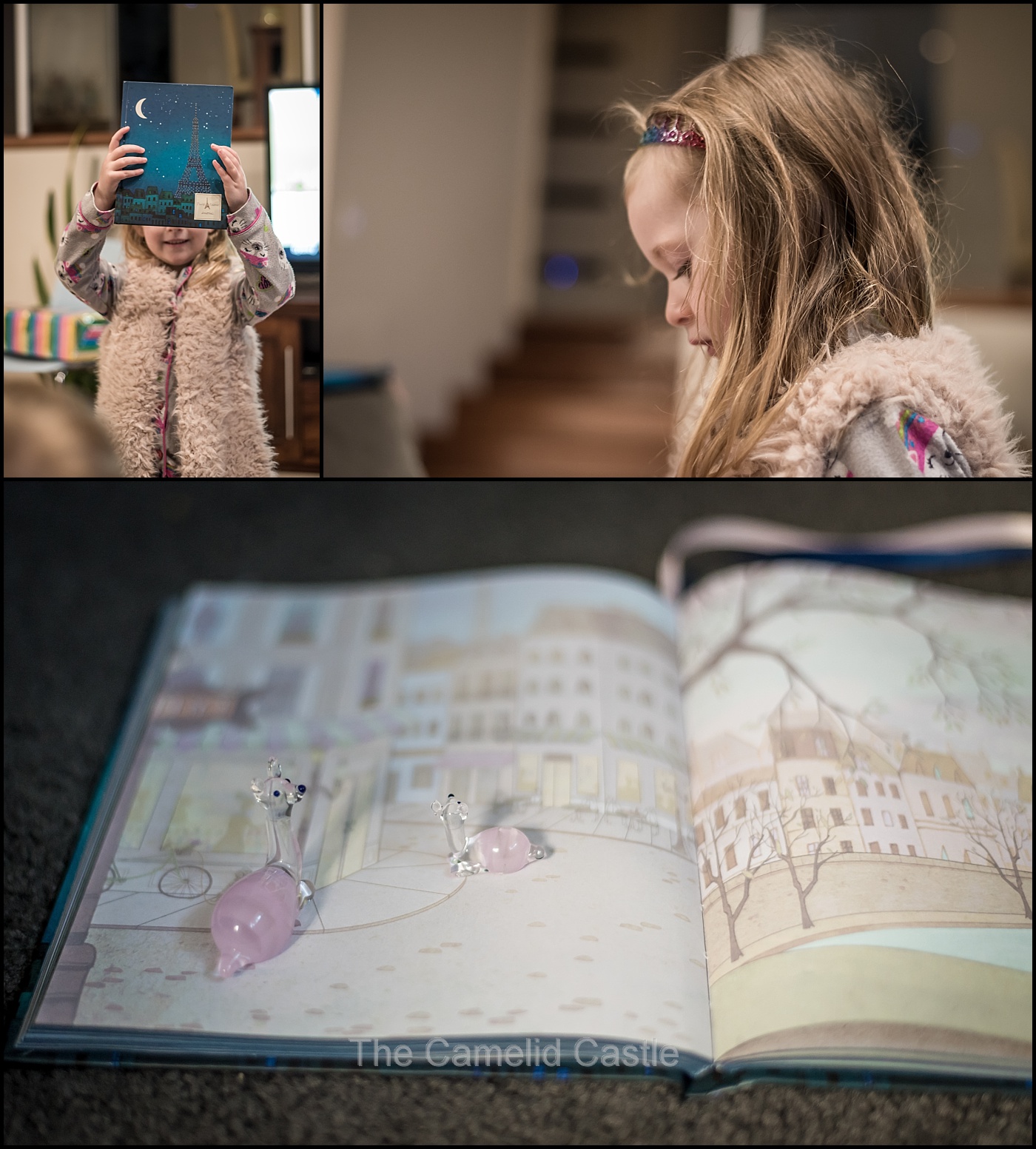 After a very quick play with presents it was time for that special birthday breakfast.  We had run out of bananas so Astrid thought she’d just have to make do with nutella and cream on her crepes. It was not going to be a great week for healthy eating, so I doubt the banana would have improved the situation……

Both kids are quite the crepe connoisseurs! 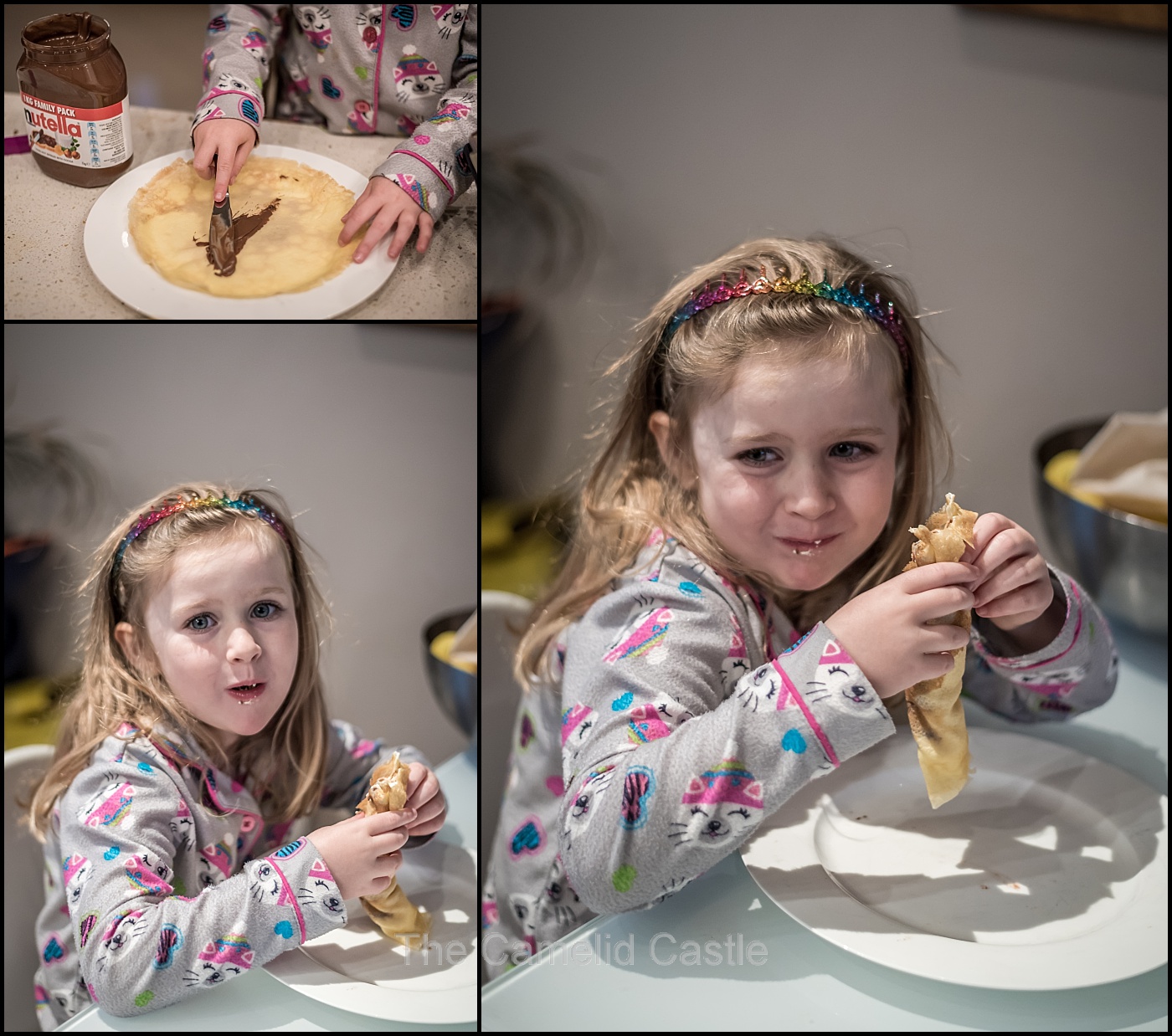 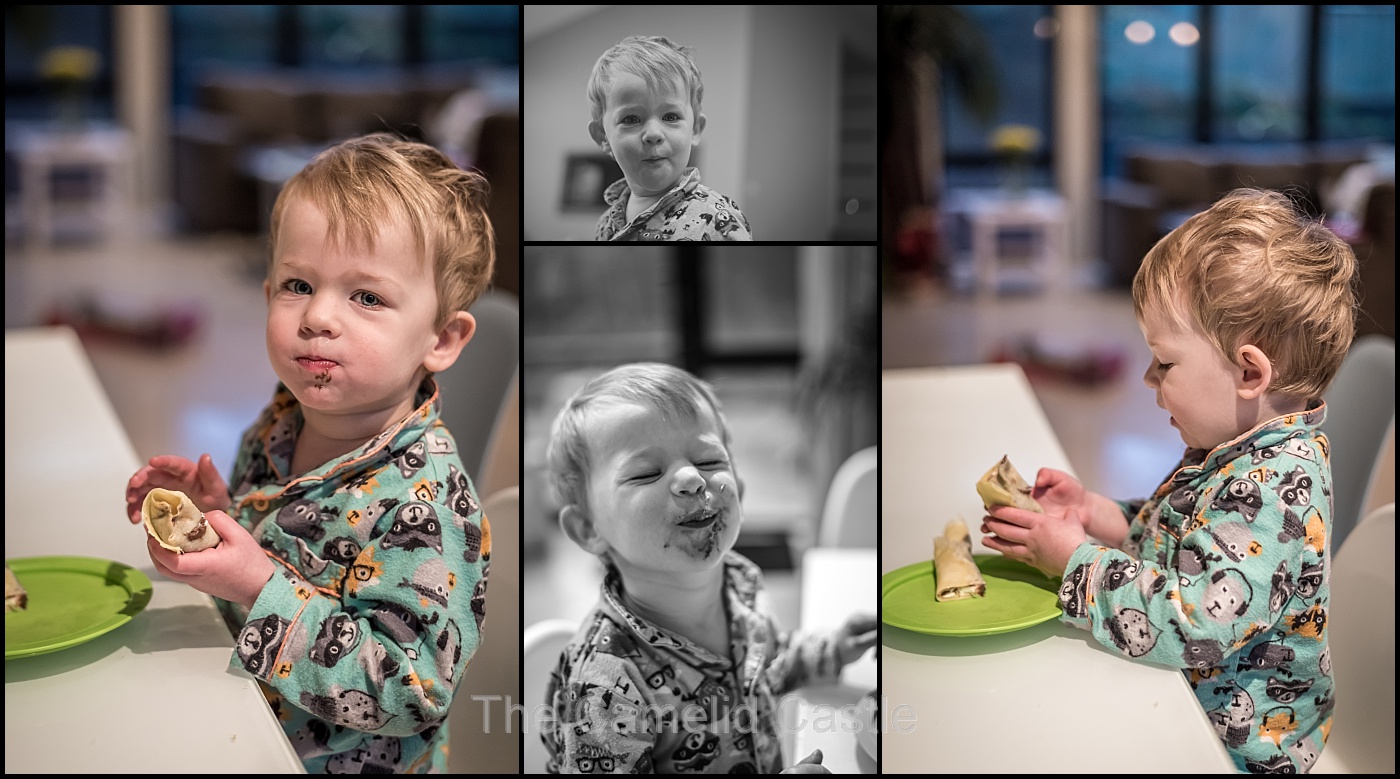 Mid-rounds of crepe Astrid officially turned 5!!! She was a little bit excited…… 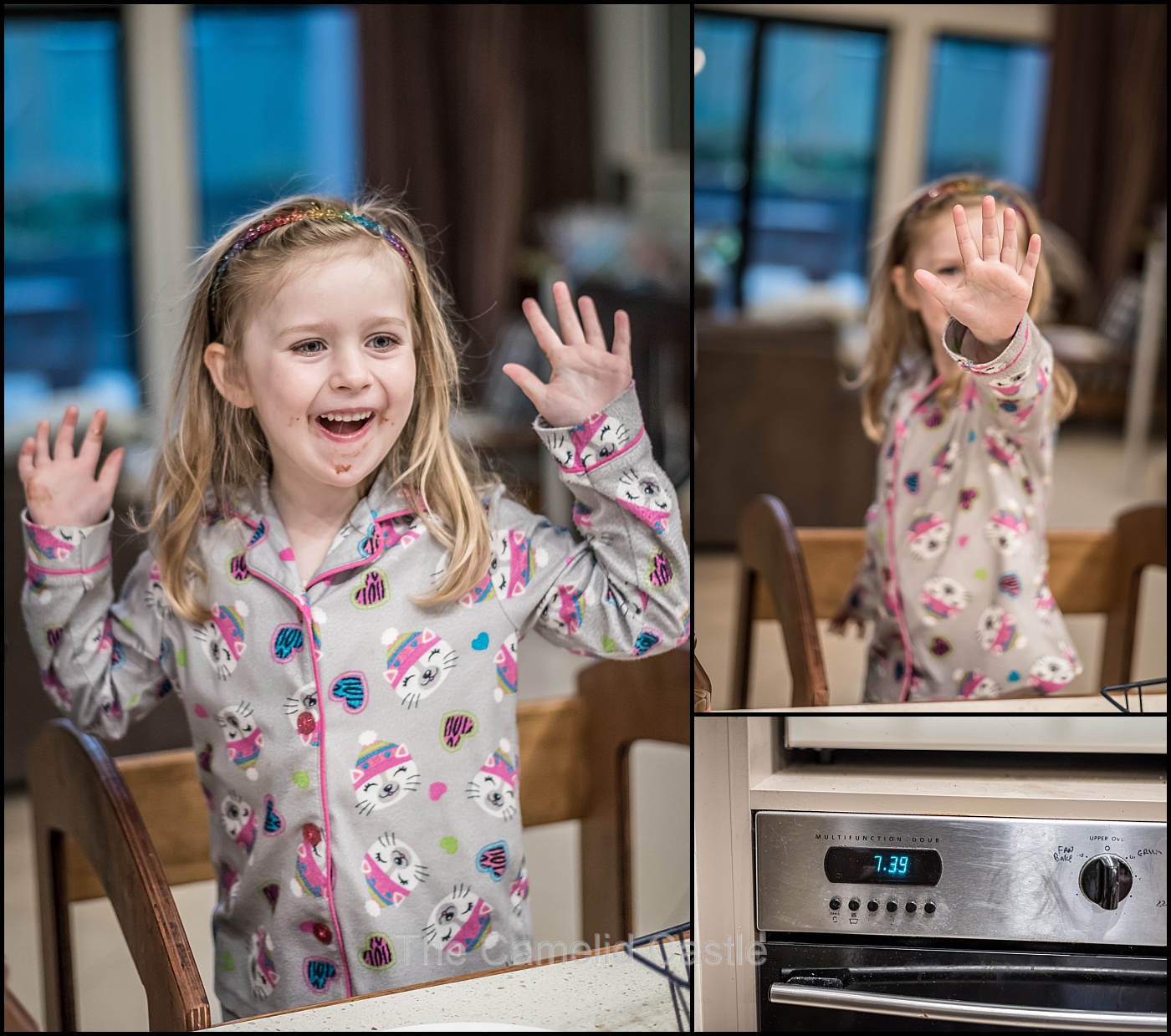 Full of delicious breakfast, and with way too much excitement, we did manage to get her dressed and ready for school.  She was rather excited to spend her first day as a 5 year-old at school with her friends, and take the 2 dozen sugar laden rainbow cupcakes in to share. 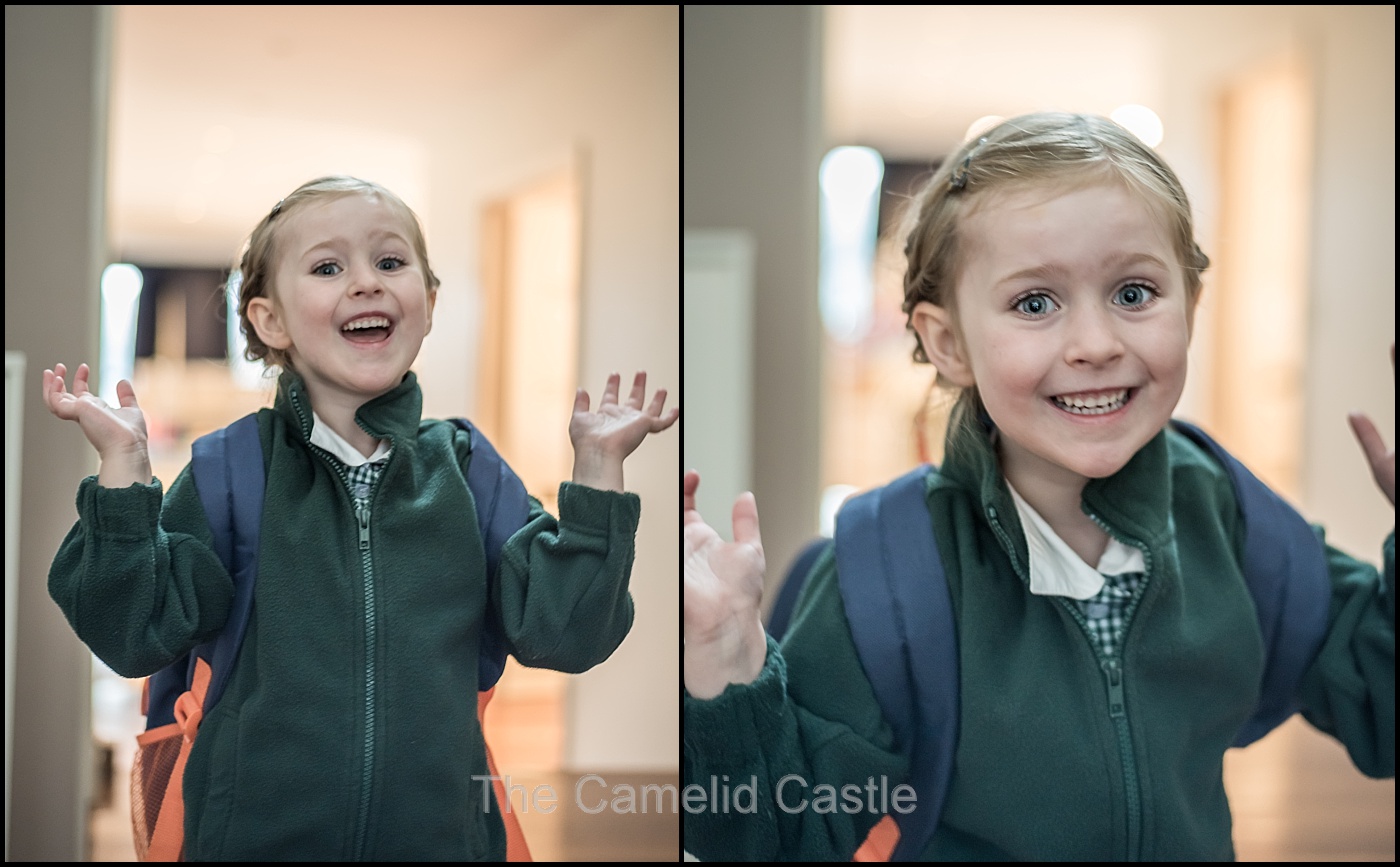 At pick up time she was still buzzing from the excitement of being 5 (and probably the sugar from the cupcakes).  There was time for playing with the mornings loot, and then the arrival of Granny meant more presents, and seemingly a large walking-singing pony….. 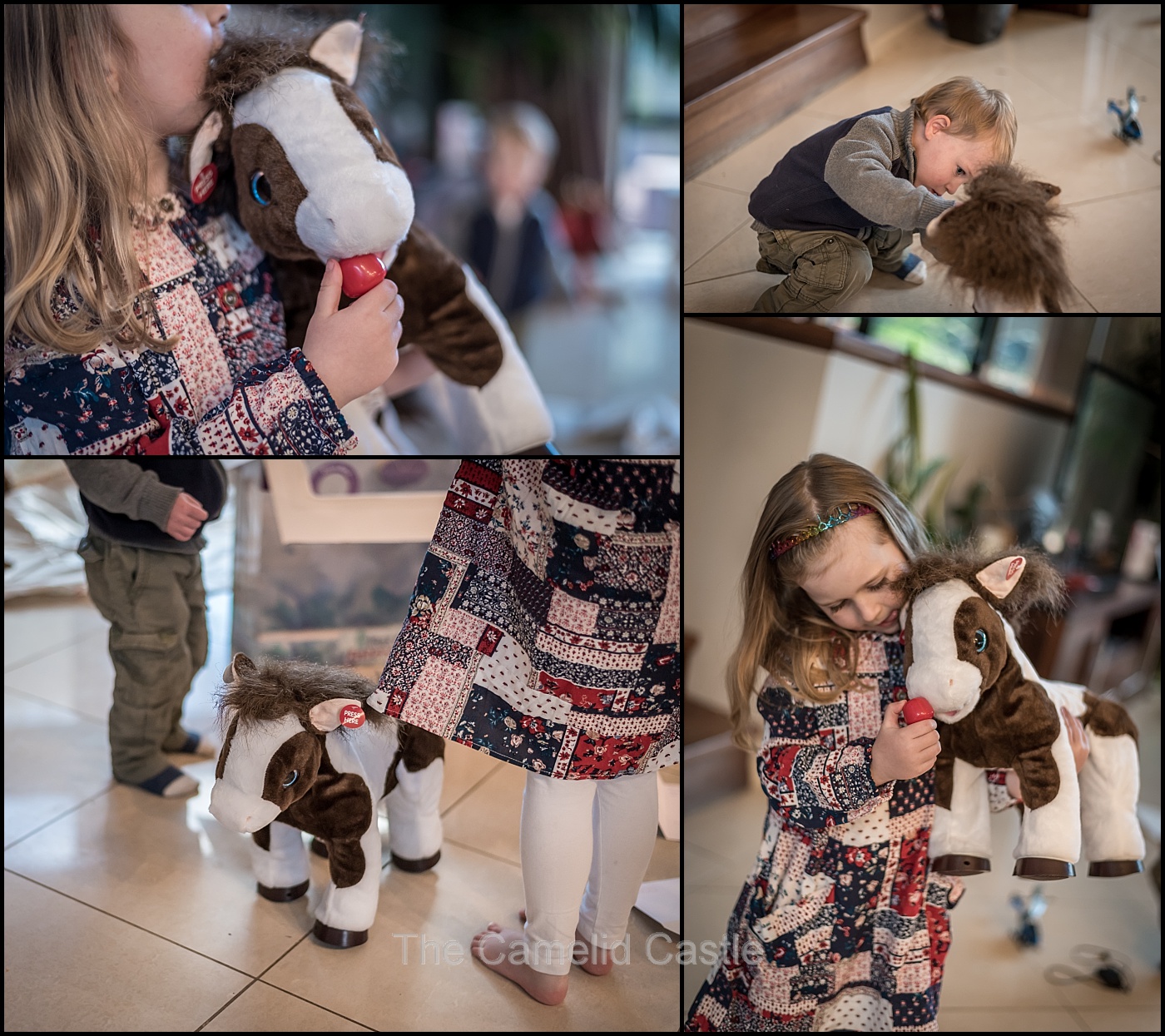 As per tradition, Astrid got to choose her birthday dinner location. She’d picked the Mawson Club for this years birthday – both so she could play in the kids area that both kids love (and the adults love as we can drink wine in peace) and eat schnitzel and chips for dinner.  Her birthday just happened to be on cheap schnitzel night, coincidence?  You can take the girl out of Austria but the love of schnitzel will remain. 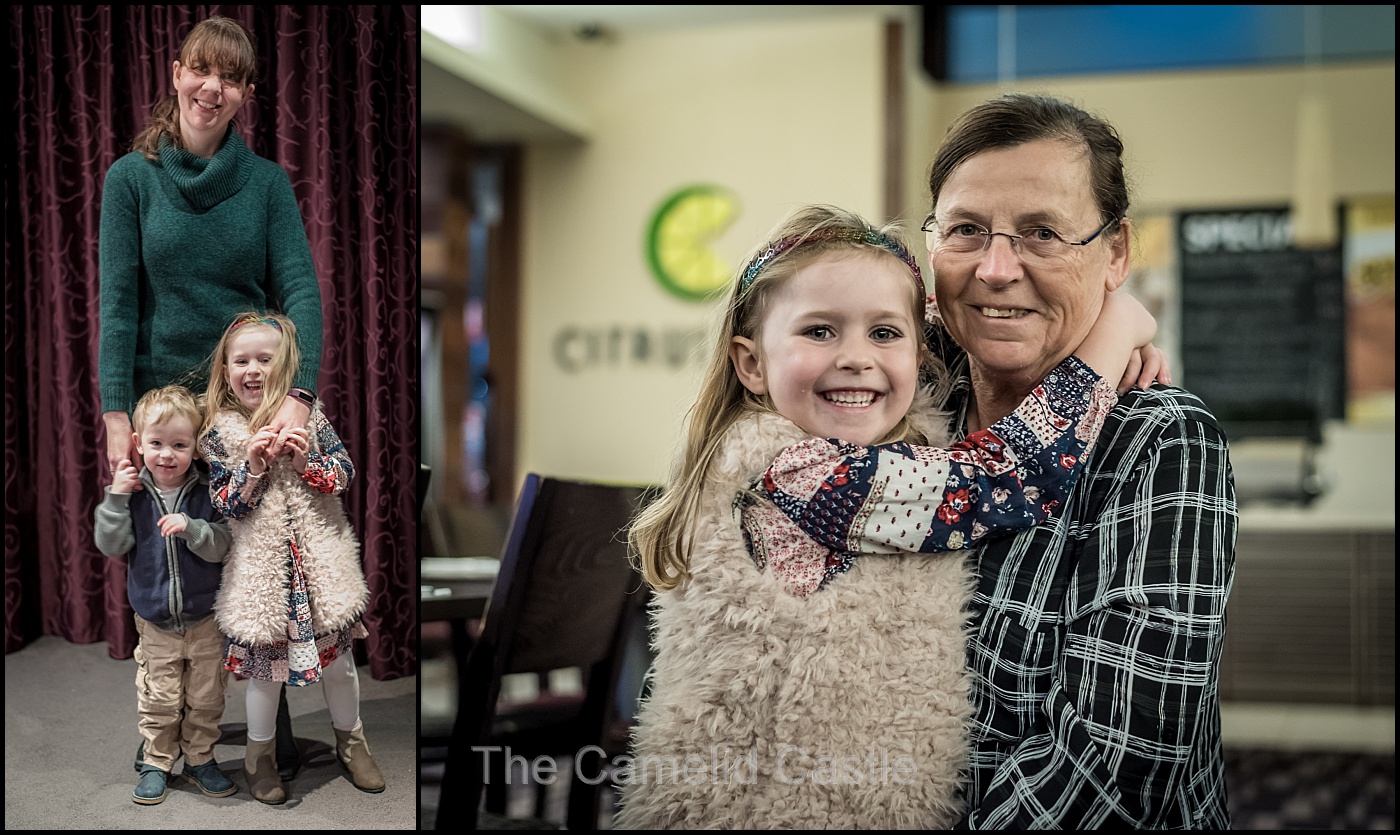 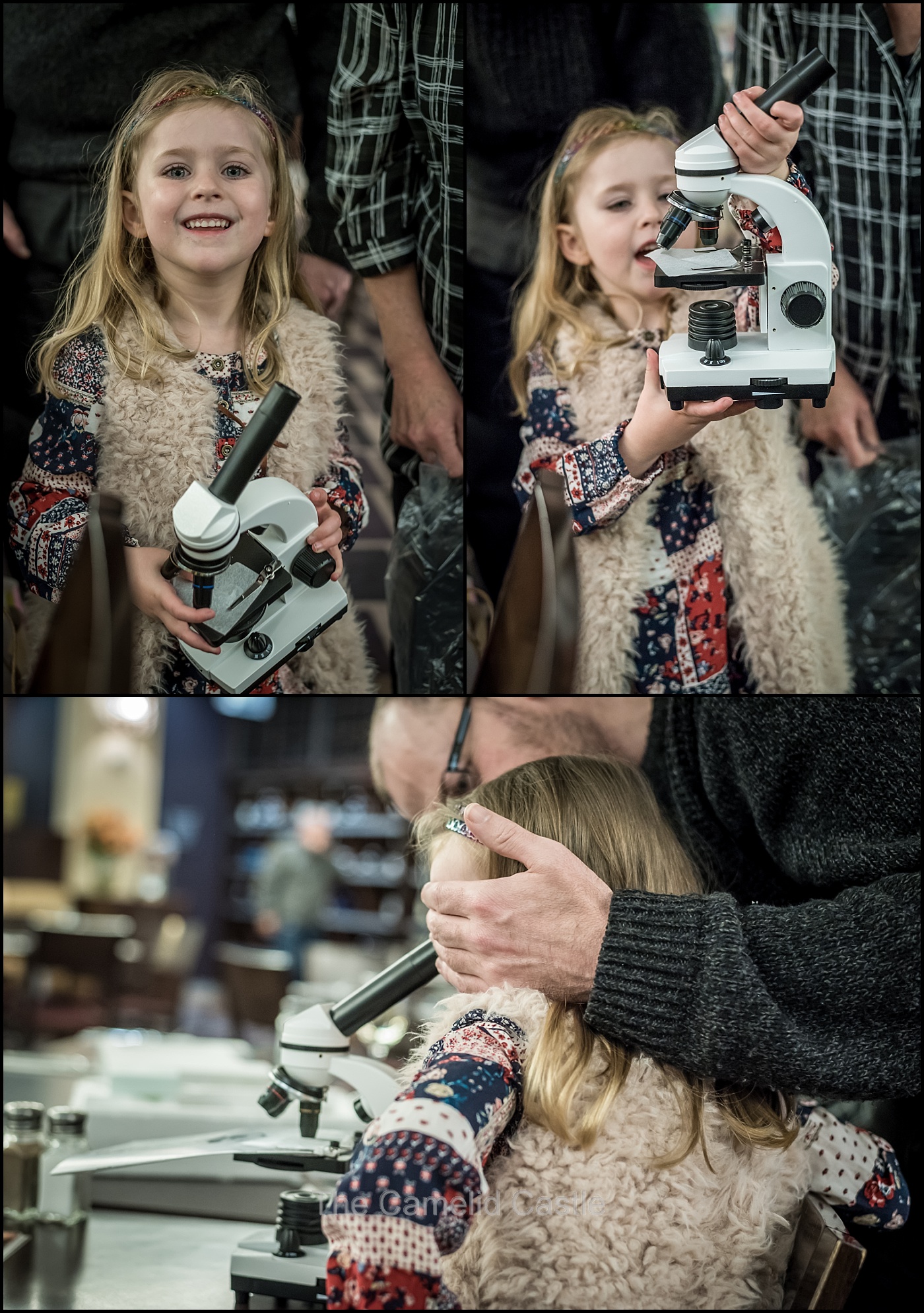 Dinner with family and friends accompanied by more presents, playing and schnitzel was a pretty big hit!  She adored her new microscope (which incidentally is for 8 year olds, but she is 5 going on 18, so it’s quite appropriate).

Full of schniztel and excitement, the first day as a 5 year old was done and dusted! We had all survived, and there was just a mountain of baking, crafting, cleaning and party preparation to get through before the weekends rainbow extravaganza of a birthday party.  Those pictures will be coming up shortly, so get your sunglasses ready, it was bright!