We had been promising Astrid a big party for her 5th birthday (after a quiet affair last year, the 3 years before that she had quite the parties though!).  This is her first year at full-time school and she has a lovely group of friends, and still keeps in contact with lots of friends from outside school.  This meant it was never going to be a small affair, but my theory is the more the merrier!

Astrid had been talking about having a rainbow party for a few months, so rainbow party it was!  While Anto was in Kansas in May, we did a little party planning.  Tip for young-players, a 4-year-old can work out how to use Pinterest in about 2 minutes and she also believes her parents are magical fairies that can make anything she pinned to her ‘rainbow party board’.  Lucky for her the magical fairies were powered by coffee, wine, and psuedo-ephedrine (thanks to yet another cold brought home from school), and managed to pull off most of her wishes.  Nothing like late night icing of cakes, which seems to happen before every birthday party!

Astrid had decided she really wanted a rainbow layer cake, covered in sprinkles, with a rainbow and clouds on top. I did talk her down from the cake that had another entire tier of rainbow layers on top. Now that would just not have been sensible (and would have required me to drink even more coffee and wine). With a mostly clean house and all but the last-minute food and decorating done, we got the monstrosity of a cake filled, leveled and crumb coated before midnight. Yes there was a spirit level involved, but it was perfectly level……….  Anto made sure of that. Doesn’t everyone spend their Friday nights icing cakes and coating strawberries in chocolate and sprinkles?

Finally the big day had arrived, and it was time to turn the house into a festival of rainbows.  It’s pretty easy to decorate with a rainbow theme! 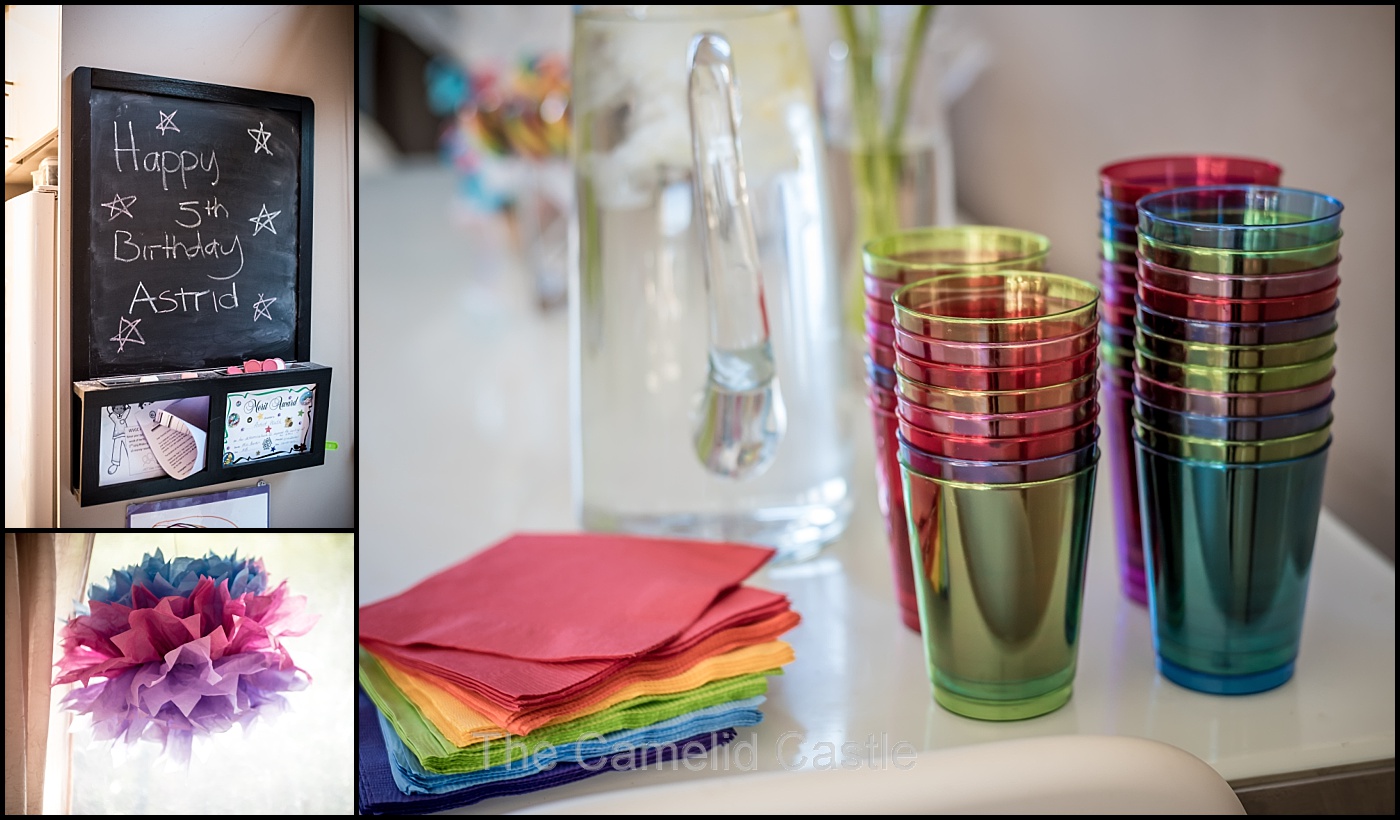 For her party activities, Astrid wanted to do rainbow craft beading, colouring and ‘pin the rainbow on the sun’.  Since craft and colouring are pretty much her favourite things, we thought the other party guests might enjoy them too.  Anto did have a late night making up the poster for the ‘pin the rainbow on the sun’, but it looked pretty good.  Astrid had sorted all the beads for the bracelet necklace making into rainbow colours on her own (a good way to keep your 4-year-old occupied, it would appear)! 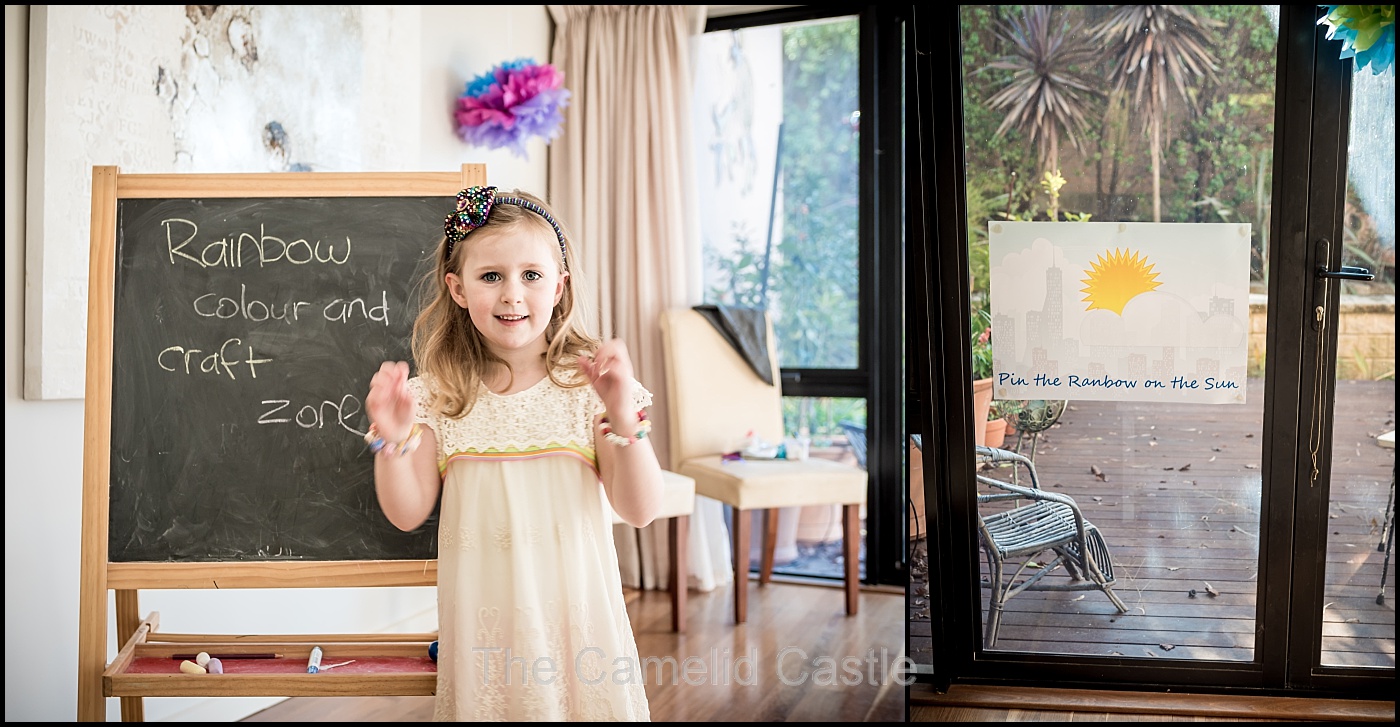 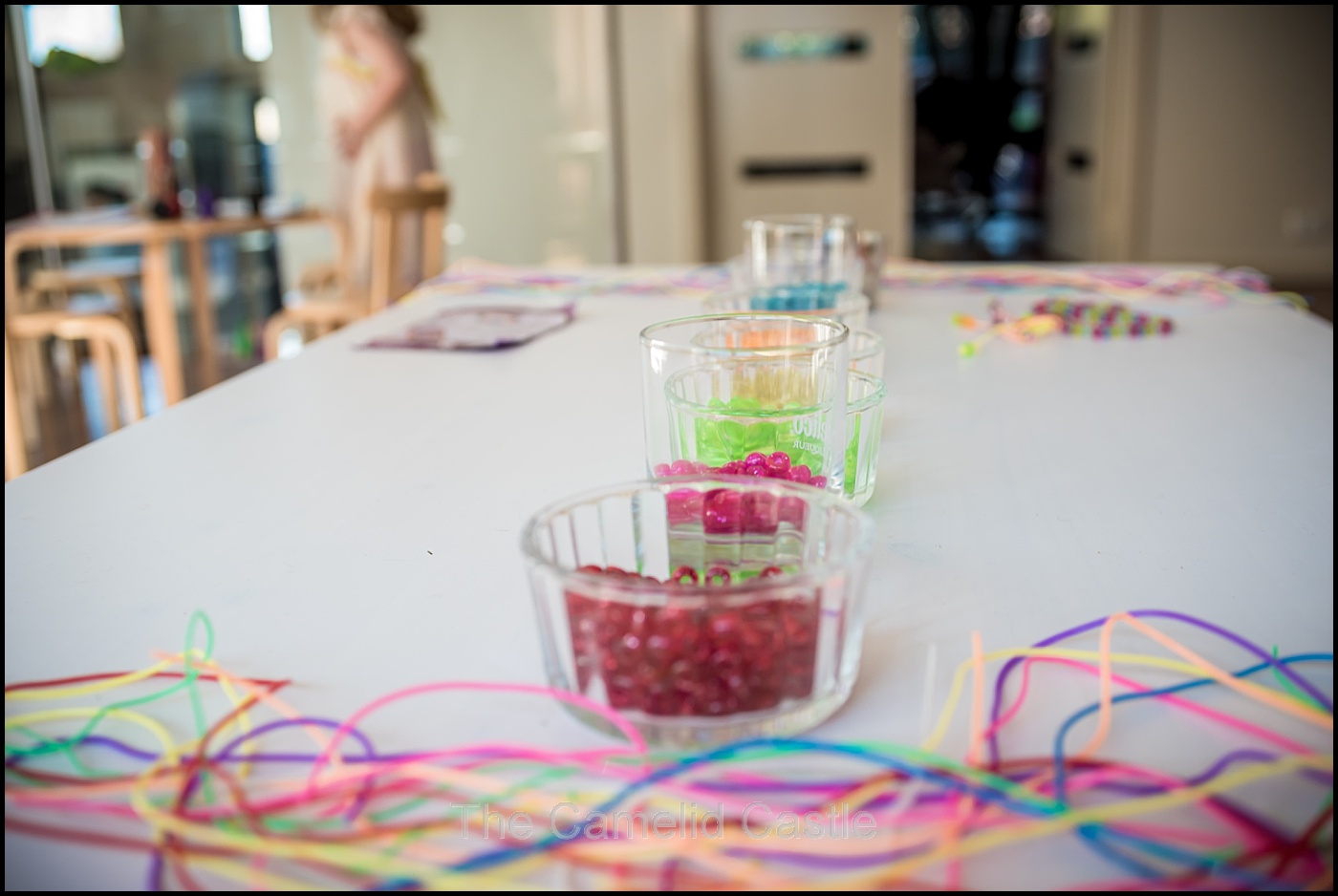 For the party favours, we decided on little bags of chocolate balls, in every colour of the rainbow……along with a rainbow sour strap and some lolly clouds.  There was also a rainbow lollipop to up the sugar and rainbow factor! 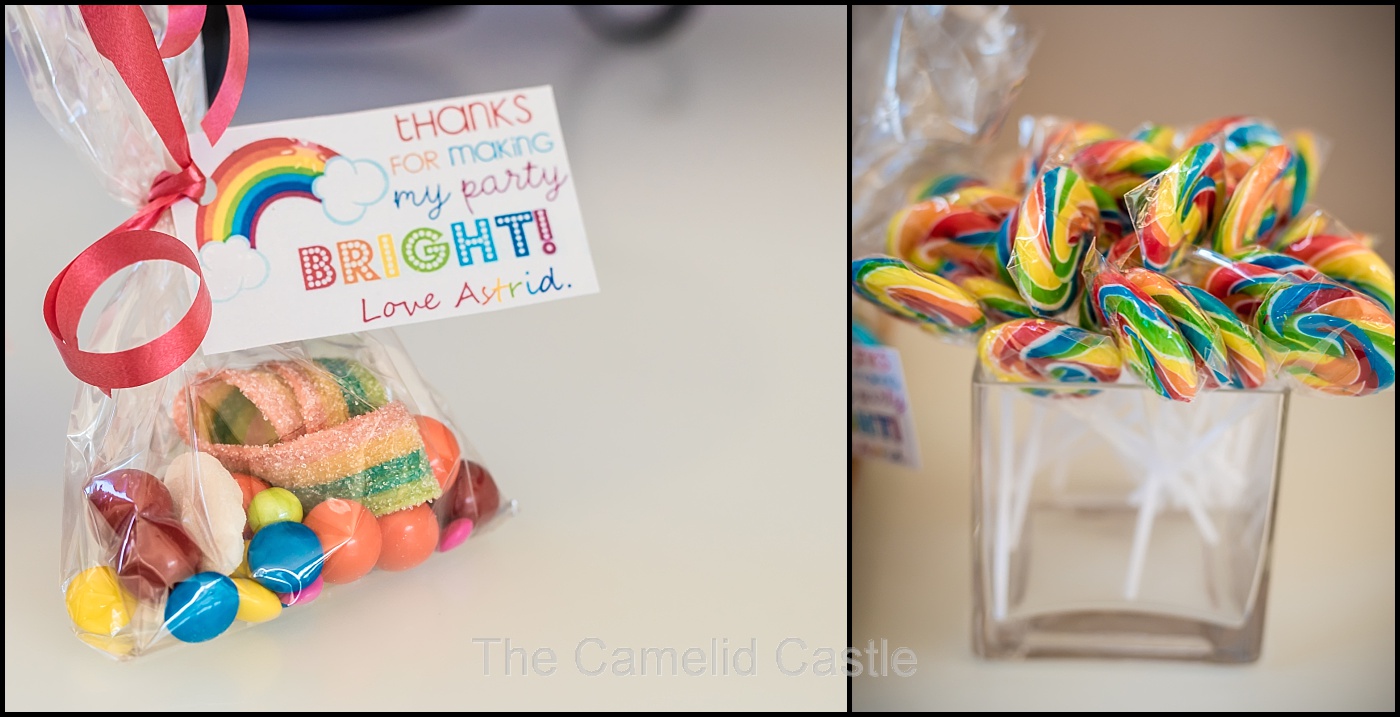 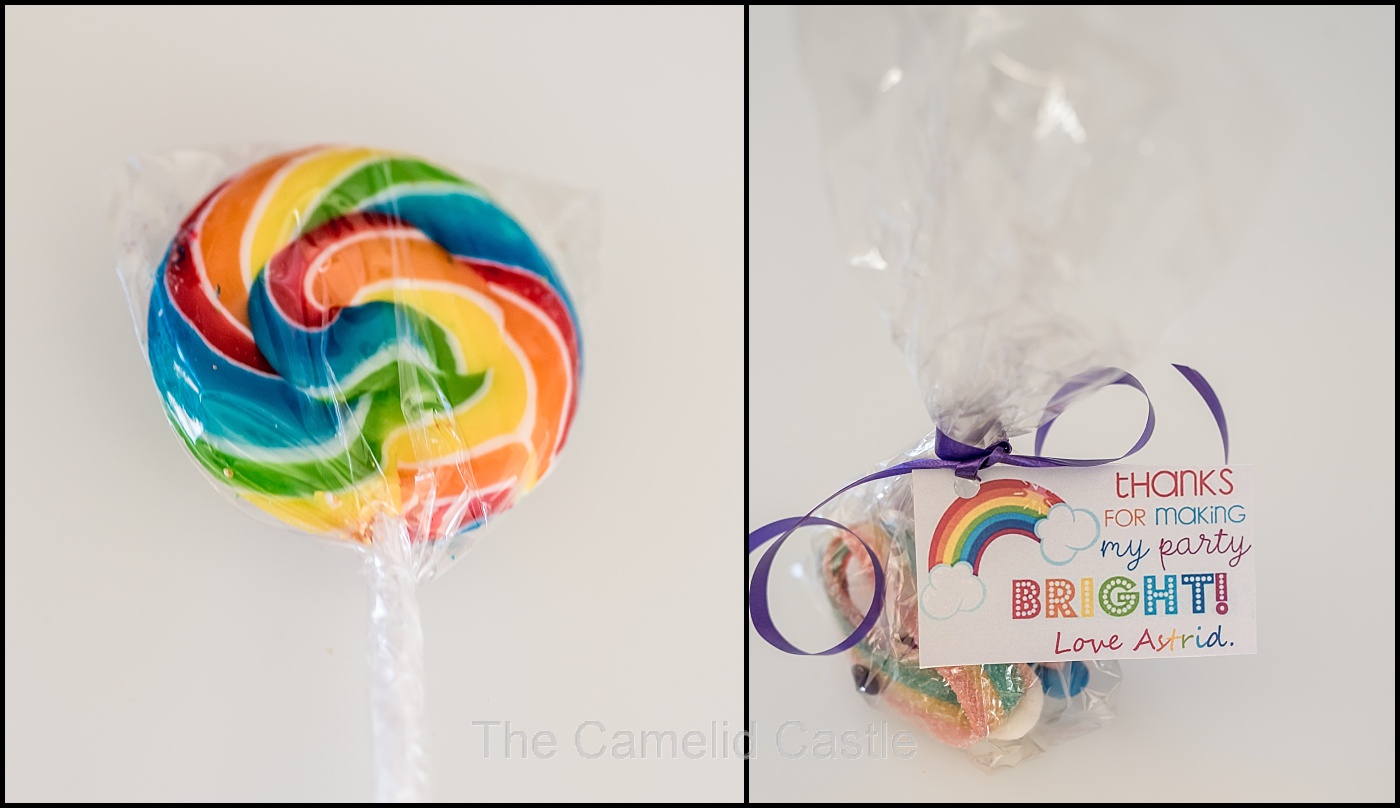 Then it was time to get that cake finished.  Several buckets of butter-cream later and some rolling in sprinkles (that surprisingly involved not too much swearing) and the cake was done.  Our rainbow and clouds added and it was beautiful…….. if we do say so ourselves! 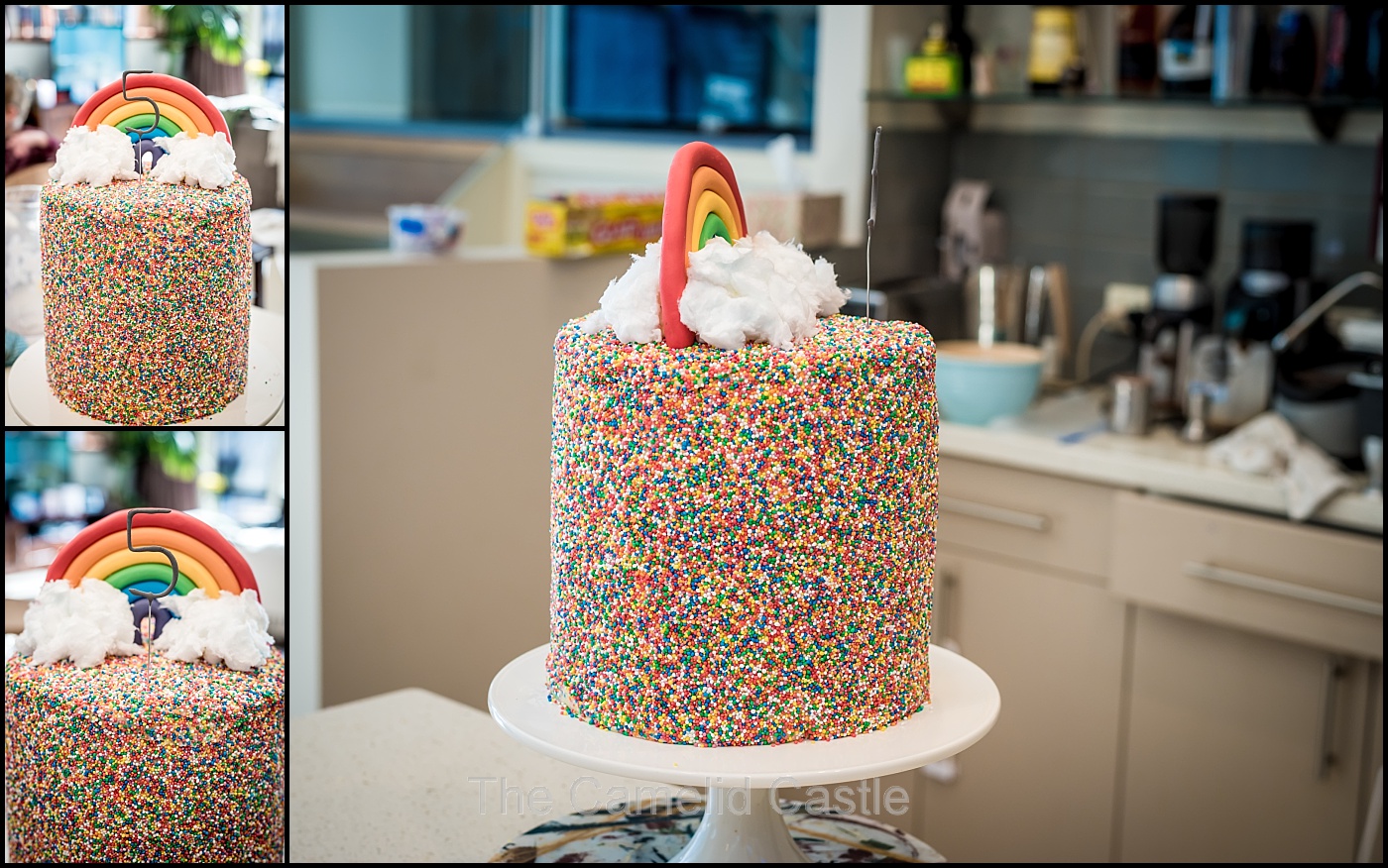 Once the final ribbon was added, it was a rainbow spectacular! Here is the finished product…… 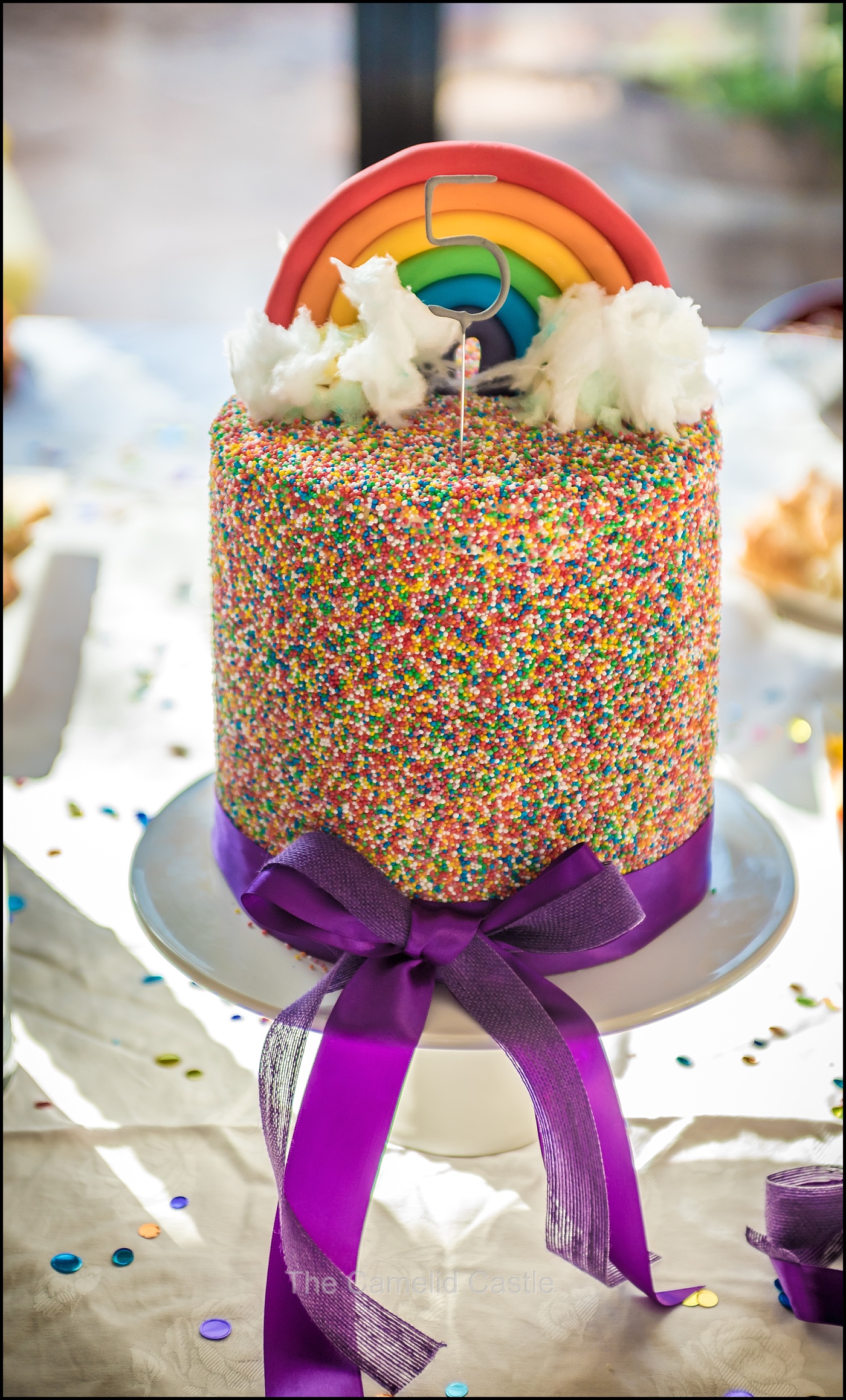 With the cake done it was time to get the party table set up.  We had a lot of brightly coloured food for our rainbow party table.  For the sweet-tooths there were: 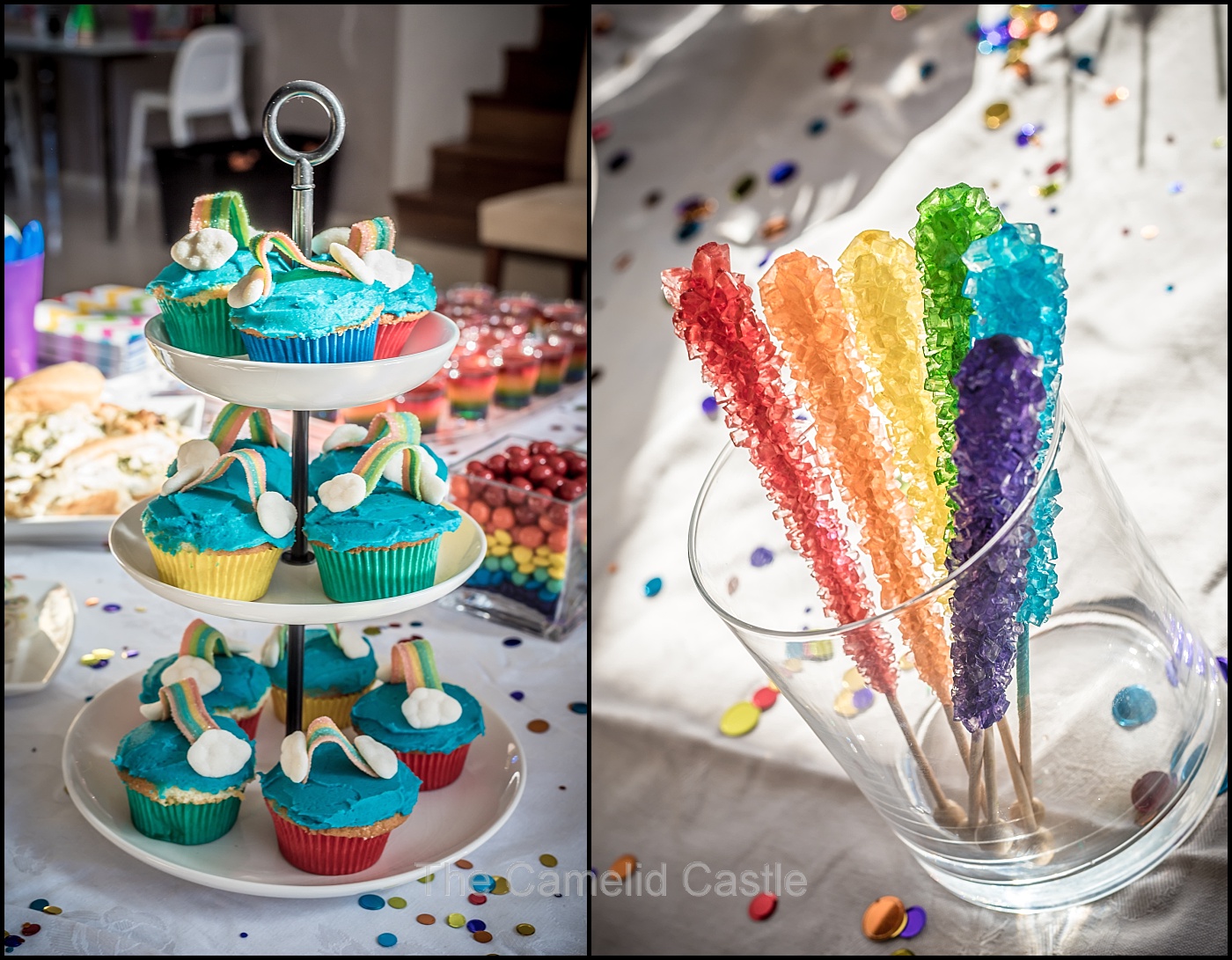 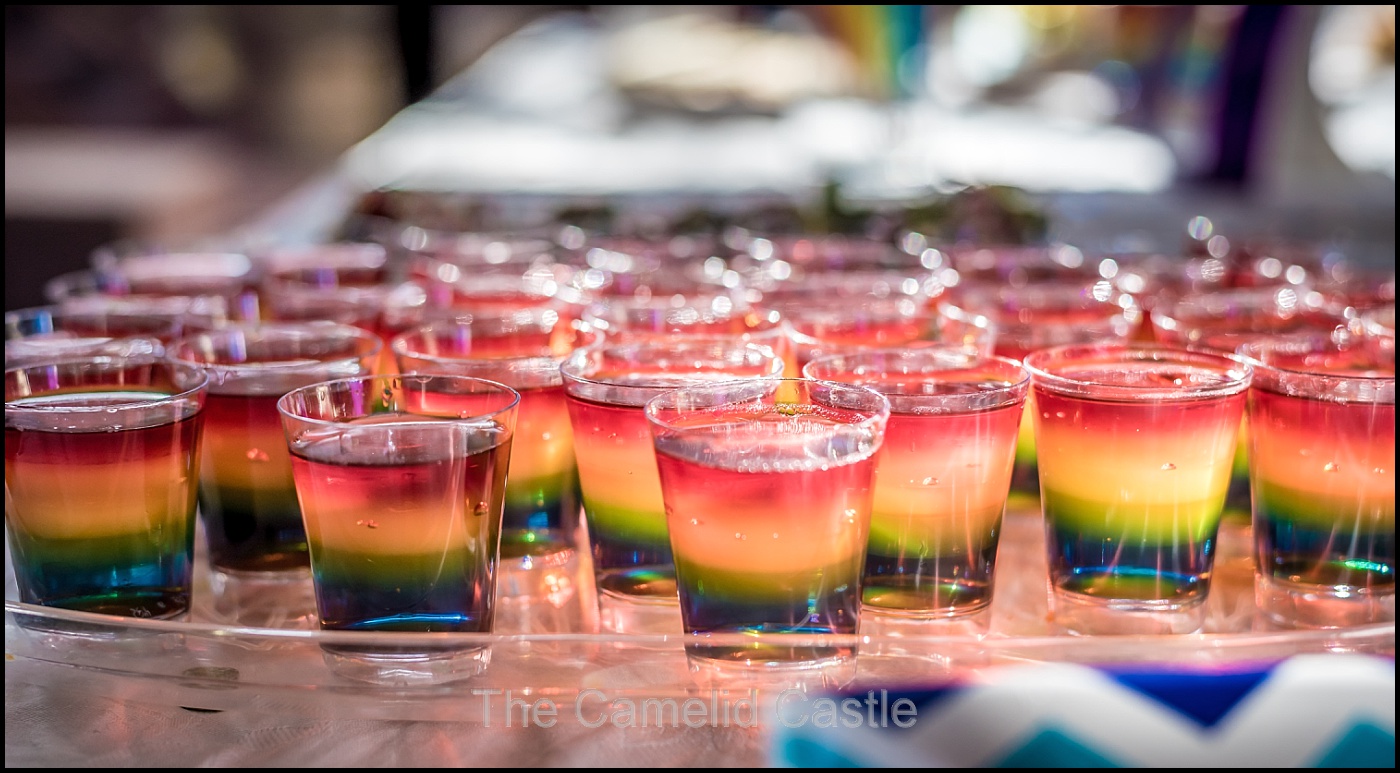 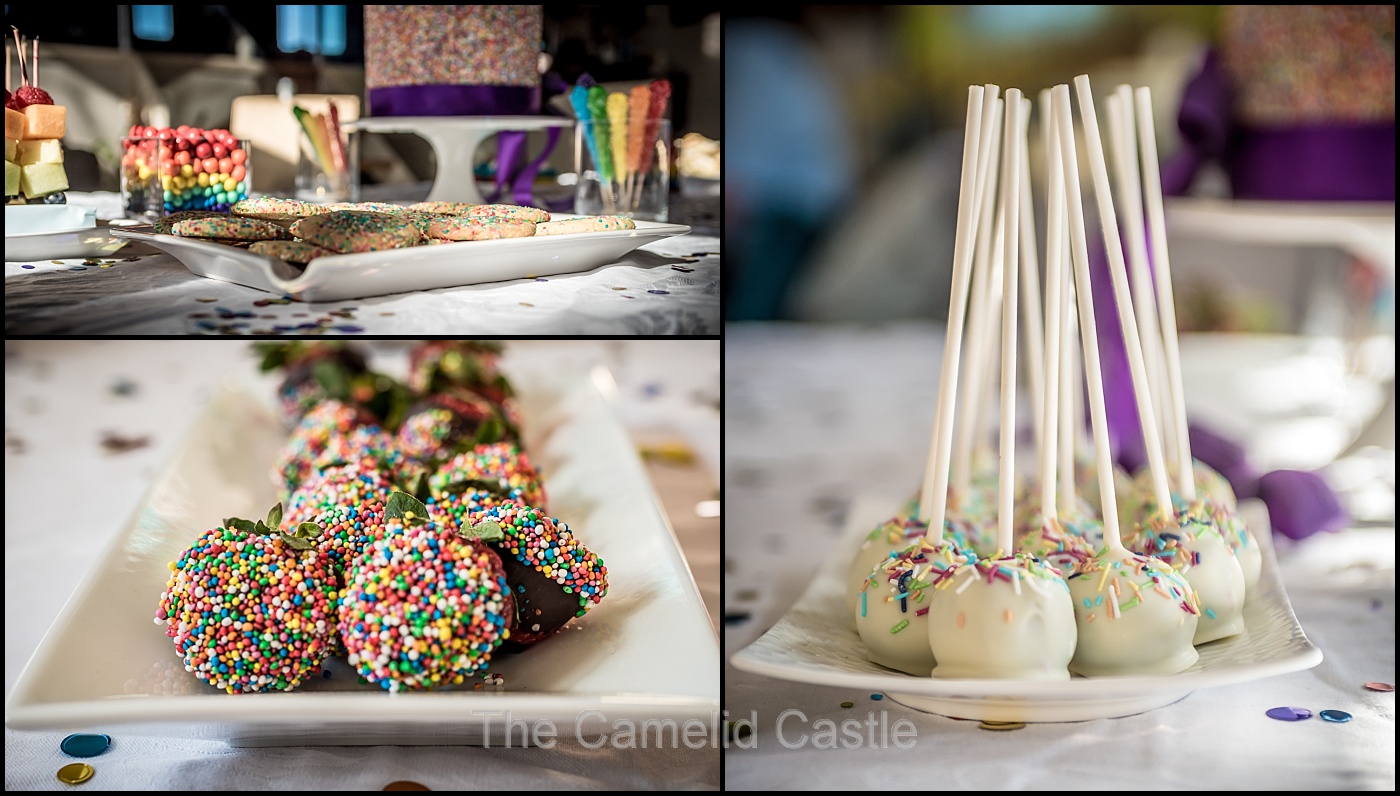 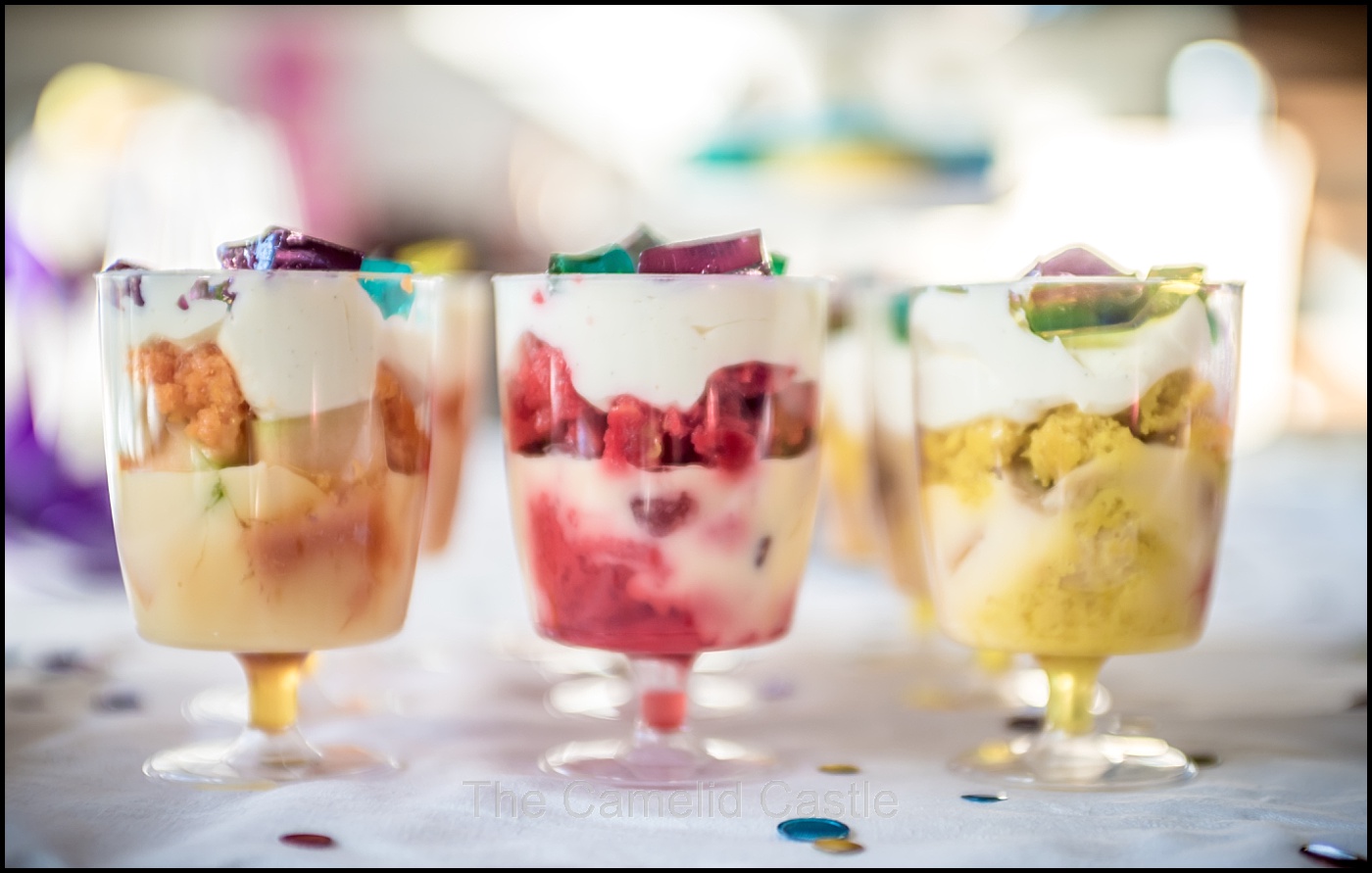 To offset some of the sugar there was some savoury food: 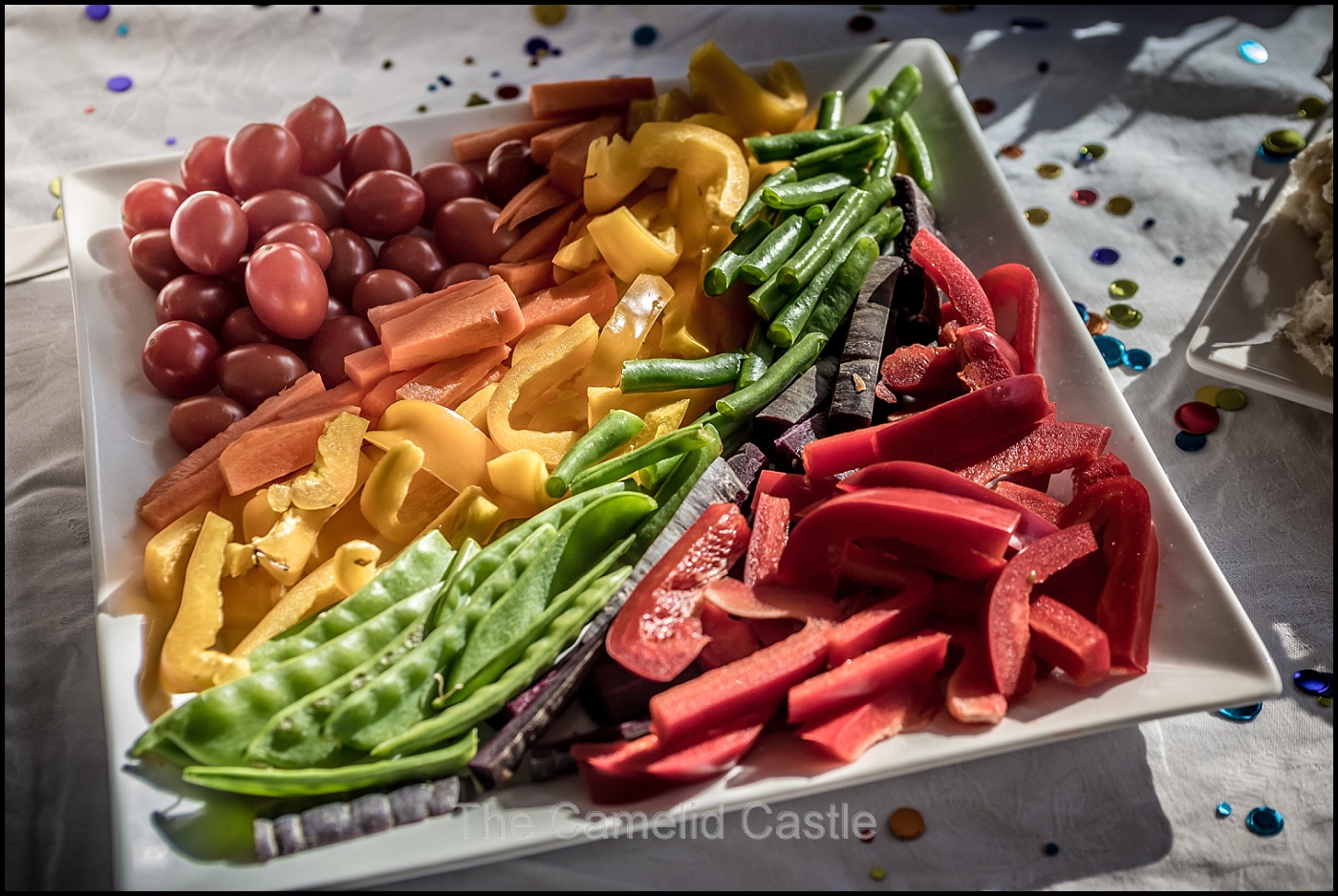 With the addition of the highly-subtle (and miniscule) birthday cake, the table was a sea of colour, and deliciousness…….. 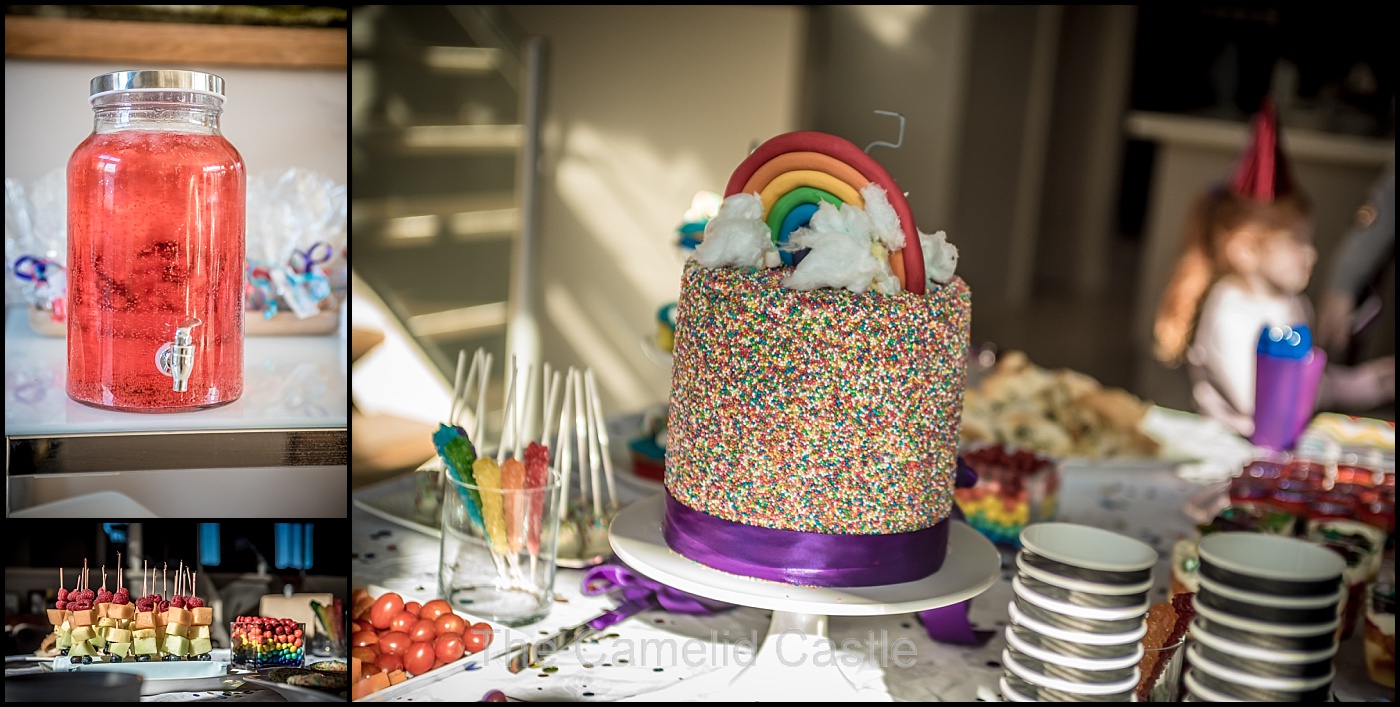 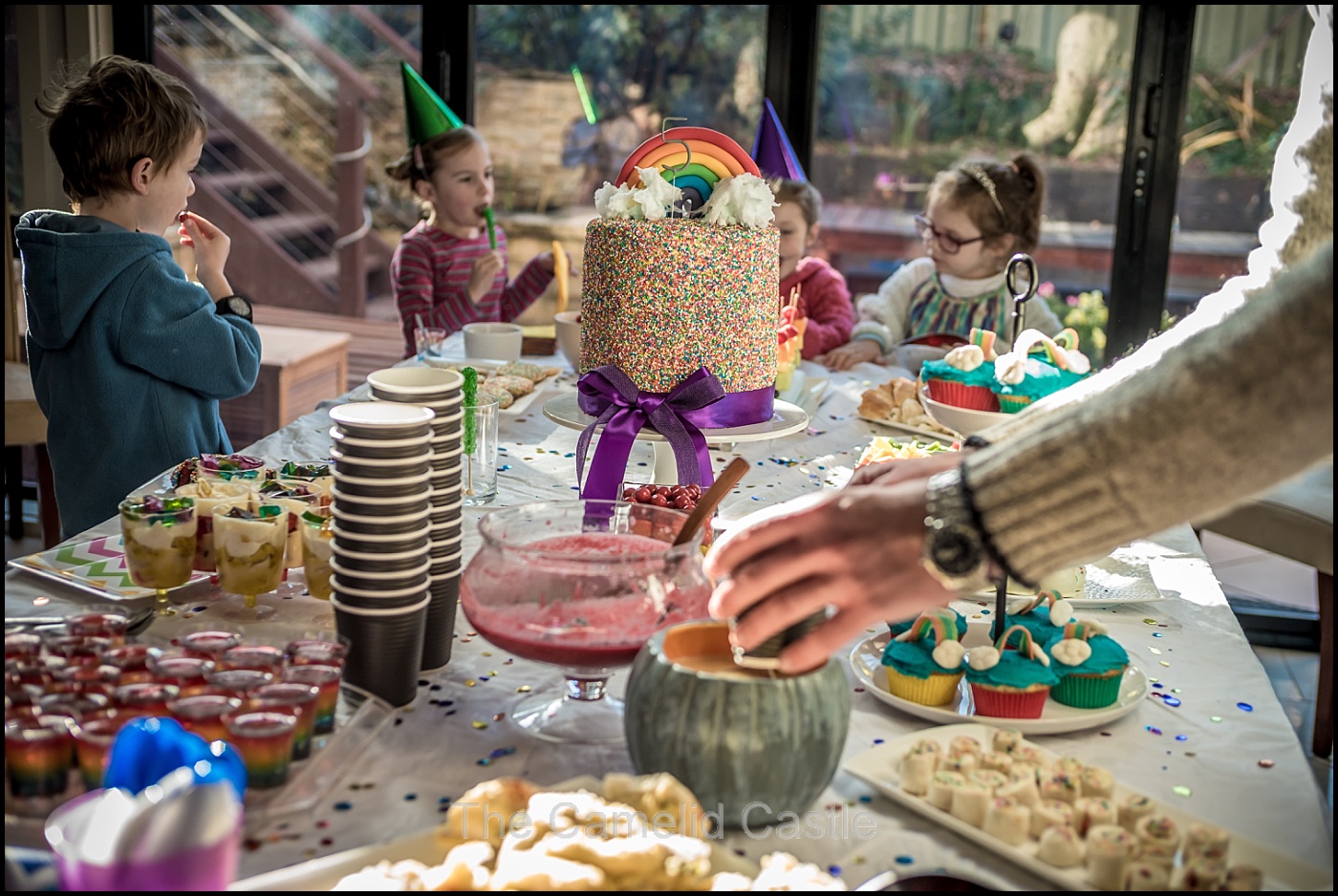 The kids certainly seemed to enjoy the food and drink (and I didn’t hear the adults complaining either!).  There was an immediate assault on the party table, and lots of eating, drinking and plenty of smiles…..

Of course my kids were well and truly in on the sugar-fest! 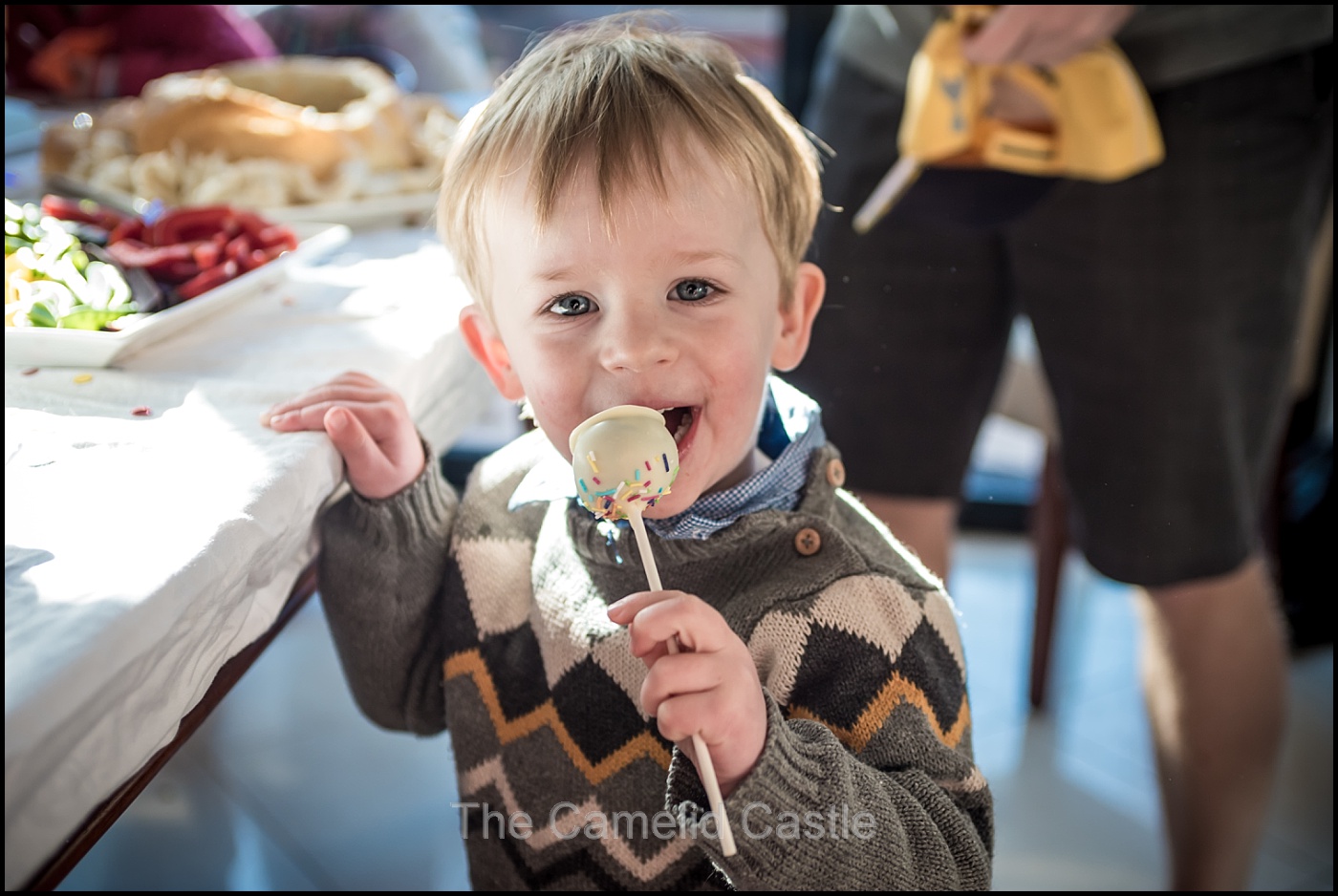 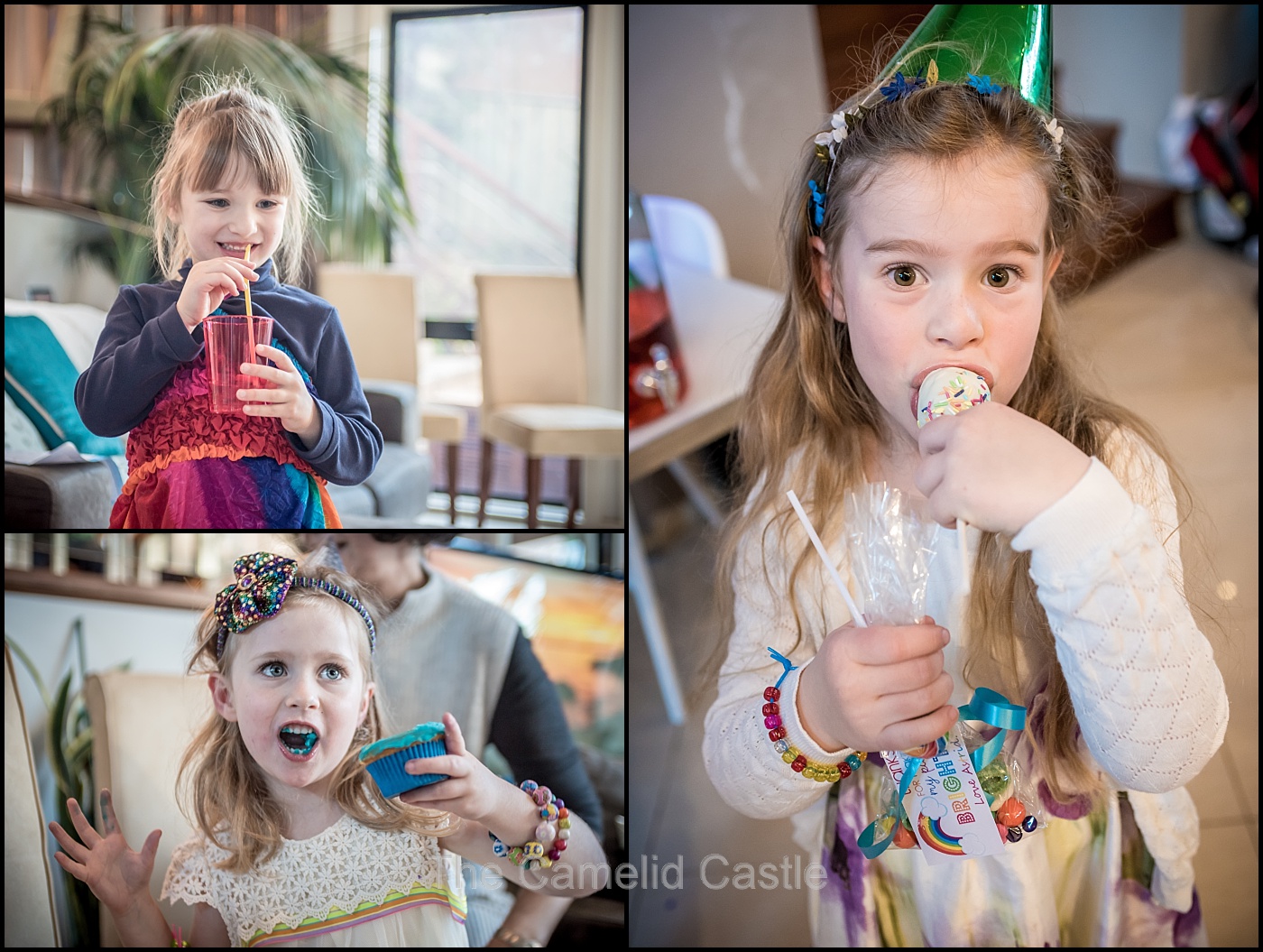 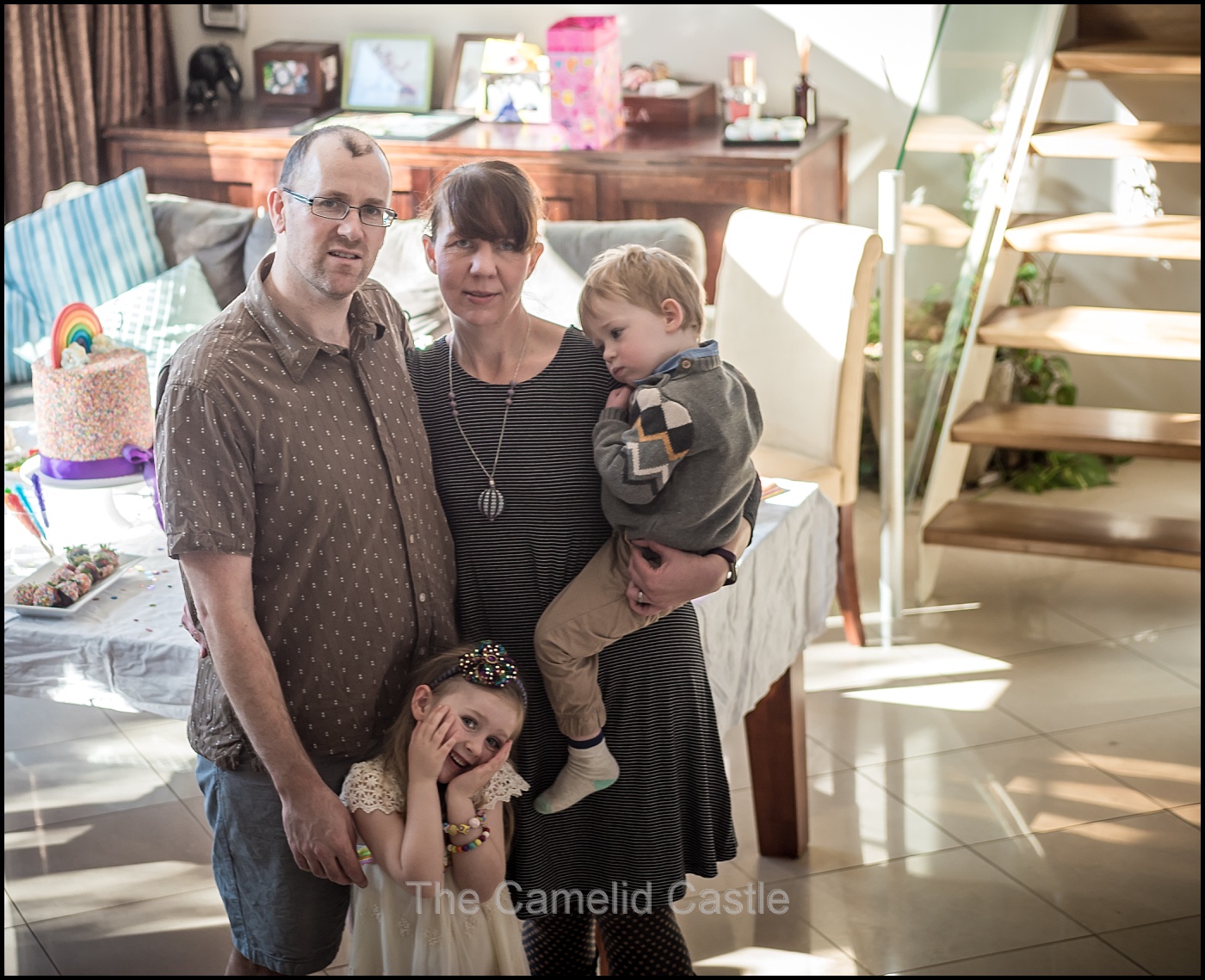 When kids weren’t stuffing their faces with food, the craft and colour zone was very popular! The kids loved the beading in particular, and lots of beautiful creations were made. I spied several of the kids wearing their beads at school this week too…..

Pin the rainbow on the sun was also a popular activity.  The kids did a great job getting their rainbow in the right spot, even if some of them were trying their hardest to see under the blindfold! 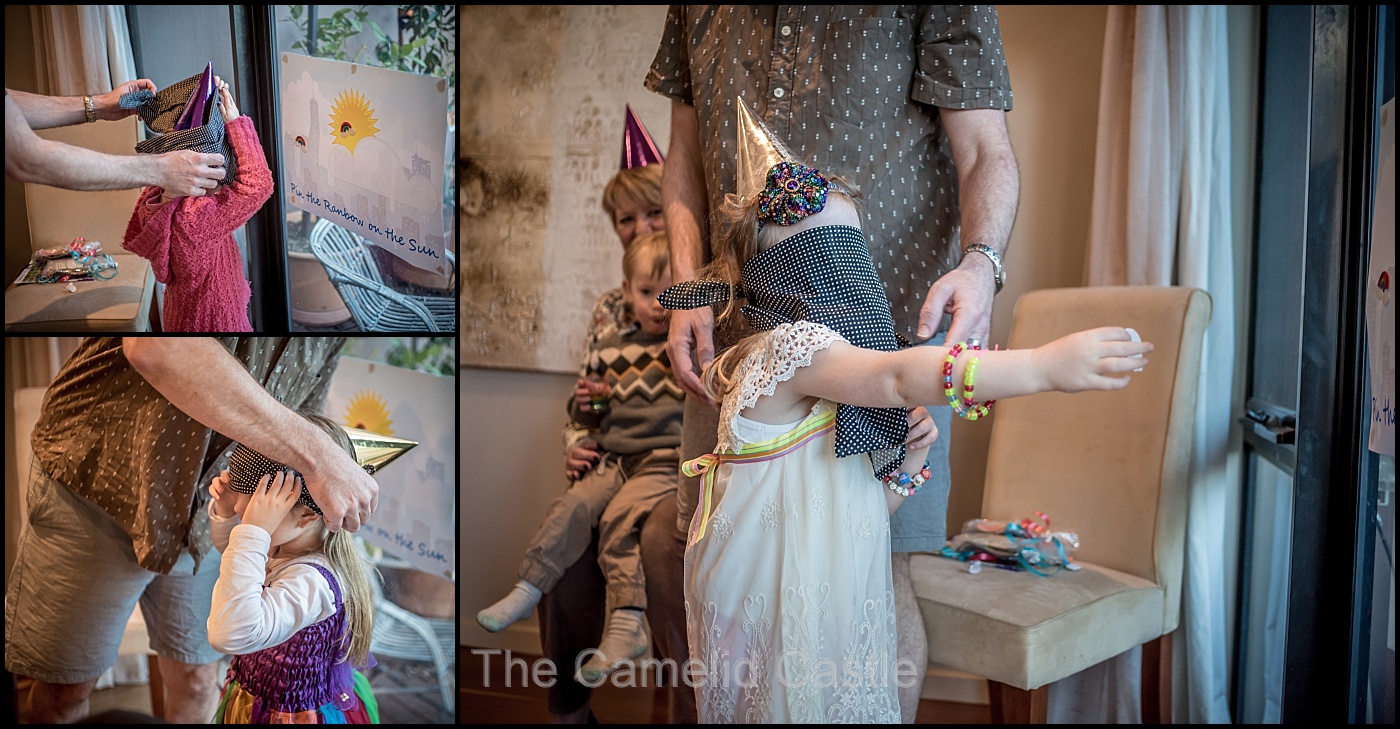 With their fill of crafting and games, it was time to cut the cake. First there was the important task of blowing out the candles and singing ‘happy birthday’!  Astrid is pretty adept at extinguishing candles, but the number 5 sparkler provided a bit of an extra challenge.  Luckily there was an array of other colourful candles to blow out……. 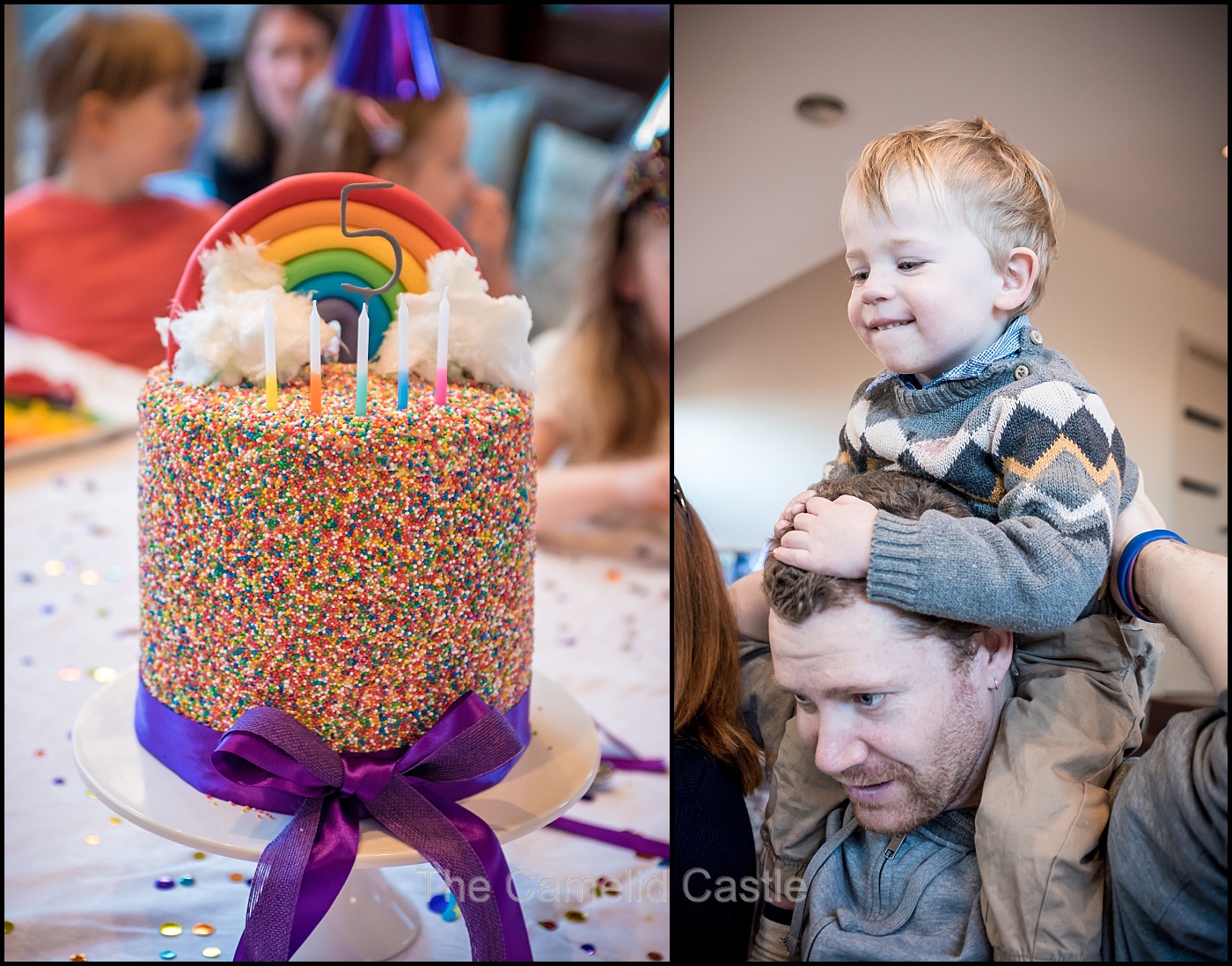 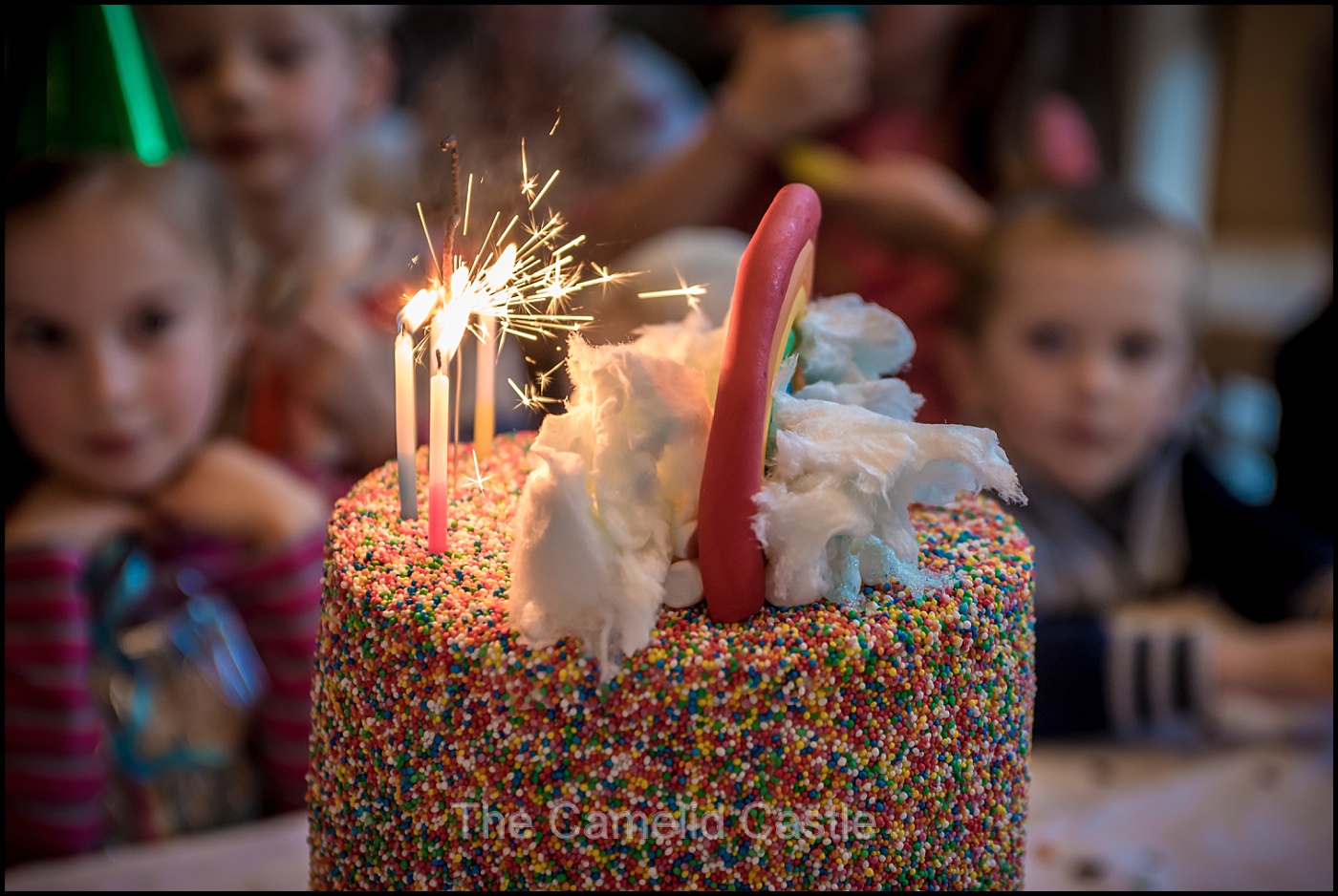 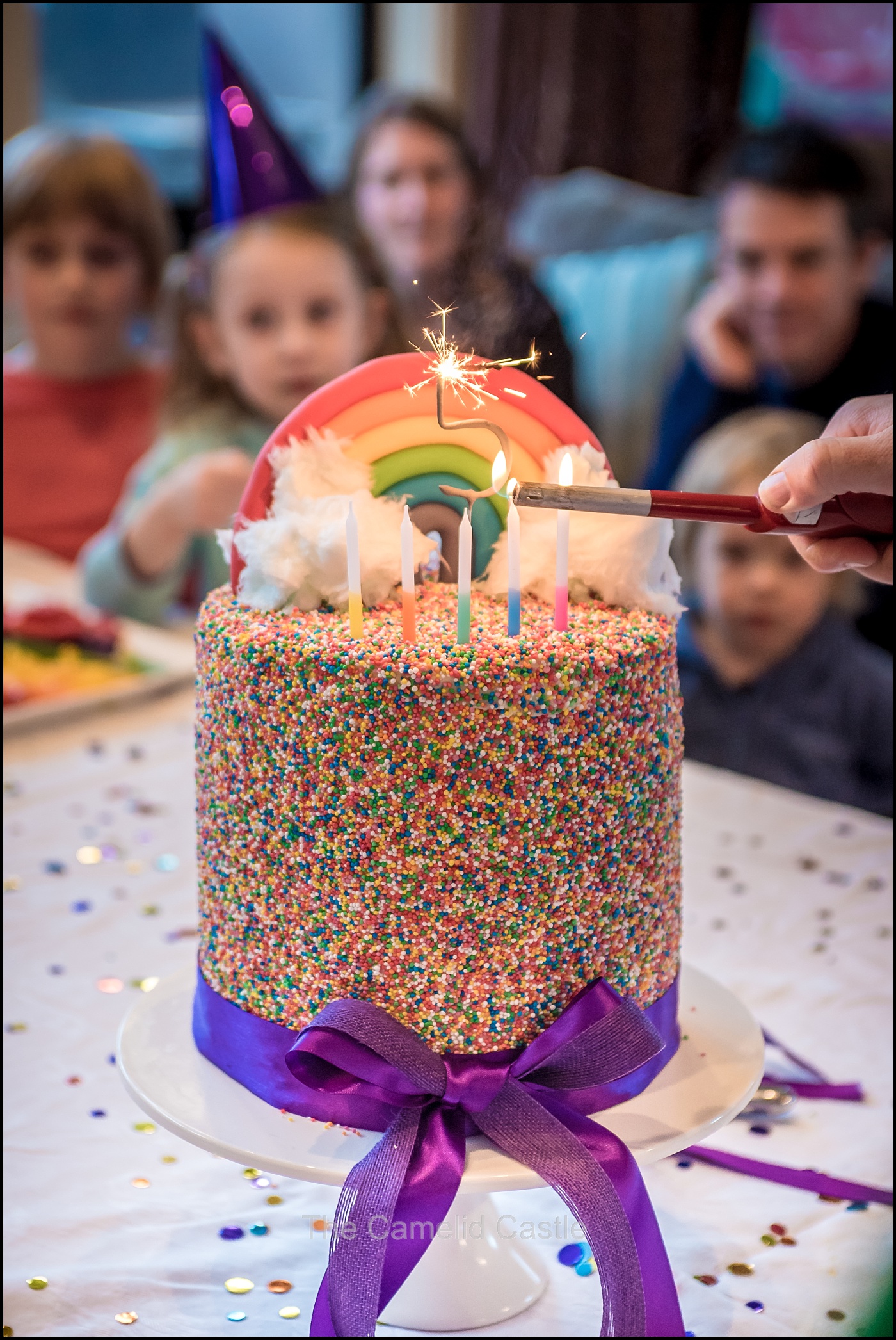 It was almost a shame to cut the masterpiece, but the kids were all excited to see what was inside. I also didn’t want to be left with that much cake!  A few kids had guessed that there might be a rainbow inside, but there was still gasps and applause when the cake was cut to reveal the rainbow goodness…….. 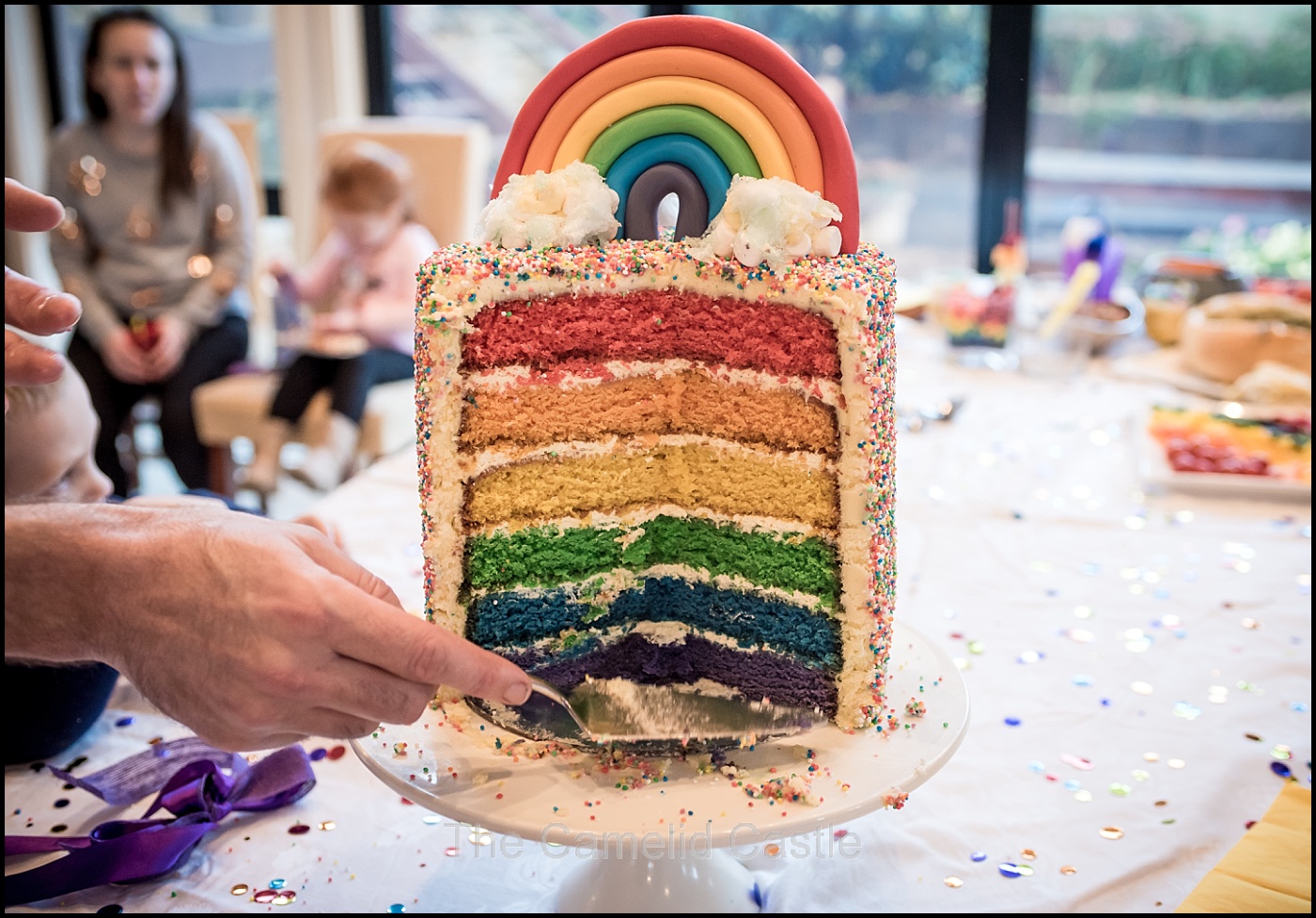 Each of the six layers was a white chocolate buttermilk cake, and they were filled with Chantilly cream and covered in buttercream and sprinkles. It was extremely tasty, which was lucky because there was an awful lot left!  The teachers at Astrid’s school got cake for lunch on Monday……

After 2 hours of fun and festivities it was time for everyone to depart. By all accounts it the guests all had a great time.  I had lots of kids tell me ‘it was the best party ever!’….. that might have been the sugar talking but nonetheless there were plenty of happy munchkins bouncing home.

It was then time to restore the house to some kind of order.  The party aftermath is always a bit special but aside from a mountain of cake and glitter, it wasn’t too bad. 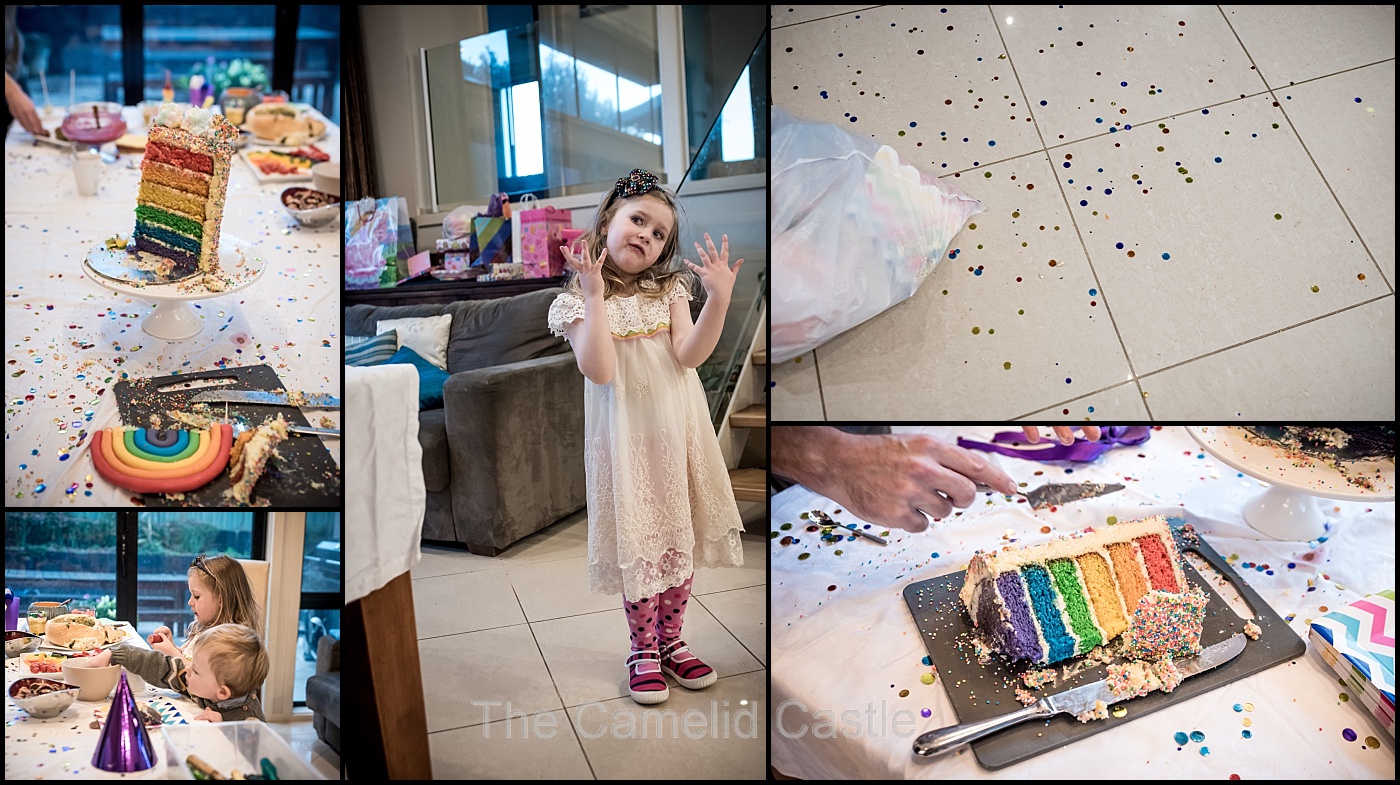 Being mid-Winter it was pretty much dark by the time the party had ended, so we had a little twilight present opening.  The birthday girl was well and truly spoilt.  So many lovely new books, craft items and toys.  We will be having a very craft-filled holidays! 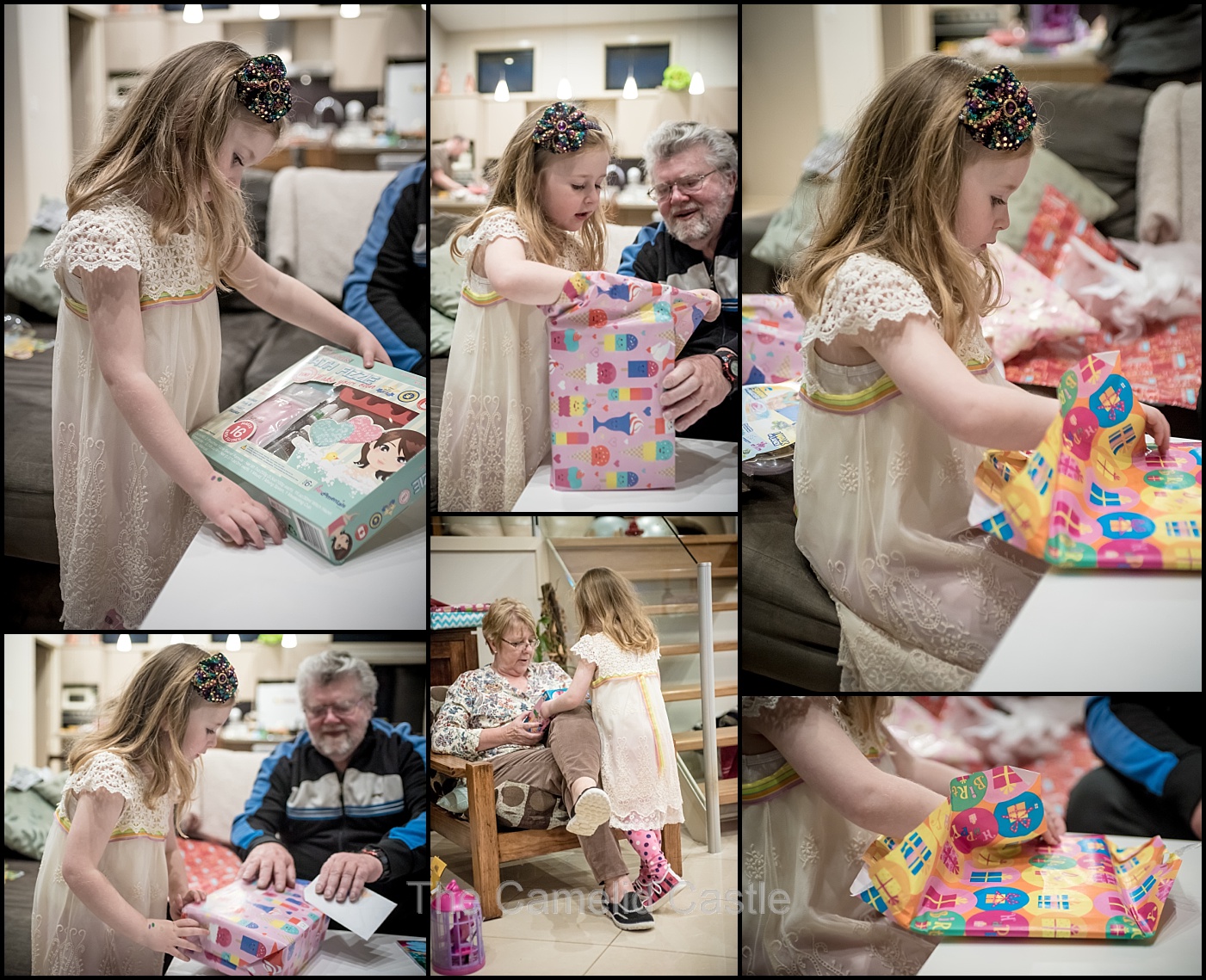 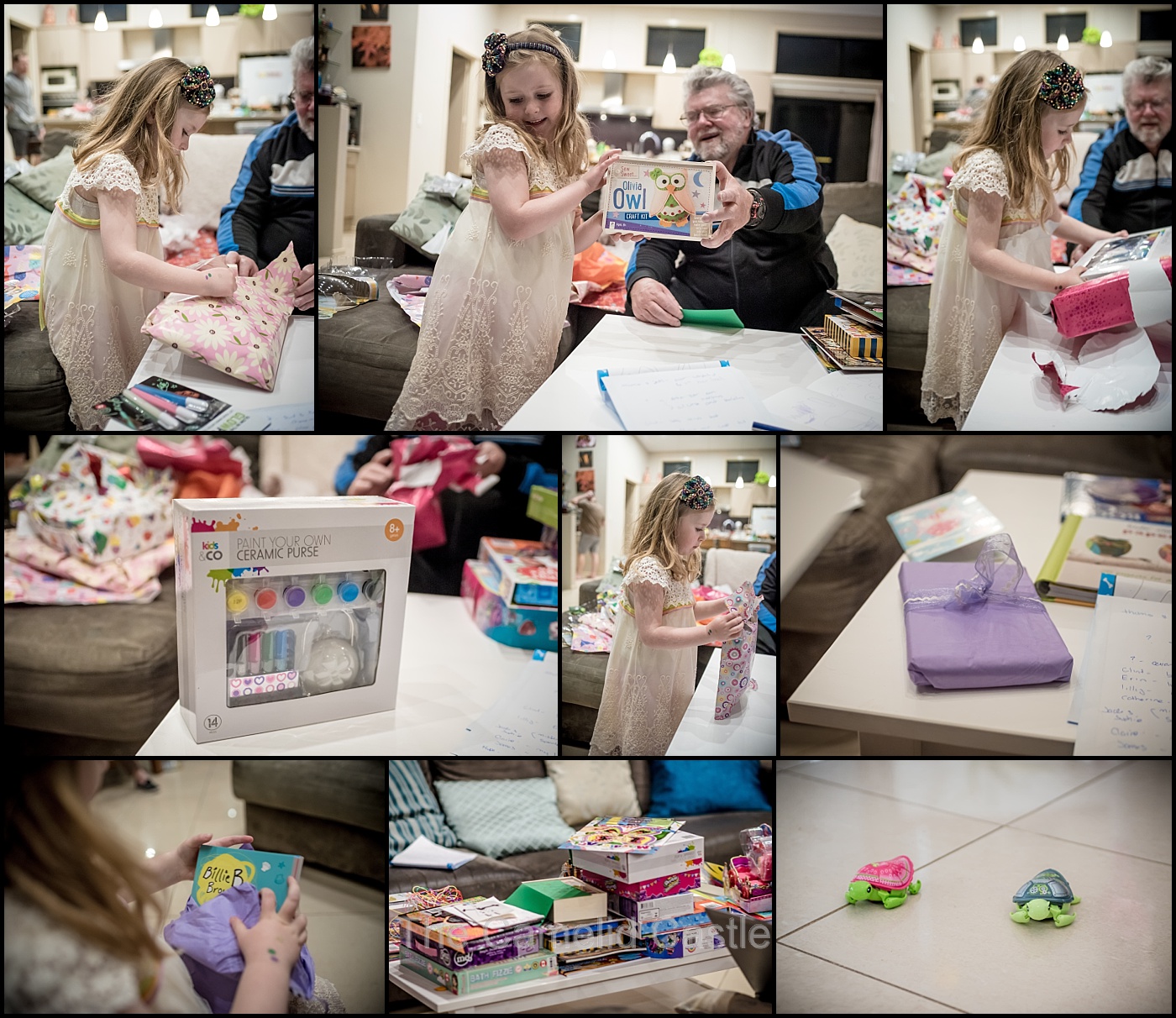 Two very happy and tired went to bed after a huge day, the somehow managed to sleep despite the sugar and excitement!  Anto and I had a bit of a late night cleaning up, not quite as late as the previous night’s cake icing effort, though.  All would have been fine except Anto had a 3.30am wakeup to head to the airport for his next overseas trip.  He probably should have eaten some of the cake to get him going!

The 5th birthday celebrations are now done and dusted!  A big thank you to all those who helped us celebrate, we hope you had as much fun as we did.  Also a huge thanks to those who helped with the party prep and food, especially Granny, Grandma, Grandpa and my friend Jade (who always makes the delicious cake pops).  It’s always a team effort.  Anto will no doubt be banning Astrid from Pinterest before the next party!