We decided on Kangaroo Valley for our quick school holiday getaway.  We love the area and it’s close to Canberra. We happened to find a wonderful place to stay for 2 nights, Wombat Hill B&B Cottage.  It not only had the most amazing gardens, but chickens, dogs, sheep and alpacas!  Yes, despite having their own backyard alpacas the kids were very excited by the alpacas…..

I posted previously about our trip to Fitzroy Falls on the way into Kangaroo Valley.  After leaving the falls it was only a relatively short drive through the tiny town of Kangaroo Valley and up the spectacular, but very windy, Berry mountain.  Wombat Hill pretty much half way between Kangaroo Valley and Berry. It’s a very scenic (but twisty) drive up.

We arrived mid-afternoon and spent the rest of the day exploring the wonderful gardens and playing with the resident animals.  We picked this particular B&B as we knew it was lovely staying up the mountain and away from the towns.  We also knew the kids would love all the animals!  Wombat cottage apparently has an echidna and wombat who are often sighted in the gardens. During our stay we didn’t manage to find either (much to the kids annoyance) but you can’t control wild animals.  They had apparently been spotted earlier in week………  we just didn’t luck out.

The lack of an echidna and wombat was more than made up for by the kids being able to collect eggs from the chickens and generally follow them around the gardens. 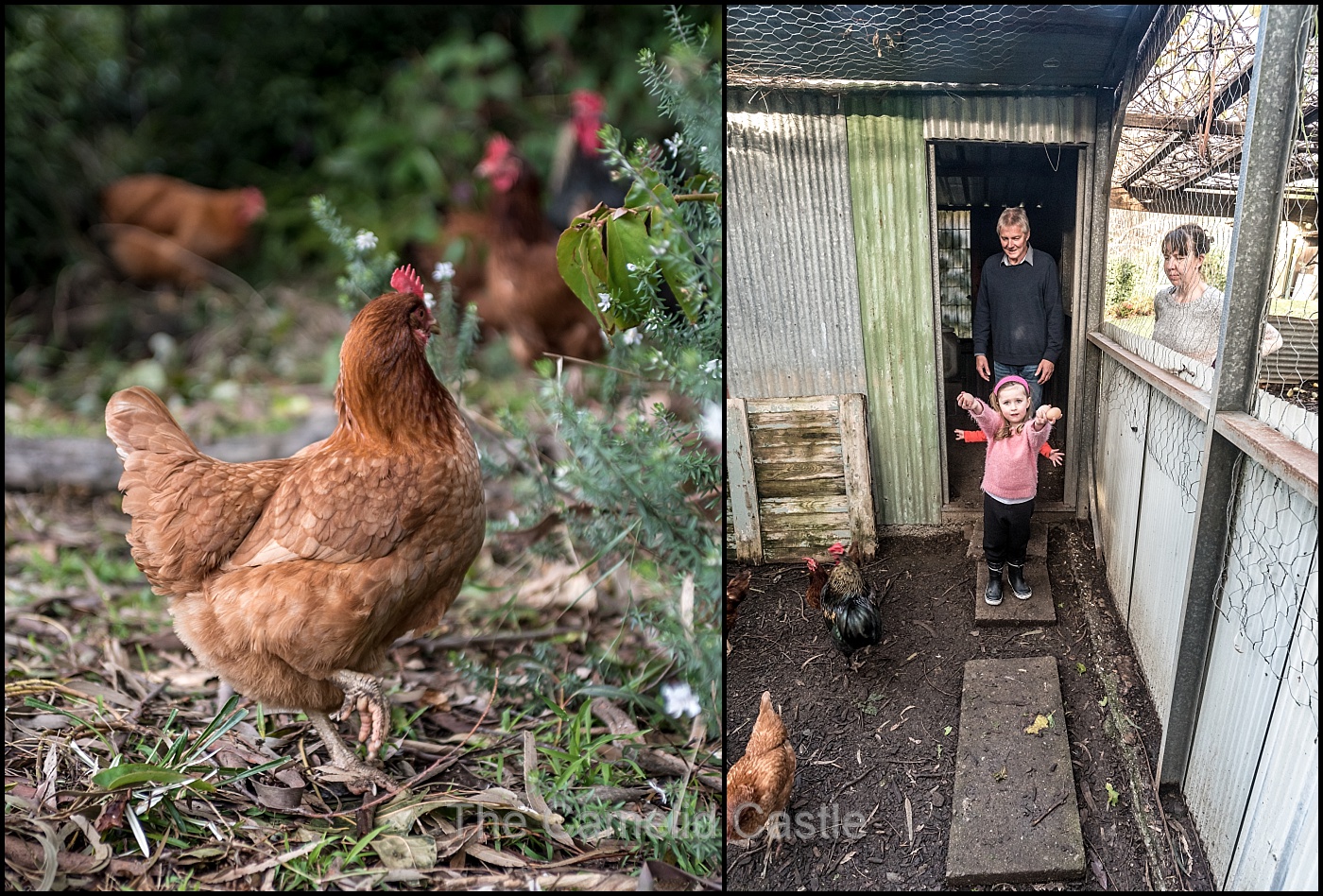 We also got to pay several visits to the alpacas and geese. While they are technically on the neighbours property you are allowed to visit through a gate in gardens.  The alpacas were not quite as keen to play with us, as our own alpacas, but were friendly enough.  They did have their own little flock of geese that followed them around (by little I mean in number, the geese were quite large!). 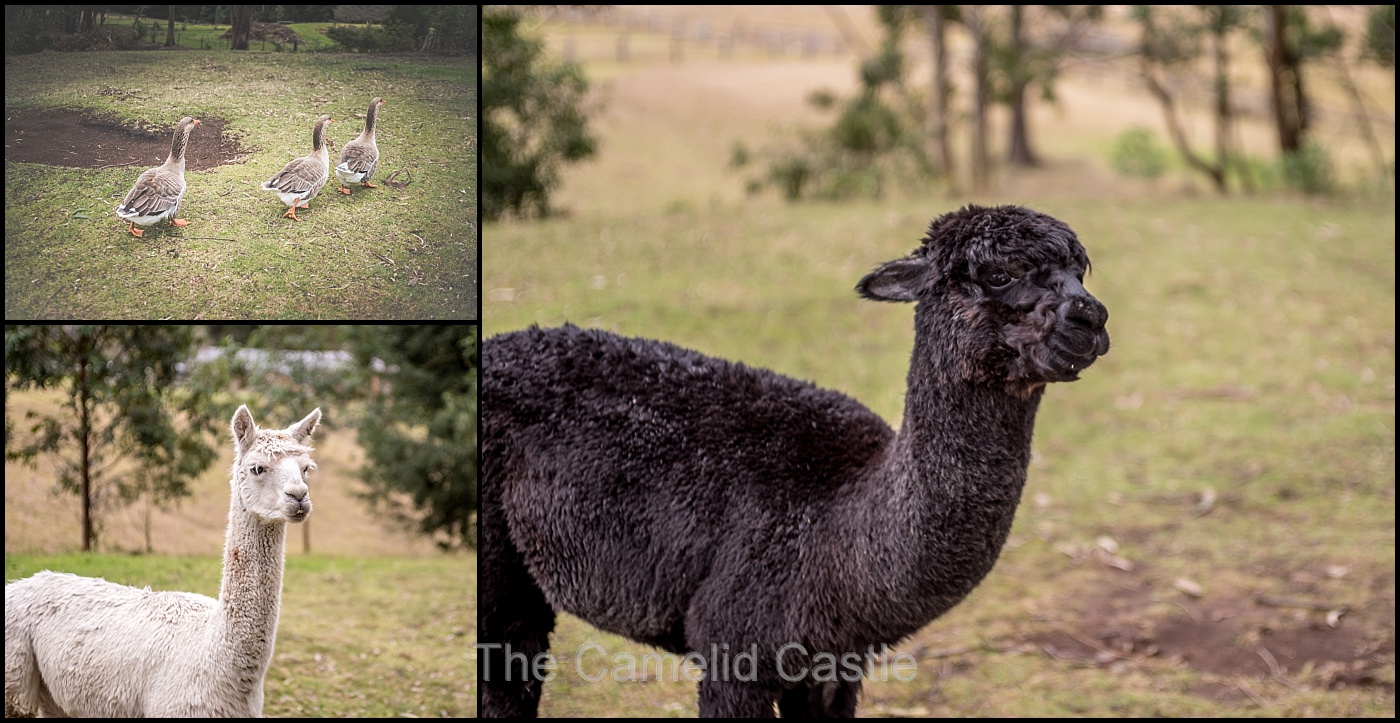 The standout attraction though, were the sheep.  The sheep lived in the bottom paddocks and you were allowed to hand feed them daily.  They were extremely friendly sheep, who came bounding up every time they saw us coming. 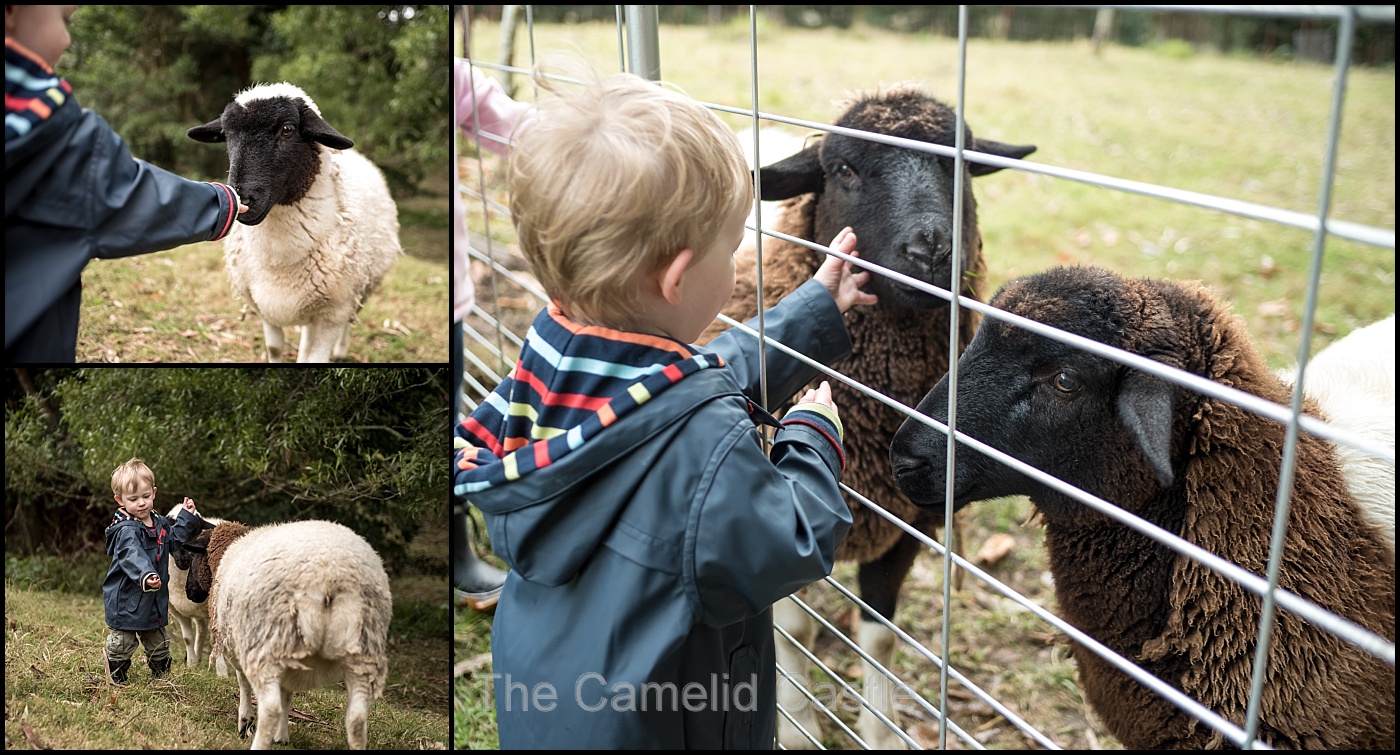 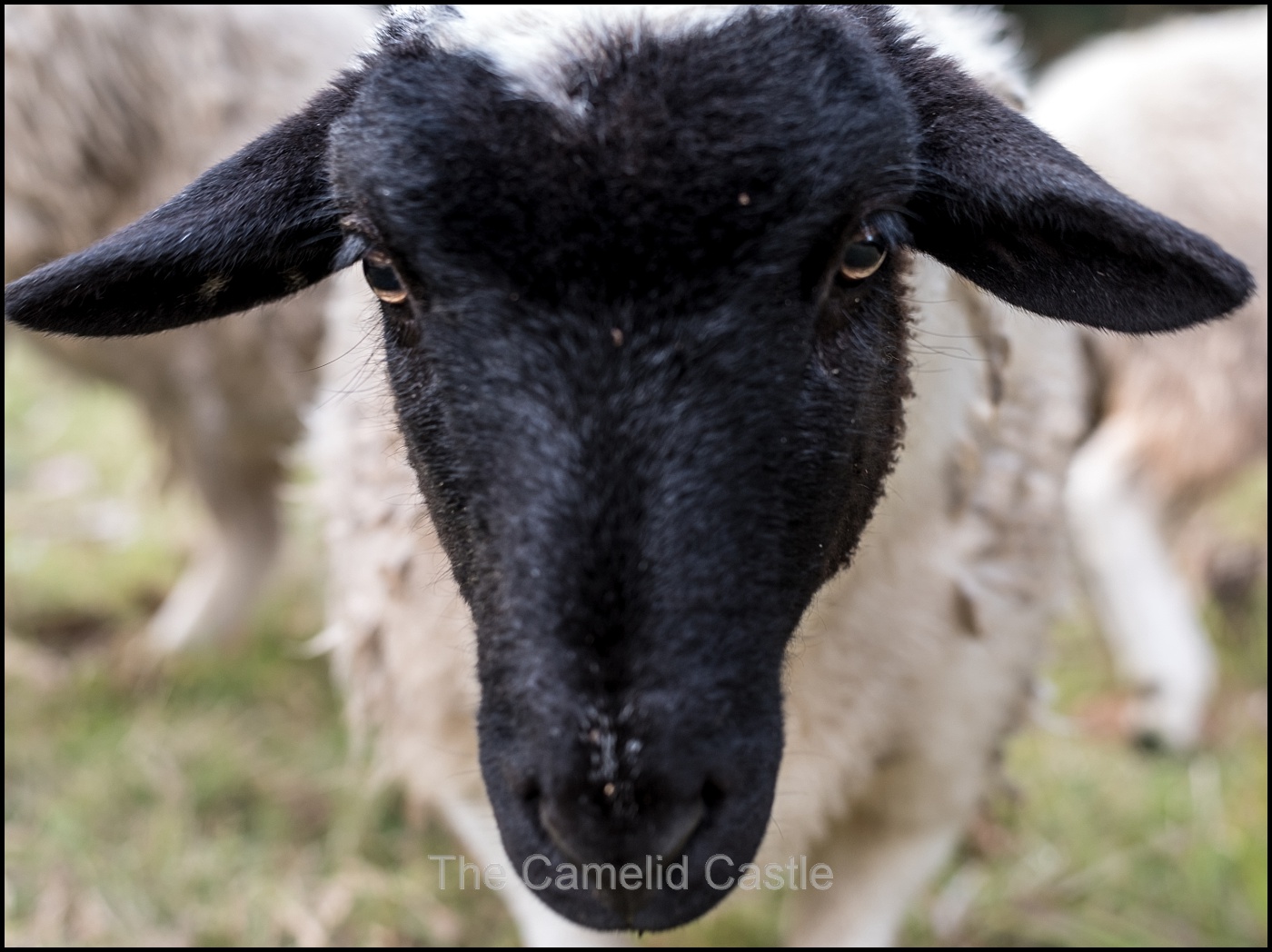 The sheep were quite the fans of being hand fed, and were a little too exuberant for Soren on our first visit. Despite him showing no fear of our much, much larger alpacas, the bouncy sheep freaked him out at first.  After he got used to them he was their best friend and would have spent all day with them.

Astrid was also enamored with the sheep, and was happy to feed, pat, and follow them around. The sheep were fans of us (it was the food I’m sure) but they got quite grumpy every time we left them and we had choruses of angry baa-ing when we left the paddock. More than once they snuck up on us as we were exploring the gardens. 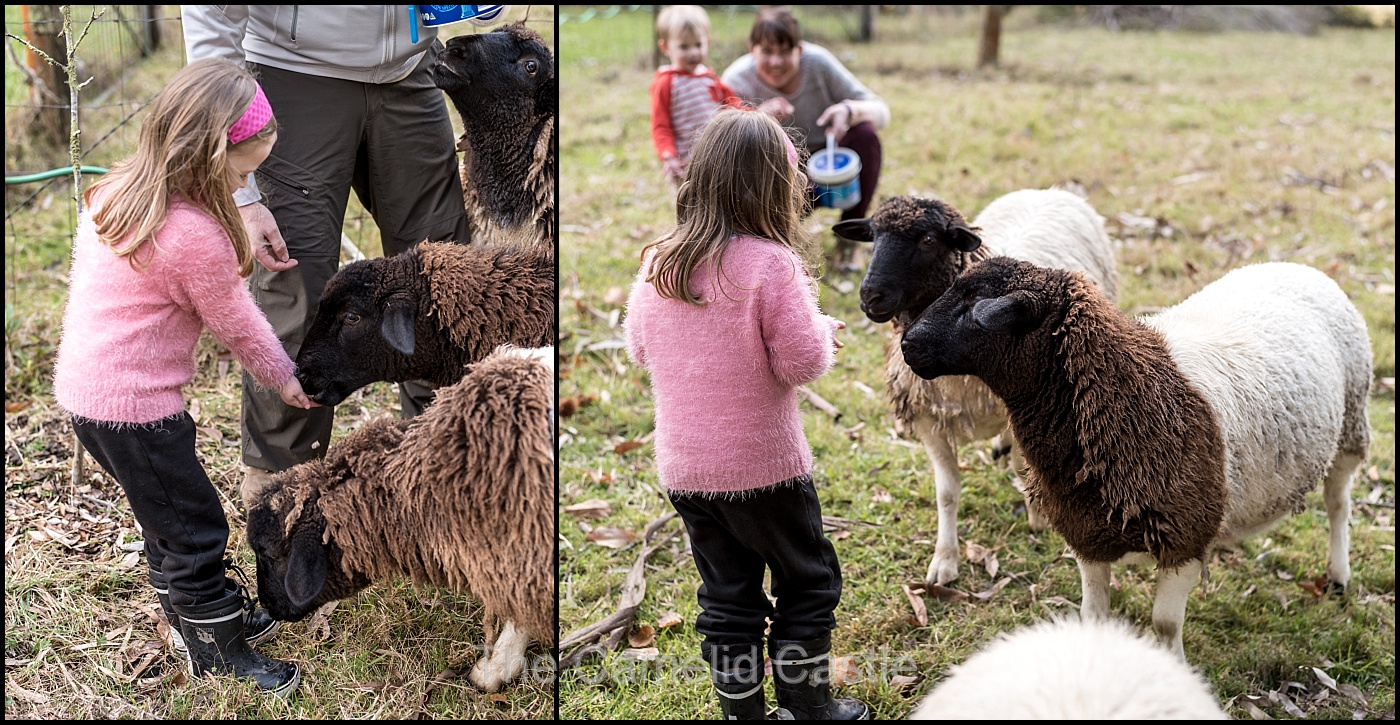 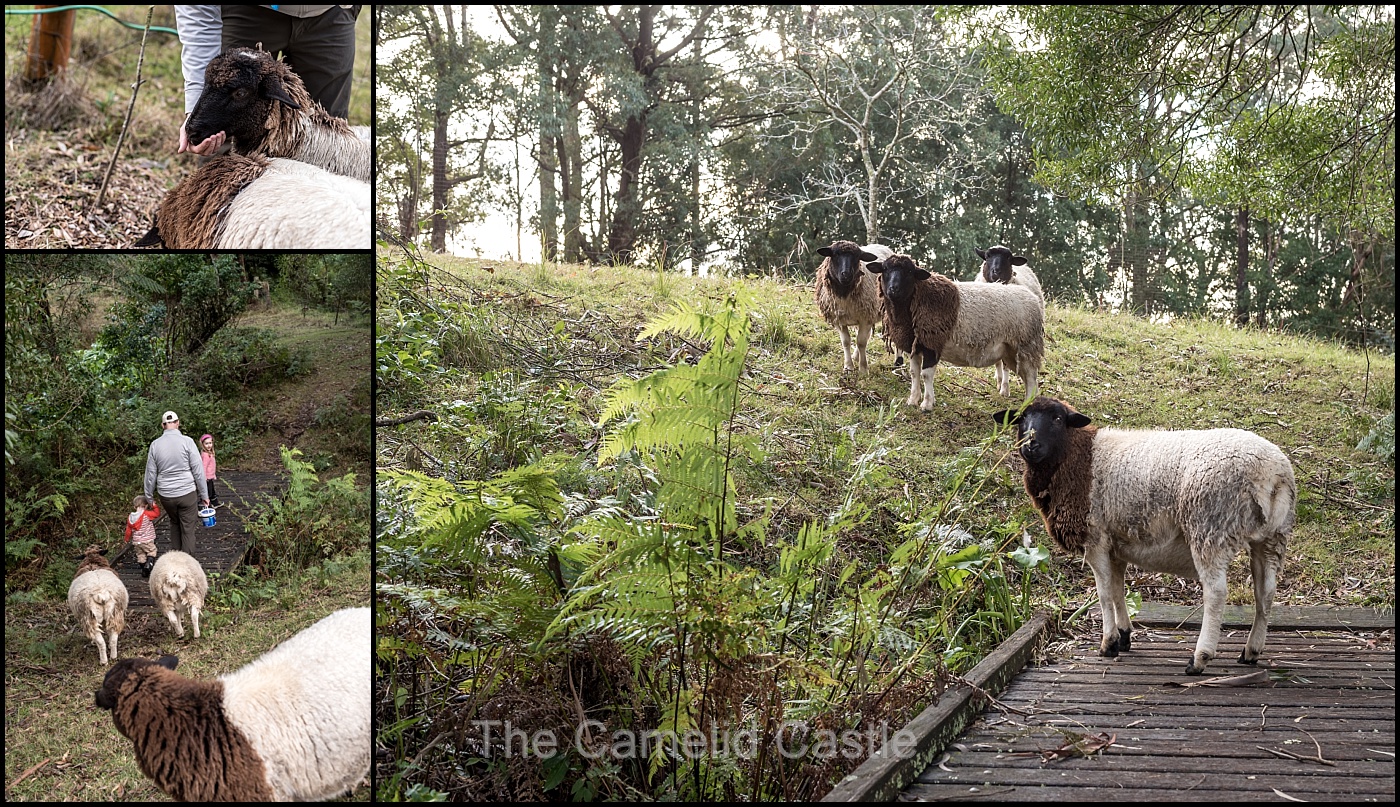 Speaking of gardens, they were amazing! It was the dead of winter and it was still beautiful.  The grounds are several acres, and there were plenty of different areas to explore, lots of ponds, flowers and beautiful (and huge) trees to investigate. 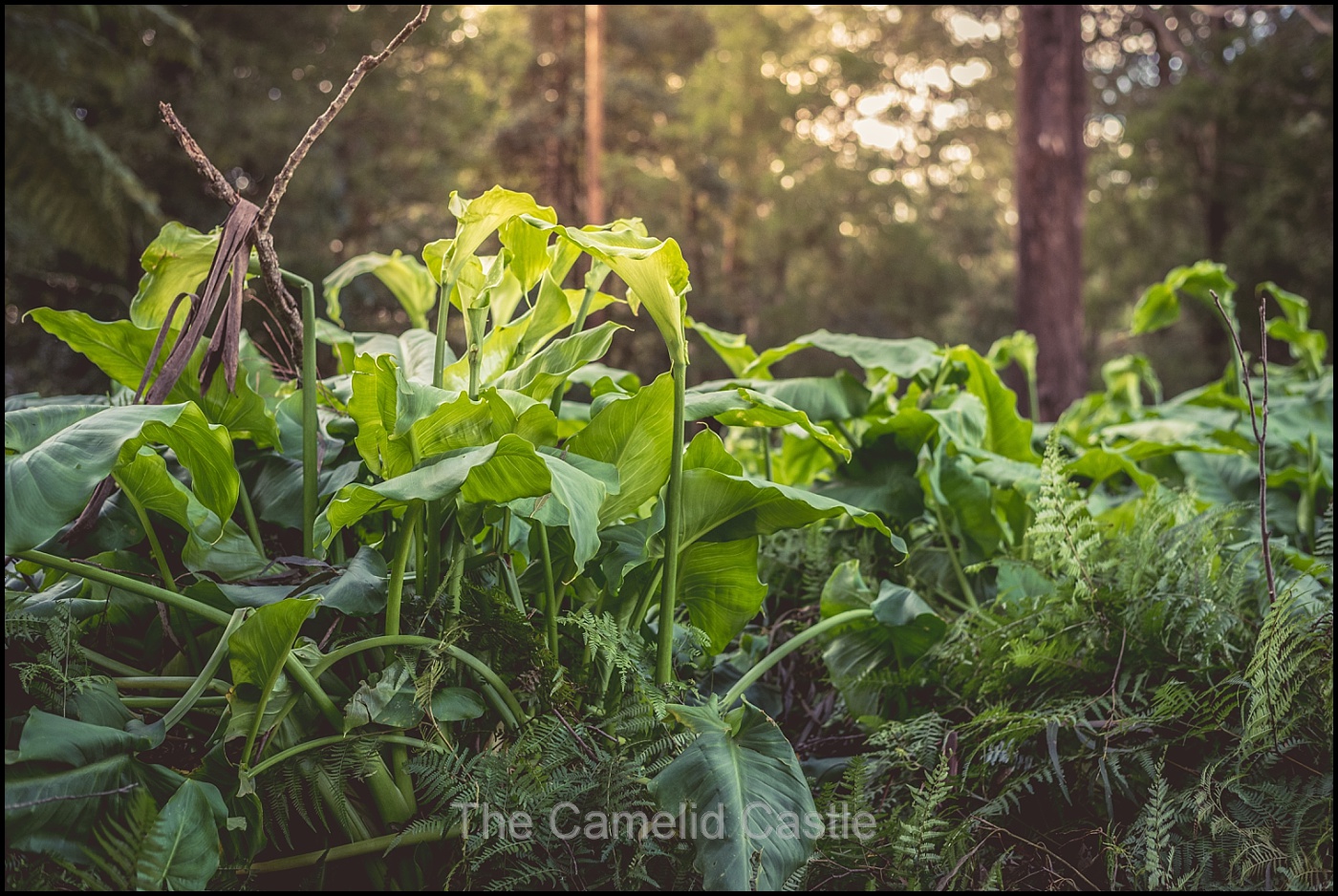 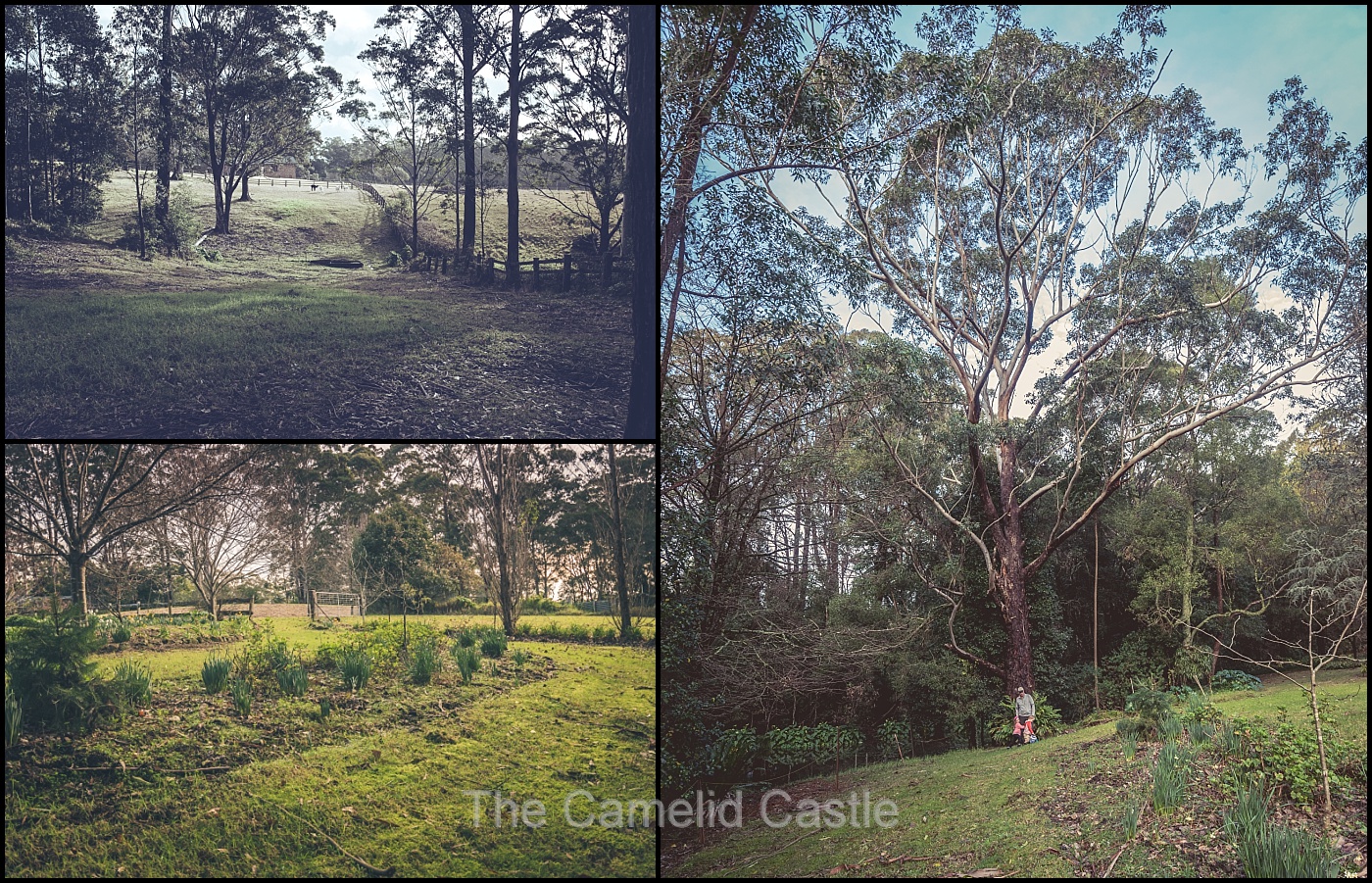 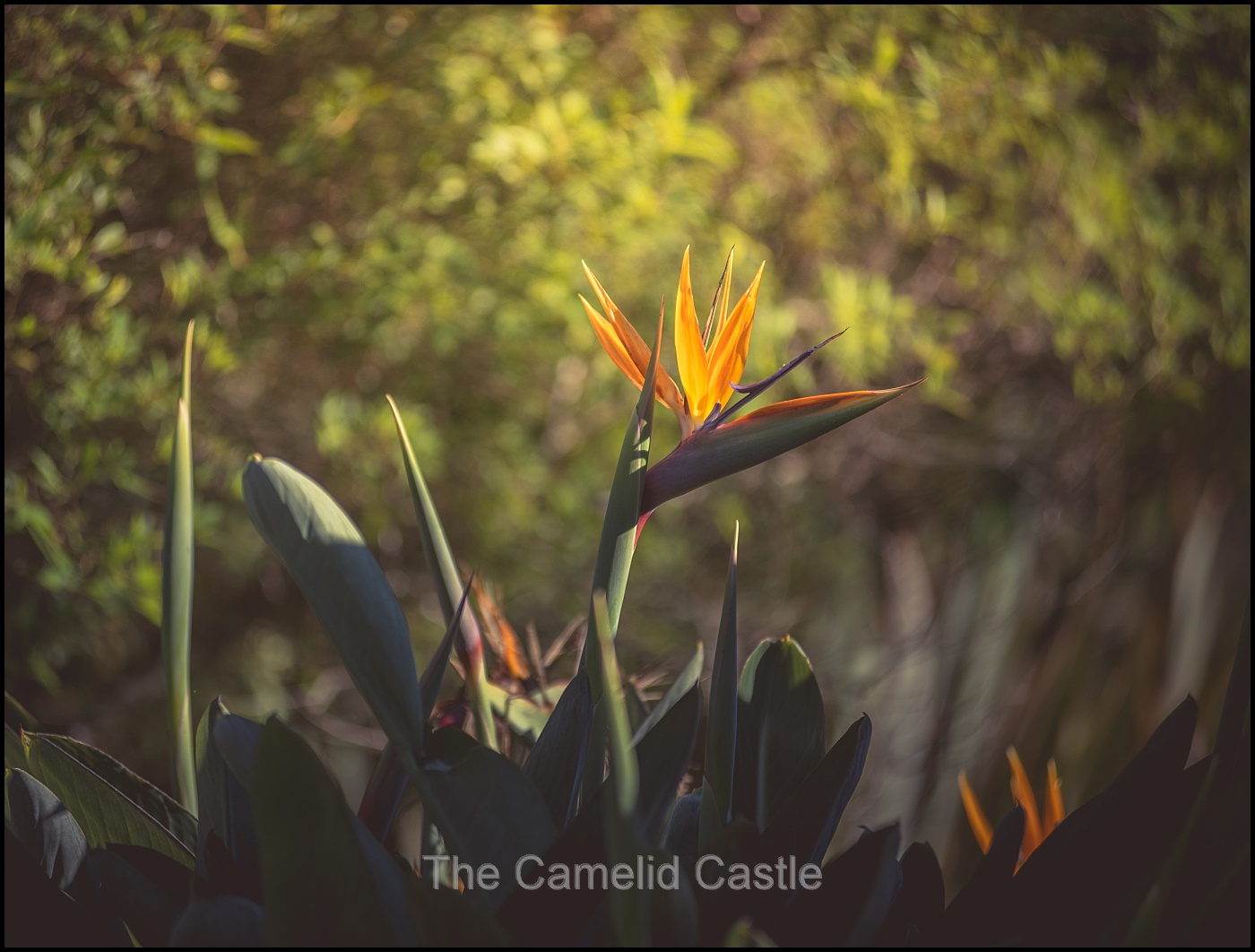 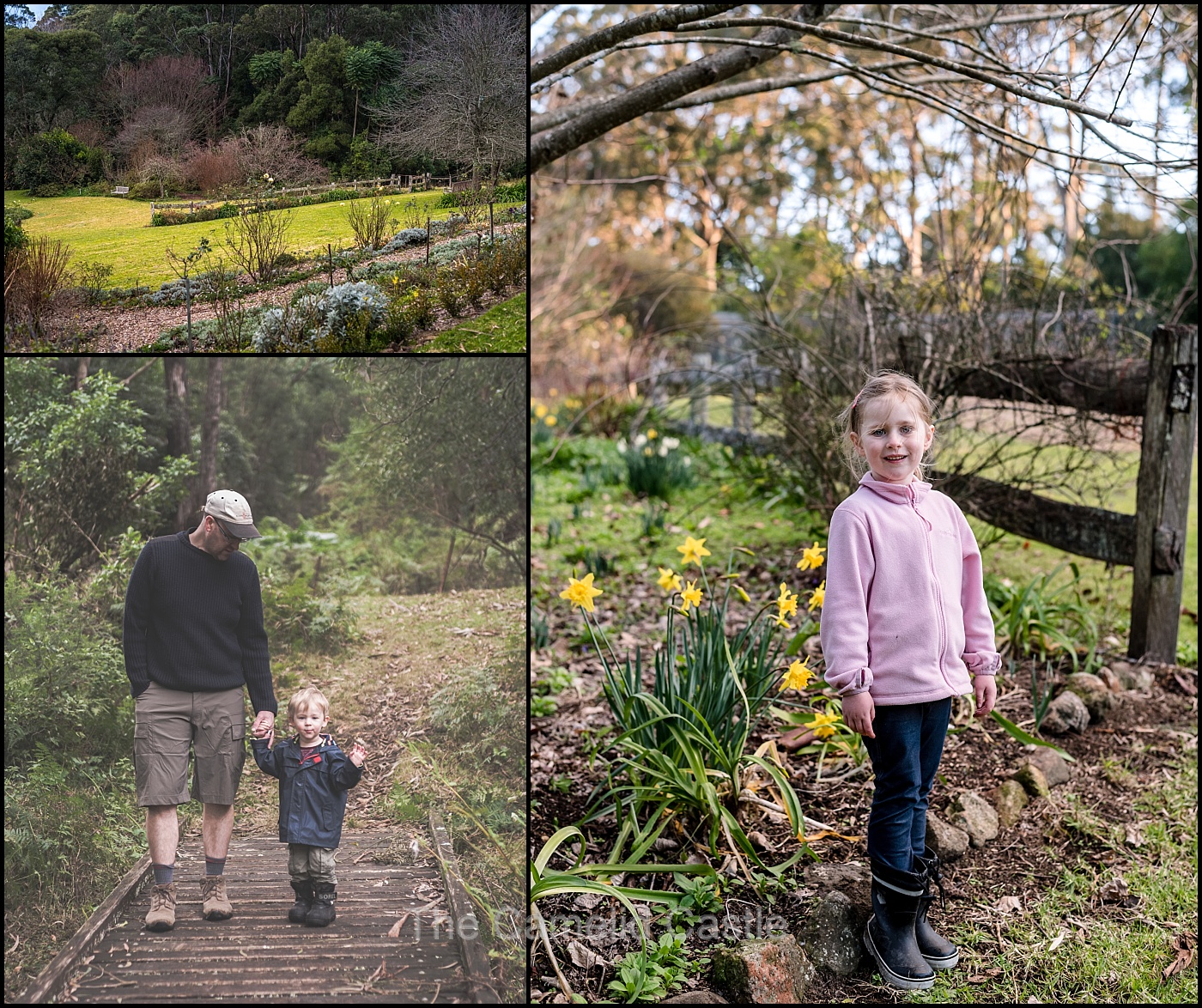 There was also plenty of space for the kids to run around.  It was lucky we had our waterproof boots as there had been a fair bit of rain and the grounds were a bit squelchy.  It didn’t stop the kids from burning off some energy in the garden and playing with the owners dogs, who also loved playing in the grounds.  I would love to come back to this place in Spring or Summer and see how wonderful the gardens look then! 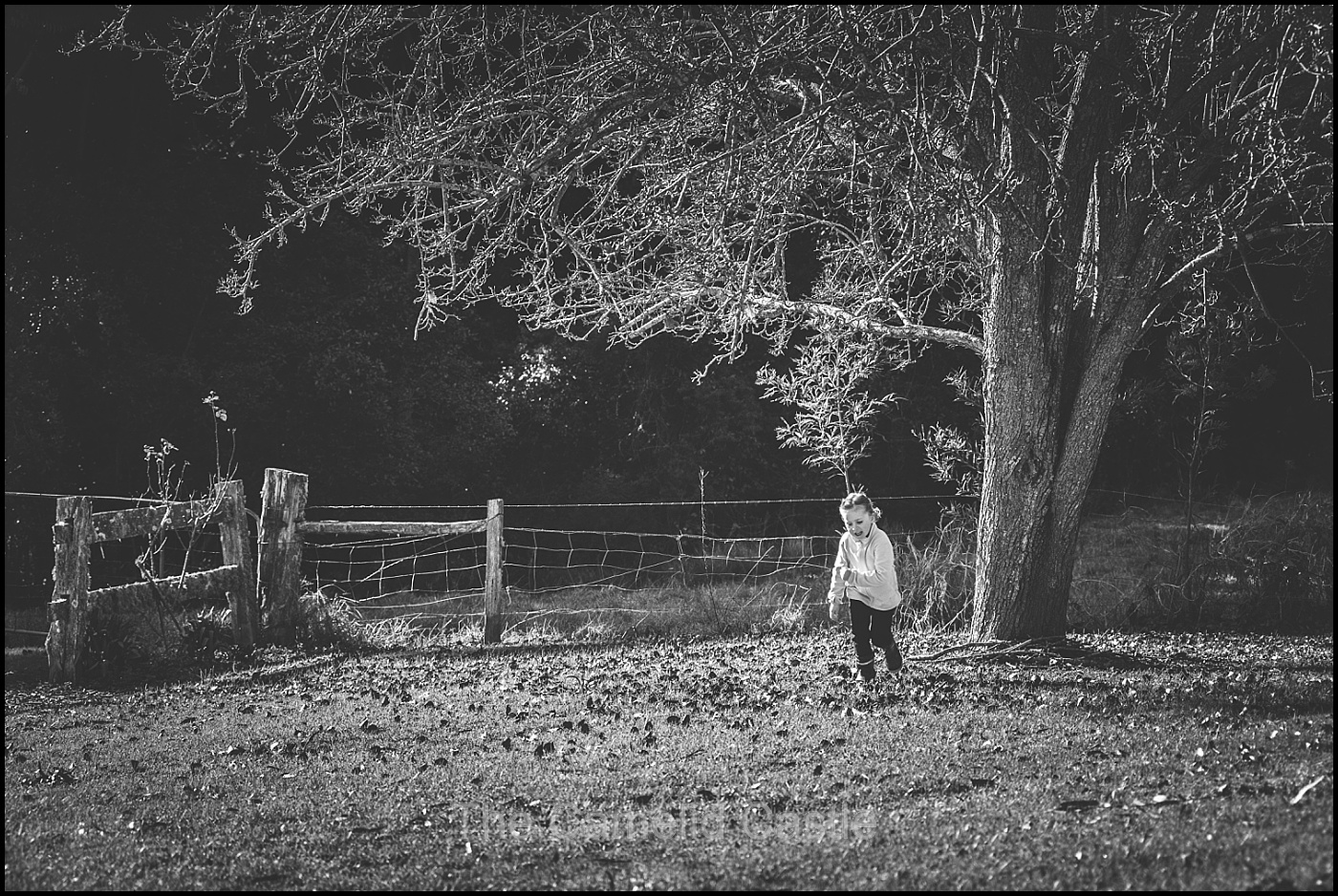 When we weren’t outdoors, the accommodation was definitely suited to our needs.  The cottage is attached to the main house by a deck, but entirely private.  Astrid had a sofa bed in the lounge area and we took our portacot for Soren, who was in the bedroom with us. The cottage also had a decent kitchen and a comfy living area.  Jenny and Nick, who run the B&B, kindly left some toys, books and DVDs for the kids.  They were happy to play inside once it was too cold (and dark) outside.  The adults were happy to drink wine, eat cheese and watch the Tour de France! 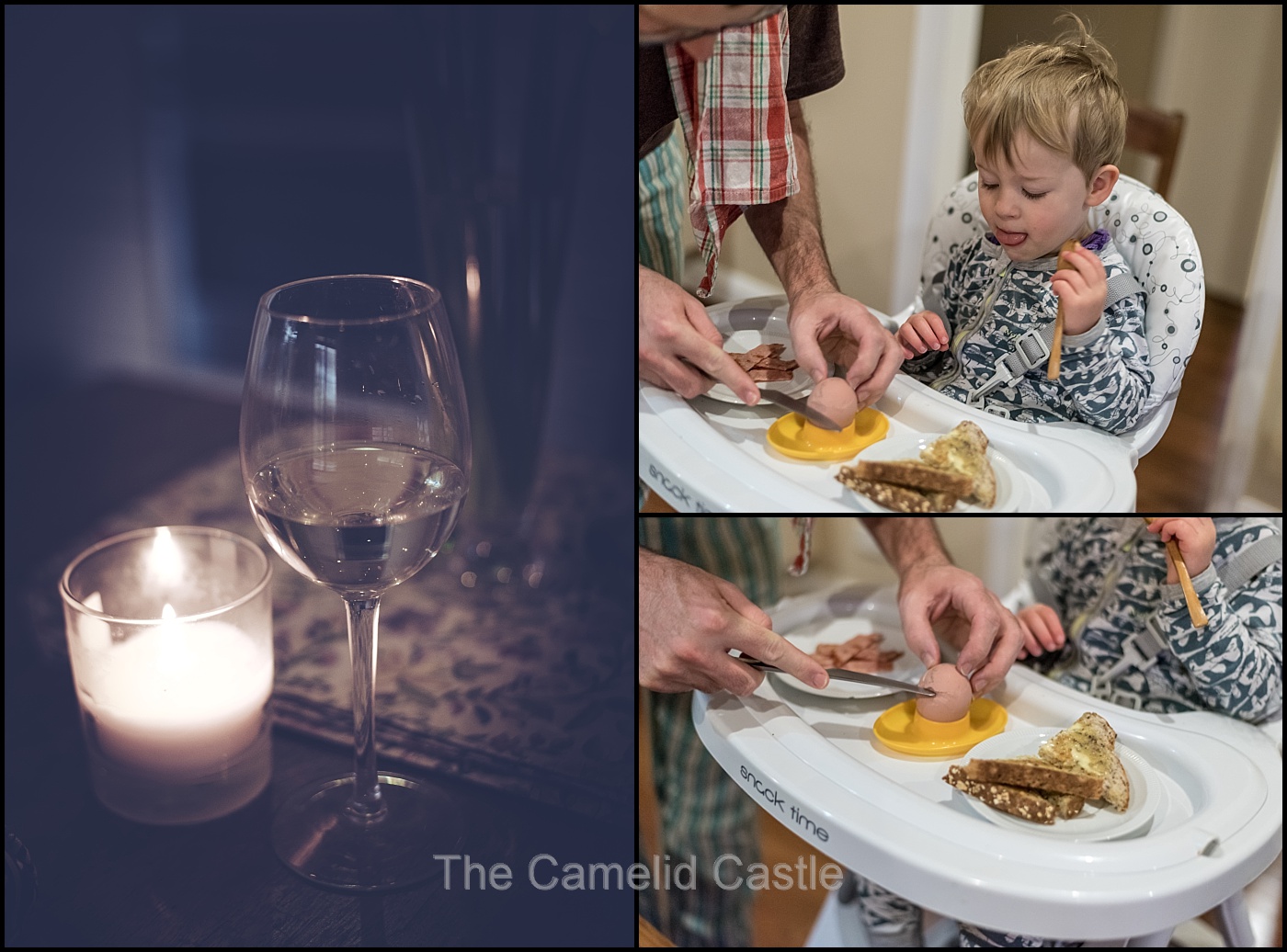 The downsides of the location are that it’s a windy drive into either Kangaroo Valley or Berry. Both have great food options, but we knew what it was like driving on that mountain in the dark, so came prepared to have dinner in the cottage.  We did our exploring during daylight hours and had a good lunch out, so the kids were happy to head back, feed the animals and have dinner in.  We also had eggs collected from the resident chickens for our breakfast every morning.

After our morning breakfast and play with the animals we could easily visit either Berry or Kangaroo Valley. Both towns are full of quaint shops, cafes, and old school toy stores.  Berry is significantly bigger, with far more shops, and we found plenty to wander around. We are total coffee snobs and had amazing coffees at several cafes. We also found plenty of shops with tasty treats and came home with a collection of fantastic chocolates and lollies.

One afternoon we went into the much smaller Kangaroo Valley town, to check out the wooden toy store, the town cat (who loved our pats, or at least tolerated them) and to get an icecream.  We had promised the kids icecream, but had been a bit full after all our Berry cafe visits so missed out on the delicious icecreams we kept spying while walking around. We did make up for it with icecream in Kangaroo Valley, and Astrid even made it all the way back to our accommodation without puking! She is a bit of a worry on windy roads at the best of times, so did well.

The Kangaroo Valley area is beautiful and we had a few lovely drives to check out the views.  It’s actually hard to get any decent photos as there aren’t that many places you can safely pull off the roads to take photos.

There are several lookouts and from the top of the mountain you can see across to the coast and Nowra.  We actually visited nearby Seven Mile Beach one of the days (which I will post about separately), but managed to up our ‘driving on insanely winding roads’ quota by visiting several lookouts.

It was only a short getaway, but we ate, drank, saw lots of spectacular scenery and escaped the Canberra cold for a couple of days, so mission accomplished!  The kids adored Wombat cottage and it was perfect for our needs, with great facilities, gardens, sunsets and hosts so it’s worth checking out if you are after a similar experience. 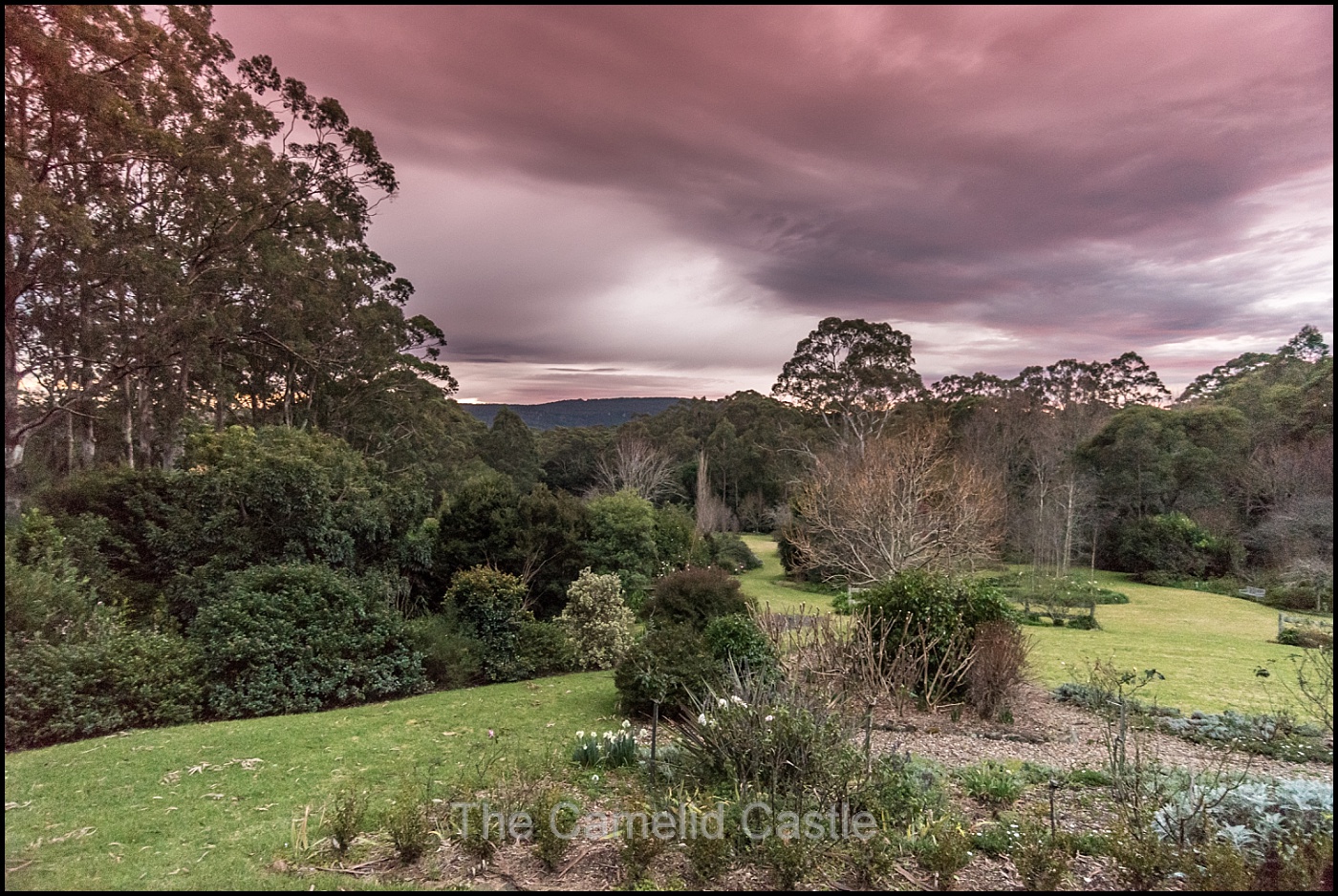