It’s hard to believe my little Søren-o-saurus is now a big 3 year old, but back in October we celebrated his 3rd birthday in style.  There were of course lots of presents, a breakfast of dutch pancakes, a Chinese dinner out, merry-go-round rides and then a family party with the cutest Alien cake his parents could whip up!

The night before the big day, the pile of loot had to be assembled.  I had assured Anto that we hadn’t bought much for his birthday, but it turns out that all the little bits we’d been stashing away might have added up to an impressive pile.  I think there was going to be one excited boy the next day…..

Yep, this was the excited face of the birthday boy!  To his credit he didn’t get up until the sun came up on his gro-clock at 7am, but he was absolutely ready to get stuck into his third birthday….. 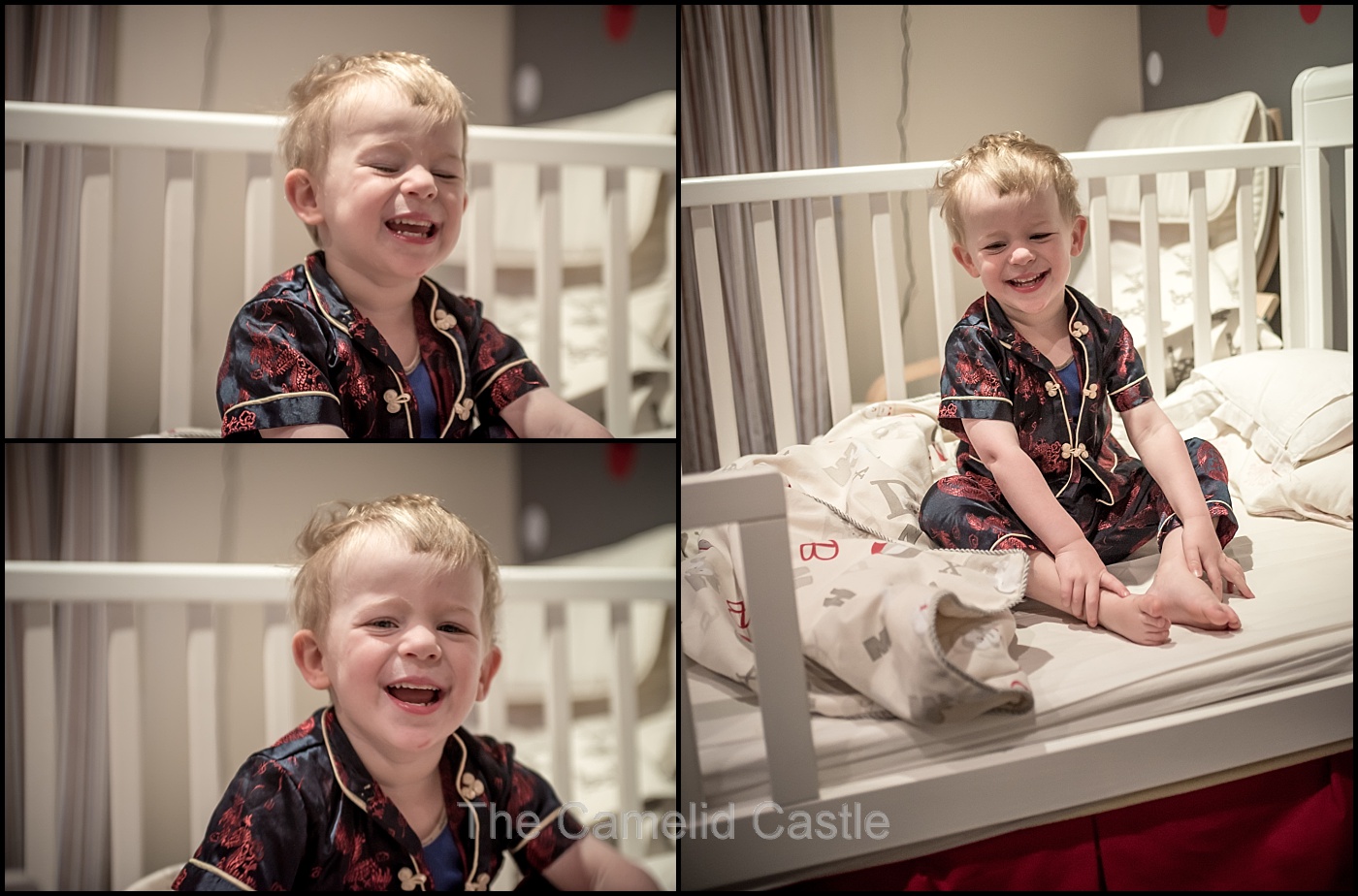 …… and he absolutely got stuck into those presents!  Astrid wasn’t even allowed to give her usual level of assistance, much to her annoyance. 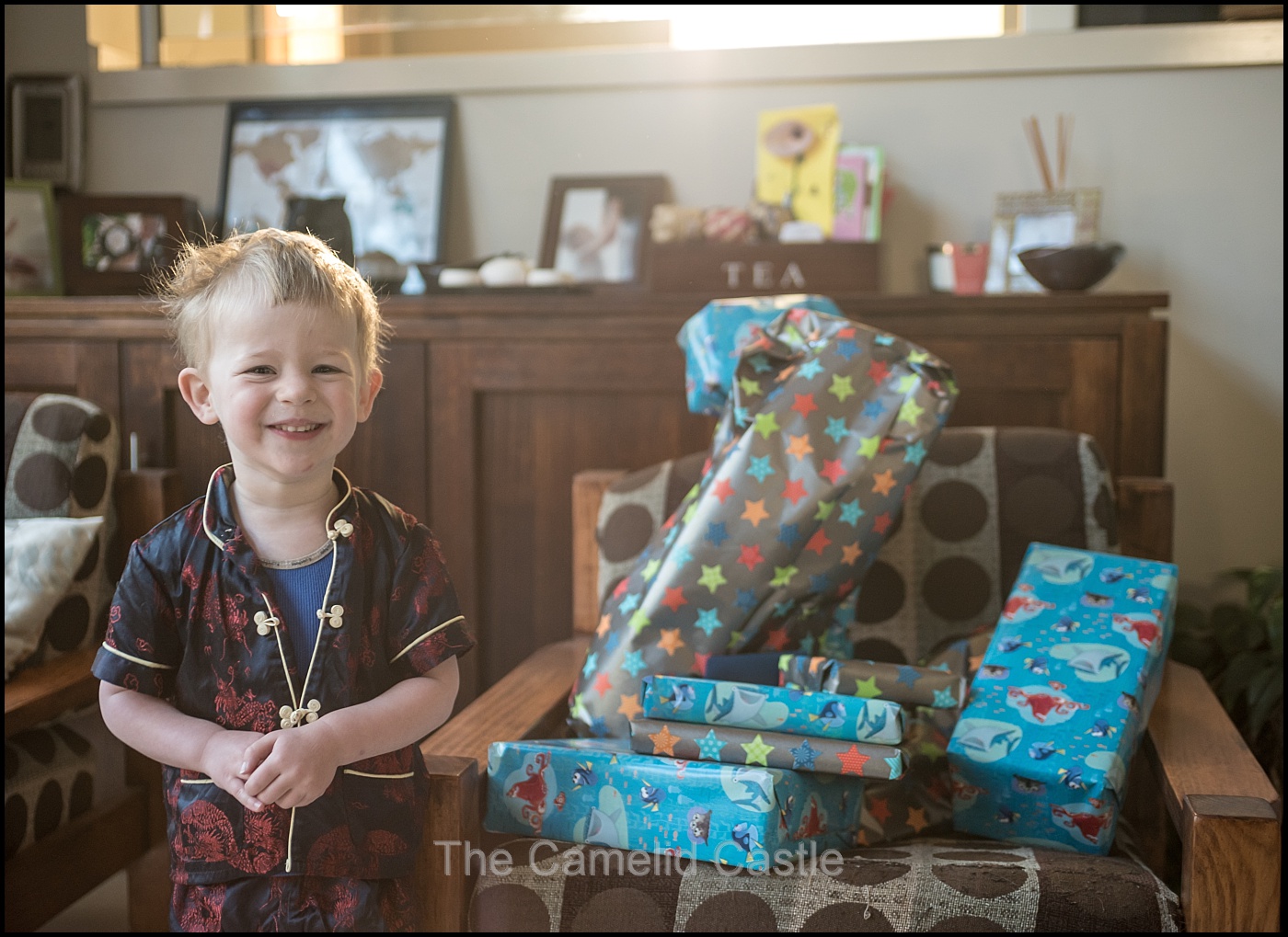 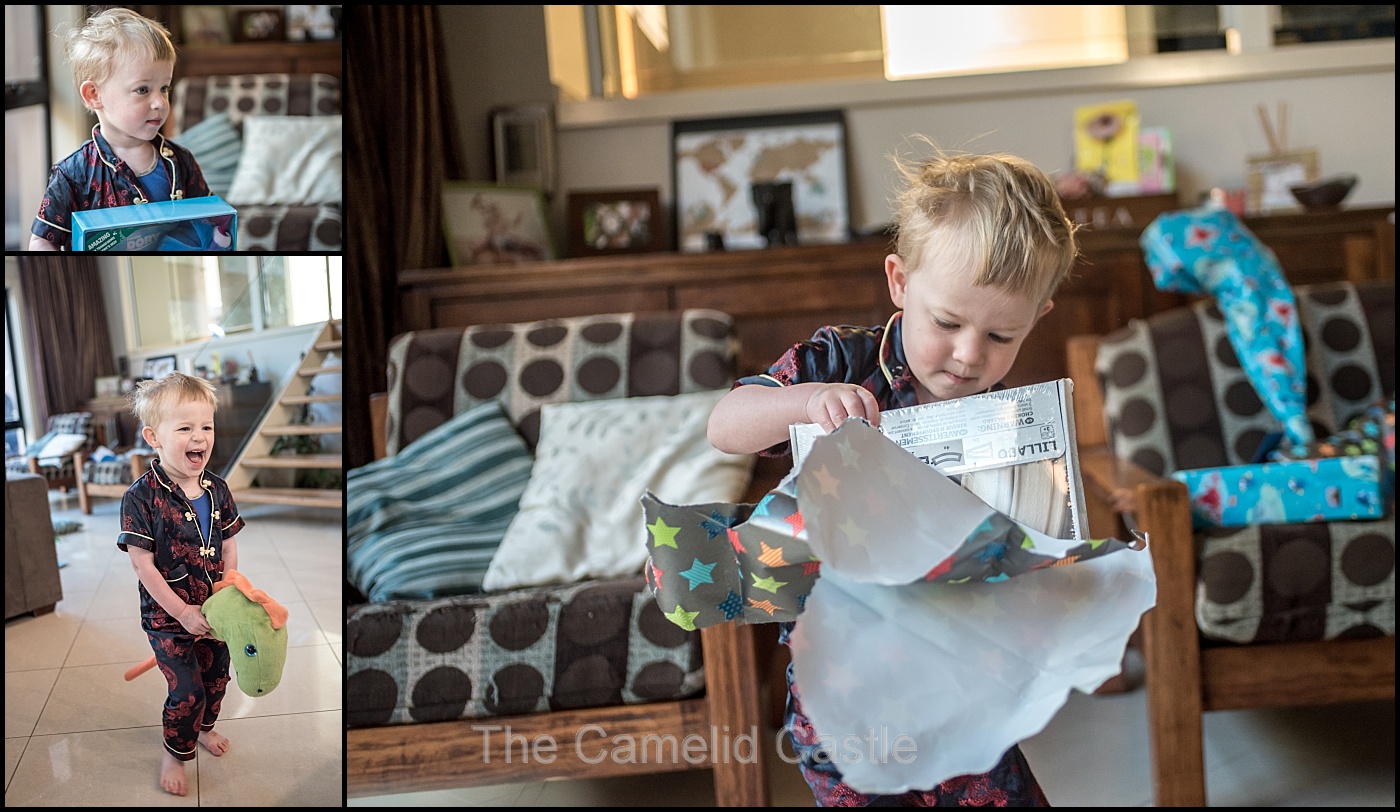 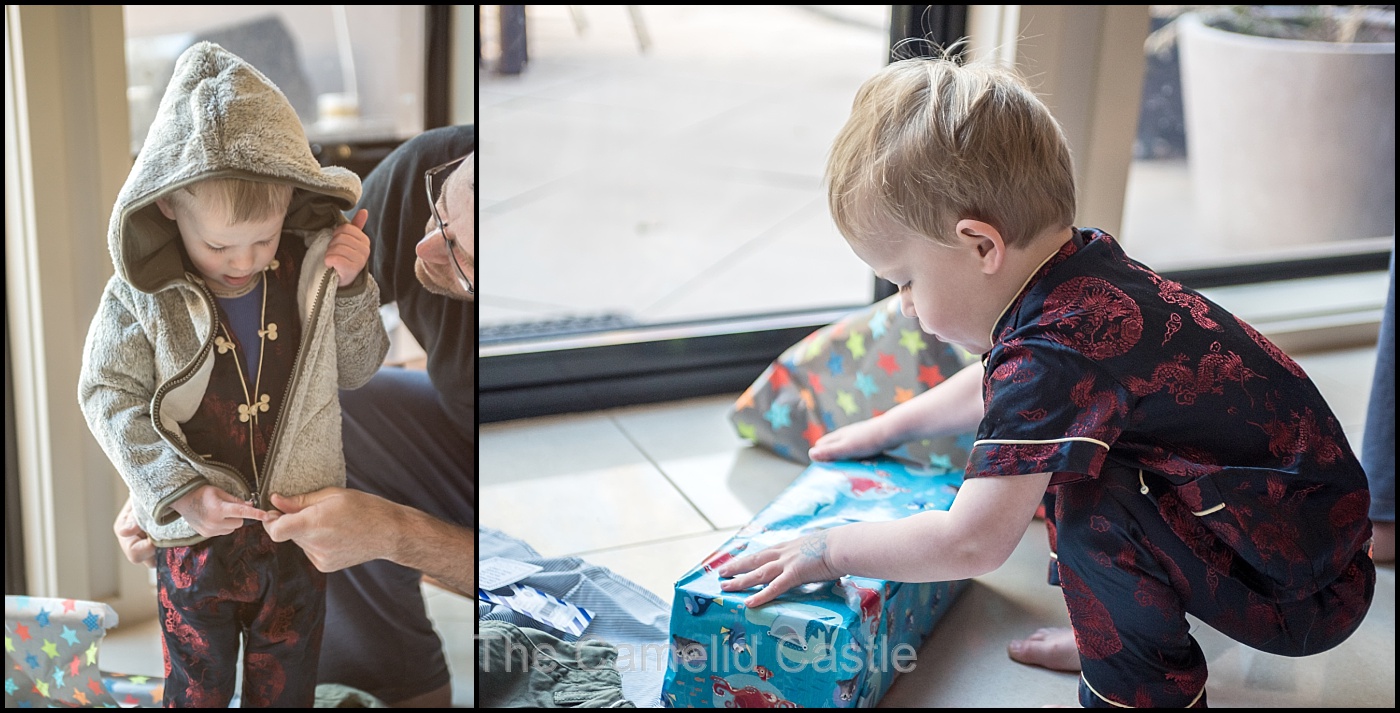 Presents were a hit and had to be thoroughly played with! Hungry tummies got in the way though, and it was time to eat some poffertjes (Dutch pancakes), Søren’s birthday breakfast request, and another late night parent project. With home made chocolate sauce, banana and cream, of course! 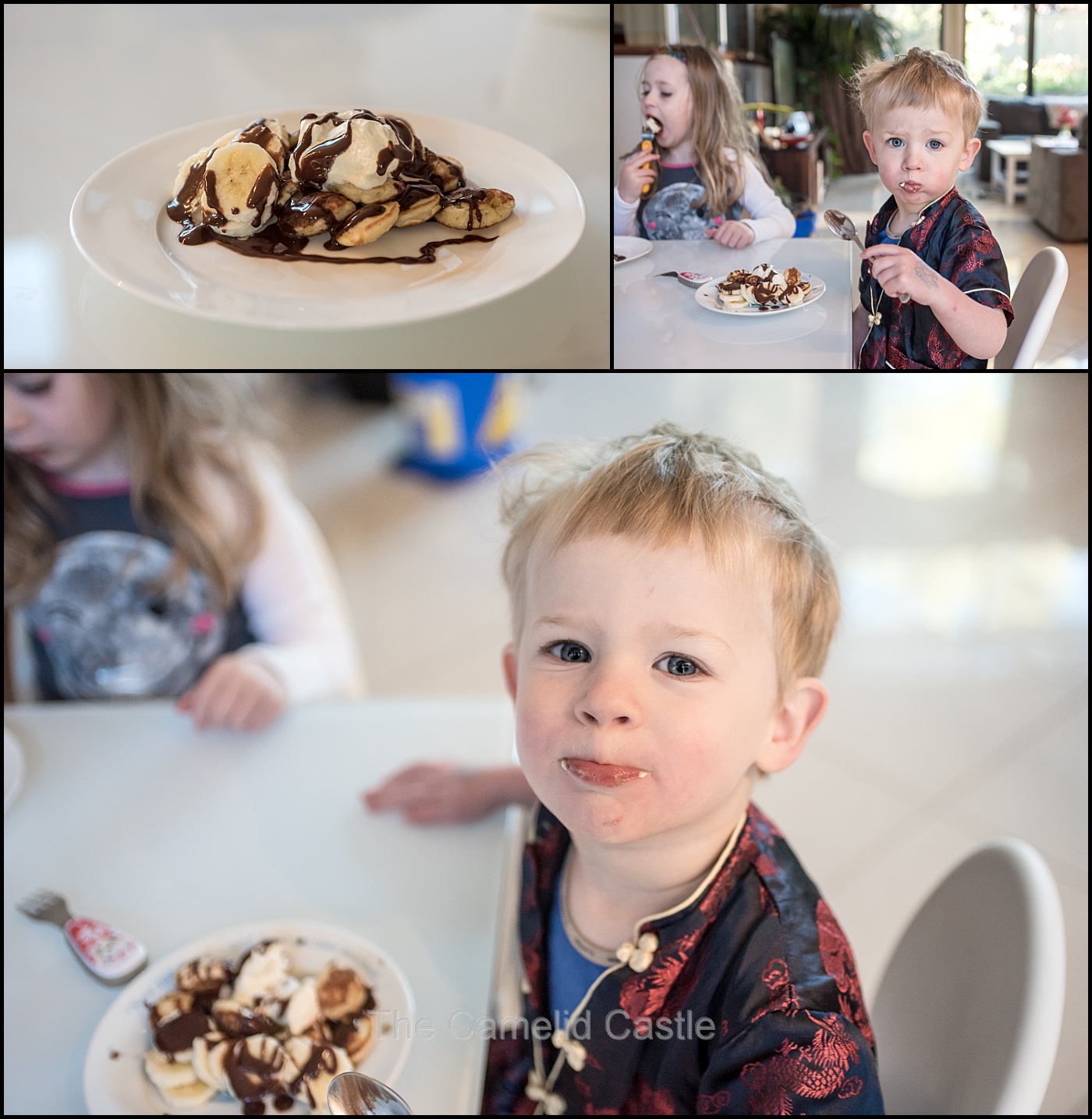 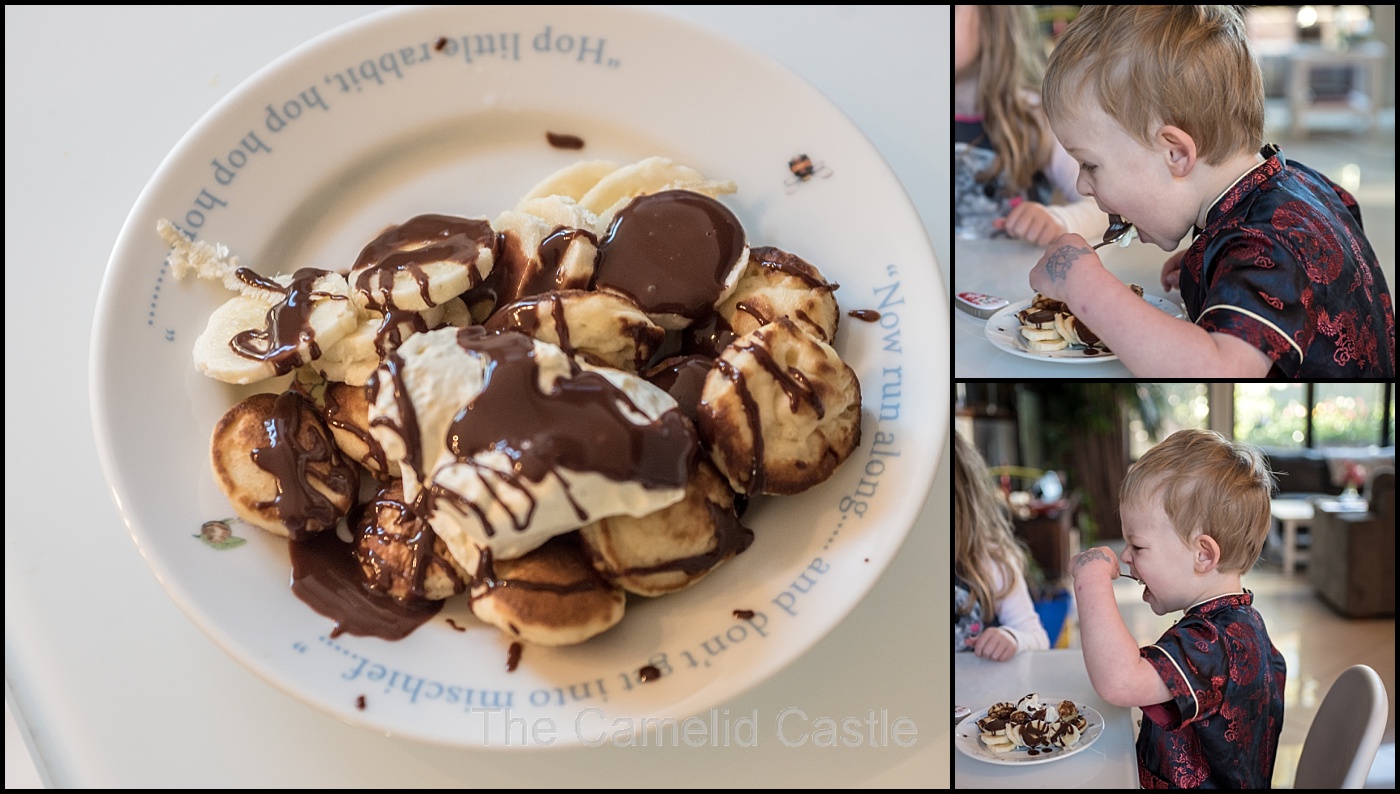 Søren’s birthday was a Thursday, so it was a school day for Astrid, and a work day for Anto.  That meant Søren and I got to spend the day playing with his presents, aside from a quick trip out to the fruit and veg markets, where he got a special play in the playground.

Then it was home for his lunch request of an egg sandwich and nap time with his new giant bunny!

After nap time the grandparents began to arrive, and that meant more presents! Søren is now an expert at present unwrapping and had a ball running around playing with his new remote controlled dragon and car and catching every bug for his bug catcher.  A month after his birthday I’m thoroughly sick of being presented with dead (and worse, living) bugs and spiders in the bug catcher! 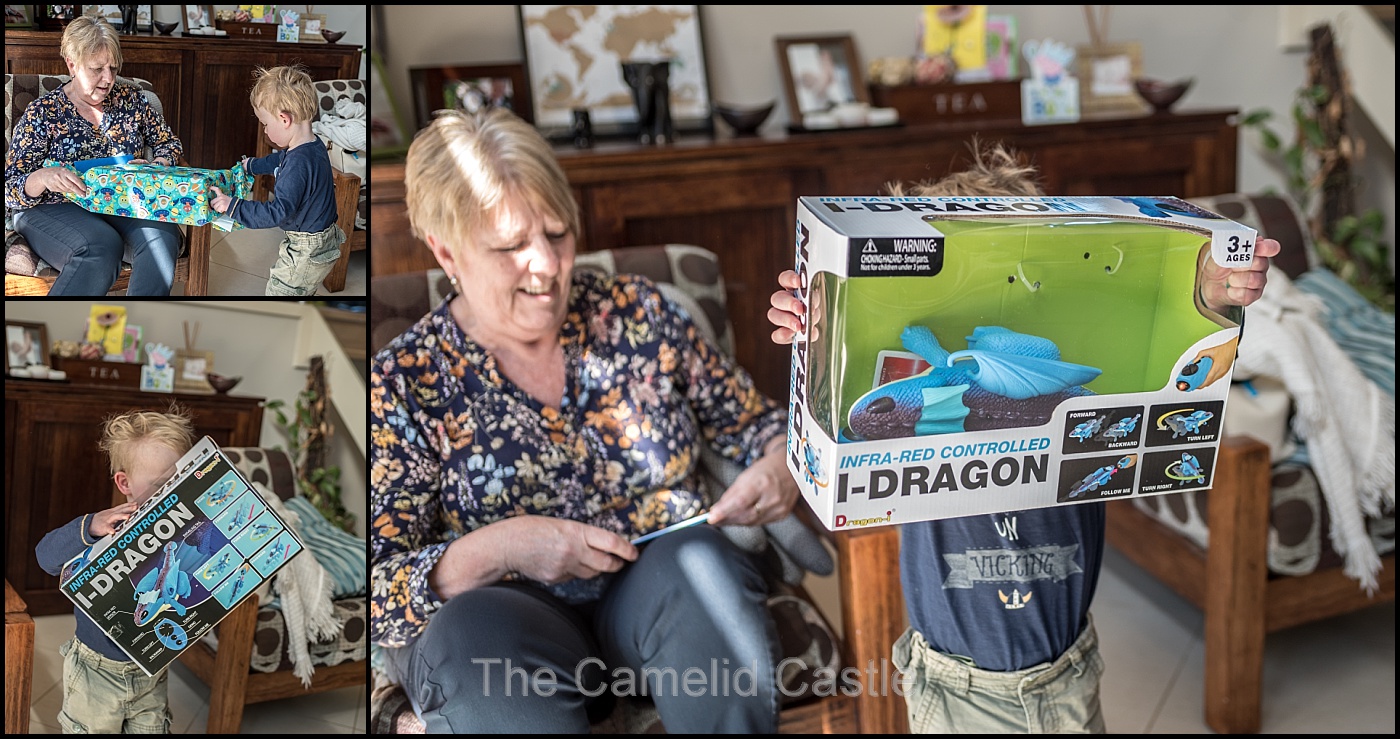 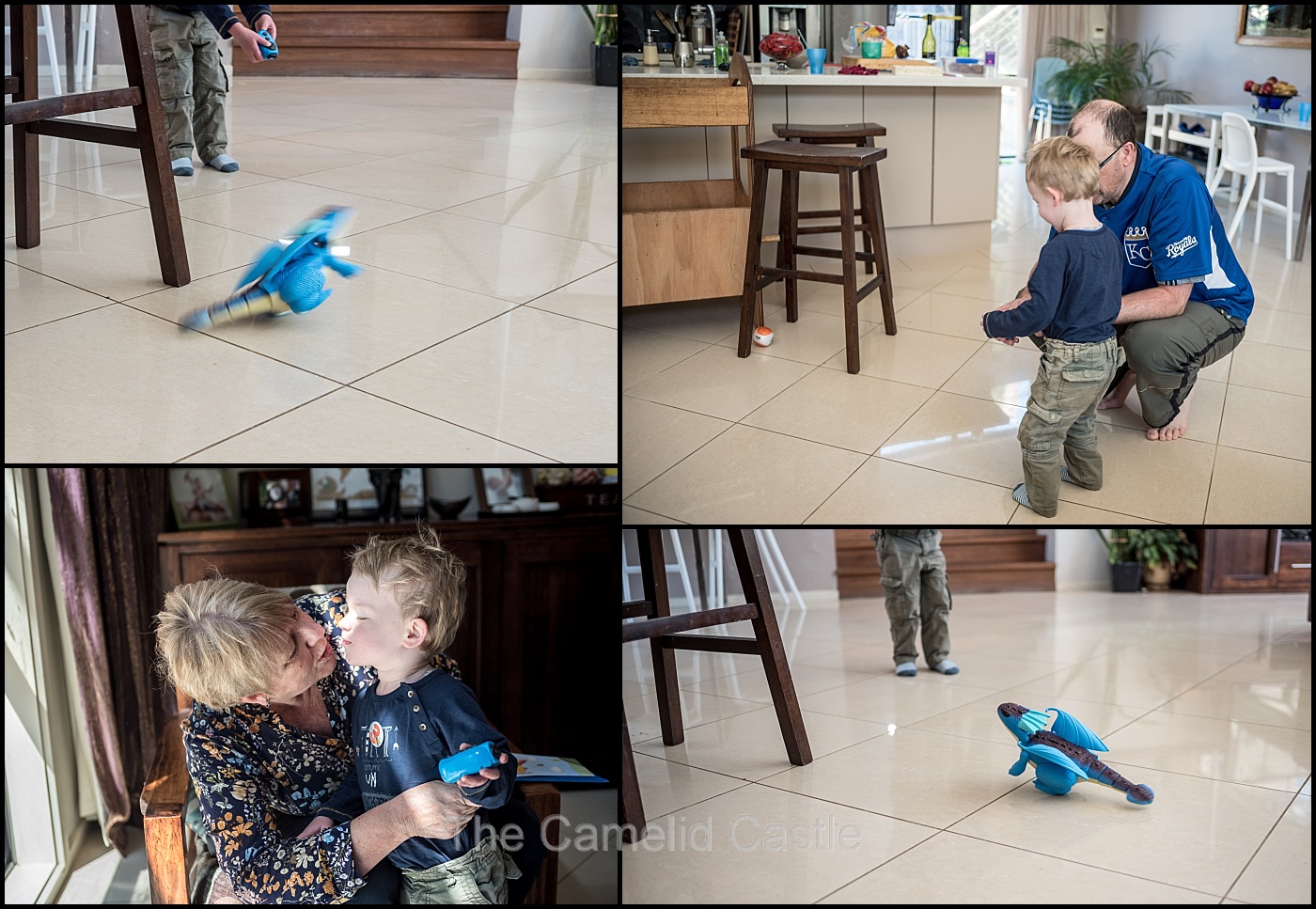 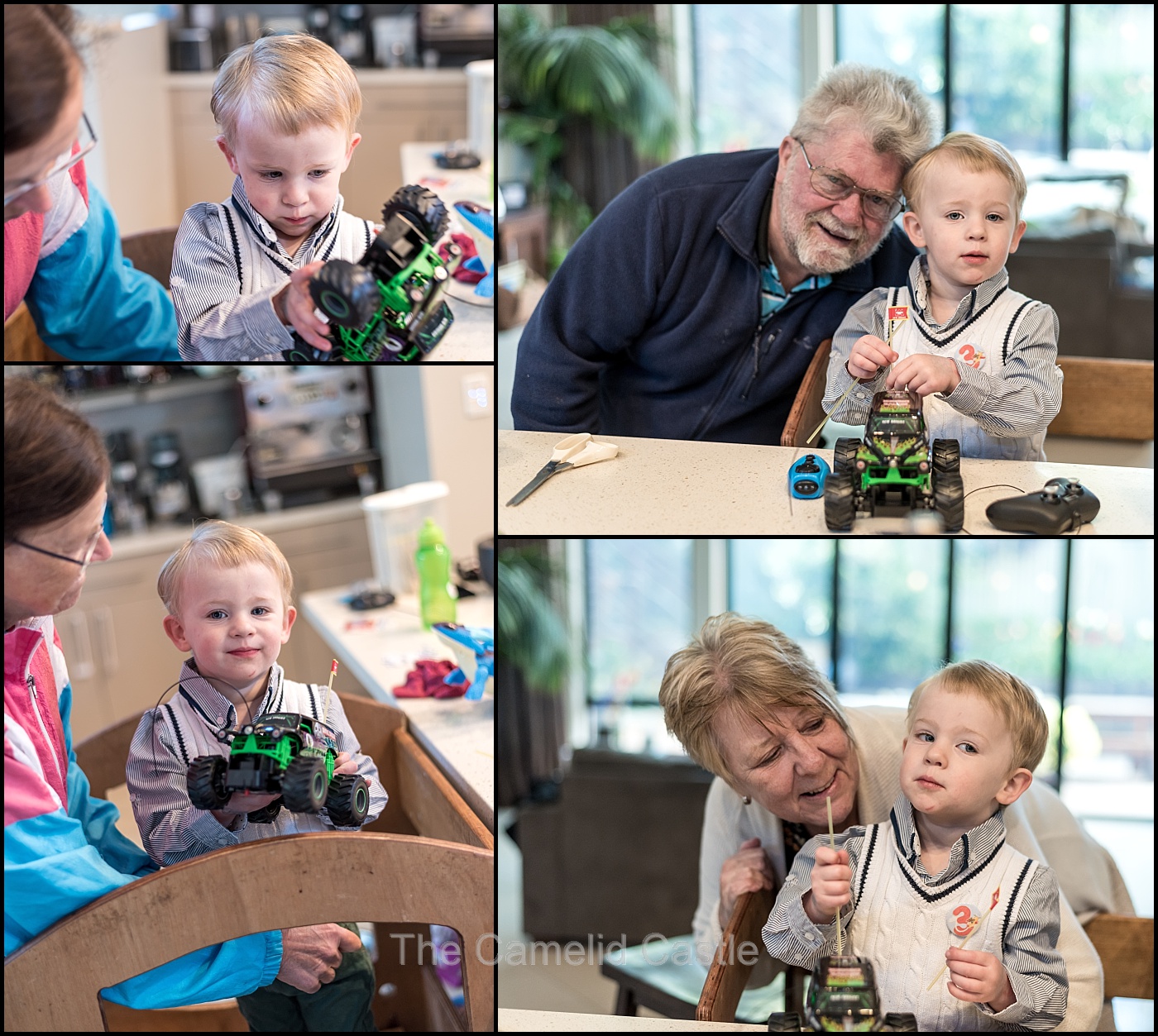 Pretty soon it was time to get dressed and head out to Birthday dinner!

After our recent trip to Hong Kong, Søren has become quite the fan of Chinese food, so he selected Sammy’s Kitchen in the city for his 3rd birthday dinner.  Three grandparents and an Uncle Mikl joined us for the food feast. The kids certainly love their Chinese food! 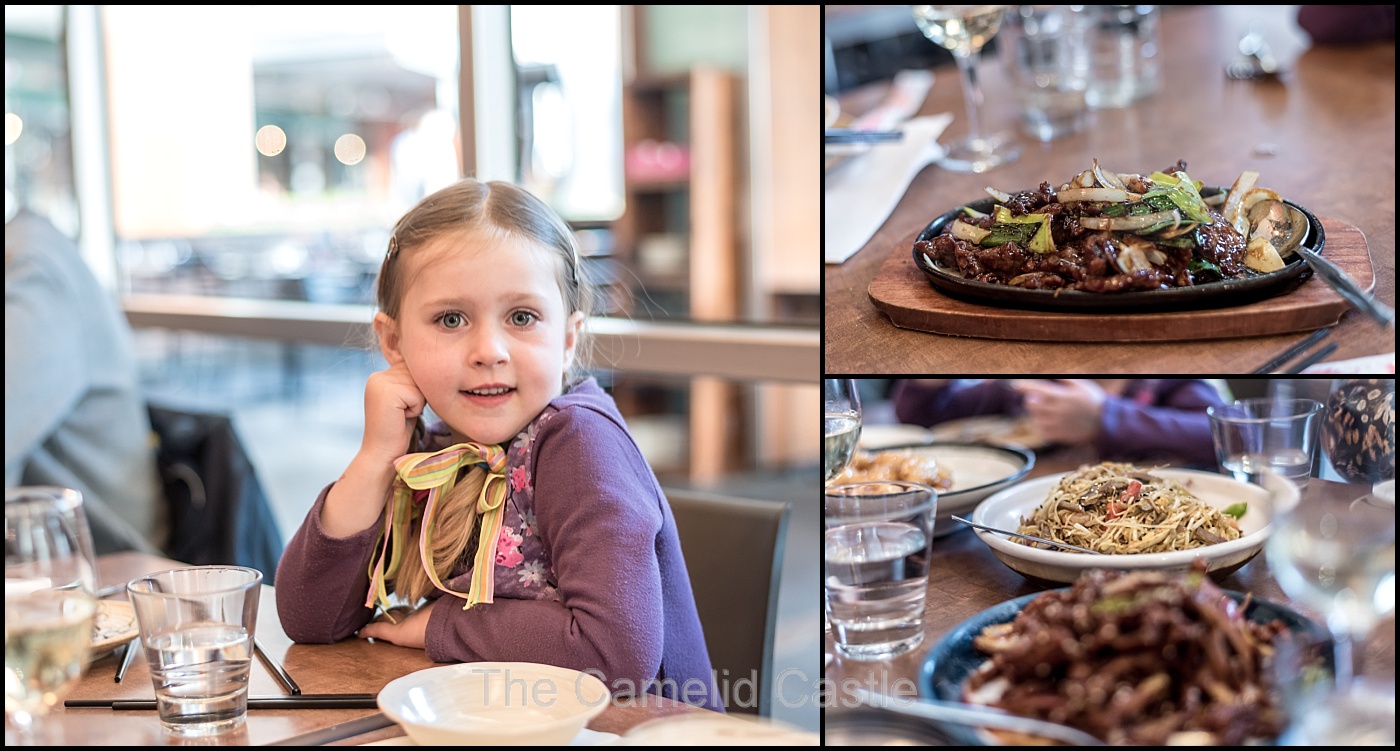 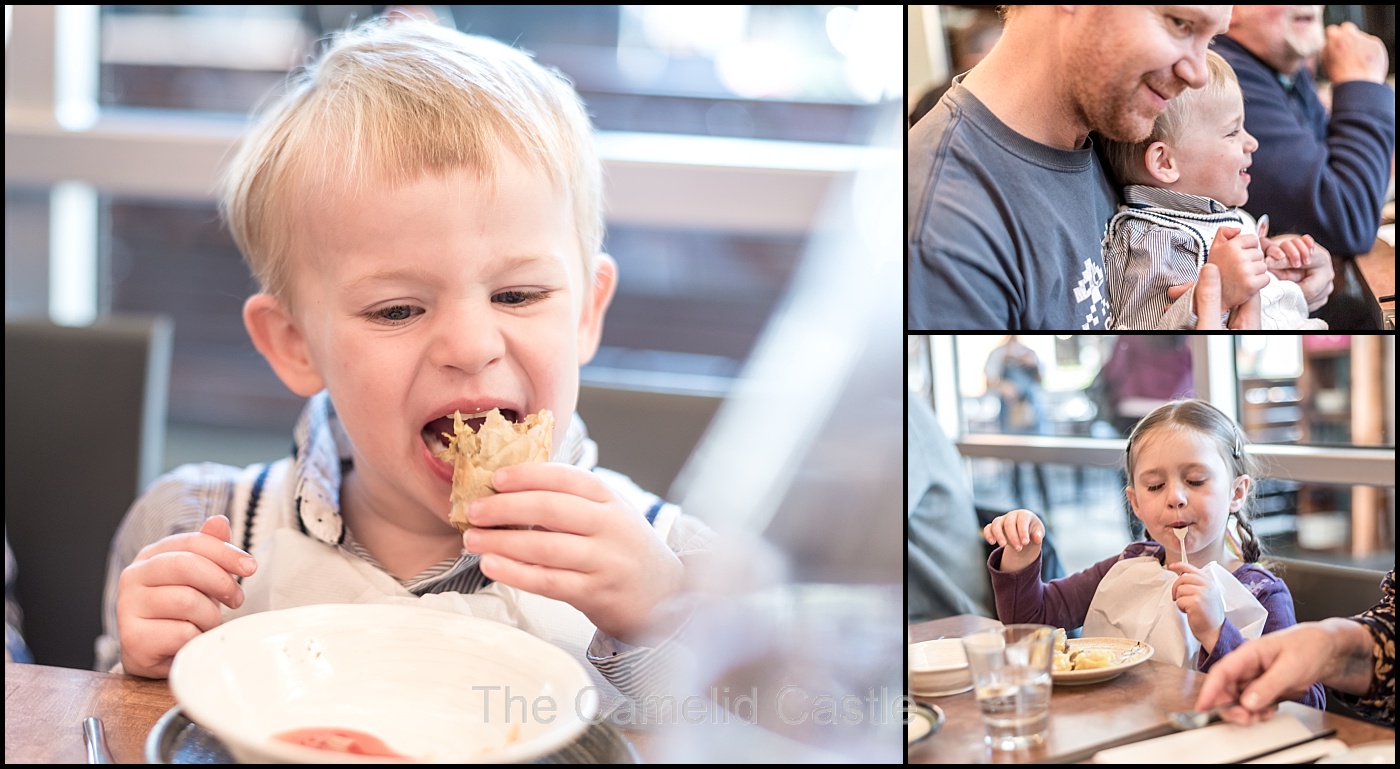 As we were holding out until Saturday for cake, birthday dessert was gelato. Despite stuffing ourselves stupid on dessert there is always room for gelato….. 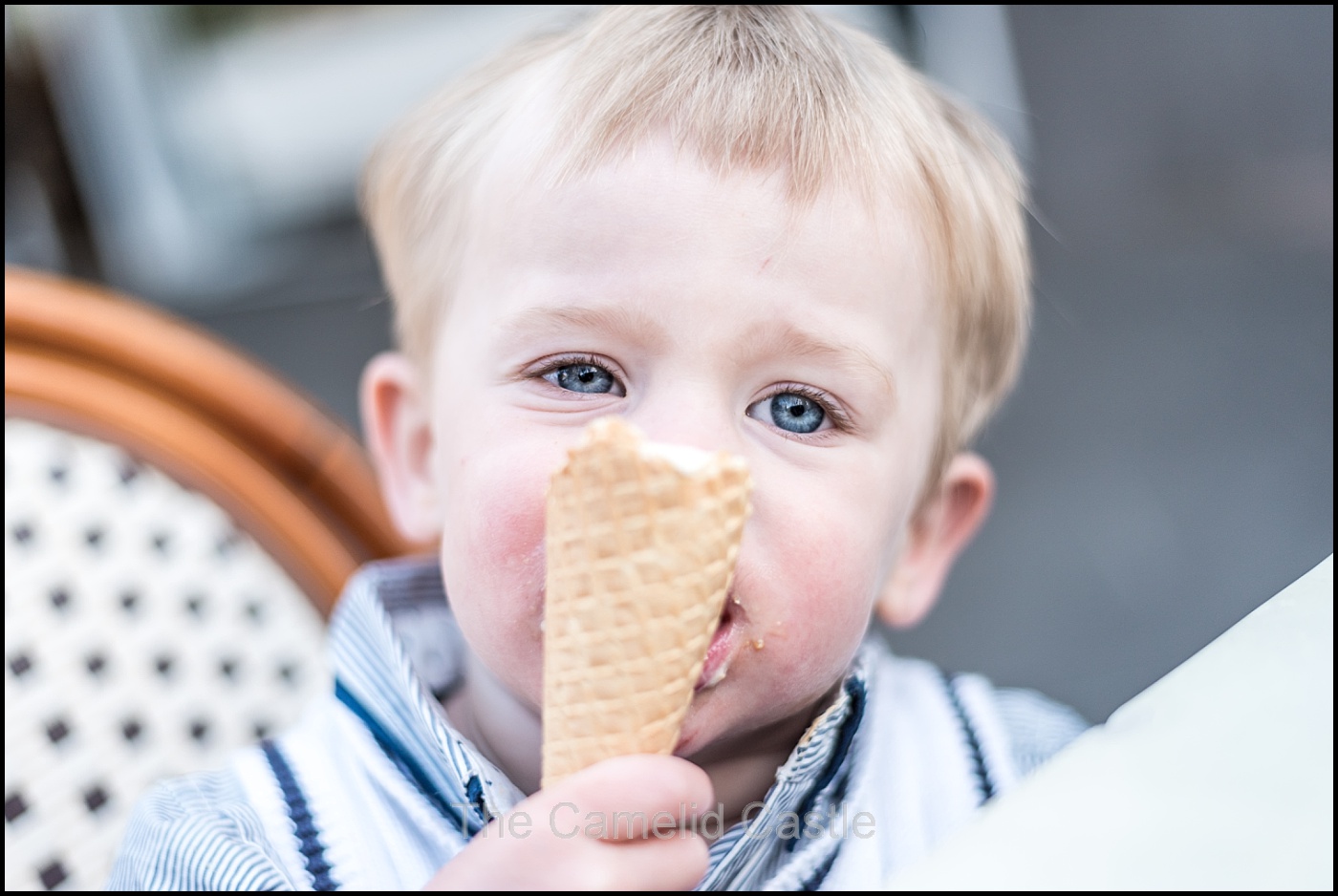 One very happy (and not very hungry) newly 3-year old went to bed that night! The birthday celebrations weren’t over yet though…..

Søren’s one birthday request was a ride on the merry-go-round in the city.  As he also wanted Astrid to have a ride we had to wait until the Friday afternoon when it was open outside of school hours. The vintage Civic merry-go-round is a perennial hit with the kids. I rode the same one as a kid and always loved it! 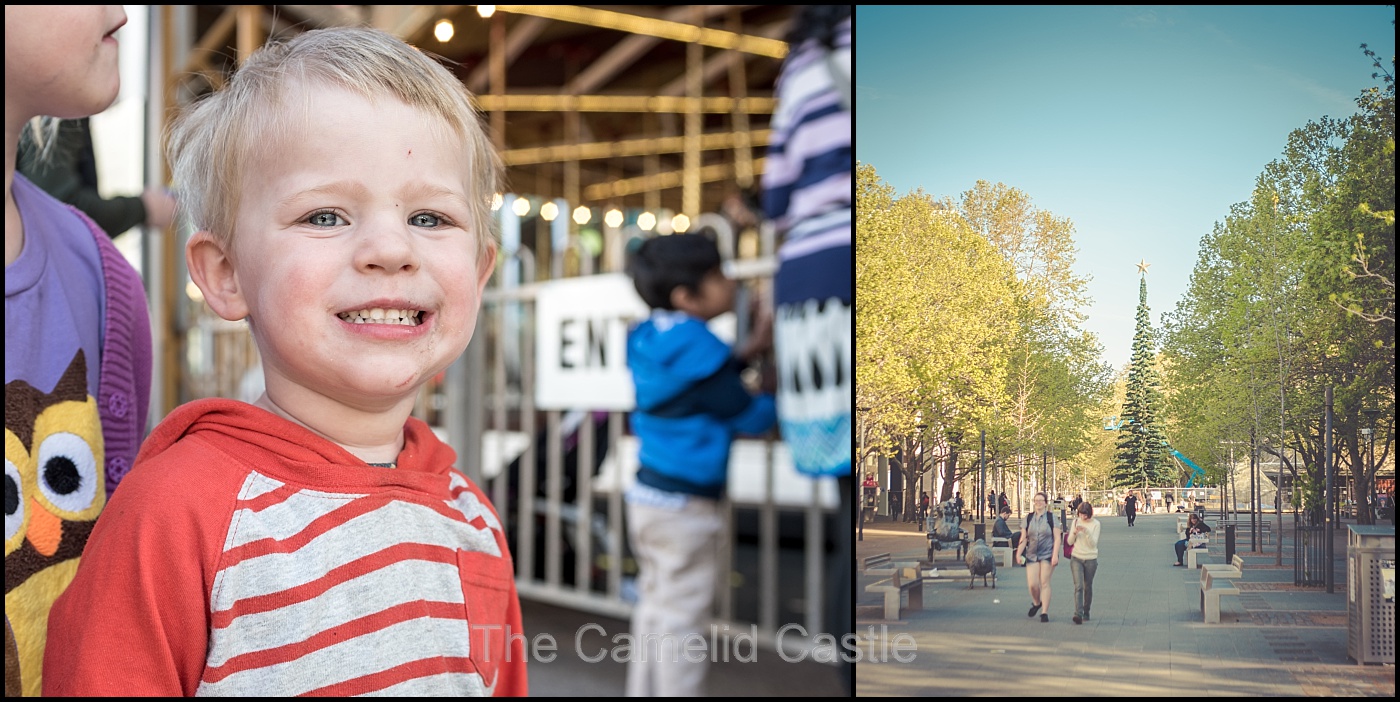 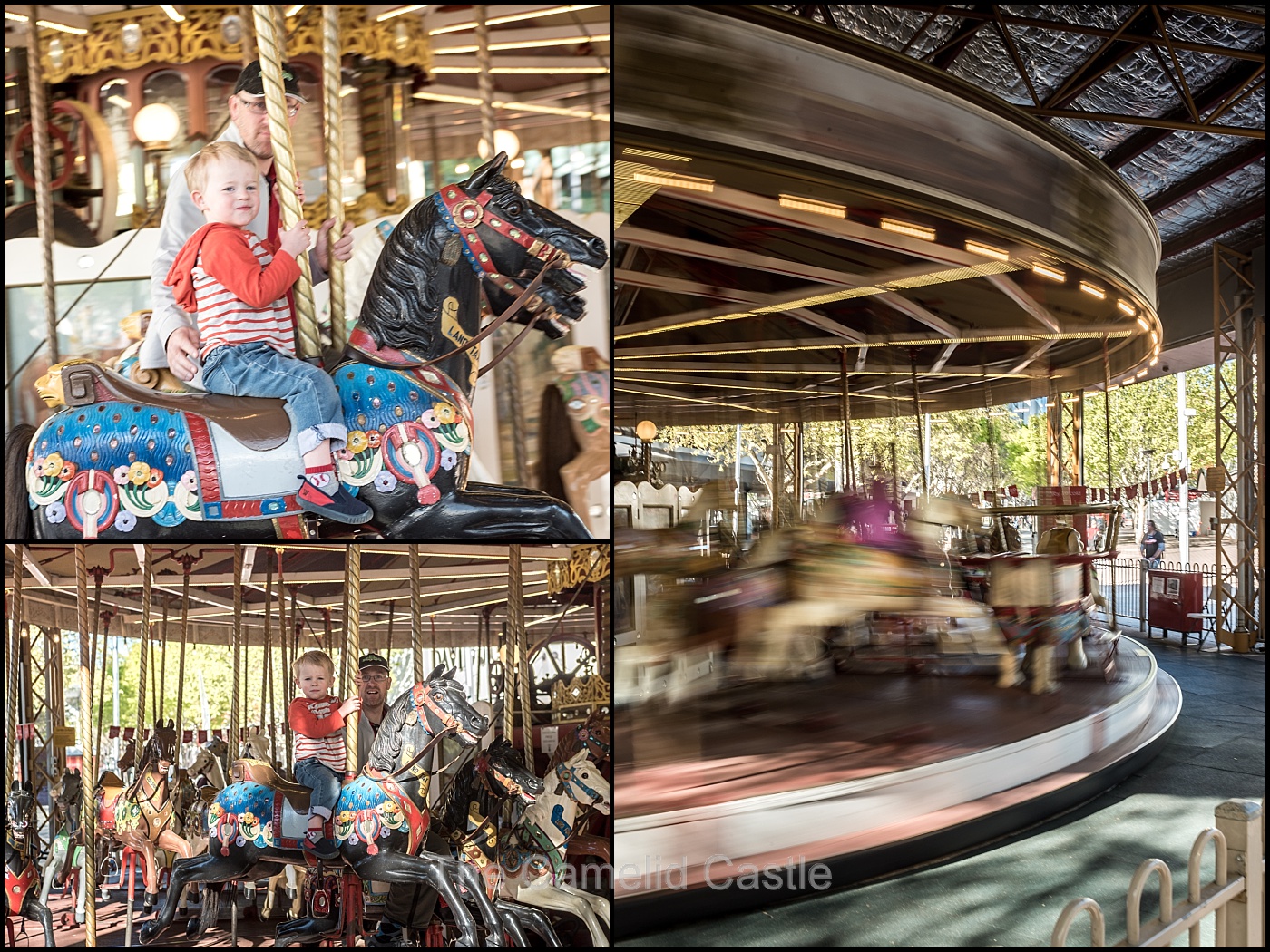 It was a pretty quiet afternoon on the merry-go-round and the kids got a super-long ride, bonus!

Finally, it was Saturday…….. cake day! As usual the hard-working cake-elves (aka Nic and Anto) were up late, powered by coffee and wine, whipping up an alien cake fit for a third birthday. 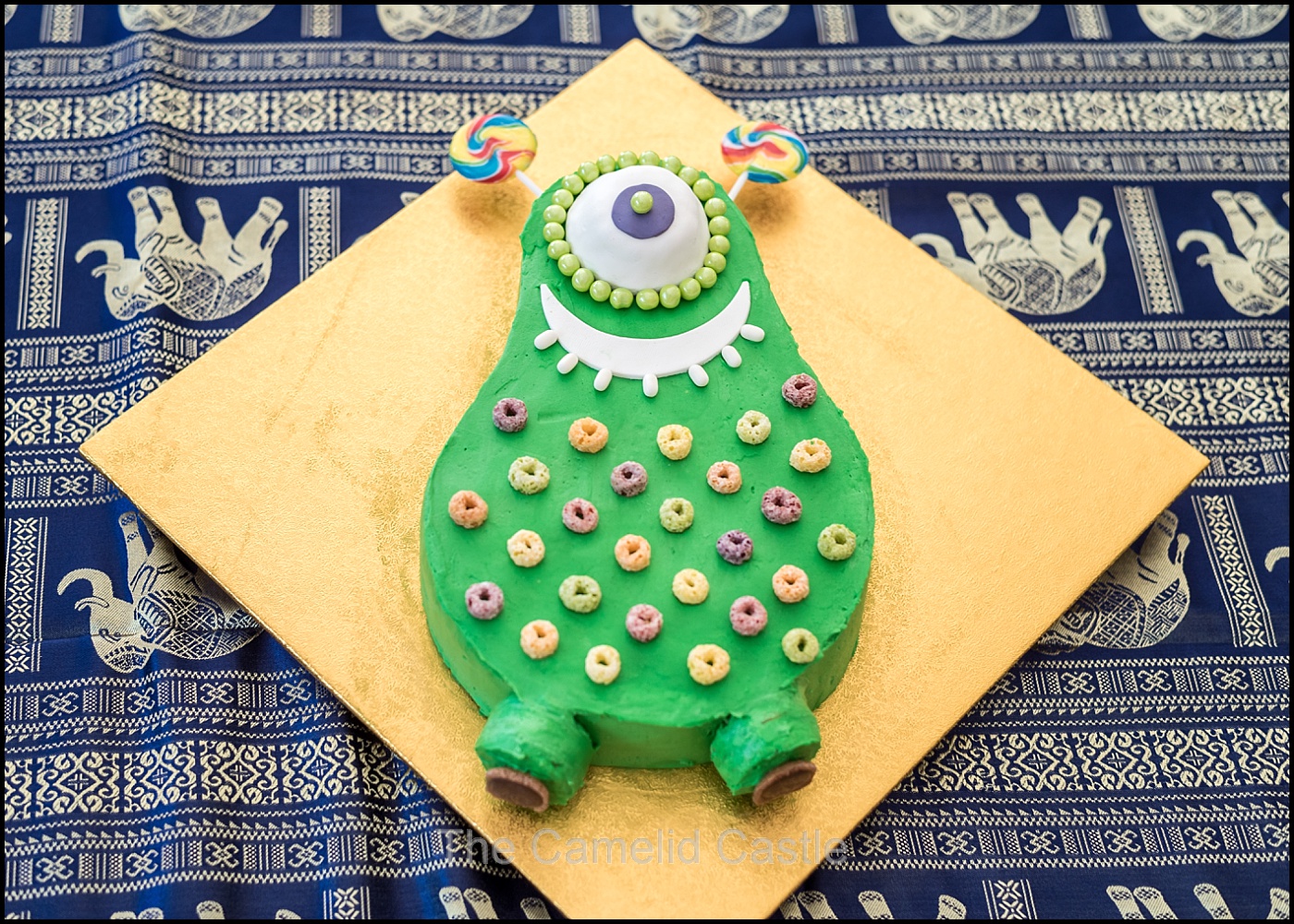 After his second birthday ‘under the sea‘ extravaganza and Astrid’s ‘rainbow explosion‘ earlier this year, it was a small family party this year for Søren.  Small party or not, the excitement level was through the roof and finally the afternoon arrived and it was time to get into our party clothes….. 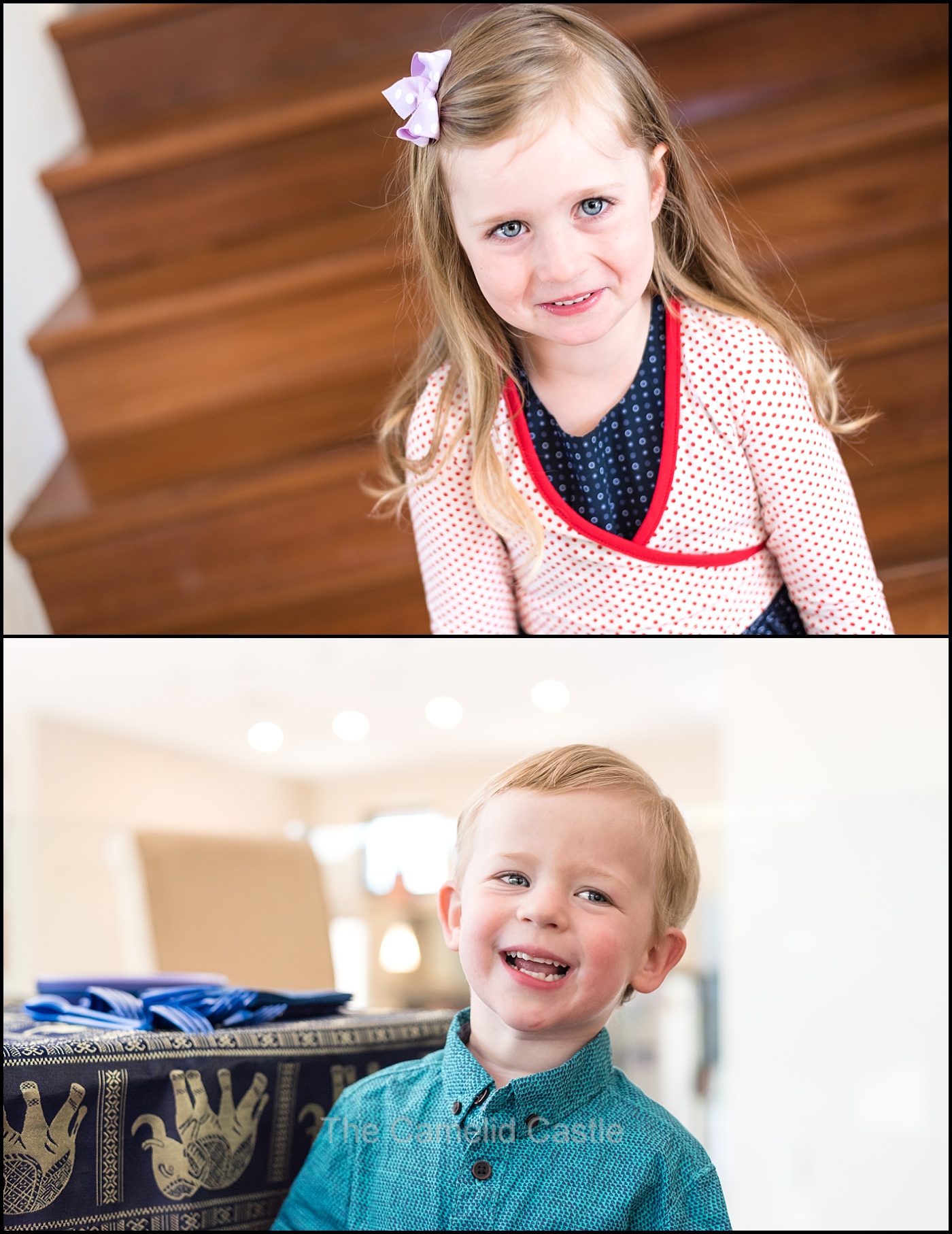 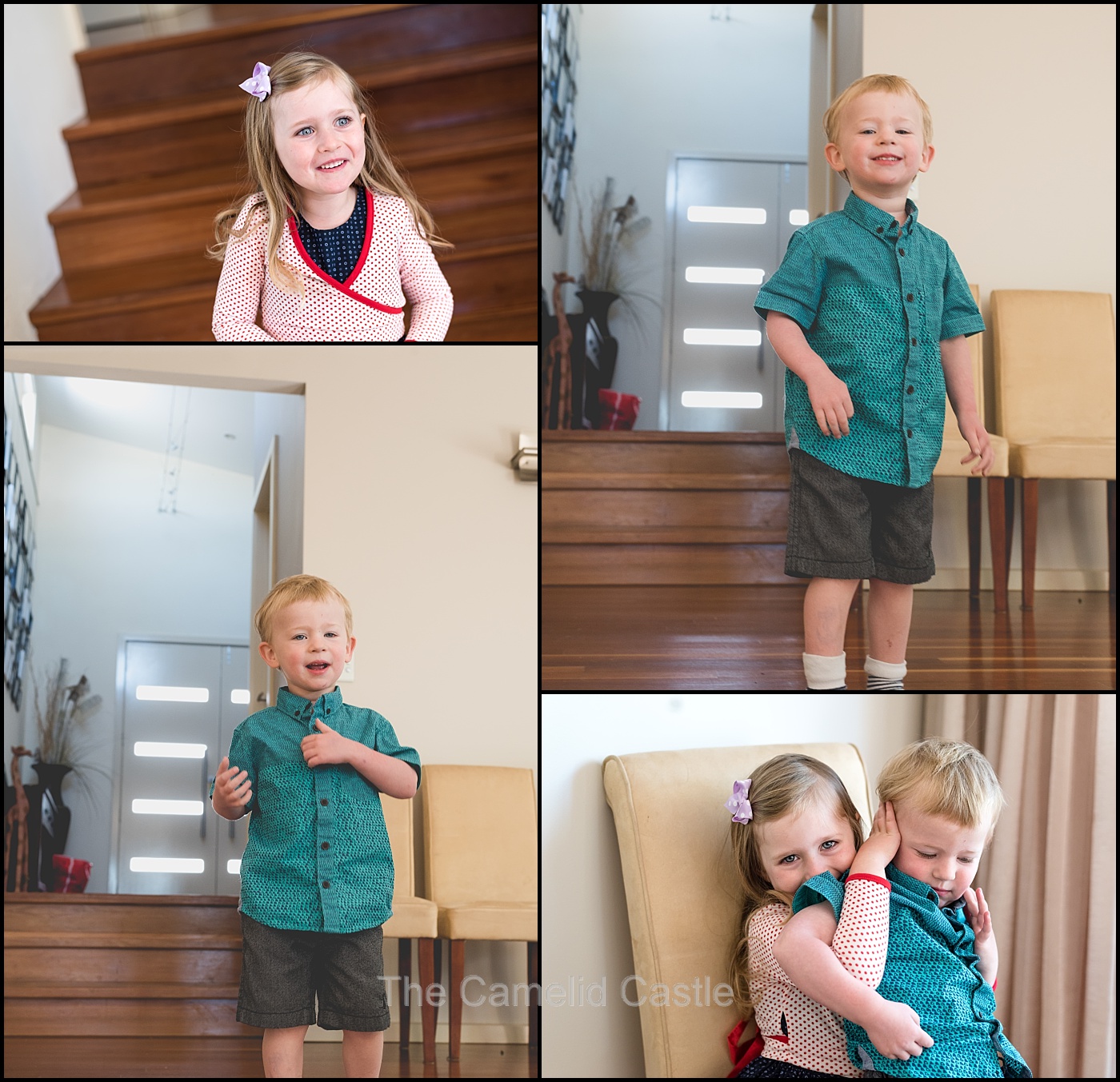 Søren had decided that he wanted an alien cake, and some jelly and fairy bread, so that is what he got! Of course  I’m totally incapable of doing a low-key party so there was a heap of food. Yes this is my ‘no effort party’……. 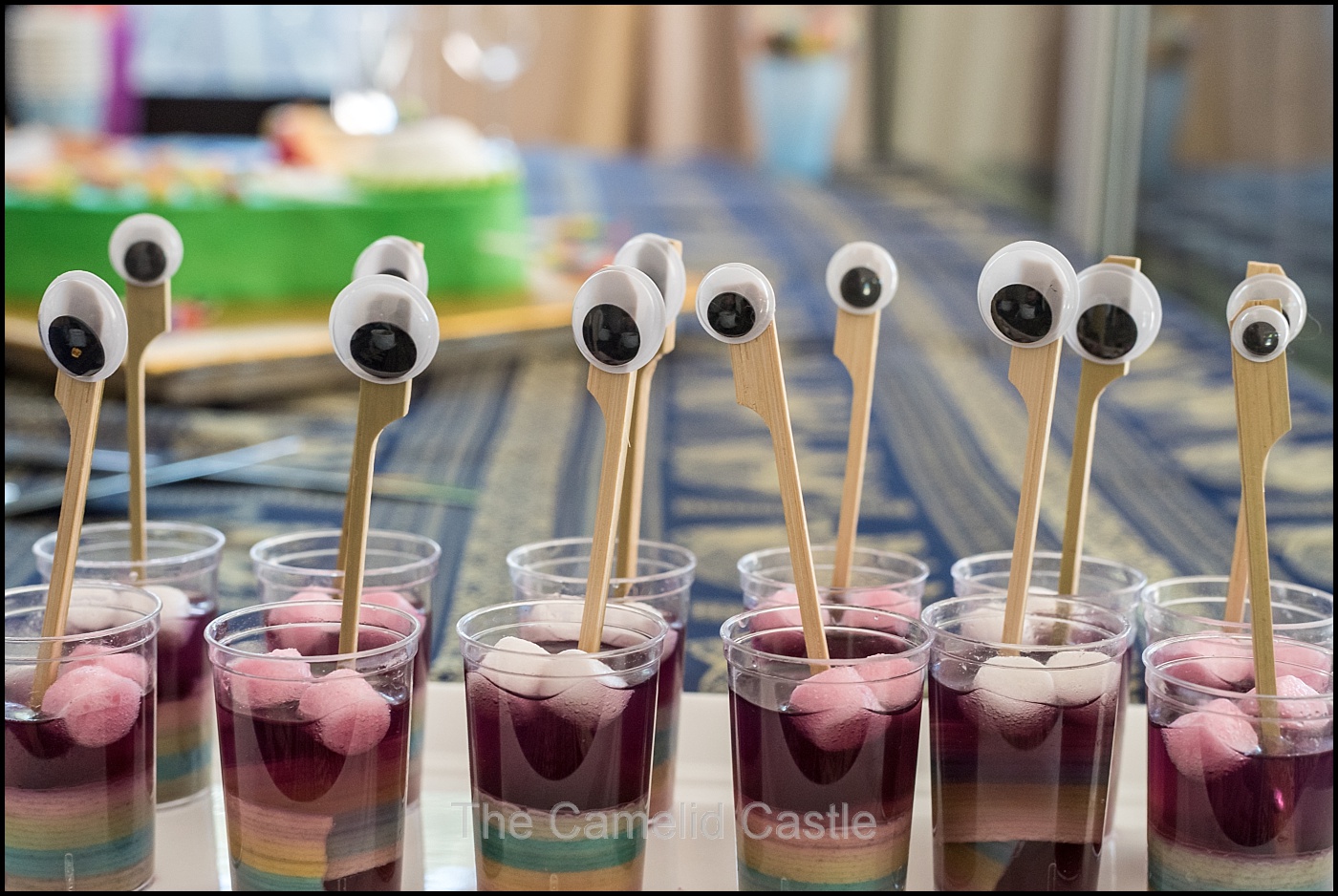 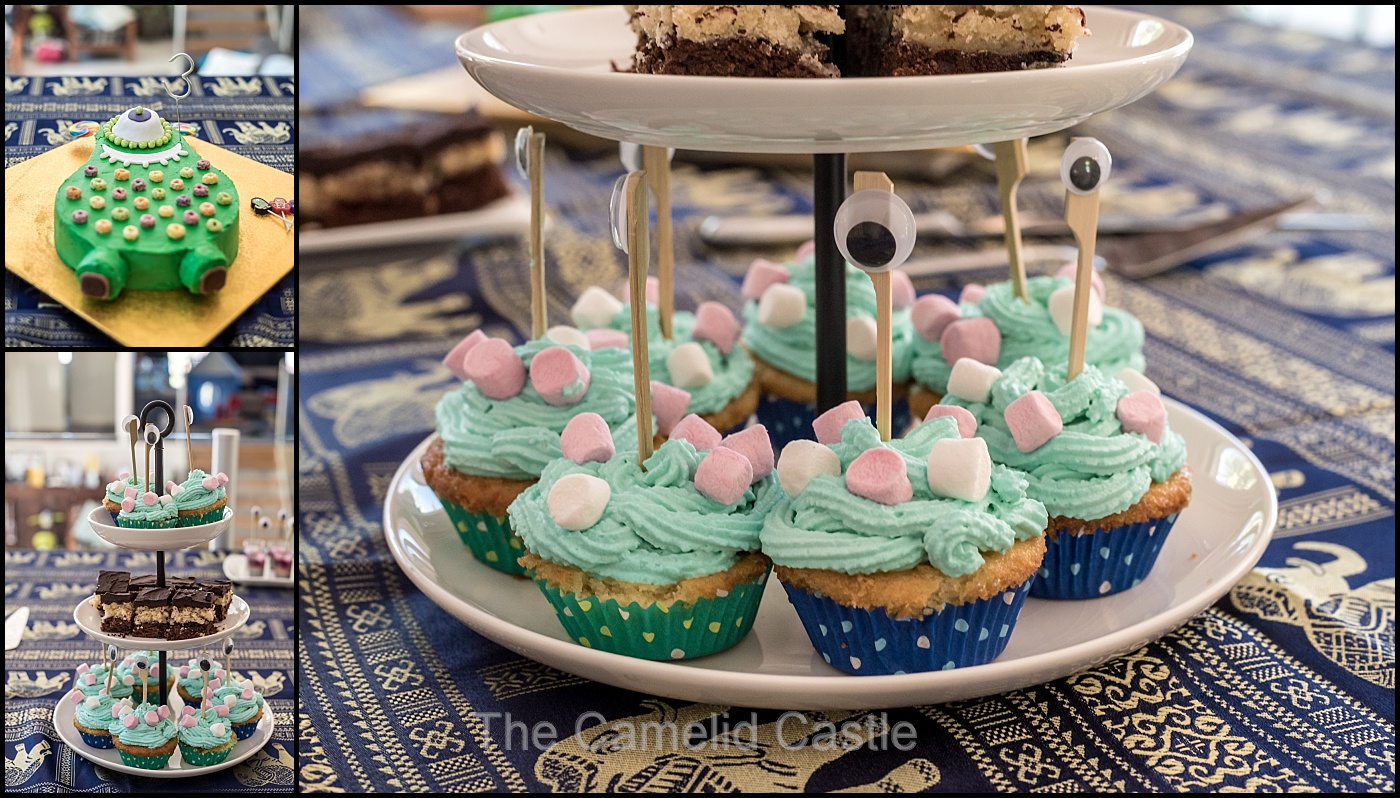 It was a beautiful Spring afternoon and the kids had a ball eating and playing outside.  Of course there were even more presents for a spoilt Søren. He is a present master now, and needs no encouragement to rip paper off….. 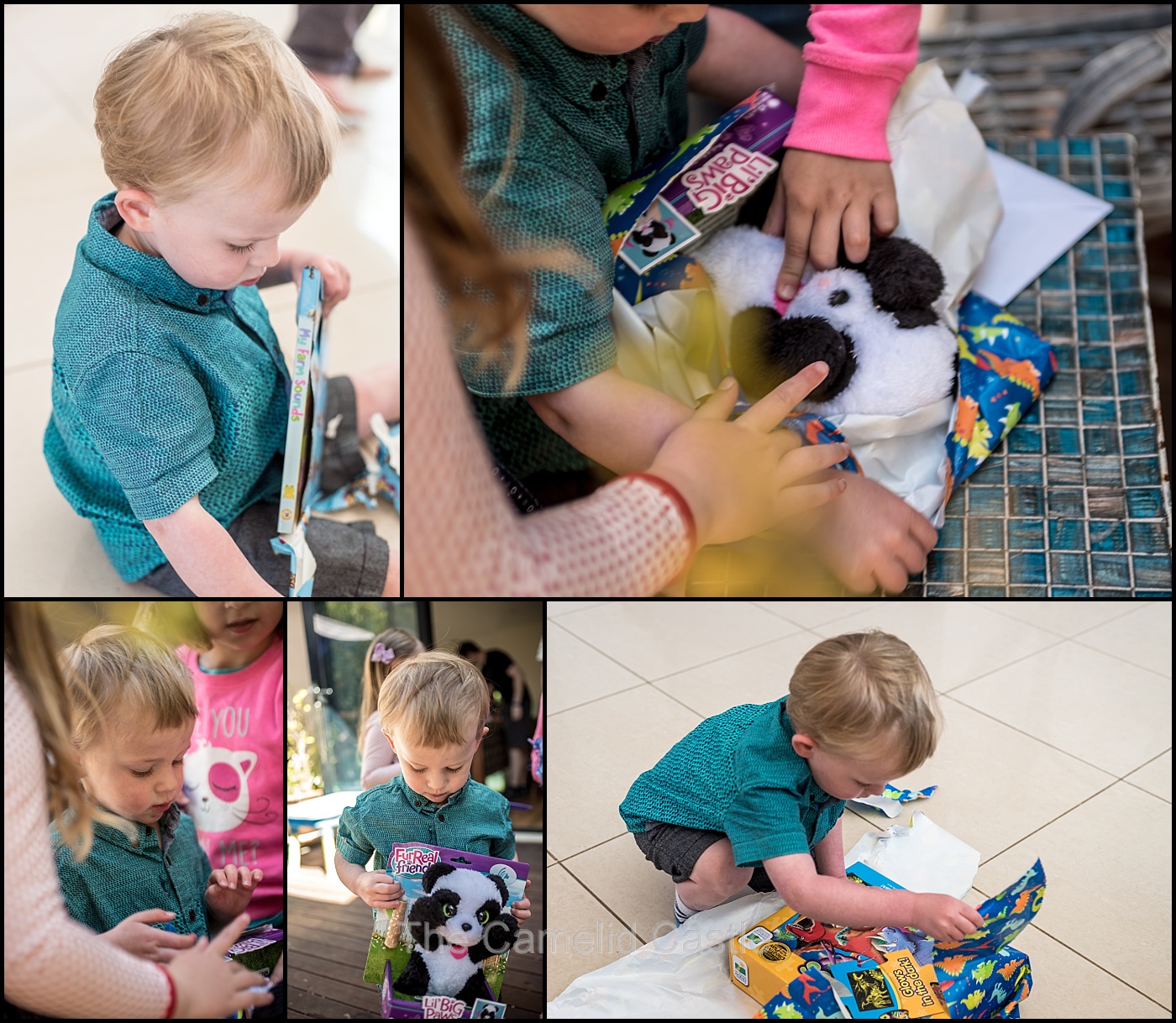 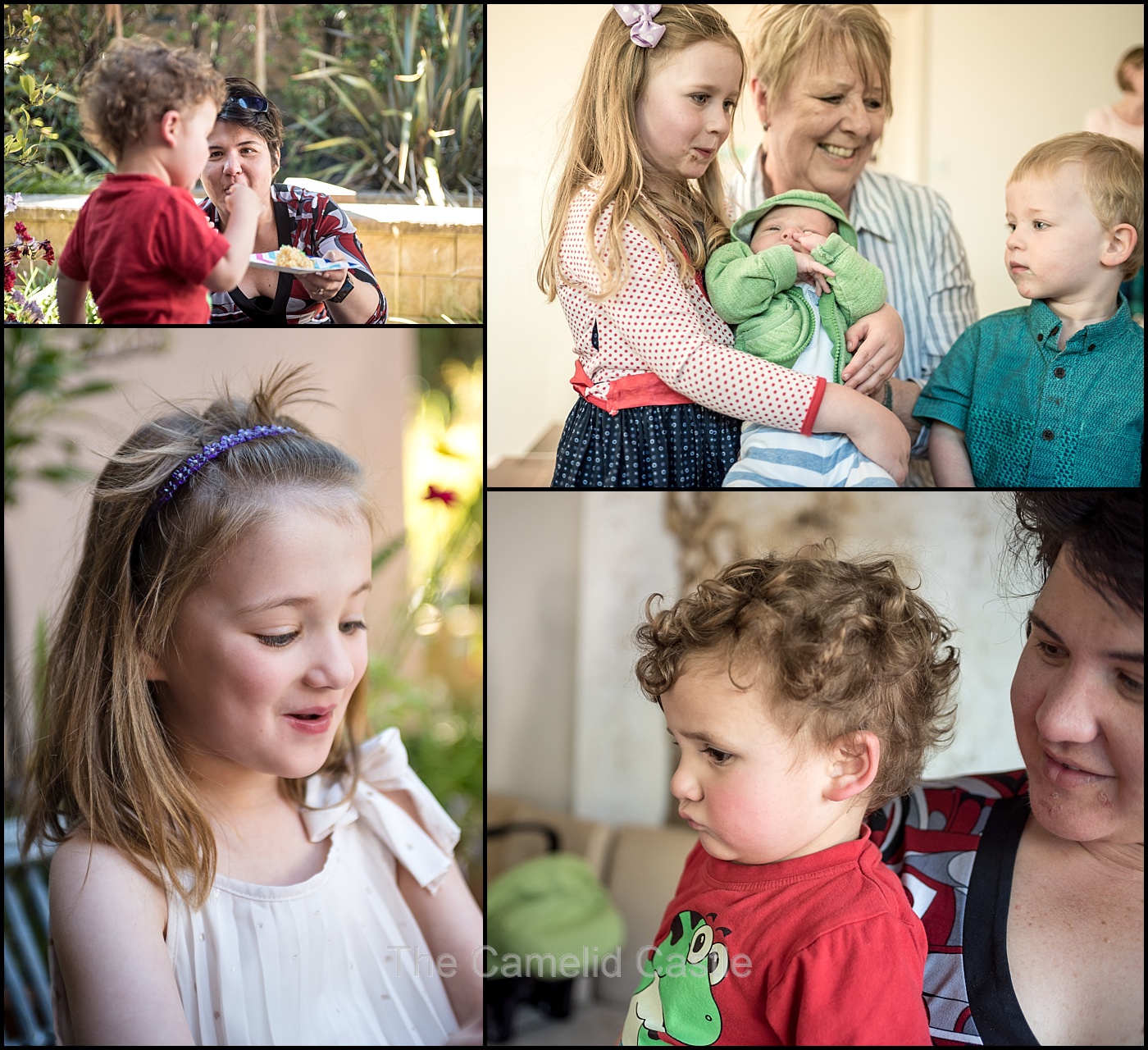 Finally it was time to blow out some alien candles and tuck into that alien cake. Søren is a candle blowing expert (aren’t all kids?). 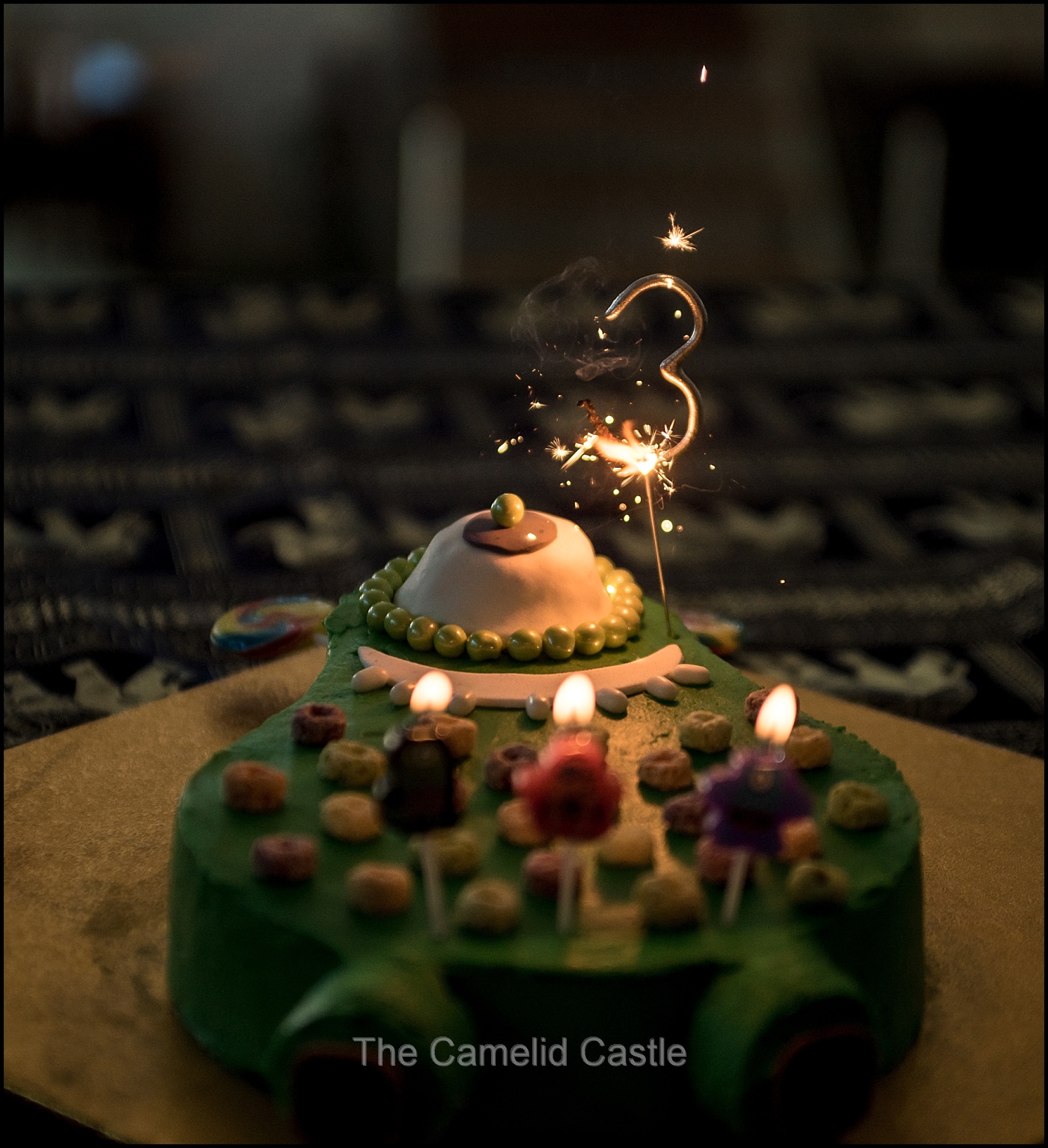 Once the cake was cut, the kids were into cake round  3 or 4 for the afternoon! You can never have too much cake, and that alien was pretty tasty (and very green)….

After a lot of food, a lot of presents and lots of fun the third birthday extravaganza was over.  We had one happy 3 year old Søren and 2 exhausted parents! 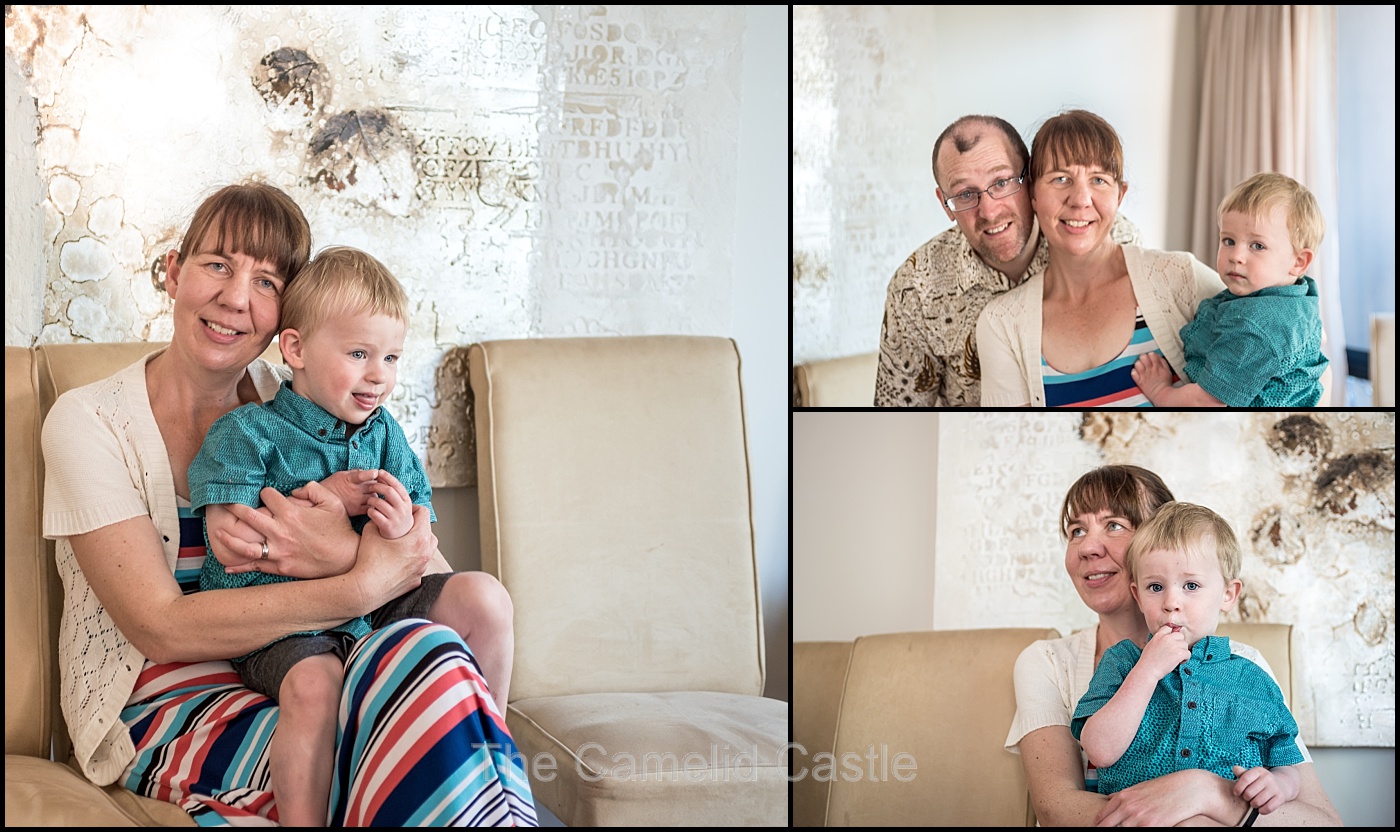