Bright and early, well before 6am, we were up, dressed and the bags were loaded in the car and we were off to the airport for the start of our 5.5 week adventure.  Our trusty taxi service, Trevor, had us at the airport before sunrise, and we managed to escape the house without any of the animals escaping! They were pretty suspicious of the luggage and pre-dawn activity and the extra pats and treats from the kids.

We had a long day of travel ahead, with flight to Sydney and then onwards to Singapore.  It happened to be Anto and my 11th wedding anniversary. Spending the entire day on a plane isn’t the ideal way to celebrate, but we hoped that the time change meant that we’d still have time for a swim and satay dinner that night with the kids…… if we managed to get some rest on the plane!  We had spent the first part of our honeymoon in Singapore 11 years earlier, so it was kind of nice to be heading back once again.

The very excited kids tucked into breakfast at Qantas club while watching the sun rise. Between our travel and Anto’s work travel we seem to be regular visitors these days and they know where everything is! 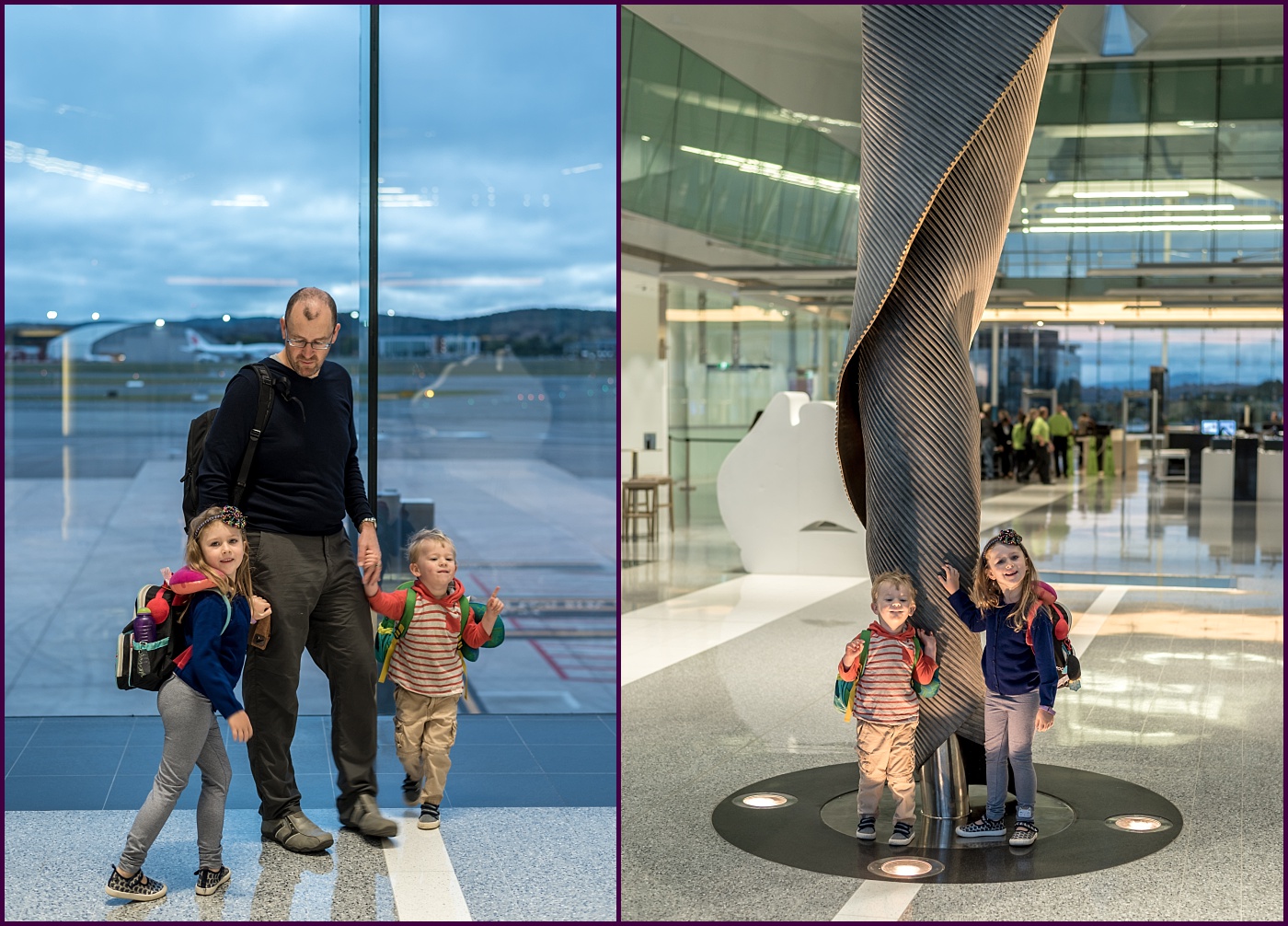 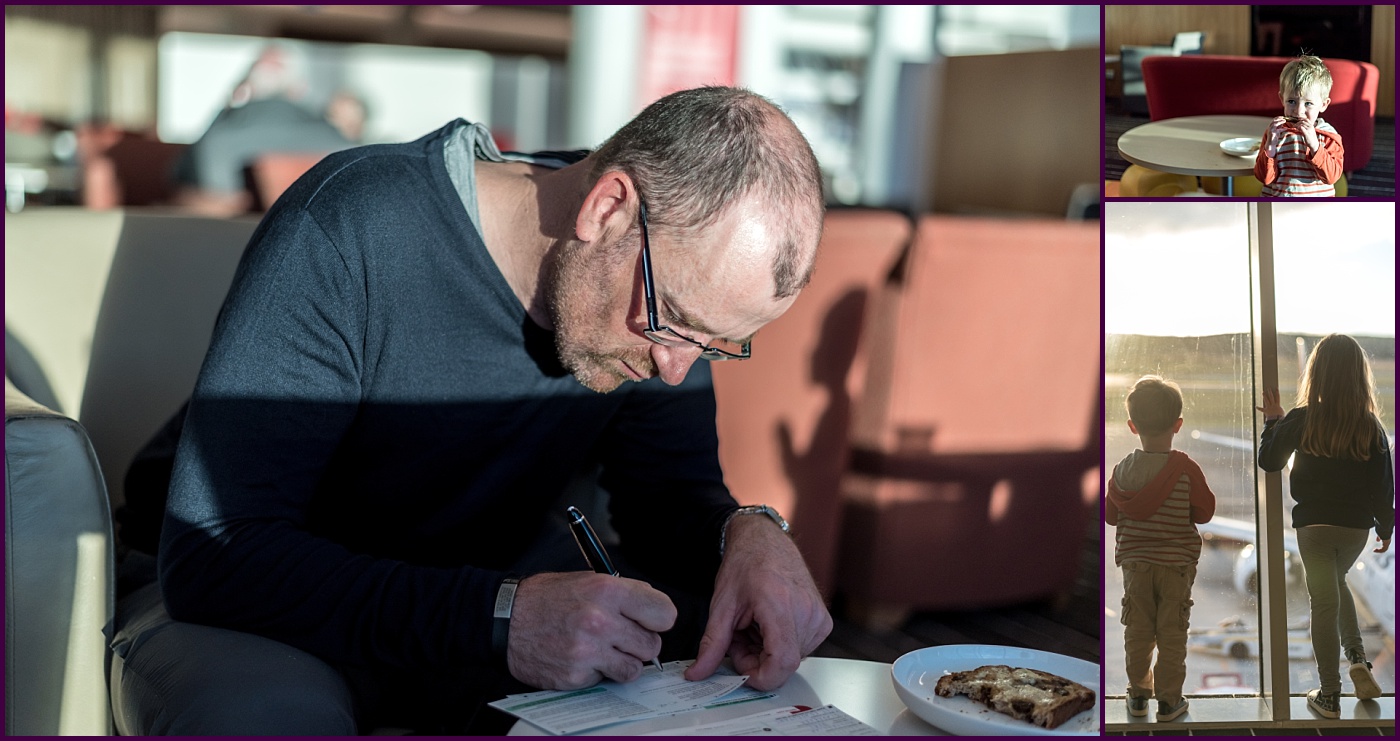 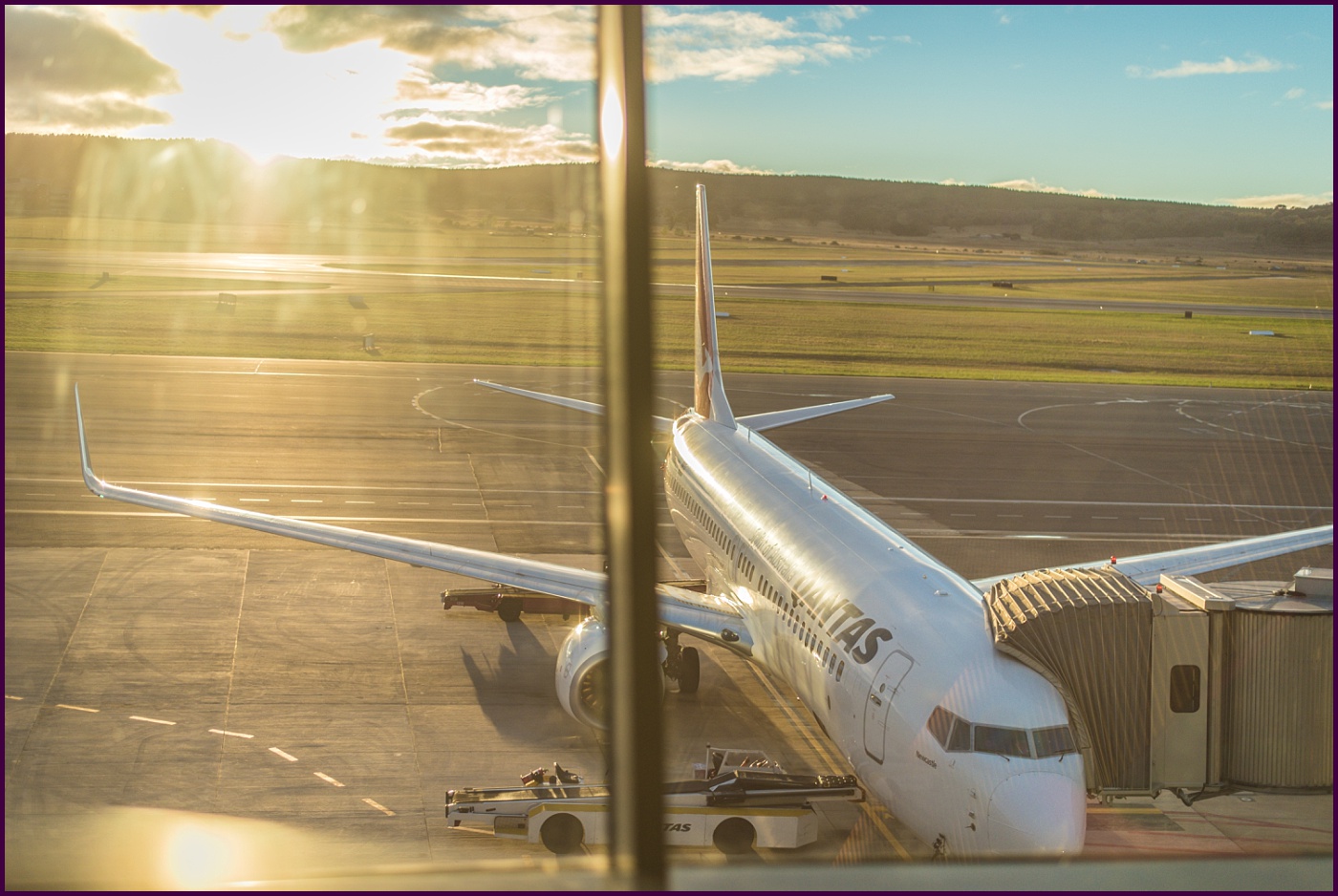 Before long we were off to Sydney. It was an uneventful, and for once not turbulent, flight.  We managed to speed through the terminal change and immigration and had gotten word that my Dad (who lives on the Sunshine Coast) had managed to get on an earlier flight into Sydney that morning. He happened to be flying to South America on the same day as we were heading to Singapore so we fortuitously managed to meet up once we both cleared immigration. Anto’s work travel has boosted his Frequent Flyer status enough that we even had no trouble getting my dad into Qantas club.

The kids were happy to feast on more food, play with the toys and get a quick catch-up with Gramps.  The adults had already been awake for too long so tucked into more coffee!  At this point our flight to Singapore had been delayed by an hour.  Originally the transfer was tight, so we weren’t all that fussed about extra eating time, but it was making for a long day.

As we both had flights to catch in opposite directions it was soon time to say farewell to Gramps, as we headed onto our plane. It wasn’t a full flight and Anto and Soren even scored a spare seat next to them! Long-haul day-time flights with kids are never fun, but having been there and done that several times now we knew we were in for a long day.  The kids had promised to sleep so we could fit in that swim and satay later in the day but they aren’t great at sleeping on the day time flights.

The 8 – odd hours of the flight didn’t exactly zoom by but we managed to pass the time with plenty of movies, playing on the tablet, eating and homework for Astrid.  Both kids did nap as requested, but neither managed more than an hour. Anto and I managed even less sleep as a resul,t and after several nights with less than 5 hours sleep due to the usual pre-trip run around we were all very tired before the flight even landed!

Due to the 3 hour time-change and the late departure it was already past the kids bed time before we even got off the plane. We then managed to have one of the slower immigration experiences of recent times (not quite up with the KL experience from last year that lasted well over 1.5 hours) but there was a lot of standing around in lines with increasingly tired children. 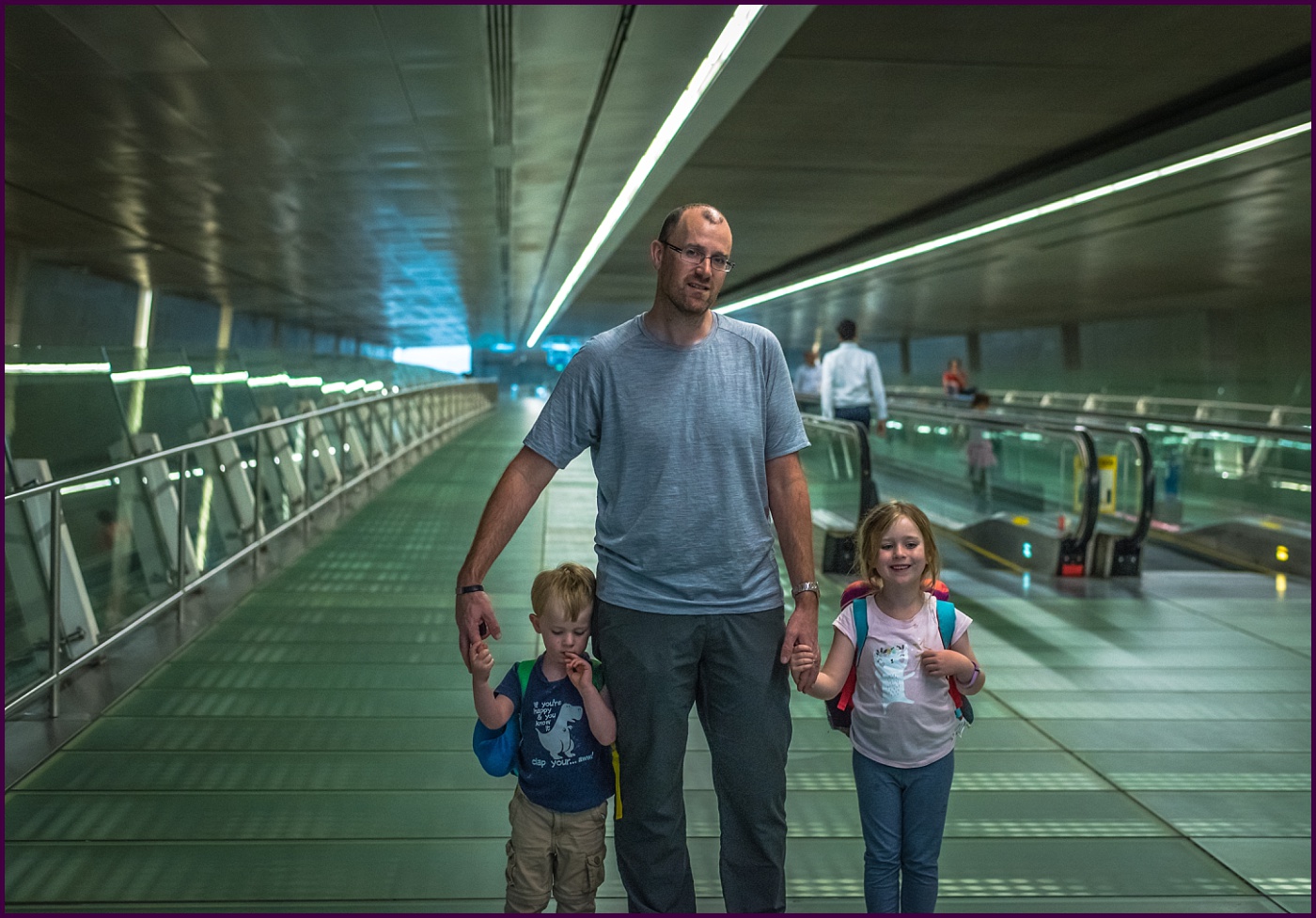 Finally officially in the country, and luggage collected, we had to stop by the MRT office to obtain a transport card for Astrid. Anto and I have our cards from our previous visits, but Astrid is now tall enough to need her own.  Apparently kids over 90cm require a card, but still get free transport.  Both kids are in fact over 90cm but Soren was deemed to not need one, first by an official ‘eyeball test’ and then by a second person who verified he was under their counter height.  We weren’t arguing with them, and with Astrid’s card in her hand  we were off, dragging our luggage and onto the MRT.

It was around an hour and 3 MRT’s to get to our hotel. If we were willing to walk with our bags in the hot streets for a couple of kilometres, rather than a couple of hundred metres, we could have cut out at least one of those changes, but walking through train stations, with lifts to move bags, is vastly easier and cooler, if not quicker.

We eventually reached our hotel a bit after 7pm local time, which unfortunately was around 10pm Australian time.  This was a fair bit later than we had hoped and any hopes of a nice swim and dinner out were rapidly fading as the kids were way past their best.

The day went further downhill when we upon check-in at our hotel (some 5 hours after check-in time) we were informed our room was not ready and asked if we would like to wait.  The grumpy and tired kids (and adults) were not impressed as we were ushered into the foyer.  After around 20 minutes someone came and informed us that there was a problem with our room and they would give us a temporary room for an hour until our room was ready.  With little choice we figured this would at least give us a chance to give the kids a shower while we sorted out something for dinner. This is what two very tired kids look like when waiting for their promised hotel room…….

Our original plan of a swim followed by heading into the Satay Hut was definitely a no-go now it was several hours later than we had hoped to arrive.  Both kids were requesting bed (never a good sign), but the plane snack dinner was many hours prior, and they needed food. Besides, the temporary room didn’t have enough beds for us all so we were going to have to move them anyway.  We were staying in the Parkroyal on Kitchener Road, this is in the heart of Little India and we had scores of food options on the doorstep. This meant we could stumble out the hotel door and find something to eat.

With little energy or inclination to go searching we pretty much went into the first restaurant that smelt good.  It was now after 9pm local time (midnight body clock time) and neither kid was keen on eating but we ordered some curries and naan and convinced them they should give it a go. 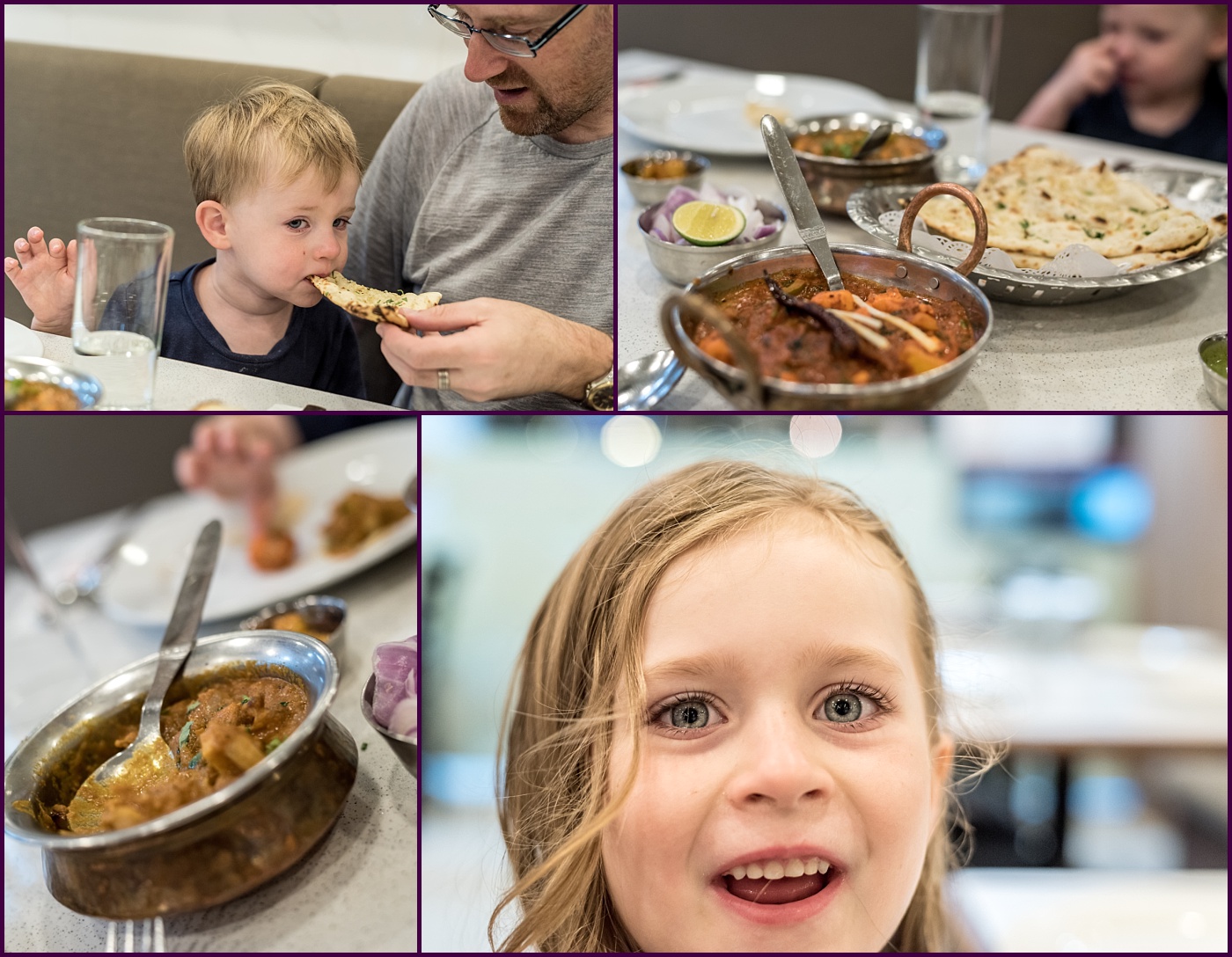 Both kids are pretty good eaters but we’d forgotten that the curries were likely to be much spicier than at home. Anto and I like spice and they were making our eyes water, so the kids pretty much ate naan bread and rice and mostly tried to sleep on our laps! Eating dinner at that time of night was not ideal for any of us.  They were some pretty impressive curries and we wished it was several hours earlier so we could have actually enjoyed them!

Back at the hotel, it was now approaching 10pm and apparently our room was still not ready.  Back up to the temporary room and both kids were flaked out and ready to lose the plot.  Anto decided to go and see what he could do and eventually reappeared with a more helpful and apologetic staff member, who had chased up our room and was ready to move us.  He saw the poor bedraggled kids and offered them a ride on the luggage trolley, which perked them up no end! 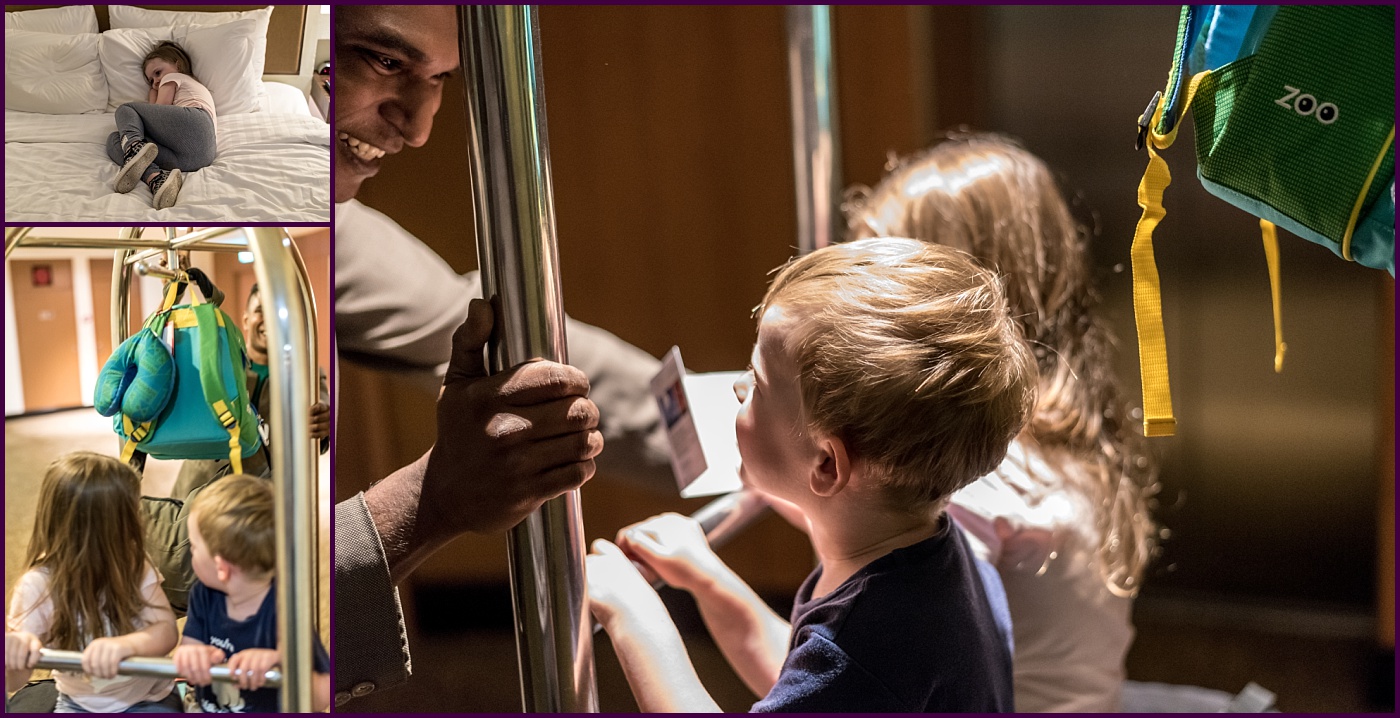 Finally in our room, well after 10.30pm, the kids collapsed unconscious in about 30 seconds flat.  After a very long day, I retreated to the shower to discover there was no hot water!  Given I was exhausted and smelly, I was pretty much ready to cry but decided to suck it up and have a cold shower since there was no way we were moving rooms again that night.  Anto was similarly unimpressed with the cold shower and our views on the hotel did not improve when about 10 seconds after our weary bodies hit the bed, an industrial vacuum started up just outside our room.  Annoyed, but too tired to care, we figured our list of complaints in the morning was going to be long.

It turned out to be a very uninspiring wedding anniversary, pretty much nothing had gone to plan!  Luckily we were on holidays and would wake up in Singapore the next morning, so it definitely wasn’t all bad………

Our plans for the next day involved an awful lot more fun and far less sitting around on planes (and definitely less dramas with the hotel!)…….

Up next, exploring Little India and Gardens by the Bay……