After less than a week away it was time to add another country to the list! We were heading to Estonia in the afternoon via the ferry across the Gulf of Finland.  Apparently we still weren’t over the jet lag (something to do with multiple time zones in a week, perhaps?) and were all up by 5.30am, which was again going to make for a long day. We were getting better with the sleeping in thing, but it still wasn’t ideal. It did mean we were down to breakfast when it opened at 6.30am.  Just in time to annoy all the business people heading off for their day of work…..

Again the breakfast was really good and we all enjoyed the local Finnish specialties of pastries, cheeses and rye bread. I’d resigned myself to having to eat my fill of karjalanpiirakka (the Finnish pastry you eat with egg butter) as we were leaving Finland later that day. Luckily when it’s cold outside there is an excuse to eat lots of breakfast!

During breakfast we checked the weather and it was minus 5 with an apparent temperature of minus 9 outside, so we were not in a hurry to go out. After breakfast we did a quick repack and an explore of the hotel and let the kids play in the hotel play room for a while, which they loved. Apparently dress-ups and train-tracks are great while your parents drink more coffee and contemplate the day ahead.

We had another quick look in the lounge and exhibition cells of the hotel. It was certainly an interesting place to stay and had some of the comfiest beds (bar the Sofitel) we’ve stayed in.  I am glad we were not guests of the group cells or isolation cells though!  Just to give you an example of how weird the Finnish language looks, we laughed every time we saw the below sign in the lift.  Most languages I have some hope with figuring out context and reading signs. Finnish, not a chance! 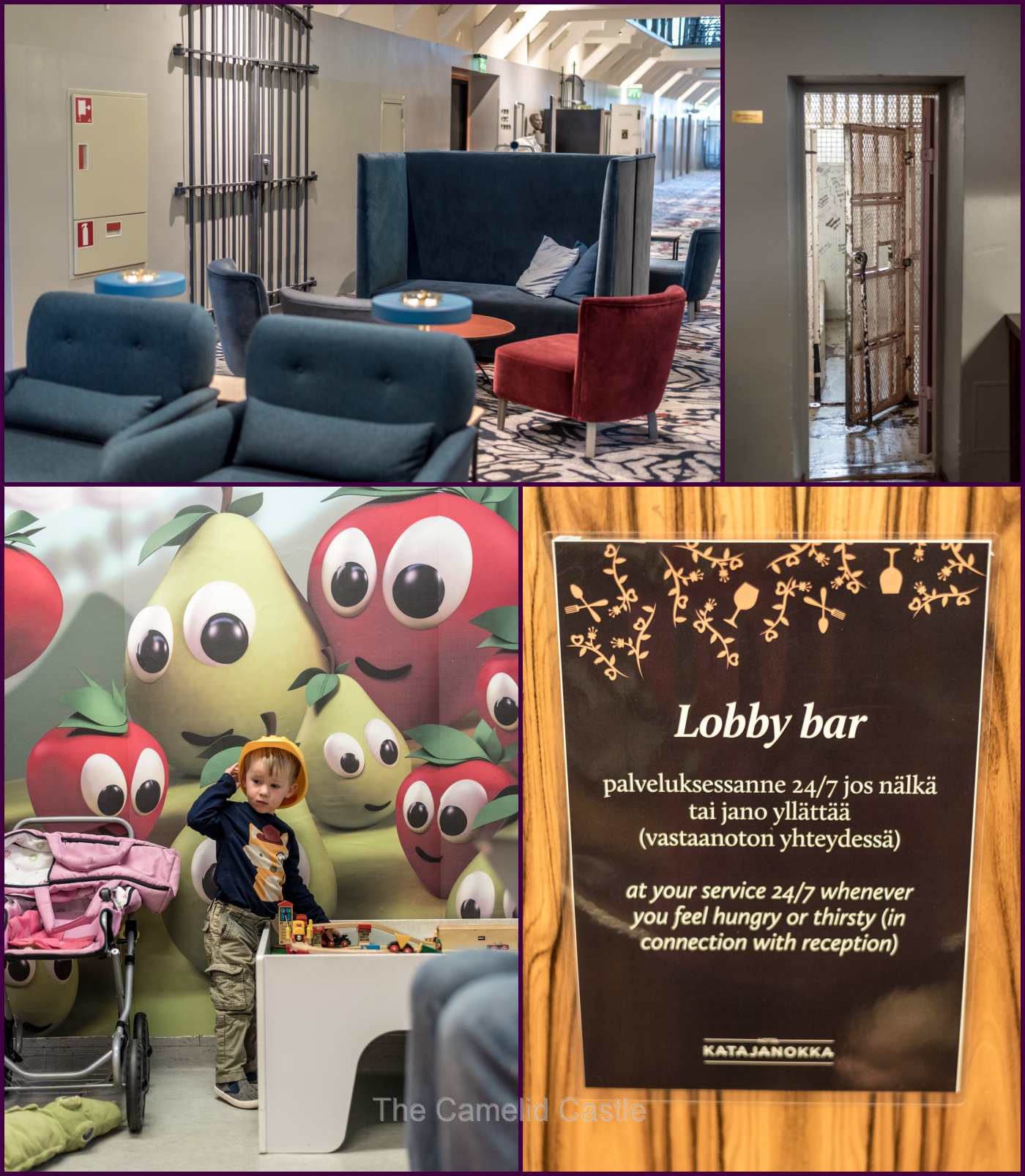 Eventually we had to head out into the cold.  We caught the tram into the city and decided to have a walk around an area we’d been through plenty of times on the tram but had never walked. The kids had also requested to go and see an ice skating rink they’d spied the day before. 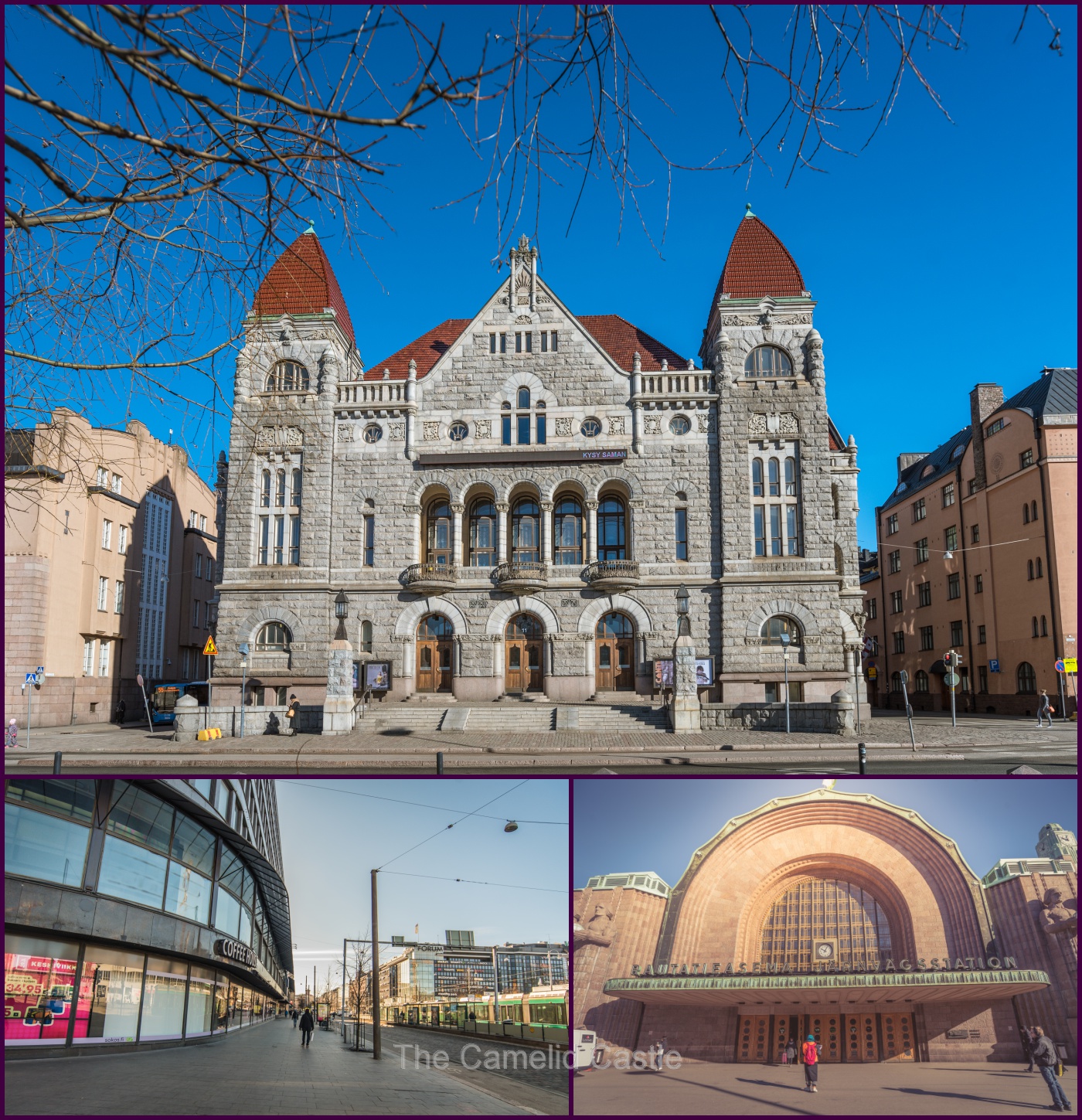 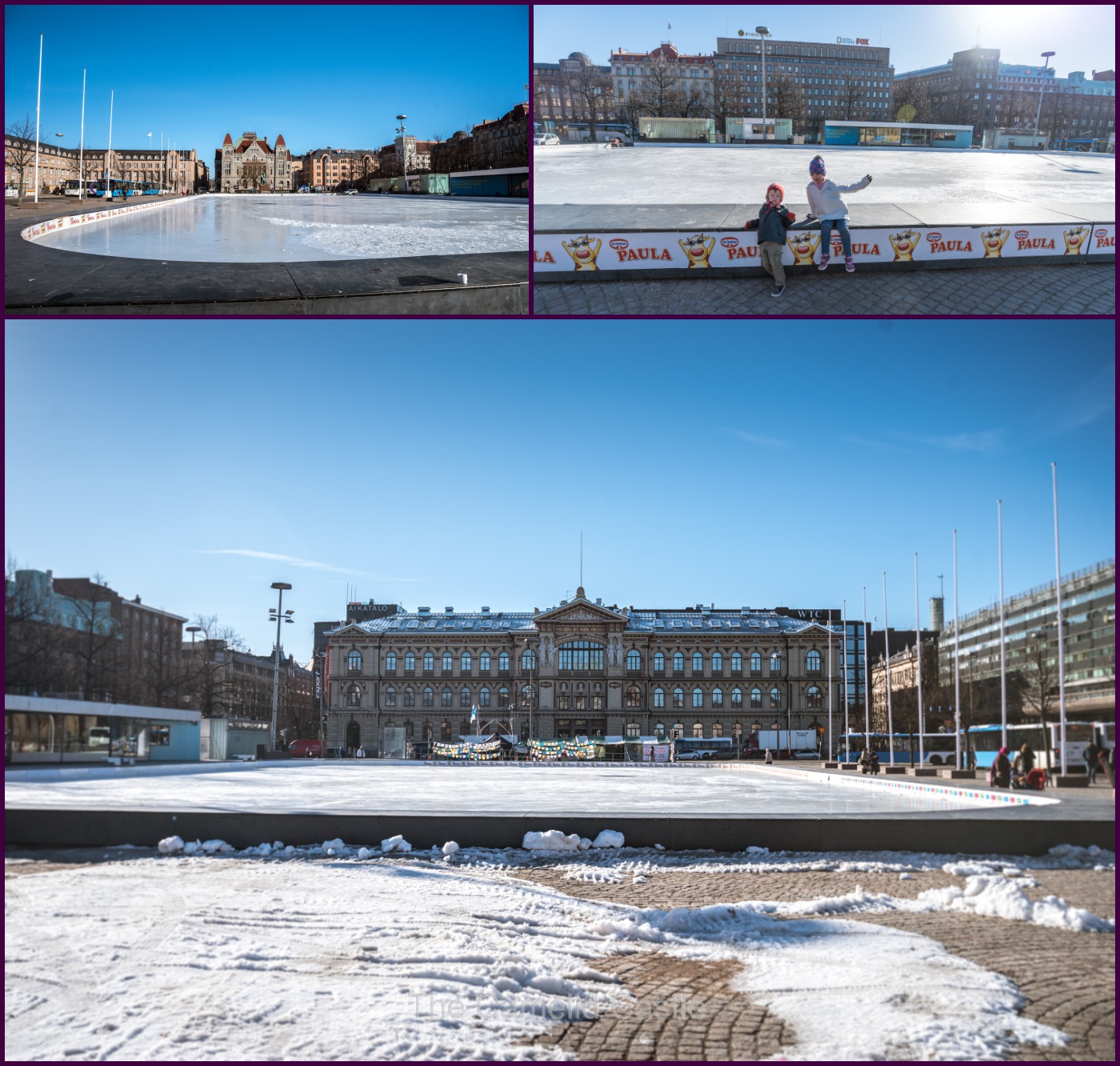 Despite being technically spring, there was still plenty of snow and it was not hot! Helsinki doesn’t have the same old town feel of many other European cities but it was quite interesting to explore.  You can definitely see the Russian influence in a lot of the architecture. Some areas are quite similar to Stockholm, which is not surprising given it was part of the Swedish realm until relatively recently.

We found a few more interesting buildings and about a thousand coffee shops.  It was cold out of the sun so we walked back towards Esplanadi park which had briefly visited on our first day. 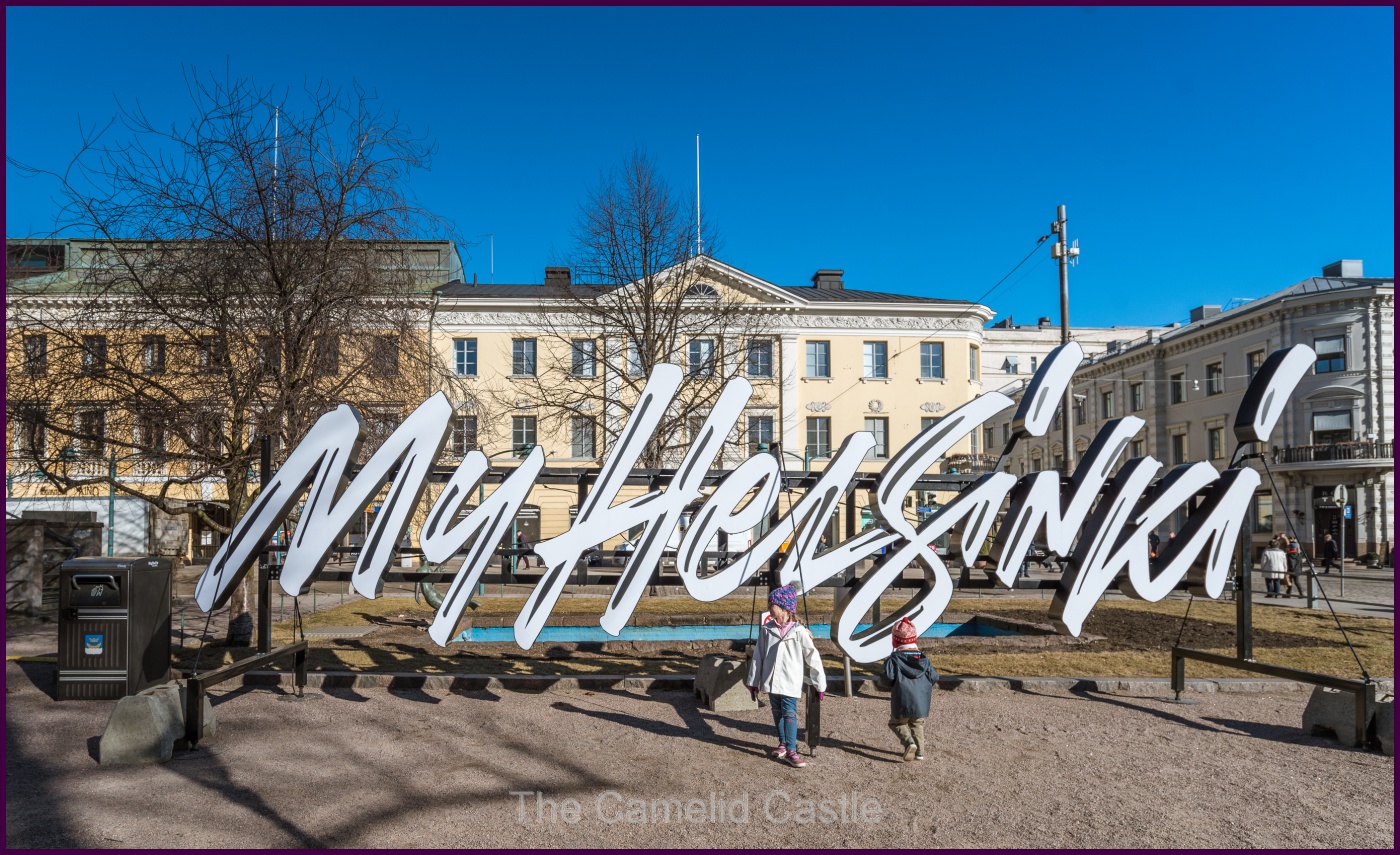 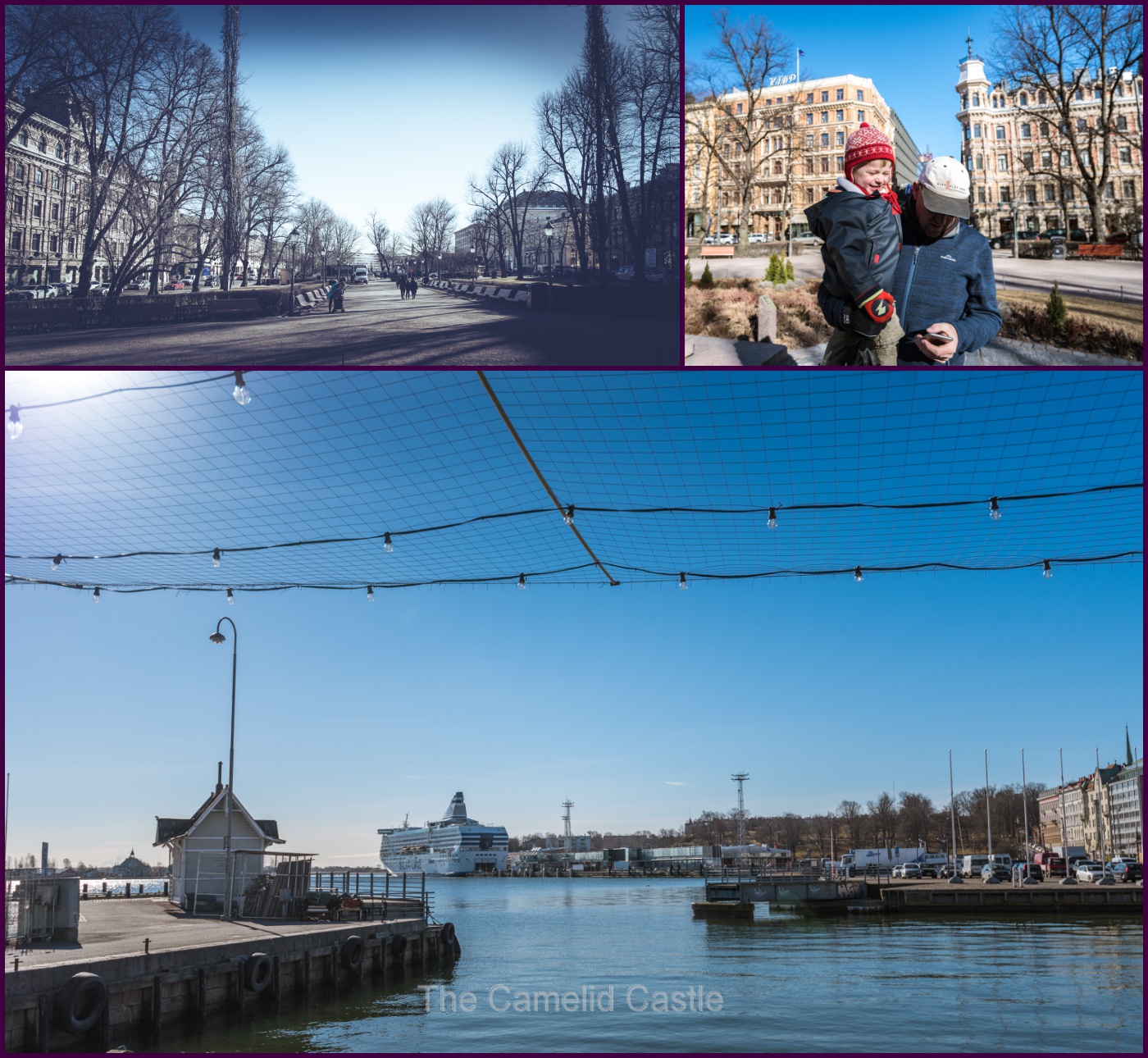 One of the strange things (for us) that we saw during our stay in Helsinki, was the political advertising everywhere. The municipal elections were being held in early April and you’d see these boards everywhere.  Even weirder were the constant (professional looking) ads on all the trams, both plastered on the sides of trams and one the screens inside.

Now pretty familiar with the tram routes we found our way back to the closest stop after our morning wander  and headed back to the hotel.

We’d booked on the 1.30pm Tallink ferry to Estonia so had to be at the ferry terminal with an hour to spare.  There are multiple companies that run crossings between Helsinki and Tallin so the options for getting to Tallin are vast and there are plenty of affordable options. The Viking-line and Silja ferries seem to dock pretty close to our hotel but of course we had decided to use Tallink (Estonian), and the Talllink ferries depart from the new terminal on the other side of the market area……… 2 trams away.

Even with our luggage and it being lunch peak hour it was a pretty easy transfer which involved minimal walking.  We have to say that the public transport in Helsinki was pretty efficient and easy.  If you are staying in Helsinki we’d recommend buying the public transport cards to cover your stay as it was worth the cost and saved a lot of walking (especially in the cold).

We made it to the Tallink ferry terminal well over an hour before our ferry was due to depart and people were pouring in.  We’d only booked the tickets the day before online, and we could check-in via a machine and using a previously provided code (again we didn’t need to talk to anyone). All checked-in it was upstairs to the brand new terminal (obviously just opened as it wasn’t quite finished) and we spied our boat coming in.  The ferries are huge and take cars, trucks and a lot of people. Cabins are available on the crossings to Tallin but given the length of the trip not really necessary. Tallink runs about 8 crossings a day so it was easy to find a time that suited. 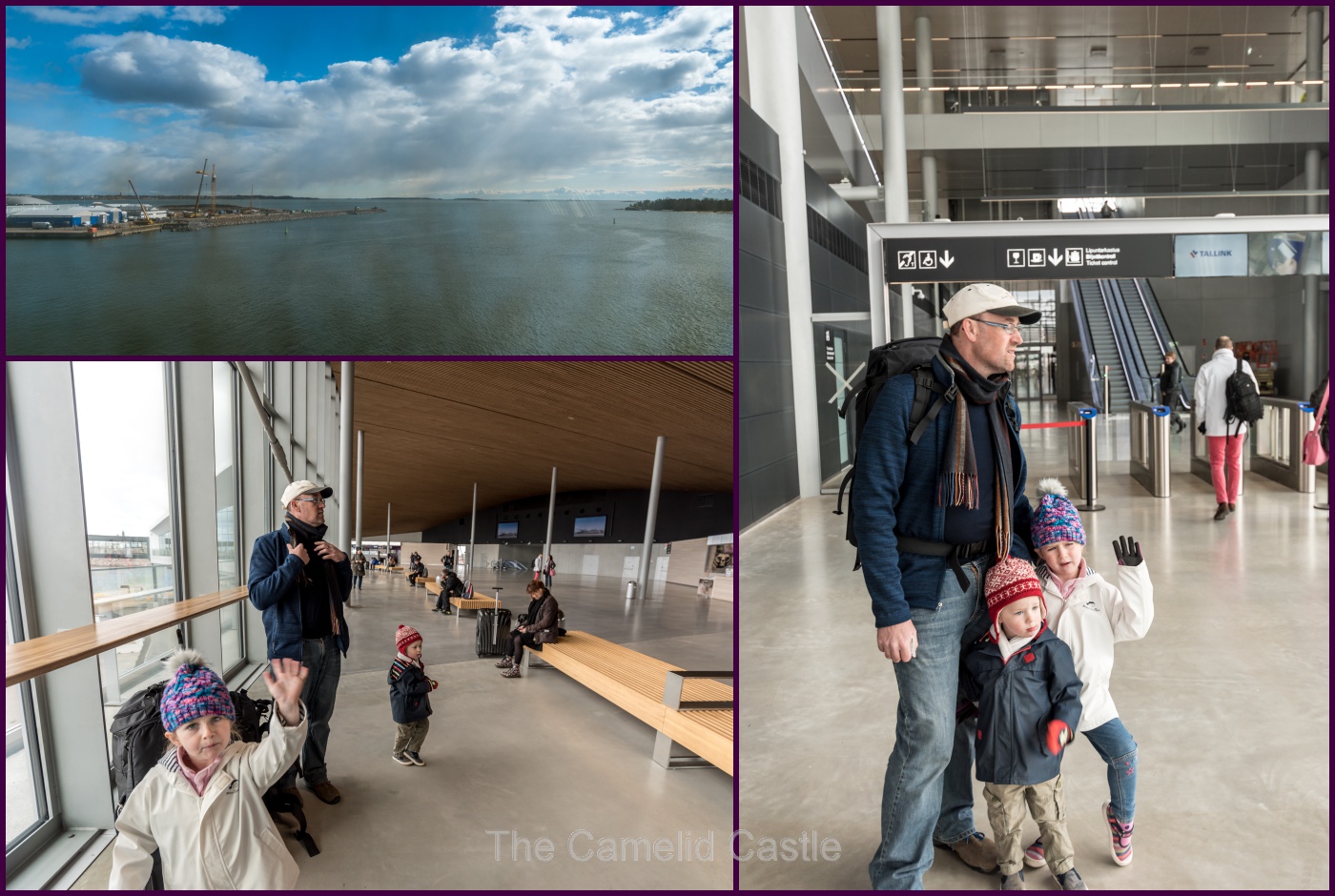 We had a little wait in the terminal while the previous passengers exited and Soren was getting rather tired. The kids amused themselves by watching all the trucks and cars being loaded on to our ferry. Eventually it was our turn to wander on which was a pretty quick and painless process.  We just had to take our luggage up the luggage room, along with most of the ships passengers.

As the crossing to Tallin is only 2 hours we hadn’t bothered buying a cabin, there is plenty of seating in the public areas. We had however decided to do the buffet lunch since it both fed us and filled in a chunk of the time onboard.  Conveniently we only had to pay for the 2 adults as both kids were free.  It was also very reasonably priced (Estonian prices rather than Finnish).

Our expectations weren’t high but it was a really good buffet with heaps of hot and cold options, a dessert bar and free wine, beer and soft drinks.  Soren ate his body weight in smoked salmon and Astrid devoured pickled herring salad and caviar. Yes there were platters of smoked salmon and caviar and beer and wine on tap! 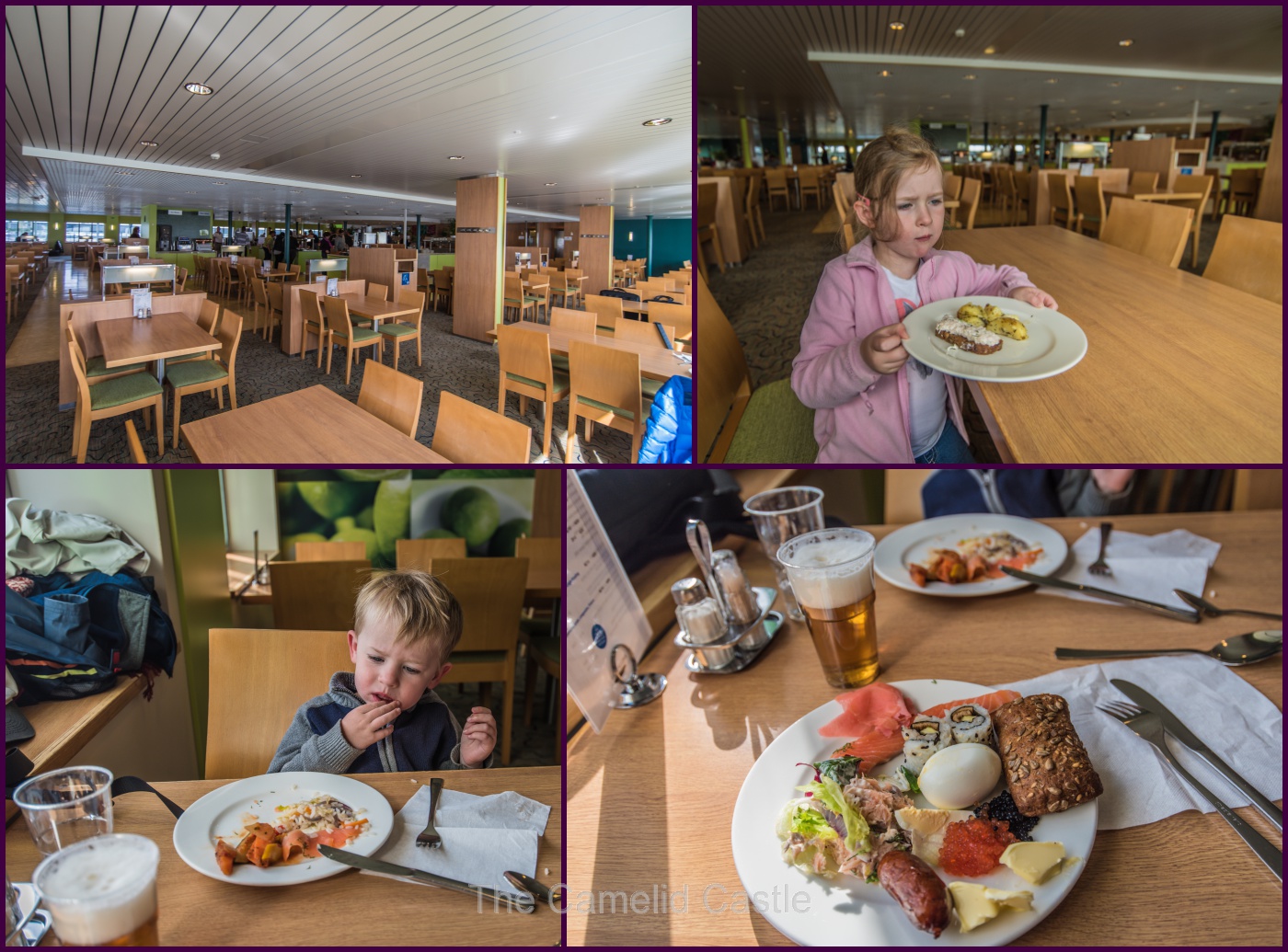 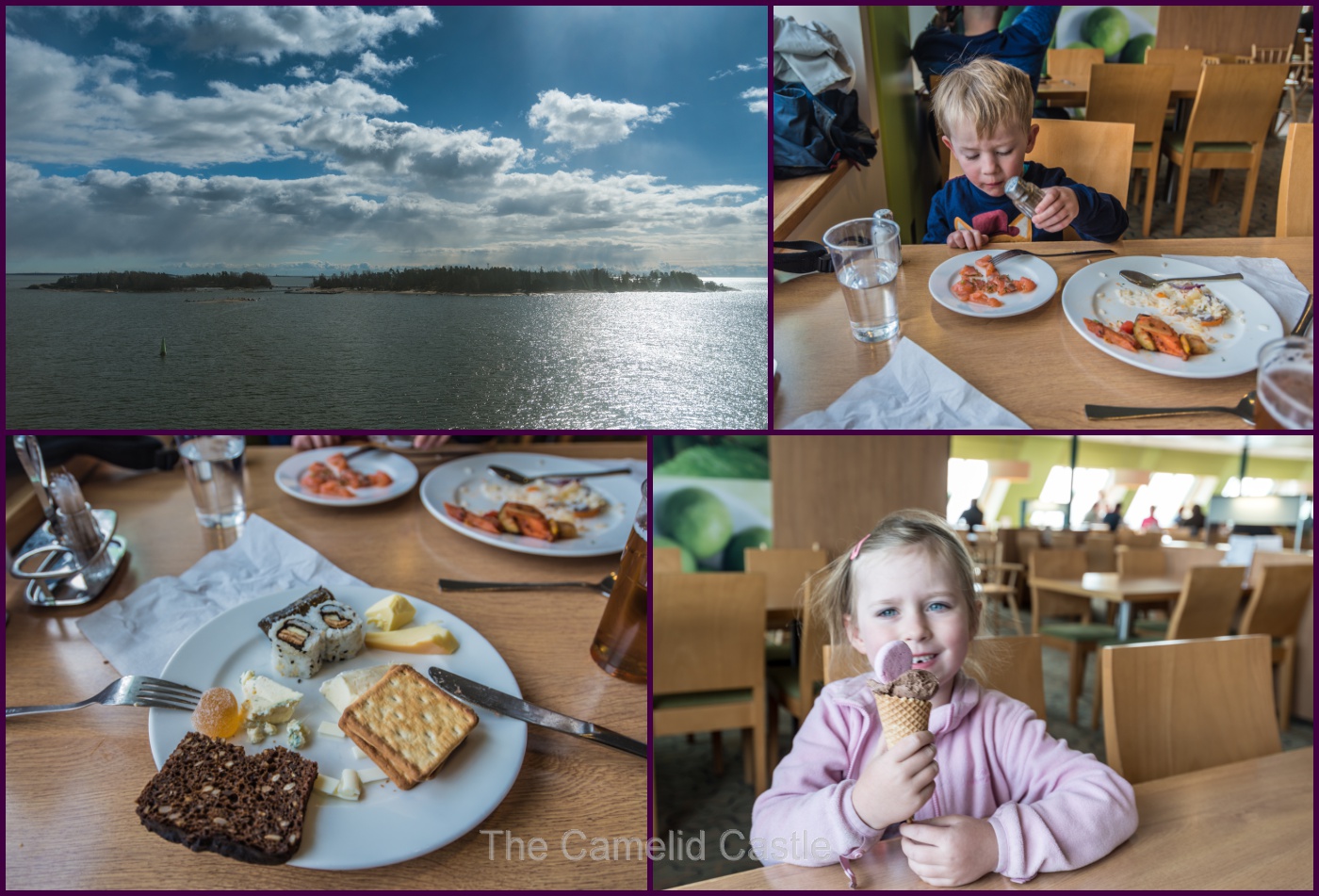 After an hour of eating every dessert they could get their hands on the kids were happy we were all way too full! We had a bit of a wander around the ship, it was still absolutely freezing outside so the visit to the back deck was rather short.  The  ship has a play area and a food court so the kids then got a play in the play area and the 2 hours had passed rather quickly.

Exiting the ship with our luggage was pretty fast, it was like they wanted to get rid of us and load the next lot of passengers on. The original plan was to catch the bus to our Tallin hotel but it was 2 different buses and almost 4pm and we were feeling a little bit weary……… and the lunch wine was wearing off! We spied a line of taxis and decided to be lazy and get to our hotel as quickly as possible.  It was only around 5km so spending an hour fluffing around with buses and walking with luggage didn’t seem appealing.

An exhausted Soren fell asleep in the taxi after about 20 seconds, sadly the ride was too short for him to get a decent rest. It was definitely a good move getting the taxi and we were at our hotel without much fuss. We were staying  at the Kreutzwald hotel which was situated just a few hundred metres from the old town, but significantly bigger and cheaper rooms than the old town hotels.  The room was huge and the kids were blown away by the enormous bath. 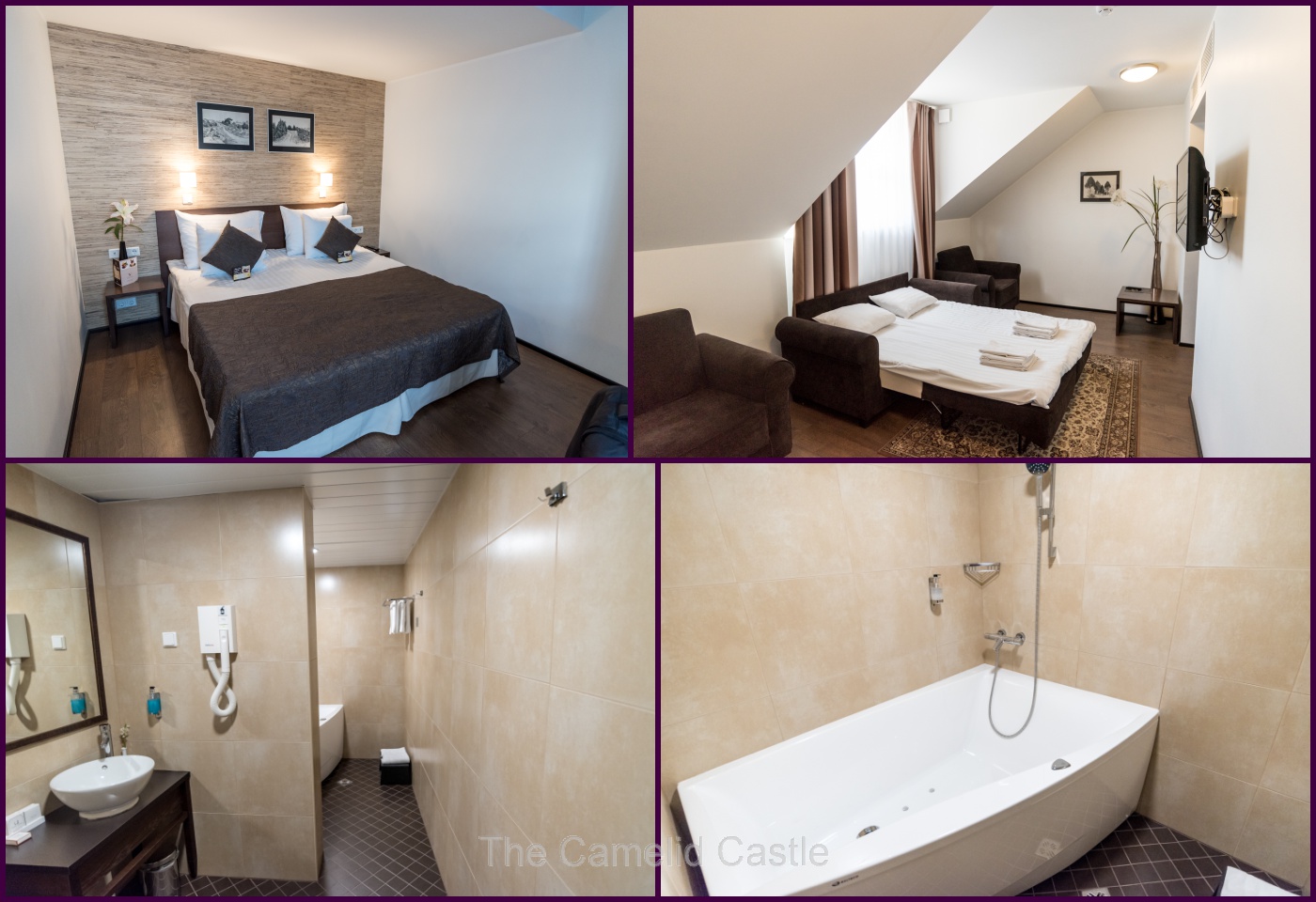 As appealing as the spa bath and comfy beds looked, we decided to go for a quick walk to see a little of Tallin before the day was out.

We headed out the not so direct route to the old town.  The old town area of Tallin (which it is best known for) is quite small, but the city itself is a lot larger.  At first impression Tallin seemed a little odd.  There were lots of old and beautiful buildings, with knocked down buildings, building sites and abandoned buildings. 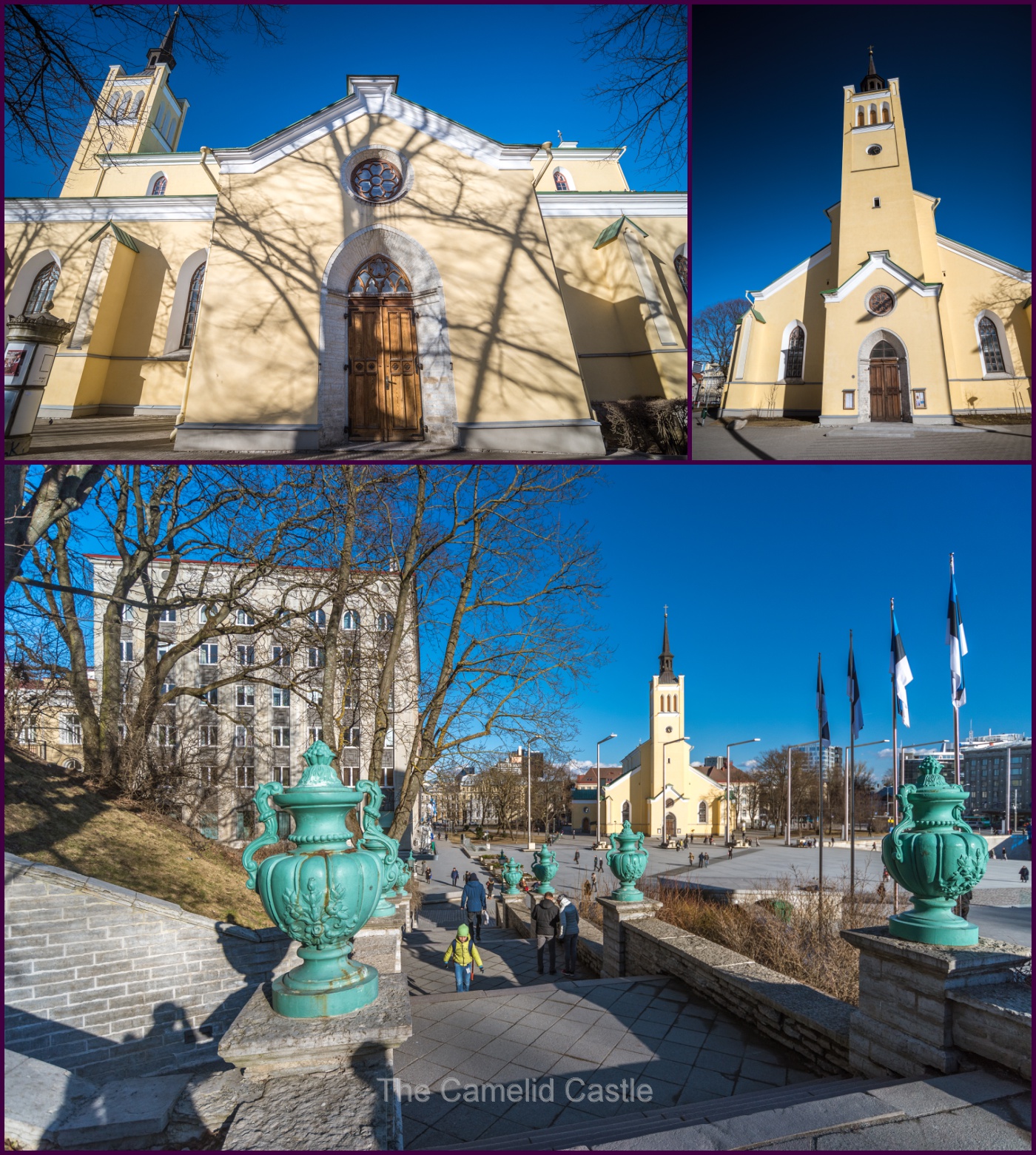 We made our way to the old town, but only just had a quick skirt around the edges before deciding dinner and bed was in order.  We had a full day in the old town planned for the next day and it certainly looked interesting with the cobblestone streets and medieval towers. 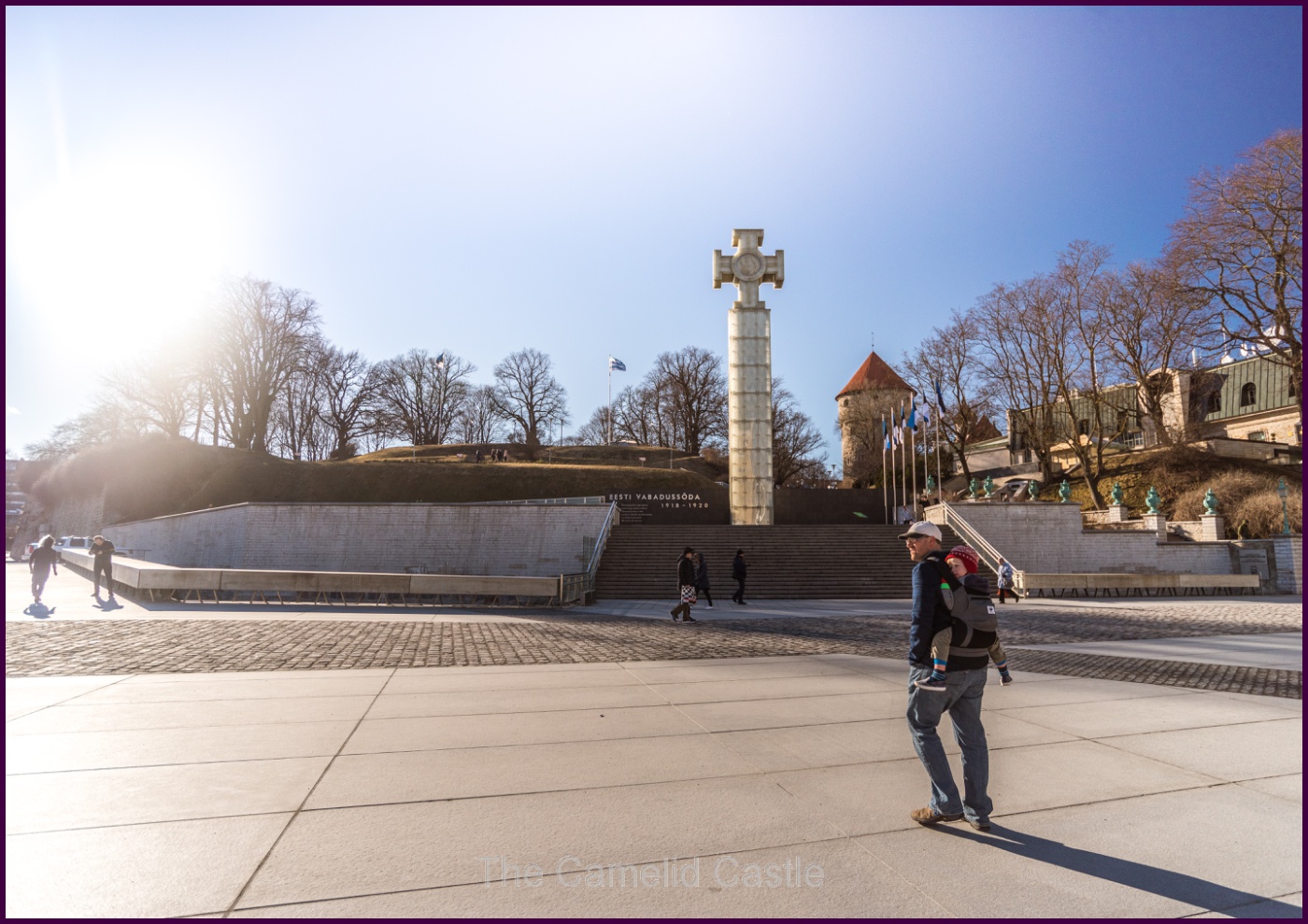 Soren fell asleep in the ergo (despite his taxi nap earlier) and Astrid was fading fast, so we decided to have a hotel picnic for dinner and a not-so-late night (it was never going to be early). Hotel reception had let us know where the nearest shopping centre was, which was conveniently not too far from our hotel.

With some local Estonian specialities purchased for dinner (Estonian cheese, wine, rye bread, more salad and Estonian beer and cider) we were off to the hotel. The kids were too tired to eat much but we’d promised a bath in the huge spa bath which was a hit. 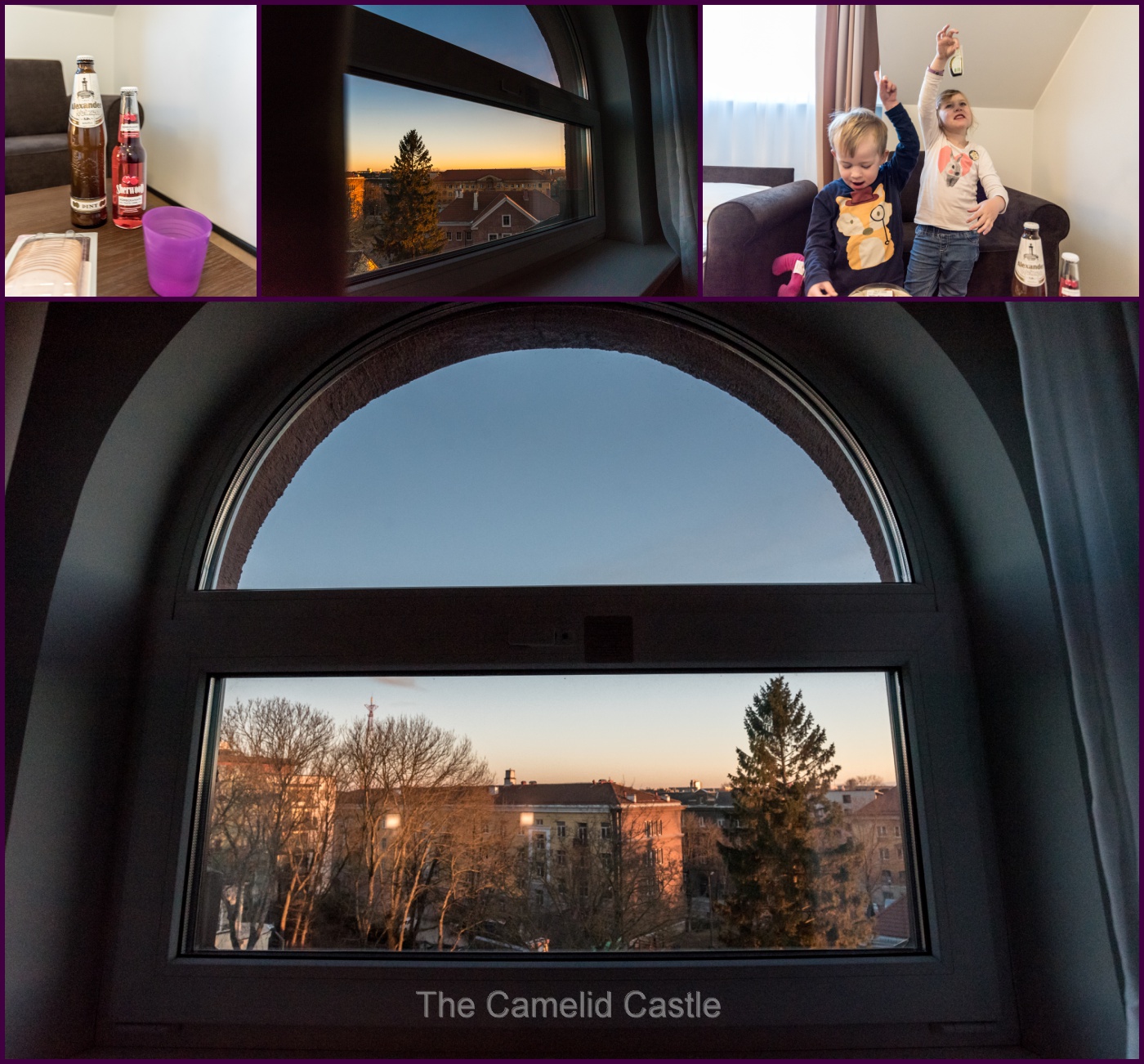 While we’d been in Helsinki the 2017 World Figure Skating championships were being held in the city.  Apparently every hotel room in Helsinki was booked out during our stay.  We wish we had of known before we arrived as we would have tried to get tickets.  The figure skating was being telecast live in Tallin so we all enjoyed watching it from our hotel room in Tallin during dinner.

We were also treated to a pretty nice sunset from our room. We were looking forward to exploring more of Tallin the next day, more walking was definitely in order!

Daily statistics for Wednesday 29 March 2017 in Helsinki, Finland and Tallin, Estonia – the temperature range for both cities was minus 5 to 4 degrees, with the apparent temperatures sitting between minus 9 and minus 3 all day.  Not so warm, but it was beautiful and sunny and not too windy, so no complaints. It’s hardly what we’d consider ‘Spring weather’ in Australia though!   The total walking for the day was 13.5km, we almost worked off our Finnish breakfast!

Next up, exploring the old town of Tallin, Estonia!