In Canberra ANZAC day (25 April) is known as the day Winter arrives and you can turn your heater on!  Well this ANZAC day was spent in Paris, and despite having enjoyed some lovely Spring like weather in the preceding few days, Paris turned on the cold for us! It didn’t dampen our spirits though, Soren got his much longed for trip up the Eiffel Tower for some chilly sight-seeing and there was a falafel lunch in the Marais, a walk around Notre Dame and past the Seine, shopping at our favourite shopping centre -BHV and plenty of delicious French food to keep our tummies full….

The previous day (Monday) meant many of the shops on our street, Rue Montorgueil, were closed for the day. Tuesday meant all the shops opening up adjacent to us (yay fresh fruit and veggies!) but there wasn’t a lot of sleeping-in past 7:30am due to the extra noise.  There wasn’t a rush to get out for the day so we had a nice breakfast of scrambled eggs, bacon and mushrooms that Anto had cooked, while I wandered downstairs to one of the many wonderful boulangeries on our street, where I managed to go and pick up fresh baguette and croissants with my average French.

After breakfast we rugged up for the dreary weather that was predicted for the day. After t-shirts the day before, it was jumpers and coats today as it was cold and raining. We caught the RER from nearby Châtelet station down to Champ de Mars. Astrid and Soren had been asking to go up the Eiffel Tower, especially Soren who had visited on our last trip but we hadn’t actually gone up that day.  We had gone up the tower in 2012 with a 16 month old Miss Astrid, but she apparently didn’t remember well enough, so also wanted to go again!

We couldn’t get reserved Eiffel tower tickets despite having looked for the last week or so, so thought we’d try our luck with just turning up and lining up. Given it was a Tuesday and cold and rainy we hoped the lines wouldn’t be too long. 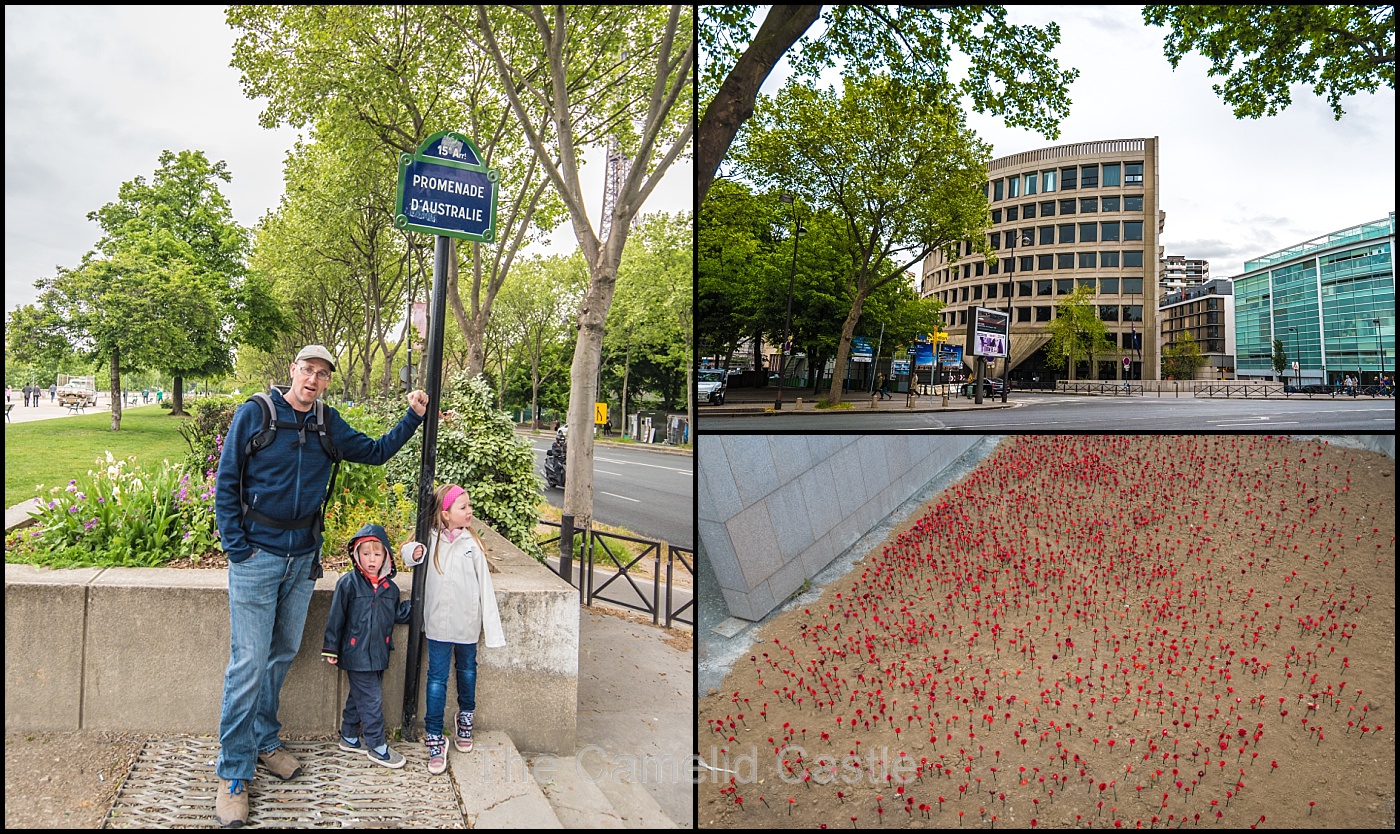 As we walked along the Seine the kids were excited to see the Tower getting closer by the second. 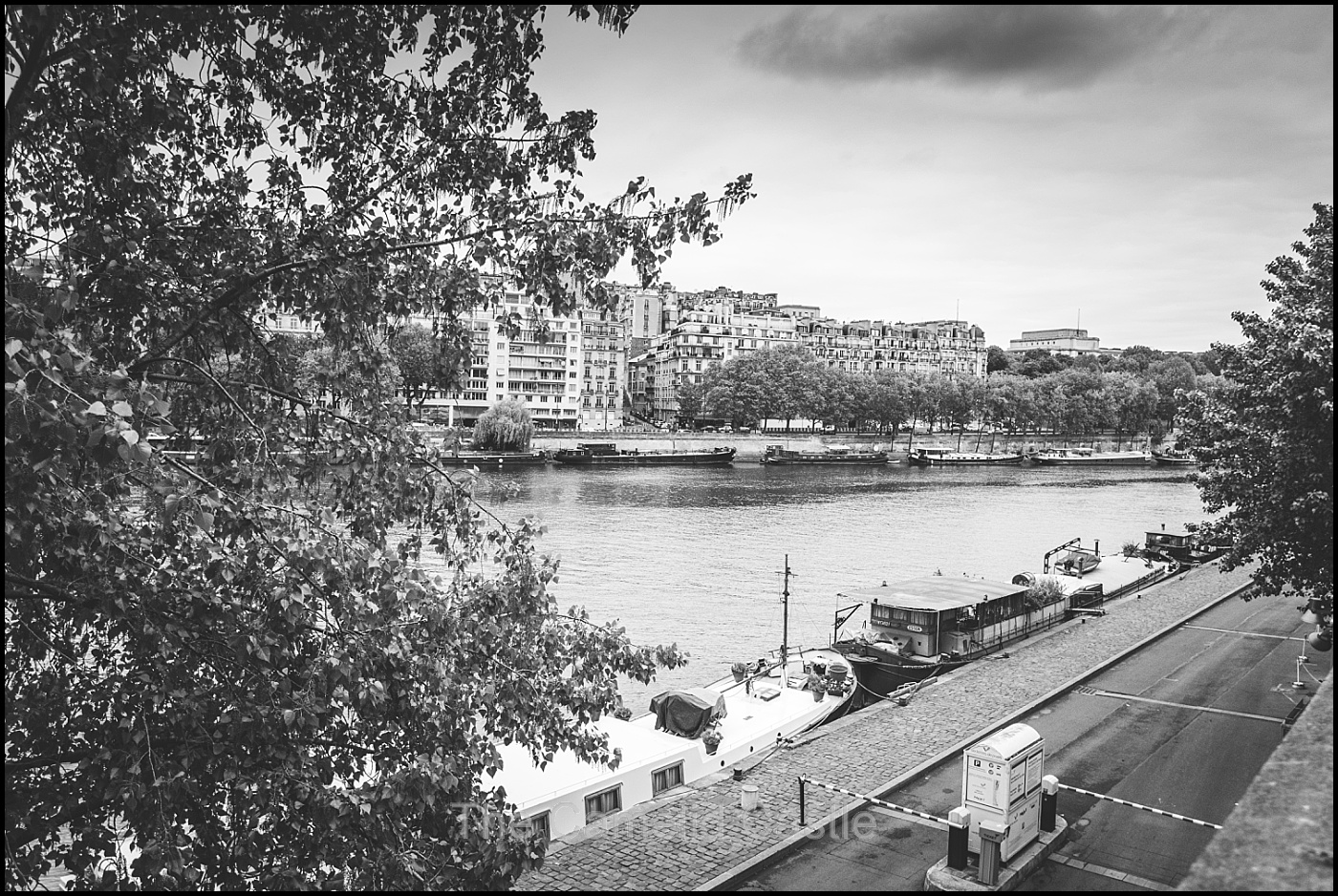 Since we last visited the Eiffel Tower, in January 2016, access to under the Tower had been blocked without going through security. You used to be able to walk directly under the Tower, but no longer.  Luckily the line for this round of security was relatively short.

Three of the pillars were open today and the line for the West pillar was quite short so we decided Soren was in luck.  After handing over more Euros it was into the line for the next round of security.  We lucked out and it was only about 10 minutes from buying tickets to being inside waiting for the first lift. 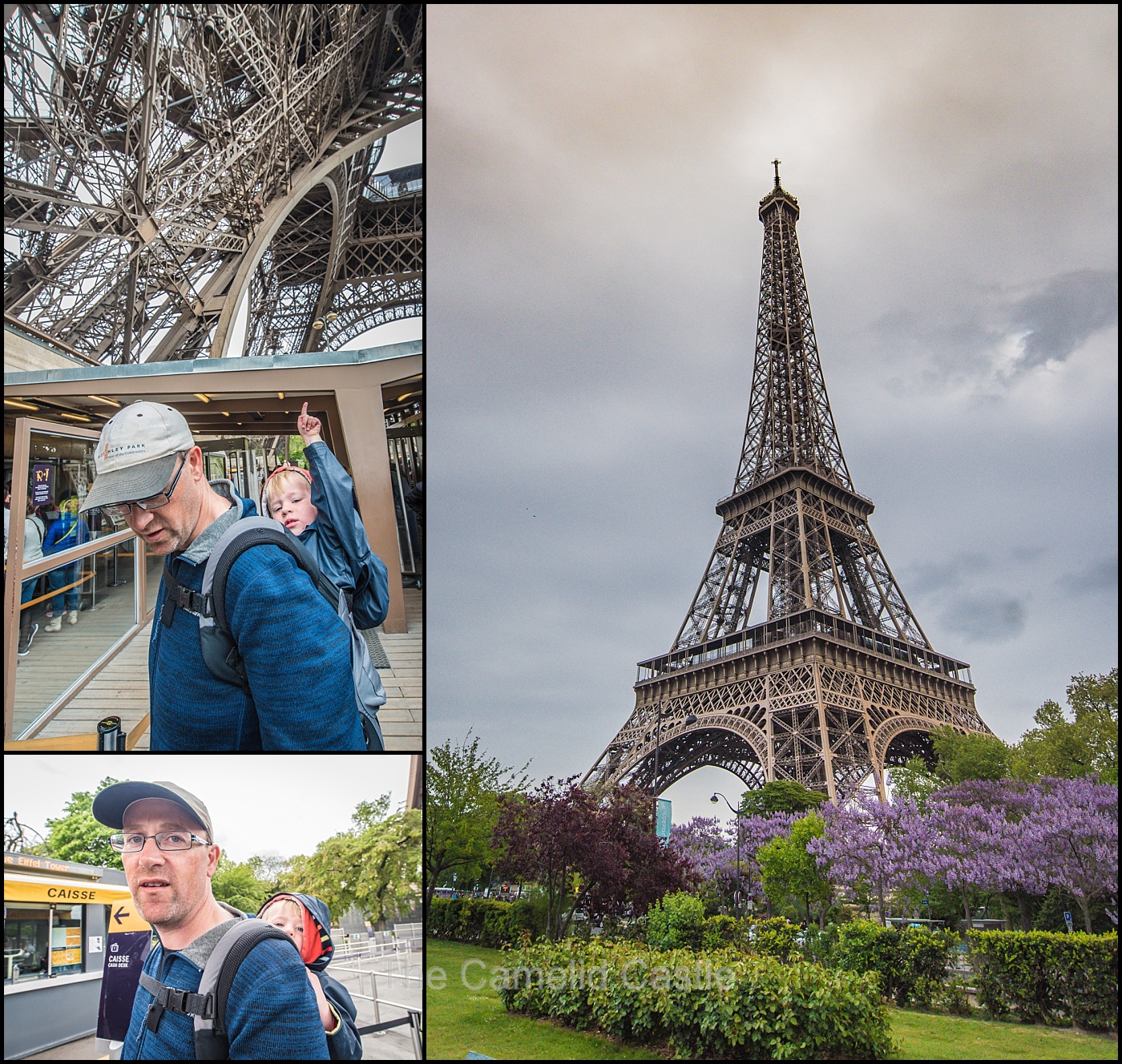 There are 2 different lifts to get to the top-level of the tower. The first lift up to the main level goes sideways up the pillar. This is my least favourite experience and I wasn’t all that happy to be doing it again, as the first experience in 2012 was enough for me!  The lifts are always packed to capacity so we were packed in like sardines. The kids, who do not suffer from my vertigo and non-enjoyment of heights, enjoyed the views on the way up. 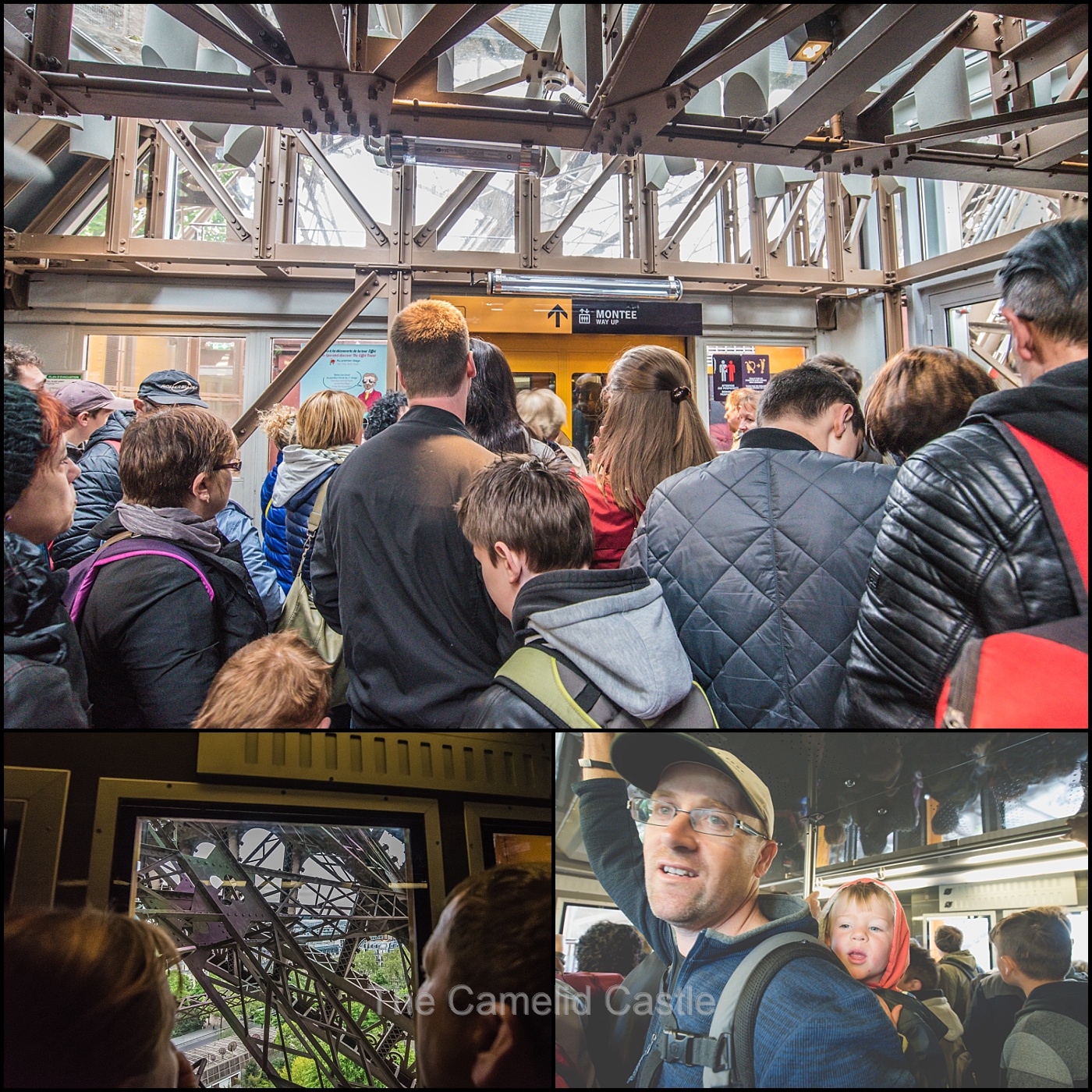 It was freezing on the main level, so we decided to jump straight in the line for the ‘sommet’ (top level). This is the slower line as there is only 1 lift to the top rather than the 4 operating up the pillars and it was pretty cold waiting around, in the slowly snaking line.  To their credit the kids were very patient and happily waited until it was our turn in the lift.

The second lift goes straight up and we eventually reached the top.  The tower is 324m tall, or the same height as a 81 storey building.  The top observation deck is 276m above the ground and is the highest observation deck accessible to the public in the European Union.  Even on a grey and overcast day the views across Paris and down the Seine were fairly impressive. It was however bitterly cold! 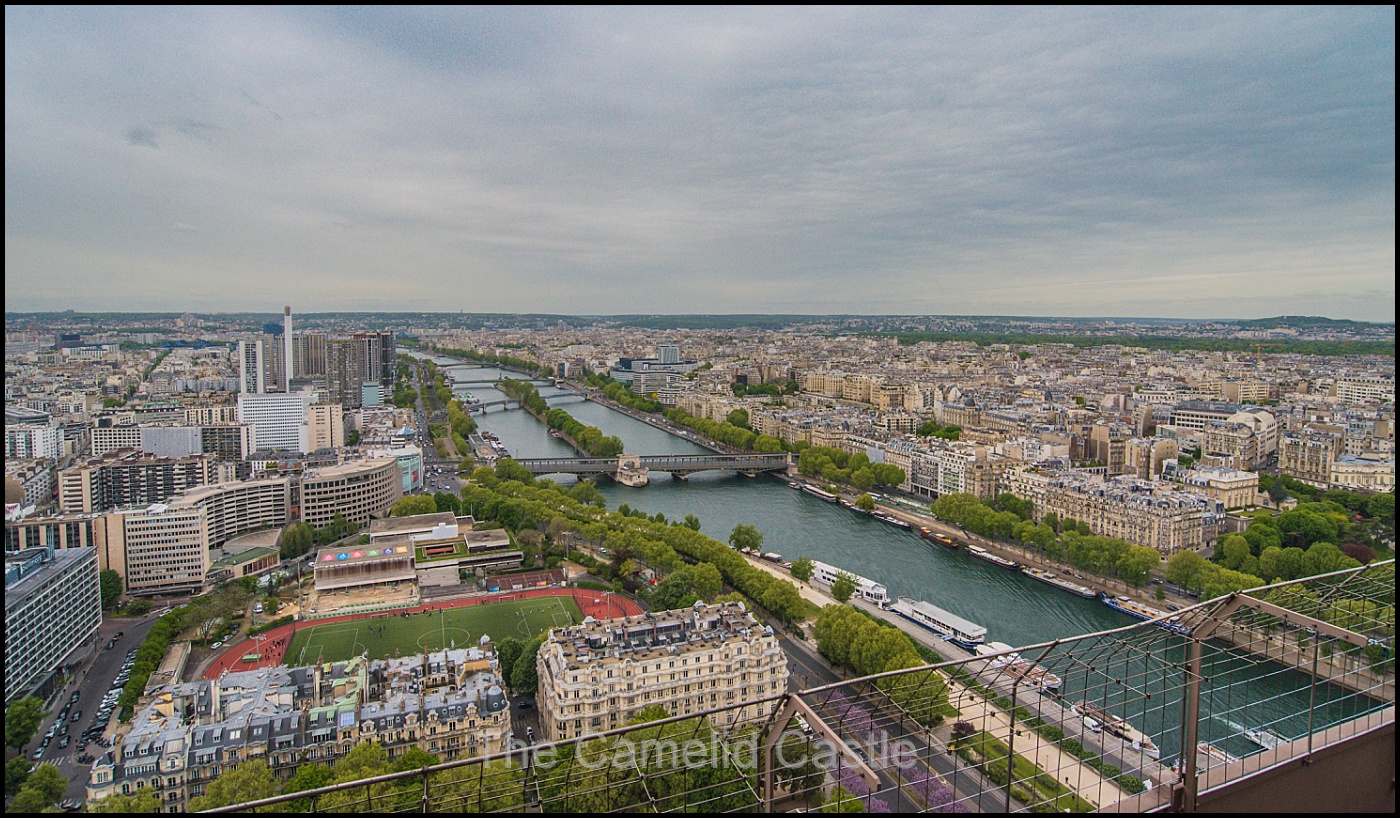 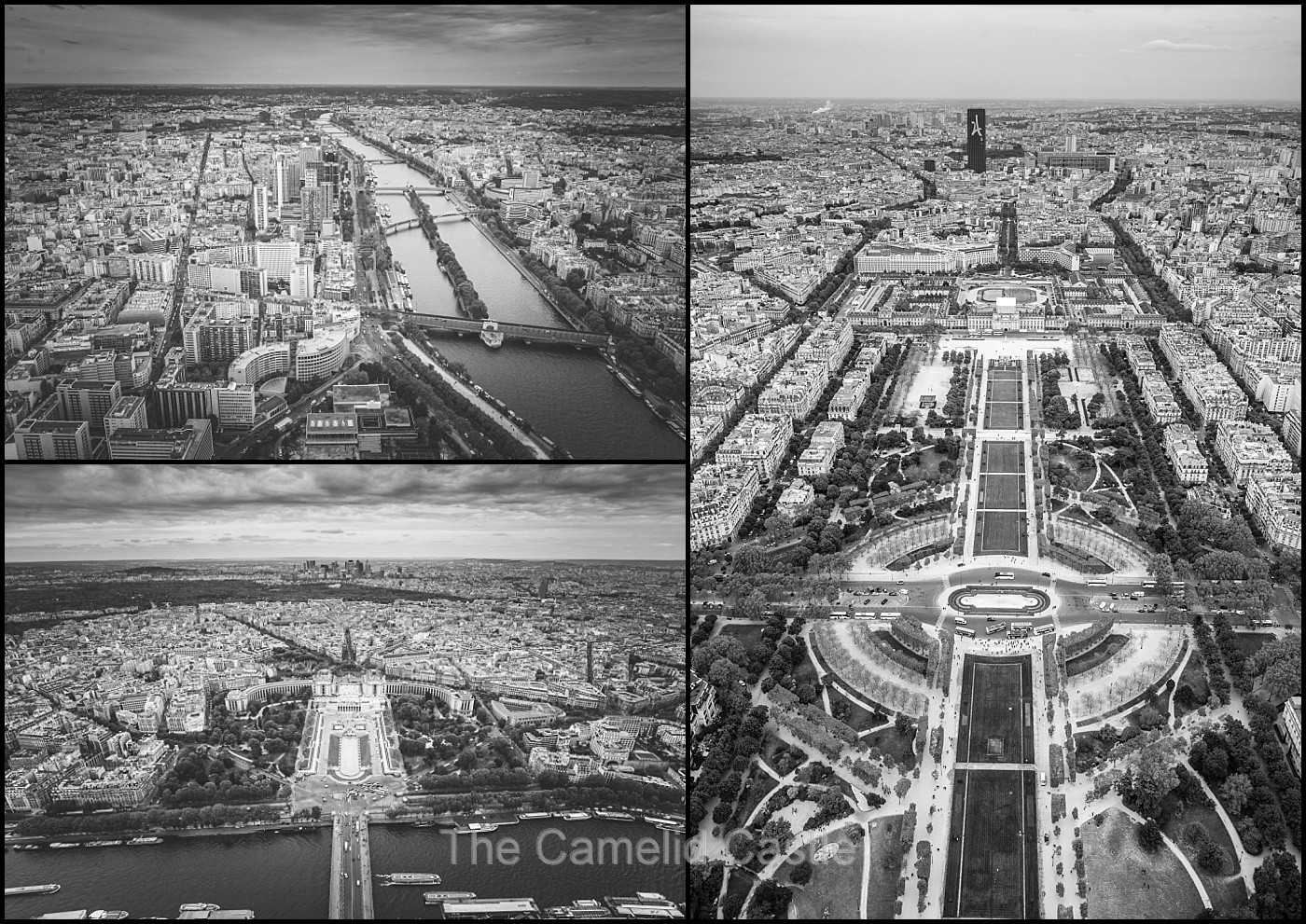 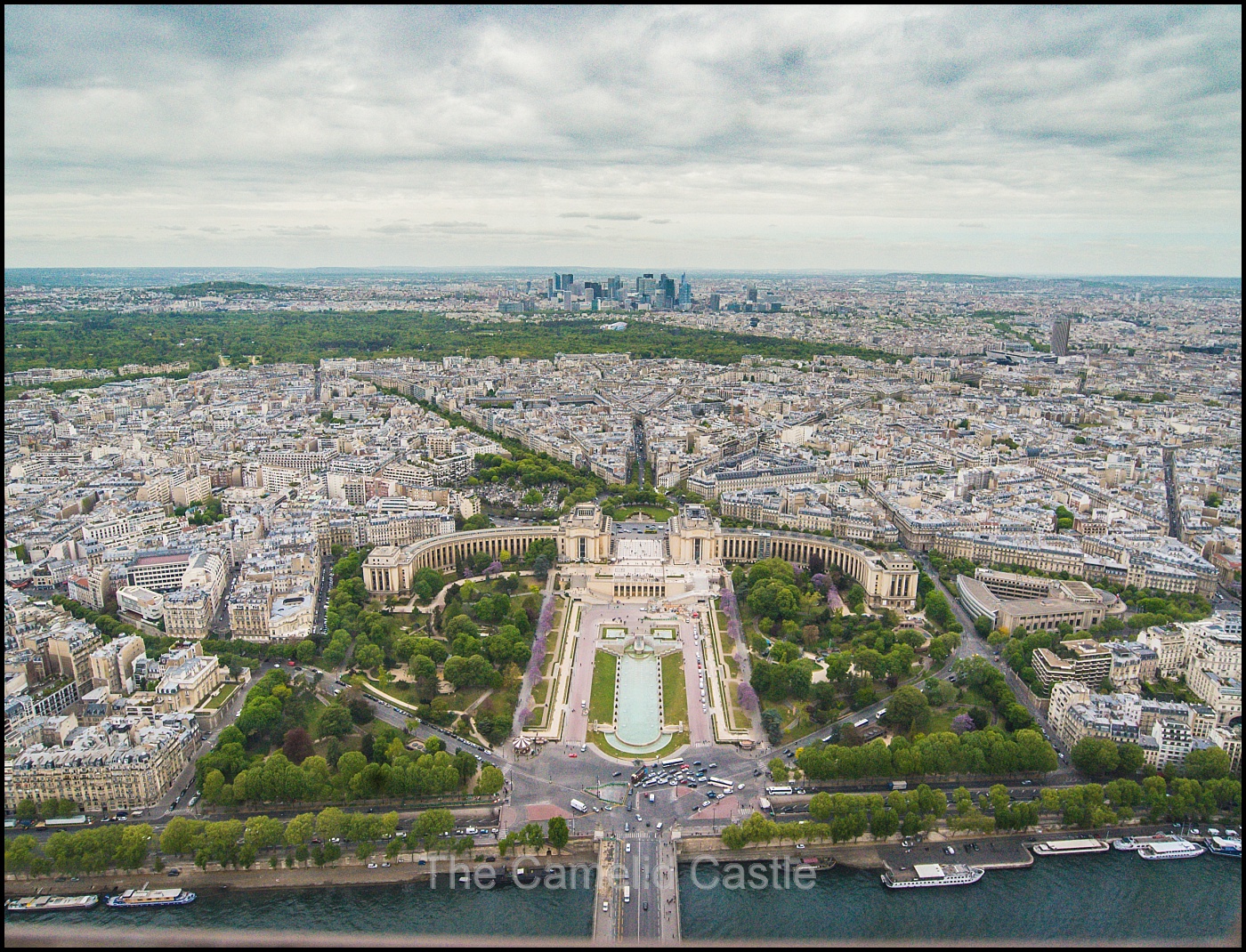 For a densely populated city, Paris has a surprising amount of green space. Like the previous day when we were up the top of the Arc de Triomphe, the kids enjoyed spotting all the landmarks and buildings throughout the city. 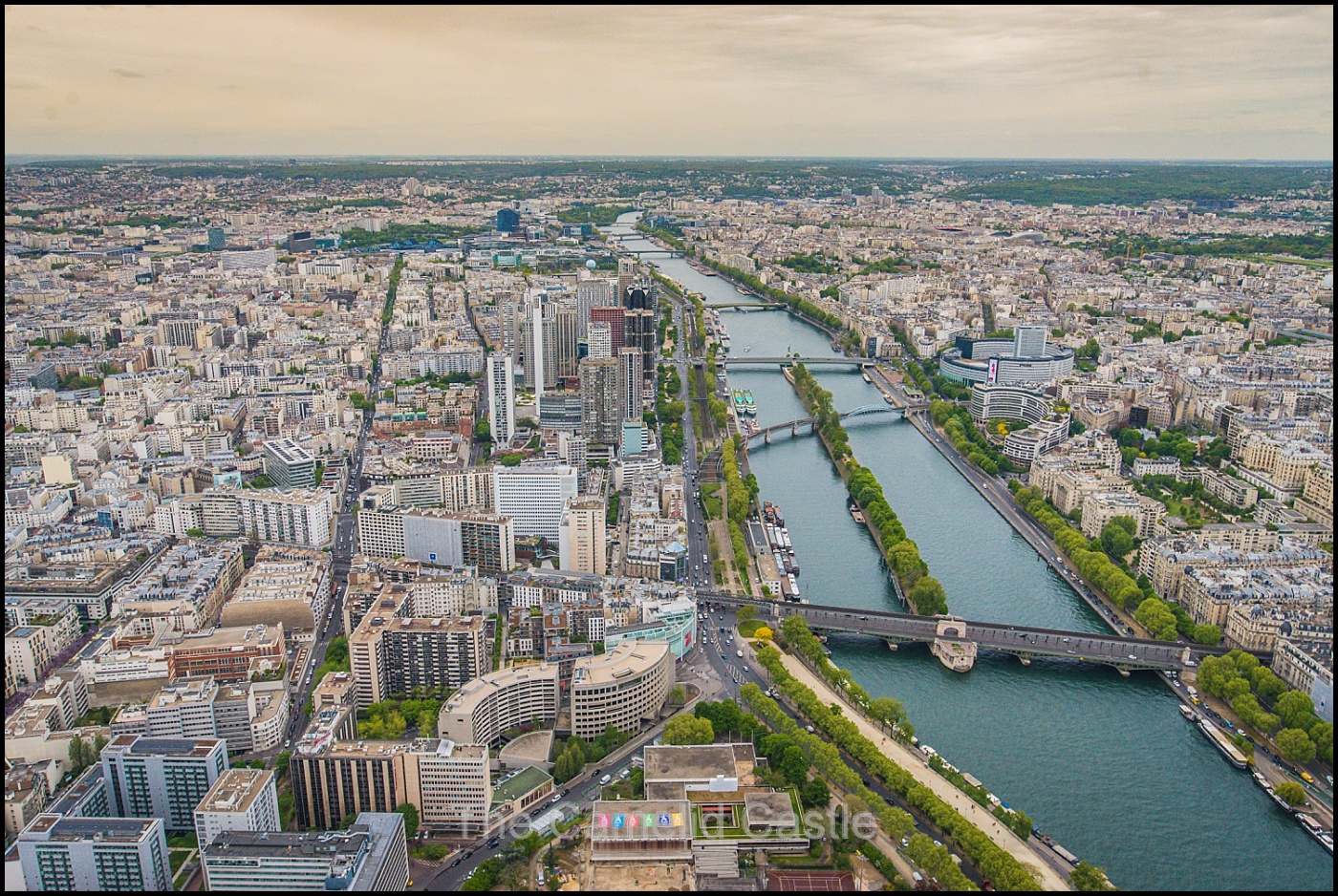 Pretty soon the kids were frozen solid and they voted for going down to the first level. Luckily the line for the lift going down is shorter than the one going up. The ride down is just as unpleasant though for those with vertigo……. 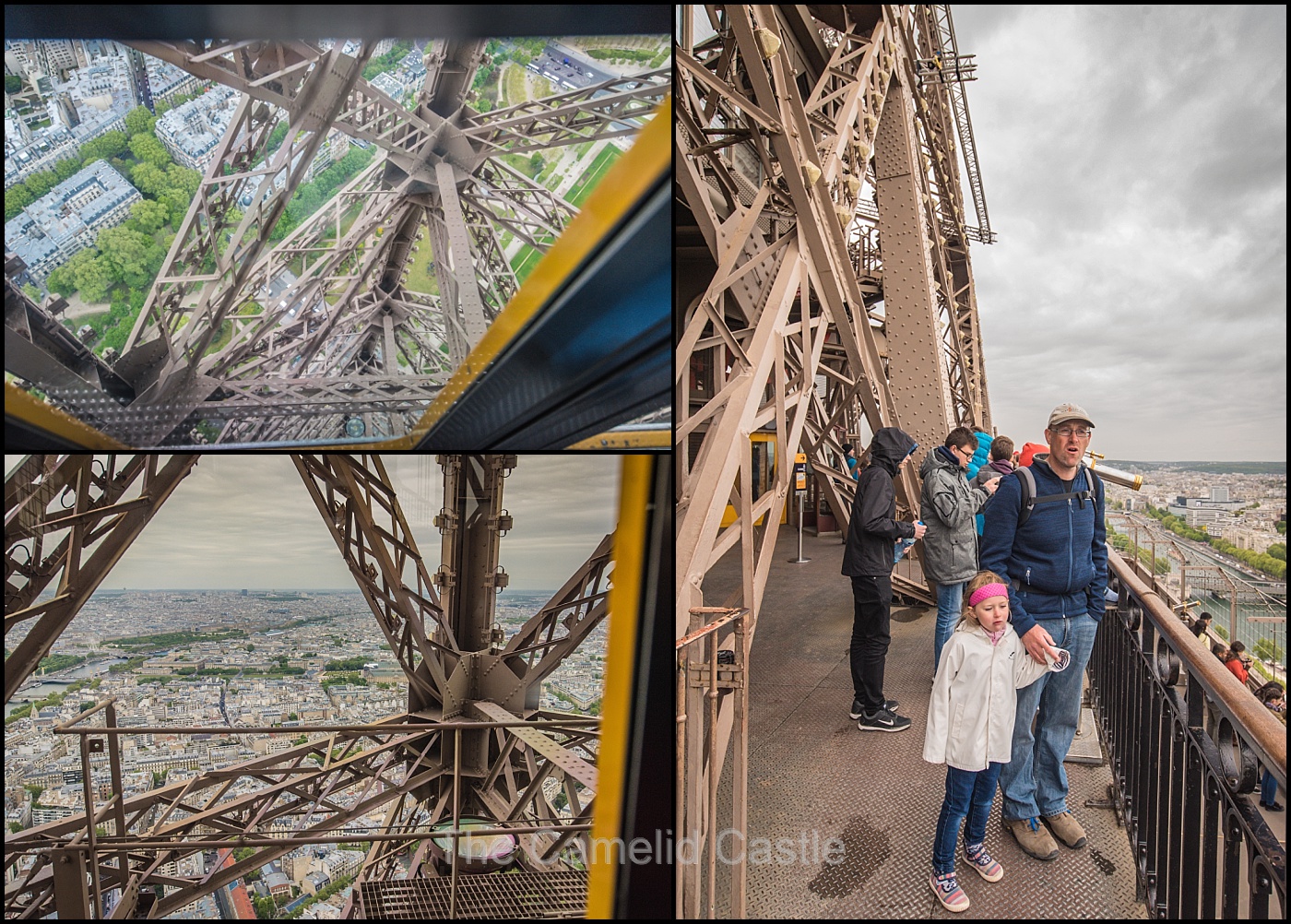 The main level also offers pretty good views and there is less wire in the way, making it easier to see across Paris. 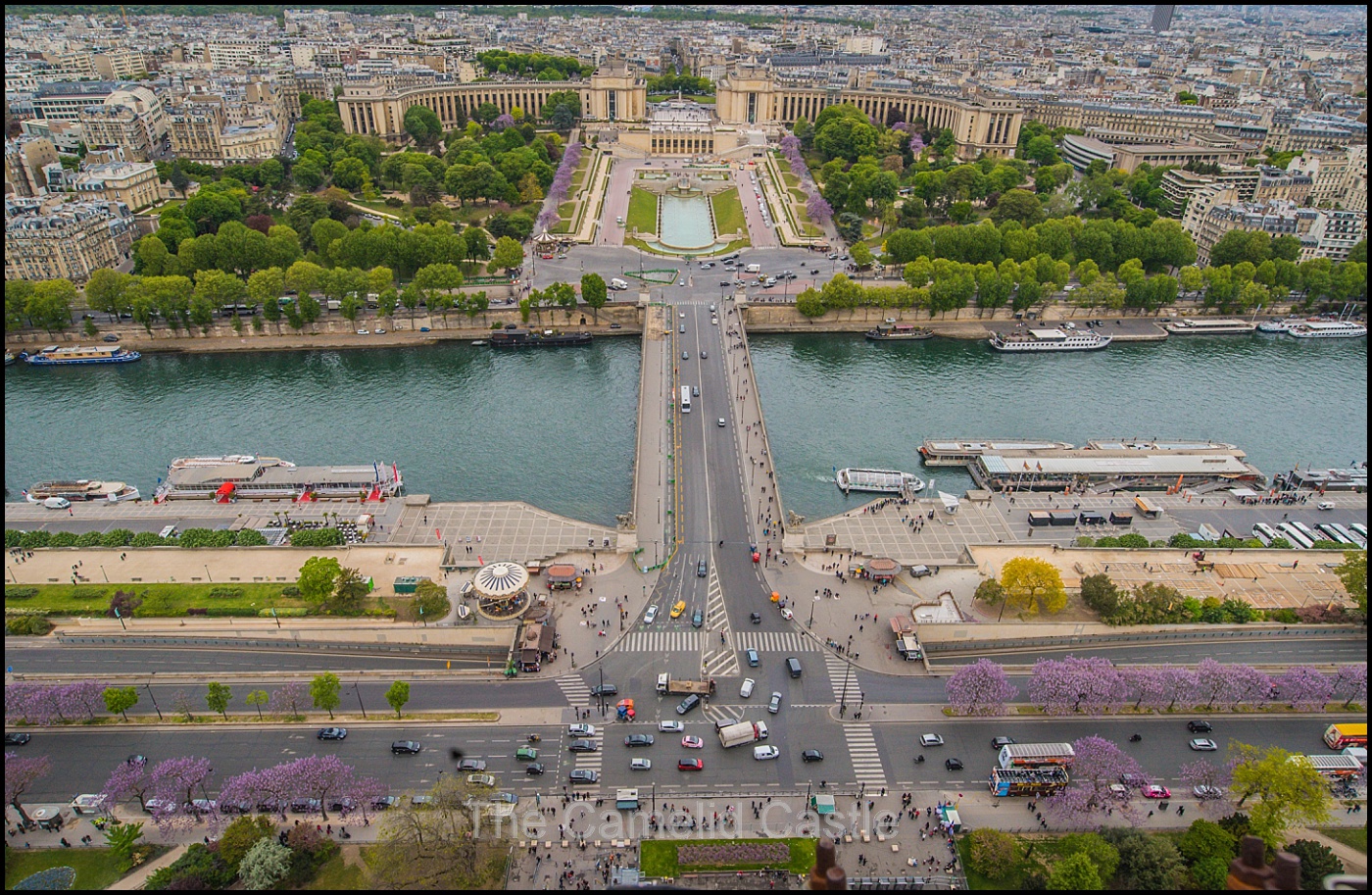 After we’d seen in all four directions and had our fill of being cold, we opted for the inside lift line (that was heated).  It took a little longer but at least helped us defrost slightly.

Looking back at the photos from November 2012 when we were up at the Tower, Miss Astrid has certainly grown a bit! 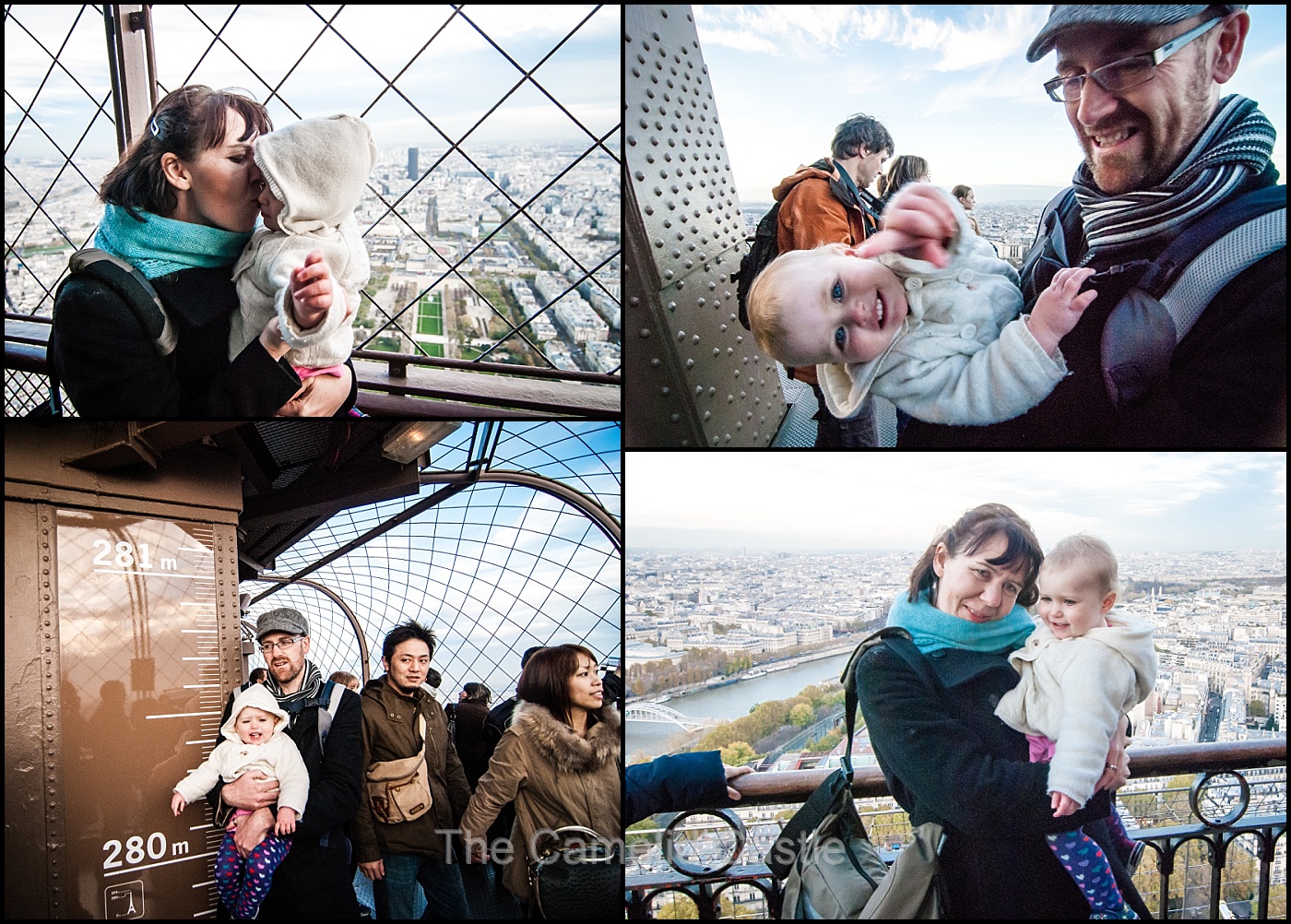 Back down the bottom of the tower the kids were impressed at high up they’d been. I was just thankful to be off the lifts! 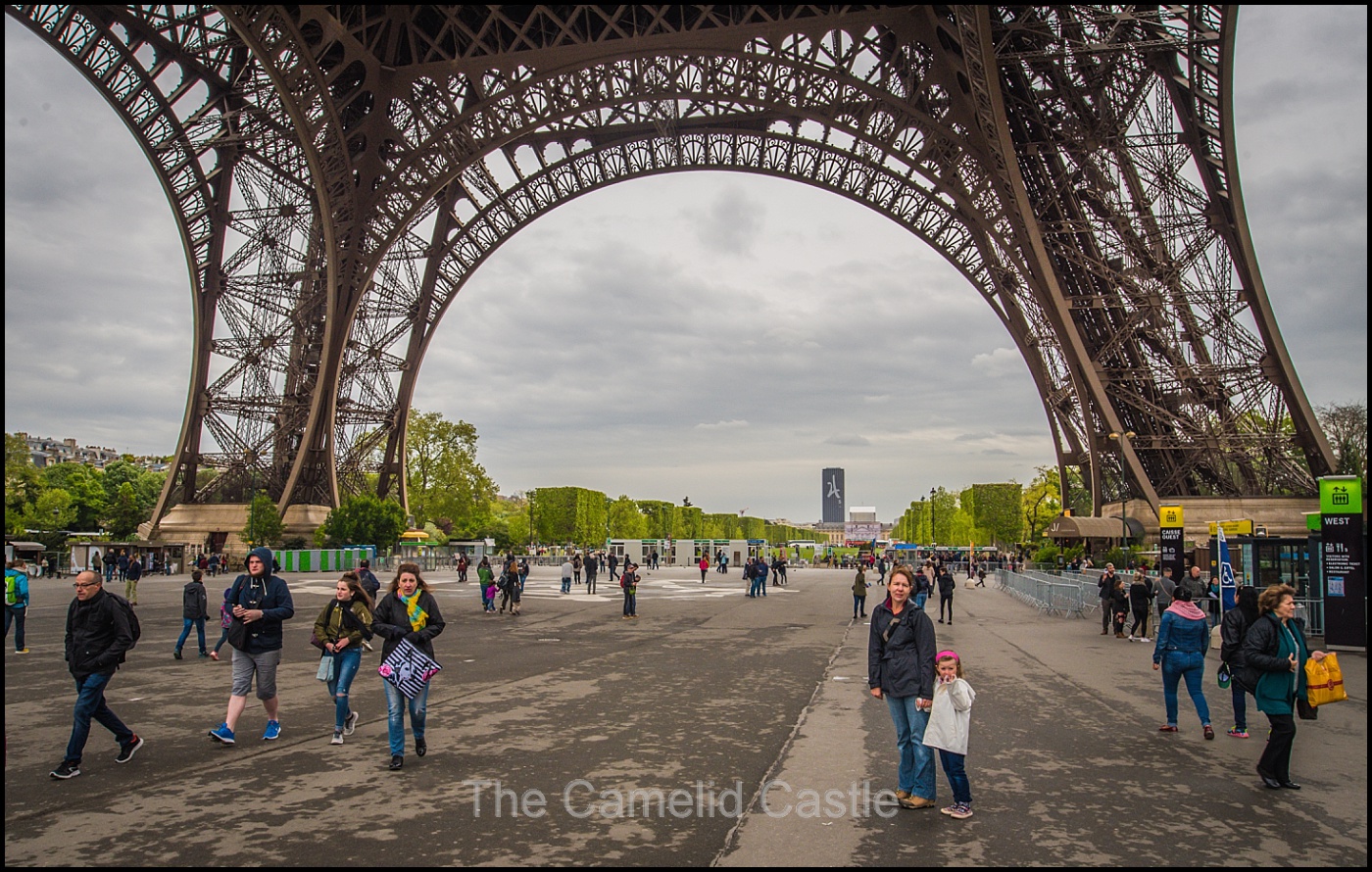 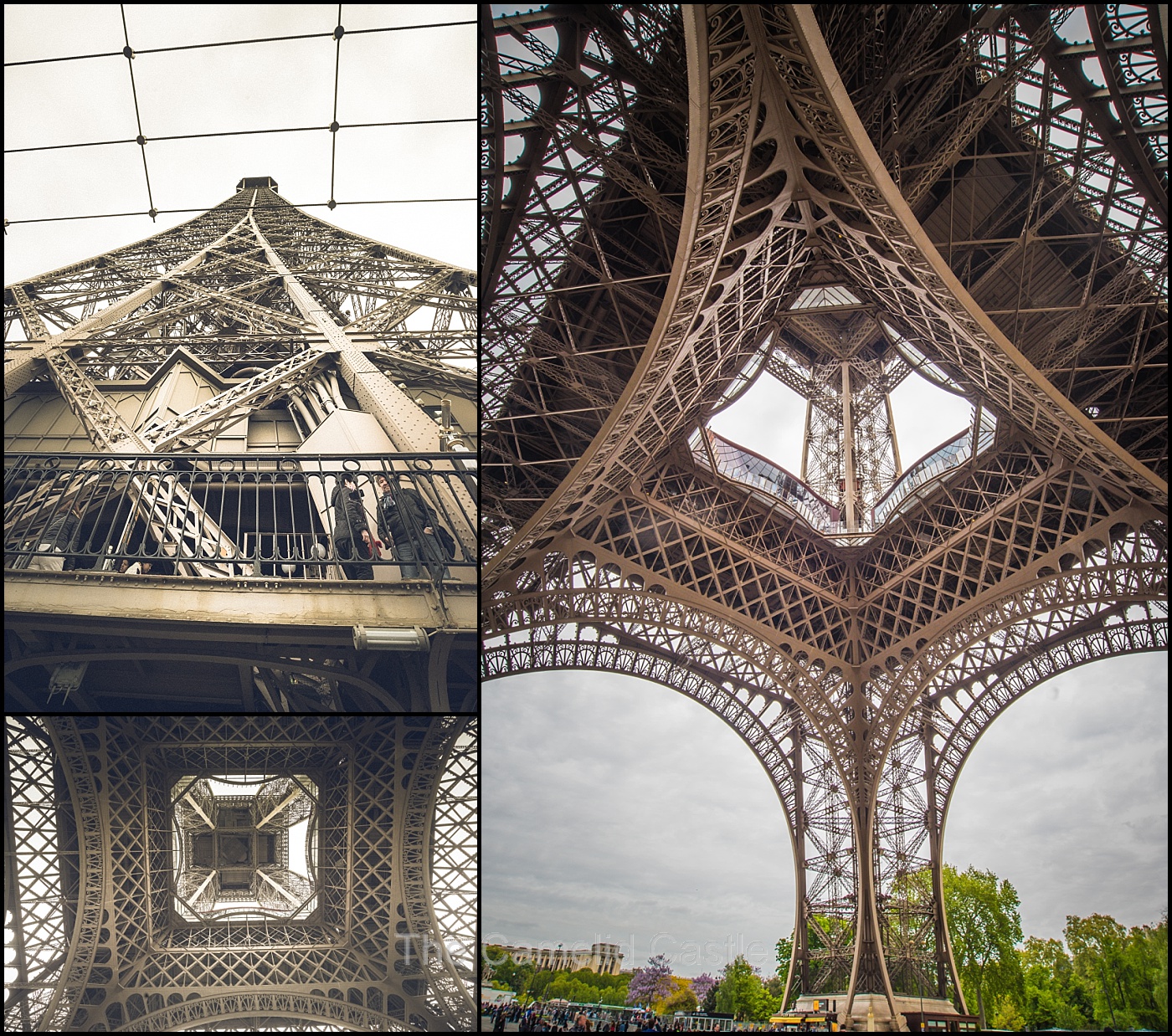 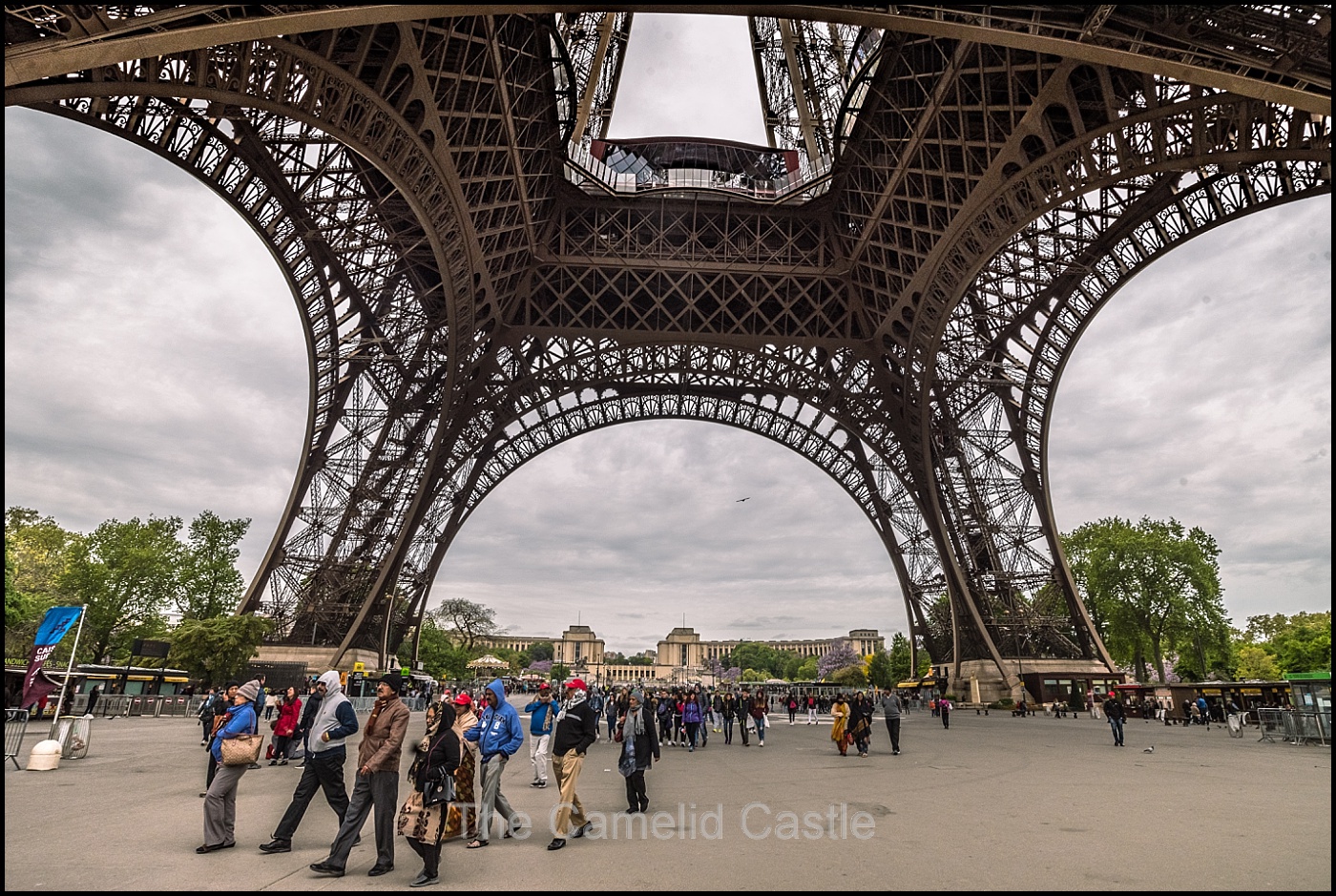 The positive of the freezing weather was that the whole Eiffel Tower experience took less than 2 hours without reserved tickets, so not too bad. It also meant that we had 2 happy kids. Even months later when writing this post, they still talk about going up the tower, so it was money well-spent!

We decided it was too cold out to be walking around for long, so headed back to the RER station. Soren was feeling tired and cold, and got an ergo ride on Anto’s back…….. and promptly fell asleep.  Next stop in our tour of Paris, was Notre Dame. Astrid was keen to see Notre Dame again since when we had been visiting Cathedral St Croix D’Orleans a couple of days earlier we’d been struck by how similar it looks to Paris’ Notre Dame. 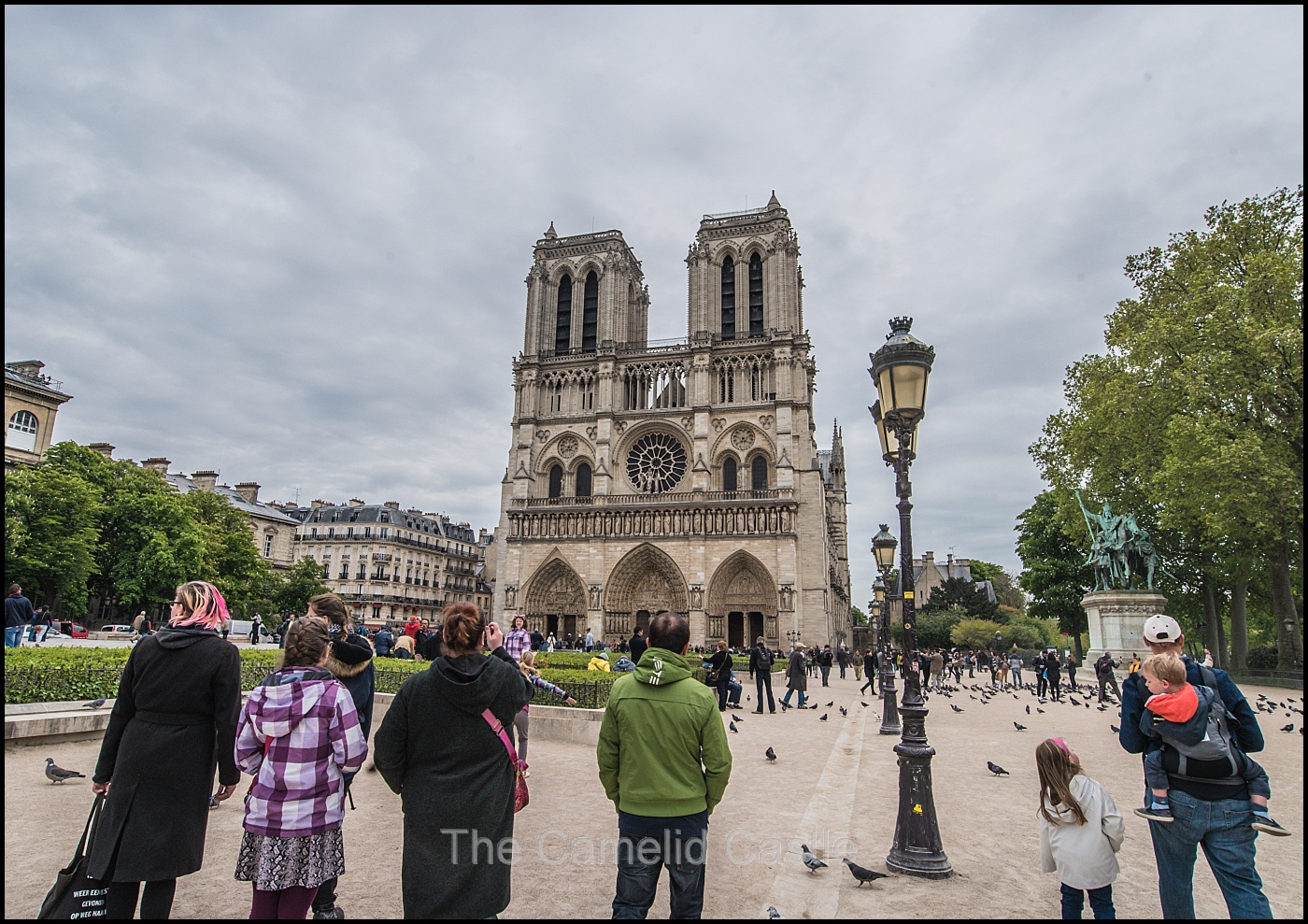 We had visited the inside of Notre Dame during our 2012 trip to Paris and today the lines were extremely long (curiously longer than they had been for either the Eiffel Tower or the Arc de Triomphe).  We hadn’t been planning to go inside and the length of the lines confirmed that decision!  The kids were just as happy chasing the many pigeons outside the cathedral. 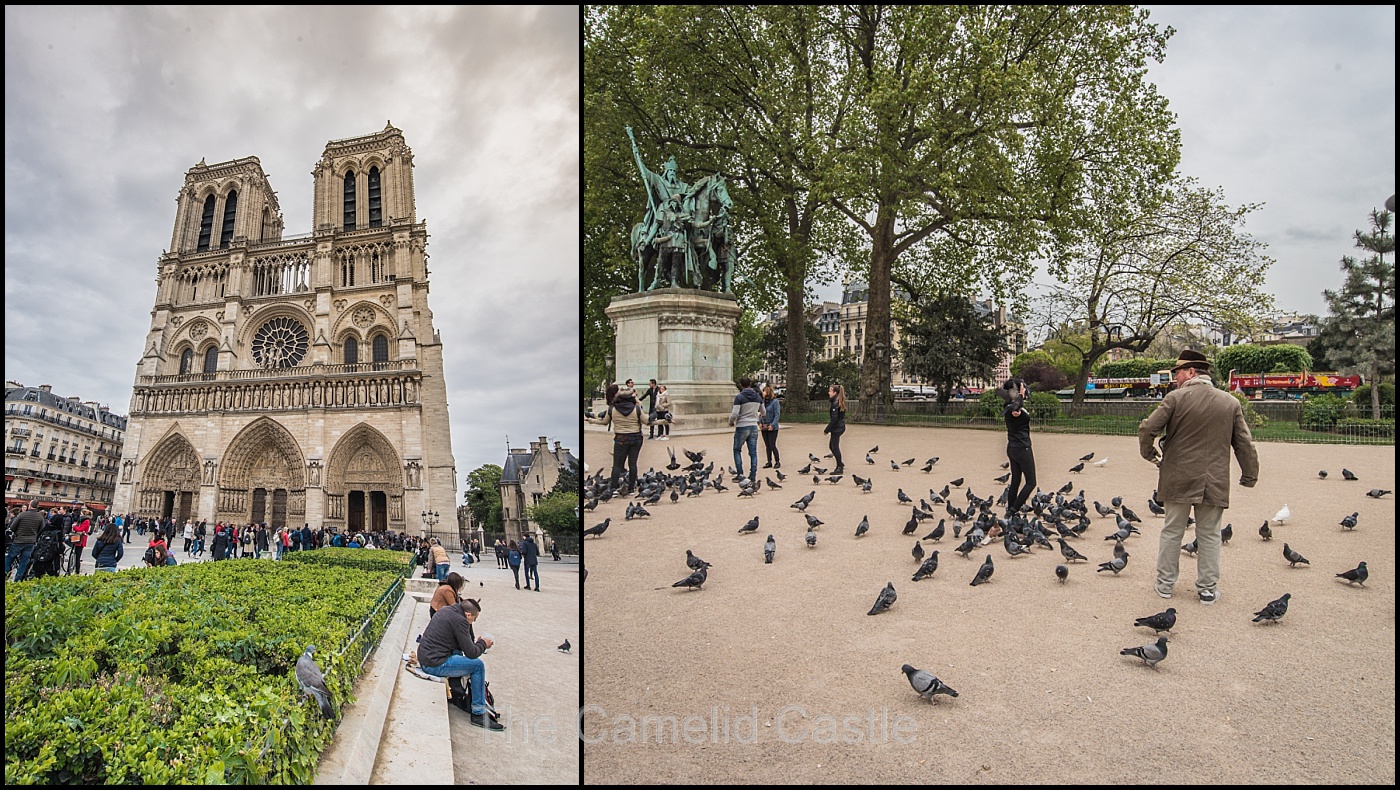 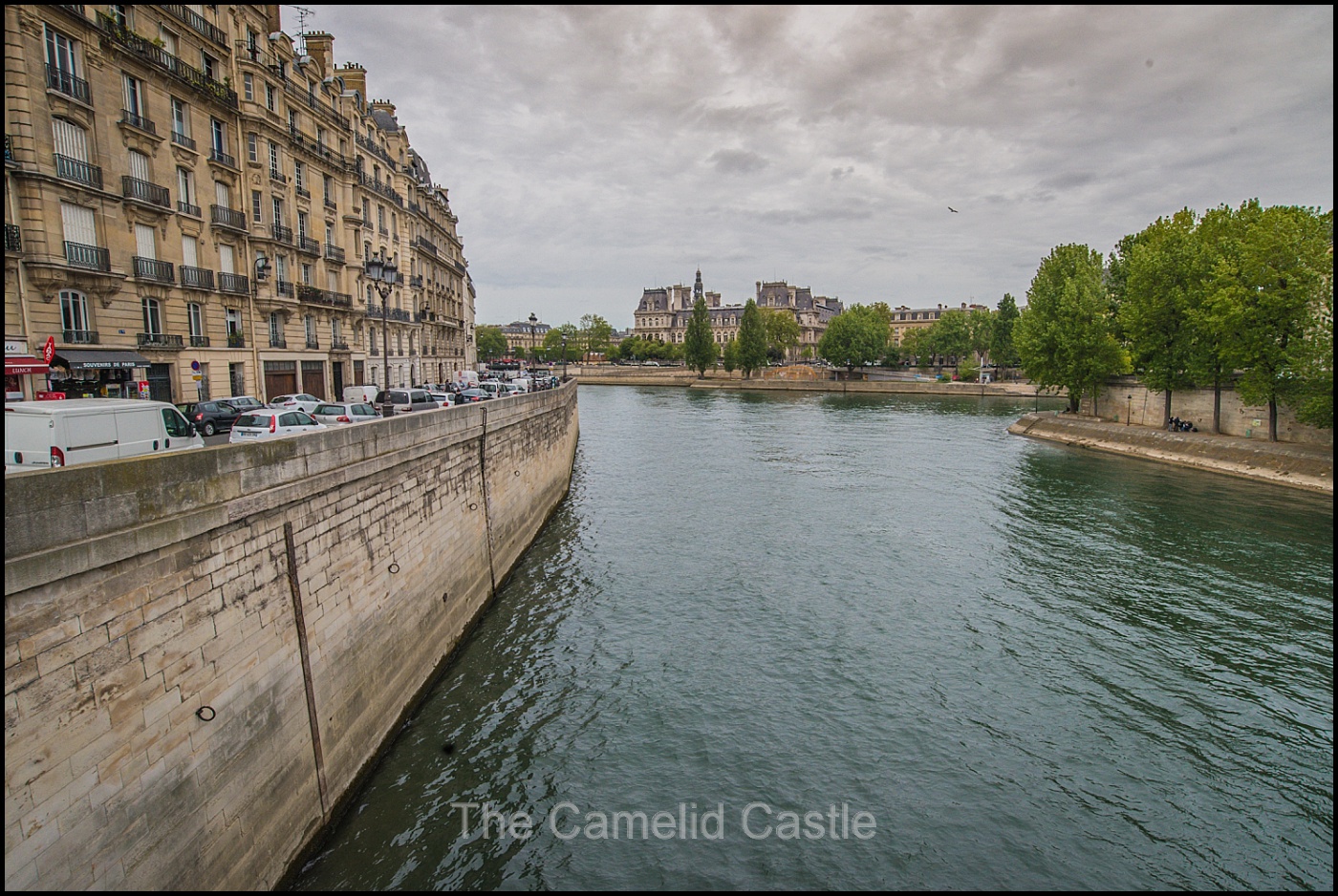 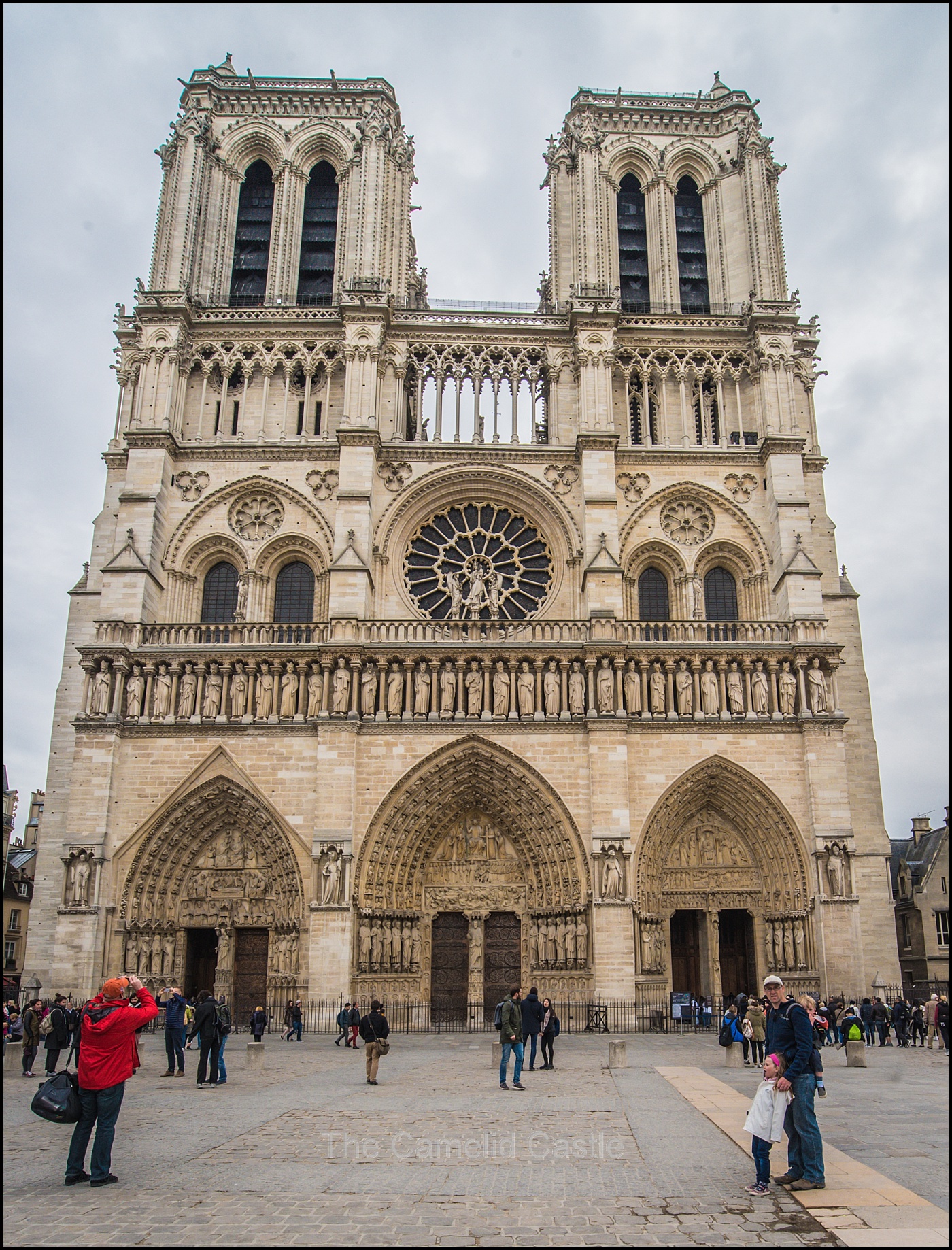 It was now approaching 1pm and we were all hungry. The plan for lunch was to head to our favourite Parisian falafel place: L’As du Fallafel in the Marais district.  It wasn’t too far to walk from Notre Dame (everywhere is Paris is either walkable or easily reached on metro or RER).   However, when we got there everyone else in Paris had the same idea as us and there was quite a big line waiting for both takeaway and a table. The problem with great falafel is that it gets more popular every time we visit. People now line up outside the restaurant taking selfies!

Given we were cold, and in need of both a sit down and a bathroom, we were keen to get a table somewhere.   Anto had also read good reviews of The falafel place opposite, Mi Va Mi.  Since there were currently free tables and no lines we decided to give it a try. Our order for the day was three of the falafel pitas, which appeared in a very short time, freshly cooked and had excellent fried eggplant, lovely bread and salad.  Anto and I both agreed that the falafel wasn’t quite as good as the L’As du Fallafel falafel, but all around it was very good and we’d go back. We now have 2 great falafel options in Paris…..

Full of falafel we walked down to Le BHV Marai for some shopping.  BHV (Bazar de l’Hôtel de Ville) is one of our favourite department stores in Paris. We had limited shopping time in Paris but managed to do a little shopping in BHV (where the kids did well).

We then wandered across the road to check out the Hôtel de Ville, Paris’ city hall. Astrid and Soren remembered the carousel that is in front of Hôtel de Ville. In January 2016, they may have scored a large number of rides on that carousel on our last day in Paris when we were using up spare euros. 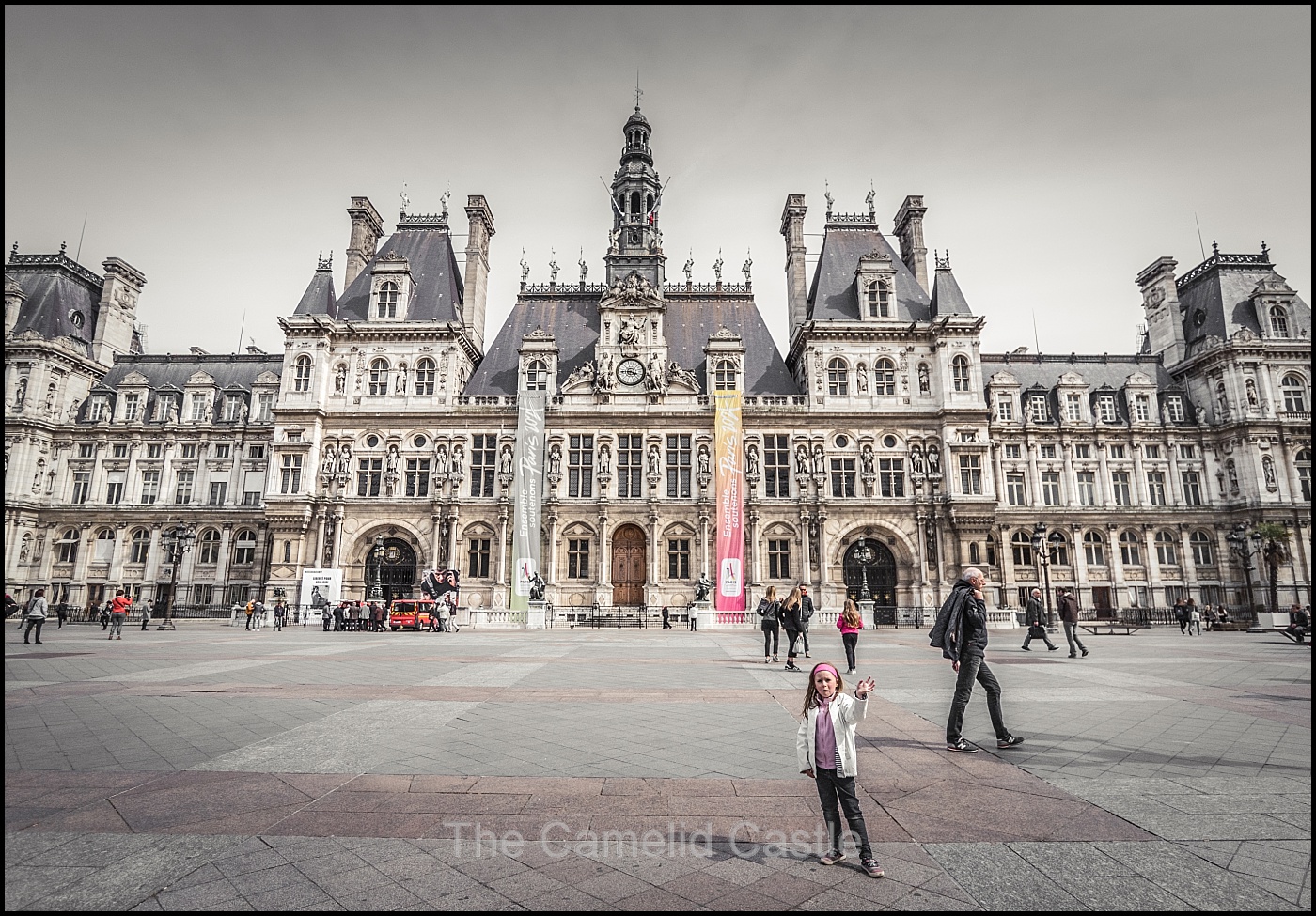 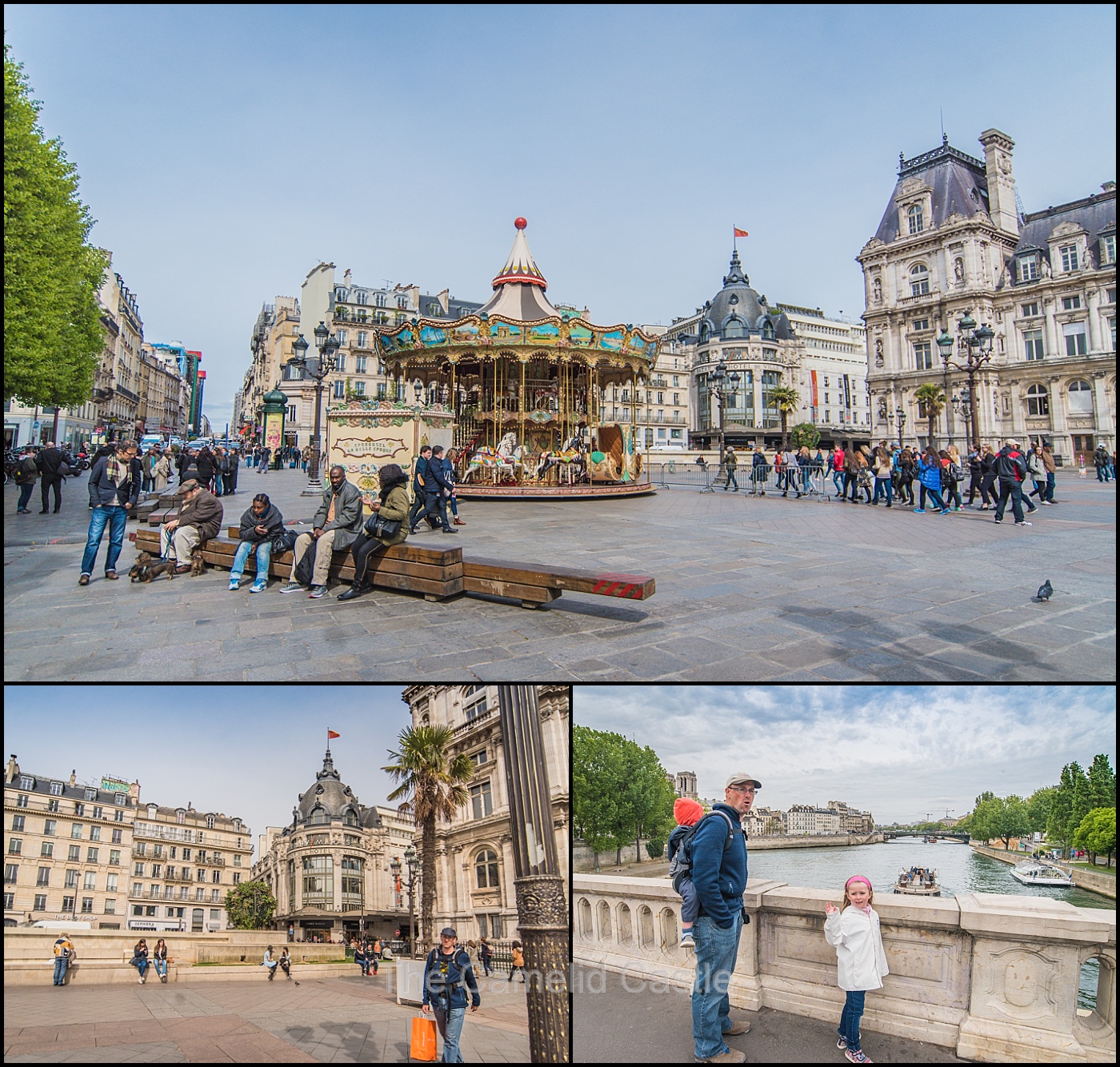 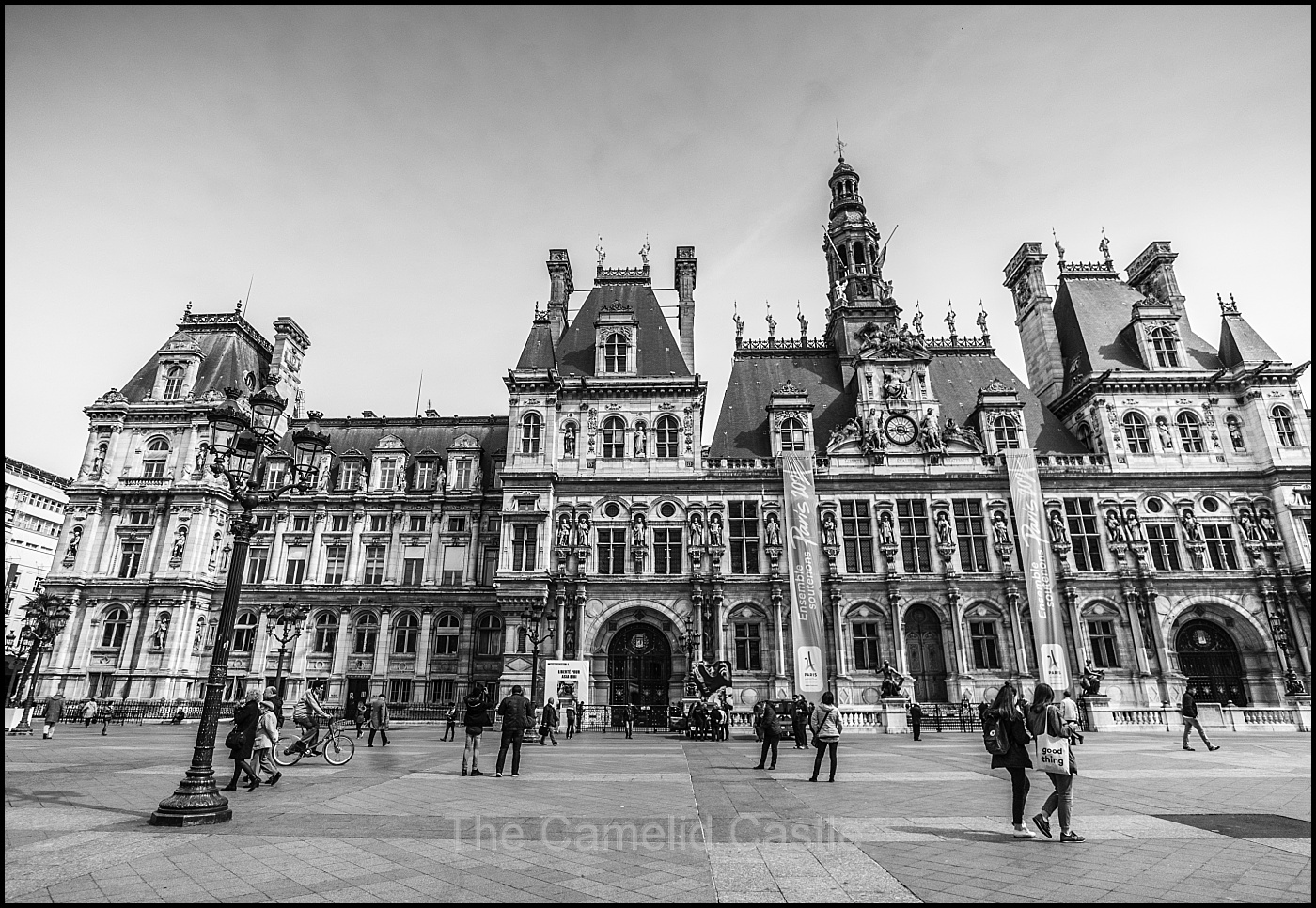 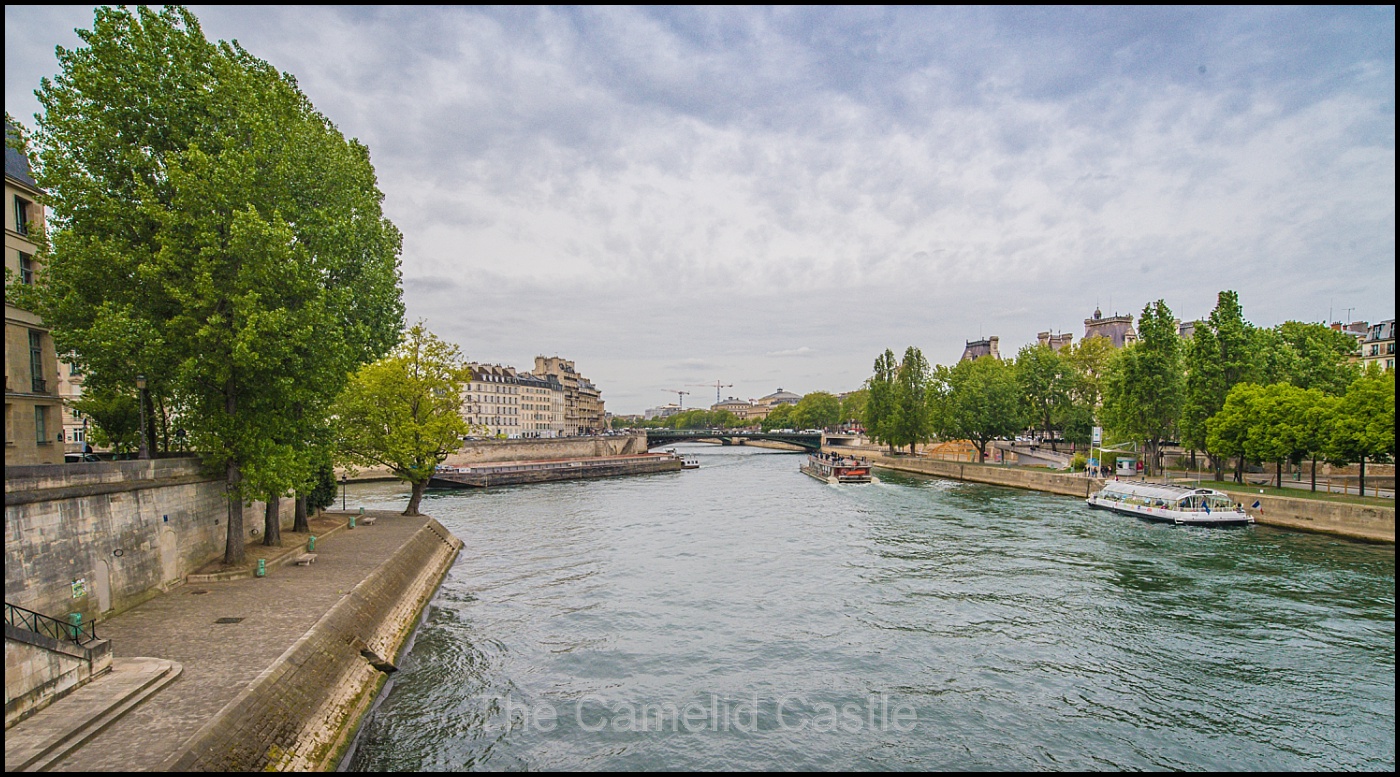 We then wandered down the street to some other shops we knew were in the area to pick up a few more things on our souvenir and gift list, and then took the kids back to their favourite park at Les Halles for a play. It was getting close to 5pm and the park was pretty busy. 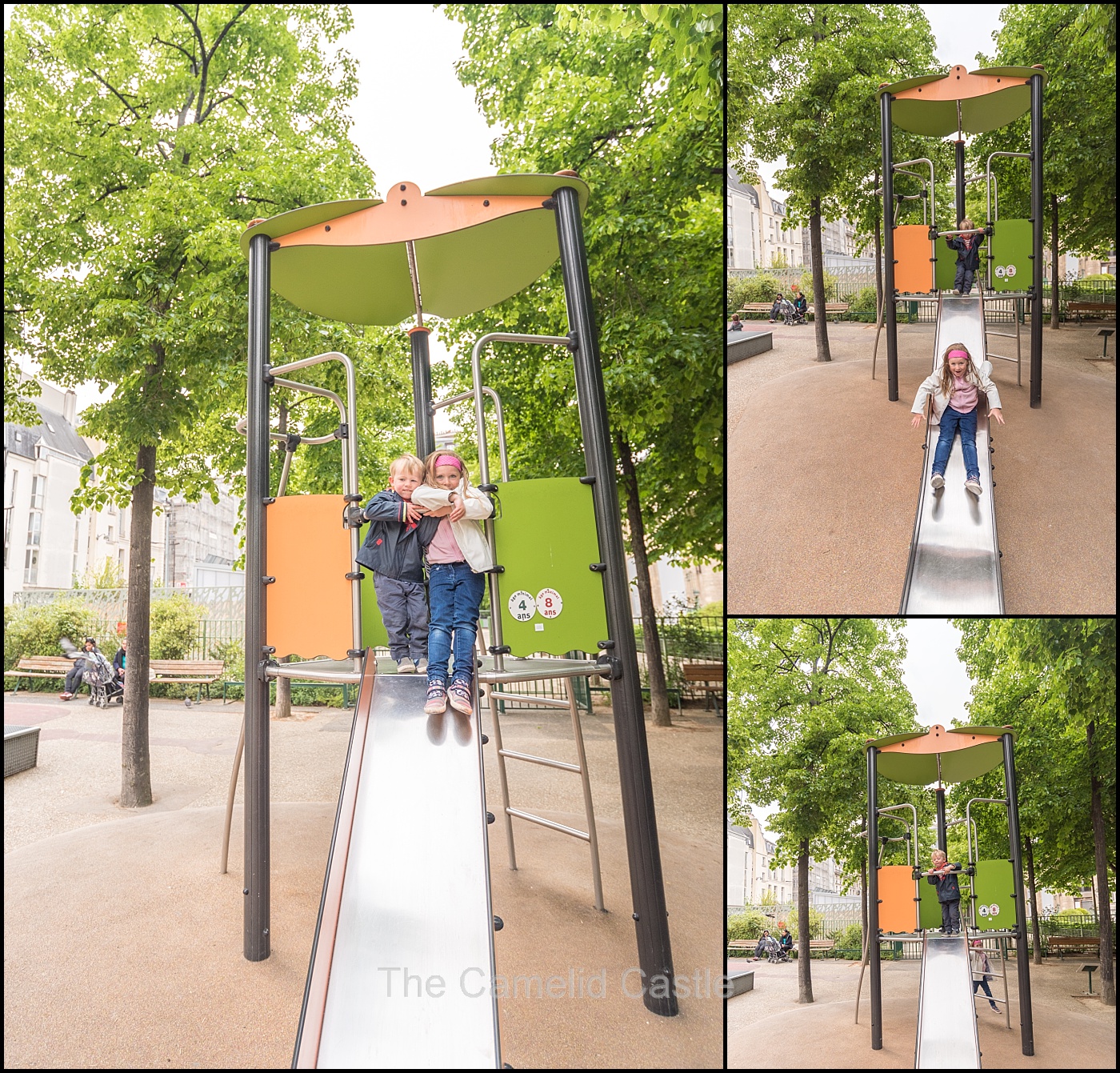 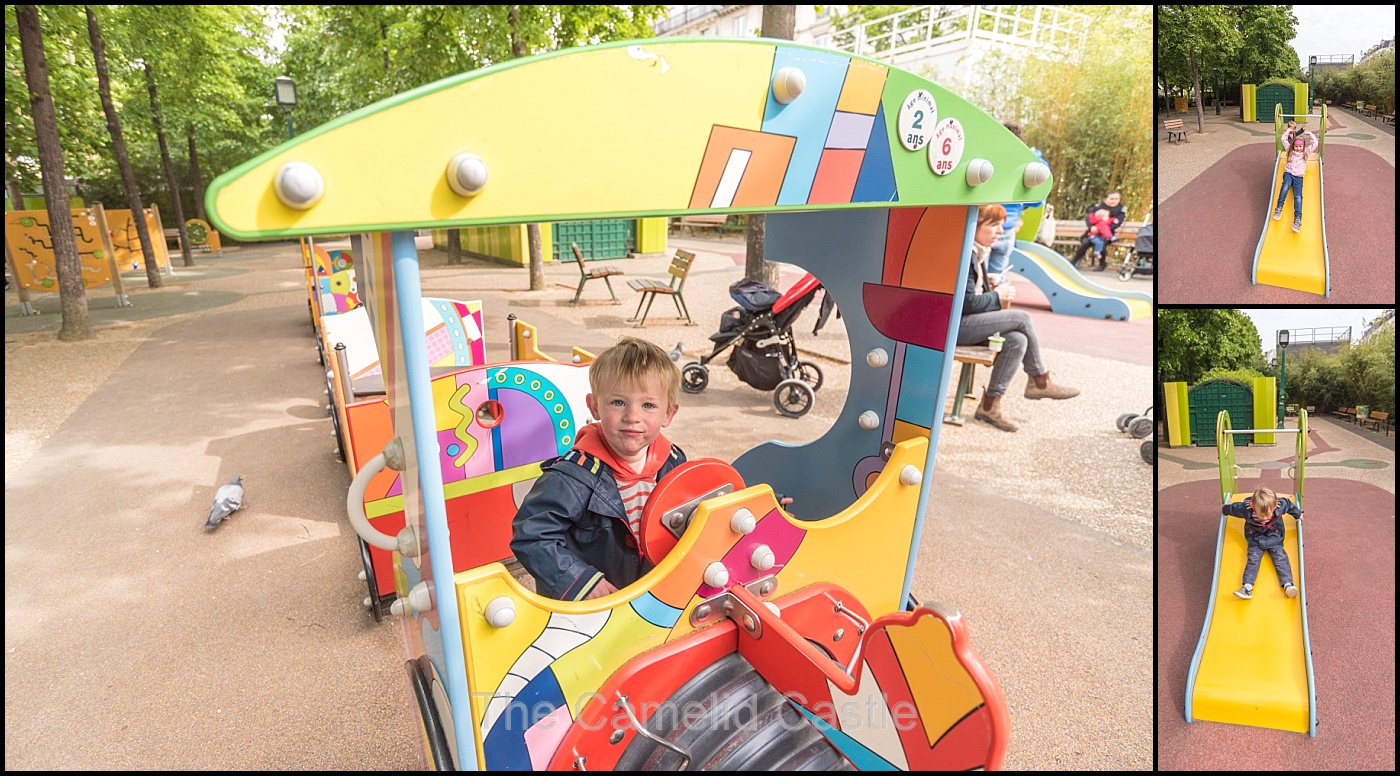 In an almost nightly ritual we had to drag them away from their beloved park and head the short distance back to Rue Montorgueil to pick up some fresh fruit and veggies, baguette and pastries for dinner. It never gets old being able to pick up all your fresh dinner supplies on the street you are staying on! 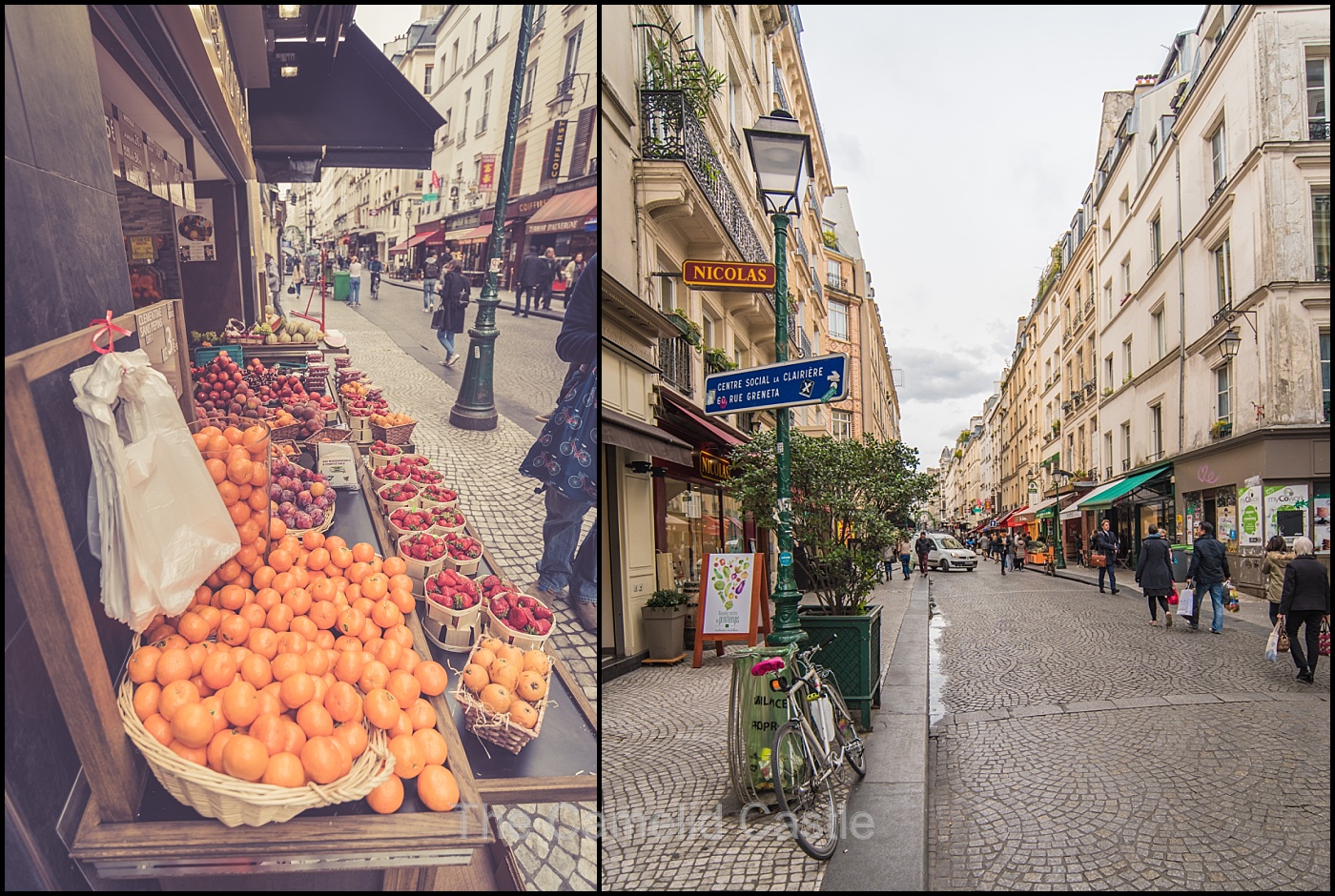 In need of another early night, dinner was again in our apartment. Anto whipped us up some spätzle with mushrooms (and chicken for non-vegies), asparagus, green beans with garlic, salad and fresh baguette and butter.  Given the kitchen is the size of a shoebox he did well!

Dessert was fresh (giant) raspberries and cream. Raspberries are in season and we got 3 big punnets for 4 Euros so had to scoff a fair few raspberries in our last couple of days in Paris.  With limited time left to consume patisserie, there was also a tart chocolate aux noisette and a cafe eclair, both delicious! 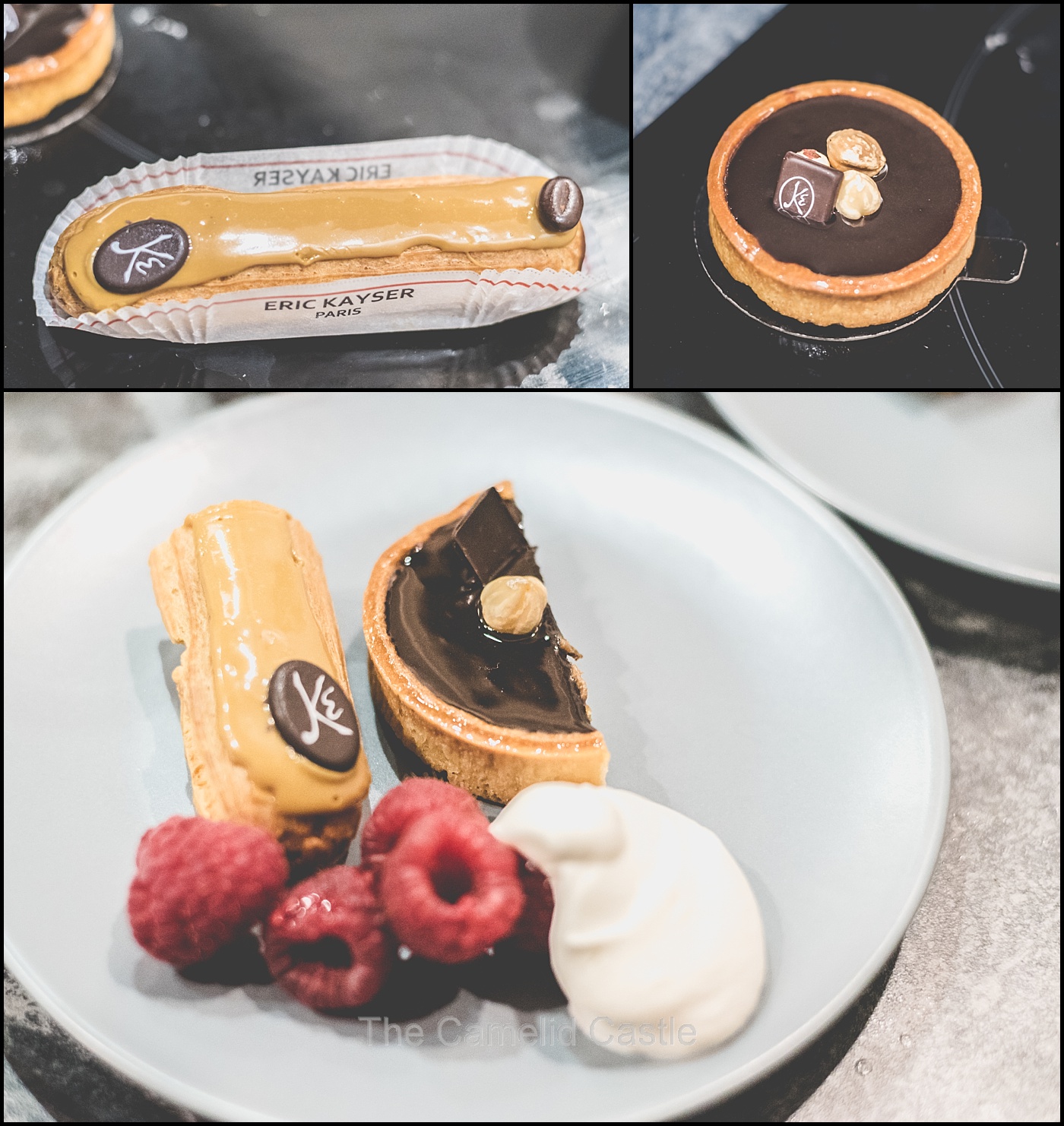 Another day in Paris done and dusted, we were all a little sad that both our time in Paris and the holiday itself was coming to an end.  Despite how much time we have spent in Paris over the past few years, we can always fill the days easily with sight-seeing, shopping and food. There definitely seems to not be enough time for all the food!  On the upside we still had a couple of days to go before heading back to Singapore. The next day was one we’d been looking forward to since planning the trip, a return to Monet’s Garden in Giverny, Normandy.

Daily statistics for Tuesday the 25th of April 2017, in Paris France – the temperature range for the day was 5 to 11 degrees Celsius, with rain and a mean temperature of 8 degrees and a windchill sitting around minus 4 or 5 degrees for the majority of the day, no wonder we were cold!  Totally different to the beautiful Spring day the previous day.  The total walking for the day was 12.4km.

Up next – our day in Giverny in Normandy visiting Monet’s Garden in all it’s Spring glory and exploring a little more of the towns of Vernon and Giverny.