Every year in March, Canberra puts on a range of activities for Canberra day, including the annual balloon spectacular.  We’ve had rather bad luck the last few years with actually seeing the balloons launch, due to both bad timing and bad weather.  But this year, over the long weekend, we lucked out, we had a beautiful morning, a fabulous sunrise and even managed to chase the balloons down and see quite a few land!  It was totally worth getting up at 5.30am to see the excitement from the kids, and enjoy a beautiful (and mild) Canberra Autumn morning.  You can’t beat this view…… 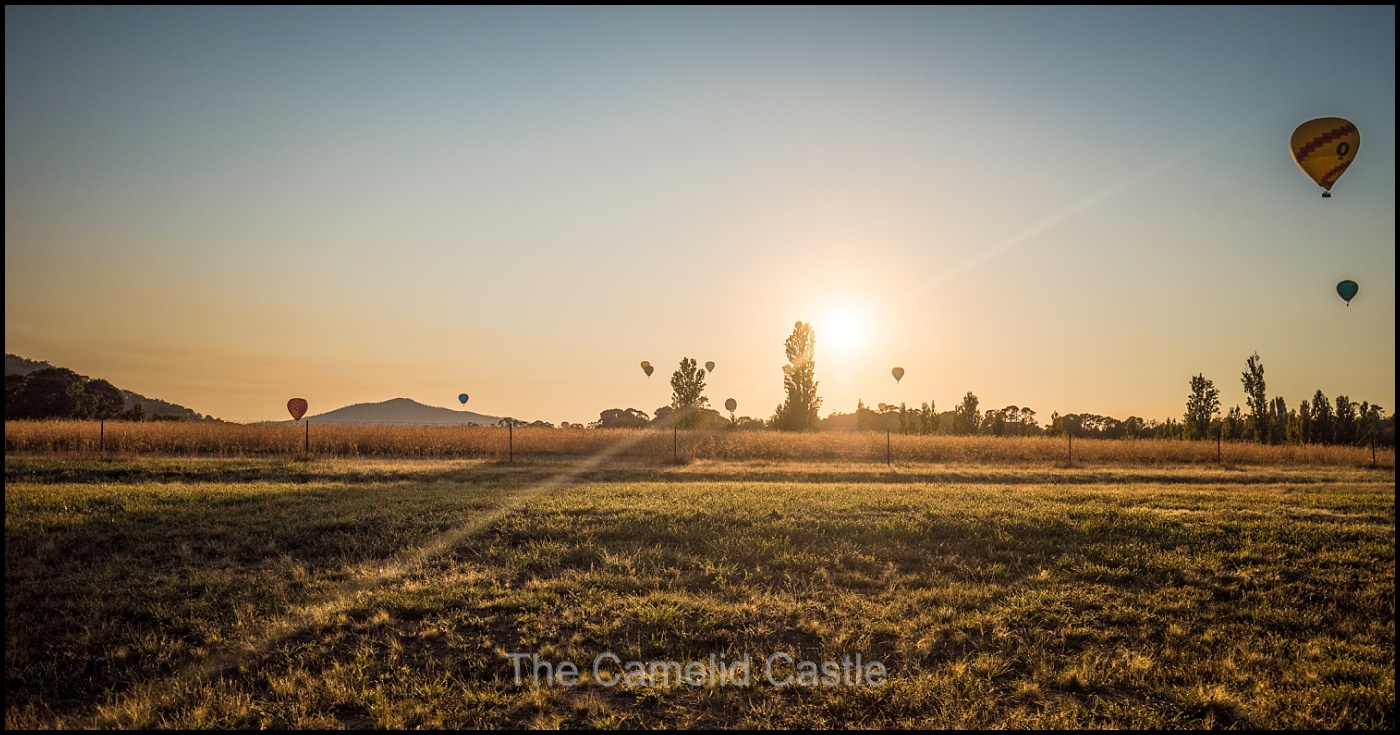 If you’d like to see any of our balloon photos from previous years (when they actually managed to inflate and launch) they are here….

Being a long week-end, a mild temperature, and non-windy conditions…….half of Canberra was out prior to 6am ready to see some balloons!  It was the second day of the 10 day festival but the crowds had not diminished.  Anto and I, having worked in the Parliamentary triangle for many years, know all the good and sneaky parking places, so managed to snaffle a park and headed over the launch area.

With the weather cooperating the balloons were just starting to inflate. The kids love seeing the balloons starting to take shape, and those bursts of the burner flame are both spectacular in the pre-dawn and keep you nice and warm on a chilly morning! 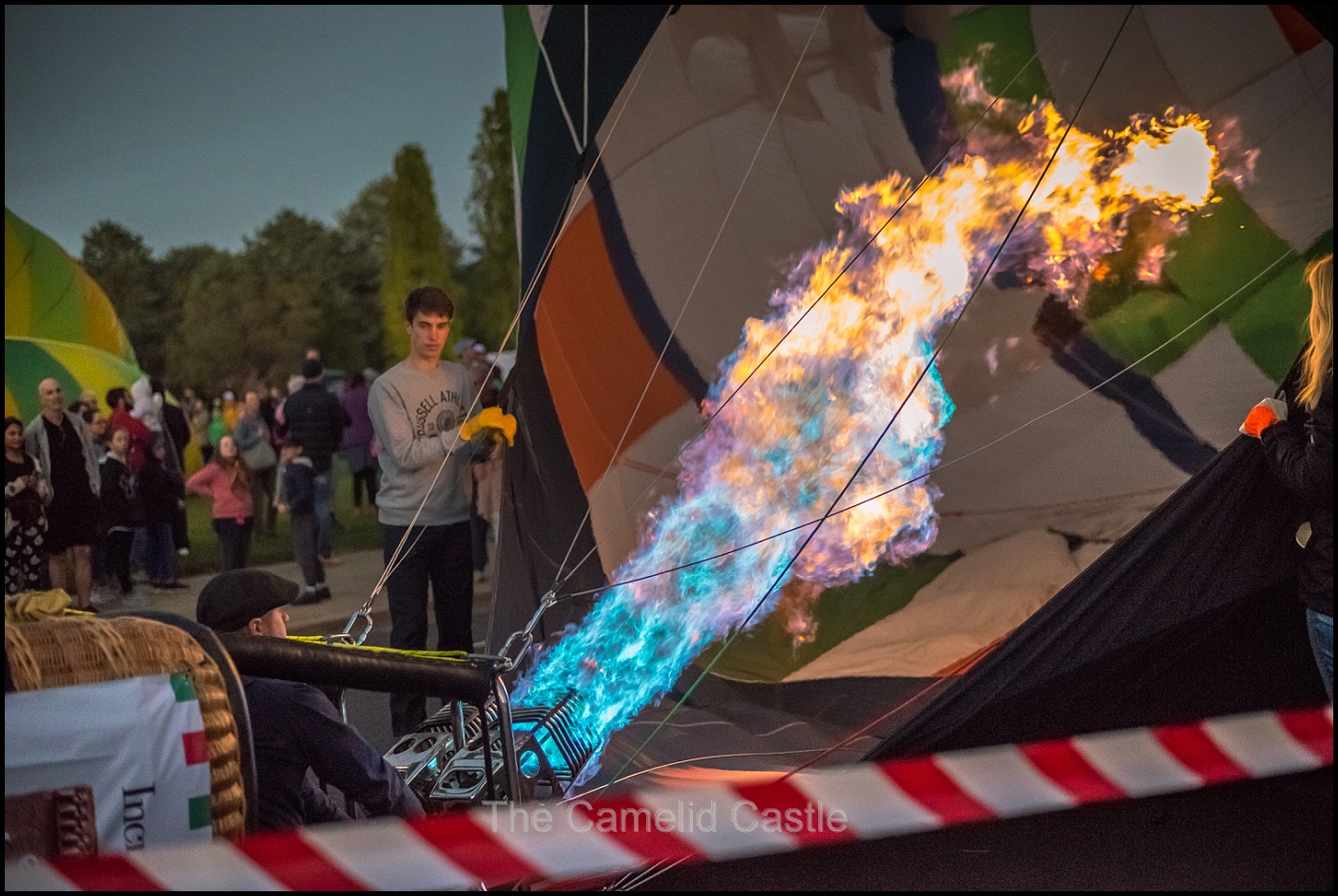 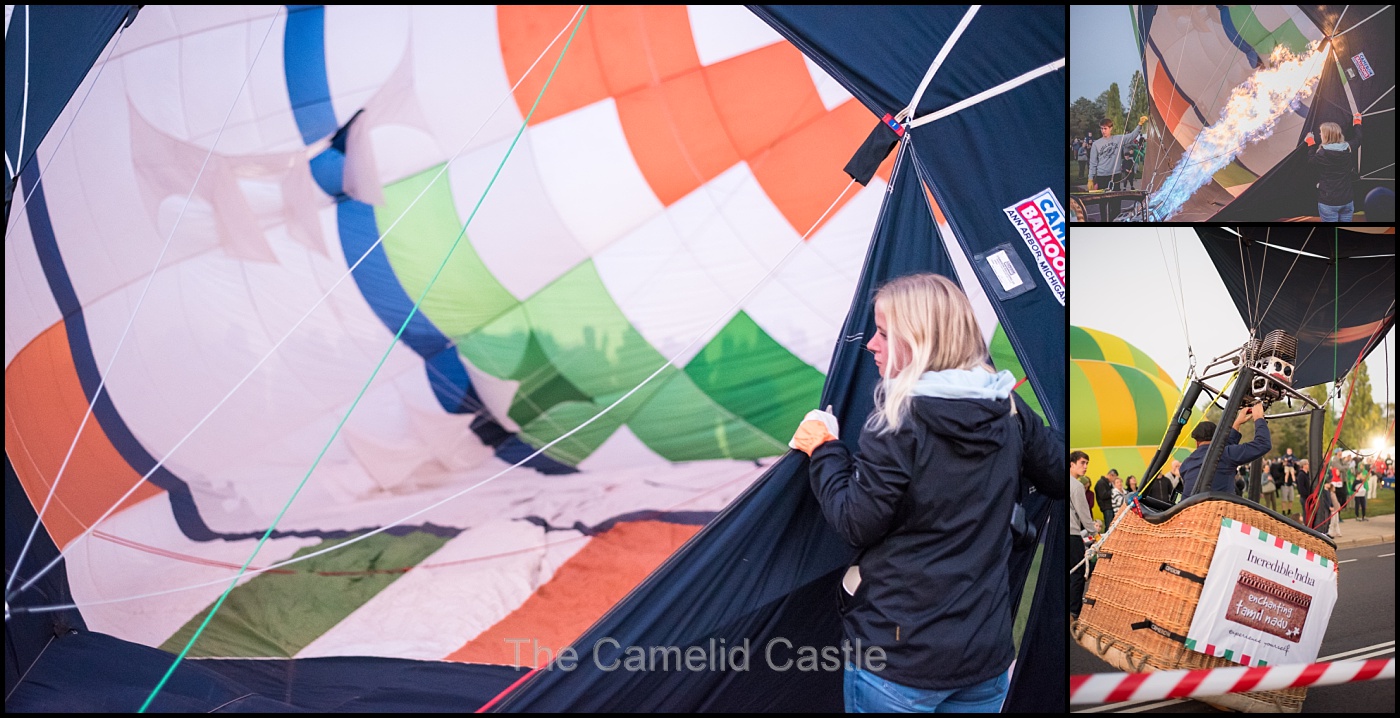 Pretty soon, there were a few balloons upright and they were starting to lift off……… 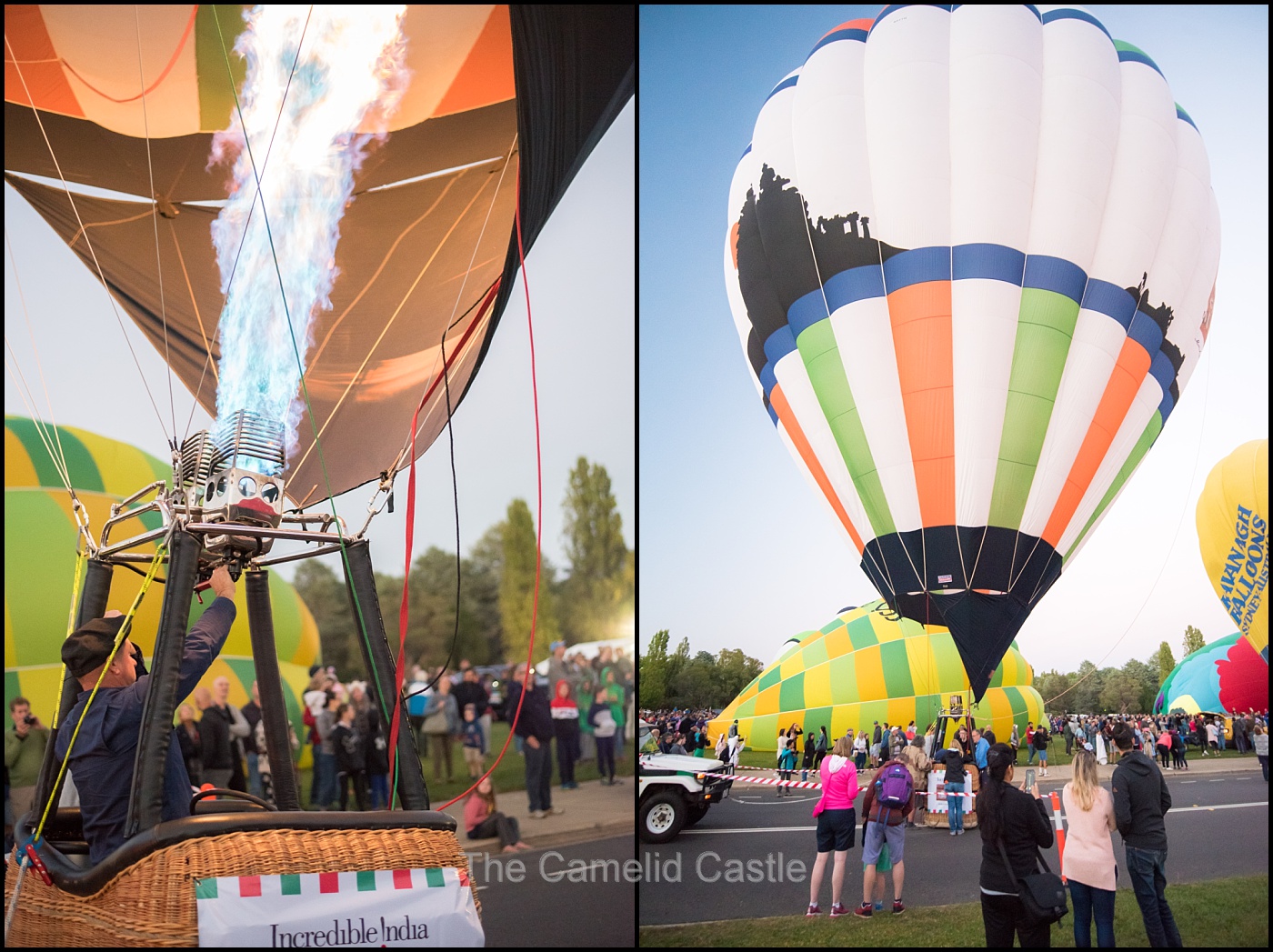 We always pack a picnic breakfast for the kids and this year was ham and cheese croissants.  They quite enjoyed munching on their warm croissants while watching the balloons pop up around them.  The adults were almost ready for our second coffee of the morning! 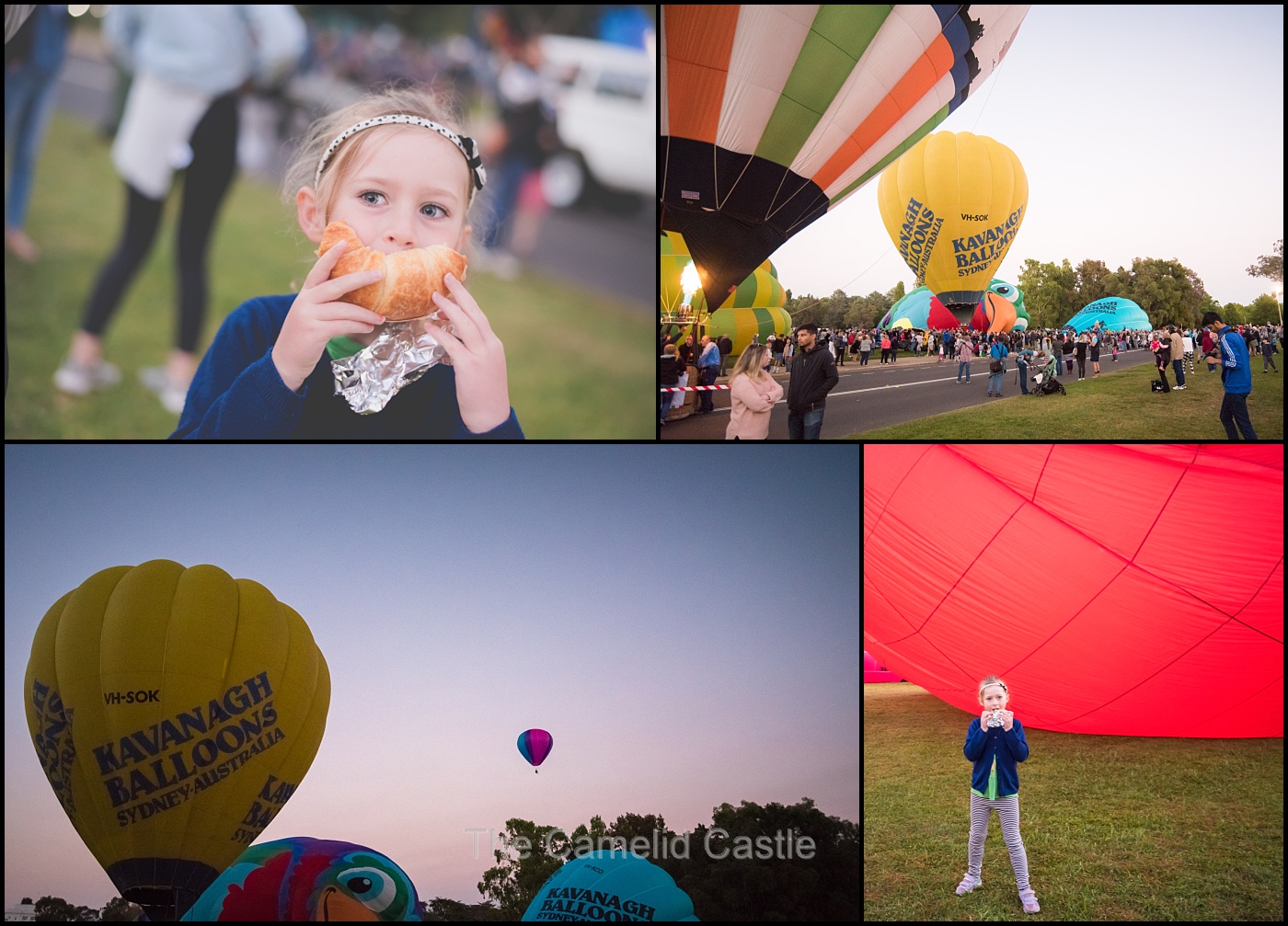 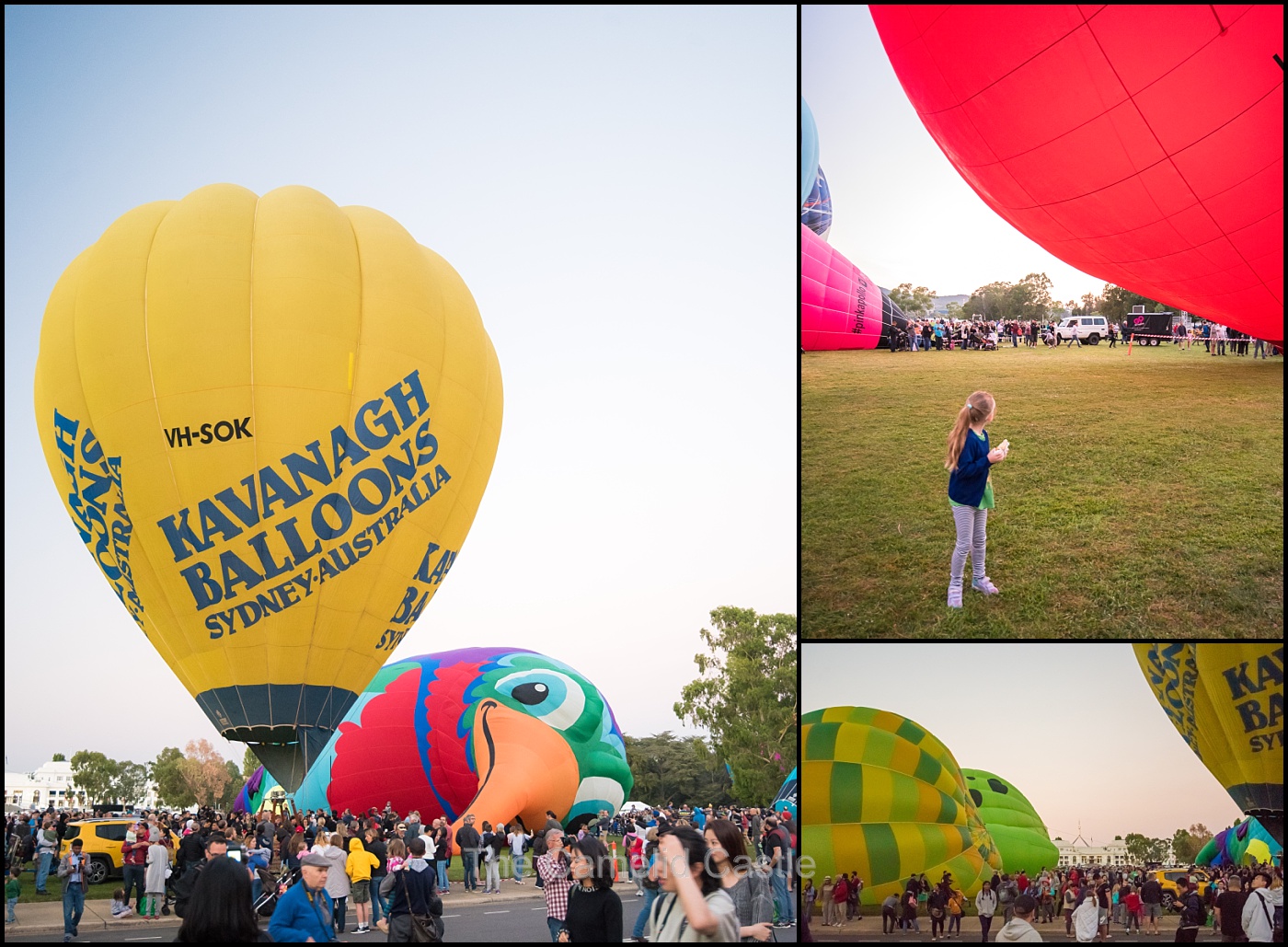 There was a beautiful sunrise as the balloons were quickly up, and starting to drift off towards to the lake……… 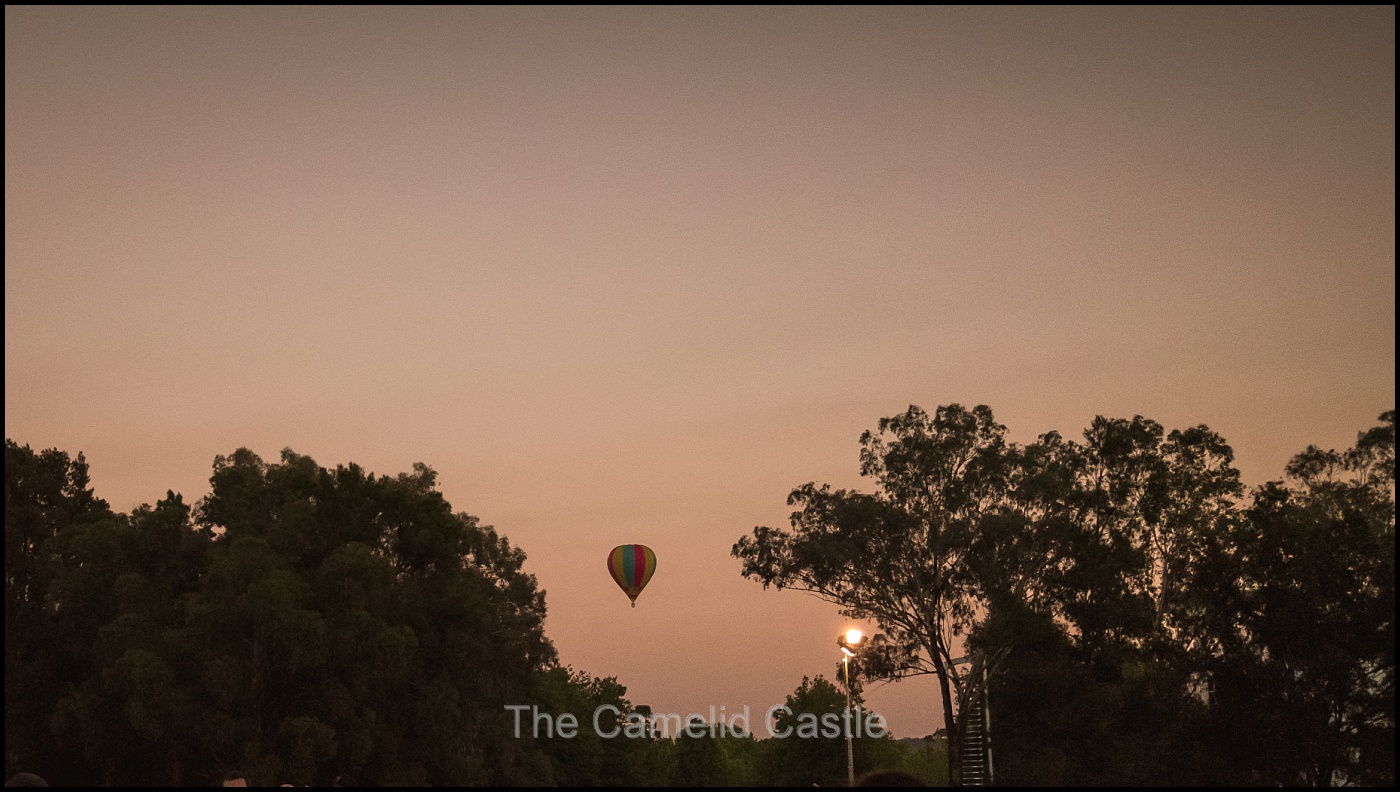 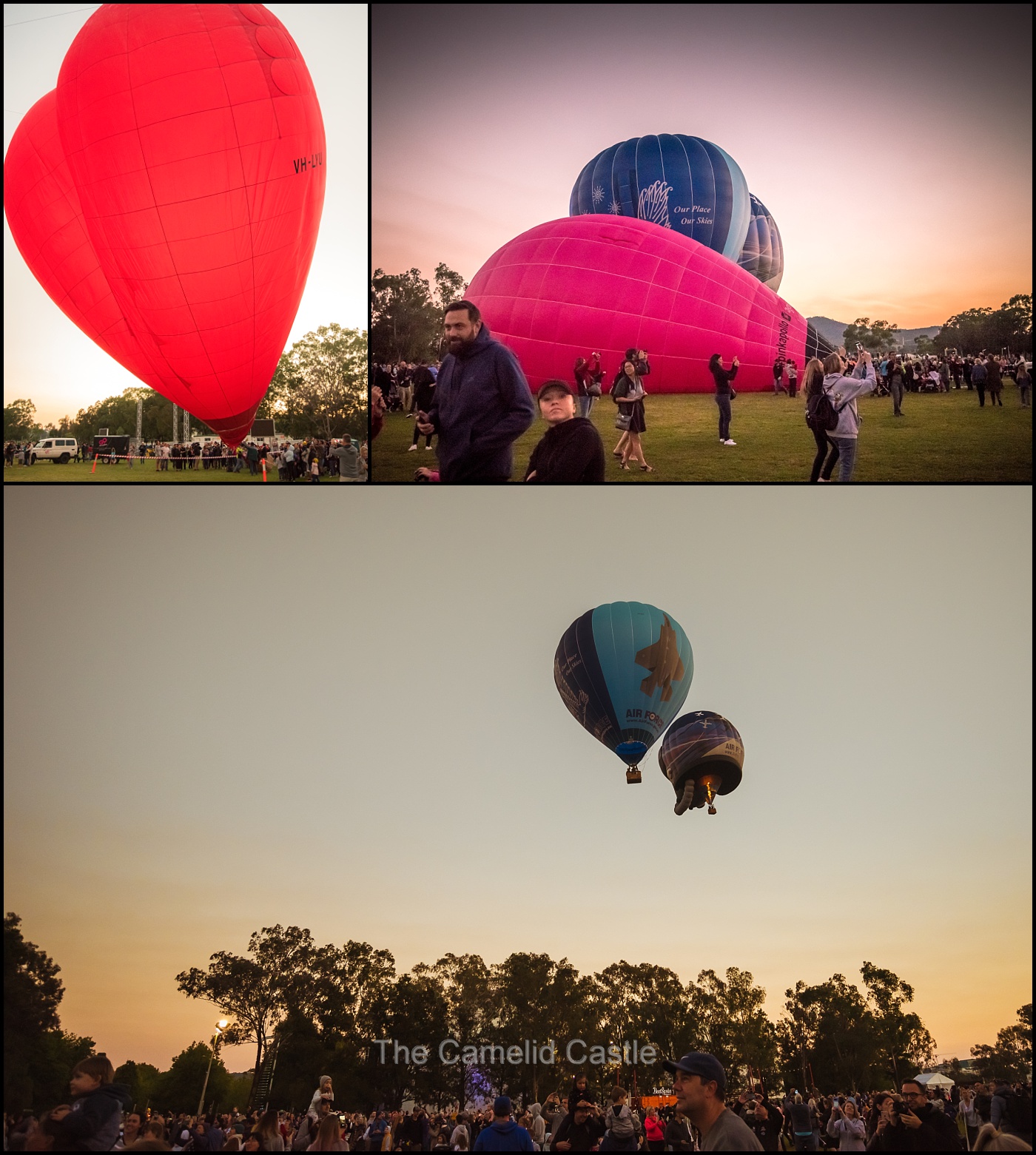 Every year there are a variety of different balloons, including an array of interesting shapes.  The kids loved the heart-shaped balloon and the air force helmet. The stand out favourites, though, were the giant green frog and the enormous hummingbird! 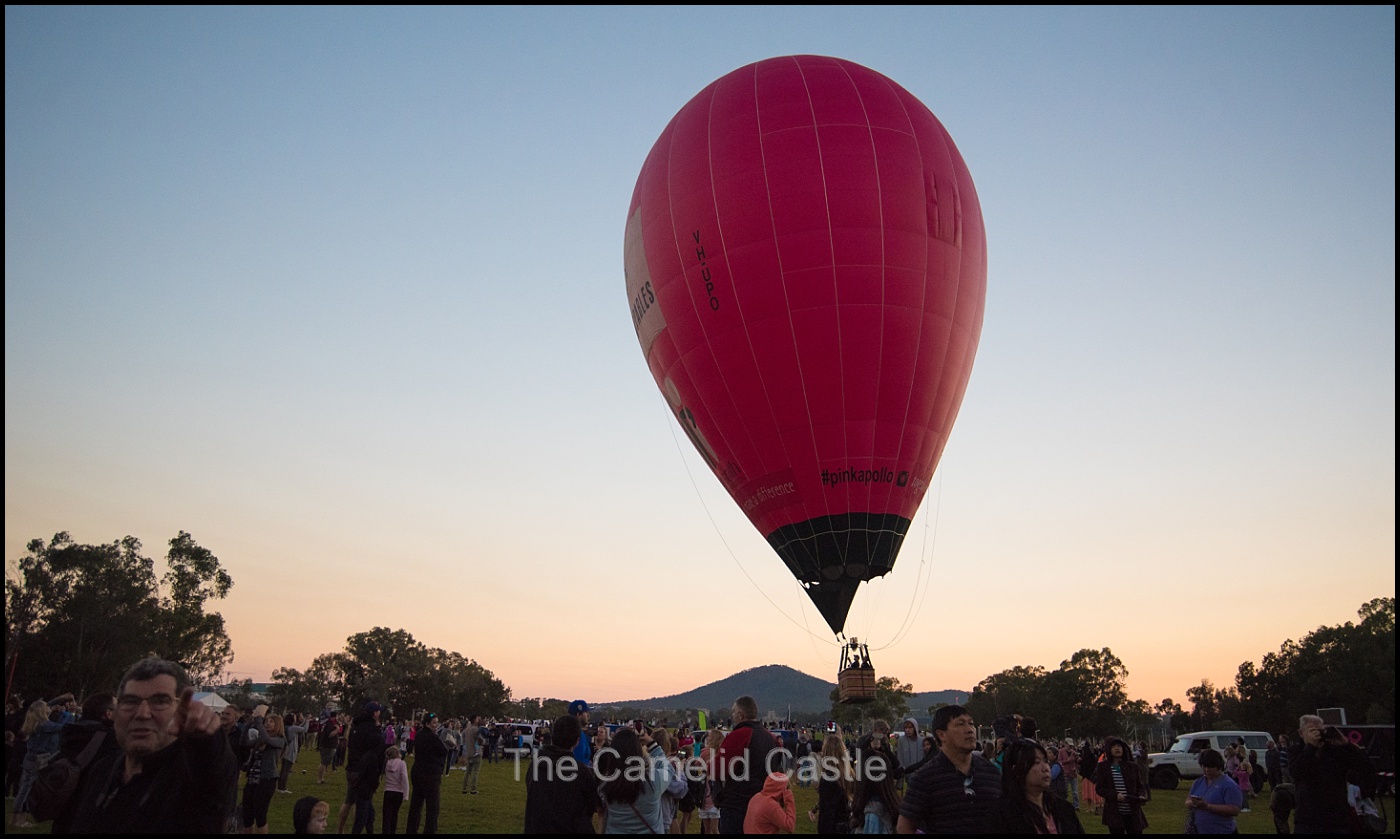 Pretty soon the skies above us were full of colour! With not much wind there was plenty of time to watch each balloon drift over our heads……… 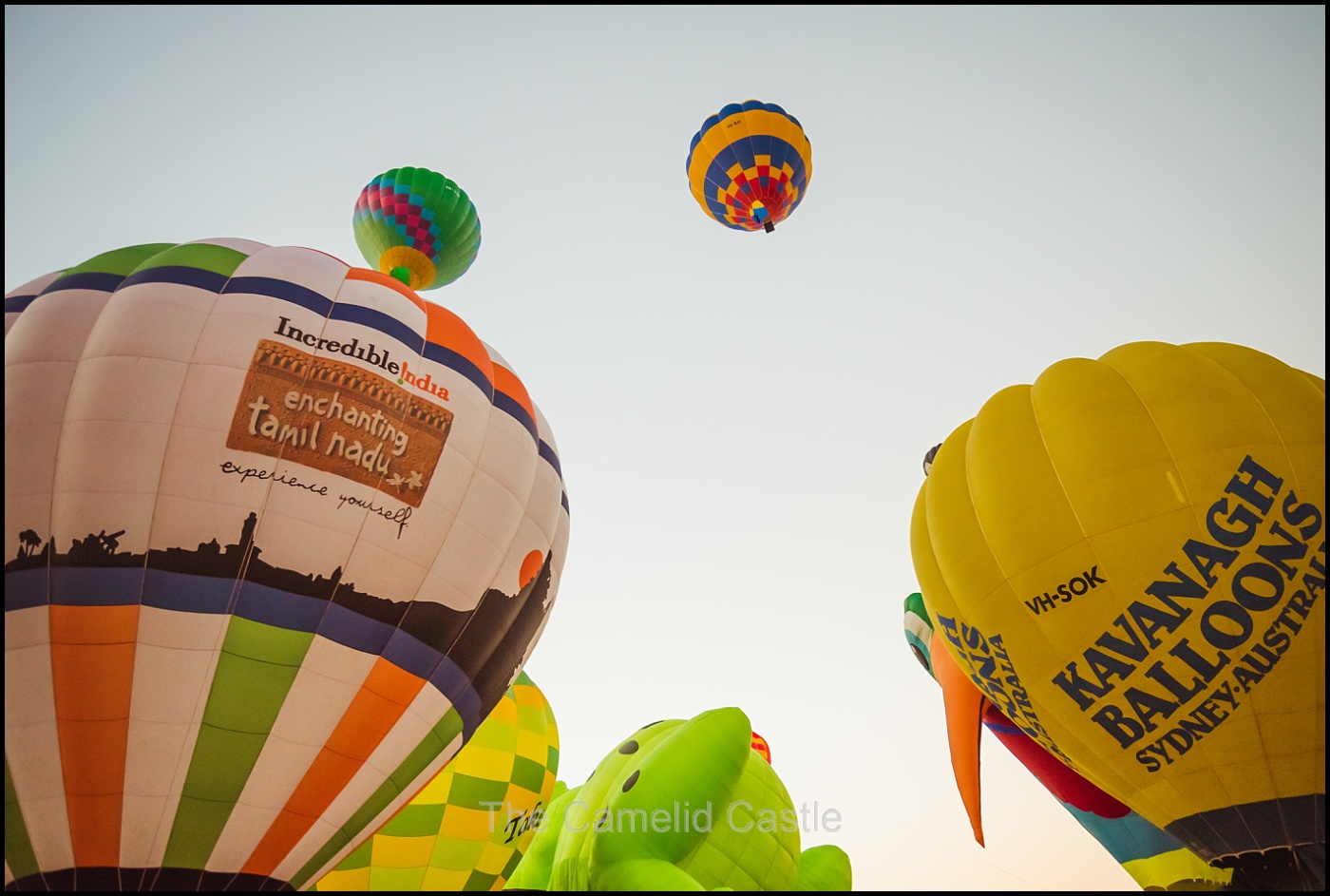 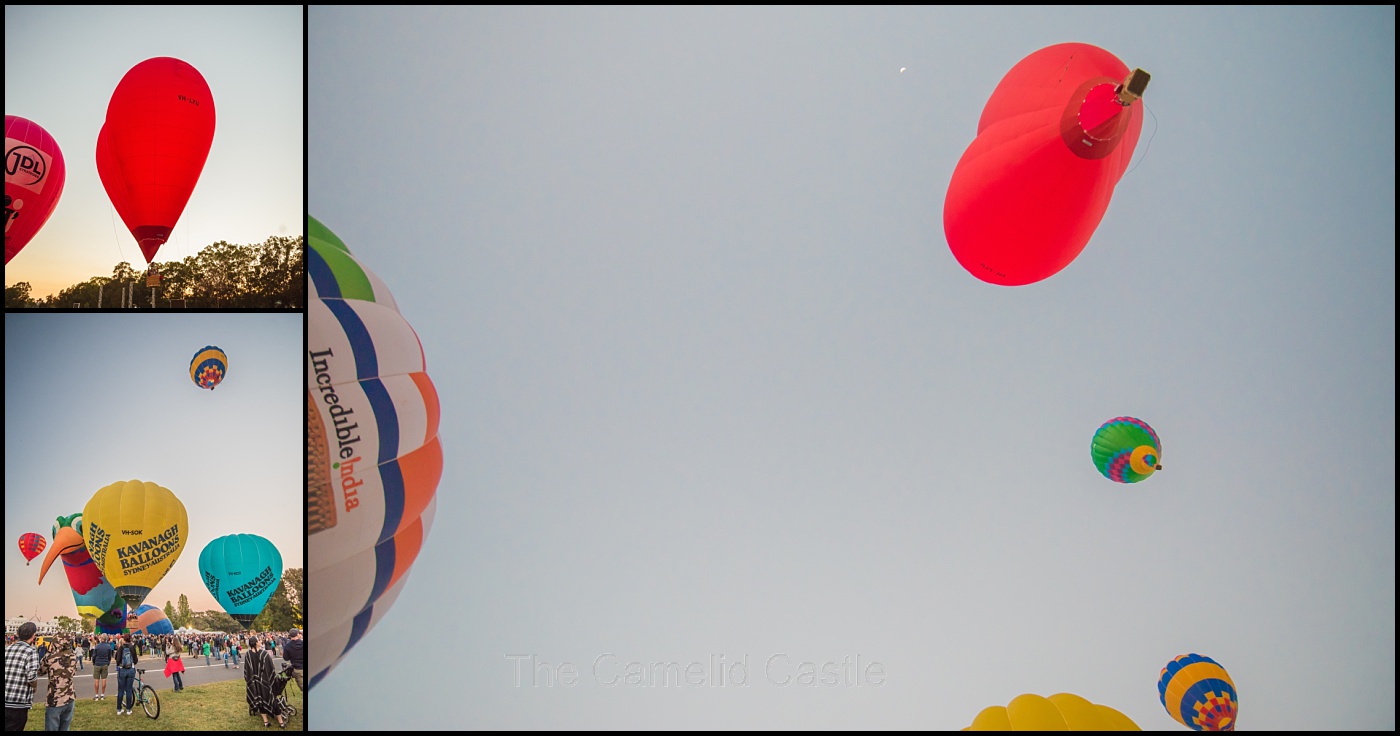 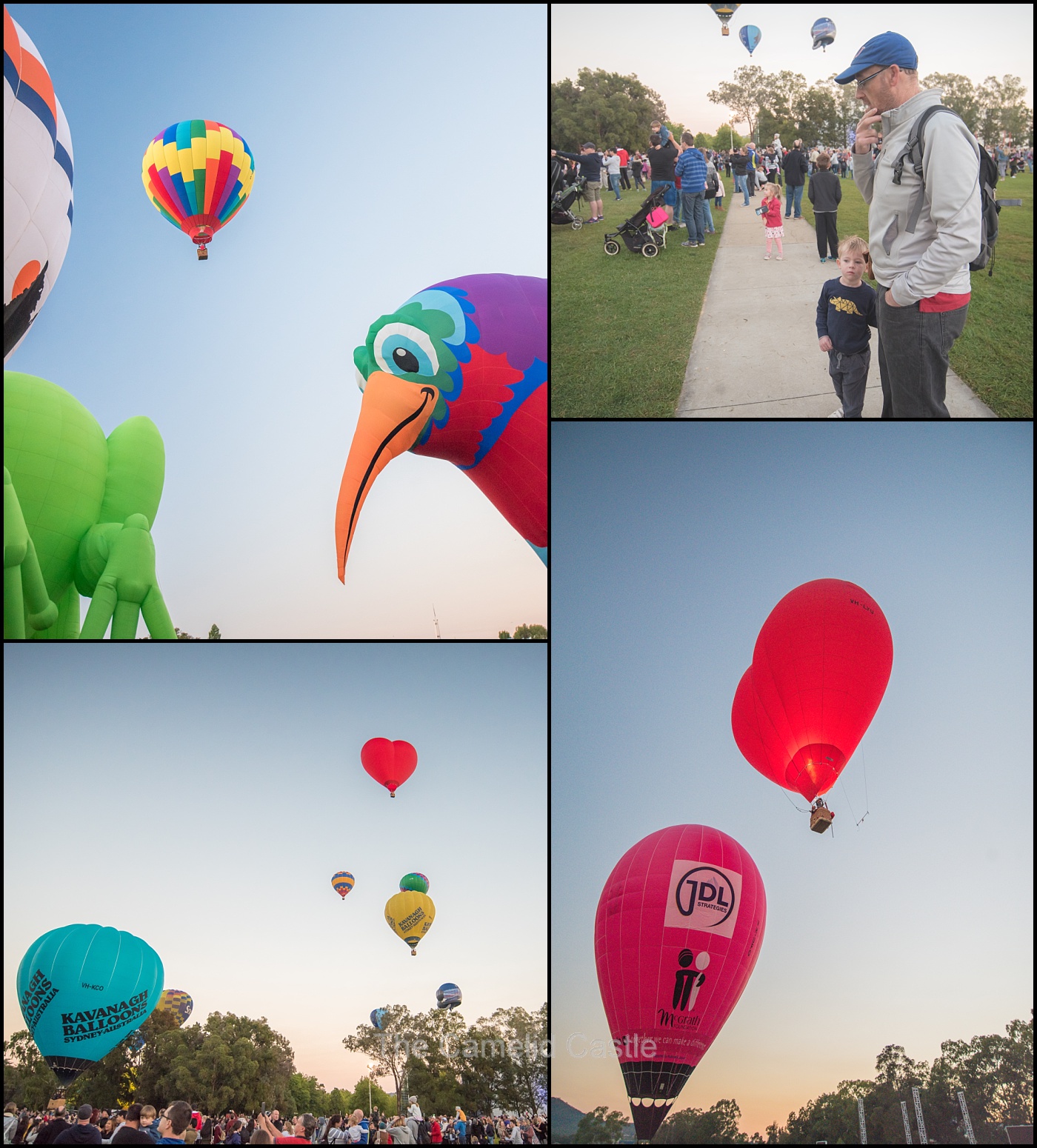 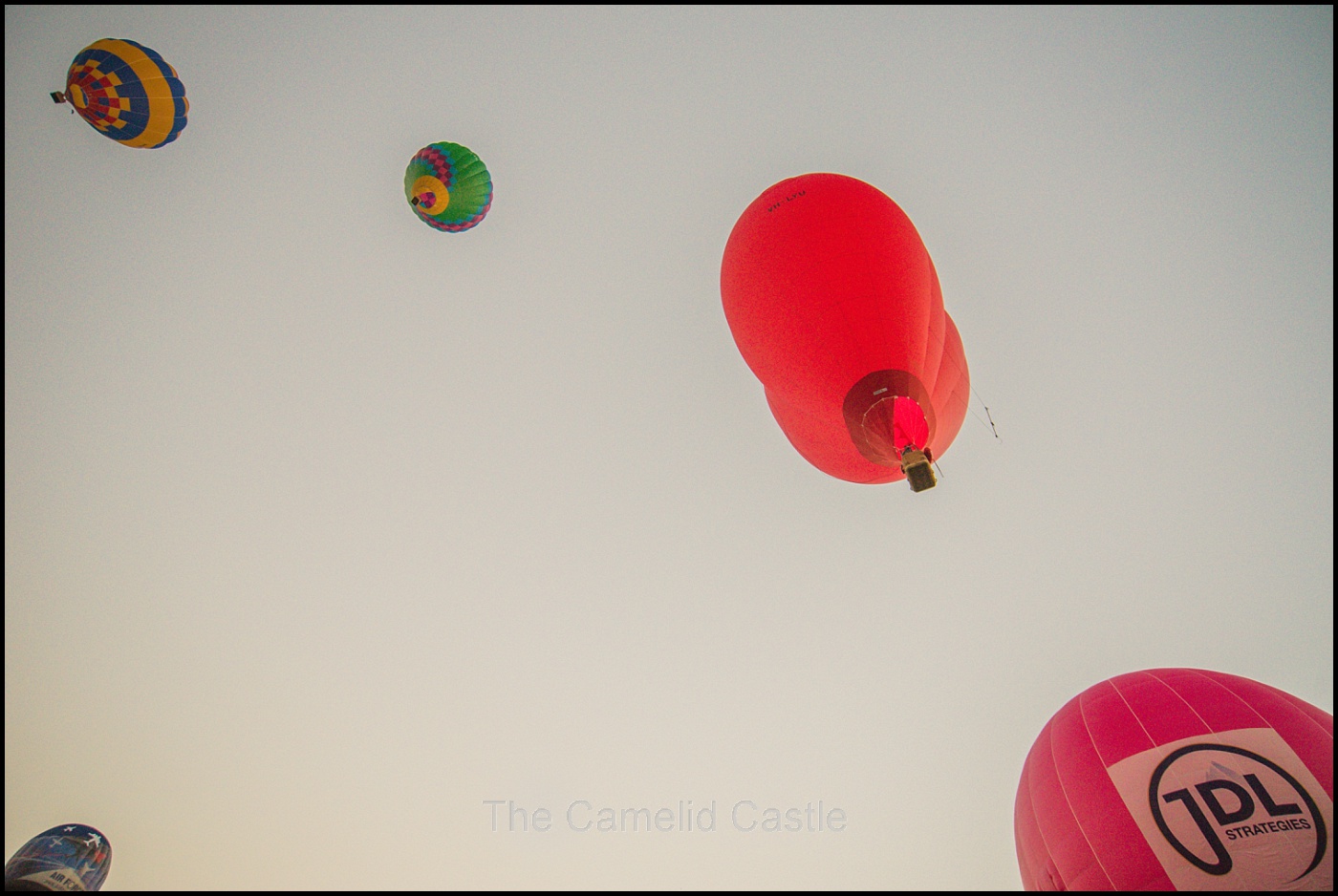 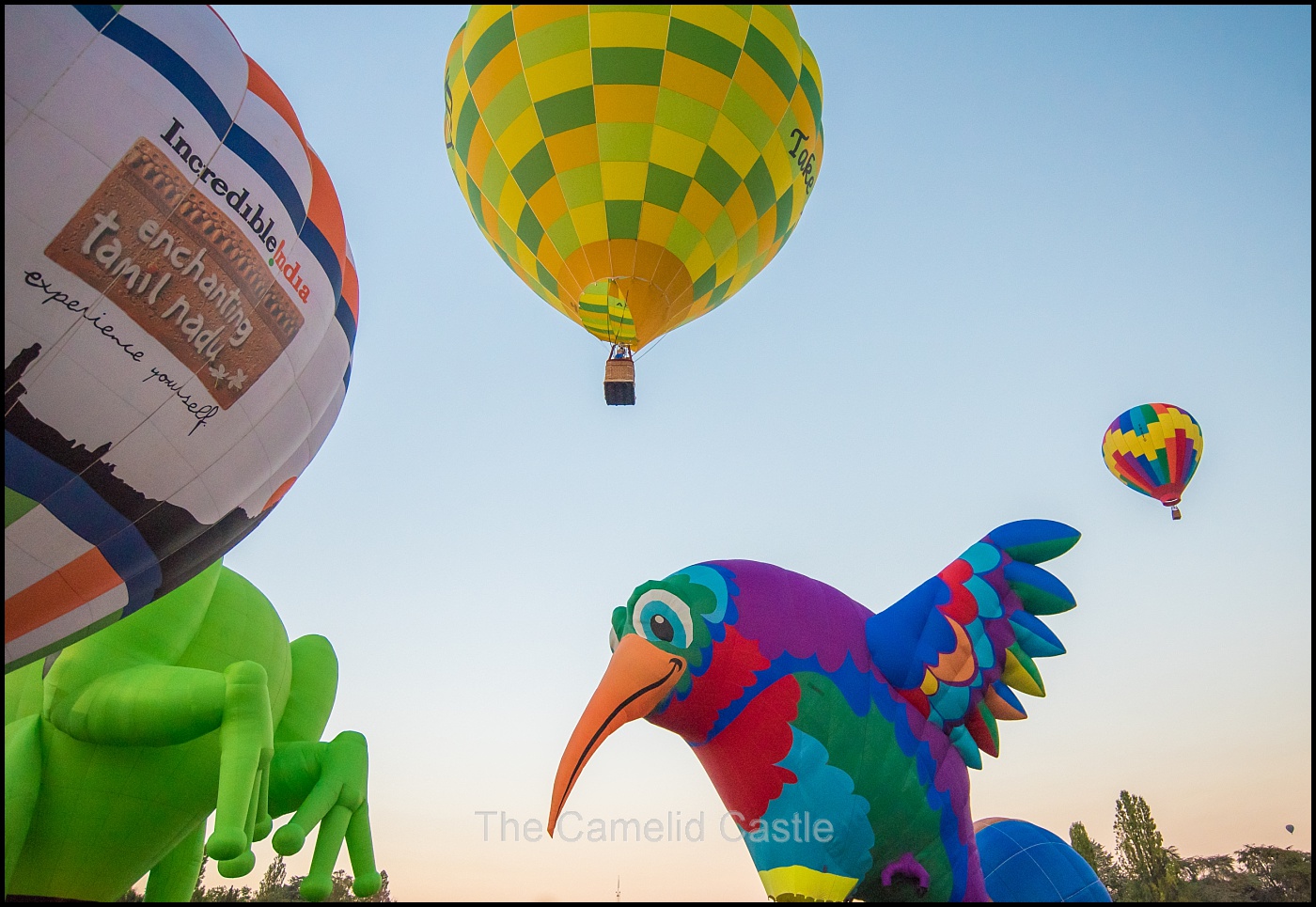 By 7am the vast majority of the balloons had inflated, and we wandered back towards the Treasury building as they floated off towards the lake, the sky still full of colour! 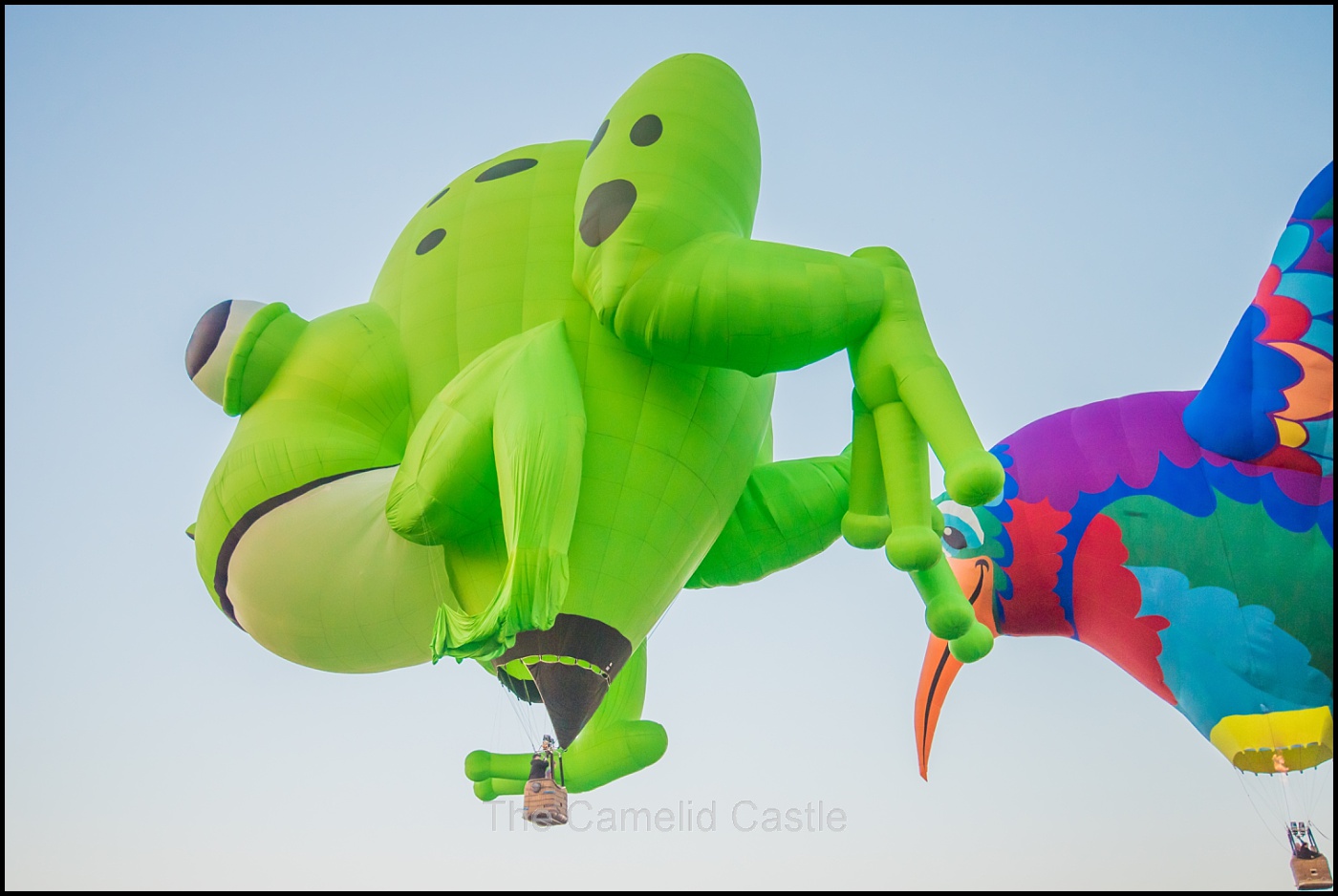 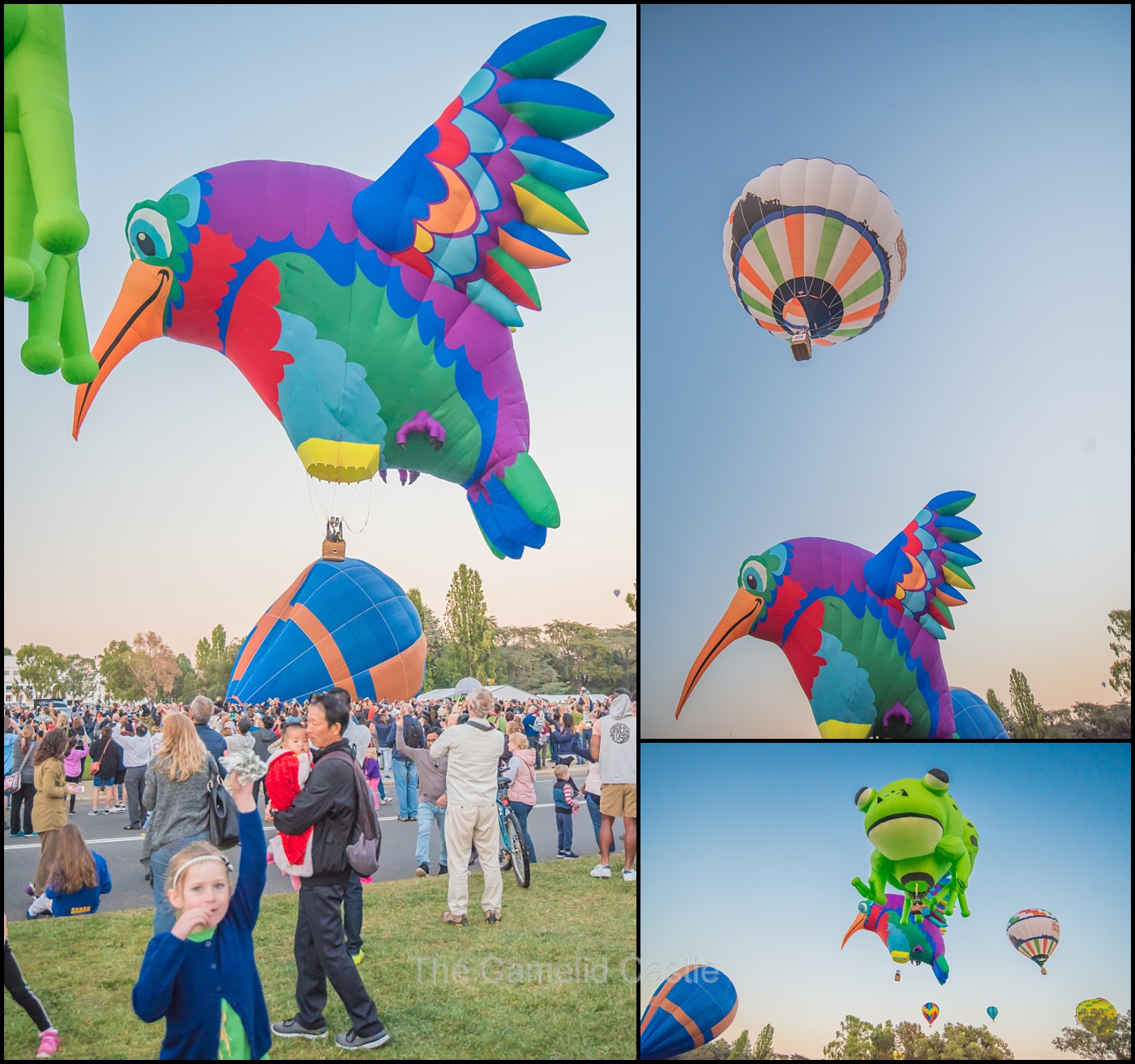 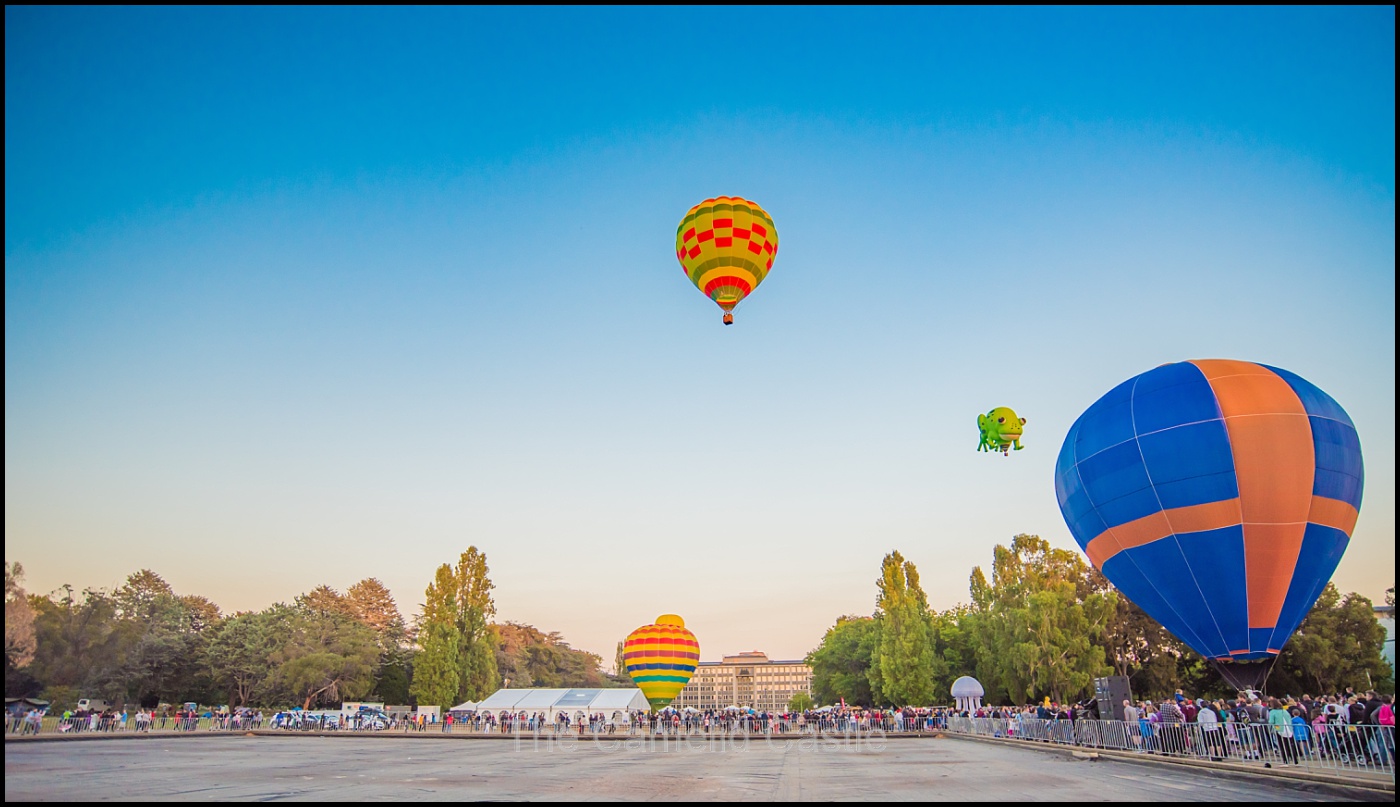 With the balloons moving quite slowly due to the lack of wind we figured we might follow them and see if we could watch them come over the lake, and in to land.  We also happened to end up in a stream of balloon pick-up vehicles so didn’t have any trouble locating their landing spot!

Not far from the Western edge of Lake Burley Griffin we stopped to watch the balloons drifting over.  Another fine Autumn morning in Canberra! 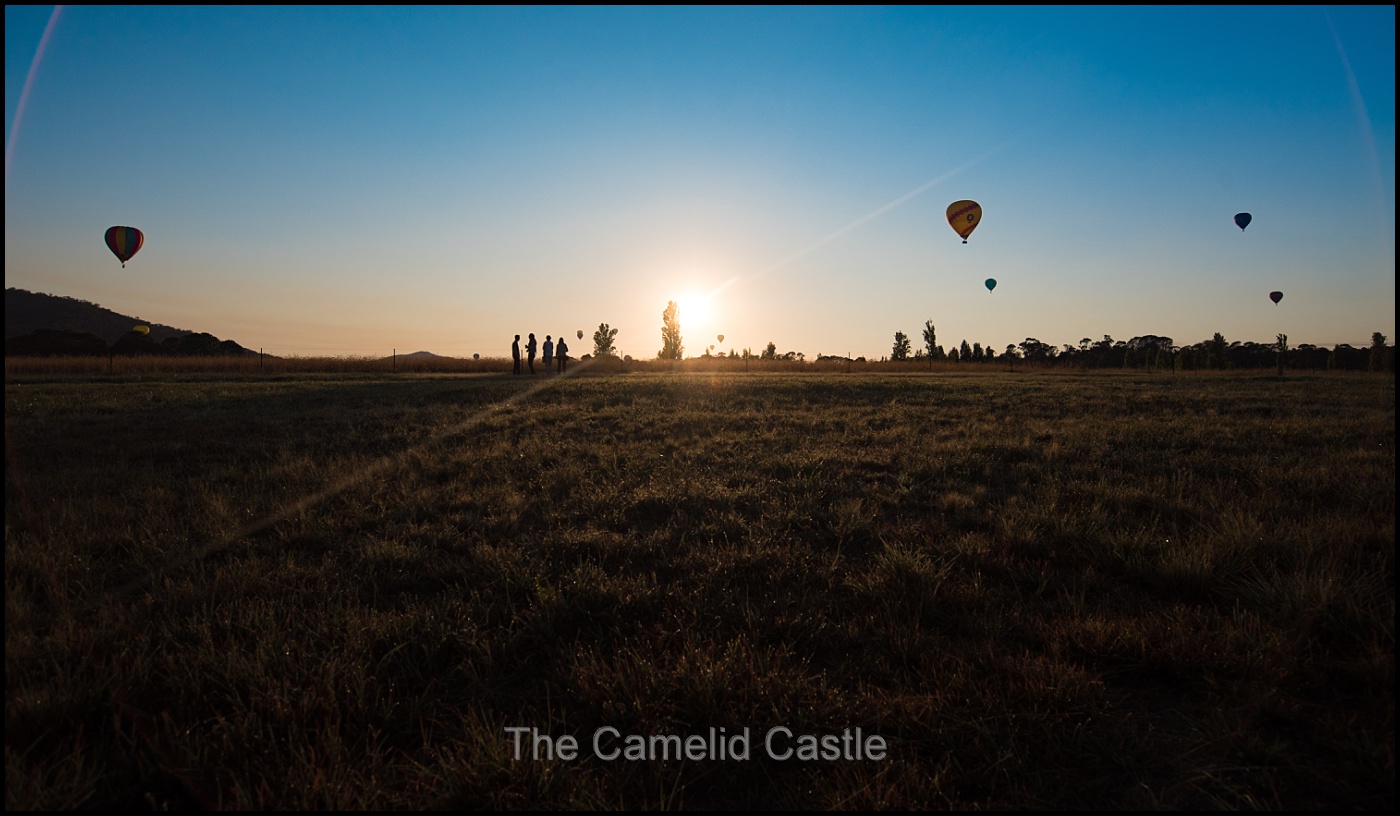 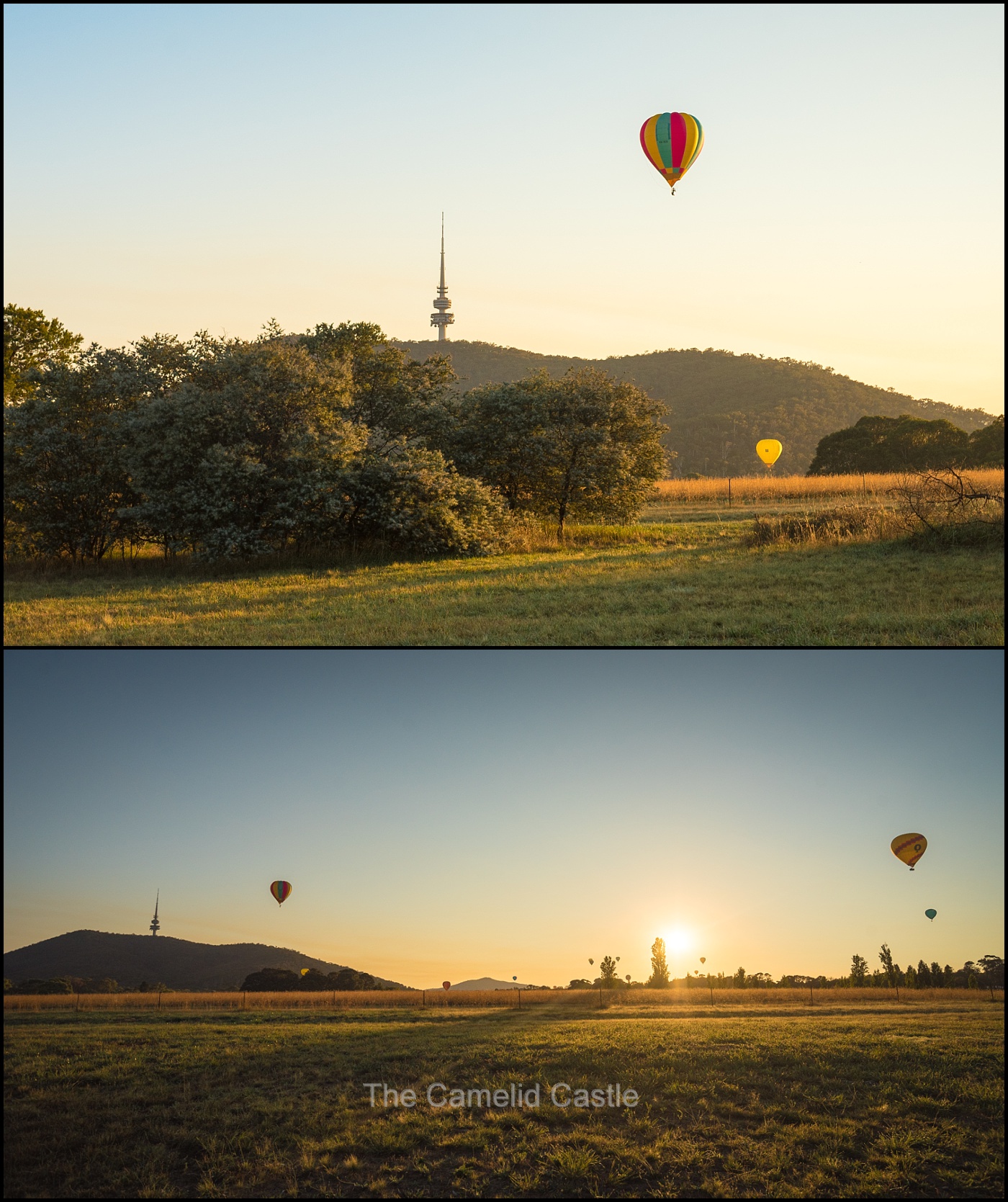 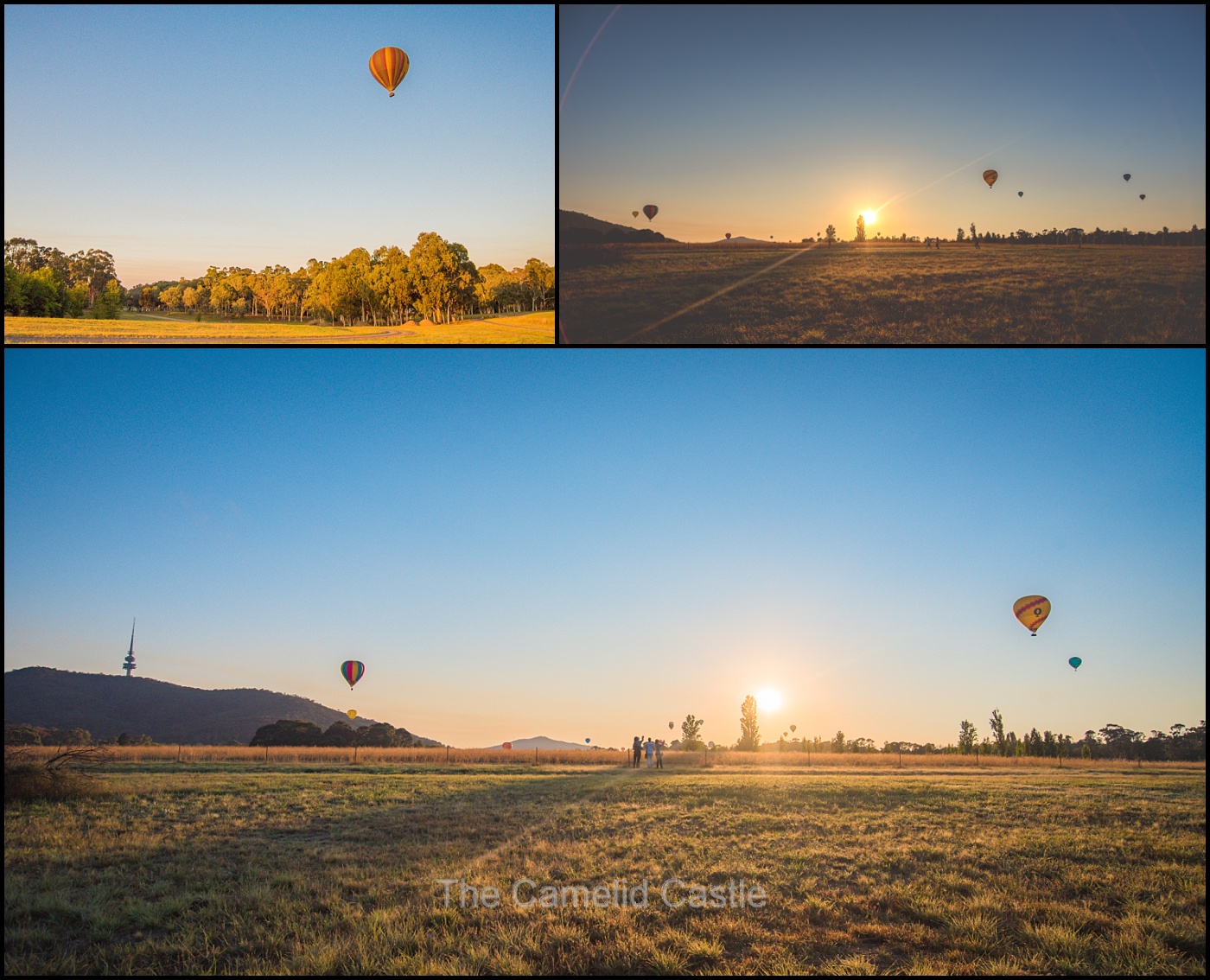 We decided to head up to the nearby Arboretum to get a different vantage point and to see some of the balloons land.  Conveniently, a few were landing in a field behind the arboretum, and we also got to see the balloons drifting over the lake from the viewing platform at the Himalayan Oak Forest. 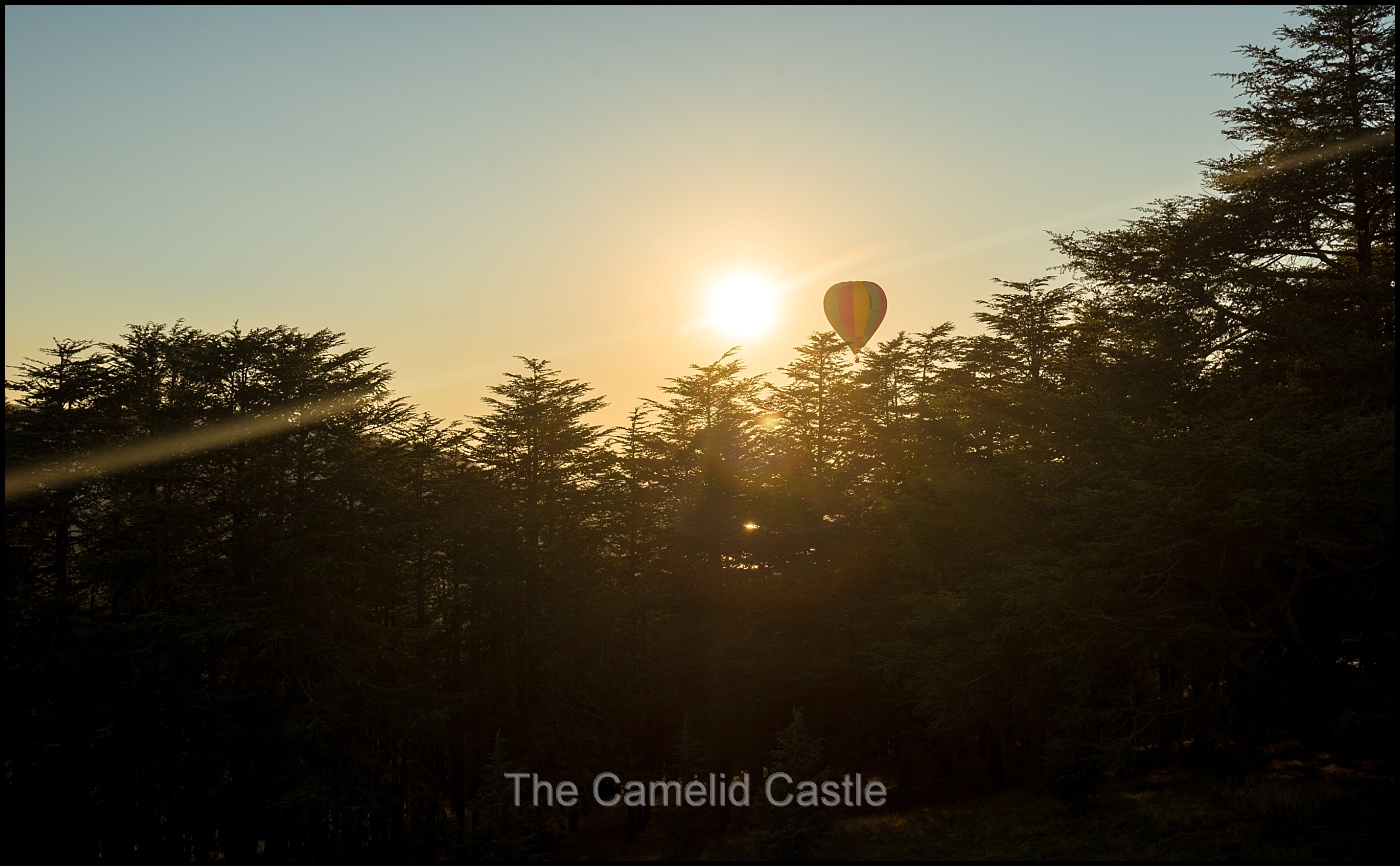 Very slowly a few came in to land, and sometimes take off again if they misjudged the landing!  The kids alternated between watching some landings and seeing the balloons coming in over the lake. 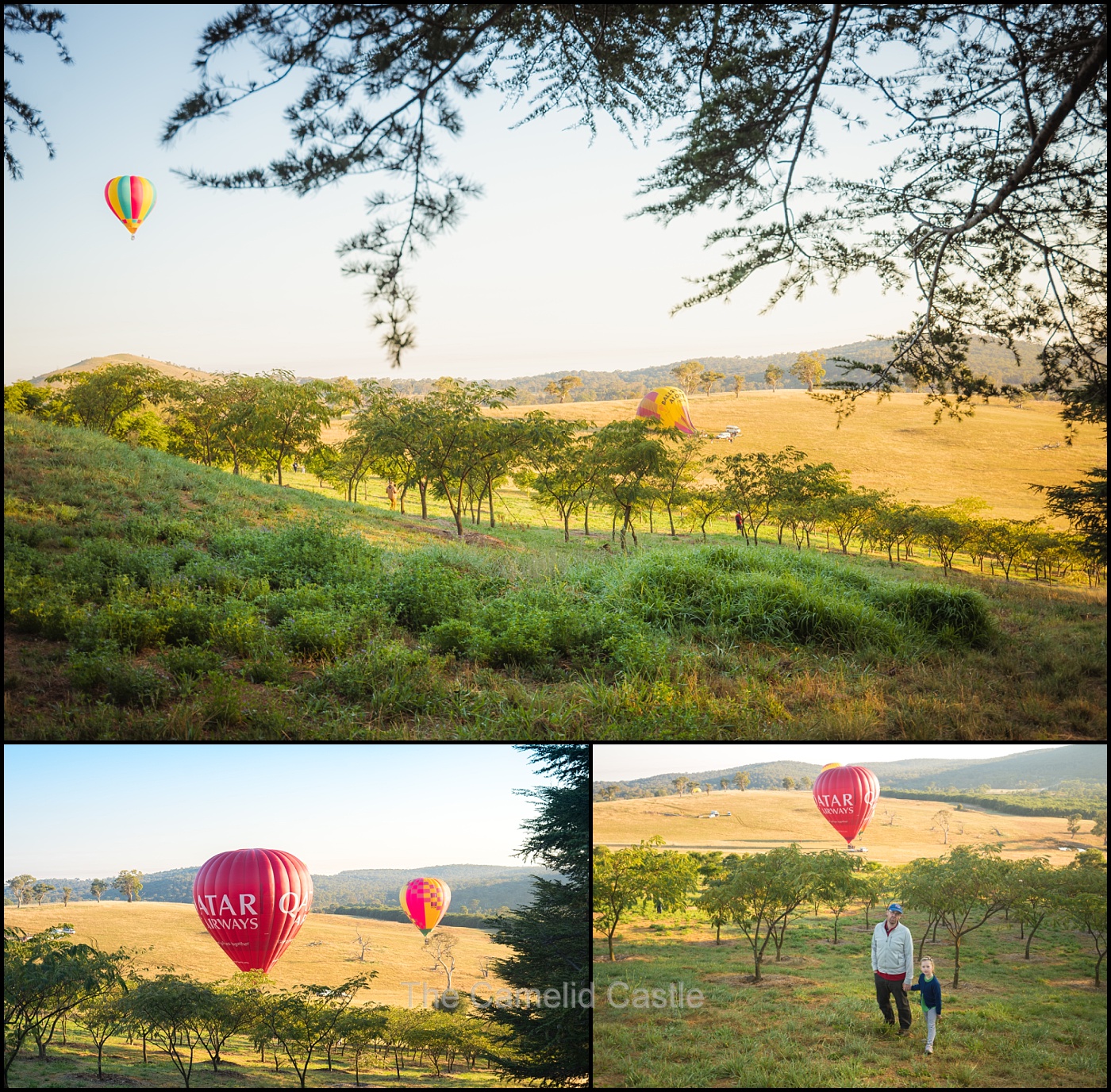 Pretty soon we were all in need of more breakfast (and coffee!) so we gave one last farewell to the balloons and headed home.  The kids declared it the best balloon experience yet, we definitely had picked a good morning for it! 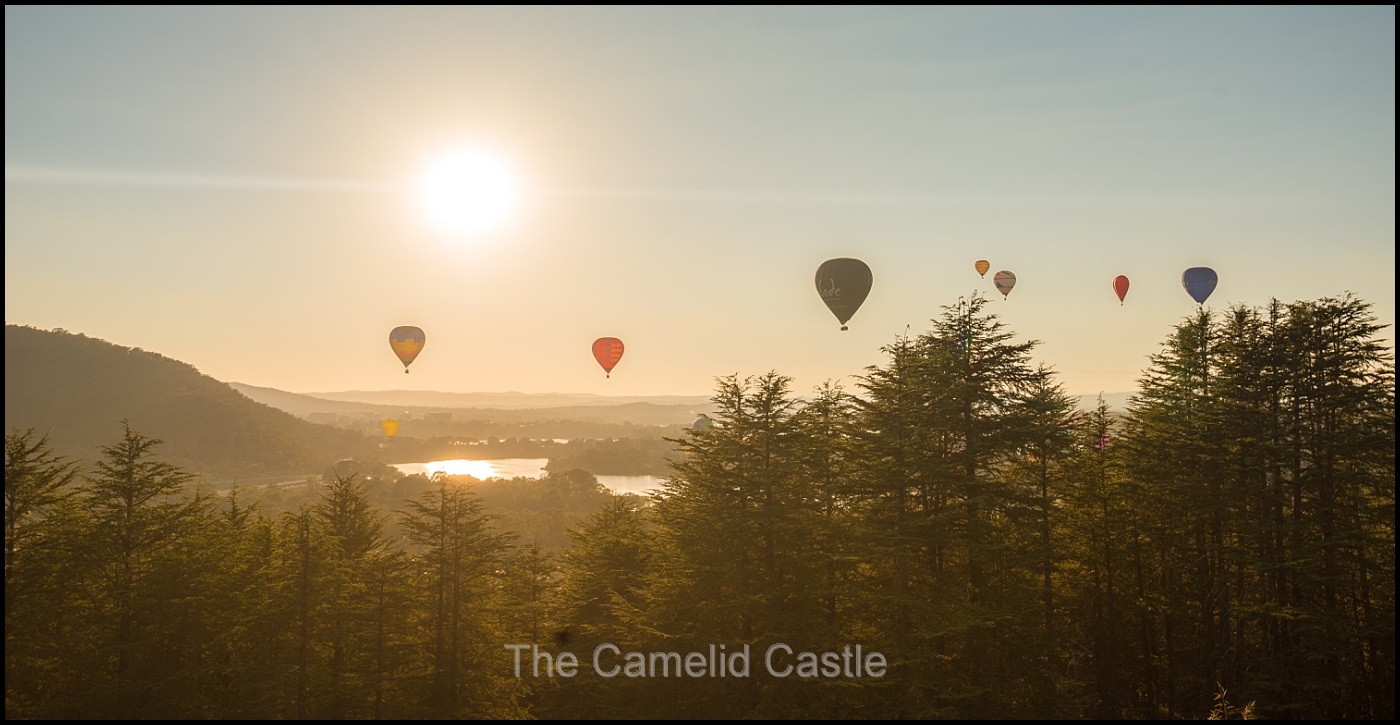 7 thoughts on “The Canberra Balloon Spectacular, 2018!”