If you are going to turn 40, you might as well do it in Paris! In true Parisian style it was a rainy and cold couple of days in Paris, but we managed to celebrate with plenty of food and a little sight-seeing thrown in.

The kids were awake and chatting at 5.15am again (so much for a birthday sleep-in).   Soren decided to jump in my bed, roll around a lot and give me head-lock cuddles as a birthday morning surprise. The kids eventually went back to sleep but I didn’t.

Once Astrid was up, she and Anto went out in the rain to fetch some breakfast pastries, while Soren stayed with me.  When they returned, a bit wet due to the rain, with croissants, pain au chocolat, croissant aux almonds and freshly baked baguette and we had a birthday breakfast feast! 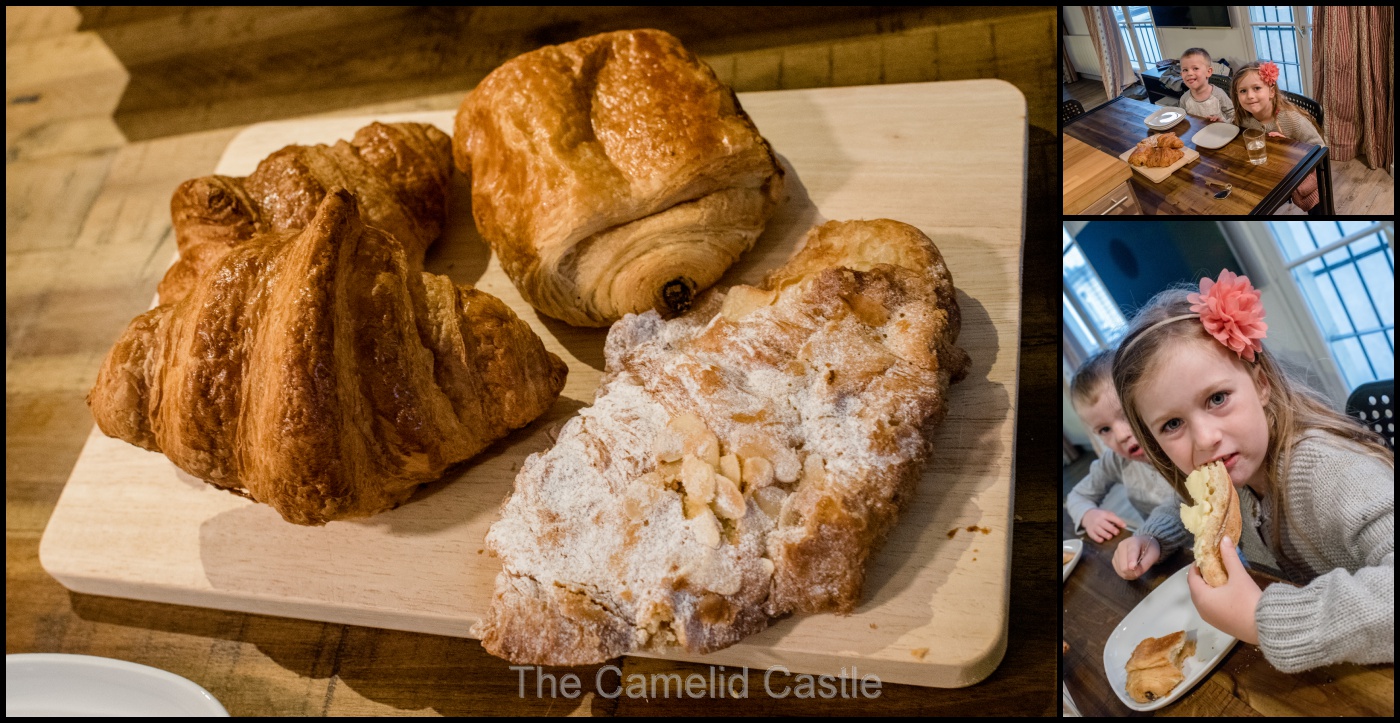 After breaky it was present time and then we decided to brave the rain for a bit of a wander.  We hadn’t done any exploring of the area we are staying in as it was late by the time we got in the day before.  Again we were staying in the second arrondissement, but in a different street, further into the garment district.

It was rather wet and cold out. Despite being only a couple of streets from our usual haunt we discovered an arch near our apartment, the Porte St Denis, one of the sites of gates in Paris’ former city walls.  It took a lot of talking to convince Astrid it was not the Arc de Triomphe . 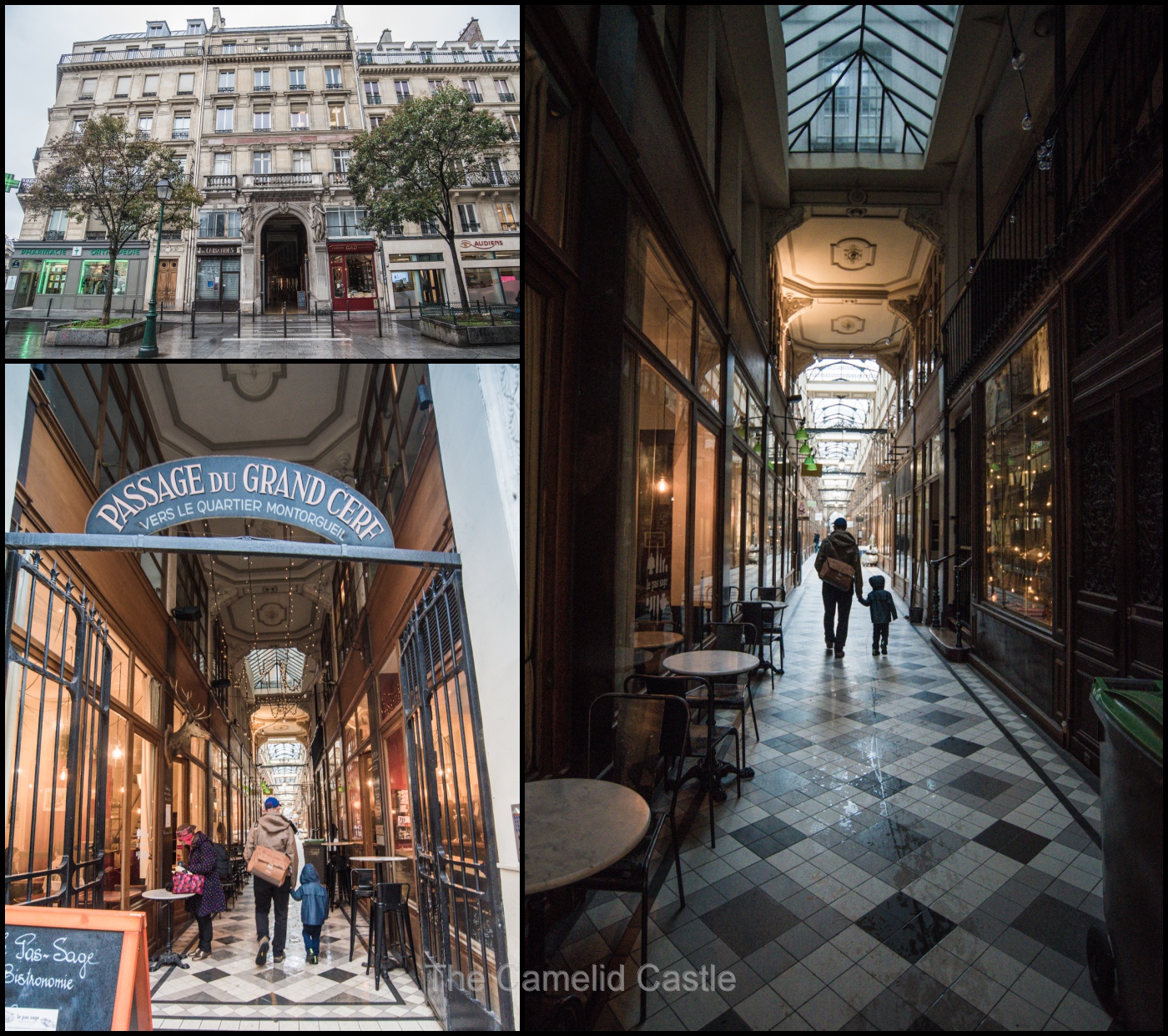 After a wander out of the rain through some new passages we’d just discovered we headed down to Rue Montorgueil and then to the Forum des Halles shopping centre and out of the rain. We had a quick look with a plan to return later for some more shopping.

The kids now cold and wet we walked back to the apartment to take off the wet clothes and get ready for a birthday lunch.  I’d packed some nice outfits for the occasion, but given the freezing weather we had to abandon hope of the girls wearing dresses and stockings and just dressed up a little while not freezing to death! 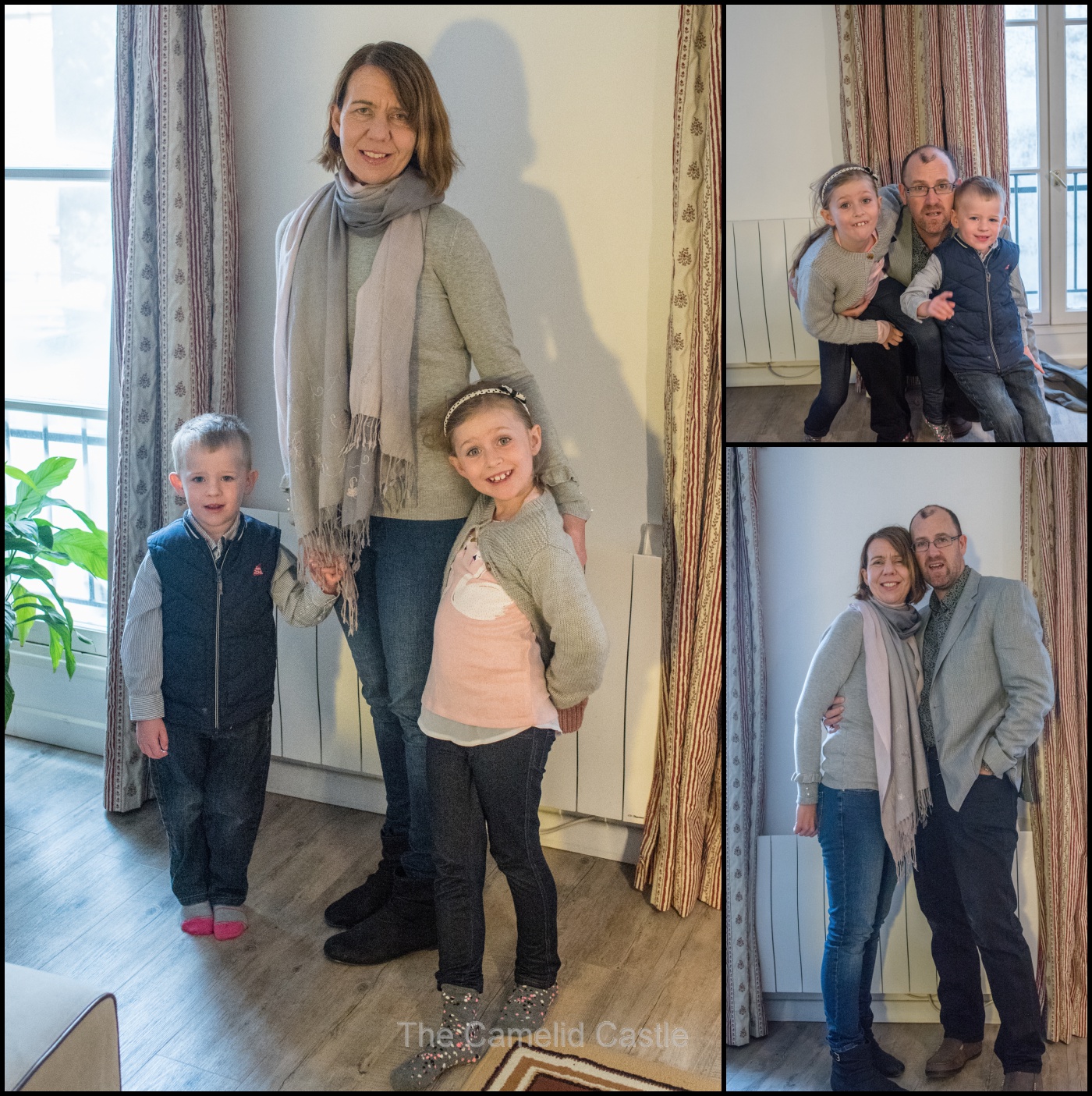 We’d booked a table at Le Souffle for lunch. We walked in the pouring and freezing rain down to the St Denis station and caught the metro line 8 to Madeleine station.  We hadn’t been in this area much before, but subsequently spent a bit of time in the area later in the trip. We found our way to the restaurant, without getting blown over, and were pleased to be inside.

Le Souffle obviously specialises in souffles, and there were plenty to choose from! The kids ordered the menu enfant which was amazing and consisted of a chicken and mushroom hot dish in butter sauce, some vegetables with a mousse, potato straws and a savoury souffle of their choice (from the full menu), followed by a sweet souffle of their choice. For mains Astrid had the cheese souffle and Soren the blue cheese and pear.  Their meals were mighty impressive and tasted delicious………

Anto and I had the lunch special of a green salad and our choice of a savoury souffle, sweet souffle and a glass of wine. I had the spinach and goats cheese souffle for my main, and Anto the pike fish, which came with a sauce. The souffles were enormous!  They were like and fluffy and very good.  Astrid and Soren were in heaven with their meals, Astrid said it was the best meal ever……..

We still somehow had to fit in dessert. For dessert Soren had chosen the chocolate souffle with chocolate sauce and Astrid the caramel. Anto picked the Rothschild – vanilla, candied fruit and kirsch. I had the Grand Marnier souffle for dessert.  Both Anto’s and mine came with the bottles of corresponding liqueur to pour on while they were hot. They leave the bottles and you can add as much as you like. 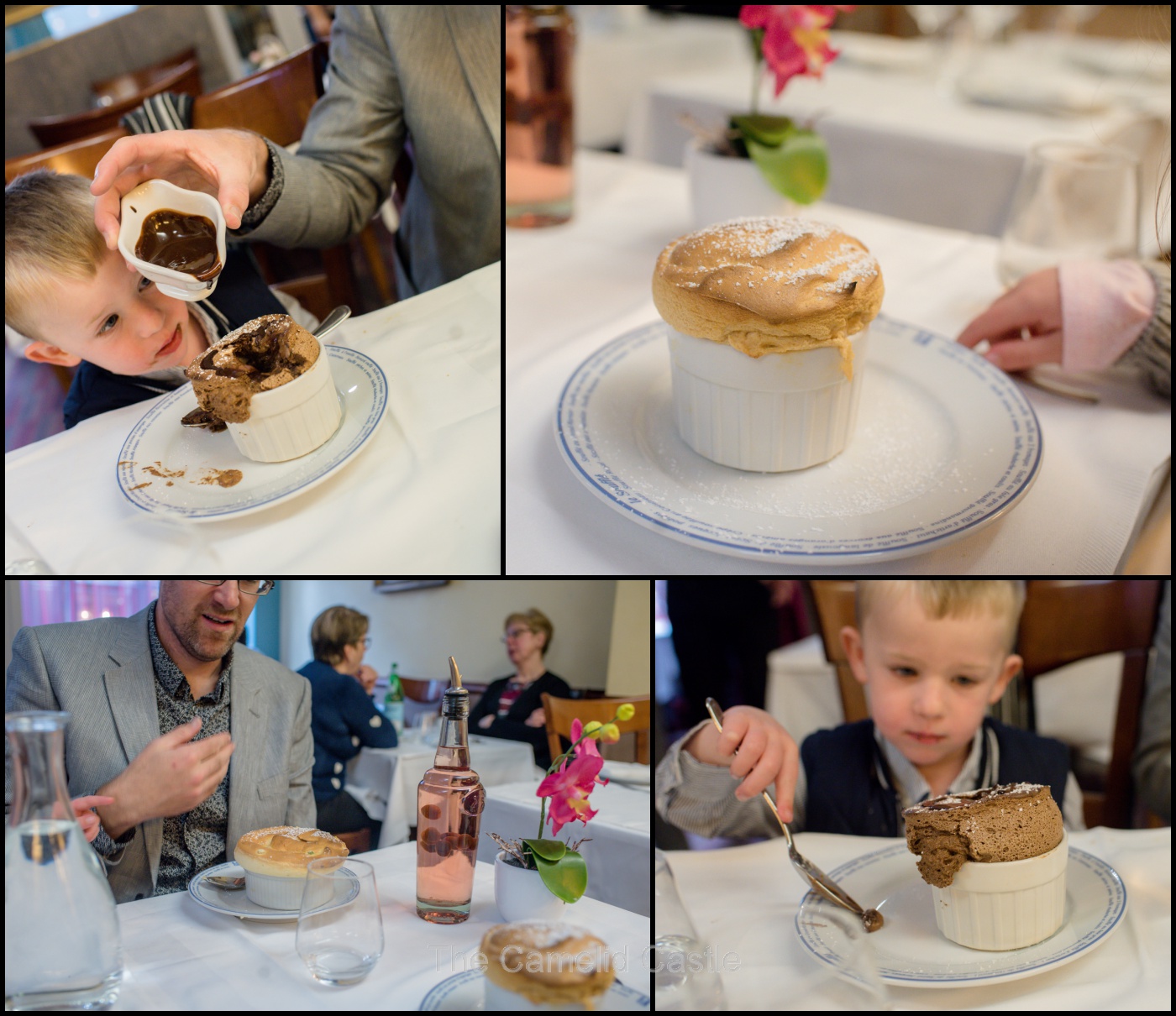 Again the souffles were delicious and light and fluffy. The very full  kids were defeated by their dessert souffles, despite them being really good.

All stuffed, it was back outside.  It was still raining but not as hard.  We got a little lost walking back to metro station so ended up walking all over the place.  We did discover the Madeleine church was right near the station, which we returned to a few days later for an Easter concert. 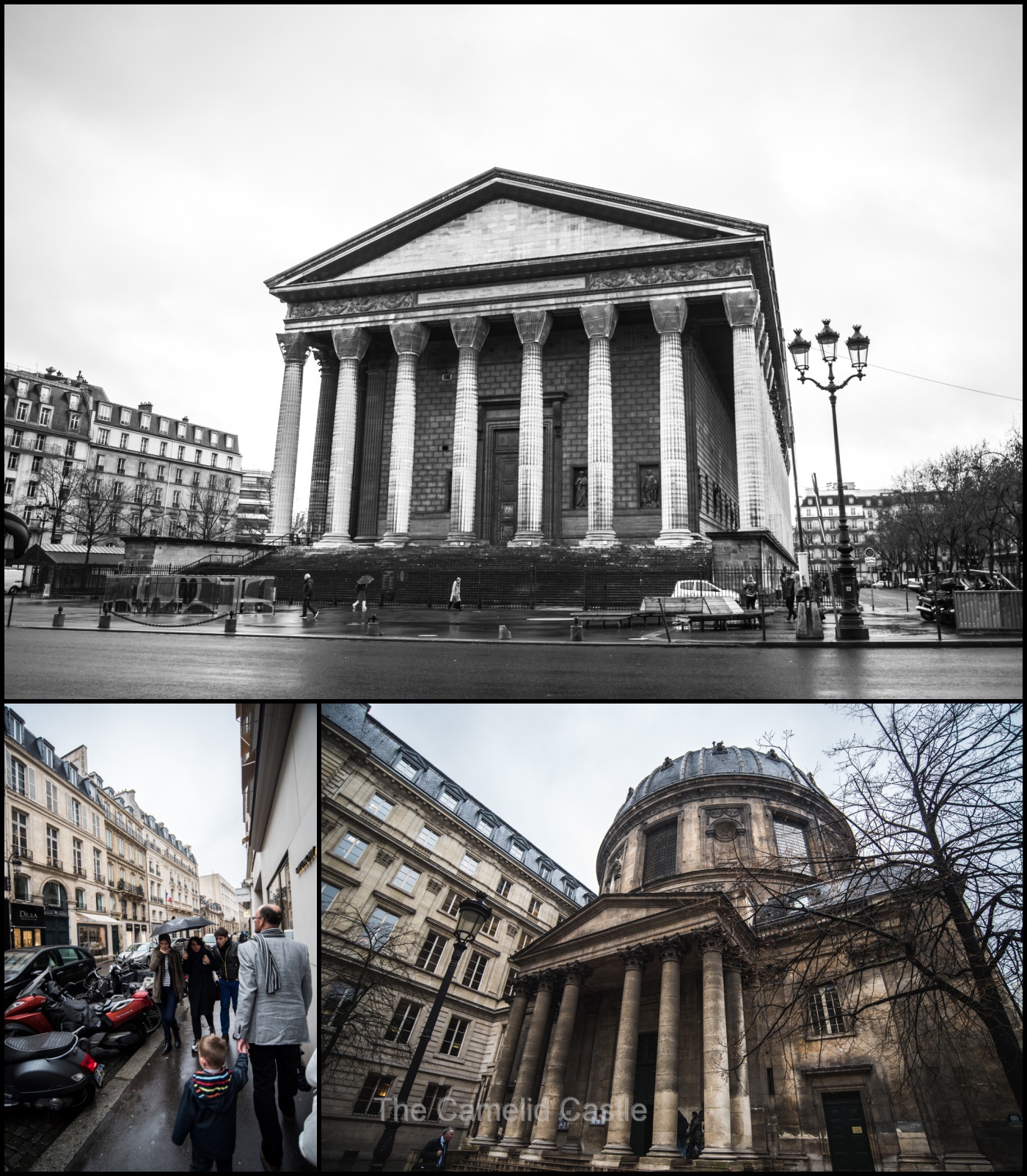 It had stopped raining by the time we eventually found the metro. All tired and cold we decided to forgo museums and sight-seeing for the afternoon and headed back towards the apartment by metro to buy some birthday cake (mmm French patisserie) and groceries.

Anto and the kids also picked me up some birthday tulips and a tart citron, tart noisette and carre framboise for birthday dessert. 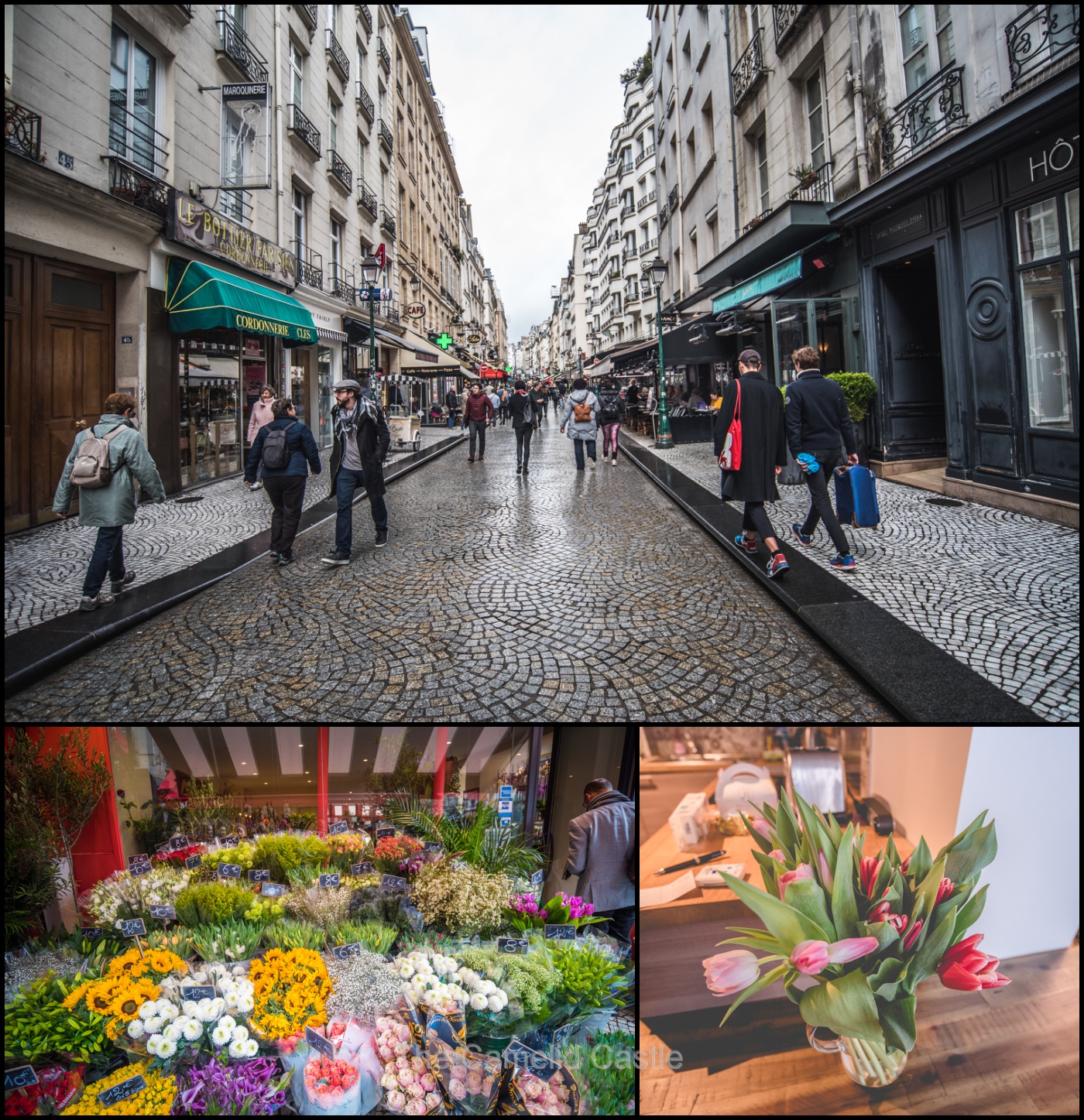 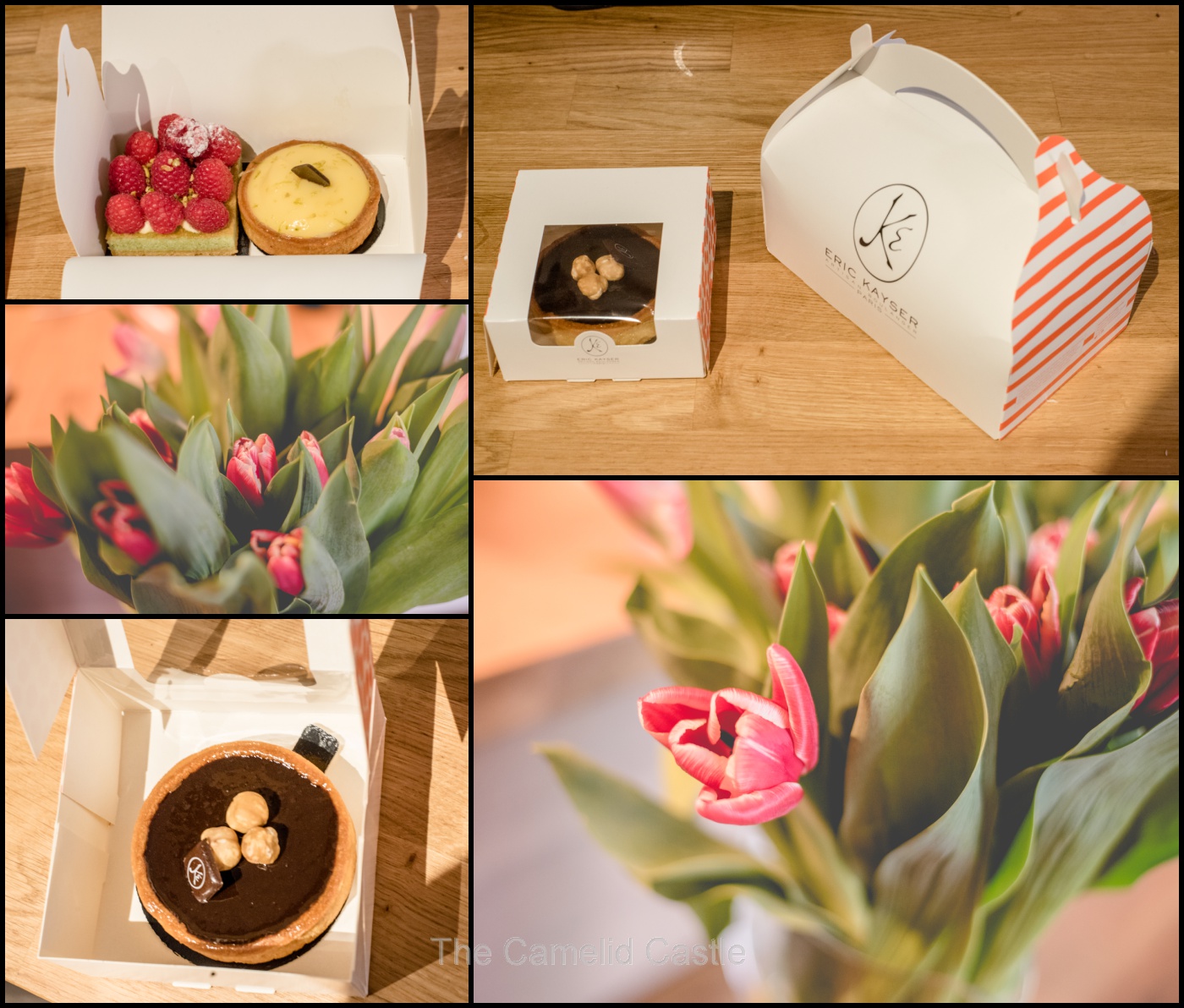 It had finally stopped raining and wasn’t too bad outside but we were all tired and in need of some down time in the apartment.  The kids enjoyed playing for a bit while I unsuccessfully tried to sneak in a birthday nap.

Originally we had thought about going out for dinner but all still full from our ridiculously huge lunch, we had pasta and salad made by Anto, with fresh baguette and French butter.  Then birthday patisserie for dessert……..

We all finally slept in til after 7am, yay!  Soren and Anto went out to find some breakfast pastries from a new patisserie, closer to our apartment, including chocolate brioche, a praline scroll and their signature bread which was delicious.  Then because we clearly hadn’t eaten enough food, we had eggs and mushrooms for breakfast.

Paris being Paris, it was again rainy and cold outside so we had a relaxed start to the day in our apartment which was nice.

Our plan was to go to Musee d’Orsay, which I’ve wanted to revisit since 2012, then do some shopping.  Since it was cold and wet we metro’d down to Musee d’Orsay. Of course we got there and the lines were enormous, snaking the whole way across the courtyard and not moving anywhere in a hurry.  We should have realised on a rainy day everyone would want to go to a museum. We figured that standing in line for 2 hours in the cold rain with kids was not wise, so decided to walk along Seine for a little bit and then catch the metro from Jardin des Tuileries and go and do some shopping in the warm and dry. 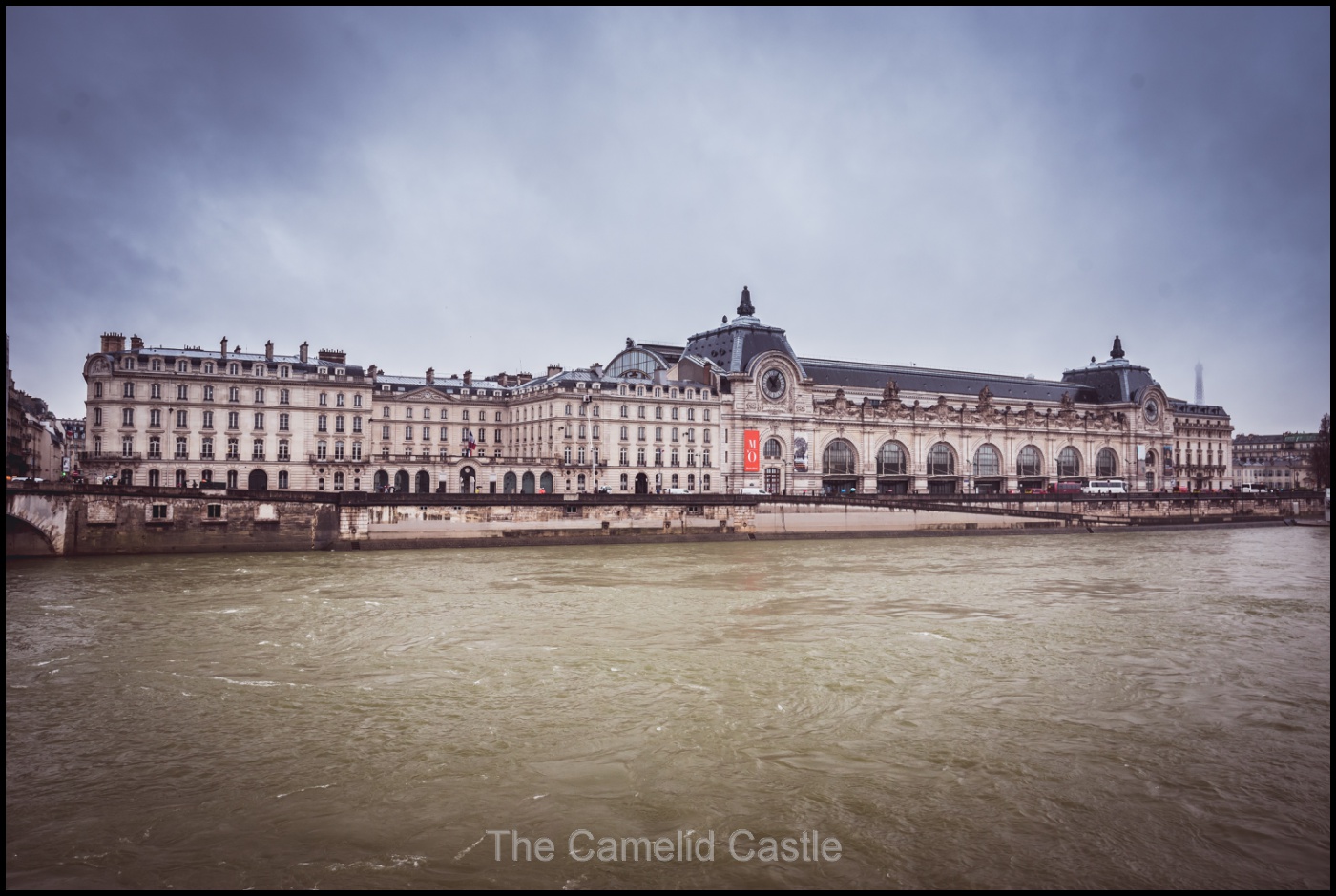 As we were walking along the Seine we saw the funeral procession and guard of honour for the murdered gendarmerie soldier going past ……….explaining why we’d seen so many emergency services vehicles around the area. 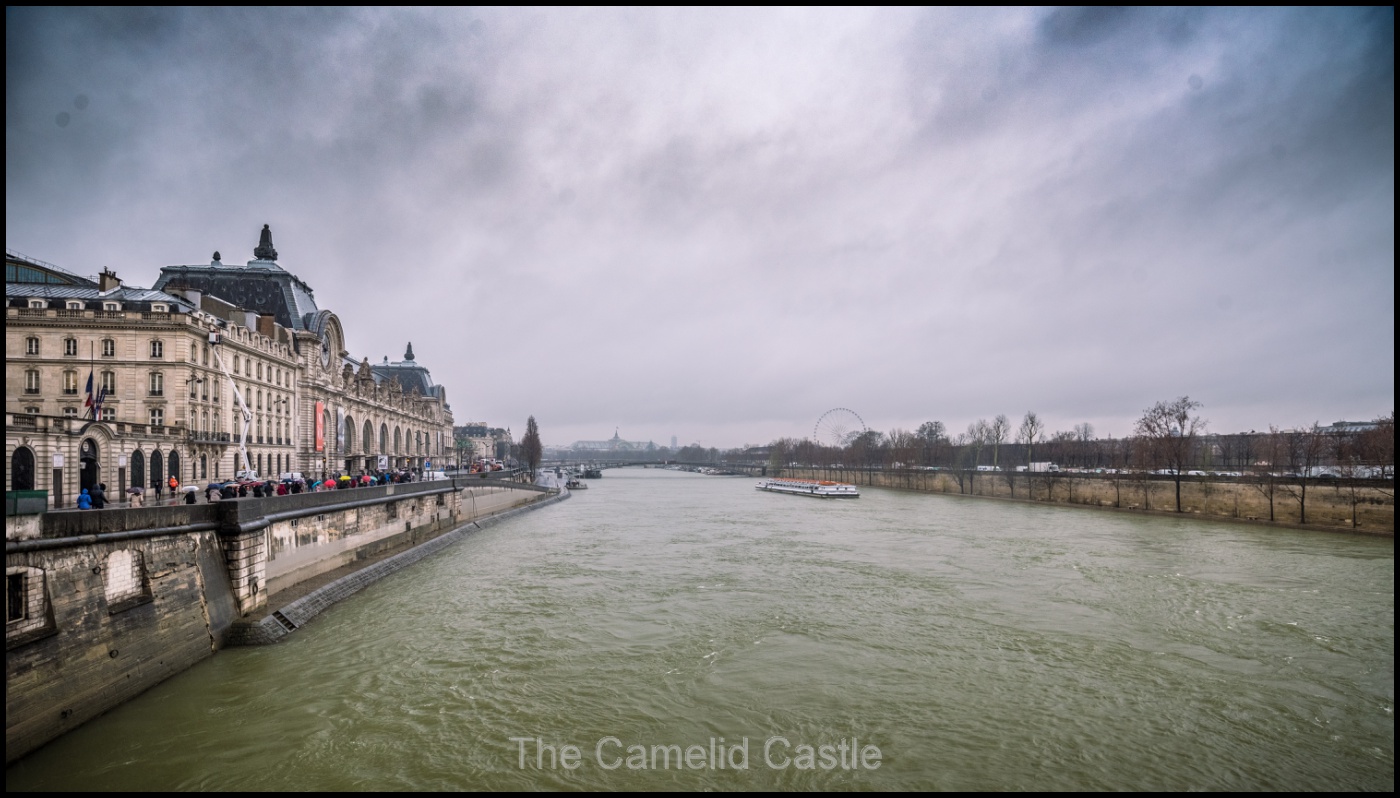 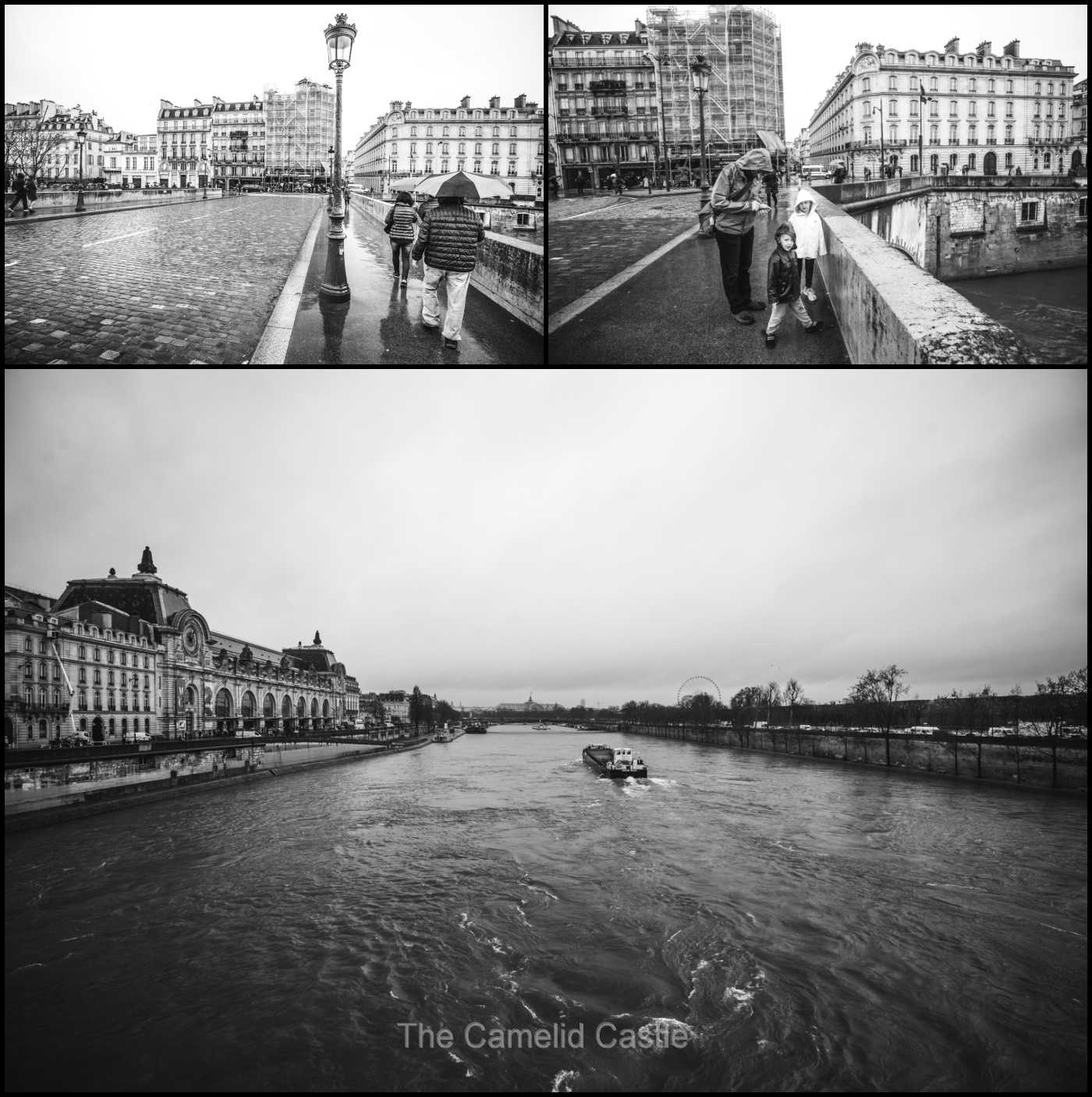 It was still wet and cold so we had a quick walk through a deserted Jardin des Tuileries and caught the metro to BHV (Bazar de l’Hôtel de Ville) in the Marais for some shopping.  We had reasonable success for Soren and Anto and I gained another 7 or 8 pairs of Paris stockings.

The kids were tired so we walked back to apartment through the Marais, it was still wet and cold!

Lunch was more smelly French cheese and baguette and then the kids had a nap while we waited for the weather to improve.

After another storm it had mostly stopped raining so we decided to get some exercise and walk down to Les Halles.  Despite being cold it was almost sunny!  Astrid remembered the giant head from previous visits, always a favourite……….

Into Forum des Halles for more shopping and the kids scored more clothes as did Anto.  Lucky we know which shops we like, it made the process much more efficient.

By now it was 6.30pm so we walked back up to Rue Montorgueil in search of some dinner, since it had been at least a couple of hours since we last ate.  Astrid had been desperate to go to her favourite pizza place but they weren’t open for dinner yet, so after another Astrid food related tantrum, we convinced her to try the highly recommended Italian ‘Little Italy’ we’d been meaning to go to during every visit.  It turns out it was great.  We had an awesome antipasti platter, and ordered a ricotta ravioli in butter, sage and almond sauce and a veal marsala to share.  We were sadly way too full to fit in dessert!

The kids were tired by the time we made it back to the apartment at around 8pm, the first week of our holiday almost done! It had finally stopped raining, so we hoped for better weather the next day to enjoy some Paris springtime sightseeing.

Up next – finally some nice Paris weather and a big day of Spring sightseeing with Sacré-Cœur, Montmarte, the Marais, and our favourite falafel!