Finally we were having some nice (almost) Spring weather in Paris! We decided to make the most of it with a visit to Sacré-Coeur then a walk through Montemarte to the Palais-Royal Gardens.  We then lunched in the Marais at our favourite falafel haunt, L’As du Fallafel.

Almost a week into our holiday and we all slept until after 7am (except Anto, who only had himself to blame with his waking up early). The weather forecast for Paris was finally in our favour after several cold and rainy days, so we planned a day of outside activities. First we had a relaxed breakfast. We had left over chocolate brioche and croissant from the previous day (the French wouldn’t be impressed at us not buying fresh but we were being lazy and they were still pretty good) and Anto whipped up some scrambled eggs on baguette.

Astrid was obviously still tired and had a morning of tantrums but we eventually made it out by 9.30am. It was only 3 degrees but felt warmer with the sunshine and little wind. Maybe we are just getting used to it?

Our first stop was Sacré-Coeur Basilica in Montmarte, since we hadn’t visited since our 2012 trip to Paris. Like most things in Paris, it was walkable from our apartment but we thought we’d metro up and walk back.  We caught the metro line 4 up several stops and then just did the 1 km walk up the last bit of hill. Save for Montmarte, Paris is mostly flat but the kids thought the hill wasn’t that impressive and wanted a bigger one, obviously they are too used to living in Canberra where we can’t go to the end of our street without a decent hill! 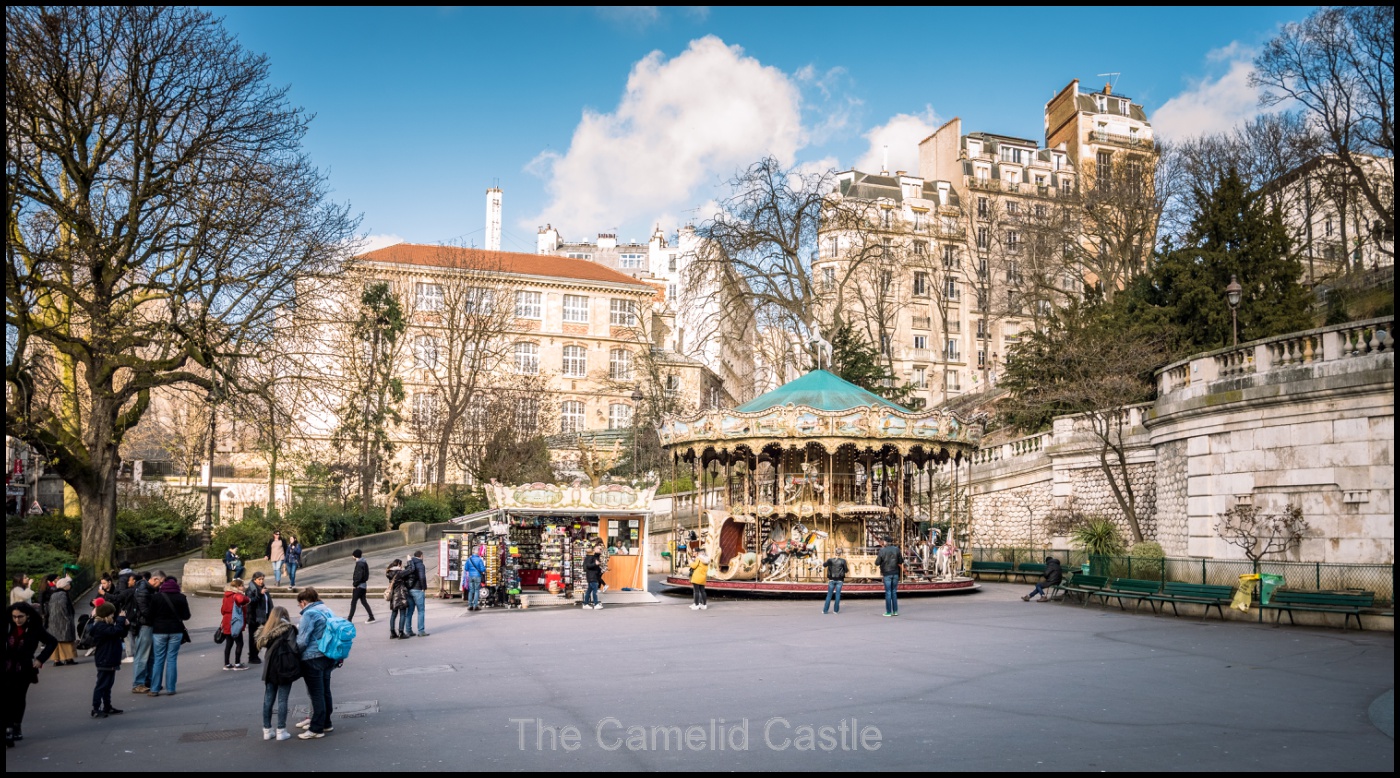 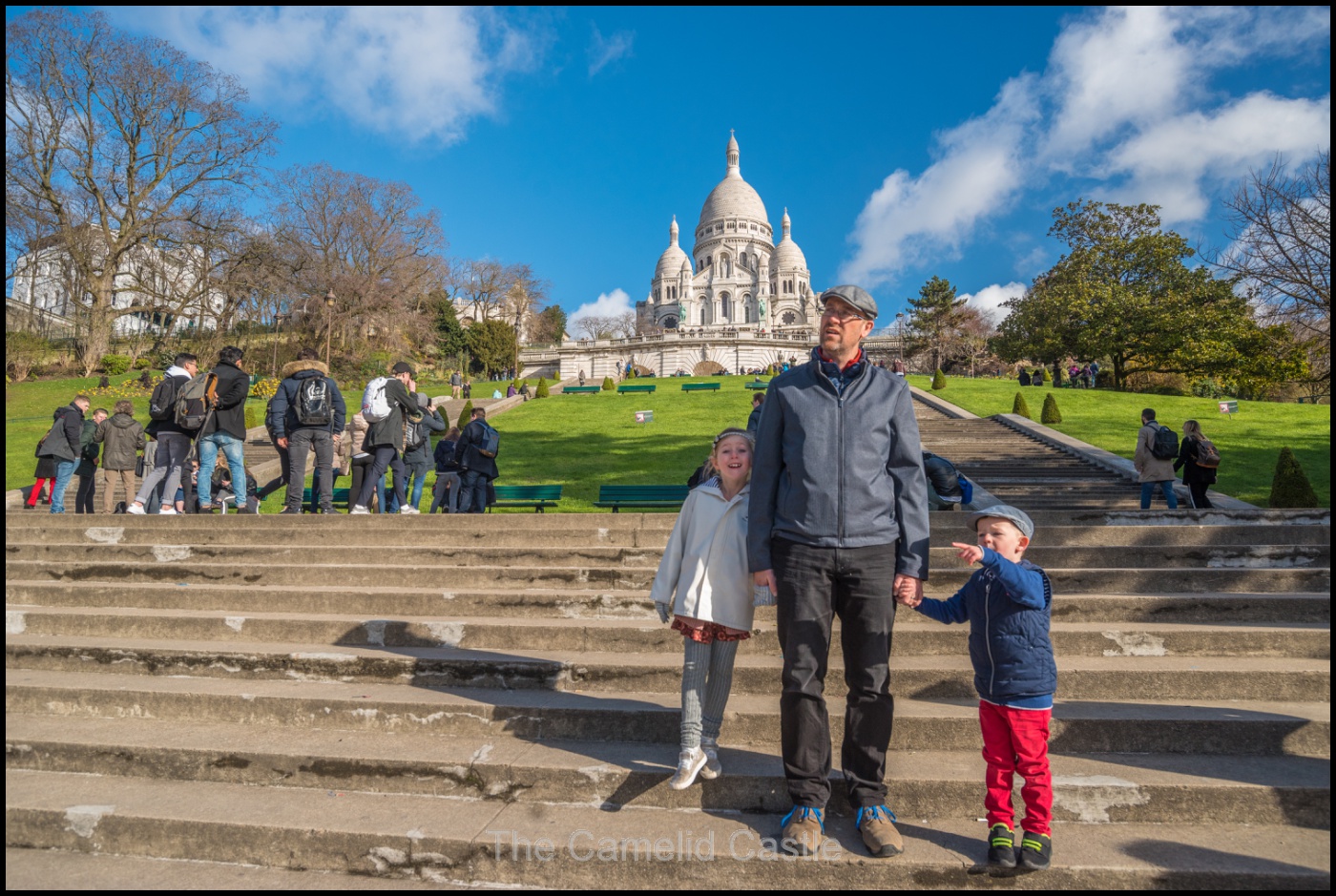 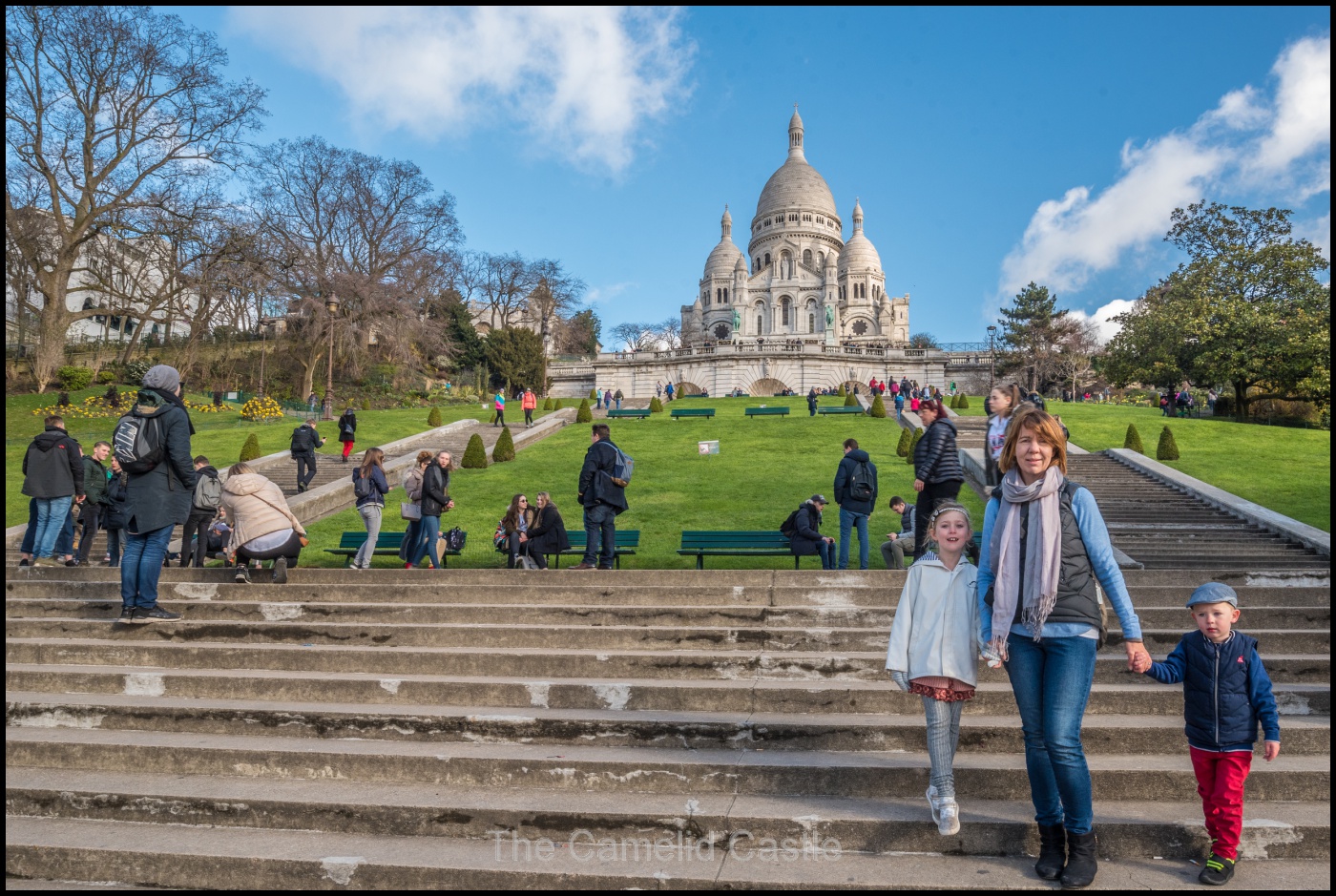 Despite the early hour (for Paris, not kids) it was already busy due to the sunshine.   We had a lovely walk up the steps towards the Basilica and it was nice seeing flowers out in the gardens.  The kids bounded up the stairs, complaining it was hardly even a workout (a fact I had to remind Astrid of later in the trip in Iceland as she was trudging up hundreds of steps near waterfalls). 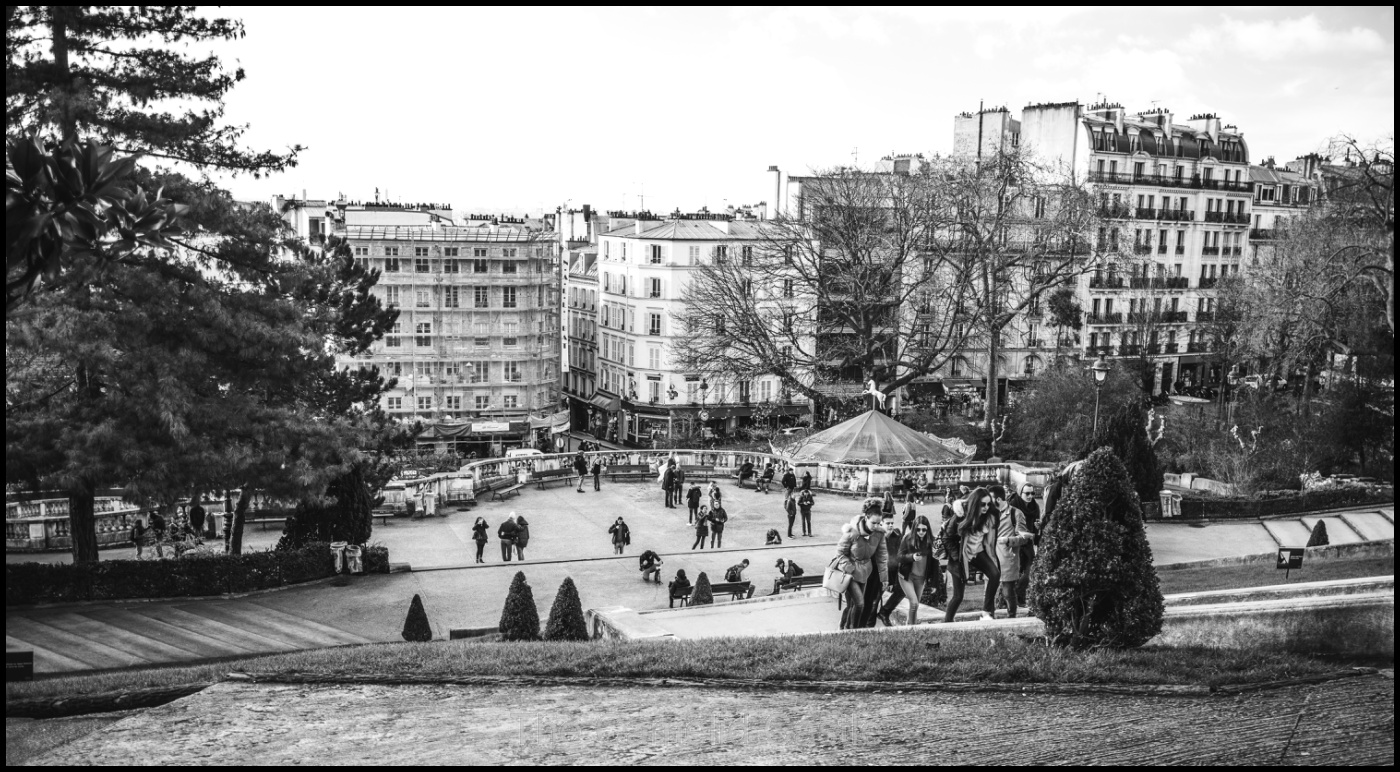 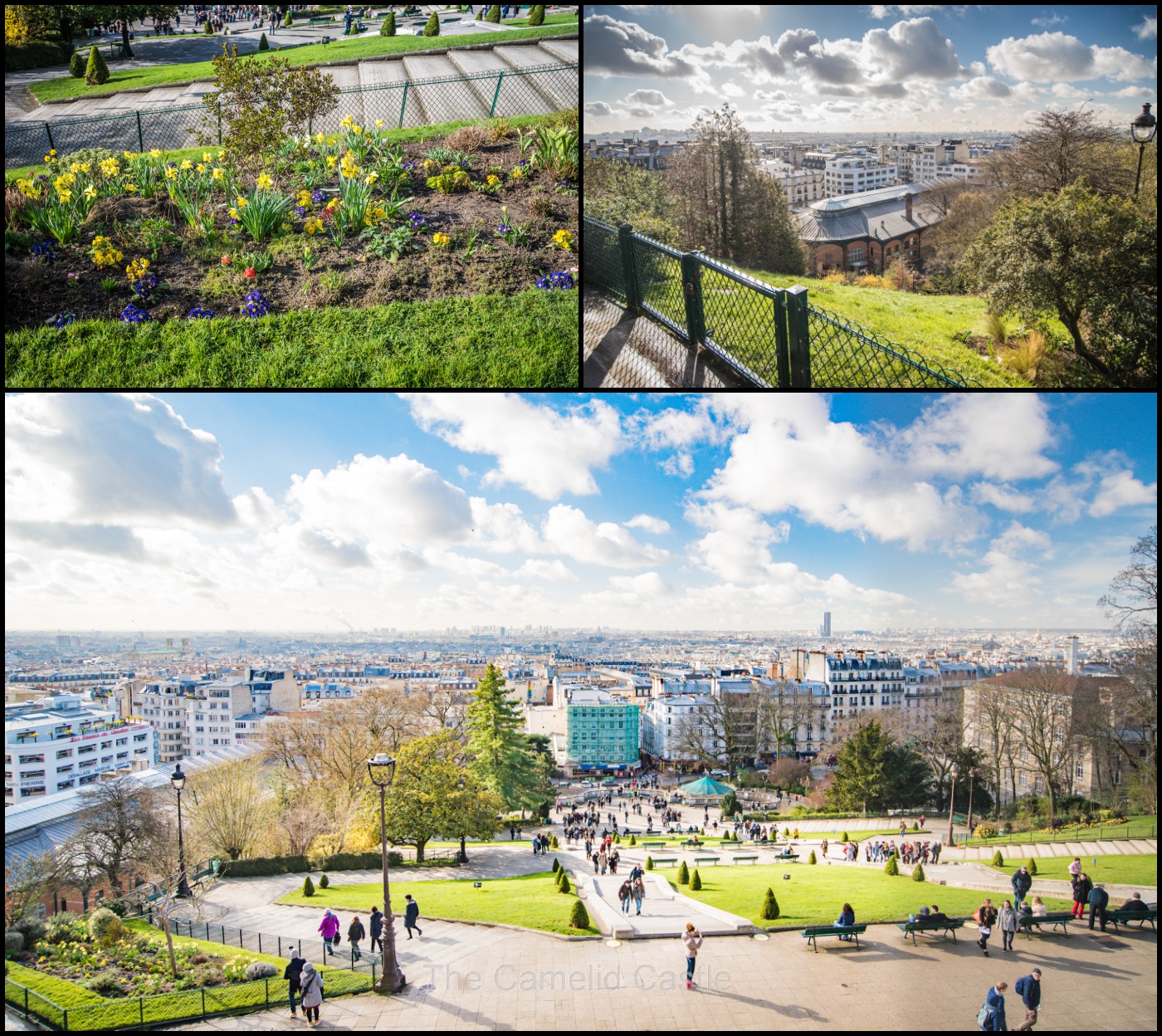 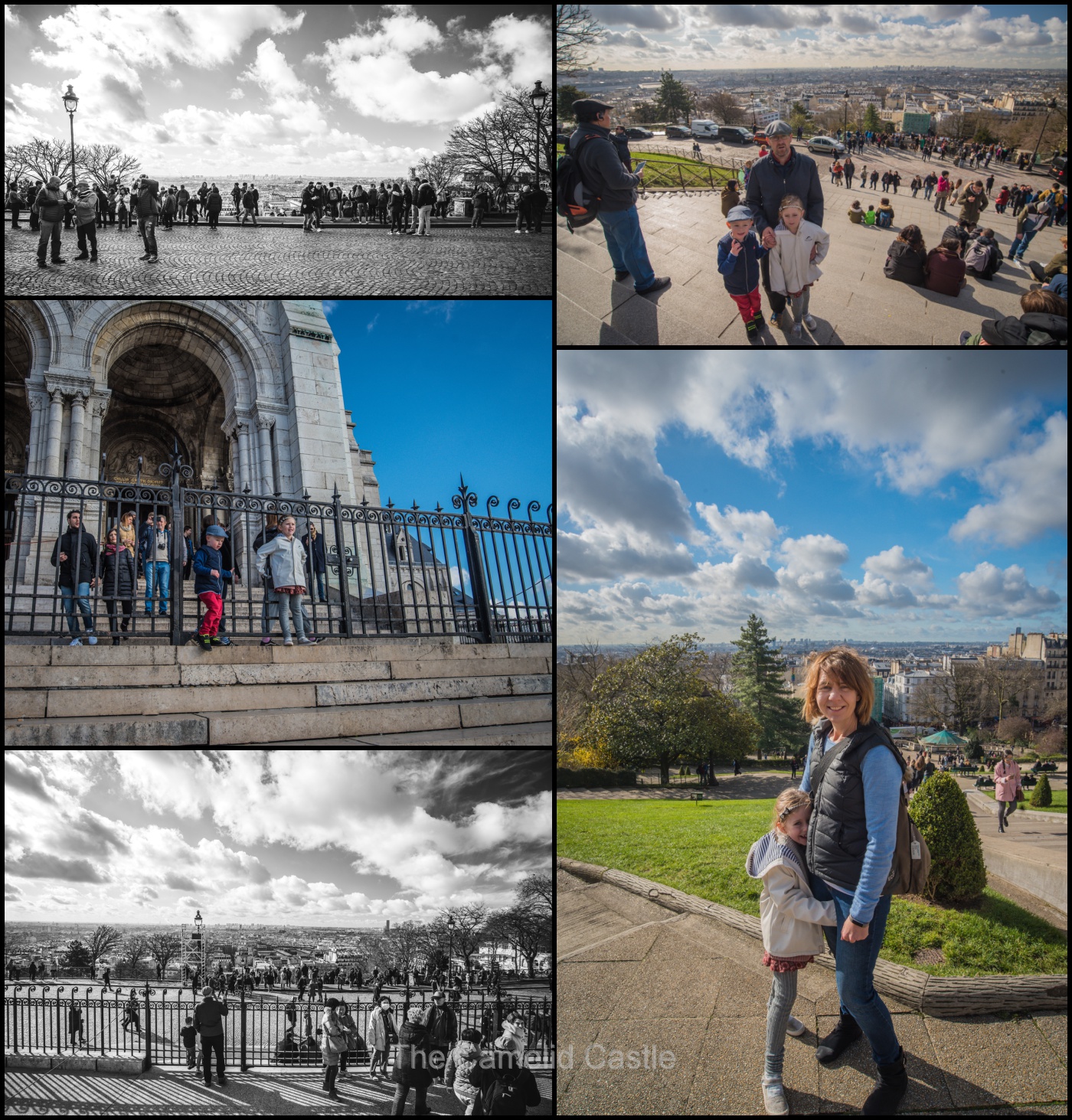 At the top we admired the view and went inside the Basilica.  You aren’t supposed to take photos inside.  I’ve noticed since our last visit in 2012 that this rule is now largely ignored and most people were taking photos on both phones and cameras, but I decided to keep my camera in my bag as per the request.  While Sacré-Coeur is not as impressive on the inside as other churches we have visited in Europe, the ceiling art is beautiful.  During our visit there was a group of nuns were singing hymns which was quite spectacular.

Back outside for a final look at the views across Paris and we decided that despite it being cold outside still, it was a nice enough day to wander on foot down towards the Seine to find Jardin Palais Royal.

It was about a 3km walk, but the first section is downhill through Montmarte.  Once you get past the horrid souvenir filled section, Montemarte is quite pretty and there were so many delicious looking pastry shops we had to walk past.  None of us were hungry, and Anto hurried us along if I even thought about stopping to buy something!

Pretty soon we were down near Palais Garnier.  There was quite a lot of road work in the area, which meant a few detours, making for a longer walk.  Eventually we found Jardin Palais Royal, the 20,000 square metre garden built in the middle of the Palais Royal building.  Of course by then Soren was busting to go to the toilet and hadn’t bothered to mention this as we had walked past any of the numerous public toilets or Mc Donalds that we’d passed in the last half an hour. Anto decided to go find one with him, which turned out to be a difficult task as there were none near the garden. Astrid and I assumed they would be back imminently and enjoyed the sunshine and magnolias, lazing by the fountains……… 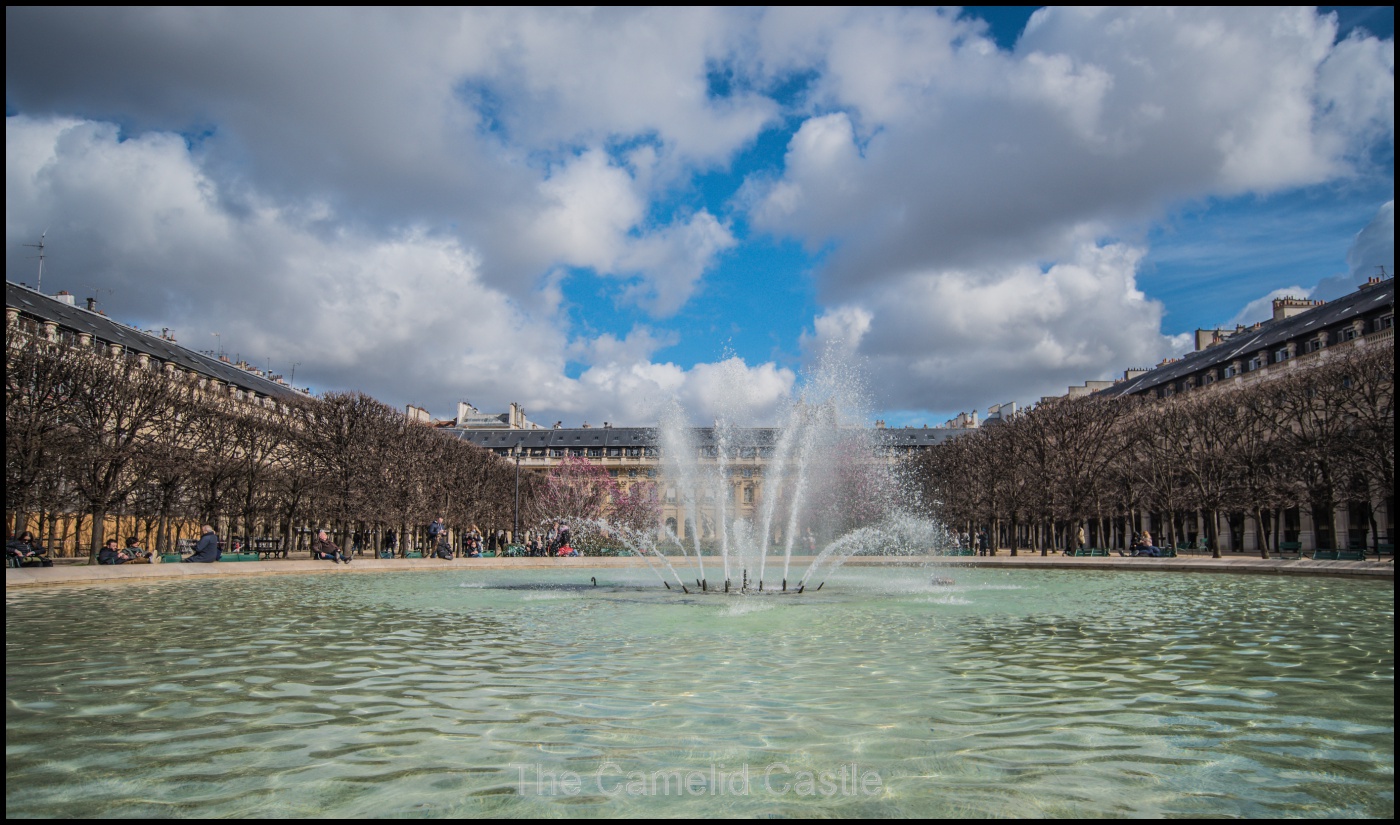 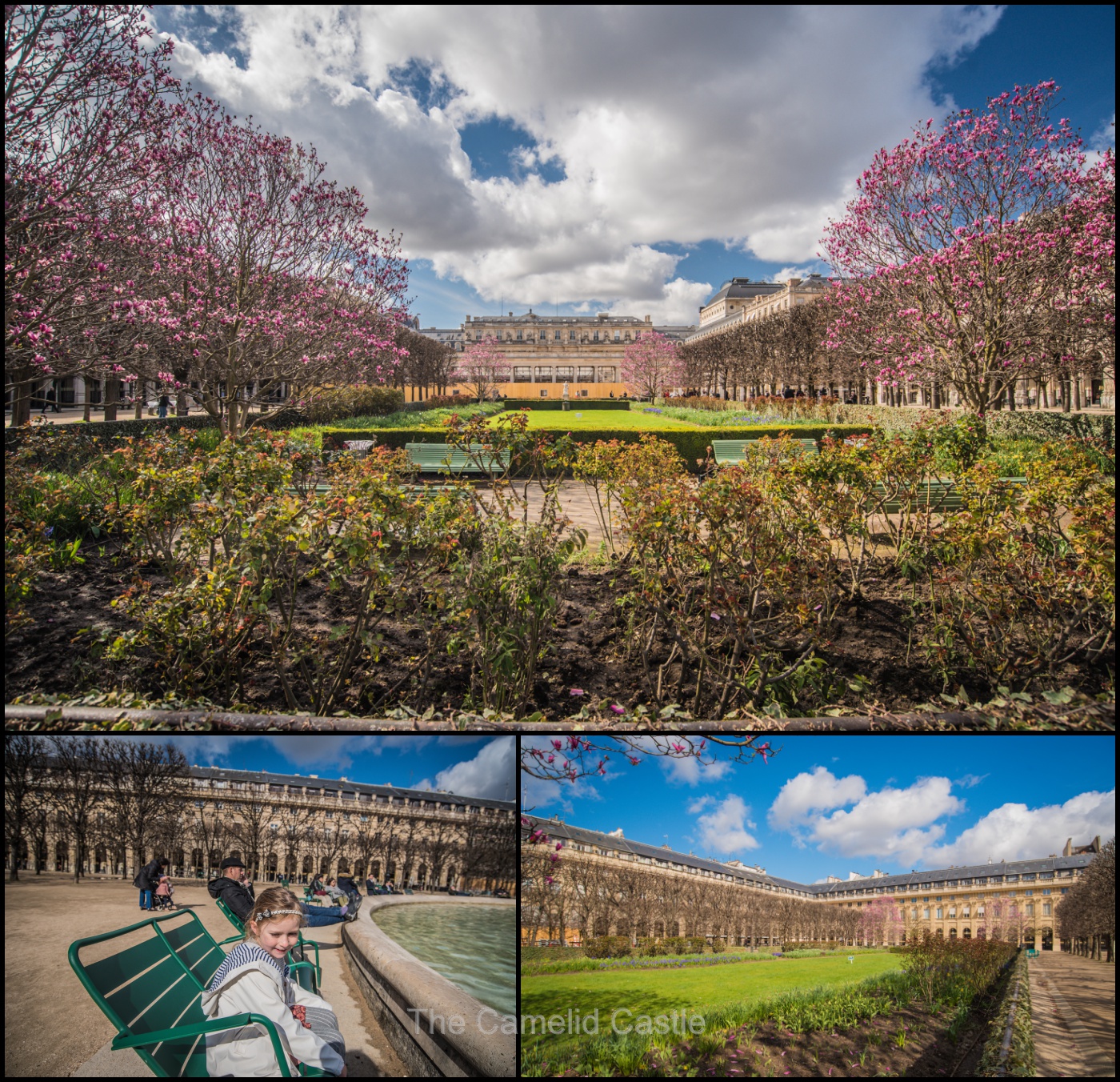 Don’t let the sunny photos fool you, it was still rather brisk and the spray off the fountains wasn’t warm if the breeze came up, but it was very Spring like for Paris!

After over 20 minutes the boys still hadn’t returned. About half an hour after they departed Anto rang and said they’d ended up down at Jardin des Tuileries, so Astrid and I, having now enjoyed a wander in Palais Royal decided to try to find them in Tuileries.

Unlike the previous days brief rainy walk through Tuileries, there were many more people.  Astrid immediately started running around chasing bubbles.

We then we decided we were cold and it was now lunch time.  We decided to metro down to the Marais (the Jewish quarter) for some falafel at our favourite falafel restaurant. 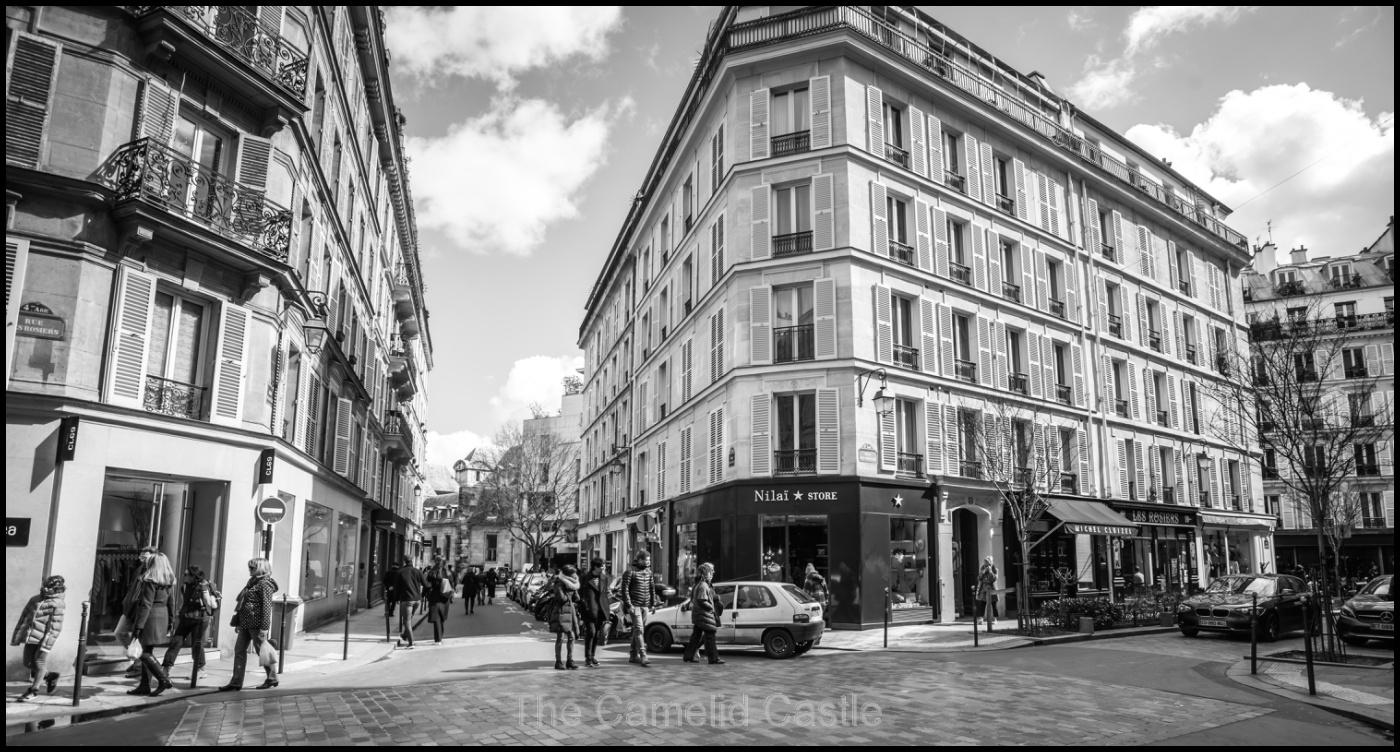 After a quick walk down to the Louvre station we jumped on a metro and pretty soon we were in Marais and headed to our favourite haunt L’As du Fallafel.  We discovered this place at the end of our 2012 trip and had visited a few times since.  During our visit the previous year we ended up going to a competitor across the street as the lines were too long at L’As du Fallafel.

As we approached the restaurant we saw that the line was enormous (it was sunny and around 12.30pm so not surprising).  Anto and I consulted and figured we would again go to the falafel place opposite as we quite enjoyed it last time (we thought it was pretty much as good) and 2 hours waiting for lunch was not worth it.

One of the L’AS du falaffel guys saw Anto with his foot in the competitors door (literally) and waved us over and asked if we wanted a table.  When we asked how long, we were told 5 minutes. Given the line for tables was snaking down the street and the take away line was just as long, we thought this was unlikely, but we were waved inside, queue jumping by over an hour. 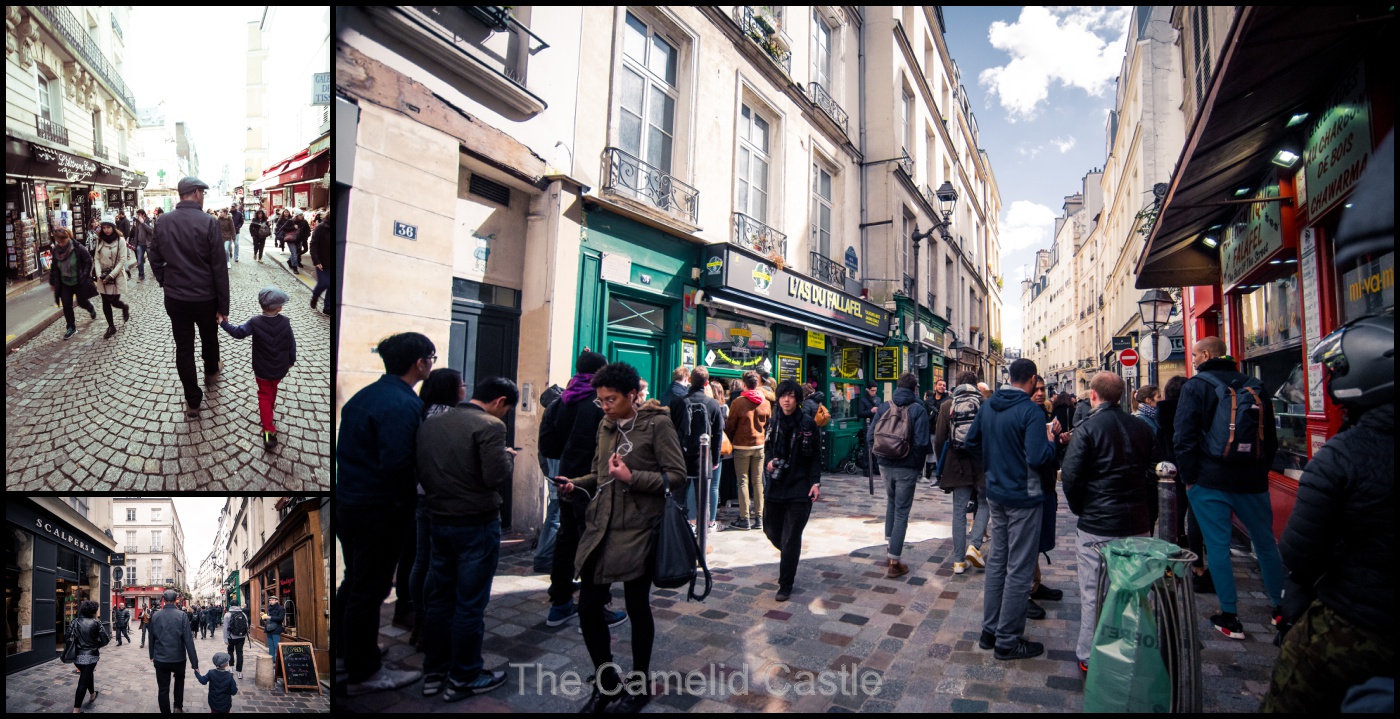 The inside wait was more like 15 minutes, not 5, but obviously our plan to go elsewhere got us bumped. Since our first visit here 5 years ago, and even our last visit 2 years ago, this place has got seriously famous (it’s now recommended by Lenny Kravitz).  The waiters now run around with walkie talkies and it’s a production line.  The tables and packaging have gotten an upgrade but the food is the same and its still no frills, and luckily cheap and very tasty.

The kids and I ordered the vegetarian special, and Anto the schwarma plate.  Again it was delicious, but none of us were sure it’s that much better than the other falafel places in the street.  Astrid and Soren got stuck into their falafels (one split between them, but still enormous) and Astrid devoured all of hers. 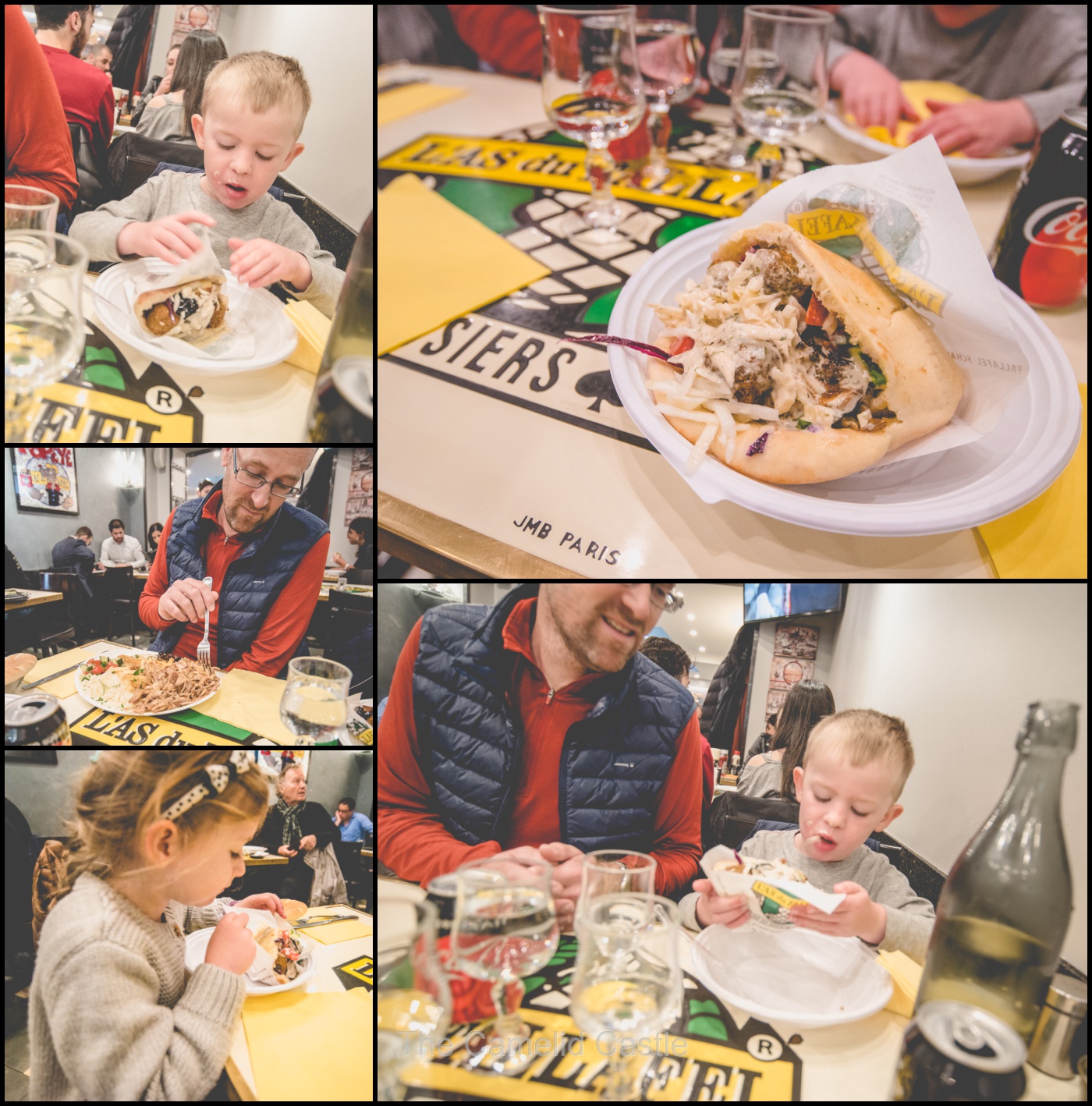 All feeling rather stuffed we walked back through the Marais, again past lots of delicious pastry shops where Anto just groaned and made us keep walking.

Soon we found the street market down in Montorgueil.  If we weren’t already extremely full there were crepe and delicious lunch options by the dozens. Instead we wandered to get some groceries for dinner and a quiche and patisserie item for dessert. It was the first time during this trip that we’d seen sun while walking these streets! 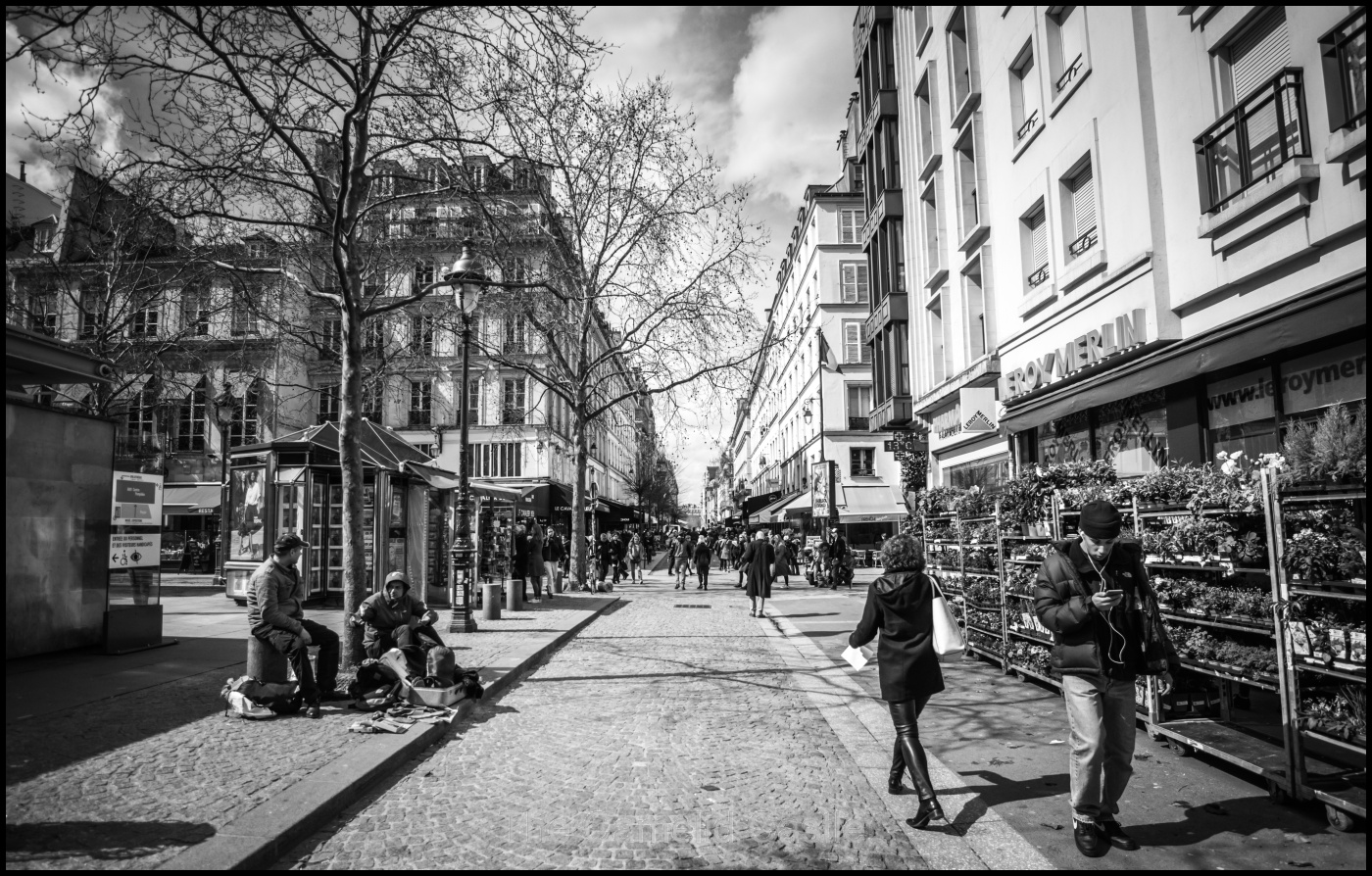 Food purchased and it was back to the apartment. The kids were happy to play for a couple of hours before our dinner of oven pizza, salad,  and capsicum quiche. Followed by dessert of pistache and chocolate flan and speculoos eclair. All very yummy! 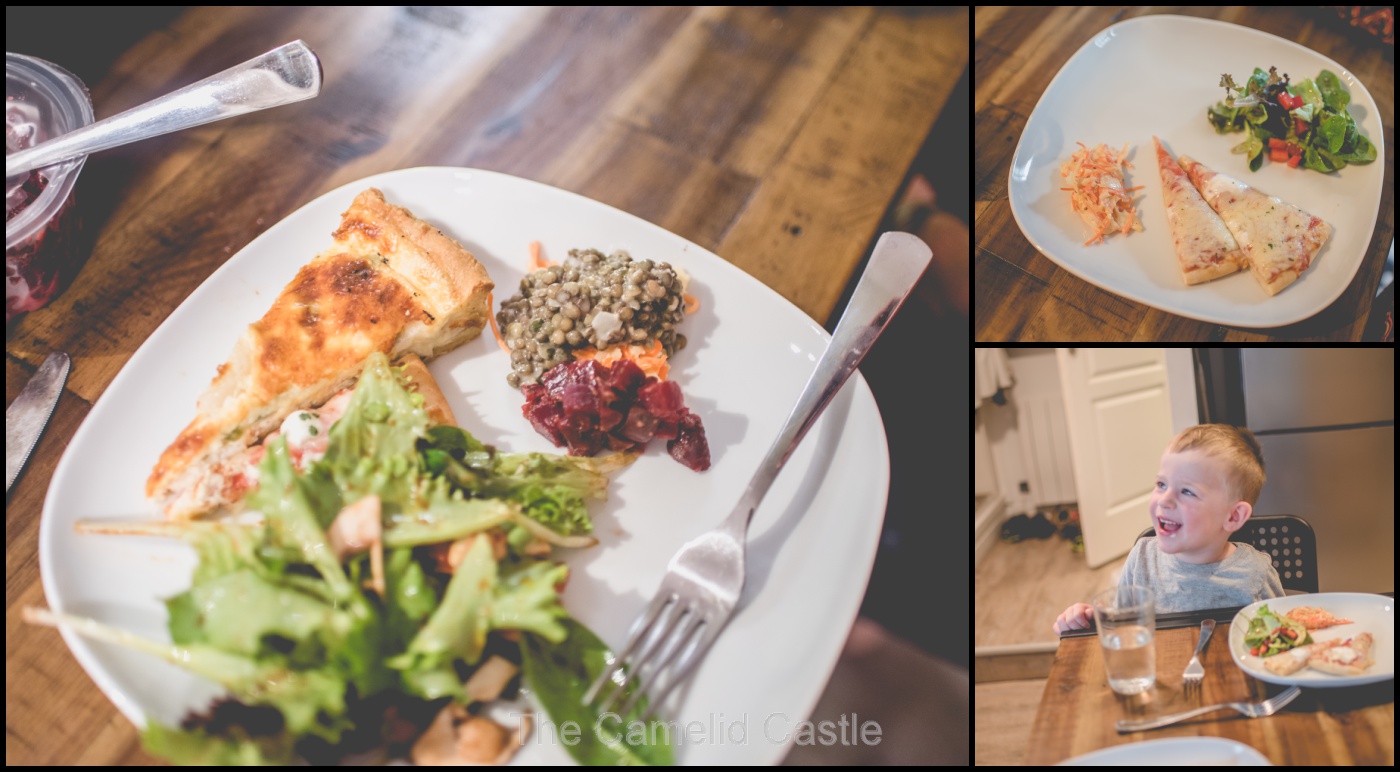 Daily statistics for Thursday the 29th of March, 2018, in Paris, France – the temperature range for the day was 2 to 12 degrees, with a mean temperature of 6 degrees, and mostly sunny! Our best weather day yet…..  The total walking for the day was 13.25km, a nice day of walking in the sunshine.

Up next, another big day of sightseeing in Paris – the Pantheon, Palais Garnier and Galeries Lafayette……. and of course, more food!