We had another big day of sight-seeing in Paris planned. Despite the being our 4th trip to Paris we hadn’t yet made it inside the Panthéon, so today was the day. We also planned to take the kids to see Palais Garnier, the theatre where Anto and I were seeing a ballet later that week.  We did also squeezed in a visit to Jardin du Luxembourg gardens and the Galeries Lafayette shopping centre (always impressive) and managed to score our first crepes of the Paris visit.

It was Friday and now fully time zone adjusted we all slept til close to 7.30am.  The adults inhaled some coffee in the apartment, before we all set out for a walk to pick up freshly baked pastries and bread from the ‘new’ bakery we’d discovered near the apartment. 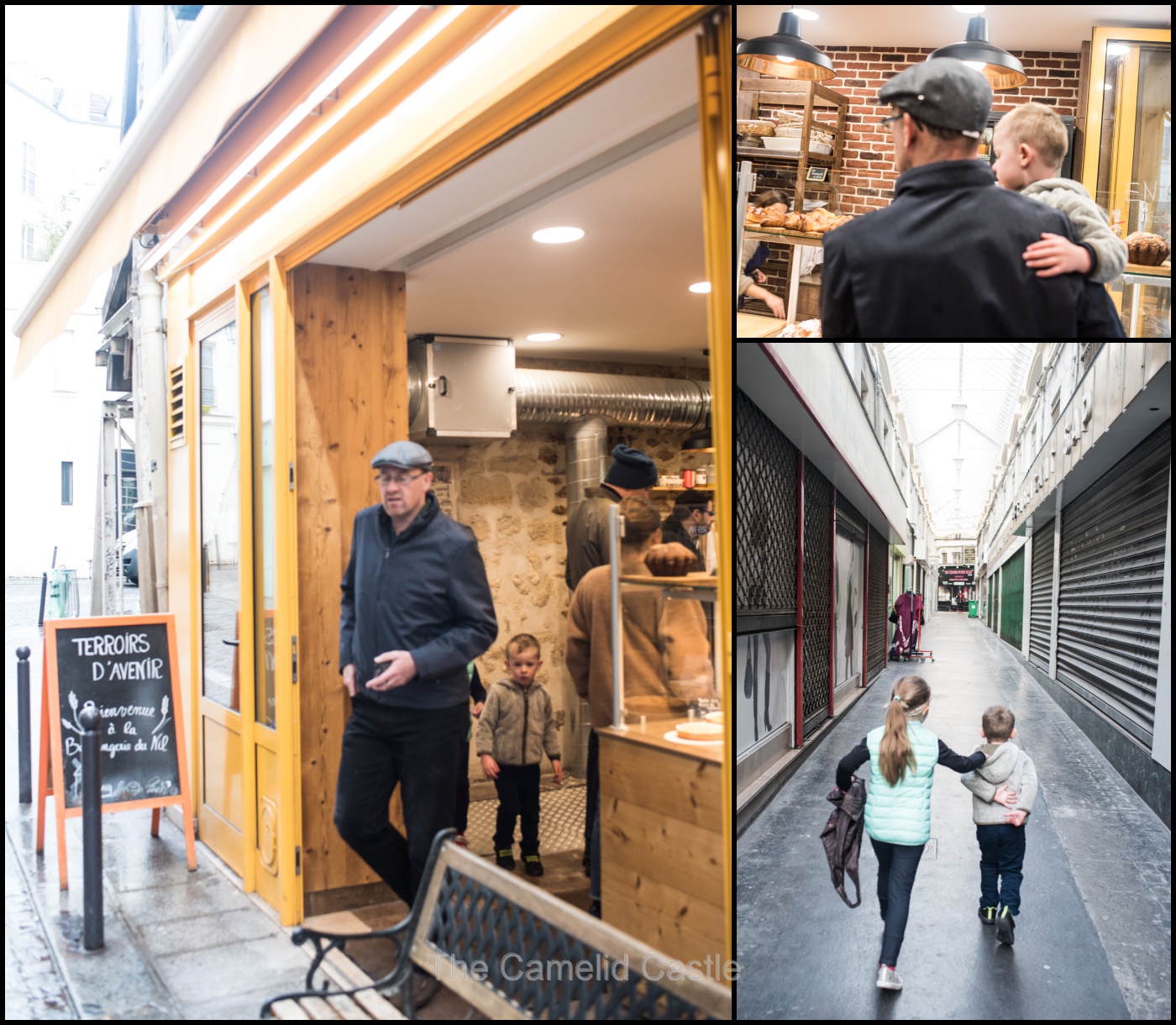 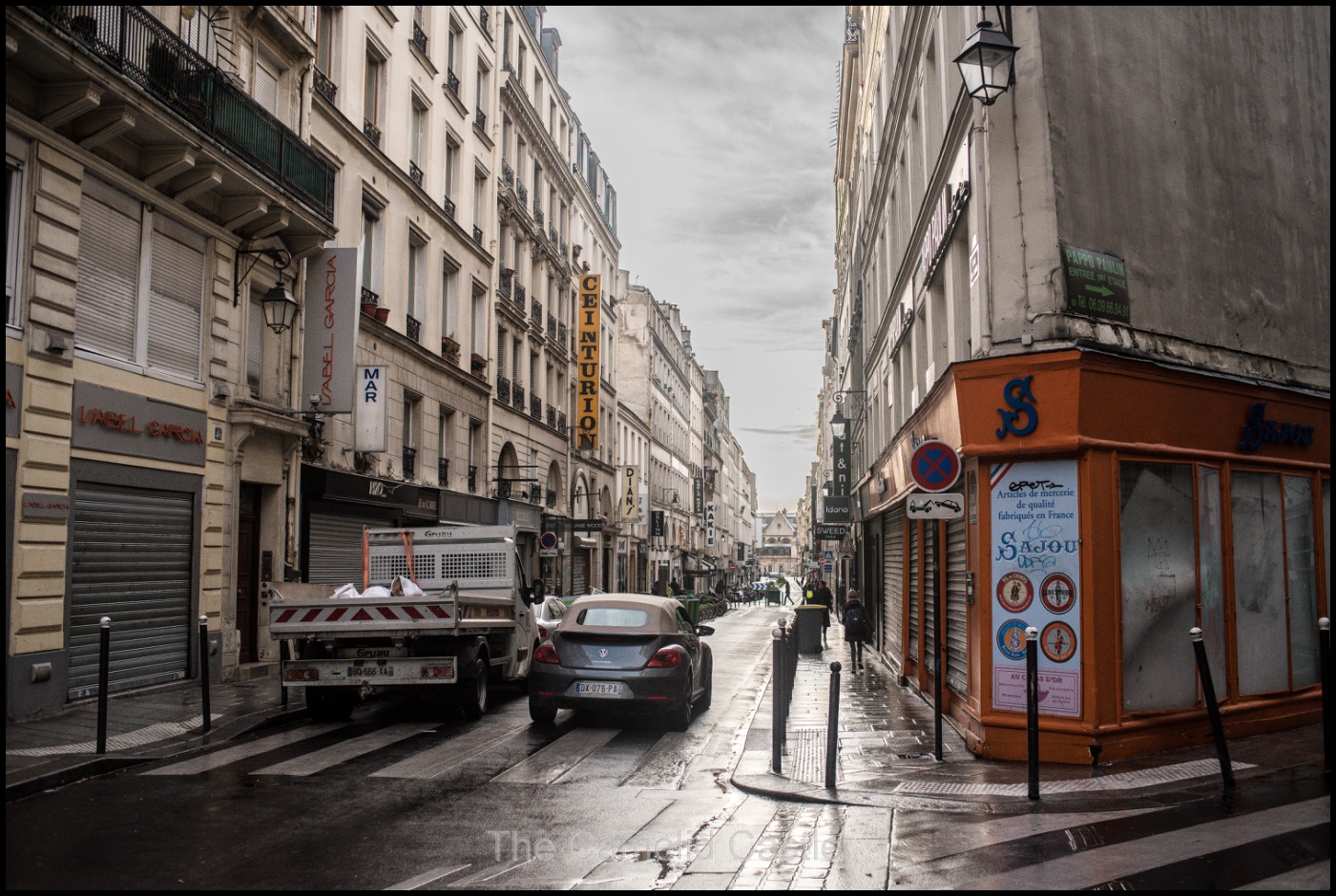 Like many days, it had been raining overnight and the streets looked pretty in the morning light.

Back in the apartment and our pastries were still warm. Another delicious Parisian breakfast of croissant, almond croissants and chocolate laden pastry! 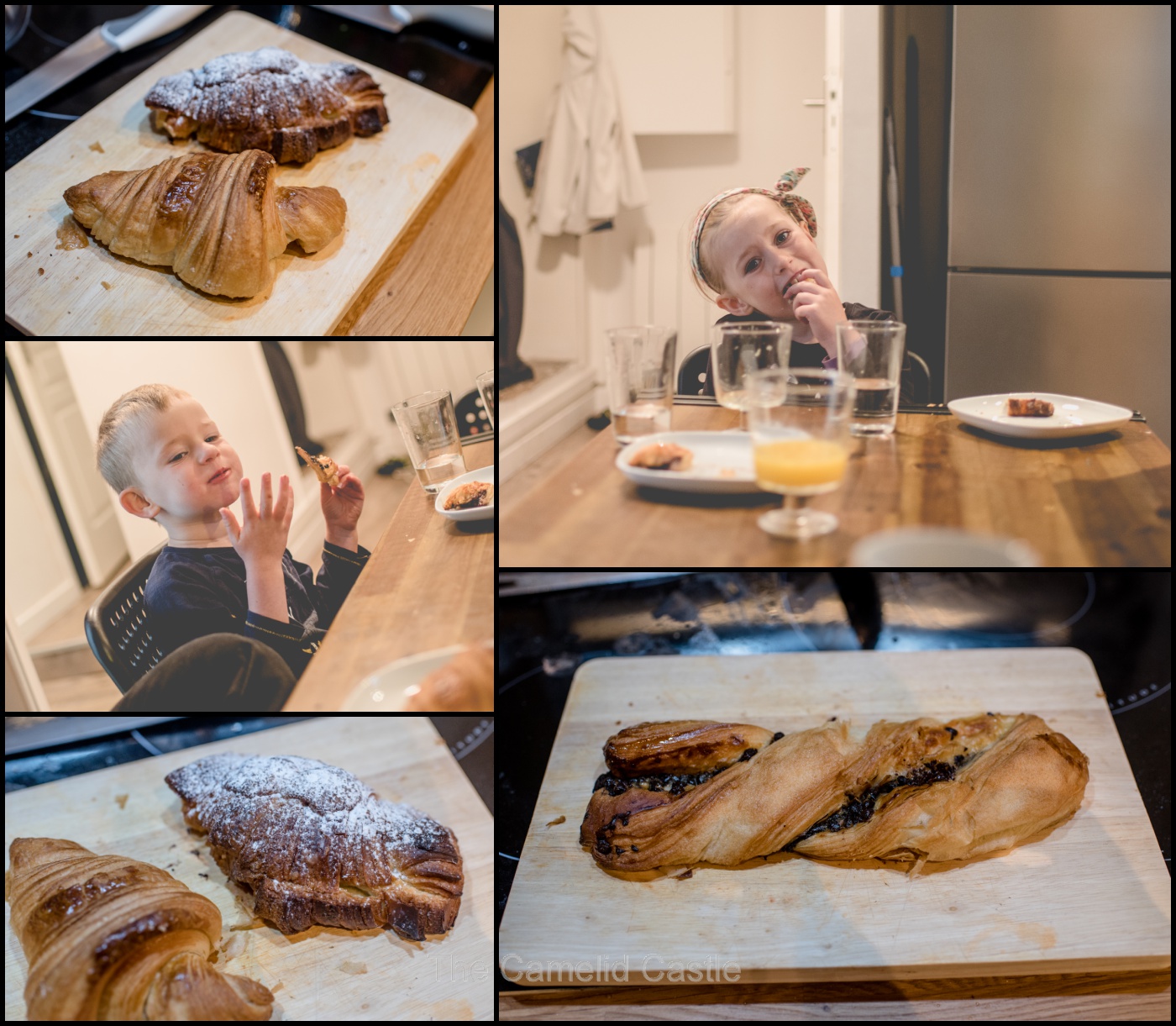 Rain was again forecast for the day but it was meant to be more on-off showers. It hadn’t gotten too cold overnight so we decided to rug up and head out and see how the day went. Our first stop was going to be the Panthéon as we hadn’t previously visited, despite walking past many times over the years.

We headed over to the Panthéon via a metro and RER.  The skies were grey but rather pretty as we exited the RER from near Jardin du Luxembourg.

The Panthéon is a building in the Latin Quarter. It was originally built as a church dedicated to St. Genevieve and to house the reliquary châsse containing her relics but, after many changes, now functions as a secular mausoleum containing the remains of distinguished French citizens.

There was no line to get into the Panthéon, which was convenient! Immediately we were all impressed with the amazing ceilings and the intricate stone carving in all the columns.  Astrid was fascinated with the fact that it was built and carved hundreds of years ago essentially by hand.  It was rather cold inside but interesting walking around, checking out the architecture, paintings and stone work. 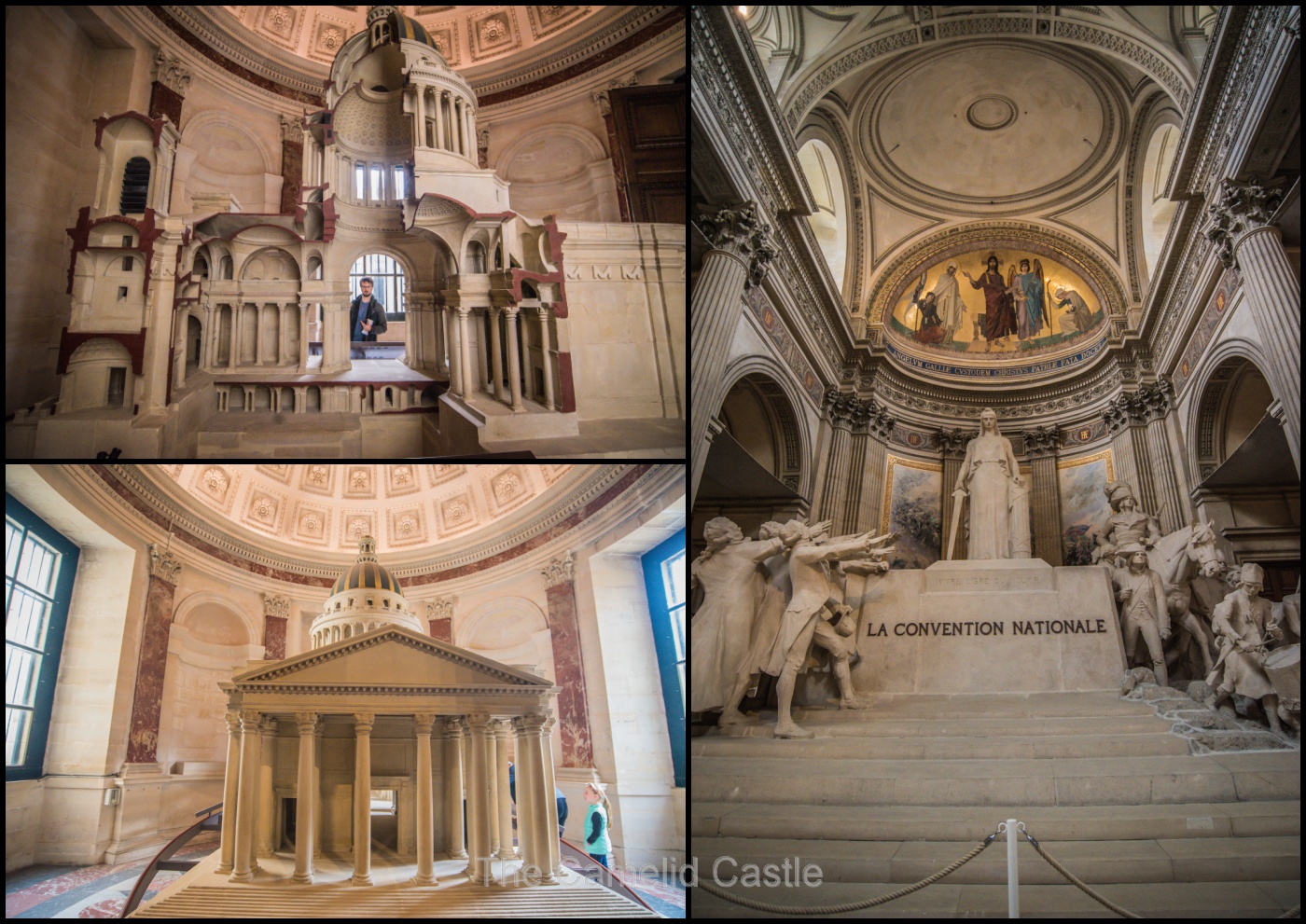 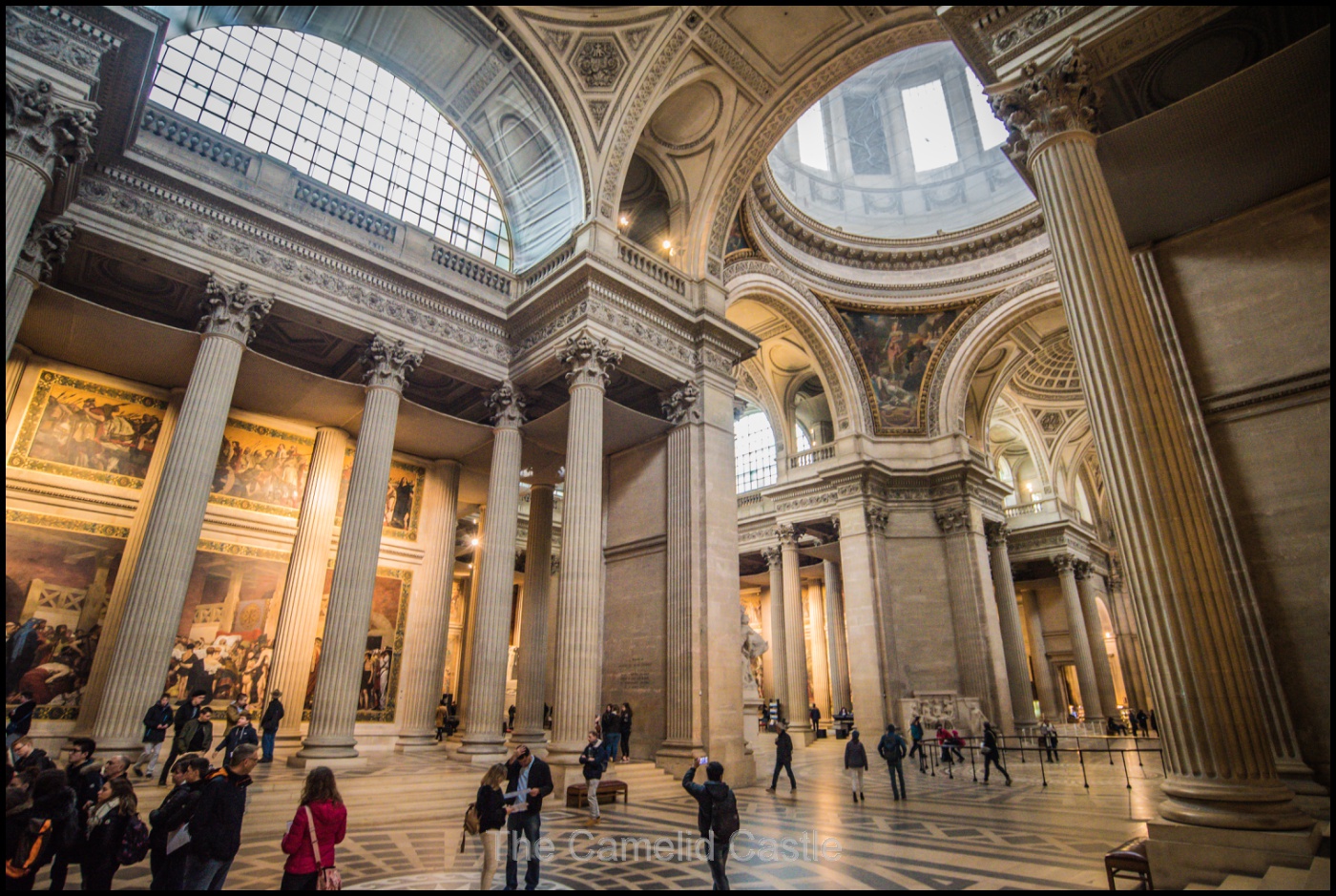 We also visited the crypt which was interesting, although took some explaining to the kids, they weren’t really sure why people would be buried there or in such a way.  Prior to our visit was hadn’t realised how many people were buried within the crypt, going through the different rooms was a lesson French history over the past few hundred years.  Many names were familiar but there were plenty who were not.  One person of interest to us was the casket of Marie Curie (who was buried next to her husband).  This meant the kids got an impromptu science lesson too! 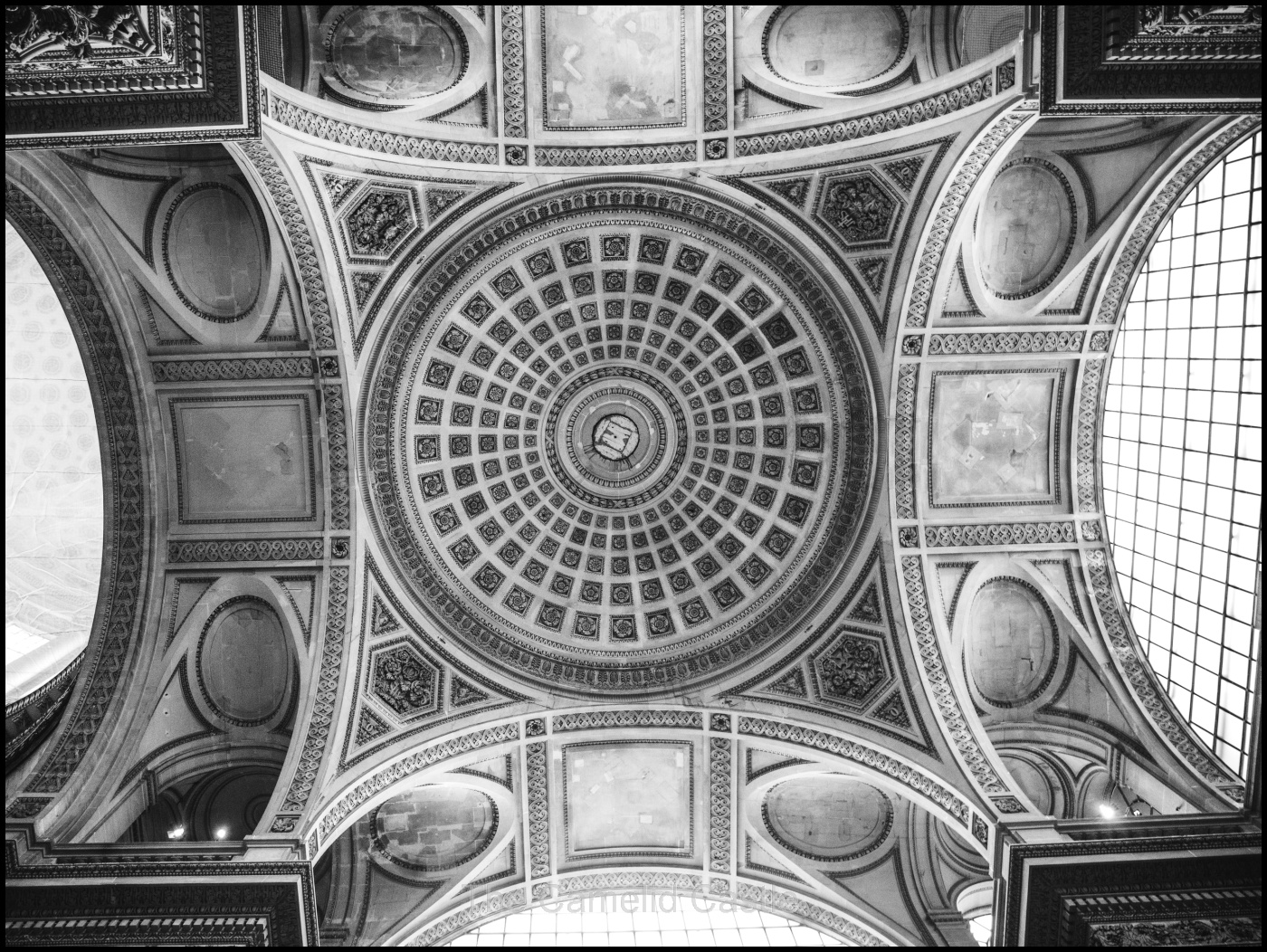 Unfortunately, during the time we were in Paris the Foucault Pendulum was not in its usual spot in the Panthéon due to maintenance. We would have loved to have seen it, so figured we’d just have to come back on a future visit.

As you come out of the Panthéon, you get a really nice view of the Eiffel Tower. Despite having seen the Eiffel Tower probably hundreds of times by now, the kids get excited every time they see it! 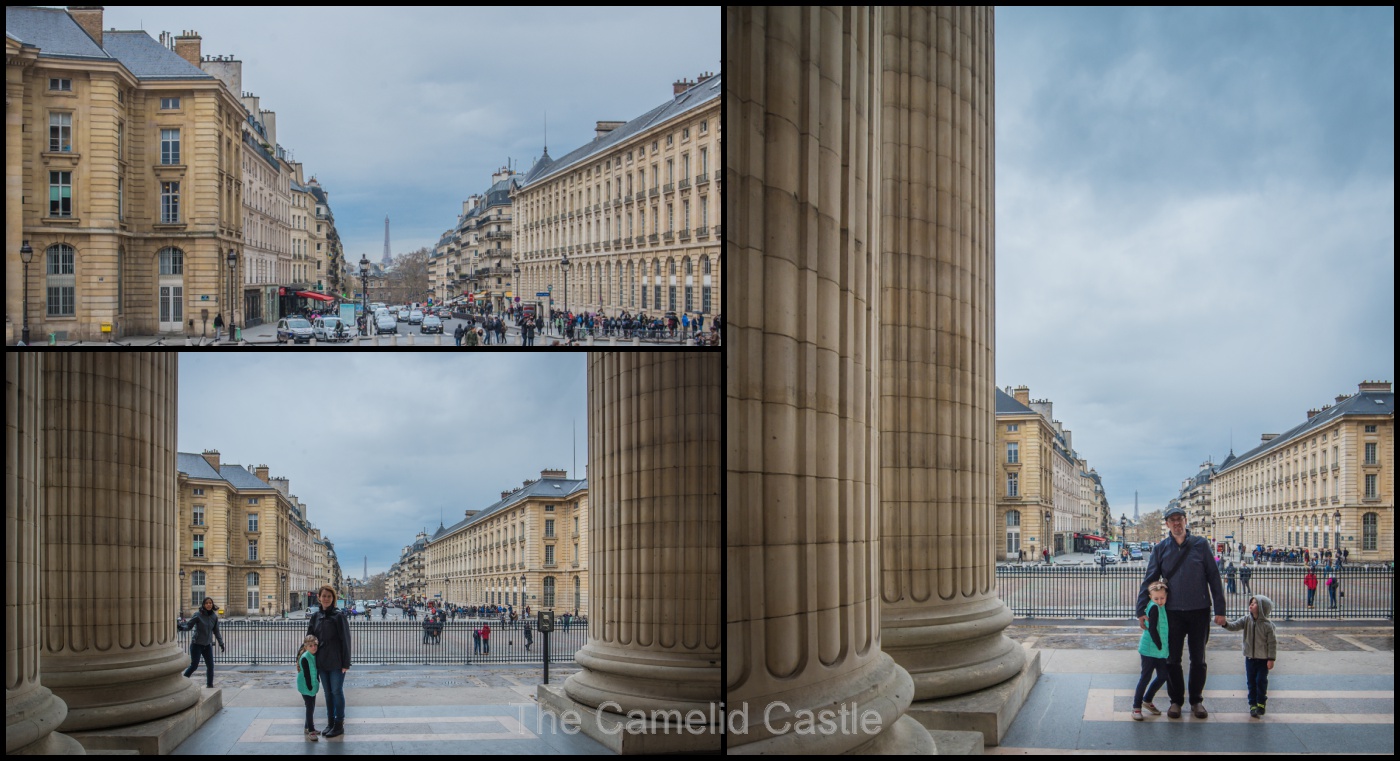 As we exited the Panthéon it was just starting to rain, but at this stage it was only spitting so we went for a quick wander through the nearby Jardin du Luxembourg, a favourite of the kids.

After quite a lengthy discussion about the weather before departing the apartment, Astrid had decided she really didn’t need her coat (despite my advice).  It was now on the cold and wet side, and she was starting to regret that decision!  This meant we had a rather abbreviated visit to the pond to see the ducks and a quick wander past the flowers before Astrid voted for heading indoors. 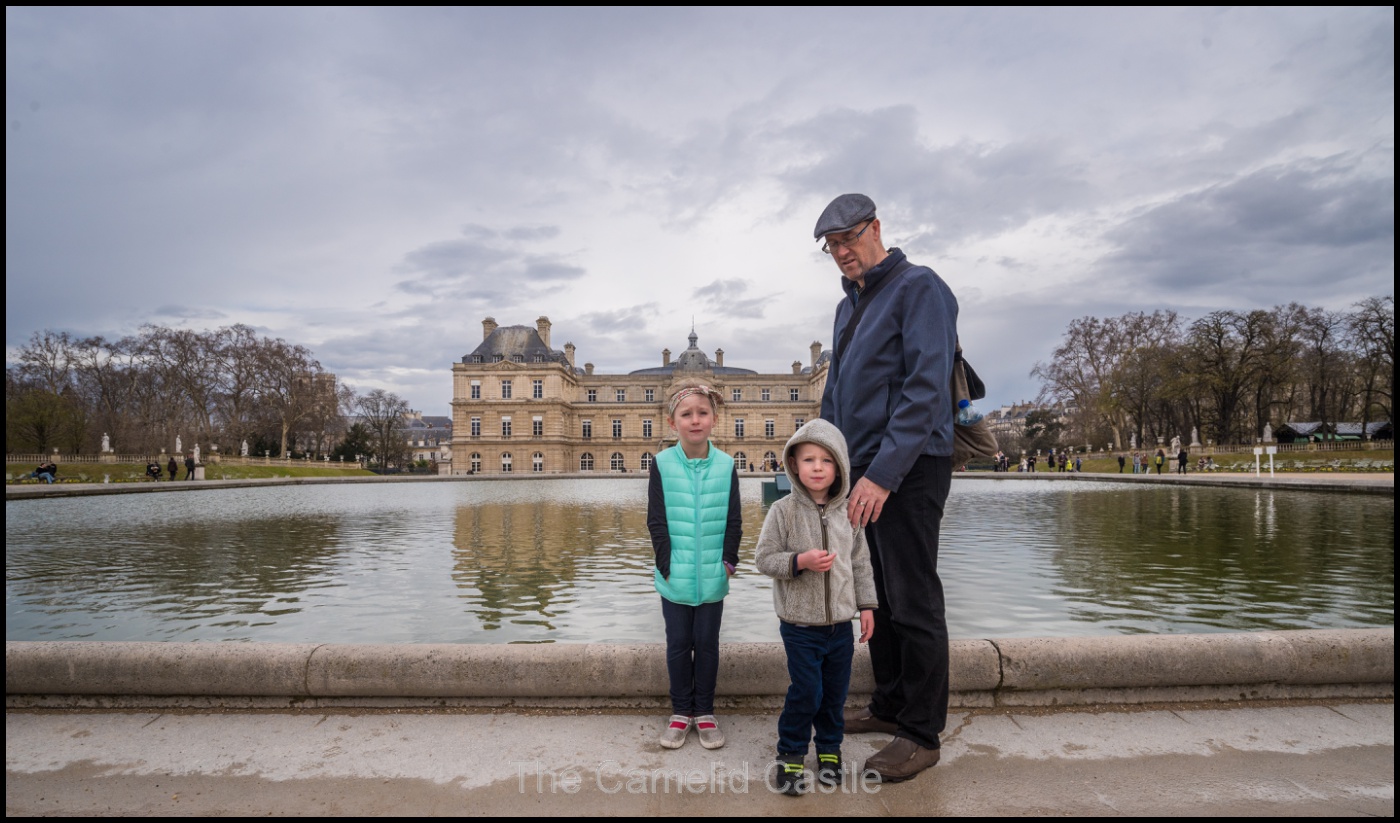 Given the weather (and cold 6-year-old) we decided to RER over to the Opera.   Pretty soon we popped out at Palais Garnier.  We’d last visited in 2012 with a 1-year-old Astrid, unfortunately during our visit she had gone from having a cold to being quite unwell (necessitating an afternoon trying to locate an English-speaking doctor in Paris).  We had loved the building but didn’t get to see everything we wanted so had been meaning to come back for years.

Anto and I had managed to get ourselves tickets to see a ballet performance at the theatre in a couple of days time.  We’d been talking about it with the kids and they were keen to go and visit the building and see where we’d be going when got all dressed up!  Palais Garnier is a beautiful building both on the outside and inside…… 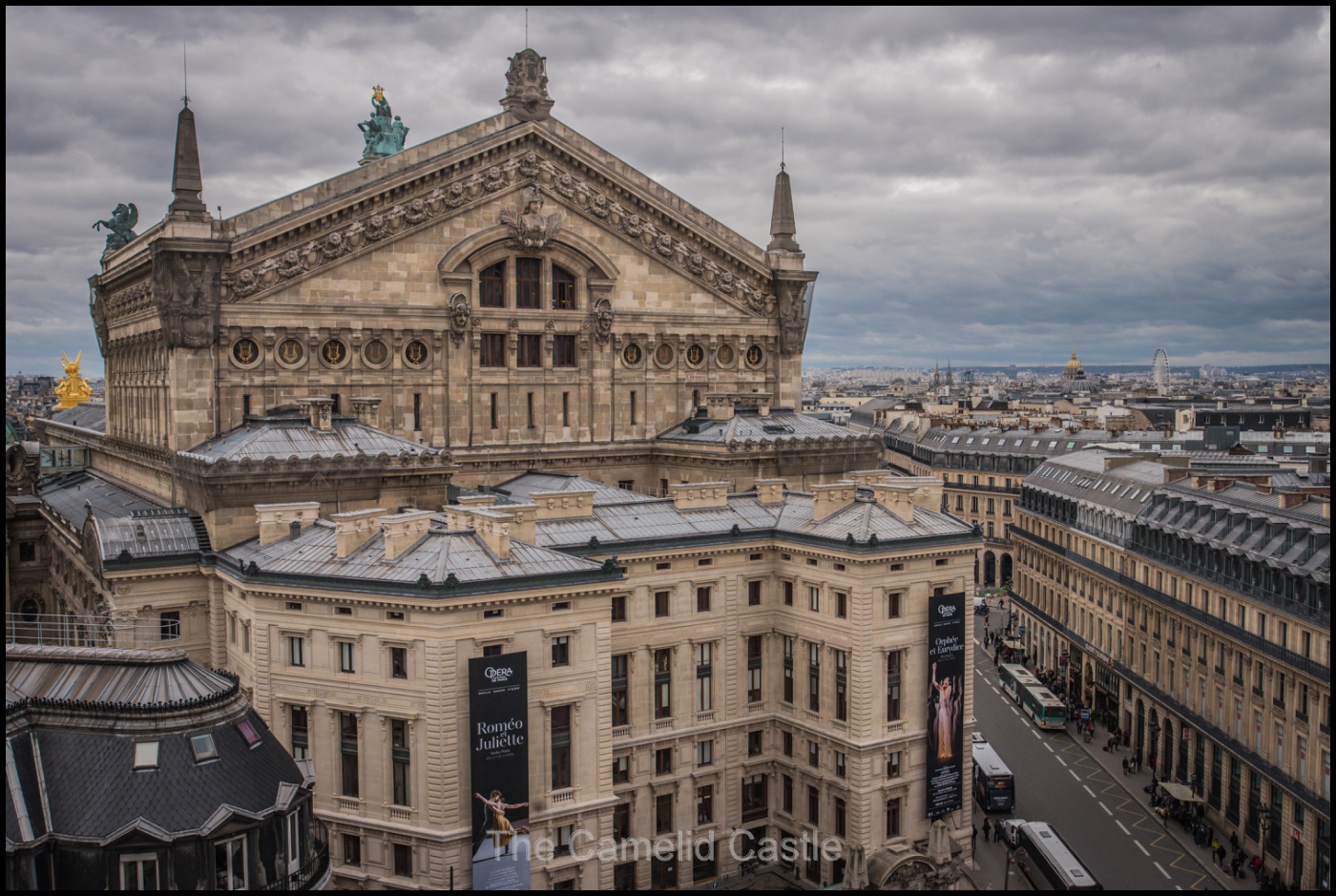 The Palais Garnier is a 1,979-seat opera house, which was built from 1861 to 1875 for the Paris Opera. It was called the Salle des Capucines, because of its location on the Boulevard des Capucines in the 9th arrondissement, but soon became known as the Palais Garnier, in recognition of its opulence and its architect, Charles Garnier. The theatre is also often referred to as the Opéra Garnier and historically was known as the Opéra de Paris or simply the Opéra, as it was the primary home of the Paris Opera and its associated Paris Opera Ballet until 1989, when the Opéra Bastille opened at the Place de la Bastille. The Paris Opera now mainly uses the Palais Garnier for ballet.  While I was excited to be seeing a ballet in Paris, I was particularly thrilled to be seeing one at Palais Garnier as it is the most magnificent building!

The kids were immediately enchanted by the magnificent central staircase and all the balconies.  We were happy doing a self-guided tour and wandered up the stairs and showed them the views from the upper level balconies. 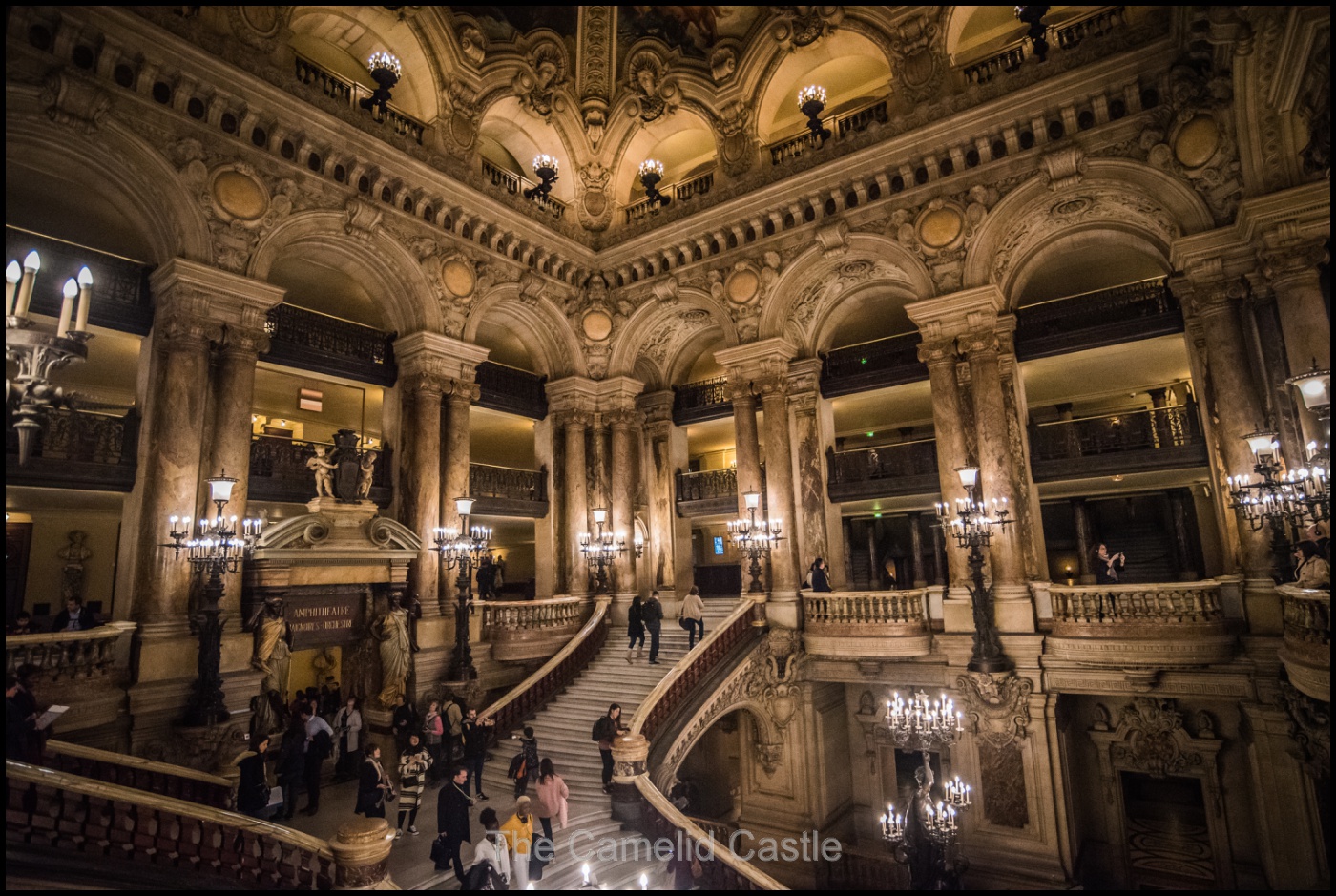 Throughout the corridors of the building there are costumes on display from previous performances. The kids loved the ‘pretty outfits’ and enjoyed pretending to be ballerinas. 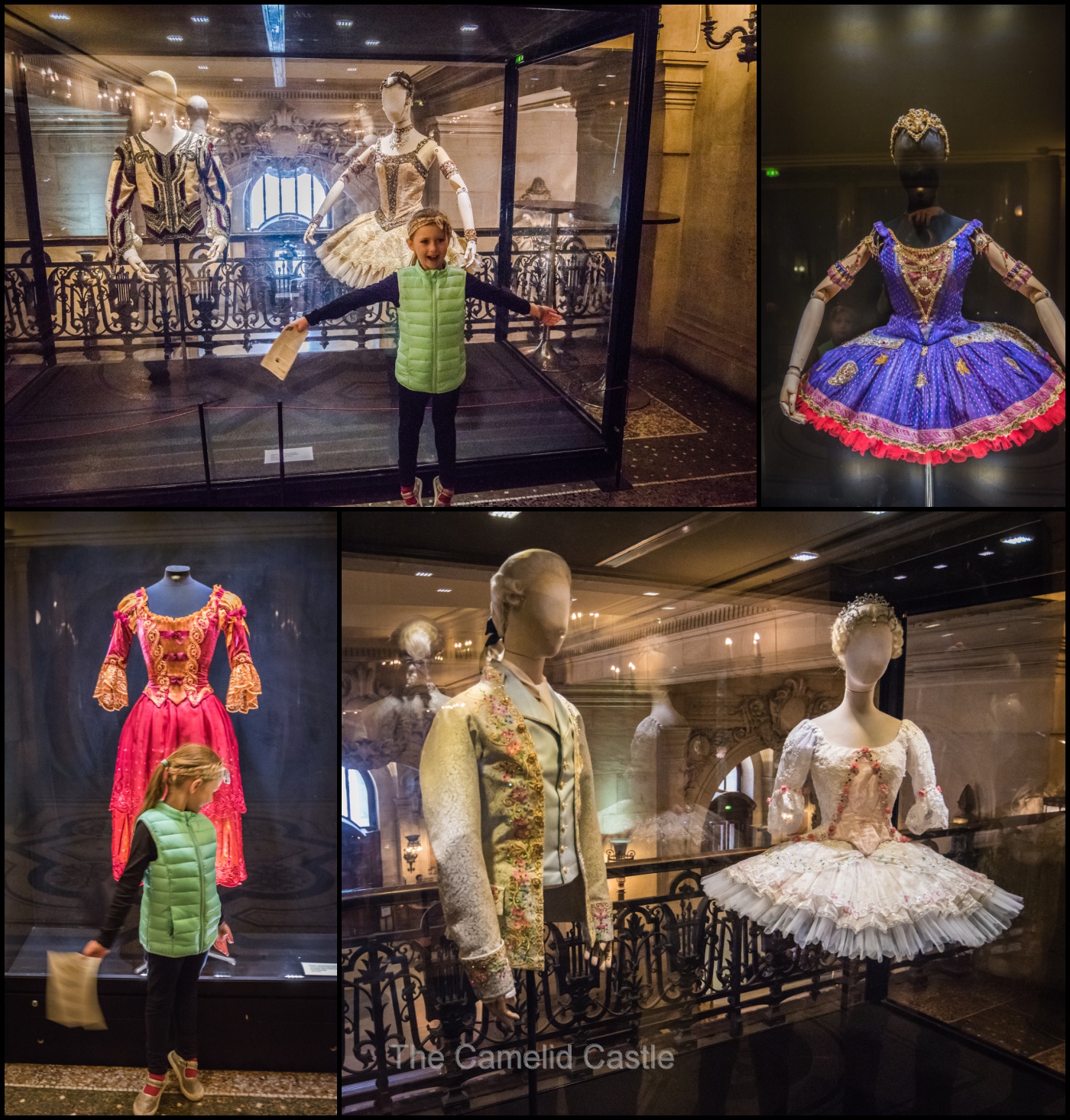 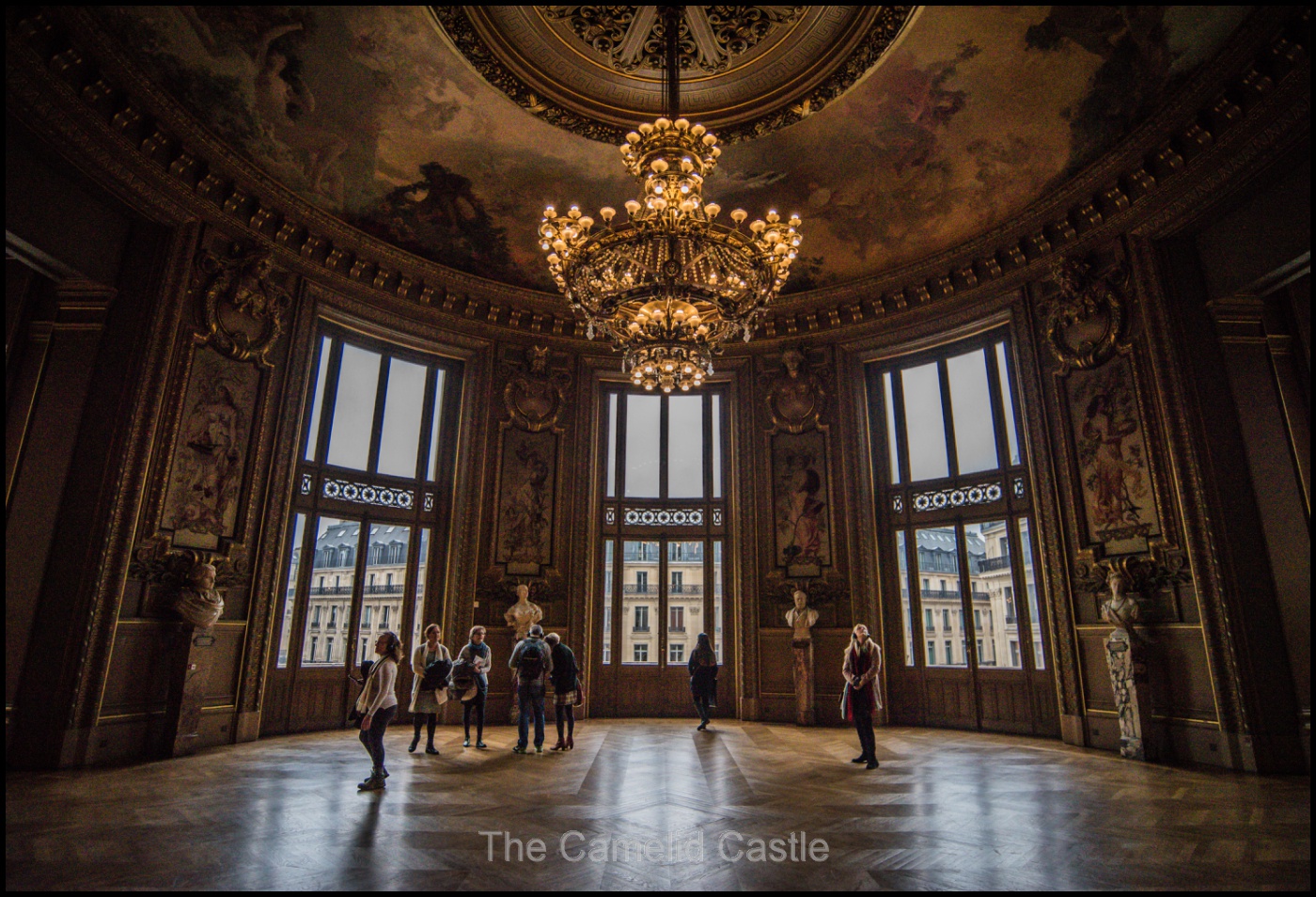 Everywhere you turn there is another wonderful view, pretty chandelier or impressive room – the library and the main hall amongst my favourites. The kids were getting into the theatrics of the space, constantly doing dance poses! 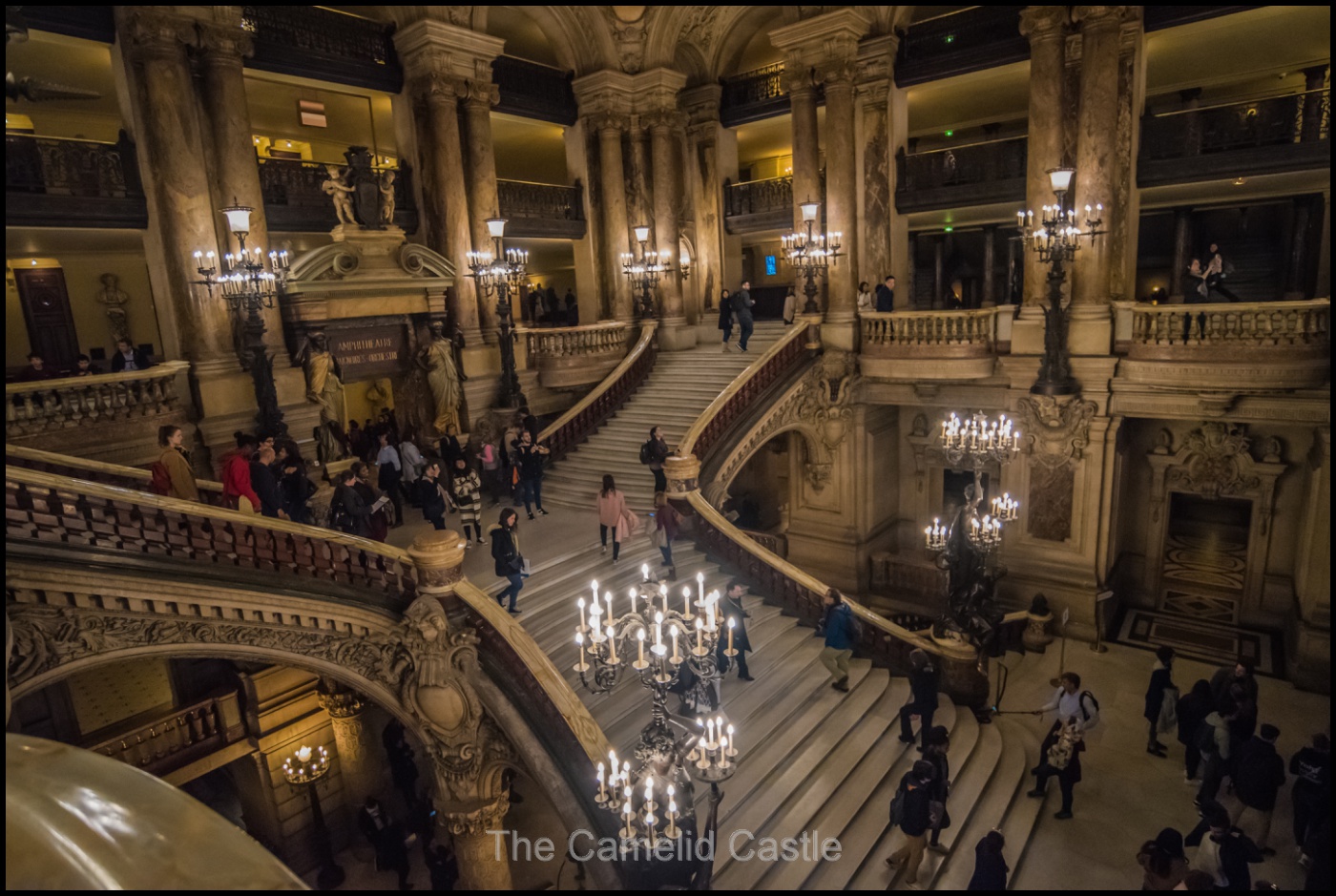 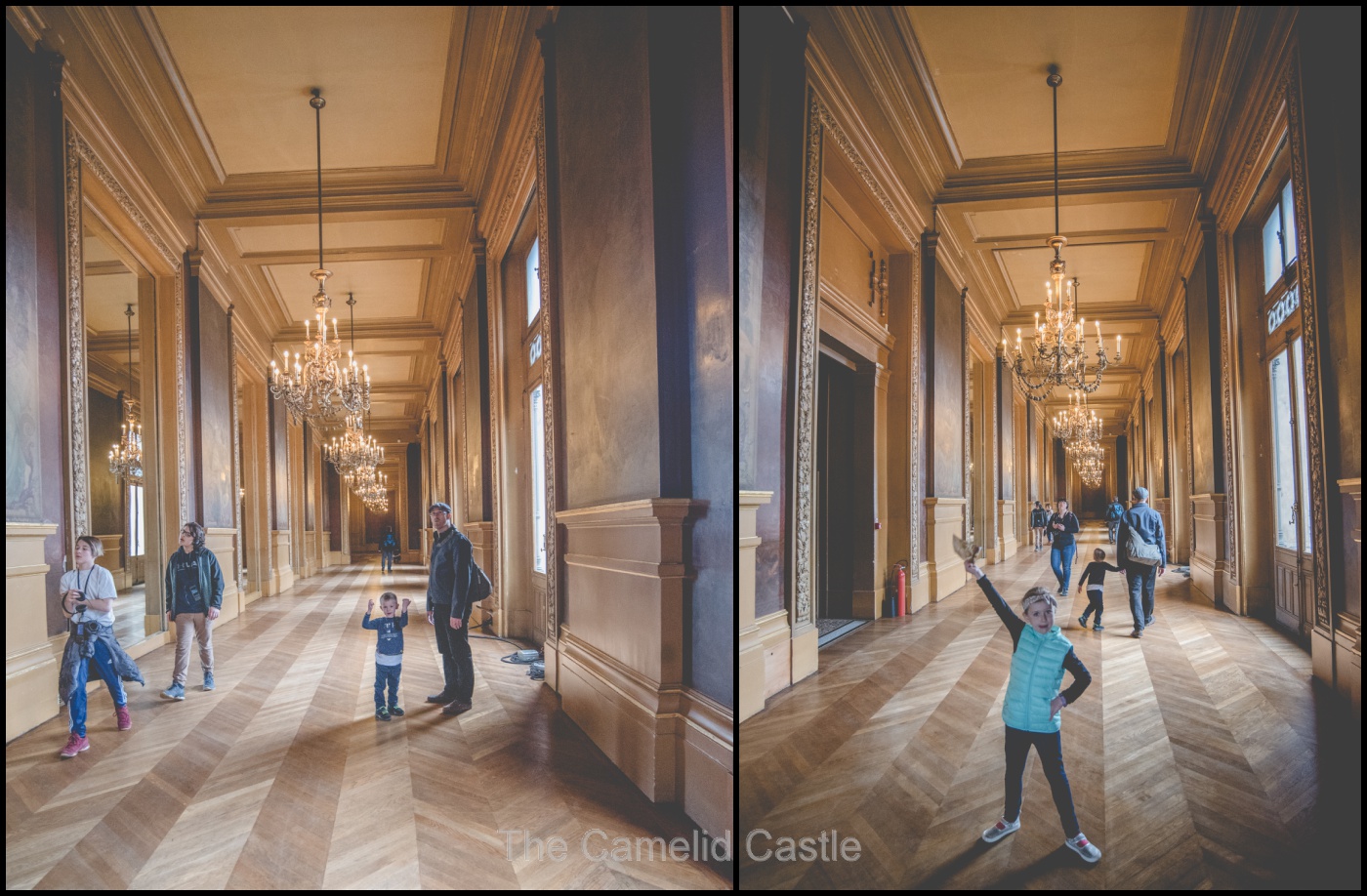 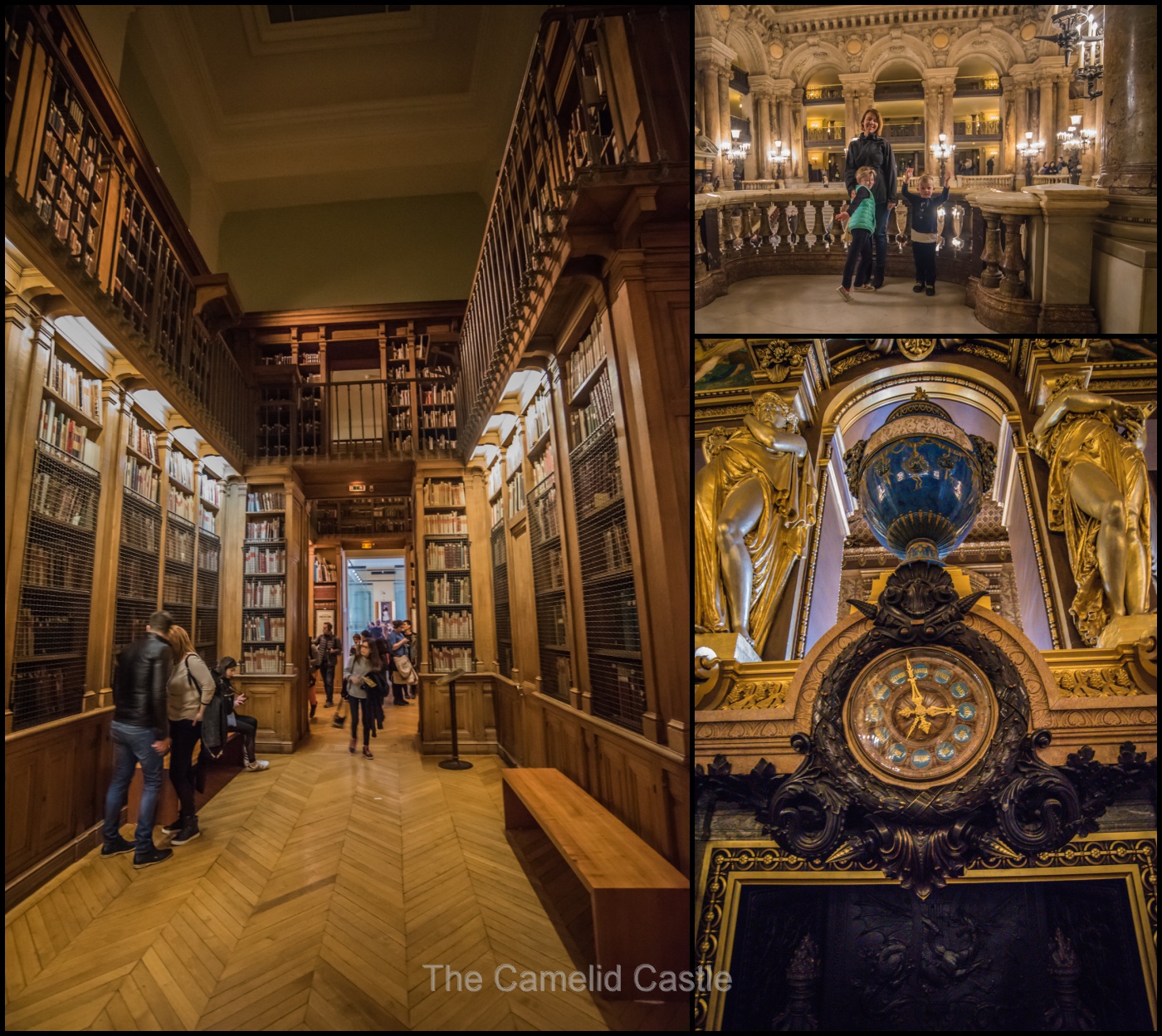 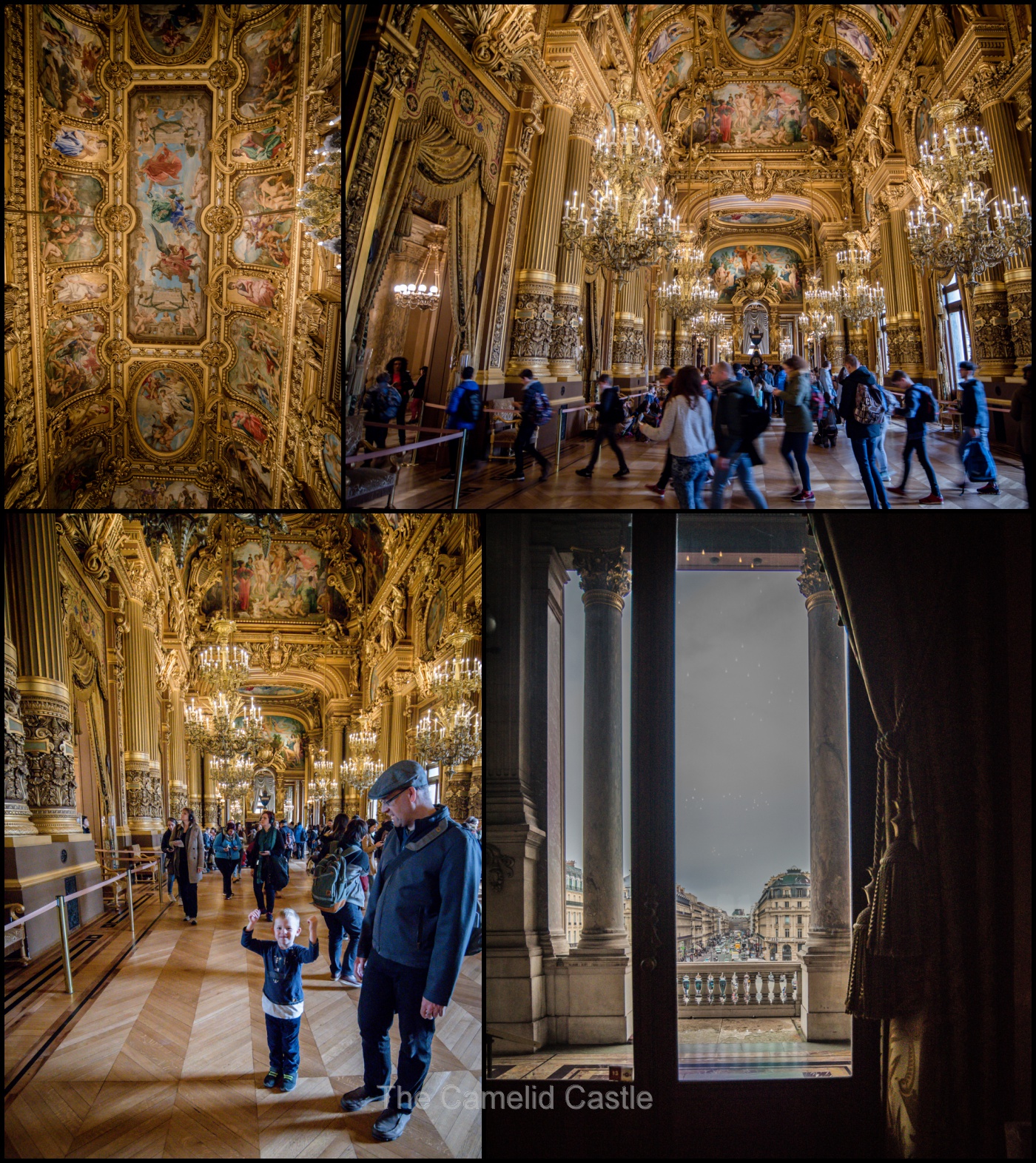 After we’d wandered through most of the accessible areas of the building we took the kids inside the theatre to see where ballets and operas were performed.  They were both impressed at the beautiful colours and ceiling art and desperately trying to work out which seats mum and dad were going to get to sit in!  We couldn’t remember our exact seat numbers so were also trying to work it out…….. 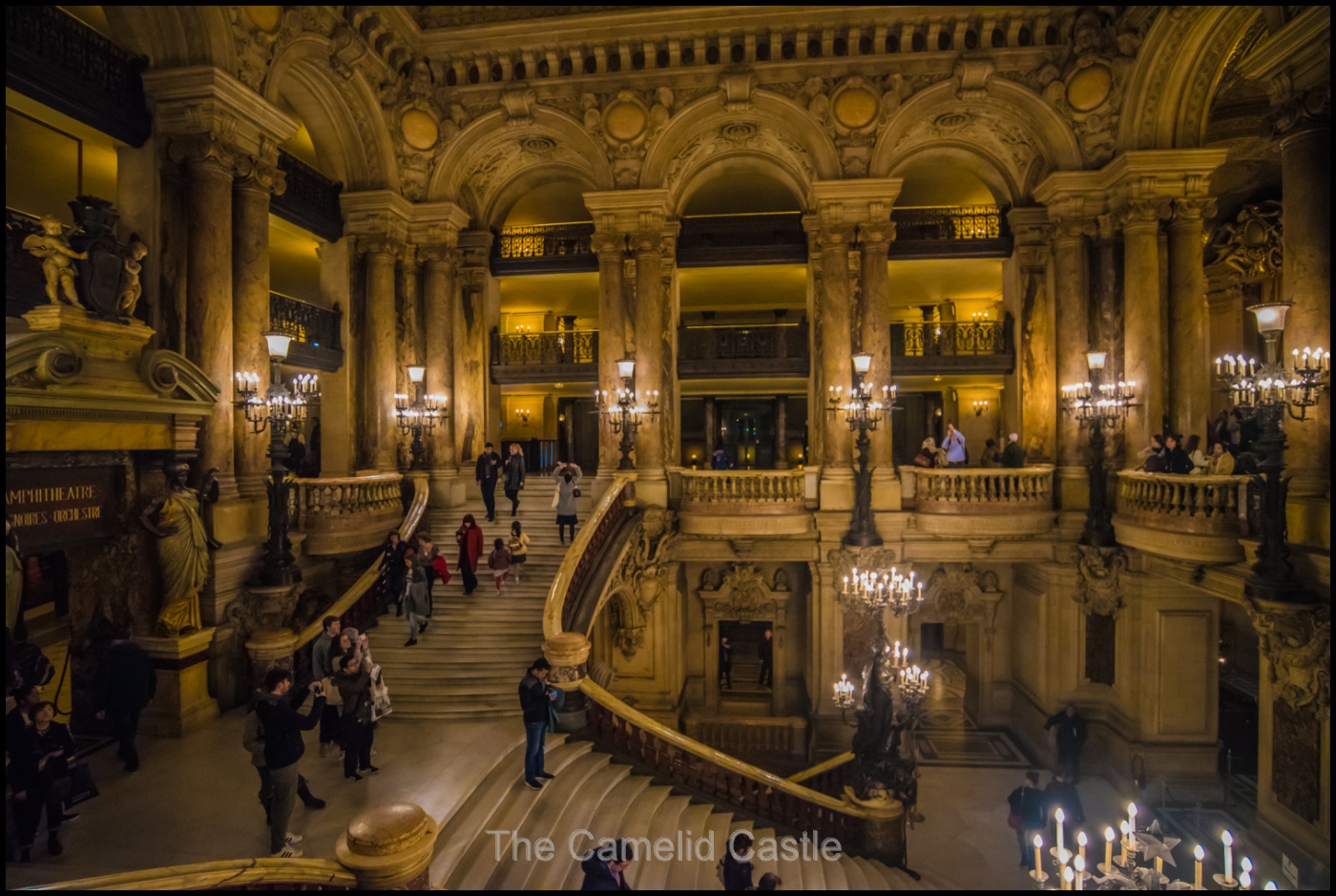 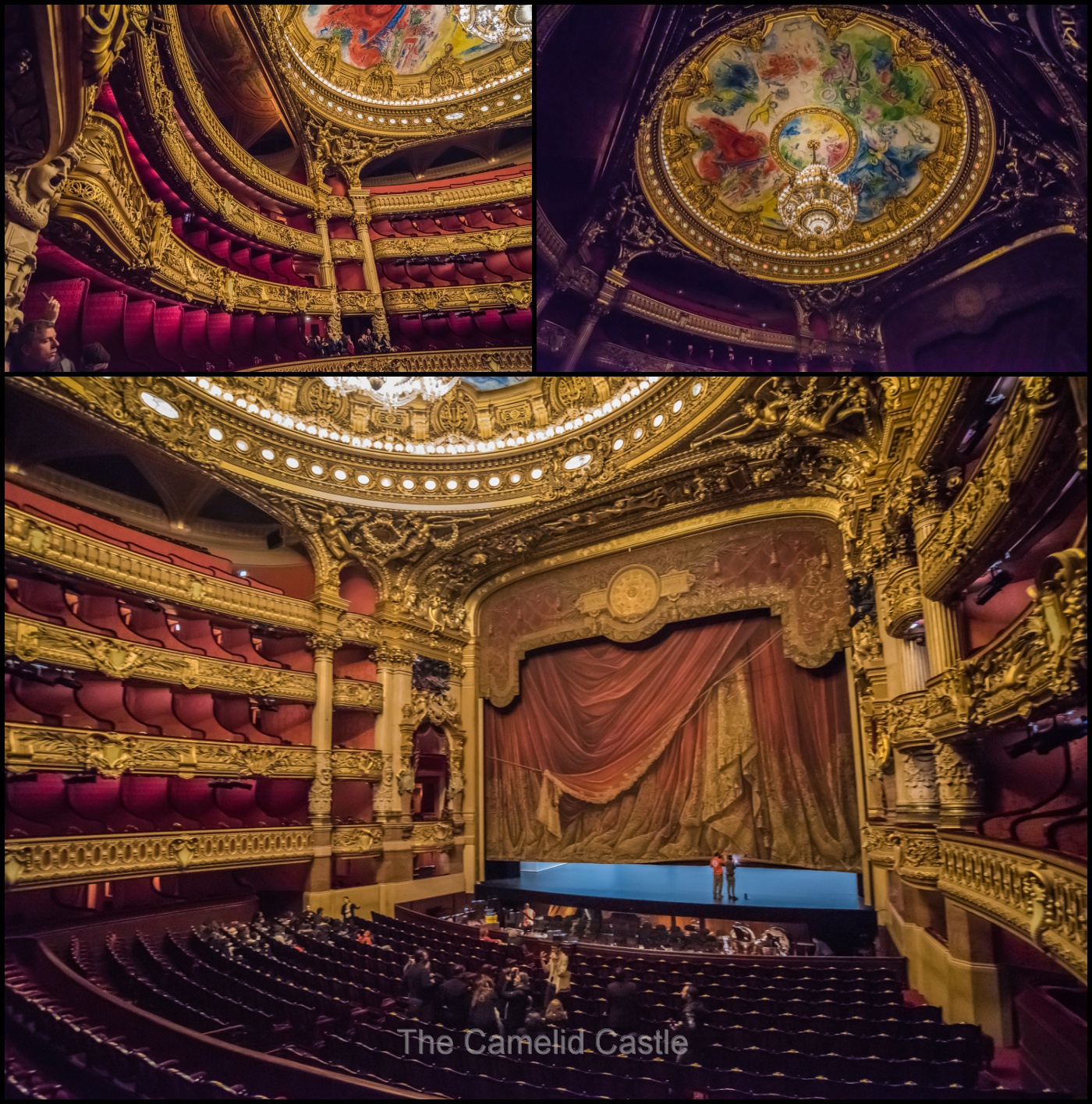 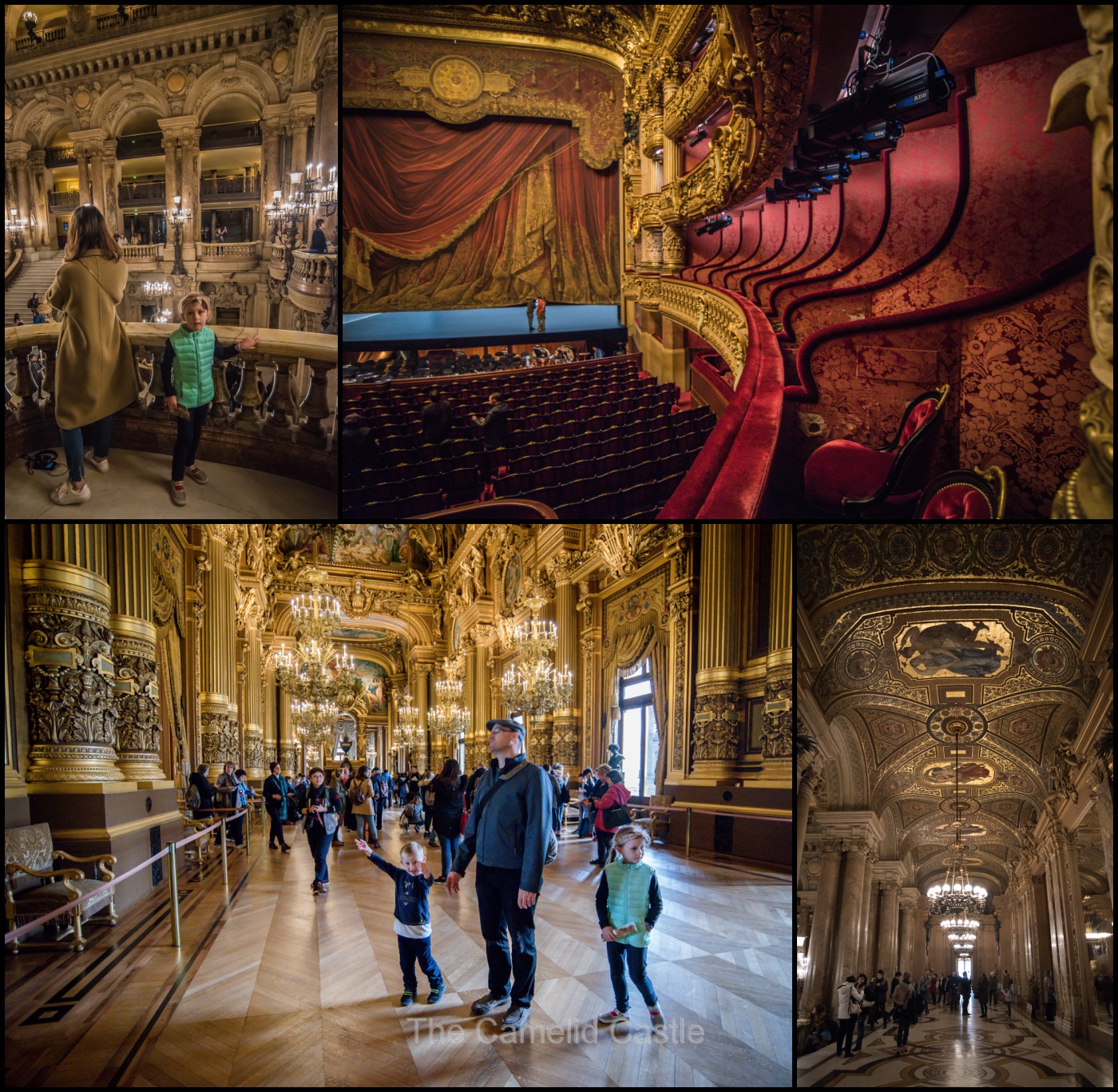 We had all thoroughly enjoyed our visit to the Opera, and this time no one was sick!  It made Anto and I super-excited about returning in a couple of days time to see the ballet, more dressed up than we had been today.

We bid farewell to the warmth of the Opera building and walked across to Galeries Lafayette shopping centre.  We never actually shop at Galeries Lafayette as it’s hideously expensive (our preferred shopping haunts are Le BHV in the Marais and Forum des Halles).  However the Galeries building is indeed a sight to behold. So given we were in the neighbourhood we figured we’d take the kids for a visit.  If you are ever in Paris, it’s worth a trip to Galeries Lafayette to see the amazing central foyer and the roof, it is worth the trip, just don’t expect to be able to afford to buy much! 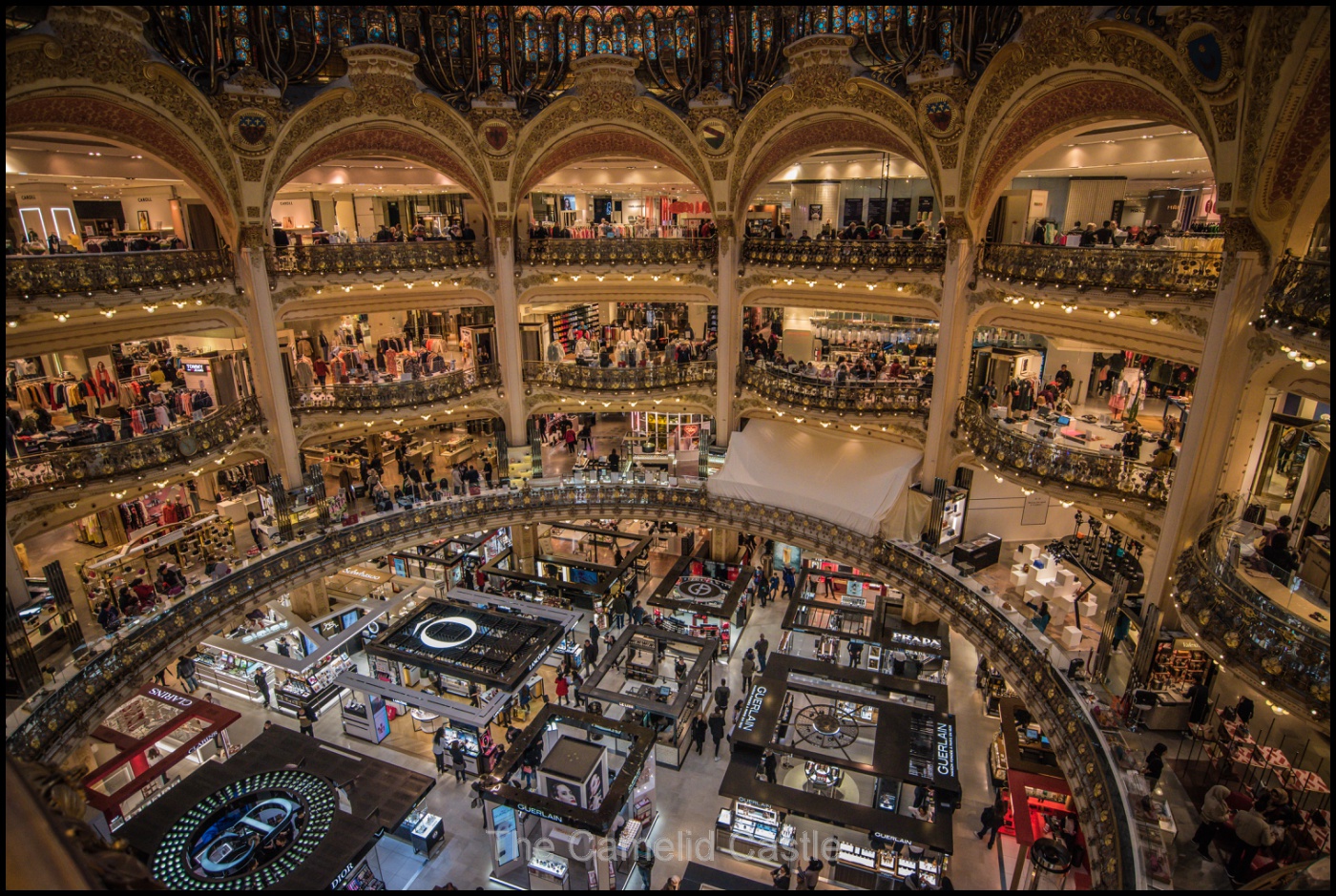 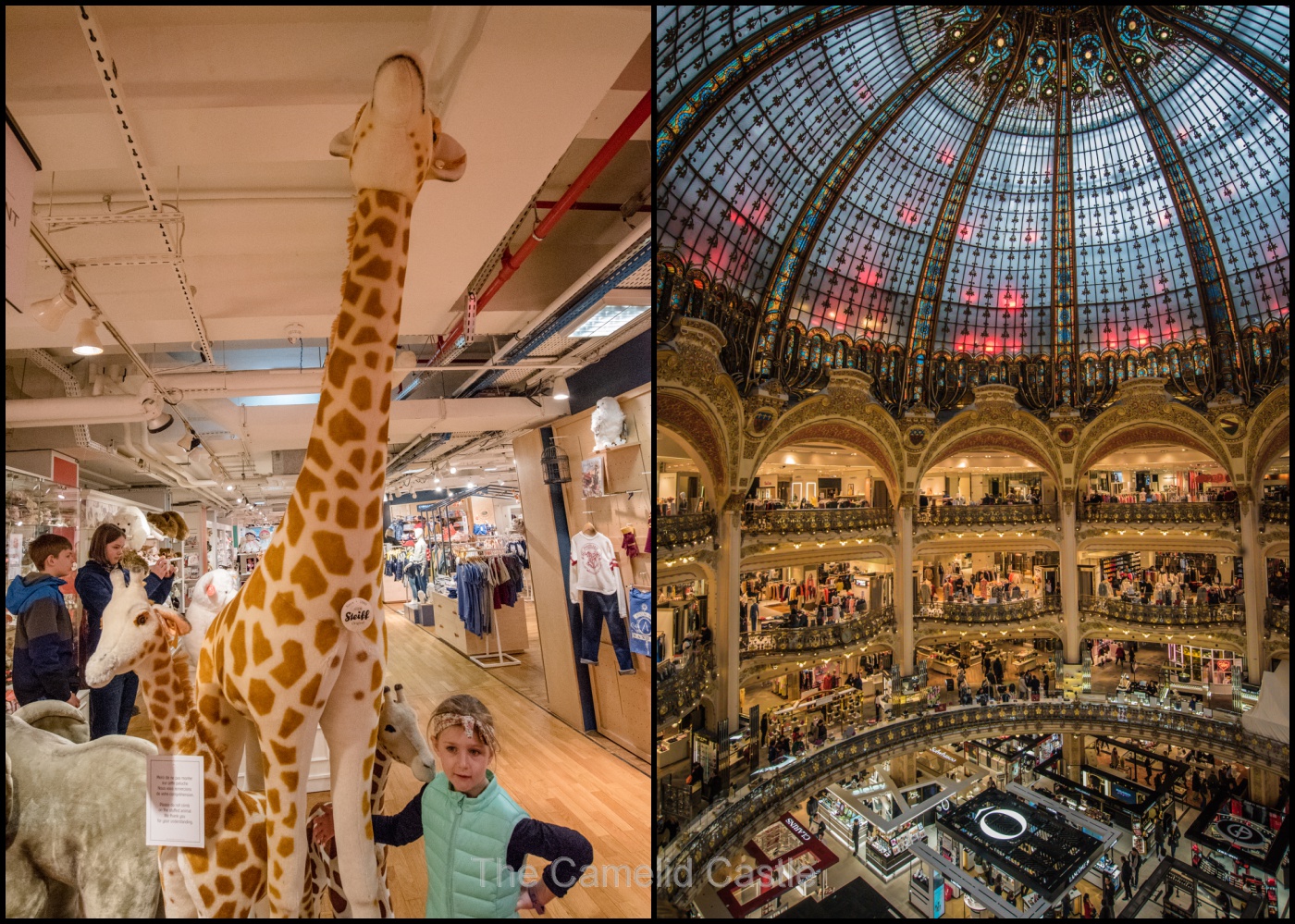 After a wander around, and again establishing that the prices (even the sale ones) were not going to have us buying anything, we paid a visit to the terrace.  From the terrace you get nice views over the city and of the  Palais Garnier.  The stormy skies made for wonderful photos but it was windy and absolutely freezing!  Kind of like the last time we were there………. 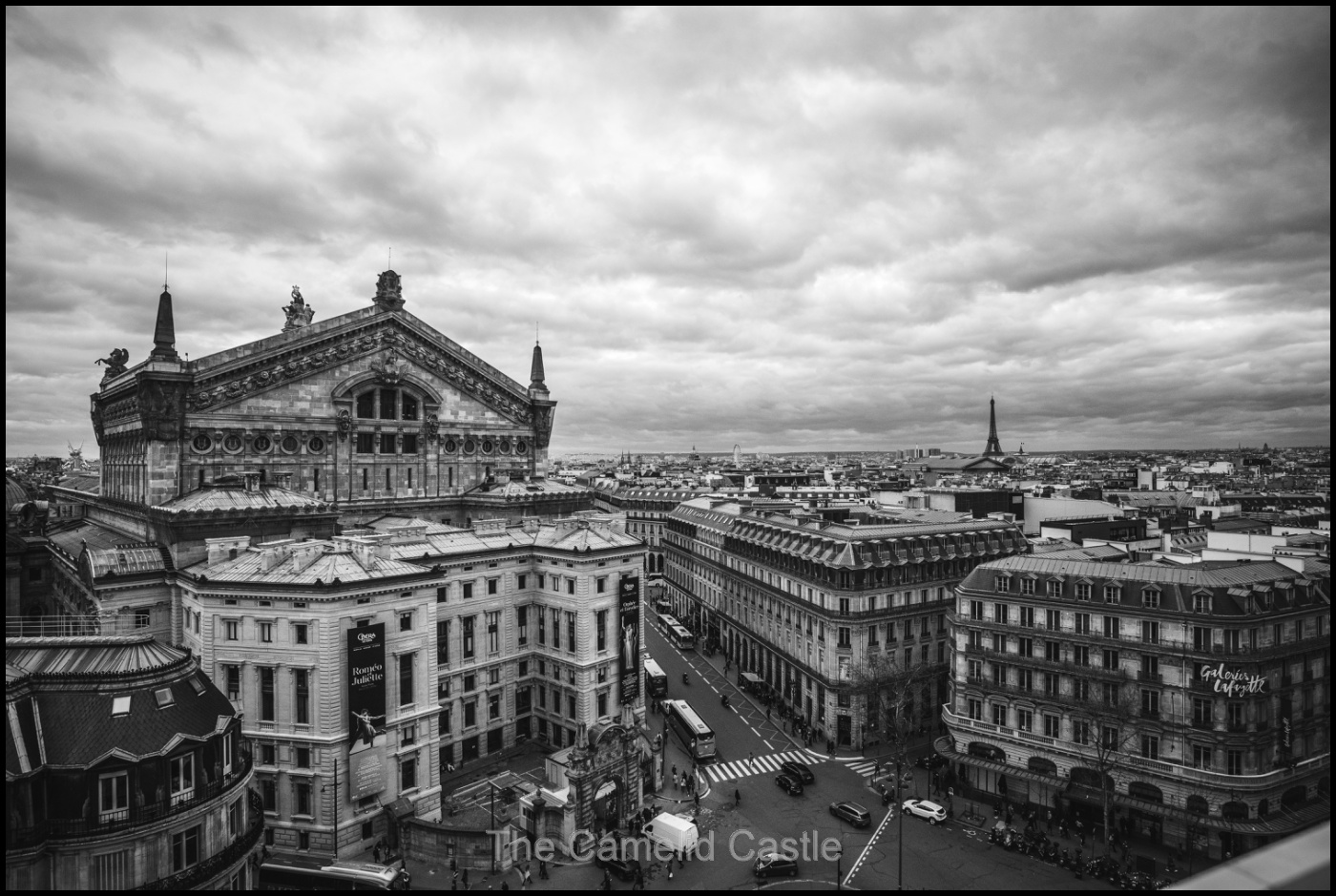 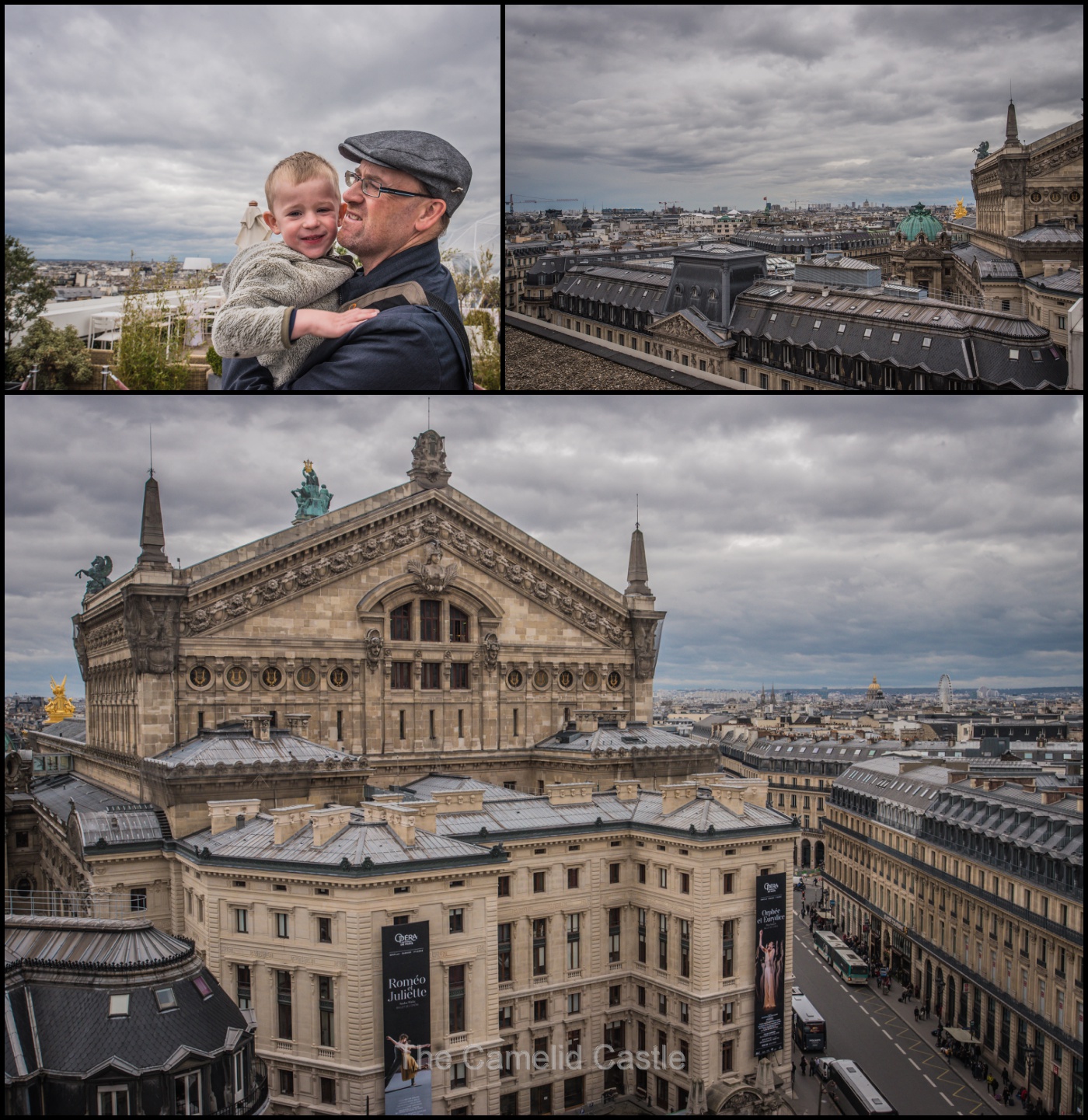 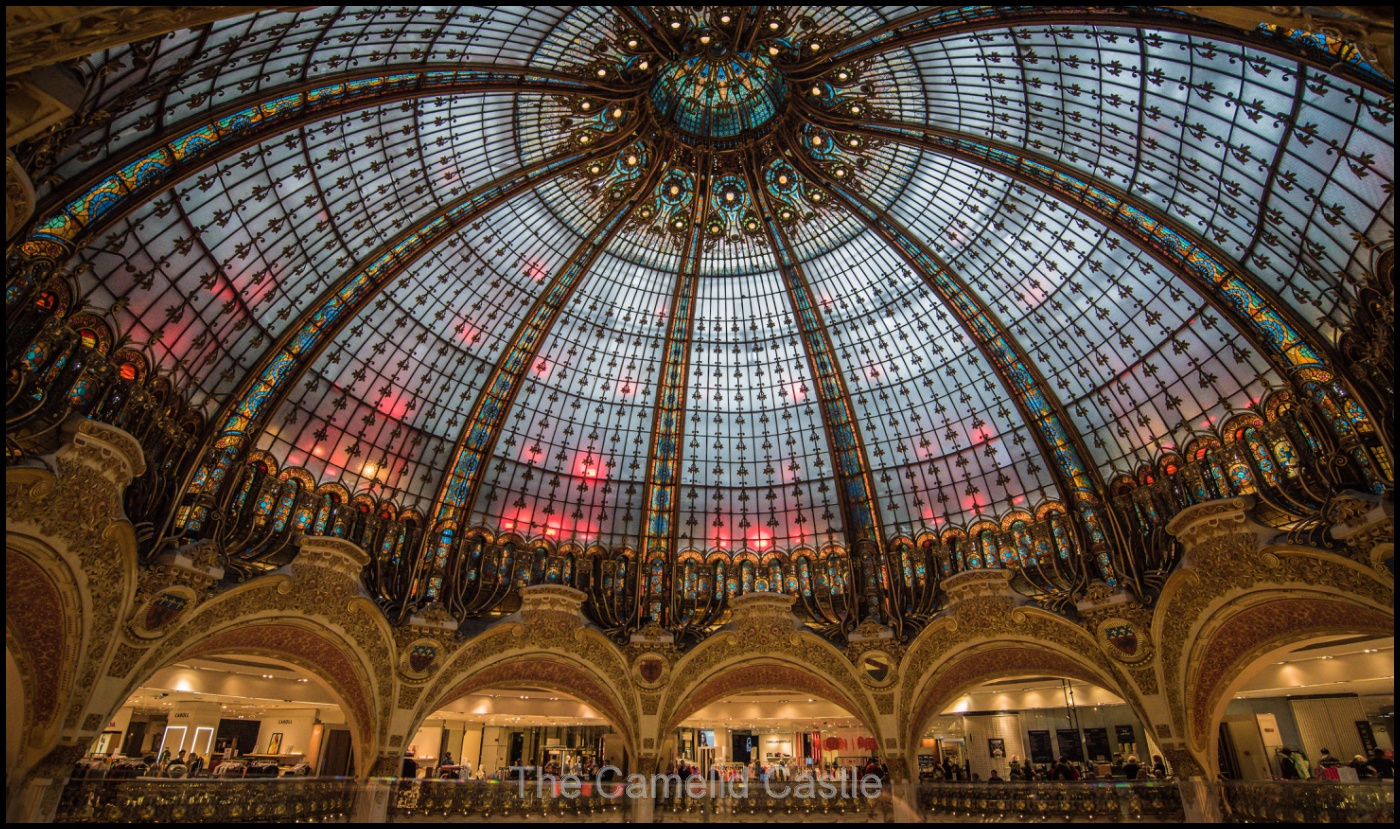 Despite a big breakfast it was now past lunch time and we were all a little hungry.  We’d thought we might eat in one of the restaurants or food courts in Galeries Lafayette.  Unfortunately they were all either extremely busy or extremely expensive (usually both) so we decided to try our luck elsewhere for food.

We’d promised a crepe to the kids as we’d been in Paris a few days now and somehow had managed to not yet eat crepes.  We weren’t excited by any of the cafe options in the area so we decided to walk back towards the apartment, keeping an eye out for suitable crepe vendors.  Sure enough along the way we found a street vendor cooking fresh crepes, so the kids were in luck.  They shared a giant chocolate and banana crepe and Anto and I shared a sugar and lemon……….. 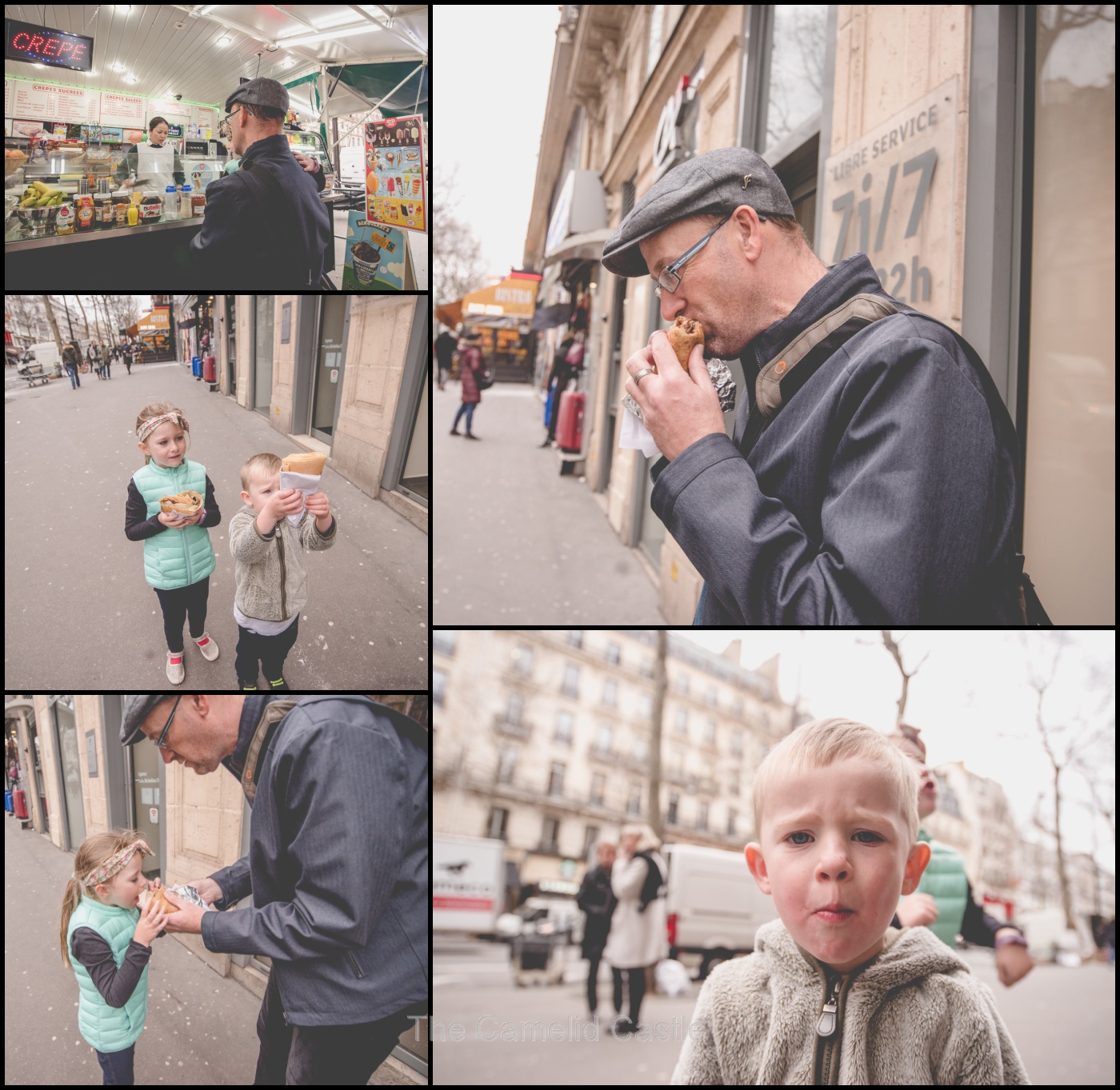 Of course immediately after our crepe purchase and consumption, we saw plenty more street vendors, but our crepes were hot, huge and quite cheap so made for a good lunch on the run.  We’d also managed to fulfill our crepe promise for the day so had 2 happy kids.

With hot crepes in our tummies the rest of the walk back to the apartment was pleasant, if a little on the cold side.  Especially for the under-dressed Astrid. 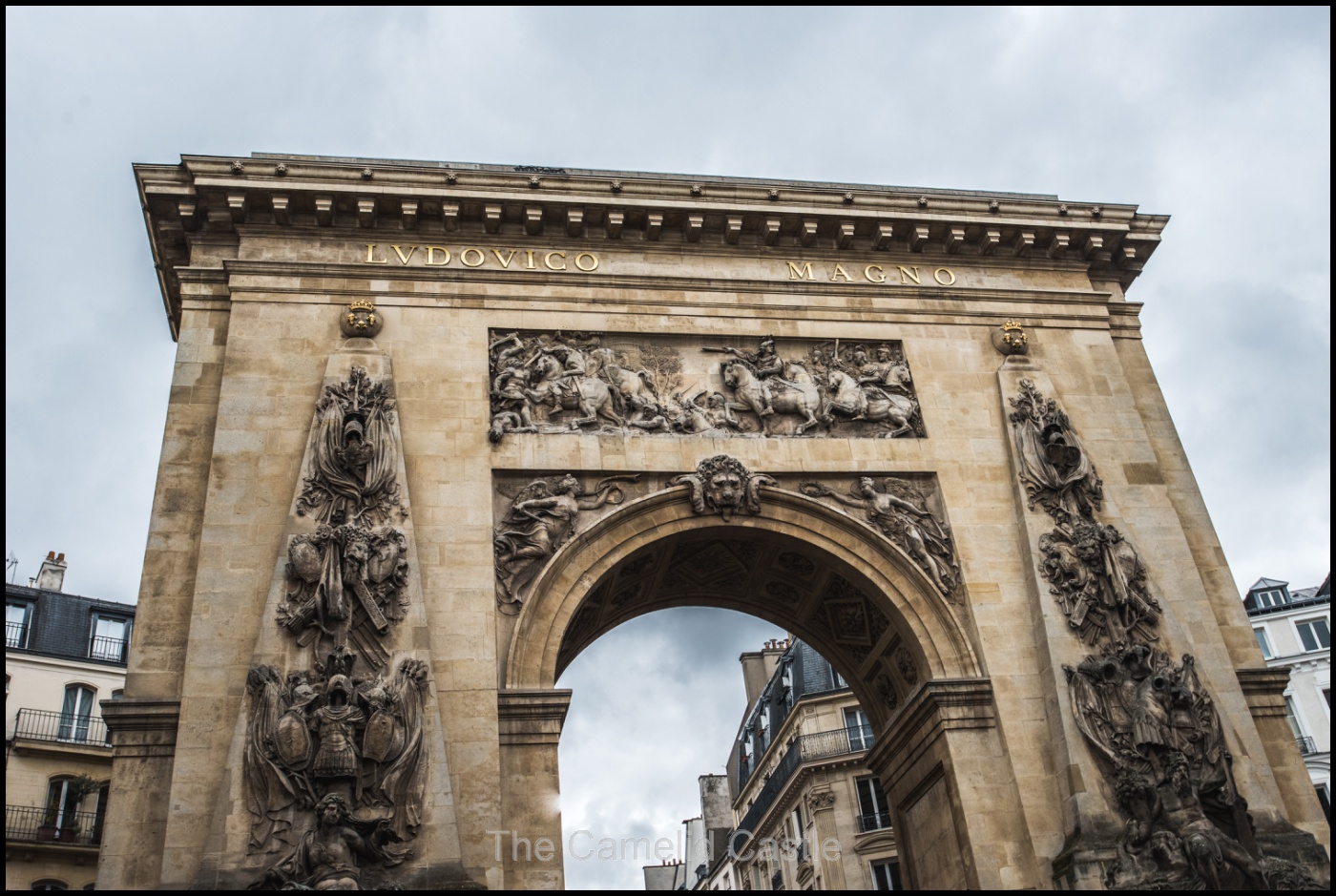 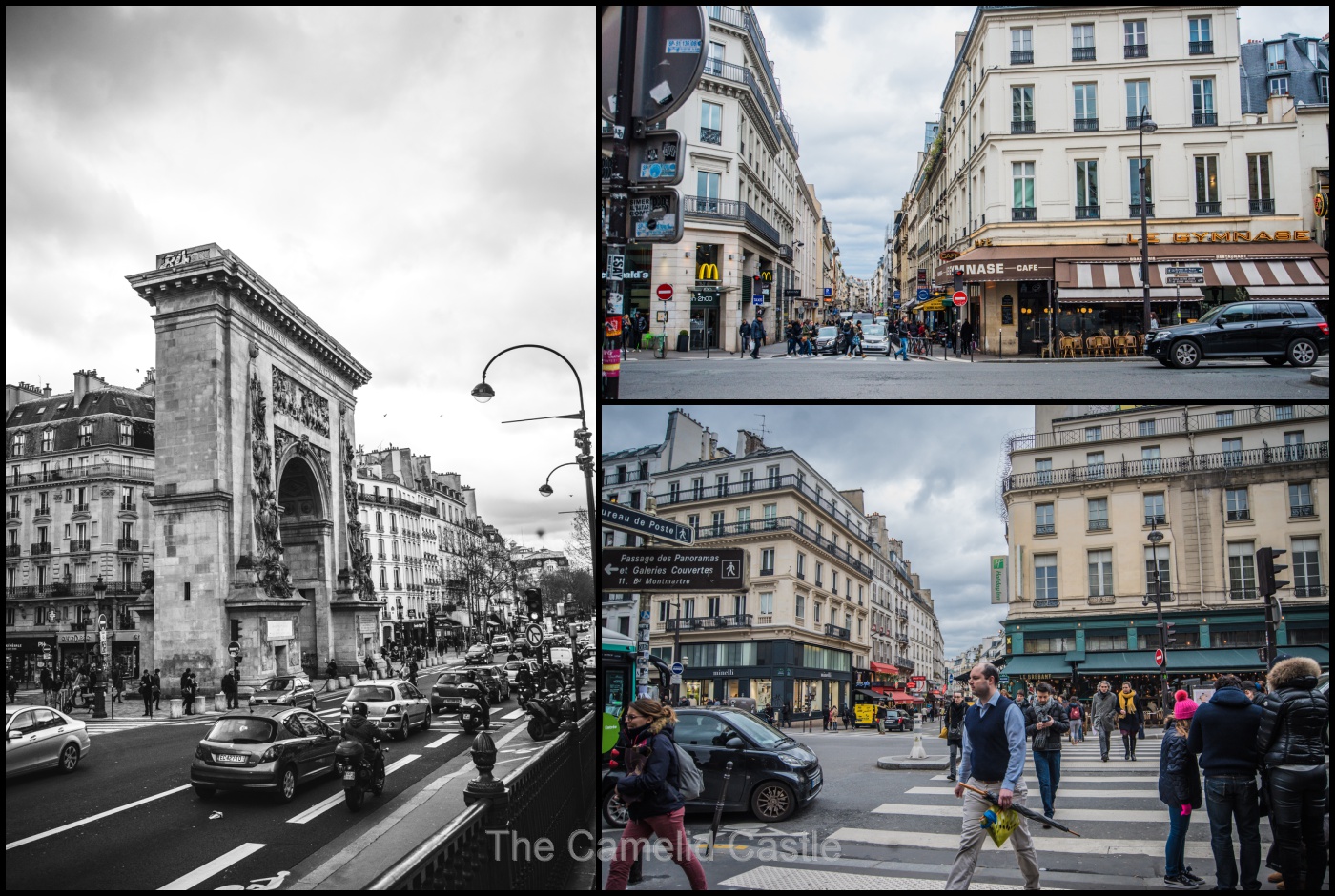 We stopped past a different supermarket near our apartment to pick up some supplies before arriving back in the apartment for a late lunch (now afternoon tea) of bread we’d purchased that morning and was still warm, smelly French cheese and salty French butter. 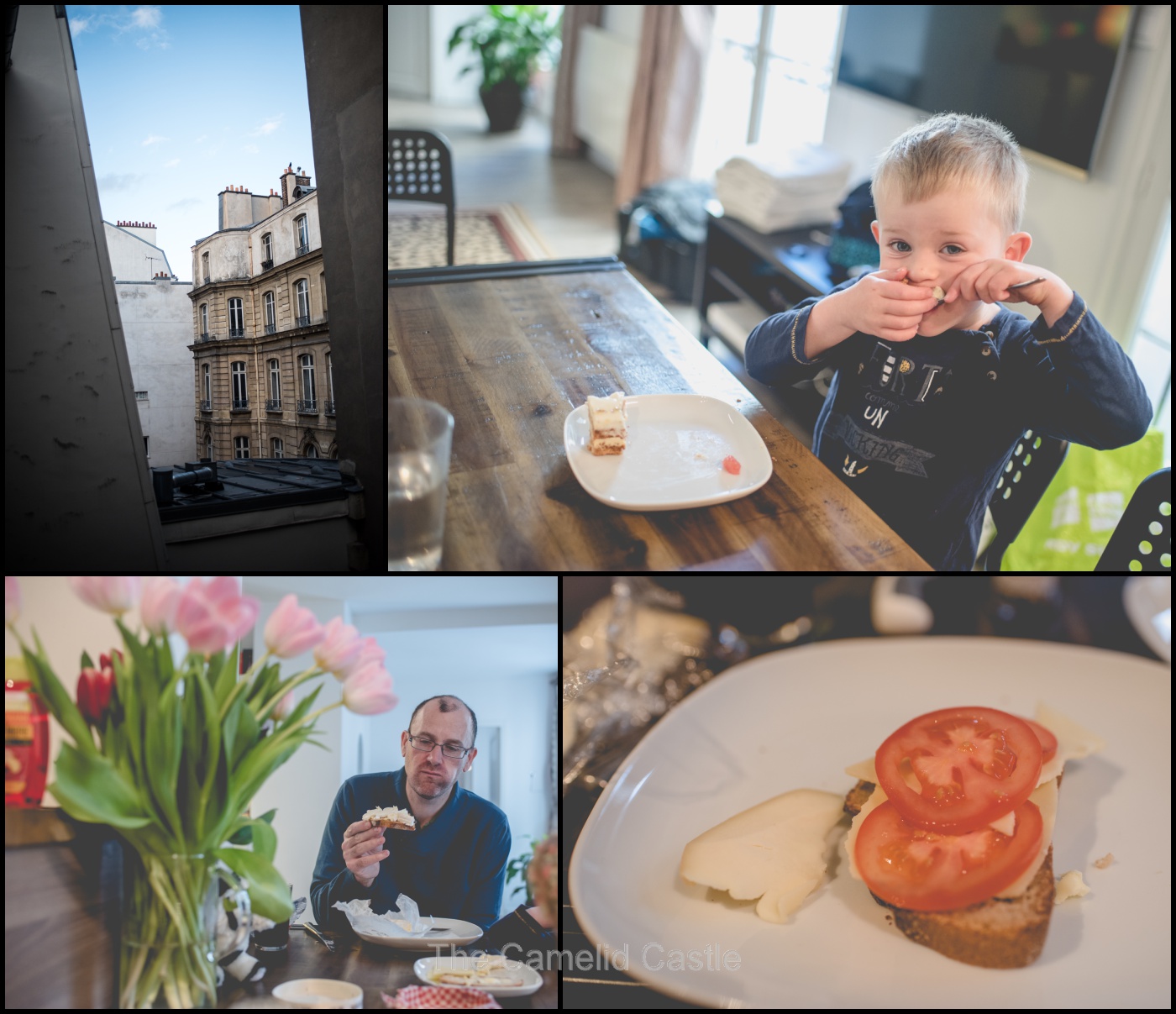 We all needed a quiet afternoon in the warm, so the kids played for a couple of hours while Anto caught up on some work, before a short afternoon jaunt down to a patisserie to purchase dessert.

We then we had dinner of pasta and salad prepared by Anto, followed by our dessert of chocolate eclair, a lina tart and gateau opera – one of our favourites and in honour of our visit to the opera that day!

The kids were tired after a big day, but rather excited about the impending arrival of their Granny.  We’d informed them she was going to land pretty soon and somehow managed to get them off to sleep.  A short time later Anto ventured out to collect Di from the Les Halles train station, as she’d successfully managed to follow our instructions and get from the airport out to Les Halles.  We figured given she had just flown in from India and wasn’t as familiar with Paris as us, we’d better go and collect her and get her (and her luggage) to the apartment via metro.

With Granny successfully installed in the apartment, we stuffed her full of left over Paris pastries and let her catch a few hours sleep to adjust to Paris time before she awoke to excited kids and a day with an awful lot eating as we embarked on a food tour of St Germain.

Daily statistics for Friday the 30th of March, 2018, in Paris France – the temperature range for the day was 4 to 11 degrees with a mean of 8 degrees (although a few degrees less with windchill) and intermittent rain.  The total walking for the day was a decent 12.7km.

Up next, a day of delicious treats as we did a chocolate and pastry walking tour of Saint-Germain-des-Prés and started showed Granny our favourite places in Paris!