Today was our last full day in Paris. So much food and so little time. We decided that we needed to make sure we got some more yummy treats in before we depart. Of course we are only going to Belgium, home of chocolate, waffles and beer, so we aren’t going to starve!

Despite both her parents being up late (yet again), Astrid had a decentish nights sleep and was happier in the morning than her parents were pre-coffee!  We are currently using up items in our fridge and pantry so have run out of a few essential ingredients like pepper. Breakfast was rather salty eggs, but still with nice French butter and bread.

We headed out of the apartment into a cool (OK, pretty cold) Paris morning and walked down to La Conciergerie, which is a former Royal Paris and prison (that housed Marie-Antoinette). During the French Revolution hundreds of prisoners were taken from La Conciergerie to be executed via guillotine at locations around Paris.  La Conciergerie was originally a Medieval Palace and has some impressive guard halls. Kings continued to improve upon the palace until the 14th Century, when Charles V moved across the river to the Louvre. However, the Conciergerie is most famous for being ‘the antechamber to the guillotine’ due to the number of it’s prisoners that were executed during the French Revolution.

The building now houses a museum and many parts of it are used as Paris law courts.  The part that is open to the public had an extensive collection of art, which seemed to include a lot of castles, including castle models (and Lego ones)! They were fun to look at, even though Astrid thought she should be let loose to run around.  Then we toured the display of the prison area which showed the size of the cells and how the cells available to prisoners that could ‘pay’ were larger and more comfortable. Marie Antoinette’s was significantly bigger than those for regular prisoners but still tiny by Versailles palace standards. 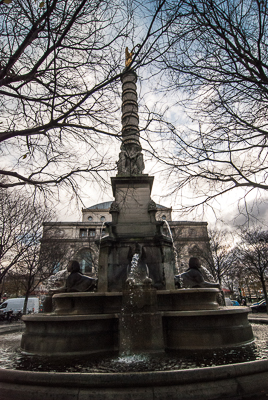 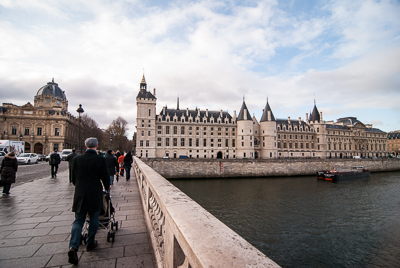 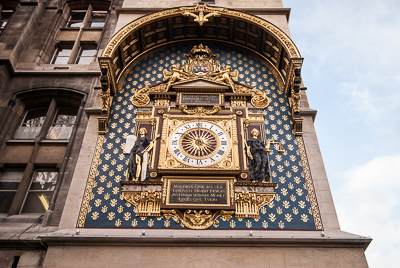 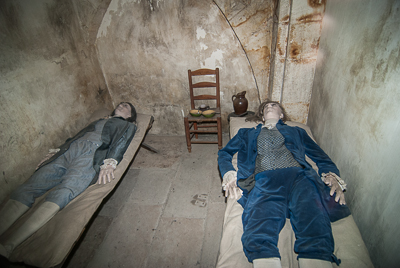 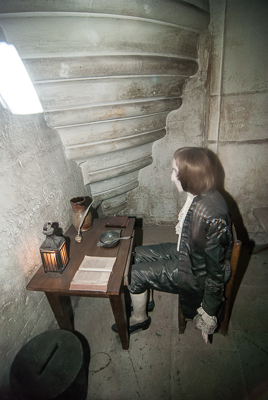 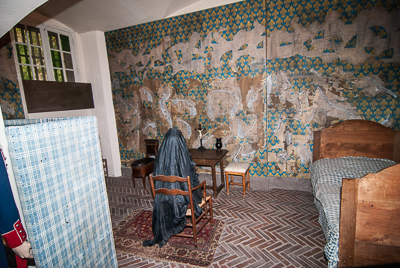 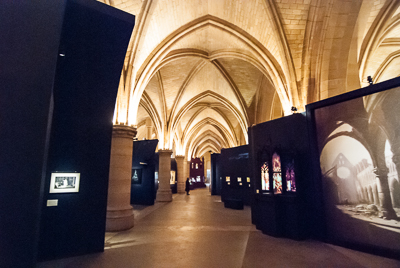 Once we finished at the Conciergerie we headed over to Ile de la Cite for another visit to Berthillon. Astrid was refusing to keep her mittens on and it was very cold. We weren’t inclined to get her her own icecream since she was being rather petulant. In the end we walked briskly, enjoying going over some different bridges and found our desired icecream and grabbed some cones to eat on the run.  I had to go for the salted caramel again but I also tried the pear, so Astrid could have some. She enjoyed the pear until she discovered her dad had dark chocolate and chocolate-orange-praline and decided instead to eat his.  Looking like a chocolate monster, but now keeping her mittens on with the promise of more bites of icecream, we walked back towards our apartment, stopping to admire some more Christmas decorations and savour our last views of an area we have become very familiar with. 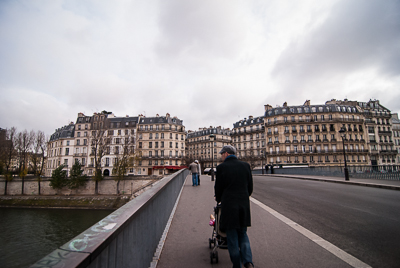 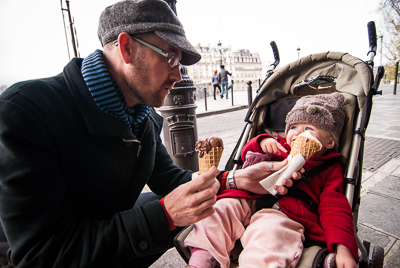 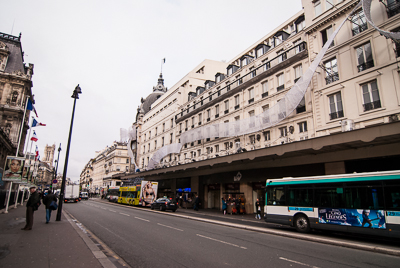 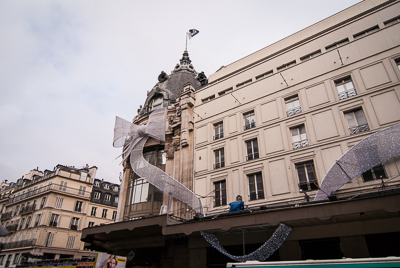 Of course Astrid fell asleep and didn’t want to be woken… again. Annoying, when we wanted her to have a proper sleep today before some hectic days ahead.  We hit our street and collected some fresh bread and today’s patisserie item and woke the sleeping munchkin, hoping she hadn’t slept for too long.

Once back in the warm apartment, and Astrid was again full of bread and cheese, she had a play while her dad was trying to rest but when put down for a sleep she actively resisted sleep for a very long time.  Apparently today we weren’t the winners.  However, while she was thinking about sleeping we ate our last patisserie item from our street, the ideale pistache. We had this one a few weeks back and it was so good that we had to try it again.  Still so many things to try but this one was worthy of a second go. 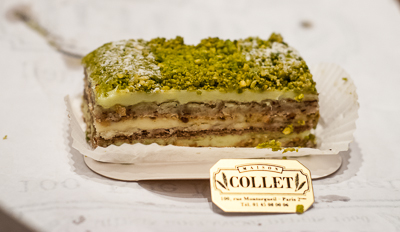 Giving up on the concept of sleep for anyone, we did a bit of tidying for our afternoon rental inspection and headed out for one last walk around Paris. It was still pretty cold but we enjoyed our walk down to the Les Halles shopping centre.  We had a bit of a walk around and made some last minute PJ purchases….. the lingerie and PJs available here are fantastic so had to go back and buy some things for Astrid to put under the Christmas tree for me.  Of course she flirted outrageously with a group of young people shopping in the store and then found the stuffed cat and dog PJ holders and tried to escape with about 30 of them. They were very cute (and not expensive) but we are already carting a heap of her toys around that we forgot to include in the luggage for London so she was out of luck today! 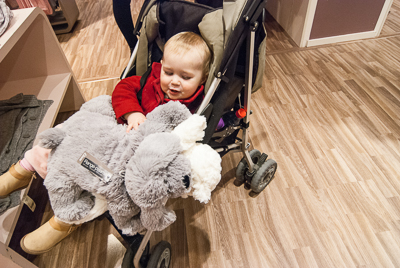 We headed back out and decided not to go to the park as it was too darn cold (mostly for us, as we didn’t want to stand around in the cold).  Instead we took Astrid out for crepes……… Yes more food! We were cramming it all in today.  We went to a crepe place not too far from our apartment (well the other end of the adjoining street), we have had lovely icecream there before.  Normally we get take away but today we decided to sit and eat at the cafe, since it was our last chance. Take away is always much cheaper and usually our preferred option but it was nice sitting out on the street, watching the Christmas lights come on, being warmed by the heaters and eating our freshly cooked crepes. I had sugar and Grand Marnier (Astrid did not get to try this). Luckily for her Anto had nutella and banana. She is still a fan of crepe! We  then wandered back up our street, bidding farewell to many of the lovely and yummy shops. 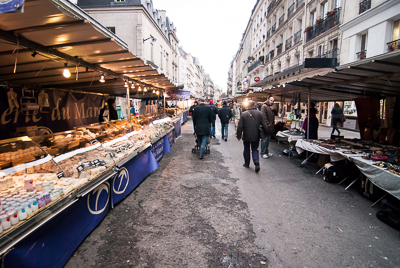 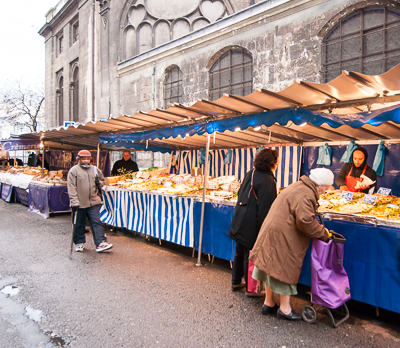 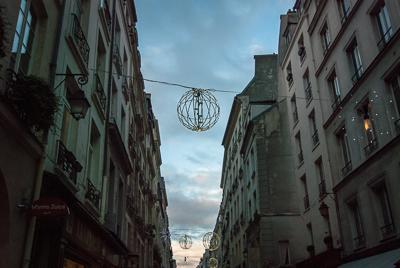 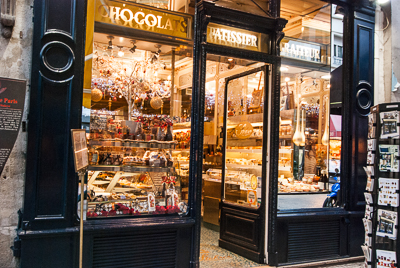 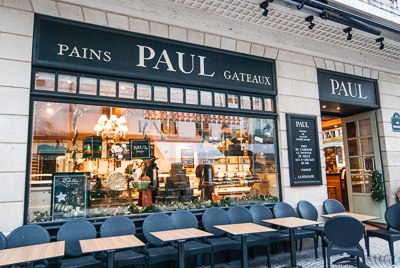 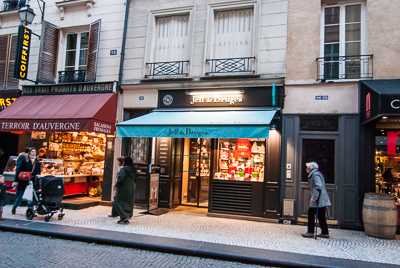 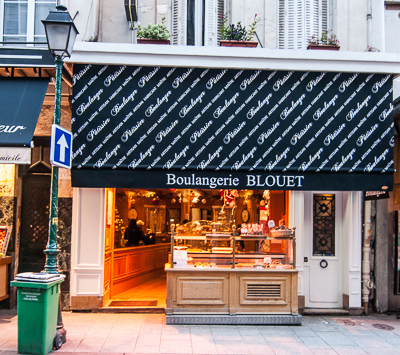 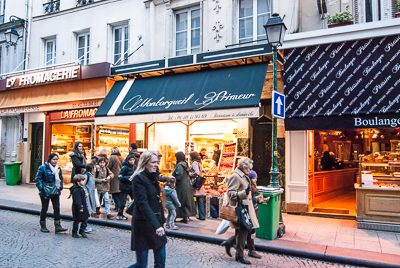 While we will miss our many patisseries, fromageries, boulangeries and other assorted shops on our street. We will not miss our staircase up to our apartment. Two flights of twisty, worn stairs. Not so bad except when trooping up and down with luggage and babies who are getting bigger by the second! 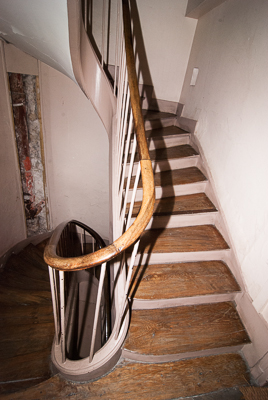 On the way back we grabbed last minute dinner groceries and headed back upstairs in time for our inspection. Keen to get Astrid fed and to bed at a decent hour we were annoyed by their lack of promptness. They were ‘supposed’ to be here at 5pm. At 5.20pm we started making Astrid’s dinner.  This kind of thing wouldn’t happen in Switzerland…..  Post-dinner we decided to just go ahead with showers and bedtime as we had last minute washing that needed doing.  At almost 6.30pm the Real Estate agent informed us the agent had gone home and wouldn’t be coming. So typically French and very annoying!

Astrid was relegated to bed so we could finish our packing and cleaning and enjoy our last bit of French dessert.  Tonight we had located the really nice supermarket creme brulees again (the ones that are better than most restaurant ones).  We really didn’t need any more food but it was the last day in Paris, so we figured why not spend it eating!