Our night in Melbourne was relatively uneventful. Aside from our hotel being very noisy (main road and thin walls) we all slept fairly well.  Although we had breakfast supplies with us, we planned to go out for a big breaky before our morning of driving.  The previous night Anto had found a nearby cafe so we headed that way a bit after 7.30am.  Of course we got rained on in the 5 minute walk and then found the cafe was closed, with no sign of imminent opening.  Luckily we happened to notice some serviced apartments that we had stayed in on a trip to Melbourne 6 years earlier. They were only about 2 blocks from where we were now staying.  We also remembered that there were cafes near the tram stop closes to those apartments.  Five minutes later and we found the same cafe we had eaten in six years earlier.  The food was still pretty good, although the crowd (and staff) seemed significantly more hipster than in 2008. Astrid and Soren managed to charm the cafe patrons as usual, and thoroughly enjoyed their breakfast.

Once we headed out of the cafe, we headed back ‘the quick way’ and found that the cafe was almost directly opposite our hotel but one street over.  Oh well, we managed to stretch our legs before the mornings car trip.

Back to the hotel and we got packed up while trying to entertain a grumpy Soren.  A bit after 9am we were ready to hit the road and again Soren was asleep in the car before Anto was even out of the carpark.  The plan for the morning was to cover around 200km, heading North West to Denison to visit Anto’s Uncle Peter and Aunt Jenny.  They run a dairy farm and Astrid was excited to see their cows, and other assorted animals.

Aside from the first 20 minutes of driving to get onto the freeway, the rest of the drive was very uneventful.  Astrid was happily watching her TV shows and Soren was napping.  We made it all the way to Traralgon before he woke up, and from there it was only a short hop to the farm.

Astrid and Soren were very excited to be released from the car and to explore their surroundings.  After a drink and a chat we donned the gum boots and headed out to the muddy paddocks to visit the cows.  Astrid loved chasing the calves, and then talking to the herd of cows (who thought that they should be getting more food out of us). 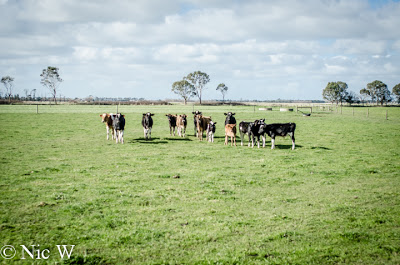 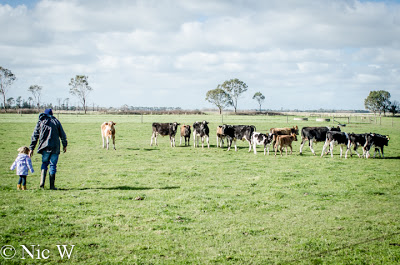 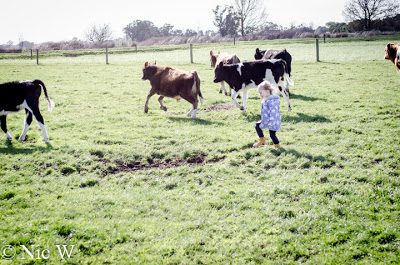 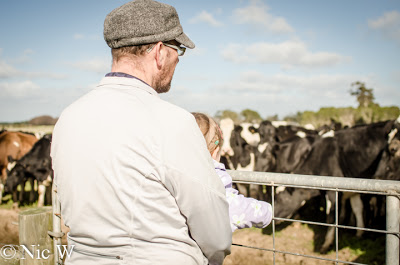 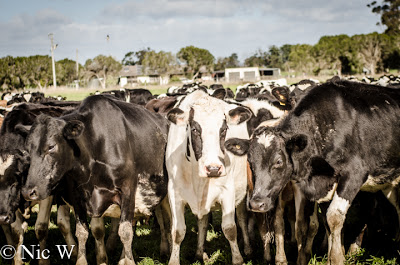 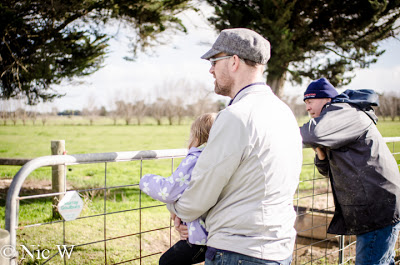 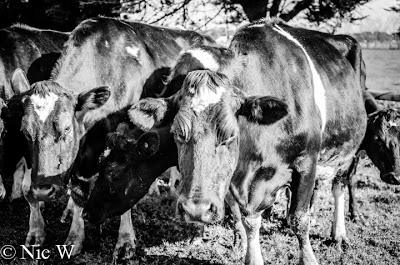 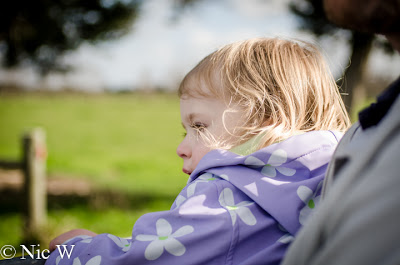 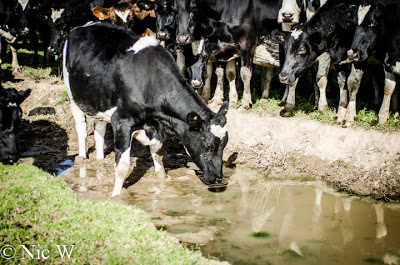 After communing with the cows it was time to go and meet the pet goat.  The goat thought Astrid was fun to play with, unfortunately the goat was bigger! 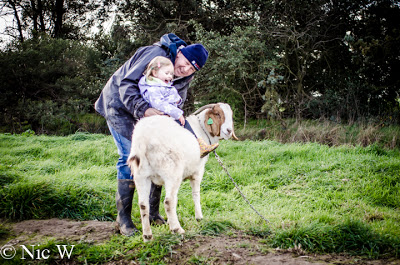 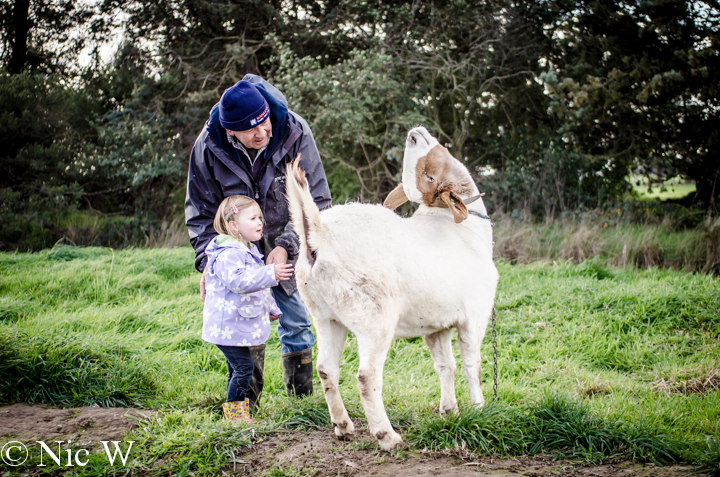 Even better than goats and cows was a ride on the motorbike around the house…… what cows? Now there were motorbikes! 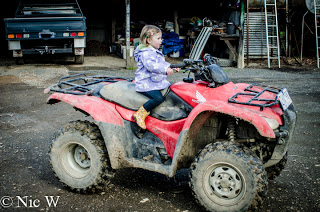 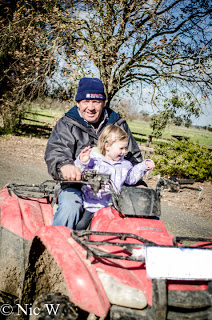 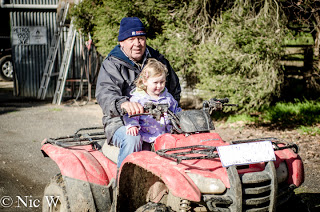 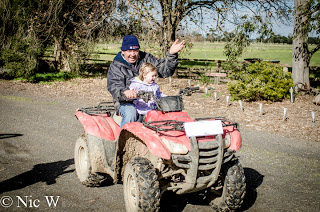 Peter and Jenny took us to their neighbours house to meet their chooks. Very pretty show chooks who were being washed and blow dried for a show. The were indeed attractive chooks! They also had some cute cows……. Astrid was again impressed, until she spied another motorbike! 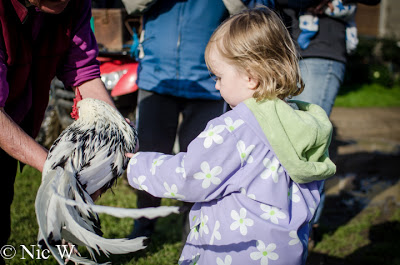 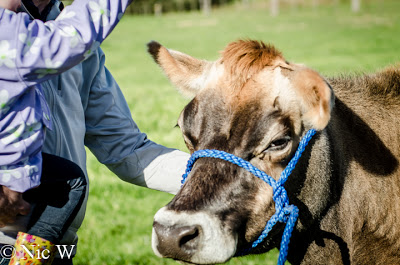 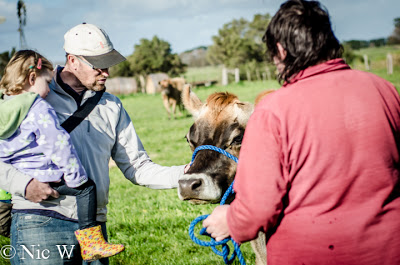 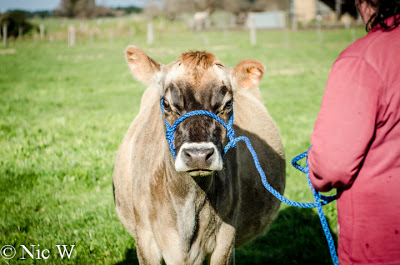 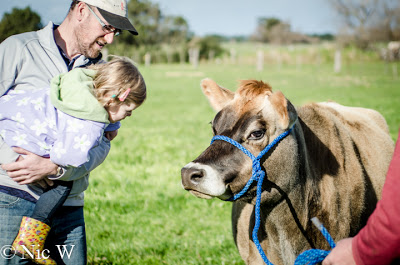 After a play with the animals, some lunch and a tour of the neighbourhood we had to bid farewell so we could head off to Bairnsdale.  We all enjoyed the catch-up and visit to the farm, and Peter and Jenny got to see a more grown-up Astrid and to finally meet Soren.

We headed off around 3pm and Soren was well and truly ready for his afternoon nap and slept all the way to Bairnsdale.  We were spending the night at Anto’s aunt Sue’s place.  We arrived just after 4 and 20 seconds before Sue made it home from work, and 5 minutes before Anto’s aunt Jen arrived from Melbourne. Sue and Jen also hadn’t seen Astrid since she was little or met Soren, so it was a big day for rellie introductions!

Much to Astrid’s delight Sue has horses, so she got to feed the horses and say hello to them.  As if horses weren’t enough, Sue’s son Brenton arrived with his very cute dog Gus and puppy Louis.  It was doggy overload.  They were a little excitable for Astrid’s liking but she did get some pats and they were extremely adorable. 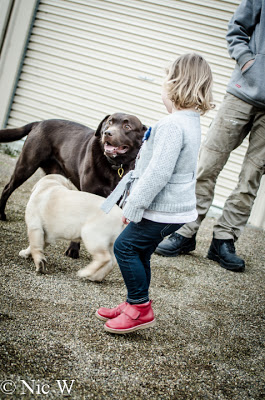 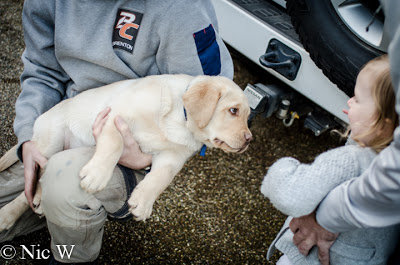 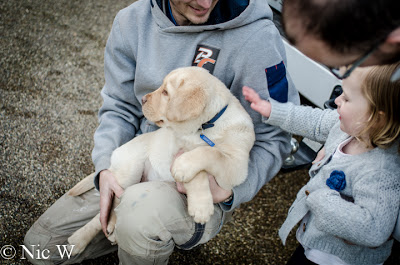 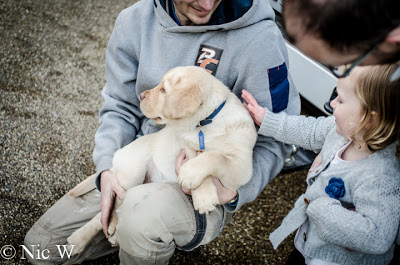 After a big day of animals and driving the kids were bathed, fed and in bed at a decent hour, leaving time for the adults to eat in peace and catch-up.  We did all manage a fairly early night though, ready for the trip home in the morning.

The plan was to make a hasty exit when the kids woke up.  Astrid managed to be awake at 6am so we had a quick breaky, fed Soren, packed, farewelled and were on the road a bit after 7.  It’s about 6 hours from Bairnsdale to home, with only a few decent stopping places.  We figured Soren would be awake for awhile so we could drive for an hour and stop and get coffee in Orbost and let the kids have a break from the car.  Of course he fell asleep after 40 minutes in the car so we had to forgo the coffee idea and kept driving. Astrid was being well behaved, enjoying her last day with free reign on the car DVD player……..

With Soren still asleep 10km out of Cann River we were debating whether we could keep on driving and stop in Bombala.  Astrid then decided to win the award for the most random tantrum of the trip.  With no warning she started screaming from the back seat ‘let me out of this car NOW, I want to stop right here.’ This of course woke Soren up and the tantrum kept going until we pointed out that there was other 4 hours of driving left and we were in the middle of a forest so it wasn’t a good idea to stop.  With a cranky 3 year old and an awake baby we figured we should stop in Cann River for food, leg stretching and a bathroom break.

Cann River never fails to underwhelm us and this visit was no different. Some very average coffee, and a croissant so bad that even the food monsters Astrid and Soren wouldn’t finish it.  Still, we had a break and it was time to hit the road.  Nic got to spend the next part of the trip in the back entertaining two tired kids.  We tried to convince both of them of the merits of having some sleep.  After an hour or so, just before we reached Bombala, Astrid gave in and Soren followed not long after.

With the adults rejoicing at some peace and quiet we settled in and tried to get some driving done while they napped.  Then something weird happened.  About 5km out of Bombala we started seeing chunks of ice on the road. Then there was snow in the distance. Then snow next to the road…….. pretty soon we were driving along surrounded by snow. Snow piled up on the side of the roads. Farm houses with snow thick on their roofs.  Sheep grazing in white fields.  It was completely surreal.

Cars were pulling off the road and kids were playing in paddocks off the highway and snow men were appearing everywhere.  It was after 11am and there was quite thick snow everywhere, it must have been more impressive earlier in the day.  We seriously debated waking Astrid and letting her play but with another 2.5 hours of driving we weren’t sure that was a good idea.  The camera gear was also in the boot, so we had to make do with photos of the snow with a our point and shoot, while driving.  The kids always go to sleep at the wrong moment! As we drove through Nimmatabel the snow was piled up in the streets, but Astrid and Soren kept on sleeping.  We knew Astrid would not be impressed if she realised what she was missing. 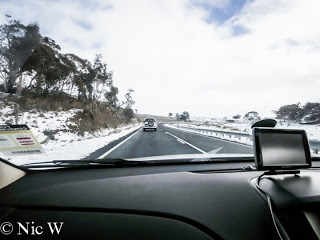 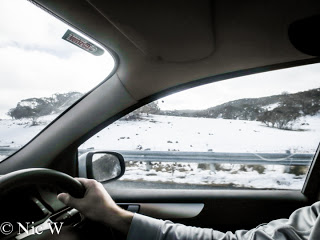 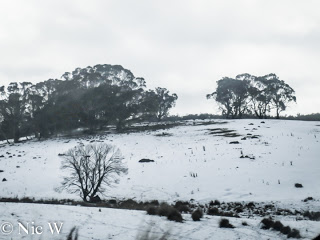 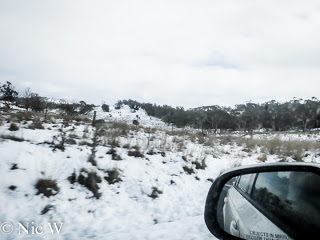 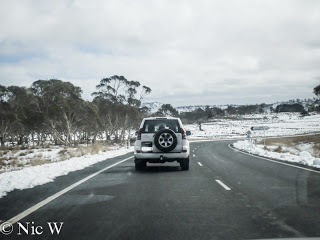 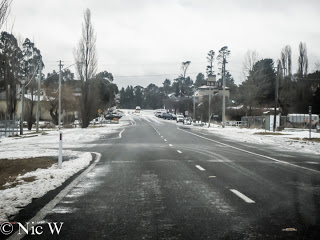 About 10km out from Cooma the snow started to disappear. The kids had missed their chance.  We did briefly consider continuing to drive and hoping we made it home before world war 3 broke out in the back seat but decided that we needed a break and everyone needed feeding. Soren woke up as we reached Cooma so we figured McDonald’s was a safe bet. Us and half of Canberra heading to and from the snow…… the place was packed.  We often go to McDonald’s when travelling for coffee/drinks/toilets and occasionally food.  Usually there is something acceptable at the McCafe. This time there were no options except cakes or the usual burgers. We gave in and let the kids share a cheeseburger.  Astrid had gotten to 3 without having a McDonald’s burger, Soren got one the same day at 9 months.  Astrid was very unfussed by hers and mostly wanted to play in the playground, Soren demolished his as we got disapproving looks from nearby parents. Nic couldn’t find anything vegetarian except cake, so had an iced frappe. Such a healthy lunch for all imvolved!

We eventually dragged Astrid away from the playground, with tears, but avoiding a full tantrum.  The homeward stretch awaited. The kids tolerated the last hour and 20 minutes fairly well, although we were all pleased to see the Brindabellas and know we were almost home.  We made it home right on 2pm, and found Mikl and the animals all alive and well, inside in the warm.

Aside from the inevitable unpacking and large pile of washing, that ended our Great Ocean Road adventure.  We had a good trip, survived 10 days in the car with 2 small kids, returned Trevor’s car unscathed (it didn’t even smell of vomit) and had plenty of good memories and lots of awesome photos.  Astrid spent the afternoon telling us how glad she was to be home with all her animals and things, and her own bed. She did spend the next few days though playing ‘holidays’………..

One thought on “The Victorian Road Trip Part 7 – the trip home… via cows and snow!”