Our Sunday in Copenhagen was filled with a boat tour of the city, Christmas markets, a visit to a very round tower and lots and lots of food! 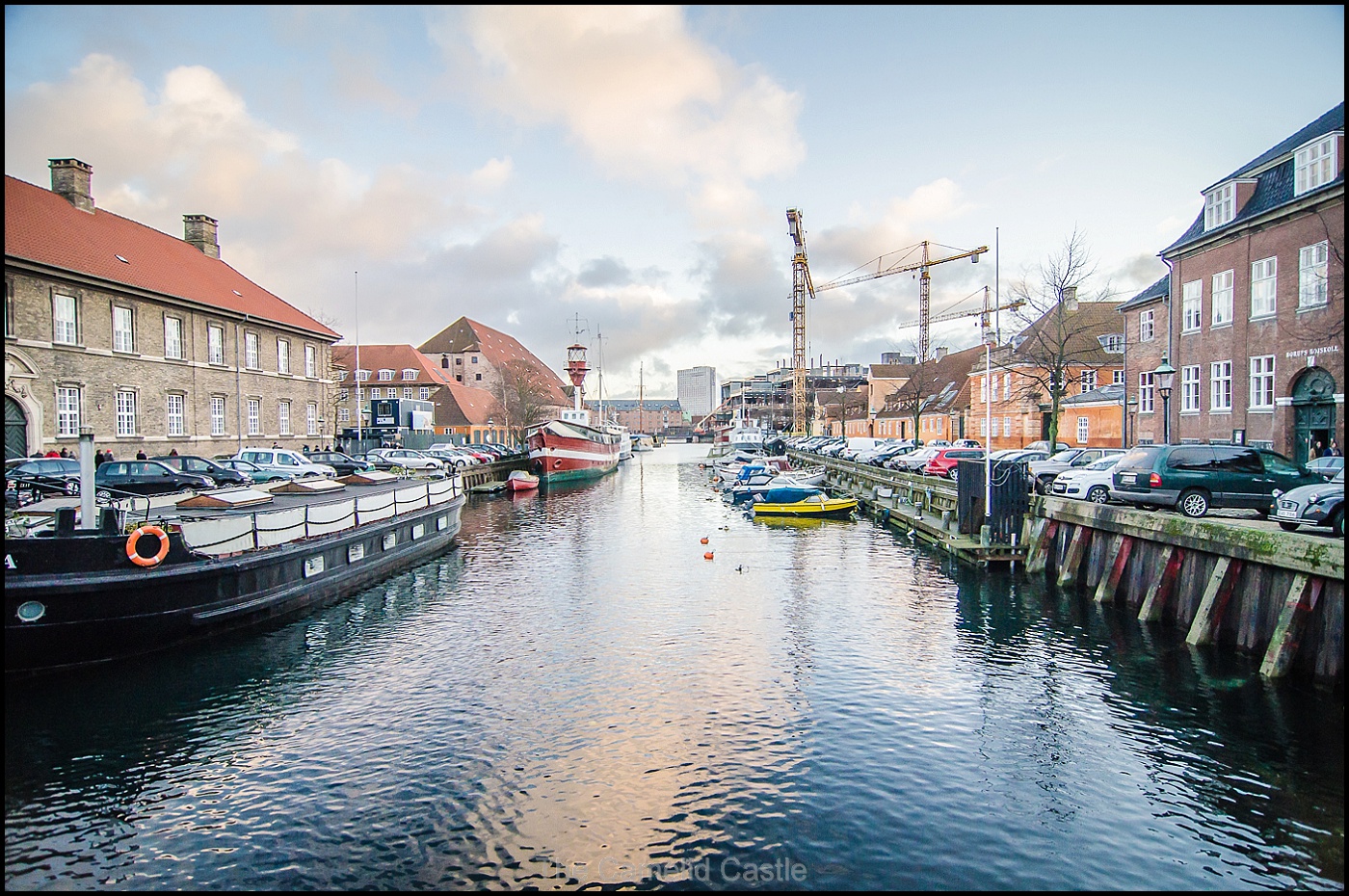 We started the day fairly early, but not ridiculously so.  Well at least not the kids, some of the adults were still struggling with the time change but I was pretty right except for the occasional kid related wake up.

We had decided the plan for our Sunday was to do the canal tour of the city, starting from Gammel strand.  This was included on our Copenhagen cards, so we figured it was a good way to do some more easy sightseeing. The first boat of the day left at 9.30am, so we aimed to be on that one. It turned out to be a good move.  We made the now familiar journey into the city via the walk to the local train station and a train to central. It was then a 1.3km walk to Gammel Strand.  It was another cool day but the sun was shining for the second day in a row and we enjoyed walking past the colourful buildings. 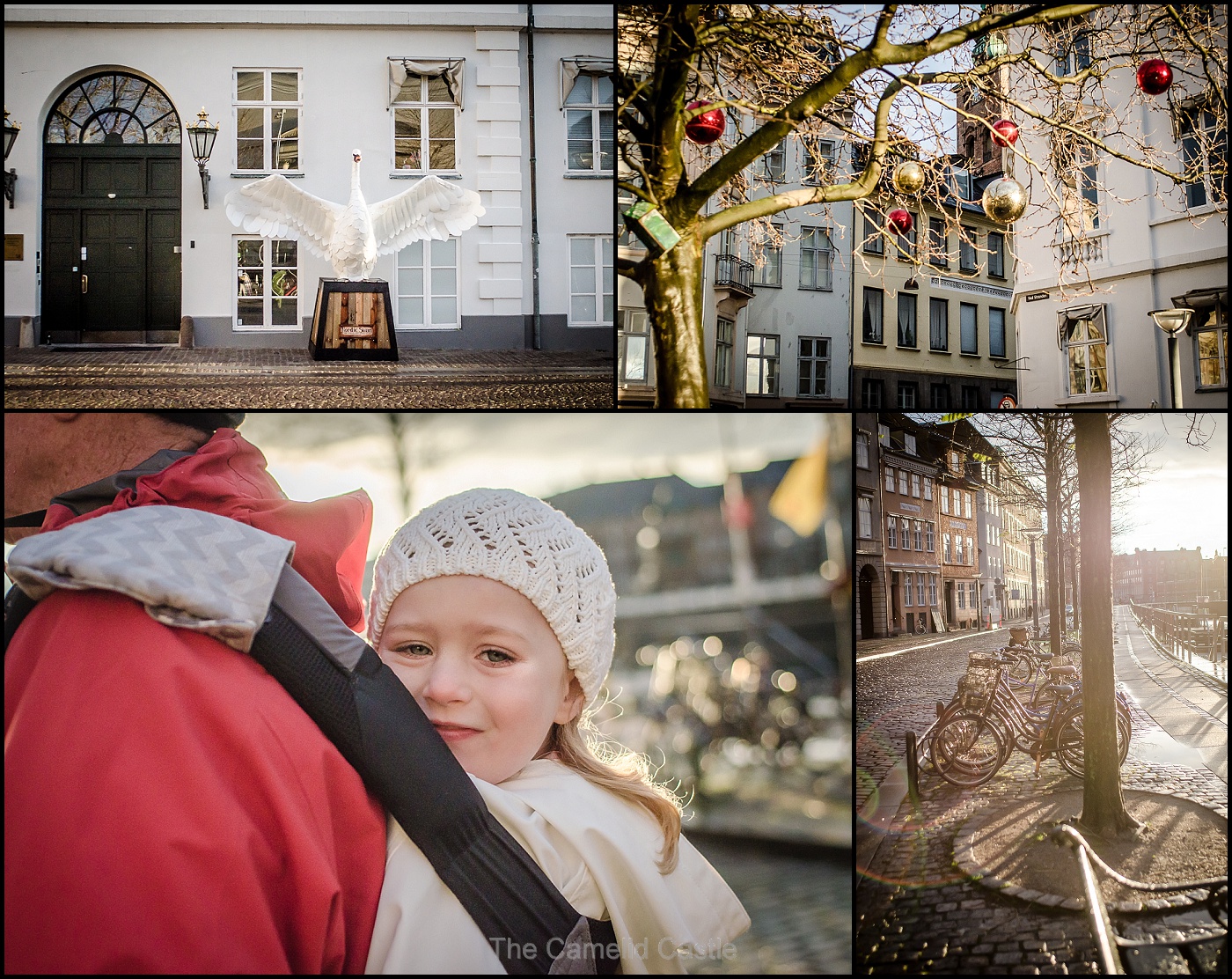 Once we arrived at the boat departure point we grabbed our tickets and hopped on board. It was relatively quiet first thing in the morning. We decided to sit inside in the warm and the kids were excited to get the boat ride underway. Soren had spied the boats the previous day (while we were out riding) and had been shouting about ‘more boats’ ever since. 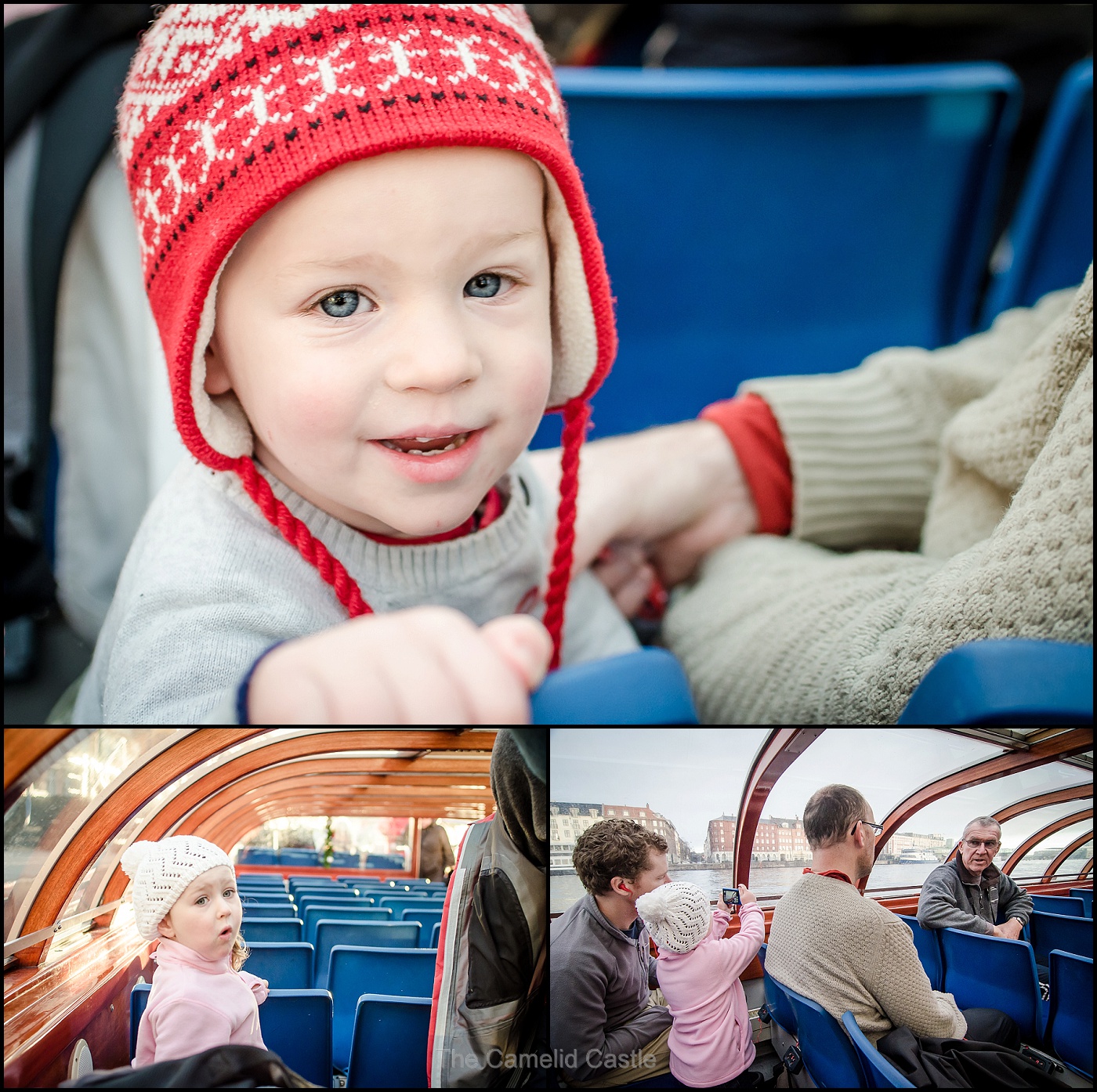 We sat up the back of the boat and had plenty of room to move around and look at the sights as the boat wound its way around the canals and waterways of Copenhagen. Astrid was enjoying looking at all the colourful buildings. It is a bit of a different view from the water, to what we had seen the previous day on the bike.

The first bit of tour was through the waterways from Gammel Strand through to Nyhavn.  The sun was starting to shine and we got some lovely views. 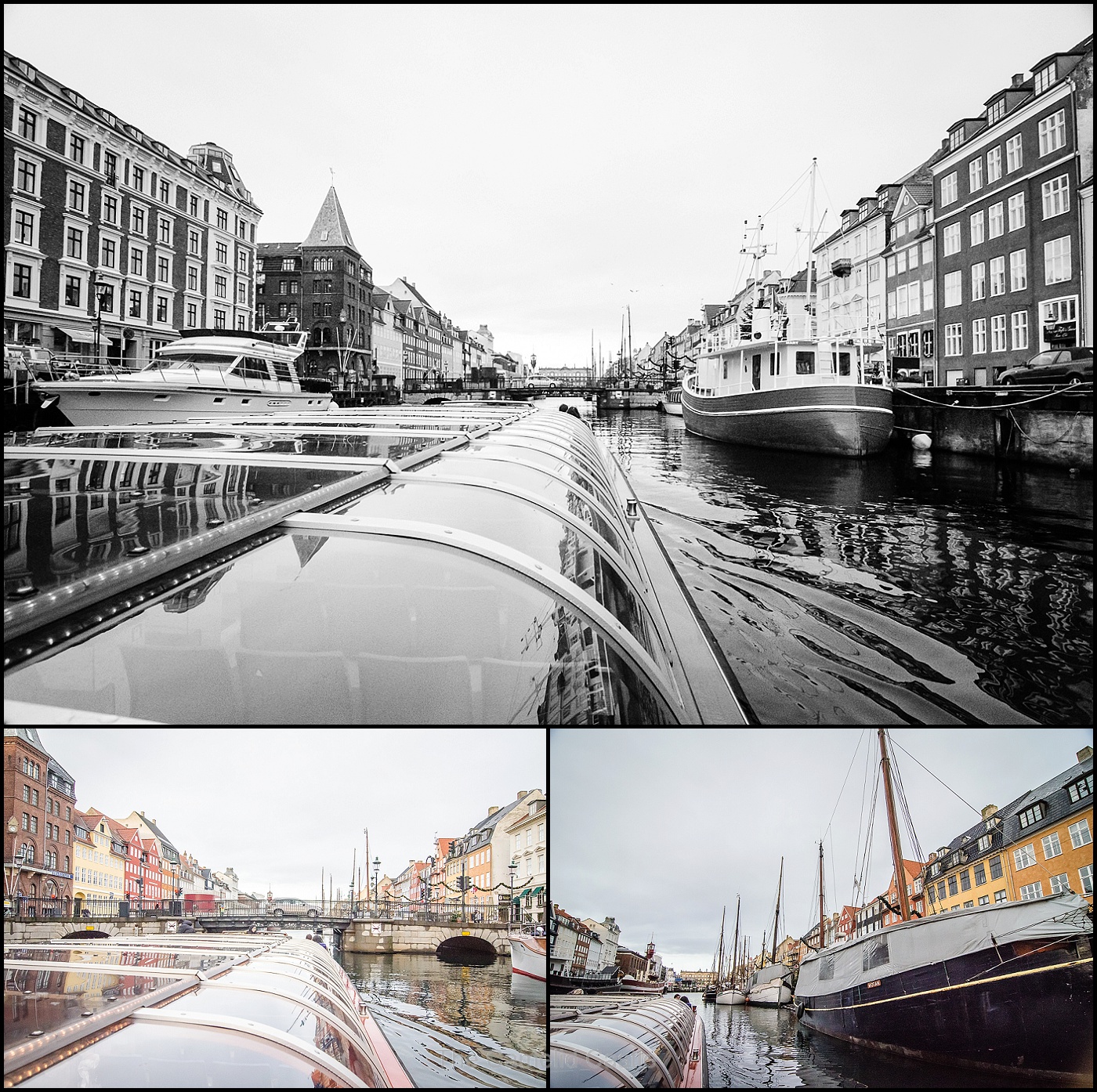 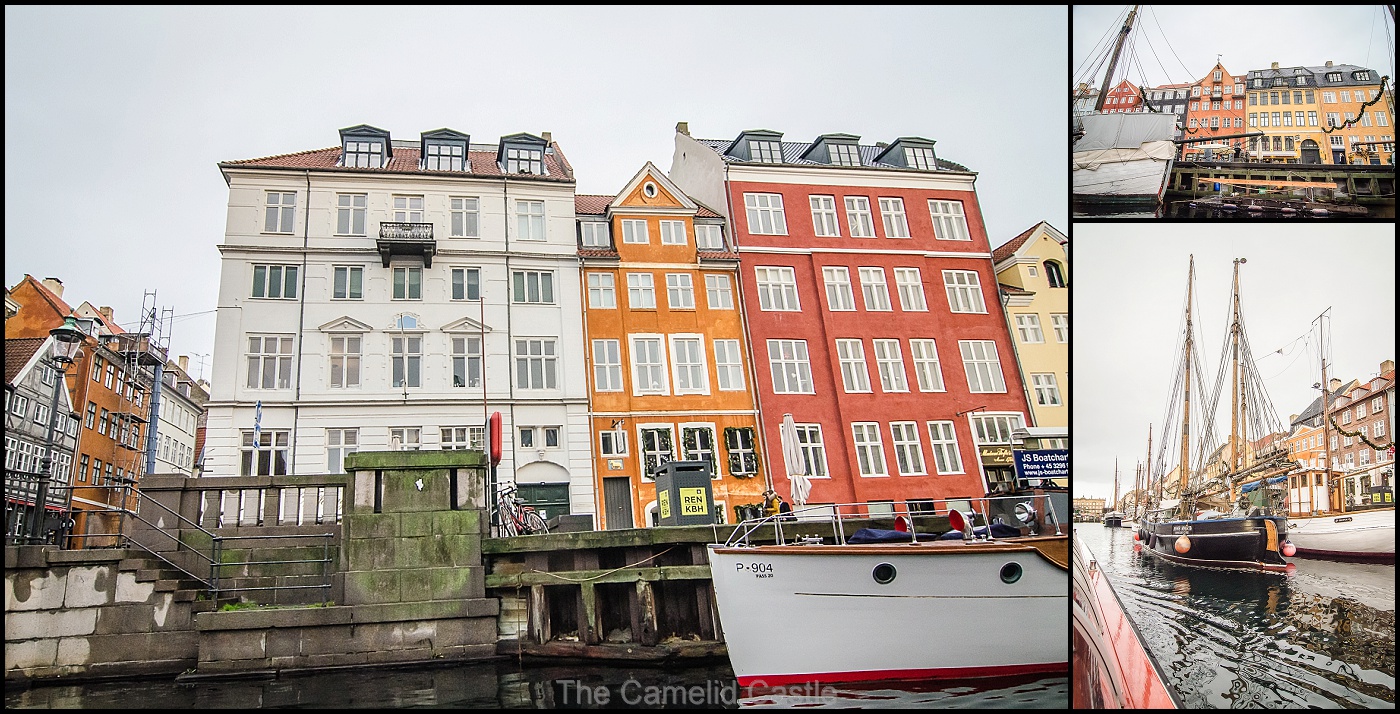 We certainly got some more picturesque views of Nyhavn as we sailed by.  The second pick-up point for the tour was Nyhavn and this was where our nice quiet tour turned busy.  There were still plenty of seats, but it was significantly more crowded.  The back viewing area of the boat (which I had been using to take photos) was getting pretty packed.  It was also pretty nippy out there so the number of photos on the second half of the tour was less than the first!

We headed out into the bay and past the experimentarium and the opera house, and got a different view to the previous day. We also did the obligatory stop at the little mermaid, but didn’t bother getting off this time to take photos.

By about an hour into the tour Soren was getting a little over it and even snacks weren’t keeping him distracted.  We had originally thought the tour was 40 mins. It turned out it was 40 mins of actual boat tour and lots of stops along the way (including a 15 minute one in Nyhavn to let passengers on and off).

One of the more amusing parts of the tour was the series of low bridges we went under. Most were just barely above the boat level and if you are standing on the back deck you will get your head knocked off. The poor boat tour guide was repeatedly warning people every time we came to a low bridge but many completely ignored her (repeatedly) and had to be dragged down by other people. The best one was the people letting their kids stand on the seats as the boats were about to go through the low tunnels.  Going through all the small tunnels was part interesting and part terrifying. 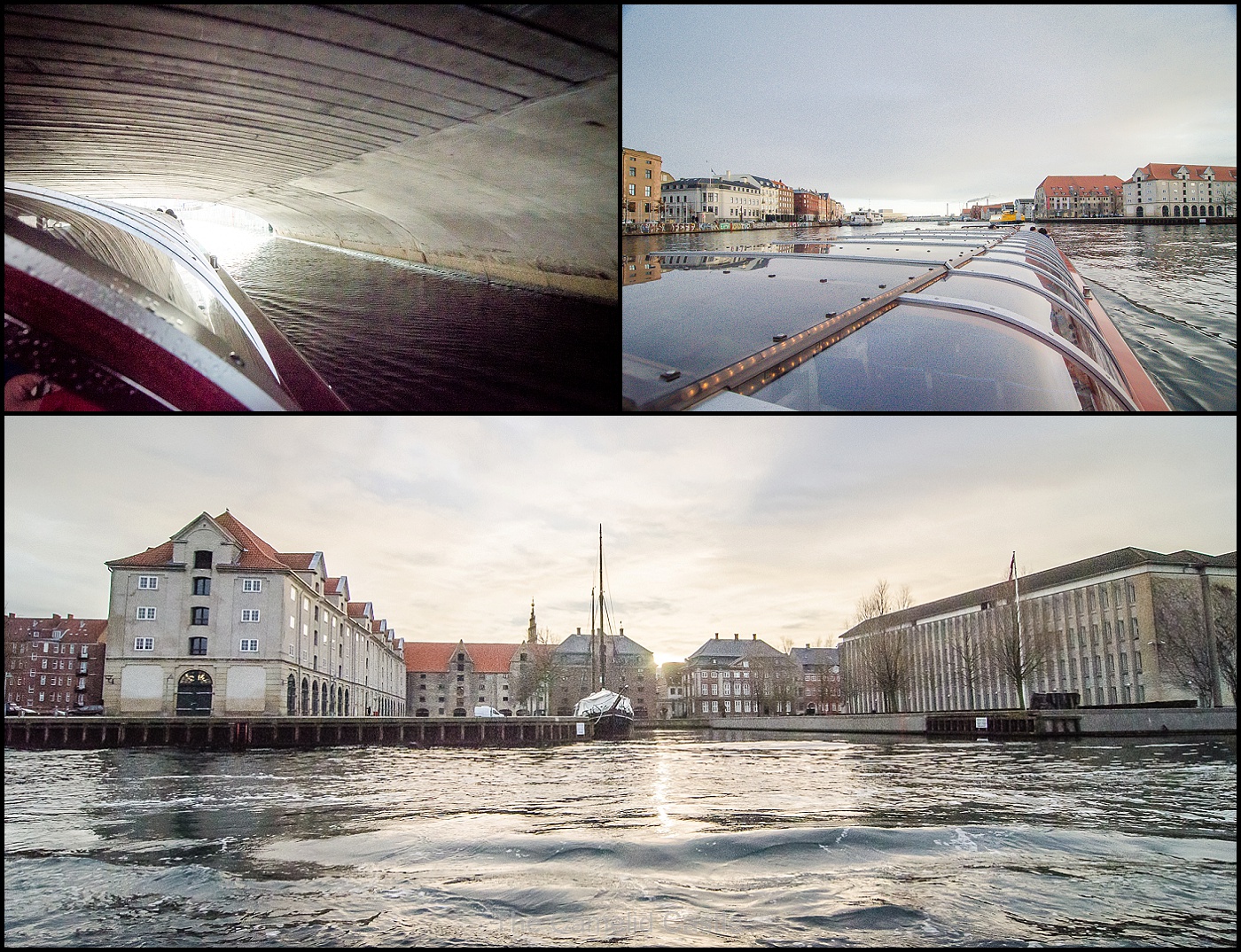 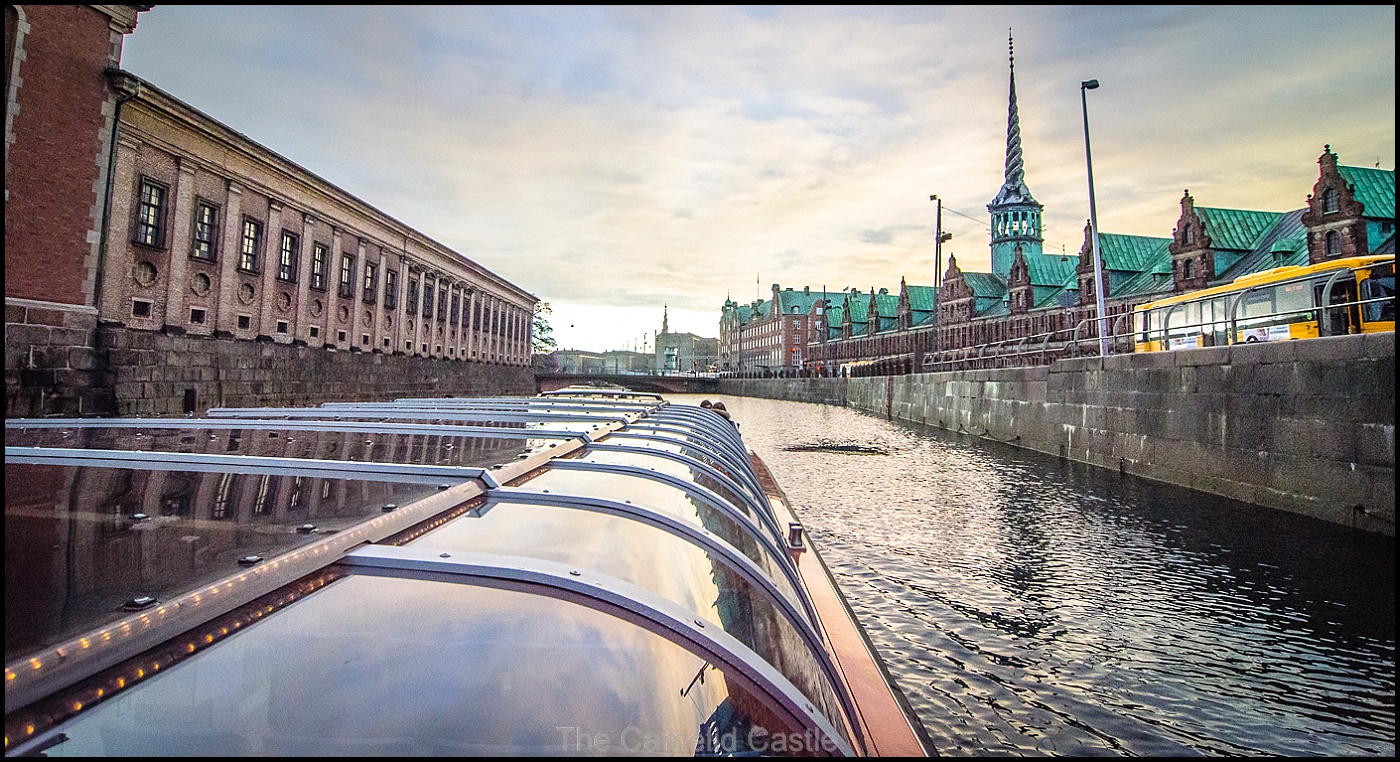 We ended up back at our starting point (Gammel Strand) after 1 hour 20 mins and had enjoyed the scenery but were ready to get off and walk around. The inside of the boat was nicely heated by sitting still and people opening the doors constantly meant that we all got a little cold.  Alan and I had been up the back taking photos for part of the tour but it was definitely easier in the first half with less people.  As we docked the line for the next tour was very long.  We were immensely glad we did the first tour of the day.  The boat tour was included on the Copenhagen card and is definitely worth doing to get a good overview of Copenhagen’s famous sights from the water.

Once off the boat we decided to go for a stroll to the Rundetaarn (the round tower), a 17th Century tower built in central Copenhagen by Christian IV. It was originally built as an astronomical observatory but is best known for it’s equestrian staircase (wide gently sloping staircase that horses can use). The tower is 42m tall and both quite impressive and fun to climb. 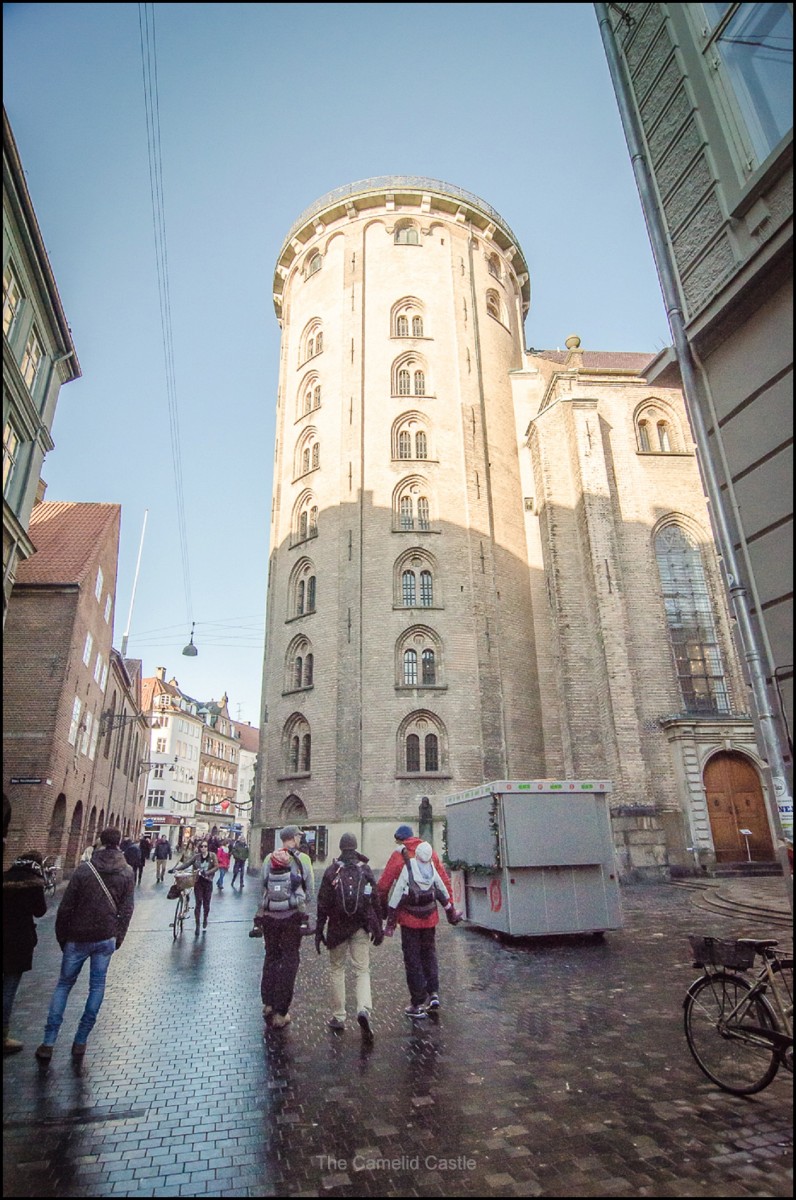 It was a pretty easy walk gently curving upwards through the tower (until the top couple of flights of stairs at least). The views out the windows were pretty.

There were also some large galleries off the side of the tower that were fun to look through. They were also heated and had nice toilets!

Once were at the top, and past the couple of flights of stairs the views from the top, across Copenhagen were nice. It looks quite different from above than when walking, riding or sailing through the streets and canals.

The Rundetaarn is also included on the Copenhagen card. There are many towers and buildings to climb in Copenhagen for views but this is a good one to do if you have kids and don’t want too many stairs!

While walking to the docking point for the boat tour we had spied a Christmas market. Having not had success with Christmas markets the previous night at Tivoli (they were there but it was way too busy to look), we decided to go off schedule and spend some time at the Gammel Strand markets.

The streets between the markets and the Rundetaarn were certainly looking festive and the markets were just opening up for the day and it was all very festive with a chill in the air and the smells of food cooking away, buskers out singing and the Sunday crowds milling around. There were even some horses out the front of the markets (pulling a carriage) that the kids thought were fabulous to say hello to. 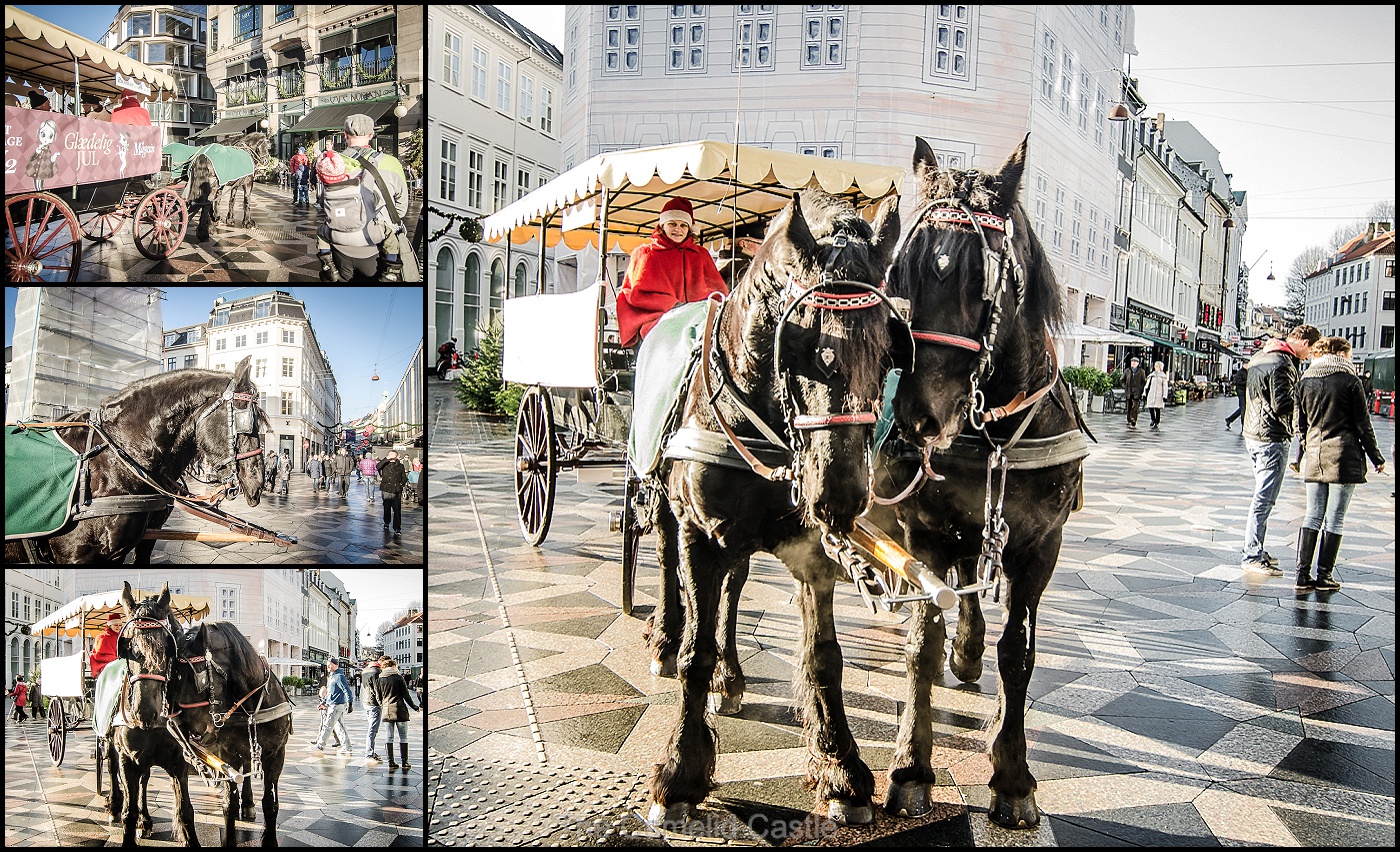 It was approaching lunch time so we thought we would wander the markets and see what was on offer for lunch.  There was certainly an array of different foods – roasted nuts, fudges, chocolates, pastries, crepes and many varieties of sausages.  We also spied several hot drinks – hot chocolate, gluhwein and gloog. 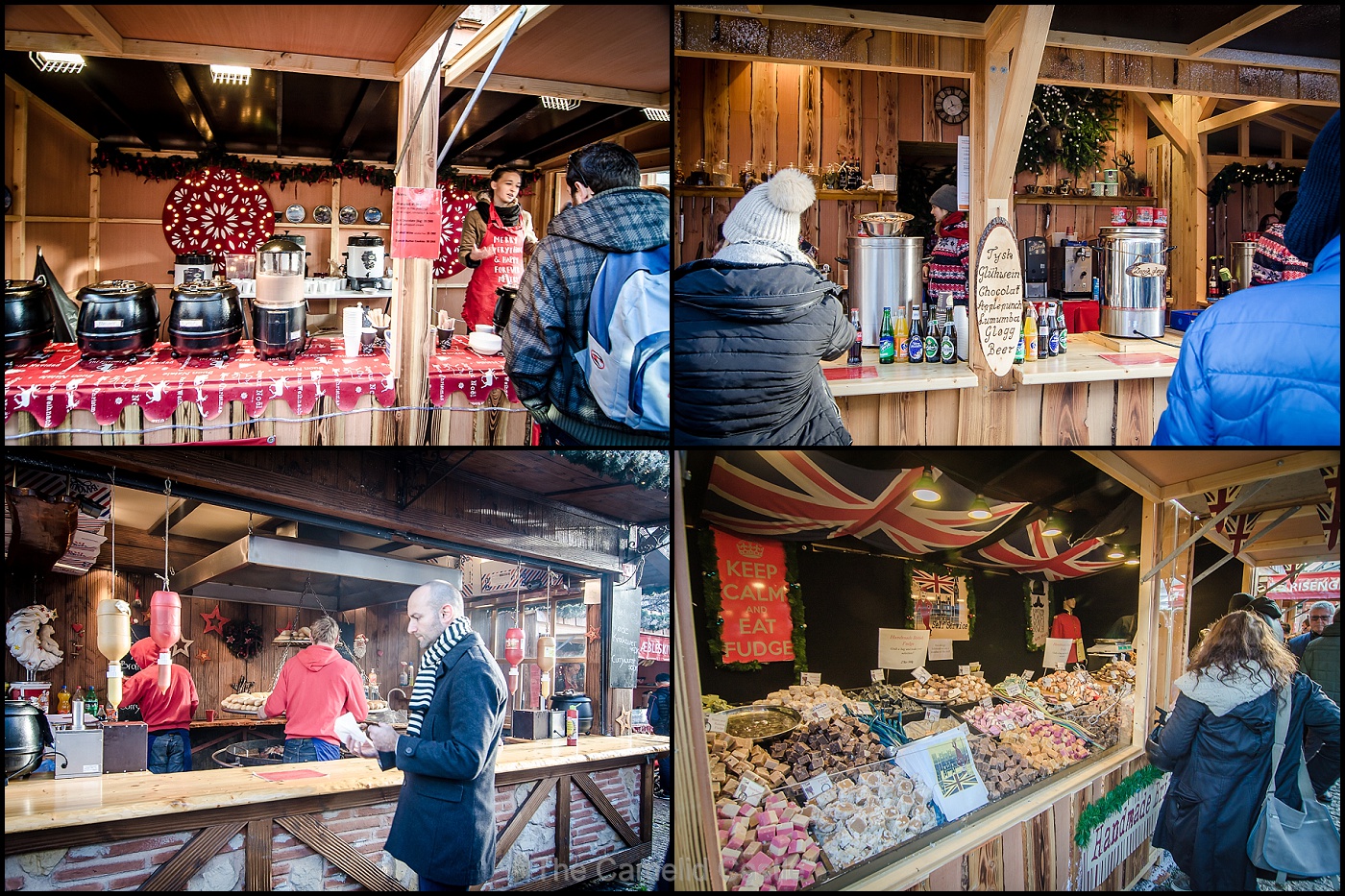 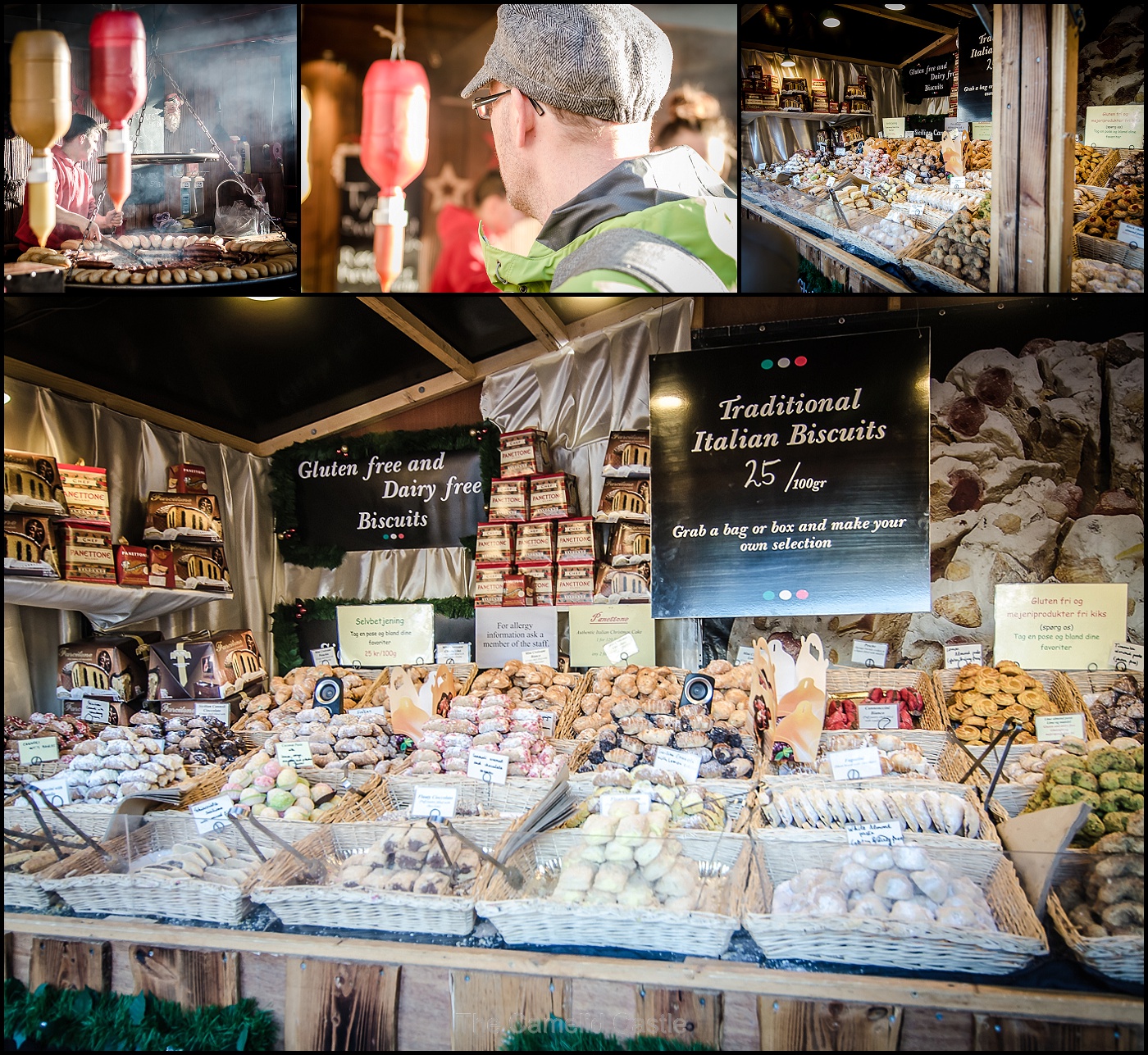 The kids had eyed off the crepes and the boys had spied the sausage product so we negotiated that if the kids ate their cheese sandwiches we had bought with us they could have dessert crepe.  I opted for some pastry type products for lunch since there seemed to be nothing vegetarian that wasn’t entirely carbohydrate based. Lucky we’ve been walking a lot!

The boys had various forms of sausage and sauce in bread (they are yet to have them on sticks, but that will be in Germany and Austria, no doubt). Soren was quite a fan of the sausages.  Then again, he and Astrid were quite keen on the nutella filled crepes too! To warm up the adults had some gloog (spiced wine with fruit and nuts). Antony and I became a fan on our last trip to Sweden.  It does work well on cold days! 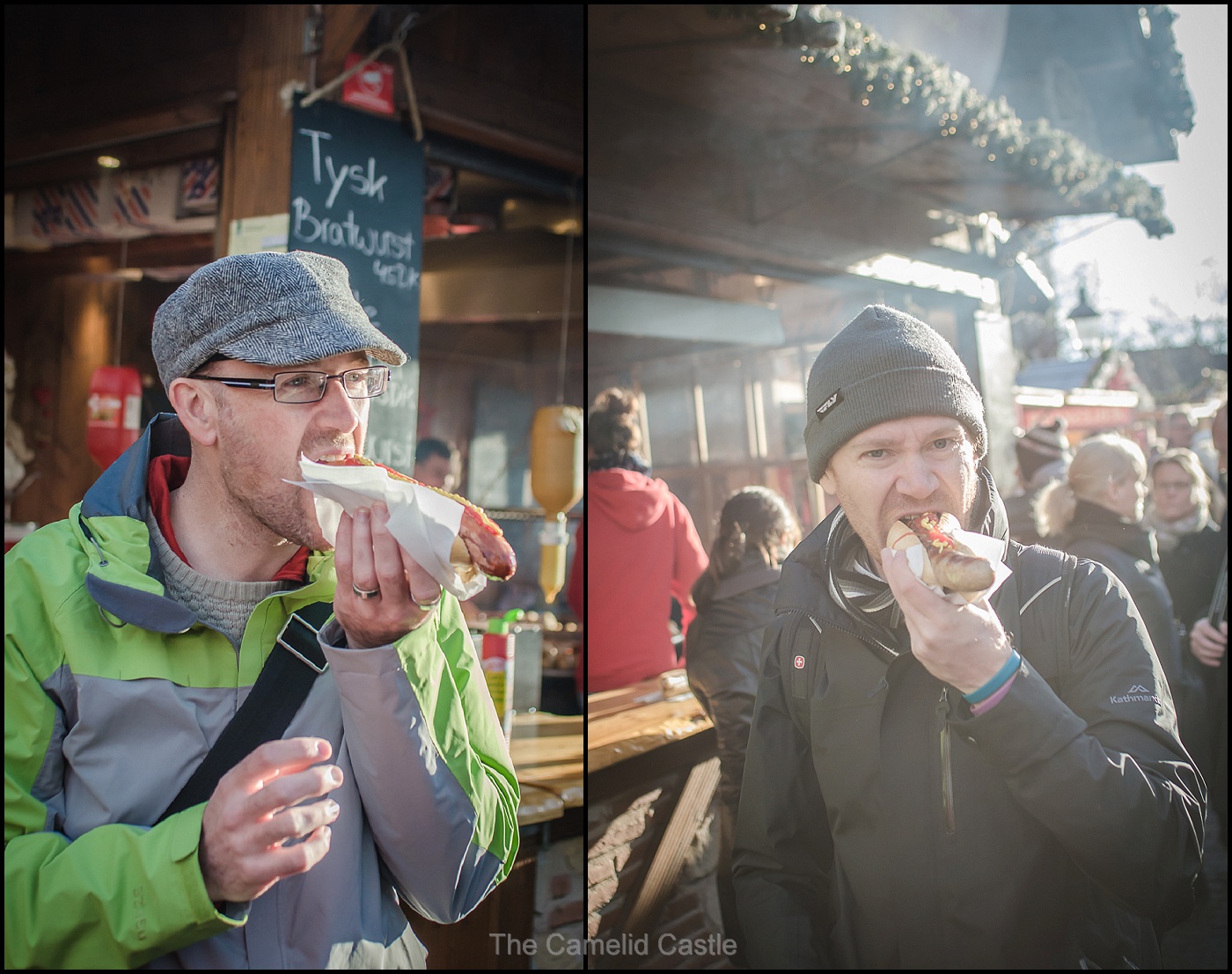 All full of nice warm food and drink, we decided to head off from the markets and make our way to our next stop of the day, the planetarium.

The Planetarium is also included on the Copenhagen card.  Astrid is currently very interested in all things space, so we thought we’d pay it a visit.  On the walk there Soren fell asleep in the erg0 (a much-needed rest). Unfortunately, this only lasted about 20 minutes and he woke up not too long after we arrived at the planetarium.  Astrid had a good play with the duplo and liked some of the experiments they had set up. There were a few interesting exhibits about the international space station (or rumstation in Danish).  At this point in the day we felt like we needed rum!  The planetarium is quite small and while the kids enjoyed it we only spent about 40 minutes there.

There is an imax theatre as part of the planetarium, and movies are included with the Copenhagen card entry. We didn’t think the kids would sit through a movie (they are also in Danish with English subtitles) so we just visited the exhibits. It was a nice break from the cold but unless you get in for free on the card or happen to be in the area I wouldn’t rush to see it.

Nyahvn by night (or afternoon in Winter)

Despite having been past Nyhavn on both the bike tour and boat tour, we hadn’t actually walked up and down the street much or explored the area.  After the planetarium we walked (and caught some trains) back to Nyhavn for an afternoon wander, we crossed some pretty canals in the process and also walked back past Christiansborg palace (we had planned a visit for later in the week). 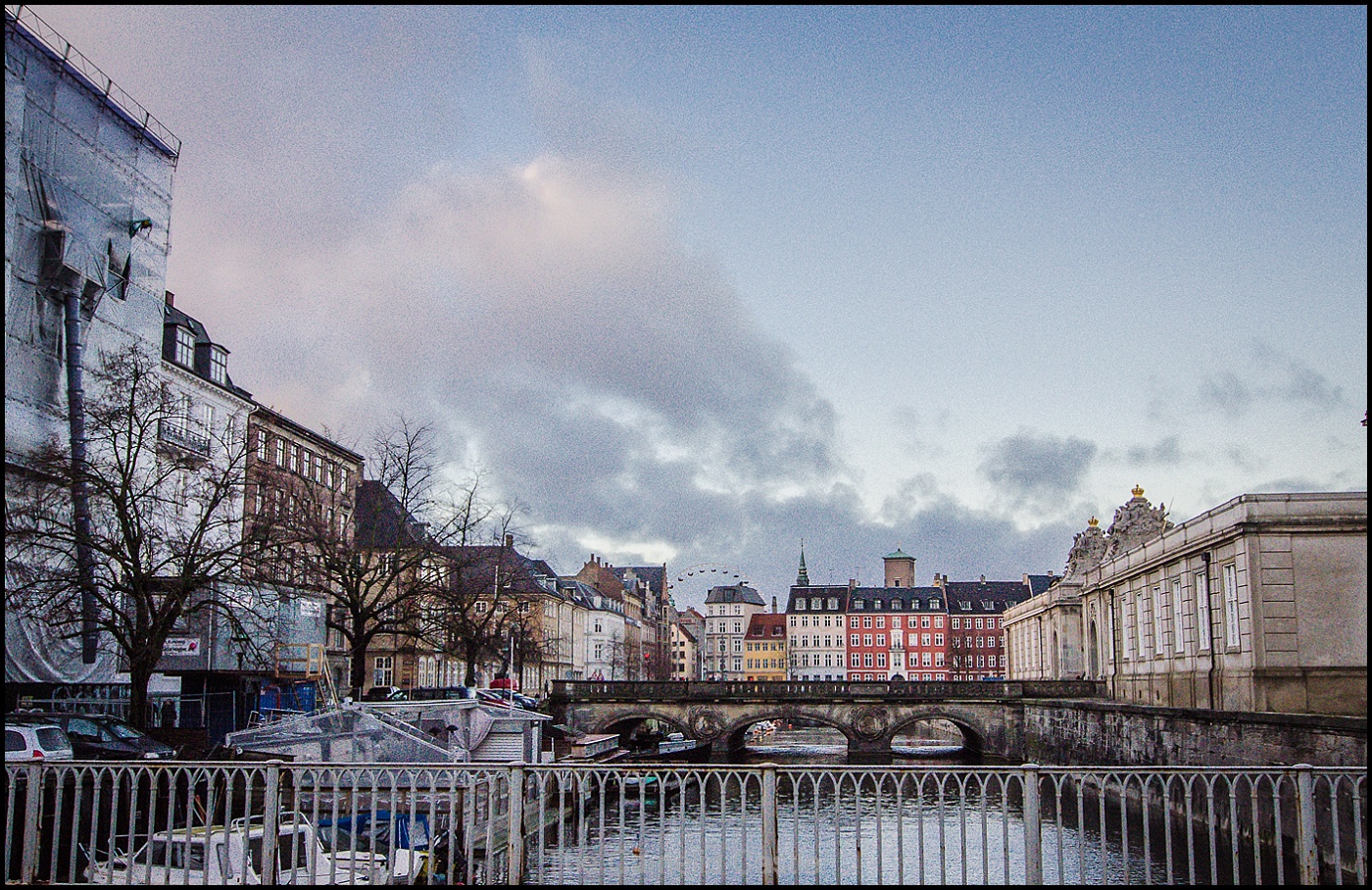 The sun was about to set, it was now 3pm, so it was looking quite pretty. All the lights were starting to come on up and down the street and there were plenty of people out and about at the cafes. 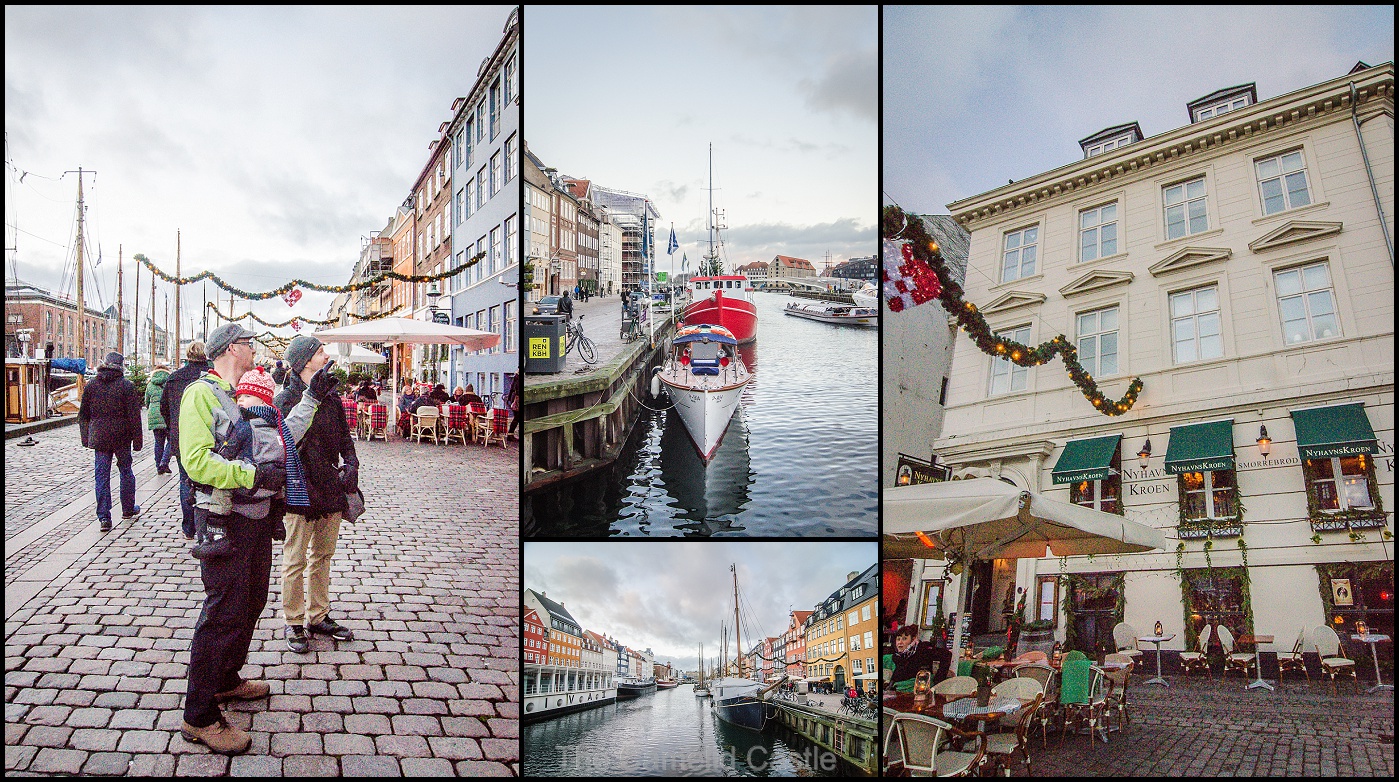 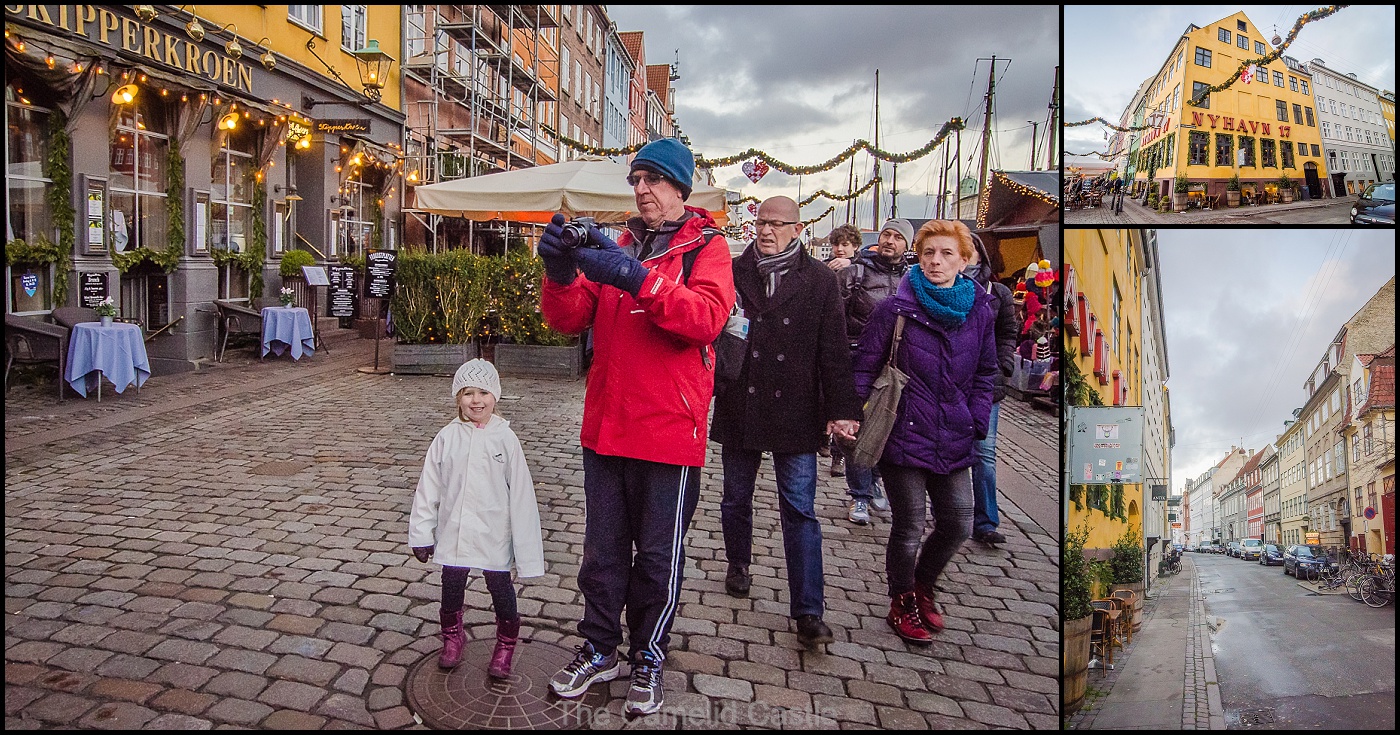 On the bike tour, Christian, our guide, had mentioned that the waffle house on the corner did excellent waffles and ice cream. We figured we might as well give it a go!  The kids certainly didn’t object. When it’s almost zero degrees outside, clearly the best thing to do is eat ice cream. It was quite overheated inside the shop, so it felt almost sensible. 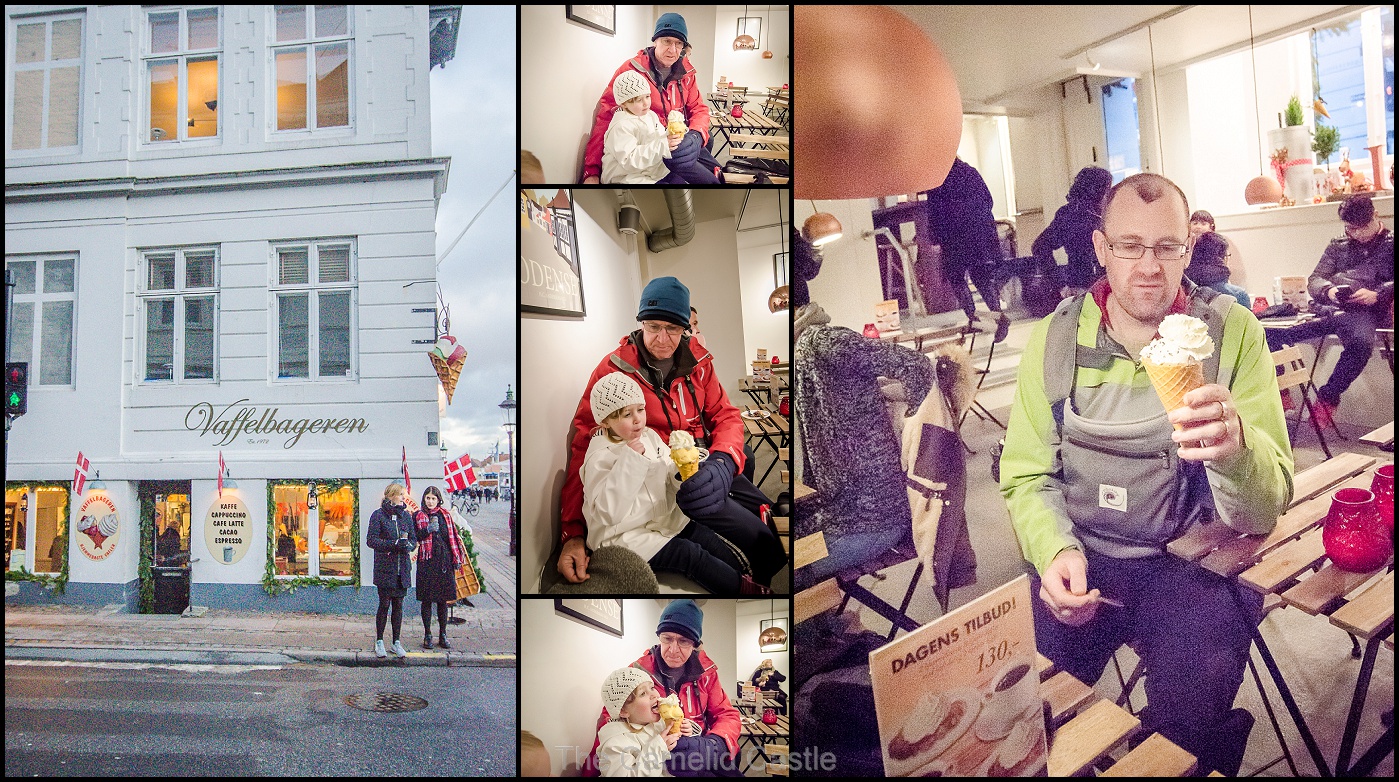 After the ice cream it was definitely getting dark so we wandered back down the street, watching the sun set and all the lights coming on. Being a Sunday afternoon it was definitely busy. It was also St Lucia day, and there was a parade of boats paddled by children with glowing lights. The were going to paddle up and down the canal and sing Christmas carols. Unfortunately, they weren’t coming back past where we were until 4.30pm and it was now dark and cold and only 4pm! We watched the first lot of boats set off but decided not to hang around as much as we wanted to. The kids were definitely in need of dinner and a warm bed. 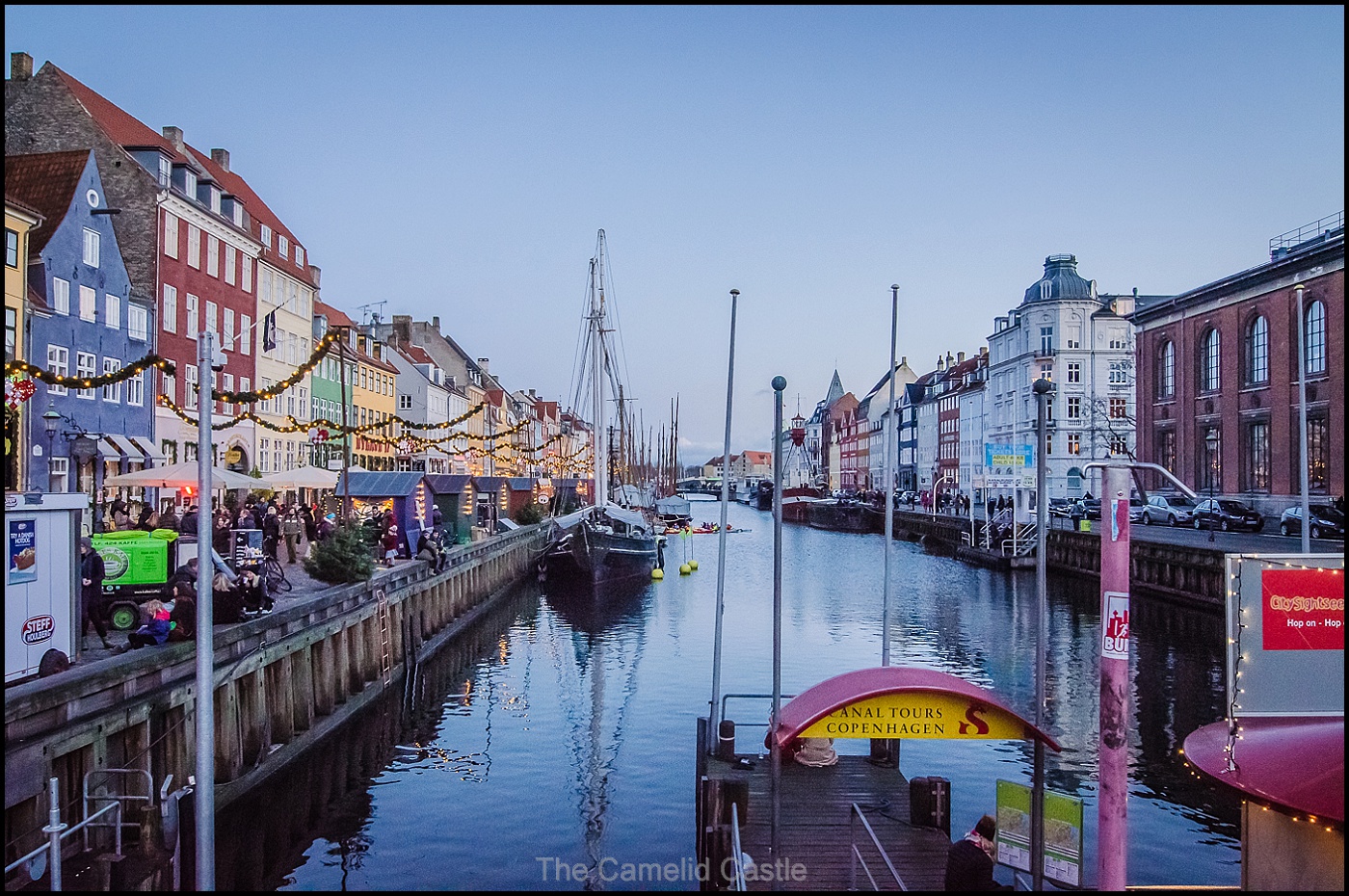 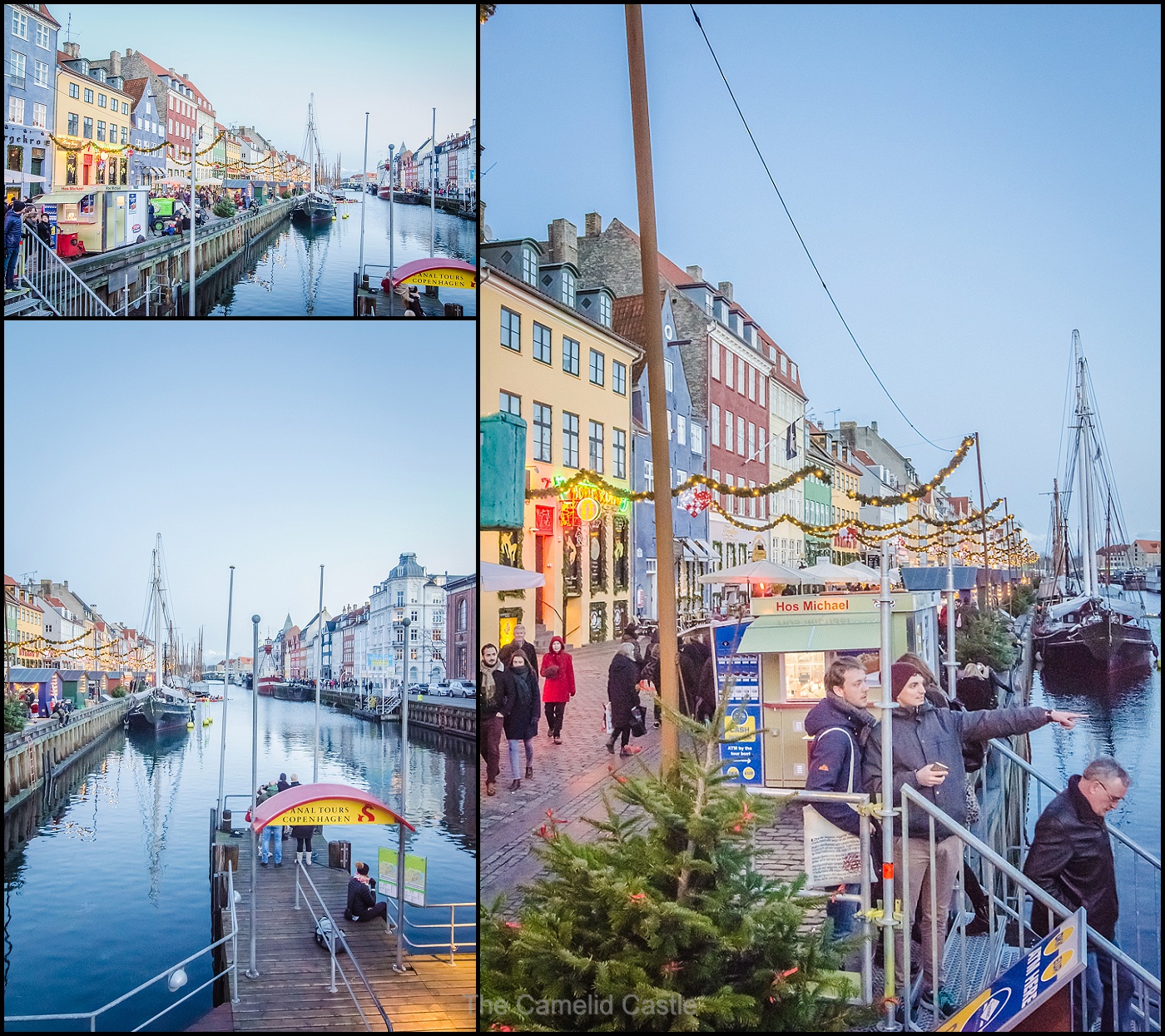 On the way back to the accommodation we noticed all the lovely Christmas lights on in the shopping centres and office buildings. We were a tad weary to appreciate them though!

The next day we had planned a trip out to the National aquarium and some more fun at Tivoli.