As seems to be the way when we don’t have to rush out, the kids decide to wake up at 6.30am and not go back to sleep. As a change from bacon and eggs we had German sausage (Bratwurst) and eggs. Alan was not feeling well so he decided to spend the day resting up in the warm. The rest of us saddled up and headed out via the ever efficient trains and trams to visit the ‘Palace of Tears’, a museum documenting life in the East before the fall of the wall. Despite significant checking before we set out it appeared the museum was not open, so we moved onto our second stop of the day, the Wall Memorial. Luckily it was a beautiful day to be out wandering. 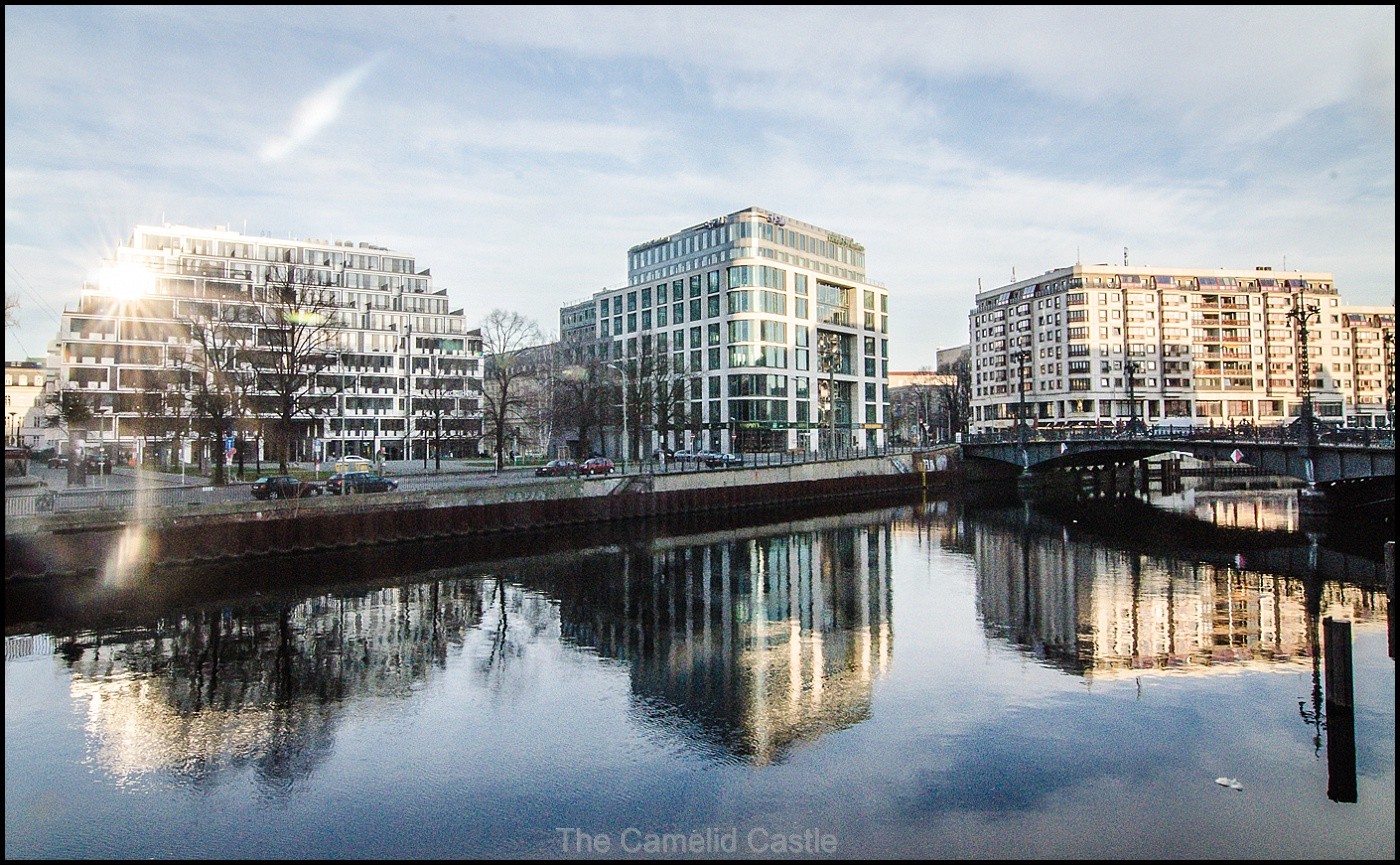 The Wall Memorial consists of another museum, which although listed as open, was also closed as well as an outside area of the old ‘death strip’ (which was a 100m wide strip cleared between ‘the wall’ and an inner wall to allow guards to see any attempts at escapes) including sections of the original walls and the fences that created the death strip.  Other sections were represented by vertical iron bars in long sections that you could see through and walk around.  A different way of looking at the wall. 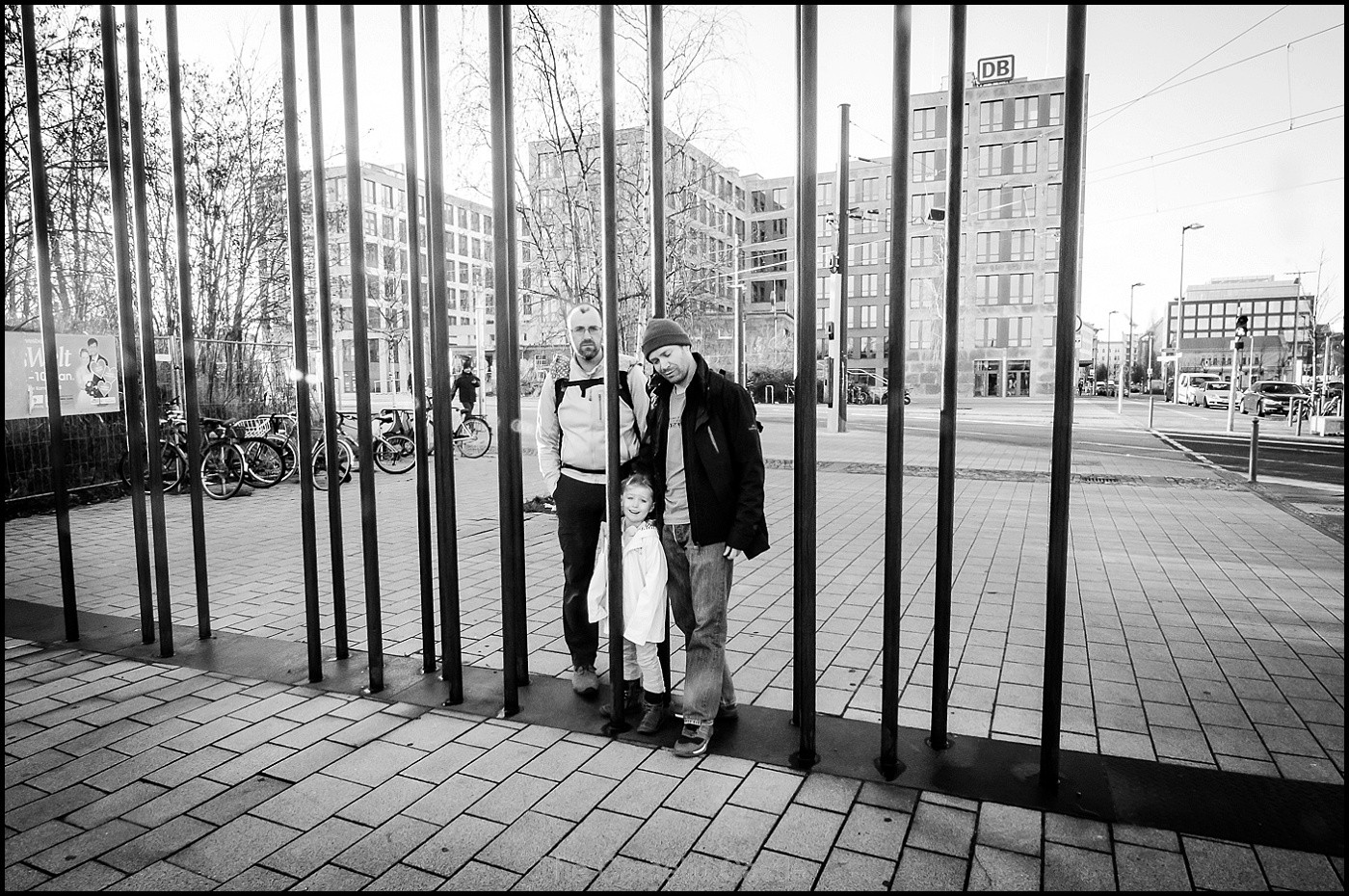 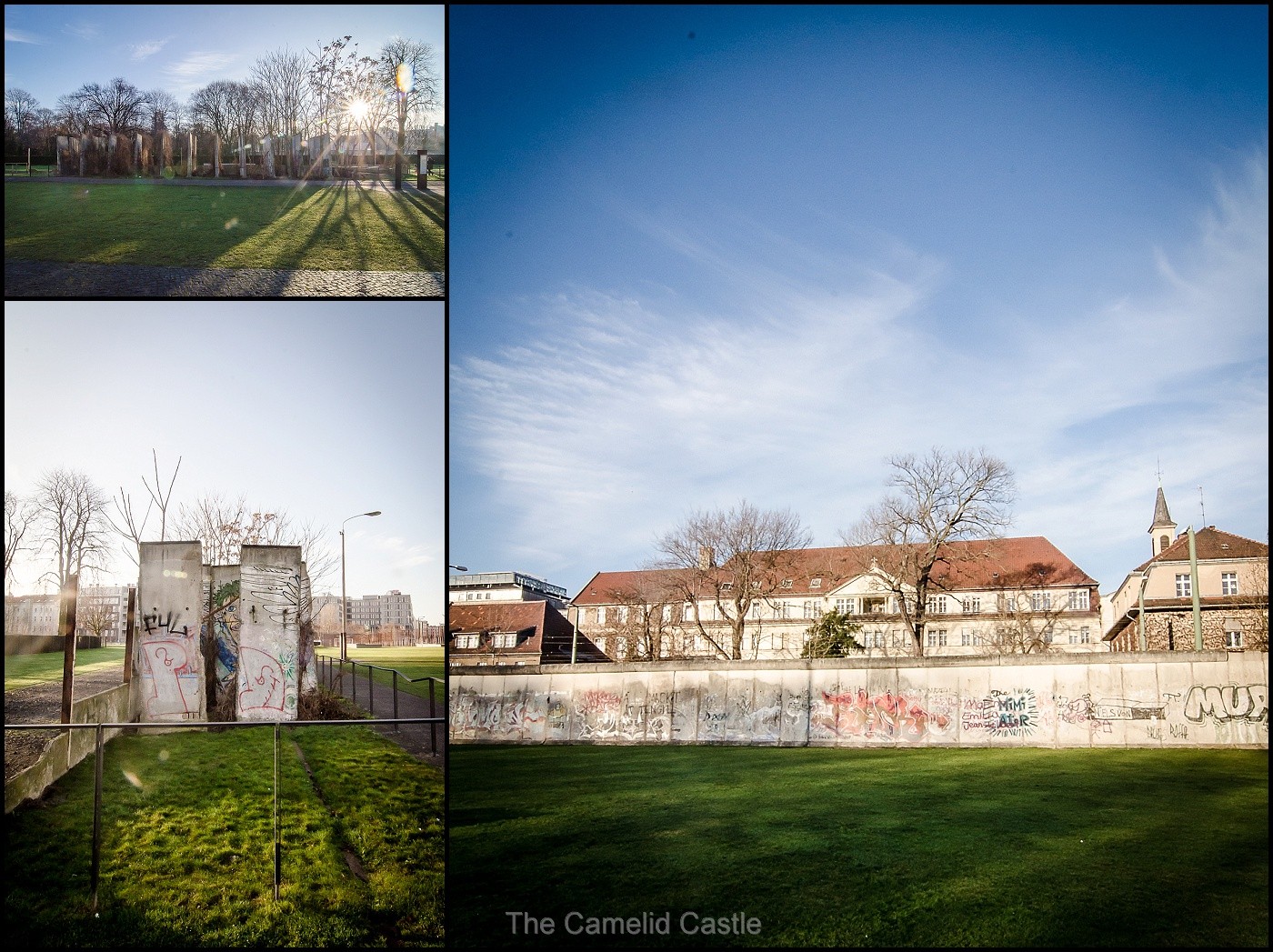 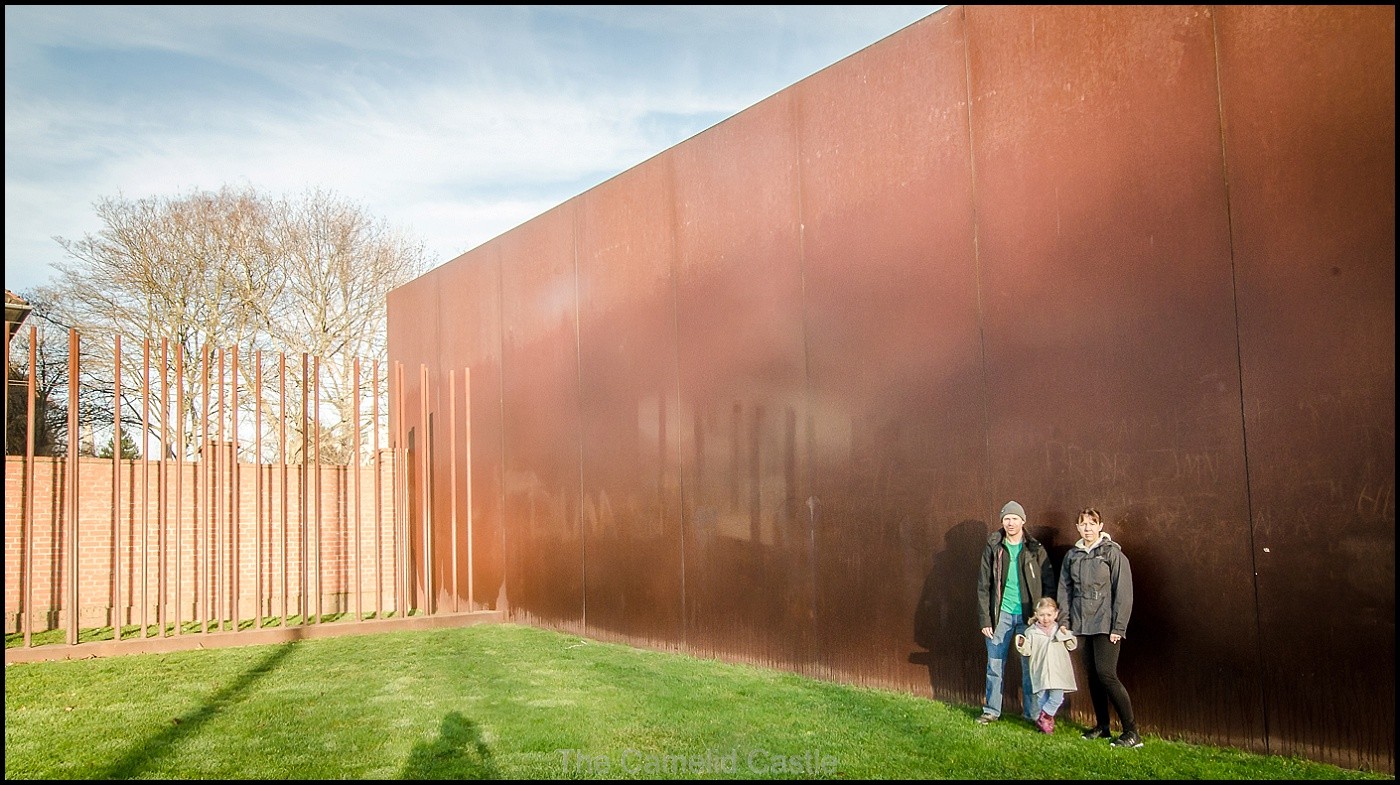 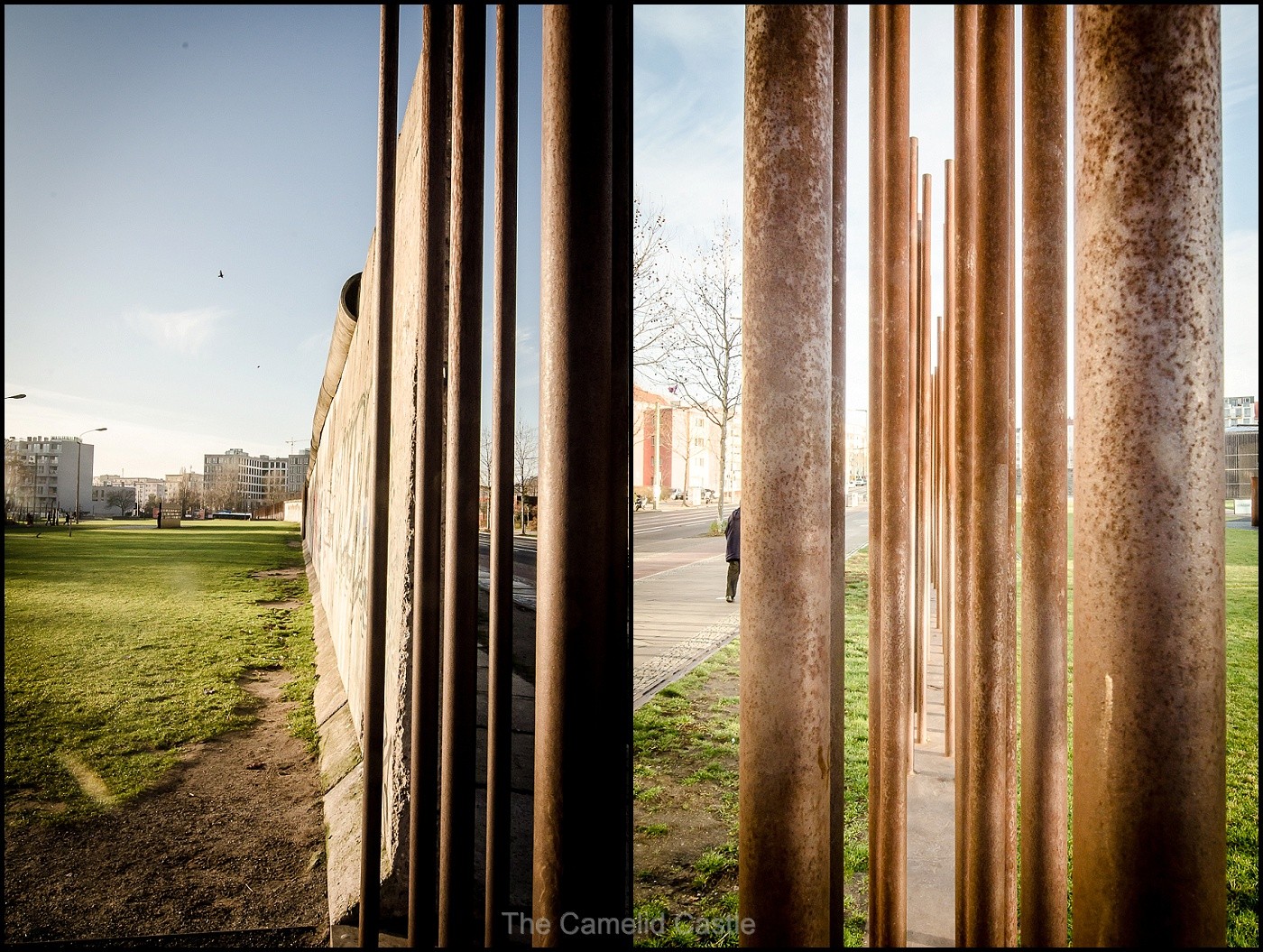 There was also big sections of the concrete slabs that made up the wall, complete with the rebar inside it.  It certainly wasn’t inviting looking.  When you stand inside the ‘death strip’ it was clear how wide the area actually is, and how it would have been terrifying to have to make to the dash across for freedom.  Many did not make it.  Several did though, and their stories were highlighted in many well-documented escape attempts, within the memorial.  There were also quite a number of escape tunnels that were marked out, and stories about how they eventuated. 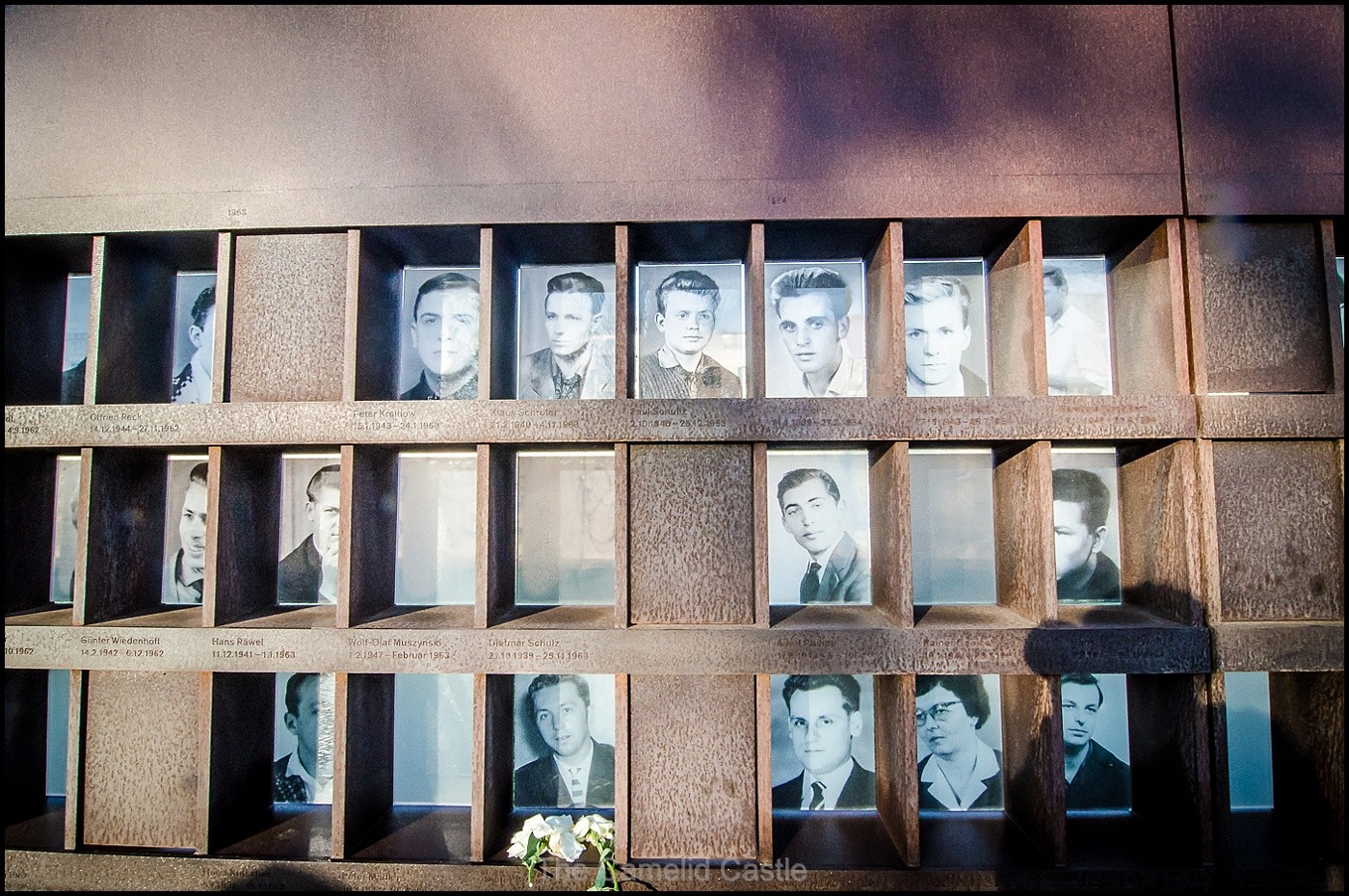 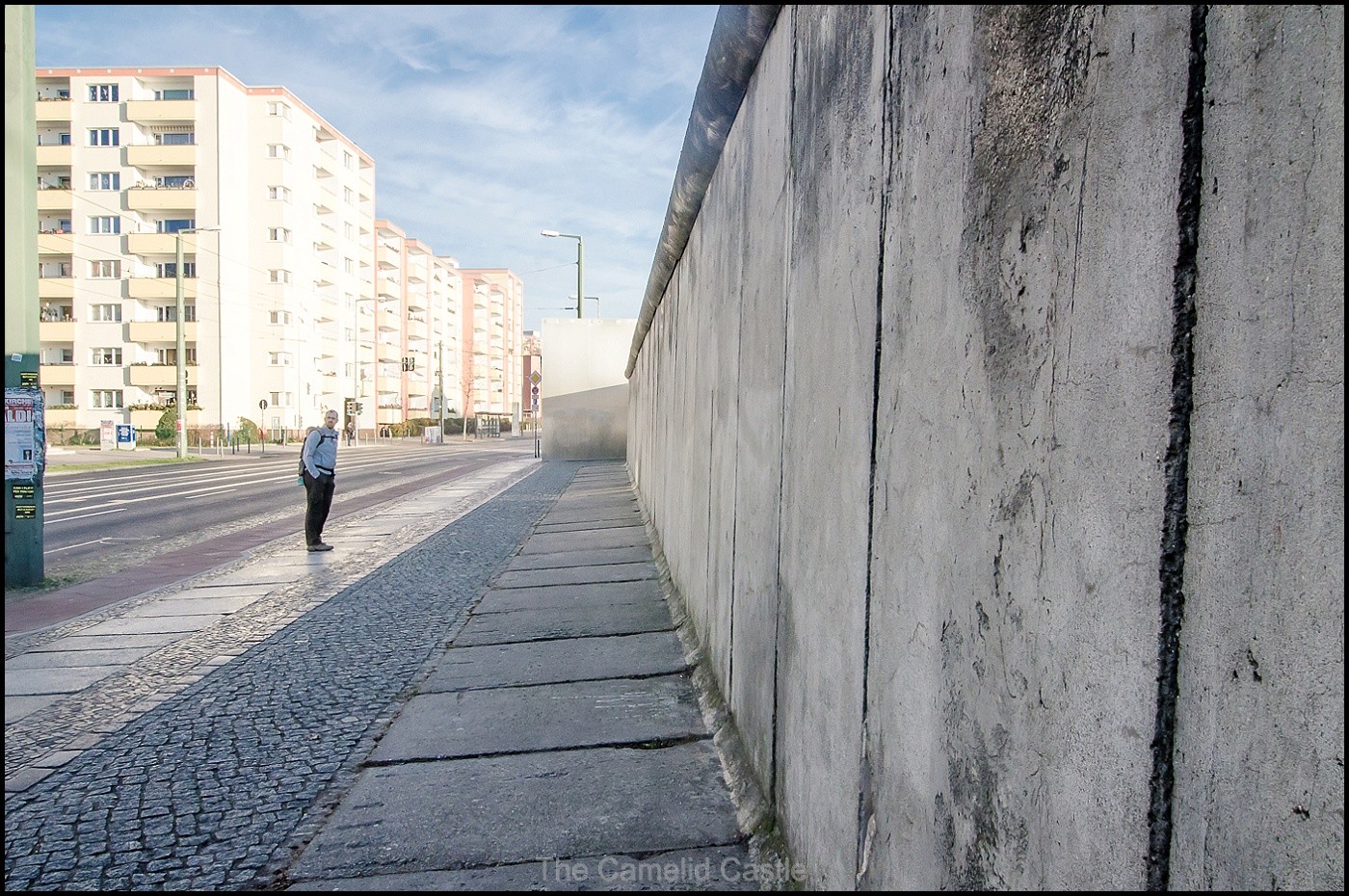 As is usually the way when we don’t want him to, Soren decided it was a good time for a nap – ruining our plans to sneak him back to the apartment for a lunchtime nap. Lots of long days has meant that you just have to nap wherever and whenever….. usually when your parents don’t want you to!  We left him to sleep in the ergo on Anto, and headed down to the train station to catch the train back to the TV tower.  The stations in Berlin were relatively clean and had interesting artworks in many of them. 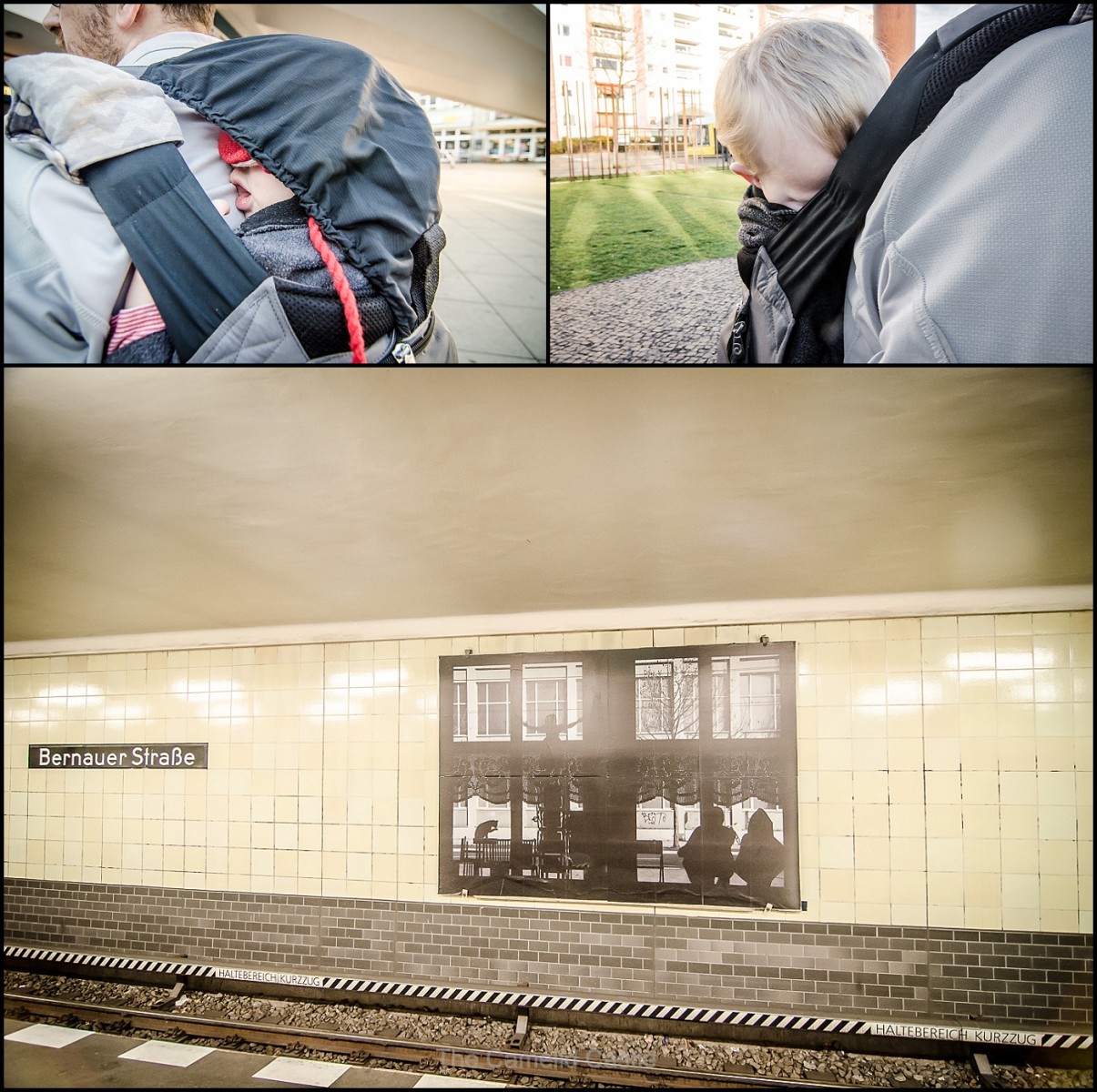 Once we walked to the TV tower, we lined up for our tickets (we got a slight discount with our Berlin welcome cards) and had to wait for our allotted turn to go up. They were letting people up in groups every 15 minutes.  The tower was only open until 2pm on Christmas Eve, normally it’s open until midnight.  Luckily it wasn’t too busy and we only had to wait about 20 minutes until our time slot.  There were plenty of seats and it was warm so we didn’t mind the wait too much.

We had to go through security, with a metal detector and bag search.  This caused Soren to wake up of course, rather inconvenient. Once it was our turn for the lift, we got escorted in by our very efficient German lift operator, who told us the ride up takes 40 seconds. The lift had a glass roof, but was rather small. You couldn’t really feel it moving, but seeing the floors whizz by above you was a little disconcerting.  We got off the lift and the viewing platform was pretty busy.  There is a bar, cafe and restaurant, but we were mostly interested in looking at the view.  Despite it being a very clear day, it was quite hazy and hard to see the horizon from up the tower. It was clear how flat Berlin is, and how many apartment buildings there are.  The information signs around the viewing area informed us that Berlin is the second largest European city, with a population of 3.4 million but is much more compact than most Australian cities. 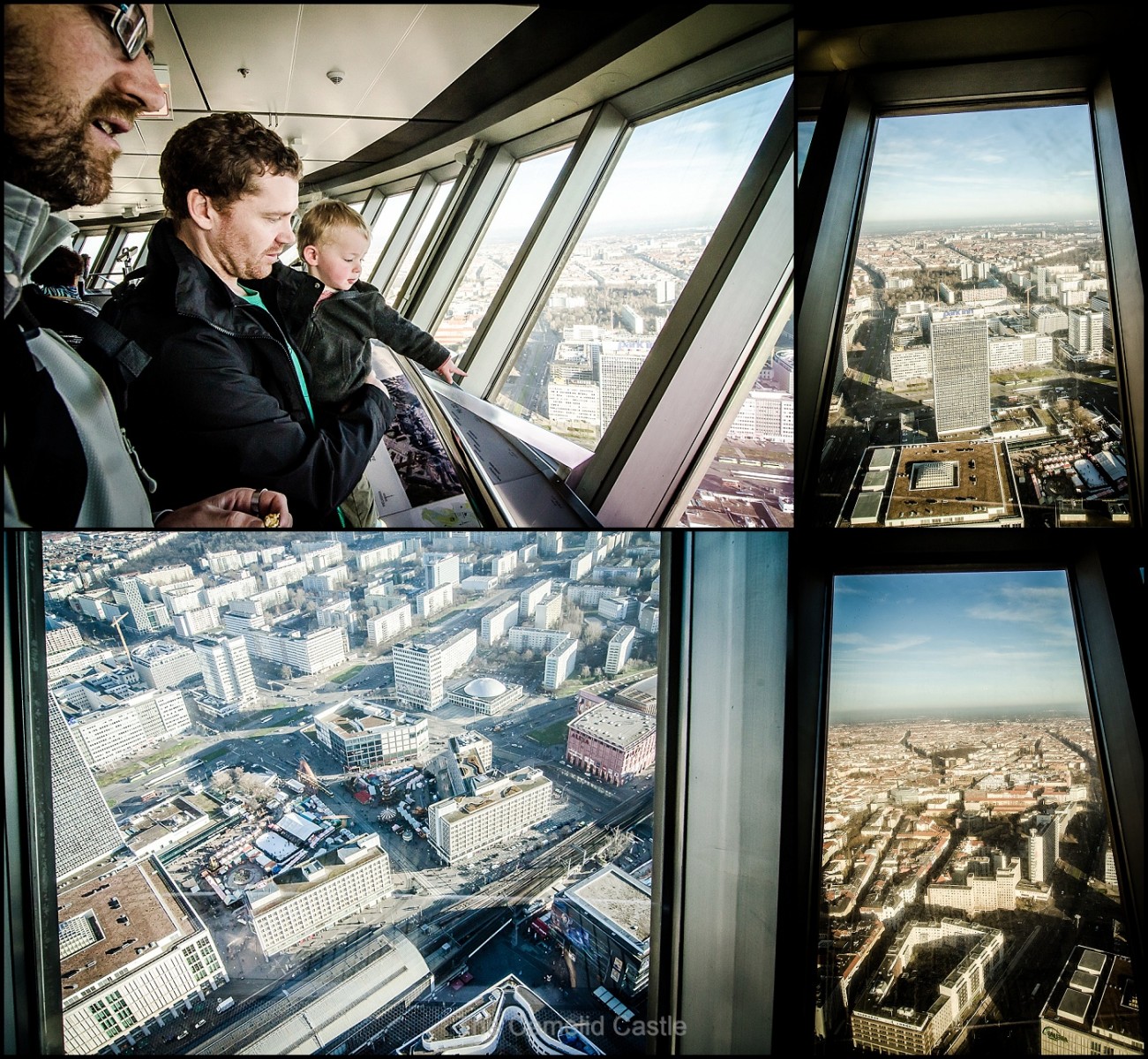 After not too long we had circumnavigated the viewing platform and were sick of the crowds, so decided to head back down and get some lunch.  We had a short wait for the lift back down, and our return 40 second ride to the ground.

It was now well and truly lunch time so we thought we’d check out another Christmas market for our luncheon fare.  We headed via train and a short walk to the Gendarmenmarkt Christmas market. We’d ridden past the day before and had heard good reviews about it.  This market has a 1 Euro entrance fee during certain times (most markets are free to enter). We assume it is due to it being more upmarket than some of the other markets. There were lots of tents set up to eat in, and actual pop-up restaurants with seating, glass windows, and heating.  The market is set in front of the Berlin concert hall and the French and German churches. There was even another peace bear for us to visit! 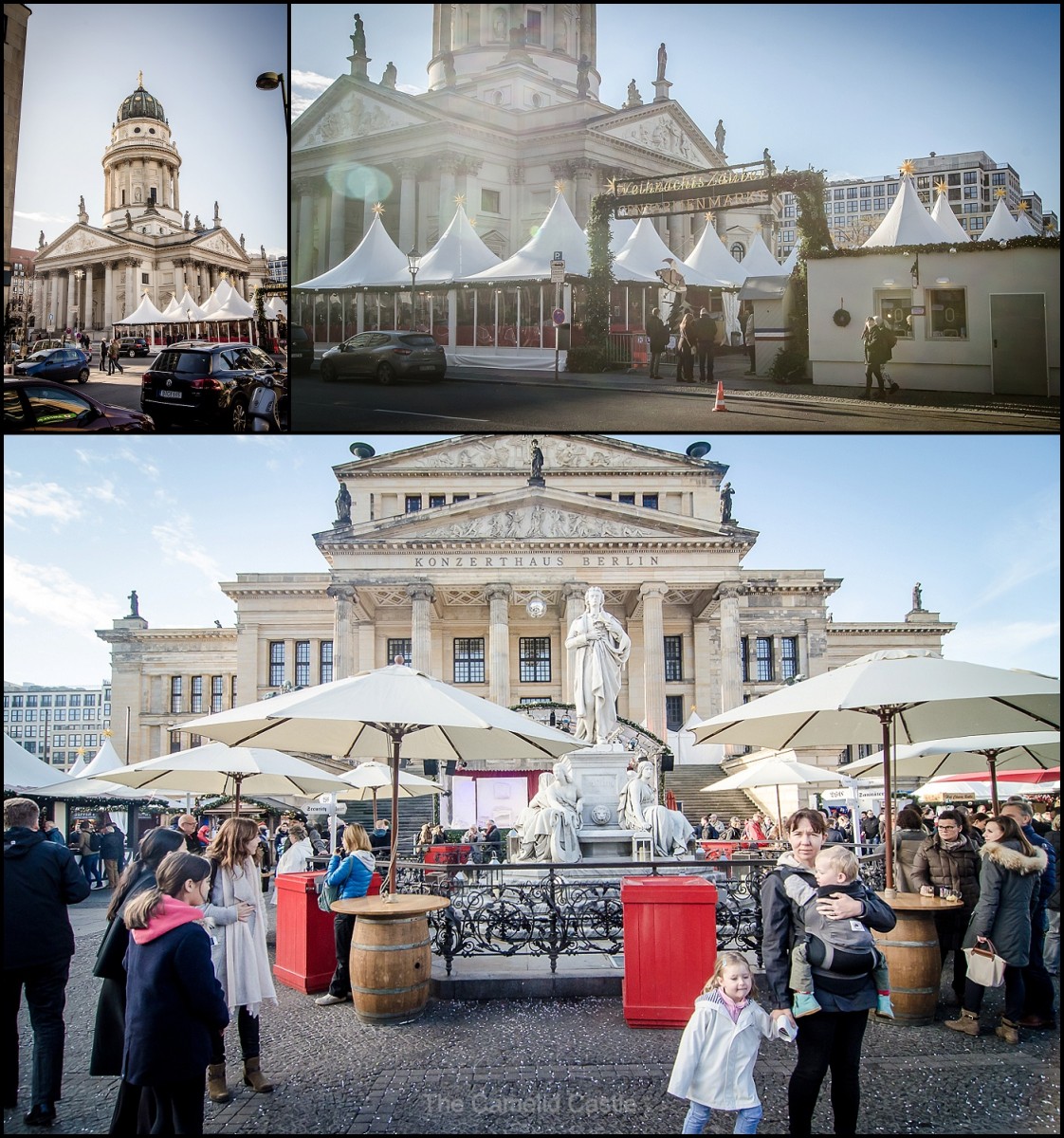 The market was mainly food, and we had a wander around to help us decide what are lunch options were. Anto and Mikl decide they needed beer (of course) and Anto had a large pork knuckle. Mikl decided on the sausages with kale and potatoes, that we had been seeing at markets everywhere. The kids have pork knuckle sandwiches from Anto’s large supply of meat.  I have the side dish of garlic champignons and a hot choc, the kids also scored a hot chocolate.

We then decided we had better try some dessert, so head to one of the stalls next door for apple strudel and hazelnut strudel, both with vanilla sauce. The kids were a pretty big fan of dessert, as usual!  Despite seeming a bit of a strange combination, the hazelnut strudel was really good. 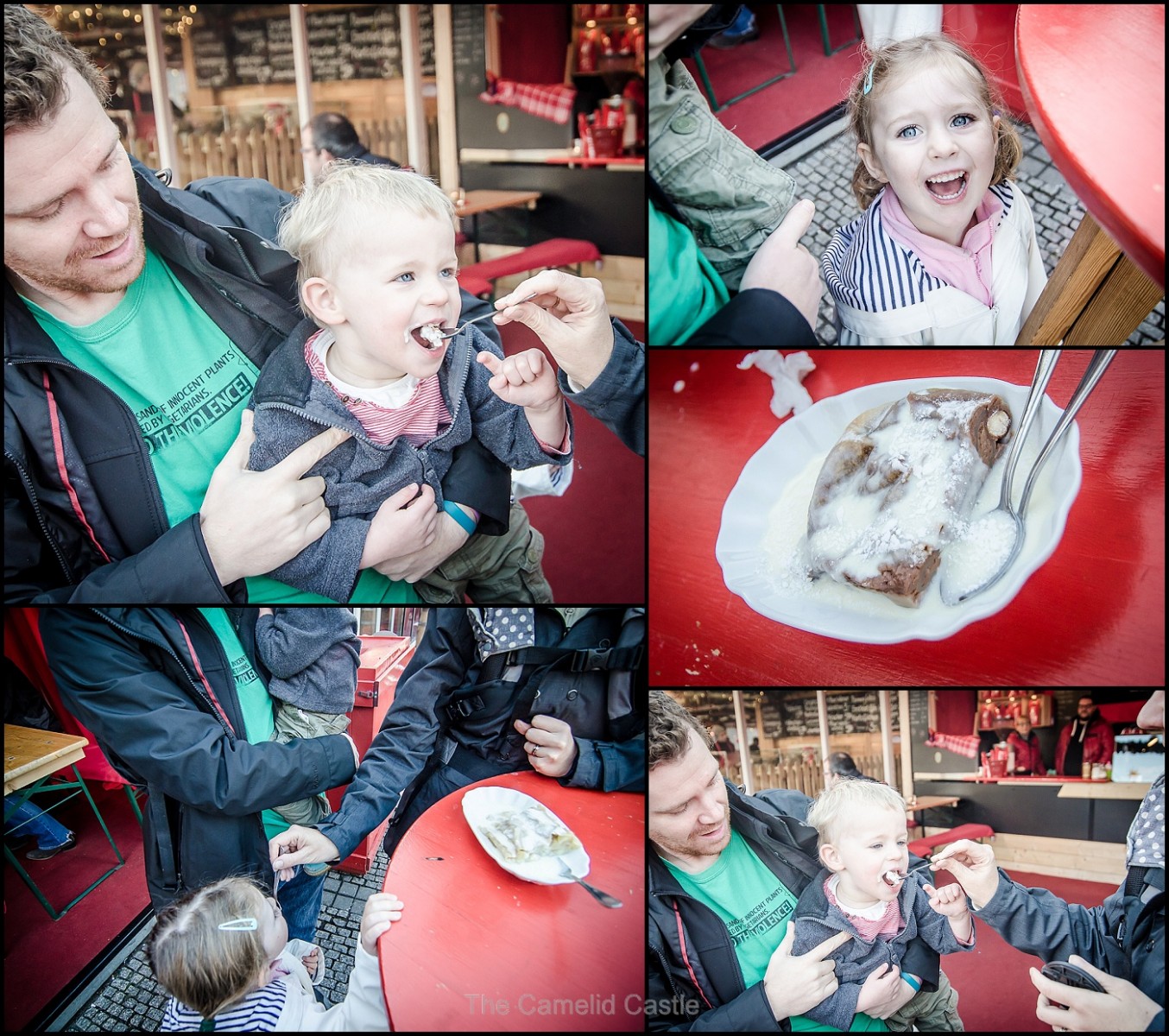 The afternoon and evening of the 24th of December, in Germany, is when most Germans celebrate Christmas.  As a result, we knew not much was going to be open.  We deliberately kept a light schedule for this time, and after a morning of sight-seeing, decided to head back to the apartment at around 2pm to give the kids a rest. From about 4pm onwards, all the church bells were ringing for about 10 minutes every hour. This continued on all afternoon and evening.  Once the kids were up from their rest we were treated to a nice sunset and some views of the now mostly deserted streets. 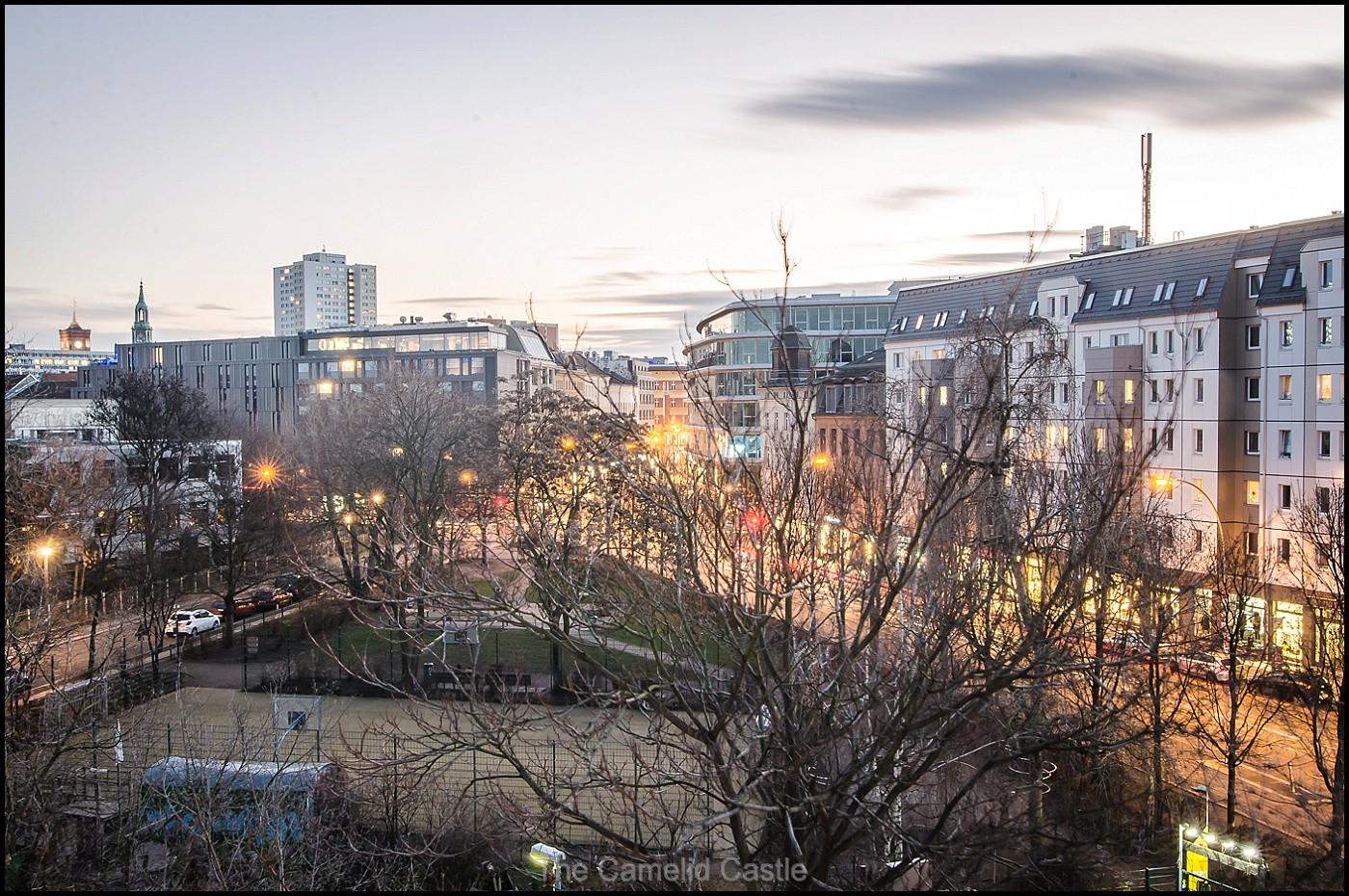 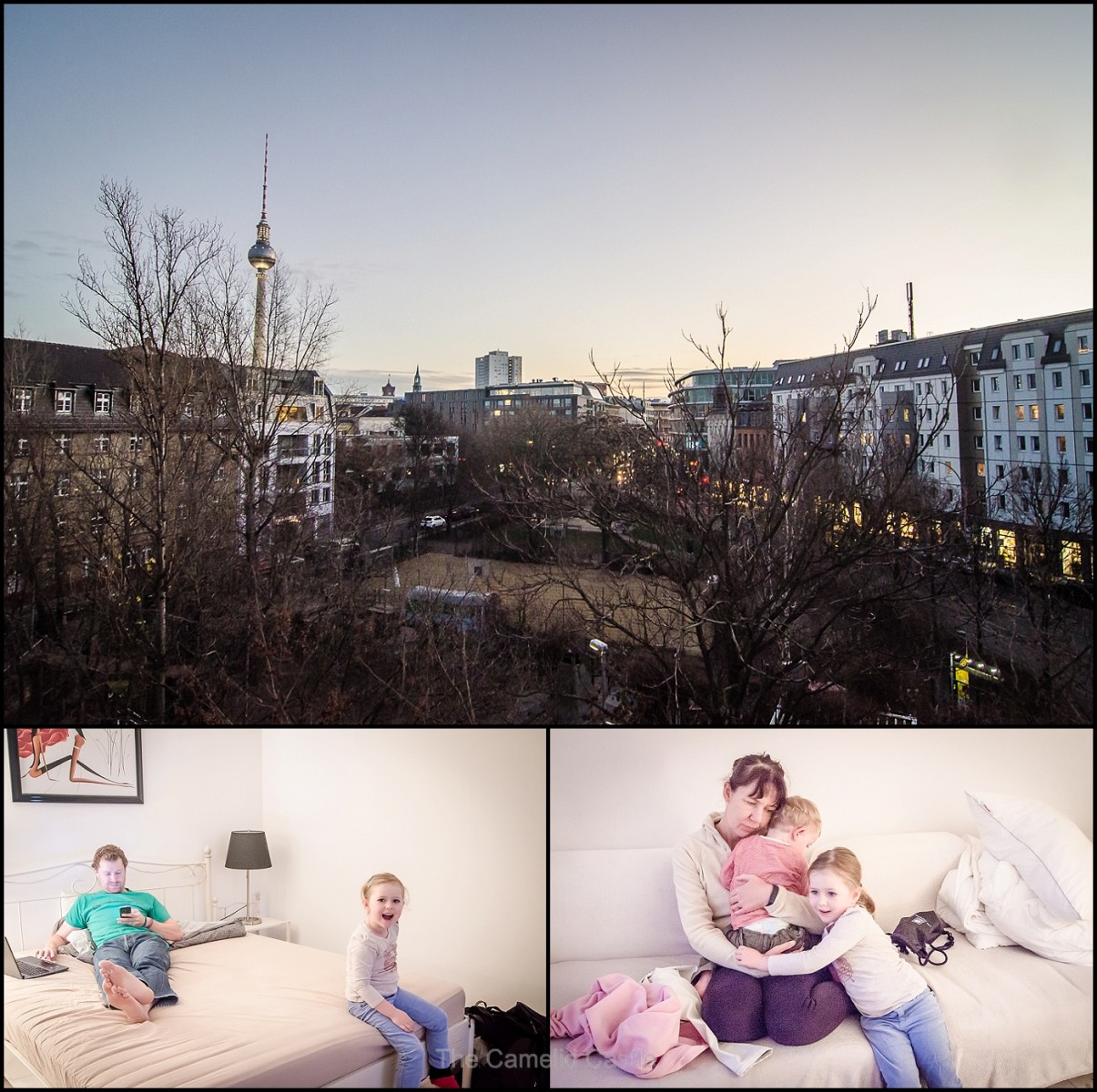 Since not much was going to be open for dinner and we weren’t up for a big fancy dinner out, we decided to head out to Mustafa’s Gemüse Kebap place for dinner. This is a very famous kebab/kebap place within Berlin that I had read about before our trip. Seriously, it is world famous, despite essentially being a street vendor! It even has a webcam to show you how long the line up is…..  We weren’t 100% sure what time they were open until, being Christmas Eve, but the webcam confirmed there were people lining up.  We took a punt and decided to catch the couple of trains and head to Mustafa’s for dinner.

When we got there, the line was about 30 people long but we figured we’d line up anyway.  About then, a staff member appeared and indicated they were out of chicken for the night, and only vegetarian was available. This cleared the line out by a few more people, but most stuck around. I was happy with the vegie option (obviously) and the others weren’t overly fussed.  Our wait was only about 15 minutes or so.  Once at the front of the line we only had to decide whether we wanted the flatbread or wrap style, and with or without chilli. Anto and I had the flatbread/pocket kebap and got one of them without chilli for the kids. Mikl and Alan went the wrap (with chilli).  The hype wasn’t undeserved. They were seriously the most delicious kebabs, ever!  They were around 2.80 Euro each, so a pretty cheap dinner too.  The kids went crazy for them….. maybe we had deprived them of vegies for too long, or they were just seriously good kebabs! 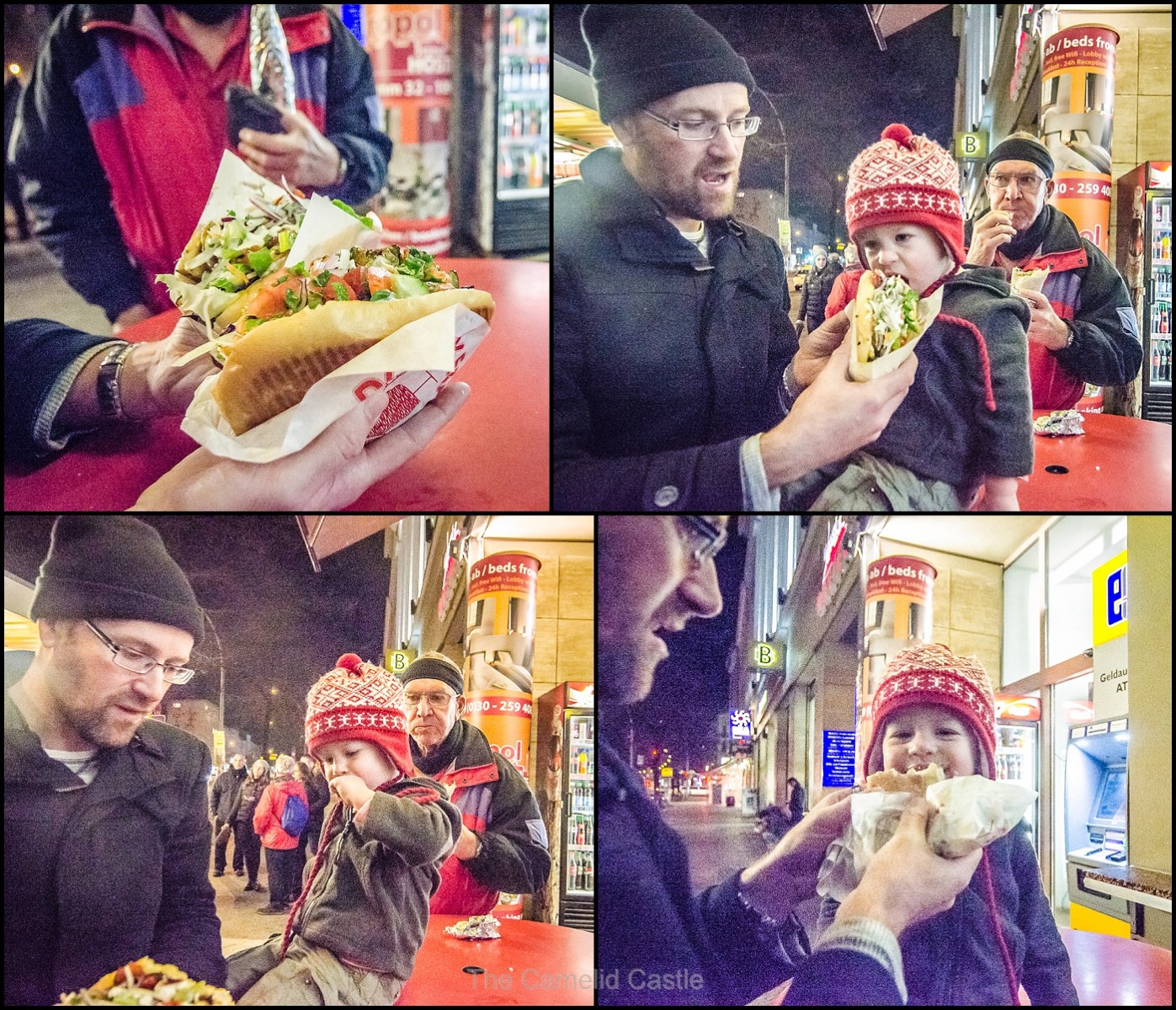 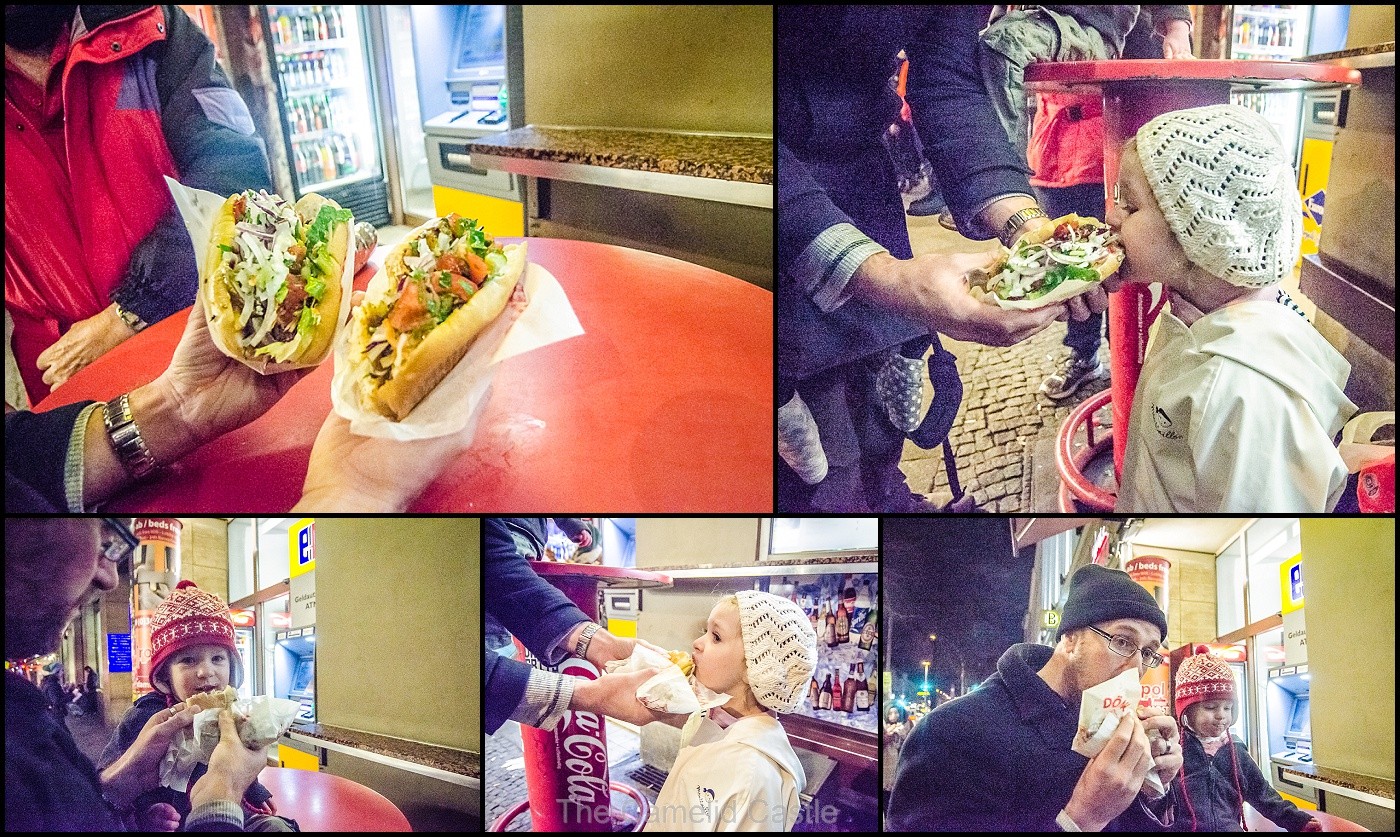 We had gotten to Mustafa’s before 6pm and lucky we did, because only about 3 people after us got served, before they closed up for the night.  Normally they are open until around midnight, but it was obviously an early Christmas Eve knock-off.   Our tummies full of delicious pre-Christmas kebab, we decided to catch the trains back via Alexanderplatz, and see what was open.  It turns out not much was open (as expected) but we did pick up some pastries at one of the train station coffee shops – the train station, McDonald’s and Starbucks were about the only things open!

The train stations were actually fairly busy with lots of people heading out to Christmas dinners. We saw bags of presents (and whole panettones) being carted on the trains.  There were also plenty of dogs on the trains, so that kept Soren happy! There were quite a few younger people (and lots of tourists) wandering the area around Alexanderplatz.  It was a fairly mild night so we checked out the closed markets and checked out the very cool clock, that showed us it was now 4am in Sydney and Canberra, and Christmas morning! 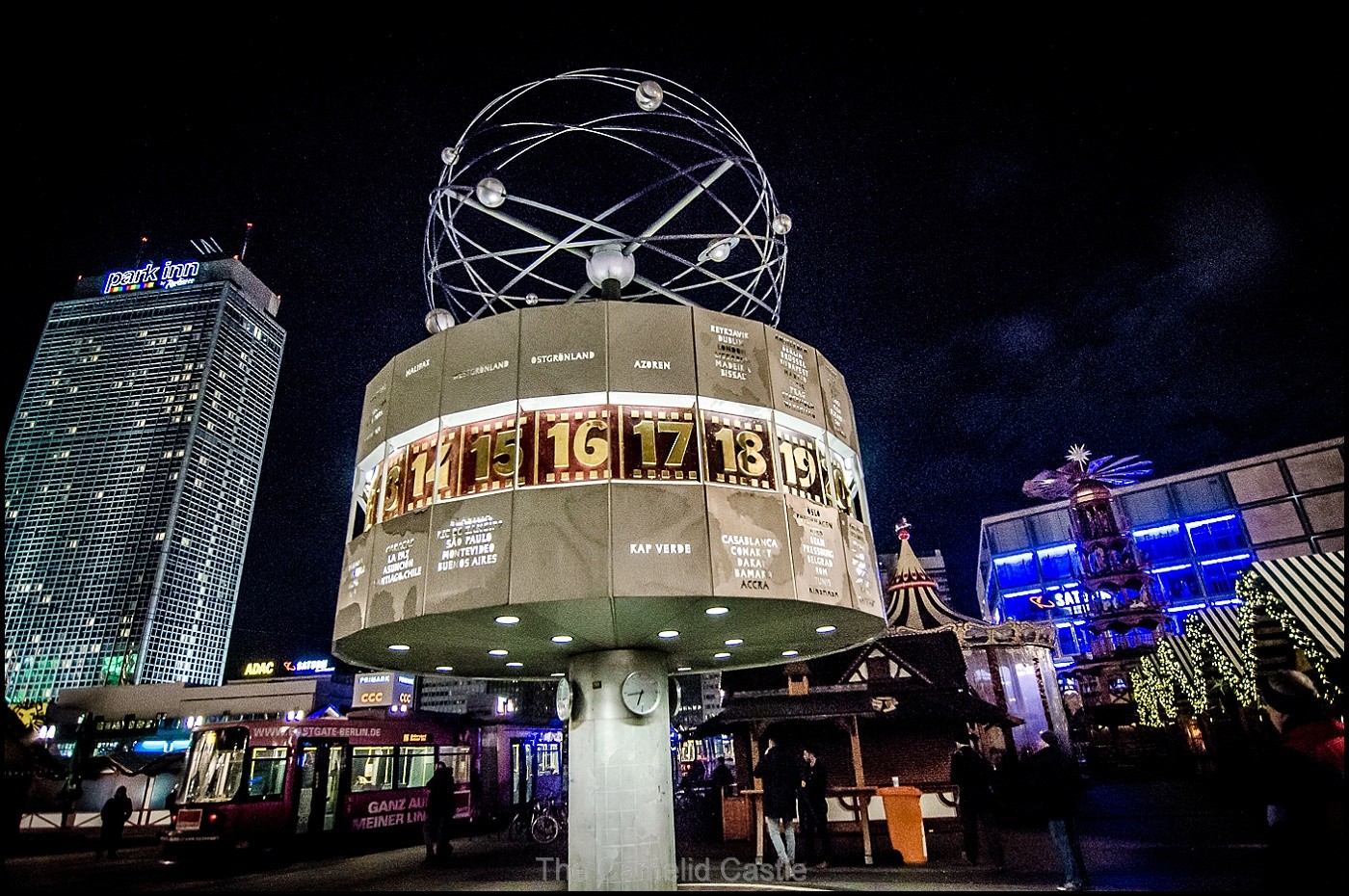 By the time we made it back to the apartment it was time for the kids to head to bed (they sadly weren’t keen for an early night after a late afternoon nap), and the adults needed a quiet night after a couple of busy weeks. We had an early booking for a tour of the Reichstag building, the next day and a full day of sightseeing in Berlin planned for our Christmas day.

Statistics for the 24th of December 2015, in Berlin – the temperature was 3 to 11 degrees with a mean of 7 degrees ……  The chance of snow for Christmas was basically zero! Total walking for the day was 10.8km, a pretty light day really!  After another visit to a Christmas market, sausage, beer and strudel consumption was high.  We all agreed that the kebabs were definitely worth the train trips and to be checked out if you are ever in Berlin.