Our Boxing day was spent exploring Potsdam, a city not far from Berlin. We did this mostly on bike (our third bike tour in just over 2 weeks in Europe and our second in our 4 days in Germany.  After the bike tour there were more Christmas markets and back to Berlin for a Biergarten dinner! Post mostly by Anto while sitting in freezing Vienna waiting for a parcel (that story to come!)…… 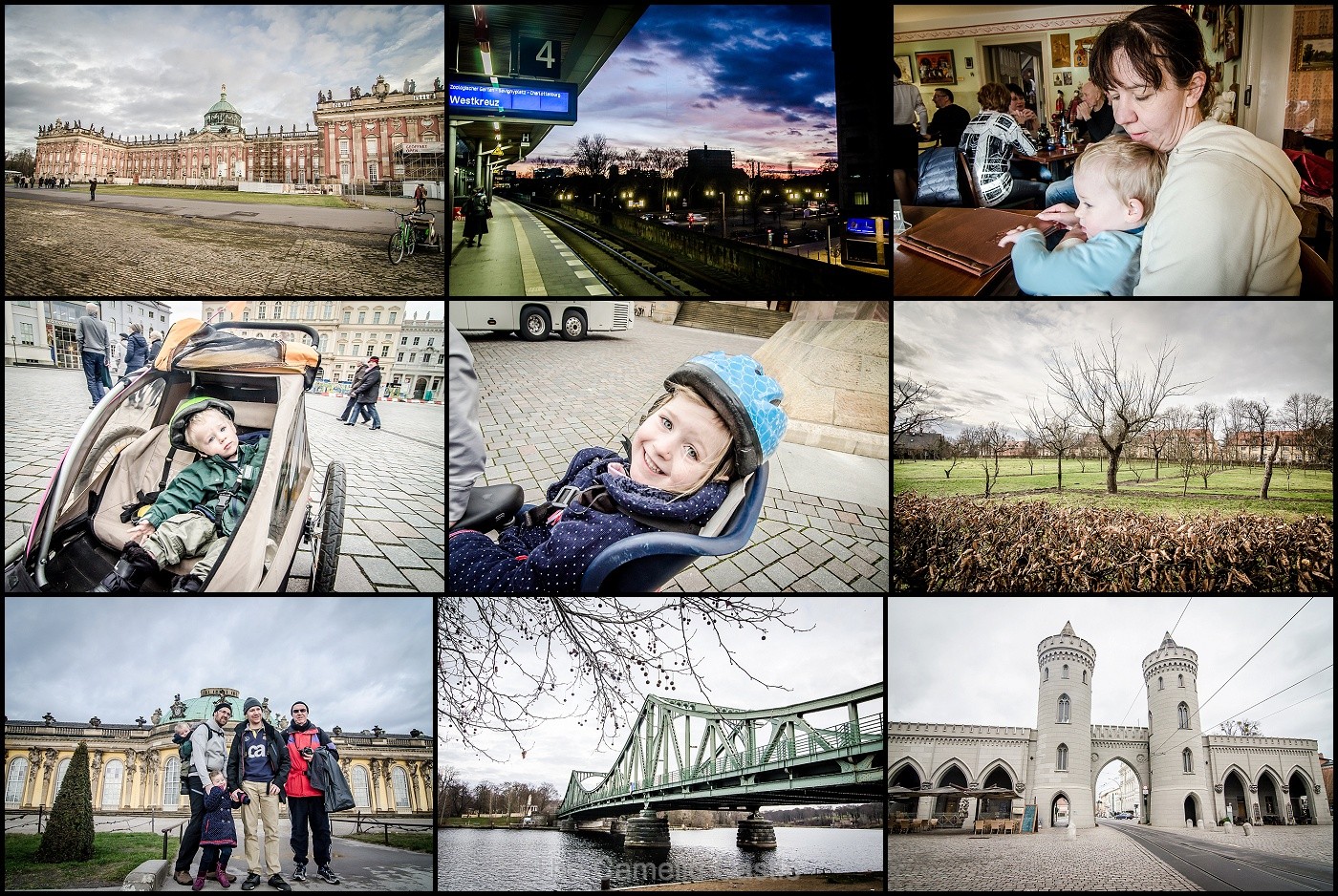 With a full day ahead of us we sprung into awakedness just on 7am, owing to all the holidays we hadn’t managed to acquire any groceries, so Anto bravely trudged out into the almost tropical darkness to see if any of the supermarkets had decided to open up. Aside from having a nice early morning walk he failed to find anything approaching an open store – luckily we had a fall-back plan of a train picnic from train-station pastries, as we have found that over most of Europe you can pick up pretty decent pastries at train stations – and if very lucky drinkable coffee to boot. As a bonus feeding the kids on the train not only gets them fed it also keeps them entertained for an amount of time. 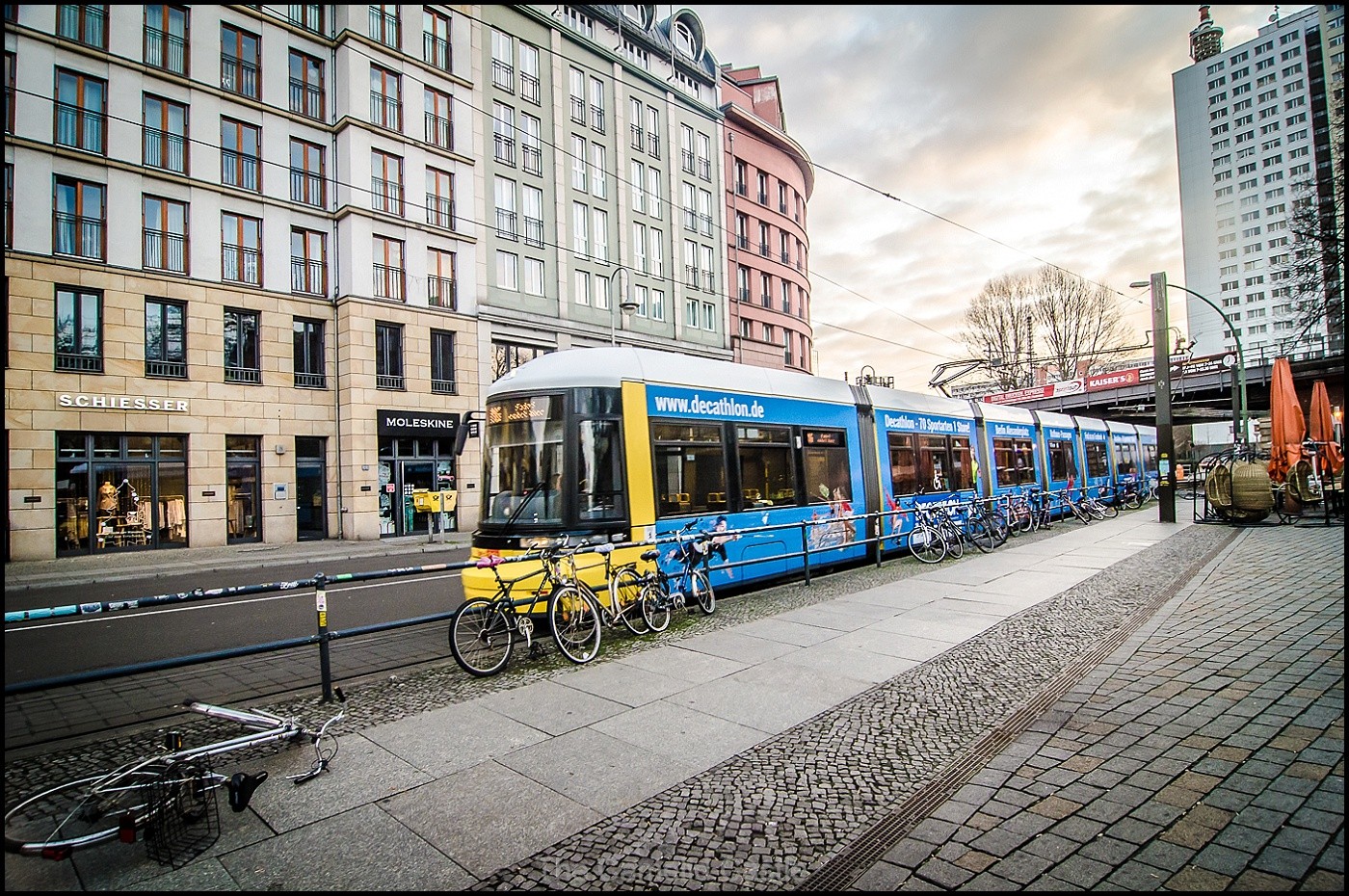 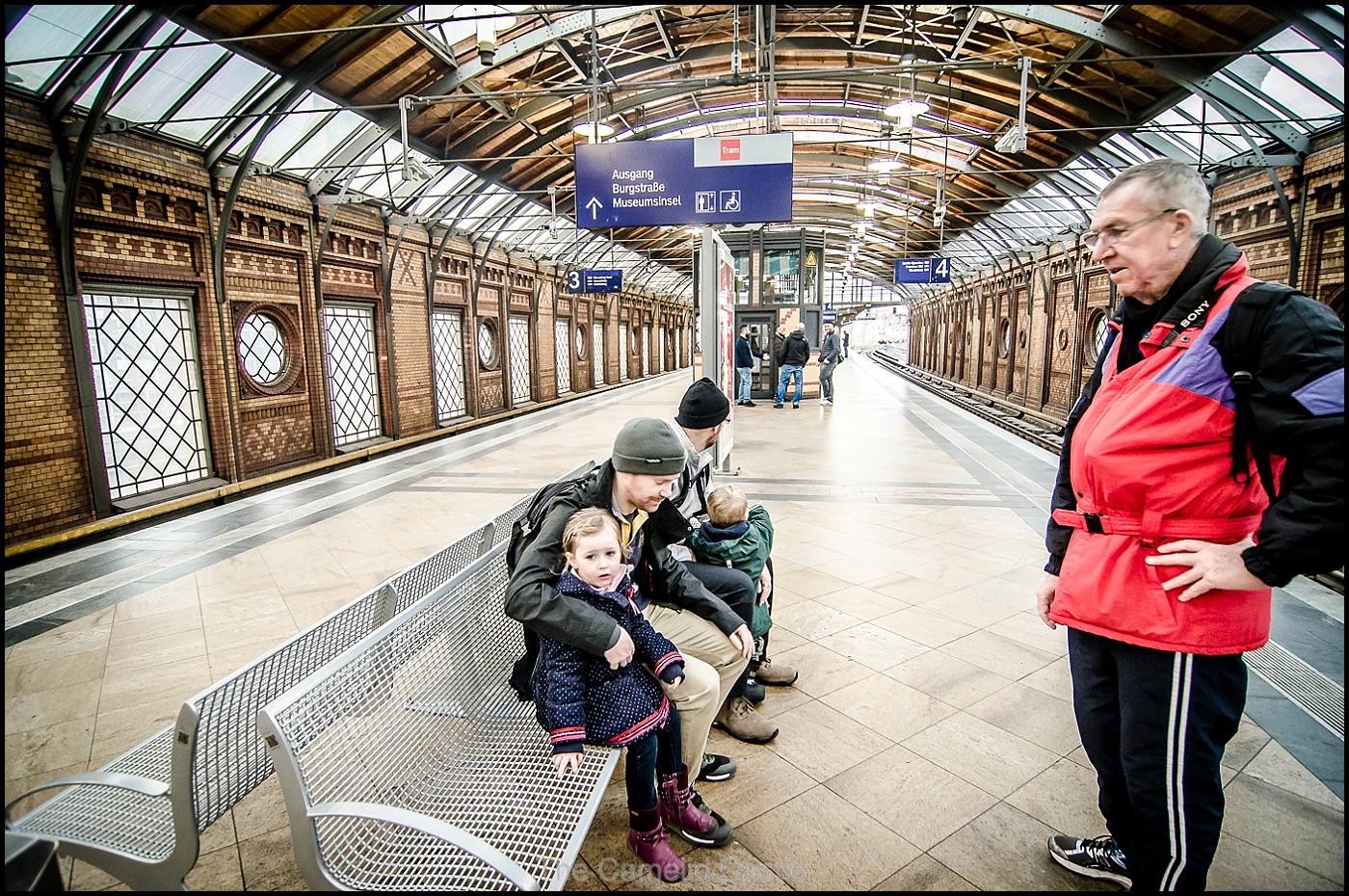 Our outing today was a fairly painless trip to Potsdam, which started with a quick walk to Naschmarkt to catch our scheduled train trough to Potsdam. Potsdam is really just an outer suburb of Berlin, a fairly painless 45 minute train ride. We were quickly deposited at our destination, ahead of time, and wandered (via a coffee shop) around to find the bike garage . The bike garage is apparently quite new – with a capacity of 500 bikes and an attached bike service station.  We met our tour guide Max Finger (apparently his real name) and had a short wait for someone to let us in to grab our bikes. In fairly short order we were all geared out and made our way back through the security gates and onto the Potsdam bike paths.

Once again we had great weather – when booking all the tours we were not sure we would get to ride around Potsdam – this time of year it in theory should be cold and rainy if not actively snowing. The tour we booked was being run as a private tour, as it’s normally too cold and snowy to run scheduled tours. However due to the (presumably global warming induced) winter heat-wave we were sitting in almost 10C and a lovely day for a ride. Once again we had decided to separate Soren and Astrid, with Nic being volunteered for the task of dragging the (quite luxurious) trailer around and with Anto chauffeuring around ‘queen Astrid’ for the day. After 20km of riding 3 days prior (dragging Soren in a trailer) and over 15km of walking pretty much every day Nic’s legs were rather sore!

The bike tour started out with us flying over the Havel bridge before having a look at some of the examples of ‘recreated’ architecture in the city. As Potsdam was pretty well destroyed during ‘the war’ most of the historical buildings were rebuilt – mostly with modern internal structures. Some of the soviet area buildings (including a high school) really highlighted how different things were under the eastern block regime. The communist buildings were often adjacent to the newer (and prettier building) and the contrast was quite interesting, and very stark. 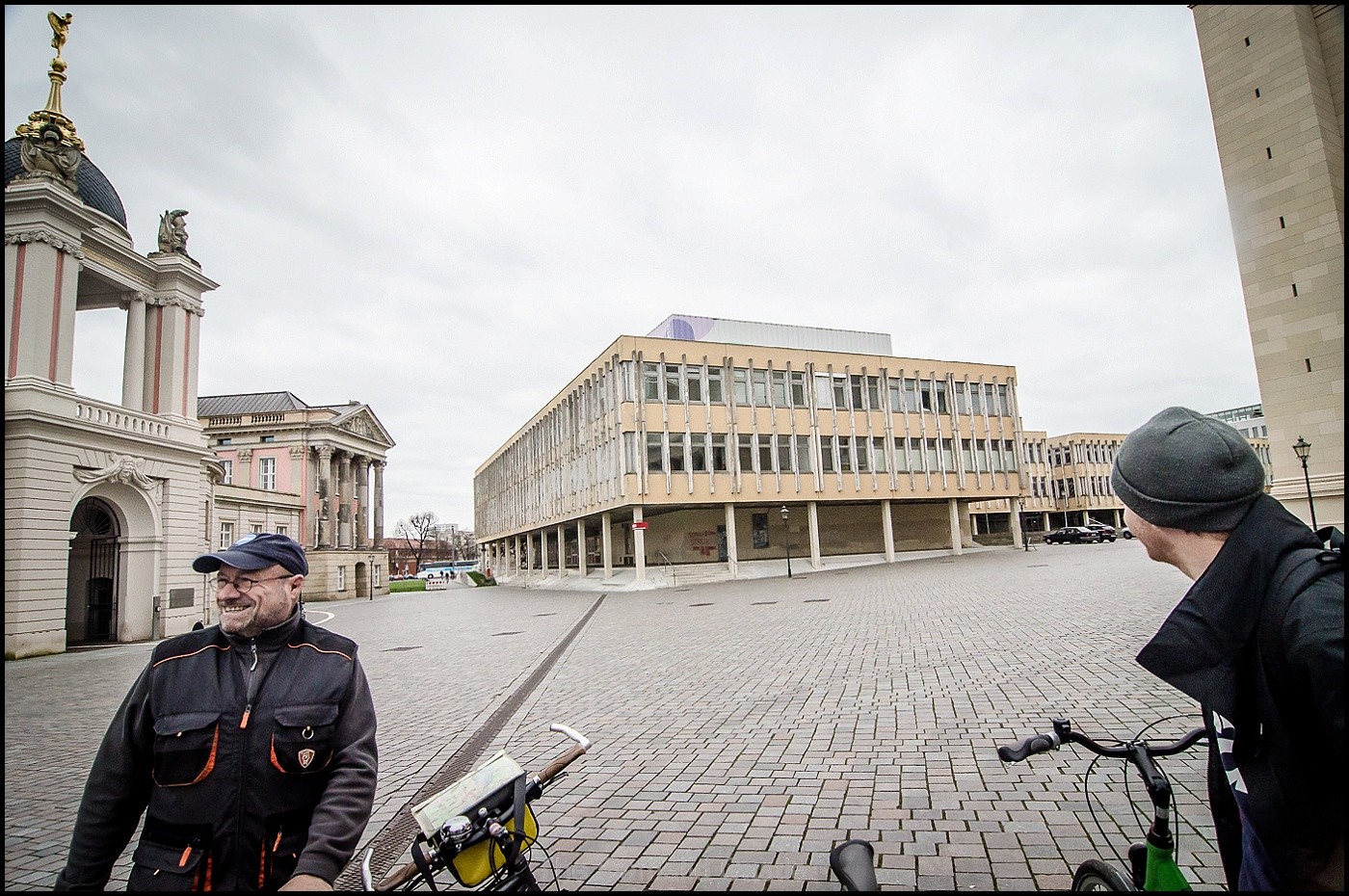 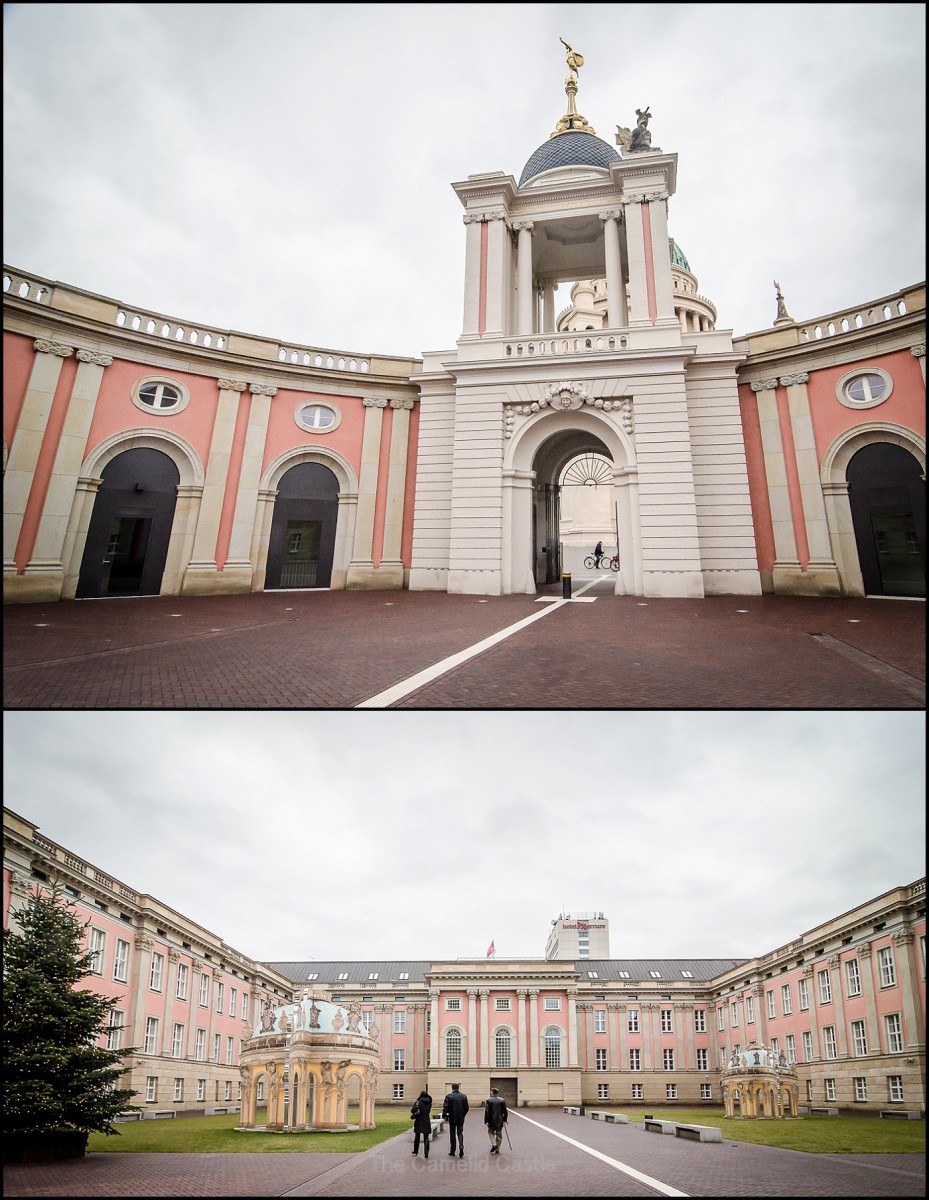 We then rode through ‘old town’ and the Dutch quarter of Potsdam with its very Amsterdam architecture and some pretty churches. 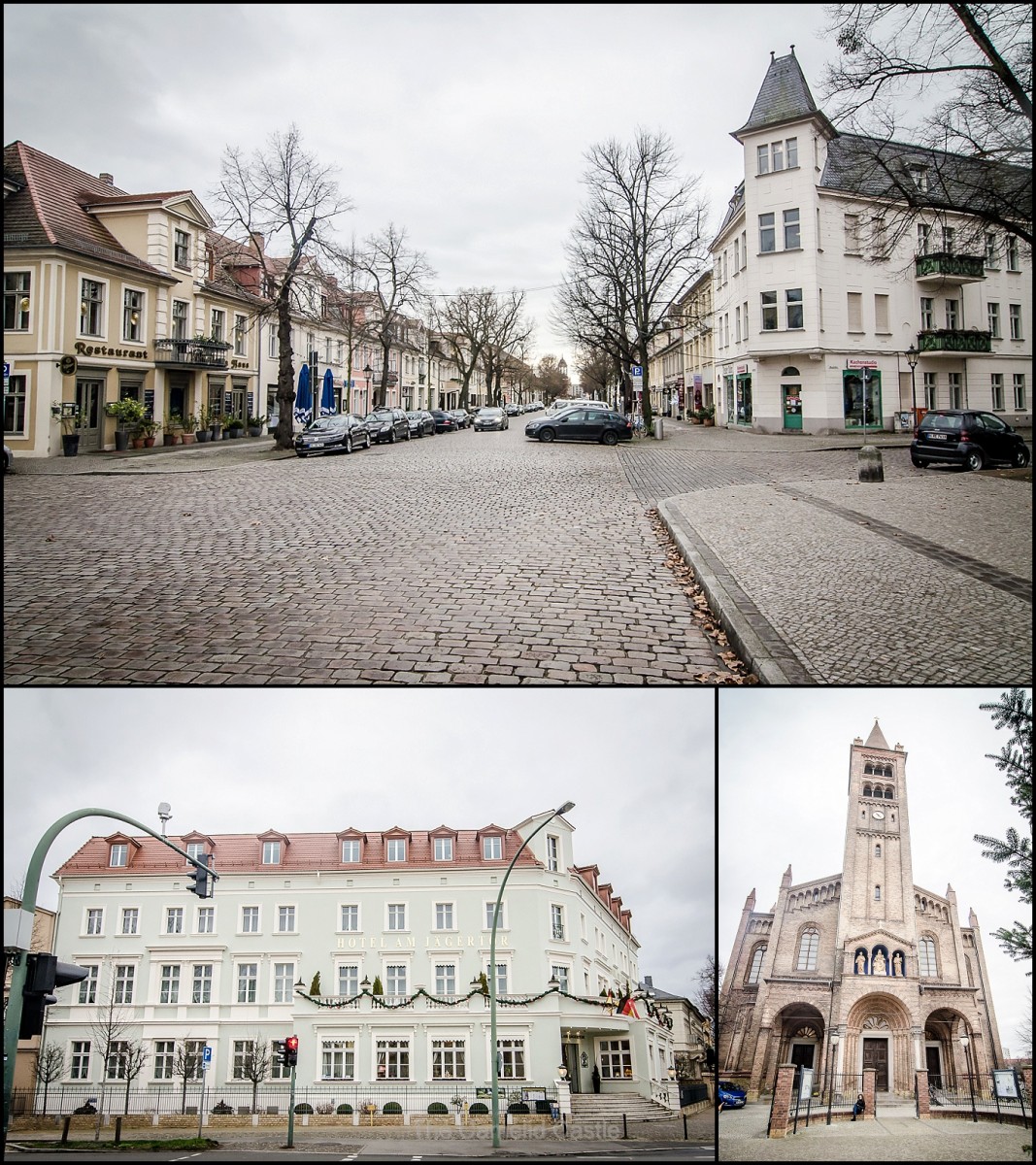 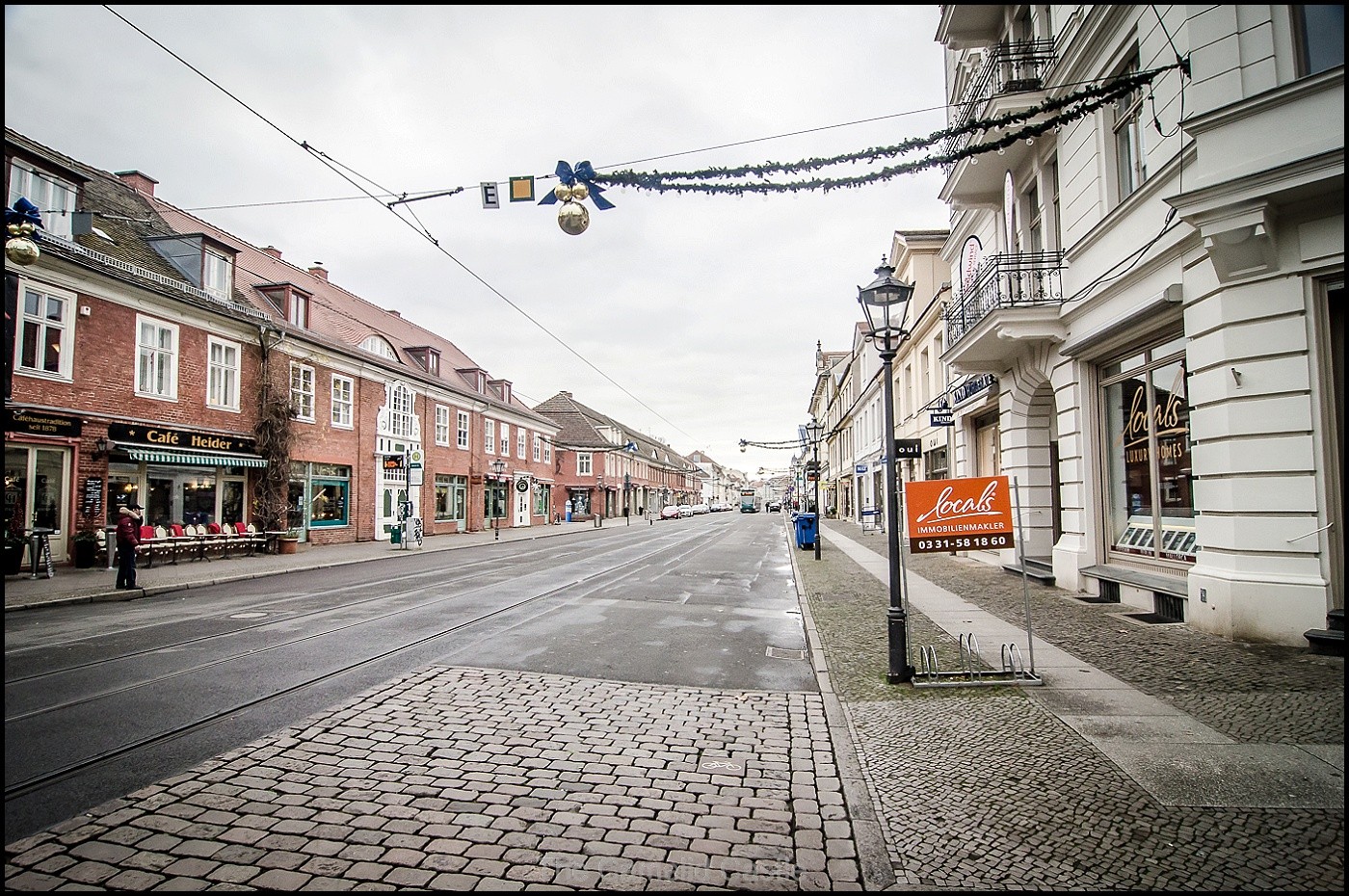 We then made our way through several gates, that seemingly had no relationship to any architecture around them, but were quite pretty.  The final of which was the Brandenburg Tor, learning that pretty much every city in the region had a Brandenburg Gate, the Potsdam one was somewhat more subdued than Berlin’s. 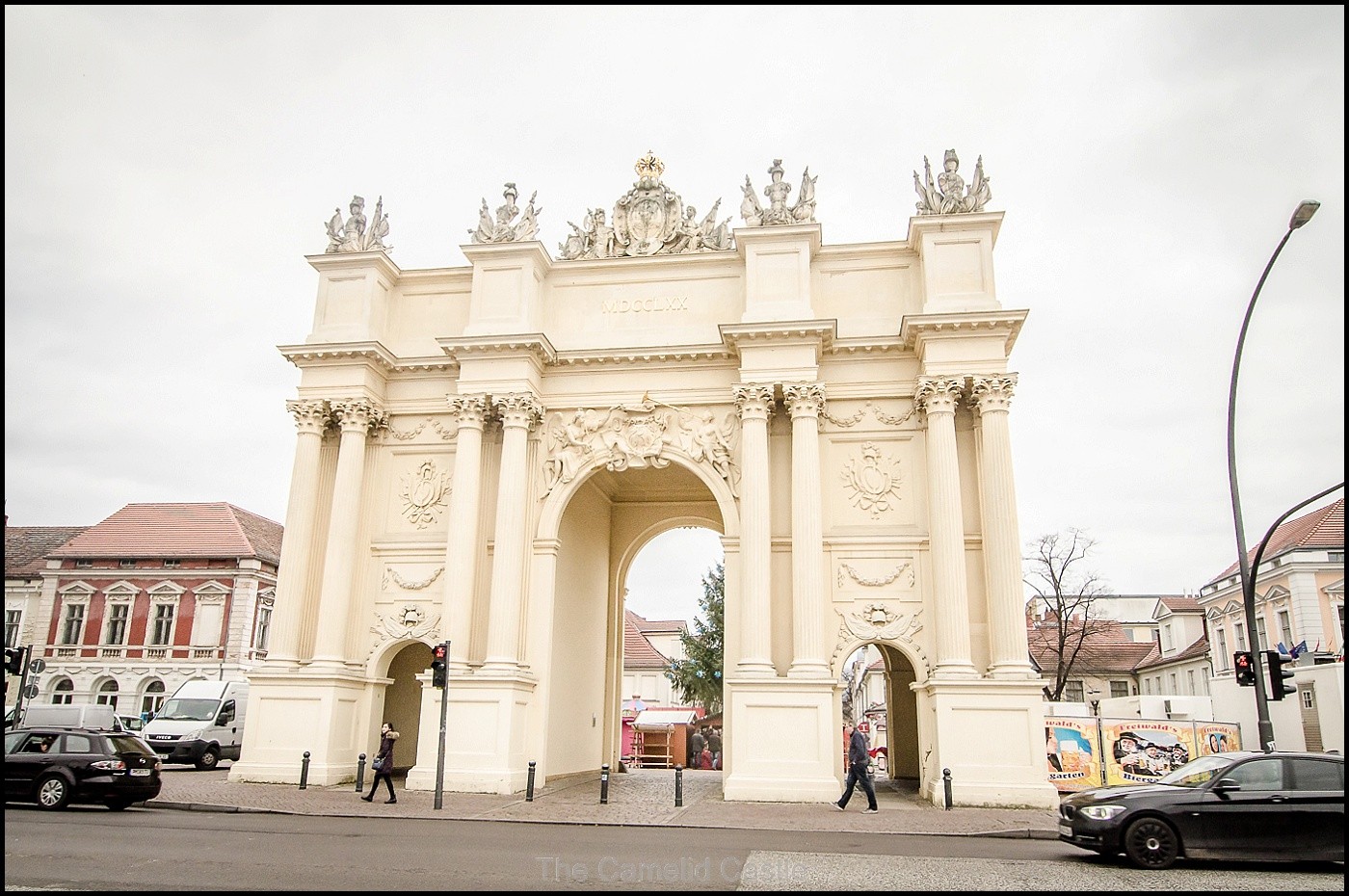 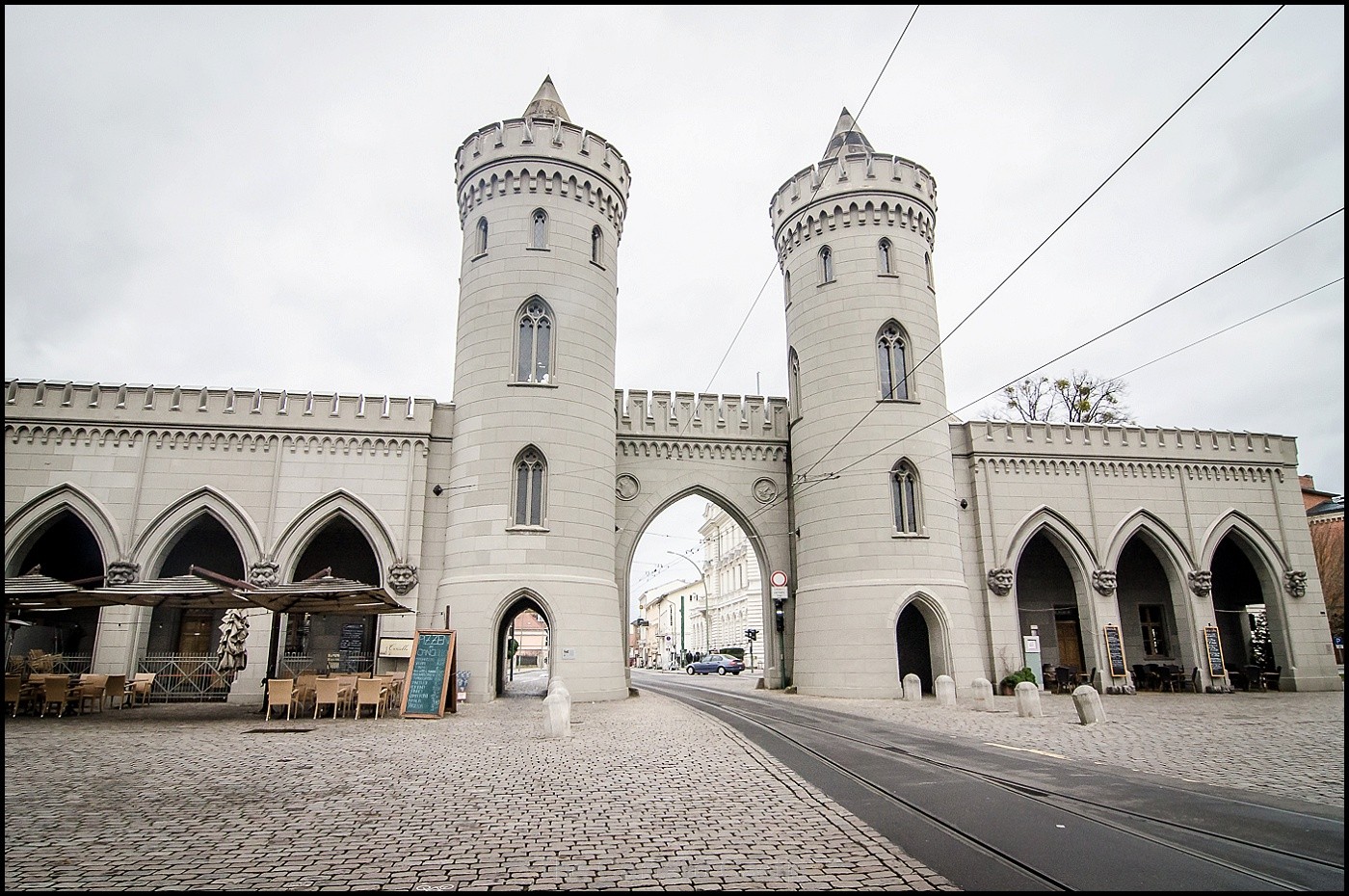 Then we rode back through old town and past a Christmas market (yes there are really hundreds of them). The kids were annoyed this one was not yet open! 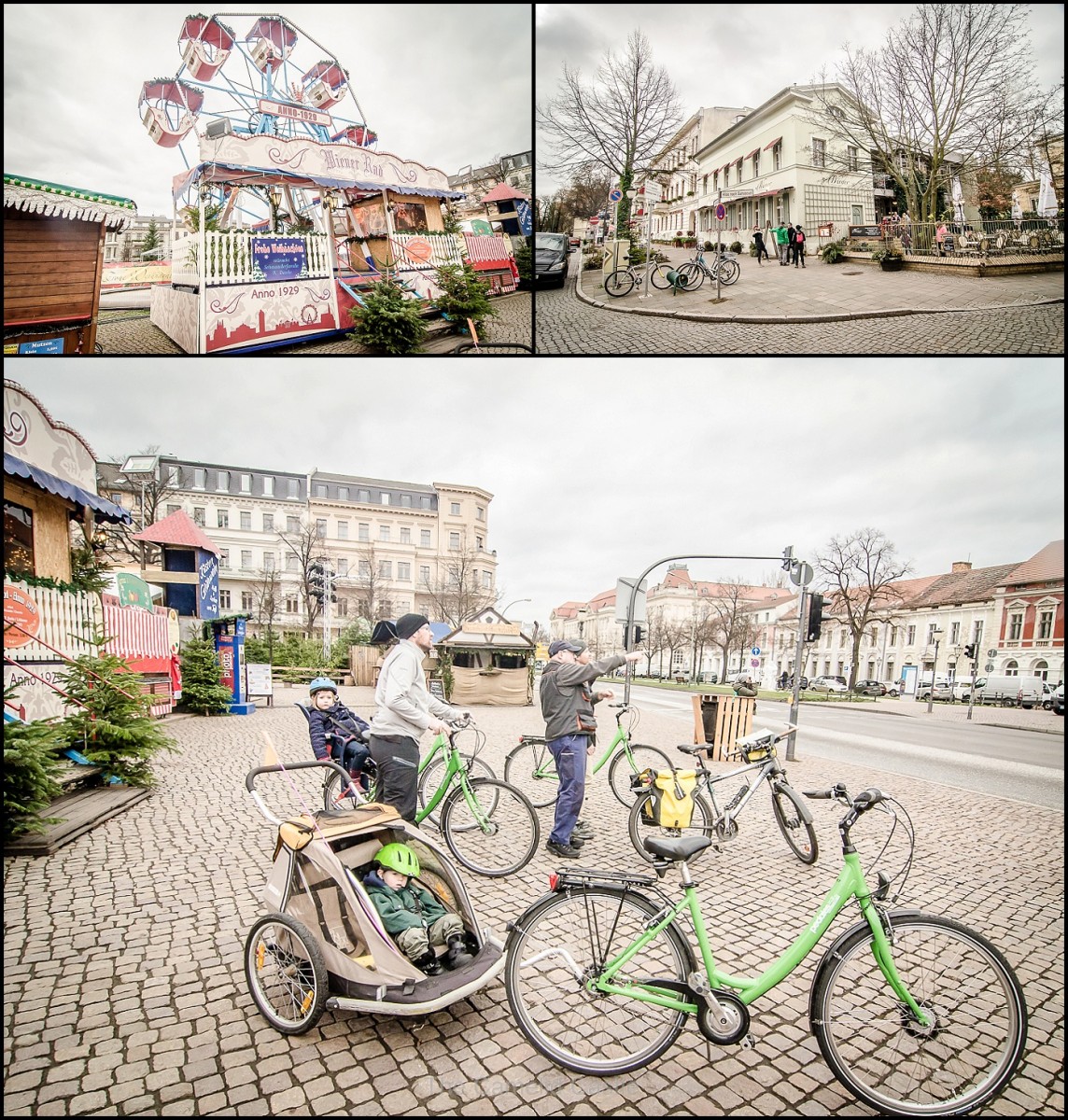 We fairly quickly made our way through to Sanssouci Park, the enormous park surrounding Sanssouci Palace and containing several other buildings.  If you want to see much of the park, doing it on a bike is preferable, it would take a lot of walking! Before too long Soren is lulled to sleep by the riding and stays that way for quite a while. We rode past the front of the palace, but no bikes are allowed inside the inner garden gates so we took some photos from afar and continued with our ride before looping back later for a closer look. 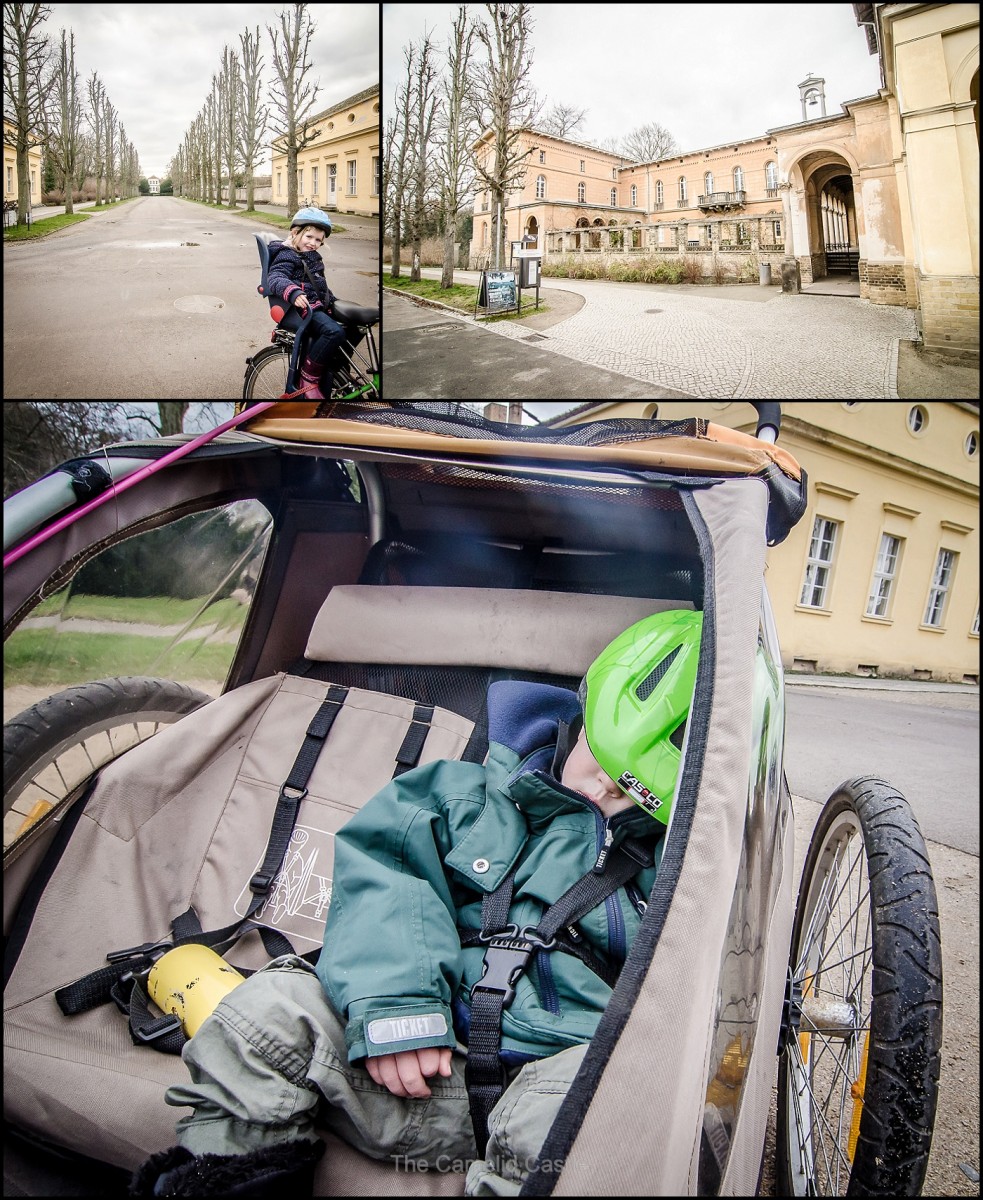 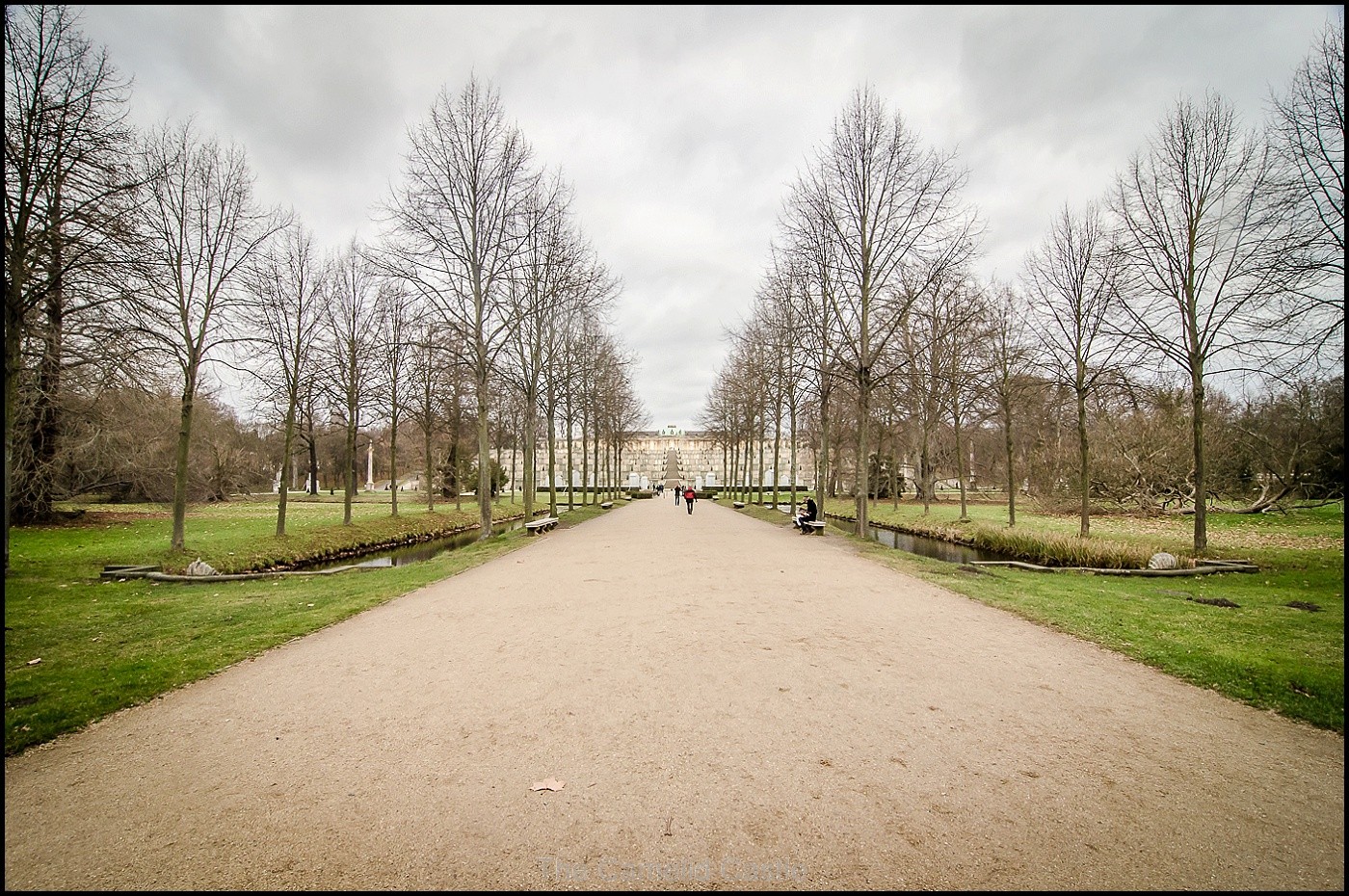 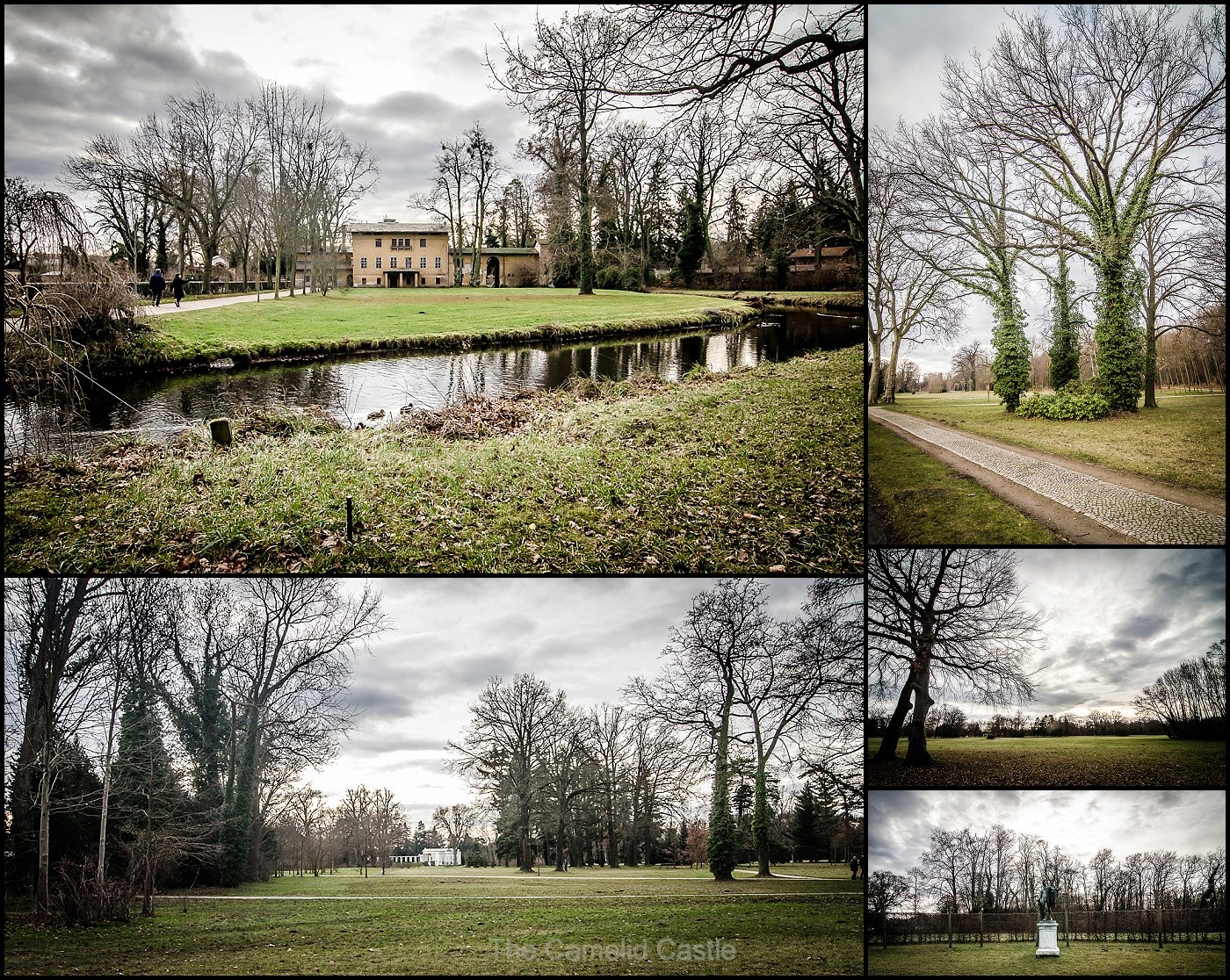 Then it was on through the expansive Park and past the ‘Chinese house’. Apparently all things Chinese were considered classy – so a Chinese looking building was built, complete with ‘Chinese statues’. Unfortunately it appears that no-one involved in the process actually knew what a Chinese person looked like so they created statues that looked like all the others, however with ‘Chinese’ eyes. Of course all the statues had their Winter covers on so we didn’t get to see them up close.

Next we rode through the Neues Palais, which was built for Fredrich the Great, apparently for an unknown amount of money as he didn’t want people to know how much it had cost. The Palais it’s self was fairly un-inspiring, having been built quickly and ‘cheaply’, with tricks like bricks painted onto a concrete base to speed the process up. 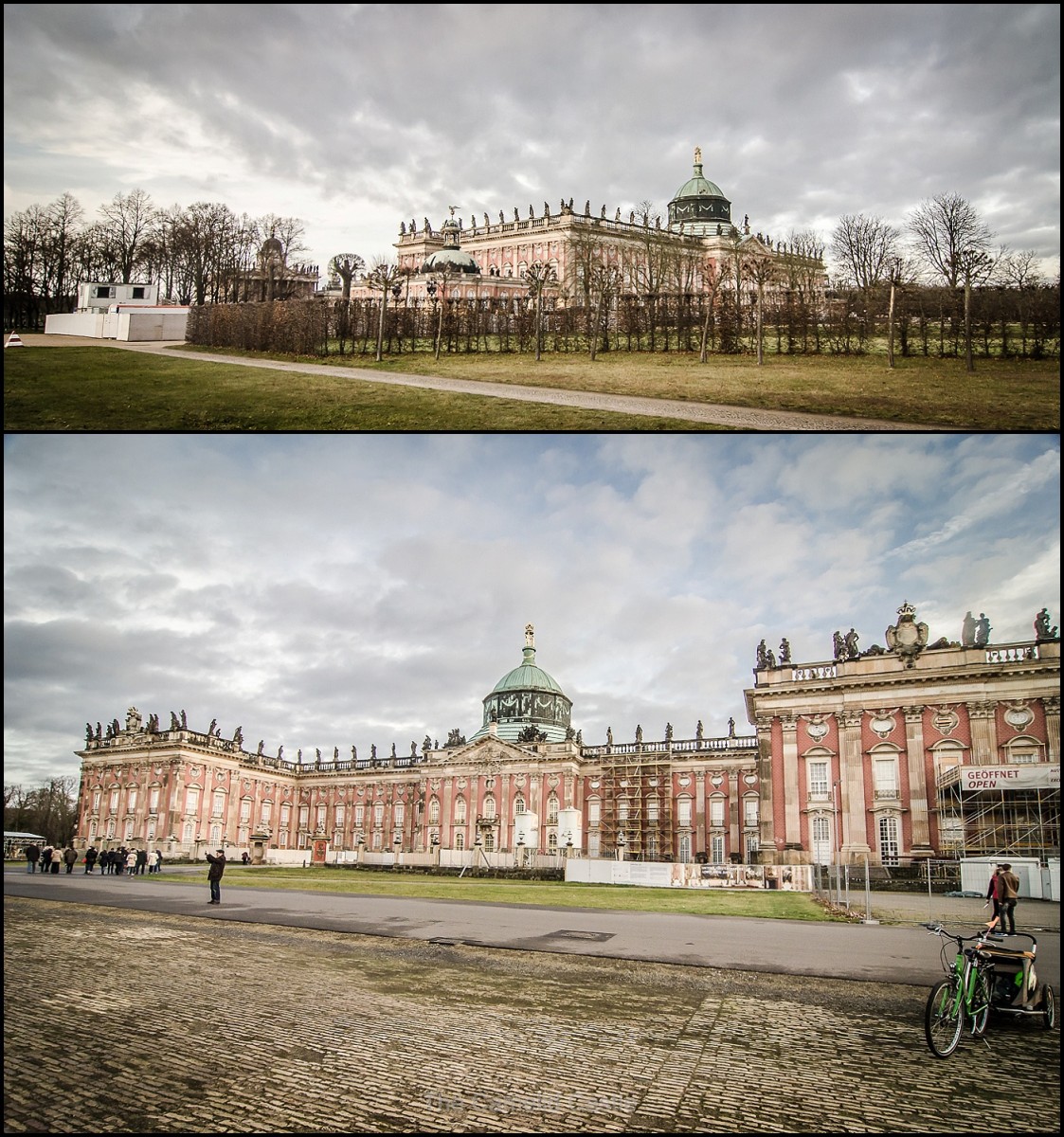 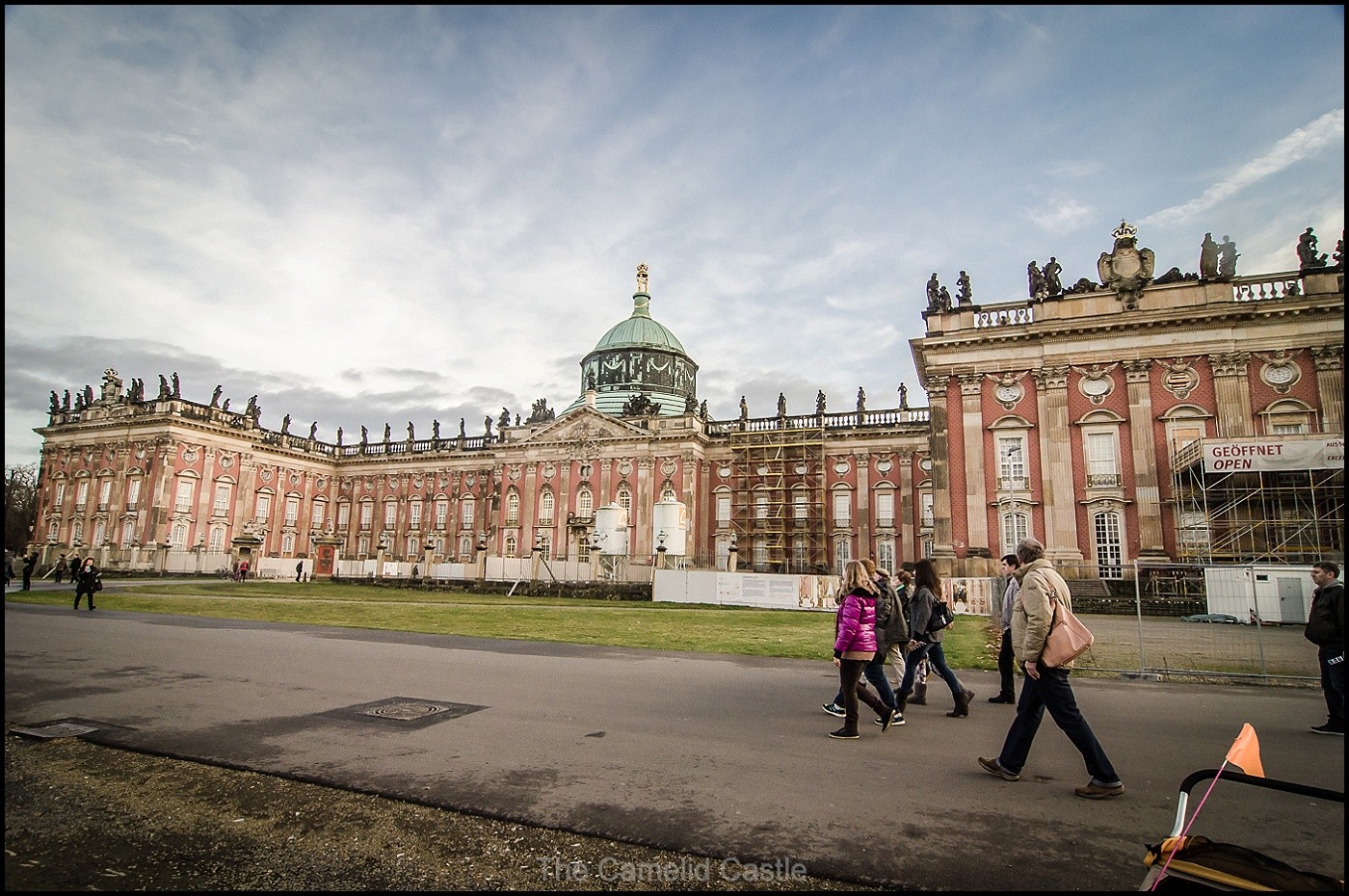 What was somewhat more impressive was the servants quarters and kitchens on the other side of the path. The palace was mostly used for parties and entertainment – a good deal if you can get it. Yes these buildings are purely for the servants and a kitchen! 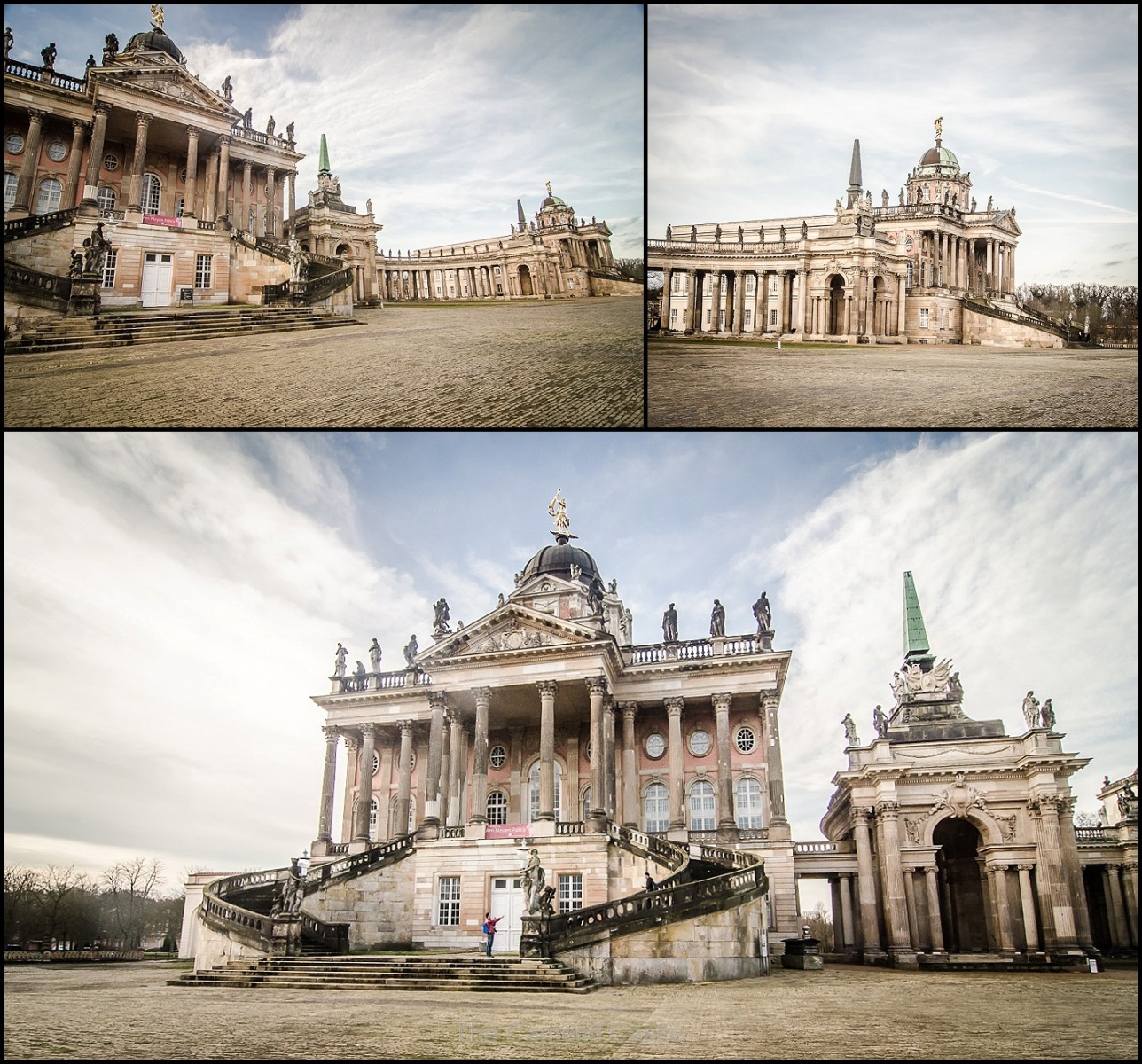 Interestingly a fair amount of the statues and carvings were down from the buildings and being restored – which provided a pretty good view up close. 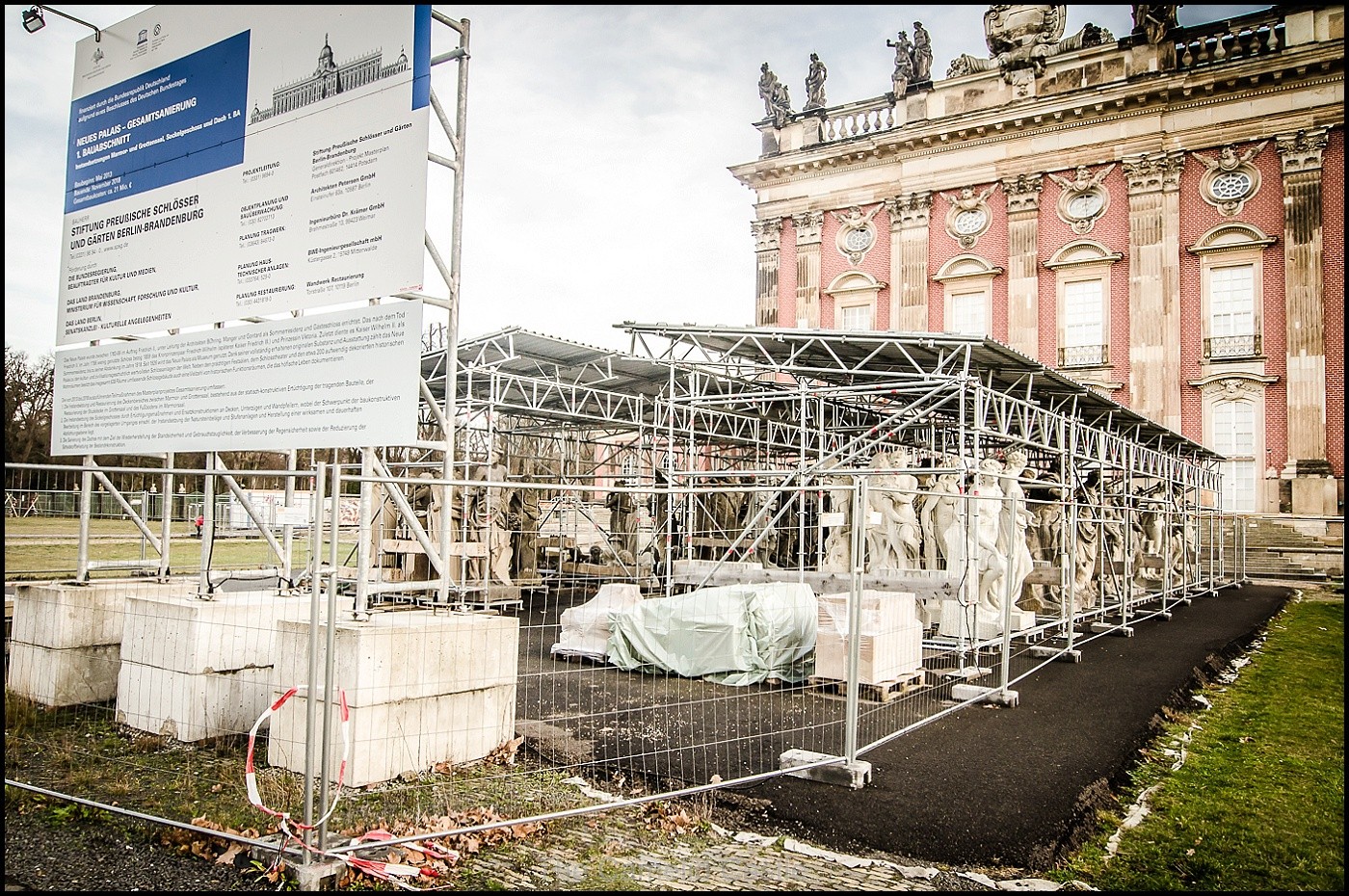 We rode past a number of other ‘minor’ palaces, including the extensive orangerie. Which as expected had little to see in Winter! 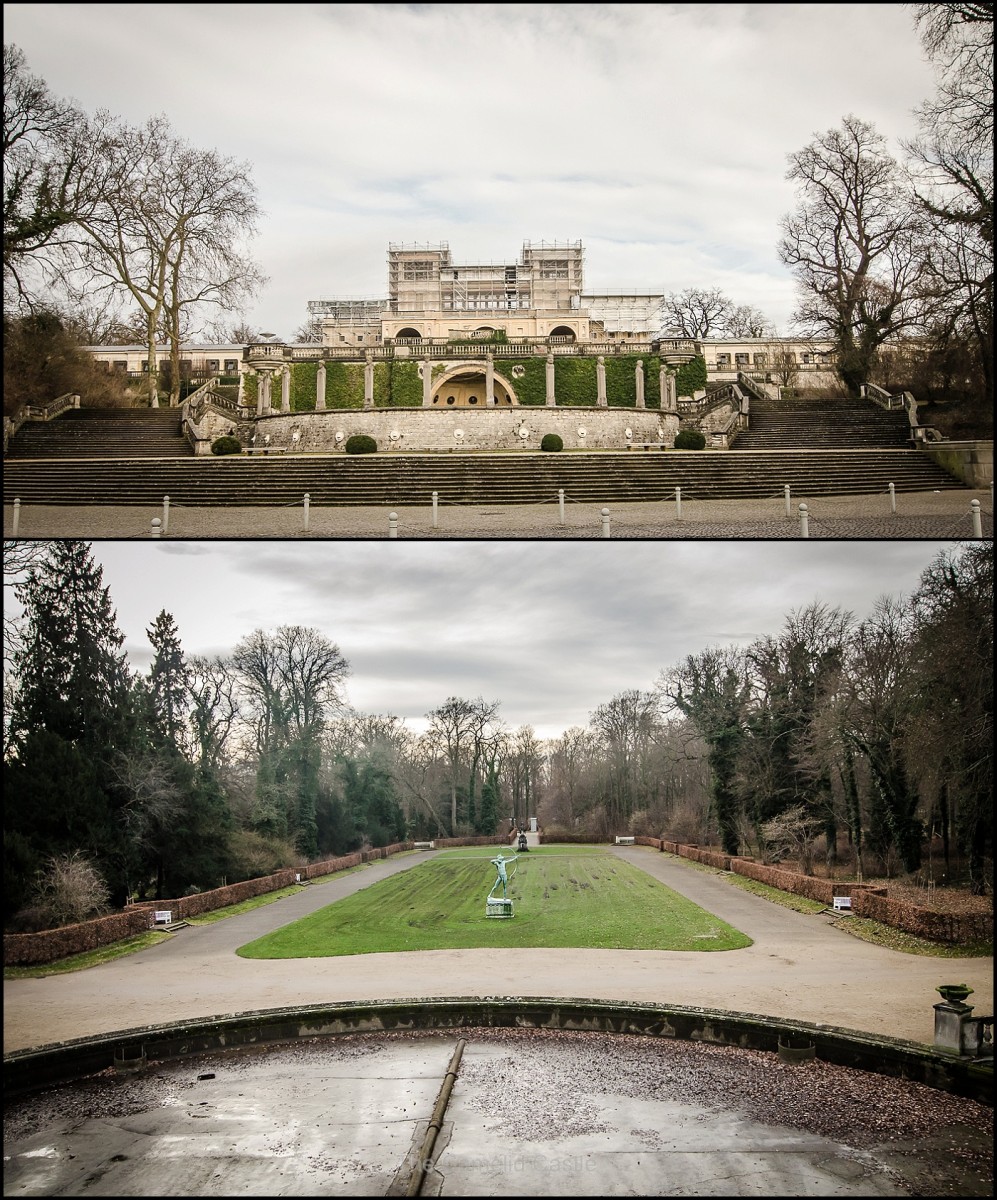 We had now circumnavigated the gardens and were around the back of Shloss Sanssouci, where could park our bikes (adjacent to a windmill and busker) and head for a walk past the Shloss and check-out the fairly impressive views over the park and gardens. We also got to see where Frederich had a dedicated graveyard for his dogs.  Right near the palace. The mistresses and wives weren’t given the same importance! 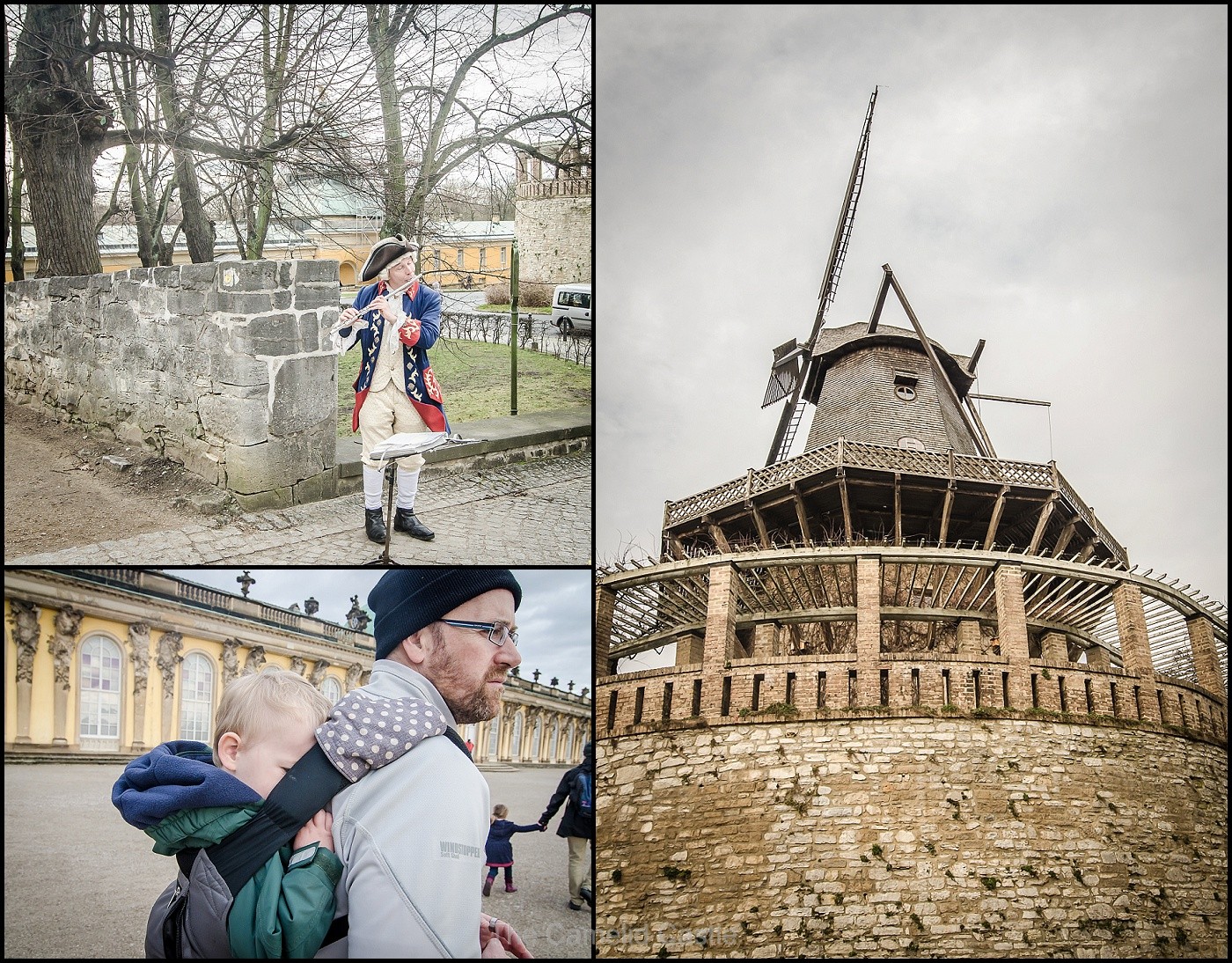 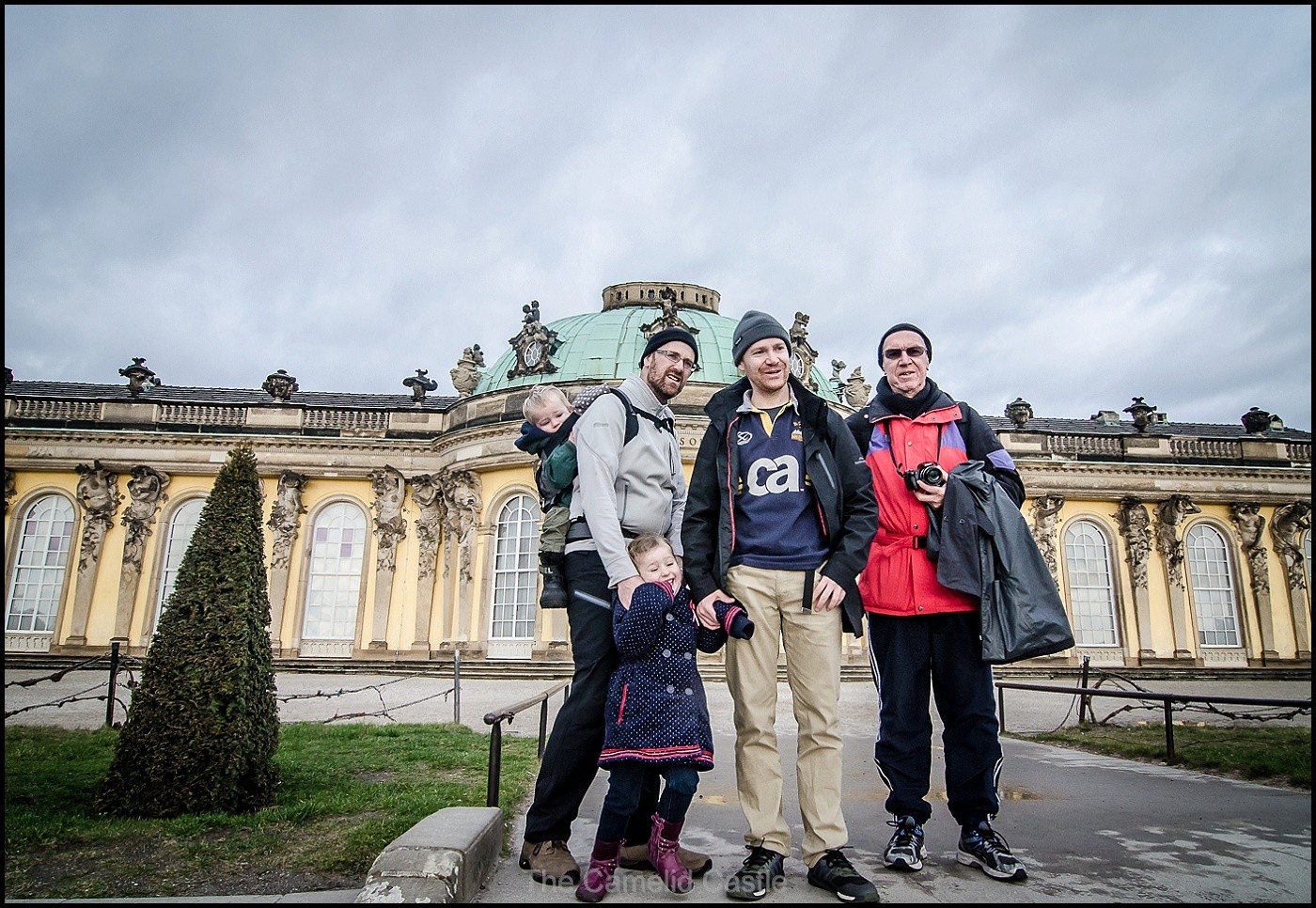 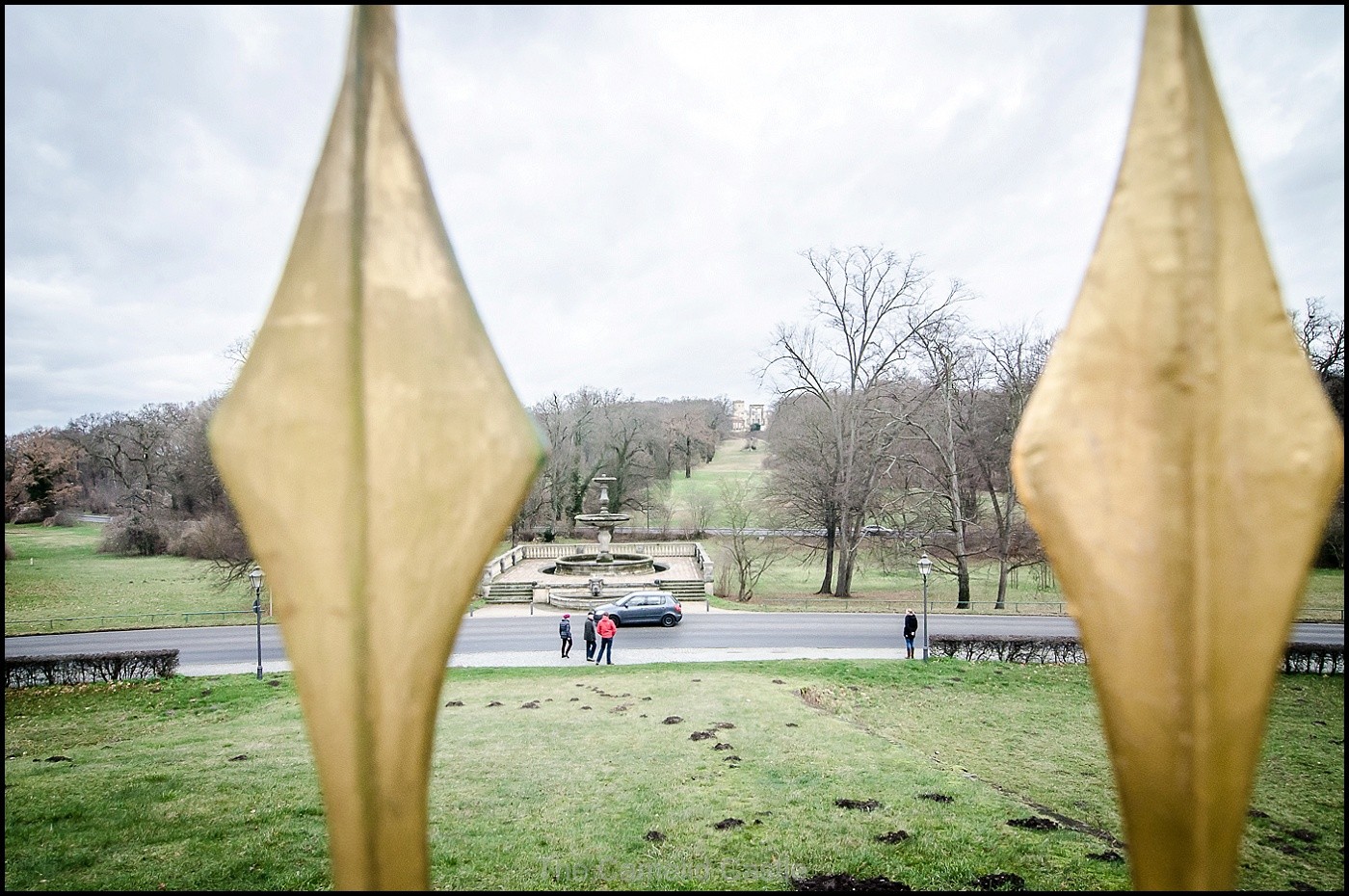 We ended up in the ‘Russian quarter’ for lunch – which it turned out were about 13 houses covered in wooden planking to look like traditional Russian houses – apparently the rest of the buildings were exactly the same as all the others built around the same time. 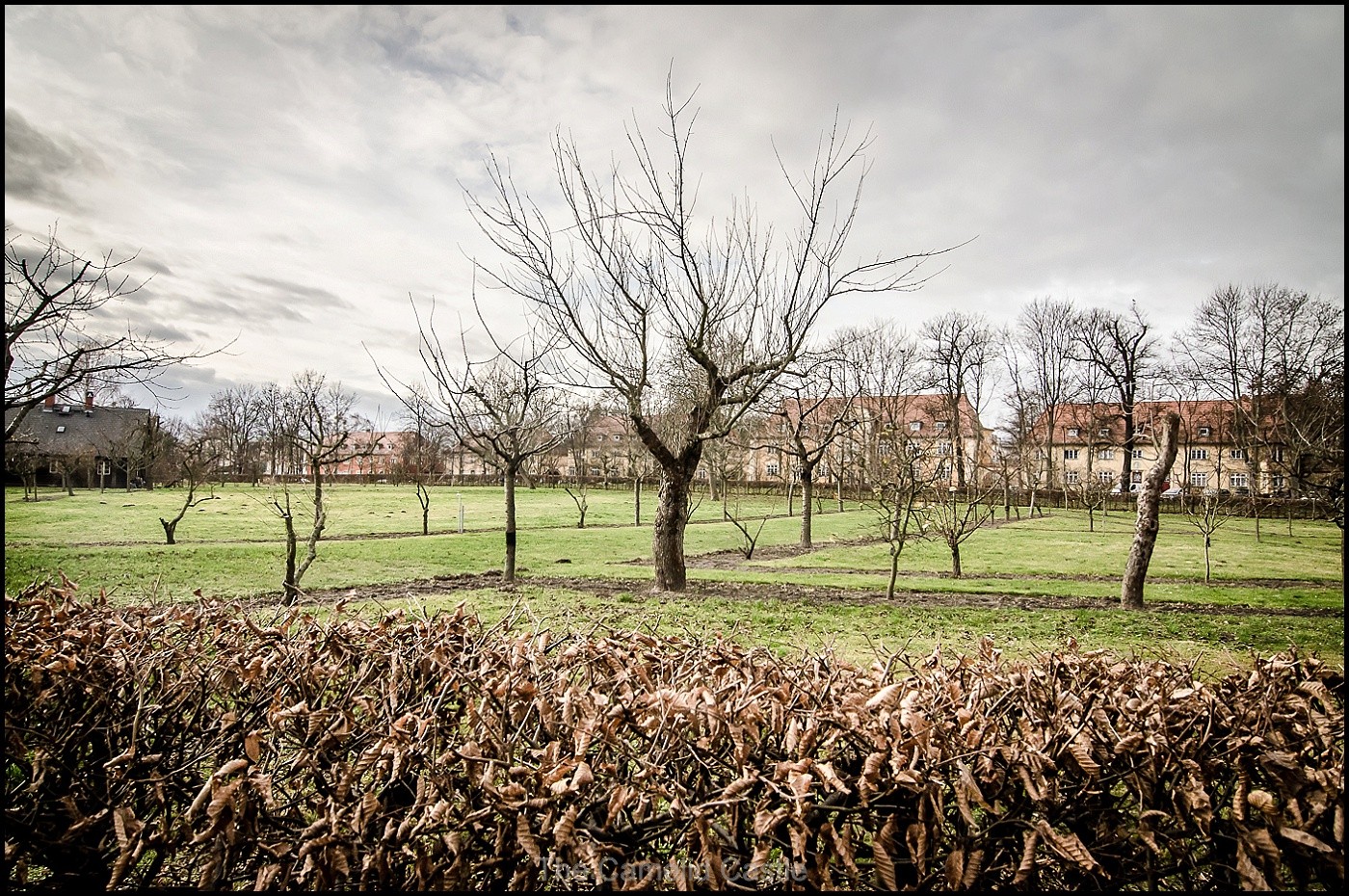 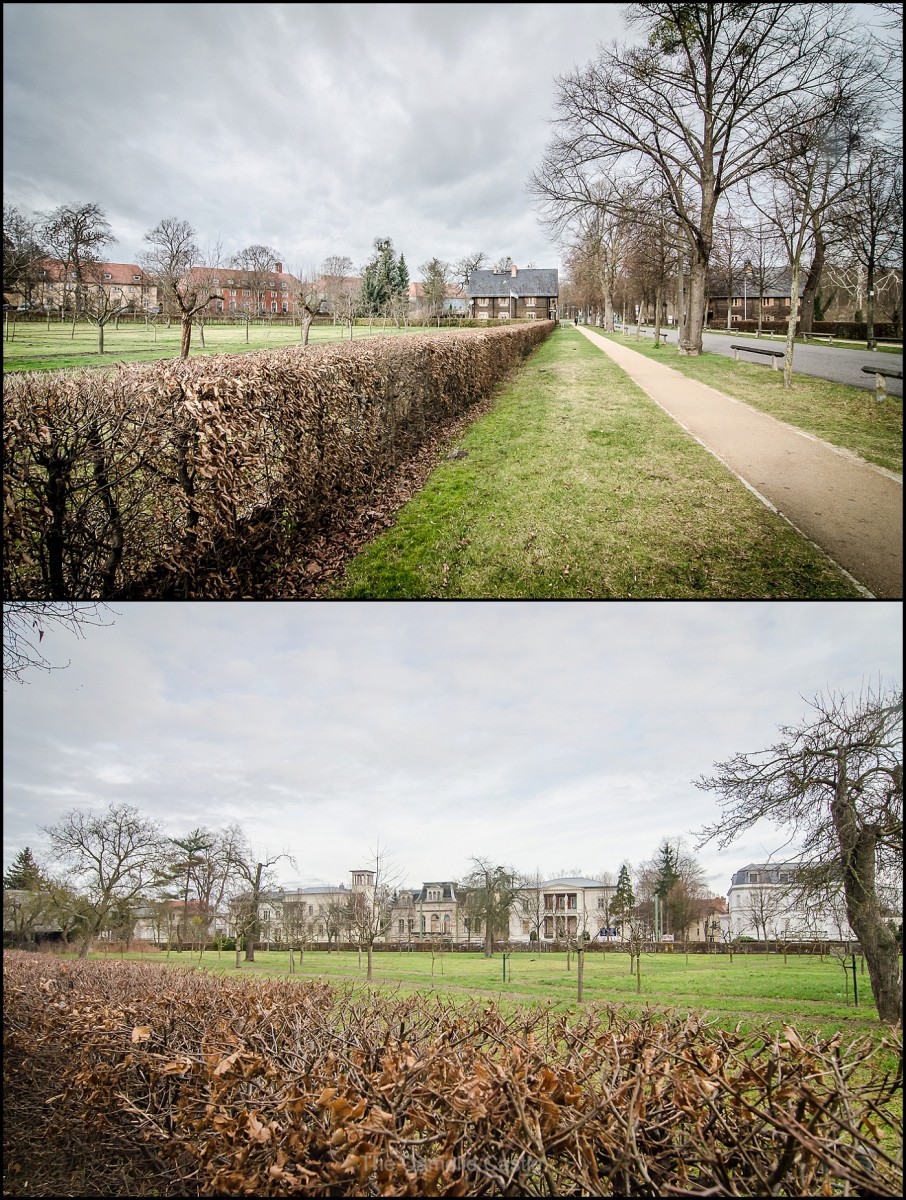 Despite German descriptions of Russian food we managed to get lunch ordered, with the boys having a pretty decent borscht (complete with bits of meat and sausage,) Nic having a plate of pickled veggies and the kids having dumplings, with some kind of unidentifiable filling. It was all washed down with hot chocolate or birch lemonade for the more adventurous. Somehow the kids ended up with a traditional Russian honey cake – which not surprisingly was a fair hit. Sadly our lunch was soon over and it was time to get back on the bike, not before Soren spotted a couple of fake cats ‘sleeping’ on the stairs – which required significant patting and cuddles on the way out.

Just after lunch we wandered past some old KGB buildings, including a detention prison and the local KGB office, both places that it looked like you wouldn’t want to spend too much time. They were adjacent to a street of very expensive houses and embassies!

After lunch we moved onto Schloss Cecilenhof, because you can’t have enough Palaces in one area. Including views up to Fredrich’s “mistress’ house” – which while not officially a palace was a wooden building painted to look like all the other palaces, and conveniently just down the water from his official residence.

We then proceeded around the waters edge to the ‘Bridge of Spies’ (yes the same one from the movie) which was used as recently as 1986 to transfer prisoners between the East and West. It’s a beautiful bridge and now even more famous…. several of us watched the movie on the flight to Europe. Clearly research for the trip! 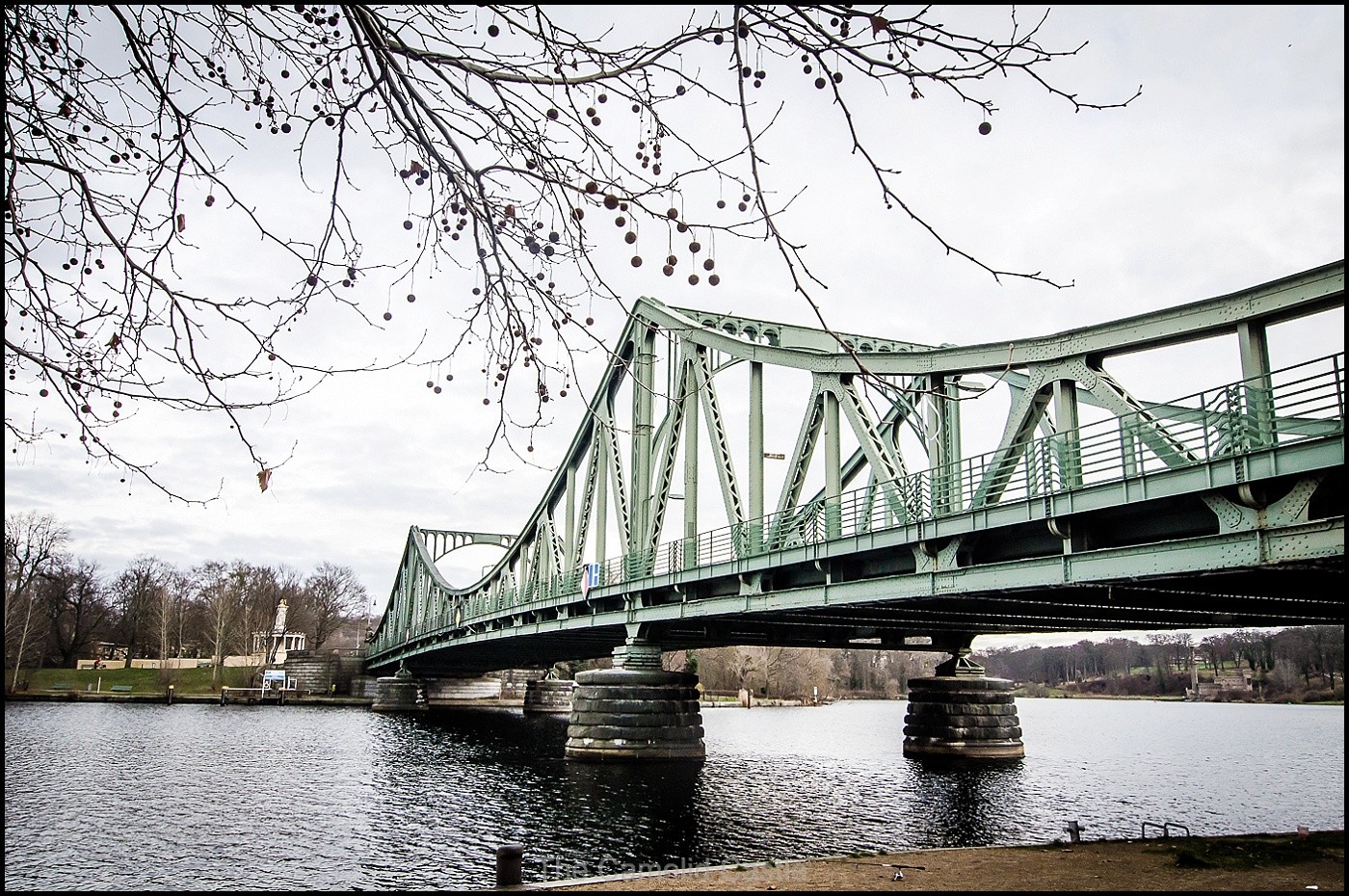 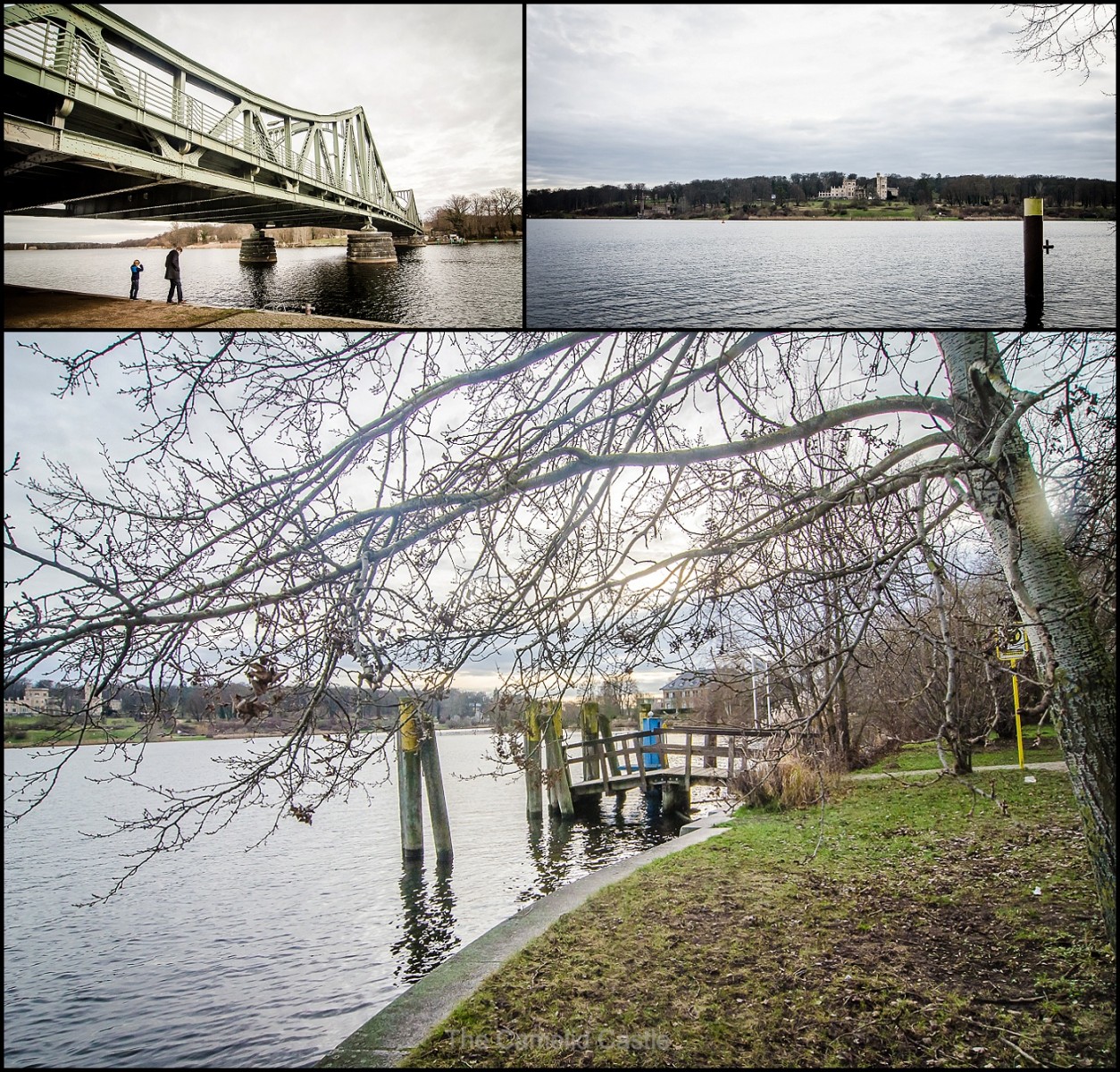 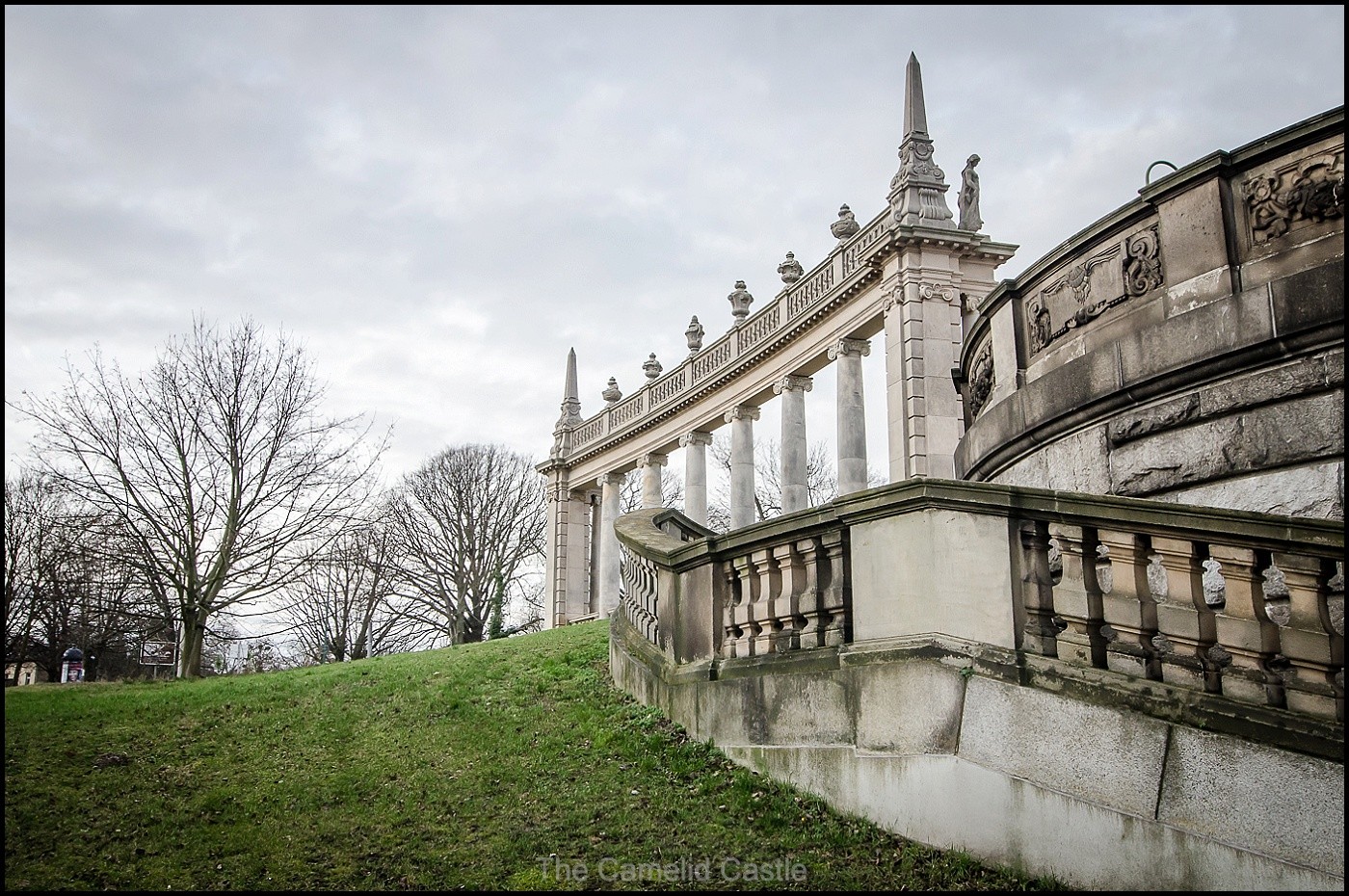 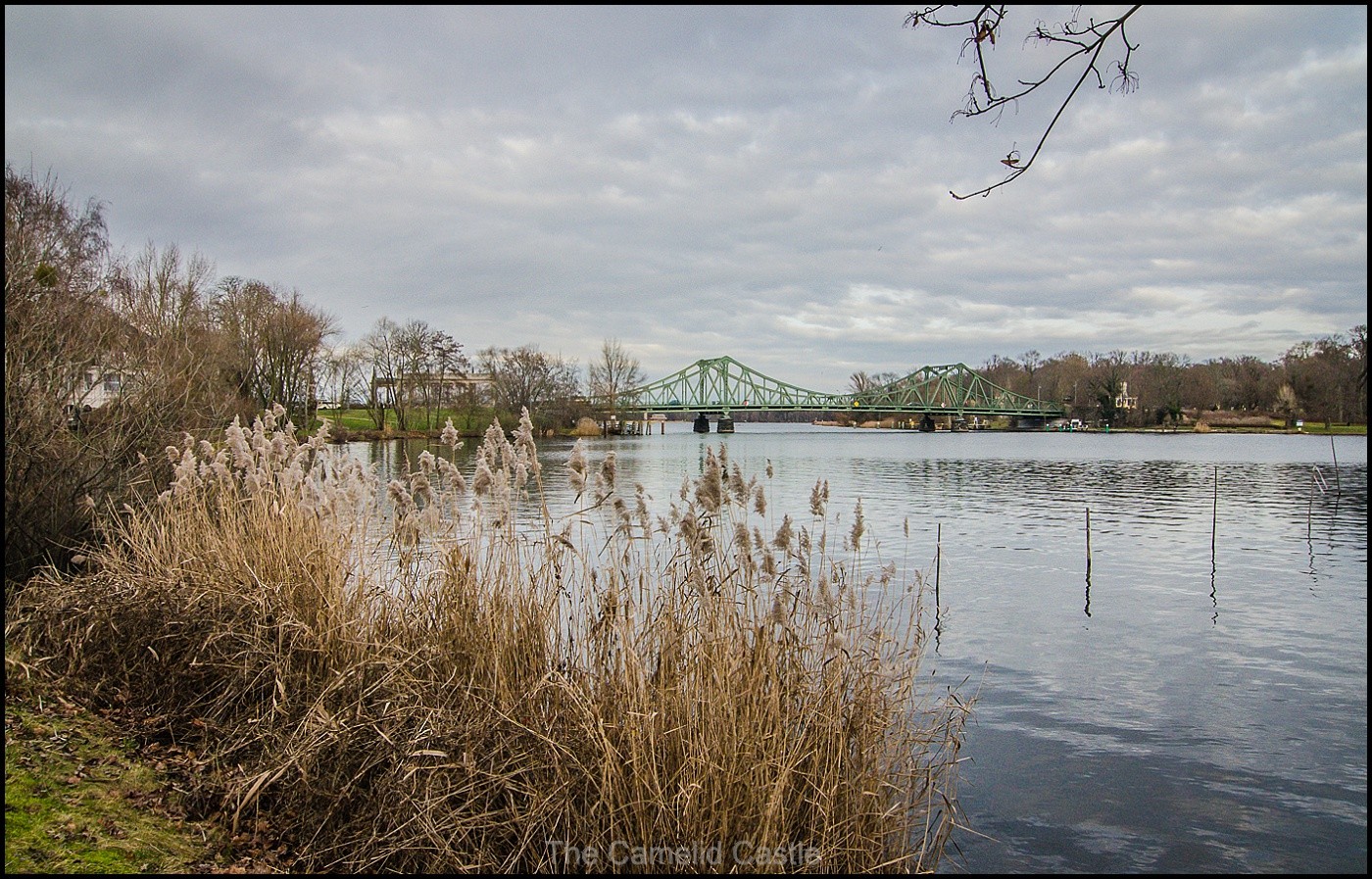 It was then a fairly easy ride around the water, past the theatre and cultural district (where there was a boat docked called the John Barnett (relatives will understand the reference!). 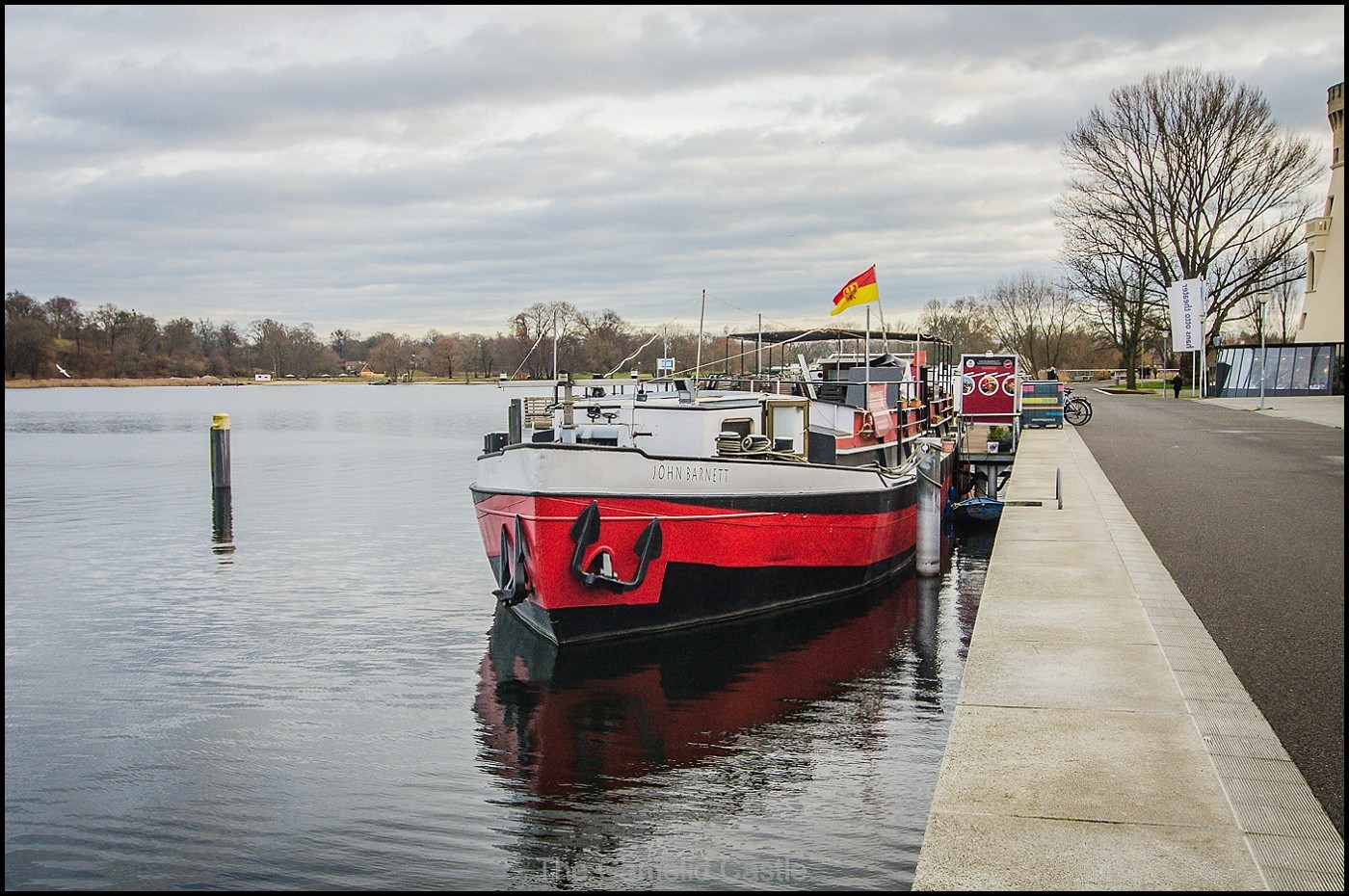 Before Nic, with very tired and sore legs after way more riding dragging a trailer than she was used to, bravely dragged the trailer up a couple of hills to cross the bridge back to the train station side of the water before a pretty easy ride back to where we started, albeit 20km and 4 hours later.

After the bike tour we caught a tram into the old town, where yet another Christmas markets was discovered, these ones where quite large and included a number of different shops, including some selling warm hats and ladies scarves. 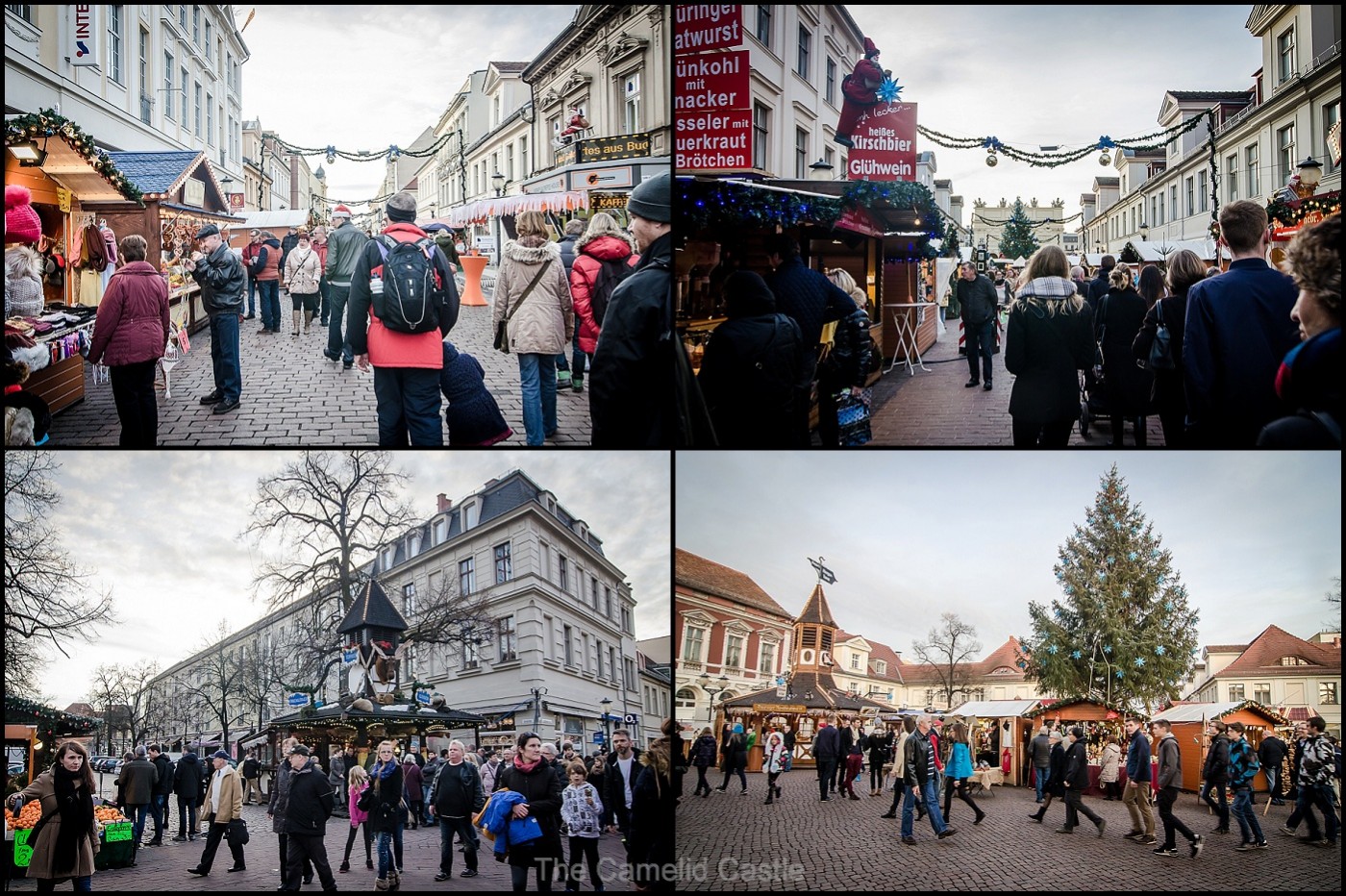 Given Anto had temporarily misplaced (OK lost) his ‘Paris hat’ a replacement was procured, along with a warmer beanie for Nic. Aside from that any residual cold was warmed away with an amaretto fortified gluhwein. After a little more wandering we caught a tram back to the train station and a pretty boringly efficient train back to Berlin, as the sun set. 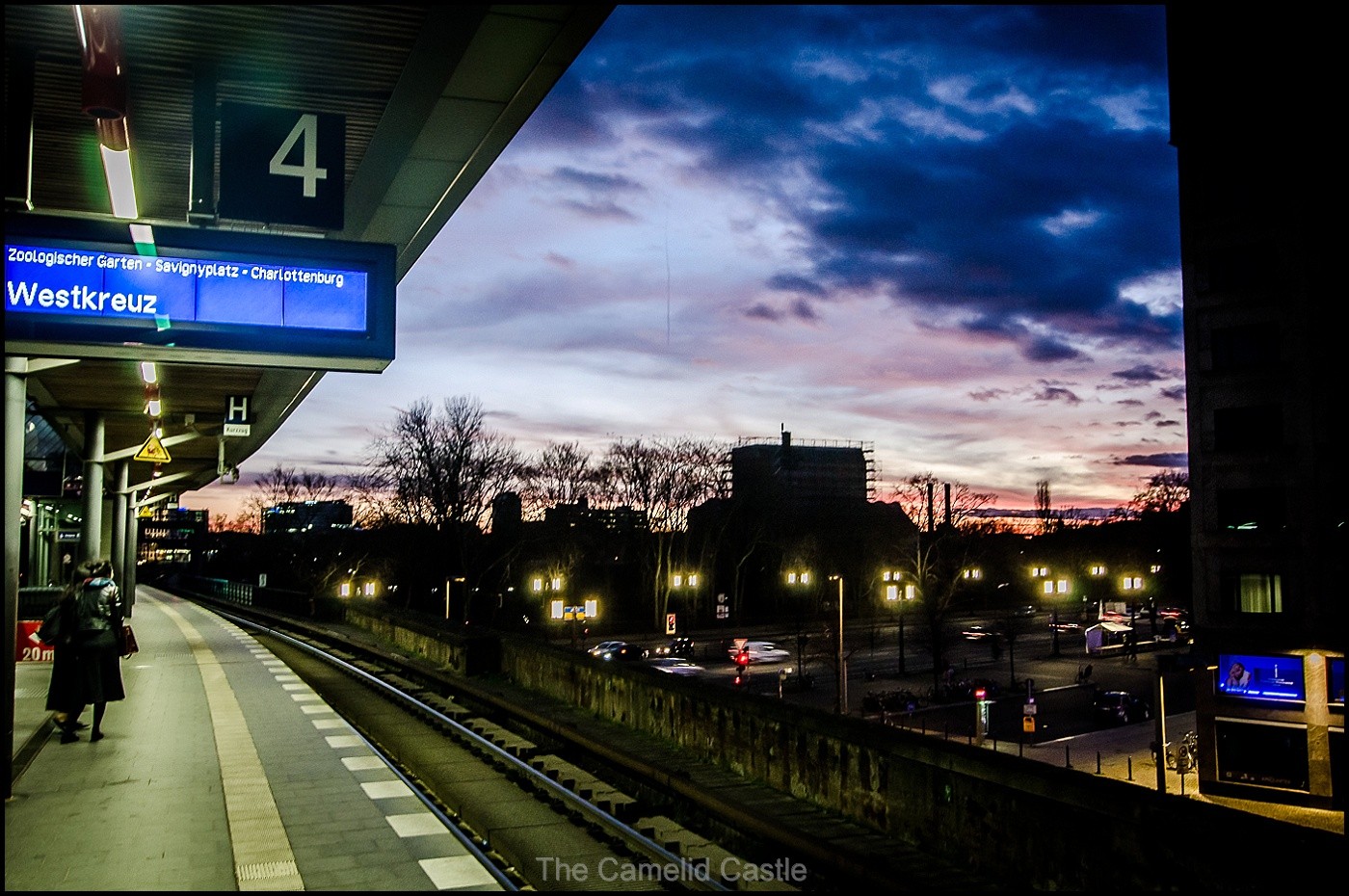 As there were no dinner plans we decided to re-visit the biergarten where we had lunch on the Berlin bike tour – as it was conveniently a couple of hundred meters from a train station we were already going through. The boys had a hearty meal schnitzel and a (large) beer, Nic got something approximating a vegetable – pumpkin and potato fritters with salad. Nic doubled down withbik a Baileys fortified hot chocolate while the kids had to make do with a ‘normal’ one.

After filling up on dinner we made the pretty easy trip back to the apartment, during which Soren decides he has had enough of the day and falls asleep (always great just before bedtime) While the kids were being sentenced to bed we ran around packing up the lovely big apartment for our trip to Prague.

All in all it was a good day. Potsdam is an easy day trip from Berlin, and the history and scenery of the area were well worth taking in.  It’s not a small area, and the palaces and gardens are quite extensive. Even with 20km of riding we didn’t see everything. There were trams and buses, so you could rely on them, or walk, but I doubt you’d cover as much ground in the same amount of time.  Lots of bike tours run during the warmer months or you can just hire bikes and do it yourself.  The extra history and perspective from a guide is always entertaining though!

Statistics for the 26th of December 2015 in Potsdam (and Berlin) – the minimum temperature was 8, the maximum was 14 and the mean was a very warm 11 degrees.  We all got pretty warm when riding….  Total riding for the day was 20.5km with an additional 12.5km of walking.  Some of us were dragging kids and camera gear for that!  All food and alcohol (both the Russian and German components) were well deserved at the end of a long day.