We are back from our recent trip to Hong Kong and Malaysia, so I’ll be wading my way through the 2,000 photos and sharing some of them, and our adventures, in upcoming posts.  This trip was planned as a birthday celebration for Anto, who was turning 40, and he has been working so much recently, that going overseas was the only way to get to see him!

The first 6 days of our trip were spent in Hong Kong.  Annoyingly, Hong Kong is 7,400 km (a 9.5 hour flight) from Canberra, and we have a pesky flight to Sydney first, so it was a long day of travel ahead.

We had an early start to the day but the kids were very excited and woke before they needed to. We were out of the house by 6.30am and headed to the airport in our shorts/leggings and t-shirts, while it was a mere couple of degrees above zero outside. We weren’t taking jumpers, and we are pretty tough (or stupid)!

A quick check in, where we were congratulated for traveling light with 2 kids (only 2 medium suitcases and a total of 39kg, apparently that is ‘light’).  For the record that is a pretty good effort for us, I’m the queen of over-packing.  Another few overseas trips and we’ll have it down to 1 suitcase! A super-fast run through security and we were on our way….. 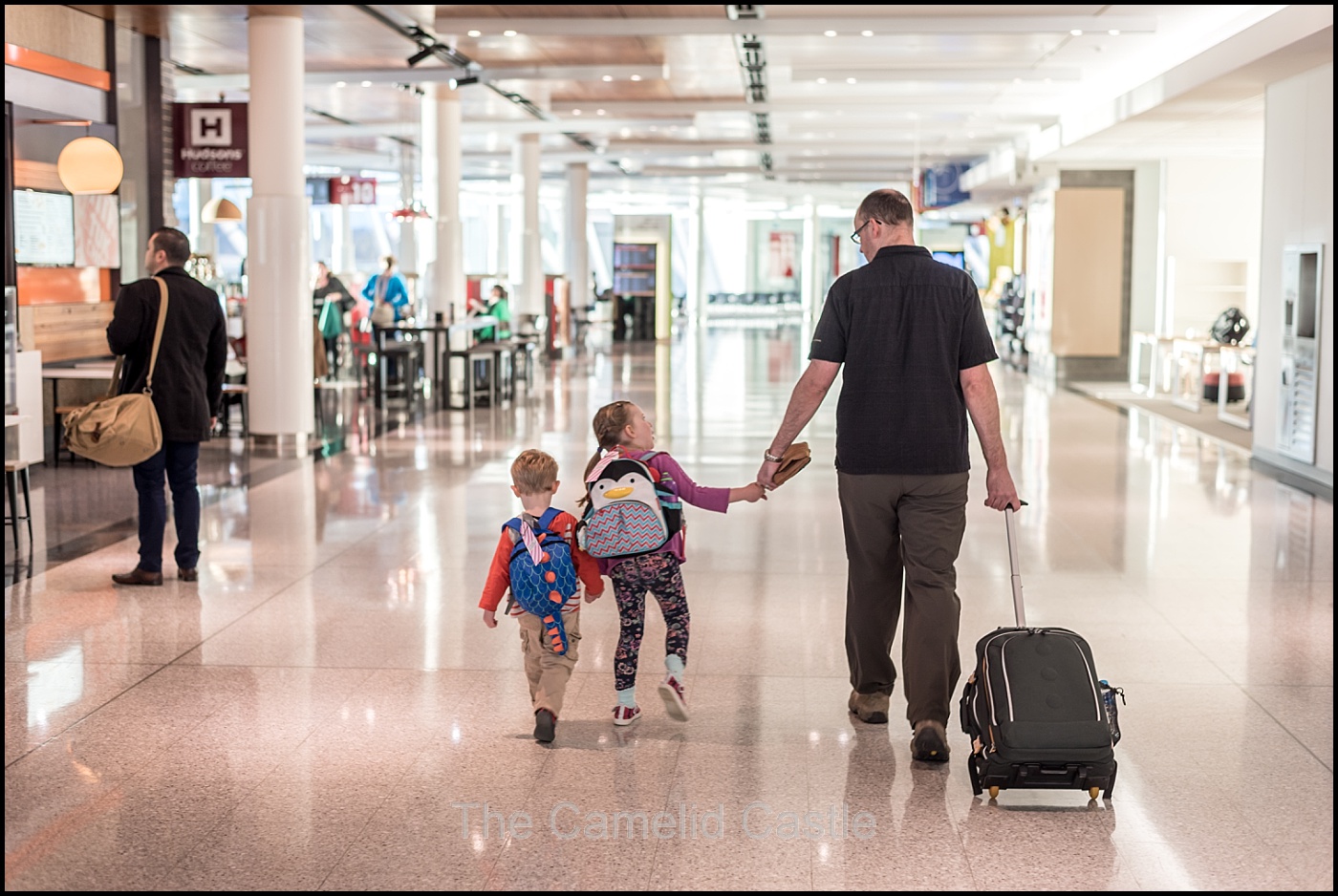 All too frequent visitors to the airport, we found our usual spot in Qantas club and settled in to watch the planes take off and eat some breaky ……and much needed coffee after too much pre-holiday packing, cleaning and Olympics watching.

Our flight out of Canberra left at 8.30am and we found a good friend was on the same flight and some neighbours. Canberra does that!  It turns out we got to catch-up with Natalie pre and post-flight, a total unexpected bonus.

The normally uneventful flight to Sydney hit ‘moderate’ turbulence that seemed to involve roller-coaster, stomach-churning antics and our butter and jam flying all over the cabin. At least the food service got to us, Natalie wasn’t so lucky.

We made it in one piece and landed on time in Sydney. We bid farewell to Nat and headed over to the International terminal (aka the ‘fun side of the airport’).  It was an efficient bus transfer for once and we were line skipped through immigration and customs due to the kids (one of the advantages of travelling with kids).

We made it to Sydney International Qantas Club with an hour to eat and drink.  As usual we were the only people in the family area in Qantas Club (which is blissfully separate from the main area) and we amused ourselves with ‘second breakfast’ and the undivided attention of staff who bought the kids huge hot chocolates with marshmallows and strawberries.  Anto and I had more coffee…. 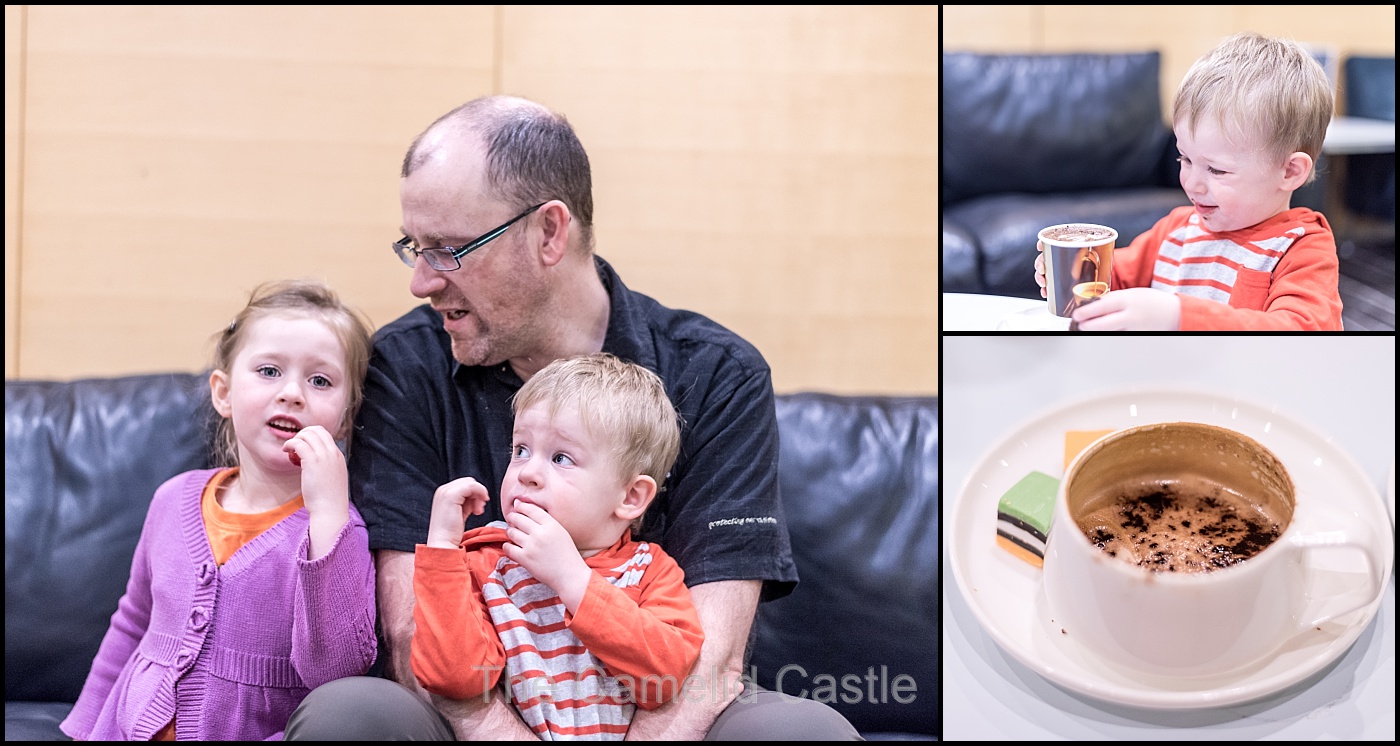 Our flight out of Sydney was departing at 11.30am and was a bit slow boarding.  Much to Astrid’s annoyance her window seat was jammed against a blank bit of wall but we settled in for the almost 10 hour flight.

The flight was fairly uneventful. Day time flights of that length with the kids are not ideal but we had little choice in our carrier/price range. By the end of the flight we again agreed that flying overnight with the kids is soooo much easier.  That said, they were pretty good. Anto has just gotten used to flying on his own for work and has forgotten that you get zero peace or sleep when you have small kids with you!

Soren was already tired during the Canberra-Sydney leg but hung in until after his lunch was served and then voluntarily had a nap next to Anto. Astrid amused herself watching movies, doing schoolwork and talking non-stop for the first 5 hours of the flight. My noise canceling headphones kept most of the noise out but I had to keep interrupting my movies to listen to her babble.

Soren woke after an hour or less, and then needed distracting for the rest of the flight.  I think he and Astrid swapped seats about 19 times – we were split across an aisle with an adult with each child. Astrid was good and slept for a good 3 hours late in the afternoon. Her brother not so much. He flatly refused more sleep and we played a lot of games on the tablet and watched a lot of Peppa Pig.  Mid-flight icecreams helped calm the rampaging children…… 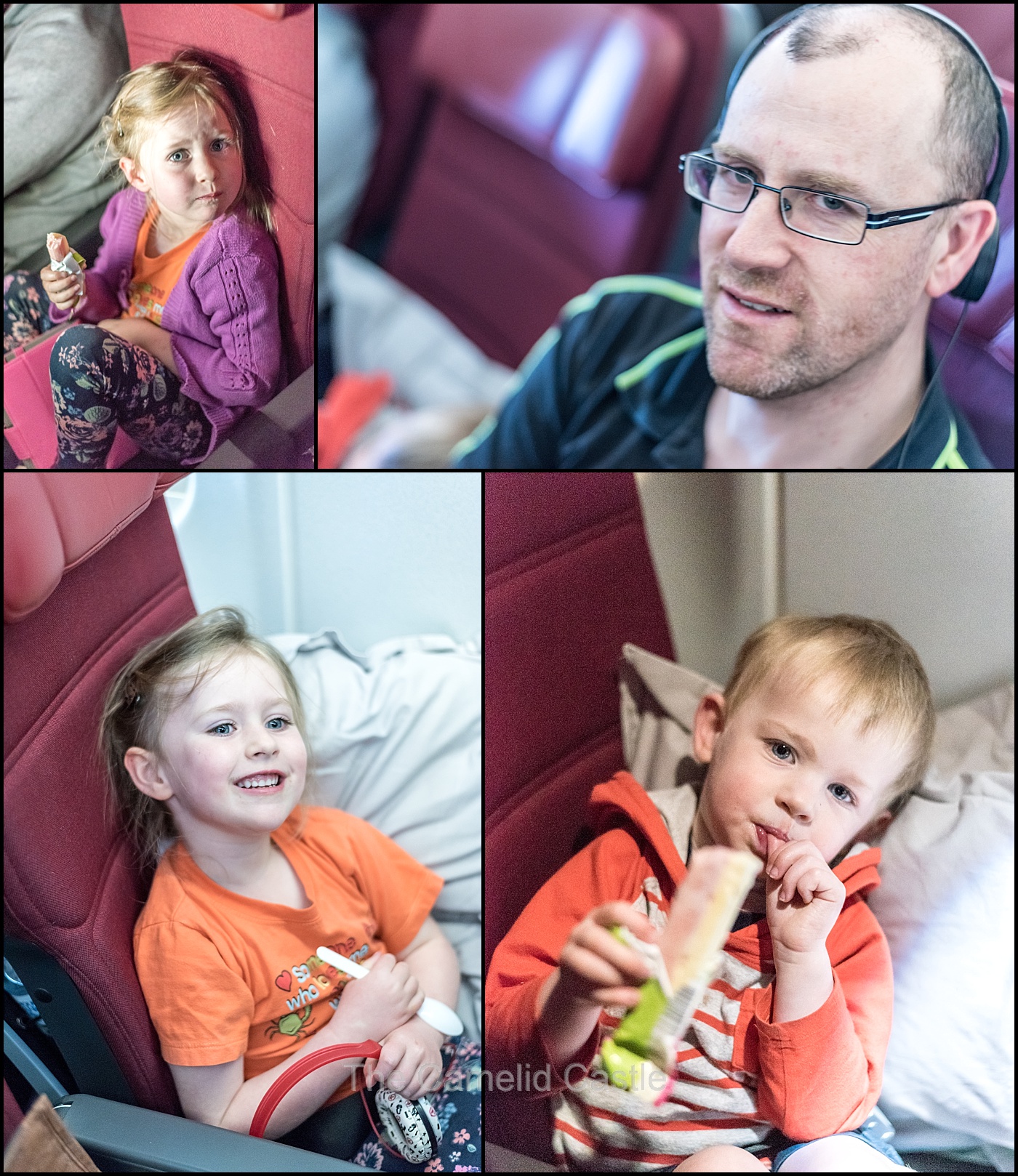 Anto got about an hours rest and I seemed to always have a chatterbox and awake kid next to me (they only slept when they were next to Anto) so I watched a lot of movies but the last few hours of the flight dragged a little.

All in all it wasn’t too bad, except for the over-tired Soren, who despite going to the toilet every hour, decided he really needed to go with only 6 minutes until landing. Anto heroically got him there and back to his seat before the seat-belt sign went on but Soren fell asleep on landing (of course, 10 hours into the flight) and wet his pants anyway. Kids!

We landed in Hong Kong half an hour late, at almost 7.30pm local (9.30pm canberra time). Due to the length of time it takes to get into the city, and the long travel day, we had booked the Skycity Marrriott, at the airport, for the first night.

Soren was exhausted and refusing to walk through the airport, so got carried/ergo’d and we efficiently got luggage and sped through immigration (tip even your almost 3 year old gets counted as a baby when in an ergo on your back and you get line skipped). People holding small kids had to wait.

We found the free shuttle to our hotel and a mere 10 minutes later were checking in and getting exhausted and smelly kids and adults off to sleep for the night. At this point we were rather glad we’d opted to stay near the airport.  As a bonus it meant less travel time for our planned activities for the next day, which were all located on Lantau Island, the same island the airport is located on.

The Skycity Marriott was pretty nice. While the blue carpet was bright, it was a good sized room, lovely bathroom, and very comfortable for the 4 of us.  It wasn’t a cheap hotel but the beds felt like clouds after a long day of travel.

Next up – Lantau Island, the cable car and the ‘Big Buddha’…..