Astrid had a restless nights sleep and at 4am woke up screaming hysterically. She was shaking uncontrollably and we checked her temperature and it was 38.5. Given a temperature for her is 36.5 this wasn’t a good sign. We gave her paracetamol and some cool washers and milk and she went back to sleep for a bit in our bed. When she got up for the morning her temperature was back to normal and she seemed in a reasonably happy mood, running around all over the apartment. Her eyes were still gunky but looking better than the previous 2 days, so we continued to flush them with saline.

It was supposed to be a rainy day, but was currently not actually raining. Given Astrid seemed fine we decided to rug her up and wander down to Opera Garnier, also known as Palais Garnier or Opera national de Paris. It is the 1,979 seat opera house built in the 19th Century for the Paris Opera. It was also the setting for The Phantom of the Opera book, and subsequent stage shows. Many operas and ballets are still held there every year. We had walked past the building several times and it is quite impressive and we had read it was worth a look inside.

It is an extremely impressive building. Most of the rooms are huge, with marble columns and marble and stone stair cases and railings, velvet seats, intricate mosaics on the tiled floors and a amazing ceiling art and chandeliers.  The building is designed with axial symmetry and the interior consists of interweaving corridors, stairwells and alcoves and landings to allow the movement of huge numbers of people during intermission. The stage area is big enough to allow for 450 artists and the audience sit under a 6 tonne chandelier. 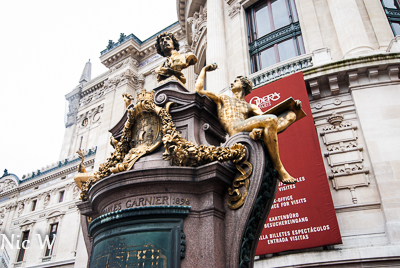 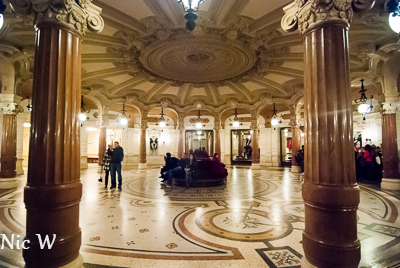 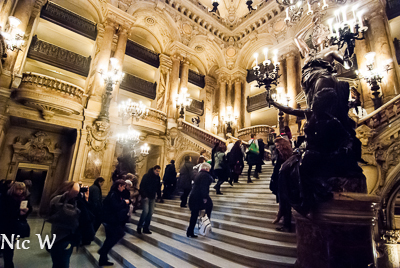 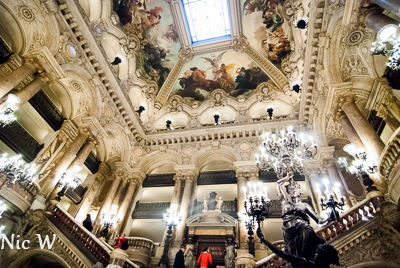 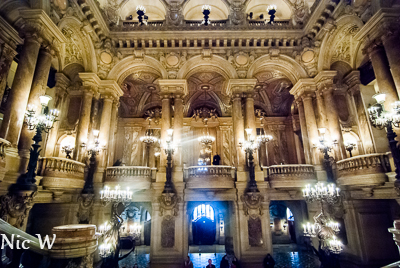 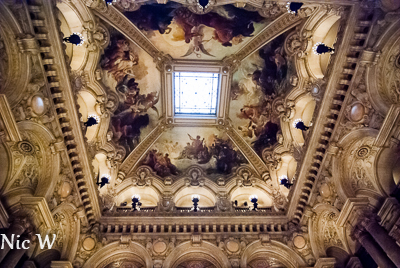 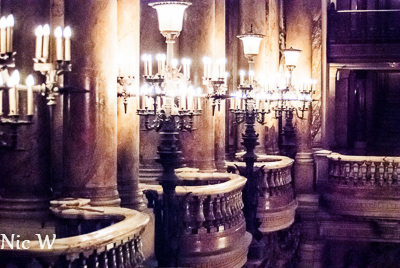 We walked through different areas and it was amazing to walk around.  The main staircase is huge and the view from each level is stunning.  You weren’t allowed in some areas but could look into the orchestra boxes and the viewing boxes for the main stage area. 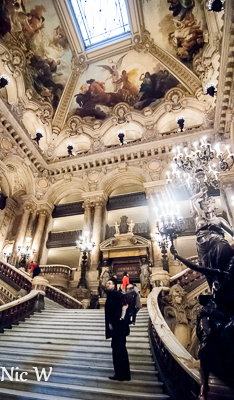 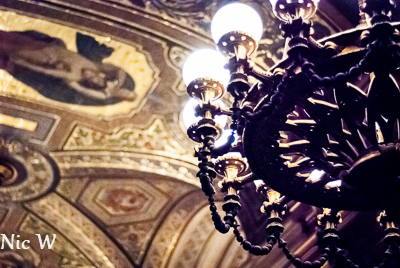 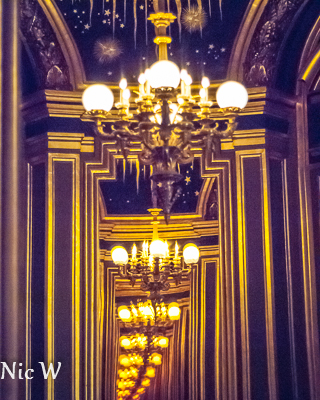 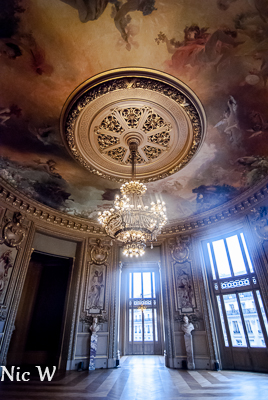 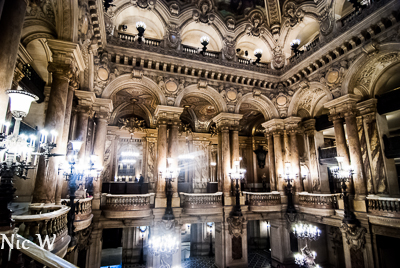 The also had the library open on display (which was multi-tiered with ladders and cute balconies) and dioramas of previous operas and ballets on display. There were also costumes from past performances in display cases, so you could see them close up and the work in them was amazing.

We loved wandering around and Astrid was enjoying running around the huge halls and climbing up and down the stairs. We both concluded that if we ever got a chance to see a performance there it would be worth it. If you are ever in Paris, having a look through Opera Garnier is definitely worthwhile! 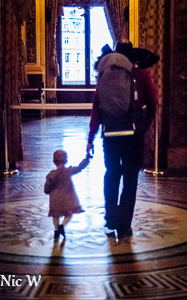 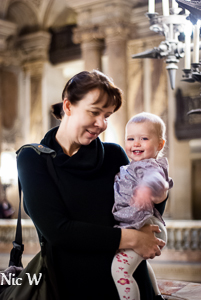 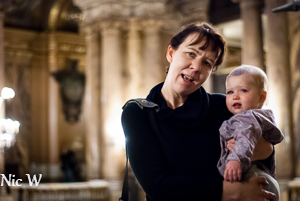 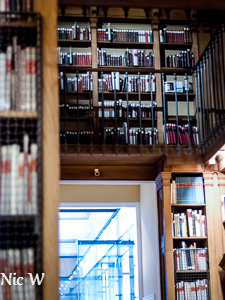 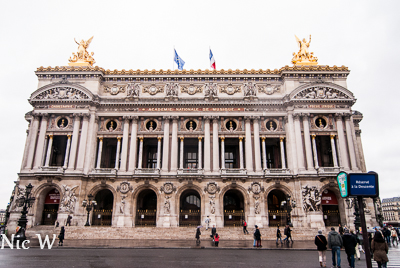 Astrid was starting to get a bit tired so we put her back in the carrier and headed outside for some photos of the building. We noticed she wasn’t looking all that well so headed quickly back to our apartment.  Once back she was quite listless and had a 39.1 temp. Paracetamol wasn’t bringing her temp down quickly enough and she was breathing quite fast and shallowly so we decided it was time for a doctor.  A lot of ringing around and we got an emergency appointment with an English speaking doctor for later that afternoon.

Her temp came down enough for us to stop worrying too much and her breathing improved and she had some sleep but was still quite unwell.  At 4pm we got her rugged up and headed to the metro station. We had picked the route that kept us inside for as much as possible. The first metro ride was fine but when we arrived at the second station there was a crowd and the board showing the time til next train wasn’t working. We had allowed plenty of time but this was unexpected as the metros always run every few minutes. We ended up waiting around for over 10 minutes and when the metro arrived it was so full that we were packed in like sardines. It was the busiest we had seen it and not a particularly pleasant experience. Astrid looked a mess, and was strapped to Anto and I’m sure no one wanted to be near her but they didn’t have a lot of choice.

We found our way to the doctors without too much drama (and on time, just) and commenced waiting around in a doctor’s surgery, albeit a very expensive looking Parisian one.  There were some American nuns in the waiting room, which was different, and everyone spoke mostly English and French secondarily so it was nice to hear some English.  As usual the doctor was running quite late but she was very good. She was American, educated in Quebec.  As we suspected Astrid had conjunctivitis and had an ear/throat/chest infection. She was still running a temperature but it was only in the 38’s at least.  We got some scripts for antibiotics and eye drops and instructions to take her back on Monday if she hadn’t improved.

It wasn’t a cheap doctors consult as we did as a private consult but it wasn’t that much more than home and we might be able to claim some on our travel insurance. We were surprised at how cheap the medications were. Two vials of antibiotics, 1 lot of antibiotic eye drops and some baby paracetamol was less than 10 Euro.  Much cheaper than home!

It was after 6pm once we got out of the doctor’s.  On the walk back to the metro station we realised the Eiffel Tower was just near us and was all lit up in the evening. Shame we didn’t take our cameras!  The metro rides home were even more squashy than the way over. It was hard to even breathe there were so many people jammed in. Somehow Astrid fell asleep as she was so exhausted.  She slept all the way home.

After her first dose of antibiotics and drops (which she is so not a fan of) we got her to sleep.  Tired and weary we figured we needed some dessert.  We had somehow deleted the photos of the gateaux opera from the other day, so in the spirit of thorough blog reporting we had another one, for the photos you know…….. and we had been to Palais Opera earlier that day. At least that is our excuse and we are sticking to it! 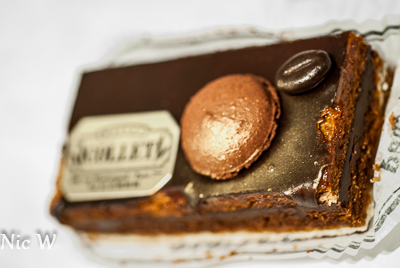