After us all getting to bed on the wrong side of midnight, we (the adults) were hoping for some sleep. Due to the leaks in our apartment, the real estate agent had booked a plumber to come around at 8am to look at it. Sadly Astrid woke at about 7.15am anyway and didn’t understand why her parents weren’t in the mood to play!  I really don’t understand how babies can be so chipper even when they should be utterly exhausted.

So first frustration for the day…… child not sleeping when you are all desperate for some rest. We totally anticipated it but it’s still annoying.  The plumber did arrive, a little late but no issue since we were up.  It was an interesting bilingual conversation but he inspected the ceiling realised that the water was probably coming from above (also our conclusion). We were pretty sure it was nothing to do with our apartment since it pools in the ceiling. We were somewhat relieved to get back from Sweden and find the ceiling still intact.  The plumber tottled off and we still haven’t heard whether the problem will be fixed or not.

Once we had breakfast and completed a million loads of washing we head off on our main task of the day…… get new passports. Regular readers might remember that our passports got soaked from our rainy day in Luxembourg. Very, very annoying given you really don’t need them when travelling within Europe and by train, but we had them ‘just in case’.  We had to get photos for the emergency passports and we have seen photo booths at pretty much every train station and metro station in Paris. So, we head off on the metro and planned to grab the photos on the way.

Frustration number two for the day, the first 2 metro stations did not appear to have a photo booth. We had an RER connection to get to the Embassy and after some searching we found a photo booth. The next frustration was that we didn’t have change in Euros after being in Sweden for a few days and using Krone.  Anto went to obtain some change, a long and annoying process.  Once back we discovered the photo booth wasn’t actually working….. more frustration.

We were now right near the Embassy (which is conveniently located right near the Eiffel Tower and has fabulous views).  We still didn’t have photos for me though (Anto had some that he had used for his International drivers licence). We went off in search of another metro station or anyone with a photo booth. Of course this is one area of Paris that isn’t littered with train or metro stations. Luckily we have walked the Eiffel Tower area a few times and we knew where they were all located. Astrid, exhausted from our last few days travelling has fallen asleep in the ergo.  We walked through the Tower and down by the Seine but didn’t find any photobooths. It was a beautiful day, sunny and about 11 degrees, which felt possitively balmy after Sweden. We were slightly shitty that we were spending the day traipsing around for passports rather than enjoying Paris. The upside was that we were walking through Paris, and around the Eiffel Tower, on a beautiful sunny day……. even if we were doing it for annoying administrative reasons.

We found another metro station and again no photo booth. More frustration. We decided to catch the metro down the line to Havre Caumartin, where we know there are multiple lines and likely to be a photo booth. It was a multi stop trip and Astrid slept the whole time, even in a noisy crowded metro. We got to the other station and finally found a photo booth, and it was working, yay!  Of course in the process of our 2 hours of wandering around trying to find photos, about a million people got in our way, tripped us over or were generally annoying. It was like we were tired and grumpy and everything was grating on our nerves!

Once the working photo booth was located it took all of 2 minutes to obtain the photos. Unfortunately it was now after 12 and the Embassy only processes passports from 9-12 and 2-4. We gave up and headed back to the apartment. The next frustration was that our metro tickets had timed out and we had to use new ones. No big deal, but annoying.  We got back to our street with Astrid still sleeping and got some fresh baguette and croissants for lunch. We even picked up some groceries with her still sleeping peacefully. We got to the door to our apartment hallway and a door slammed next door and woke her up….frustration!!!

We all decided to have some lunch, which was delicious. We are going to miss freshly baked baguette once we are home.  Since Astrid had already slept for awhile in the ergo we figured there was no way she would have a proper sleep. Not so bad, except she was so down on sleep in the last week and grumpy.  Oh well, we had a play and then at 1.45pm decided to head back to the Embassy.

More metro tickets…… but we got there pretty efficiently as we know the way really well. The highlight  (or lowlight?) of the trip was the RER train having no lights on, so without internal lighting you could see into the tunnels as you travelled through them. It was simultaneously fascinating and spooky being totally in the dark whizzing through dimly lit train tunnels with fast, lit up trains crashing past on the other side. You did get to see more than you normally do with the lights on, but you wouldn’t want to have been scared of the dark.

Once at the Aussie Embassy, they inefficiently scanned us with the retro-fitted x-ray and scanning machine and were escorted up to the DFAT (passports) area.  Special points to the Embassy for re-creating any mid-70s Australian Government department office environment you can find in the ACT. You seriously could have been walking through one of many Department’s at home. Down to the waiting chairs, posters, faded paintwork and carpet and office building smell. They also had the exact same signs that all Government Departments have……..’Australian Government, Department of …..’ even with the same font!! Obviously they export them to all Embassies.  Hmmm, even the photocopiers and security passes looked the same. It was like being at home.

Forms filled in and many, many Euros handed over we had our applications completed.  We were a few days short of being able to get new full passports (they take 10 days) and we need to travel to the UK next week. This means another full passport application when we get home as the Emergency passports are only issued for a short time.  More frustration.

We escaped the Embassy and decided to do some shopping on the way back. The Embassy had taken over an hour and our metro tickets had timed out……again, frustrating as it was only by a couple of minutes! We got off our metro a few stops earlier at Les Halles and went to locate a cute bunny backpack for Astrid we had seen the other week.  It was at a Nature Decouvertes (Nature and discovery store) and has the cutest things. Astrid is currently in love with all bags, and adored a backpack of Nelly’s she was using while in Sweden. I was originally going to buy her the bunny backpack for Christmas but we decided to get it for now given how happy it would make her, and she has been good with all the running around the last few days.  Bunny backpack acquired, along with some cute Christmas decorations and some spice mix to make more Gloog (spiced wine we had in Sweden . Astrid was too dangerous in the store with way too many things in toddler reach so I’d taken her outside where there were Christmas lights and she danced around to them until she fell over from the excitement and tiredness.

Heading out we stumbled across the most amazing store, Maison Du Monde, which was the homewares store of my dreams….. so many gorgeous and very chic and French things to buy! It was very Astrid unfriendly so we had her contained in the ergo but we managed some quick shopping and got some gorgeous things. More shopping could have been done but we had a grumpy bub and were doubting our ability to get many of the glass items home intact. We may have to go back for more shopping though…..

Back to our apartment for some dinner. Anto is quite the crepe expert and we had savoury crepes for dinner along with a pear and chocolate tart from one of our street patisseries, we have been eyeing off for weeks. The crepes were delicious and the tart lovey, but the tart was not up to our very high standards (although very acceptable). We are running out of Paris days so might have to up our dessert intake to 2 a day to get through all our desired pastries in time! 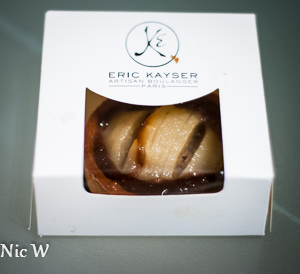 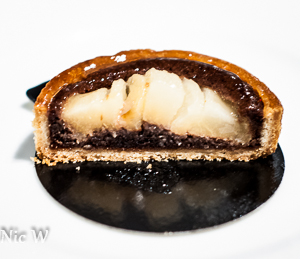 All in all it was a day of many frustrations but we were in Paris, we did some walking around, some lovely shopping and some delicious food, so life isn’t that bad! And the verdict on the bunny bag, it’s a winner……..  Just when did our little baby turn into this out-going toddler, I ask???  She is so grown up now. Powered by croissant I imagine! 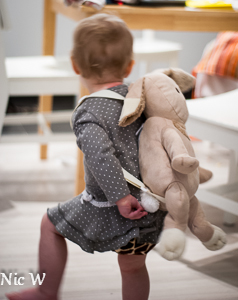 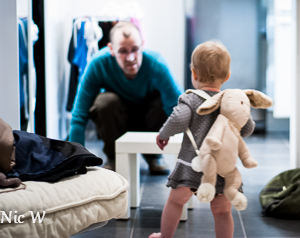 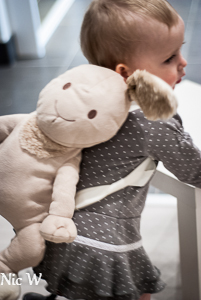