After two days of a new bed Astrid had pretty much gotten her sleeping back to normal – just in time to wake her up early and head back home.. Breakfast was a traditional Swedish cornflakes and tea – with a small amount of flatbread thrown in for authenticity. With breakfast out of the way our bags packed all that was left was to say goodbye to the ever happy dog, Dumle and run out to the car for the next (slightly frozen) leg of the journey.

Bjorn had helpfully warmed up the car so aside from the quick run from the house we avoided having to expose our self to the slightly frigid climate. We proceeded to drive south down to Karlstad – about 30-40 minutes or so. During the drive the temperature varied between about -1 and -4. Unlike at home, with similar temperatures, not only was there a fairly decent frost but there was actual ice on the road. Having never had the joy of such driving conditions I was fairly glad that Bjorn was behind the wheel. Before we knew it we were at the train station and saying our (temporary, Bjorn will be visiting us in about 5 weeks) good-byes. All was well with the world until Astrid realised the ‘Bjorn man’ was leaving and not coming back – not even 9am and we had already broken her heart for the day.

The train to Stockholm was the express service this time,and provided an amazing differentiation from the Friday night affair – the cabin was spacious, comfortable and modern. As a bonus the train was not only at the station early, it also left and arrived on time. This was our first tilt train and the journey was in daylight (well Swedish, half daylight) and we could see the train tilting towards the huge lakes that virtually came up to the side of the railway lines, which was rather cool. Astrid spent a small amount of time watching her favourite TV show some time walking around and leading her parents (up the wall) by the hand and finally holding a talk (and possibly dance) off with a local baby who was also on the way to Stockholm. It would appear that baby banter translates much more easily than the more adult languages. A quick trip to the storage lockers at the train station (rather modern credit card operated devices) and we were off into the crispy Stockholm morning.

We snowsuited up Astrid, as the temperature was forecast for a maximum of 2 degrees. We aren’t sure what the temperature was all day, but it was icy cold and probably around zero. The plan for the day was to start with a viewing of the changing of the guards at the Royal Palace, which takes points for mostly looking like a dull government building from the outside, but apparently when it was built it was he talk of the European Royalty set. The royal guards looked pretty impressive and were more so for standing out in what was rapidly becoming a pretty frigid day. The changing of the guards seemed like any other Royal Guard changing, with scary shouting and marching around with swords and cannon, however it was fairly evident that most of the guards were fairly well armed with their (albeit shiny) bayonets fixed and ready to use. Once the guards had finished their marching and shouting routine, which included marching really quite close to the crowd of on-lookers – a distinct change from the British version where crowds are kept nice and safely away, we wandered into the ‘old town’ which aside from being quite touristy was pretty and quaint. 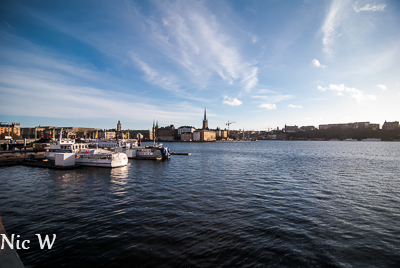 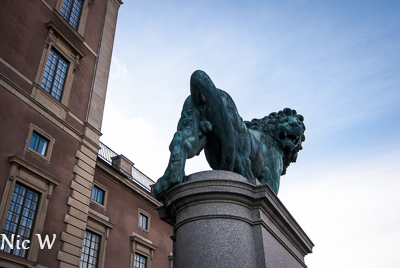 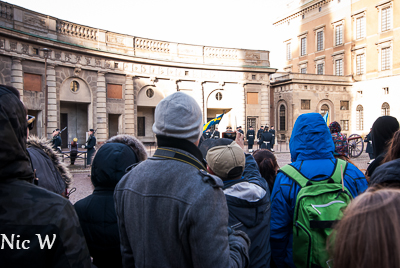 Astrid had fallen asleep in the ergo within seconds of leaving the train station so we wandered around the old-town allowing her to have some rest. The old town was indeed very pretty and some shopping was done before a nice lunch in a bar tucked into the side of a building. 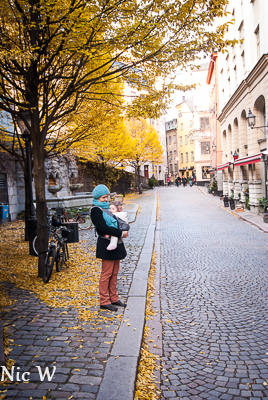 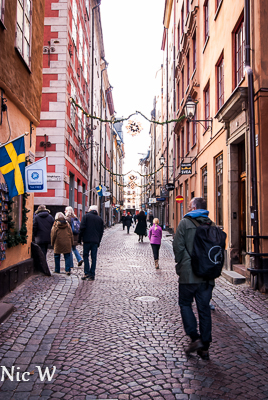 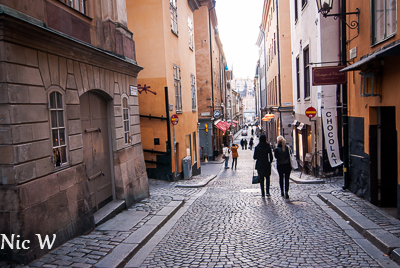 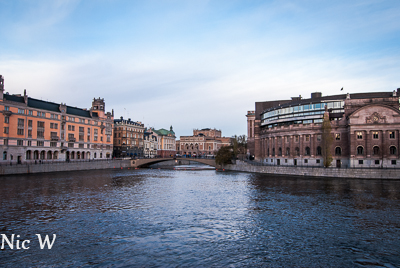 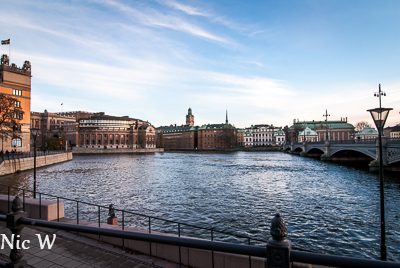 Astrid enjoyed sitting up high and sharing her parents burgers, although she seemed to be suffering slightly in the cold. While her parents had nicely tucked her up in warm clothes her refusal to keep her lovely warm mittens on meant her tiny little hands were suffering – made only worse by her need to wave and flap them around. With the hand situation fairly rapidly deteriorating we wandered in the direction of Stockholm’s only tram, which helpfully both took us to the Vasa museum, provided much needed warmth as well as a quick tour of (a small amount of) Stockholm. It was just after 3pm and the sun was about to set so we rode around on the tram getting great views of the sunset. 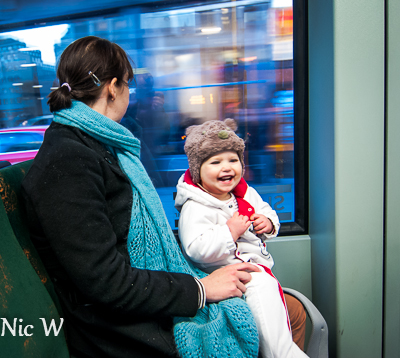 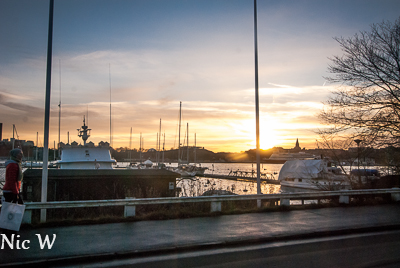 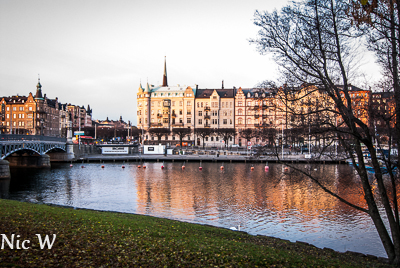 The Vasa museum is dedicated to the preservation and display of the Vasa, a 16th century battle ship that sank 1500m meters after it’s maiden launch in 1628, somewhat embarrassing for what was meant to be the latest and greatest in war-ships. The list of reasons for it’s sinking could be used for almost any failed project in the last 400 odd years, but at at bottom line the ship pushed the technological boundaries of the day with pretty much everyone involved failing to recognise the fact that they were doing so. Apparently the ship failed a basic stability test before being ordered to head out to sea anyway. What was amazing is the level of preservation, apparently the salinity combined with the environmental conditions and the construction materials left the vessel amazingly intact – in fact when it was discovered they managed to seal the gunports, pump out the water and re-float it almost 400 years later – impressive in hindsight… The best bit of the museum was seeing the impressive size of an intact 17th century ship, very large and foreboding in real life.

The Nordiska museum, which is next to the Vasa museum and an impressive building (we didn’t get time to go inside: 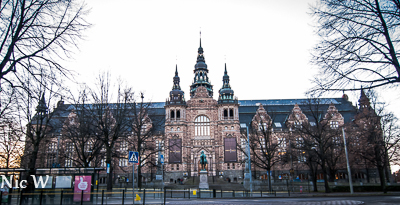 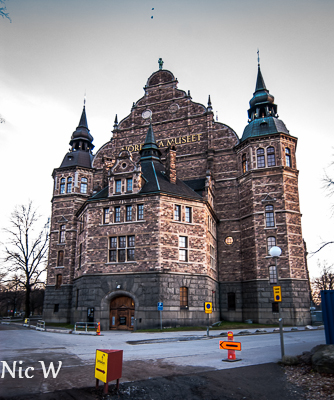 The Vasa museum from the outside: 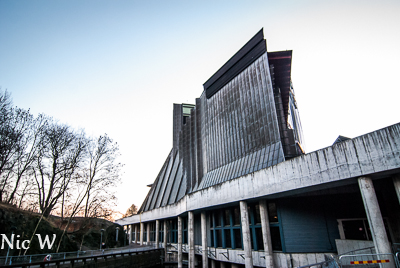 The Vasa…… and Astrid: 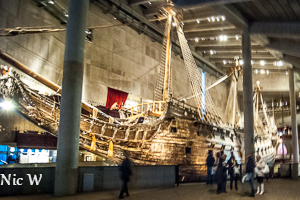 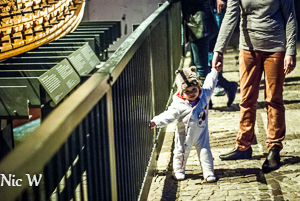 The model of the Vasa and it’s sinking: 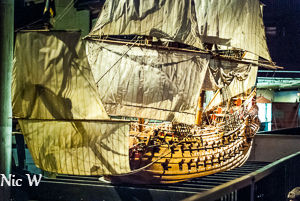 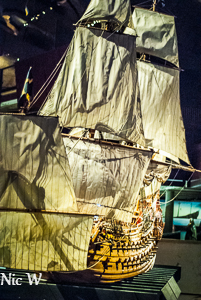 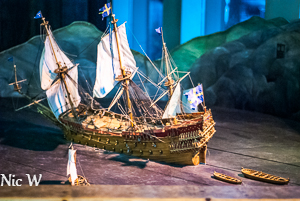 The intricate carvings on the Vasa that were preserved even after 330 years at the bottom of the ocean: 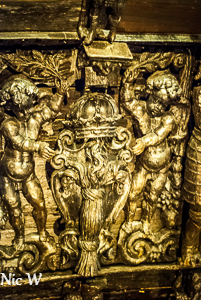 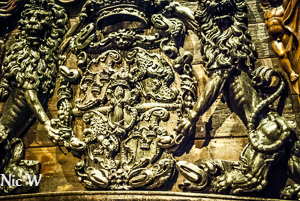 Post Vasa museum we caught the tram back to central (or as close as we could get..) picked up our bags and wandered through the nicely connected buildings to the central bus station for our transfer out to the airport, which was accomplished with remarkable ease.  Astrid again fell asleep in the ergo on the walk to the bus station and slept through the entire 35 minute bus transfer to Arlanda airport. The check-in process at the airport was just as quick and painless, leaving us plenty of time to consume a horribly overpriced dinner and a quick shop to use up our last Swedish currency before boarding the flight back to Paris.

One of our last looks at Stockholm city, with all the Christmas lights on display: 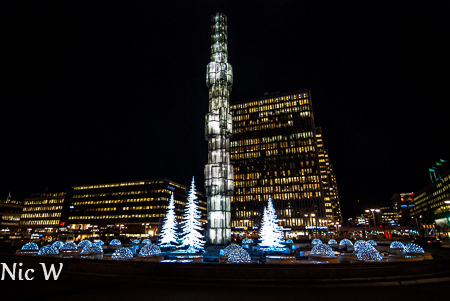 The 7.30pm flight was fairly un-eventual, with the exception of Astrid refusing to go to sleep for the first hour and a half, despite being obviously exhausted. She screamed hysterically and carried on alike a pork chop throwing our dinners all over the plane.  It wasn’t helped by the squishy seats and packed plane (at the front, where we were, plenty of seats at the back and they didn’t reseat us) so no room to spread out. The woman in front of us put her seat back and with Astrid on our laps we couldn’t eve put our tray table down, so rather uncomfortable. Luckily Astrid fell asleep for the last hour of the flight.

Once back at Charles de Gaulle we picked up our bag and were greeted with the delightful message that ‘all trains on the RER have been suspended’ – given the RER is quick, easy and cheap the other options were not all that attractive, and at this point it was after 10pm. By the time we wandered around working out what to do we thought we would see if the service would resume and wandered down to the station – as we got in sight there was a train waiting at the platform complete with a scheduled departure time. A few minutes before we were due to leave the monitors all started flashing up with a very welcoming green screen basically stating ‘everything is OK now’ – the level of relief on the train was obvious. After that it was a quick (and becoming a standard) trip back to our ‘local’ metro station – actually our second choice – it’s a 500m walk back to the apartment but saves an additional  transfer. A rapid wander past all the late night vendors (including the crape place we both agreed we should visit after walking past so many late nights) had us back in our apartment safe and sound – with everyone looking forward to a good nights sleep. It was unfortunately after midnight when we got in and we were all very tired but relieved to be back.