Astrid woke up before 6am but Nic managed to get her back to sleep. Unfortunately Nic didn’t go back to sleep so Anto and Astrid slept and at about 7.30am Nic went out to try and get some sunrise photos. It was overcast and wet (having rained heavily most of the night) but it was still pretty. No lovely sunrise but still a nice time for taking photos, especially before the rush of tourists descended on the Mont. 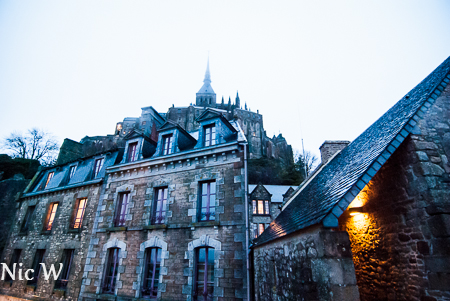 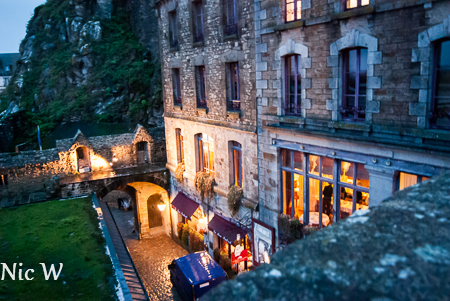 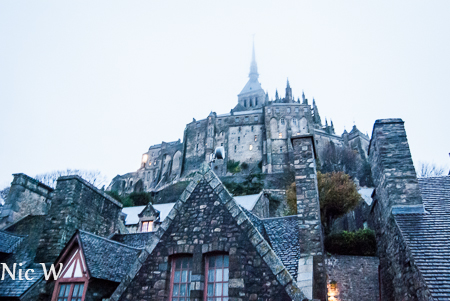 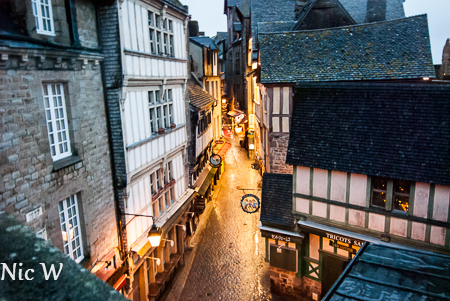 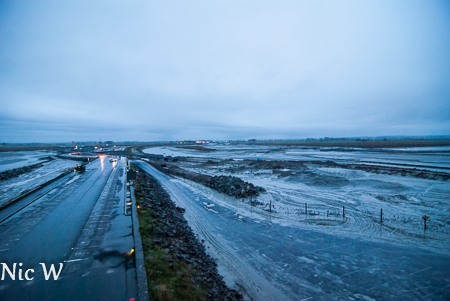 For once it was nice to be staying in a hotel & to not be in a rush to be out and about. With our wandering around the night before we had a pretty good idea of how much time we would need to look at the Mont during daylight hours and concluded that we didn’t need to rush around. After a relaxed drink of milk for Miss A (we have become expert at procuring, transporting and both chilling and heating milk while out and about) we wandered down the 3 floors to the proscribed places for breakfast. Breakfast was a lovely affair with the usual range of pastry’s, cereals and breads, but with the addition of a range of tasty hot foods. Of course they had local butter available which paired oh-so-well with pretty much all the wonderful breads.

Post breakfast we had the luxury of leaving our stuff in the room, until midday, so quickly grabbed our coats and headed up to the Abbey that sits on the top of the Mont. While the Abbey didn’t prove to be the most impressive piece of architecture we have see on the trip, when you take the location into count it’s damn impressive. Wandering through the huge halls you fairly quickly thought how generally miserable both the monks and then prisoners would have been perched up above the sea in the cold wind. Speaking of which combined with the drizzle & general dampness the wind certainly was not welcoming.  Although not nearly ‘Swedish’ weather, our new benchmark for miserable cold, apologies to all the Swedes that know there is many more inhospitable countries around.

The Abbey is mostly constructed of stone both harvested on the Mont and the smaller bits of rock that poke out of the sea in the nearby vicinity. Given the location, building such a structure in modern times would be a challenge – when it was started in the 8th century (with most of the work being done between the 10th and 16th centuries) it was an incredible effort. The only thing that seems to not match is the rather Gothic looking spire that was ‘recently’ added in the 19th century. We followed the assigned path through the Abbey – with Astrid seemingly having a wonderful time, even better after ‘borrowing’ her dads hat – in exchange for her seemingly much less comfy bear hat. 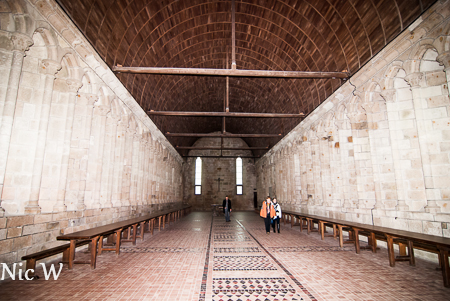 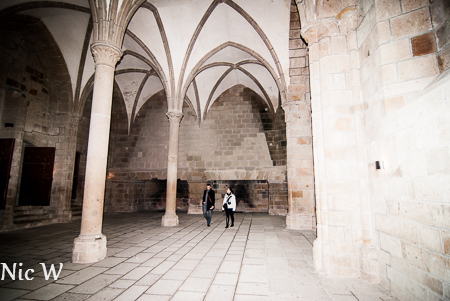 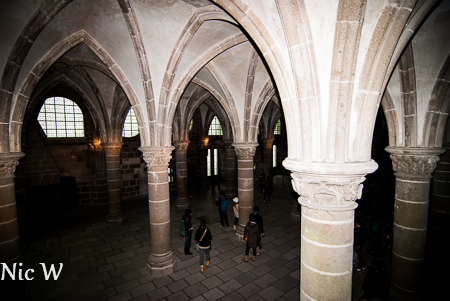 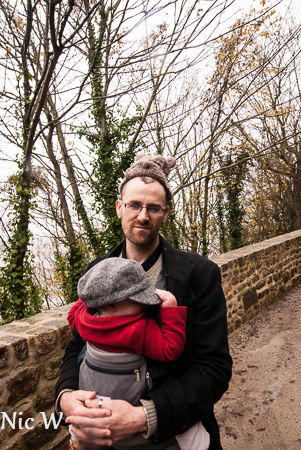 If it wasn’t for the signs through the Abbey it would have been particularly easy to get lost, they had made it quite easy by forcing you to only travel one direction. One highlight was the ‘big wheel’ that was installed in the 17th century to assist with getting supplies up into the Abbey (or prison by then) you could see the modern equivalent installed in the same location – although the ease of just pushing a button to get your stuff up seems somewhat like cheating. 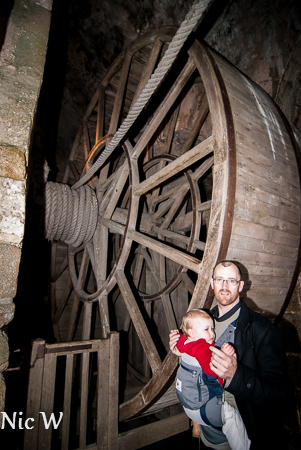 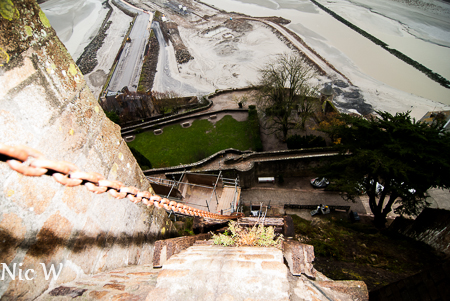 After our wander through the Abbey avoiding the tour groups we wandered over the ramparts of the Mont pondering how defensible the place would be from attackers – apparently they held out against the English for over 30 years before everyone got sick of it and went home. 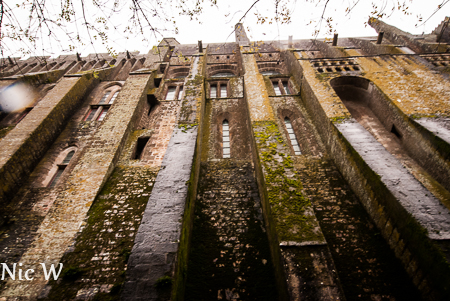 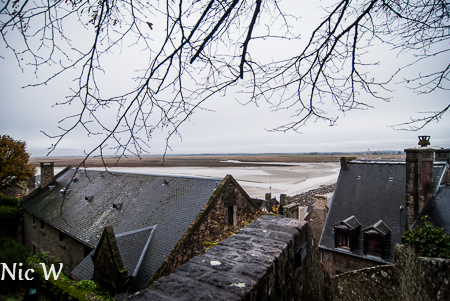 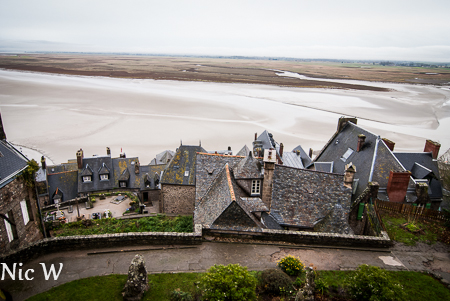 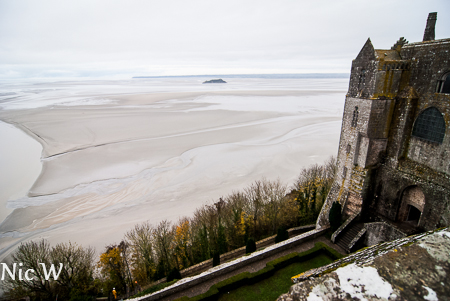 After a brief rest back in the hotel to warm up and dry out, we deposited our luggage at reception and thought it time for lunch. We decided that as the menu’s for the actually open restaurants on the Mont looked like they were all mass printed in one run to ensure that all the food was the same (to be fair there was some differentiation & we presumed that most people were probably only eating one meal here) we thought we would catch the free shuttle to the nearby town to see what was available. We were pleasantly surprised by both the range of available options and the prices. Our research had led us to believe that the Mont was full of tourists and overpriced food – the reality didn’t match the reviews, although you could see how in summer the place would be unbearably full of tourists.

Lunch was a rather relaxed affair – for us unlike the tour groups that somehow managed to get through 3 courses in under 40 minutes. Anto ordered a feast which included mussels (which were apparently in season), followed by a really excellent salt marsh lamb stew, three (quite foot stinky) local cheeses and a really nice mint and chocolate mille feulle. Nic was much more restrained with ‘only’ a huge plate of Camembert and goats cheese fritters and a desert of salted caramel creme brulee, which was truly fabulous. Astrid snacked on bread with local butter (a theme developing…), her parents lunch and some chips – after the waiter talked us out of getting her the children’s menu as it was ‘too much food’ for such a cute little food monster, and then she ate most of the food put in front of her anyway and had a dessert crepe dipped in her dad’s chocolate dessert. Astrid spent 1/2 her lunch performing for the tour groups (which seemed to be mostly Asians today) apparently having an audience of 60-80 odd people is pretty good in Astrid’s world, much waving and grinning was had by all. Given we had a couple of hours to kill and it was warm in the restaurant we also had some lovely beer and wine and felt quite relaxed and more dry after a good rest. Astrid was extremely well behaved over the 2 hours of lunch, especially since she should have been sleeping. 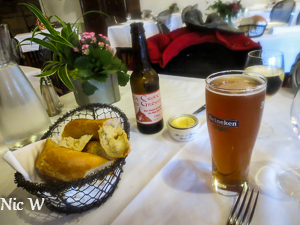 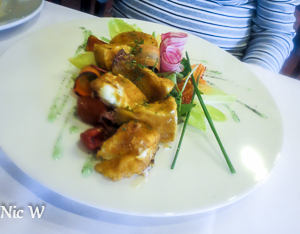 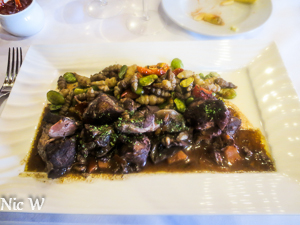 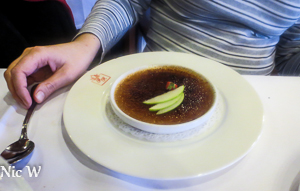 After lunch we wandered back past one of the souvenir shops for a quick look before catching the bus back to the Mont to have a coffee, retrieve our bags, take some last photos and get the bus to the train station. Astrid did finally get really grumpy as we were waiting for the bus back to the Mont and fell asleep in the ergo, only to sleep through coffee, back retrieval and the 40 min bus trip to our train station.

We enjoyed our last views of the Mont poking out of the sea and were glad we had made the trip to see it, and even more glad we had stayed on the Mont overnight. The quick bus ride to Dol de Bretagne passed without incident (after leaving exactly on time) Astrid took the opportunity to have continue napping- with her parents hoping that she would stay asleep for the transfer to the train. There was no such luck with the ‘sncf tones’ – if you have spent any time at a French train station you will know what we mean – waking her up, but at least she was in a good mood.

The TVG fairly promptly rolled into the station and before we knew it we were on our way to Paris. Dinner (for Astrid) was a train dining car provided Croque Monsieur – which unlike that available on an Australian train was not only freshly made and grilled but actually quite tasty. It was a 3 hour train trip back and Astrid was good, and happily watched TV and played games on the tablet for at least the first 2 hours. Then it got a bit late for her and she was grumpy, but it was hardly worth the effort to get her to sleep when it would ‘only’ be 8pm when we arrived in Paris. So, we just had to put up with a bit of grumpy baby and play silly games to entertain her.

The train rolled into Gare Paris Montparnasse a minute or two early – which was lucky as there were two trains at our platform and by the time you added two full length trains to our walk it was a fair hike back to our subway, oh and those pesky travellators again.  It ended up taking 40 mins to get back to the apartment and we spent that entire time walking or on a moving (very crowded metro). Luckily Miss A had a shower and happily went to sleep without much fuss and we rested our weary legs from much walking and many, many steps.