Blog by both Nic and Anto……

In Bruges…… just like the movie (of the same name), but without all the chasing around and killing……. if you haven’t seen the movie I’m referring to, then you won’t understand but it’s a good watch (and set in Bruges).

We all enjoyed our comfy room at the B& B and Astrid did wake a bit before 7am, which was annoying but not unexpected. We had booked our breaky for 8am so we pottered around and had yet more showers in the enormous shower before heading to breakfast, downstairs.  Luckily we were the only guests eating at that hour, which allowed Astrid to be loud and annoying without disturbing anyone. We had a gorgeous breakfast of cereals, breads, toasts, jams, cheeses, meats, yoghurt and freshly cooked eggs. It was all delightful and in a lovely room overlooking the B&B garden. Full of food and coffee we rugged up and headed into the crisp Bruges morning.

It wasn’t the coldest we’ve been, but it was very, very fresh. Probably only just above zero. We had the usual battle with Astrid about mittens but we had her in the snowsuit so at least most of her was staying warm. She would take the mittens off and get really upset when her hands were getting cold. Our hands were freezing through gloves, so I’m not surprised.

We decided to take a different walking route and see some of the parts of Bruges we hadn’t yet seen. It was a beautiful still morning and the canals were just gorgeous. The old buildings were lovely and frosty and all the Christmas decorations up made everything very festive. We managed to see a few different churches and quite a few of the canals we hadn’t seen the previous day.  We also managed to find our obligatory European white swans that we seem to find in every city we visit. 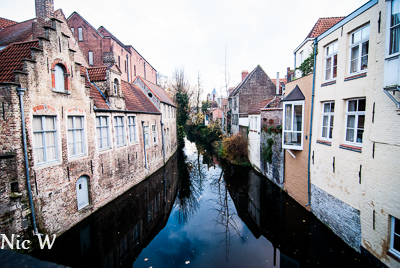 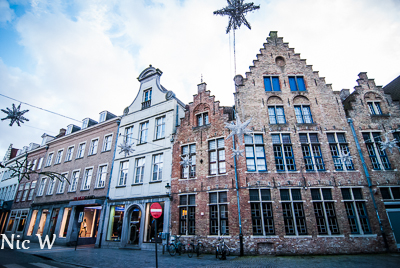 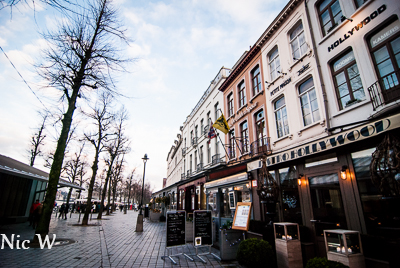 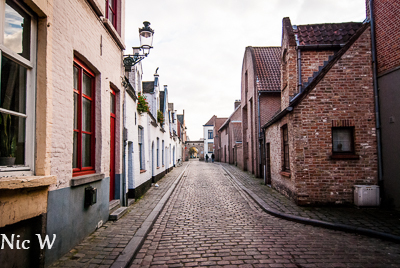 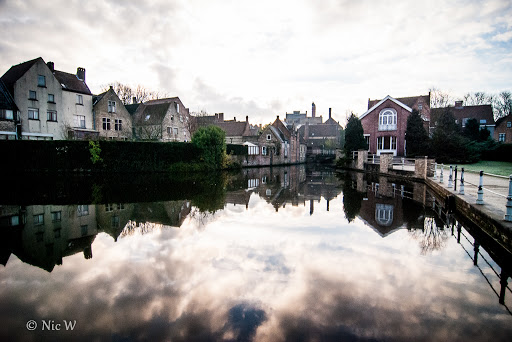 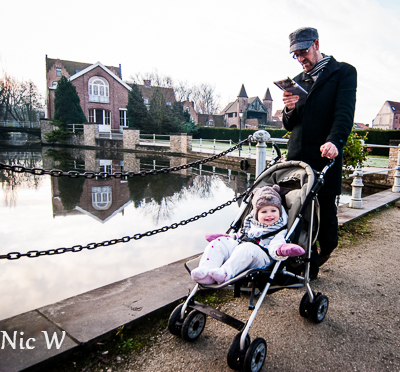 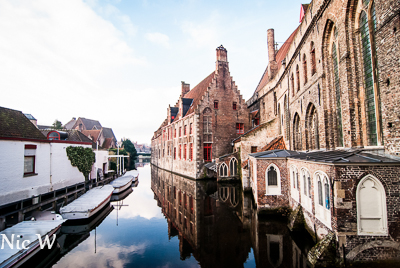 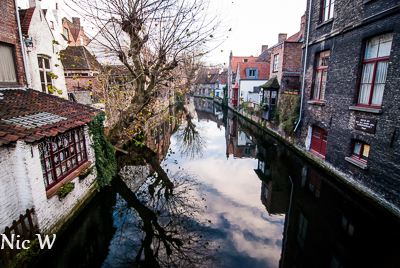 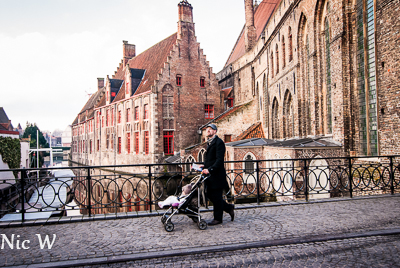 We amused Astrid with watching the horses and carriages that would regularly come clip-clopping past. It was tempting to take her on a ride but it was pretty expensive and it was so cold that we weren’t sure she would enjoy it.  If they did a 10 minute version rather than the 30 minute rides we would have been more keen. It was fun watching them gallop around the city squares though.  Obviously it was a good day for horses as they were all lined up in the Markt ready to go, far more than we had seen the previous day. 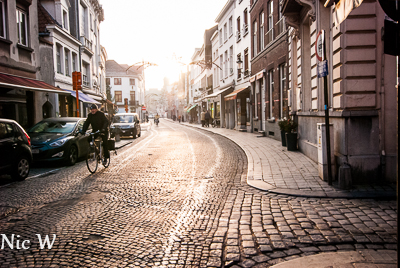 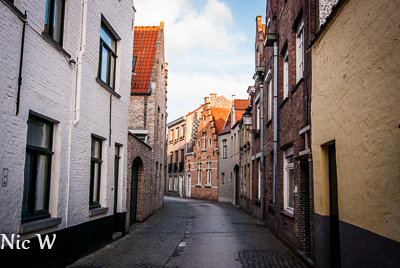 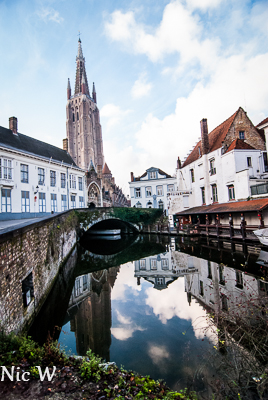 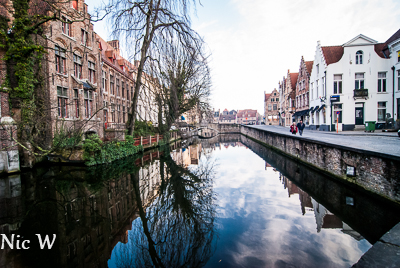 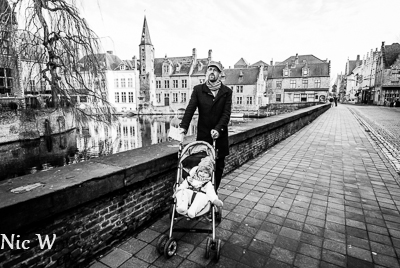 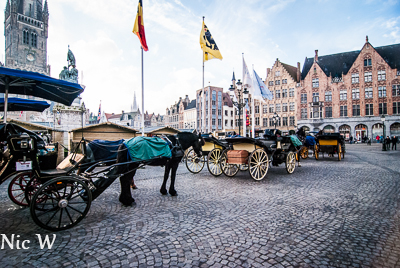 We had seen many chocolate shops of interest, some the same as Brussels so we were more keen on seeing the more local artisan versions.  So much lovely hand made chocolate and much of it at reasonable prices, but our bags are over flowing with chocolate already so we didn’t buy too much. We found lovely take away hot chocolates from one of the shops and enjoyed that while walking around the chilly streets. A perfect way to warm up.  Astrid is devoted to chocolate (pretty much like her dad) and everywhere we walk she cries ‘choc, choc, choc’, so hard for her to understand why she can’t eat all of them! 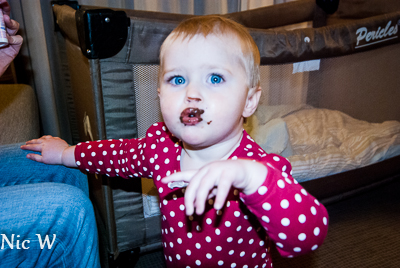 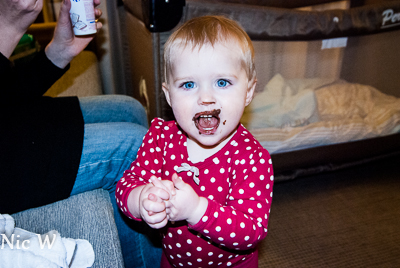 After a little more walking we were getting cold and it was close to our checkout time so we had a scenic walk back to our B&B and bid them farewell. A fabulous place to stay and we wish we could have stayed longer.  This time we decided to catch the bus from the end of the street that conveniently took us straight to the train station. Much better than the 20+ minute walk rolling bags. We also managed to find a train going to Ghent only minutes after we arrived at the train station.  Sadly it was an inter-regional train rather than the inter-city and we didn’t realise this meant it took twice as long.

We boarded the pretty much empty train. Astrid was getting grumpy as it was sleep time, so it was for the best that there wasn’t anyone around for her to annoy. Our bags also took up a sizable portion of the carriage so it being empty was a double bonus. We seemed to stop at every town between Bruges and Ghent, so it wasn’t a quick journey (just under an hour) but we did get to see some nice looking towns and countryside on our travels.  Once in Ghent we discovered the train station was lacking lifts and escalators so we had to negotiate steps which was an annoyance with all the gear.  Finally out of the train station we located the trams and made our way onto the first available tram heading to the central station (the trains inconveniently stop at the train station outside the main city area, and we weren’t keen on a 3km walk with bags in the freezing cold). The tram was quite efficient and our first impression of Ghent was that it wasn’t as small as we first thought. We had thought it smaller than Bruges but it seemed to have quite a lot of shopping strips and we knew it had a huge university population so it is a reasonable size. It has a population of 600,000 and covers an area of 1,200 square kilometres and is the fourth largest city in Belgium, so not the small town we had imagined!

Once off the train it was about 150 metre walk to our hotel, bonus!  And then the day went pear shaped……… We were checking into the hotel and we couldn’t find our passports. Anto then realised he had left them in the drawer at the Bruges B&B.  We seem to have absolutely no luck with passports this trip and the tireder we get the more silly things we are doing.  Totally exhausted and annoyed with ourselves we didn’t have any options but to go back and get them.  We contacted the B&B owner to alert her to what had happened and in the meantime went and got some lunch as we were all tired and hungry. At this point Anto couldn’t find his hat and scarf and we wondered where we left them…….. only to open our hotel door to find them sitting on top of our bags, that were still in the corridor and had been there for half an hour. Told you we were tired, we didn’t even realise we had left our bags in the corridor!

Astrid was in desperate need of both food and sleep but her cot was not in the room when we checked in, so we elected to try and solve the food problem. Luckily, immediately outside our hotel were a stack of food options. We chose a ‘lunch house’ that offered reasonable options and Anto got a tasty beef stew cooked in a local stout like beer, which came with chips. He declared it delicious. Astrid had a croque monsieur which she didn’t eat a great deal of (despite normally loving) so I ate her salad. I had tried to order waffles but they seemed unwilling to give me dessert with main course so I had to wait. Annoying when we were in a hurry.  I did finally get my waffles, which were deliciously covered in lovely vanilla icecream and freshly melted chocolate. Astrid and Anto snaffled a reasonable ‘tasting’ of them and I think they were the best waffles I’ve had yet.  Sadly no photos of today’s food as we were too distracted by the passport issue to remember.

Back to the hotel and they had helpfully put a fold out bed in our room instead of a cot. Unable to quickly rectify the problem I managed to get Astrid to sleep on our bed with only about 10 minutes of resistance. Given it was already mid-afternoon I was hopeful she would get some rest so we could make something of the day.  The cot finally arrived and was installed without waking the sleeping lion and Anto headed back to Bruges while I stayed with the tired one.

Anto’s outing while held at high speeds, was fairly dull and boring – in Belgium they have a fully integrated public transport system, the Belgian rail website lets you search based on addresses and calculates all the connections for you – it makes it really easy, but takes the fear & surprise factors our of the equation. Having learnt our lesson with the regional train I found the express back to Bruges. 26 odd minutes later I was deposited at the platform, called our incredibly helpful host who had helpfully offered to drop by the station with all our precious documents – about 5 minutes later she showed up on a bike, in the almost sleet like snow. While I was waiting I watched the line for the ice magic ice sculpture show – and noticed that although it was -6C inside the show the people outside didn’t need to change their attire on the way through because with the wind chill it was probably about the same temperature outside. Once the documents were safely locked away it was a simple matter to wander back to the train station walk onto the waiting train and be whisked back to where I started from expecting to hear stories of all the fun the girls had been up to…..

Astrid had a good 1.5 hour sleep and I had planned to go for a short walk outside for some sight seeing while waiting for Anto to return. Once out it was very, very cold and despite being rugged up she wasn’t very happy about it. Every time she took her mittens off she screamed so we did a quick lap around our vicinity and saw the Belfort tower and some other impressive buildings lit up in the approaching twilight (and near snow like conditions) before heading back to the hotel where we could both warm up. Anto returned from Bruges, with passports and we debated dinner options.  We decided to abandon sightseeing for the day. It was now raining (and probably snowing) out and everyone was tired so we went for the supermarket dinner option as going out seemed like a bad idea. Astrid was tired and I wasn’t feeling well and we all wanted an early night. Anto procured some bread, meat, butter, cheese and salad for us and we had a picnic on our hotel room floor.  The adults got wine and chips for dessert………. lets just say that it is currently 9pm and the small child is still not willing to sleep (waaaay overtired and being a little petulant) so we are sitting in the foyer of our room ignoring her and drinking wine.

Edited to add that she did *eventually* go to sleep but it was way too late and quite a lot of wine was needed to cope with the day that was had!